×
What are you looking for?
See all results
Monuments and memorials in Ur Junction

Its remains were excavated in the 1920s to 1930s by Sir Leonard Woolley. They were encased by a partial reconstruction of the facade and the monumental staircase by Saddam Hussein during the 1980s. The ziggurat of Ur is the best preserved of those known from Iran and Iraq.[citation needed] It is one of three well-preserved structures of the Neo-Sumerian city of Ur, alongside the Royal Mausolea and the Palace of Ur-Nammu (the E-hursag).

The ziggurat was built by Ur-Nammu in approximately the 21st century BC (short chronology) during the Third Dynasty of Ur. The massive step pyramid measured 210 feet (64m) in length, 150 feet (46m) in width and over 100 feet (30m) in height. The height is speculative, as only the foundations of the Sumerian ziggurat have survived.

The ziggurat was a piece in a temple complex that served as an administrative center for the city, and which was a shrine of the moon god Nanna, the patron deity of Ur.

The construction of the ziggurat was finished in the 21st century BC by King Shulgi, who, in order to win the allegiance of cities, proclaimed himself a god. During his 48-year reign, the city of Ur grew to be the capital of a state controlling much of Mesopotamia.

King Nabonidus, the last king of the Neo-Babylonian Empire in the 6th century BC, after "finding little left but the last stage and nothing to guide him as to the monument's original appearance", had it restored in seven stages rather than three.

U.S. Soldiers climb the steps of the ziggurat in 2010

The remains of the ziggurat were first described by William Kennett Loftus in the early 19th century. The first excavations at the site were conducted by John George Taylor (mistakenly credited as "J. E. Taylor") in the 1850s, leading to the identification of the site as Ur. After World War I, preliminary excavations were performed by Reginald Campbell Thomson and Henry Hall. The site was extensively excavated in the 1920s by Sir Leonard Woolley by appointment of the University Museum of the University of Pennsylvania and the British Museum in the period of 1922 to 1934.

The remains of the ziggurat consist of a three-layered solid mass of mud brick faced with burnt bricks set in bitumen. The lowest layer corresponds to the original construction of Ur-Nammu, while the two upper layers are part of the Neo-Babylonian restorations. The façade of the lowest level and the monumental staircase were rebuilt under the orders of Saddam Hussein.

The ziggurat was damaged in the First Gulf War in 1991 by small arms fire and the structure was shaken by explosions. Four bomb craters can be seen nearby and the walls of the ziggurat are marred by over 400 bullet holes.

Tips & Hints
Arrange By:
Popular first New first
There are no tips nor hints for Ziggurat of Ur yet. Maybe be you will be the first one to post useful information for fellow travellers? :)

The Ziggurat — Ur Ancient City on Foursquare

Lagash (modern Tell al-Hiba, Iraq) is located northwest of the 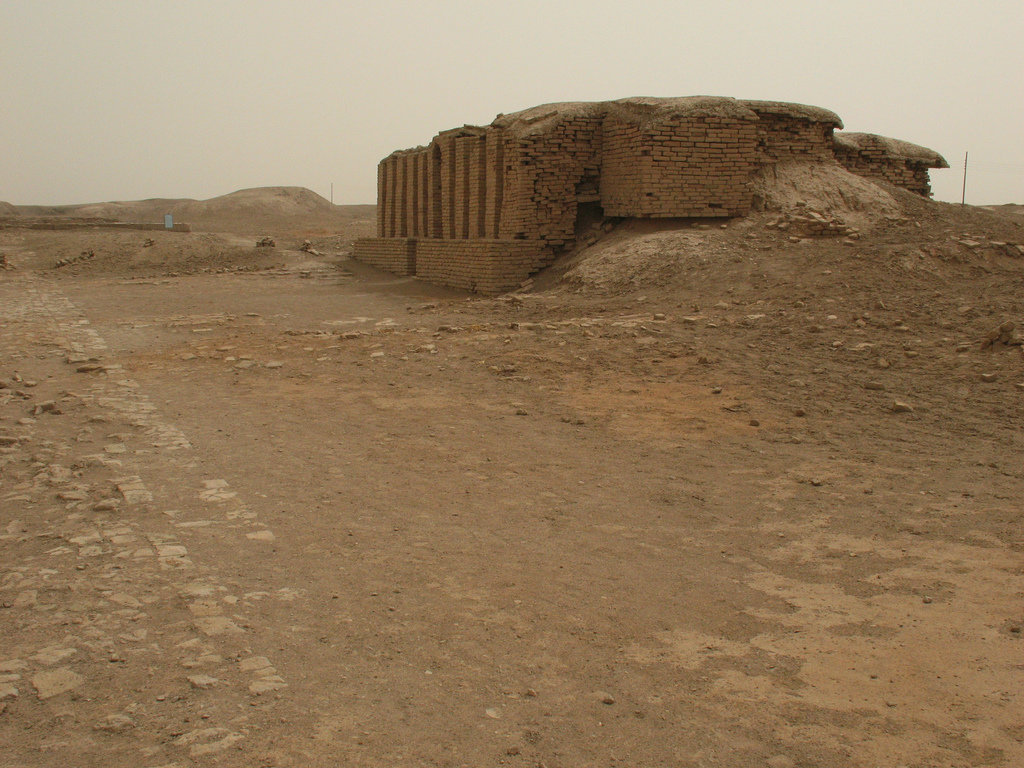