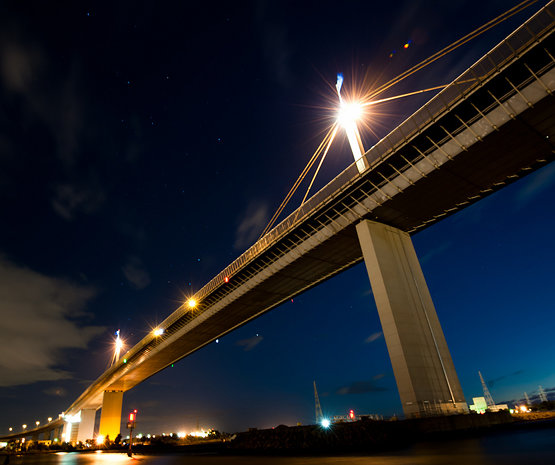 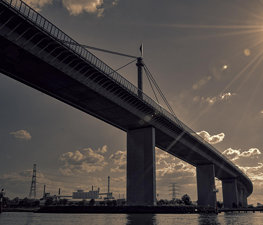 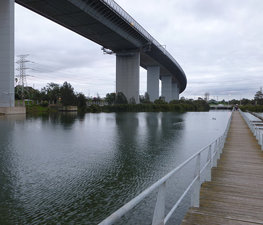 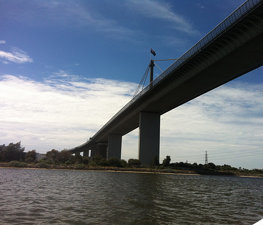 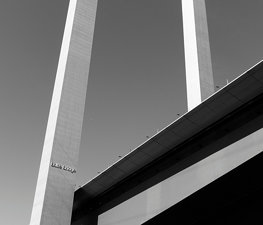 The West Gate Bridge is a cable-stayed bridge in Melbourne, Victoria, Australia. It spans the Yarra River, just north of its mouth into Port Phillip Bay, and is a vital link between the inner city and Melbourne's western suburbs with the industrial suburbs in the west and with the city of Geelong, 80 kilometres (50 mi) to the south-west.

The main river span is 336 metres (1,102 ft) in length, and the height above the water is 58 metres. The total length of the bridge is 2,582.6 metres (8,473.1 ft). It is the third longest in Australia behind the Houghton Highway and the Hornibrook Bridge, and is twice as long as the Sydney Harbour Bridge.

The bridge passes over Westgate Park, a large environmental and recreational reserve created during the bridge's construction.

The bridge was originally tolled. Tolls were abolished in 1985, because drivers were using other routes to avoid the toll.

Cycling and the Westgate

Cyclists are prohibited from using the bridge except for special bicycle events, notably the "MS Summer cycle" which is a fundraising event for multiple sclerosis and the "Around the bay in a day" Bicycle Victoria event that raises money for the charity The Smith Family. The Westgate Punt is a ferry that runs directly below the bridge taking cyclists and pedestrians across the Yarra between a jetty at Fisherman's Bend near Westgate Park - Bayside Trail and a jetty adjacent to Scienceworks Museum - Hobsons Bay Coastal Trail. Operating only on weekends and public holidays, 10:00 a.m. to 5:00 p.m. on demand.

Two years into construction of the bridge, at 11.50 am on 15 October 1970, tragedy struck. The 112 metre (367.5 ft) span between piers 10 and 11 collapsed and fell 50 metres (164 ft) to the ground and water below. Thirty-five construction workers were killed. Many of those who perished were on lunch break beneath the structure in workers' huts, which were crushed by the falling span. Others were working on and inside the girder when it fell. The whole 2,000-tonne mass plummeted into the Yarra River mud with an explosion of gas, dust and mangled metal that shook buildings hundreds of metres away. Homes were spattered with flying mud. The roar of the impact, the explosion, and the fire that followed, could be clearly heard over 20km away. A West Gate Bridge Memorial to workers who lost their lives is located near the bridge. On the following morning, October 16, Sir Henry Bolte (Premier of Victoria) announced that a Royal Commission would be set up immediately to look into the cause of the disaster. The Prime Minister, Mr. John Gorton, said: "I am sure the whole of Australia is shocked and saddened by the serious accident at West Gate Bridge. Please extend my deepest sympathy to all those families to whom this tragic event has brought such grief."

Royal Commission into the collapse was established, and concluded on 14 July 1971. It attributed the failure of the bridge to two causes; the structural design by designers Freeman Fox & Partners and an unusual method of erection by World Services and Construction, the original contractors of the project.

On the day of the collapse there was a difference in camber of 11.4 centimetres (4.5 in) between two half girders at the west end of the span which needed to be joined. It was proposed that the higher one be weighted down with 10 concrete blocks, each 8 tonnes (11 t), which were located on site. The weight of these blocks caused the span to buckle, which was a sign of structural failure. The longitudinal joining of the half girders was partially complete when orders came through to remove the buckle. As the bolts were removed the bridge snapped back and the span collapsed.

Construction resumed in 1972, with the bridge being completed in 1978. After 10 years of construction, the bridge, a part of the larger West Gate Freeway, cost $202 million.

In 2003 speed cameras were erected on the bridge, but were not activated until September 2005, because of issues with similar camera on the Western Ring Road. In 2006 the State Government spent $1.3 million on erecting railway style boom barriers at each entrance to the bridge to block traffic in the event of a terrorist attack. In March 2007 the State Government announced that two flagpoles would be erected atop the main bridge pylons, to fly the Australian and Victorian flags, each being 10 metres by 5 metres in size and 135m above sea level. Costing $350,000 to install and $15,000 a year to maintain, the flags were unfurled on September 24, 2008.

Strong growth in suburbs along the route, and increased freight through the Port of Melbourne, means that the corridor is experiencing traffic congestion during peak periods, is vulnerable to short term interruptions and is rapidly approaching capacity. Proposals to abate congestion by allowing more traffic have included bridge widening, a tunnel underneath the river, or adding a second deck to the bridge. Many such plans have come under fire from community groups such as the Public Transport Users Association and Environment Victoria advocating investment in alternative forms of transport.

A private sector report made public in February 2006 report suggested building a companion tunnel to the West Gate Bridge under the Yarra River. Made up of three separate bores to carry traffic in either direction and a freight rail line, the portals would have been north of Williamstown Road in Port Melbourne, and between Blackshaws and Melbourne roads in Altona North.

On 17 May 2006, the State Government as port of their Meeting Our Transport Challenges plan announced plans to change traffic flow in peak periods on the West Gate Bridge and approaches to it, using a reversible lane to provide five traffic lanes in the peak direction, opposing traffic having three lanes. This was to be done using overhead signals and barriers and the State Government allocated funds to this project in its 2006–2007 state budget,[] but the works were never carried out, the idea being dropped in 2008.

On 5 August 2007 it was reported that the Victorian Government was planning a $240 million project to identify and eliminate structural weaknesses in the bridge, with specific concerns including crash barriers, cracking, corrosion and potential buckling. News of the work was prompted by the collapse of the I-35W Mississippi River bridge in Minneapolis, Minnesota, United States. Experts were reported as saying the West Gate was initially designed to carry loads of 25 tonnes but now carried B-double trucks weighing up to 68 tonnes. The bridge was built to carry 40,000 vehicles a day, but volumes are now more than four times the original amount, approximately 160,000 vehicles on an average day.

The State Government also assessed options for the development of another east-west link in 2008. Sir Rod Eddington, former CEO of British Airways and Chairman of the Victorian Major Events Company, will head the assessment of the future East-West connections and recommend the best way forward for public transport, road and freight travel for the entire Monash-West Gate corridor. By December 2008 the State Government announced it was planning for such a link, anticipated to be a three kilometre road tunnel under Footscray and the Maribyrnong River. Linking Dynon and Footscray Roads in the Port of Melbourne precinct to Geelong Road in West Footscray, its cost is estimated at more than $2.5 billion.

Also in 2008 as part of the Victorian Transport Plan it was announced that the bridge would be widened to 5 lanes in each direction, the space being gained by narrowing the existing traffic lanes and closing the emergency lanes, in a move criticised by Victorian fire, police and ambulance unions. Overhead gantries would be used to direct traffic out of lanes when breakdowns and accidents occur. Costed at $240 million, each lane would be 3.1 metres wide, by comparison lanes on the Sydney Harbour Bridge have a width of 2.8 metres. Roads Minister Tim Pallas claimed that the plan would allow the bridge to carry 50 per cent more vehicles, while reducing crashes by 20 per cent. Structural analysis work on the bridge concluded in early 2009 and was completed over a 14-month period. Works to strengthen the bridge commenced in the first half of 2009, with the entire strengthening project scheduled for completion in 2011.

Suicide and other deaths

Police data show up to one suicide happens every three weeks at the West Gate Bridge. A 2004 coroner's report recommended anti-suicide fencing or barriers be erected on the bridge to deter people from taking their lives. In 2008, the bodies of a mother in her late 20s and her 18-month-old baby were found on the river bank below the West Gate Bridge, prompting further calls to erect a suicide barrier.

Those who argue for a suicide barrier claim that most of those who jump from the West Gate Bridge do so through impulse and that police officers who try to save those who try to jump are putting their own lives in danger. There are multiple incidents of police officers dangling off the side of the bridge while holding onto would-be jumpers. A 2000 Royal Melbourne Hospital study on people who jumped from the bridge found at least 62 cases between 1991 and 1998. Seven people survived the 58-metre fall. Seventy-four per cent of those who jumped from the bridge were male, with an average age of 33. More than 70 per cent were suffering from mental illness. Of those who jump off the West Gate Bridge, 31 per cent fell on land. Some of those who land in water drowned afterwards.

In February 2009 the first stage of a temporary suicide barrier was erected, constructed of concrete crash barriers topped with a welded mesh fence. By June that year it has been claimed that the fence has prevented two suicides. Permanent structures will replace them when the M1 upgrade works reach the bridge, the works costed at $20 million.

Melissa Lee
The speed cameras don't work on the bridge as there's too many variables for them to accurately gauge your speed. Don't make this an excuse to drive like an idiot though.

James Panther
Seriously people, when there’s a red X it means you have to get out of that lane!

Sally Broad
Telstra has a cell phone black spot at the top of the bridge!

JACK
At 58m, this is one of the tallest car parks in Australia.

Scienceworks is a world-renowned science museum in Melbourne,

The Bolte Bridge is a large twin Cantilever bridge in Melbourne,

The Southern Star, currently nonoperational, is an observation wheel

Flemington Racecourse is a major horse racing venue located in

The Melbourne Maritime Museum, managed by the National Trust of

St Vincent Gardens in the Melbourne suburb of Albert Park, is an 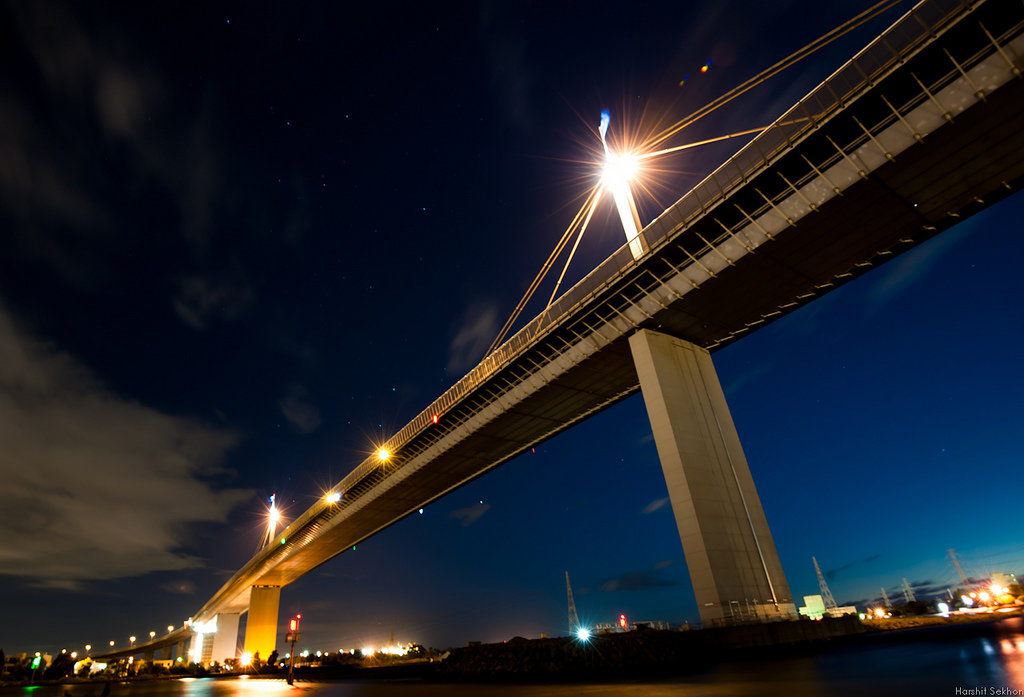 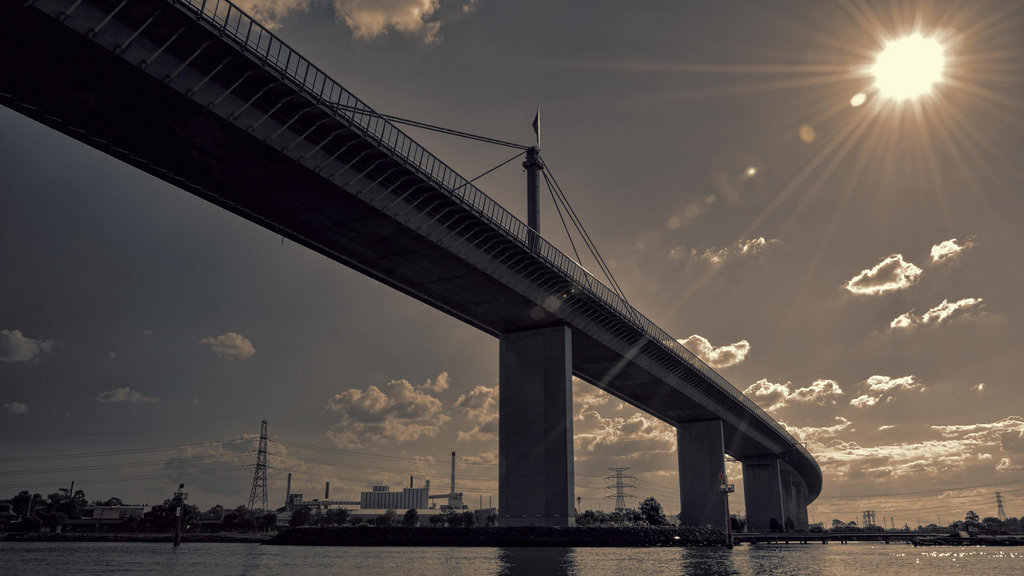 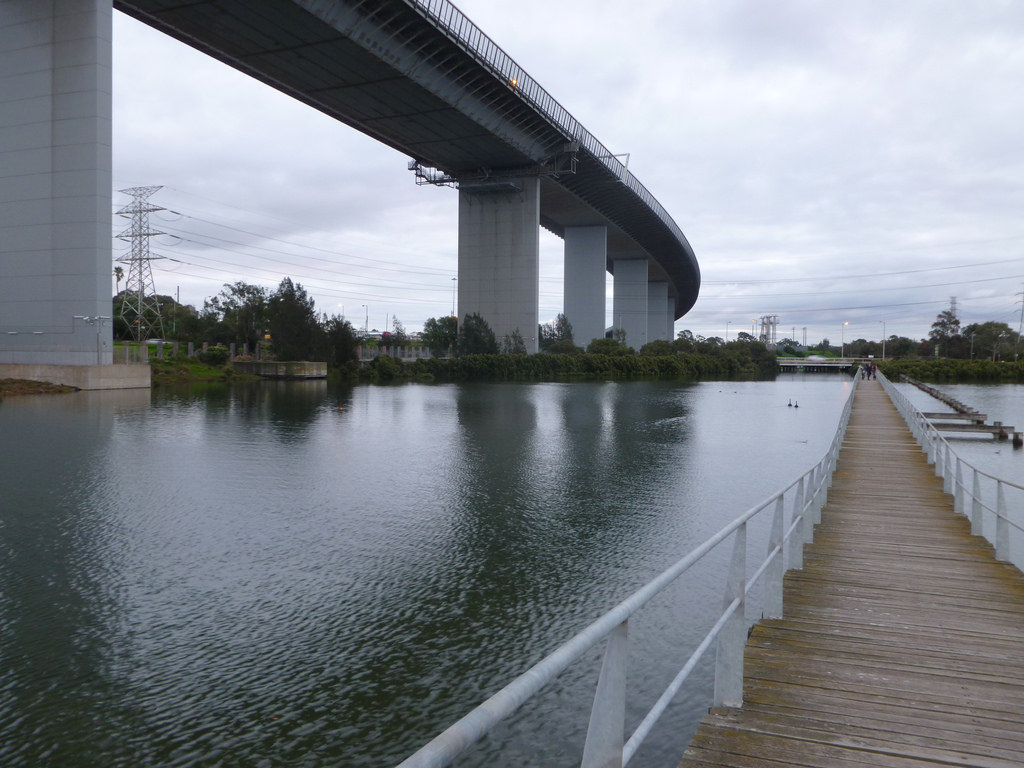 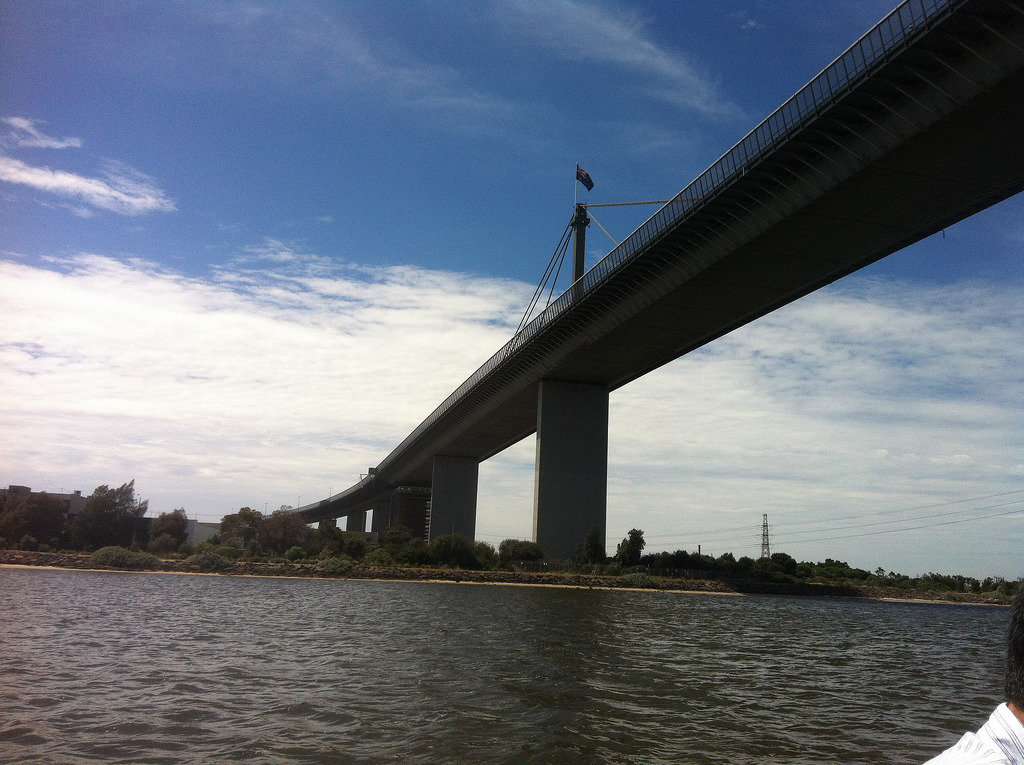 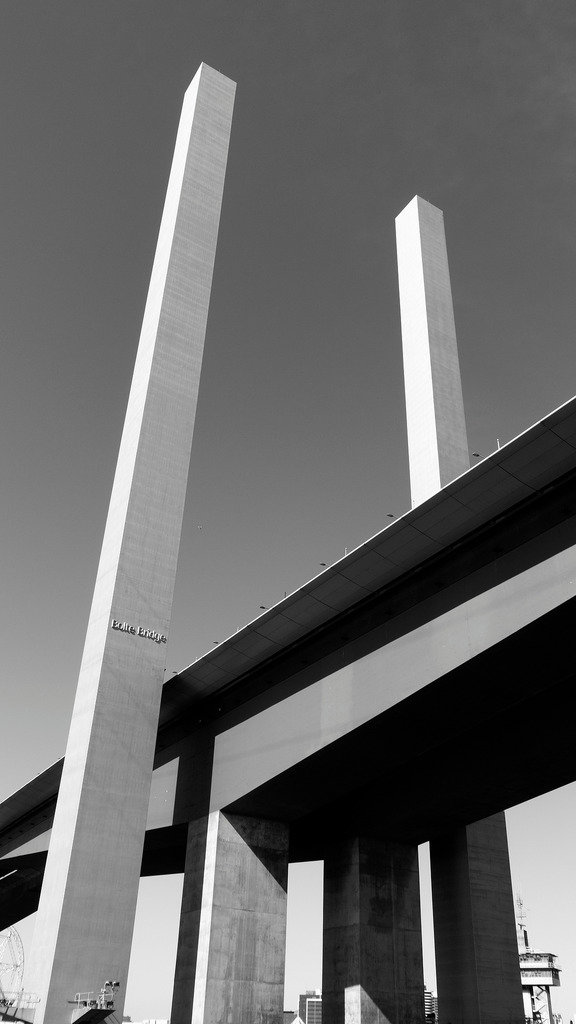 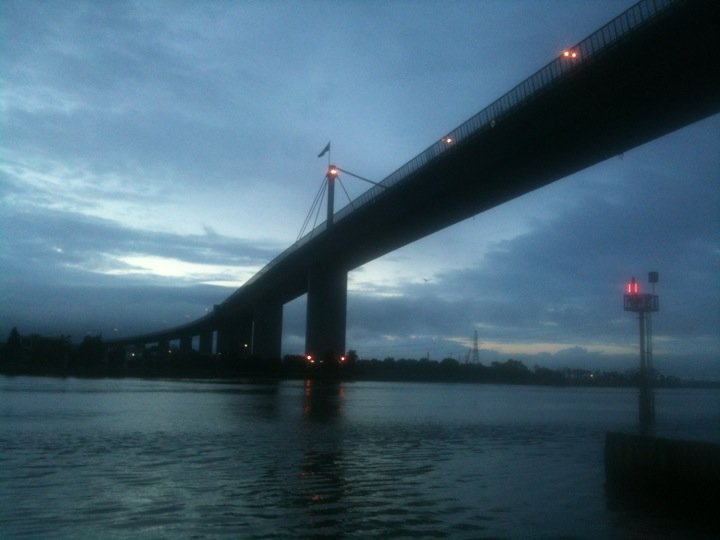