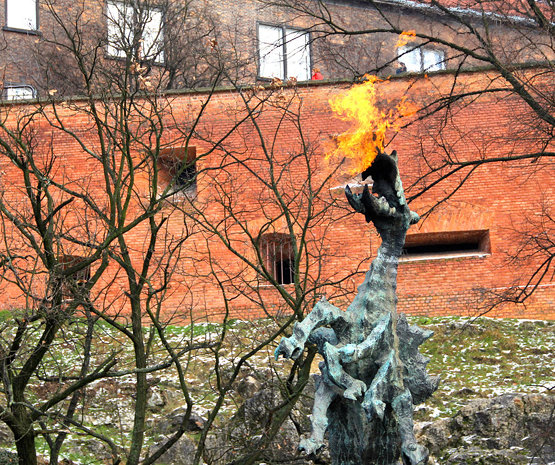 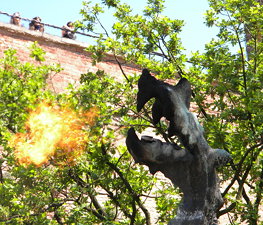 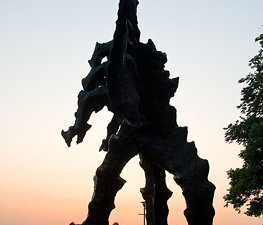 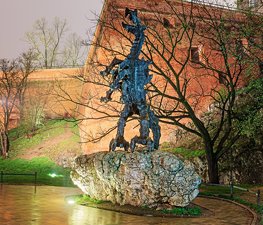 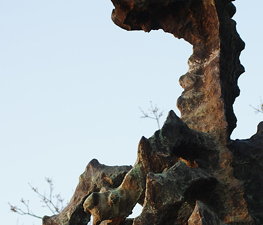 The Wawel Dragon (Polish: Smok Wawelski), also known as the Dragon of Wawel Hill, is a famous dragon in Polish folklore. His lair was in a cave at the foot of Wawel Hill on the bank of the Vistula River. Wawel Hill is in Kraków, which was then the capital of Poland. It was defeated during the rule of Krakus, by his sons according to the earliest account; in a later work, the dragon-slaying is credited to a cobbler named Skuba.

The oldest known telling of the story comes from the 13th-century work attributed to Bishop of Kraków and historian of Poland, Wincenty Kadłubek.

The inspiration for the name of Skuba was probably a church of St. Jacob (pol. Kuba), which was situated near the Wawel Castle. In one of the hagiographic stories about St. Jacob, he defeats a fire-breathing dragon.[]

According to Wincenty Kadłubek's Polish Chronicle, the Wawel dragon appeared during the reign of King Krakus (lat. Gracchus). The dragon required weekly offerings of cattle, if not, humans would have been devoured instead. In the hope of killing the dragon, Krakus called on his two sons, Lech and Krakus II. They could not, however, defeat the creature by hand, so they came up with a trick. They fed him a calf skin stuffed with smoldering sulfur, causing his fiery death. Then the brothers argued about who deserved the honor for slaying the dragon. The older brother killed the younger brother Grakch (Krakus), and told others that the dragon killed him. When Lech became king, his secret was revealed, and he got expelled from the country. The city was named in recognition of the brave and innocent Krakus.

Jan Długosz in his 15th-century chronicle wrote that the one who defeated the dragon was King Krakus, who ordered his men to stuff the flesh of a calf skin with flammable substances (sulfur, tinder, wax, pitch, and tar) and set them on fire. The dragon ate the burning meal and died breathing fire just before death.

Another version by Marcin Bielski from the 16th century gave credit to the shoemaker Skuba for defeating the dragon. The story still takes place in Kraków during the reign of King Krakus, the city's legendary founder, and a calf's skin filled with sulfur was used as bait to the dragon. The dragon was unable to swallow this, and drank water until it died. Afterwards, Skuba was rewarded handsomely. Bielski adds, "One can still see his cave under the castle. It is called the Dragon's Cave (Smocza Jama)"

The most popular, fairytale version of the Wawel Dragon tale takes place in Kraków during the reign of King Krakus, the city's legendary founder. Each day the evil dragon would beat a path of destruction across the countryside, killing the civilians, pillaging their homes, and devouring their livestock. In many versions of the story, the dragon especially enjoyed eating young maidens. Great warriors from near and far fought for the prize and failed. A cobbler's apprentice (named Skuba) accepted the challenge. He stuffed a lamb with sulphur and set it outside the dragon's cave. The dragon ate it and became so thirsty, it turned to the Vistula River and drank until it burst. The cobbler married the King's daughter as promised, and founded the city of Kraków.

Attempts to explain the legend

Legends of the Wawel dragon have similarities with the biblical story about Daniel and the Babylonian dragon. Similar stories are told about Alexander the Great but it is believed that the Krakow story has its own pre-Christian origins.

In addition to attempts to explain the legend of the Wawel Dragon simply as a symbol of evil, there might be some echoes of historical events. According to some historians, the dragon is a symbol of the presence of the Avars on Wawel Hill in the second half of the sixth century, and the victims devoured by the beast symbolise the tribute pulled by them. There are also attempts to interpret the story as a reference to human sacrifices and part of an older, unknown myth.

Wawel Cathedral and Kraków's Wawel Castle stand on Wawel Hill. In front of the entrance to the cathedral, there are bones of Pleistocene creatures hanging on a chain, which were found and carried to the cathedral in medieval times as the remains of a dragon. It is believed that the world will come to its end when the bones will fall on the ground.

The Wawel Cathedral features a statue of the Wawel dragon and a plaque commemorating his defeat by Krakus, a Polish prince who, according to the plaque, founded the city and built his palace over the slain dragon's lair. The dragon's cave below the castle is now a popular tourist stop.

DoubleDeuce
The Kraków dragon that we all love. He's the reason why you see dragon toys all over the place.

Gizem Sncr
Smok is just at the exit of it's den. Come here at night and catch his fire :)

Wawel is an architectural complex erected over many centuries atop a

The Wawel Cathedral, also known as the Cathedral Basilica of Sts.

The Church of St. Andrew in the Old Town district of Kraków, Poland

Urban Light (2008) is a large-scale assemblage sculpture by Chris

The Peter Pan statue is a bronze sculpture of J. M. Barrie's character 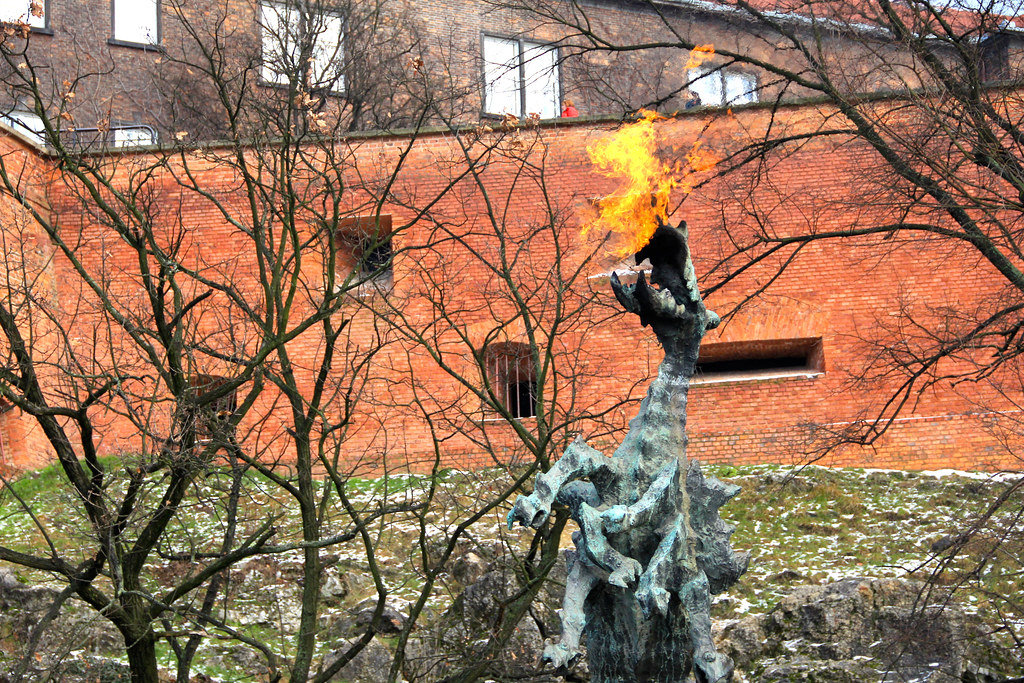 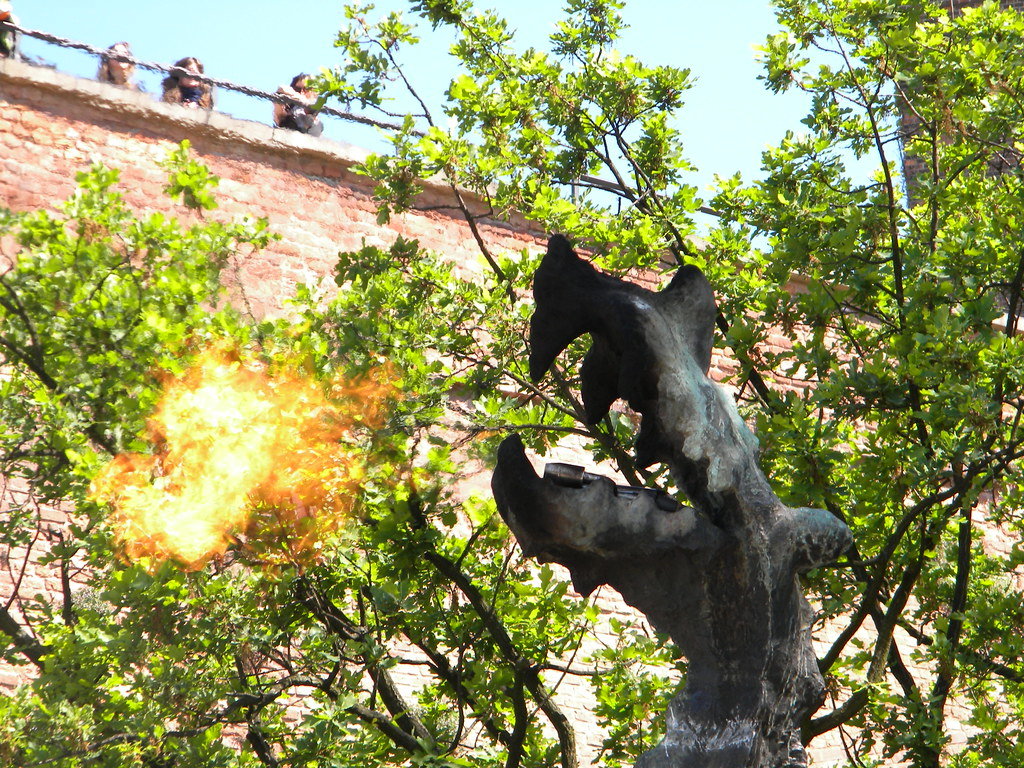 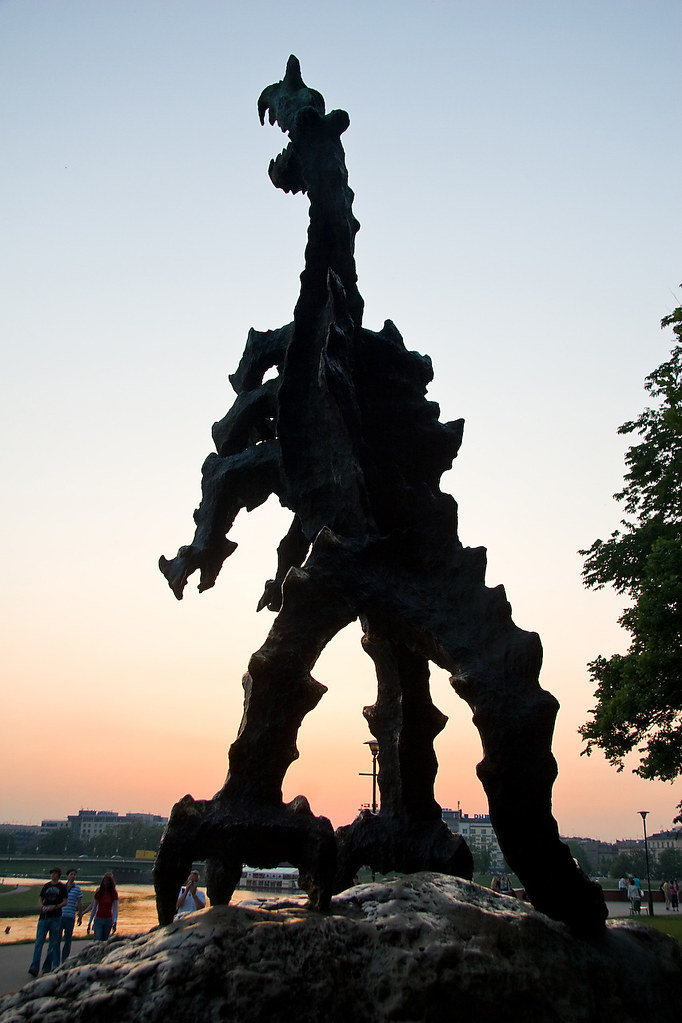 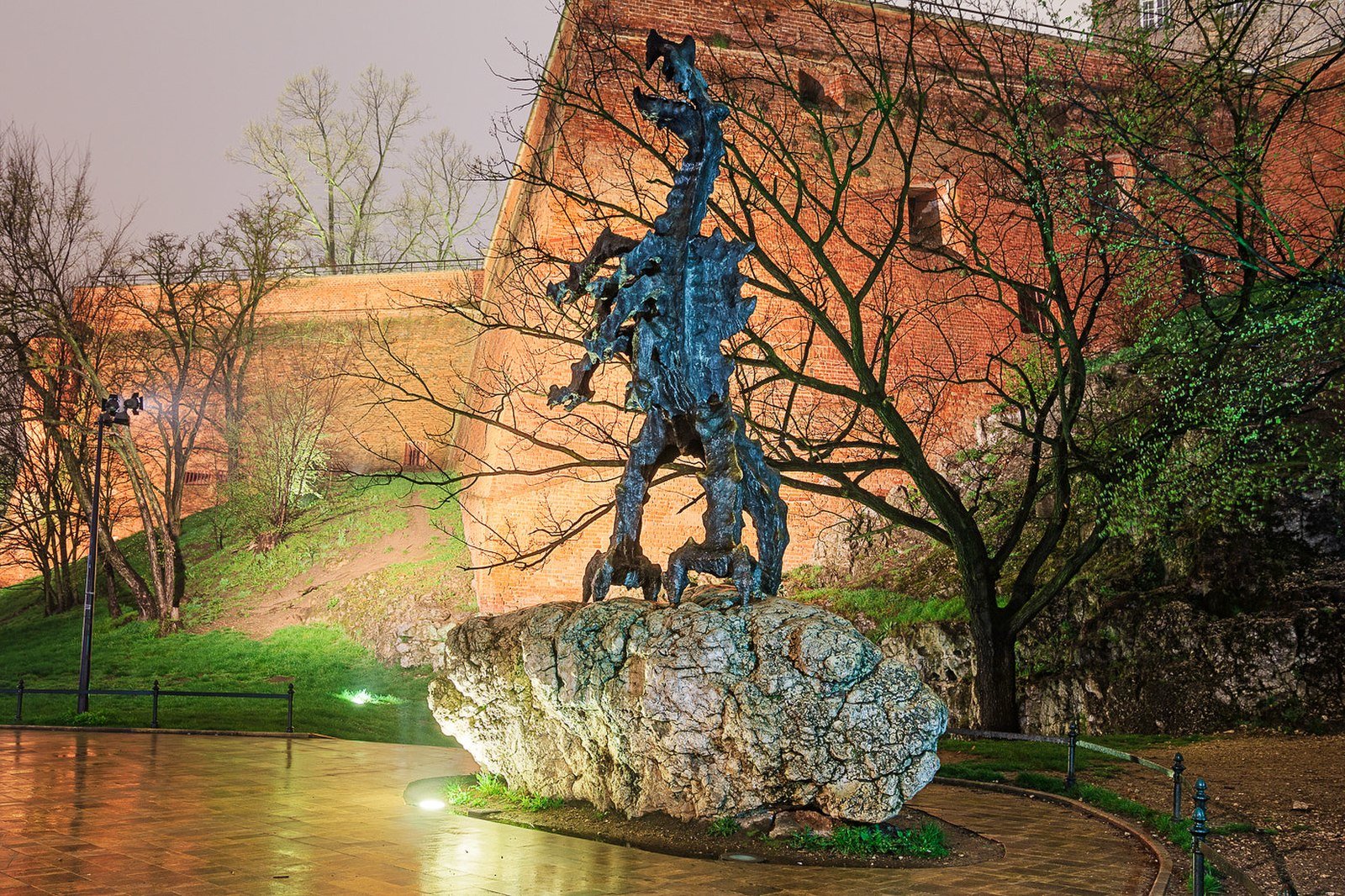 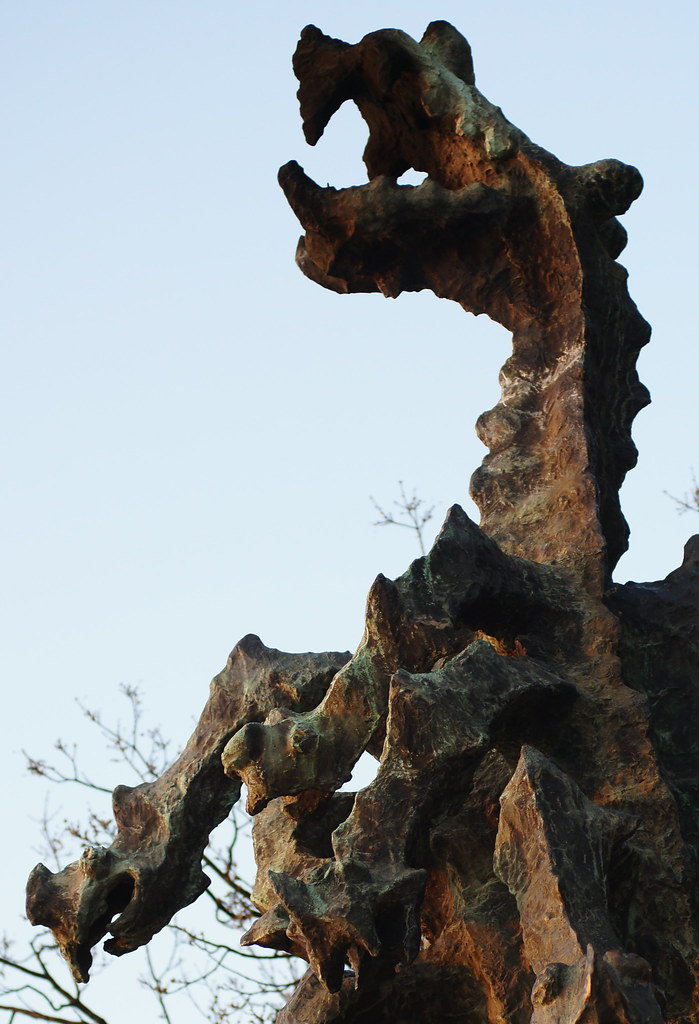 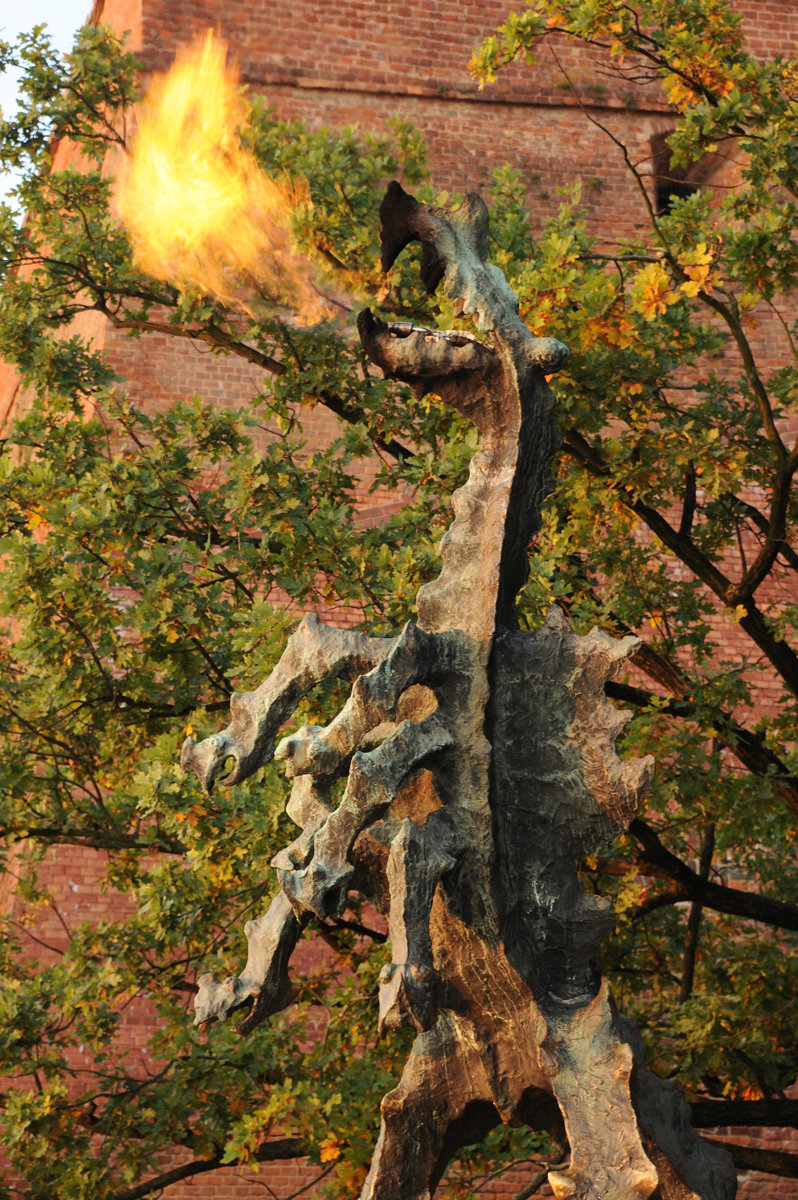 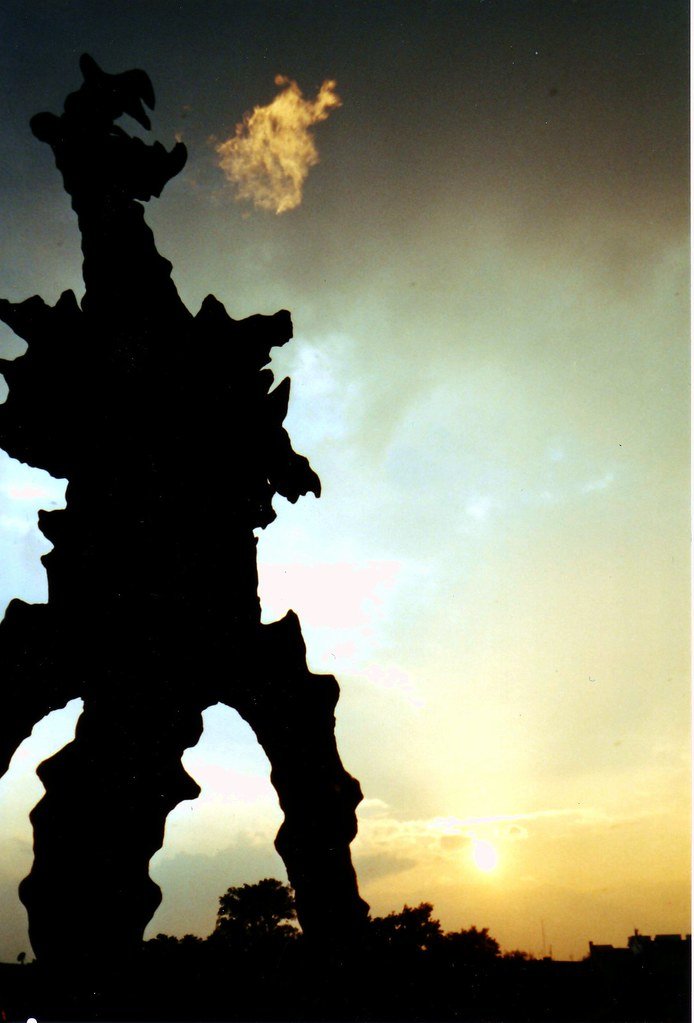 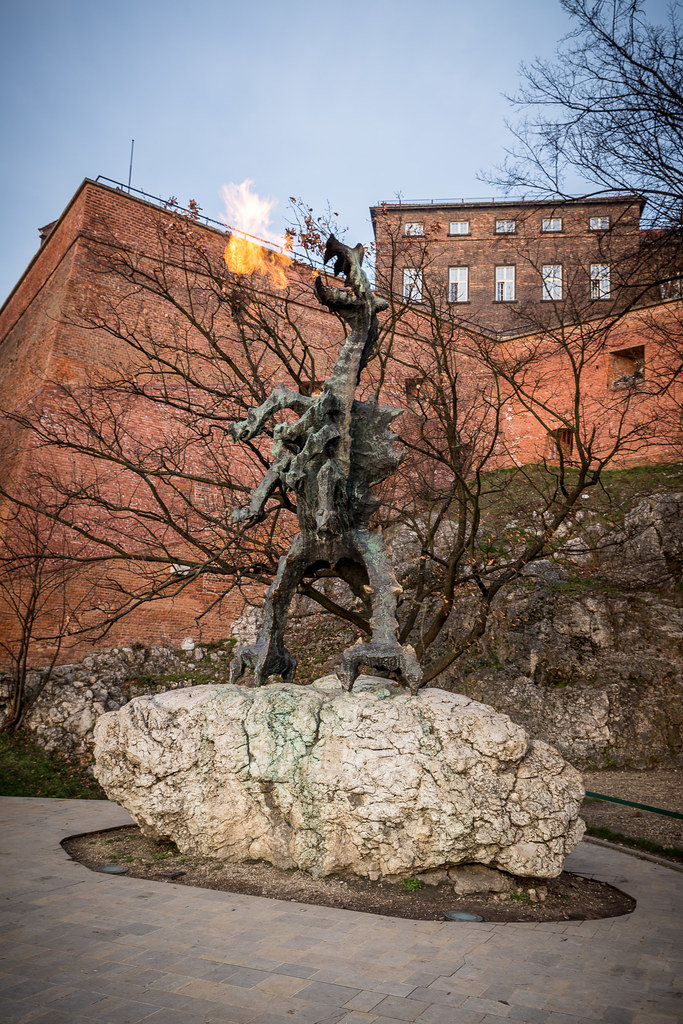 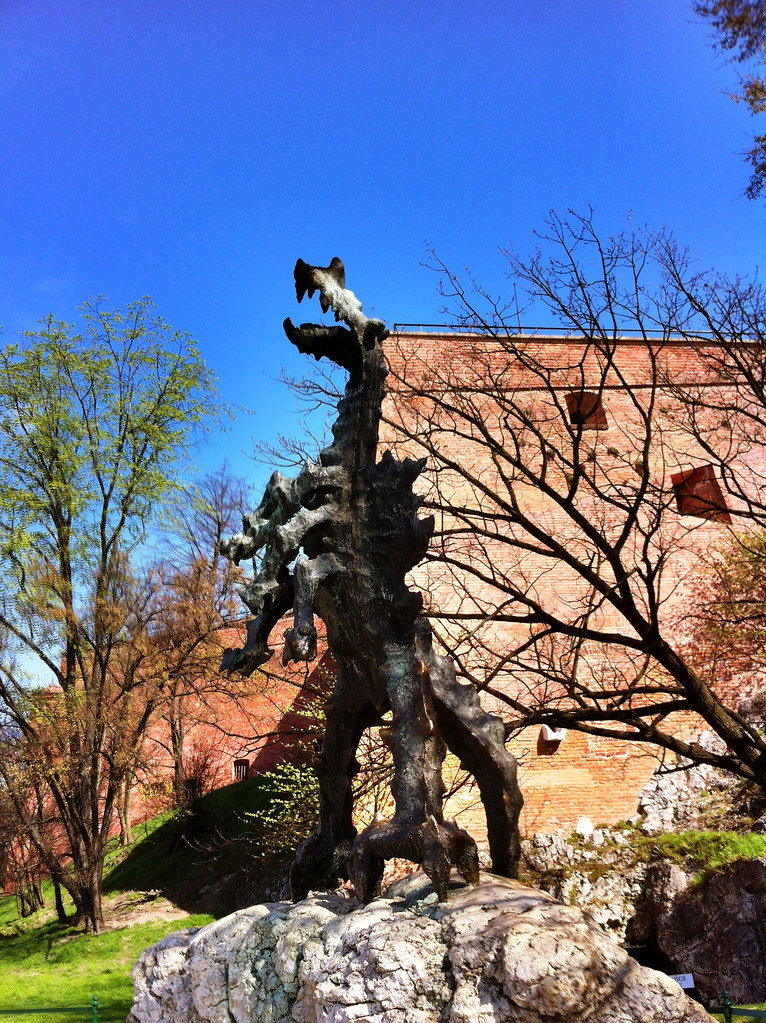 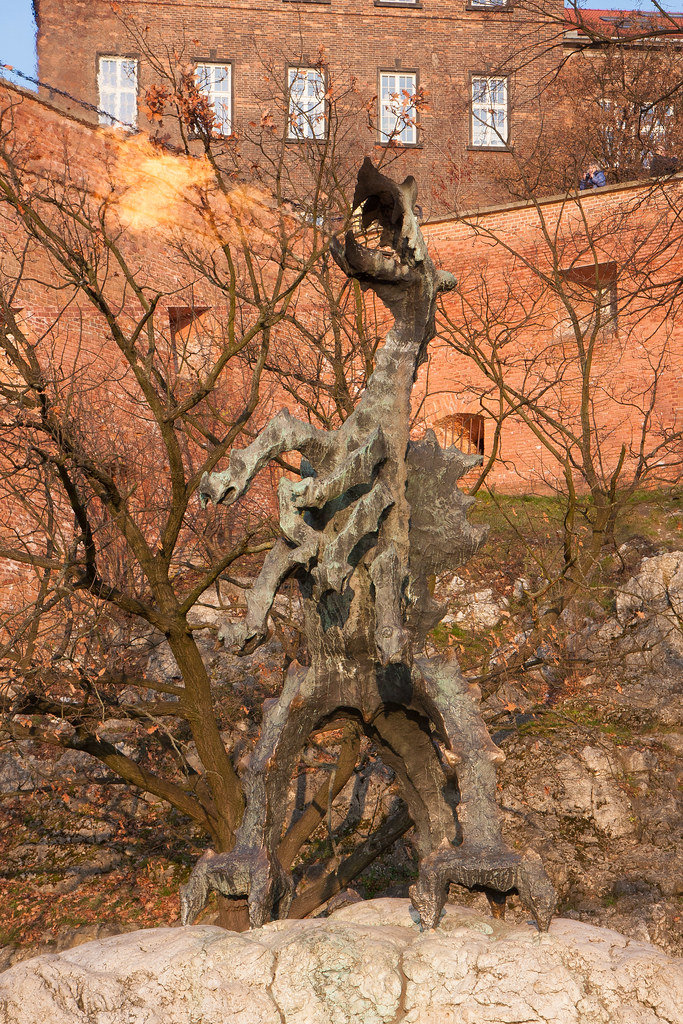 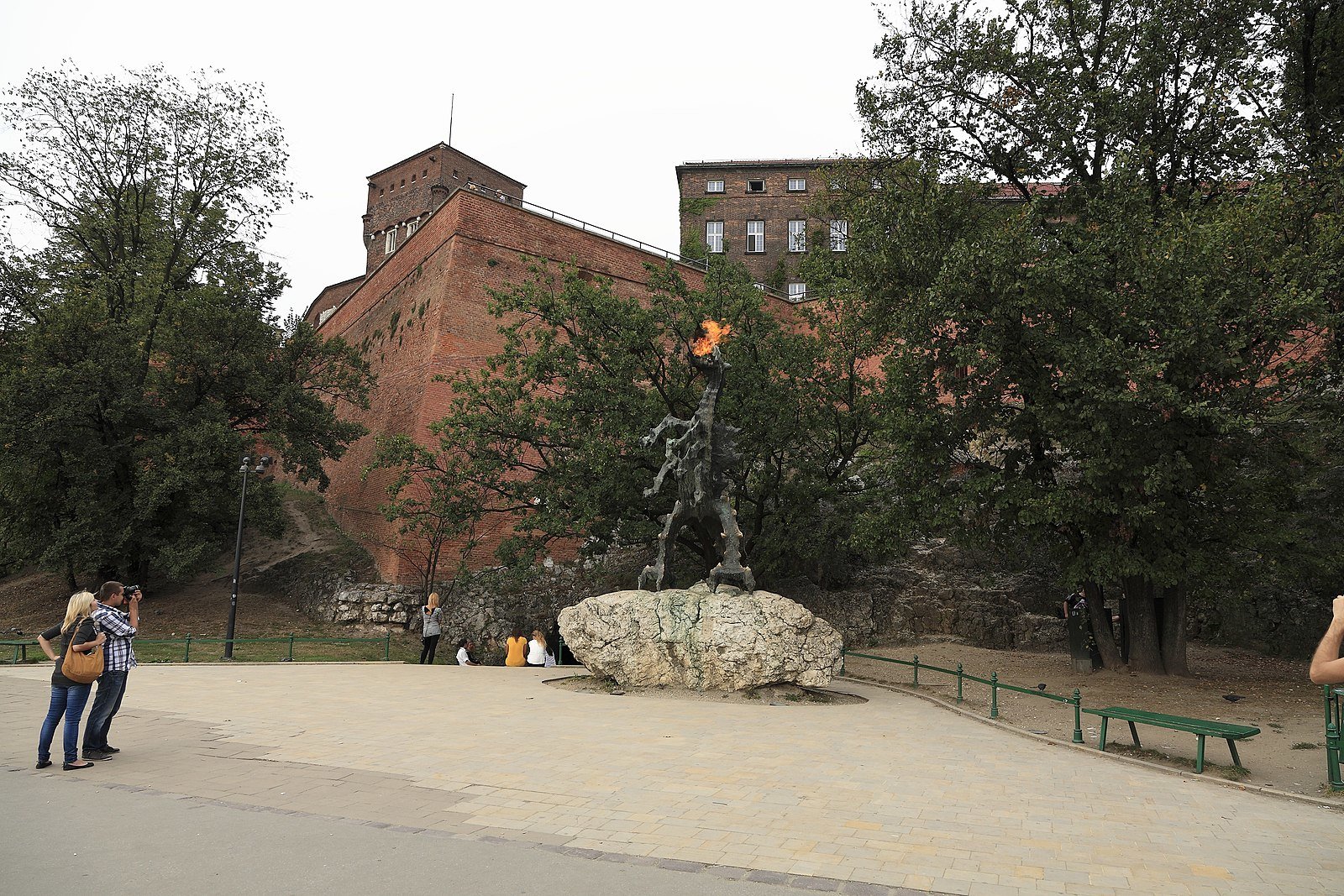 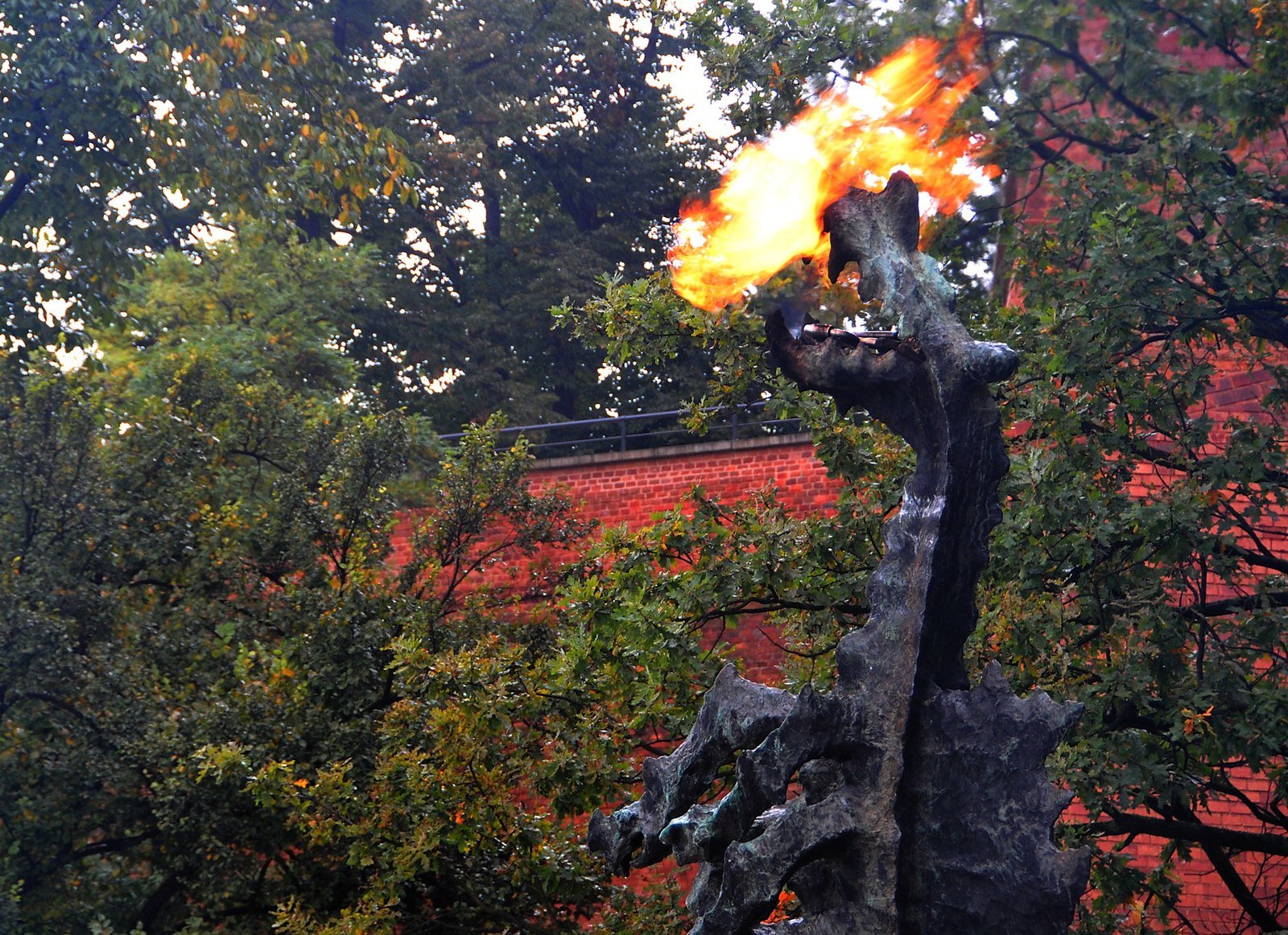 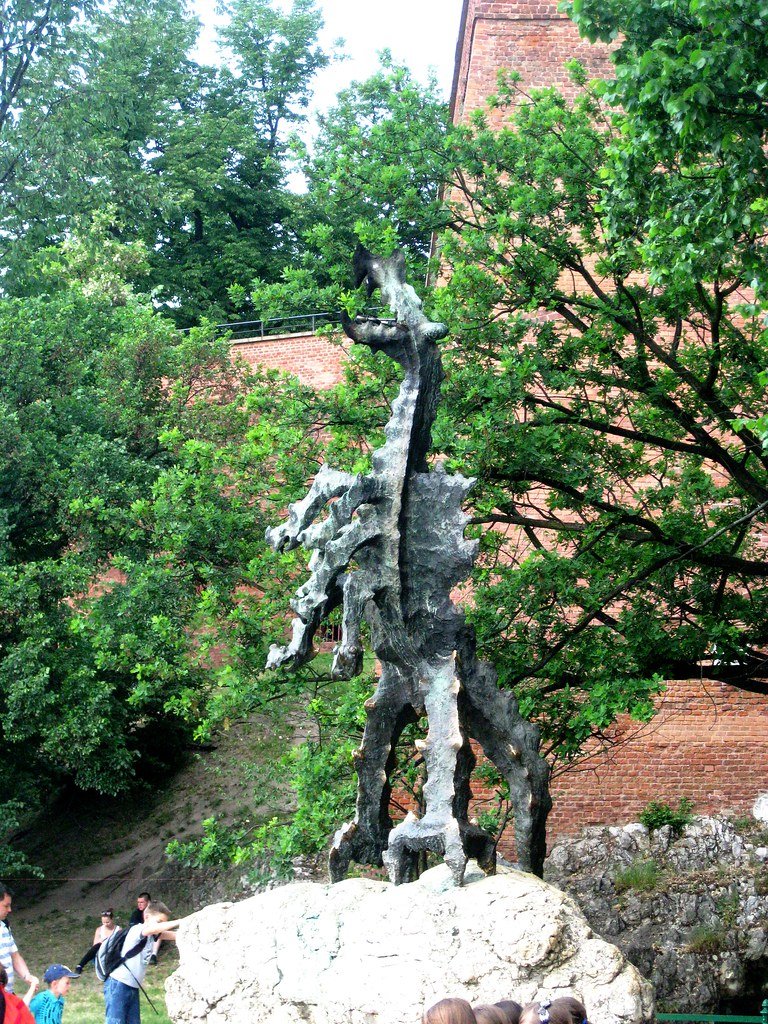 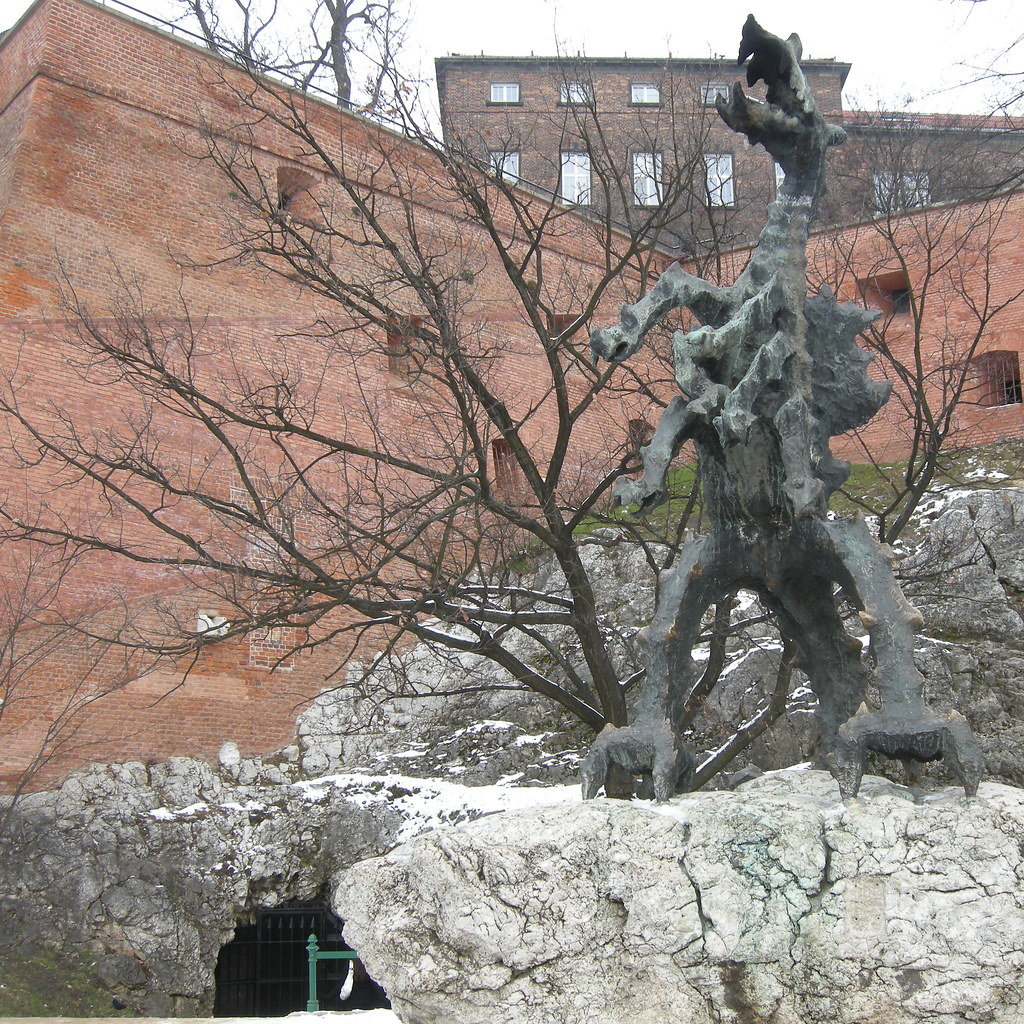 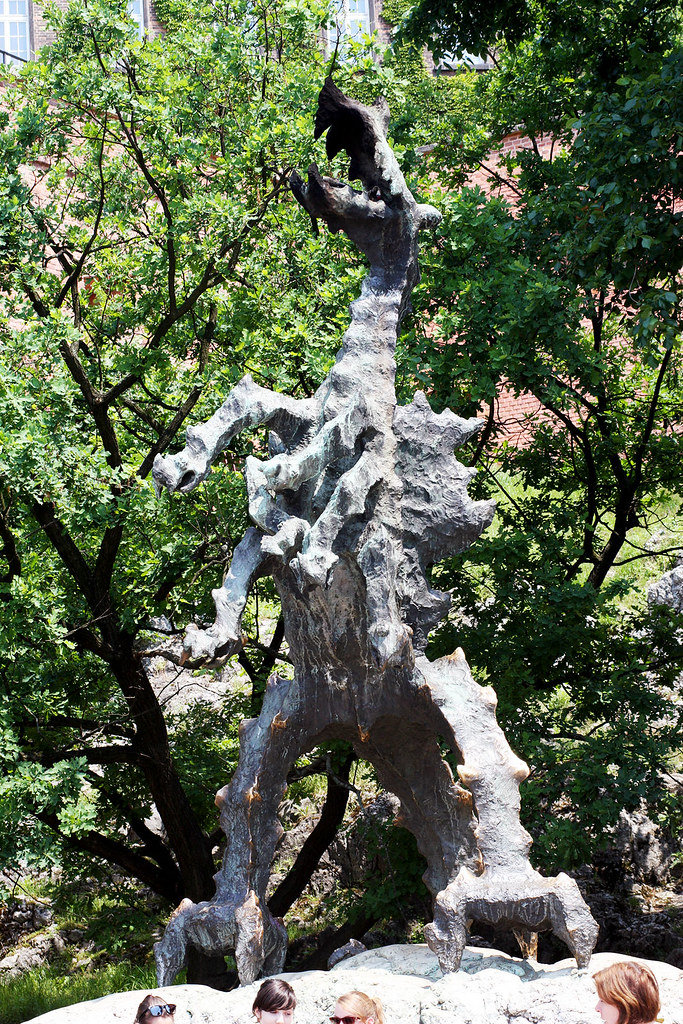 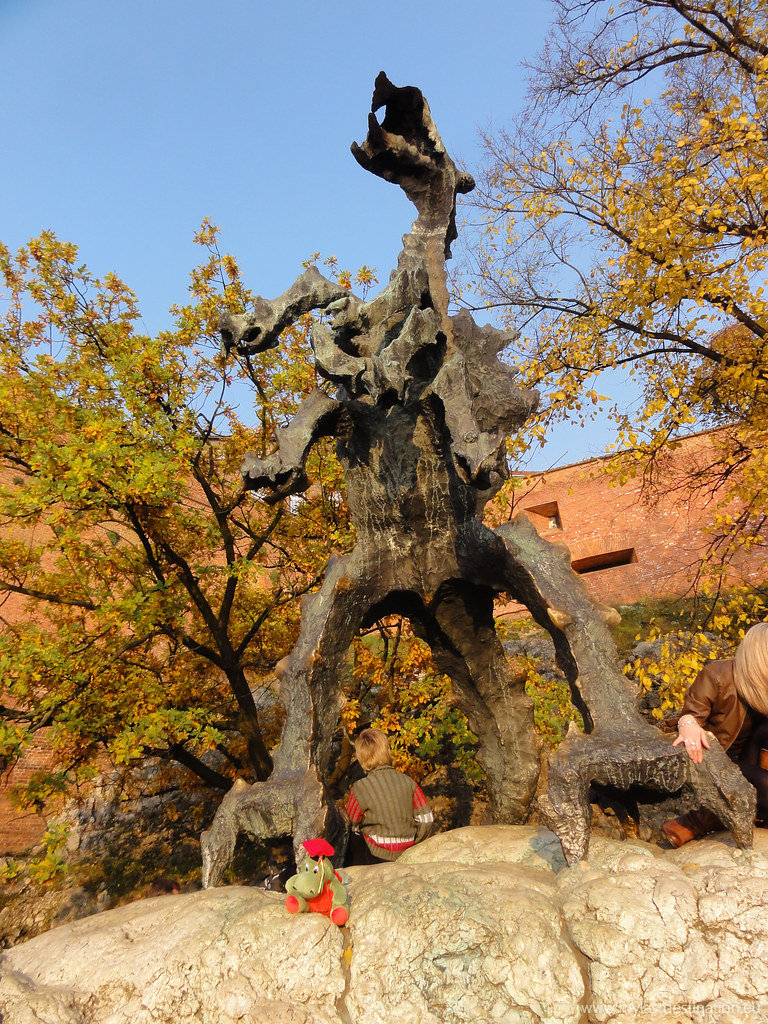 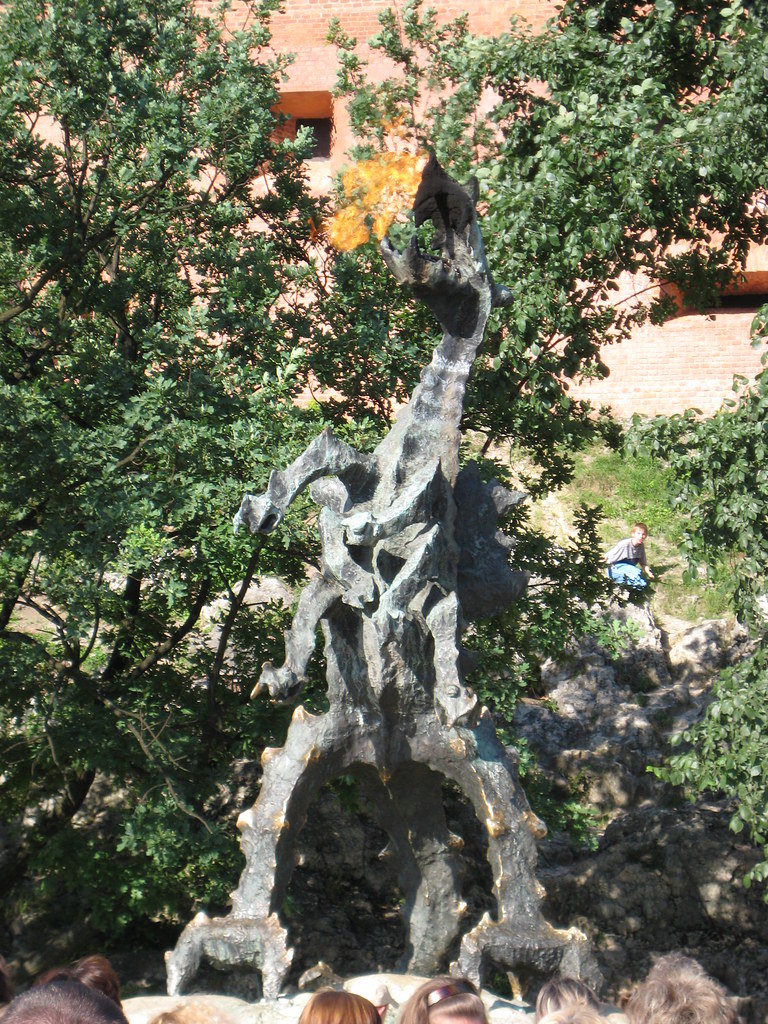 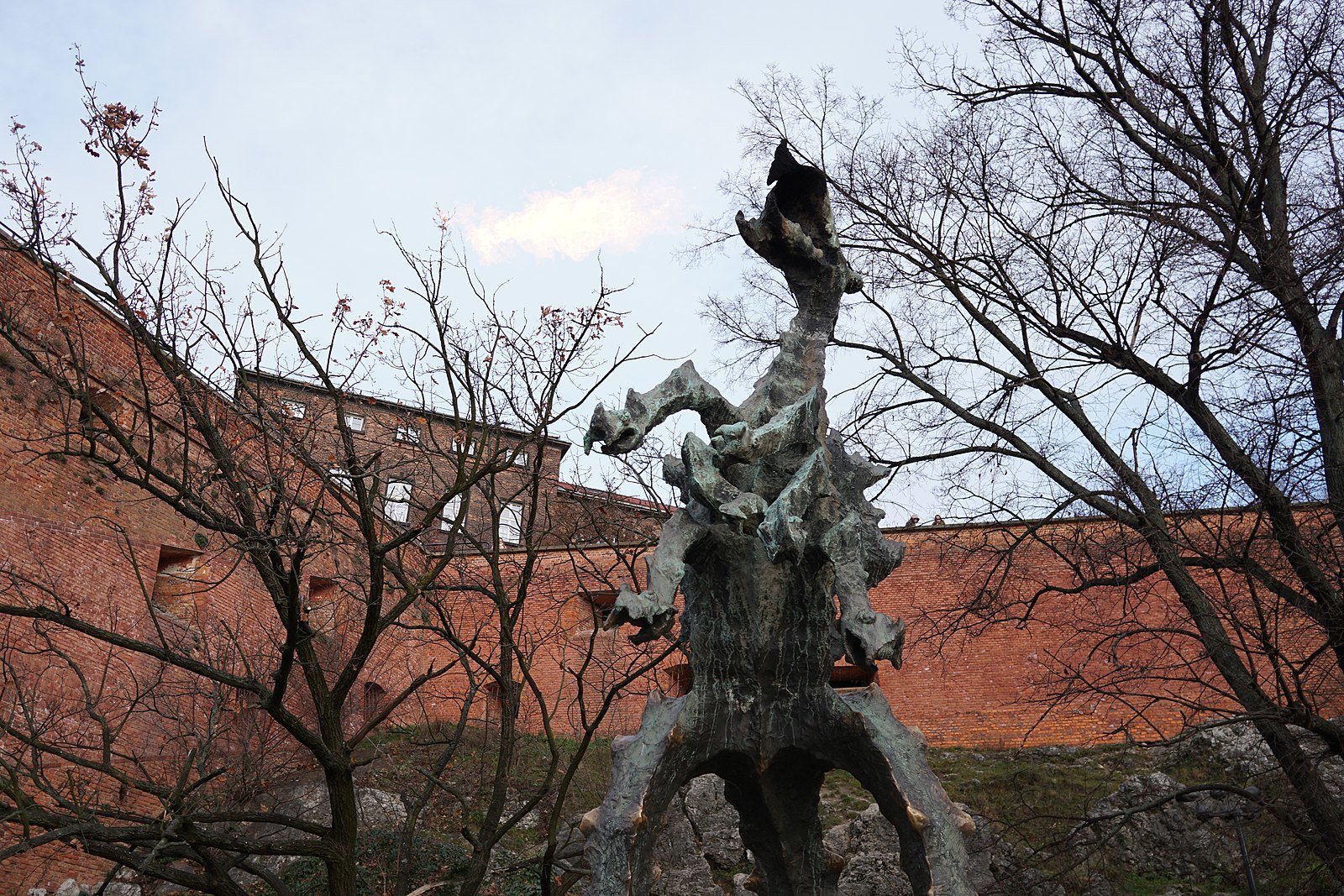 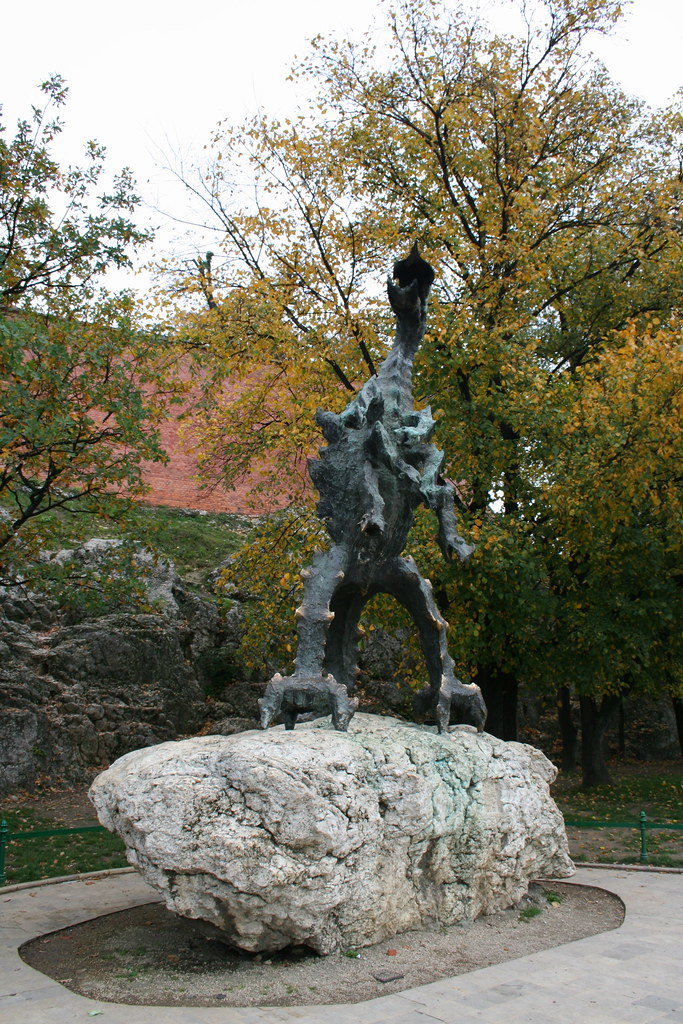 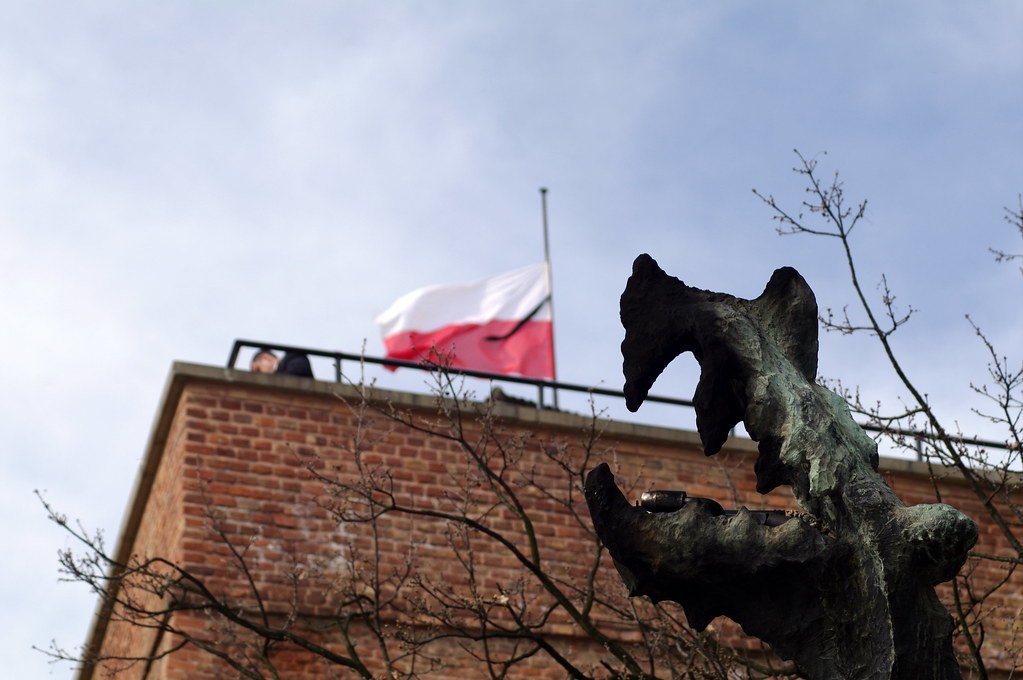 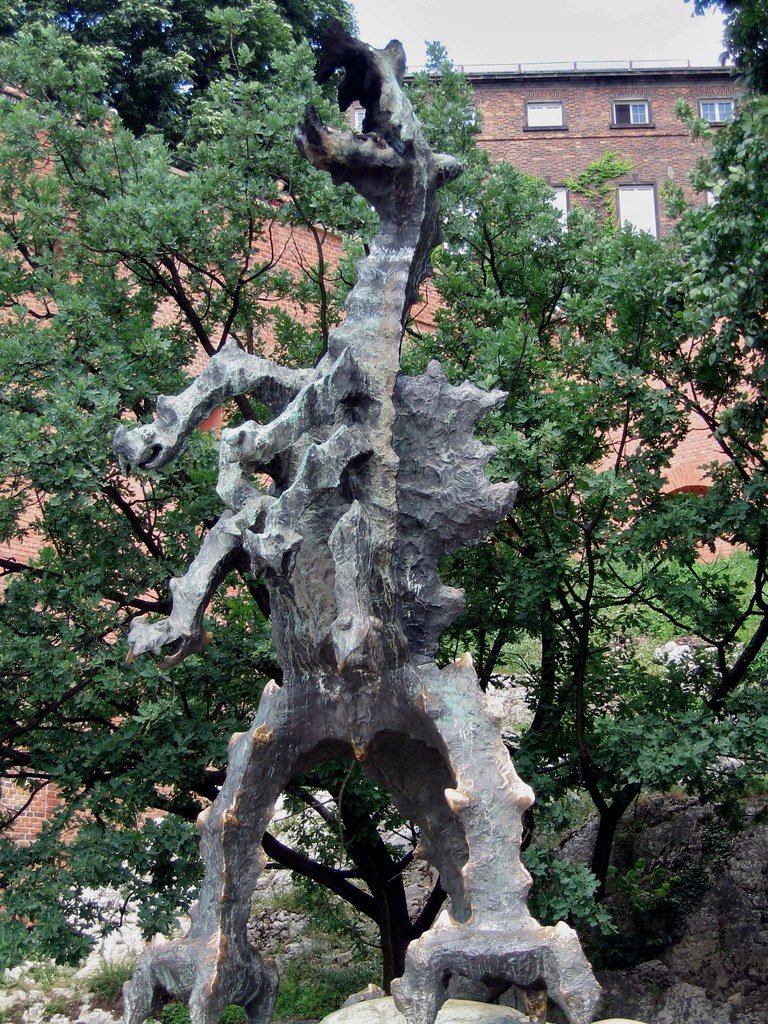