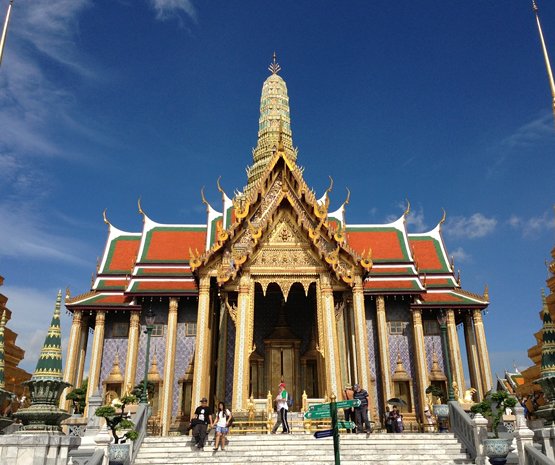 The Wat Phra Kaew (English Temple of the Emerald Buddha, Thai: วัดพระแก้ว (Pronunciation); full official name Wat Phra Sri Rattana Satsadaram, Thai: วัดพระศรีรัตนศาสดาราม) is regarded as the most sacred Buddhist temple (wat) in Thailand. It is located in the historic center of Bangkok (district Phra Nakhon), within the grounds of the Grand Palace.

The construction of the temple started when King Buddha Yodfa Chulaloke (Rama I) moved the capital from Thonburi to Bangkok in 1787. Unlike other temples it does not contain living quarters for monks; rather, it has only the highly decorated holy buildings, statues, and pagodas.

The main building is the central ubosoth, which houses the Emerald Buddha. There are three main doors used to enter the temple, however only the King and Queen are allowed to enter through the center door. Even though it is small in size it is the most important icon for Thai people. Legends hold that the statue originated in India, but it first surfaced in the vassal Kingdom of Cambodia and was given as a gift to the King of Ayuttaya in the 15th century 1434. The image disappeared when Burmese raiders sacked Ayuttaya and the image was feared lost. A century later, the 'Emerald' Buddha reappeared in Chiang Saen, after a rainstorm washed away some of its plaster covering. It was then moved to Chiang Rai, then Chiang Mai, where it was removed by the Laotian prince Setthathirath to Luang Prabang, when his father died and he ascended the throne of both Lanna and Lan Xang in 1547. In later years it was moved to the new capital of Lan Xang ,Vientiane.In the early 18th century the Kingdom of Lan Xang split into 3 different kingdoms;Vientiane,Luang Prabang,and Champassak.It remained in Vientiane for nearly 300 years until King Taksin of Thonburi(Siam) brought it back with him after invading the Lao lands to Thonburi when he expanded his kingdom into outer regions such as Lan Xang,Lanna,and Khmer lands in 1787.Which later became annexed into his kingdom.It was then taken to Bangkok where it is resides today.As the Buddha was brought back,Haw Phra Kaew where the Buddha was resided at in Vientiane which was built by King Setthathirath was destroyed by Siamese forces and the city of Vientiane ended it's 200 years of prosperity as it was burned to the ground.The temple was rebuilt again by King Anouvong of Vientiane who spent exile in Bangkok and returned to Vientiane to be ruled as King in the 1820's.He rebelled against the Siamese and Vientiane was destroyed for a second time in 1826.The three Laotian kingdoms were looted of all Laotian artifacts and Buddhas which most are found throughout Thailand such as Luangpho Phra Sai which is kept at Wat Pho Chai in Nong Khai province in Isan.The Siamese also took the Prabang in 1778 and returned it to the Laotian people.It was taken again in 1826,but returned back to Laos where it resides in Luang Prabang.Today many Laotian people still consider Vientiane the Emerald Buddha's rightful place.

The wall surrounding the temple area – from the outside only a plain white wall – is painted with scenes from the Thai version of the Ramayana mythology, the Ramakian. Several statues in the temple area resemble figures from this story, most notably the giants (yak), five-meter high statues. Also originating from the Ramayana are the monkey kings and giants which surround the golden chedis.

The Temple also contains a model of Angkor Wat, added by King Nangklao (Rama III), as the Khmer empire of Cambodia and the Thais share cultural and religious roots.

Despite the hot weather most of the year in Bangkok, long trousers are required to enter the wat. This rule is strictly enforced. The facility offers the rental of proper trousers for males, and long skirts for females. When one walks into the temple one should take off one's shoes as a sign of respect to the Buddha, as is done in other temples in Thailand.

Chida.Chinida
Beside the Emerald Buddha in the temple, You will see the Green Giant statue and others.The characters of Ramayana Epic!! Also other gorgeous architectures. Don't miss if you have a chance to visit!!

Simple Discoveries
Stunning. Get here right at opening to minimize the crowds. There are free English tours available inside but amount to little more than discussing key sites off a free map. Spend time & soak it in.

Briszeida Bullock
Beautiful temples. Make sure to wear comfortable walking shoes and sun protective gear. Also everyone must be covered from elbows and knees up. They are not to be exposed.

Jesse Johnston
Although extremely touristy and oftentimes overrun with crowds, visit when the doors open around 8am, come dressed appropriately (no exposed knees or shoulders) and enjoy a walk around.

J-OSL
The royal temple for the royal ceremony, very elegant architecture with the emerald Buddha. Not only Thai people would like to visit this temple, but also lots of foreign tourists.

Sopida A.
Gorgeous temple but we made a mistake of visiting here on New Year's Day it was way too overcrowded! We were standin outside for more than 1/2hour tryin to get a cab. But it was still very beautiful.
Load more comments
foursquare.com
9.1/10
Kp Palm, irishmet and 134,774 more people have been here
I've been here
Add to wishlist

Temple of the Emerald Buddha on Foursquare

The National Gallery of Thailand is an art gallery located in Bangkok, 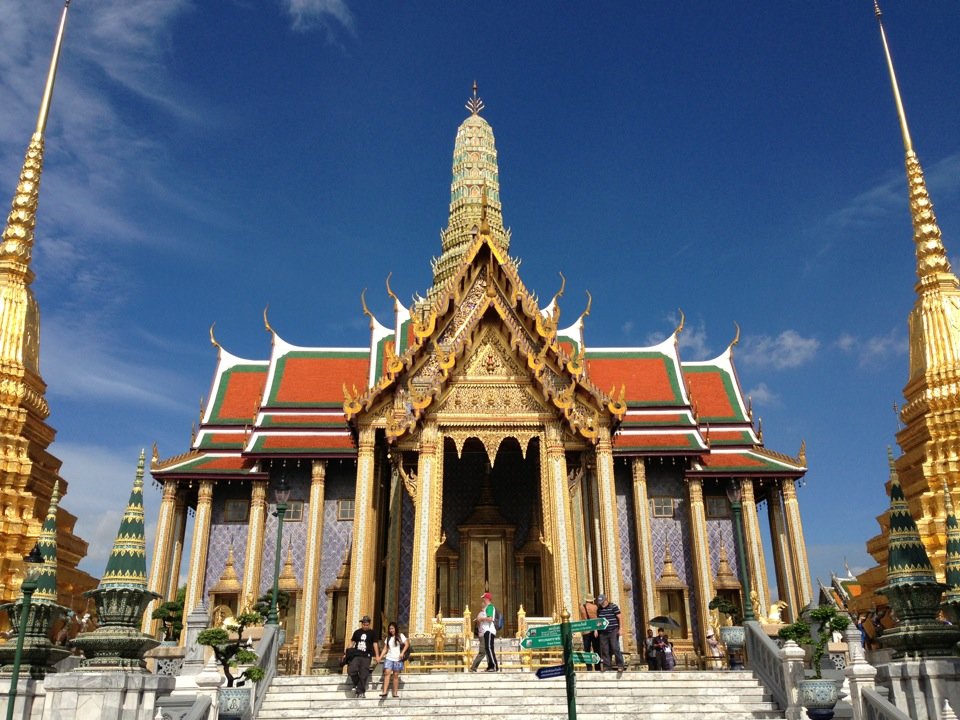 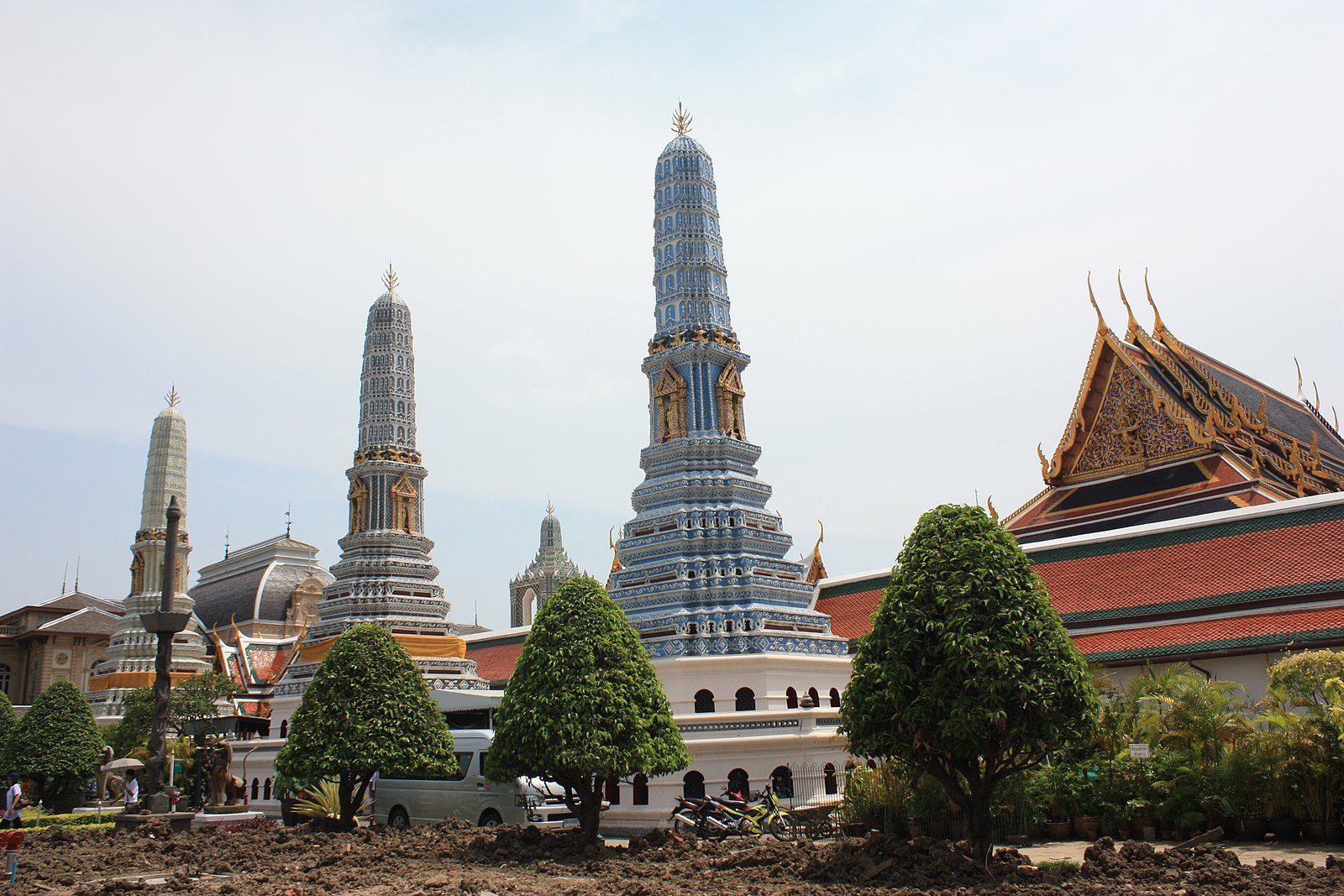