×
What are you looking for?
See all results
Palaces in Alupka 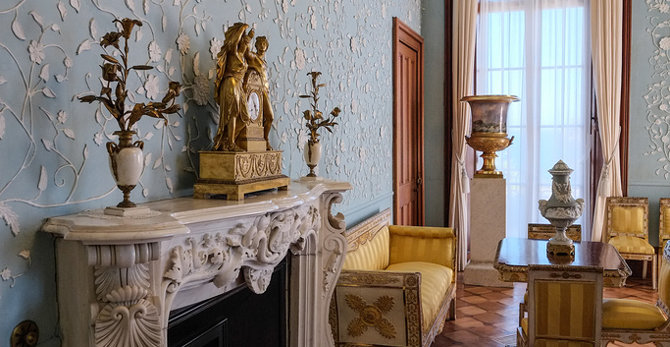 The Vorontsovsky Palace (Ukrainian: Воронцовський палац; Russian: Воронцовский дворец) is an historic palace located in the town of Alupka, Ukraine. It is situated at the foot of the Crimean Mountains.

of the Vorontsovsky Palace, in the town of Alupka in Crimea, Ukraine.]]

The Vorontsovsky Palace (Ukrainian: Воронцовський палац; Russian: Воронцовский дворец) is an historic palace located in the town of Alupka, Ukraine. It is situated at the foot of the Crimean Mountains.

The Vorontsovsky Palace was constructed from 1830-1848, to be used as a summer residence of the governor-general of the Novorossiysky Krai, Prince Mikhail Semyonovich Vorontsov.

The palace was built according to a project by English architect Edward Blore (1789-1879). The architect did not visit Alupka, but was well informed about the area's mountainous landscape. When construction began, it was discovered that a foundation and the basement of the first portion of the building was already in position, as the palace was first supposed to be constructed on different plans, by architects Francesco Boffo and Thomas Harrison.

The first room to be constructed of the Vorontsovsky Palace was the dining room, built from 1830-1834. The main and central wing of the building was constructed from 1831-1837. During 1841-1842, a billiard room was added to the dining room. During 1838-1844, the guest wing, the east wing, towers, the maintenance wing, and the front entrance were added on to the building. The last wing built of the castle was the library wing, constructed from 1842-1846. The remaining years on the construction of the palace were spent on the interior decor.

The largest of the landscaping jobs carried out on the palace's grounds were done from 1840 to 1848 with the help of soldiers helping to construct the park's terraces located in front of the building's southern entrance. The parks plantlife was brought in from the shores of the Mediterranean Sea, from North and South America, and eastern Asia. Currently over 200 species of plantlife exist within the palace's grounds.

In the summer of 1848, white marble sculptures of lions were installed on the central staircase leading up to the castle. The sculptures were carried out by the Italian sculptor Giovanni Bonnani. The construction of the palace ensemble was finished with the addition of the lion sculptures.

. The distant Ai-Petri Mountain is seen in the background.]]

For three generations, the Vorontsovsky Palace belonged to the Vorontsov family. After the Soviets came to power after the October Revolution, the palace was transformed into a museum, which took up the main, dining, and library wings. In 1927, a resort was opened in a wing of the palace, and a polyclinic and rest facility was opened within the palace's technical wing.

When World War II began in 1941, the museum expositions were evacuated from Alupka in fear of damage from attacking armies. However, other museums in Crimea were not evacuated due to a lack of time. Occupants of the museum had also evacuated many architectural pieces, including some 537 items of art and graphics, 360 pieces of the building's decor, sets of unique furniture, and a series of historic books. After the war, a small collection was recovered and was placed back in the palace.

From February 11-14, 1945, the Yalta Conference took place in the neighbouring Livadia Palace between the United States, the United Kingdom, and the Soviet Union. During the time, the Vorontsovsky Palace served as the residence of Winston Churchill and the British delegation to the conference.

In 1956, the Vorontsovsky Palace was once again reinstated as a museum, on the order of the Soviet government. Two years later, the museum was changed to incorporate architectural and art exhibits, and in 1965, was named the Alupka palace-museum complex.

The territory of the palace and neighbouring park were commonly used as sets for movies, like "Nebesnye lastochki", and "Zhenitba figaro."

The Vorontsovsky Palace was built according to new architectural-construction principles, however still managing to incorporate Classical style architectural elements. An important architectural characteristic of the palace was its relation to the nearby Crimean Mountains, with which it harmonized perfectly.

However being mainly in the English style, some eastern elements can be seen in the palace. For instance, the Gothic style chimney stacks are reminiscent of Islamic minarets. The southern façade is also designed in an eastern architecture style. The southern entrance to the palace is characterized with a flat roof topped off with two minaret-style towers, below which rests an entrance hall leading out towards the exit through a horse-shoe arch. On the interior walls of the entrance hall is an inscription written in Arabic: "There is no Conqueror, except Allah." Side balconies adjoin the entrance hall looking over the so-called "lion terrace."

The Yusupov Palace (українська. Юсуповський палац) is a palace l

Dulber is a palace in Koreiz, near Yalta in Crimea. The palace of

Harewood House (pronounced , as if written Harwood) is a country house 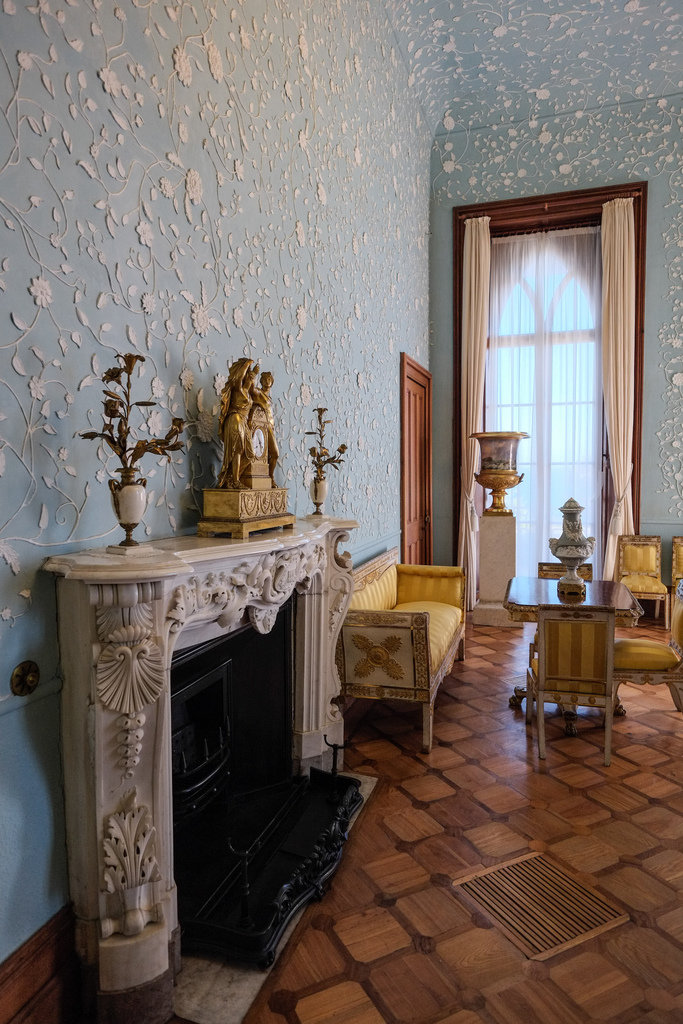 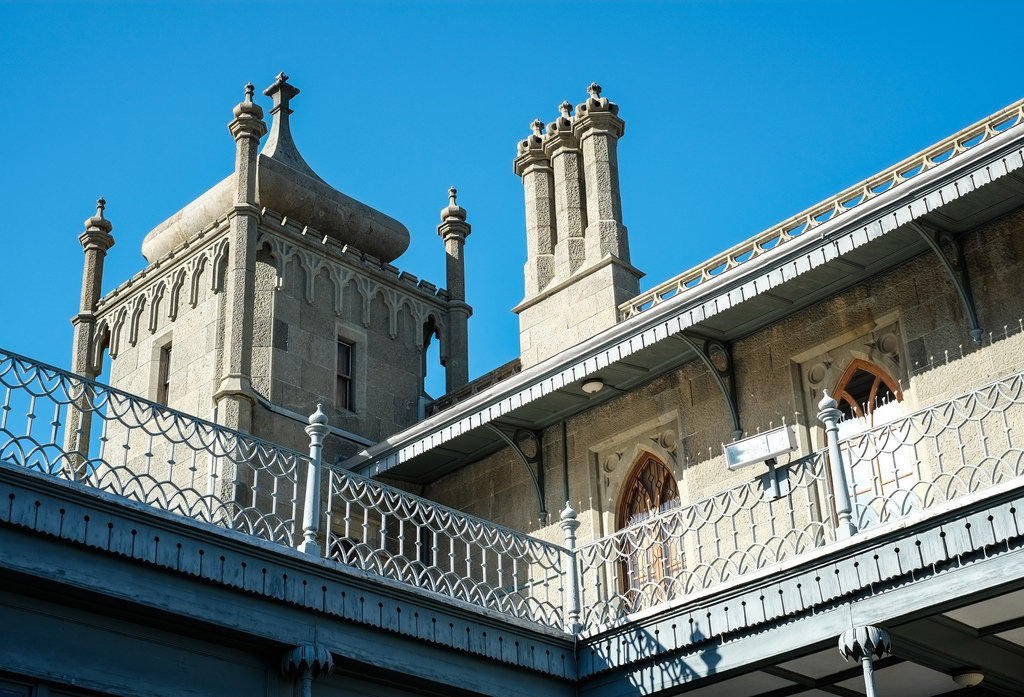 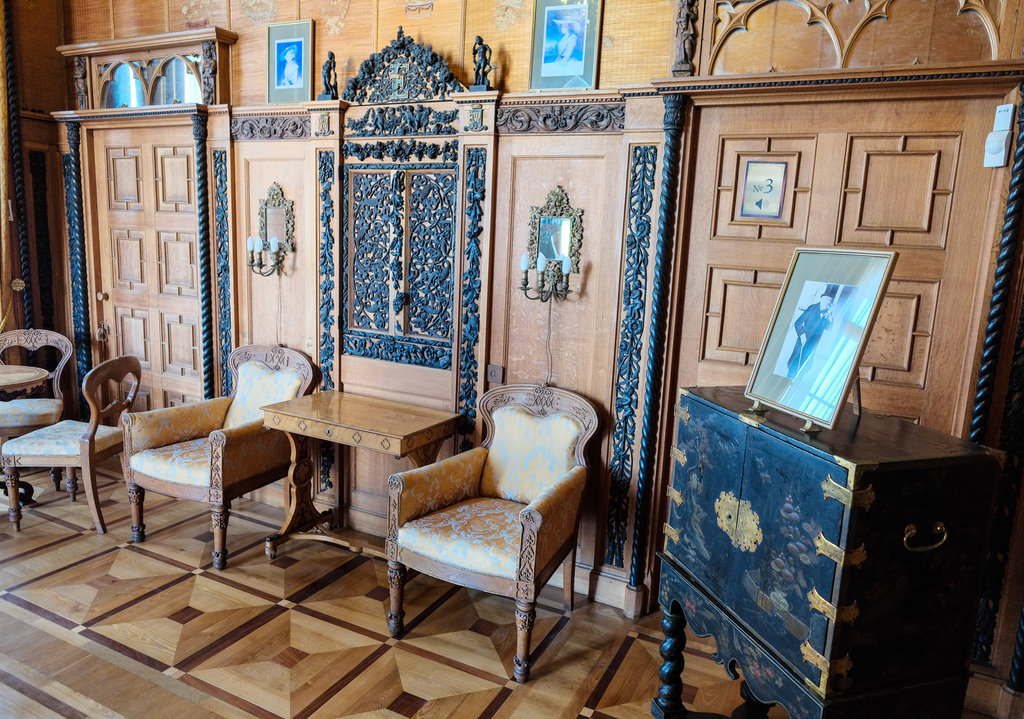