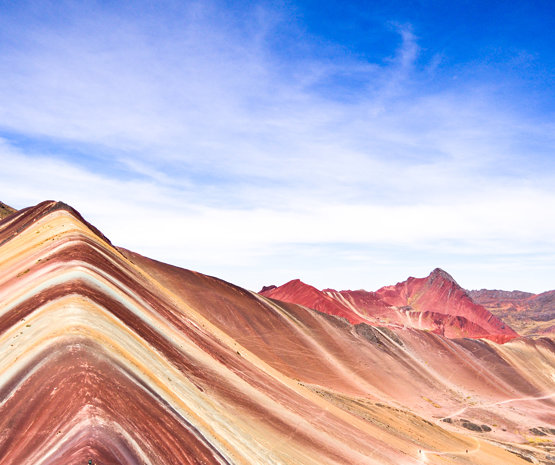 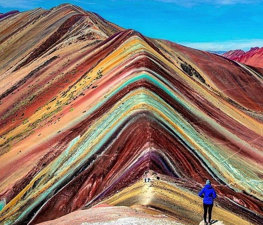 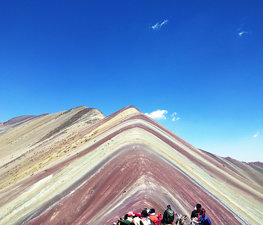 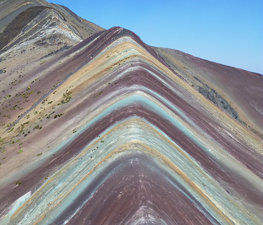 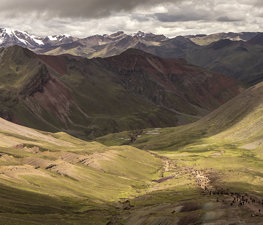 Vinicunca, or Winikunka, also called Montaña de Siete Colores, Montaña de Colores or Rainbow Mountain, is a mountain in Peru with an altitude of 5,200 meters above sea level.

Tourist access requires a two-hour drive from Cusco, and a walk of about 5-kilometer (3.1 mi) or three-and-a-half-hour drive through Pitumarca and one-half-kilometre (0.31 mi) a steep walk (1-1.5 hours) to the hill. As of 2019, no robust methods of transportation to Vinicunca have been developed to accommodate travelers, as it requires passage through a valley.

It is located on the road to the Ausangate mountain, in the Andes of Peru, in the Cusco Region, between the districts of Cusipata, province of Quispicanchi, Pitumarca, and the province of Canchis.

In the middle of the 2010s, mass tourism became attracted by the mountains' series of stripes of various colors. This due to its mineralogical composition present on the slopes and summits.

Leaving the city of Cusco, one can arrive to Vinicunca through the Longitudinal Race of the Peruvian Sierra del Sur (PE-3s) in the direction of the town of Checacupe where we take the fork to the town of Pitumarca, and from this town along a tricky trail passing through several rural communities such as Ocefina, Japura, Hanchipacha, until arriving at the community of Pampa Chiri. The road ends, requiring one to start a 5-kilometer walk to the Vinincunca pass, where you can see the natural formation in the shape of a rainbow, considered the Mountain of Colors.

The entrance to the Rainbow Mountain is made by a village of Pitumarca, two hours from the city of Cusco, then a walk on foot, by car or motorcycle on the slopes of the mountain and then you can go up on horseback or on foot the rest of the way until you reach the Montaña de Colores. If you decide for a 45-minute hike instead of a 2-hour hike from Pitumarca, then you have to travel by car for an additional one-and-a-half-hour drive on a non-paved road through the mountains. The drive features view points where the valley can be seen, as well as llamas and alpacas being herded by the shepherds on the mountains.

Travelers to Peru and locals generally agree that the best time of the year to visit the colorful site is in the month of August, since it is dry season and provides a beautiful view, maximizing the vivid colors of the mountains. Nevertheless, the famous colors always look aesthetically beautiful.

Travelers are advised to try to avoid days following significant rainfall (namely in the months of December, January and February) and much more in times when snow has fallen. In terms of fauna, travelers are able to view a wide variety of alpacas and other camelids in certain short-term seasons.

According to the investigation of the Cultural Landscape Office of the Decentralization of the City of Cusco, the colorations of the mountain of the 7 colors are due to the mineralogical composition that it has: the pink color is for the red clay, fangolitas (mud) and arilitas (sand). The whitish colouring is because of the quartzose, sandstone and marls, rich in calcium carbonate. The red one made up of the claystones (iron) and clays belonging to the upper tertiary. The green is due to the compound of phyllites and clays rich in ferro magnesian. The earthy brown is a product of fanglomerate composed of rock with magnesium belonging to the Quaternary era. And the mustard yellow color for the calcareous sandstones rich in sulphurous minerals.

The mining approval process began on March 30, 2015 in Lima, when the mining exploration company Minquest Perú SAC, owned by the Canadian Camino Minerals Corporation, submitted a red beds mining petition to the Geological, Mining and Metallurgical Institute (Instituto Geológico Minero y Metalúrgico, INGEMMET). The petition included the territory of the districts of Cusipata and Pitumarca with an area of 400 hectares, covering the whole of the mountain, and also overlapping with the peasant communities of Chillihuani and Pampachiri. INGEMMET issued a warning that parts of this territory, including Vinicunca, should have been protected within the "Ausangate Regional Conservation Area." In 2009, the Regional Government of Cusco had proposed the creation of this protected area to Peru's National Service of Protected Natural Areas (Servicio Nacional de Áreas Naturales Protegidas, SERNANP). However, SERNANP responded that the Ausangate Regional Conservation Area had never been officially created, since the proposal had not met the necessary requirements. Therefore, on March 16, 2018 with Presidential Resolution No. 042-2018-INGEMMET / PCD / PM INGEMMET, the title of metallic mining concession was granted.

On May 21, 2018, following public protests, the company informed the Regional Government of Cusco of its renunciation of the concession; however, the Regional Government indicated that it was the Ministry of Energy and Mines that must assume the administrative actions to recover possession of these lands. The National Chamber of Tourism (CANATUR) expressed its deep concern over the management of Vinicunca, one of the most important components of Peru's new appeal to tourism.

In November 2018, Peru's President Martín Vizcarra issued a decree enforcing a 12-month ban on all mining activity in the area. The Regional Government stated its expectation that within that time frame, the Ministry of Energy and Mines would permanently register the region as a protected conservation area.

Ola Jarosz
Be WELL acclimatized to the altitude-otherwise this one will give you quite a headache.Its a gorgeous site but remember you ll be over 5000m above sea level and that requires more than muscle stamina.

Iwan Westdijk
Take it easy. The high altitude makes this a very challenging trail. The view is magnificent!

Majed Alashari
Beautiful colorful mountain. Be prepared for hour & half of hiking in both ways. But it worth every single step.

Cumbre del Cerro San Cristóbal is a tourist attraction, one of the 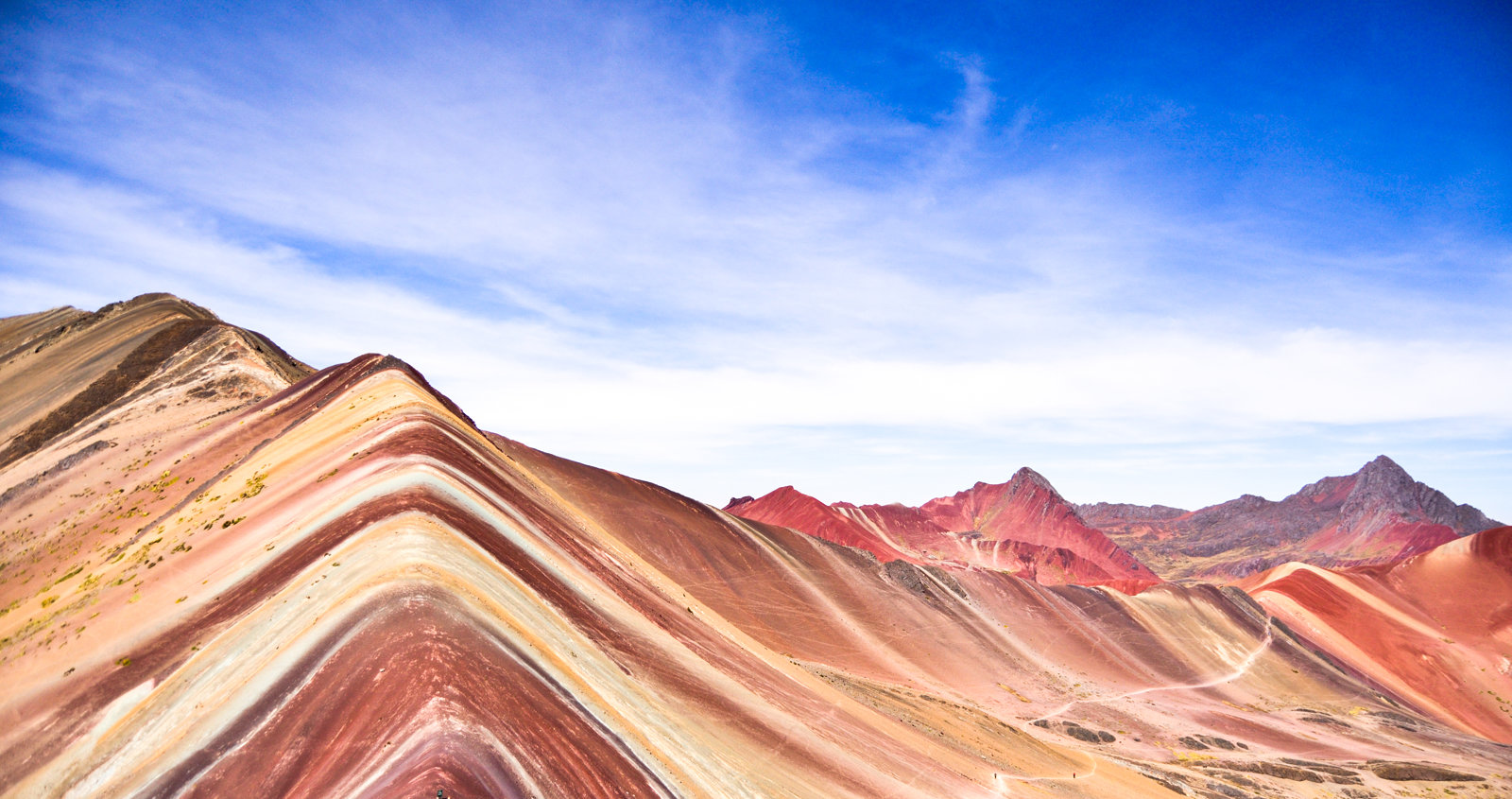 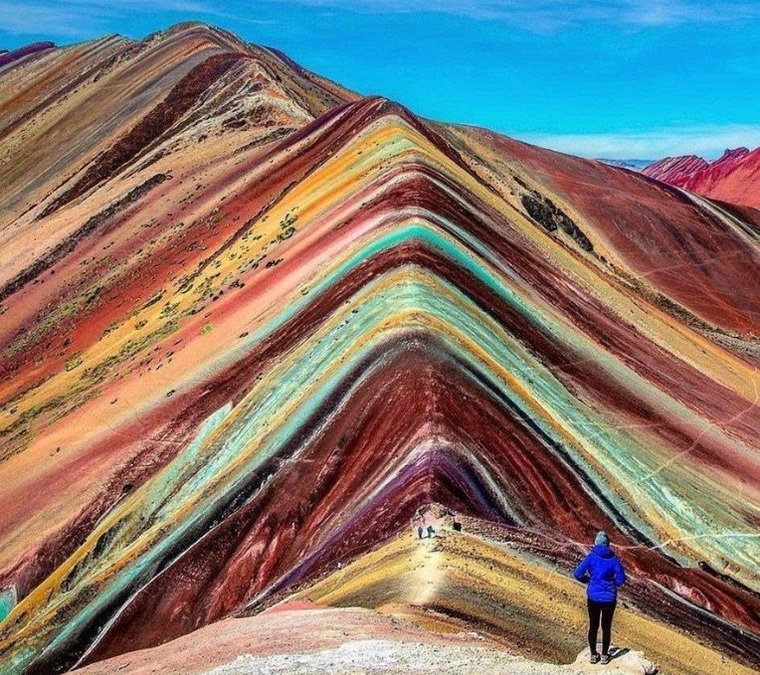 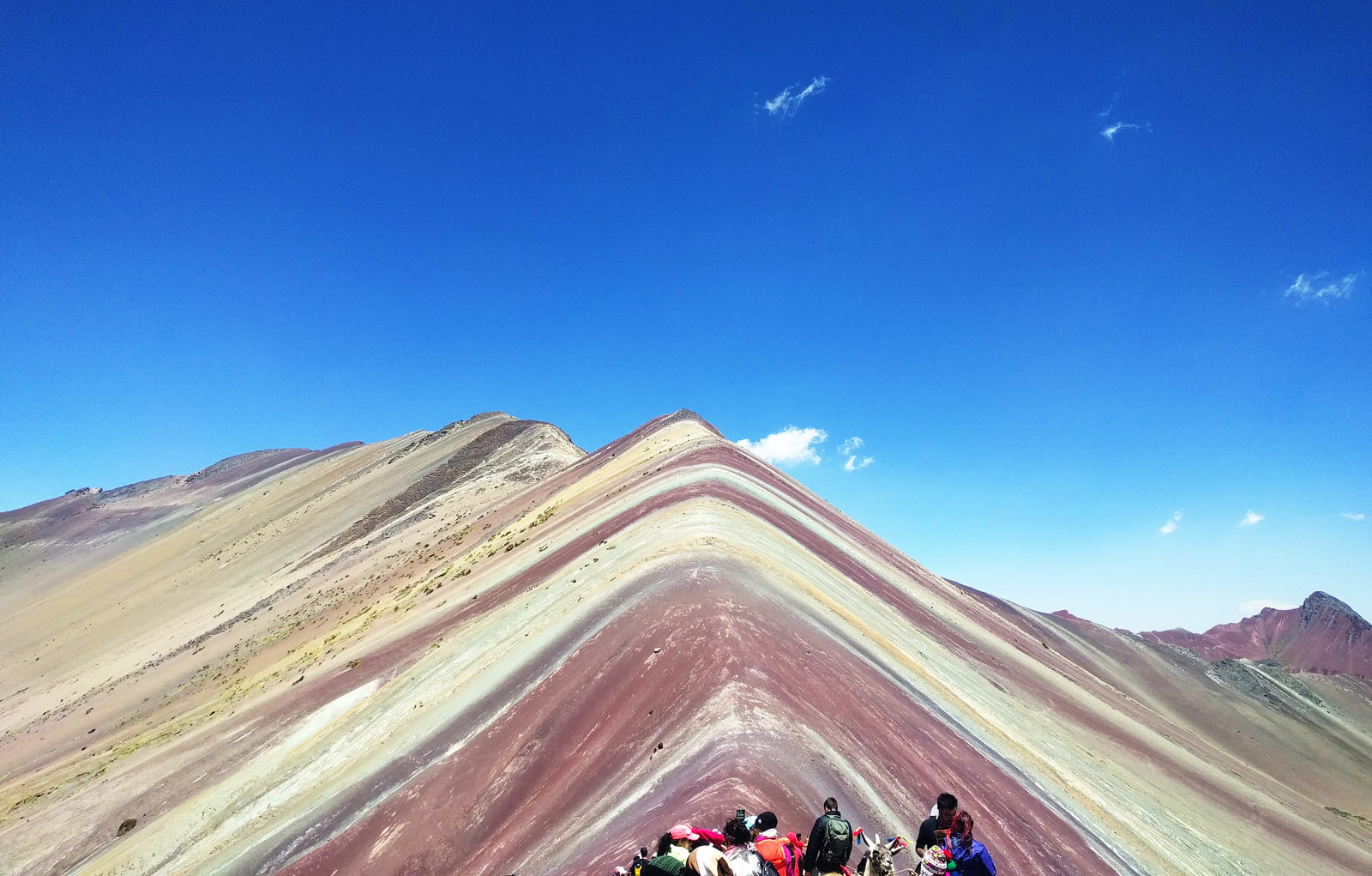 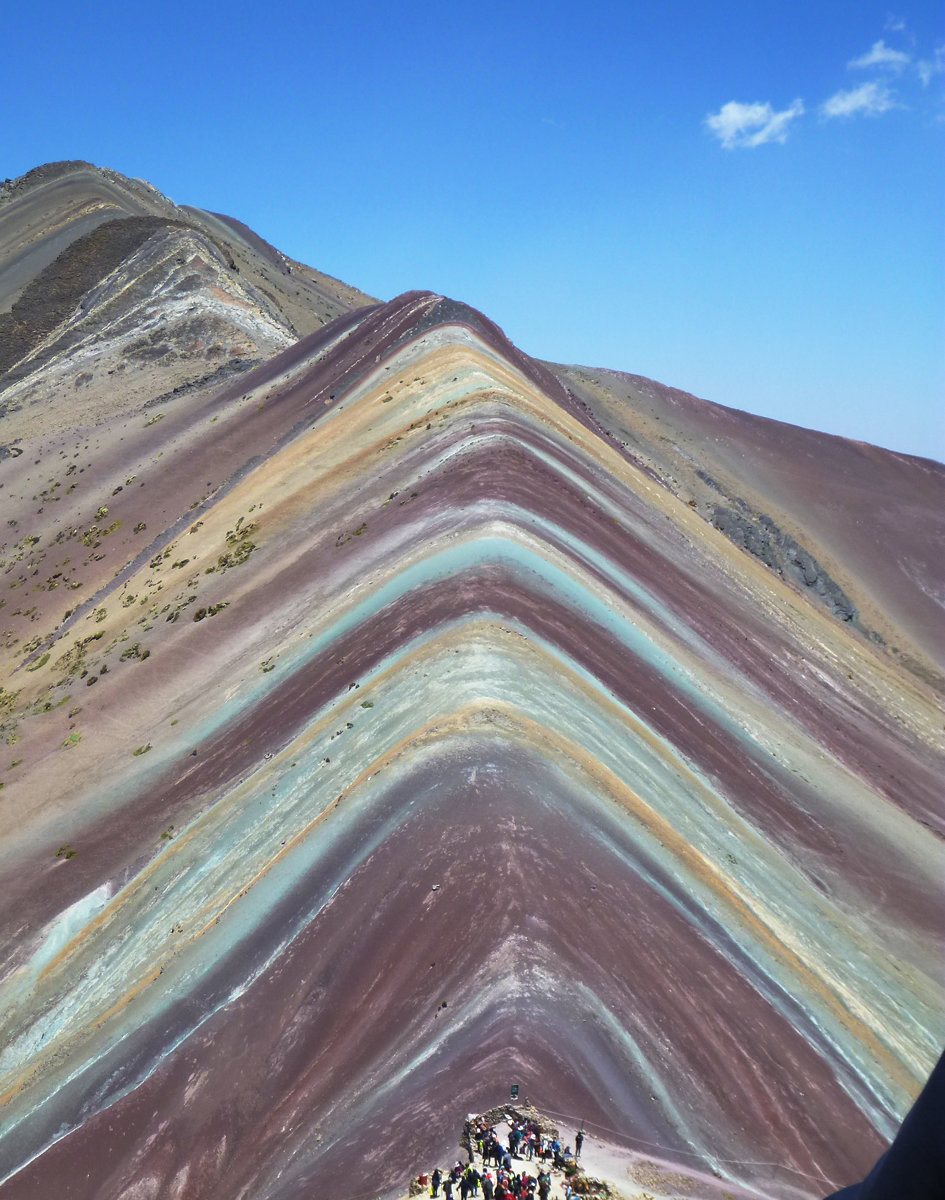 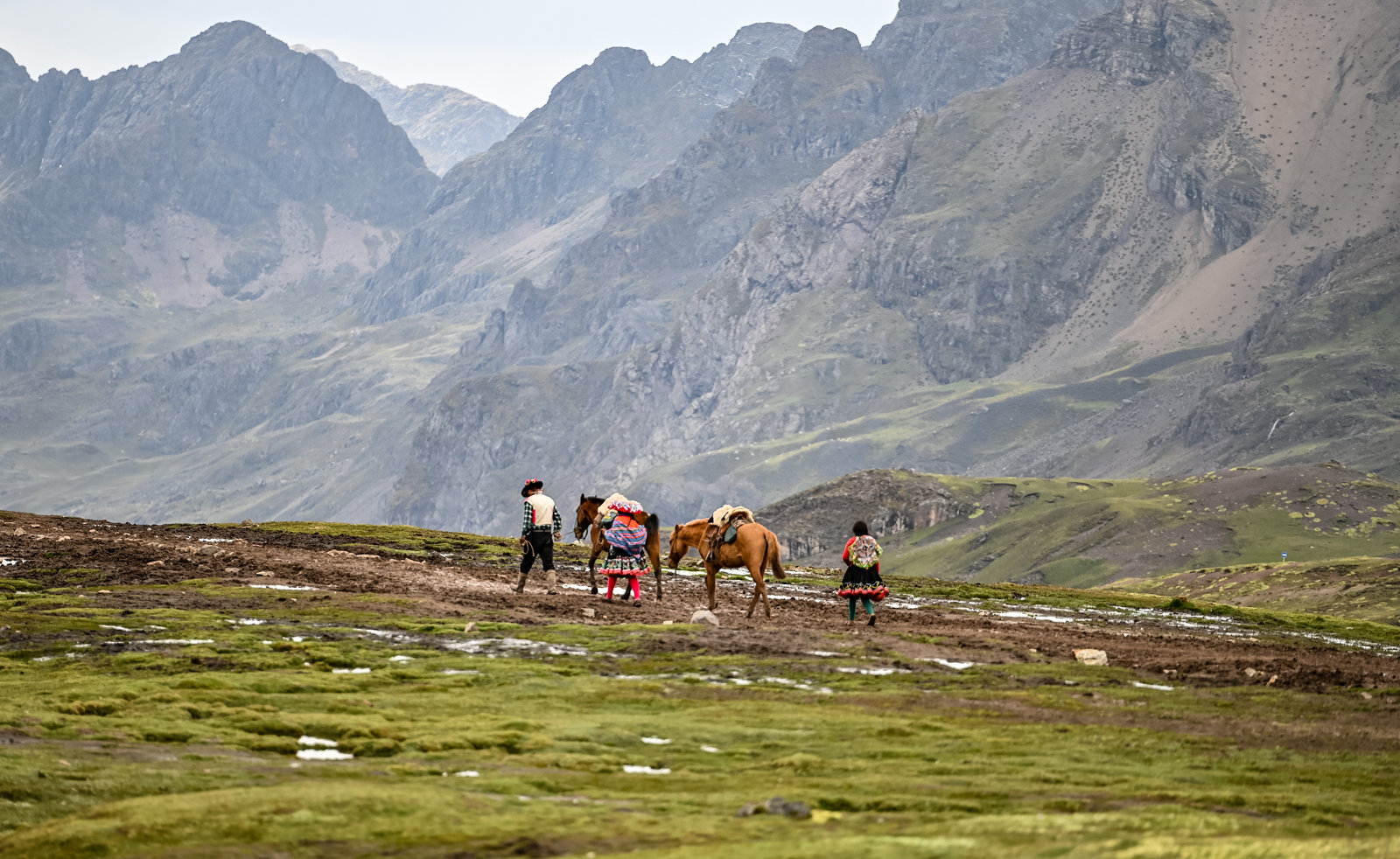 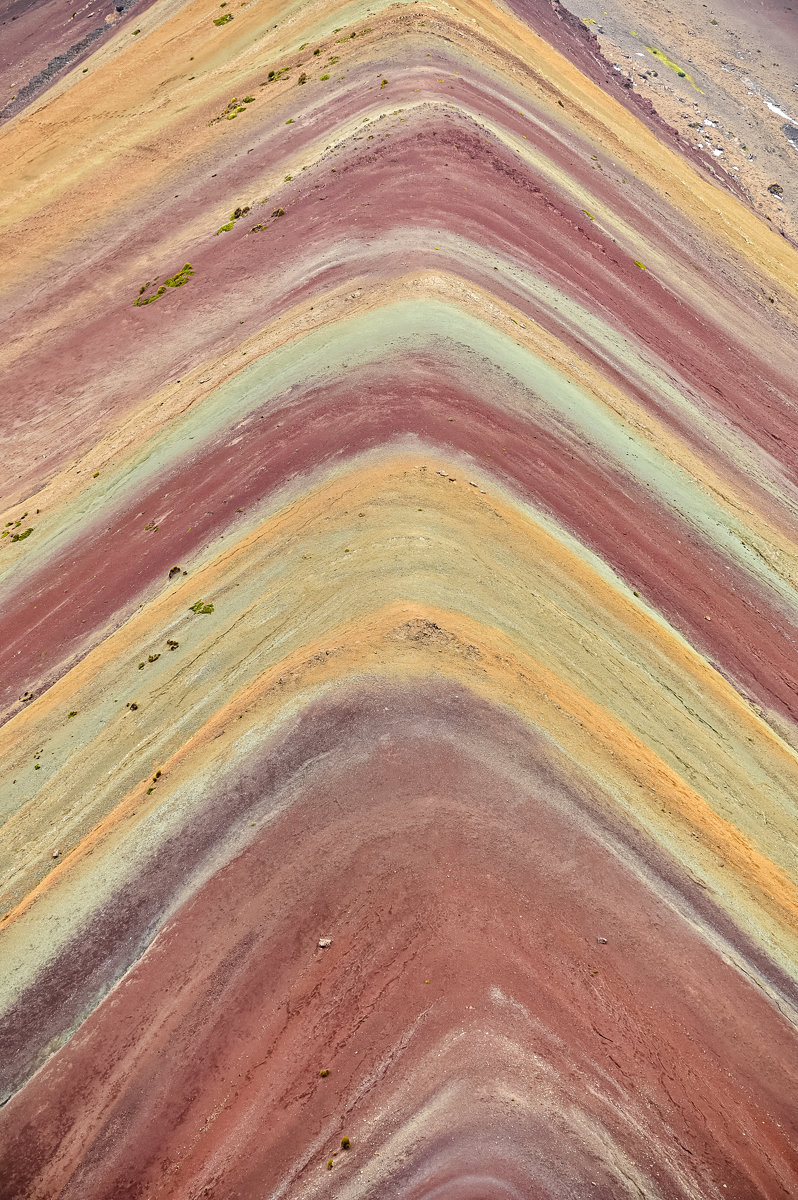 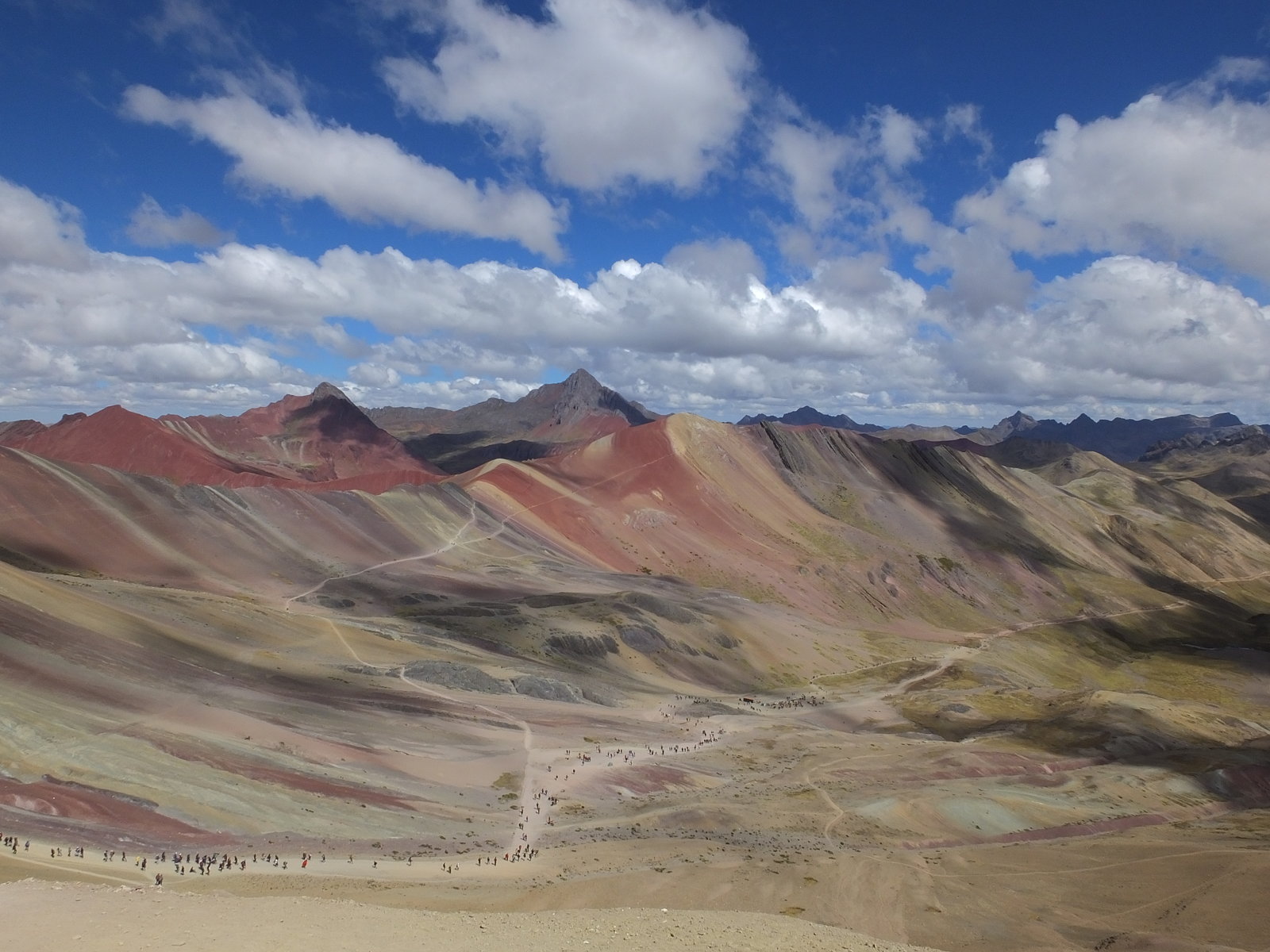 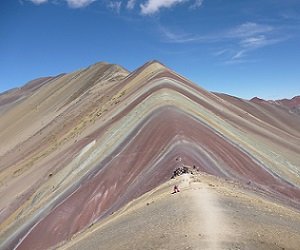 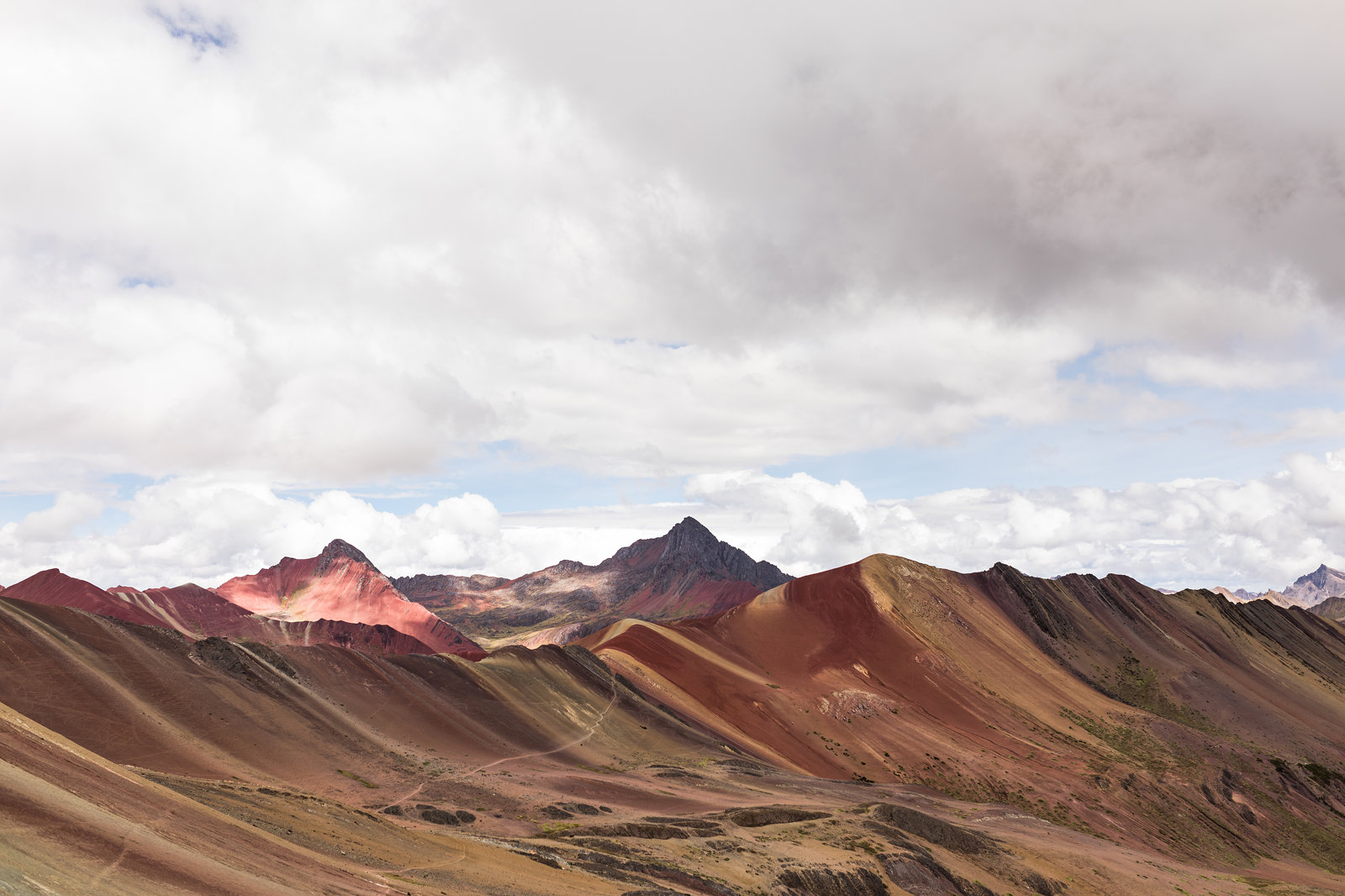 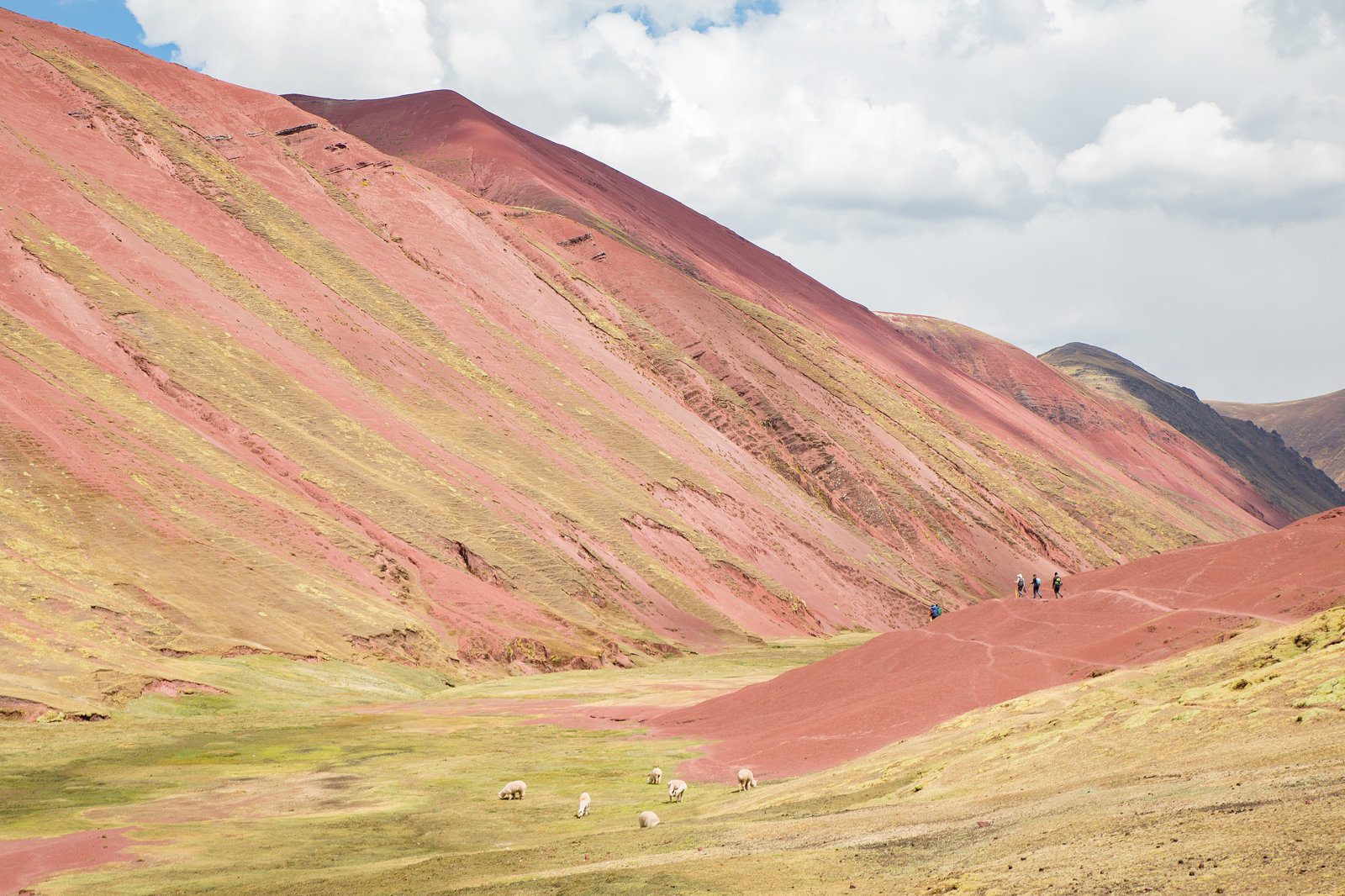 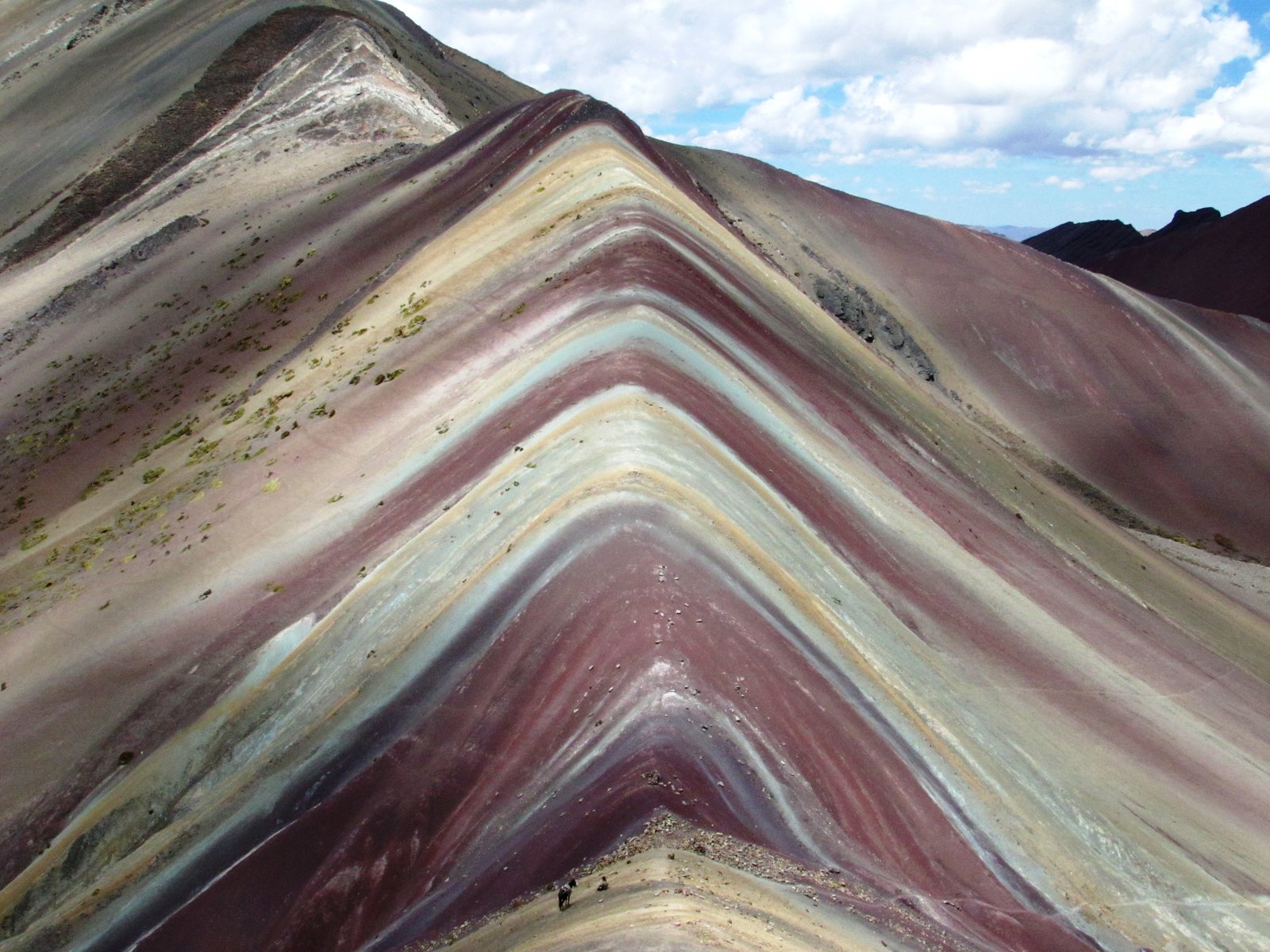 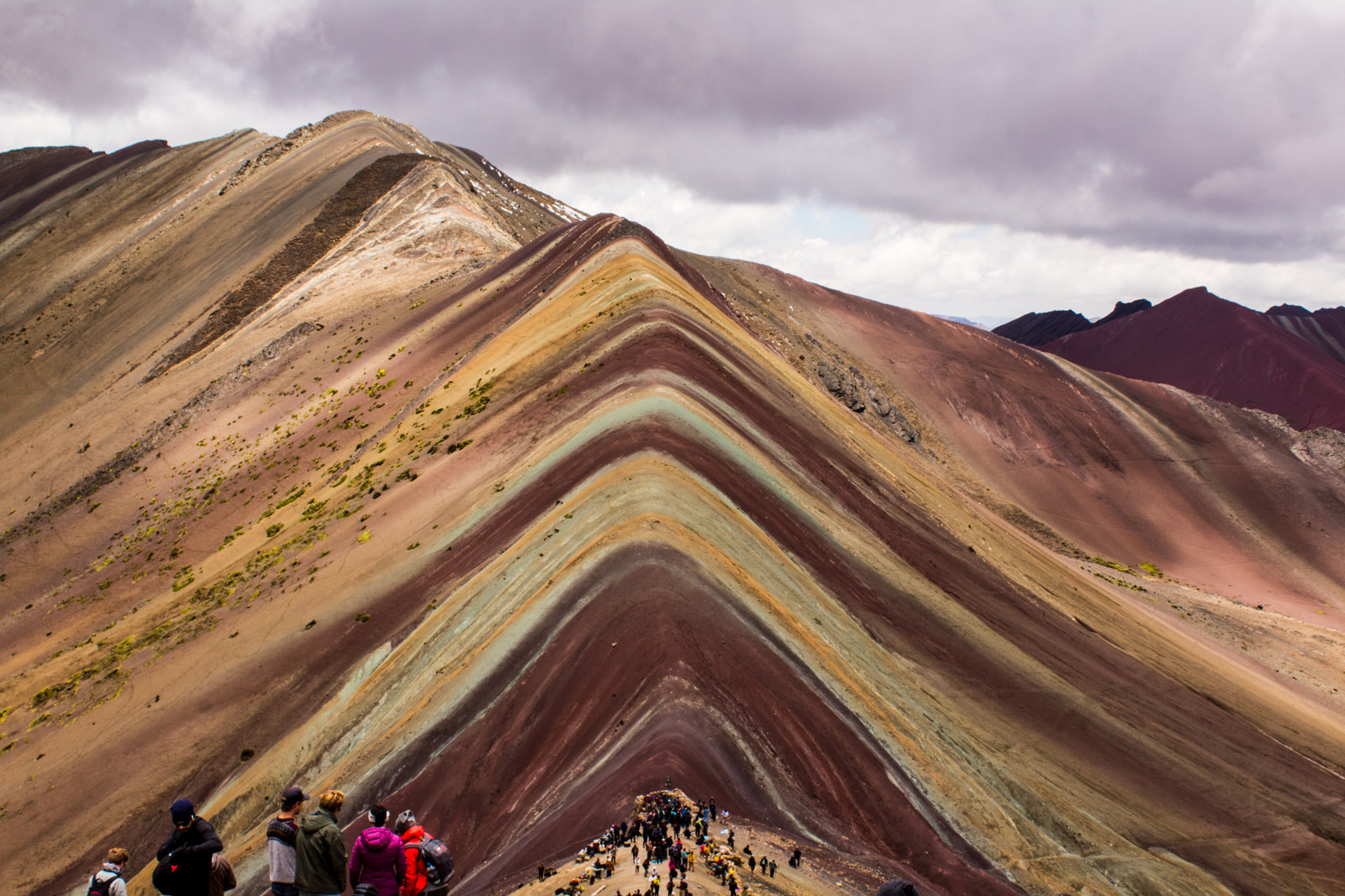 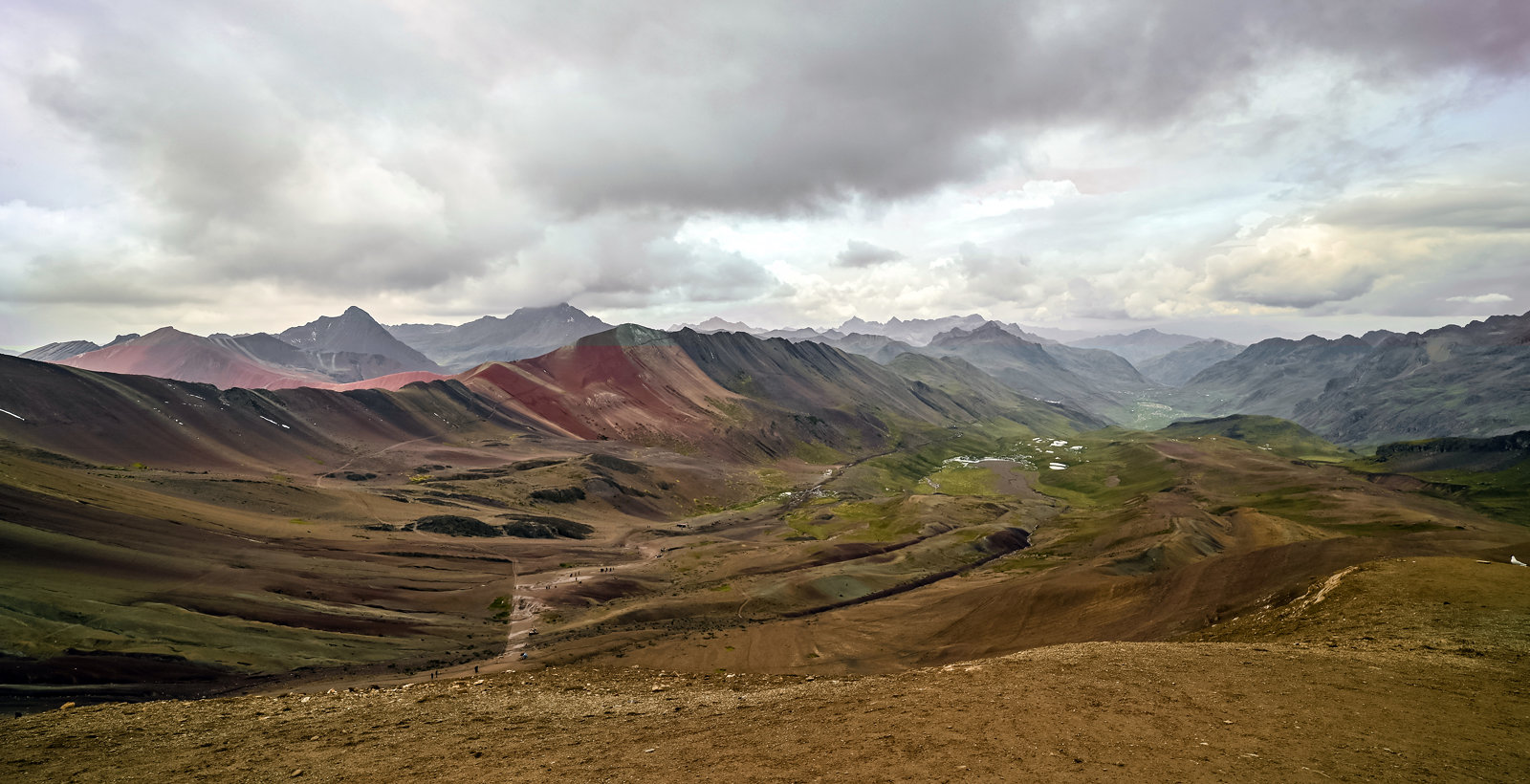 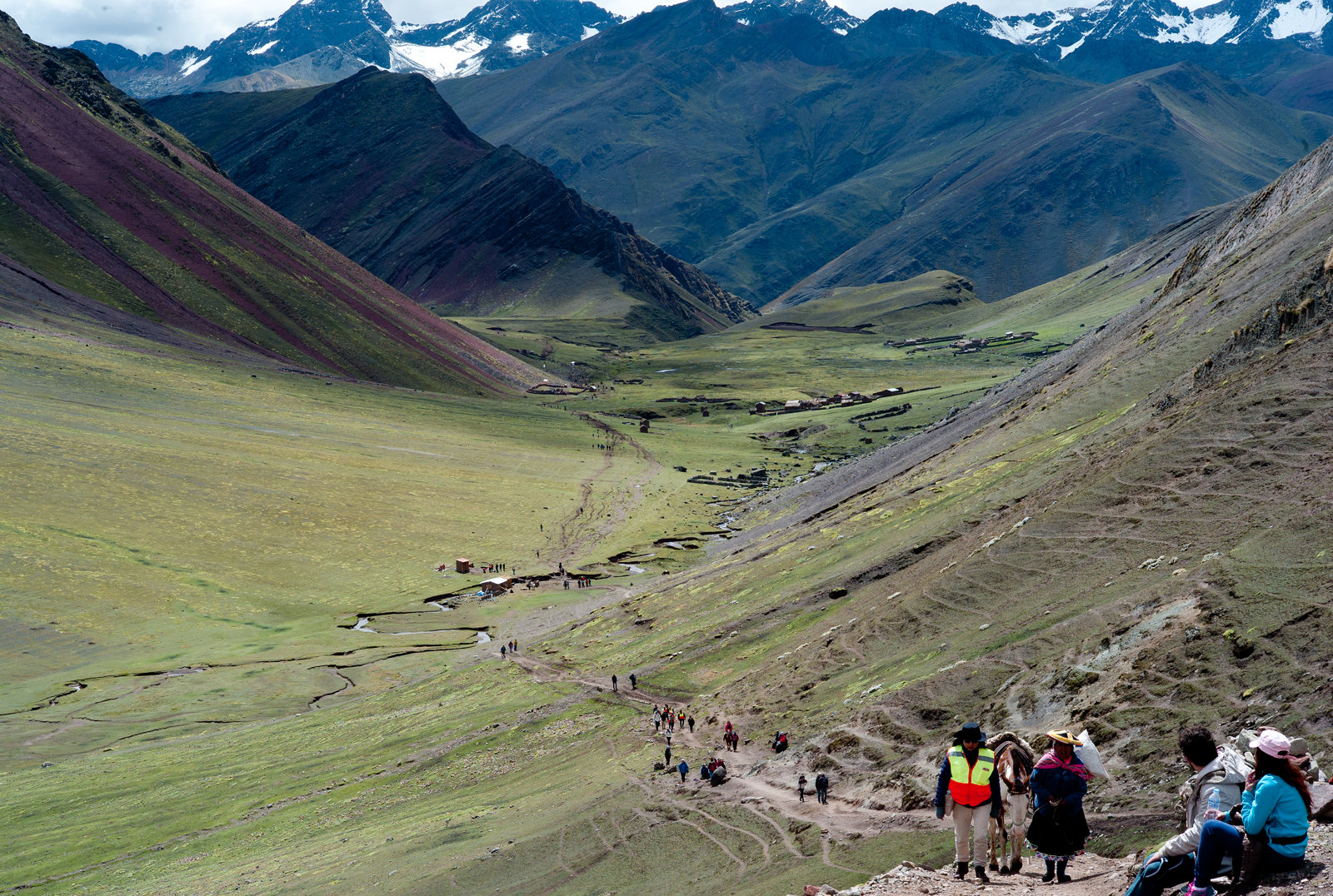 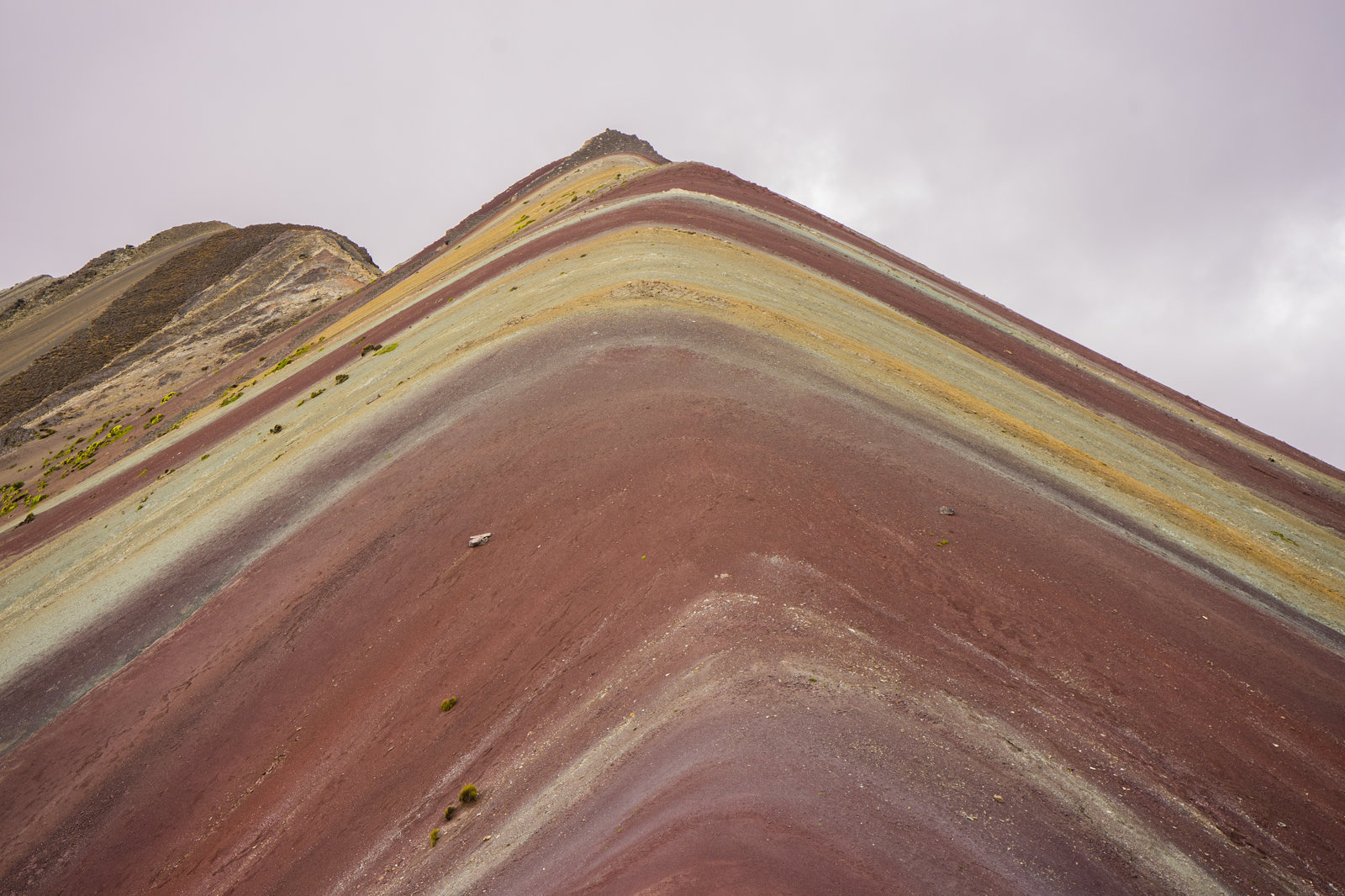 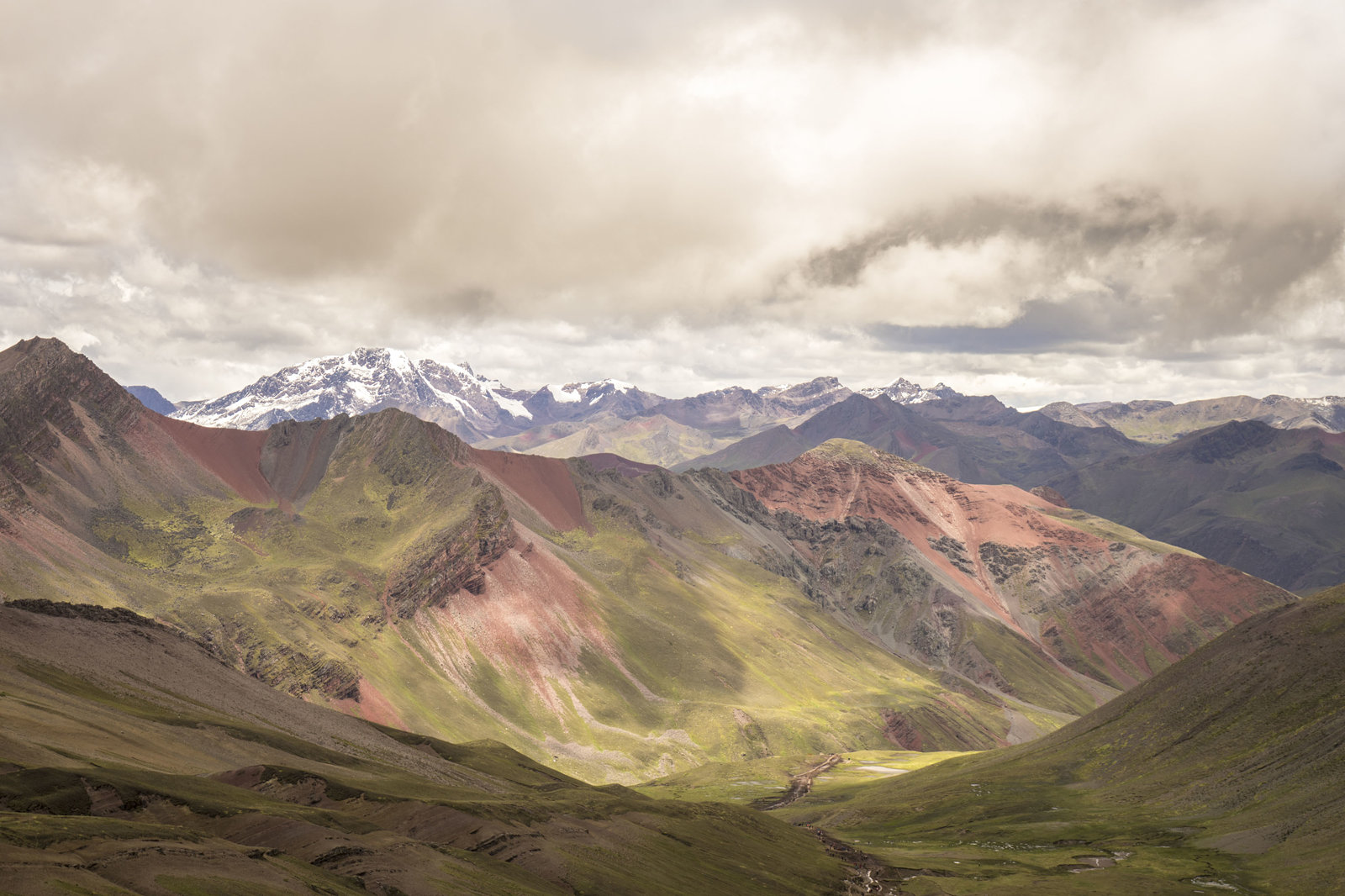