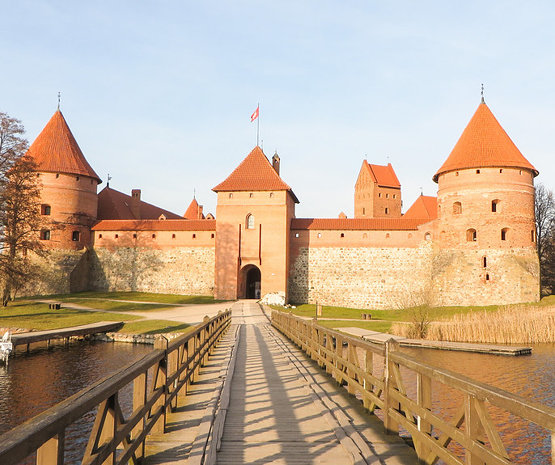 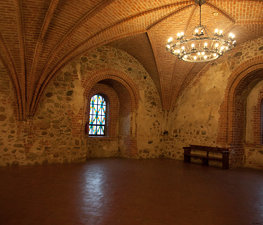 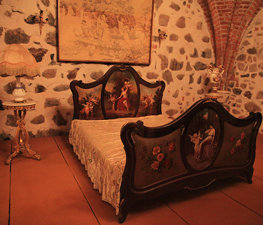 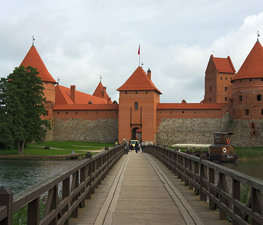 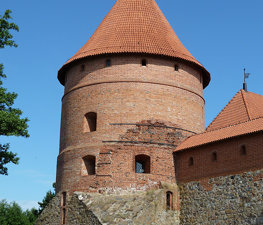 Trakai Island Castle is located in Trakai, Lithuania on an island on the shores of Lake Galvė. The castle is sometimes referred to as "Little Marienburg". The construction of the stone castle was begun in the 14th century by Kęstutis, and around 1409 major works were completed by his son Vytautas the Great, who died in this castle in 1430. Trakai was one of the main centers of the Grand Duchy of Lithuania and the castle held great strategic importance.

The castle suffered major damage during an attack by the Teutonic Knights in 1377. After the assassination of Kęstutis, a power struggle between Jogaila and Vytautas the Great for the title of Grand Duke of Lithuania began. The castle was besieged by both sides. Soon after the reconciliation between Jogaila and Vytautas, the second phase of construction started and continued until 1409. This phase is regarded as the major development in the history of the castle. Apparently, during the truce with the Teutonic Order, the construction works were supervised by the Order's stonemason Radike, four years before the Battle of Grunwald.

During the second phase, two wings were added, and on the southern side a 6 story (35 m. high) donjon was built. The donjon had movable gates which separated the palace from the forecastle. The donjon was used for several functions; besides serving as another defensive structure, it had a chapel and living quarters. It was linked to the multistory Ducal Palace, which had an inner yard. The inner yard had wooden galleries, which ran around the inner wall; these galleries were used to access various support facilities without going inside the palace itself.

The entire southern wing of the southern palace was used for the Ducal Hall. This hall was around 10 x 21 meters in size, and only the Upper Palace in the Vilnius Castle Complex managed to surpass it. The Ducal Hall has preserved some of its original décor.

The principal construction material was so-called red Gothic bricks. Stone blocks were used only in the foundations and the upper parts of buildings, towers and walls. The castle was decorated in a variety of ways, including glazed roof tiling, burned bricks, and stained glass windows. Its overall style after the second construction phase could be described as Gothic with some Romanesque features.

The expansion of the forecastle in the early 15th century marked the third phase of Trakai's development. The walls of the forecastle were strengthened to a thickness of 2.5 meters and raised with additional firing galleries. Three major defensive towers were constructed on the corners. The southwestern tower was also used as a prison. The top story of the towers was designed for soldiers and housed a large number of cannons. A main gatehouse was also constructed which, along with the Ducal Palace donjon, had movable gates. The gatehouse was reinforced with additional sections for firing galleries. Near the inner walls several buildings were constructed, including stables, kitchens, and other support structures. When the castle was undergoing this expansion in the 15th century, the water level of Lake Galvė was several meters higher than it is today. The castle builders took advantage of this by separating the Ducal Palace and the forecastle with a moat, just wide enough for small boats to sail through. They were connected by gates that could be raised in case of an enemy attack.

Trakai Island Castle lost its military importance soon after the Battle of Grunwald, when the chief enemy of the Grand Duchy of Lithuania was defeated by the Lithuanian-Polish army. The castle was transformed into a residence and newly decorated from the inside. New frescos were painted on its walls, which have been partially preserved. Foreign emissaries were welcomed in the Ducal Palace. It is known that Jogaila visited the castle thirteen times between 1413 and 1430. In 1414, the Flemish traveler Guillebert de Lannoy described the castle in these words: Шаблон:Cquote

Grand Duke Vytautas the Great died in the castle without being crowned as King of Lithuania in 1430. During the rule of Sigismund Augustus, the castle was redecorated in a Renaissance style, and it served as the royal summer residence for a short period of time. Lithuanian Metrica was kept in the castle until 1511. Later the castle served as a prison. During the wars with Muscovy in the 17th century, the castle was damaged and was not reconstructed again. It gradually fell into disrepair.

During the 19th century, castle reconstruction plans were prepared. Its original frescos were preserved and copied by Vincentas Smakauskas. The Imperial Archaeological Commission initiated the documentation of the remaining castle in 1888. In 1905 the Imperial Russian authorities decided to partially restore the castle ruins. During World War I, Germans brought in their specialists, who made several attempts to restore the castle. In 1935-1941 parts of the Ducal Palace walls were strengthened, and the southeastern forecastle tower was rebuilt, including sections of its walls. Lithuanian and Polish preservationists worked on the project, but the work stopped when the war gained in intensity. After World War II, a major reconstruction project was begun in 1946; active work started in 1951-1952. The major portion of the reconstruction was finished in 1961. The castle was reconstructed in a 15th century style.

Andreas Richter
Nice area and impressive castle but lot of people during the weekend. You can have a good lunch opposite to the castle in the lounge enjoying the view on the lake.

Kacka O
Absolutely worth to take a trip! It takes aprox 30 mins by bus from Vilnius and one way ticket costs only 1.77 euro. Dont forget to taste their famous yummy kybinai from "foodtruck" near to the river

Cenker Köse
Beautiful castle and it is full of furnitures; the amazing thing is that people, who used to live here, had used all of the items you see inside. It is worth to visit; even for the bridge entrance!

Ilya Sadretdinov
Beautiful castle, but the museum part inside is not worth visiting. Night lighting is also quite good and romantic. Also, there's a nice restaurant opposite the castle, leftish from the bridge.

Irina
A must-go place when in Lithuania. Beautifully restored historical monument in a picturesque setting. Enjoy a walk outside the castle walls on a late spring day. It's a memorable place.

Tori Sovak
Very cool! Costs about 6-8 euros to see the inside though. But there's food, shops, and boating all in this area. Definitely recommend.
Load more comments
foursquare.com
8.8/10
Александр Крутиков, Chris Romas and 171,181 more people have been here
I've been here
Add to wishlist

Trakai Peninsula Castle is one of the castles in Trakai, Lithuania. It

Vingis Park is the largest park in Vilnius, Lithuania. Located at a

The Lithuanian Academy of Music and Theatre in Vilnius, Lithuania, is 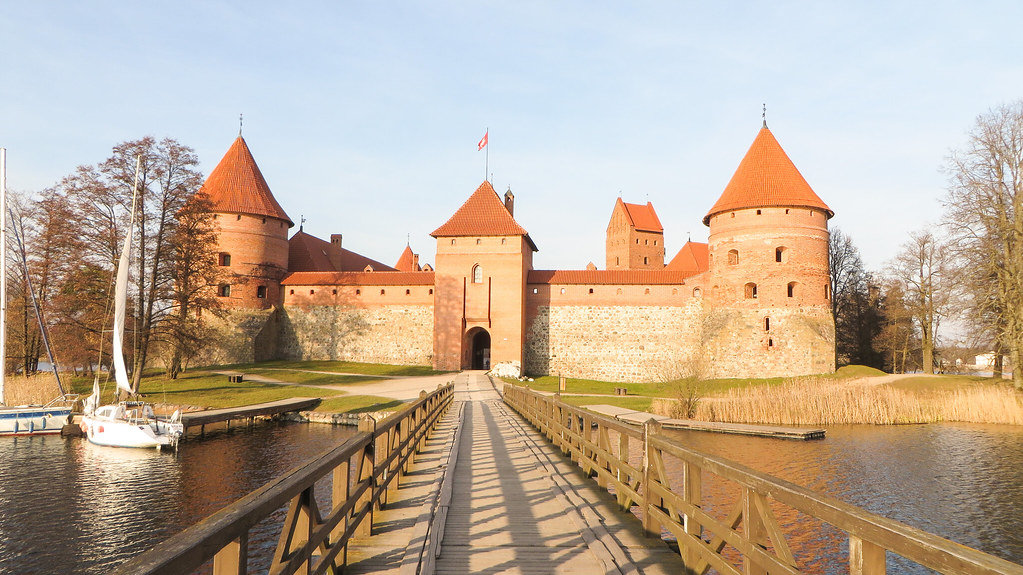 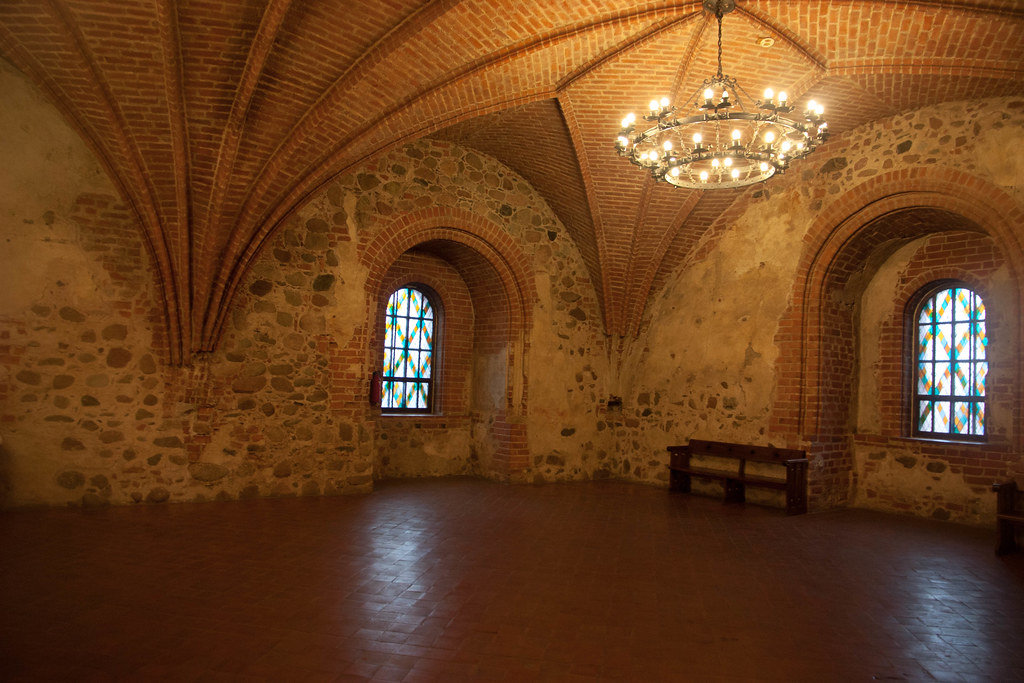 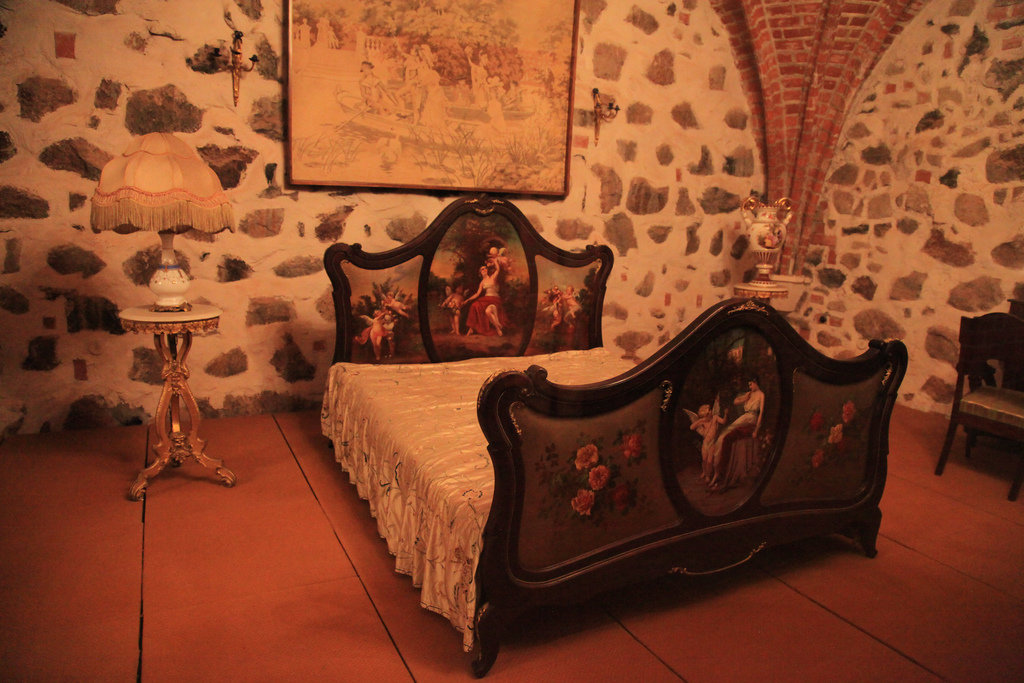 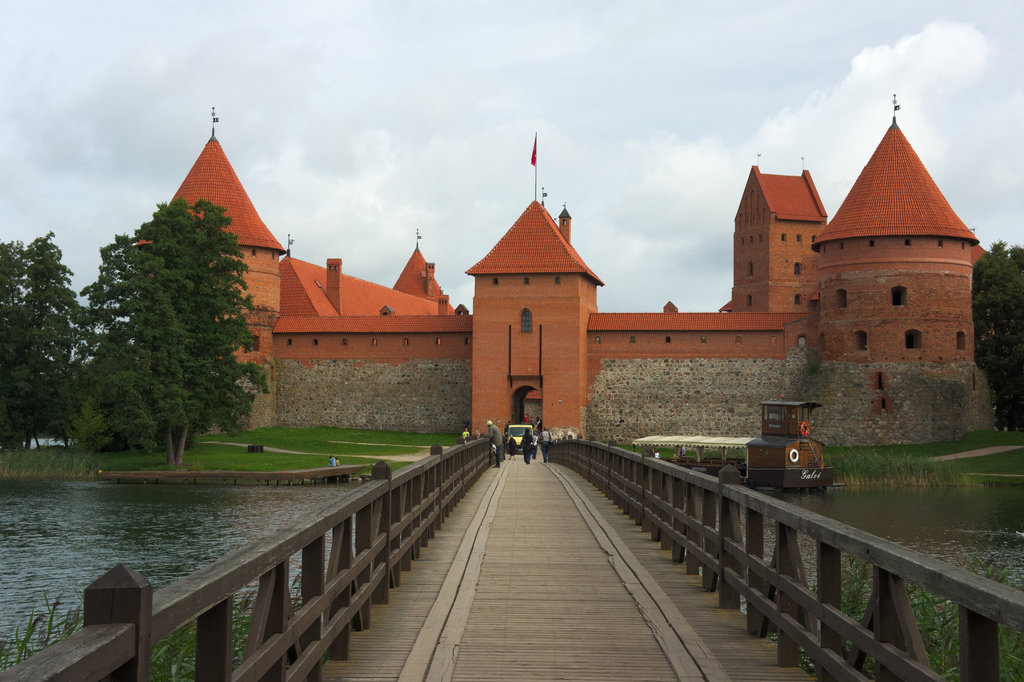 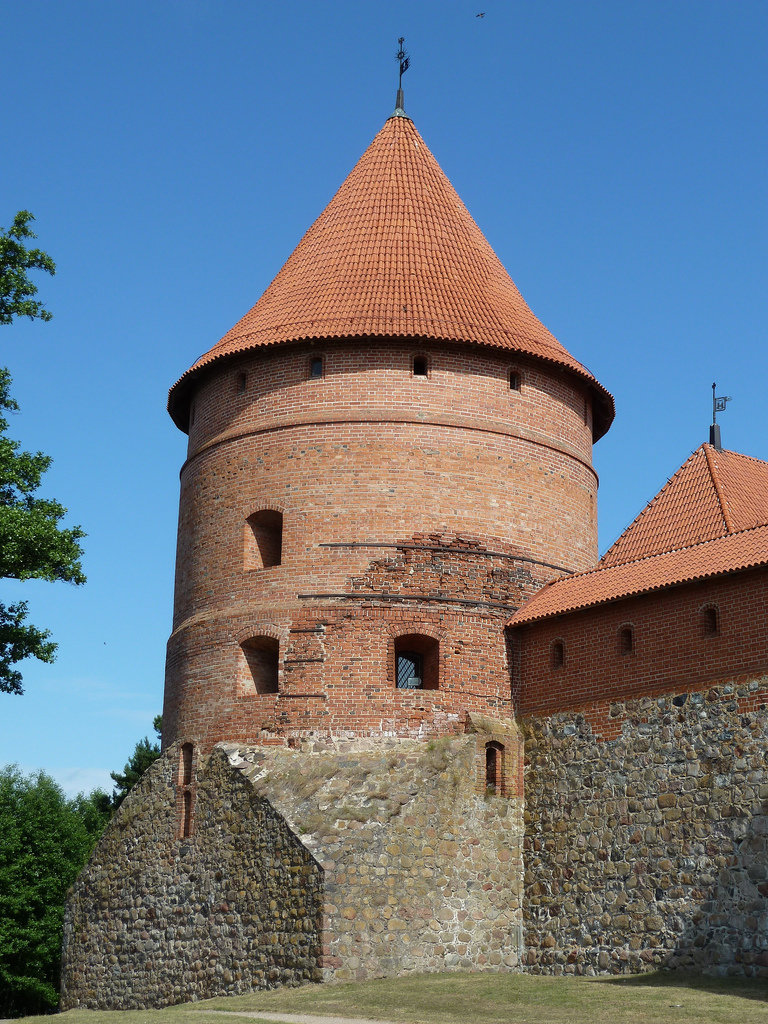 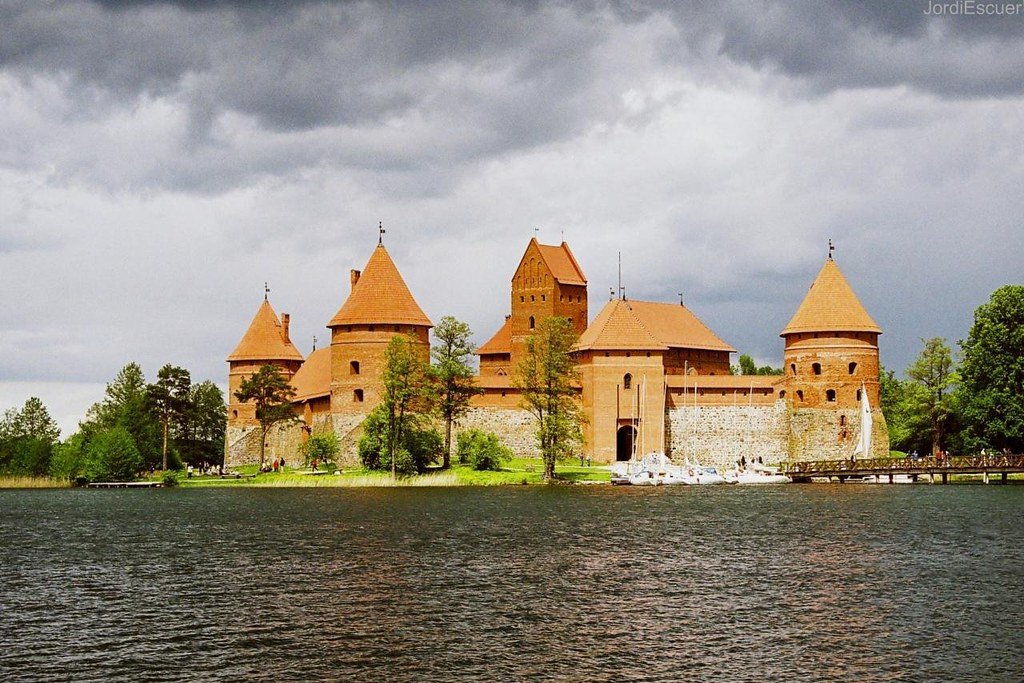 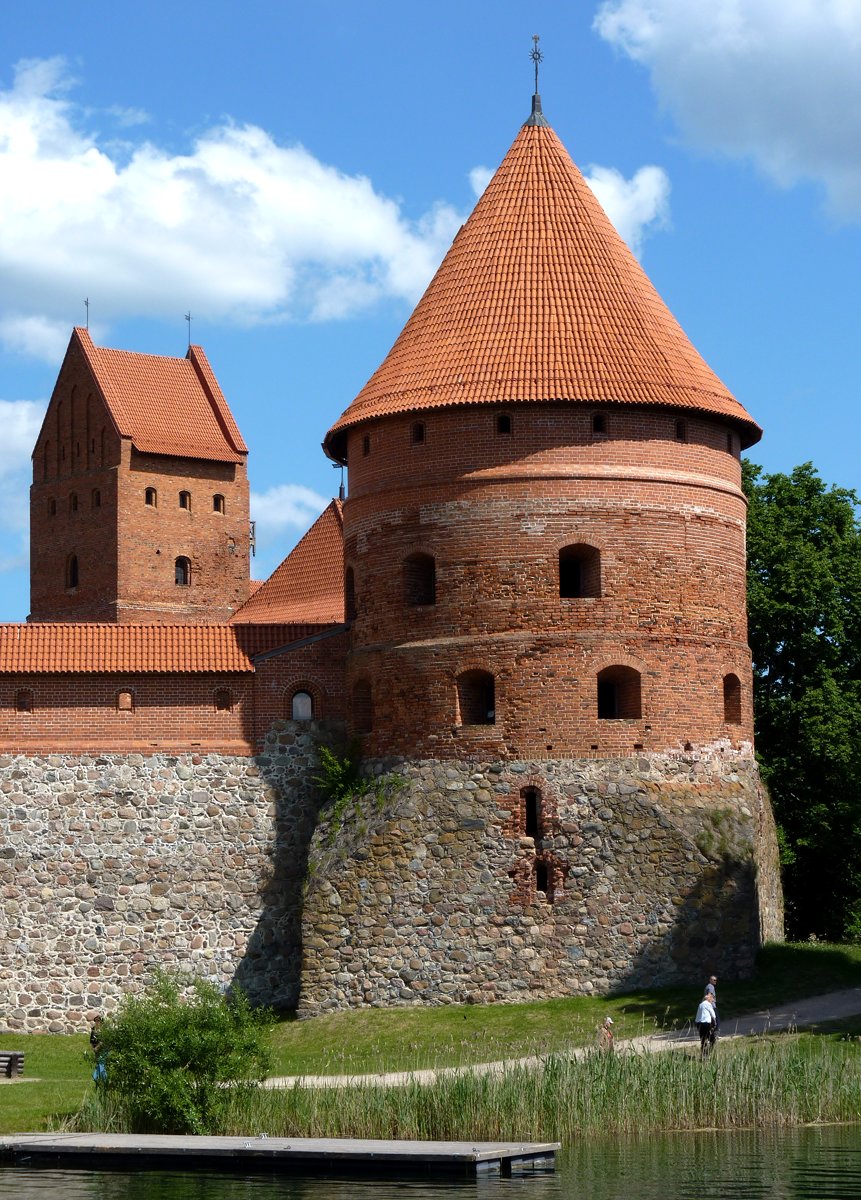 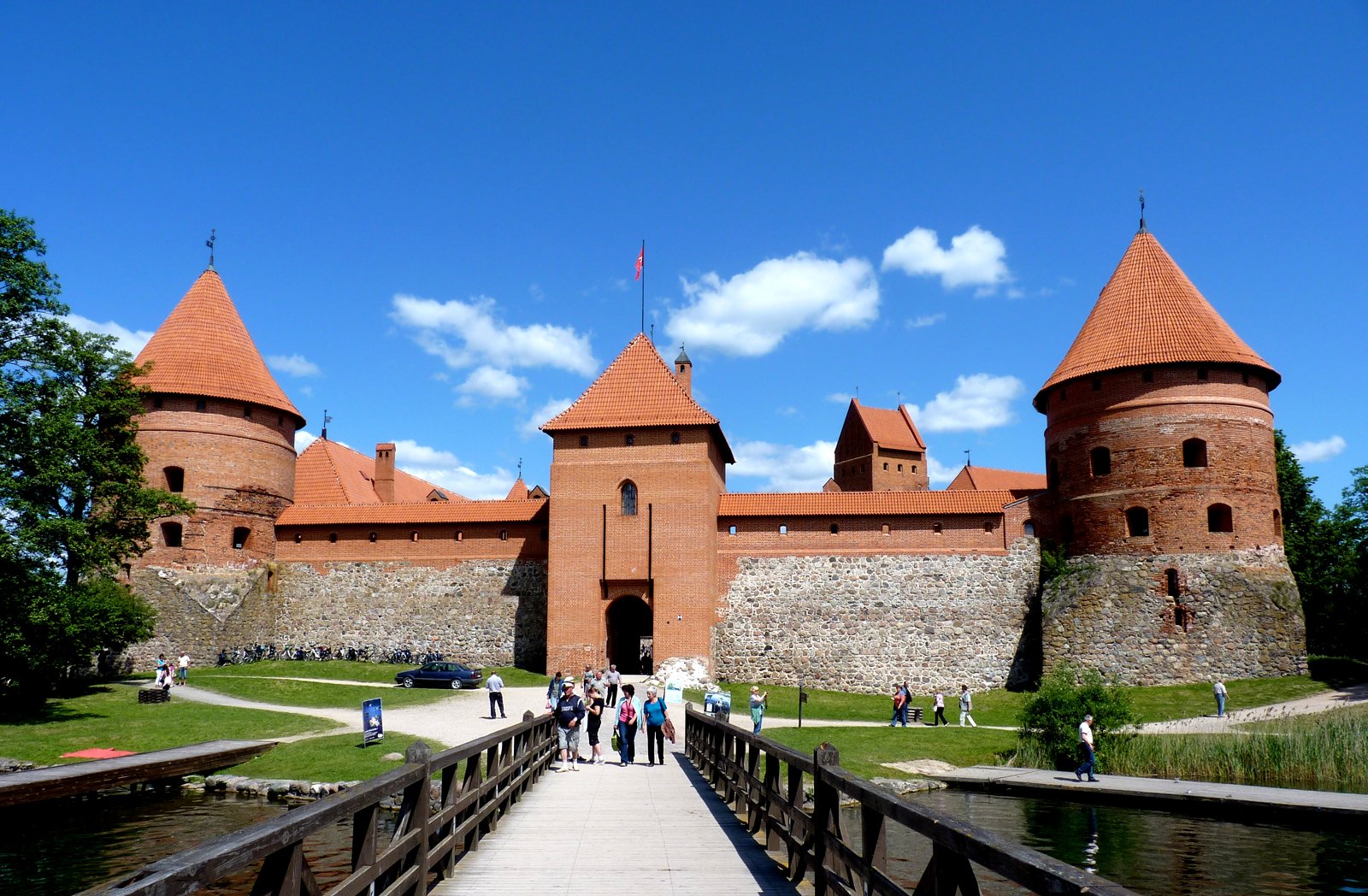 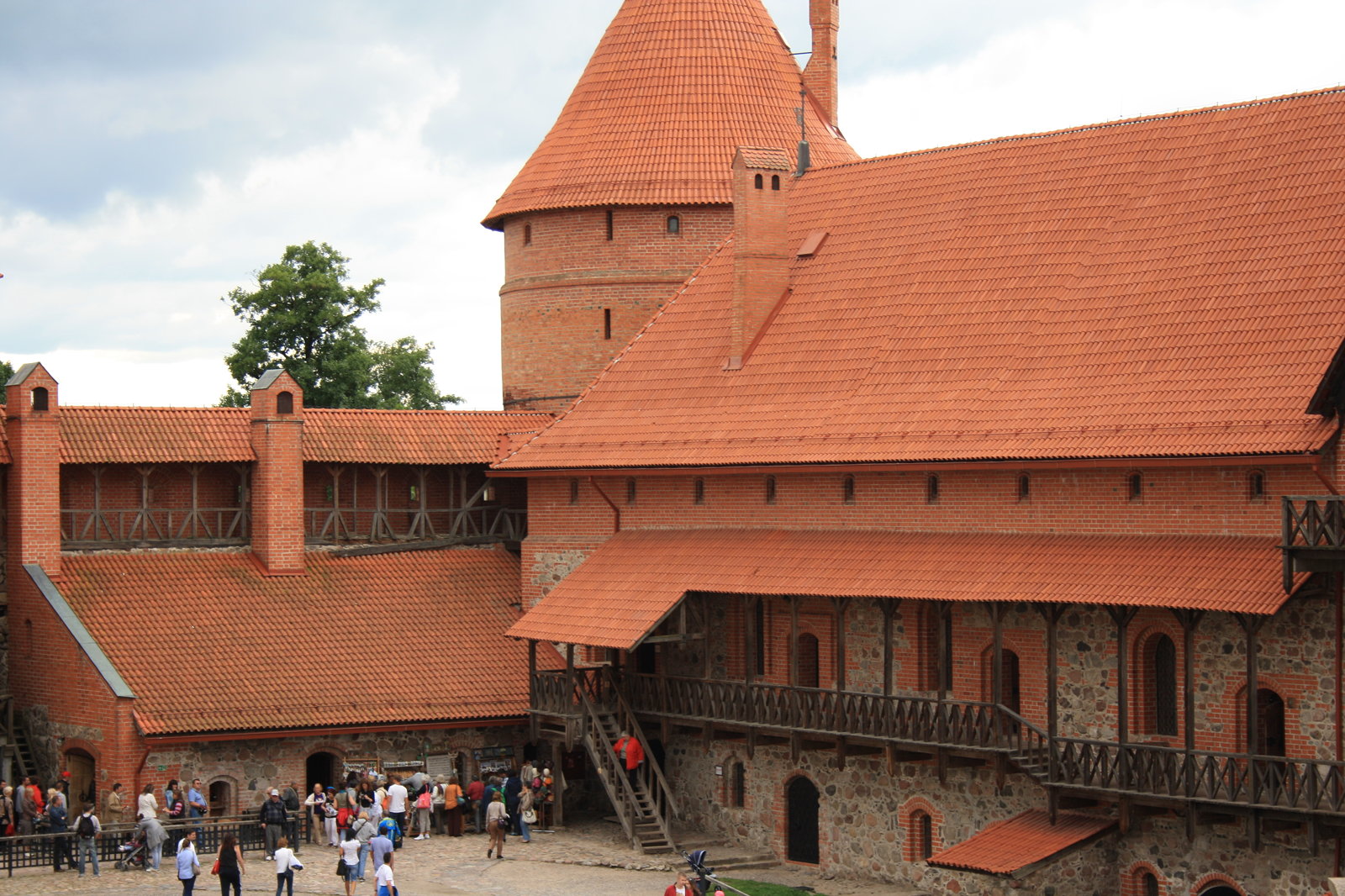 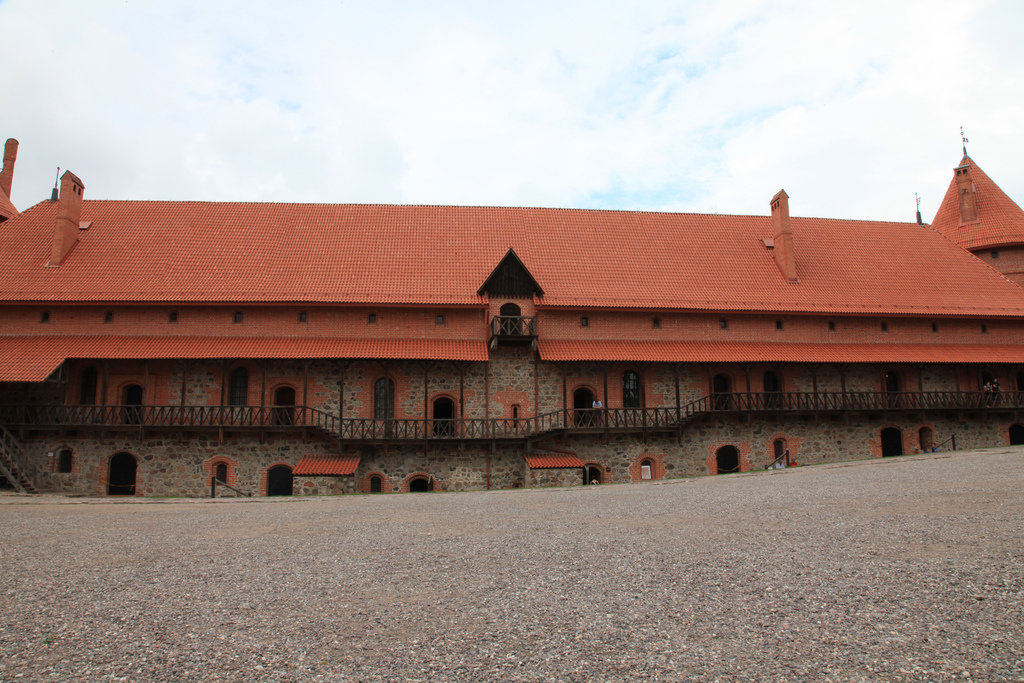 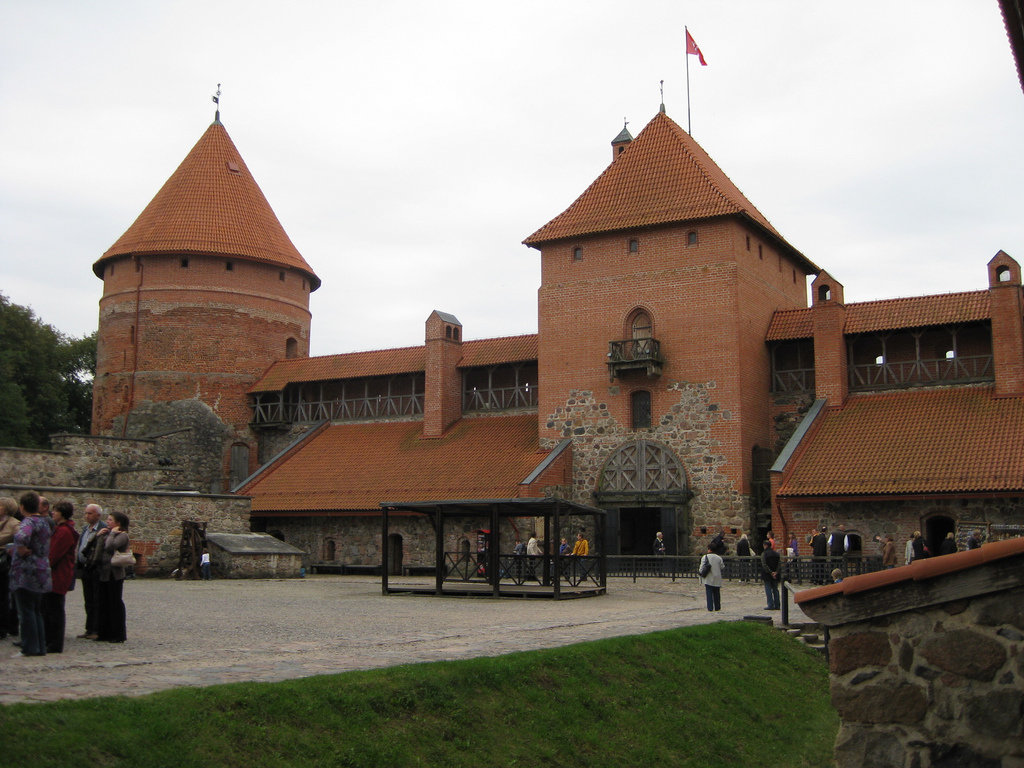 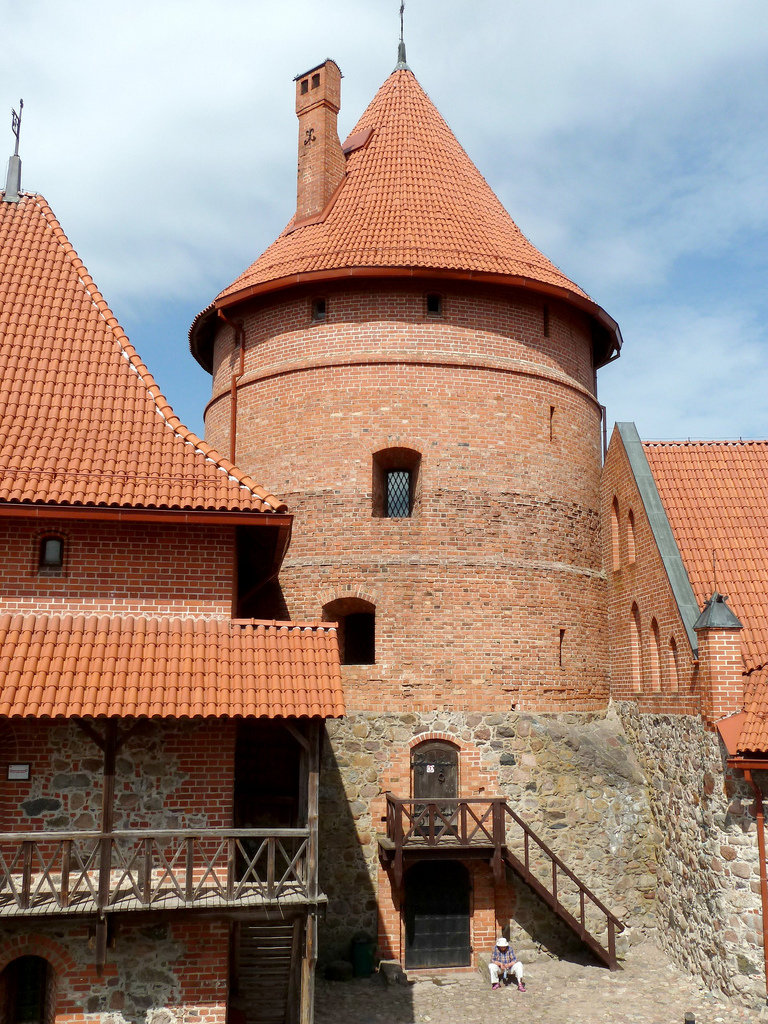 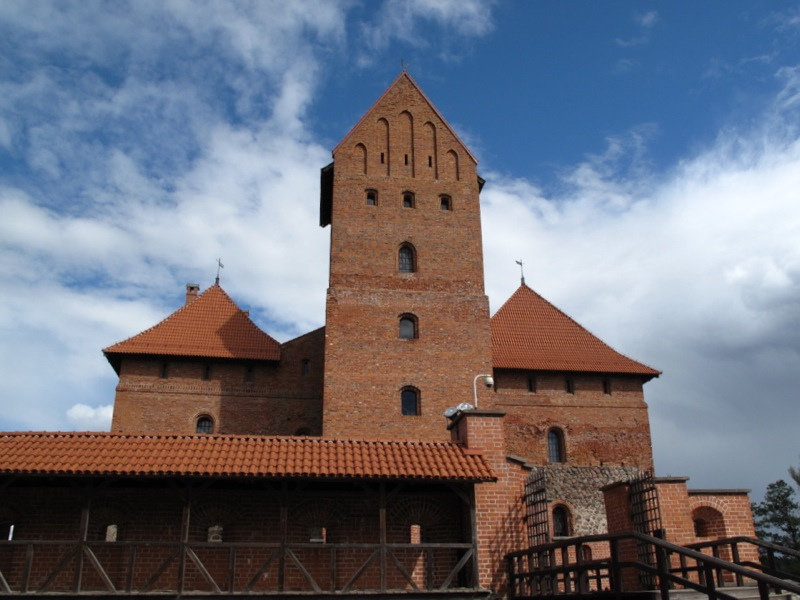 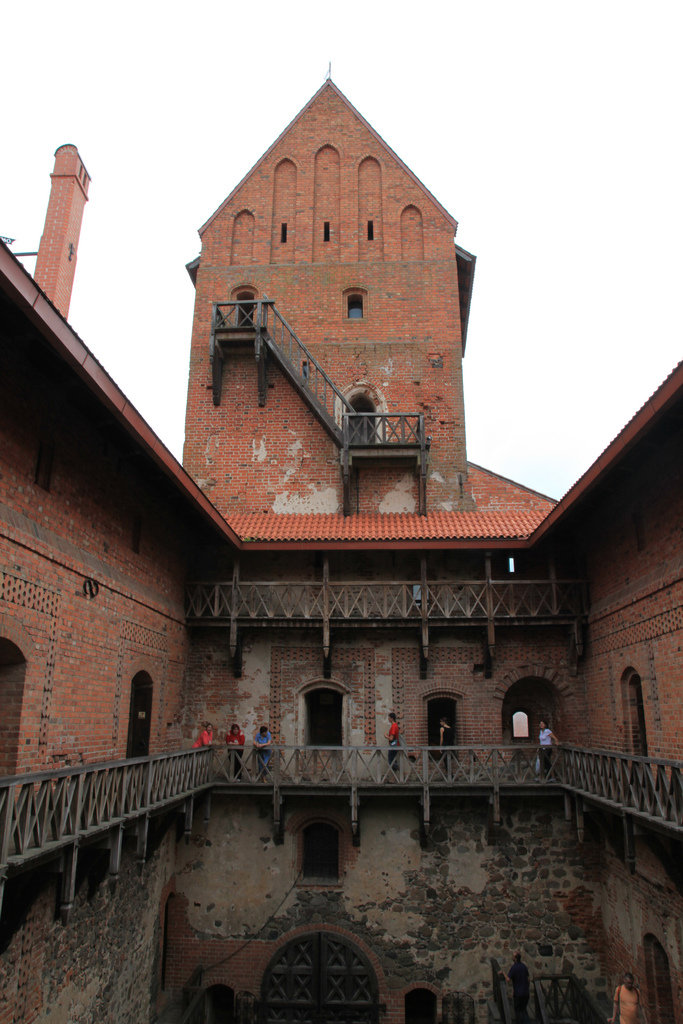 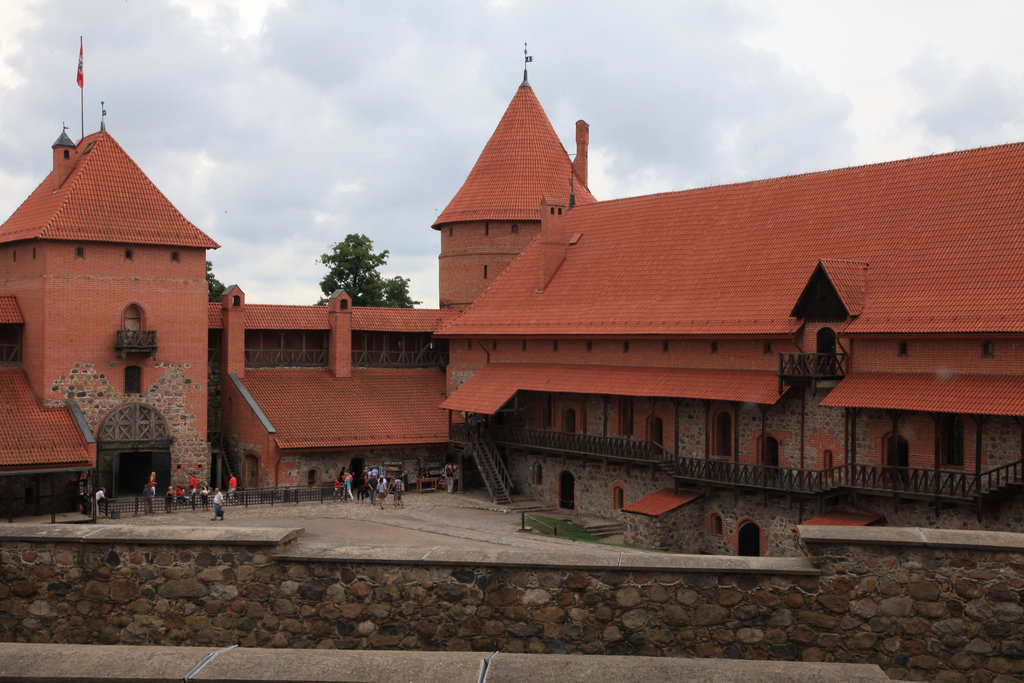 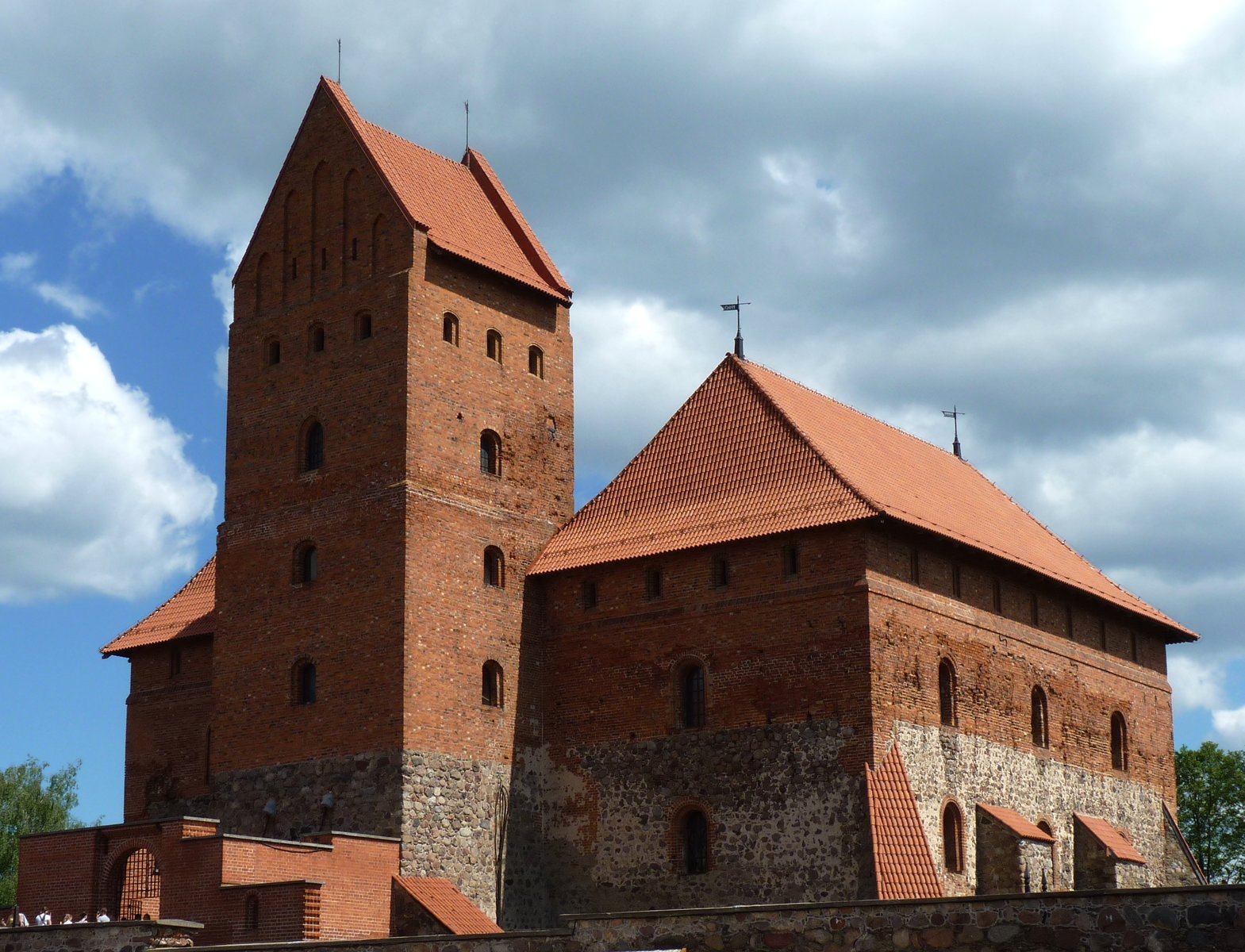 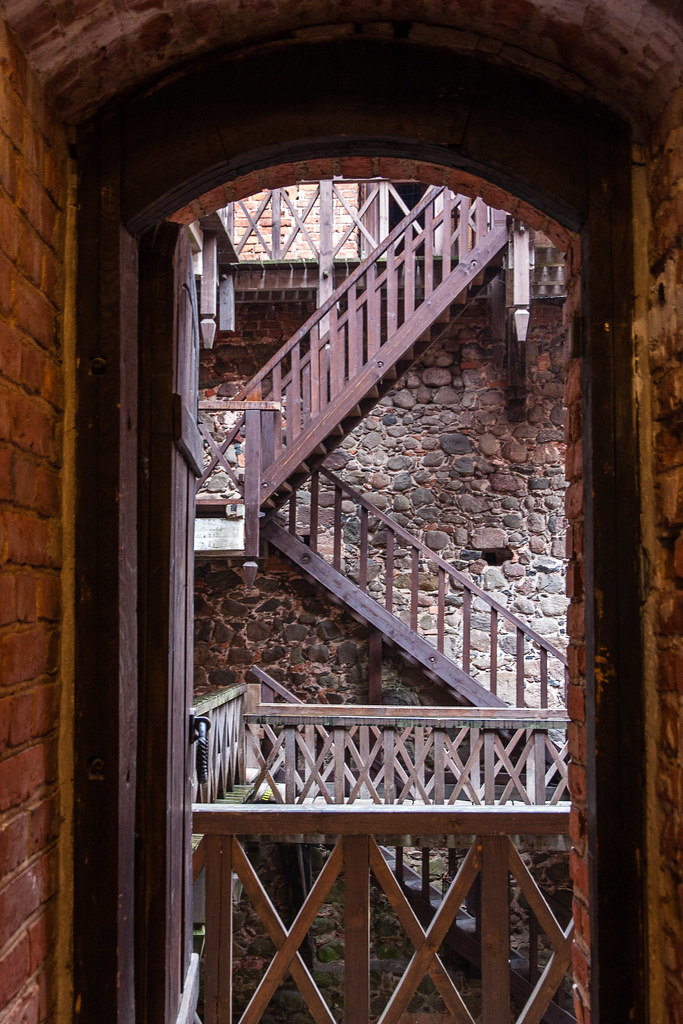 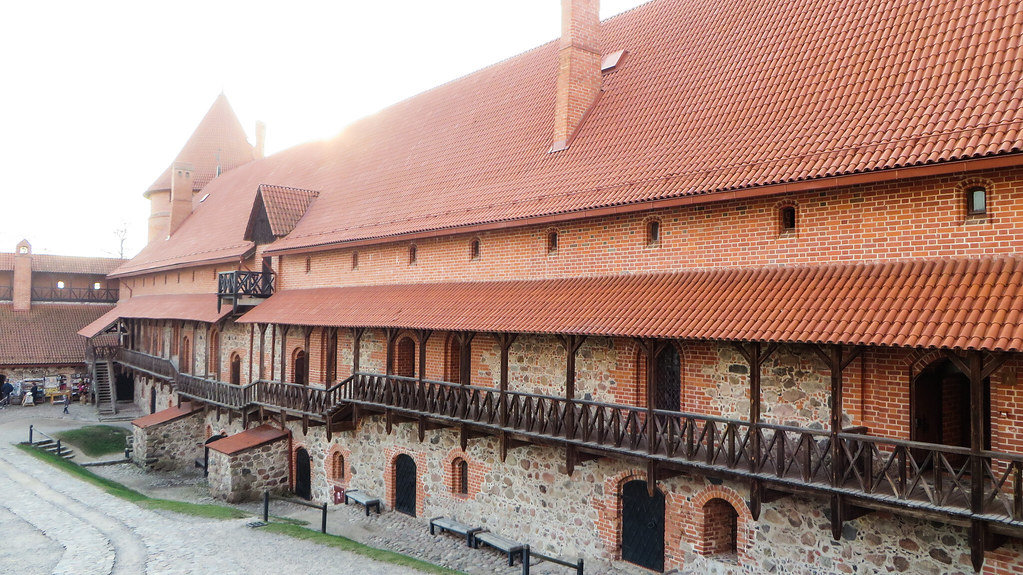 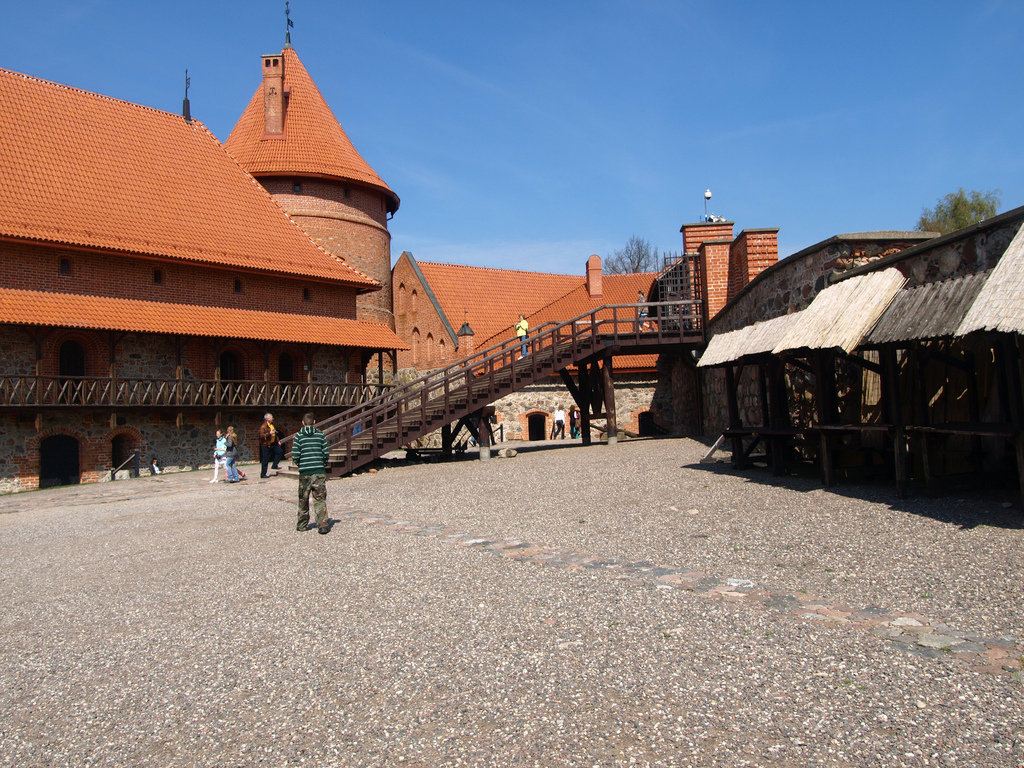 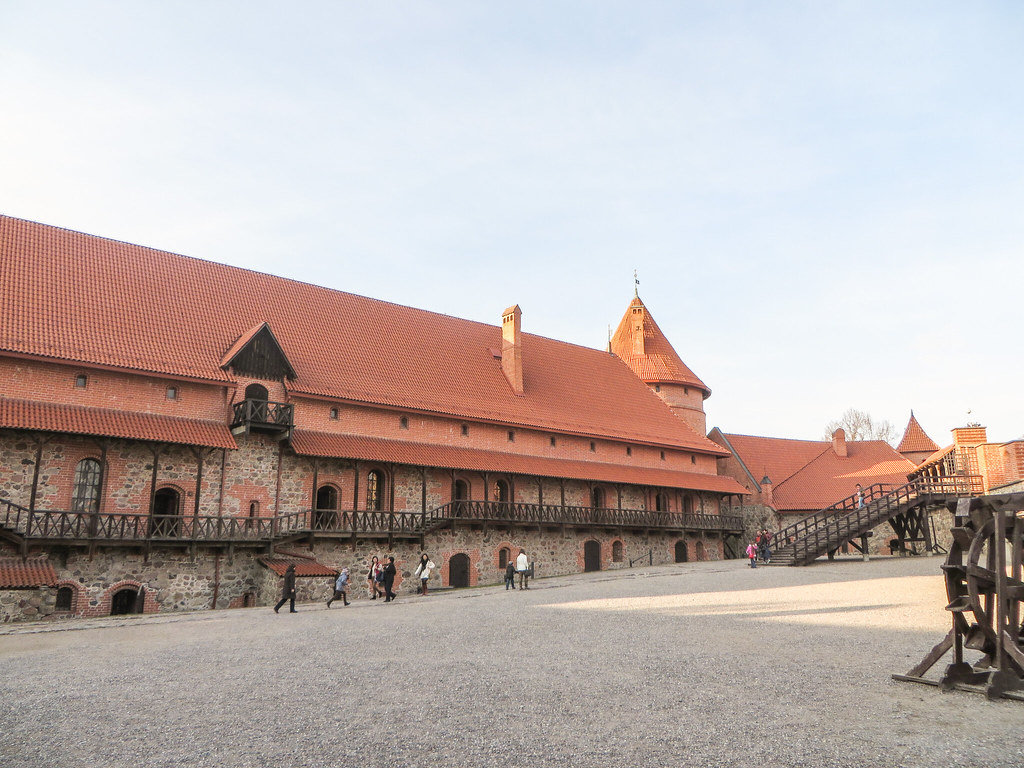