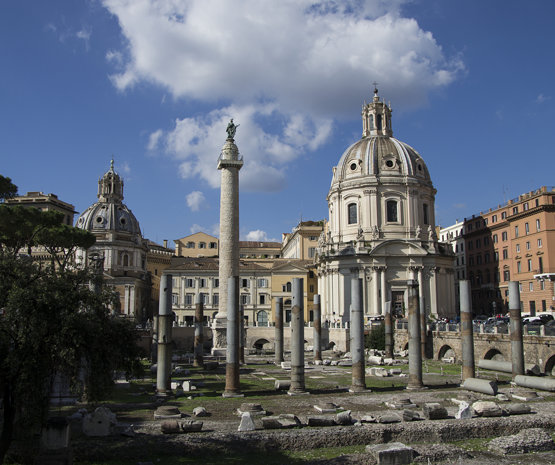 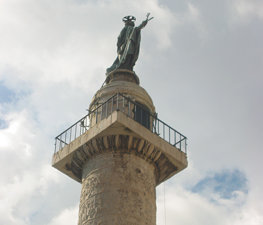 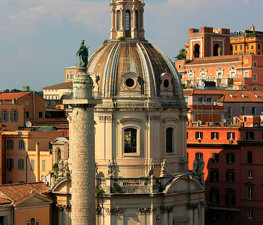 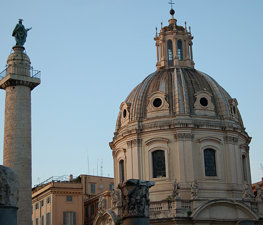 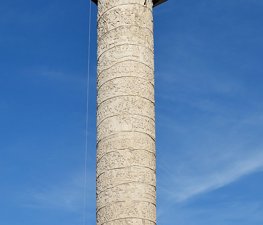 Trajan's Column is a monument in Rome raised in honour of the Roman emperor Trajan and probably constructed under the supervision of the architect Apollodorus of Damascus at the order of the Roman Senate. It is located in Trajan's Forum, built near the Quirinal Hill, north of the Roman Forum. Completed in 113, the freestanding column is most famous for its spiral bas relief, which commemorates Trajan's victory in the Dacian Wars. Its design has inspired numerous victory columns, both ancient and modern.

The structure is about 30 meters (98 ft) in height, 38 meters (125 ft) including its large pedestal. The shaft is made from a series of 20 colossal Carrara marble drums, each weighing about 40 tons, with a diameter of 3.7 meters (11 ft). The 190 meter (625 ft) frieze winds around the shaft 23 times. Inside the shaft, a spiral staircase of 185 stairs provides access to a viewing platform at the top. The capital block of Trajan's Column weighs 53.3 tons which had to be lifted to a height of ca. 34 m.

Ancient coins show the column originally topped with a statue of a bird, probably an eagle, and later by a heroically nude statue of Trajan himself, which disappeared in the Middle Ages. On December 4 1587, the top was crowned by Pope Sixtus V with a bronze figure of St. Peter, which remains to this day.

The two sections are separated by a personification of Victory writing on a shield flanked on either side by Trophies. Otherwise, the scenes on the frieze unfold continuously and in tipped-up perspective. The imagery is not realistic as the sculptor pays little attention to perspective. Often a variety of different perspectives are used in the same scene, so that more can be revealed (e.g. a different angle is used to show men working behind a wall).

The scenes depict mostly the Roman army in military activities such as setting out to battle and engaging the Dacians, as well as constructing fortifications and listening to the emperor's address and the successs he accomplished. The carvings are crowded with sailors, soldiers, statesmen and priests, showing about 2,500 figures in all and providing a valuable source of information for modern historians on Roman and barbaric arms and methods of warfare (such as forts, ships, weapons etc.). The relief shows such details as a ballista or catapult for example. The emperor Trajan, depicted realistically (not superhuman), makes 59 appearances among his troops.

The interior of Trajan's column is hollow: entered by a small doorway at one side of the base, a spiral stair of 185 steps gives access to the platform above, having offered the visitor in antiquity a magnificent view over the surrounding Trajan's forum; 43 window slits illuminate his ascent.

The column stands 38.4 m high from the ground to the top of the statue base: Located immediately next to the large Basilica Ulpia, it had to be constructed sufficiently tall in order to function as a vantage point, and to maintain its own visual impact on the forum. The column proper, that is the shaft without the pedestal, the statue and its base, is 29.76 m high, a number which almost corresponds to 100 Roman feet; beginning slightly above the bottom of the base, the helical staircase inside measures a mere 8 cm less.

The column is composed of 29 blocks of Luna marble, weighting in total more than 1100 t. The spiral stair itself was carved out of 19 blocks, with a full turn every 14 steps; this arrangement required a more complex geometry than the more usual alternatives of 12 or 16. The quality of the craftsmanship was such that the staircase is practically even, and the joints between the huge blocks still fit accurately. Despite numerous earthquakes in the past, the column today leans at an angle of less than half a degree.

Trajan's column, and especially its helical stairway design, exerted a considerable influence on subsequent Roman architecture. While spiral stairs were before still a rare sight in Roman buildings, this space-saving form henceforth spread gradually throughout the empire. Apart from the practical advantages it offered, the design also became closely associated with imperial power, being later adopted by Trajan's successors Antoninus Pius and Marcus Aurelius. In Napoleon's time, a similar column decorated with a spiral of relief sculpture was erected in the Place Vendôme in Paris to commemorate his victory at Austerlitz.

The inscription at the base of the column in finest lettering reads:

The Senate and people of Rome [give or dedicate this] to the emperor Caesar, son of the divine Nerva, Nerva Traianus Augustus Germanicus Dacicus, pontifex maximus, in his 17th year in the office of tribune, having been acclaimed 6 times as imperator, 6 times consul, pater patriae, to demonstrate of what great height the hill [was] and place [that] was removed for such great works.

It was believed that the column was supposed to stand where the saddle between the Capitoline and Quirinal Hills used to be, having been excavated by Trajan, but excavation has revealed that this is not the case. The saddle was where Trajan's Forum and Trajan's Market stood. Hence, the inscription refers to the Trajan's entire building project in the area of the Imperial fora.

This is perhaps the most famous example of Roman square capitals, a script often used for stone monuments, and less often for manuscript writing. As it was meant to be read from below, the bottom letters are slightly smaller than the top letters, to give proper perspective. Some, but not all, word divisions are marked with a dot, and many of the words, especially the titles, are abbreviated. In the inscription, numerals are marked with a titulus, a bar across the top of the letters. A small piece at the bottom of the inscription has been lost.

The typeface Trajan, designed in 1989 by Carol Twombly, uses letterforms based on this inscription. There have been many other typefaces based on the inscription from such designers as Frederic Goudy.[1]

in 1586 by means of a lifting tower. A similar arrangement was presumably used for the construction of Trajan's Column, but with less available space and thus manpower.]]

It is assumed that the column drums were lifted by cranes into their place. Ancient sources, as well as a substantial corpus of archaeological evidence, prove that Roman engineers were capable of raising large weights clear off the ground. The typical drum of Trajan's Column weighs ca. 32 t, while the capital, the heaviest block above base and pedestal, is even at 53.3 t, which had to be lifted 34 m high. To save weight, the treads had probably been carved out before either at the quarry or in situ.

Even so, for such loads the typical Roman treadwheel crane, which, moreover, could only reach a maximum height of 15 to 18 m, was clearly inadequate. Instead, a tower-like wooden construction was erected around the building site, in the midst of which the marble blocks were raised by a system of pulleys, ropes and capstans; these were powered by a large workforce of men and possibly also draught animals, spread out on the ground. According to modern calculations, eight capstans were needed to hoist the 55 t base block, while the length of rope required for the highest drums measured some 210 m assuming two-block pulleys.

Such a lifting tower was later also used to great effect by the Renaissance architect Domenico Fontana to relocate obelisks in Rome. From his report, it becomes obvious that the coordination of the lift between the various pulling teams required a considerable amount of concentration and discipline, since, if the force was not applied evenly, the excessive stress on the ropes would make them rupture. In case of Trajan's column, the difficulties were exacerbated even further by the simultaneous work on the neighbouring Basilica Ulpia, which limited the available space so that the capstan crews had proper access only from one side.

It was traditionally thought that the Column was a propagandistic monument, glorifying the emperor's military exploits. However, the structure would have been generally invisible and surrounded by the two libraries in Trajan's Forum, and because of the difficulty involved in following the frieze from end to end, it could be said to have had much less propaganda value.

On the other hand, as Paul Veyne notes, the relief could be read "vertically" from below, with the stereotypical, highly recognizable figure of the emperor recognizable across the bands of images— just as, on the Colonne Vendôme, Napoleon's figure can be picked up, scene after scene.

After Trajan's death in 117, the Roman Senate voted to have Trajan's ashes buried in the Column's square base which is decorated with captured Dacian arms and armor. His ashes and those of his wife, Plotina, were set inside the base in golden urns. (The ashes no longer lie there.)

Plaster casts of the relief were taken in the 19th and 20th centuries. After a century of acid pollution, they are now more legible in some details than the original, and the way they are displayed offers students a closer look at the reliefs than at the original site. Examples can be studied at:

Additionally, individual casts of the frieze are at display in various museums, for example in the in Mainz. A complete survey in monochrome was published by the German archaeologist Conrad Cichorius between 1896 and 1900 (see Commons), still forming the base of modern scholarship.

in Vienna, flanked by two columns styled after the Roman archetype]]

Boaz Sachs
Everywhere you turn Rome offers a historic treat. This column has a lot of History and is a lovely to stumble upon, particularly during sunset

المهره الصعبه ماهي لأي خيال
One of the sights in Rome that you really need to visit. Built in 113 to celebrate emperor Trajan's victory over the Dacians.

Miguel Angel Baeyens
Another monument in Rome you can miss by inches going to Colosseo via Foro. Stop by and read about the history carved on the column and see Saint Peter on top of it

Jan Freeman
A sight to see. The stairwell that goes to the top isn't open to the public but still worth a visit to this impressive structure

The Monumento Nazionale a Vittorio Emanuele II (National Monument of

The Piazza Venezia is a piazza in central Rome, Italy. It takes its

The Torre delle Milizie ('Tower of the Milices') is a tower in Rome,

The Basilica of St. Mary of the Altar of Heaven (Latina. Basilica

San Marco is a basilica in Rome. Devoted to St. Mark, it was built in

The Palazzo Venezia is a palazzo (palace) in central Rome, Italy, just

The Canadian National Vimy Memorial is a memorial site in France 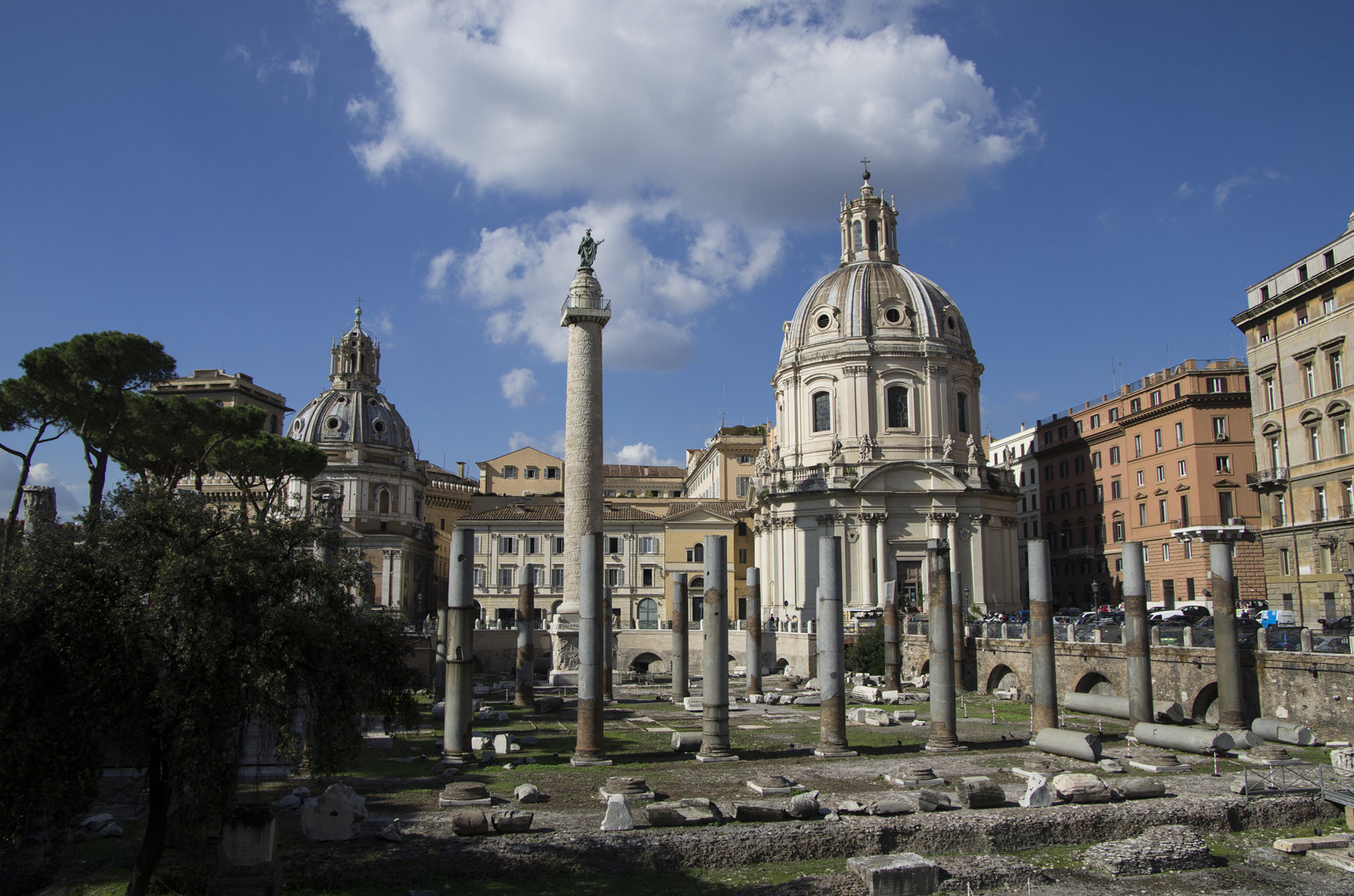 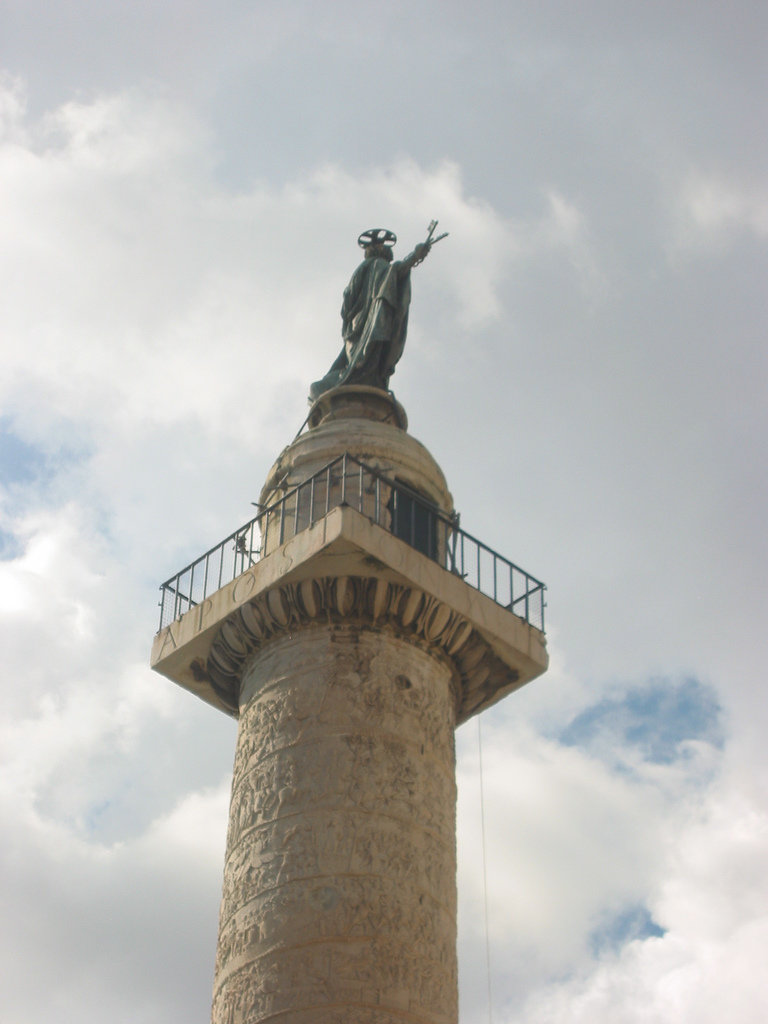 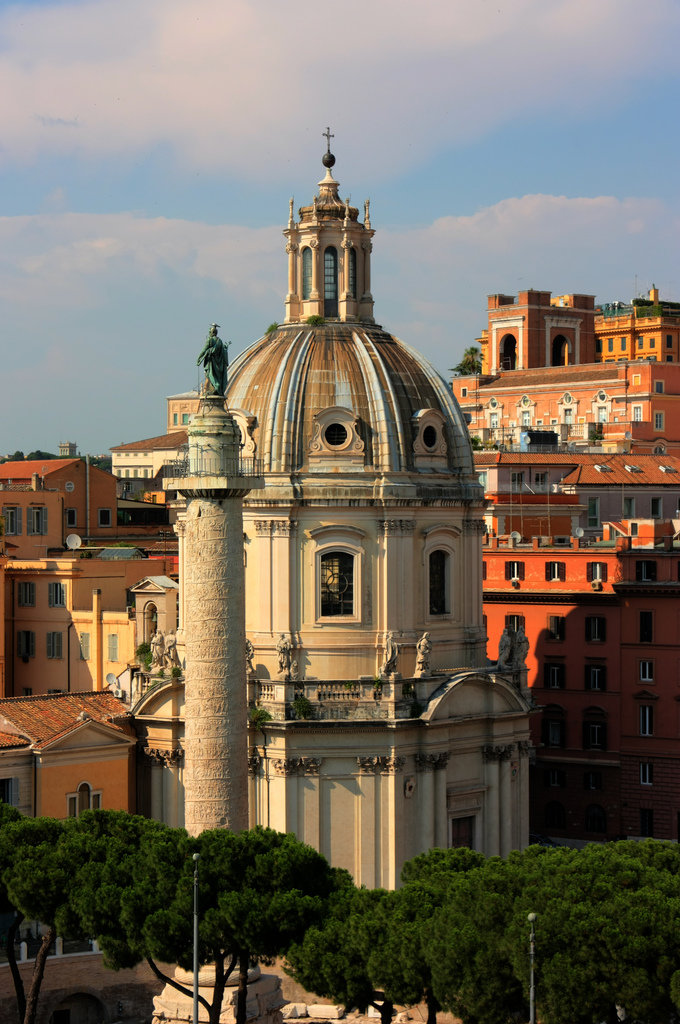 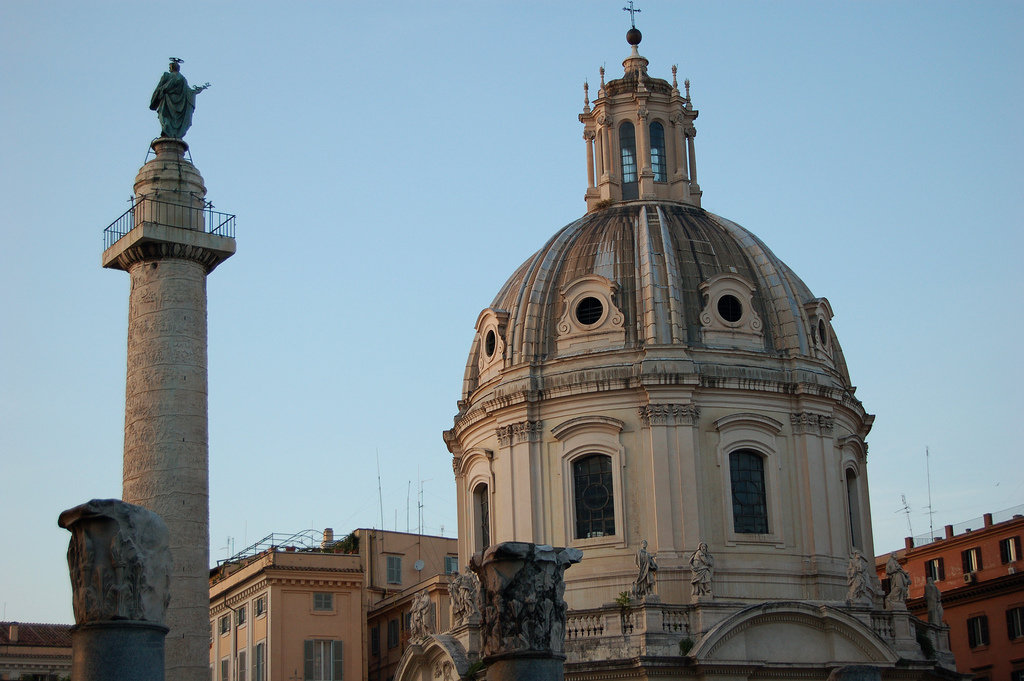 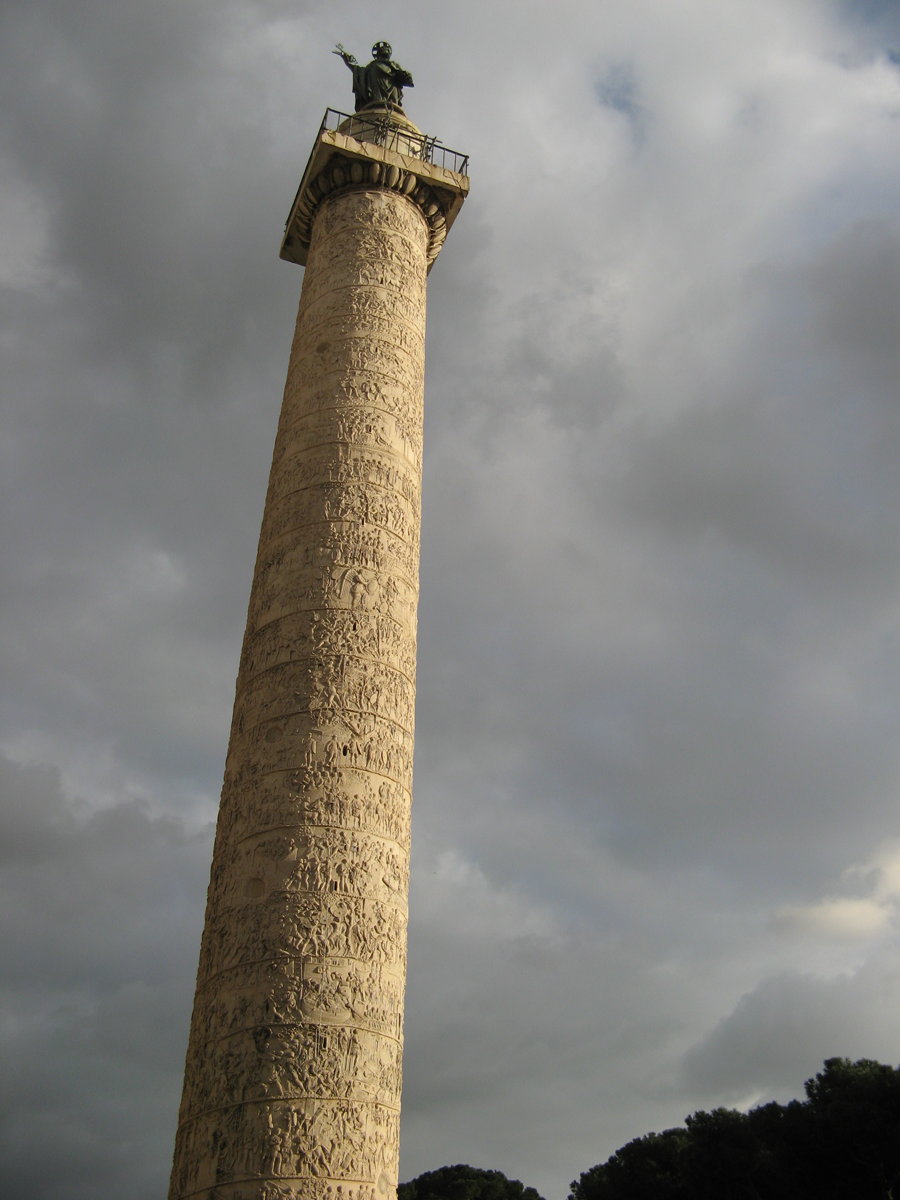 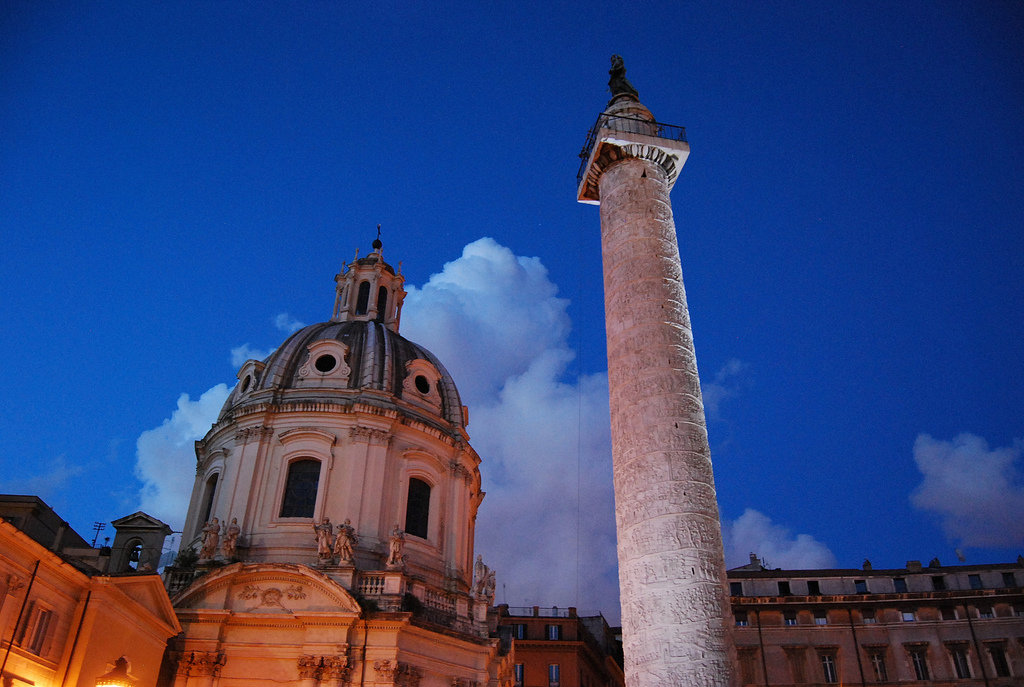 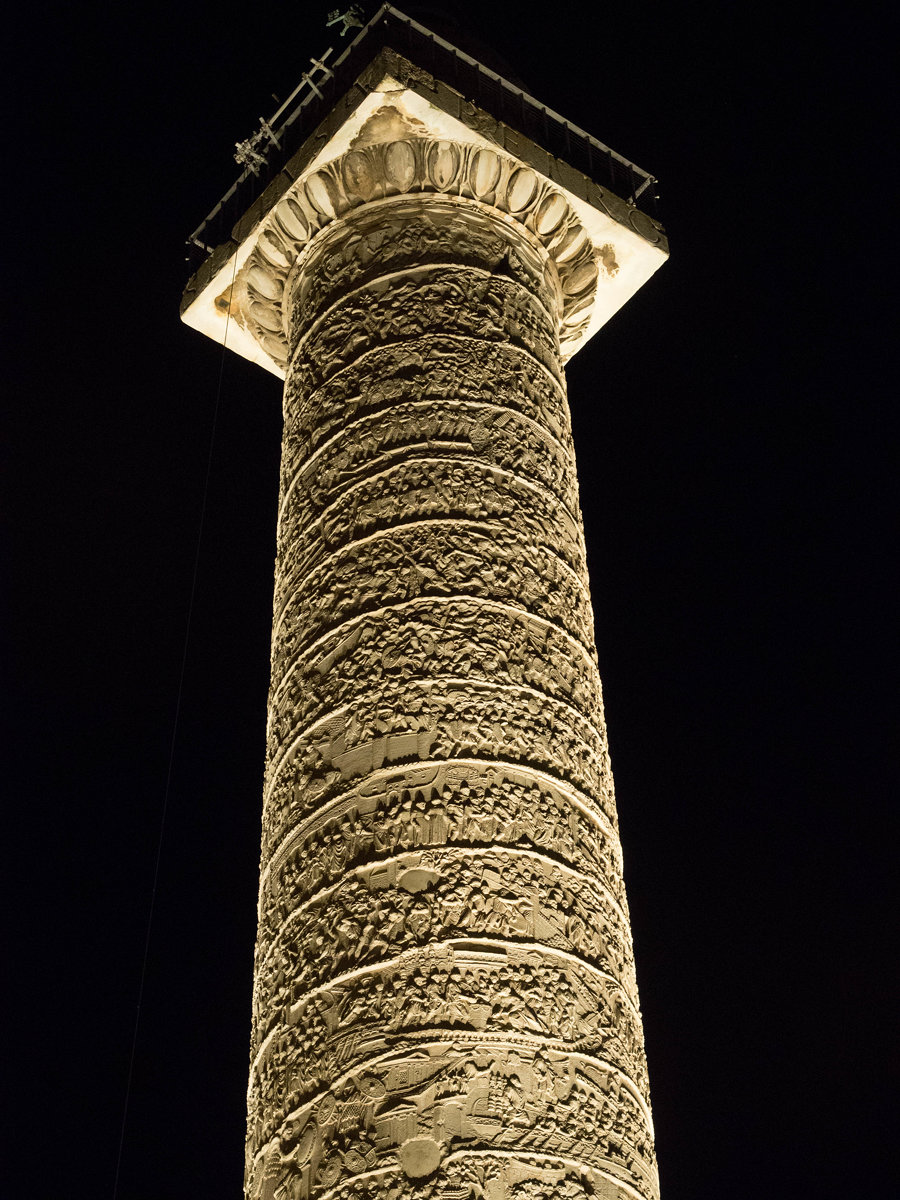 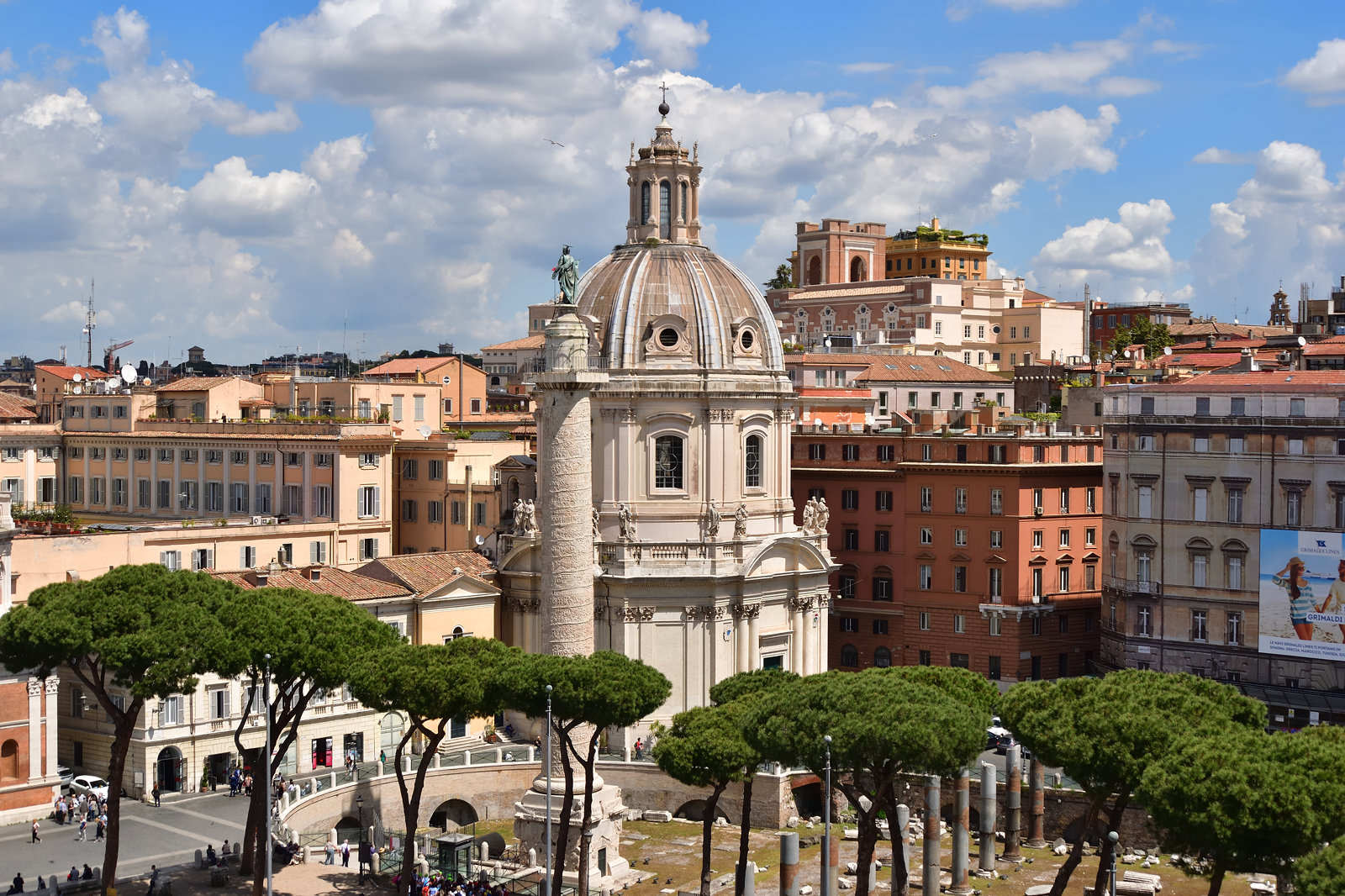 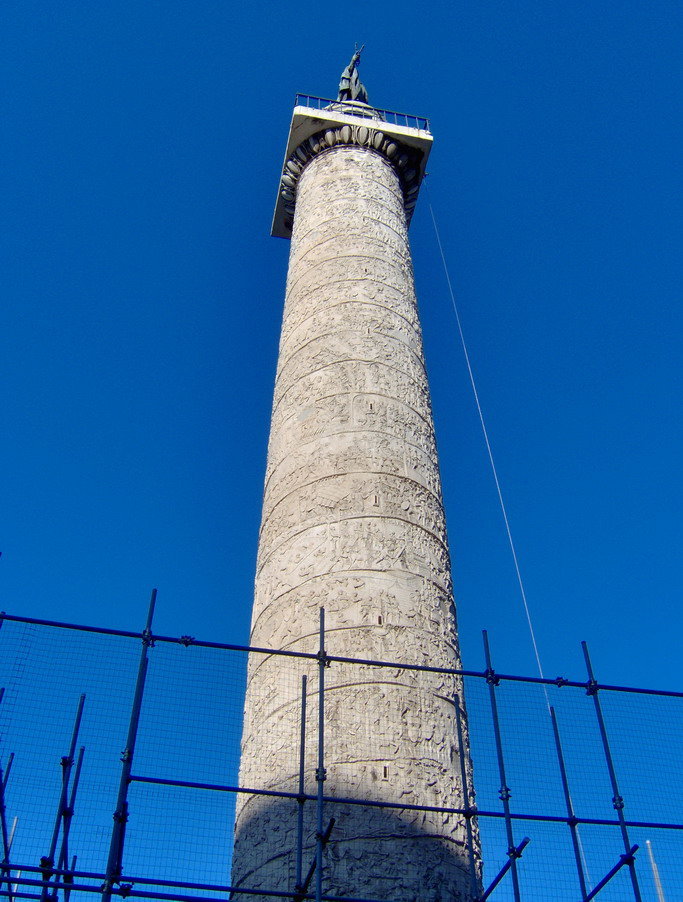 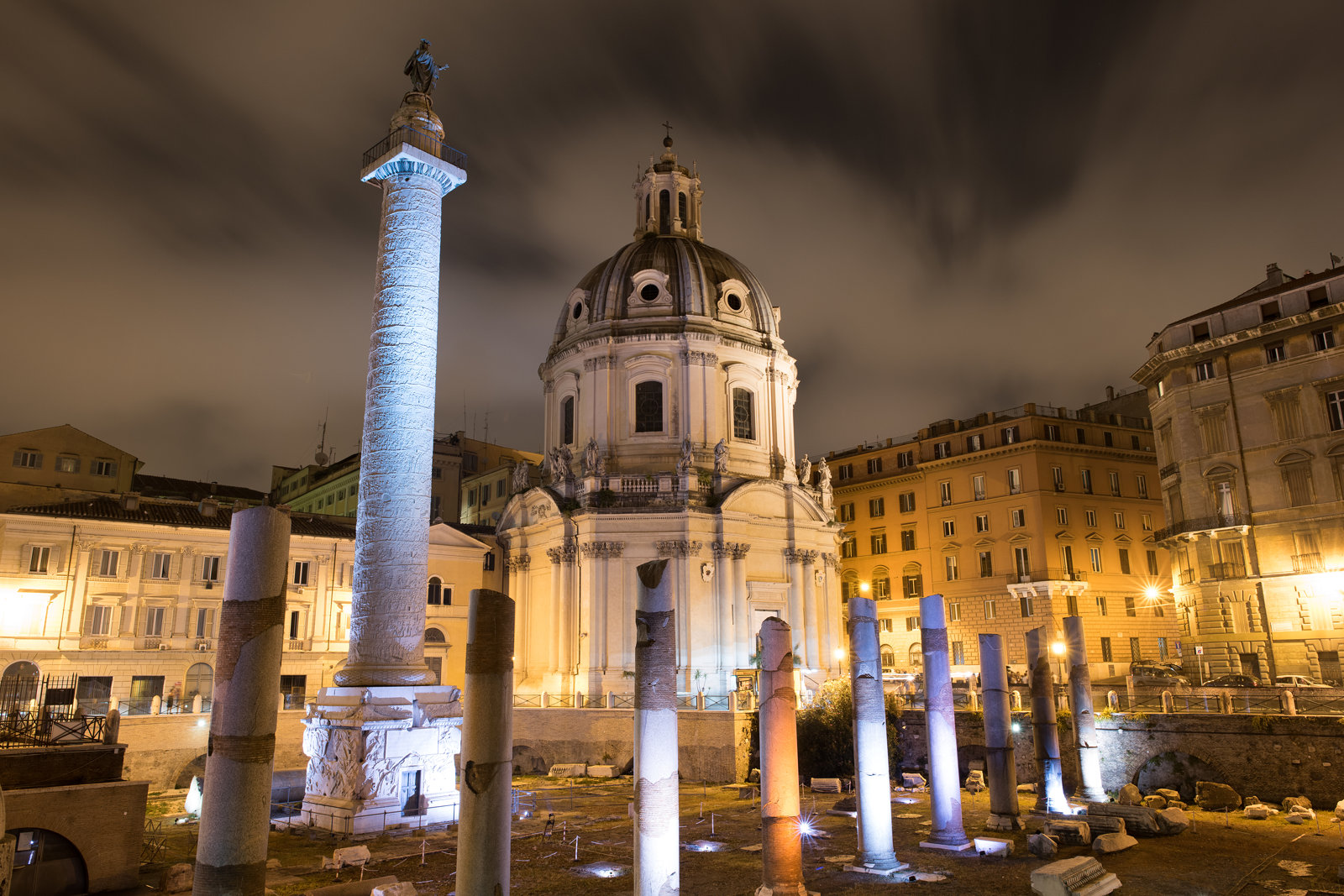 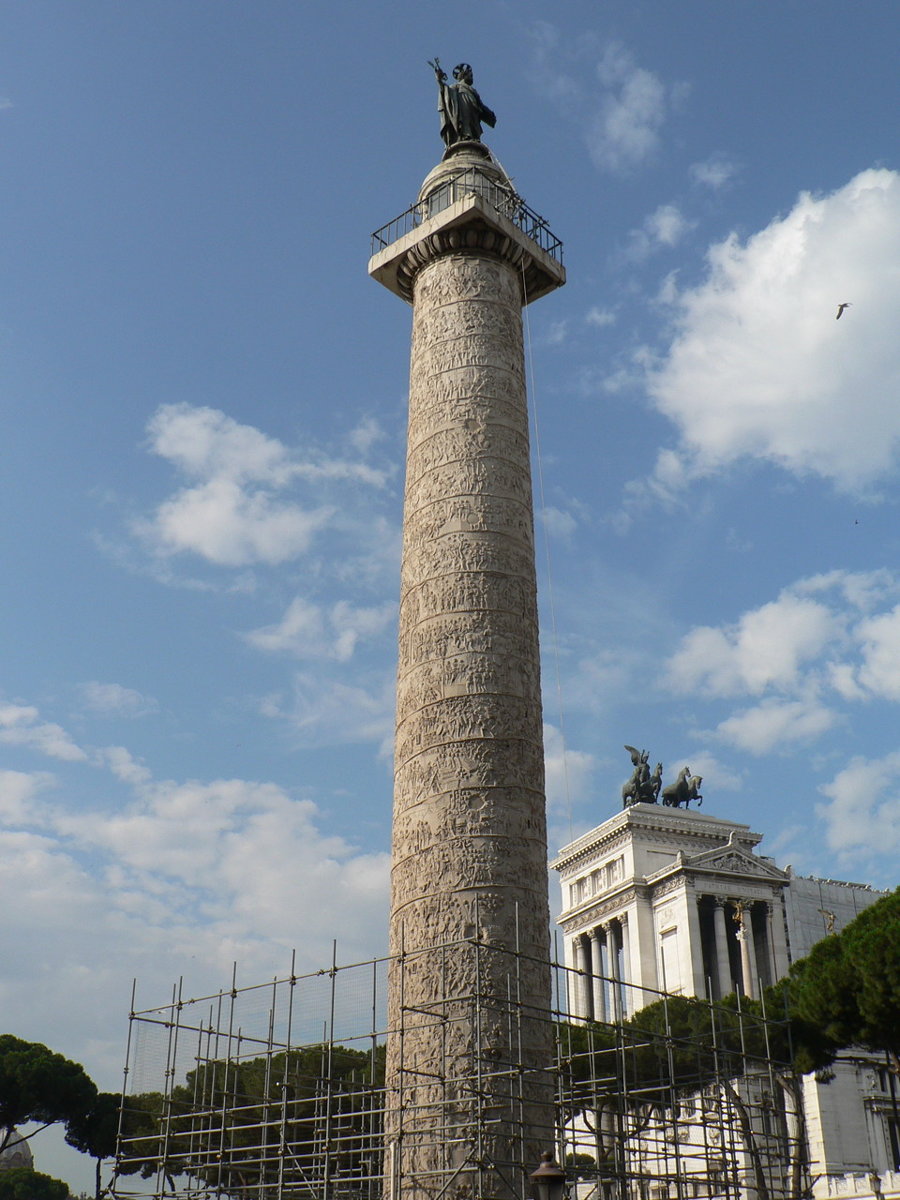 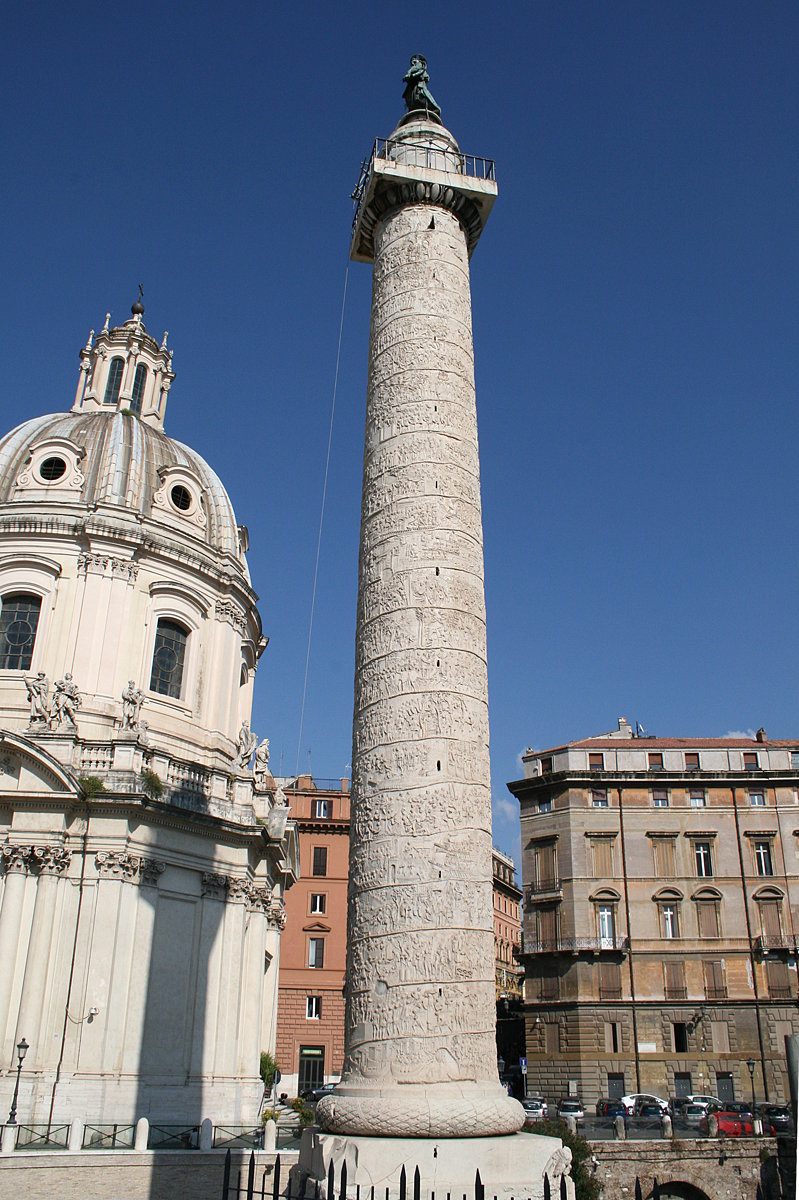 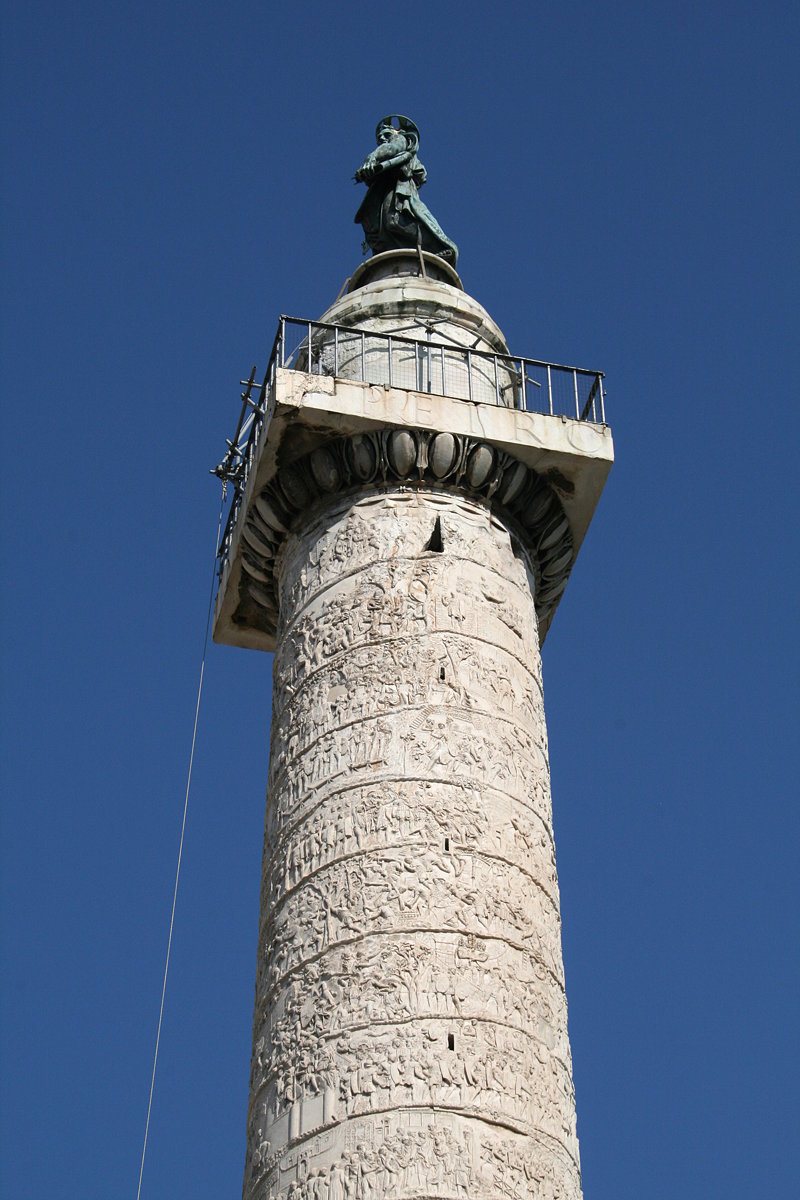 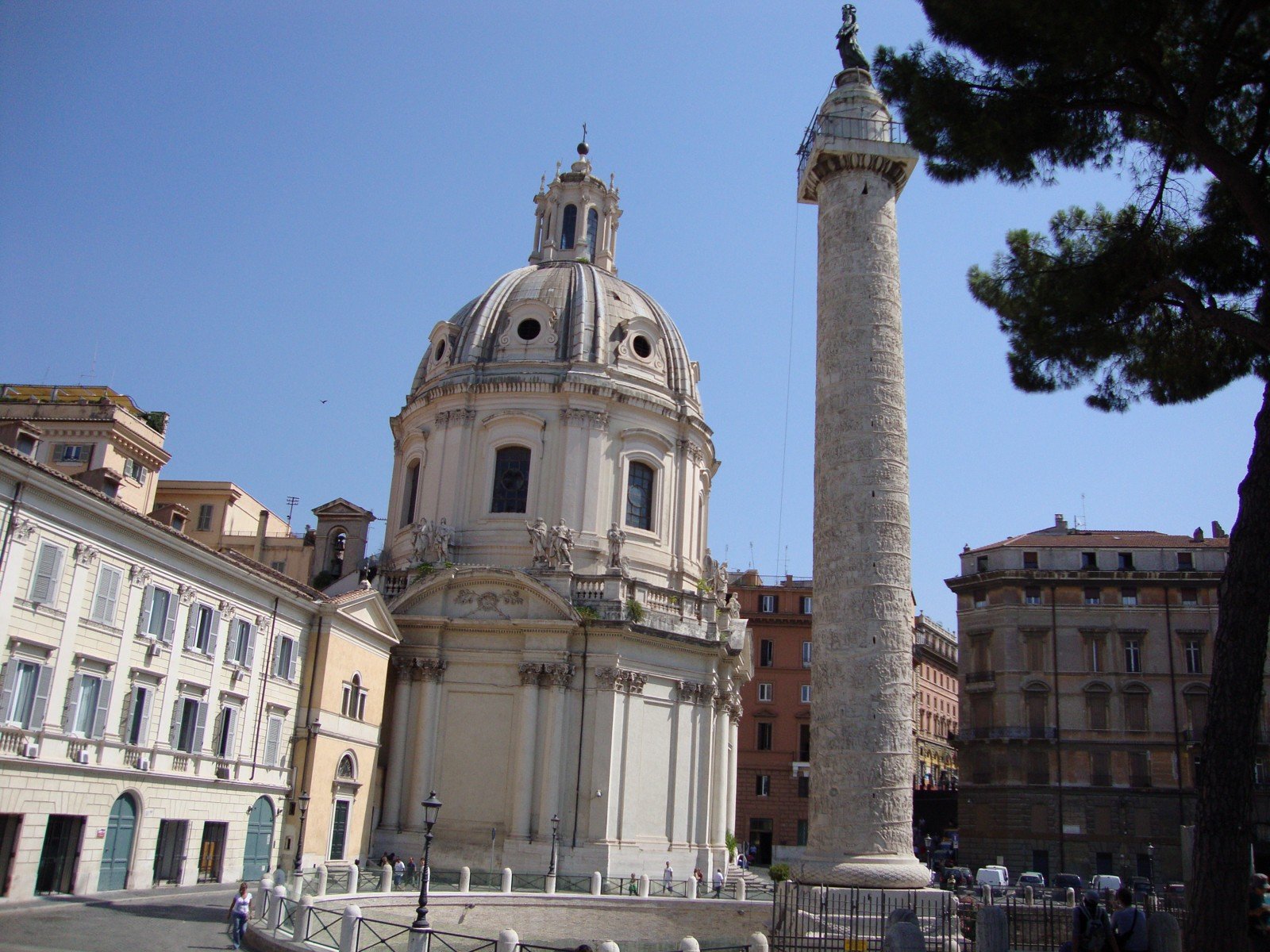 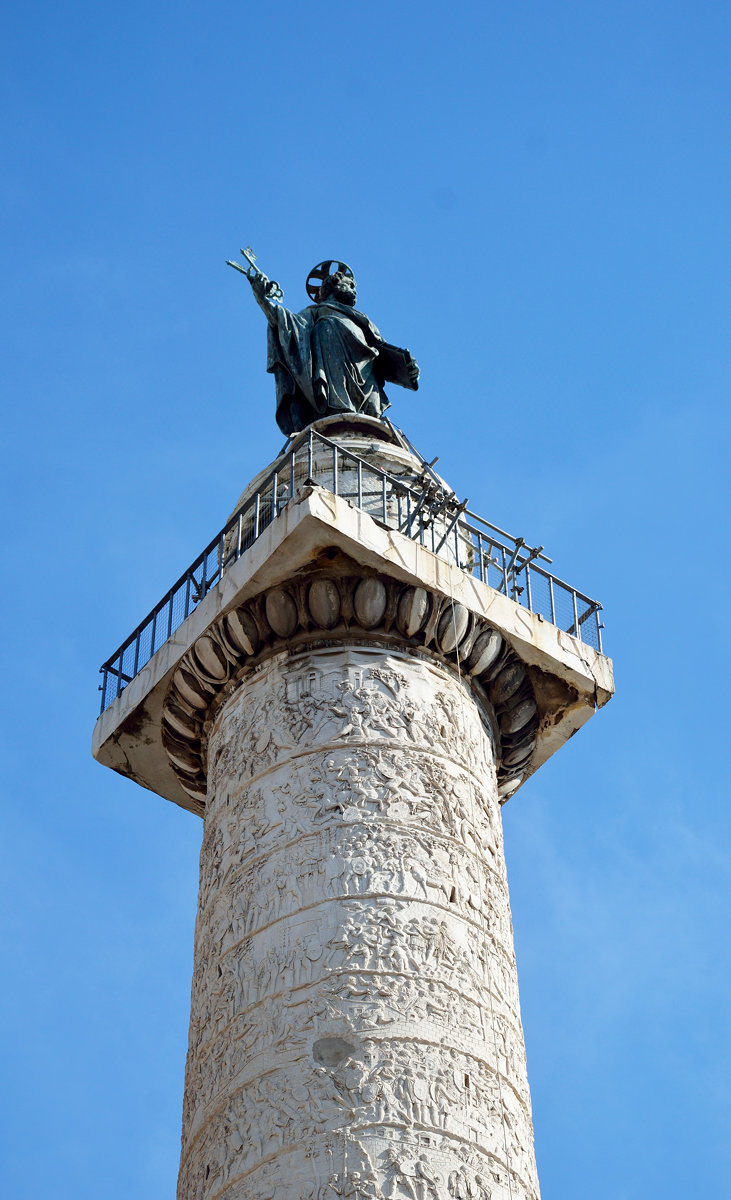 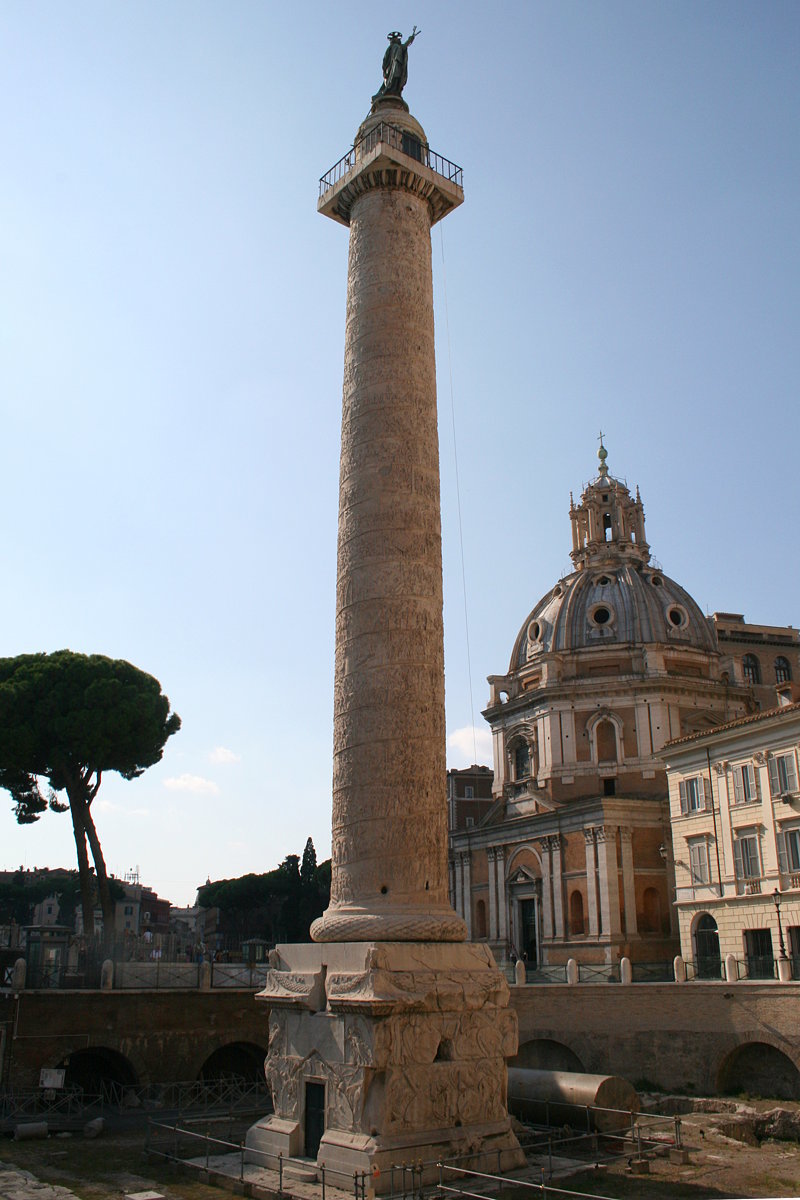 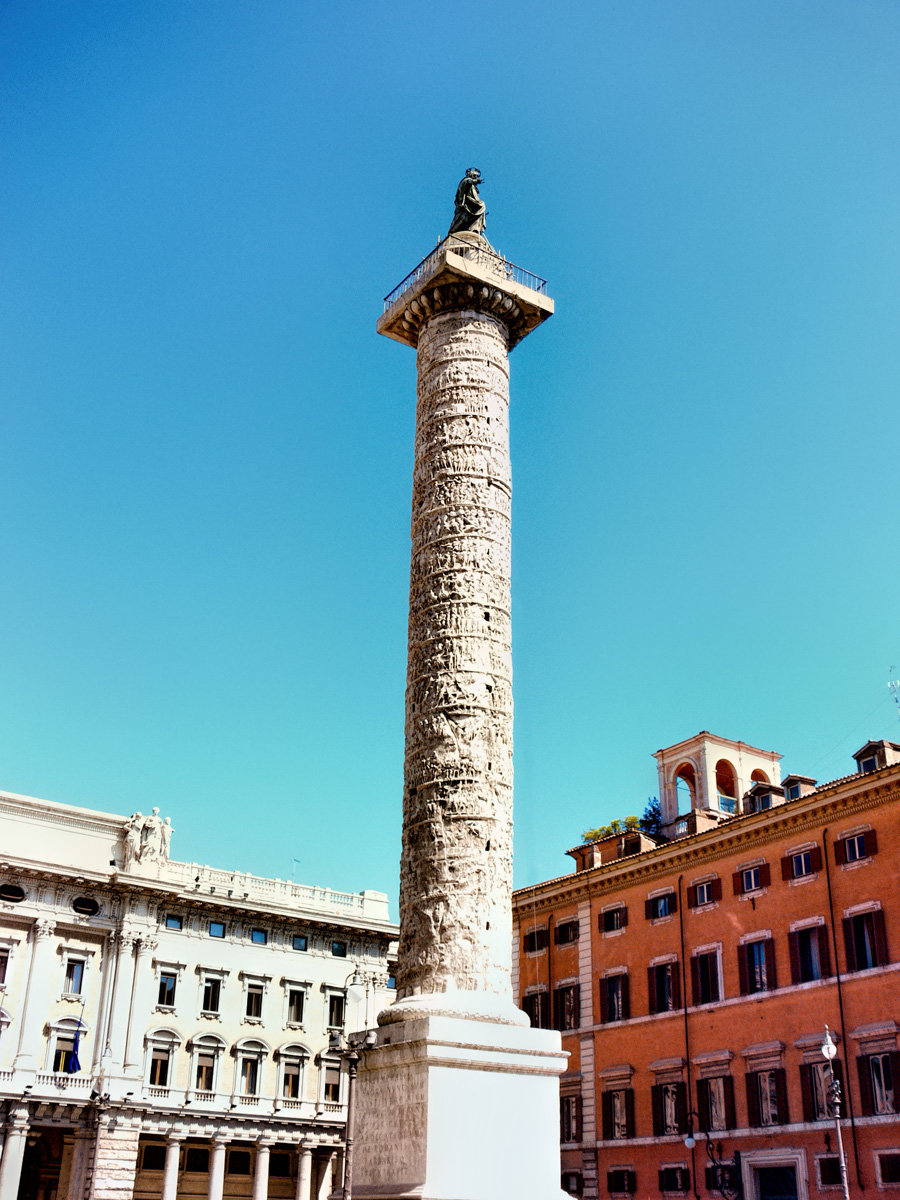