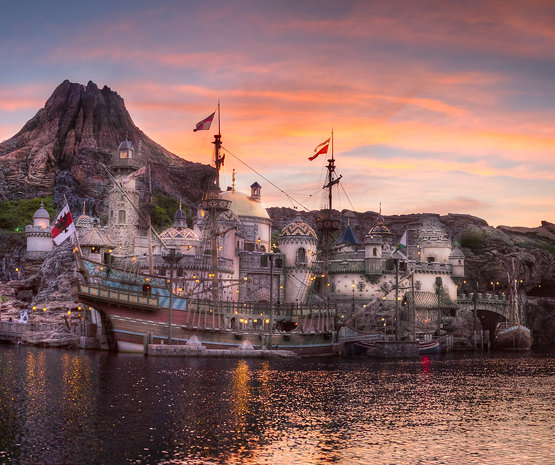 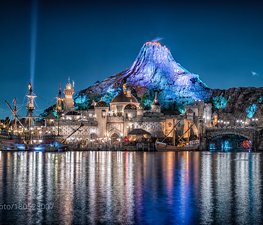 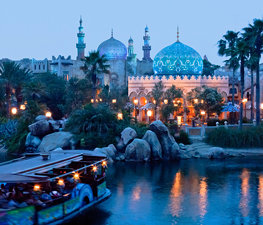 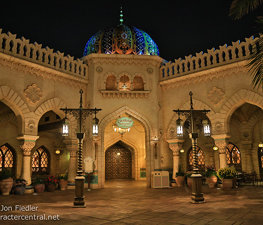 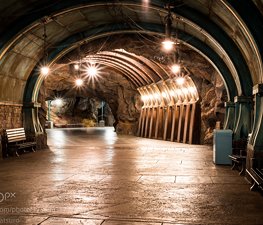 Tokyo DisneySea has an overall nautical exploration theme to it. The idea for the park can be traced to a proposal to build a second theme park in Southern California called "DisneySeas" in Long Beach, California [1]. However the idea was scrapped after the company endured financial trouble with the Euro Disney project. Later the idea was passed on to the Oriental Land Company to expand their resort. Unlike Tokyo Disneyland, the overall intention was to create a more adult-themed park, including faster, scarier rides and shows designed more for an older audience. By the time Tokyo DisneySea opened in 2001, its concepts and designs had been in development at Walt Disney Imagineering for well over 20 years.

Welcome one and all to a world where Imagination and Adventure set sail. Tokyo DisneySea is dedicated to the spirit of exploration that lives in each of us. Here we chart a course for Adventure, Romance, Discovery and Fun and journey to exotic and fanciful Ports of Call. May Tokyo DisneySea inspire the hearts and minds of all of us who share the water planet, Earth.
—Michael Eisner, September 4, 2001

Mediterranean Harbor is the entrance "port-of-call" and themed as an Italian port city, complete with Venetian gondolas that guests can board and ride. Littered throughout the port are various shops and restaurants. Mediterranean Harbor's layout differs from the entry "lands" of other Disney parks as it is a large "V" shape rather than a main street that leads to a hub (as found in Disneyland's Main Street, U.S.A. or Disney's Hollywood Studios' Hollywood Boulevard"). If followed to the right, the path leads to Mysterious Island, while if followed to the left, the path leads to the American Waterfront. Built into the architecture in this port is the Tokyo DisneySea Hotel MiraCosta. The hotel itself serves as a full-scale reproduction of the various buildings of Portofino and Venice's ports. The design choice of combining a real hotel within the themed park areas helps to further the illusion that (as either a park or hotel guest) you are in the actual city; since the hotel is a functioning building (rather than a 'set facade' -- the general standard in theme park designs) the hotel guests that may peek out from the hotel's rooms, balconies, and terraces serve in adding an almost surreal level of kinetic authenticity in passing for an authentic Italian villa for park visitors, while the hotel guest enjoys the harborside views and novelty of location. Additionally, the Hotel MiraCosta also serves as the southern berm (or border) of the park. Mediterranean Harbor also features attractions such as the Fortress Explorations which is a meticulously themed, large-scale interactive play area for guests that features exploration themed activities and attractions, The Legend of Mythica, a twenty-five minute show located on the harbor, and BraviSEAmo!, a nighttime spectacular also situated on the harbor that uses special barges, fountains, pyro effects, and fireworks.

Mysterious Island is a "port-of-call" within Mount Prometheus, the giant volcano that is the Park's centerpiece and most prominent feature. It relies heavily on the storytelling of Jules Verne and, specifically, the mythology of the volcano fortress mentioned several times in the books called "Vulcania." The smallest "port of call," it nevertheless holds two of the more popular attractions: "Journey to the Center of the Earth", a thrill ride, and "20,000 Leagues Under the Sea," a dark ride. While appearing to be a volcano on the water, Mysterious Island is not an island at all. It is instead built into the side of Mount Prometheus, which is part of the show building of the two attractions. The architecture in this port is of Victorian style, as the Jules Verne novels featured here all take place in this era.

Mermaid Lagoon is home to the characters of The Little Mermaid. The facade is made to look like the Palace of King Triton and features fanciful seashell-inspired architecture. This "port of call" is unique in that it is mostly indoors and recreates the feeling of being underwater. Most of the rides in this area are geared towards younger children. Attractions in this "port of call" include Flounder's Flying Fish Coaster; Scuttle's Scooters; Jumpin' Jellyfish; Blowfish Balloon Race; The Whirlpool; all of which are meticulously themed children's rides. Also in this area are Ariel's Playground which is a children's playground/extensive walkthrough attraction that recreates the various settings in the movie; and the Mermaid Lagoon Theater which is home to 'Under the Sea', a musical show featuring live actors, large-scale puppetry and Audio-Animatronics that recreate the story of The Little Mermaid. Visitors can also take photographs with Ariel at Ariel's Greeting Grotto.

This "port of call", like Mermaid Lagoon, is themed after a popular Disney animated film, this time Aladdin. It recreates an exotic Arabian harbor combined with an "enchanted world from 1001 Arabian Nights." There are three attractions in the land: Sindbad's Storybook Voyage, an indoor boat ride whose art direction seems to be (at first glance) a variation on "it's a small world" (complete with its own theme song, composed by Alan Menken), but actually (because of newly developed audio animatronics which, despite their miniature scale, have a full range of movement just like Pirates of the Caribbean's life-size figures) ends up even surpassing the technical accomplishment of the classic Pirates of the Caribbean; Caravan Carousel, a double-decker carousel that can hold over 190 passengers; and the Magic Lamp Theater, which houses a combined live-action/animatronic based magic show with a 3D movie featuring the Genie. A large eatery serving Middle-Eastern, Indian, and Japanese style curry, is at the center.

Located at the back of the park, The dominant structure in this "port of call" is a huge, ruined Central American Aztec pyramid which houses the E.M.V. attraction Indiana Jones Adventure: Temple of the Crystal Skull. Also located in the Lost River Delta is the DisneySea Steamer Line which transports guests back to Mediterranean Harbor, 'Mystic Rhythms' a live theatrical show that takes place in an abandoned hangar that has been reclaimed by the jungle, and Raging Spirits, a looping roller coaster situated in the ruins of an ancient ceremonial site.

Is Shanghai Disneyland worth a visit? The Theme Park Guy weighs in — Mouse Virals @ Flickr

This "port of call" is hailed as "the marina of the future". It is sometimes called the "Tomorrowland" of Tokyo DisneySea and is somewhat of a cross between the never-built Discovery Bay concept for Disneyland and Discoveryland in Disneyland Park (Paris). Home to the fictional 'Center for Weather Control', Port Discovery is home to three attractions: StormRider, a large-scale simulator ride; Aquatopia, a boat ride that uses LPS tracking (the 'trackless' technology also used in Tokyo Disneyland's Pooh's Hunny Hunt) to move and spin through a lagoon amid waterfalls and whirlpools, and the DisneySea Electric Railway, an overhead electric 'trolley' that transports you to and from the American Waterfront.

This "port of call" represents the northeastern seaboard of the United States in the early 20th century. It features two themed areas, an "Old Cape Cod" section, and a "New York Harbor" section with an elaborate backstory. This land is dominated by the large passenger ship, SS Columbia, which is usually the site for various shows and events. A restaurant is also located within the ship. Guests have the option of riding the area's "Big City Vehicles" which roam the streets of this area. It also features the "DisneySea Electric Railway" which takes passengers from The American Waterfront to nearby Port Discovery, This Port is the site for many of the park's live entertainment, among them are the shows staged at the Broadway-themed theater which currently plays the show "Big Band Beat". The port's most popular attraction is a Japanese version of Tower of Terror, an elaborately themed free-fall E-ticket ride with a unique storyline which is markedly different from other incarnations of the same ride. Recently, a new version of Turtle Talk with Crush has been placed in this land.

In 2002 Tokyo DisneySea won a Thea Award from the Themed Entertainment Association for the concept, design, and construction of the theme park. The award was presented at El Capitan Theater in Hollywood, CA.

The park's two symbols are the DisneySea AquaSphere - a water fountain with a large model of the earth - in the entrance plaza, and the gigantic volcano, Mount Prometheus, located in the center of the park. The volcano and Cinderella Castle in Tokyo Disneyland, the other park in the resort, are exactly the same height.

Travel + Leisure
DisneySea, the companion park to Tokyo Disneyland overlooking Tokyo Bay, took inspiration from aquatic myths, legends & the lore of the sea. Divided into 7 “ports of call," the park has water rides.

Michelle Connochie
Beautiful, clean park with great rides and shows. Needs a few more rides. Can be quite busy but if you download the TDR Dash app, you can see queue times and fast pass times for both parks.

Valerie Le
Loved it here! It was packed even on a rainy day. Tower of terror was so much fun, wave at the mirror screen; it's taking your picture. Try the blueberry churro and donald duck shrimp bun!

David Birkett
We had an amazing time here. The staff and people were so friendly. The Japanese run the venue very well and efficiently. There are queues of course but they move constantly and it's very clean

Jeaf Gilbert
Get show list on entry gate and arrange your schedule. Per show queuing takes about 30 mins to 1 hour, on holiday can take 4 hours. Go left to start from western buildings, go right is Arabics.

Toyosu PIT by Team Smile (チームスマイル・豊洲PIT) is a tourist attraction,

Disney's California Adventure Park is a theme park in Anaheim,

Disneyland is an American theme park in Anaheim, California, owned and 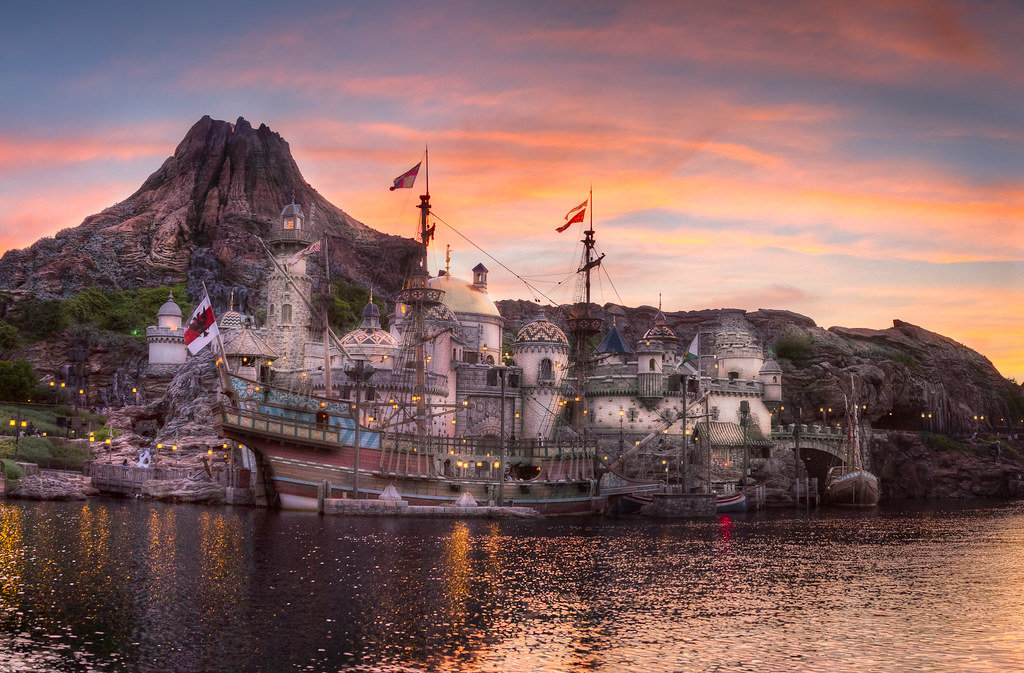 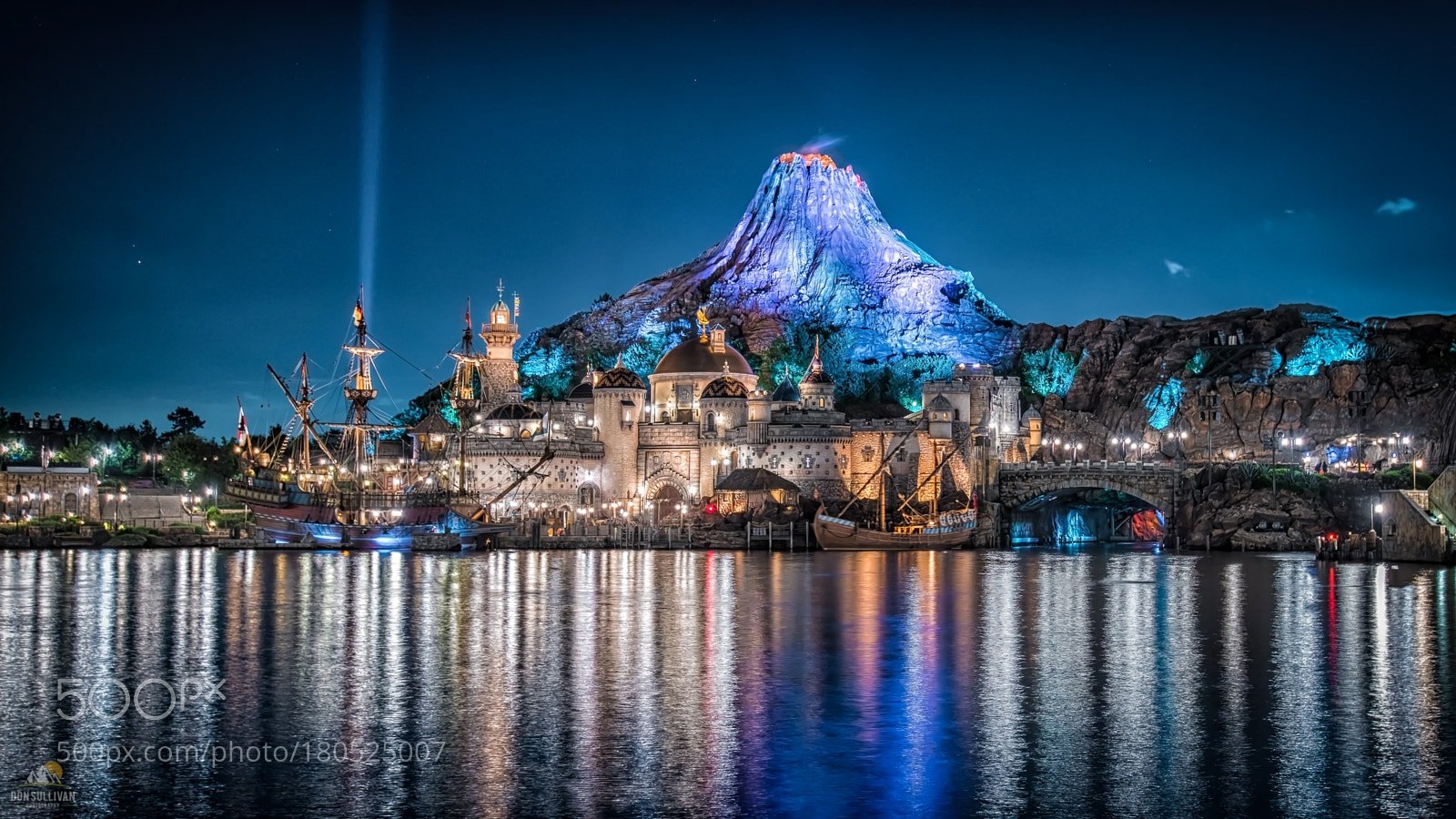 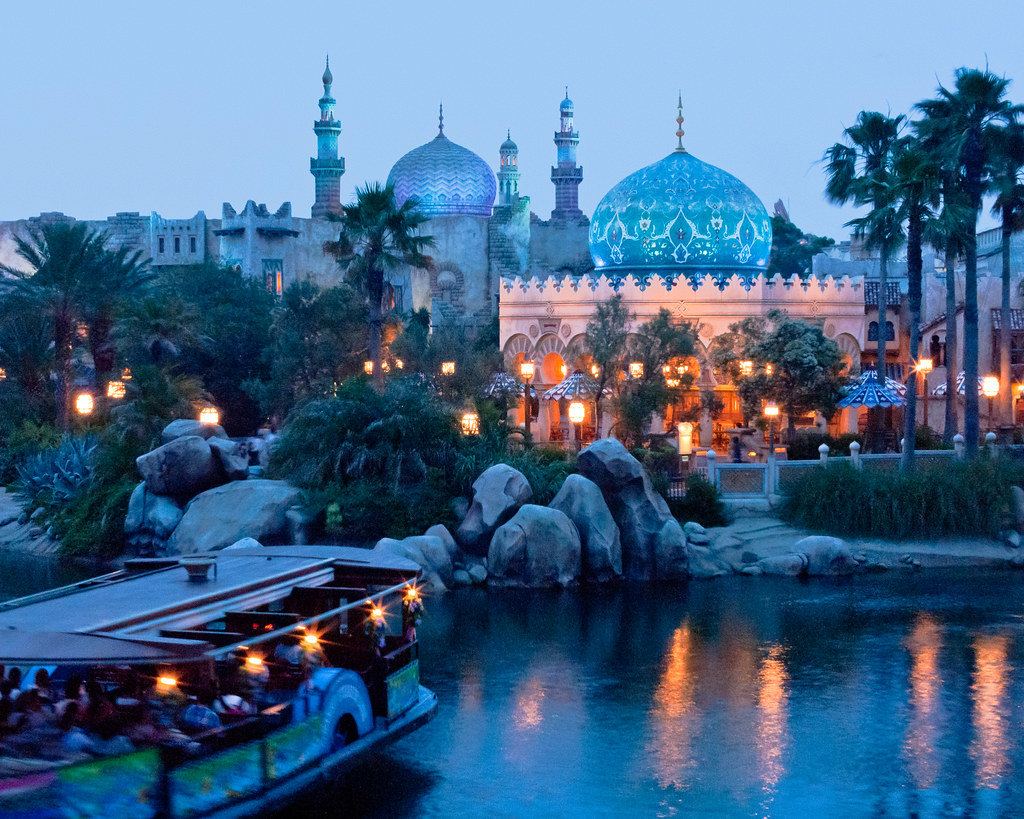 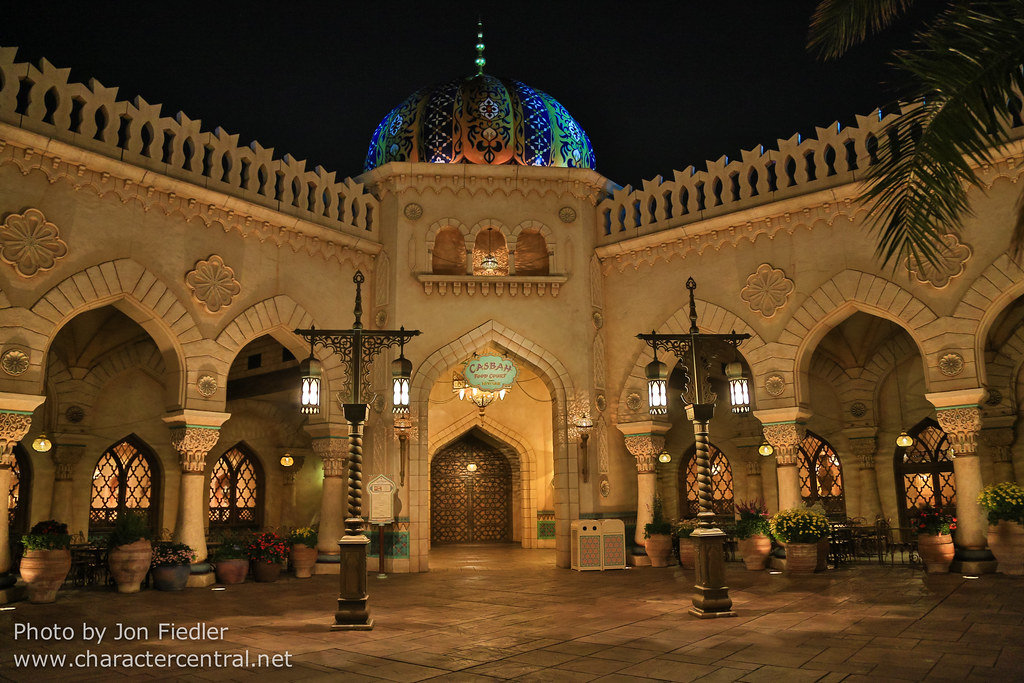 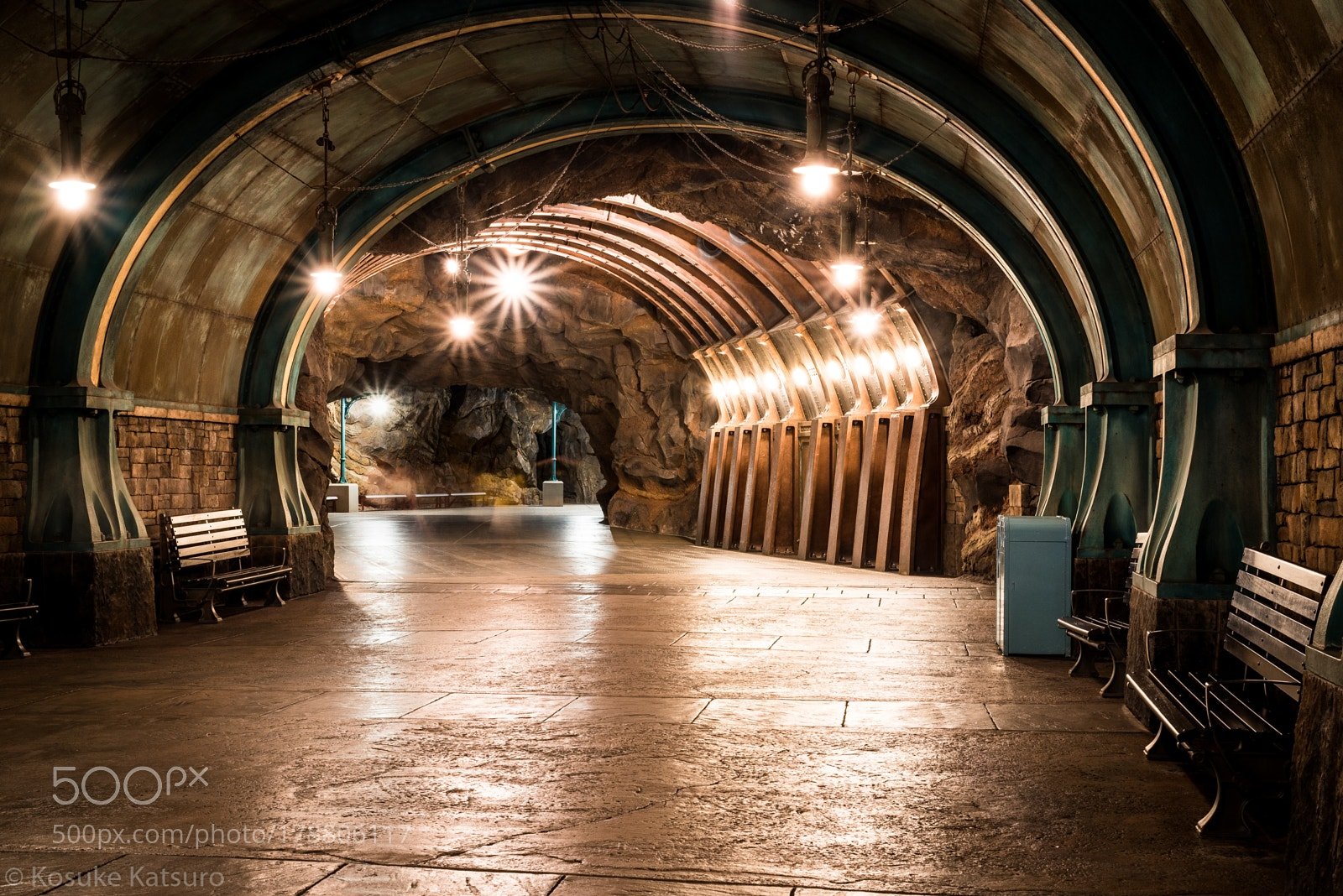 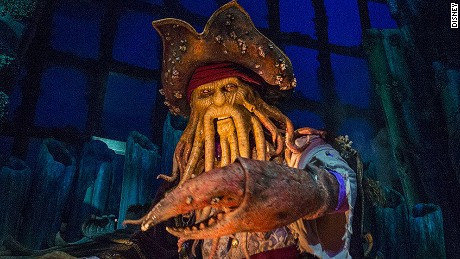 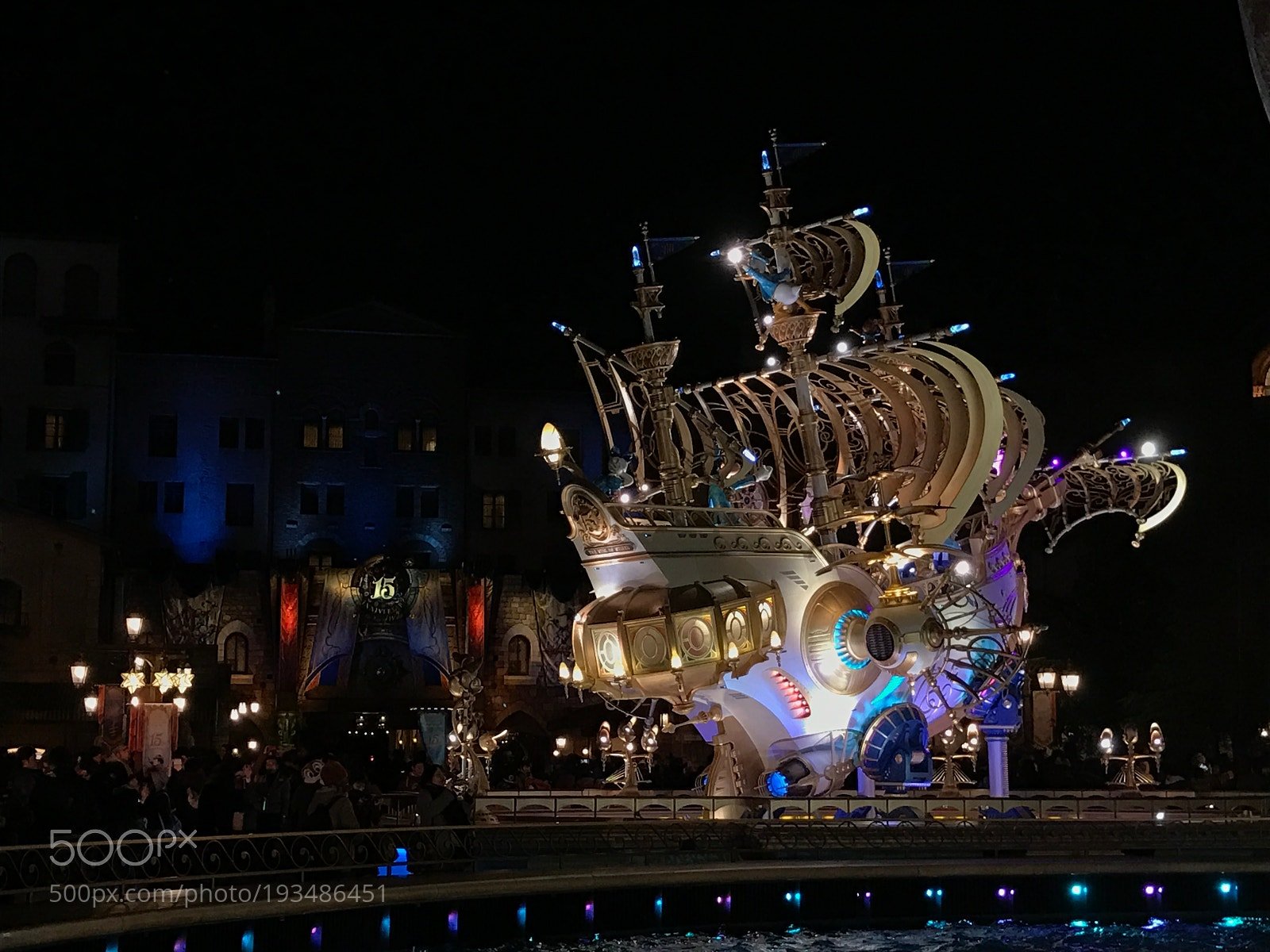 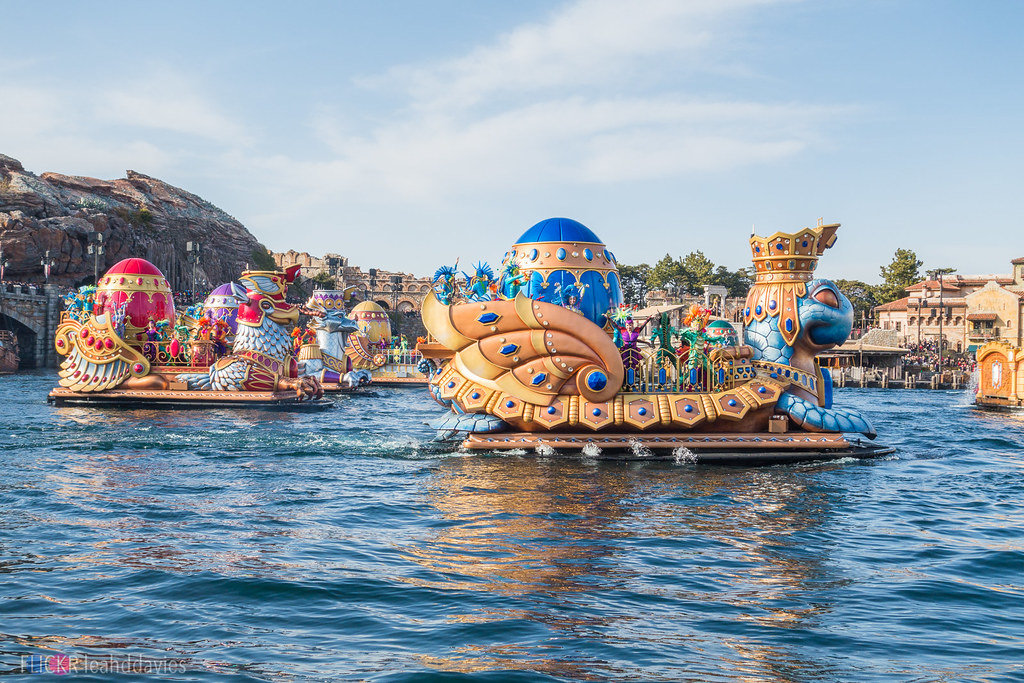 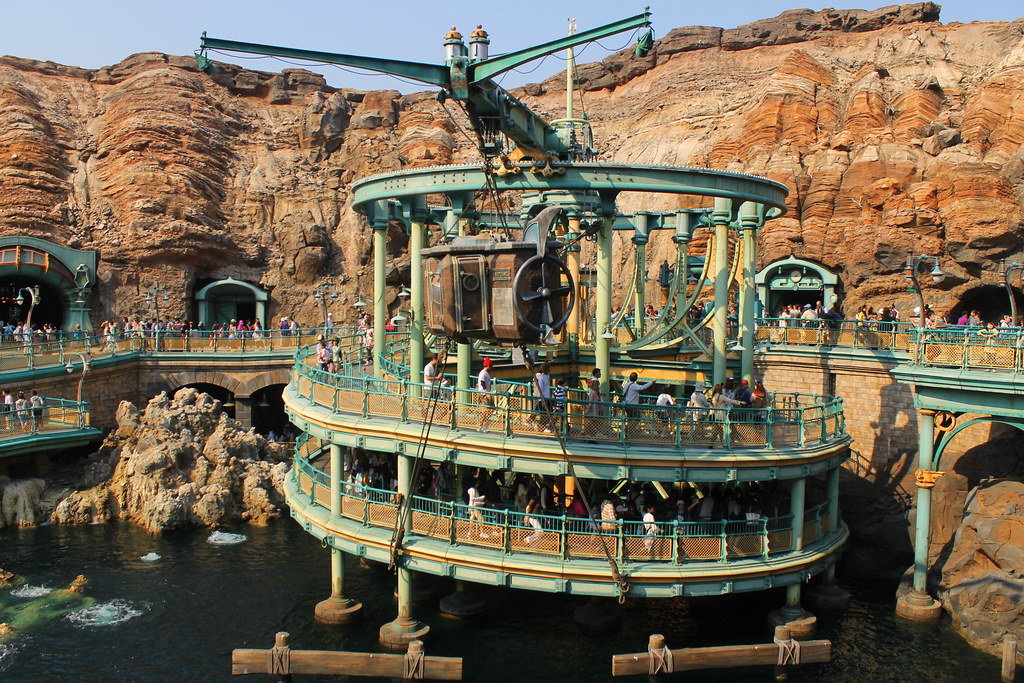 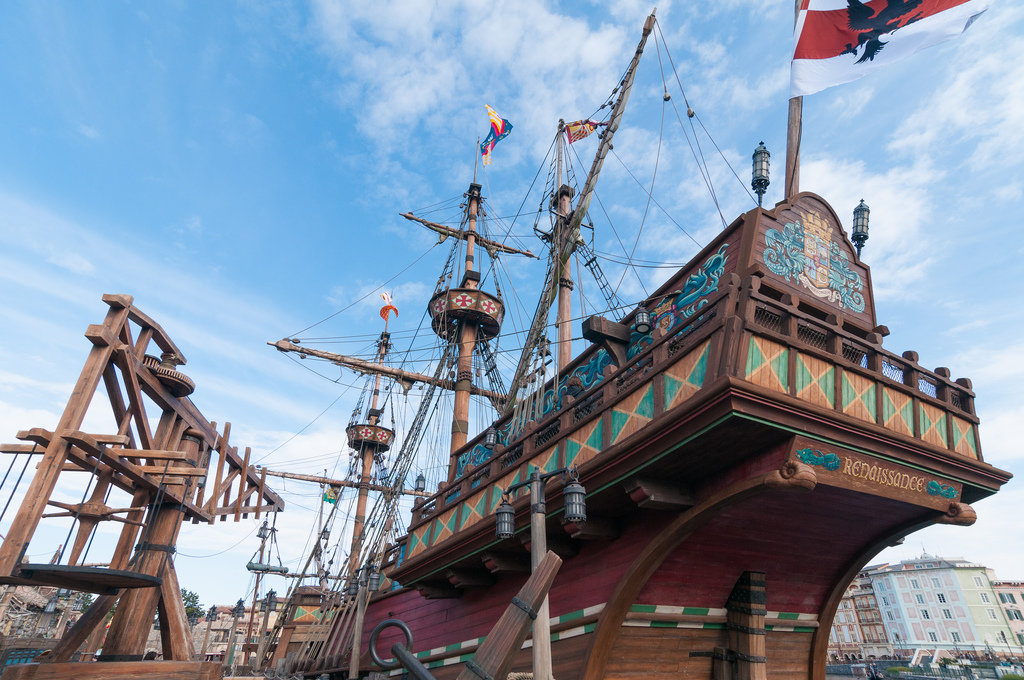 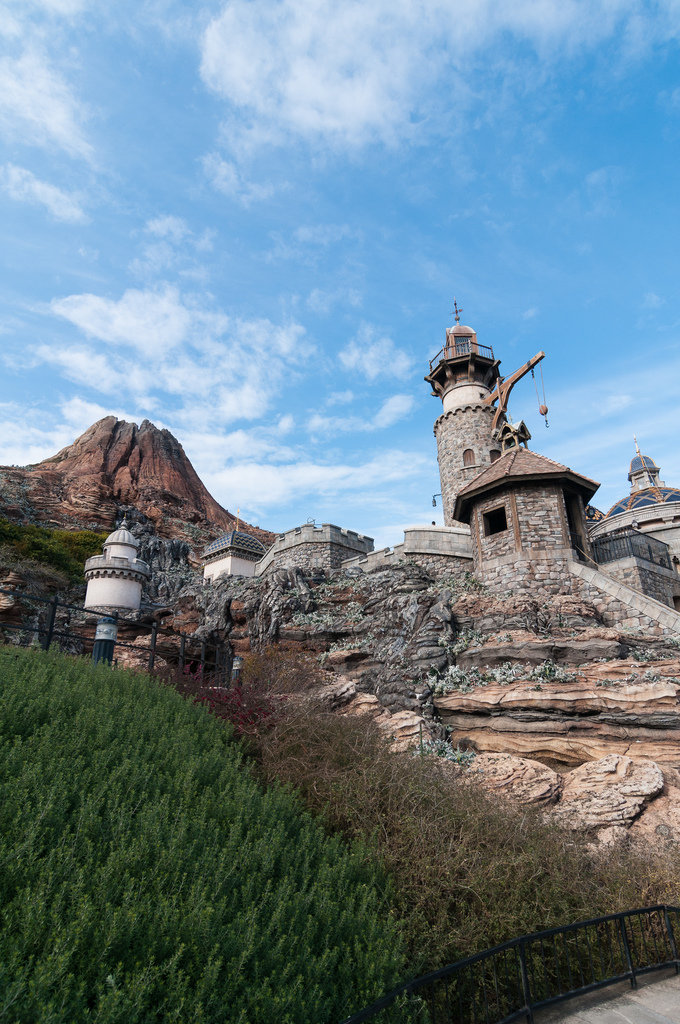 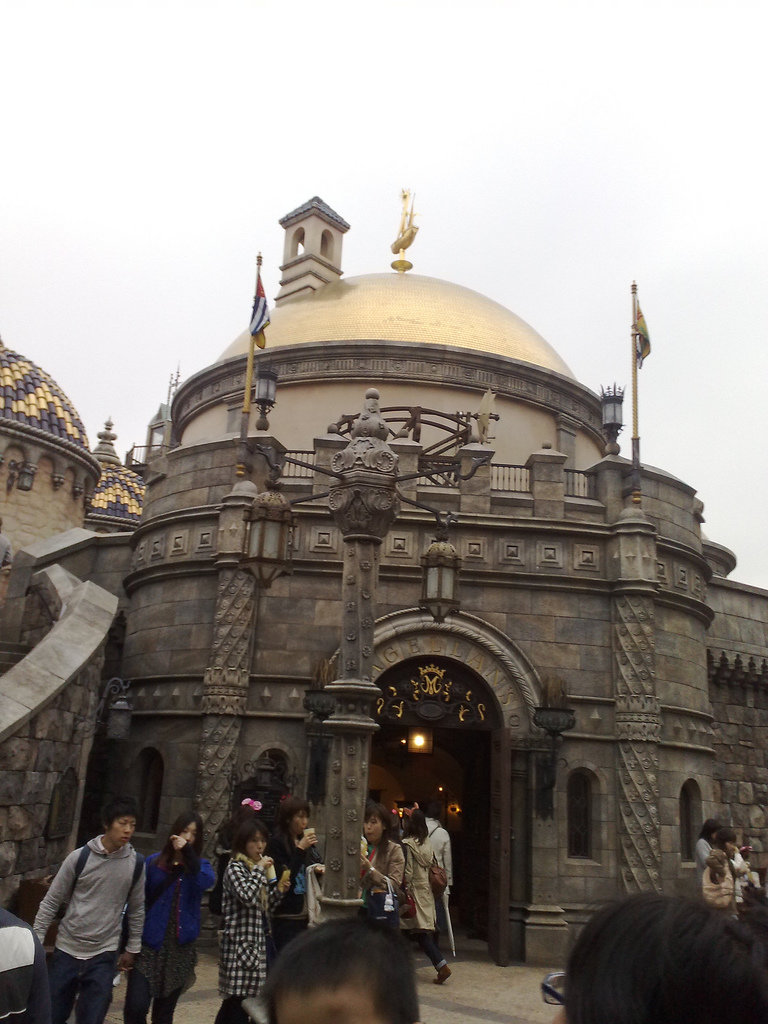 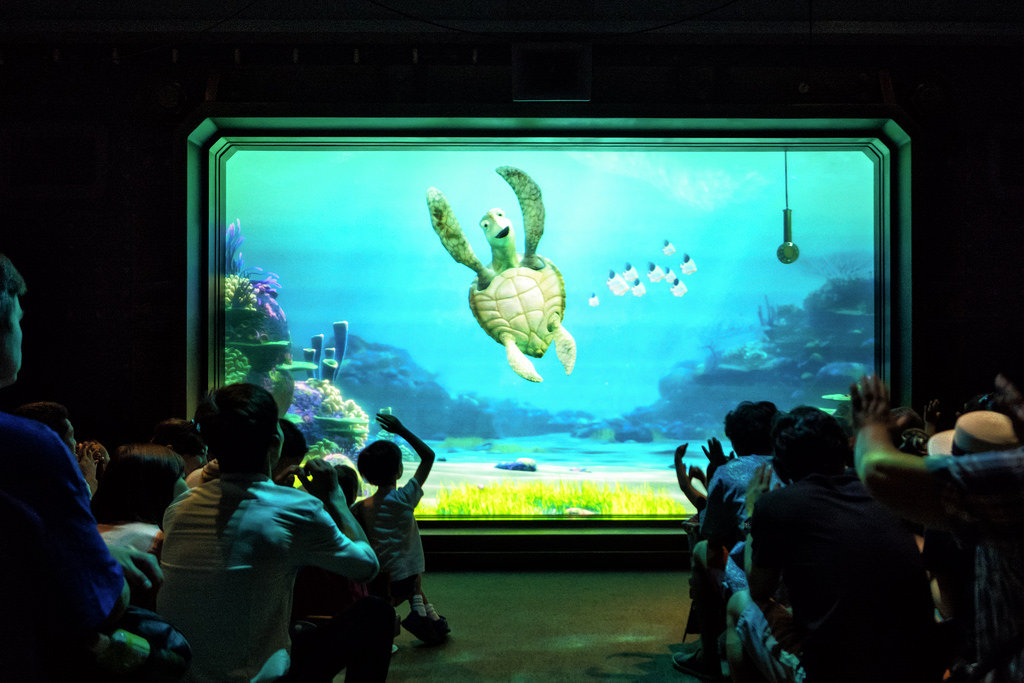 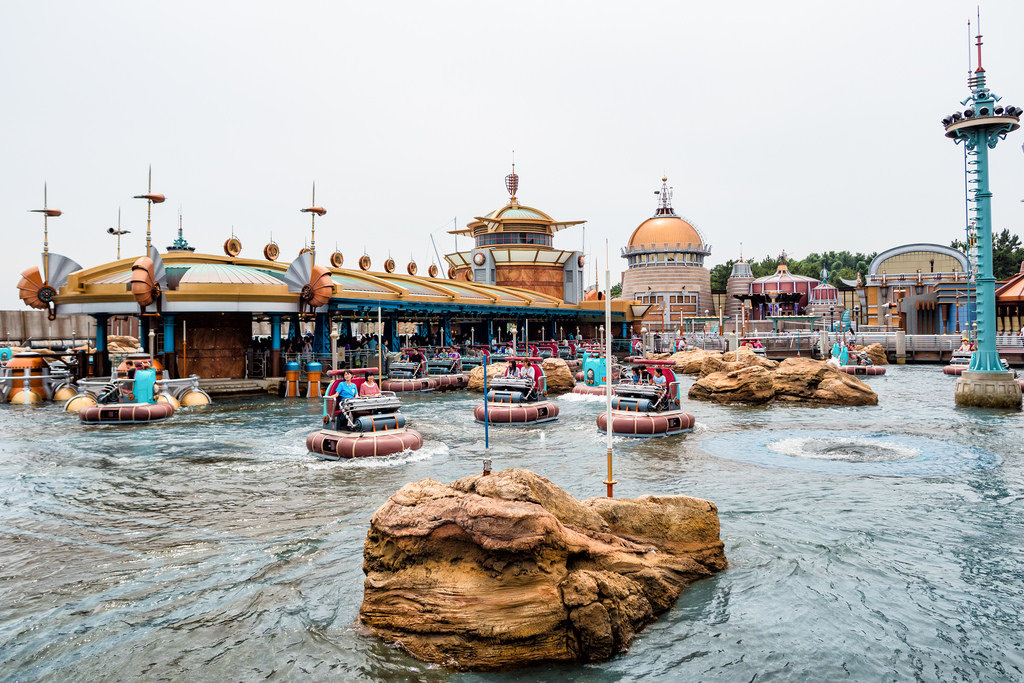 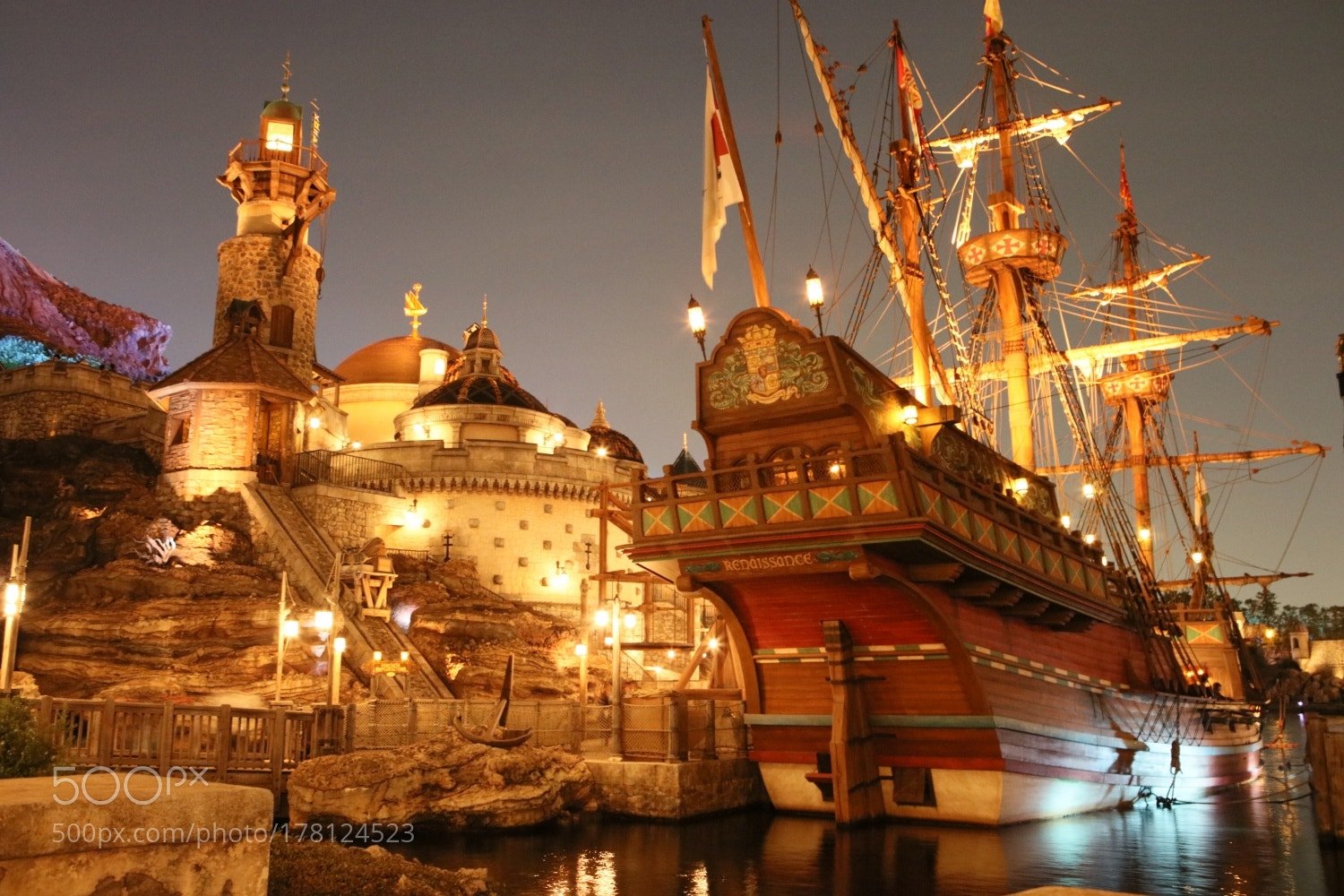 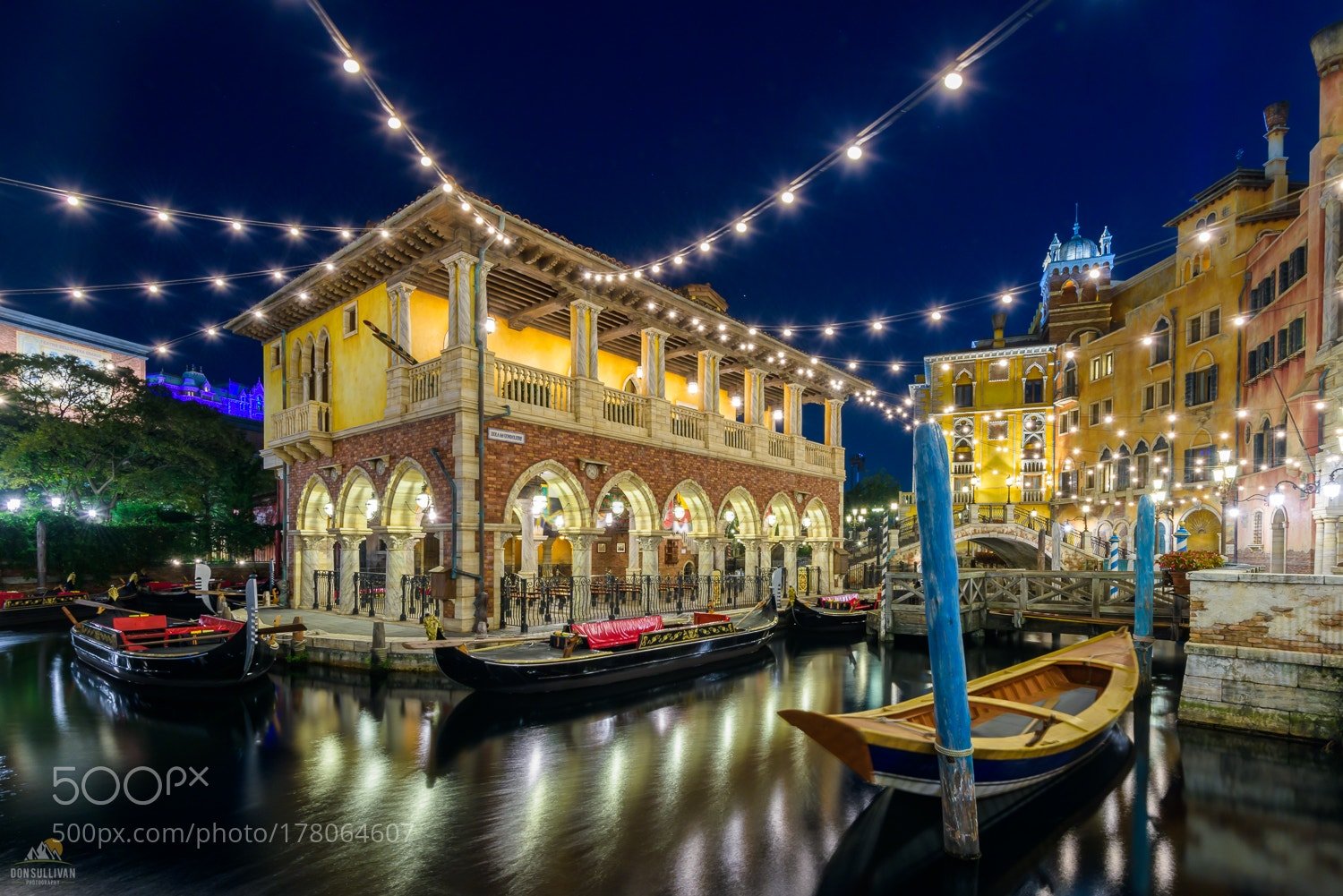 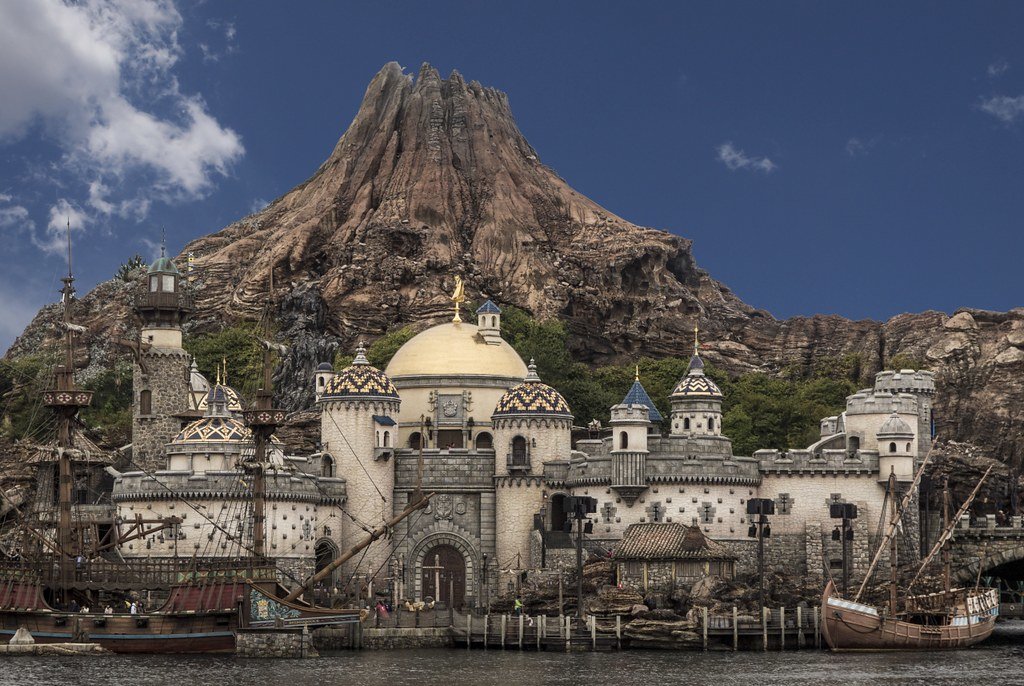 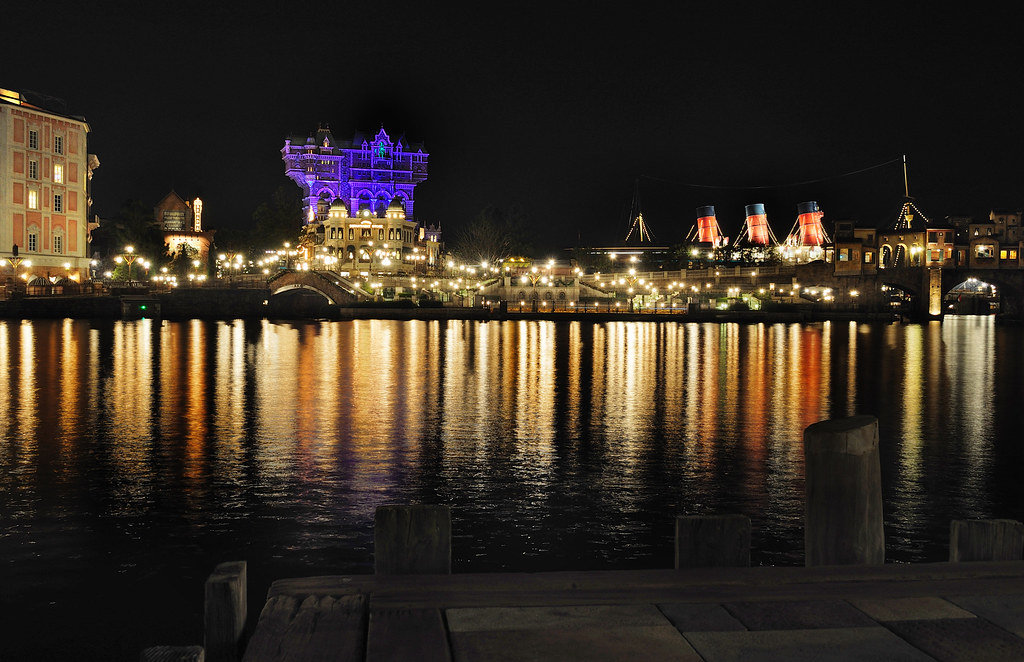 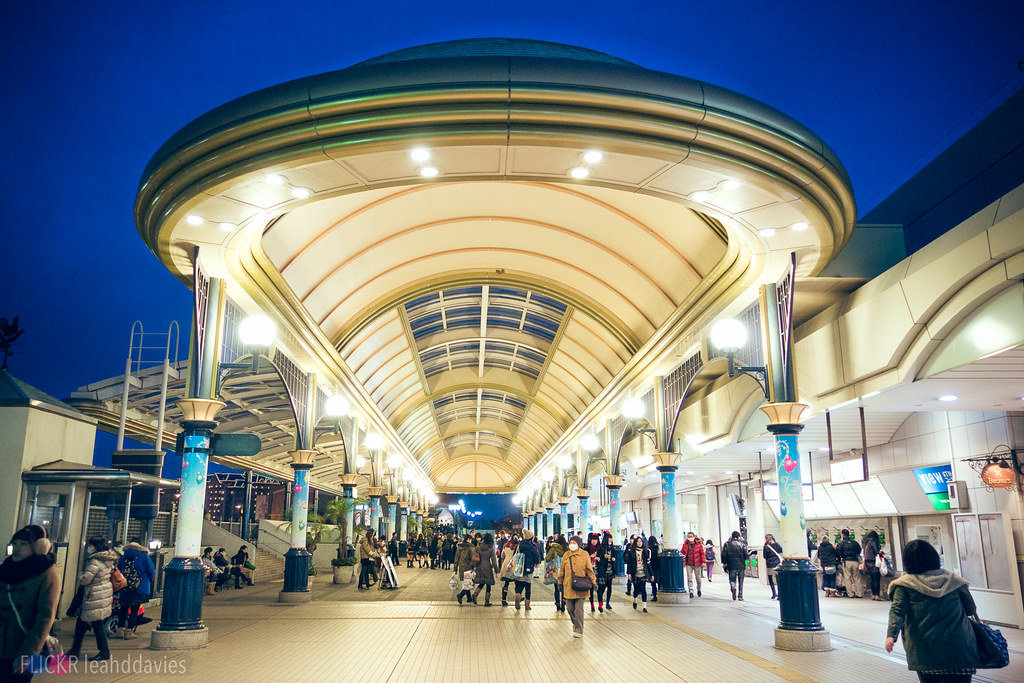