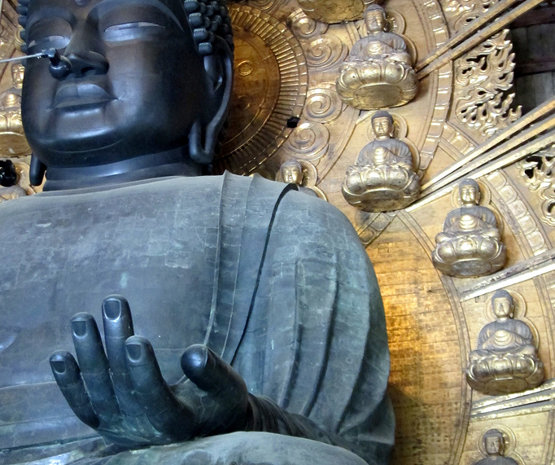 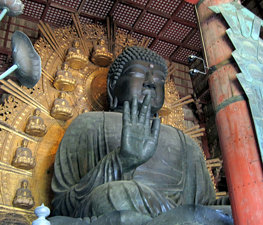 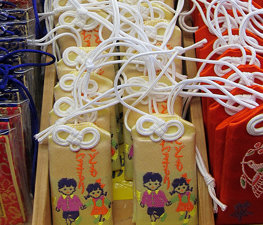 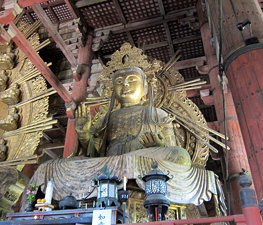 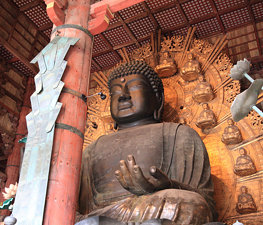 , is a Buddhist temple complex located in the city of Nara, Japan. Its Шаблон:Nihongo, houses the world's largest bronze statue of the Buddha Vairocana, known in Japanese simply as Шаблон:Nihongo3. The temple also serves as the Japanese headquarters of the Kegon school of Buddhism. The temple is a listed UNESCO World Heritage Site as "Historic Monuments of Ancient Nara", together with seven other sites including temples, shrines and places in the city of Nara. Sika deer, regarded as messengers of the gods in the Shinto religion, roam the grounds freely.

The beginning of building a temple where the Tōdai-ji complex sits today can be dated to 728, when Emperor Shōmu established Kinshōsen-ji (金鐘山寺) as an appeasement for Prince Motoi, his first son with his Fujiwara clan consort Kōmyōshi. Prince Motoi died a year after his birth.

During the Tenpyō era, Japan suffered from a series of disasters and epidemics. It was after experiencing these problems that Emperor Shōmu issued an edict in 741 to promote the construction of provincial temples throughout the nation. Tōdai-ji (still Kinshōsen-ji at the time) was appointed as the Provincial temple of Yamato Province and the head of all the provincial temples. With the alleged coup d'état by Nagaya in 729, an outbreak of smallpox around 735–737, worsened by consecutive years of poor crops, then followed by a rebellion led by Fujiwara no Hirotsugu in 740, the country was in a chaotic position. Emperor Shōmu had been forced to move the capital four times, indicating the level of instability during this period.

Under the Ritsuryō system of government in the Nara Period, Buddhism was heavily regulated by the state through the Шаблон:Nihongo. During this time, Tōdai-ji served as the central administrative temple for the provincial temples for the six Buddhist schools in Japan at the time: the Hossō, Kegon, Jōjitsu, Sanron, Ritsu and Kusha. Letters dating from this time also show that all six Buddhist schools had offices at Tōdai-ji, complete with administrators, shrines and their own library.

Japanese Buddhism during this time still maintained the lineage of the Vinaya and all officially licensed monks had to take their ordination under the Vinaya at Tōdai-ji. In 754, ordination was given by Ganjin, who arrived in Japan after overcoming hardships over 12 years and six attempts of crossing the sea from China, to Empress Kōken, former Emperor Shōmu and others. Later Buddhist monks, including Kūkai and Saichō took their ordination here as well. During Kūkai's administration of the Sōgō, additional ordination ceremonies were added to Tōdai-ji, including ordination of the Bodhisattva Precepts from the Brahma Net Sutra and the esoteric Precepts, or Samaya, from Kukai's own newly established Shingon school of Buddhism. Additionally, Kūkai added an Abhiseka Hall for the use of initiating monks of the six Nara schools into the esoteric teachings. by 829.

During its height of power, Tōdai-ji's famous Shuni-e ceremony was established by the monk Jitchū, and continues to this day.

As the center of power in Japanese Buddhism shifted away from Nara to Mount Hiei and the Tendai sect, and later when the capital of Japan moved to Kamakura, Tōdai-ji's role in maintaining authority declined as well. In later generations, the Vinaya lineage also died out, despite repeated attempts to revive it, thus no more ordination ceremonies take place at Tōdai-ji.

In 743, Emperor Shōmu issued a law in which he stated that the people should become directly involved with the establishment of new Buddha temples throughout Japan. His personal belief was that such piety would inspire Buddha to protect his country from further disaster. Gyōki, with his pupils, traveled the provinces asking for donations. According to records kept by Tōdai-ji, more than 2,600,000 people in total helped construct the Great Buddha and its Hall. The 16 m (52 ft) high statue was built through eight castings over three years, the head and neck being cast together as a separate element. The making of the statue was started first in Shigaraki. After enduring multiple fires and earthquakes, the construction was eventually resumed in Nara in 745, and the Buddha was finally completed in 751. A year later, in 752, the eye-opening ceremony was held with an attendance of 10,000 people to celebrate the completion of the Buddha. The Indian priest Bodhisena performed the eye-opening for Emperor Shōmu. The project nearly bankrupted Japan's economy, consuming most of the available bronze of the time.

The original complex also contained two 100 m pagodas, perhaps second only to the pyramids of Egypt in height at the time. These were destroyed by an earthquake. The Shōsōin was its storehouse, and now contains many artifacts from the Tenpyo period of Japanese history.

The Great Buddha Hall (Daibutsuden) has been rebuilt twice after fire. The current building was finished in 1709, and although immense—57 m long and 50 m wide—it is actually 30% smaller than its predecessor. Until 1998, it was the world's largest wooden building. It has been surpassed by modern structures, such as the Japanese baseball stadium 'Odate Jukai Dome', amongst others. The Great Buddha statue has been recast several times for various reasons, including earthquake damage. The current hands of the statue were made in the Momoyama Period (1568–1615), and the head was made in the Edo period (1615–1867).

The existing Nandaimon (Great South Gate) is a reconstruction of end-12th century based on Song Dynasty style. The dancing figures of the Nio, the two 28-foot-tall guardians at the Nandaimon, were built at around the same time by Unkei, Kaikei and their workshop members. The Nio are an A-un pair known as Ungyo, which by tradition has a facial expression with a closed mouth, and Agyo, which has an open mouthed expression. The two figures were closely evaluated and extensively restored by a team of art conservators between 1988 and 1993. Until then, these sculptures had never before been moved from the niches in which they were originally installed. This complex preservation project, costing $4.7 million, involved a restoration team of 15 experts from the National Treasure Repairing Institute in Kyoto.

Dimensions of the Daibutsu

The temple gives the following dimensions for the statue:

Various buildings of the Tōdai-ji have been incorporated within the overall aesthetic intention of the gardens' design. Adjacent villas are today considered part of Tōdai-ji.

Some of these structures are now open to the public. The time spent visiting one or more of these less well-known buildings can only enhance an appreciation of the temple complex itself.

Over the centuries, the buildings and gardens have evolved together as to become an integral part of a unique, organic and living temple community.

The Tōdai-ji Culture Center opened on October 10, 2011, comprising a museum to exhibit the many sculptures and other treasures enshrined in the various temple halls, along with a library and research centre, storage facility, and auditorium.

The architectural master-works are classified as:

Tōdai-ji has been used as a location in several Japanese films and television dramas. It was also used in the 1950s John Wayne movie The Barbarian and the Geisha when Nandaimon, the Great South Gate, doubled as a city's gates.

It also appears in Microsoft's game Age of Empires II.

On May 20, 1994, the international music festival The Great Music Experience was held at Tōdai-ji, supported by the UNESCO.

Sarah Brightman in Concert with Orchestra

On November 3, 2010, English soprano Sarah Brightman was invited to sing at the Tōdai-ji in her concert tour called Sarah Brightman in Concert with Orchestra. The concert was recorded and later broadcast in Japan by the Tokyo Broadcasting System.Шаблон:Citation needed

Artyom Fedosov
Was built in 752 as the main temple of the Japanese Buddhism. The main hall became about 30% smaller after reconstruction in the 17th century, but still be the biggest wooden building in the world.

Nick Tan
Marvel at the sight of the largest wooden building in the world, but be prepared for the deluge of people. Never show paper to the deer as they will eat it. Watch out for deer poop along the way!

Aldona
The size of the Daibutsu blew my mind. BLEW. MY. MIND. Lots of other interesting statues inside. You probably know this but if you are to choose one spot in Nara to visit, this is it.

is a Japanese garden located in Nara, the old capital of Japan near

Nara Park (奈良公園, Nara Kōen) is a public park located in the city of

The Шаблон:Nihongo, also known as the Kasuga Taisha Garden, is a botan

is a Shinto shrine in the city of Nara, in Nara Prefecture, Japan.

Angkor Wat (or Angkor Vat) (ភាសាខ្មែរ. អង្គរវត្ត), is a

, officially named Шаблон:Nihongo, is a Zen Buddhist temple in Kyoto

is a Zen temple located in northwest Kyoto, Japan. It belongs to the 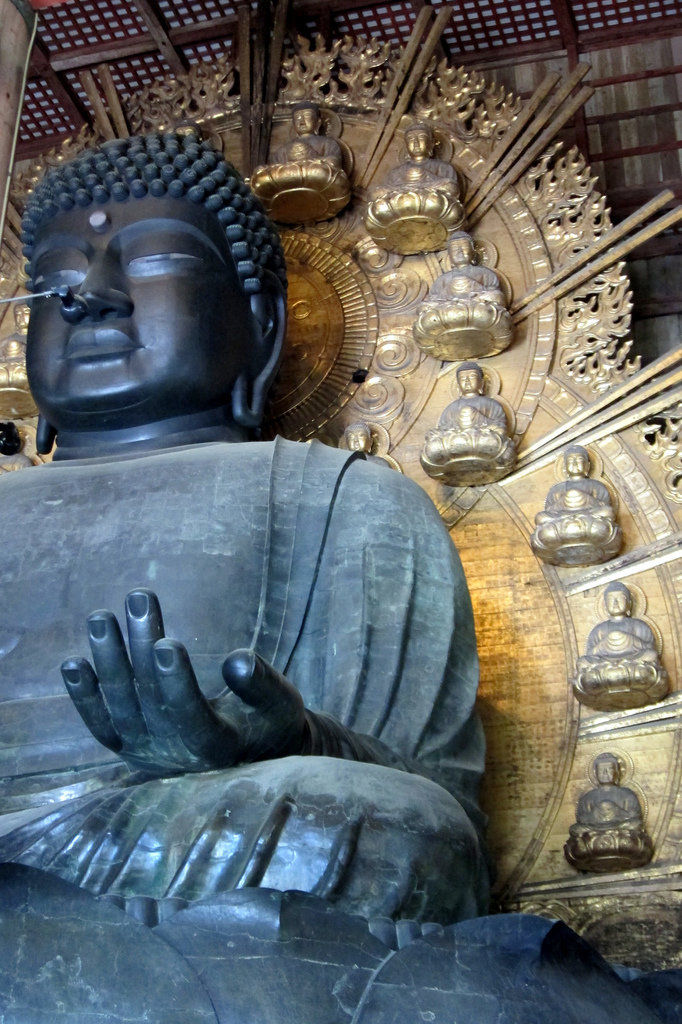 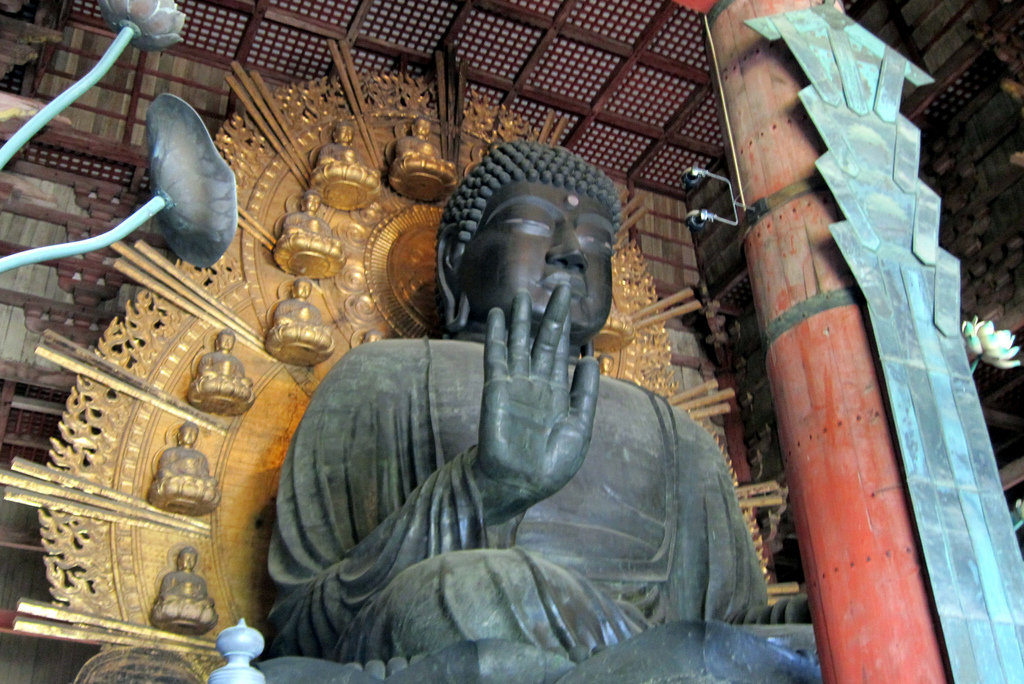 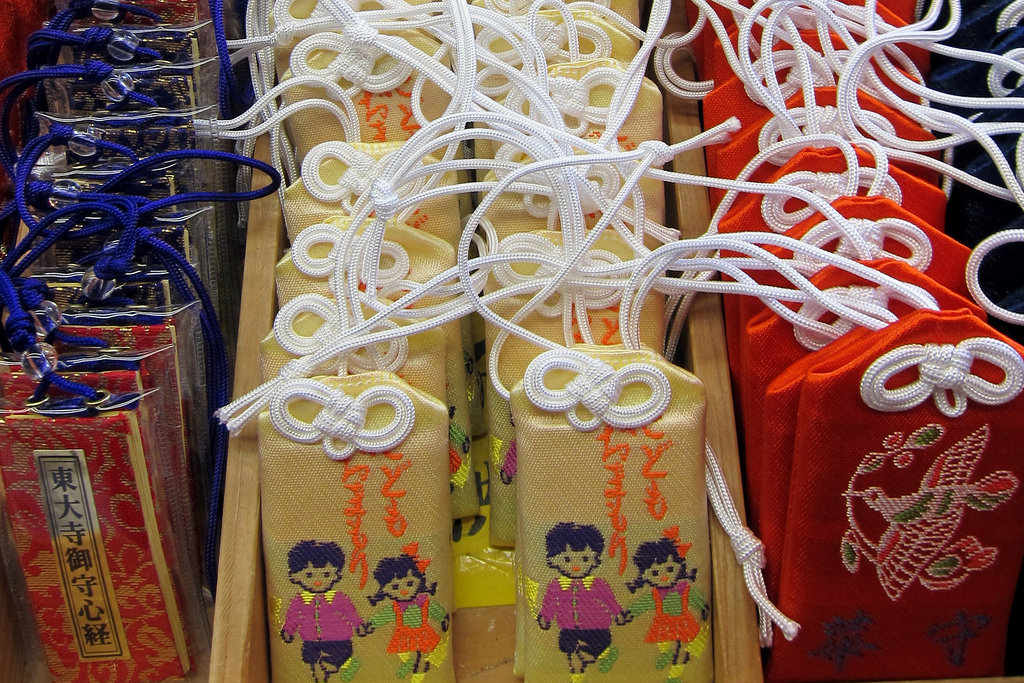 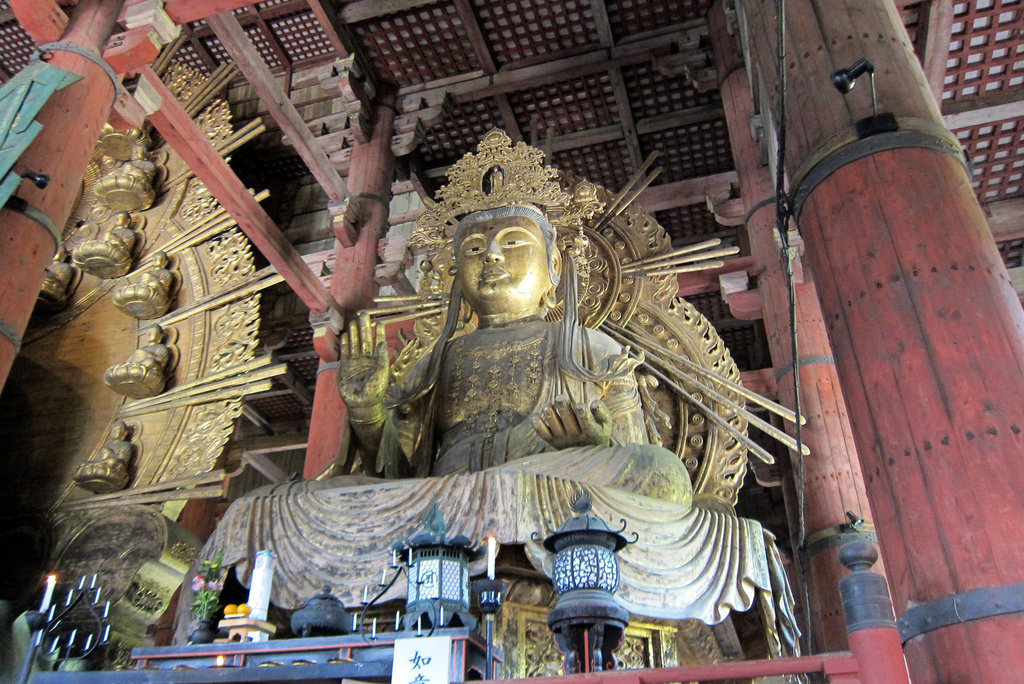 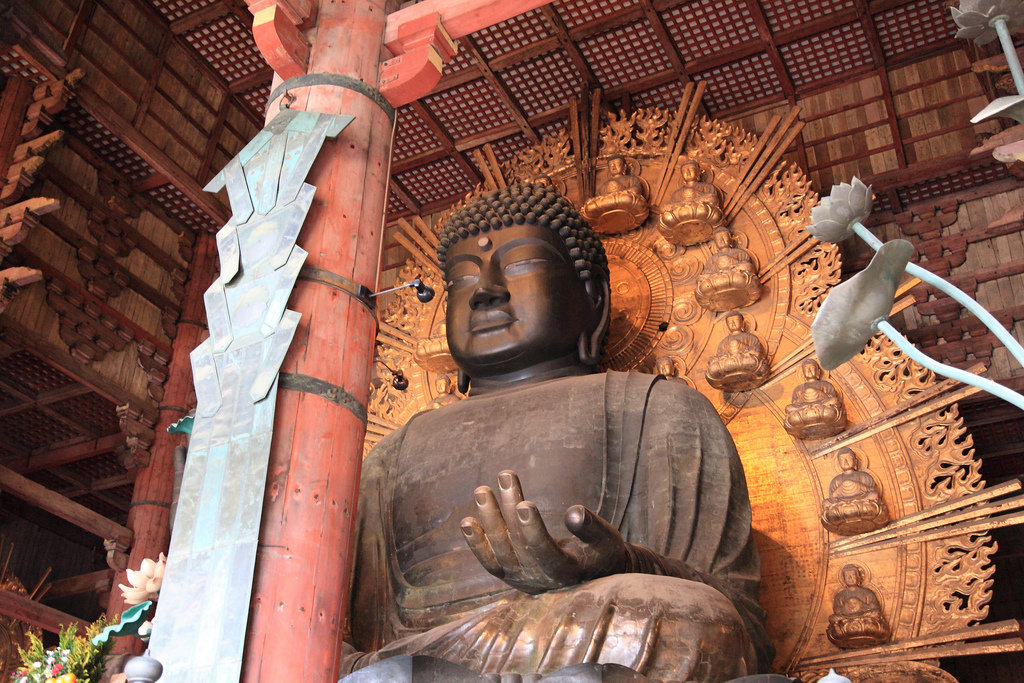 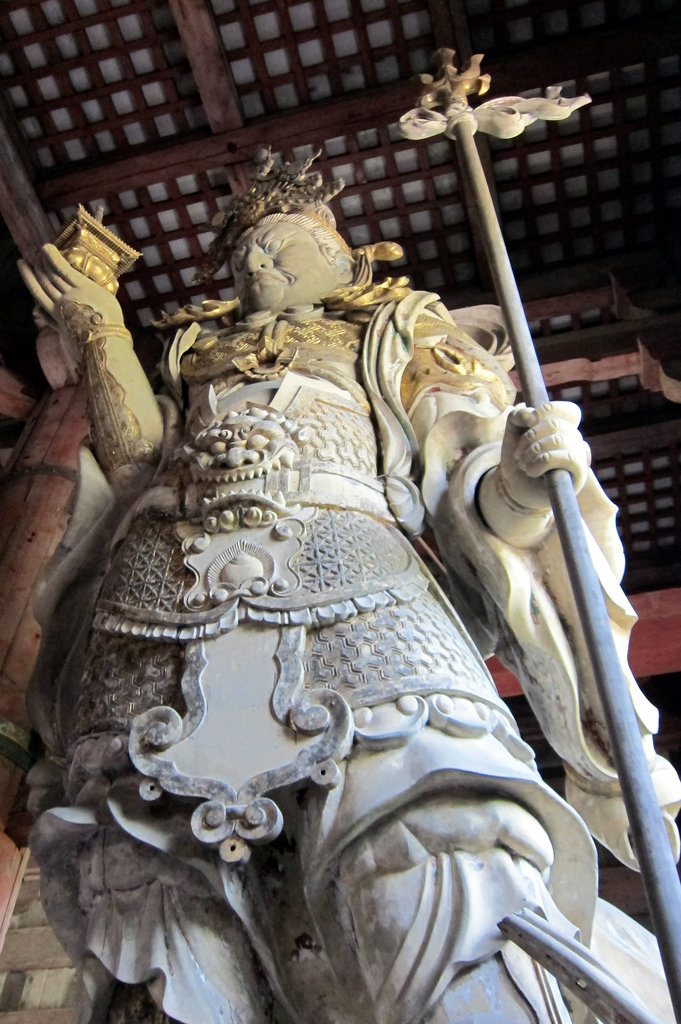