×
What are you looking for?
See all results
Monuments and memorials in Ngong Ping 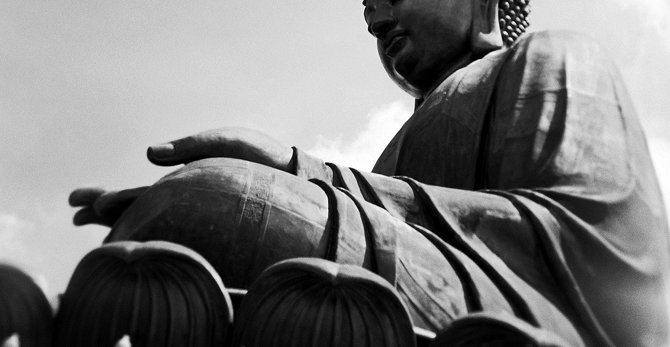 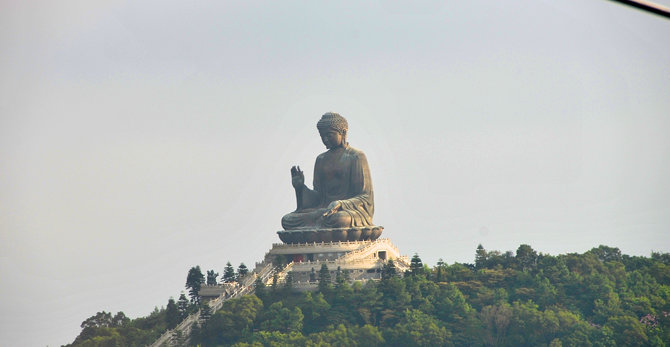 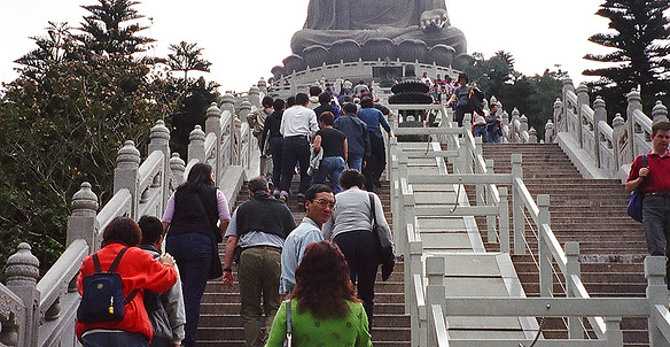 Tian Tan Buddha (simplified Chinese: 天坛大佛; traditional Chinese: 天壇大佛; Mandarin Pinyin: Tiān Tán Dà Fó; Jyutping: tin1 taan4 daai6 fat6), also known as the Big Buddha, is a large bronze statue of a Buddha, completed in 1993, and located at Ngong Ping, Lantau Island, in Hong Kong. The statue is located near Po Lin Monastery and symbolises the harmonious relationship between man and nature, people and religion. It is a major centre of Buddhism in Hong Kong, and is also a popular tourist attraction.

The statue is named Tian Tan Buddha because its base is a model of the Altar of Heaven or Earthly Mount of Tian Tan, the Temple of Heaven in Beijing. It is one of the five large Buddha statues in China. The Buddha statue sits on a lotus throne on top of a three-platform altar. It is surrounded by six smaller bronze statues known as "The Offering of the Six Devas" and are posed offering flowers, incense, lamp, ointment, fruit, and music to the Buddha. These offerings symbolize charity, morality, patience, zeal, meditation, and wisdom, all of which are necessary to enter into nirvana.

The Buddha is 34 metres (110 ft) tall, weighs 250 metric tons (280 short tons), and was the world's tallest outdoor bronze seated Buddha prior to 2007. It reputedly can even be seen from as far away as Macau on a clear day. Visitors have to climb 268 steps in order to reach the Buddha, though the site also features a small winding road to the Buddha for vehicles to accommodate the handicapped.

The Tian Tan Buddha appears serene and dignified. His right hand is raised, representing the removal of affliction. His left hand rests on his lap in a gesture of giving dhana. The Buddha faces north, which is unique among the great Buddha statues, as all others face south.

In addition, there are 3 floors beneath the Buddha statue: The Hall of Universe, The Hall of Benevolent Merit, and The Hall of Remembrance. One of the most renowned features inside is a relic of Gautama Buddha, consisting of some of his alleged cremated remains. There is a huge carved bell inscribed with images of Buddhas in the show room. It was designed to ring every seven minutes, 108 times a day, symbolising the release of 108 kinds of human vexations.

The Tian Tan Buddha was constructed beginning in 1990, and was finished on December 29, 1993, the birthday of Gautama Buddha, the historic Buddha. The statue was formed out of 202 separate pieces of bronze. In addition to the exterior components, there is a strong steel framework inside the statue to support the heavy load and wind pressure. The construction costs of the giant Buddha were estimated to be up to $68 million.

When the statue was completed, monks from around the world were invited to the opening ceremony. Distinguished visitors from mainland China, Hong Kong, Taiwan, India, Japan, Korea, Thailand, Malaysia, Singapore, Sri Lanka, and the United States all took part in the proceedings.

On October 18, 1999, the Hong Kong Post Office issued a stamp depicting the Tian Tan Buddha. The MTR corporation has also issued a tourist souvenir ticket featuring a photograph of the statue.

Po Lin Monastery and the Buddha are open to the public between 10:00 and 17:45. Access to the Buddha is free of charge.

Visitors may also see the nearby monastery, known as the "Buddhist Kingdom in the South," which serves as an international Buddhist retreat, and is one of the largest and most well known in Hong Kong. The monastery was built by three Zen masters in 1920. The main temples have painted vermilion interiors with dragons and many other different Chinese mythical figures on the walls and ceilings. Visitors often spend time in the attached tea garden, the only tea garden in the territory. A five minute walk past the tea garden leads to the "Wisdom Path" - a very large wooden inscription of the Heart Sutra set within a figure 8 to symbolise infinity.

One of the main attractions of this Buddha statue is climbing 268 steps and circling the platform (the lotus) where the Buddha sits.

Also nearby is Lantau Peak, the second highest mountain in Hong Kong.

Visitors can reach the site by bus or taxi, travelling first to Mui Wo (also known as "Silvermine Bay") via ferry from the Outlying Islands piers in Central (pier No. 6) or to Tung Chung station via the MTR. Visitors may then travel to and from the Buddha via the following bus routes:

A gondola lift, the Ngong Ping Skyrail between Tung Chung and Ngong Ping, provides another means of access.

Summary facts about other great Buddha statues are listed below.

Lívia Aguiar
The largest sitting buddha in the world! And the mist made it even more special

Ngong Ping (Шаблон:Zh) is a highland in the western part of Lanta

The Ngong Ping 360 is a tourism project on Lantau Island in Hong Kong.

Fan Lau Fort (Chinese: 分流炮台) is a fort in Fan Lau, the southwe

The Tsing Ma Bridge is a bridge in Hong Kong. It is the world's 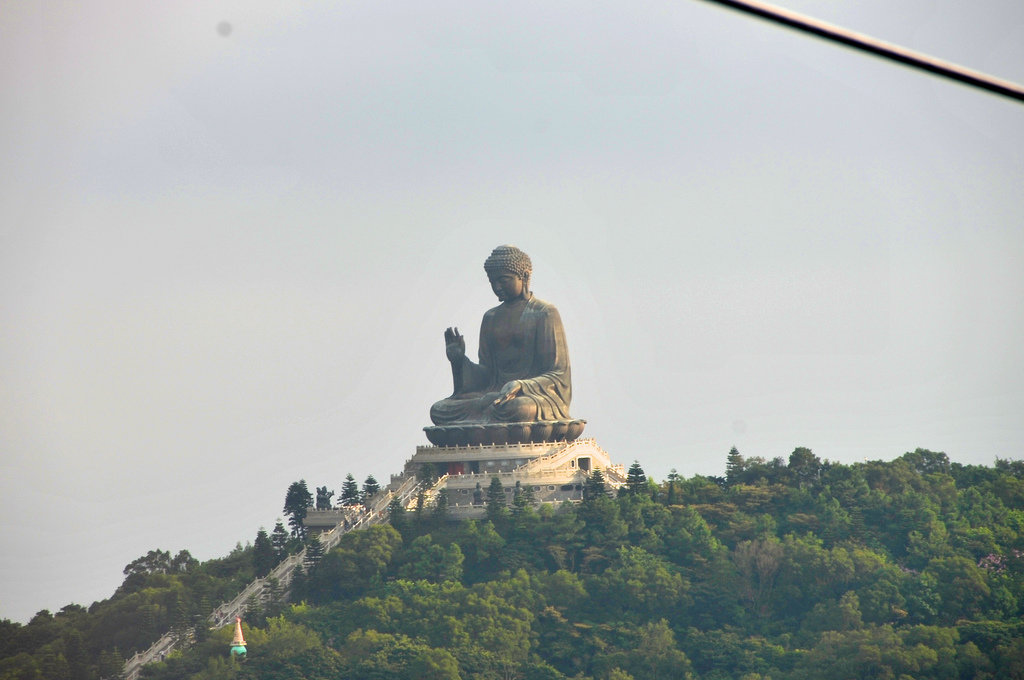 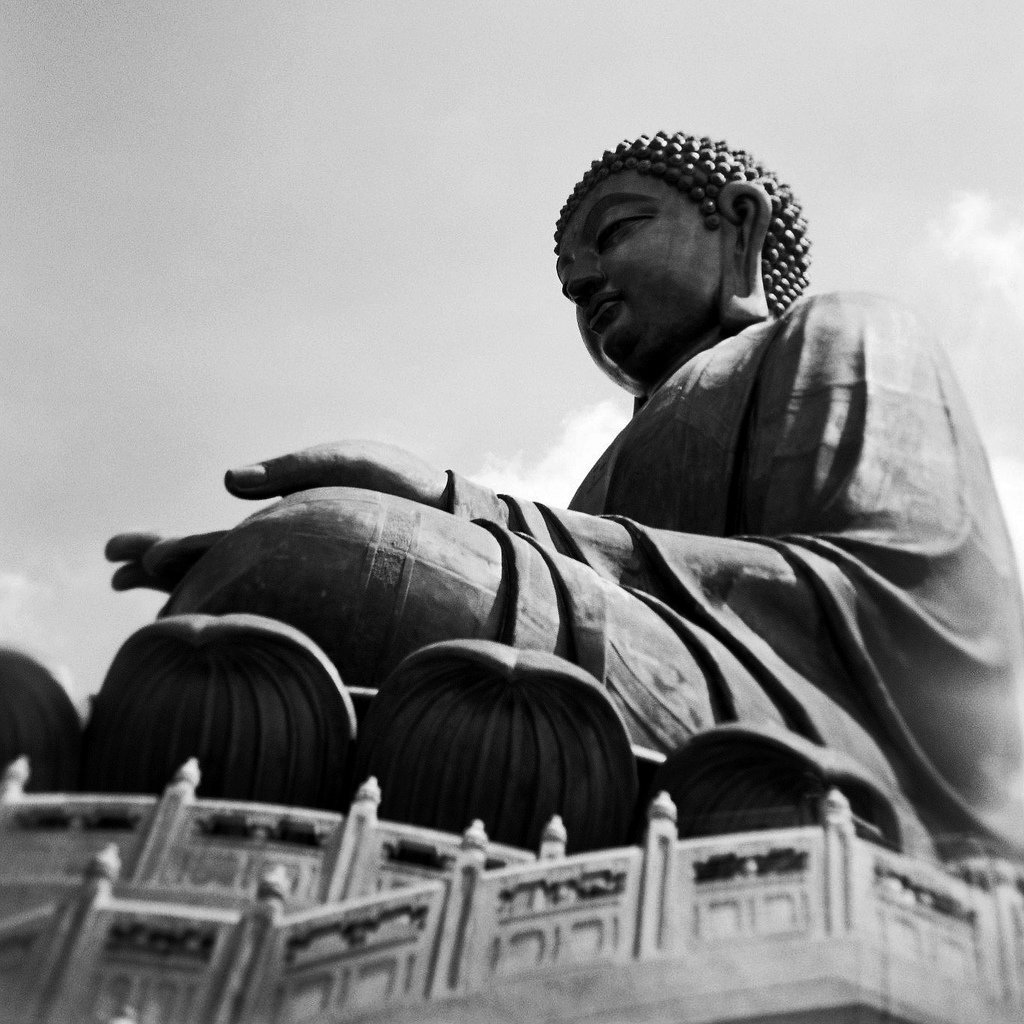 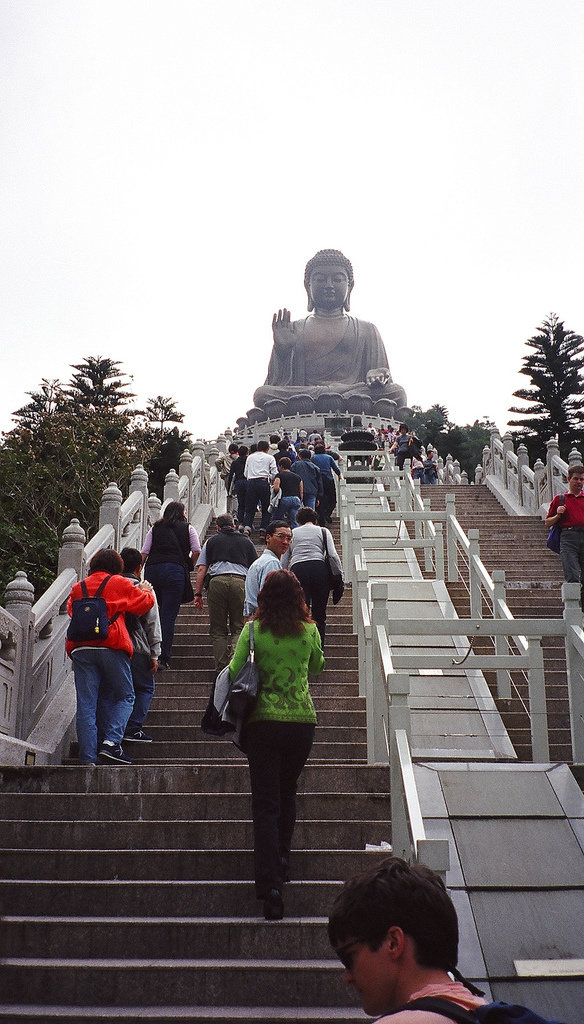 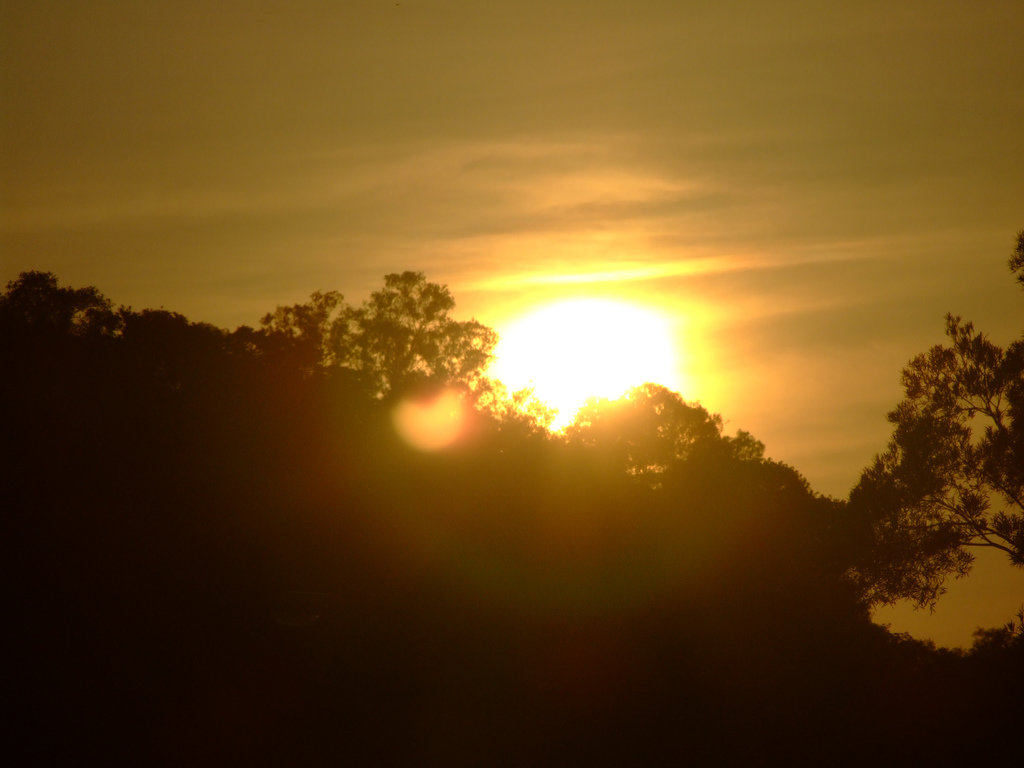 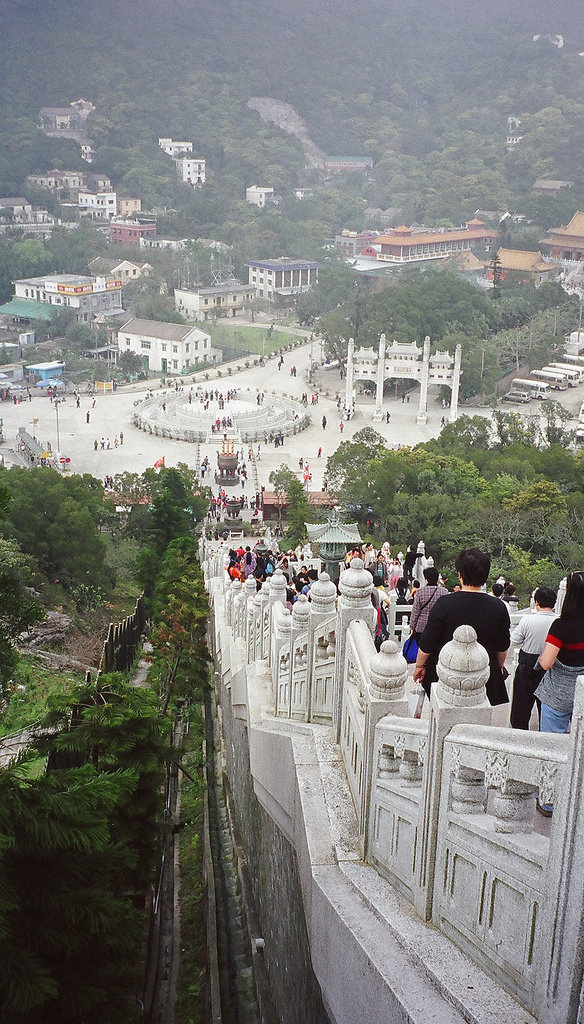 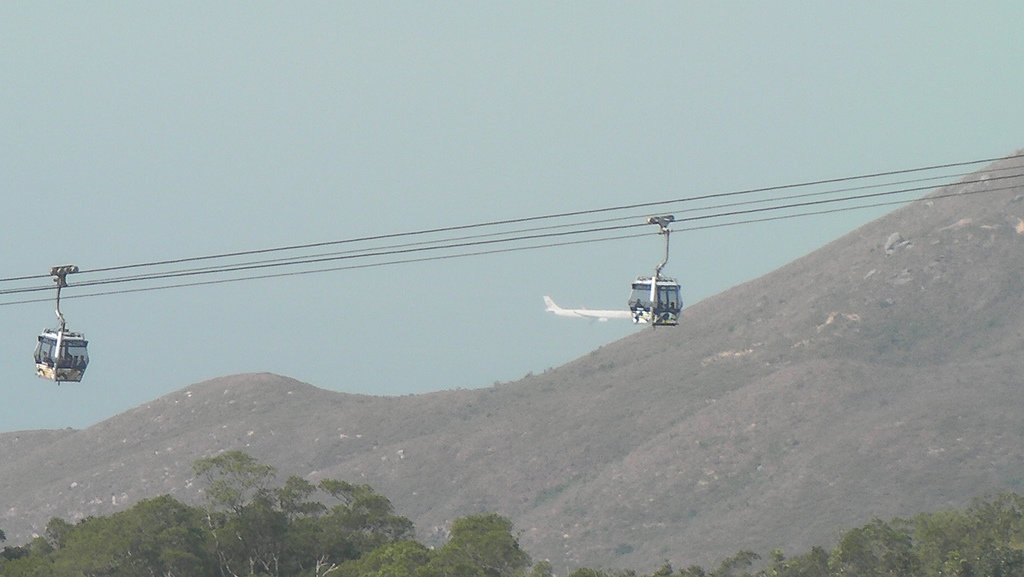 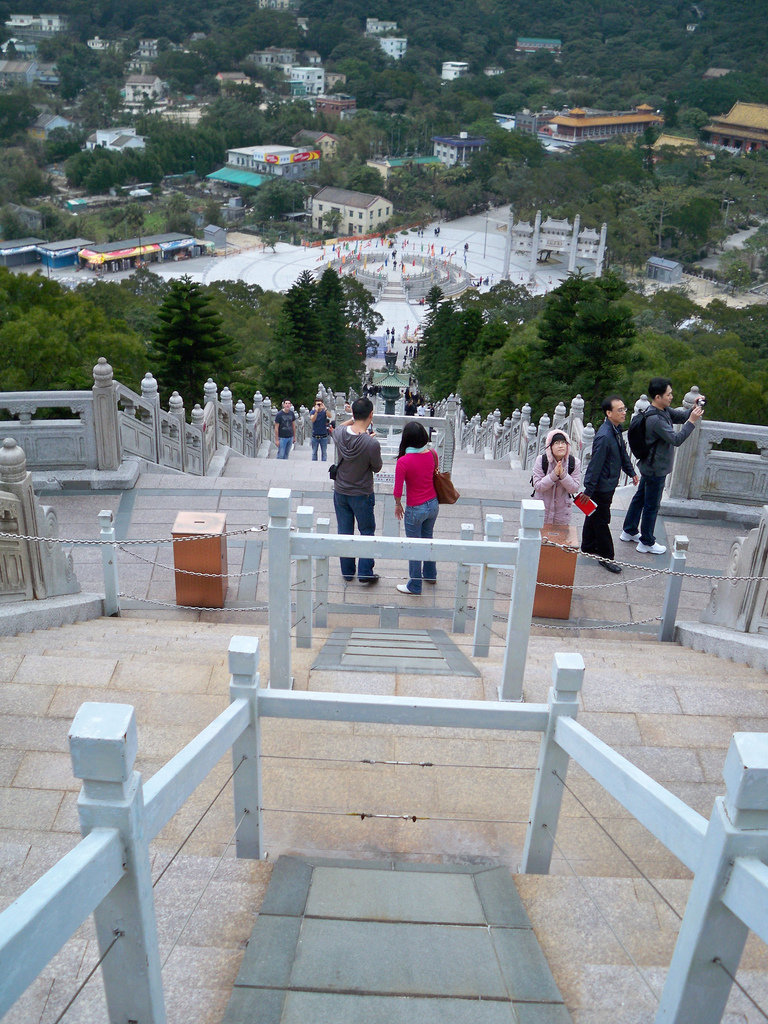 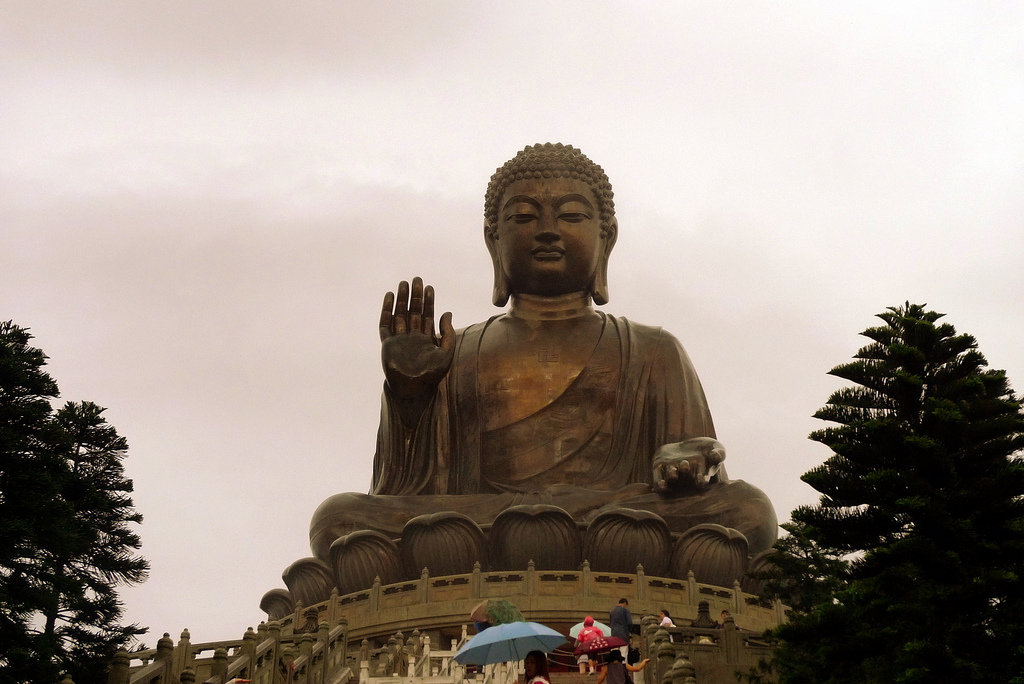 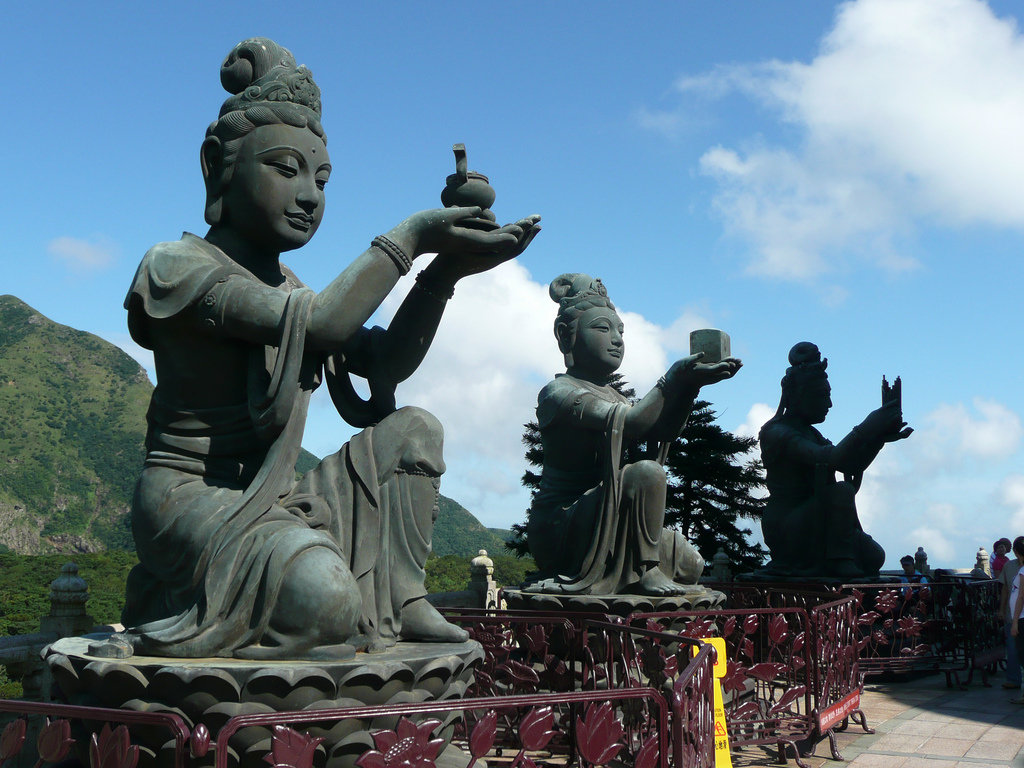 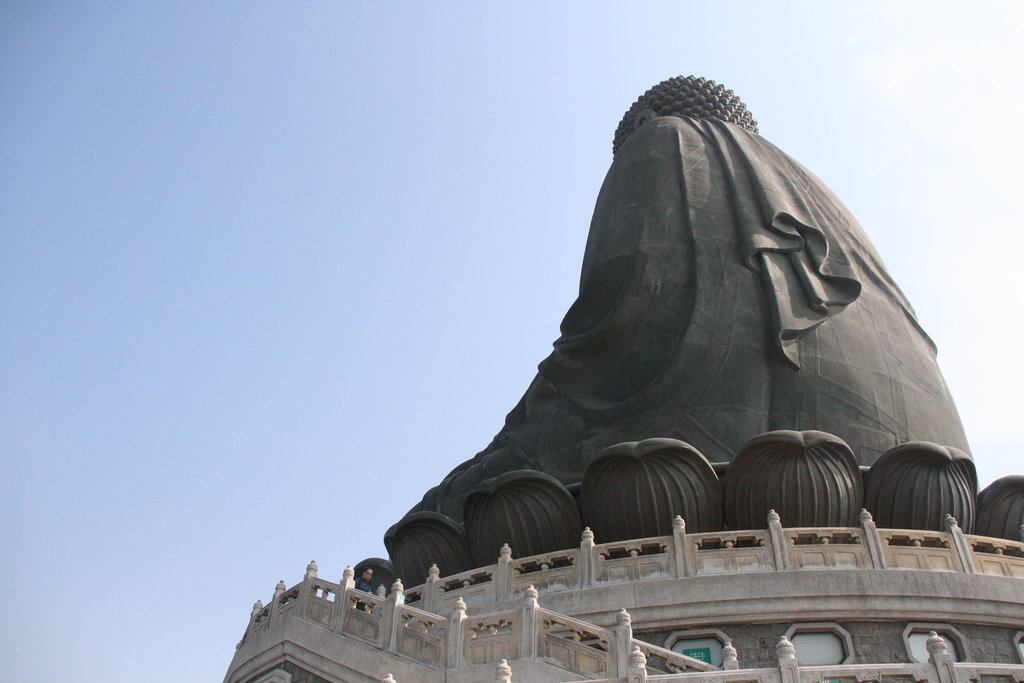 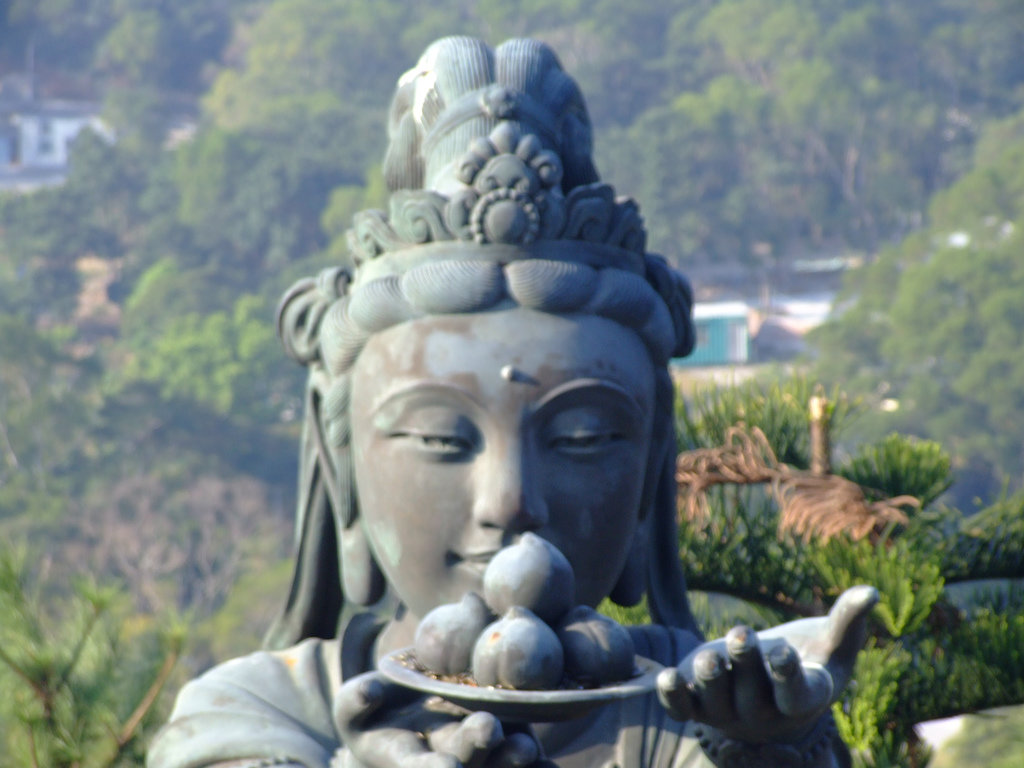 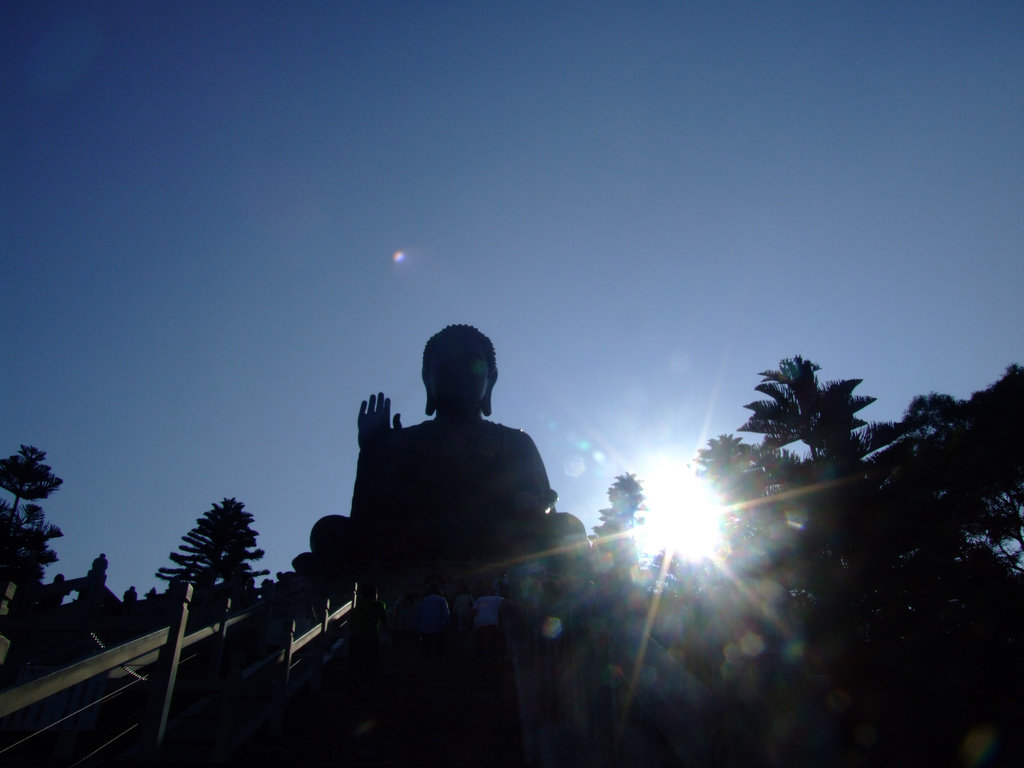 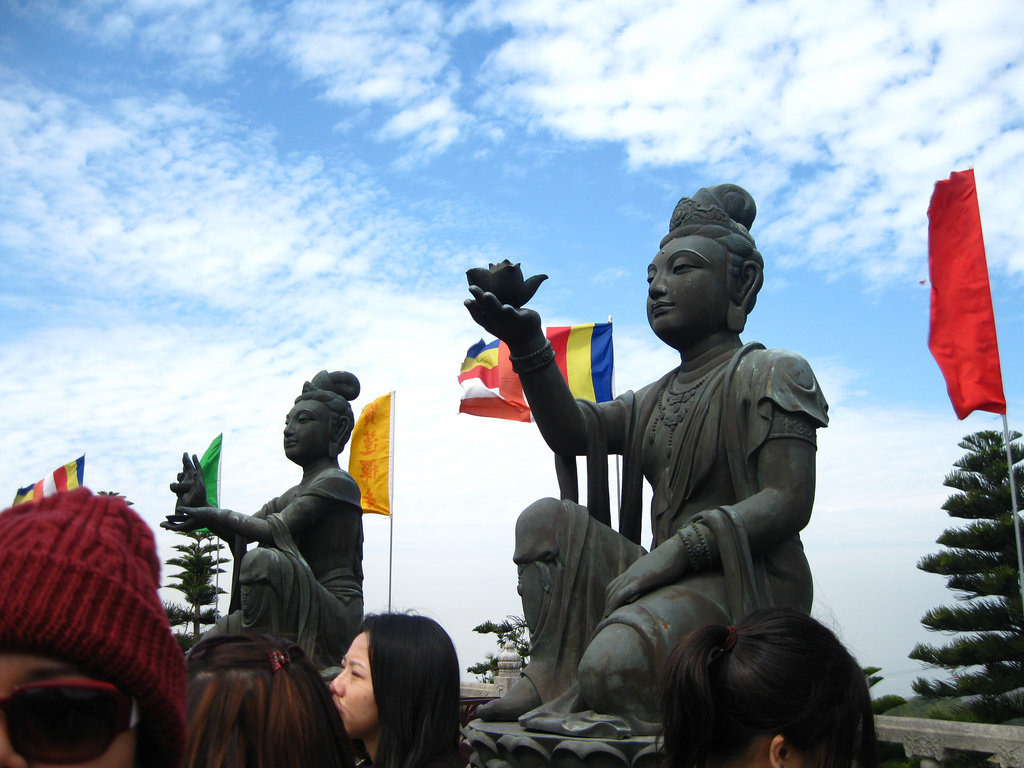 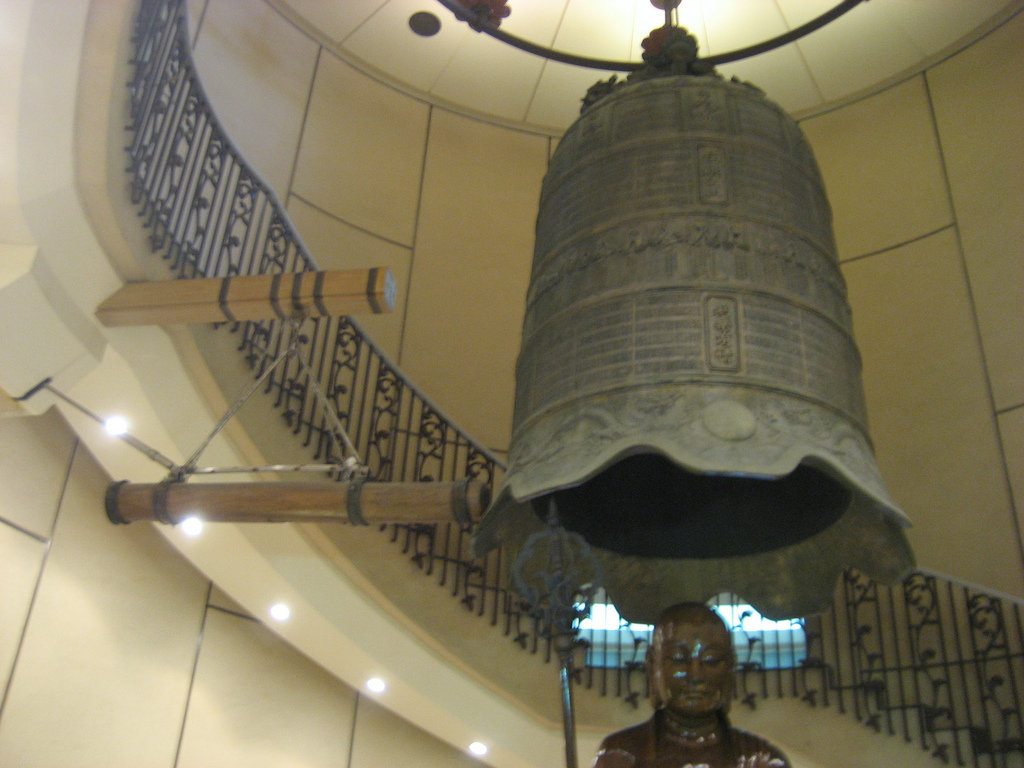