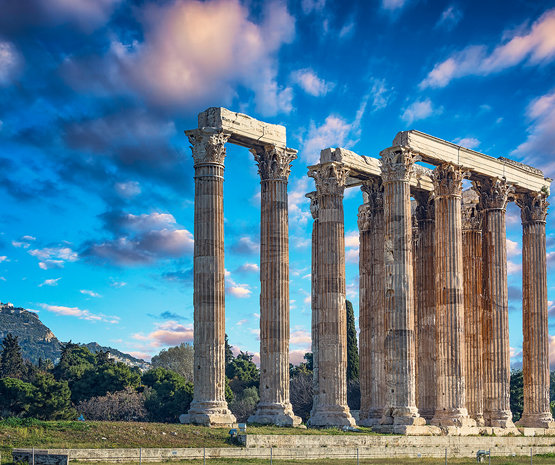 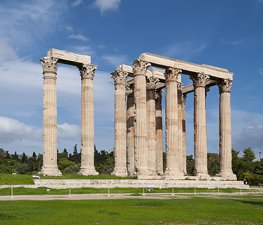 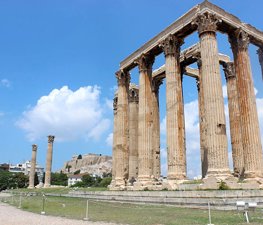 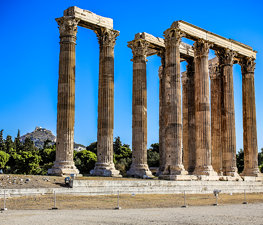 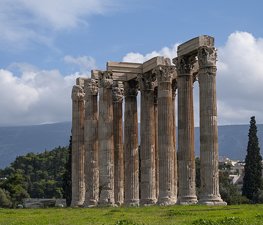 The Temple of Olympian Zeus (Greek: Ναός του Ολυμπίου Διός or Naos tou Olimpiou Dios), also known as the Olympieion, is a colossal ruined temple in the centre of the Greek capital Athens that was dedicated to Zeus, king of the Olympian gods. Construction began in the 6th century BC during the rule of the Athenian tyrants, who envisaged building the greatest temple in the ancient world, but it was not completed until the reign of the Roman Emperor Hadrian in the 2nd century AD some 650 years after the project had begun. During the Roman periods it was renowned as the largest temple in Greece and housed one of the largest cult statues in the ancient world.

The temple's glory was shortlived, as it fell into disuse after being pillaged in a barbarian invasion in the 3rd century AD. It was probably never repaired and was reduced to ruins thereafter. In the centuries after the fall of the Roman Empire, the temple was extensively quarried for building materials to supply building projects elsewhere in the city. Despite this, substantial remains remain visible today and it continues to be a major tourist attraction.

The temple is located about 500 m (1640 feet) south-east of the Acropolis, and about 700 m (2,300 feet) south of the center of Athens, Syntagma Square. Its foundations were laid on the site of an ancient outdoor sanctuary dedicated to Zeus. An earlier temple had stood there, constructed by the tyrant Pisistratus around 550 BC. The building was demolished after the death of Peisistratos and the construction of a colossal new Temple of Olympian Zeus was begun around 520 BC by his sons, Hippias and Hipparchos. They sought to surpass two famous contemporary temples, the Heraion of Samos and the Temple of Artemis at Ephesus, which was one of the Seven Wonders of the Ancient World. Designed by the architects Antistates, Callaeschrus, Antimachides and Porinus, the Temple of Olympian Zeus was intended to be built of local limestone in the Doric style on a colossal platform measuring 41 m (134.5 feet) by 108 m (353.5) feet. It was to be flanked by a double colonnade of eight columns across the front and back and twenty-one on the flanks, surrounding the cella.

The work was abandoned when the tyranny was overthrown and Hippias was expelled in 510 BC. Only the platform and some elements of the columns had been completed by this point, and the temple remained in this state for 336 years. The temple was left unfinished during the years of Athenian democracy, apparently because the Greeks thought it hubristic to build on such a scale. In the treatise Politics, Aristotle cited the temple as an example of how tyrannies engaged the populace in great works for the state and left them no time, energy or means to rebel.

It was not until 174 BC that the Seleucid king Antiochus IV Epiphanes, who presented himself as the earthly embodiment of Zeus, revived the project and placed the Roman architect Decimus Cossutius in charge. The design was changed to feature three rows of eight columns across the front and back of the temple and a double row of twenty on the flanks, for a total of 104 columns. The columns would stand 17 m (55.5 feet) high and 2 m (6.5 ft) in diameter. The building material was changed to the expensive but high-quality Pentelic marble and the order was changed from Doric to Corinthian, marking the first time that this order had been used on the exterior of a major temple. However, the project ground to a halt again in 164 BC with the death of Antiochus. The temple was still only half-finished by this stage.

Serious damage was inflicted on the partly-built temple by Lucius Cornelius Sulla's sack of Athens in 86 BC. While looting the city, Sulla seized some of the incomplete columns and transported them back to Rome, where they were re-used in the Temple of Jupiter on the Capitoline Hill. A half-hearted attempt was made to complete the temple during Augustus' reign as the first Roman emperor, but it was not until the accession of Hadrian in the 2nd century AD that the project was finally completed around 650 years after it had begun.

In 124-125 AD, when the strongly Philhellene Hadrian visited Athens, a massive building programme was begun that included the completion of the Temple of Olympian Zeus. A walled marble-paved precinct was constructed around the temple, making it a central focus of the ancient city. Cossutius's design was used with few changes and the temple was formally dedicated by Hadrian in 132, who took the title of "Panhellenios" in commemoration of the occasion. The temple and the surrounding precinct were adorned with numerous statues depicting Hadrian, the gods and personifications of the Roman provinces. A colossal statue of Hadrian was raised behind the building by the people of Athens in honour of the emperor's generosity. An equally colossal chryselephantine statue of Zeus occupied the cella of the temple. The statue's form of construction was unusual, as the use of chryselephantine was by this time regarded as archaic. It has been suggested that Hadrian was deliberately imitating Phidias' famous statue of Athena Parthenos in the Parthenon, seeking to draw attention to the temple and himself by doing so.

The Temple of Olympian Zeus was badly damaged during the Herulian sack of Athens in 267. It is unlikely to have been repaired, given the extent of the damage to the rest of the city. Assuming that it was not abandoned it would certainly have been closed down in 425 by the Christian emperor Theodosius II when he prohibited the worship of the old Roman and Greek gods. Material from the (presumably now ruined) building was incorporated into a basilica constructed nearby during the 5th or 6th century AD.

Over the following centuries, the temple was systematically quarried to provide building material for the houses and churches of medieval Athens. By the end of the Byzantine period, it had been almost totally destroyed; when Ciriaco de' Pizzicolli (Cyriacus of Ancona) visited Athens in 1436 he found only 21 of the original 104 columns still standing. The fate of one of the columns is recorded by a Greek inscription on one of the surviving columns, which states that "on 27 April 1759 he pulled down the column". This refers to the Turkish governor of Athens, Tzisdarakis, who is recorded by a chronicler as having "destroyed one of Hadrian's columns with gunpowder" in order to re-use the marble to make plaster for the mosque that he was building in the Monastiraki district of the city. During the Ottoman period the temple was known to the Greeks as the Palace of Hadrian, while the Turks called it the Palace of Belkis, from a Turkish legend that the temple had been the residence of Solomon's wife.

Fifteen columns remain standing today and a sixteenth column lies on the ground where it fell during a storm in 1852. Nothing remains of the cella or the great statue that it once housed.

The temple was excavated in 1889-1896 by Francis Penrose of the British School in Athens (who also played a leading role in the restoration of the Parthenon), in 1922 by the German archaeologist Gabriel Welter and in the 1960s by Greek archaeologists led by Ioannes Travlos. The temple, along with the surrounding ruins of other ancient structures, is a historical precinct administered by Ephorate of Antiquites of the Greek Interior Ministry.

On 21 January 2007, a group of Hellenic neopagans held a ceremony honoring Zeus on the grounds of the temple. The event was organized by Ellinais, an organization which won a court battle to obtain recognition for Ancient Greek religious practices in the fall of 2006.

Sander Zuurhout
Absolutely stunning! A must-visit. Buy the 30€ ticket which includes Acropolis and 4 more archeological sites. So you can skip the line there.

Johnny Hugel
Amazing site with great access to the temple and Acropolis views. Great first stop for buying your tickets to all the sites and skipping the line at the Acropolis.

David Heiser
Incredibly impressive. Great view of the sun setting over the Acropolis. Got in for free on a Saturday evening. Not sure how.

Murat
Walking distance of 10-15min away from Acropolis. Very ancient and quite impressive. Takes 20-30 min to walk around the remnant columns. A must-see attraction.

Amirpasha Mozaffari
We visited it in the middle of the day, and it was not crowded. It is also an excellent option to buy Acropolis joint tickets to escape the long queue there.
Load more comments
foursquare.com
9.1/10
Николай Кугаевский, Андрей Гордеев and 107,679 more people have been here
I've been here
Add to wishlist

Temple of Olympian Zeus on Foursquare 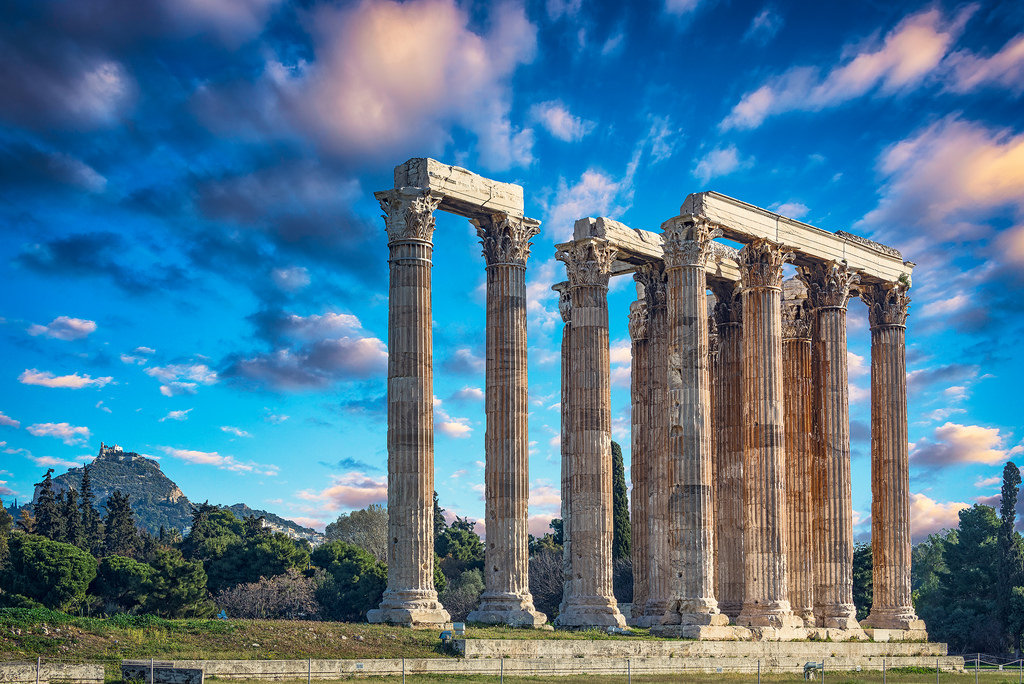 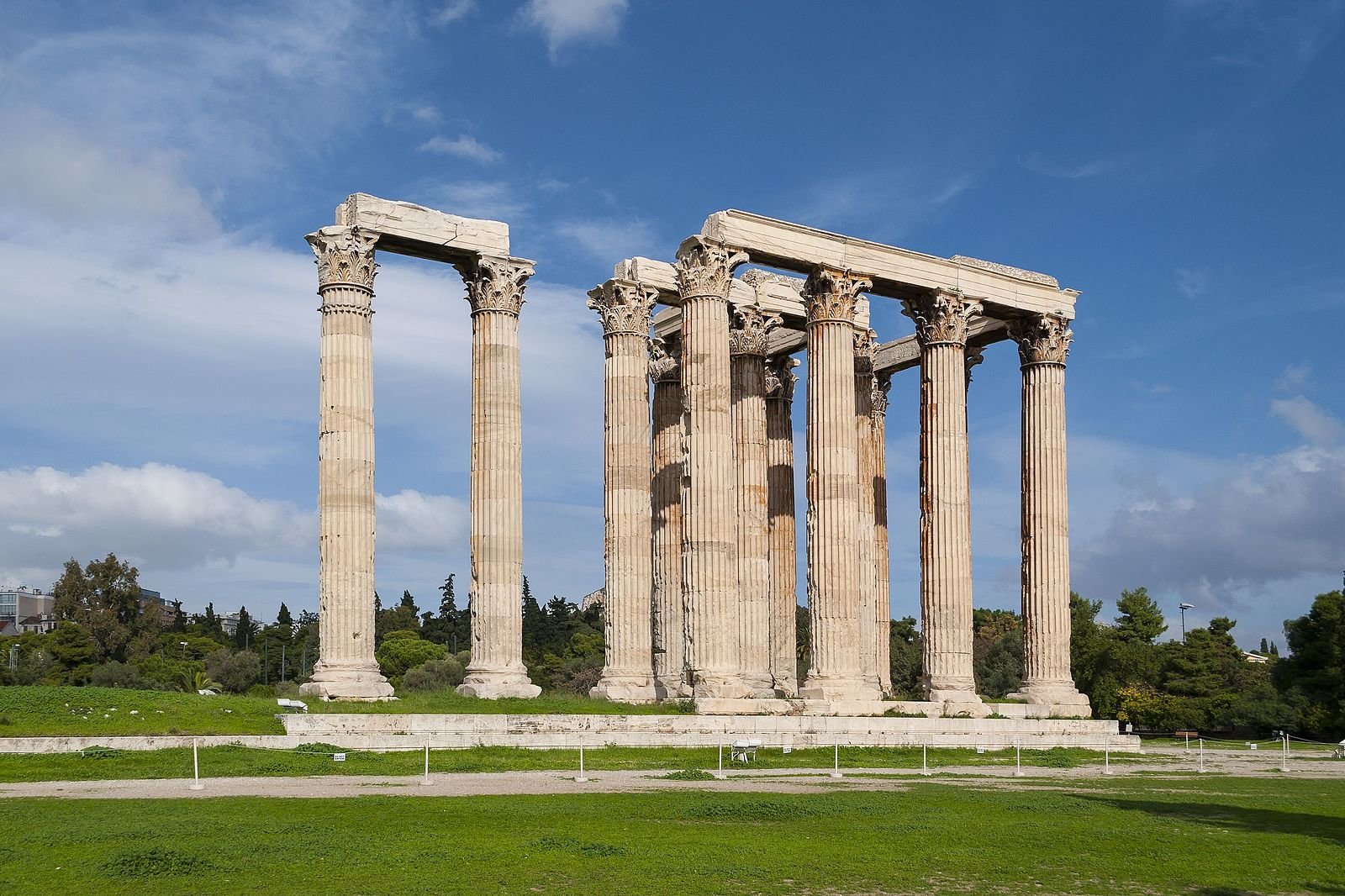 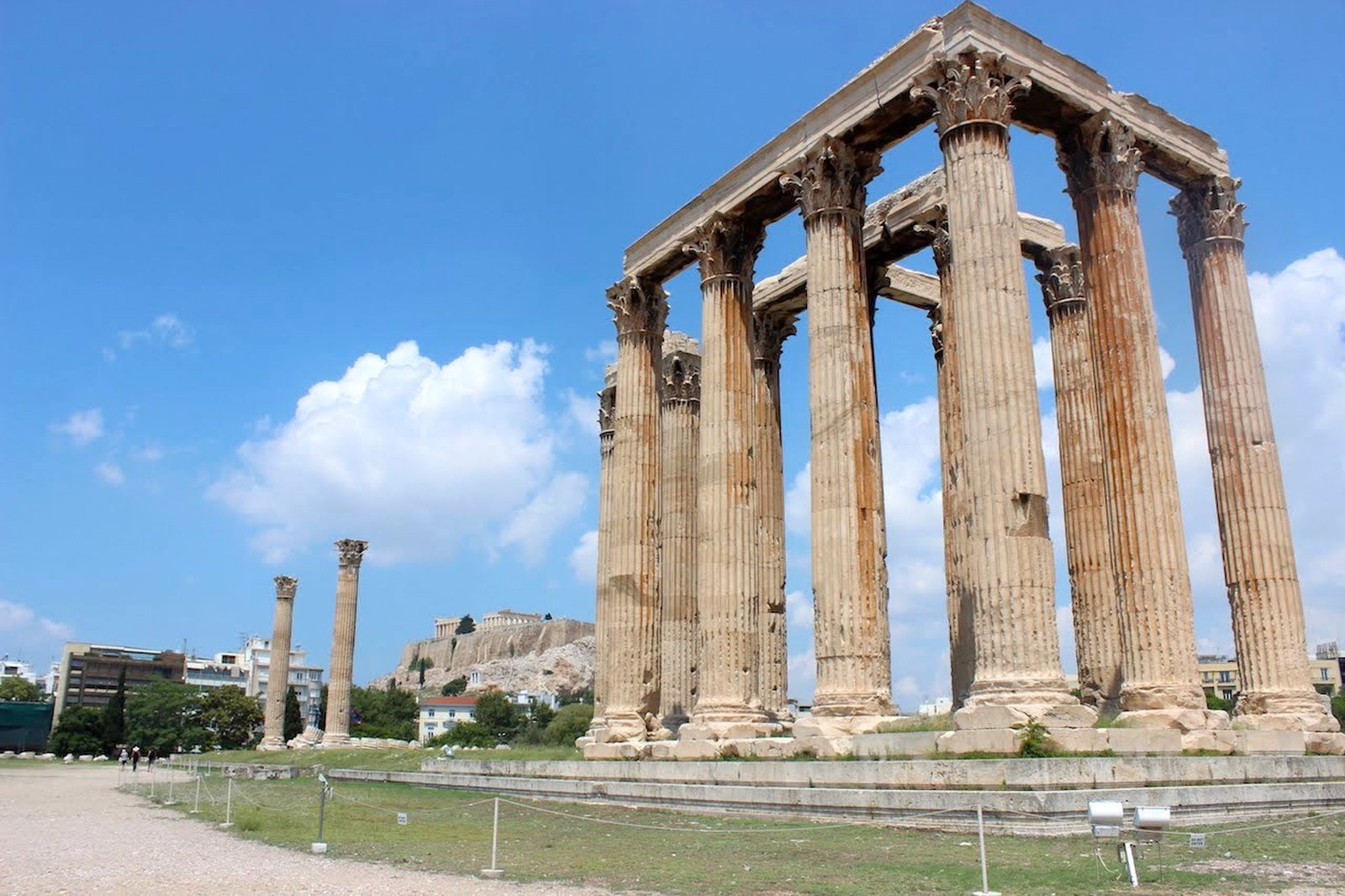 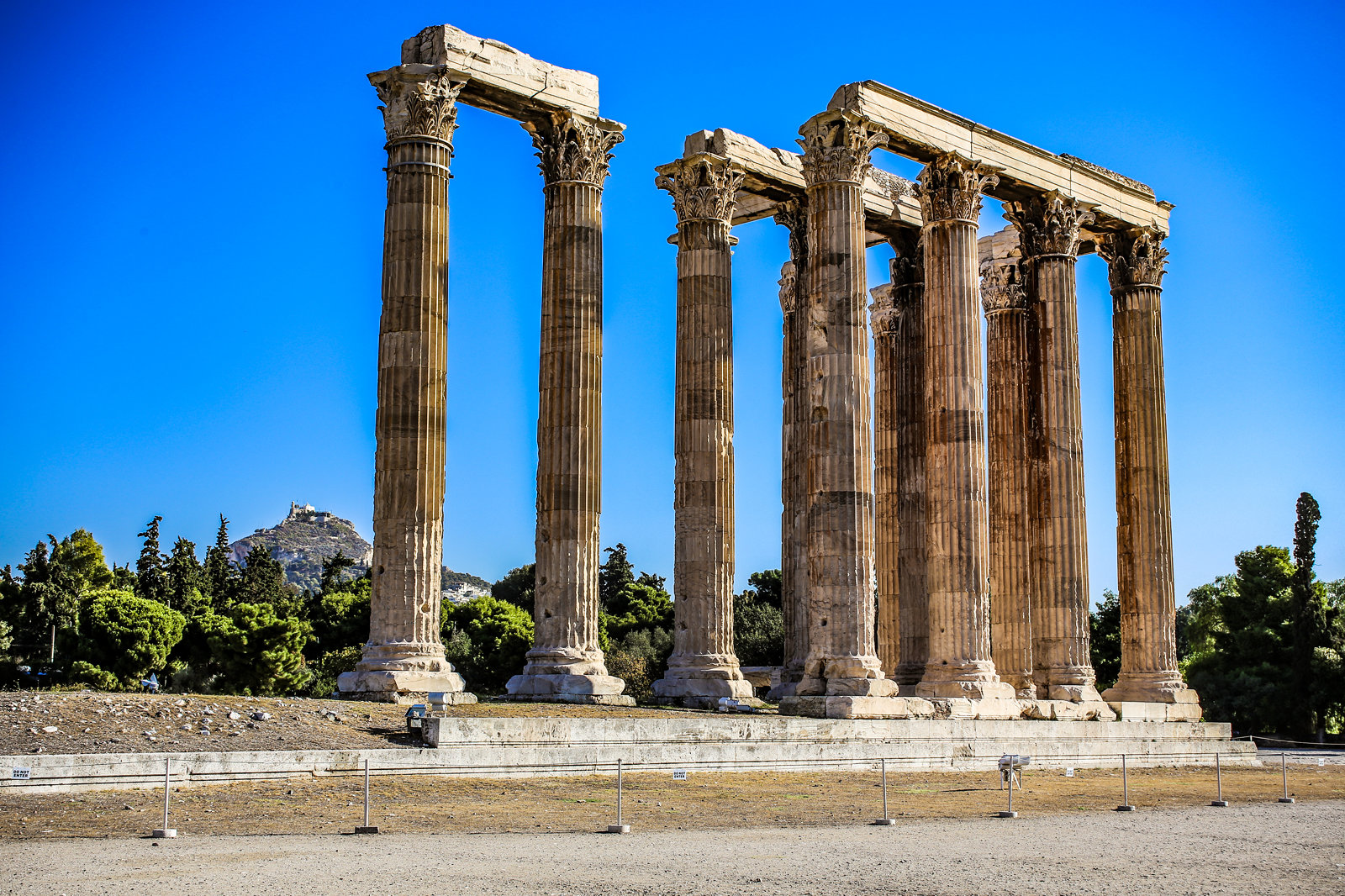 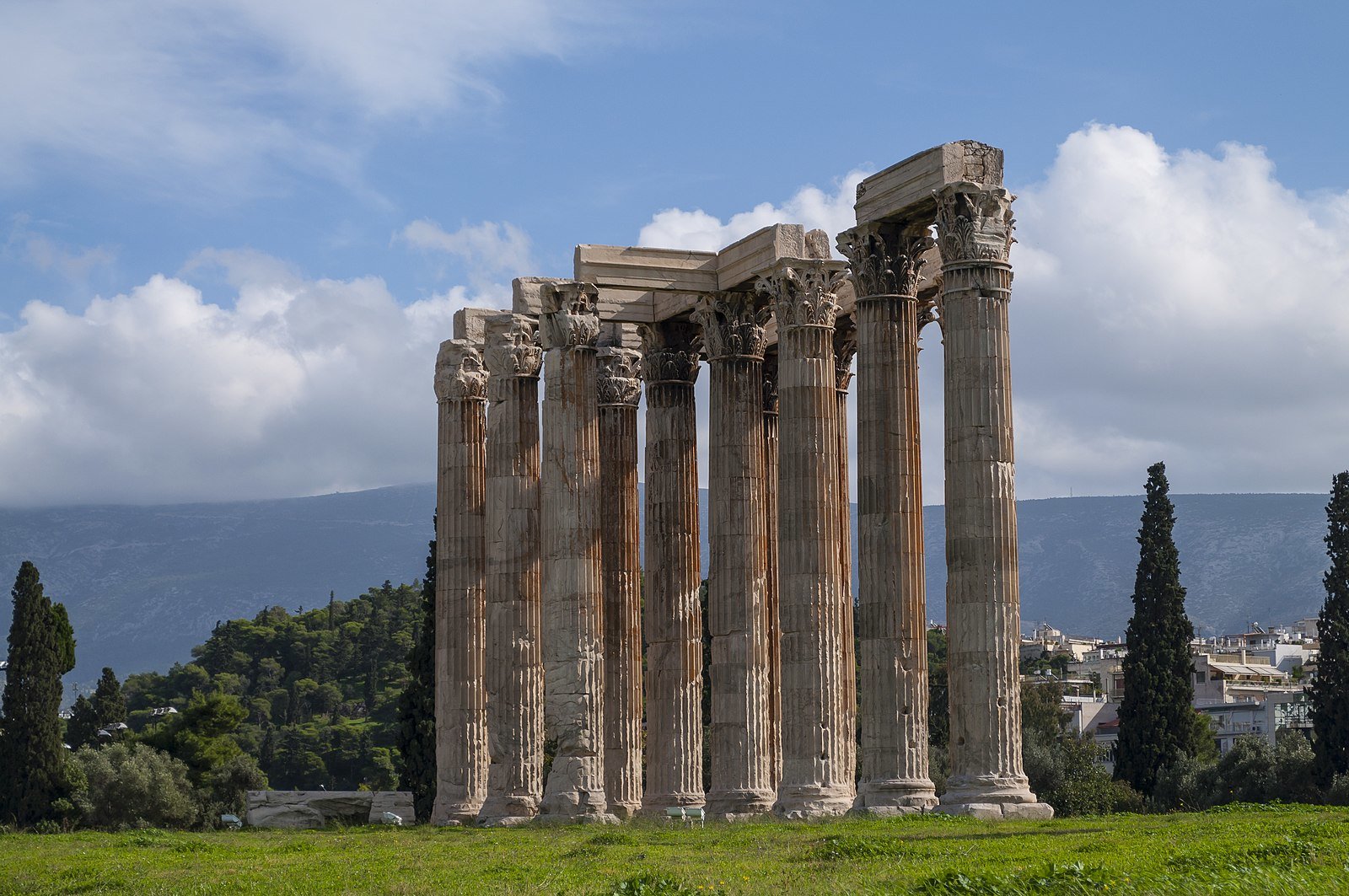 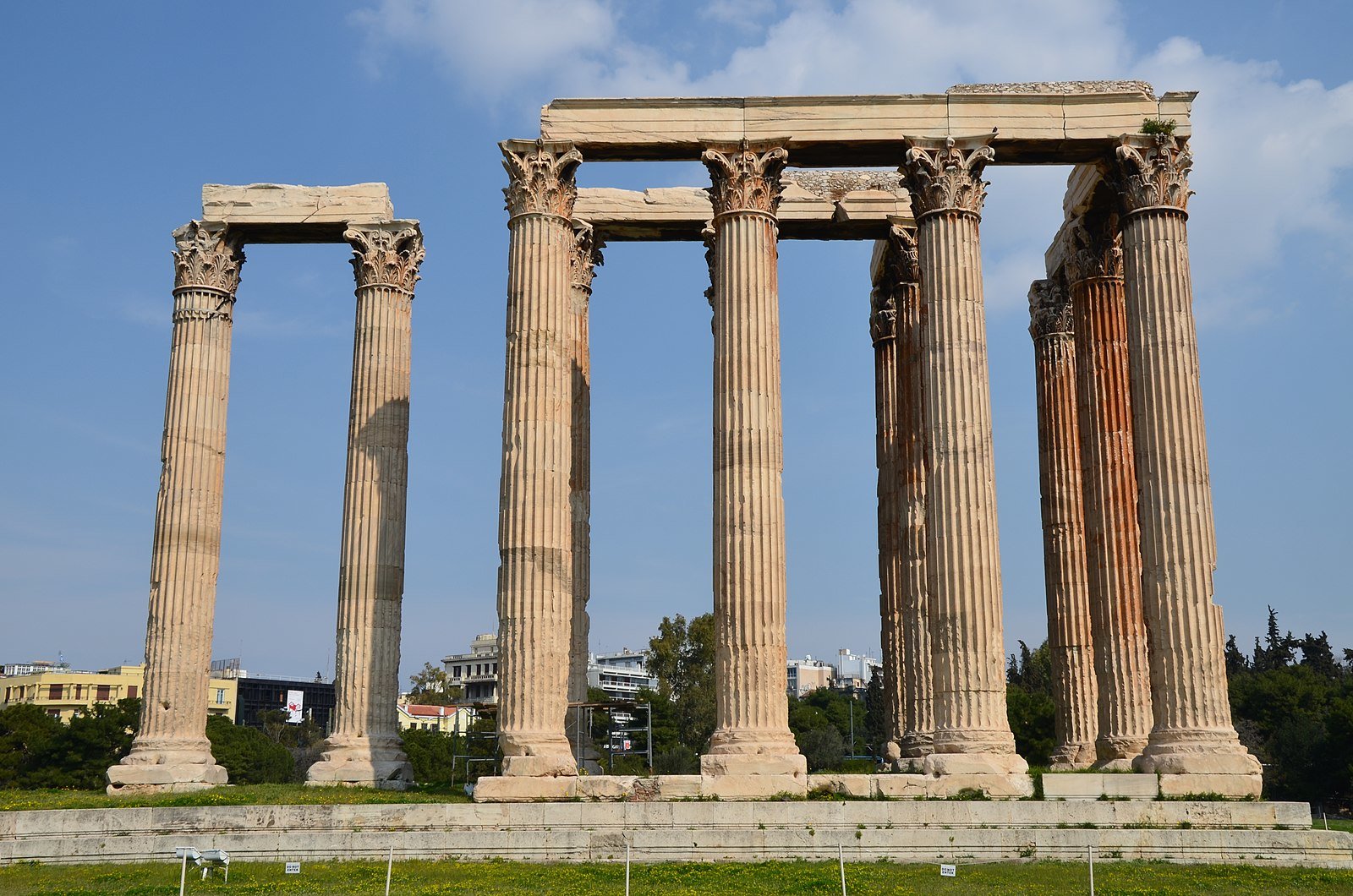 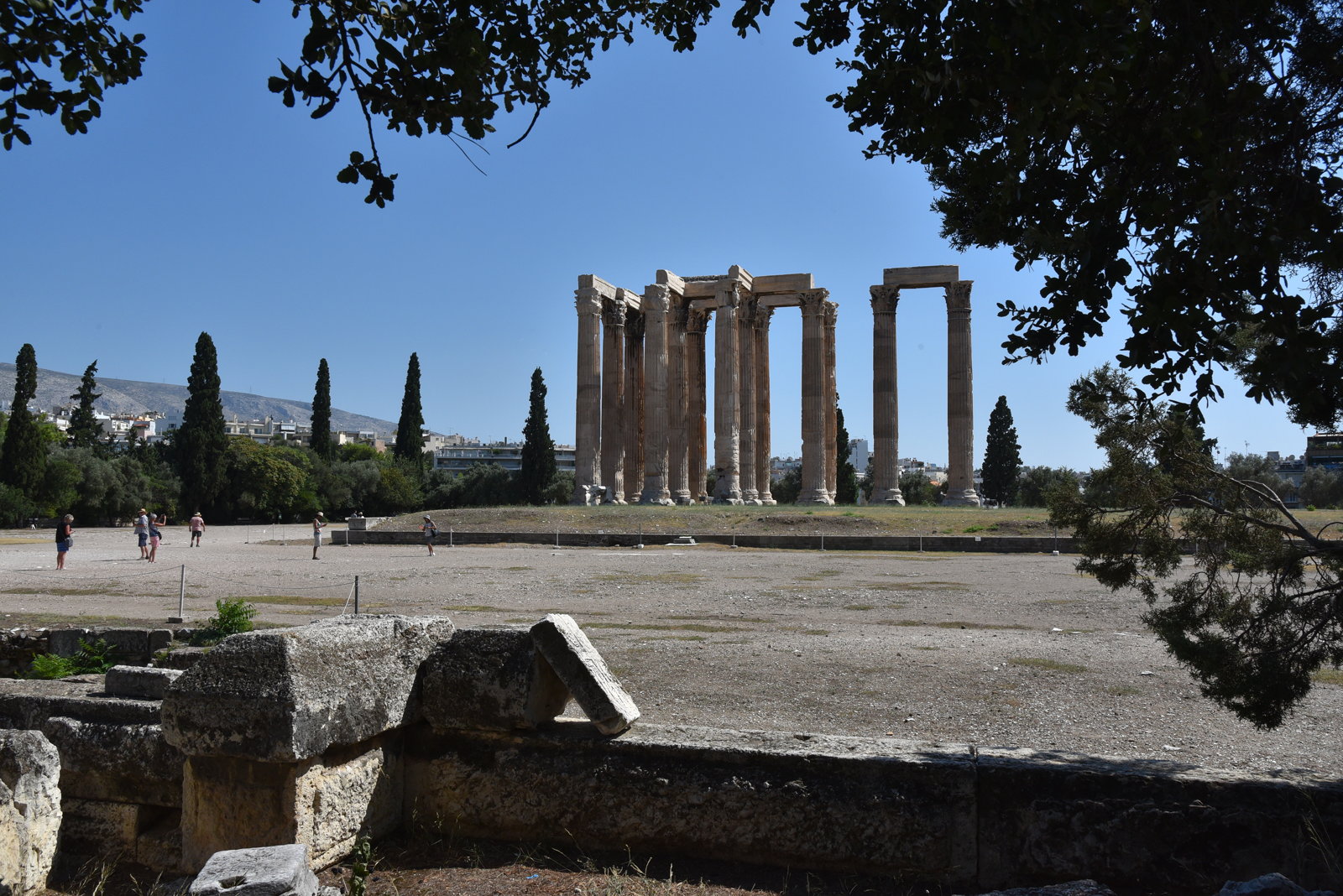 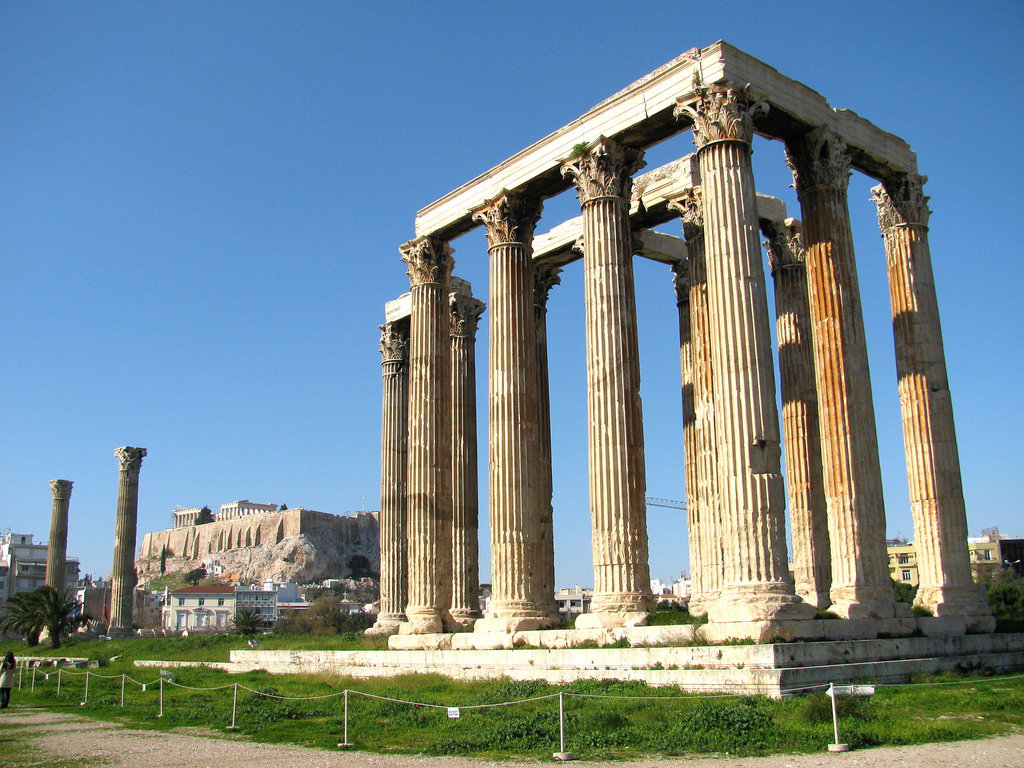 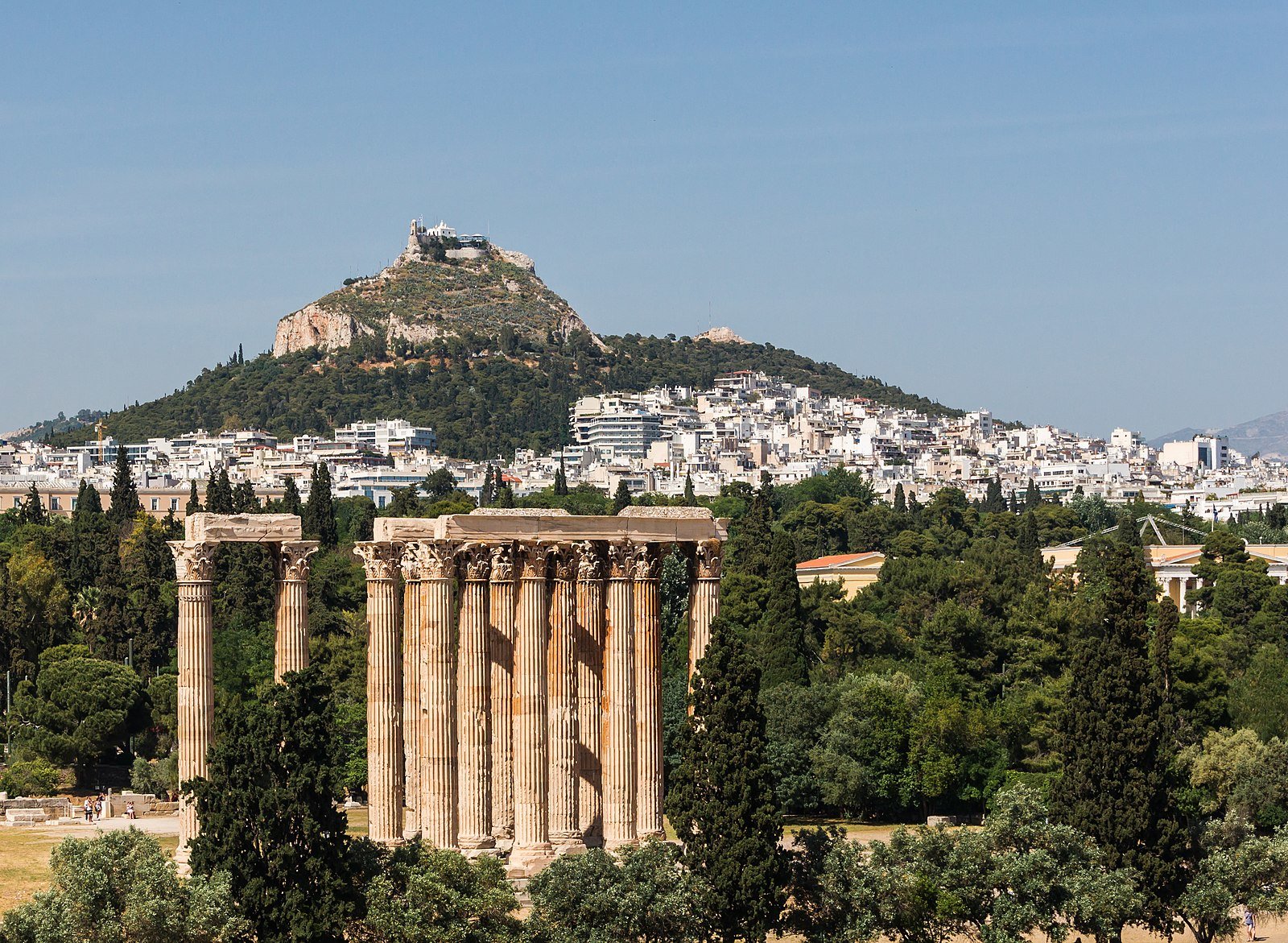 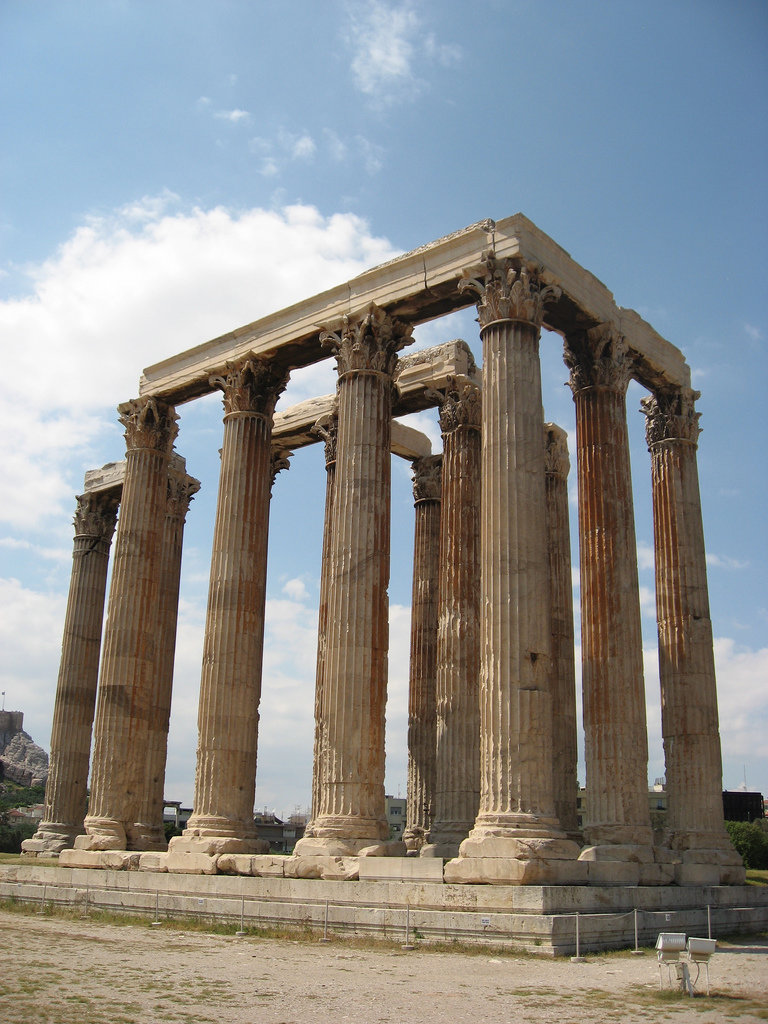 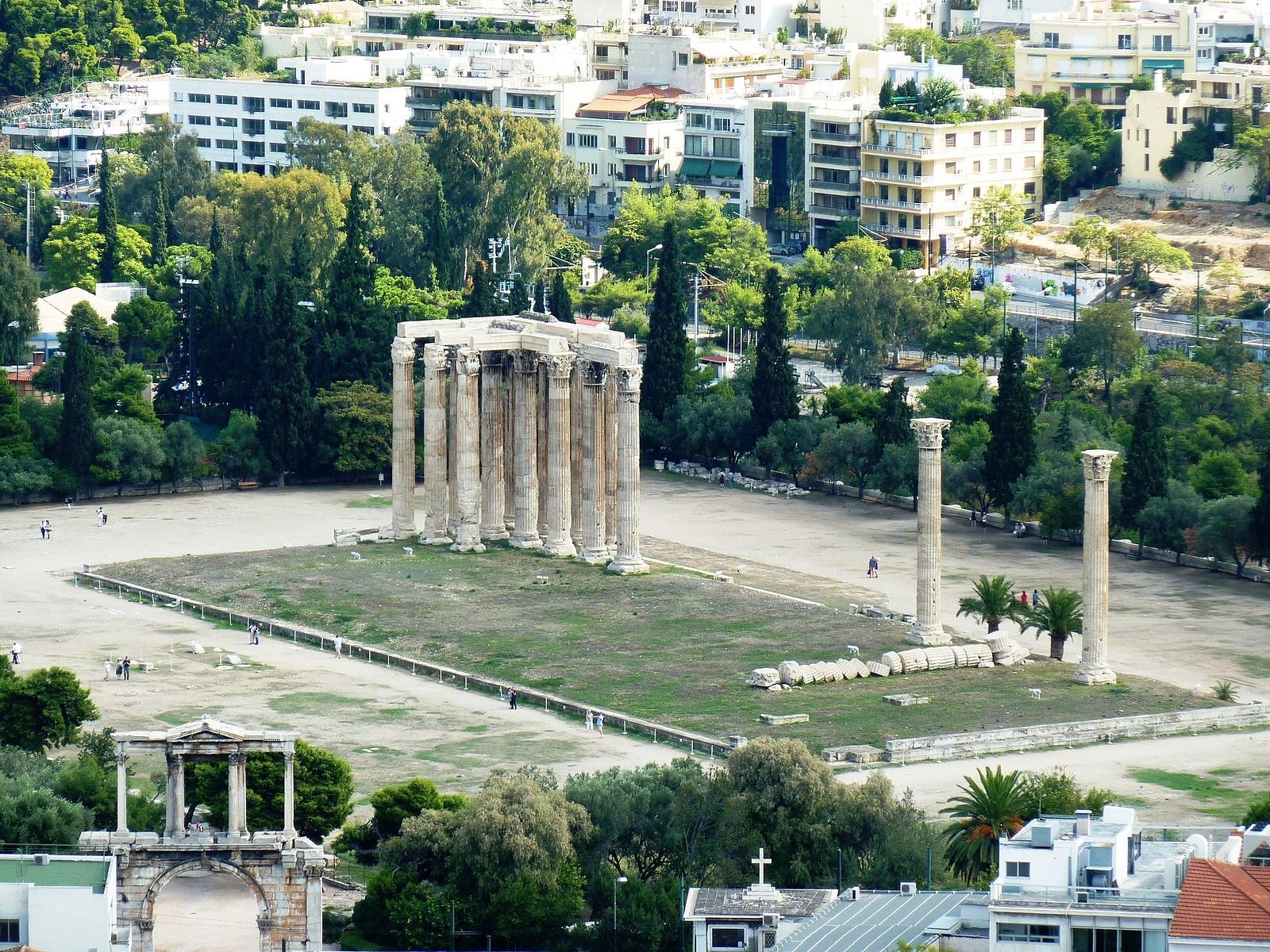 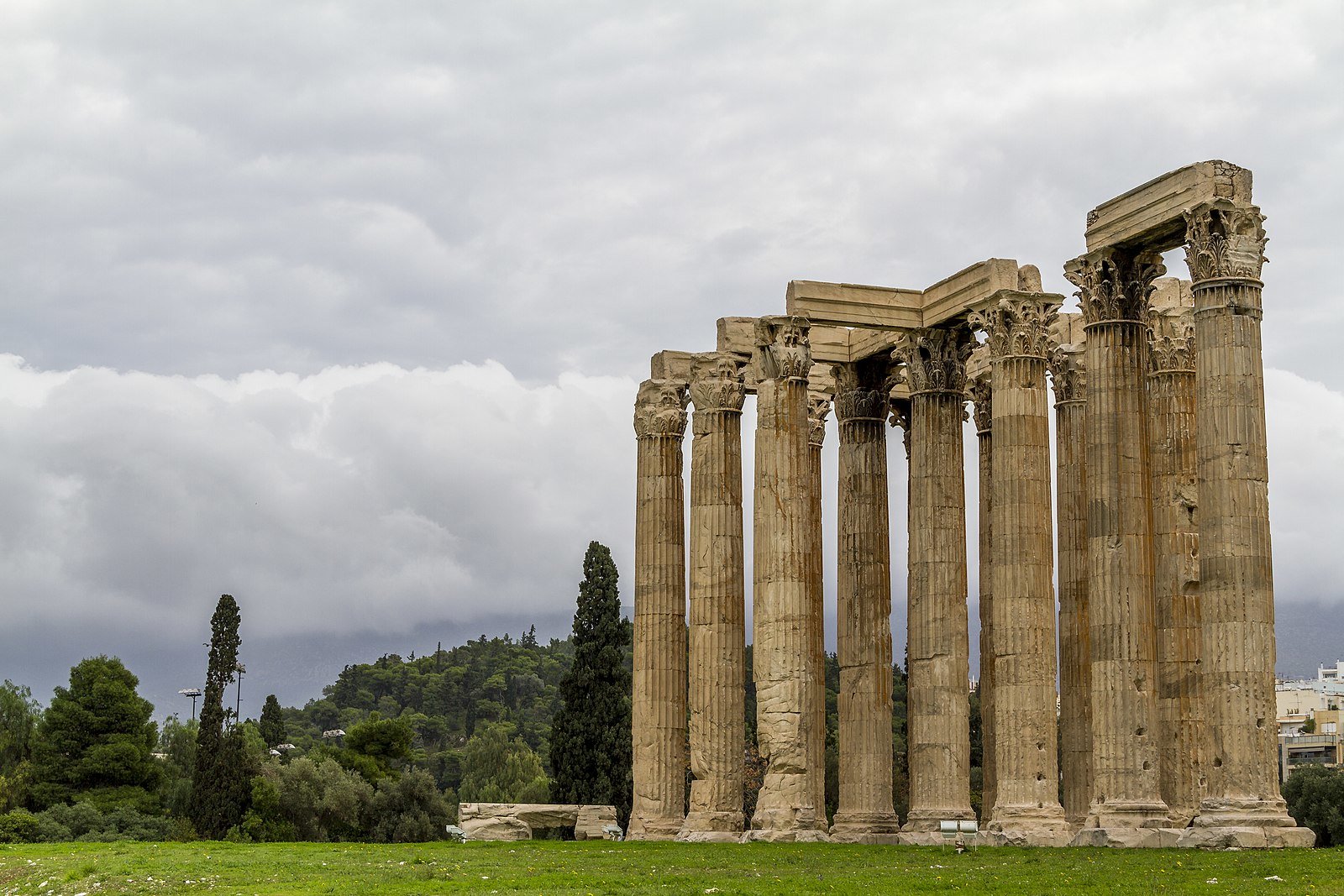 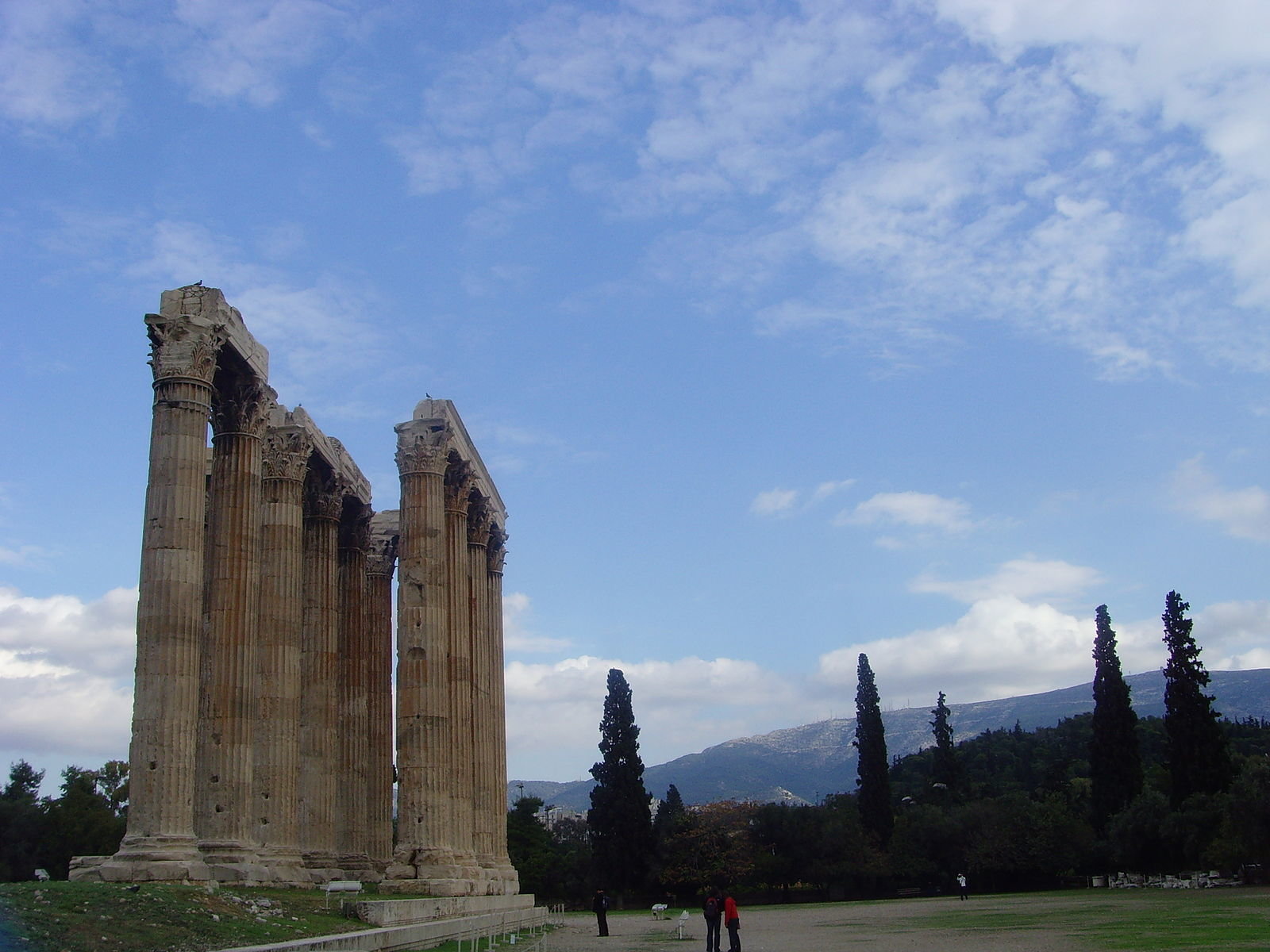 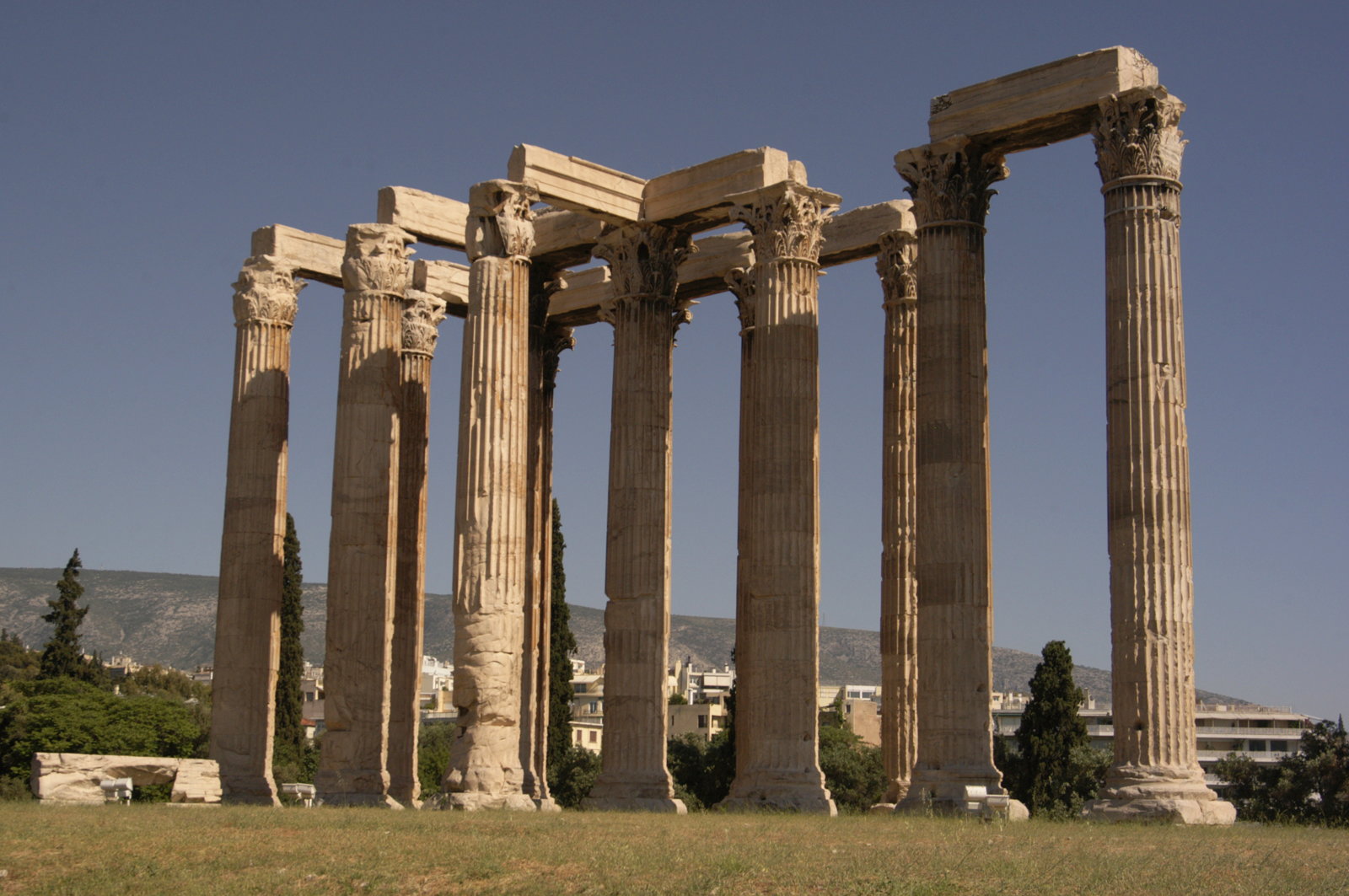 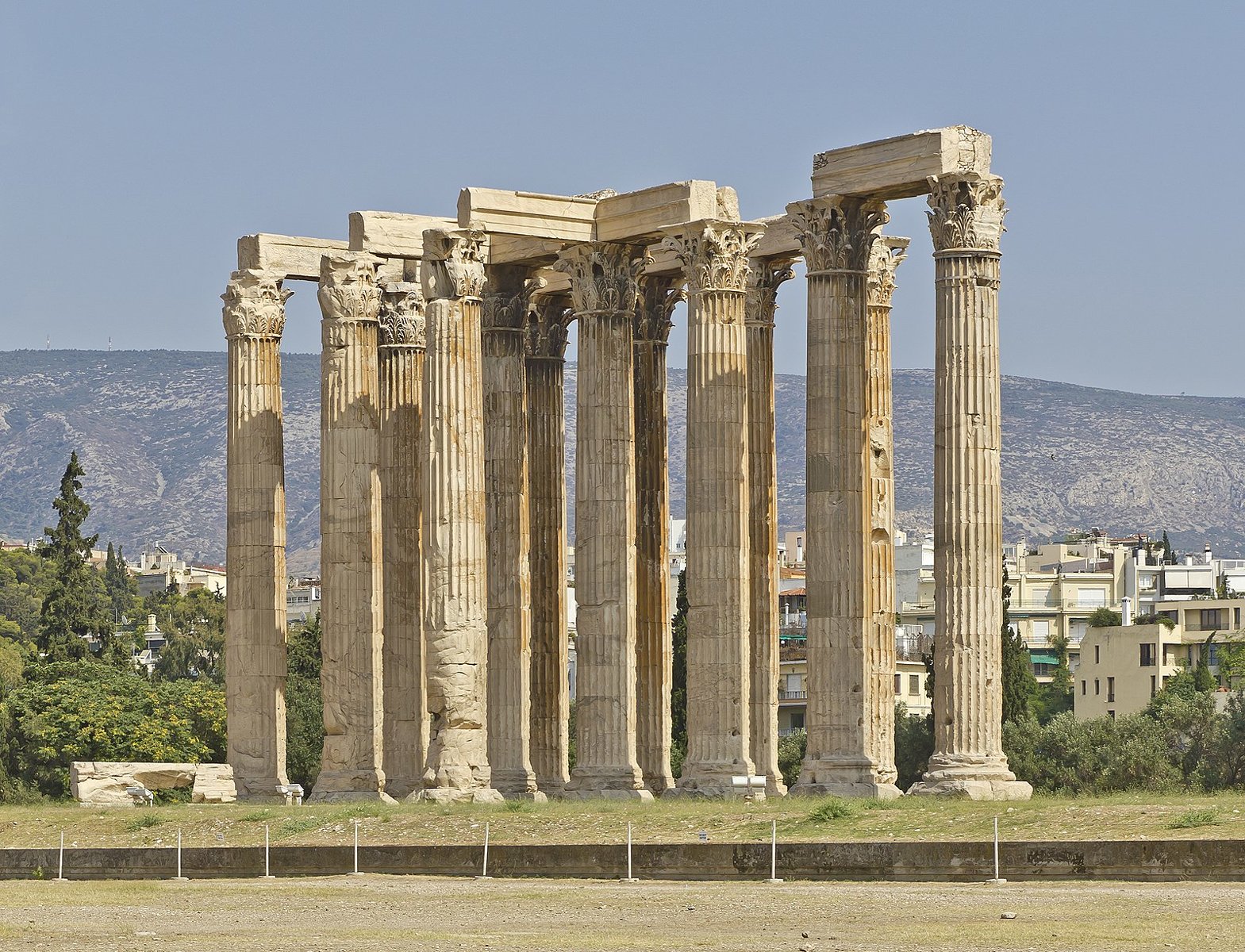 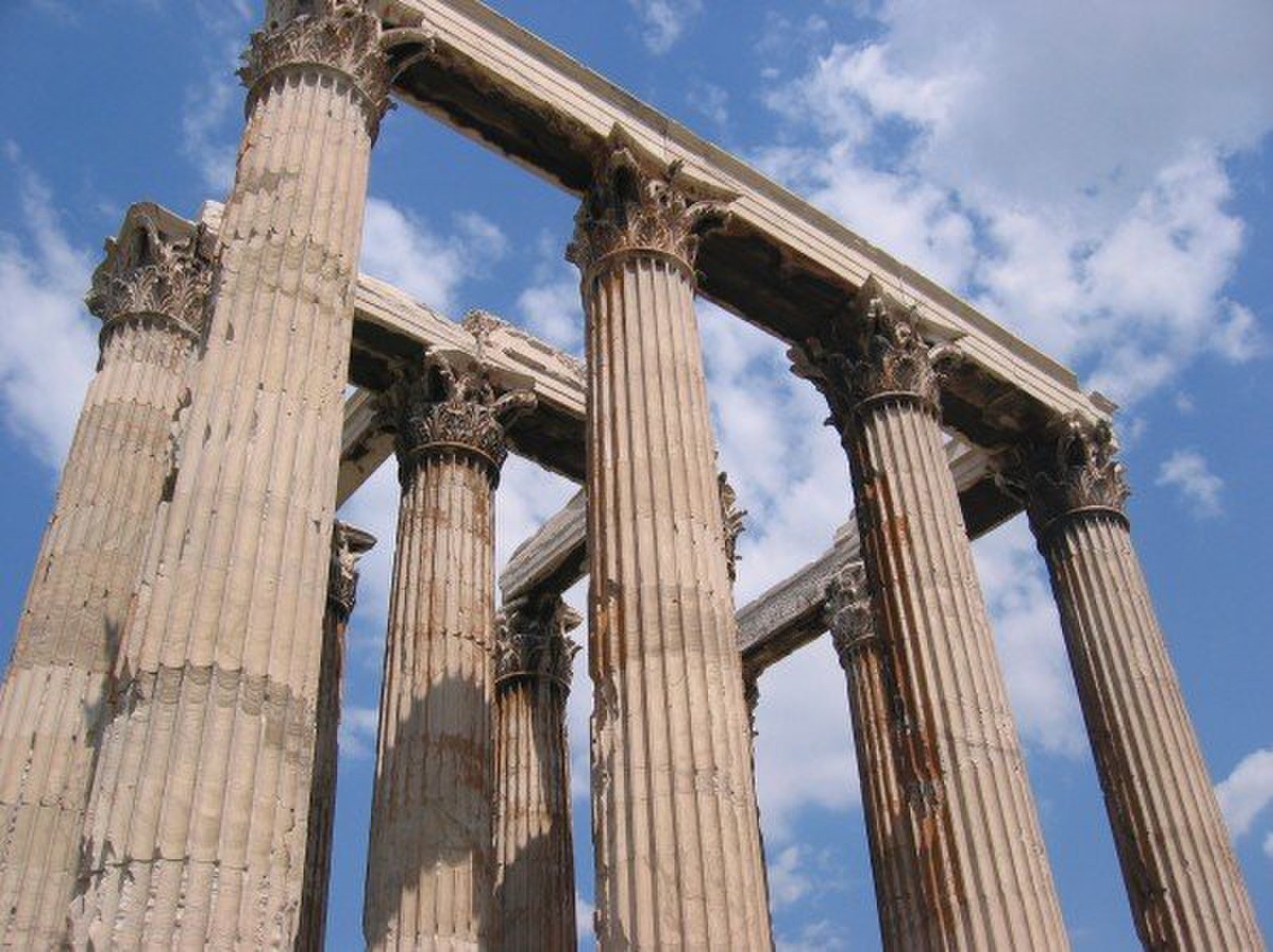 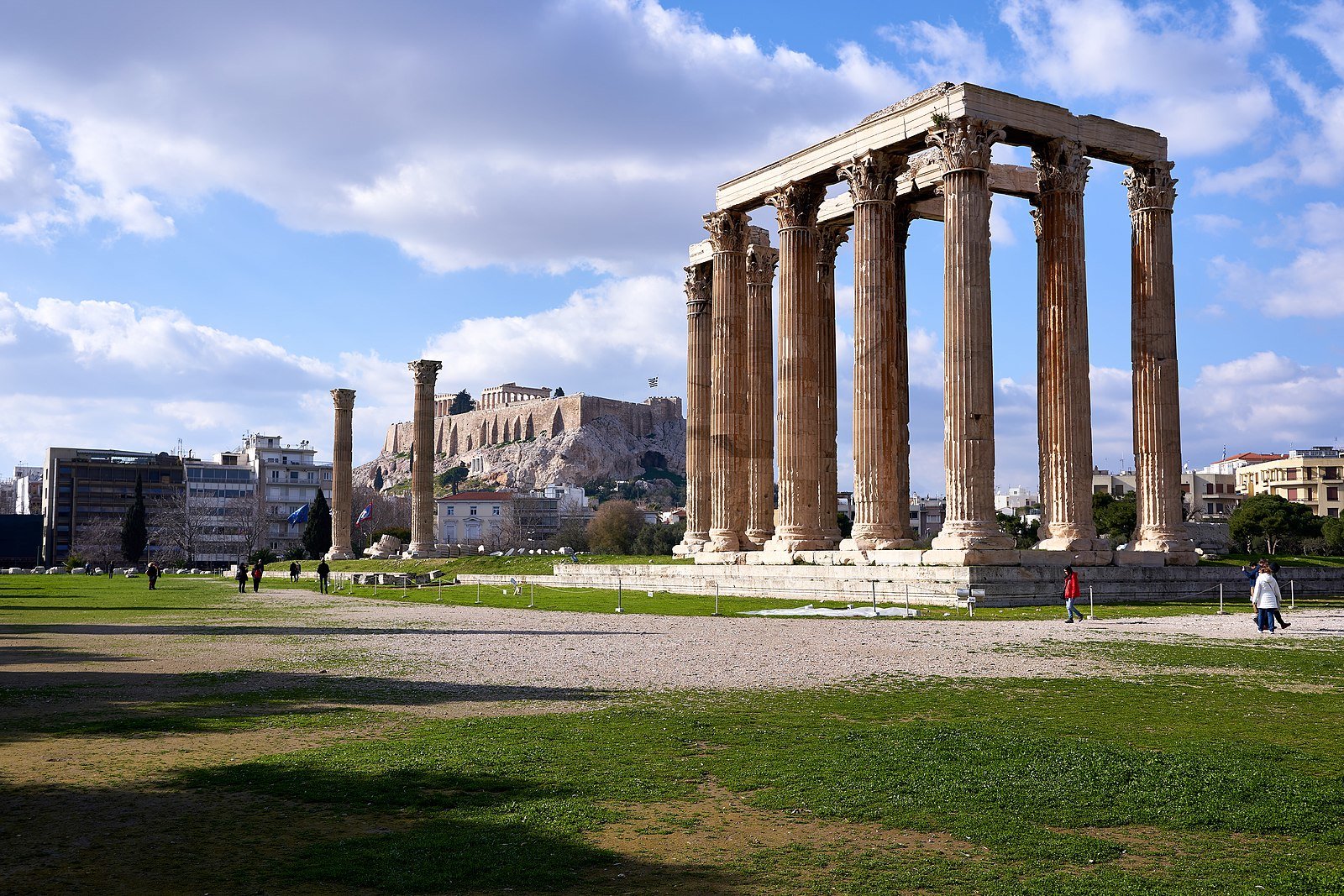 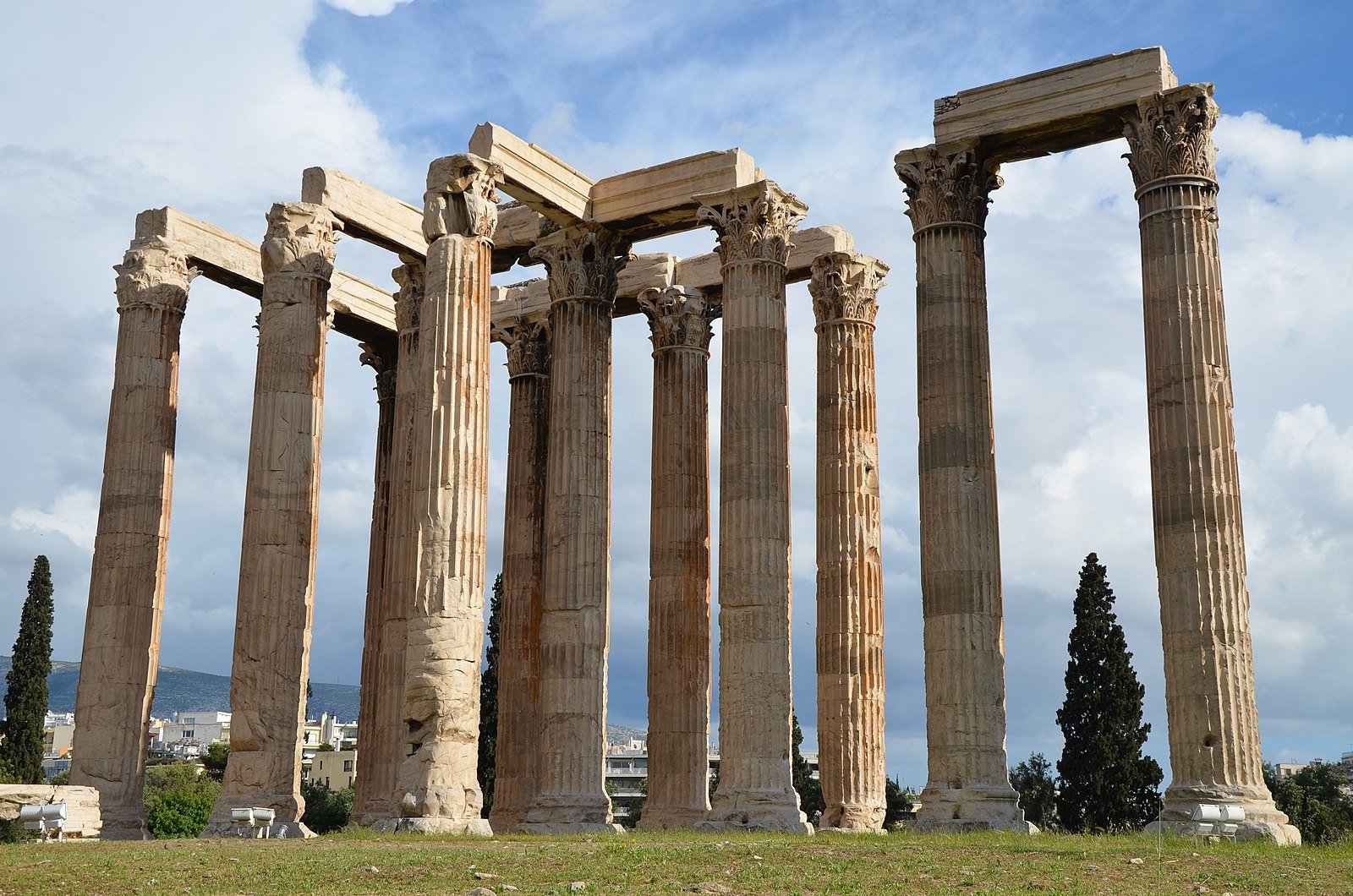 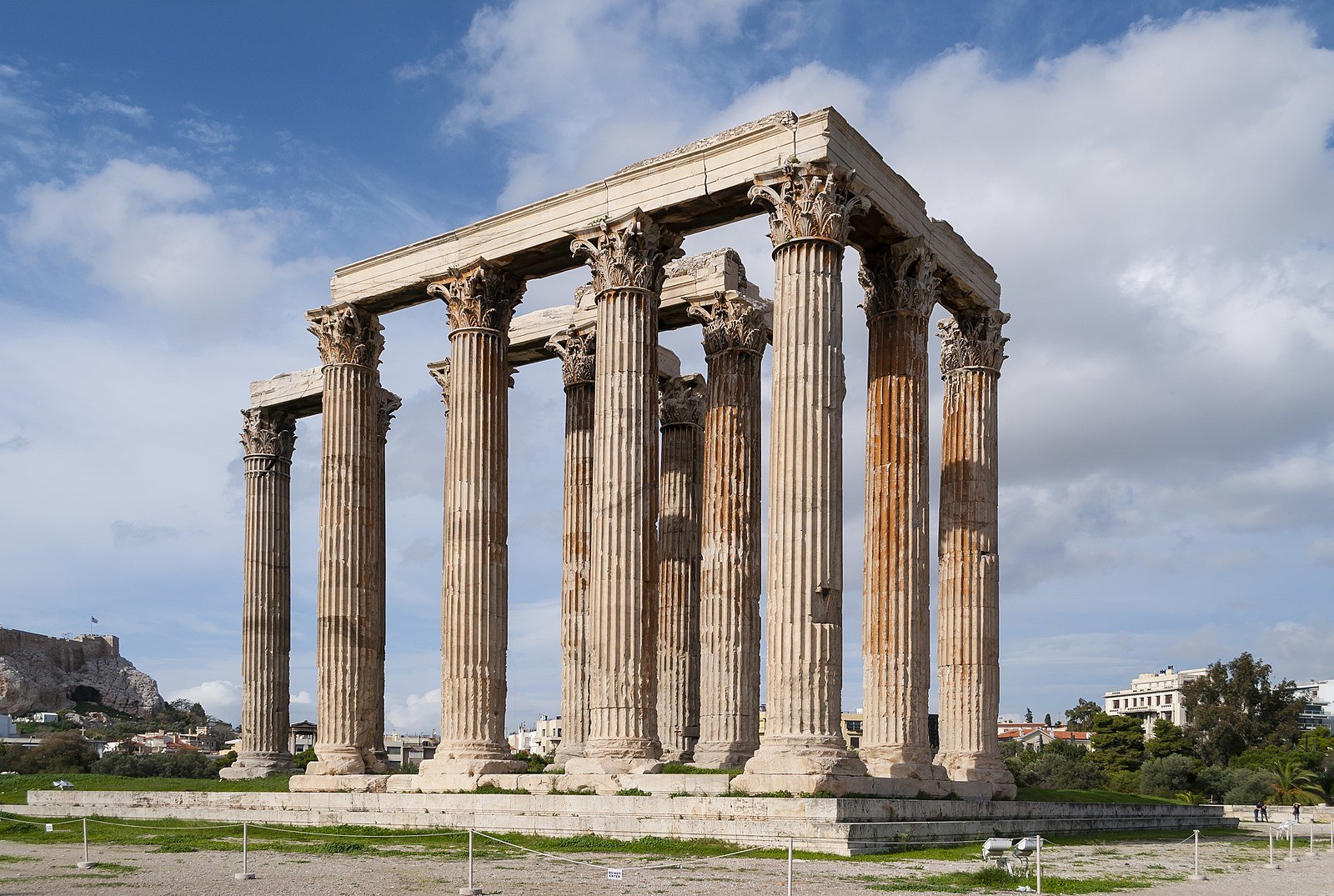 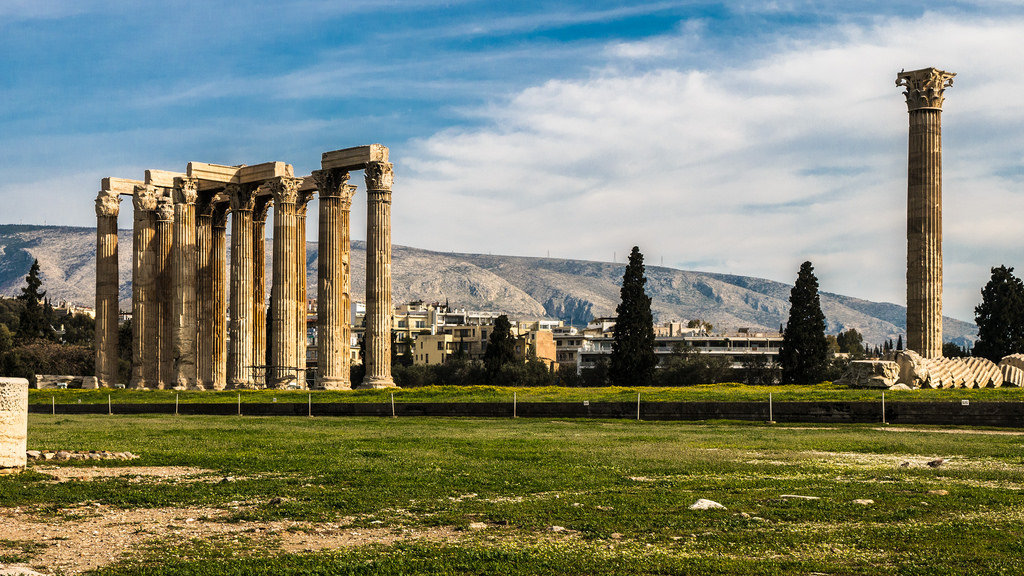 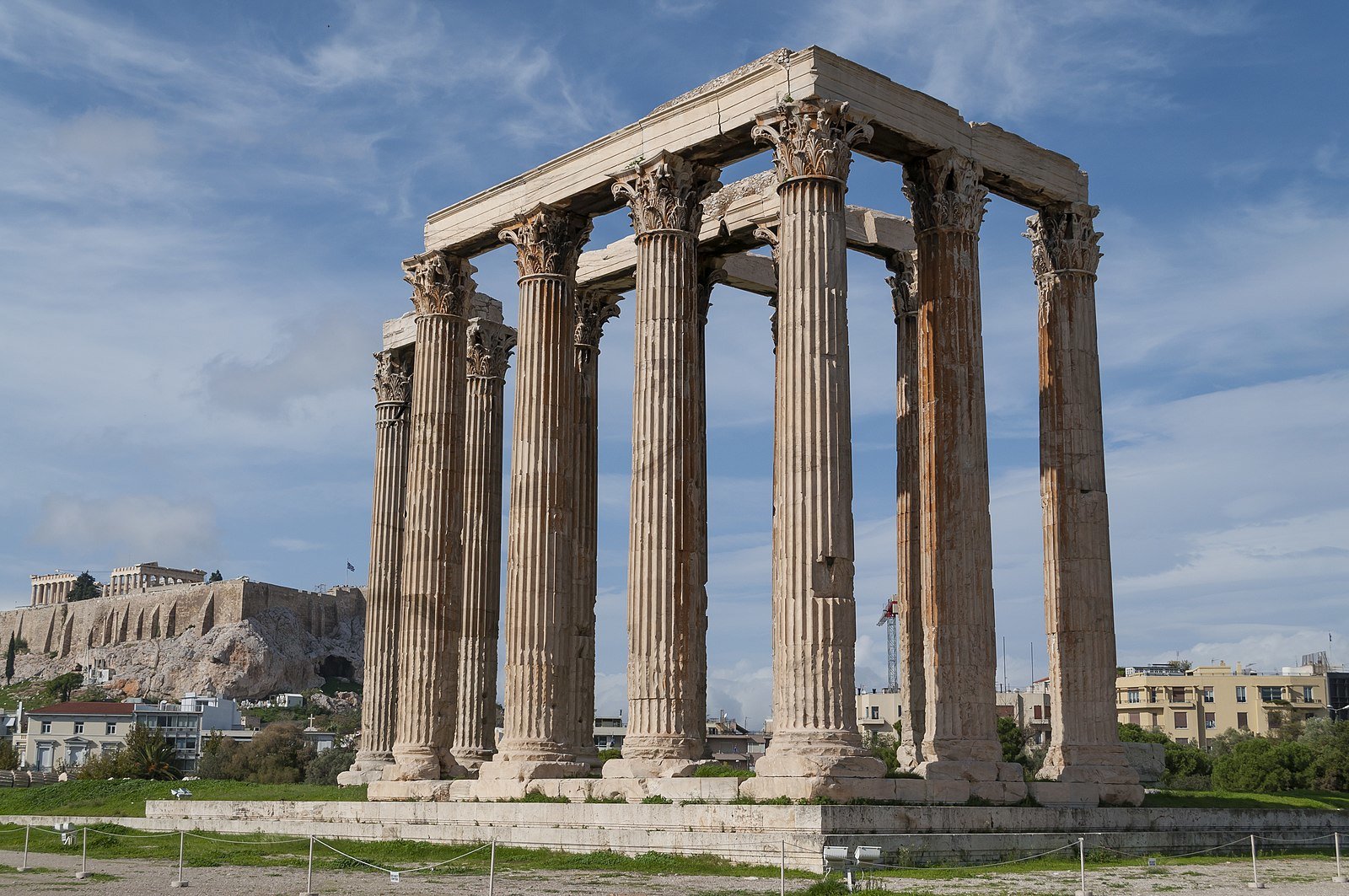