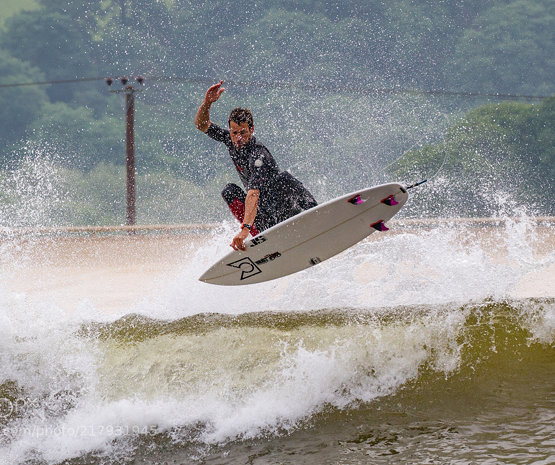 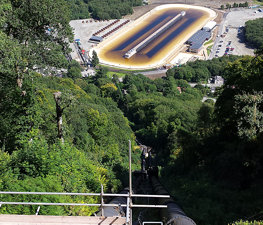 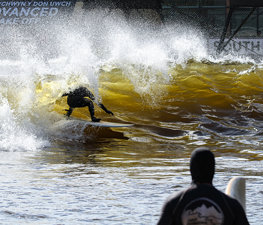 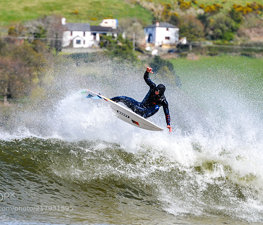 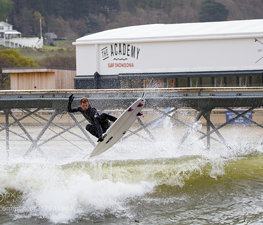 In 2007 Dolgarrog Aluminium closed, and a group was established to decide what should be on the site in its place. The following year the site was purchased by Ainscough Johnston, a Lancashire-based strategic land company, whose initial plans were for housing – including affordable housing – and for leisure and amenity uses.

Plans for a surfing attraction were unveiled in 2013, with Conwy Adventure Leisure announcing that it was submitting a planning application to create the venue. The company predicted the facility would "attract 67–70,000 visitors [a year]". Conwy Adventure Leisure received planning permission in August 2013 and in December said it had invested over £7 million in the project. The park gained final approval from councillors in April 2014, with construction beginning in May. In June the project received £4 million in funding from the Welsh Government. Much initial decontamination work had to be undertaken, following a century of use as an industrial site, and over 25,000 cubic metres of on-site material was crushed and re-used during the construction, including the recycling of 400 tonnes of steel, cast iron and copper.

Development of the site was also complicated by the fact that it is adjacent to a Site of Special Scientific Interest, there is a high water table, and it is located on the flood plain of the River Conwy. A total of 6.3 miles of piling was driven into the ground in order to stabilize it.

In April 2015 a fire broke out on the construction site, causing some damage to a tower. The site opened to the public on 1 August 2015, having cost a total of £12 million. It served 14,000 people in its first two weeks of operation, including 3,500 people who surfed in the pool.

Surf Snowdonia has a freshwater pool which contains a wave-generation mechanism, manufactured by the Leitner Group, and based on a prototype built in San Sebastián, Spain, by the Spanish company Wavegarden. It has a contoured base that can generate three different sized waves, at a rate of one a minute. The pool can generate a 2-metre (6 ft 7 in) high wave which can last 16 seconds and travel 150 metres (490 ft). The company claims this is the longest man-made surf wave in the world. The pool is filled with rainwater collected from Snowdonia reservoirs including Llyn Cowlyd. This water passes through the adjacent hydro-power station, originally built to power the former aluminium plant, before being pumped from the tail-race into the surfing pool.

The pool is 300 metres (980 ft) long and 110 metres (360 ft) wide, containing a total of six million gallons of water. A bi-directional snowplough-shaped wave-generation mechanism, towed on a cable between the two central towers, moves up and down the pool on a three-rail track, generating the waves. The underwater machinery, powered by a 2MW motor, is covered with a protective stainless steel netted screen, to keep surfers from any moving parts, yet without impairing the energy of the waves. The water in the pool is cleaned and cycled every 24 hours by passing through ultraviolet cleaners, so that the water can be chlorine-free.

The wave pool can be used by as many as 52 surfers at one time.

The Managing Director of Conwy Adventure Leisure Ltd. (i.e. Surf Snowdonia) during its constructions and initial opening phase was Steve Davies MBE, who previously worked as Director of the National Railway Museum in York from 2010 - 2012; he stepped down when offered the post of Managing Director at Surf Snowdonia. Prior to that he was director of the Museum Of Science And Industry in Manchester from 2008 - 2010, following a career in the army, where he rose to the rank of Colonel, and was Army Chief of Staff Headquarters 2nd Division.

From an initial estimate of a staff of 60, Surf Snowdonia currently employs some 109 people. This includes 13 from Dolgarrog itself and "many more from towns and villages in Conwy county". Some surfing professionals were recruited from overseas. The restaurant and bar employ 48 staff, most of whom live in the Conwy Valley.

In addition to the surf pool, other facilities on site include a surfing academy training school, a Crash and Splash lagoon, a café bar and coffee shop, a soft play shack for children, a retail area, and accommodation in 36 wooden camping pods, capable of catering for up to 144 people. All the facilities are also open to non-surfing visitors.

In the first week of opening, the centre received up to 1,000 visitors a day. In its first season, prior to winter closure in 2015, the surf lagoon was booked at an average of 97% occupancy.

Reaction to the facility from professional surfers has been favourable -

"I swear this was a dream for every surfer 10 years ago and now it’s finally here. It’s the future of surfing; well for the sport of surfing, anyway. The waves are really high performance." (Jack Freestone, Australia)

"I wish I could surf it all day. It is interesting, especially the setting." (Luke Davies, Australia)

"It is a different environment to the beach which is a little trippy." (Alan Stokes, UK)

"It is a little trickier to surf [than the sea] but it is a fun wave." (Marc Lacomare, France)

On 18-19 September 2015, Surf Snowdonia hosted Red Bull Unleashed, the world's first stadium surf contest, with 24 surfers from around the world. The event, watched by 2,000 spectators on the final day, was won by Hawaiian surfer Albee Layer, who beat New Zealander Billy Stairmand in the final.

The UK Pro Surf Tour will be returning to Surf Snowdonia on 22 October 2017.

At the rear of the site, on land owned by Surf Snowdonia, is a small length of track, home to the Dolgarrog Railway Society. This was established when the aluminum works was still running, the track being leased to the society. A large stack of rail - remaining from when the track to Dolgarrog Bridge and Dolgarrog station (over the river) was lifted in 1964 - still exists on site, and the aim is to relay track over much of the old trackbed.

Surf Snowdonia on Easter Sunday. Strange idea of surfing. No paddle out, no hassling for waves, alwa — mtx @ Flickr

David Bell
Great fun for all skill levels, book in early for lessons though or you might miss out

The Fairy Falls (Welsh: Rhaeadr y Tylwyth Teg) is a waterfall in the

Gwydir Castle is situated in the Conwy valley, North Wales, a mile to

Conwy's town walls are a medieval defensive structure around the town

Mavericks is a surfing location in northern California about 2 miles

Kahaluʻu Bay (; Hawaiian pronunciation: ]) is a historic district a

Sirius Sport Resort is a tourist attraction, one of the Surfing 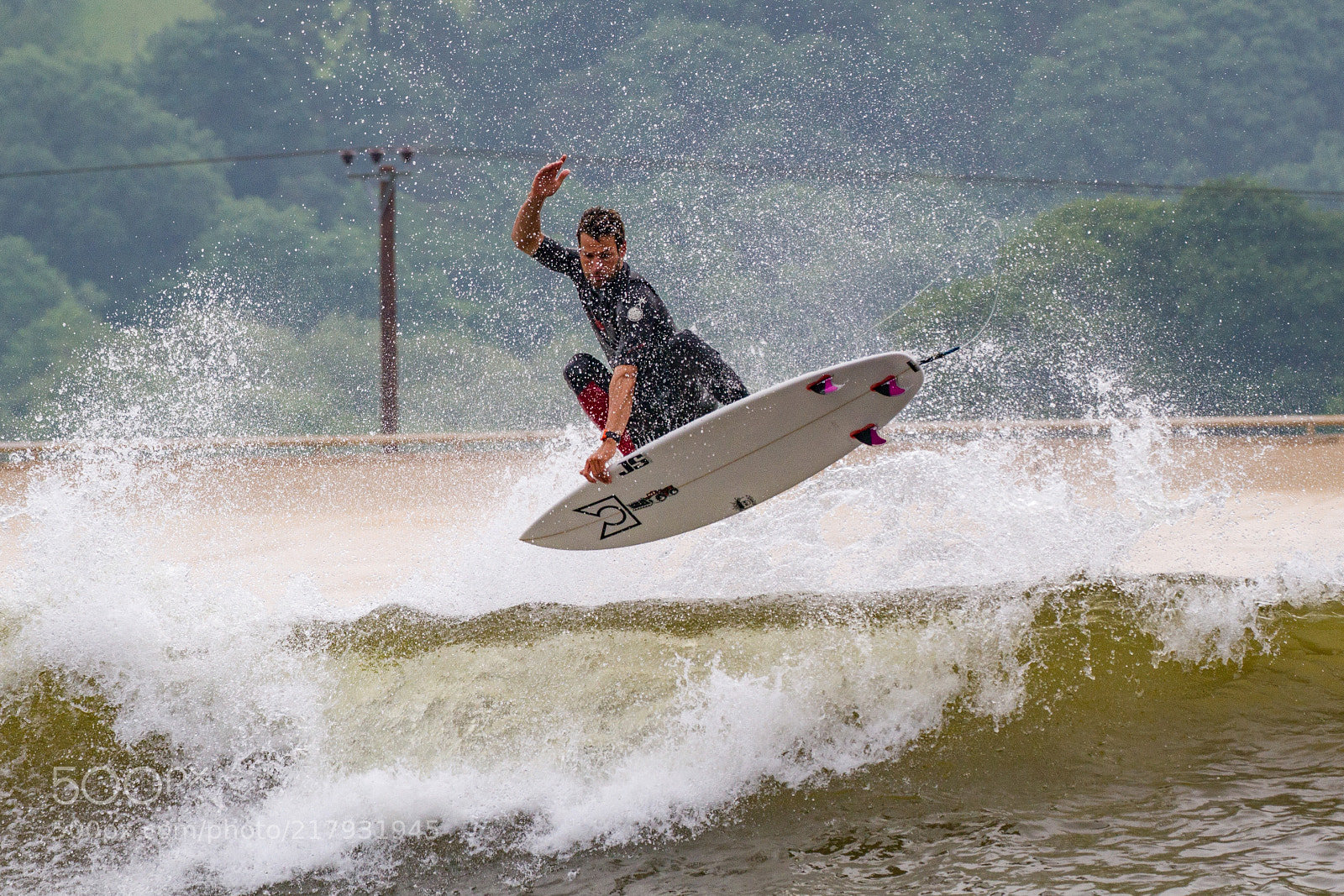 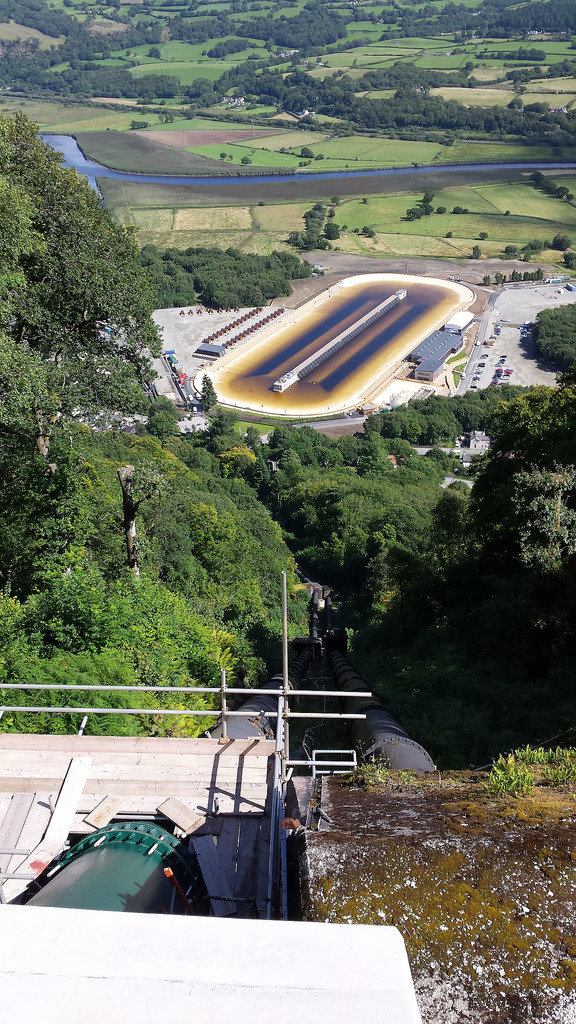 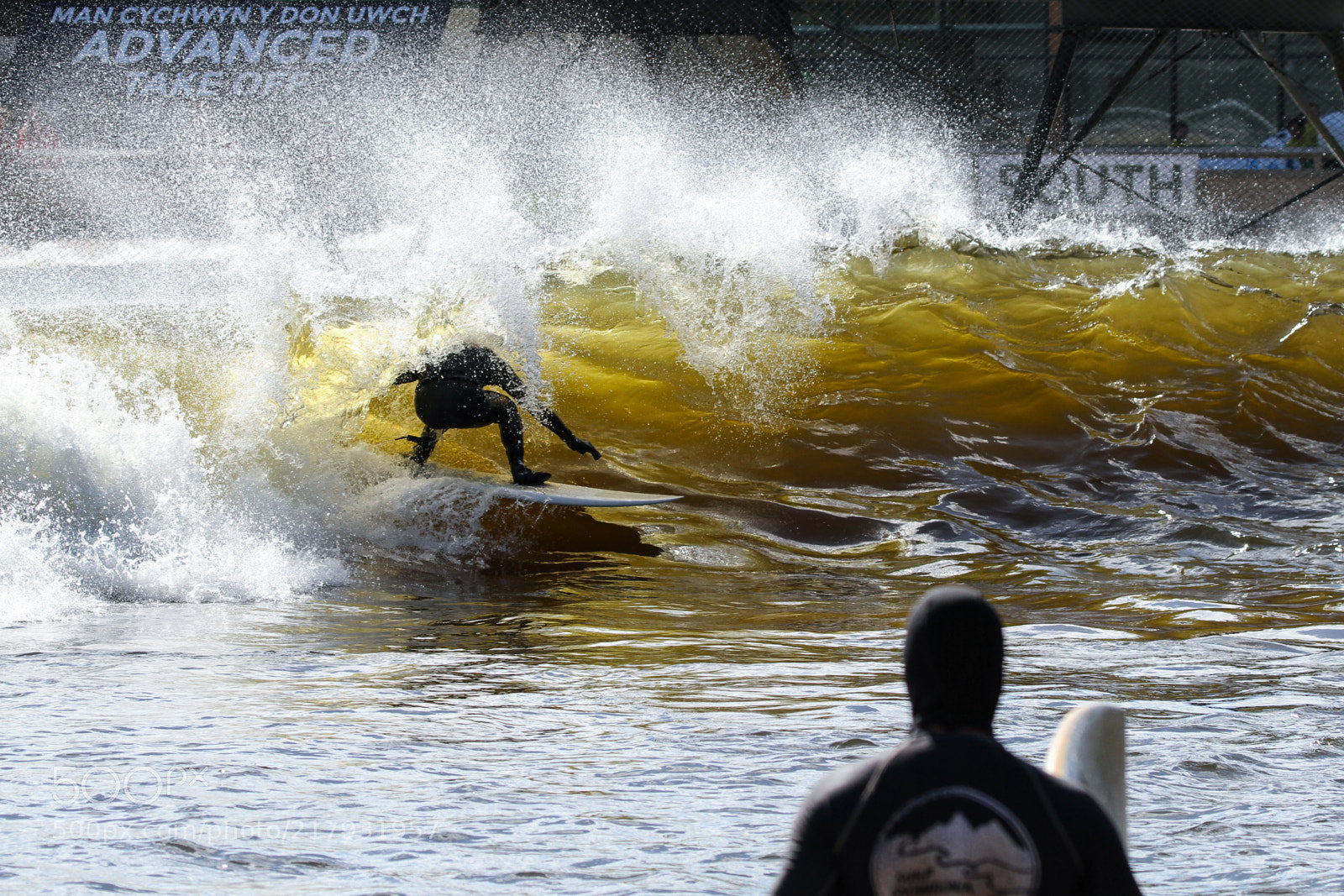 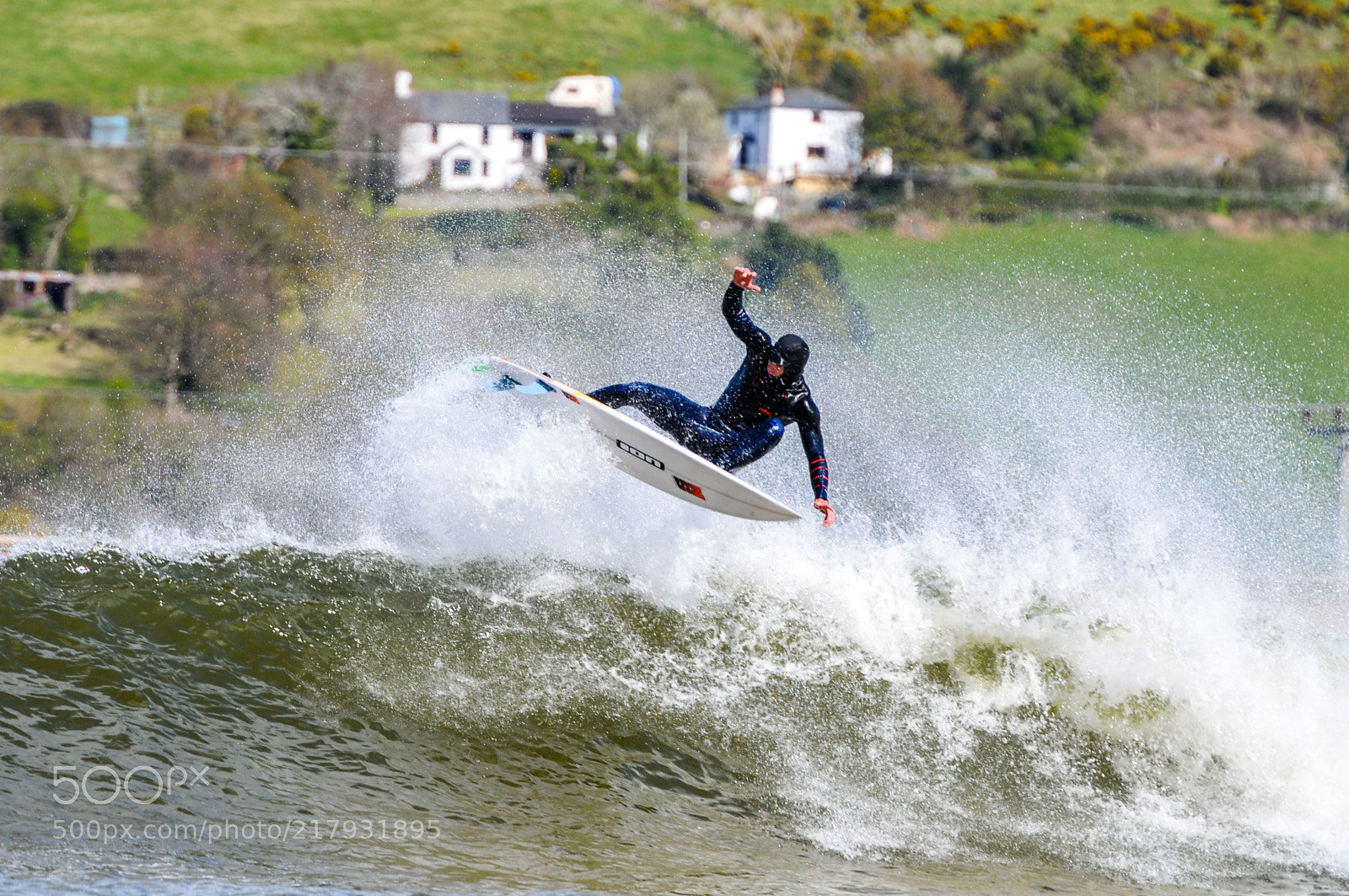 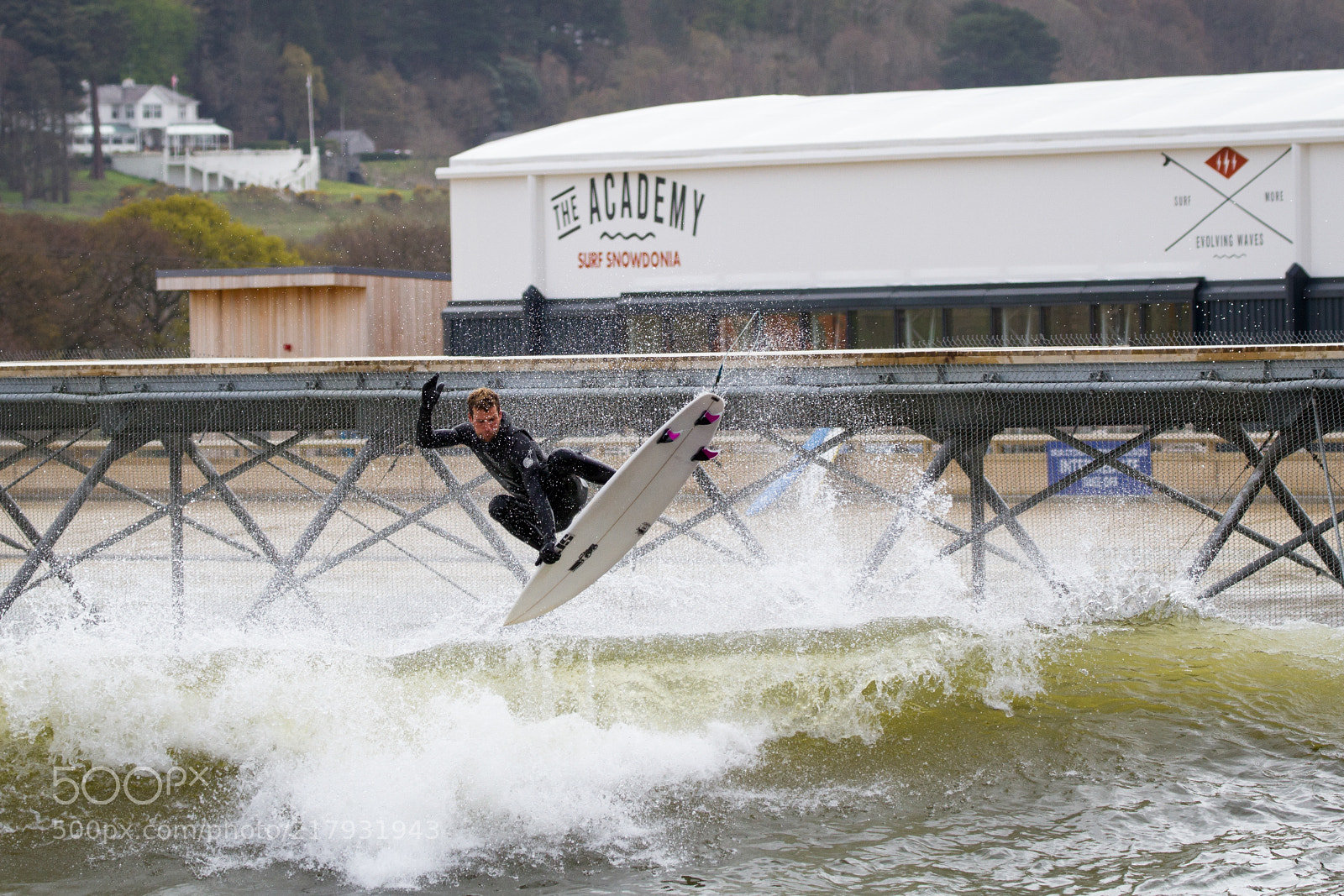 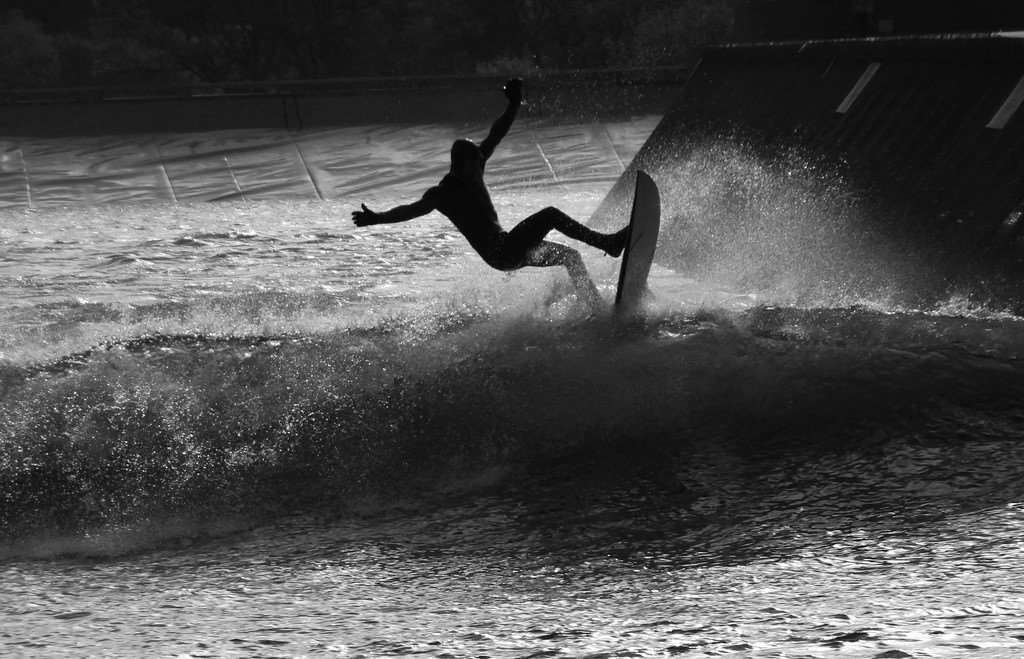 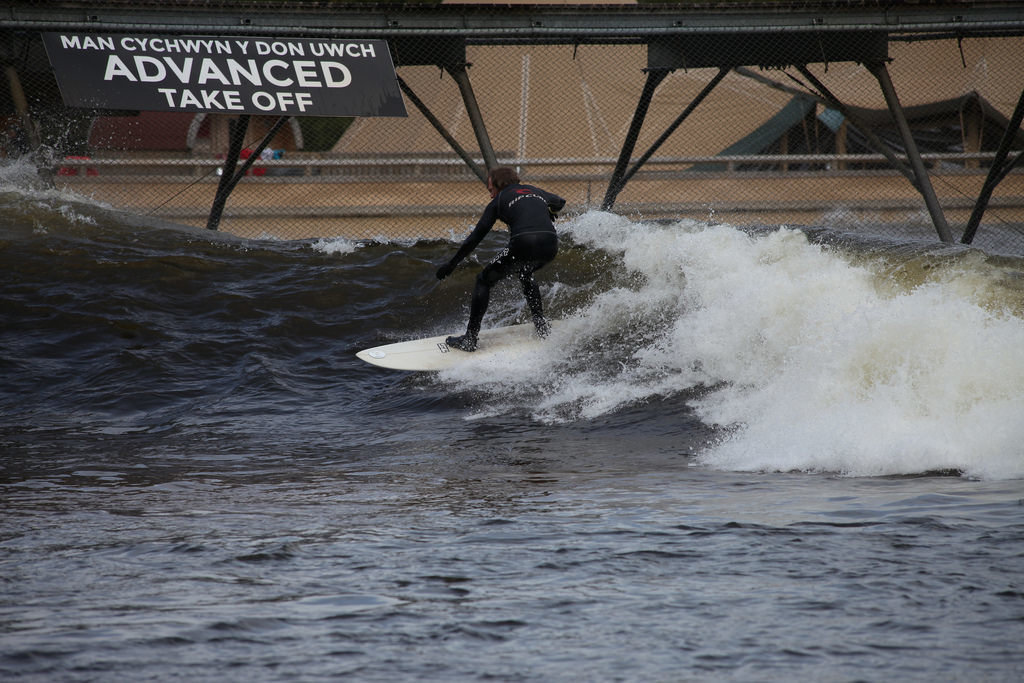 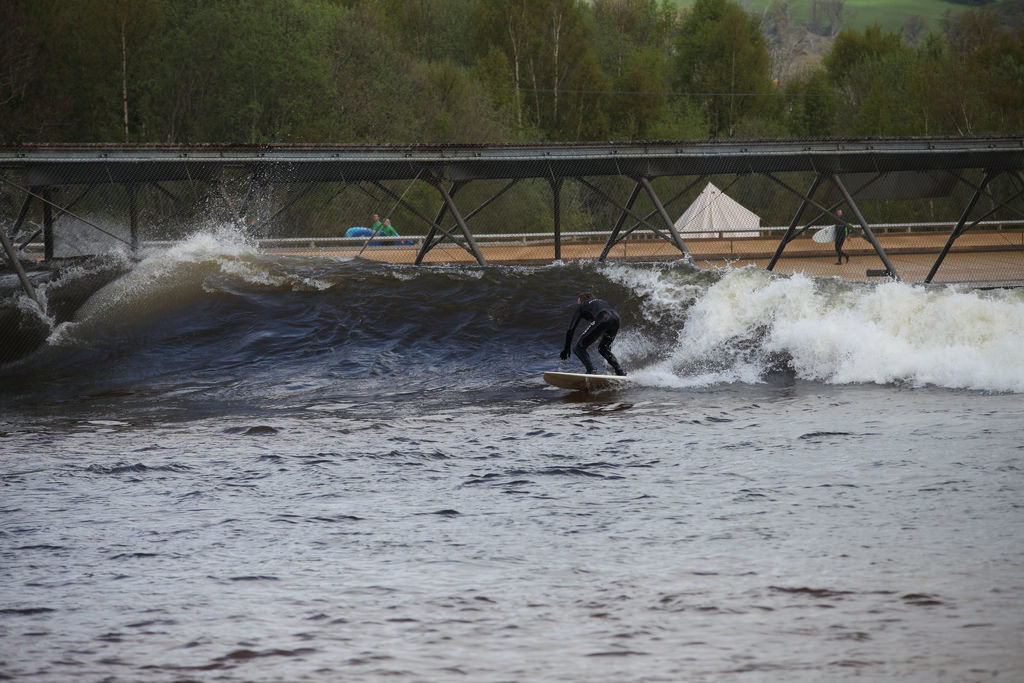 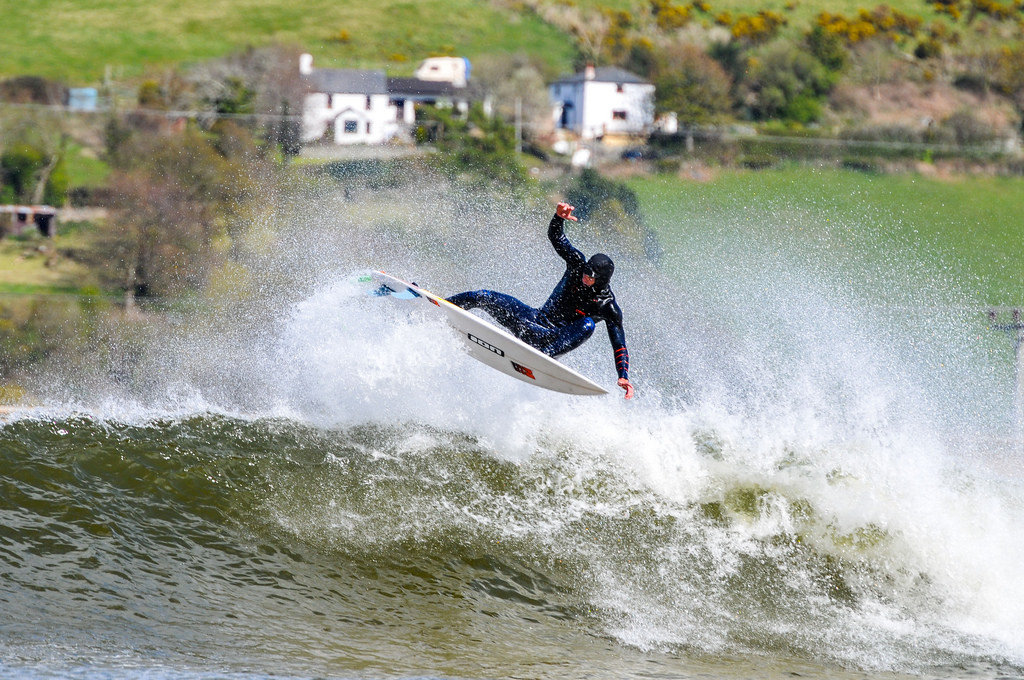 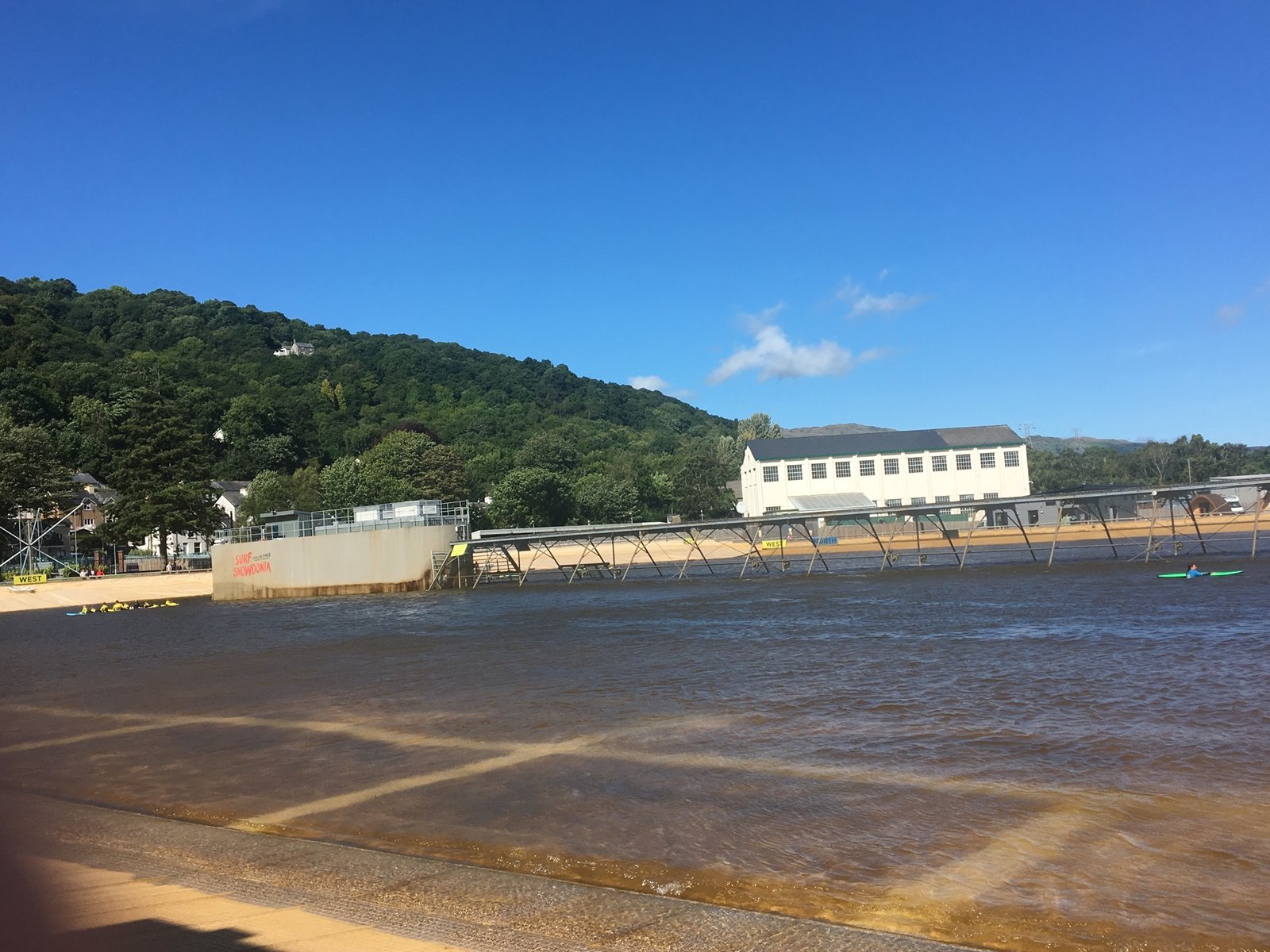 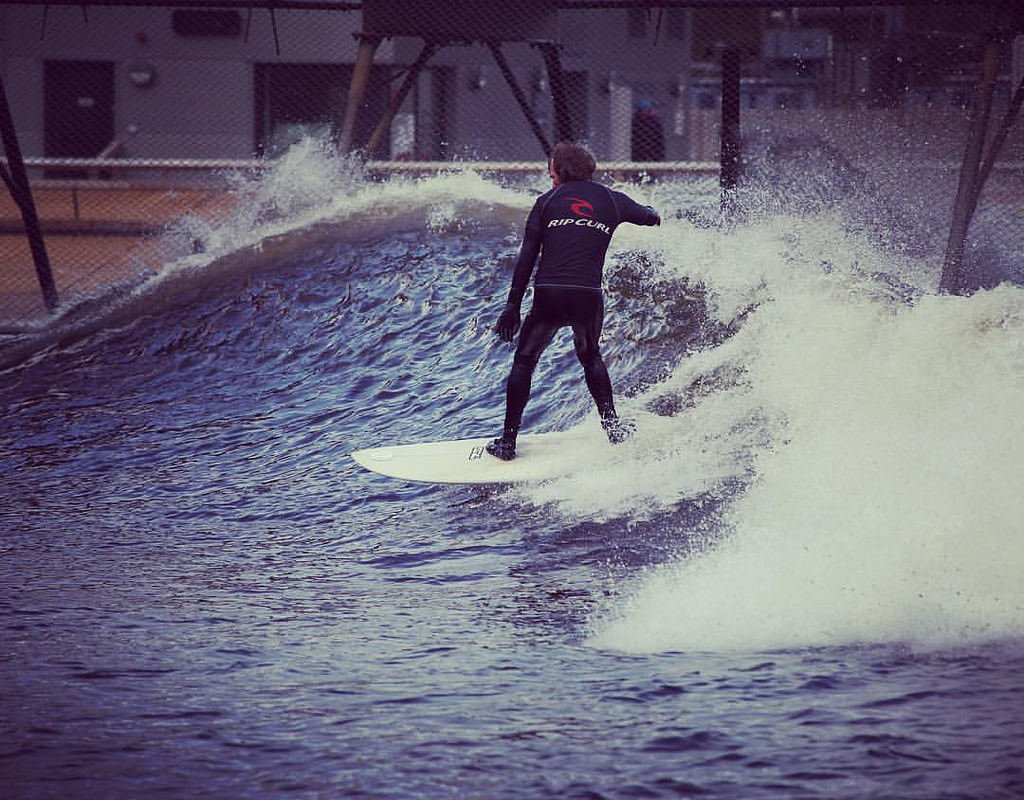 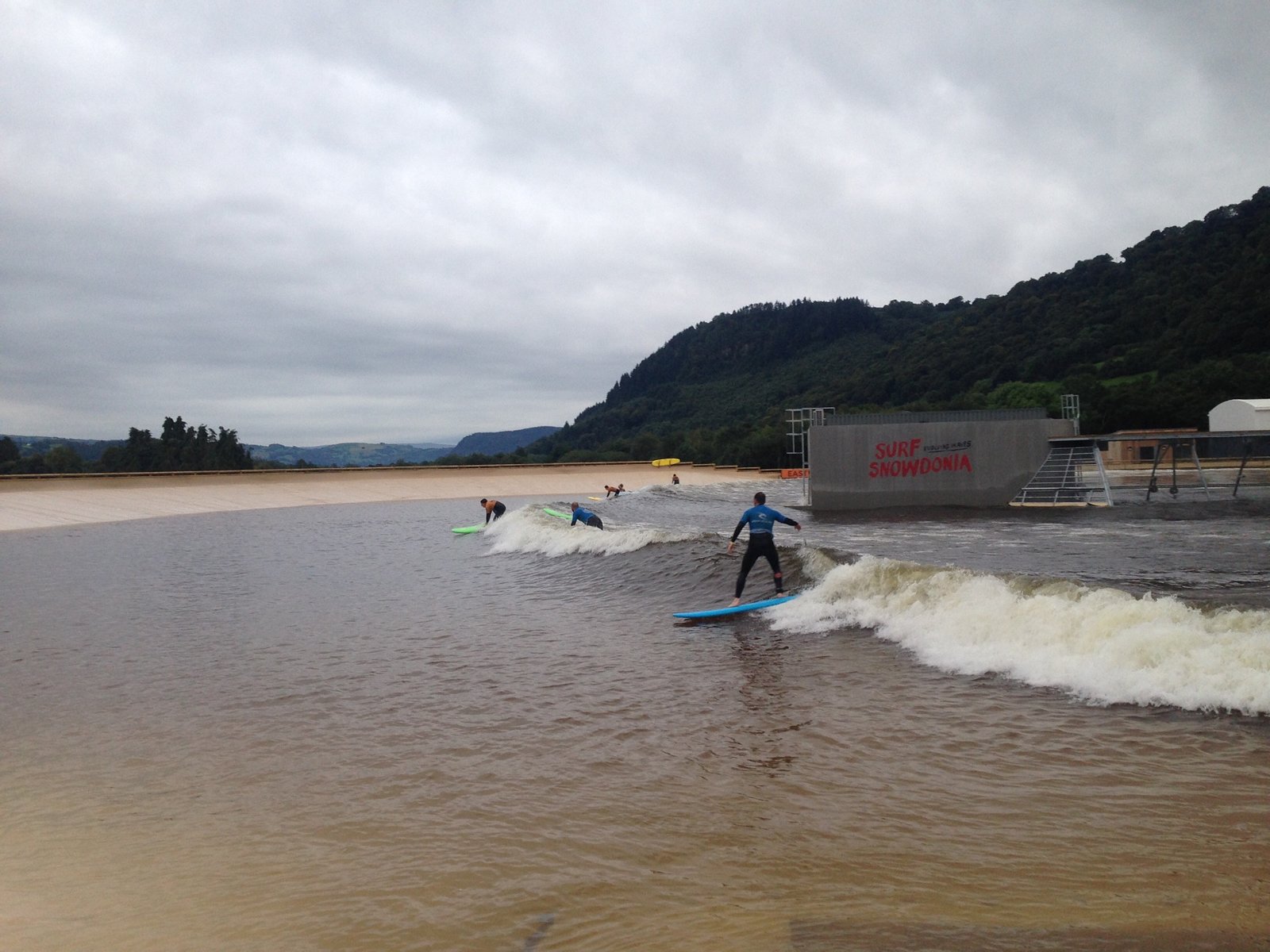 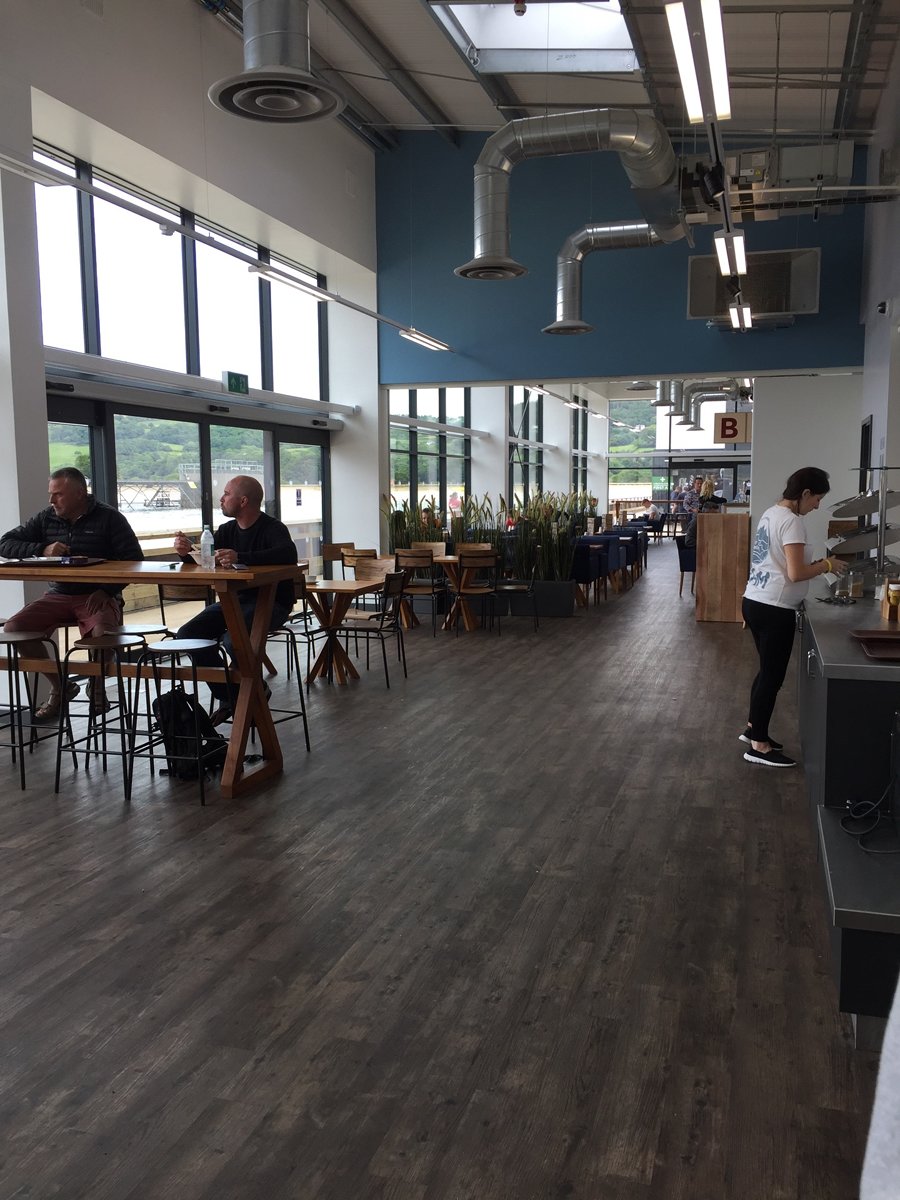