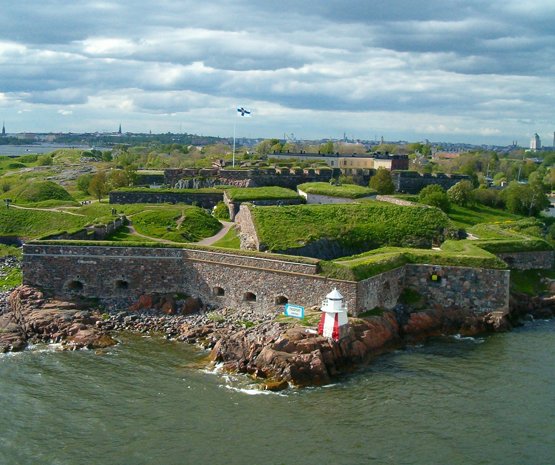 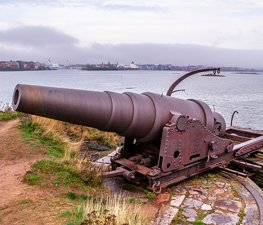 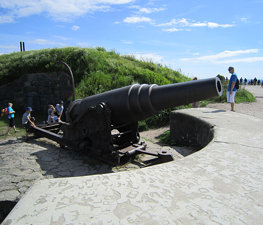 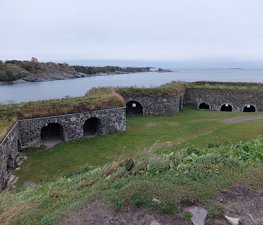 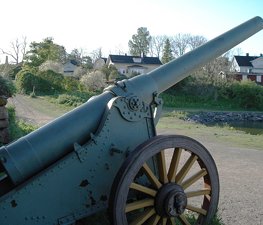 Suomenlinna, until 1918 Viapori, (Finnish), or Sveaborg (Swedish), is an inhabited sea fortress built on six islands (Kustaanmiekka, Susisaari, Iso-Mustasaari, Pikku-Mustasaari, Länsi-Mustasaari and Långören), and which is nowadays part of Helsinki, the capital of Finland.

Suomenlinna is a UNESCO World Heritage site and popular with both tourists and locals, who enjoy it as a picturesque picnic site. Originally named Sveaborg (Fortress of Svea), or Viapori as called by Finns, it was renamed Suomenlinna (Castle of Finland) in 1918 for patriotic and nationalistic reasons, though it is still also sometimes known by its original name.

The Swedish crown commenced the construction of the fortress in 1748 as protection against Russian expansionism. The general responsibility for the fortification work was given to Augustin Ehrensvärd. The original plan of the bastion fortress was strongly influenced by the ideas of Vauban, the foremost military engineer of the time, and the principles of Star Fort style of fortification, albeit adapted to a group of rocky islands.

In addition to the island fortress itself, seafacing fortifications on the mainland would ensure that an enemy would not acquire a beach-head from which to stage attacks. The plan was also to stock munitions for the whole Finnish contingent of the Swedish Army and Royal Swedish Navy there. In the Finnish War the fortress surrendered to Russia on May 3 1808, paving the way for the occupation of Finland by Russian forces in 1809.

Sweden started building the fortress in 1748, when Finland was still a part of the Swedish kingdom. Augustin Ehrensvärd (1710–1772) and his gigantic fortification work on the islands off the town of Helsinki brought the district a new and unexpected importance.

In 1703 Peter the Great had founded his new capital, Saint Petersburg, in the furthest-flung corner of the Gulf of Finland. In the approach to it he built the fortified naval base of Kronstadt. Russia soon became a maritime power and a force to be reckoned with in the Baltic Sea.

The situation posed a threat to Sweden, which until that time had been the dominant power in the Baltic. Russian naval units made skirmishes right up to the Swedish coast. Other European states were also concerned about developments, especially France, with which Sweden had concluded a military alliance. After lengthy debate the Swedish parliament decided in 1747 to fortify the Russian frontier and to establish a naval base at Helsinki as a counter to Kronstadt. The frontier fortifications were established at Loviisa (Lovisa).

The fortification of Helsinki and its islands began in January 1748, when Augustin Ehrensvärd, as a young lieutenant colonel, came to direct the operations. A number of fortifications were also built on the Russian side of the new border during the 18th century and some of the existing Swedish ones were added to.

There were two main aspects to Ehrensvärd's design for the fortress: a series of independent fortificatons on each of the linked islands and, at the very heart of the complex, a dockyard for the navy fleet. Initially the soldiers were housed in the vaults of the fortifications, while the officers had specially built quarters integrated into the baroque cityscape composition of the overall plan. The most ambitious plan was left only half complete, a baroque square on Iso Mustassari partly based on the model of Place Vendôme in Paris. As the construction work progressed, more residential buildings were built, many following the shape of the fortification lines. Ehrensvärd and some of the other officers were keen artists and painted oil paintings presenting a view of life in the fortress duing its construction, and giving the impression of a lively "fortress town" community.

Following a pact between Alexander I and Napoleon, Russia launched a campaign against Sweden and occupied Finland in 1808. By the Treaty of Fredrikshamn in 1809 Finland was ceded from Sweden and became an autonomous grand duchy within the Russian Empire. The Swedish period in Finnish history, which had lasted some seven centuries, came to an end.

Sveaborg did not take part in the 1808 war until the very end. The Russians easily took Helsinki in early 1808 and began bombarding the fortress. Its commander, Carl Olof Cronstedt, negotiated a cease-fire, and when no Swedish reinforcements had arrived by May, Sveaborg, with almost 7,000 men, surrendered. The reasons for Cronstedt's actions remain somewhat unclear; but the hopeless situation, psychological warfare by the Russians, some (possibly) bribed advisors, fear for the lives of a large civilian population, lack of gun-powder, combined with their physical isolation, are some likely causes for the surrender.

After taking over the fortress the Russians set about on an extensive building program, mostly extra barracks, but also extending the dockyard and reinforcing to the fortification lines. The long period of peace following the transfer of power was shattered by the Crimean War of 1853–56. The allies decided to engage Russia on two fronts and sent an Anglo-French fleet to the Baltic Sea. For two summers the fleet shelled the towns and fortifications along the Finnish coast. Bombardment of Suomenlinna (then known as Sveaborg or Viapori) lasted 47 hours and the fortress was badly damaged. However, they were unable to knock out the Russian guns, and after the bombardment the Anglo-French fleet sent no troops ashore, but intead set sail for Kronstad.

After the Crimean War extensive restoration work was begun at Suomenlinna. A new ring of earthworks with artillery emplacements was built at the western and southern edges of the islands.

The next stage in the arming of Suomenlinna and the Gulf of Finland came in the build-up to World War I. The fortress and its surrounding islands became part of "Peter the Great's naval fortification" designed to safeguard the capital, Saint Petersburg.

The fortress became part of an independent Finland in 1917, following the Russian Revolution. After the Finnish Civil War, a prison camp existed on the island.

passing through the Kustaanmiekka strait after leaving Helsinki for Stockholm]] No longer very practical as a military base, Suomenlinna was turned over to civilian administration in 1973. An independent government department (The Governing Body of Suomenlinna) was formed to administer the unique complex. At the time there was some debate over its Finnish name, with some suggesting that the old name Viapori be restored, but the newer name was retained. The presence of the military on the islands has been drastically scaled down in recent decades. The Suomenlinna garrison houses the Naval Academy (suomi. Merisotakoulu) of the Finnish Navy. Suomenlinna also still flies the war flag, or the swallow-tailed state flag of Finland. The island of Pikku Mustasaari, where the Academy is located, is still a mostly closed military area.

Suomenlinna is now one of the most popular tourist attractions in Helsinki as well as a popular picnicking spot for the city's inhabitants, and on a sunny summer day the islands, and in particular the ferries, can get quite crowded. A number of museums exist on the island, as well as the last surviving Finnish submarine Vesikko.

Suomenlinna has always been much more than just a part of Helsinki — it is a town within the town. Nowadays there are about 900 permanent inhabitants on the islands, and 350 people work there all year round. This is one of the features that makes Suomenlinna unique: the fortress is not simply a museum, but a living community.

There is a minimum-security penal labor colony (suomi. työsiirtola) in Suomenlinna, whose inmates work on the maintenance and reconstruction of the fortifications. Only volunteer inmates who pledge non-use of controlled substances are accepted to the labour colony.

For the general public, Suomenlinna is served by ferries all year around, but a service tunnel supplying heating, water and electricity was built in 1982. From the beginning of 1990s, the tunnel was modified so that it can also be used for emergency transports.

Suomenlinna has been known as an avant-garde location for culture. In the mid-1980s the Nordic Arts Centre was established on the island. Several buildings have been converted into artists' studios, which are let by the administration at reasonable rates. During the summer there is an art school for children. The performances of the Suomenlinna summer theatre regularly draw full houses.

The Suomenlinna district of Helsinki consists of eight islands. Five of the islands; Kustaanmiekka (which has the greatest concentration of fortifications), Pikku Mustasaari, Iso Mustasaari, Länsi-Mustasaari and Susisaari are connected by either bridges or sandbars. The unconnected islands are Särkkä, Lonna and Pormestarinluodot.

Instead of the normal Finnish postal addressing scheme (consisting of a street name and house number), the addresses consist of letter code for island and then a house number. For example, C 83 is house #83 in Iso-Mustasaari (code C). The postal code for the Suomenlinna district is 00190.

can be seen at the far right.]]

George R. R. Martin wrote a short story about the surrender of Viapori, The Fortress, when he was a college student. It was published in his 2007 volume of short stories, Dreamsongs.

Шаблон:Reflist The Suomenlinna Kuninkaanportti ("King's gate") entrance gateway, bearing a plaque with Augustin Ehrensvärd's famous quote "Eftervärld, stå här på egen botn och lita icke på främmande hielp" ("Progeny, stand here on your own foundation and do not rely on foreign help"), was Erik Bruun's illustration motive for the 1000 Finn mark banknote. However, it is not actually possible to see the gate exactly as it appears on the banknote. Bruun stylised the illustration a little to better show off the famous gate.

Bommy Cha
Take a ferry and spend a few hours on this historical fortress island. Cold and windy in the winter but still worth it to stroll through. Museums can be a hit or miss.

Swiss In Hong Kong ????????????????
Great place: a fortress on a small island around 15 minutes far away of Helsinki. Go there with the ferry and walk around. Best view in the south of the island!

James Mashiri
Great history. Very good example of a fortress island. UNESCO world heritage site. Be sure to visit the WWII submarine Vesikko and the lighthouse church as they're asking the few left in the world.

Fred Spofforth
Quiet beautiful island. If you are in Helsinki for more than a day, don’t miss it. It is a short pleasant ferry ride from central Helsinki and the island has enough to occupy you for a few hours.

The Suomenlinna Church in Finland was built as a Greek Orthodox

Kuninkaanportti (Finnish for 'the king's gate') is the principal

The Mannerheim Museum is located in Helsinki, Finland. It is dedicated

St. Henry's Cathedral in Helsinki, Finland, is dedicated to Henry,

Wolf's Lair is the standard English name for Wolfsschanze, Adolf 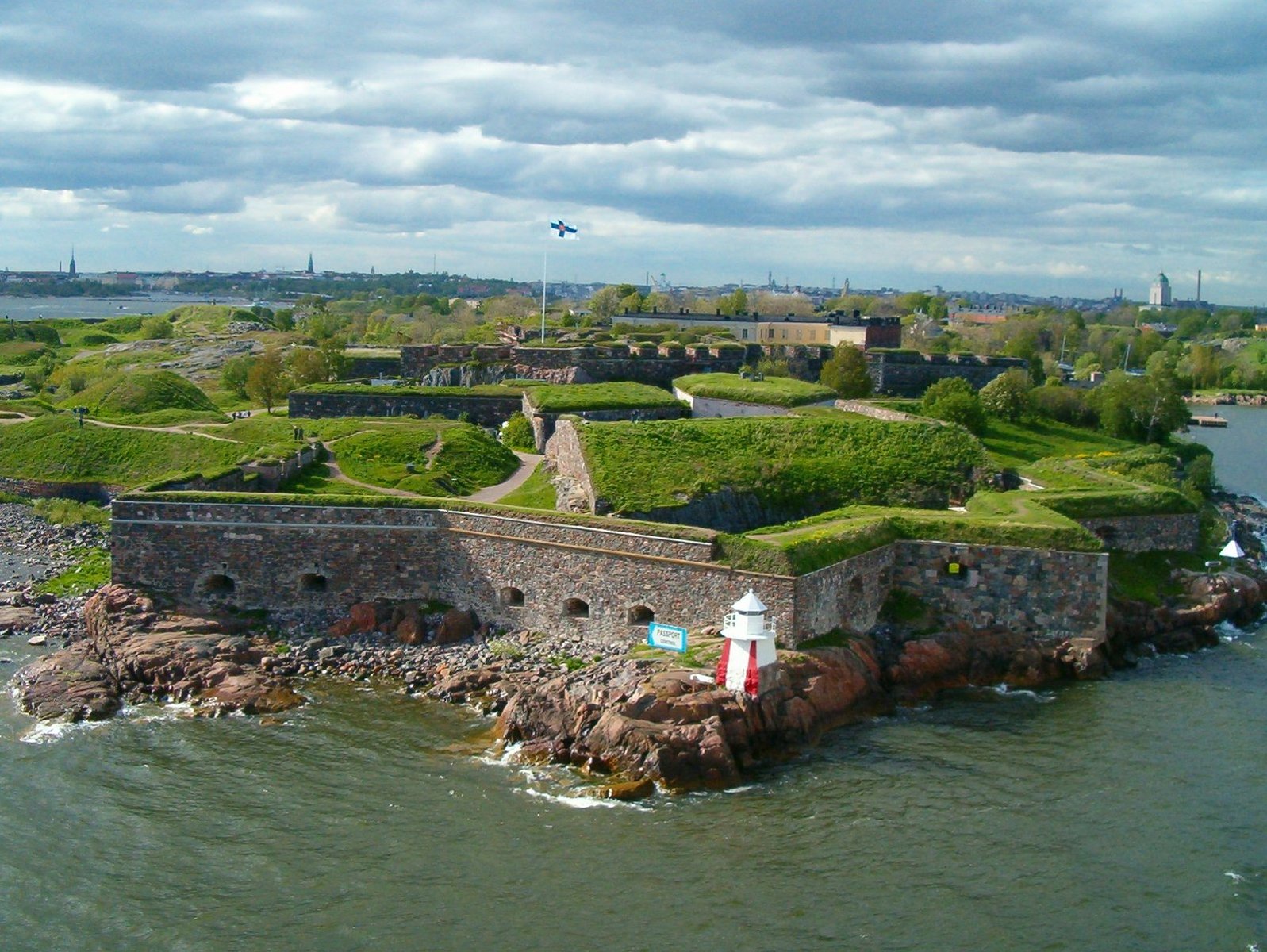 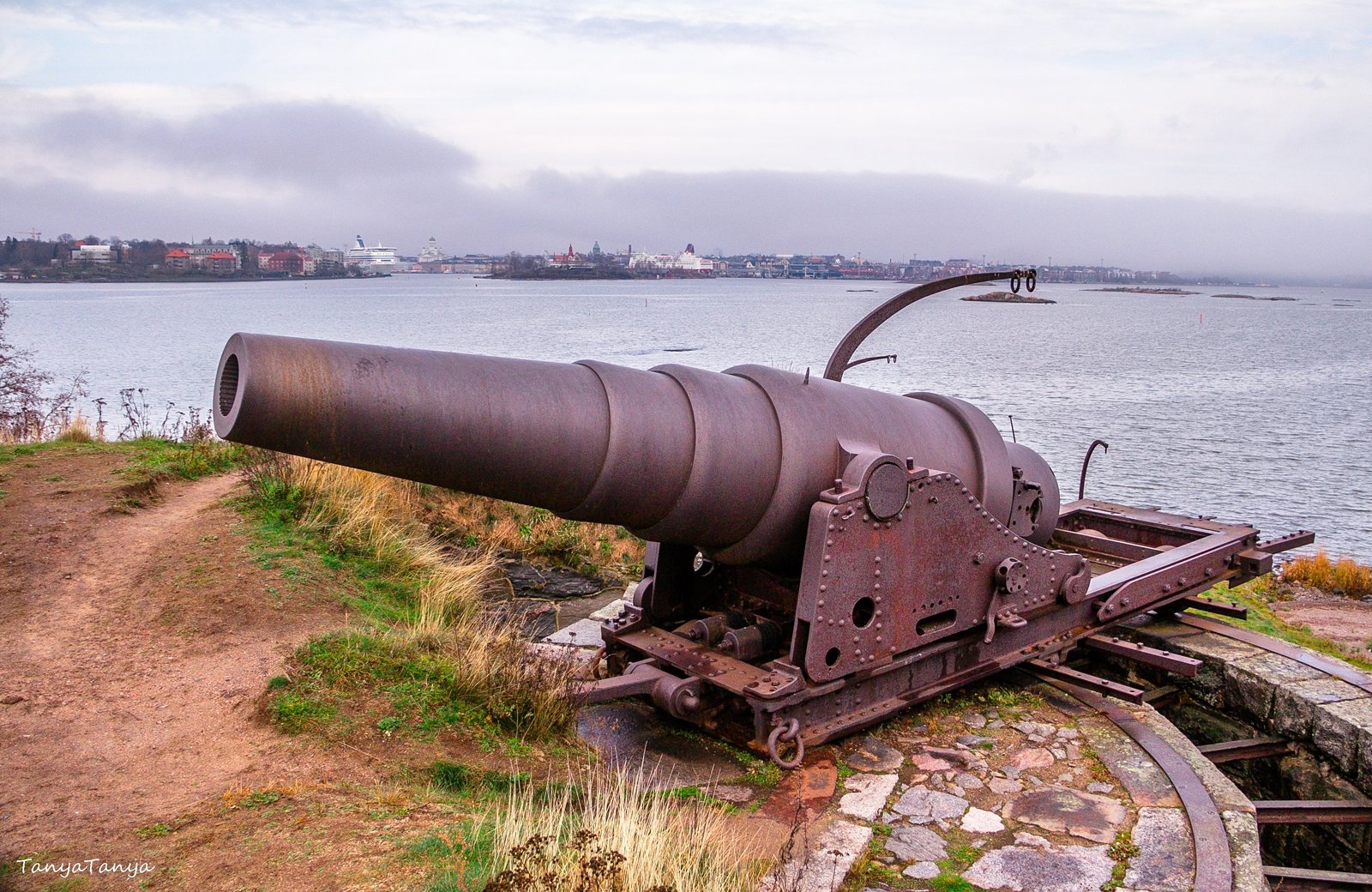 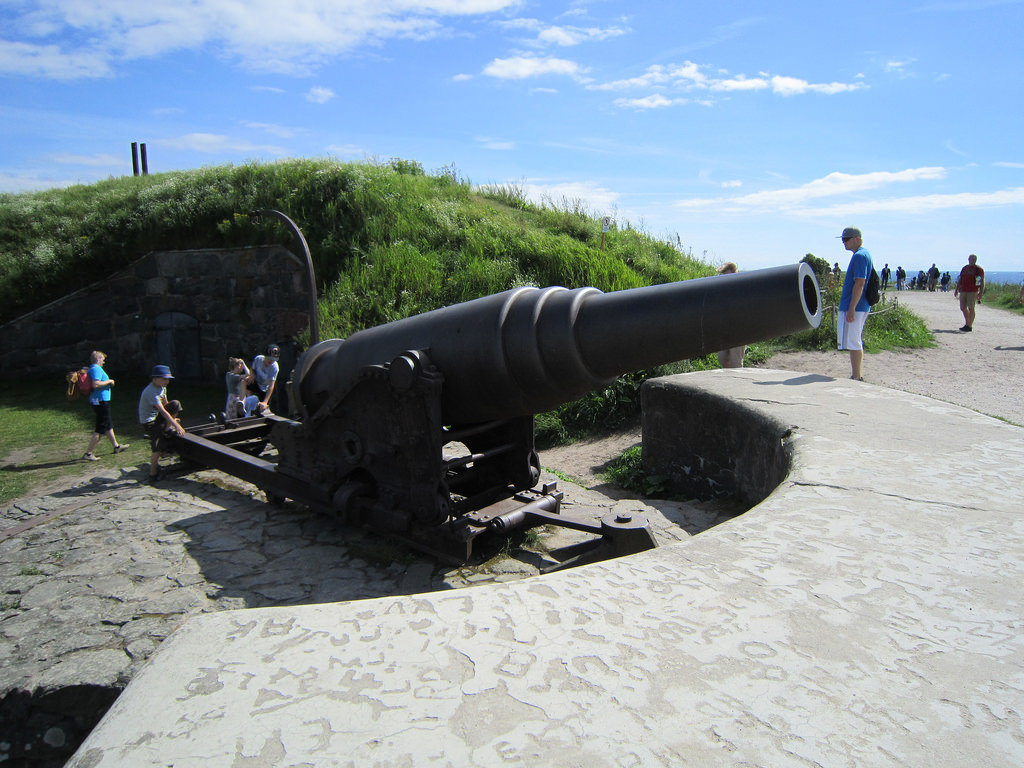 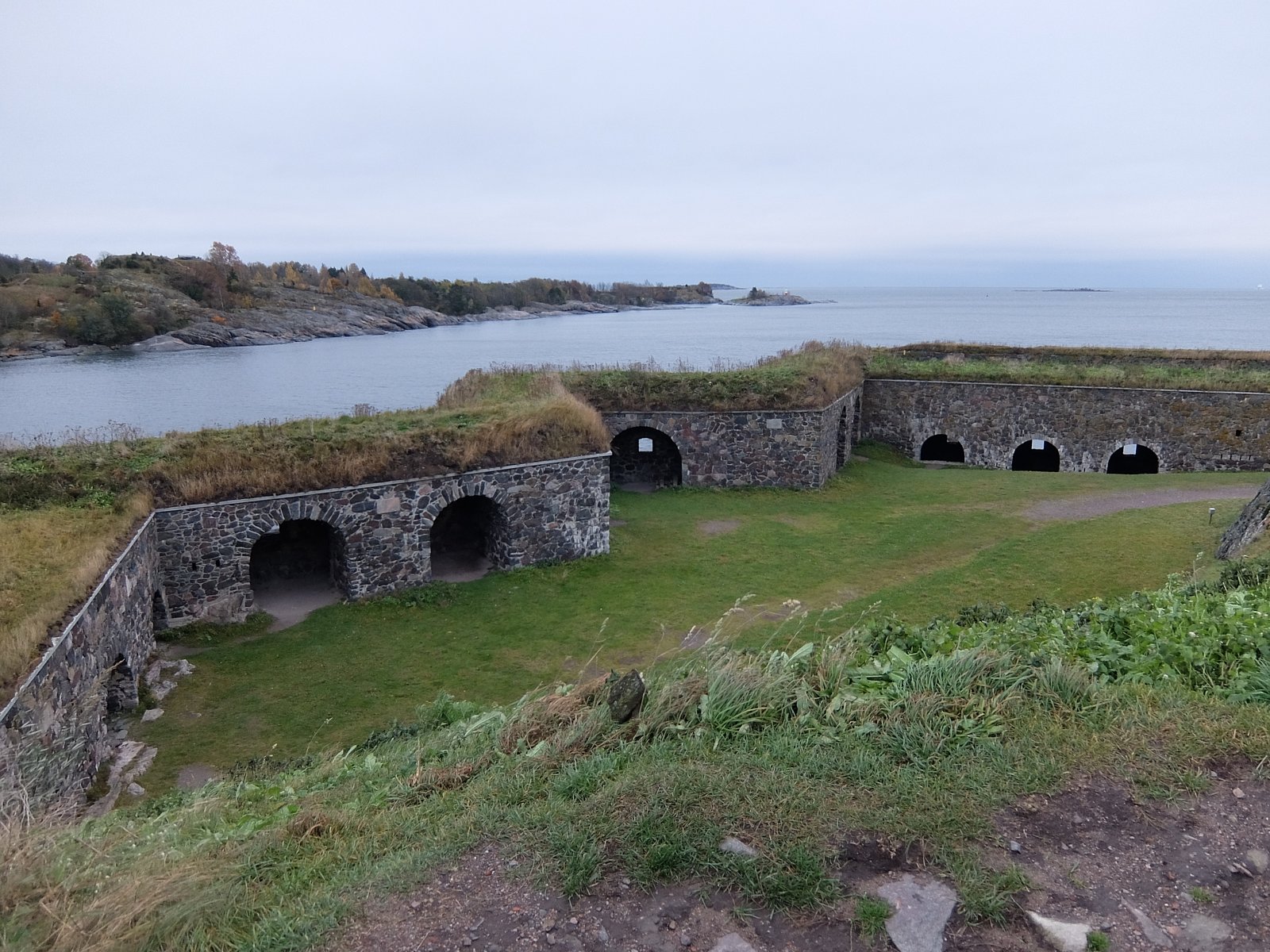 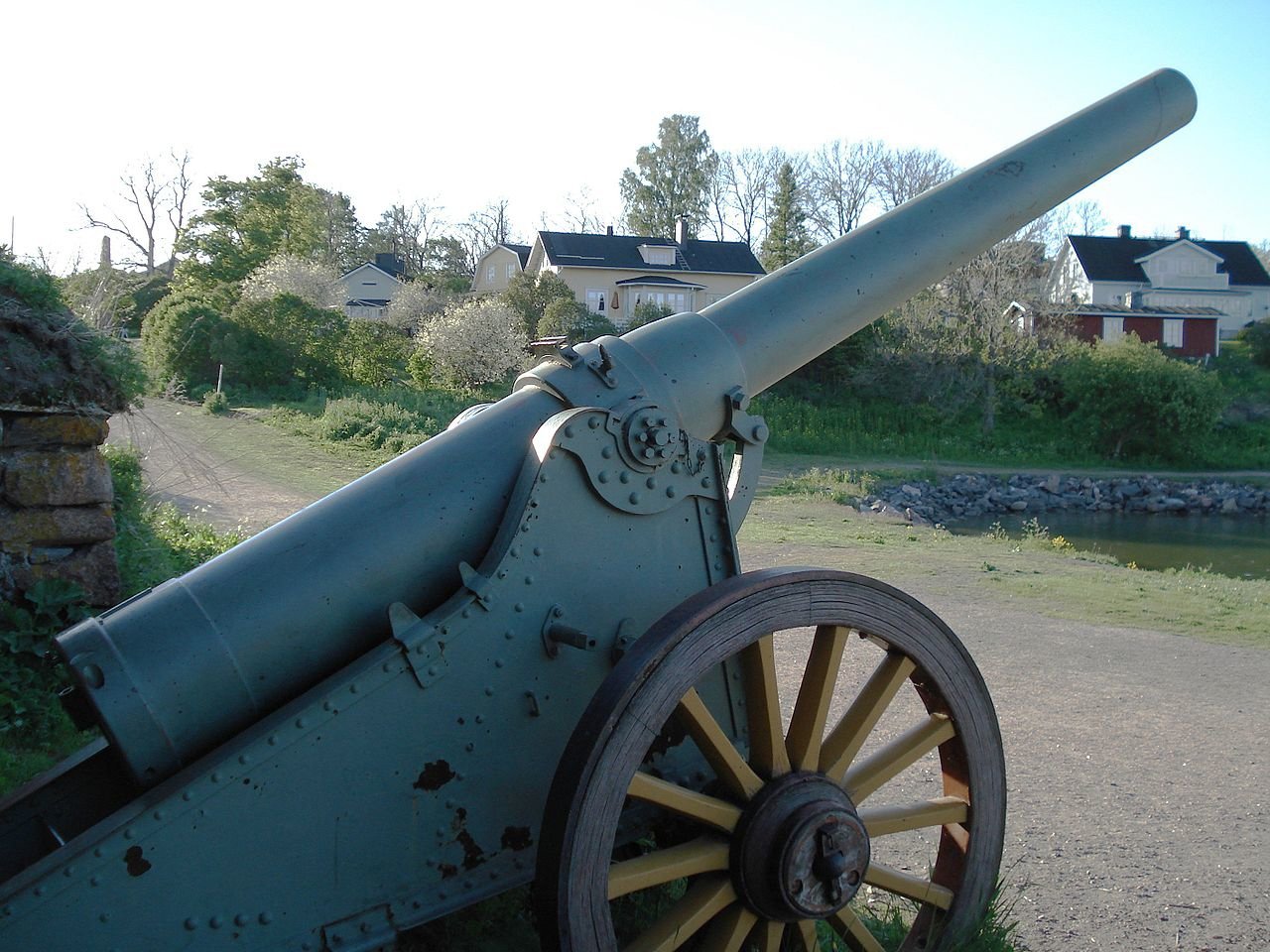 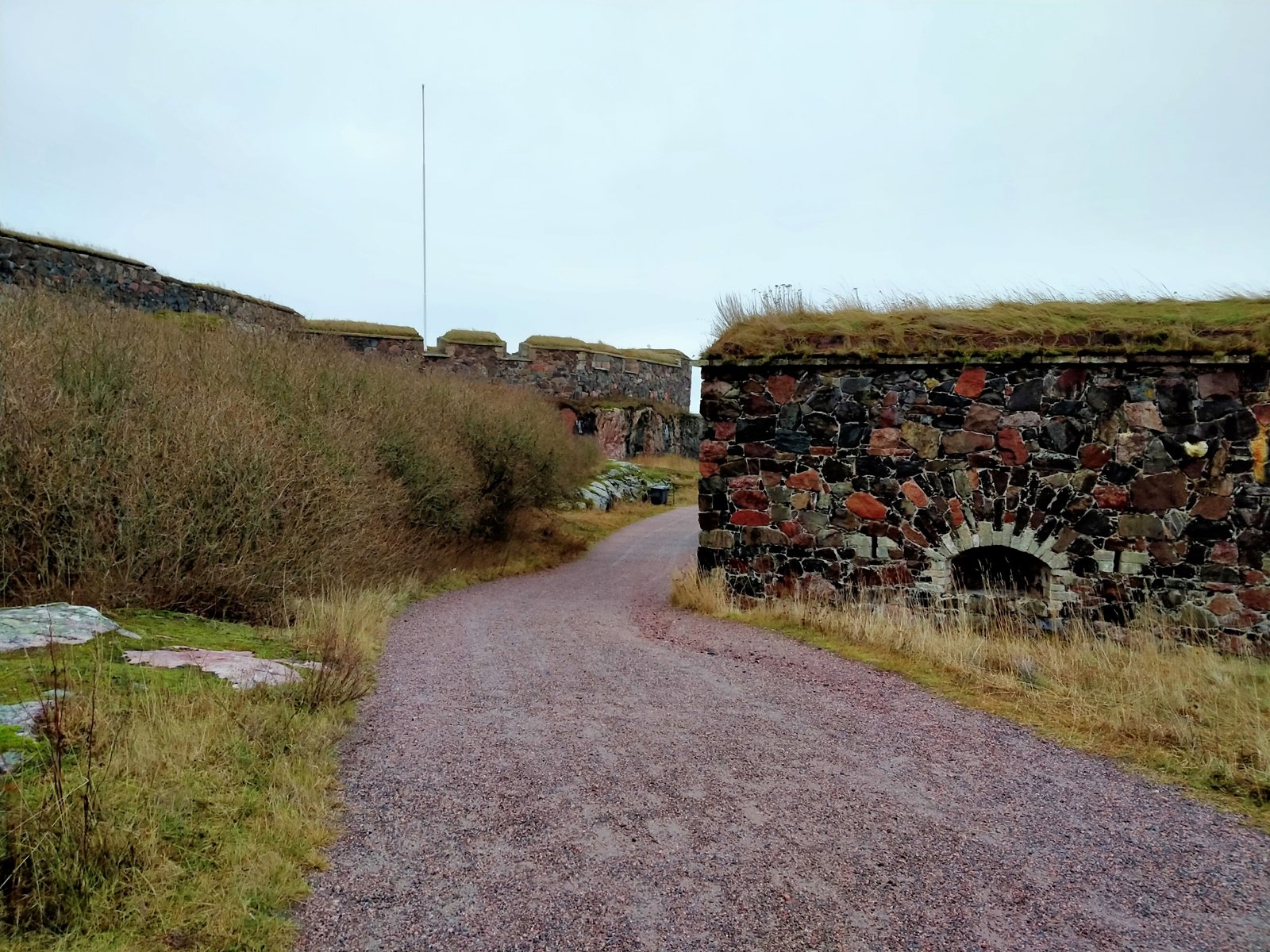 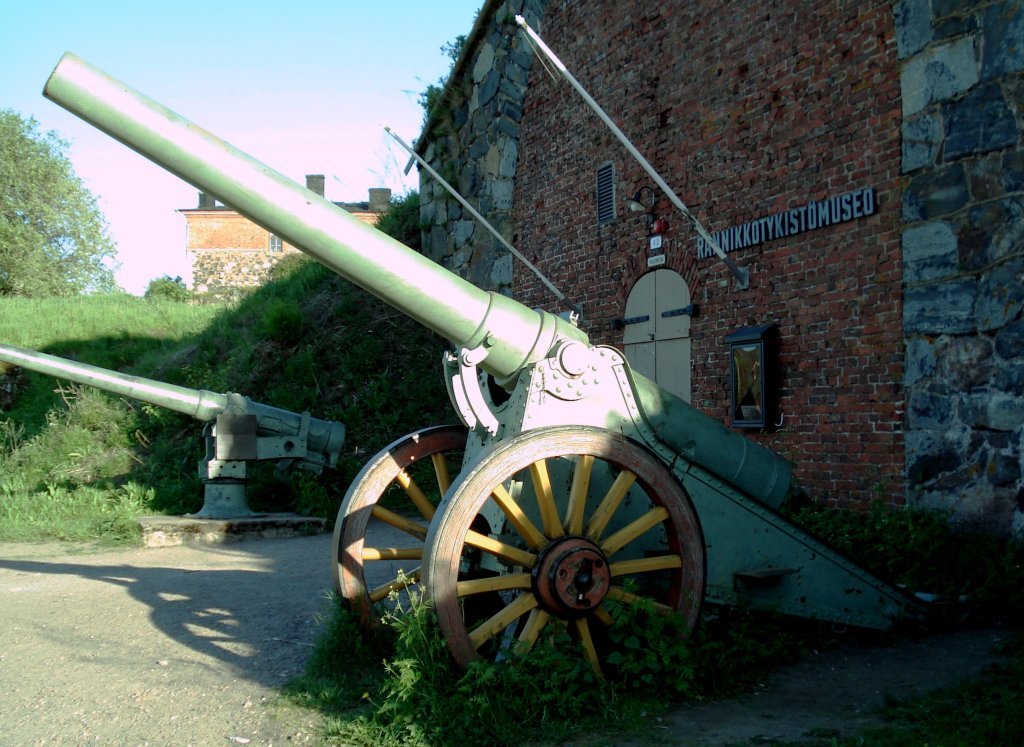 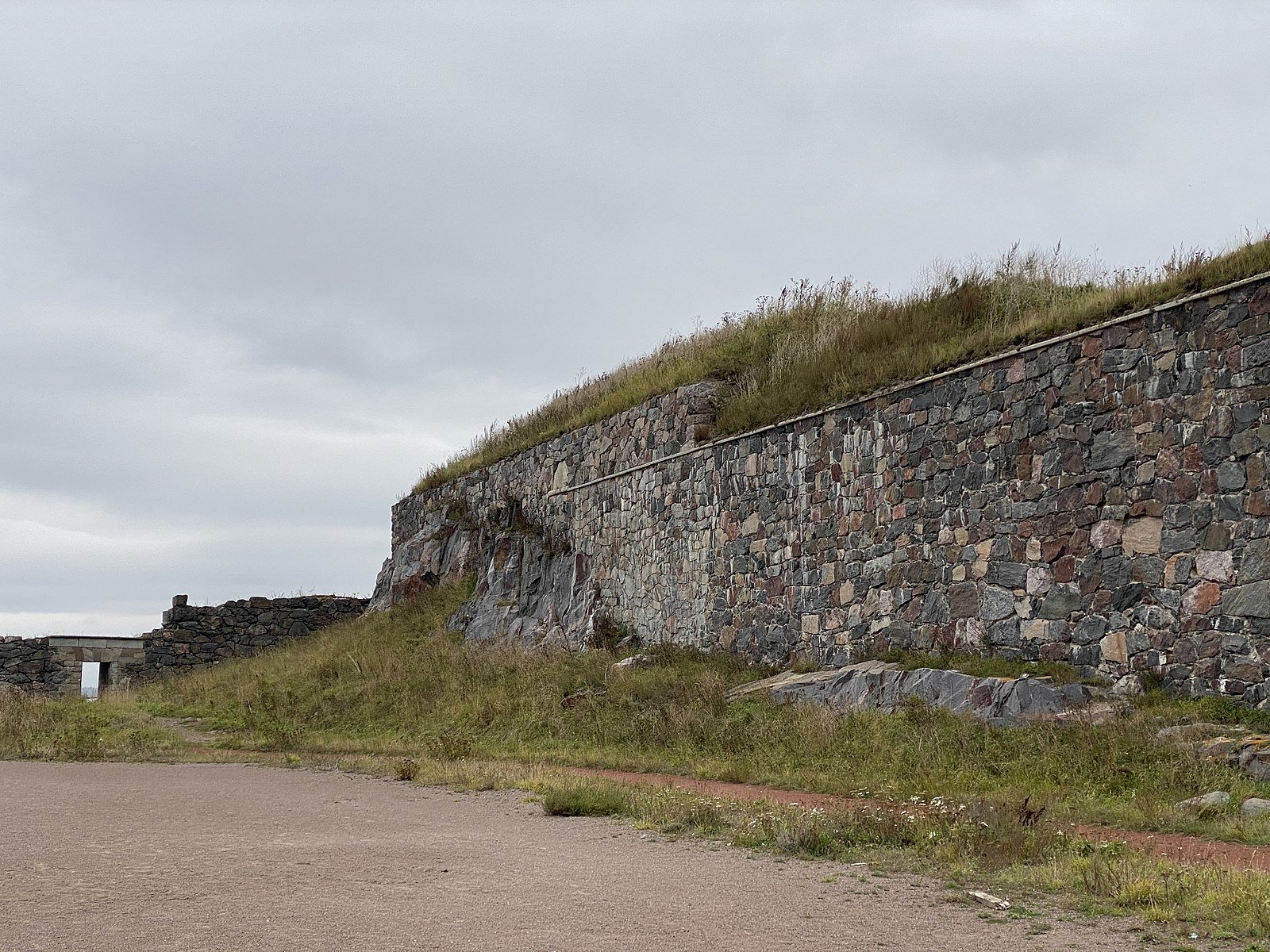 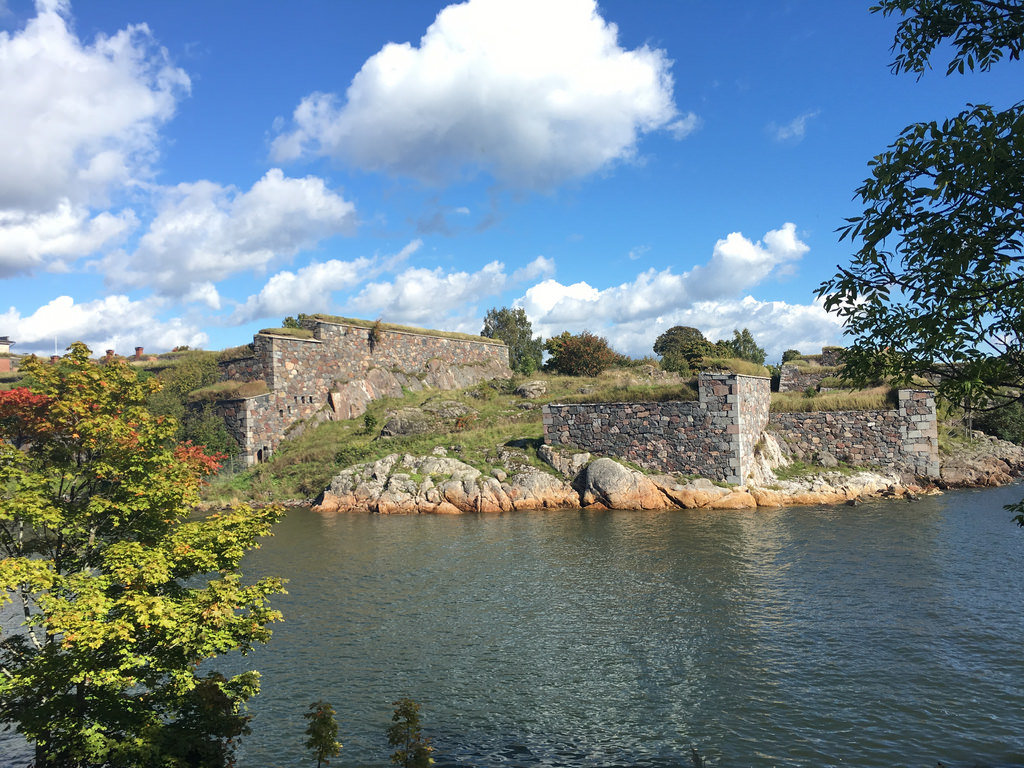 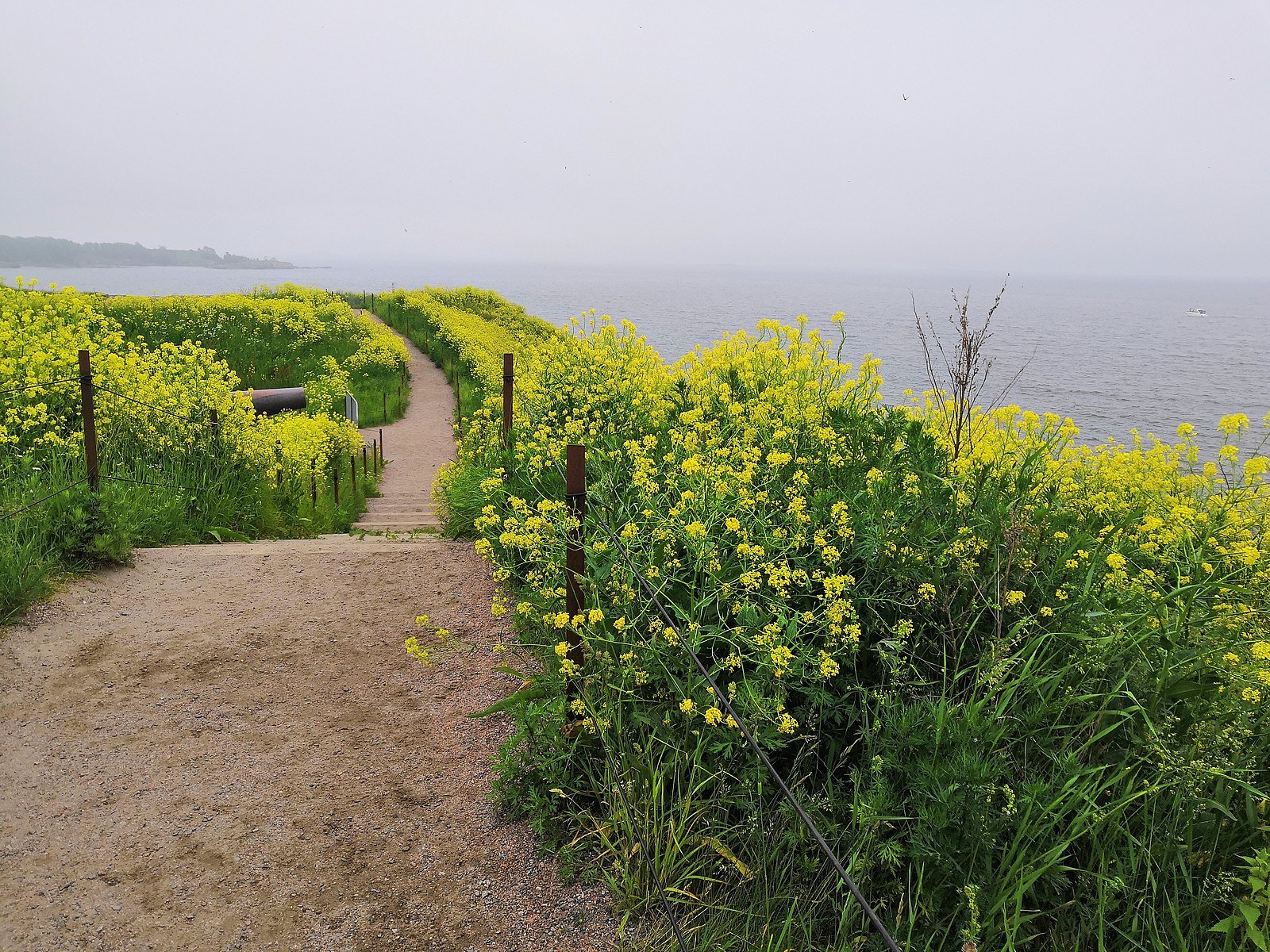 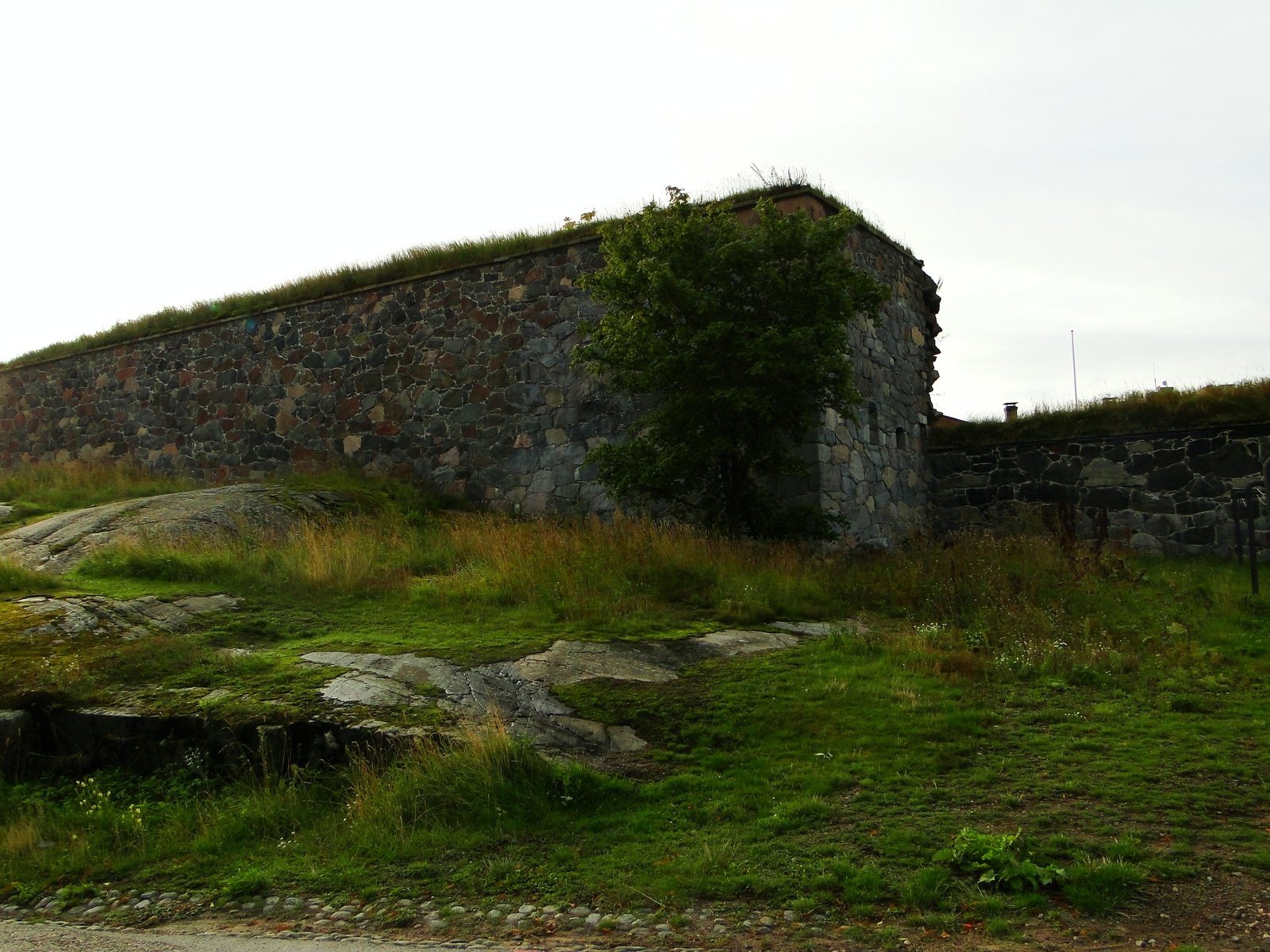 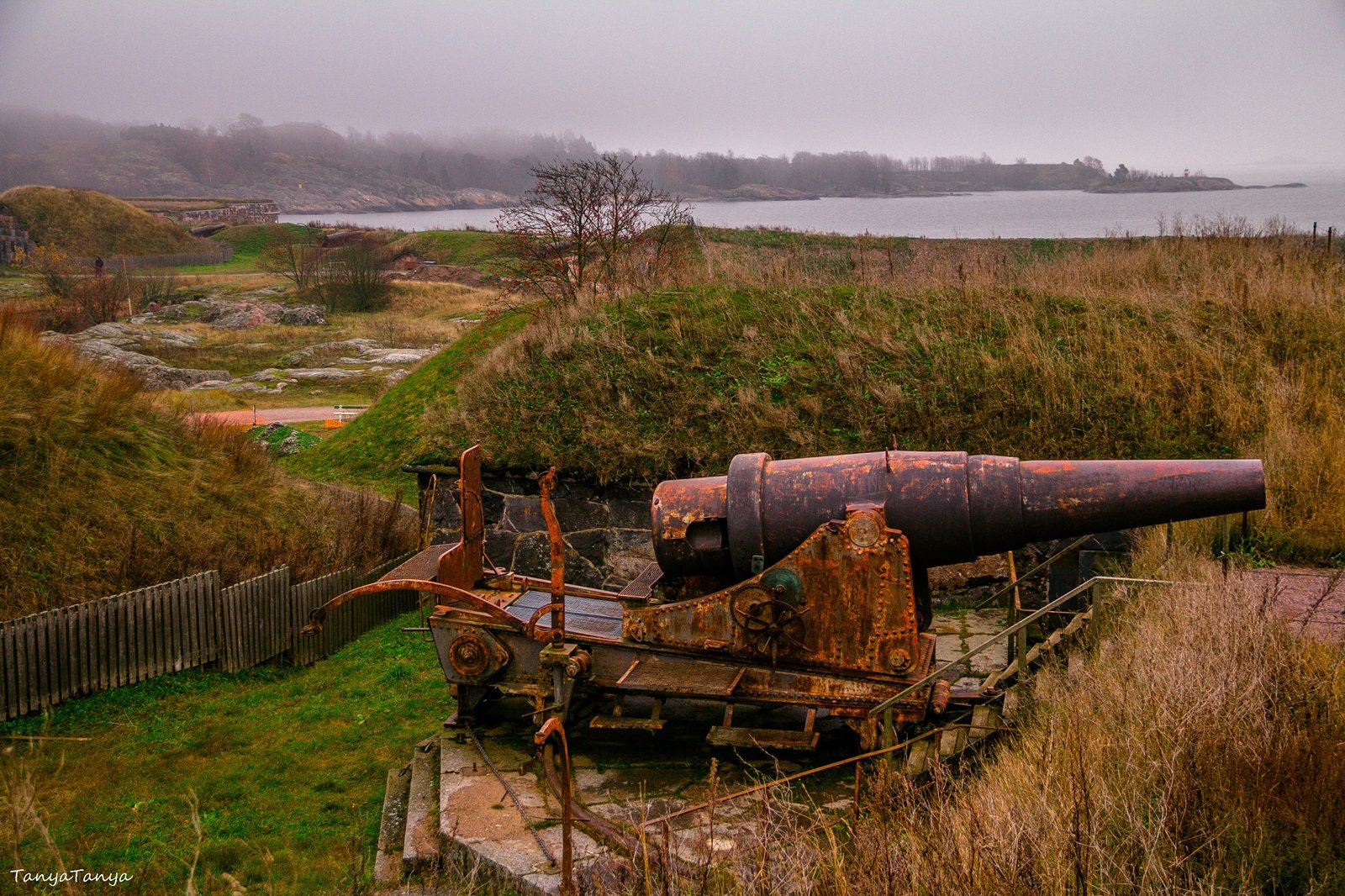 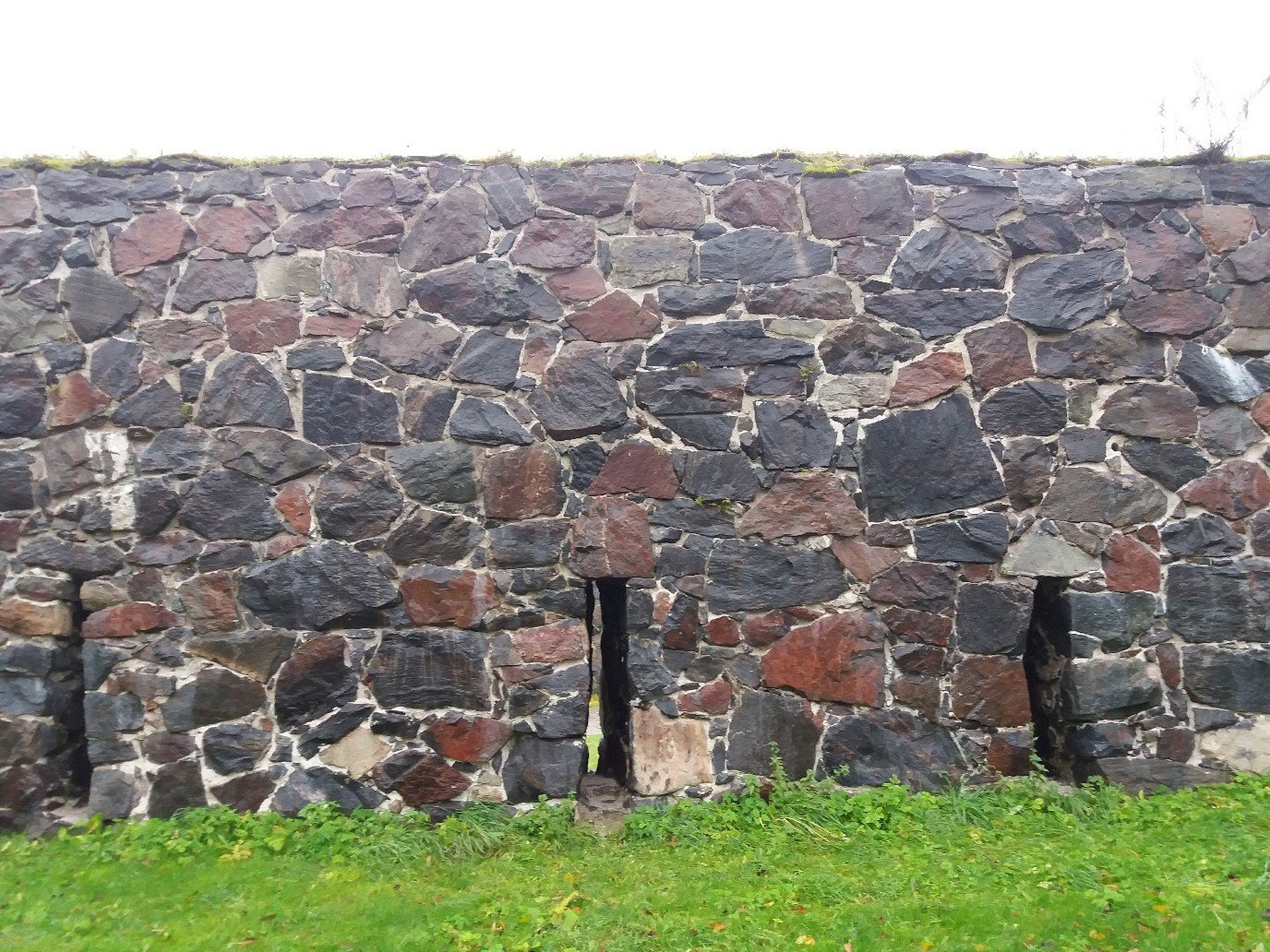 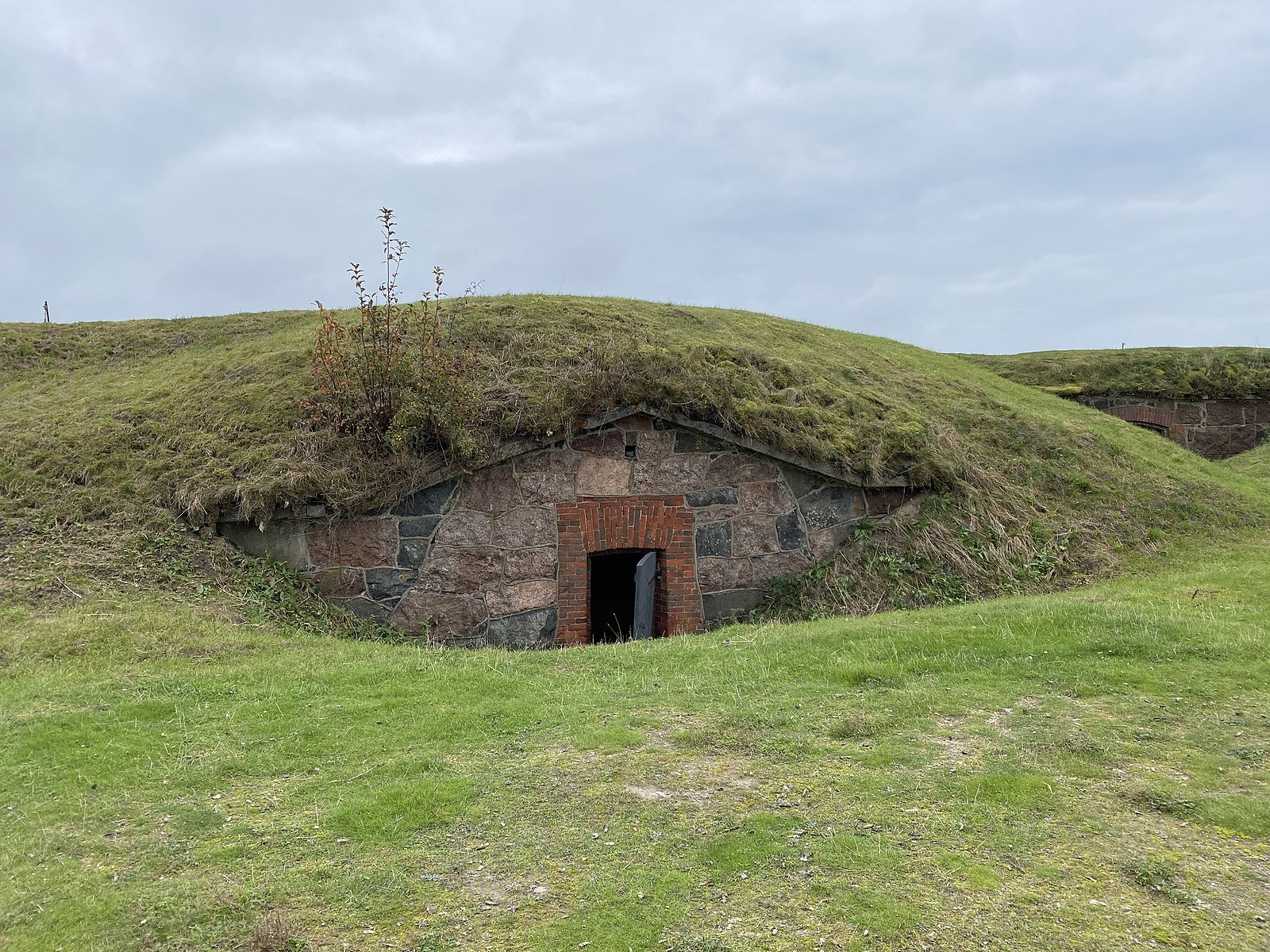 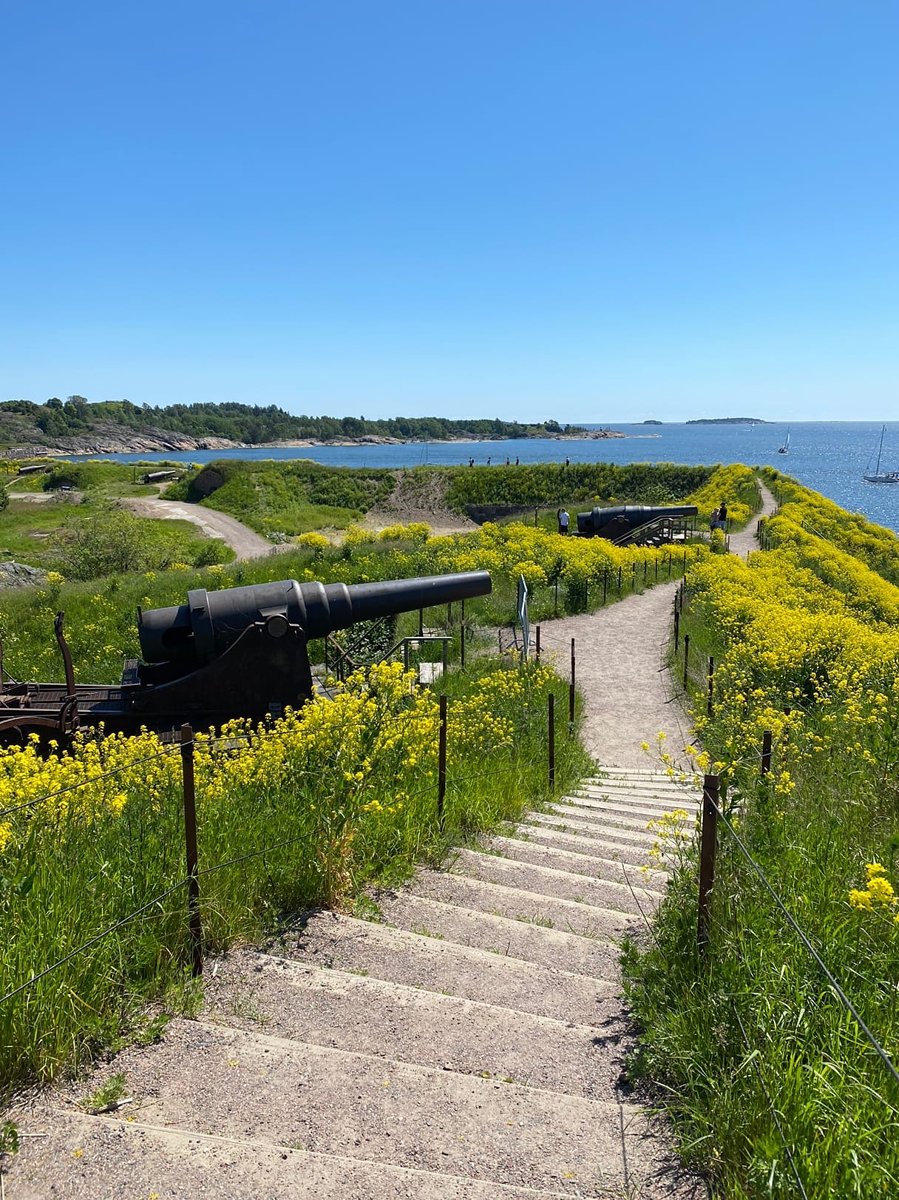 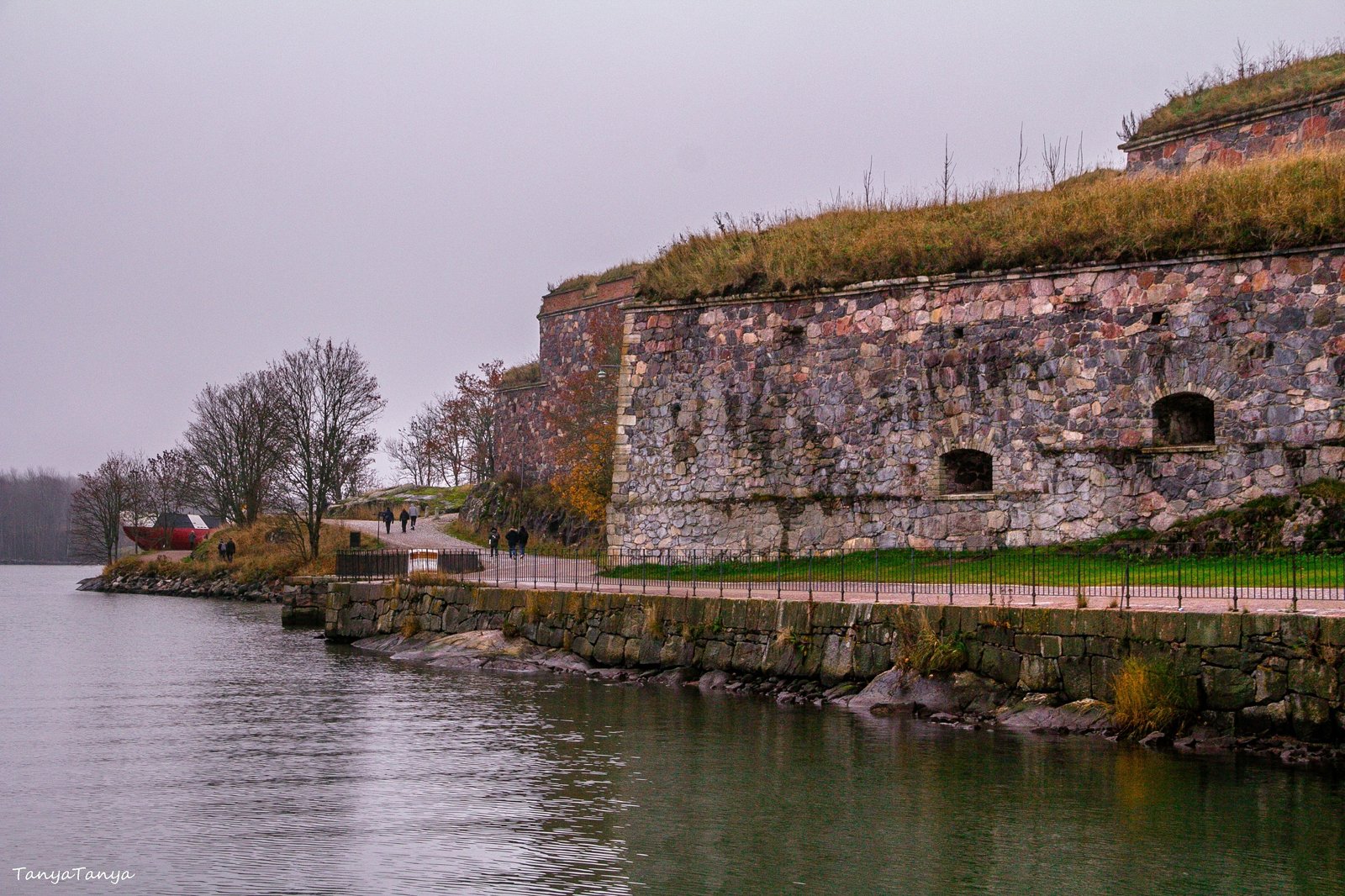 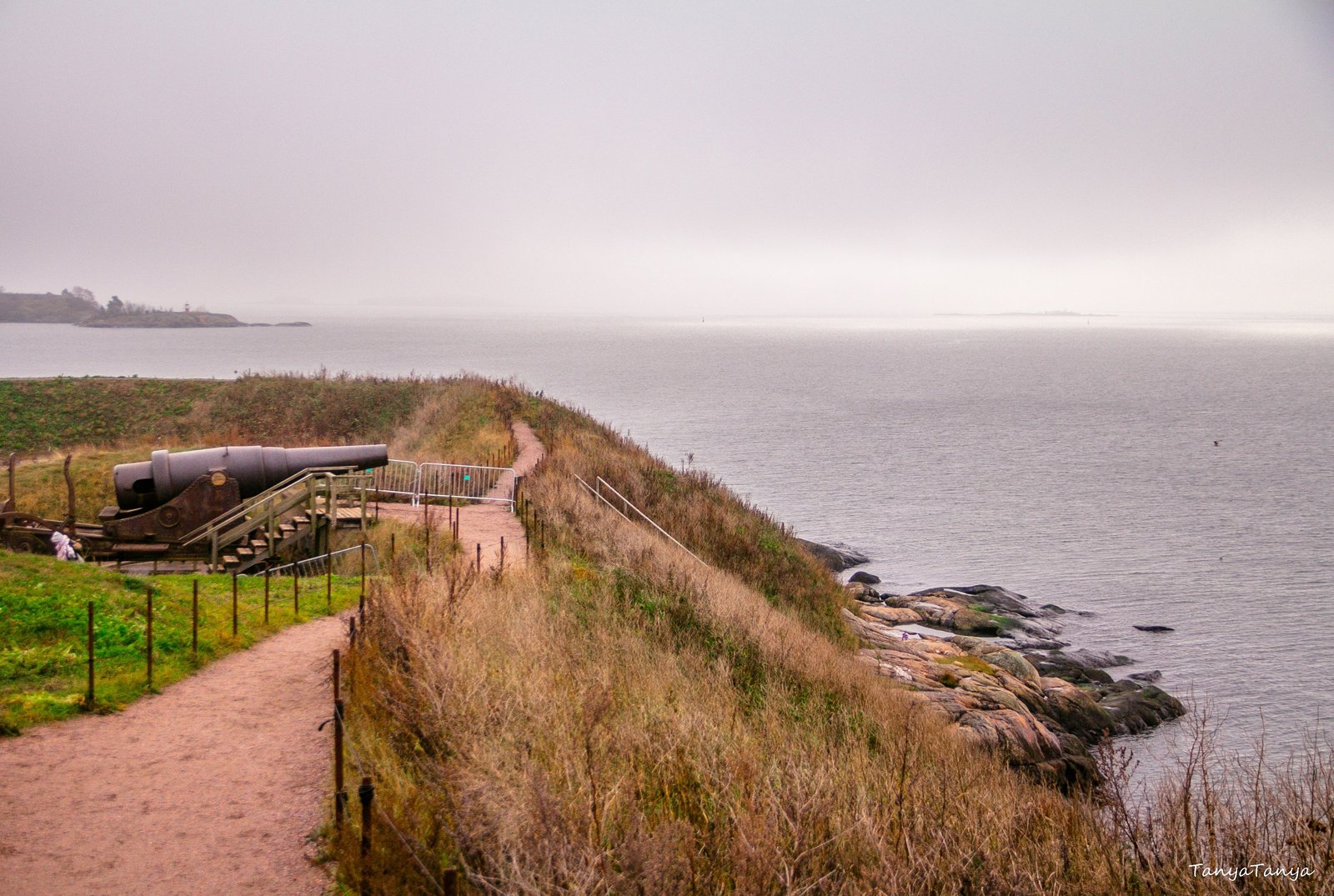 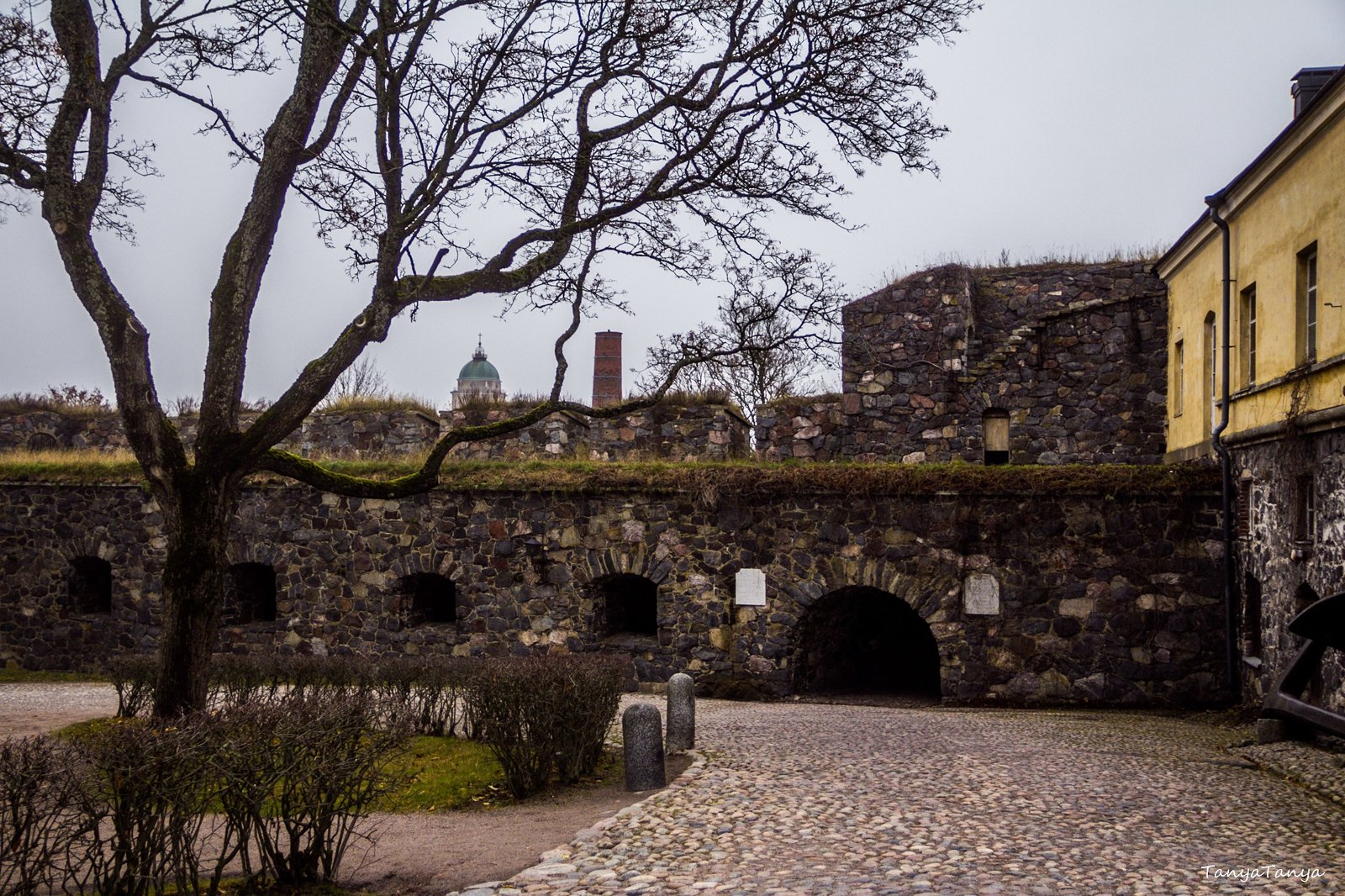 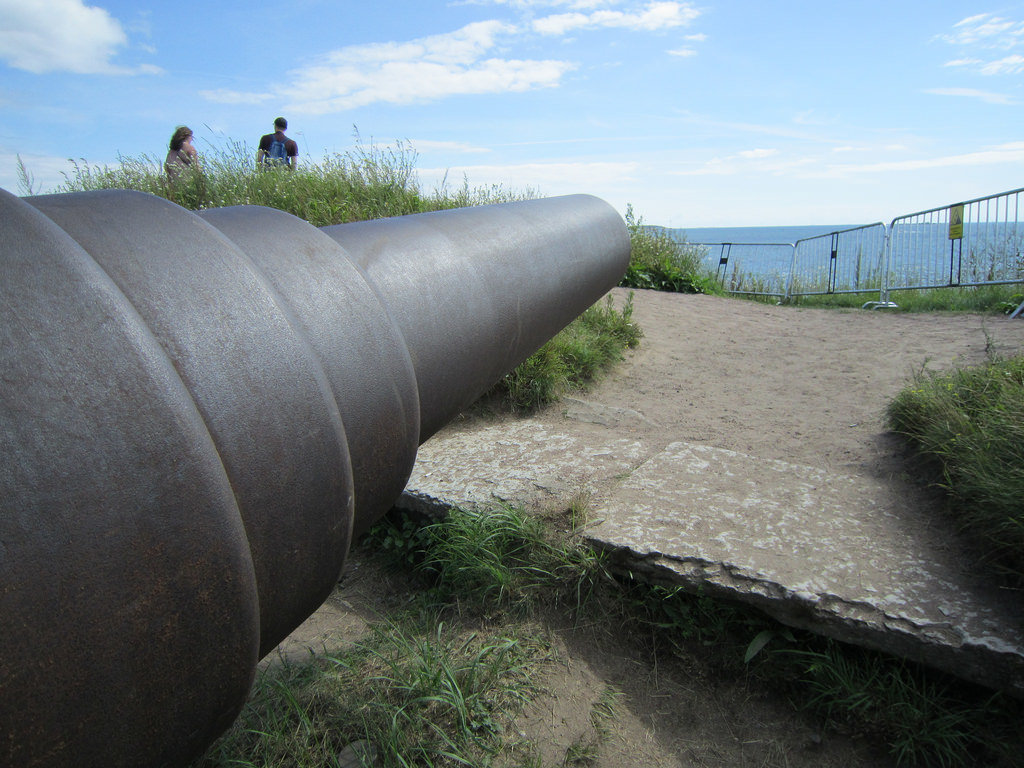 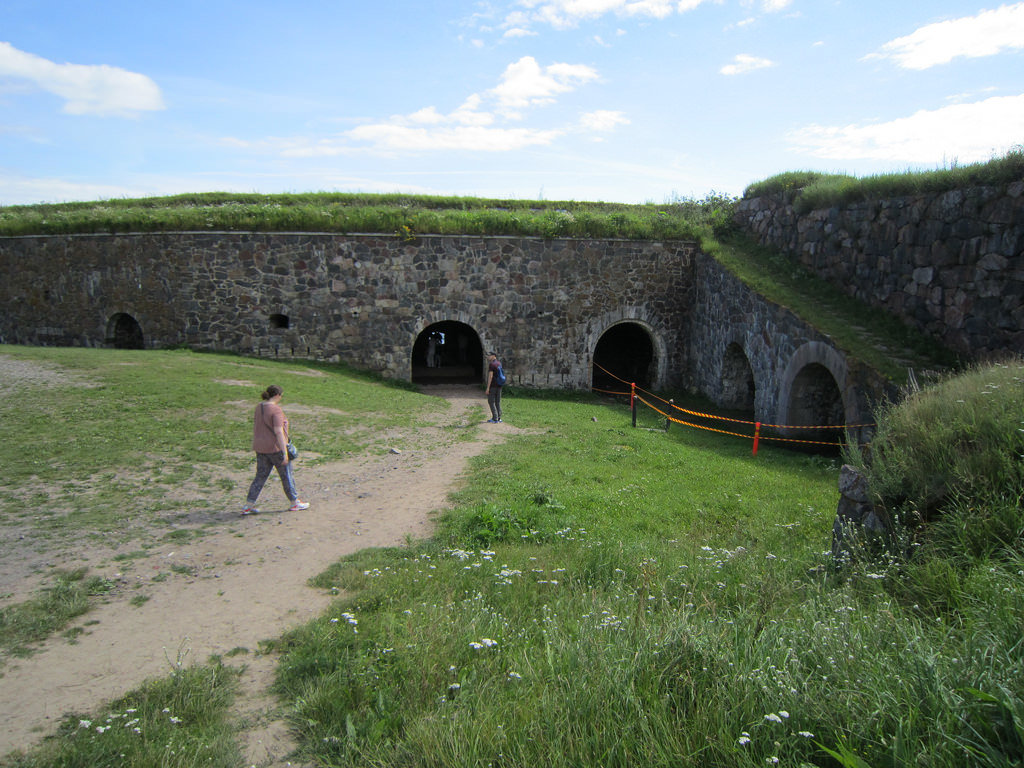 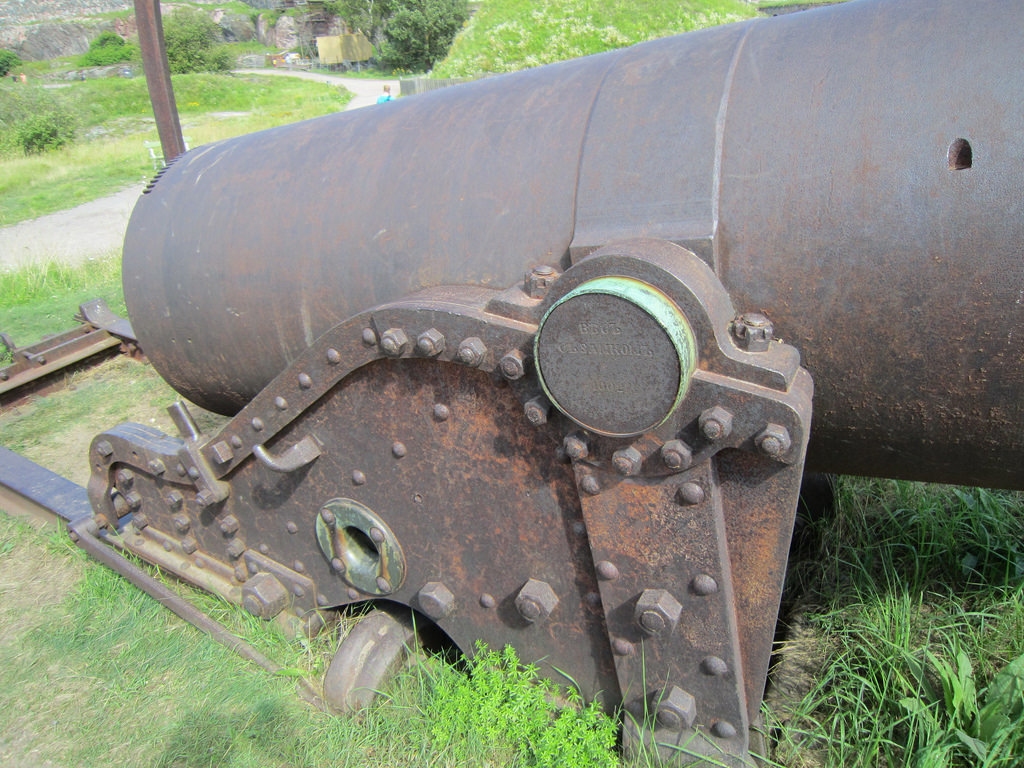