×
What are you looking for?
See all results
Fountains in Paris 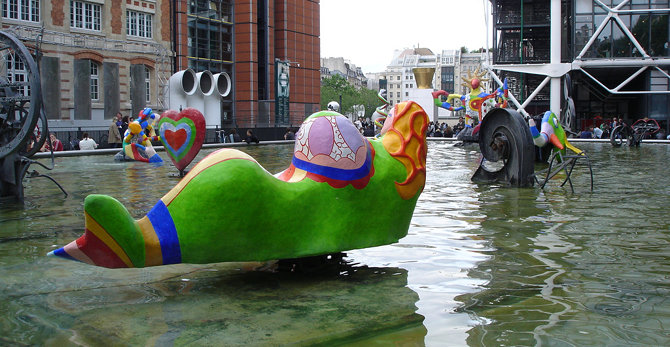 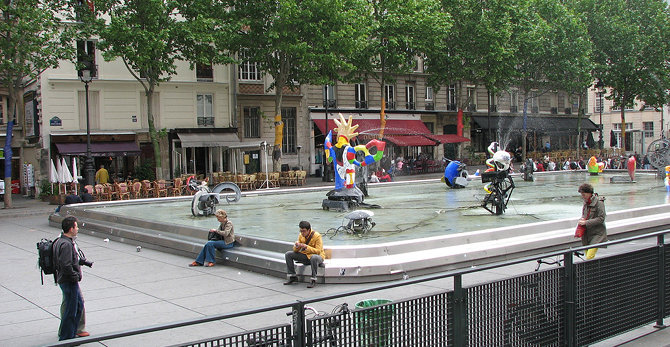 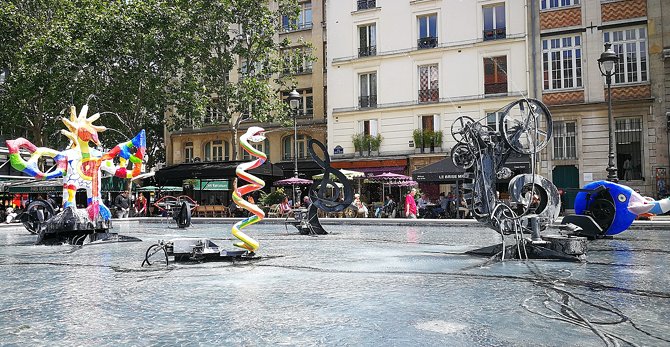 The Stravinsky Fountain (fr: La Fontaine Stravinsky) is a whimsical public fountain ornamented with sixteen works of sculpture,moving and spraying water, representing the works of composer Igor Stravinsky. It was created in 1983 by sculptors Jean Tinguely and Niki de Saint Phalle, and is located on Place Stravinsky, next to the Centre Pompidou, in Paris.

The Stravinsky Fountain is a shallow basin of 580 square meters located in Place Stravinsky, between the Centre Pompidou and the Church of Saint-Merri. Within the basin are sixteen works of sculpture inspired by Igor Stravinsky's the Rite of Spring, and his other major works; The black mechanical pieces of sculpture are by Jean Tinguely, the colored works by Niki de Saint Phalle.

The sculptures in the fountain represent:

The basin covers some of the rooms and offices of IRCAM, the Institut de recherche et coordination accoustique/musique, an organization devoted to promoting modern music and musicology, connected with the Pompidou Center. The founder of the IRCAM, composer and conductor Pierre Boulez, suggested the work of Stravinsky as a theme for the fountain. Because of the offices and rooms below, the fountain was designed to be as light as possible, with very shallow water, a bottom of stainless steel, and sculptures composed of plastics and other light materials.

The Stravinsky Fountain was part of a larger sculptural program, launched by the City of Paris in 1978, to build seven contemporary fountains with sculpture in different squares of Paris. Besides the Stravinsky Fountain, this project included new fountains at the Hotel de Ville and within the gardens of the Palais Royal. They were to be the first public fountains built in Paris since the fountains of the Palais de Chaillot were built for the Paris Exposition of 1937. It was also part of a major project by the City of Paris to redevelop the area around the old city markets, Les Halles, which had been torn down in 1971, and to re-animate the area with pedestrian streets, squares and works of art.

In October, 1981, the mayor of Paris, Jacques Chirac, announced that a new fountain would be built near the Centre Pompidou, and announced that Jean Tinguely and Niki de Saint Phalle had been selected to design the fountain. "Such a work must necessarily have modern lines, marrying with those of the Centre Pompidou, Chirac said, and he noted the success of the fountain that Tinguely had recently done in Basel, Switzerland. . The City of Paris paid two million French francs for the project, which was matched by two million francs from Jack Lang, the Minister of Culture. The financial agreement agreement was formally signed on December 15, 1982, allowing the project to go ahead. Other contribution came from private sponsors; la société Lyonnaise des eaux (500,000 francs), la fondation Scaler (150 francs) and the Swiss government. .

One sensitive artistic issue had to be resolved; the commission had originally been given to Jean Tinguely alone, and therefore the work would have been entirely composed of his black-painted mechanical sculptures. But in May 1982 he asked that brightly-colored works by Niki de Saint Phalle (who was also Tinguely's wife) also be included. This caused concerns at the Sous-Direction du Patromoine culturel of the Bureau of Monuments of Paris, which had originally commissioned the sculpture; they feared that the brightly colored works of Niki de Saint Phale would visually overwhelm the dark works of Tinguely. Officials of the Ministry of Culture and Sous-Direction du Patrimoine persuaded Tinguely to reduce the number of works by Niki de Saint Phale to four or five, and both the Ministry of Culture and City of Paris agreed that it would be a joint project by Tinguely and Saint Phalle.

A few technical issues also needed to be resolved. Tingueley did not want the water treated, and prefered that moss be allowed to grow. Tinguely also wanted to use very low power electric motors for the fountains, to avoid any danger of electrocuting people wading in the fountains. The sculptures were not attached to the bottom of the basin, but simply placed there.

The finished fountain was dedicated on March 16, 1983, by Mayor Chirac, Minister of Culture Jack Lang, and Madame Pompidou, the widow of President Georges Pompidou. During the ceremony, Mayor Chirac and Culture Minister Lang, who were political enemies, avoided looking or speaking to each other.

Under French law and practice, the French state has the legal obligation to maintain fountains, but artists and their descendants have the moral right to control their work. In 1985, Niki de Saint Phalle asked for modifications to be made to one part of the sculpture, Rossignol, to make it more harmonious with other parts of the work. Five years later, she asked that one sculpture, Sirene, be replaced by another earlier work by her, called Nana, seated in a bathing suit. Because of the cost, the substitution was never made.

Tinguely on the fountain

The Hôtel de Ville (Шаблон:IPA-fr, City Hall) in Paris, France, is the

The Place du Châtelet is a public square in Paris, on the right bank

The Théâtre du Châtelet is a theatre and opera house in Paris, Fr 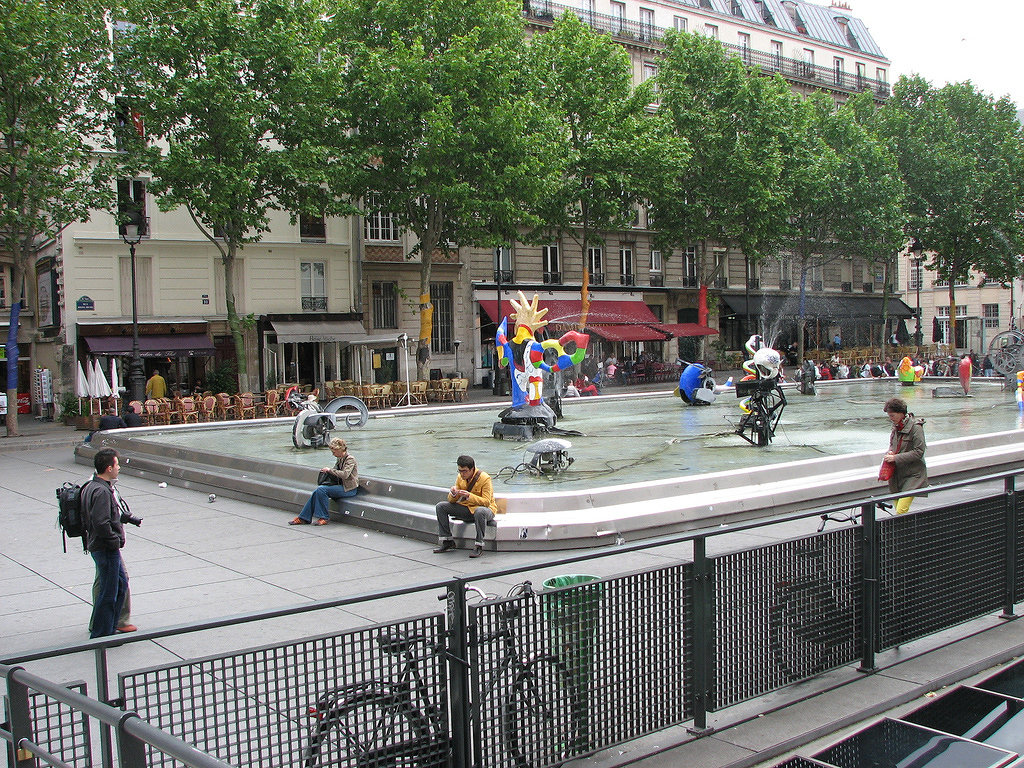 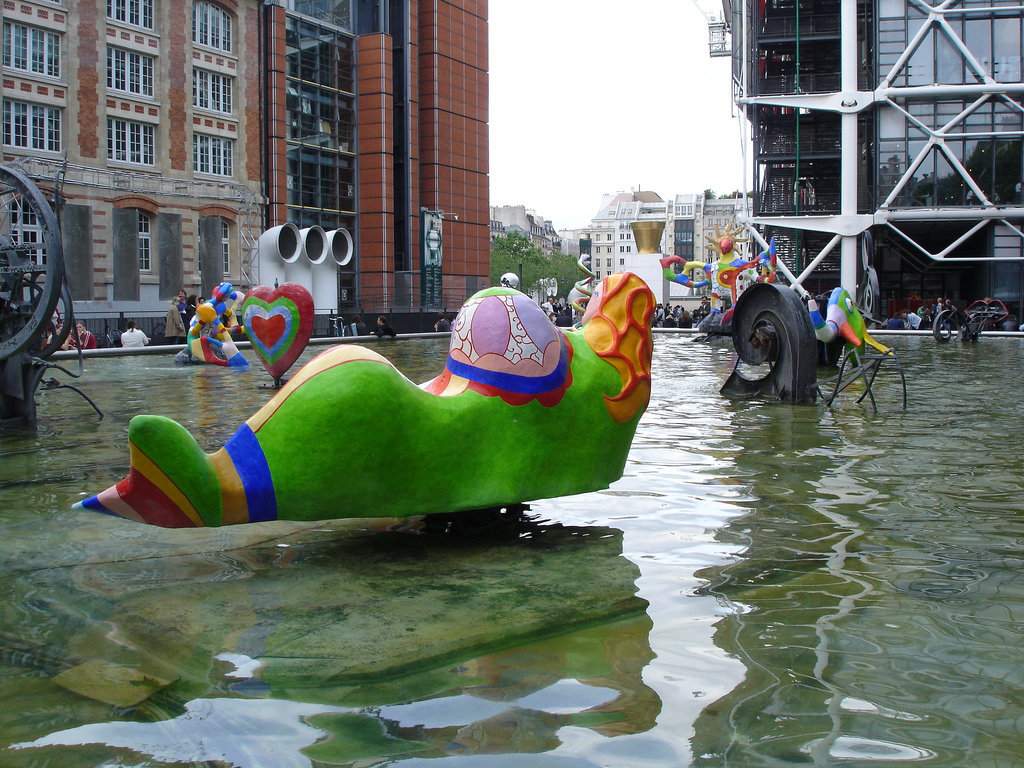 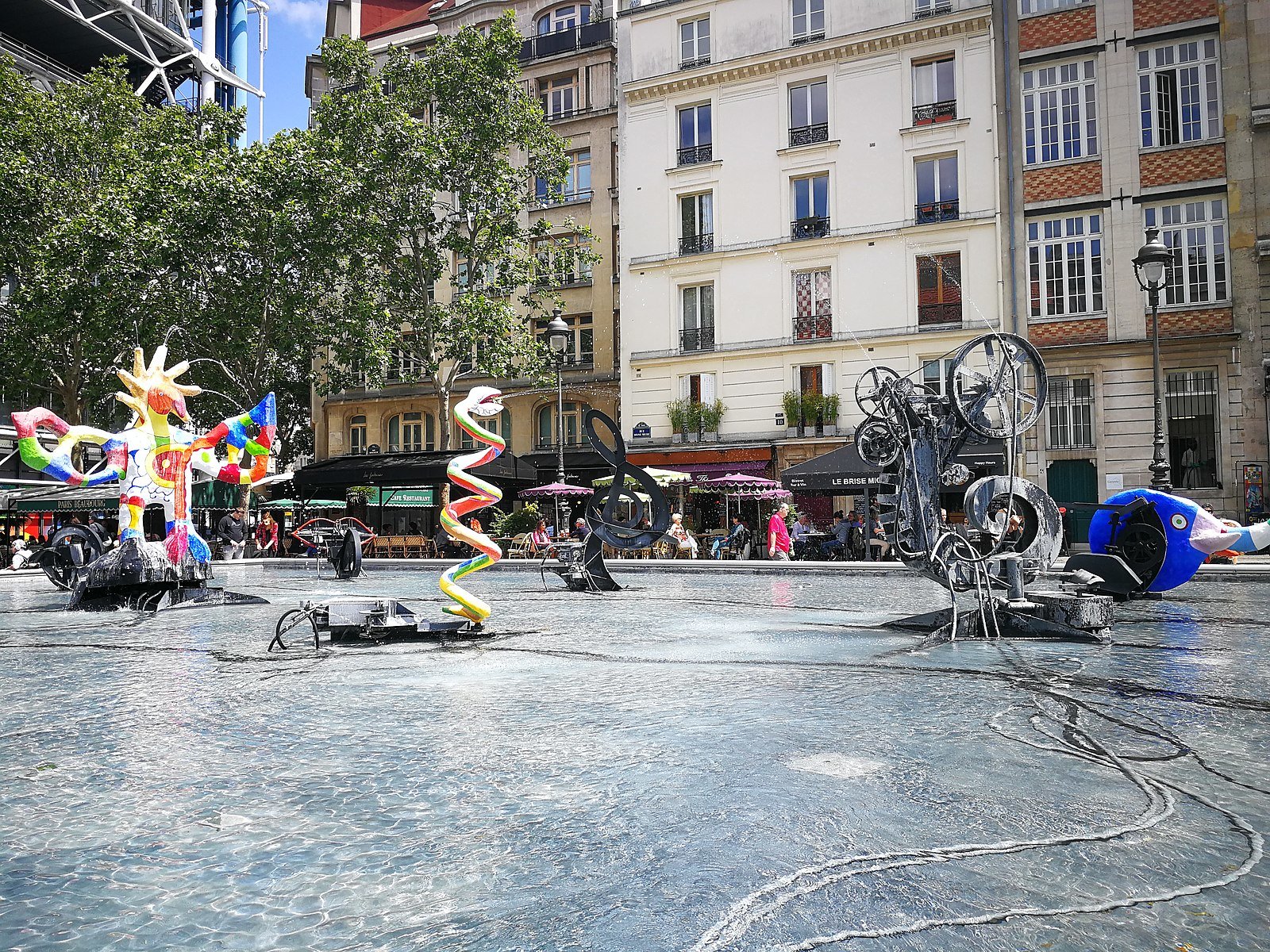 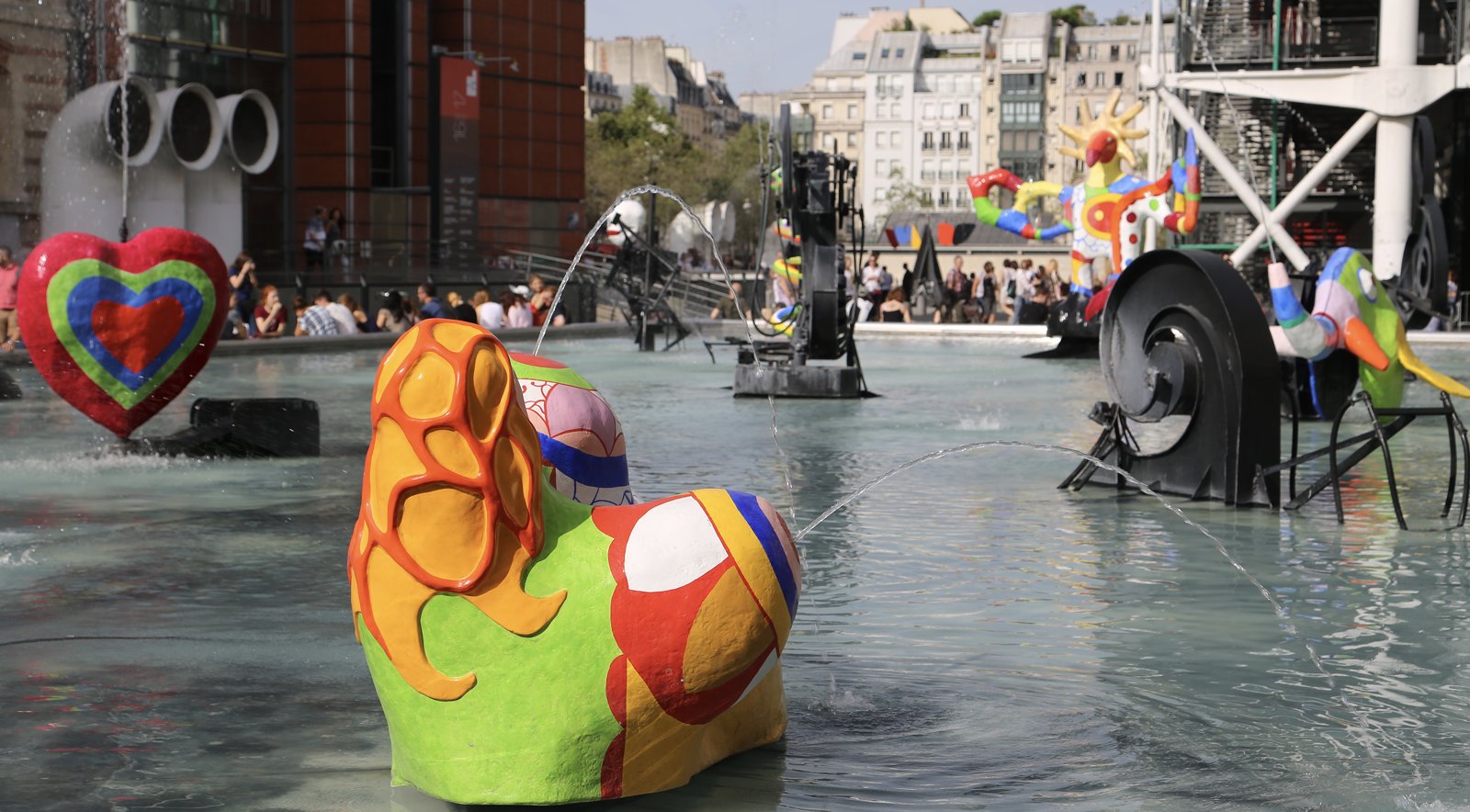 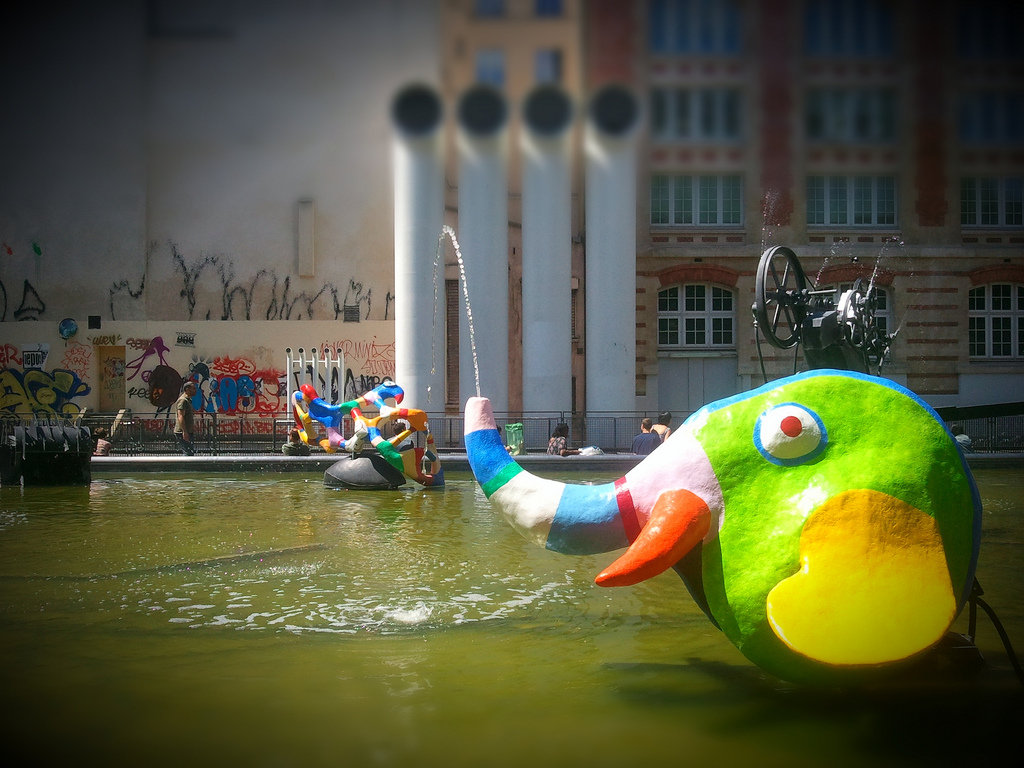 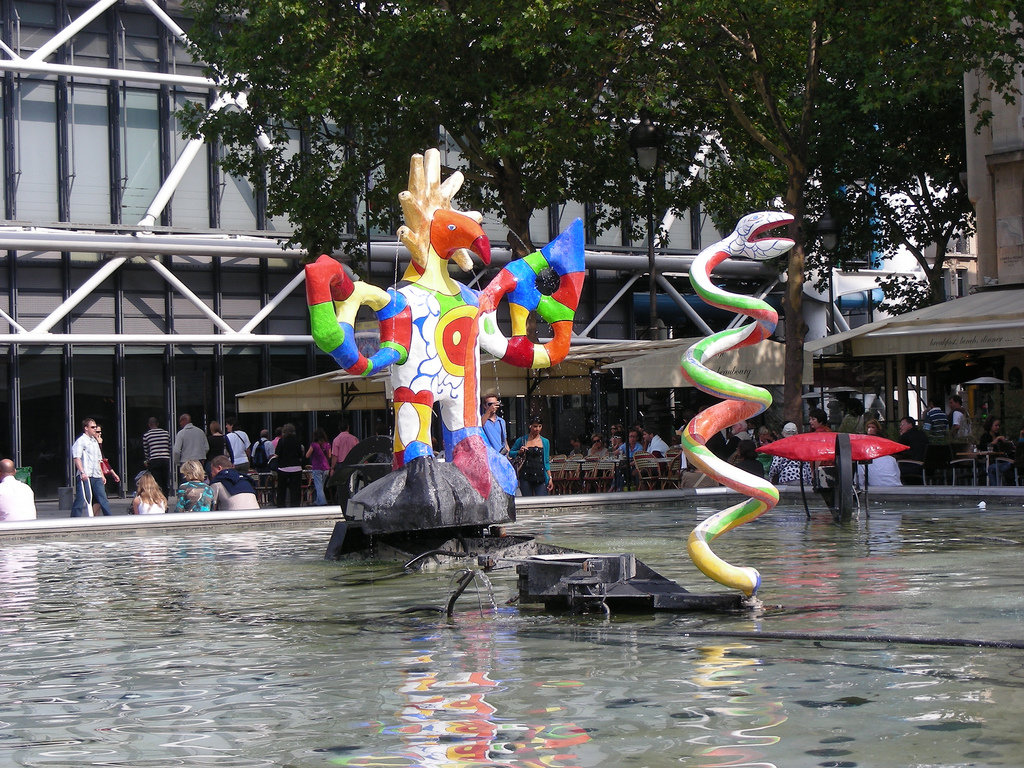