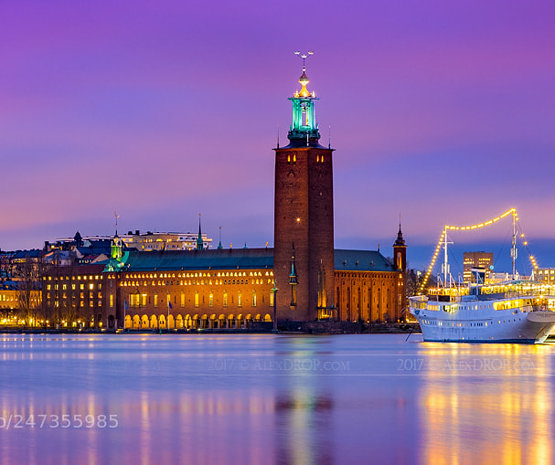 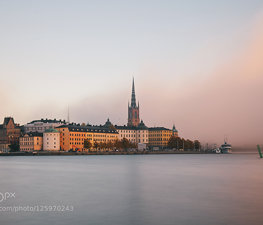 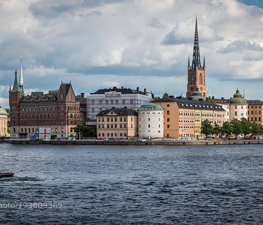 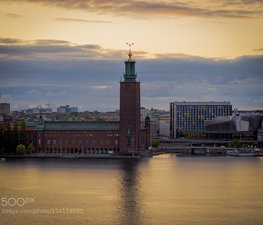 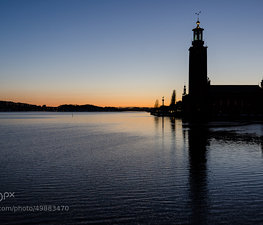 The Stockholm City Hall (Swedish: Stockholms stadshus or Stadshuset locally) is the building of the Municipal Council for the City of Stockholm in Sweden. It stands on the eastern tip of Kungsholmen island, next to Riddarfjärden's northern shore and facing the islands of Riddarholmen and Södermalm. It houses offices and conference rooms as well as ceremonial halls, and the luxury restaurant Stadshuskällaren. It is the venue of the Nobel Prize banquet and is one of Stockholm's major tourist attractions.

In 1907 the city council decided to build a new city hall at the former site of Eldkvarn. An architectural contest was held which in the first stage resulted in the selection of drafts by Ragnar Östberg, Carl Westman, Ivar Tengbom jointly with Ernst Torulf, and Carl Bergsten. After a further competition between Westman and Östberg the latter was assigned to the construction of the City Hall, while the former was asked to construct Stockholm Court House. Östberg modified his original draft using elements of Westman's project, including the tower. During the construction period, Östberg constantly reworked his plans, resulting in the addition of the lantern on top of the tower, and the abandonment of the blue glazed tiles for the Blue Hall.

Oskar Asker was employed as construction leader and Paul Toll, of the construction company Kreuger & Toll, designed the foundations. Georg Greve also assisted in preparing the plans. The construction took twelve years, from 1911 to 1923. Nearly eight million red bricks were used. The dark red bricks, called "munktegel" (monks's brick) because of their traditional use in the construction of monasteries and churches, were provided by Lina brick factory near Södertälje. Construction was carried out by craftsmen using traditional techniques.

The site, adjacent to Stadshusbron, being bordered by the streets of Hantverkargatan and Norr Mälarstrand to the north and west, and the shore of Riddarfjärden to the south and east, allowed for a spacious layout. The building follows a roughly rectangular ground plan. It is built around two open spaces, a piazza called Borgargården on the eastern side, and the Blue Hall (Blå hallen) to the west.

The Blue Hall, with its straight walls and arcades, incorporates elements of a representative courtyard. Its walls are in fact without blue decorations, but it has kept its name after Östberg's original design. It is known as the dining hall used for the banquet held after the annual Nobel Prize award ceremony. The organ in the Blue Hall is with its 10,270 pipes the largest in Scandinavia. Above the Blue Hall lies the Golden Hall (Gyllene Salen), named after the decorative mosaics made of more than 18 million tiles. The mosaics make use of motifs from Swedish history. They were executed by the Berlin, Germany, firm of Puhl & Wagner (Gottfried Heinersdorff), after nine years of negotiations by Gottfried Heinersdorff (1883-1941) for the commission.

The southeast corner of the building, immediately adjacent to the shore, is marked by a monumental tower crowned by the Three Crowns, an old national symbol for Sweden. The tower is 106 metres high and is accessible by an elevator or by a stair of 365 steps. The eastern side of its base is decorated with a gold-plated cenotaph of Birger Jarl.

Stadshuset is considered one of Sweden's foremost examples of national romanticism in architecture. The unique site, overlooking Riddarfjärden, inspired a central motif of the construction, namely the juxtaposition of city architecture and water that also represents a central feature of Stockholm's cityscape as a whole. The architectural style is one of refined eclecticism, blending massive, austere, North European brick construction and playful elements reminiscent of oriental and venetian architecture, such as turrets adorned with golden starlets, decorated balconies, wooden masts, and statues.

The small park between the building and Lake Mälaren's shore is adorned with several sculptures, among them Carl Eldh's ensemble representing the three artists August Strindberg, Gustaf Fröding and Ernst Josephson, as well as Eldh's bronze sculptures "Sången" and "Dansen" ("The Song" and "The Dance"). To the south-east of the City Hall, facing Riddarholmen, is a pillar roughly 20 meters tall with a statue of Engelbrekt Engelbrektsson on top.

May ♍
Stadshust is one of the most iconic buildings of Stockholm city. Really cool to see where the Nobel prize banquet is held, along with several more historical stories. Such a beautiful inside-out site

StockholmOurWay
Really take the time to look around the outside of the City Hall. There are a lot of great statues around the building. This tree was planted the same year that the City Hall was inaugurated in 1923.

Daniel Bachmann
BEST VIEW on Stockholm for just 40 Kronen and 365 stairs with optional free elevator. My picture agrees with ildan that “A place where you can see a good view is also a good place to sit and dream!"

The Riddarholmen Church (Swedish: Riddarholmskyrkan) is the burial

The Riksdag (svenska. riksdagen or Sveriges riksdag) is the national

The Stockholm Court House (Swedish: Stockholms rådhus) is situated on

Opened in 1974, Kulturhuset (Swedish for The House of Culture) is a

Sergels torg (in English:Sergel's Square) is the most central public

The Seattle Public Library's Central Library is the flagship library 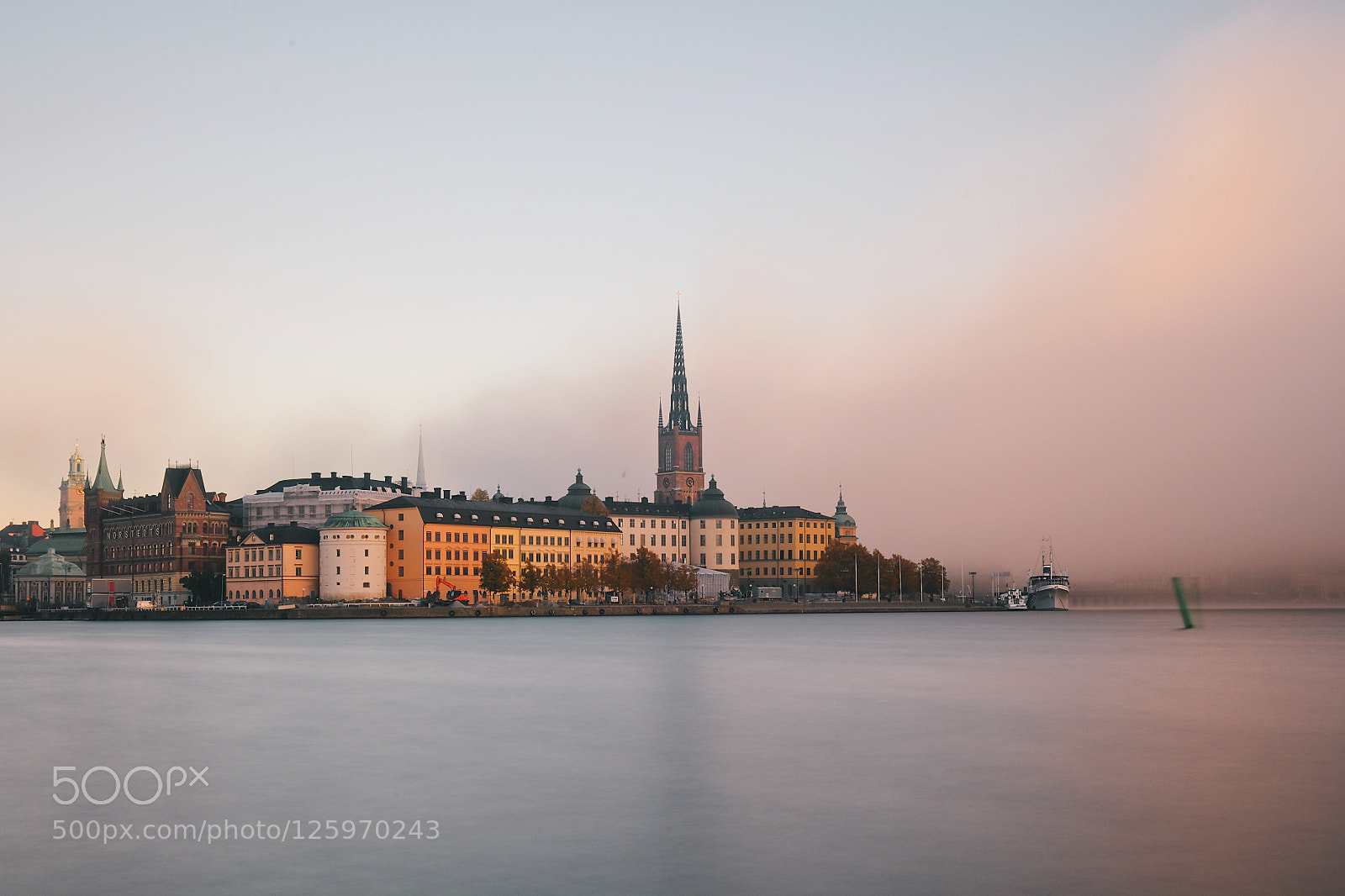 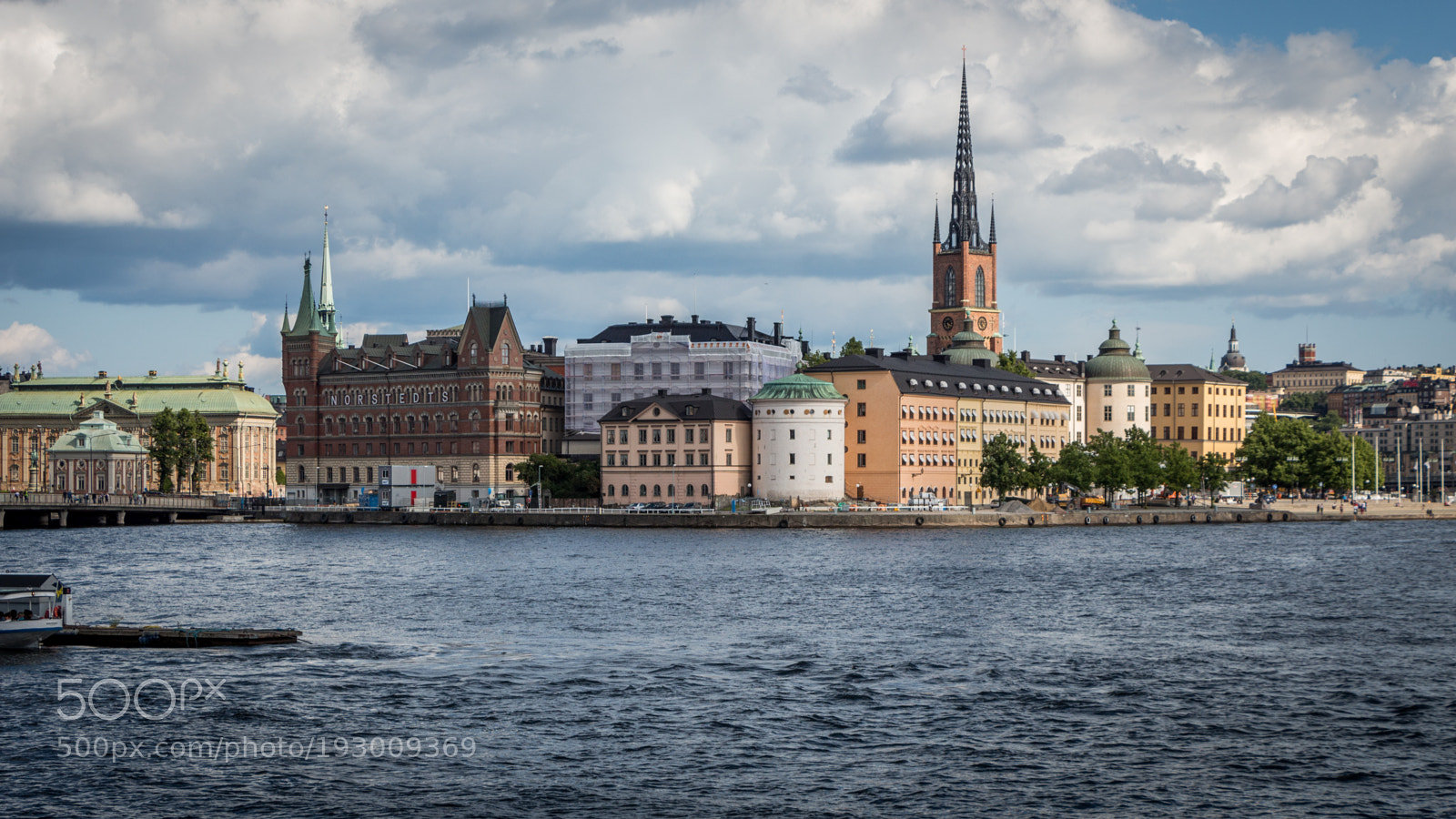 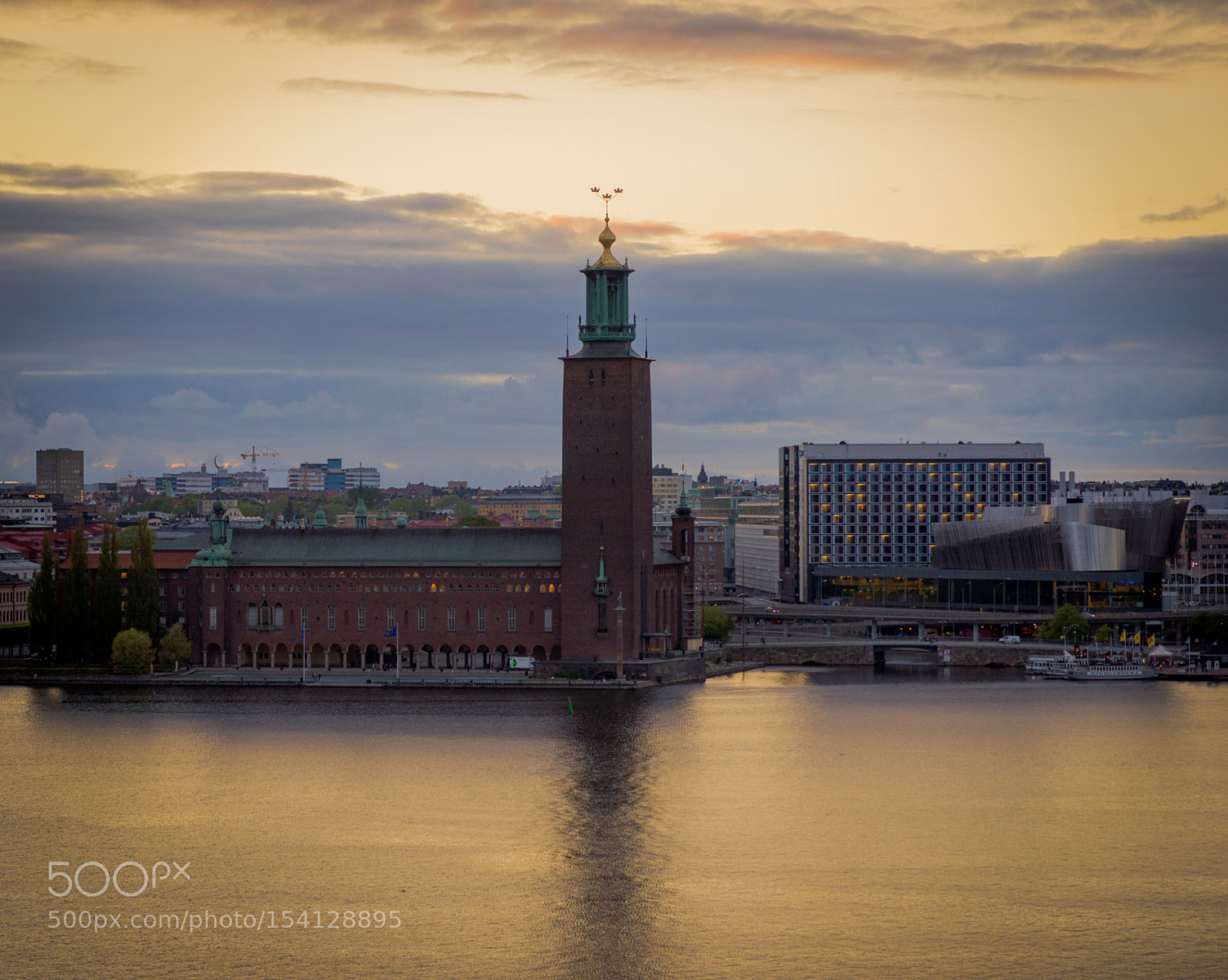 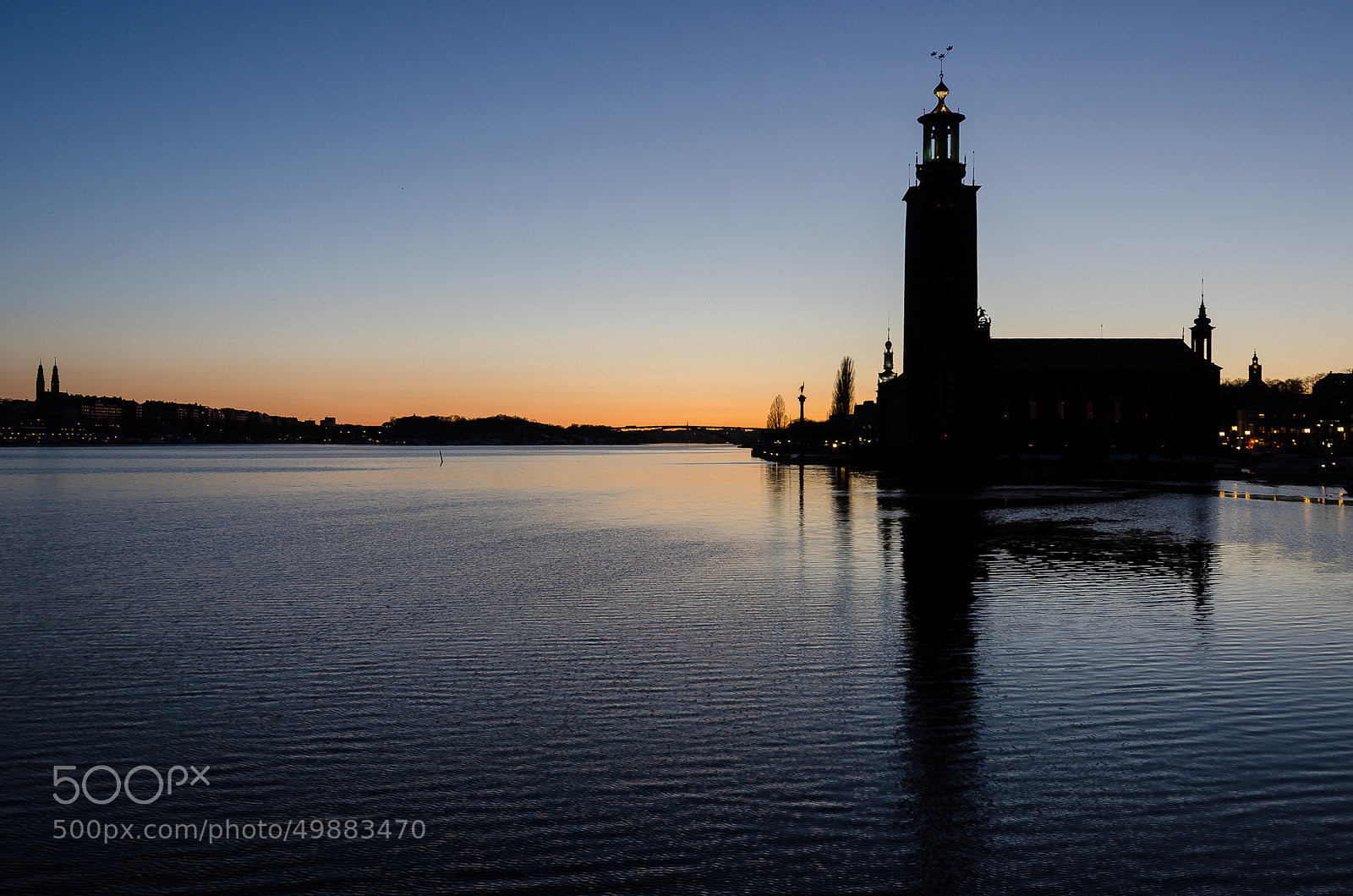 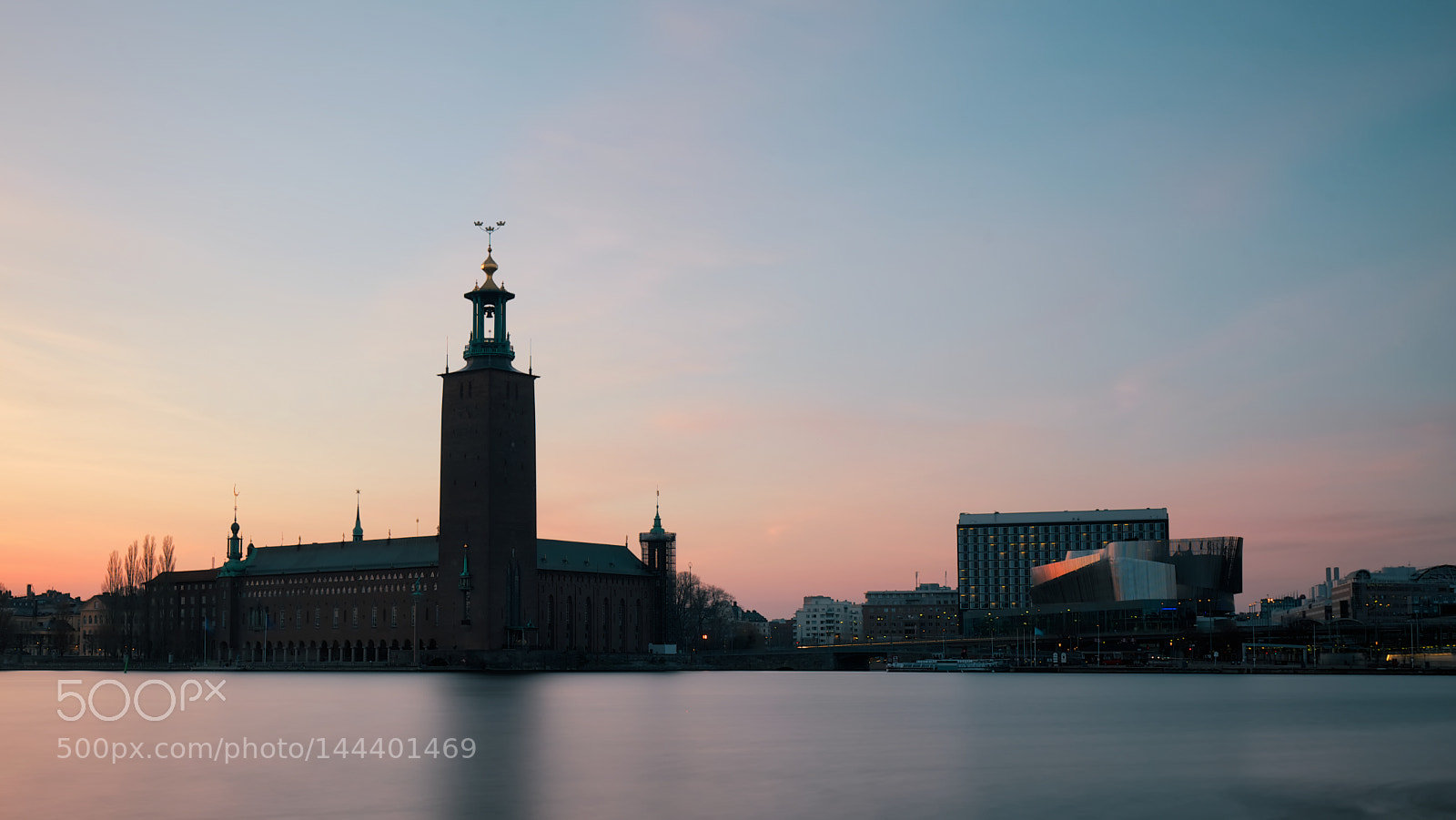 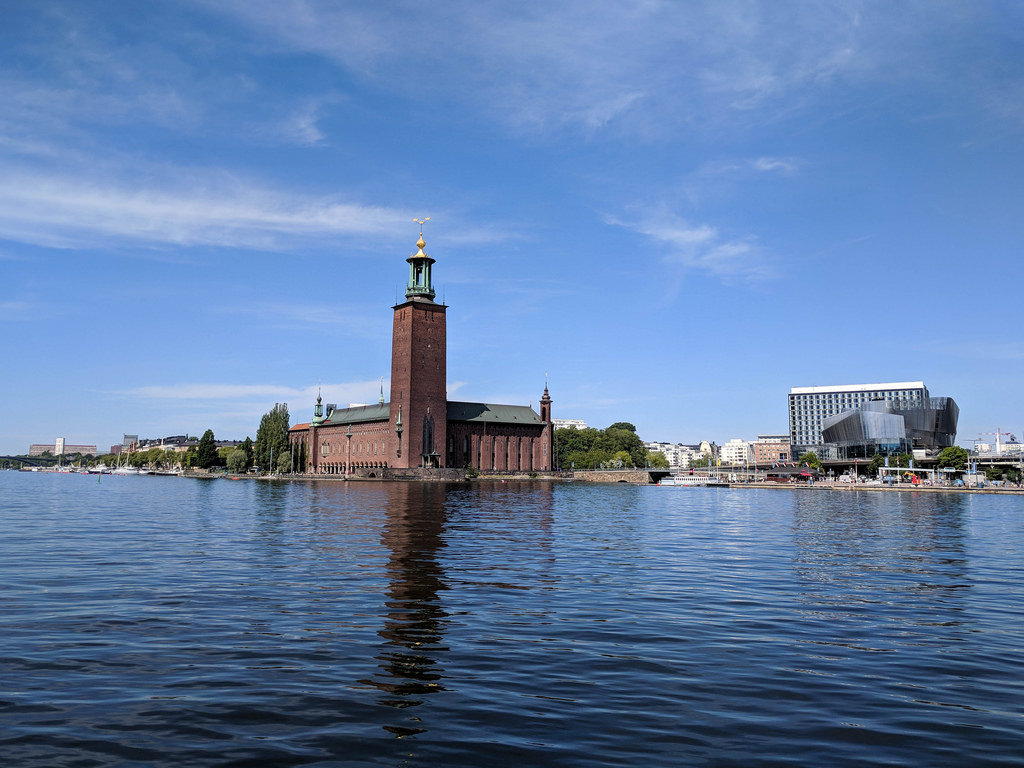 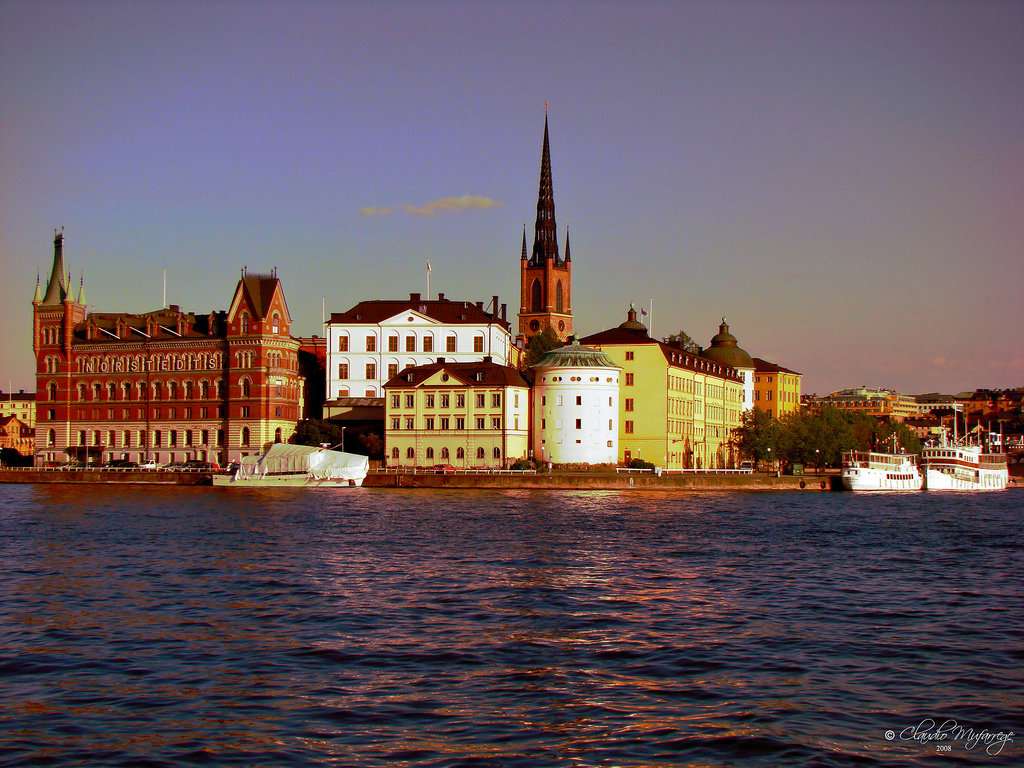 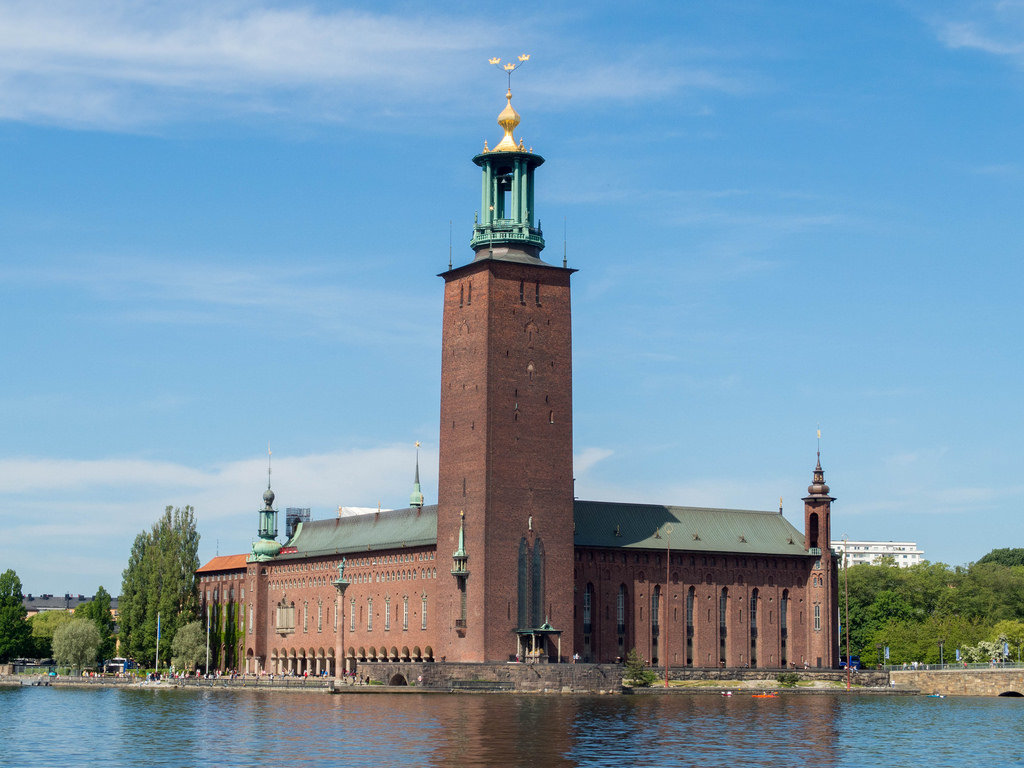 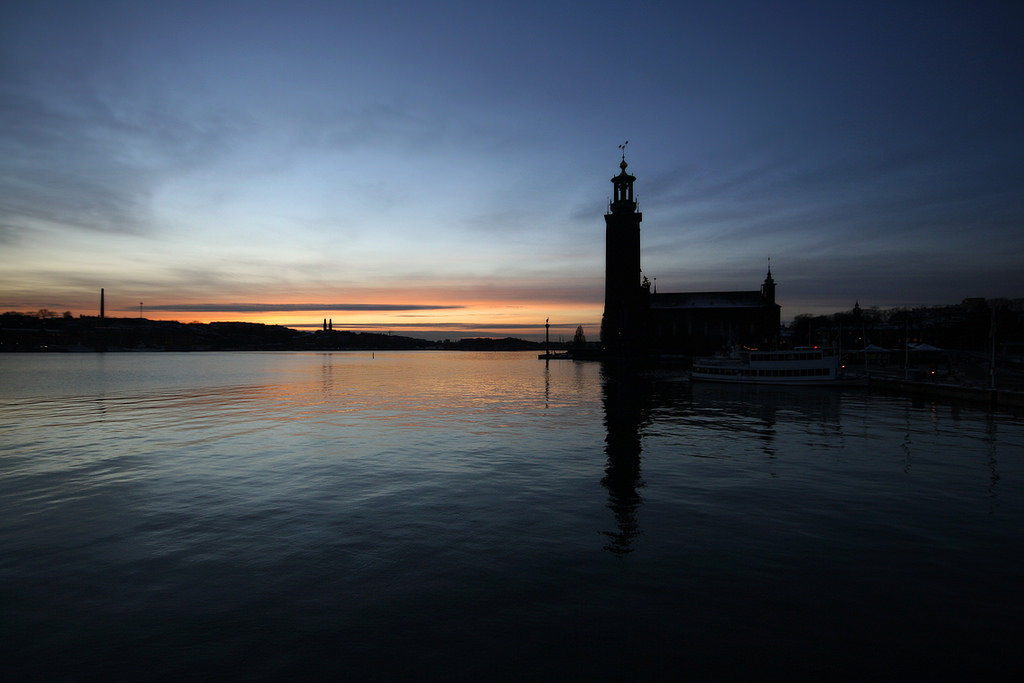 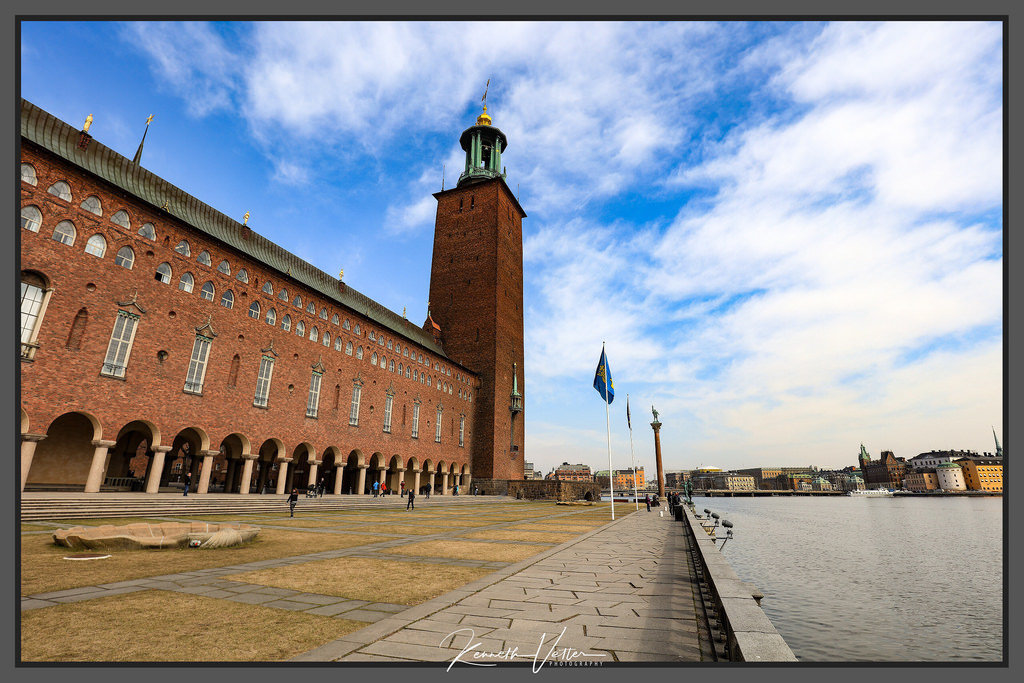 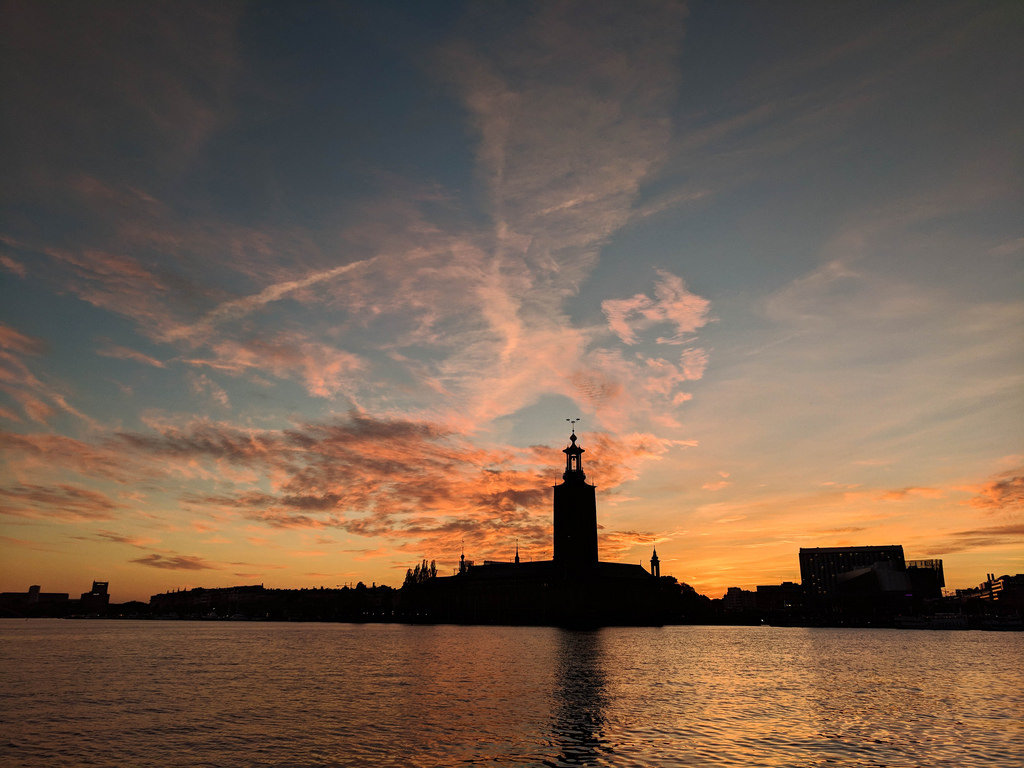 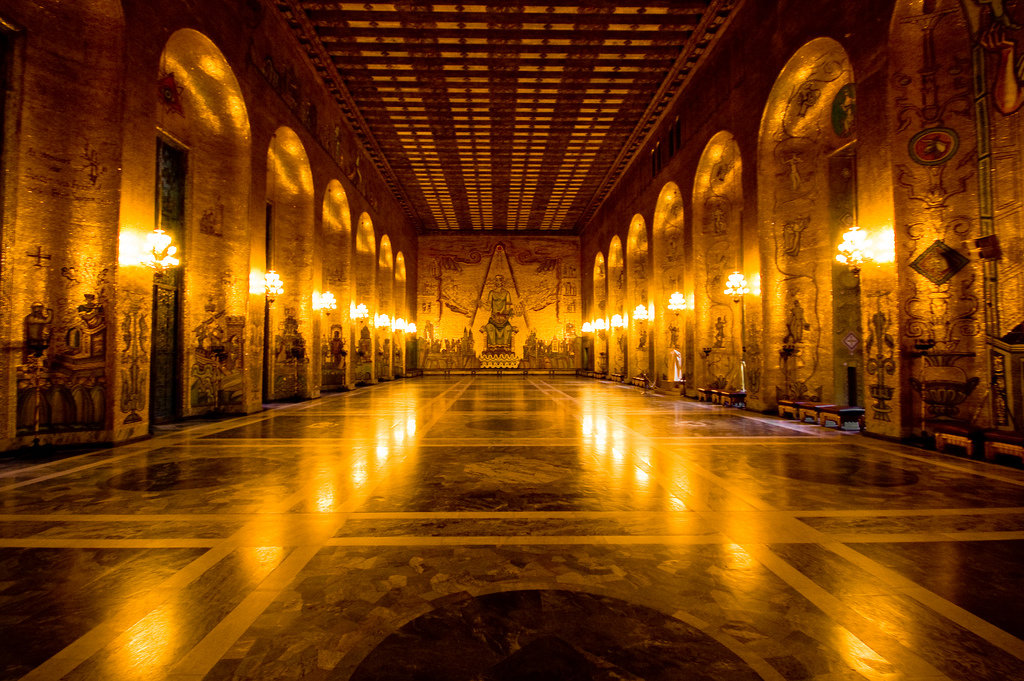 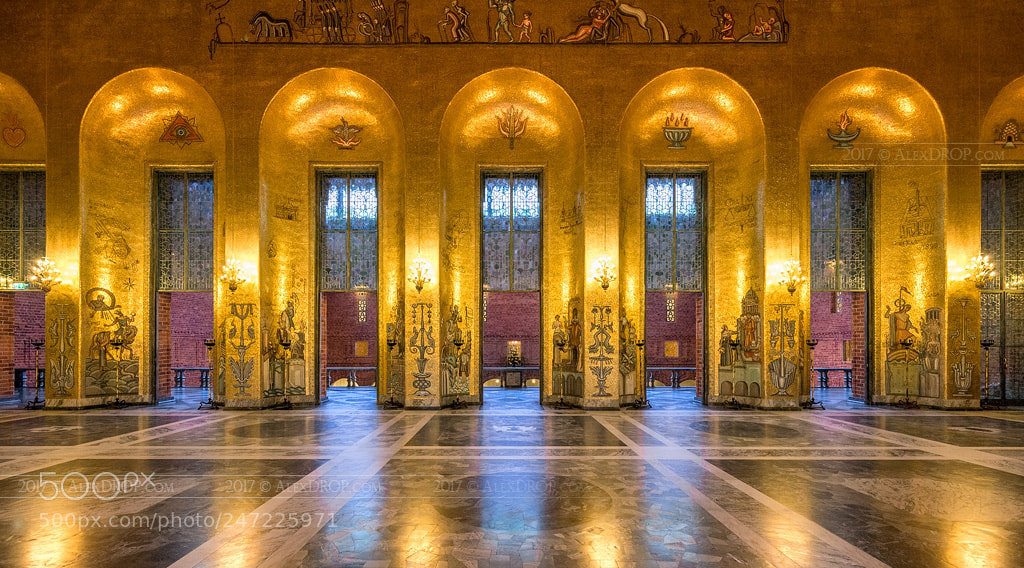