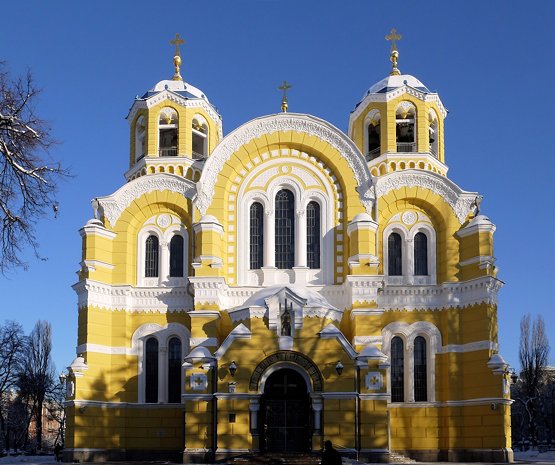 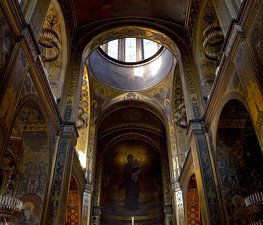 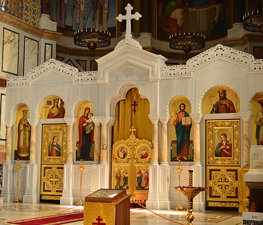 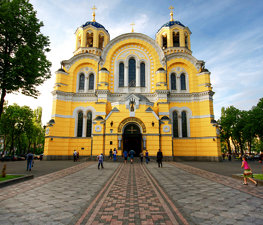 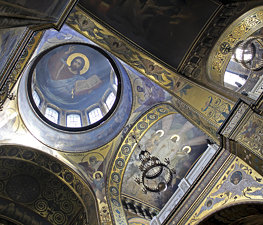 St Volodymyr's Cathedral (Ukranian: Патріарший кафедральний собор св. Володимира, Russian: Кафедральный собор Святого Владимира, Владимирский собор; also known as the Volodymyrsky Cathedral, Vladimirsky Cathedral, or St. Vladimir's Cathedral) is a cathedral in the centre of Kiev. It is one of the city's major landmarks and the mother cathedral of the Ukrainian Orthodox Church - Kiev Patriarchy, one of two major Ukrainian Orthodox Churches.

In 1852, metropolitan Philaret of Moscow suggested a large cathedral should be built in Kiev to commemorate the 900th anniversary of the baptism of Kievan Rus by prince Vladimir (Volodymyr) the Great of Kiev (St. Vladimir). People from all over the Russian Empire started donating to this cause, so that by 1859 the cathedral fund had amassed a huge sum of 100,000 rubles. The Kiev Pechersk Lavra (Monastery of the Caves) produced one million bricks and presented them to the cathedral as well. The design was executed in delightful Byzantine style initially by the architects I. Schtrom, P. Sparro, R. Bemhardt, K. Mayevsky, V. Nikolayev. The final version of the design belongs to A. Beretti. It is a traditional six-piered, three-apsed temple crowned by seven cupolas. The height to the cross of the main dome is 49 meters.

It is the cathedral's colourful interior that particularly strikes the eye. Mosaics were executed by masters from Venice. Frescoes were created under the guidance of Professor A. Prakhov by a group of famous painters: S. Kostenko, V. Kotarbinsky, M. Nesterov, M. Pymonenko, P. Swedomsky, V. Vasnetsov, M. Vrubel, V. Zamyraylo, and others. The painting of the Holy Mother of God by Vasnetsov in the altar apse of the cathedral impresses by its austere beauty, being one of the world masterpieces of fine art.

The entrance door is adorned with relief bronze sculptures of St. Olga (Princess Olga of Kiev) by sculptor R. Bakh and St. Vladimir (sculptor H. Zaieman) against a blue background. The iconostasis is carved from the white marble brought from Carrara. The cathedral was completed in 1882, however, the paintings were fully finished only in 1896 ([1]).

Some works by Viktor Vasnetsov

The cathedral might have been damaged during the Polish-Soviet War in 1920[2]. During the Soviet times, the cathedral barely escaped demolition, but not closure. Until the World War II a museum of religion and atheism existed there. The relics of St Barbara, a martyr of the 3rd century AD, which were transferred to St Volodymyr's from the Mykhailivsky Zlatoverkhy Cathedral before it was destroyed by the Bolsheviks ([3]) and remain there since. After the war the cathedral was opened and has not been closed since. During that time it was the main church of the Kiev Metropolitan See of the Ukrainian Exarchate. Unlike other churches which saw restrictions on entry for tourists, the cathedral was one of the few places in the USSR where tourists could openely visit a working Orthodox Church. It seen the revival of Orthodox religion in 1988 when the millennium celebration of the Baptism of Kiev marked a turn in the Soviet policy of religion.

Spiritual leaders of the Ukrainian Orthodox Church of Kiev Patriarchy have been conducting religious services and prayers in St. Volodymyr's Cathedral to this day. All the ceremonies are conducted in Ukrainian, accompanied during religious holidays by the magnificent singing of one of the best church chorals. The choral is often joined by opera singers, providing an unforgettable listening and spiritual experience to St Volodymyr's visitors.

InterContinental Kiev
The cathedral itself is designed in Old Byzantine syle. The inside frescos will leave an everlastin impression. Get ready to be allured by the vibrant colors and ceremonies.

There are several Botanical Gardens in Kiev, the capital of Ukraine.

Museum of Western and Oriental Art in Kiev, also known as the Bogdan 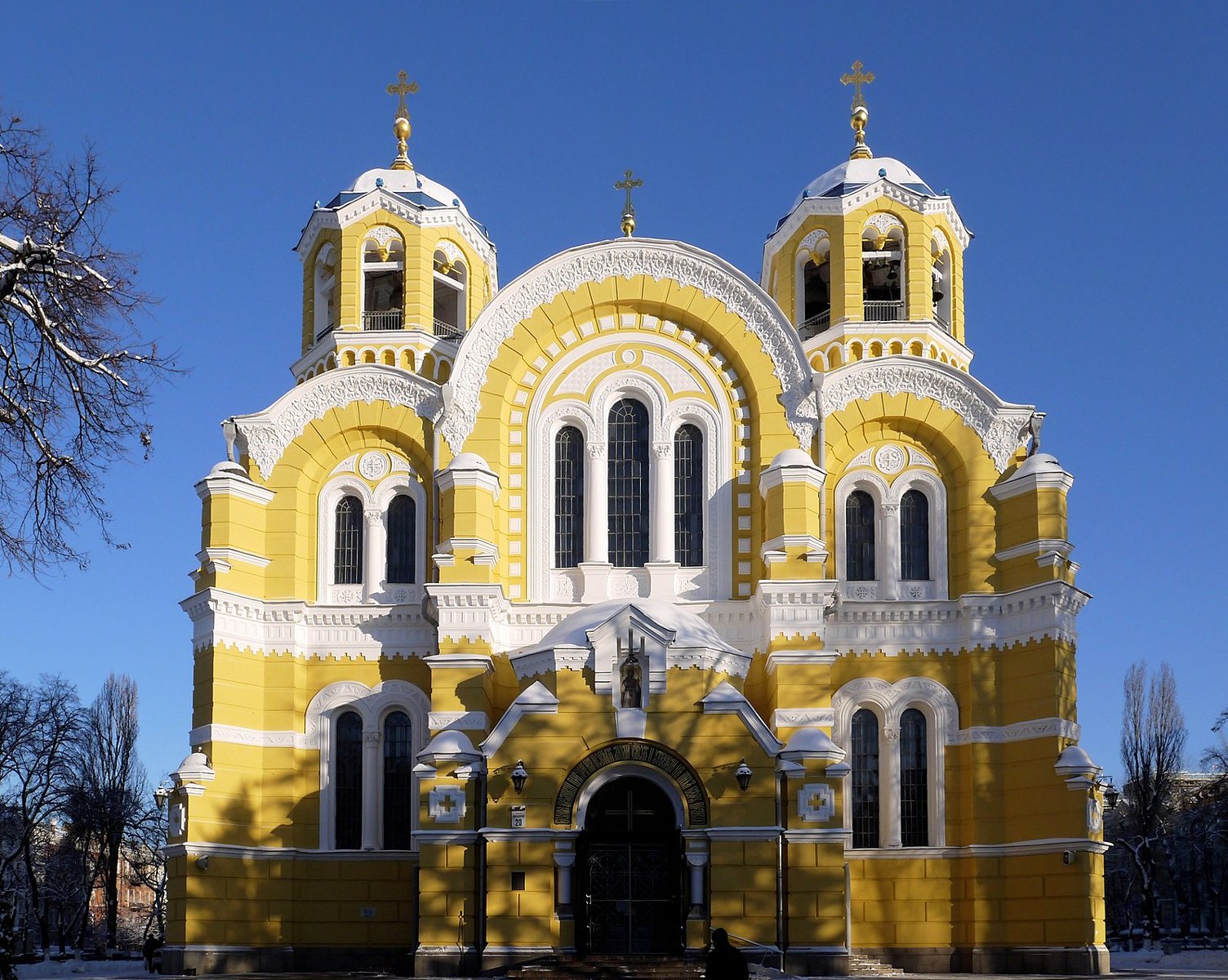 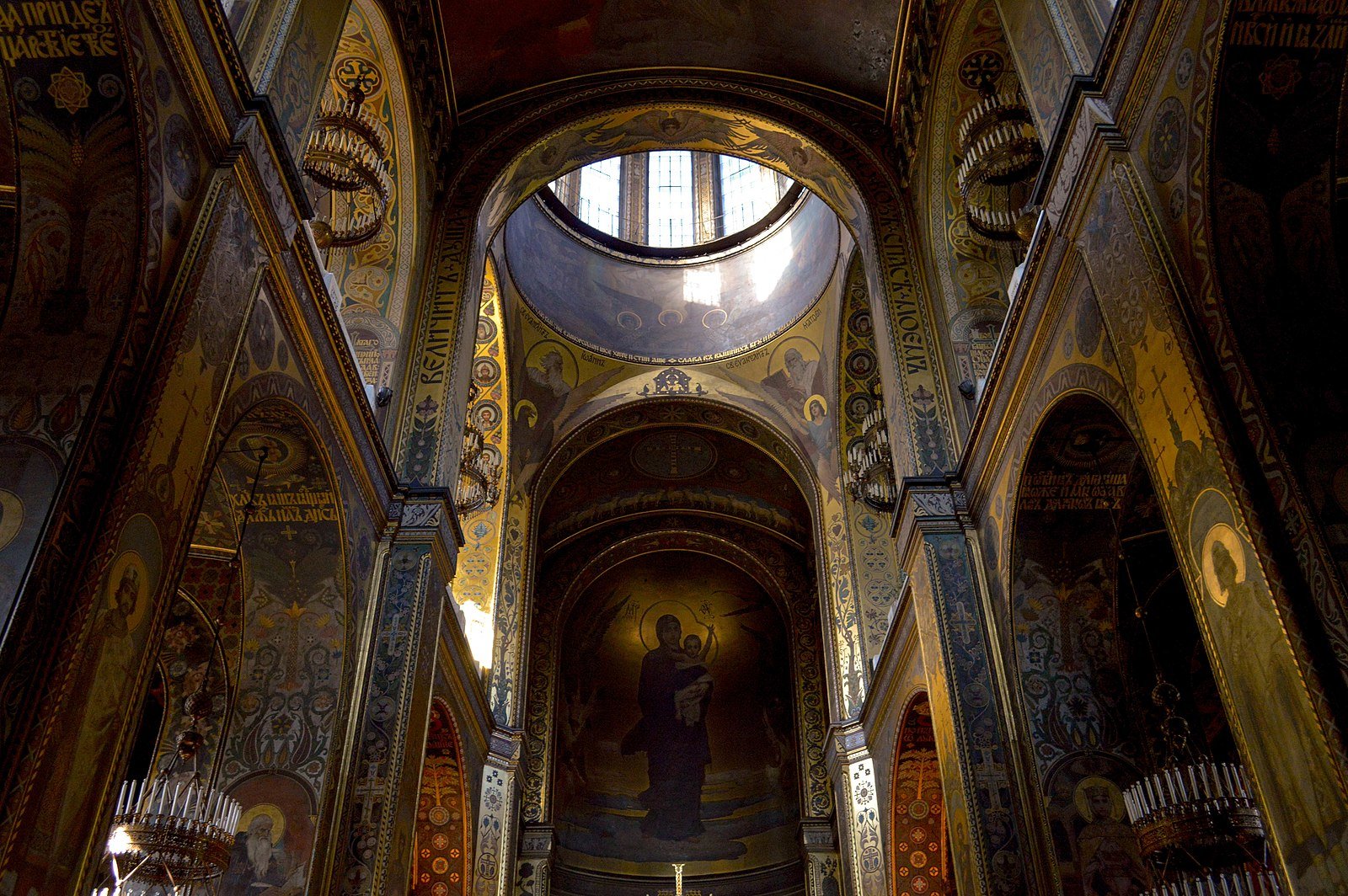 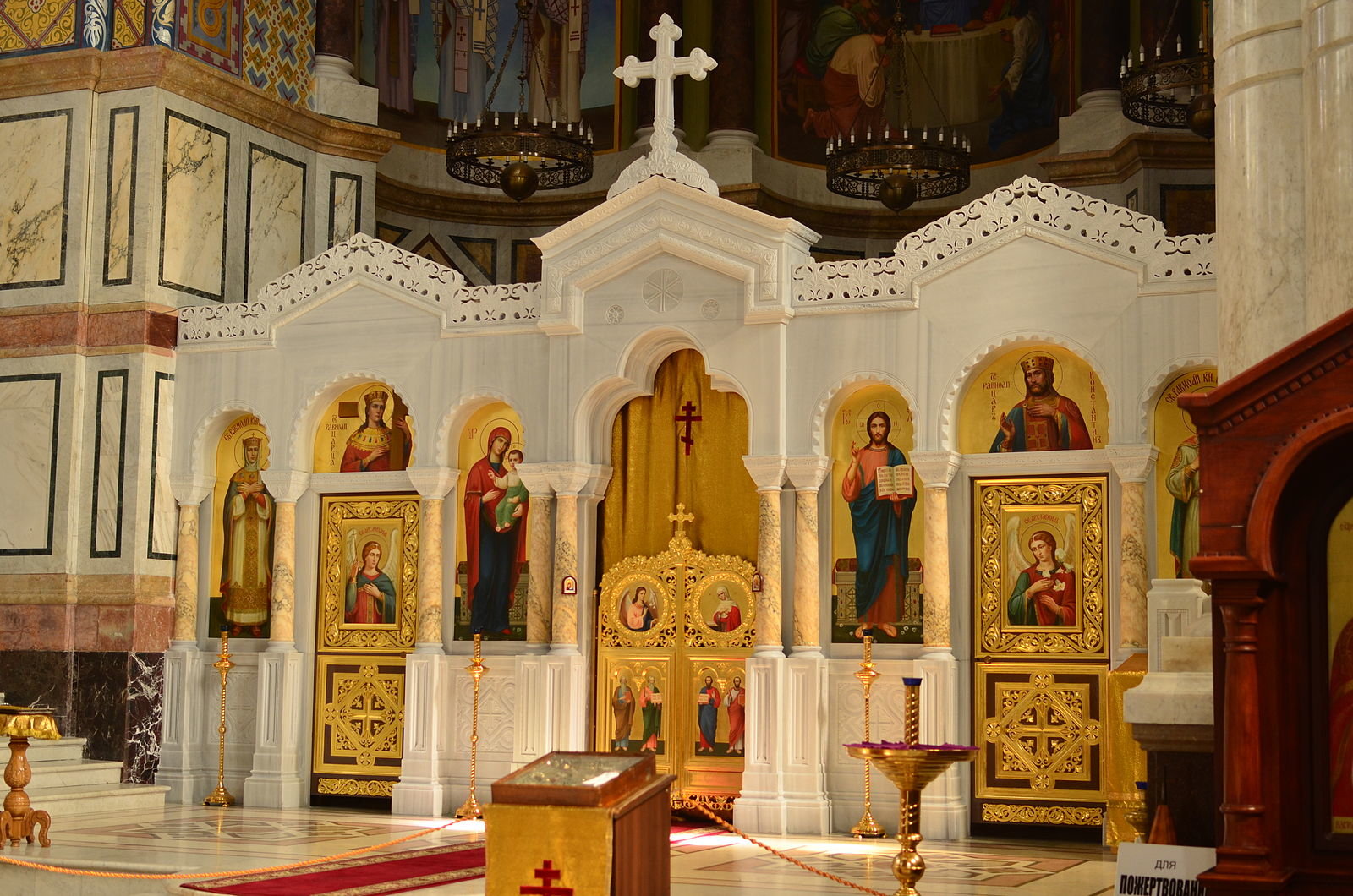 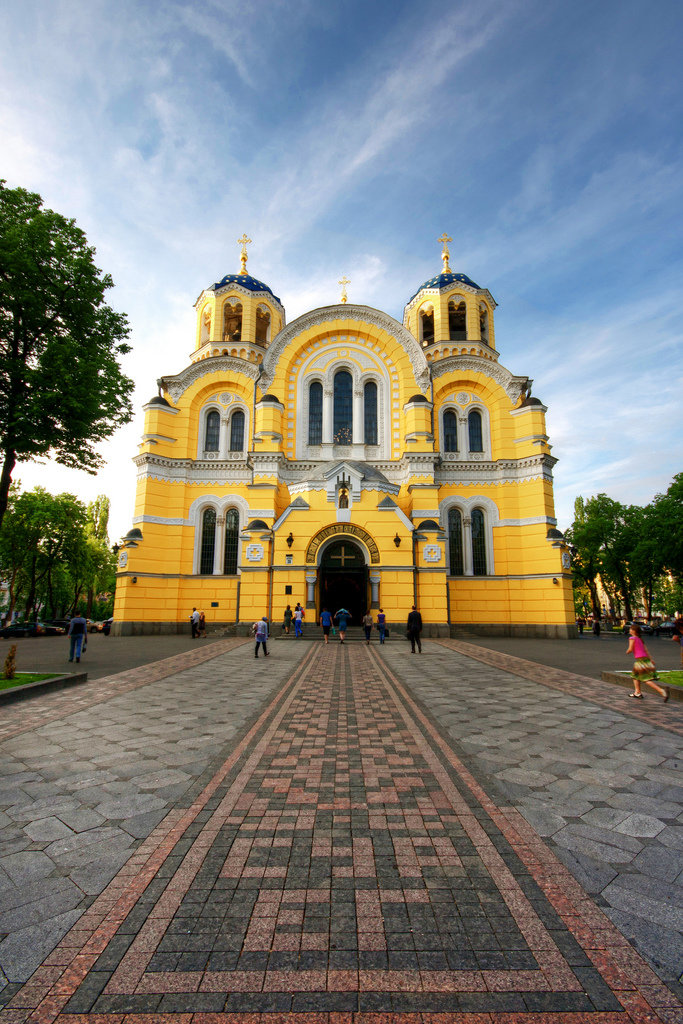 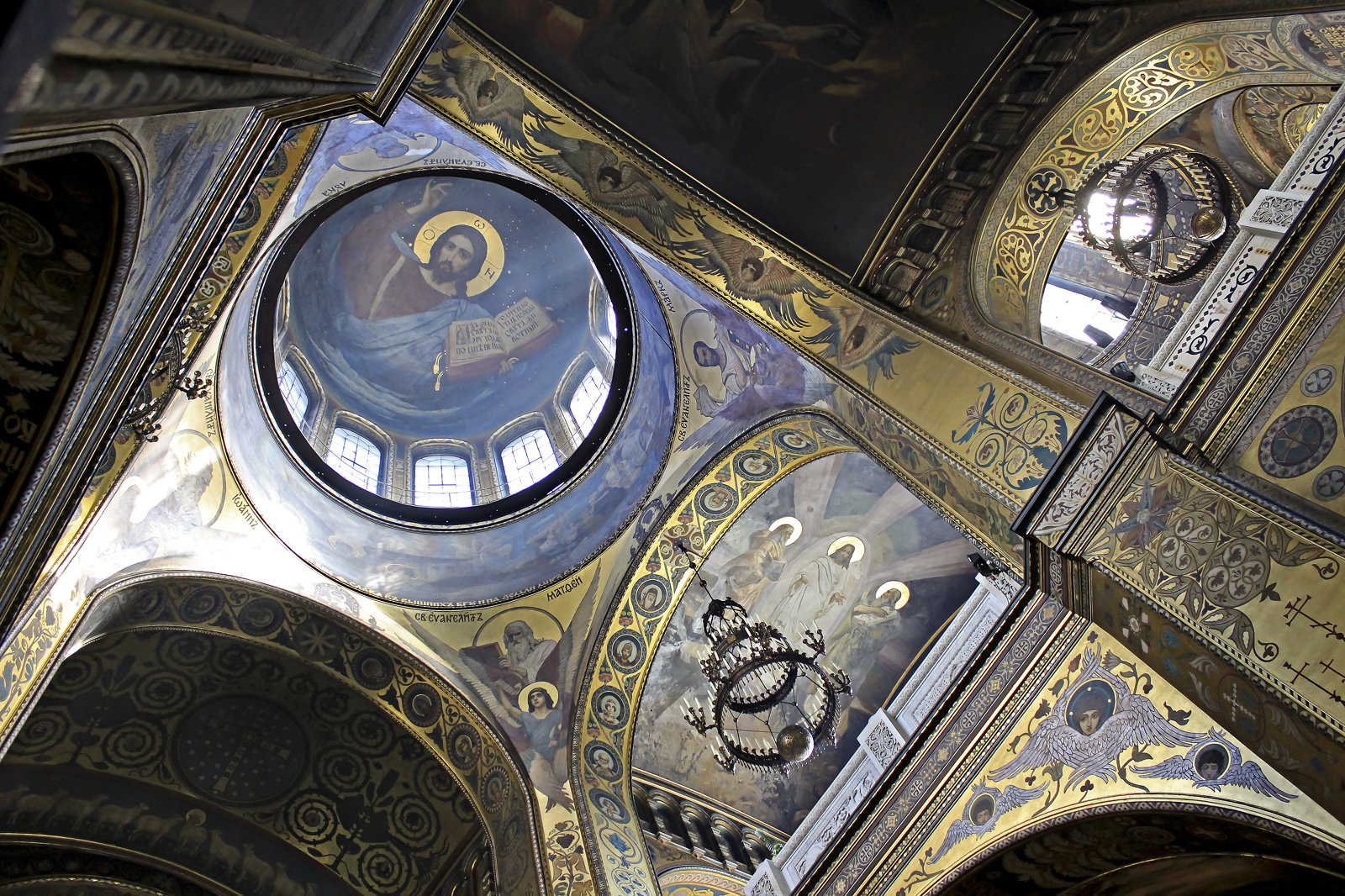 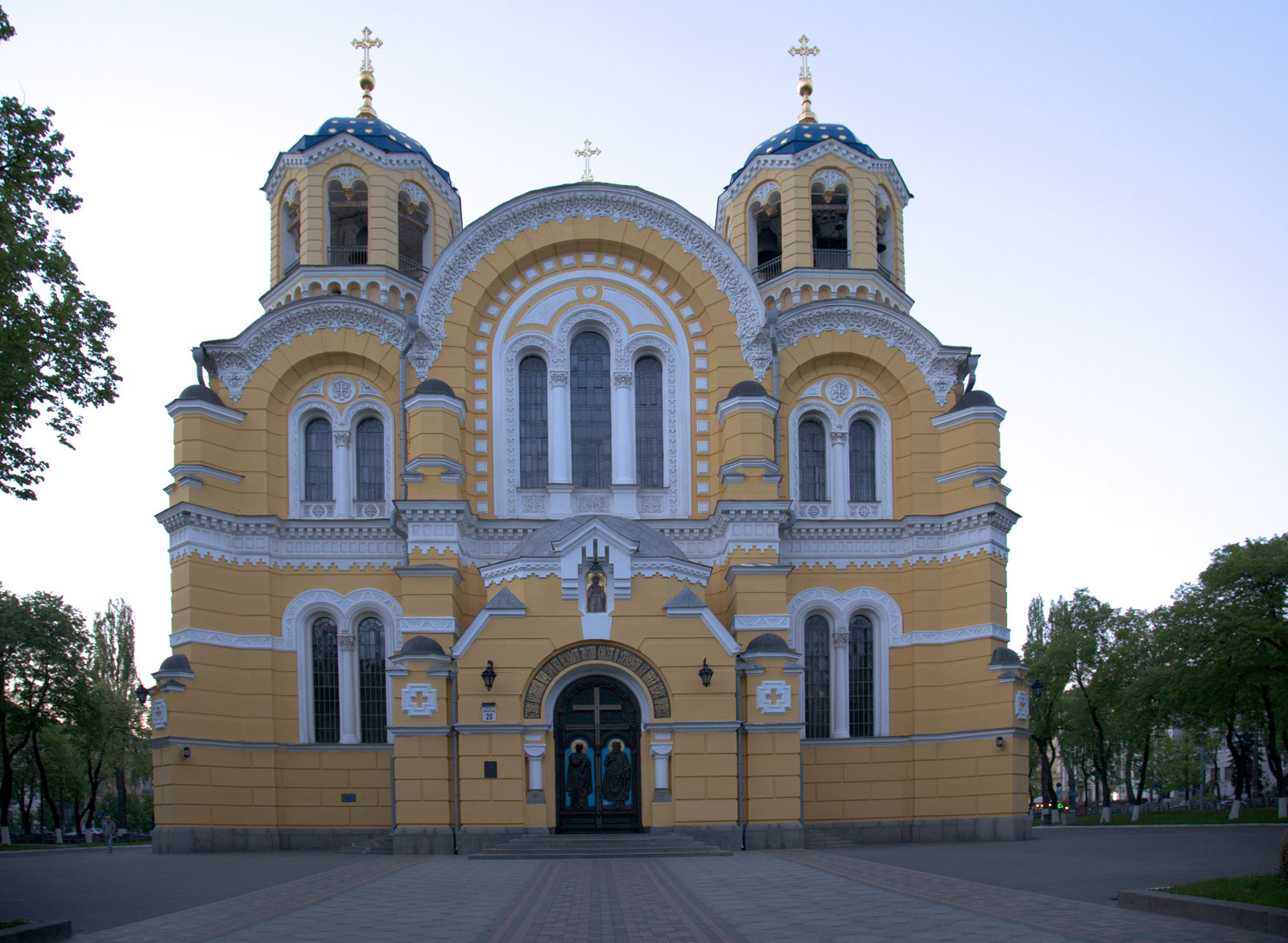 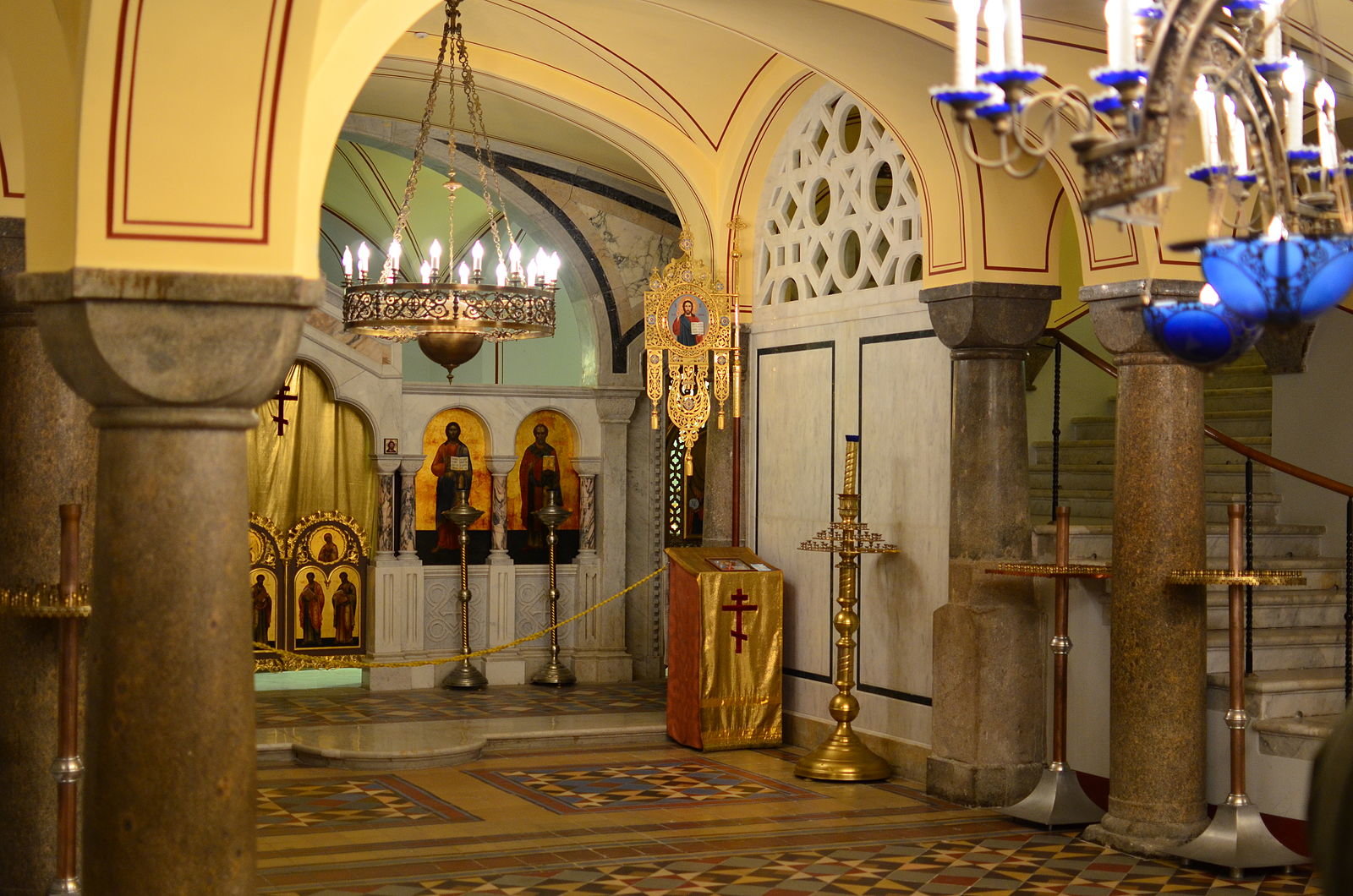 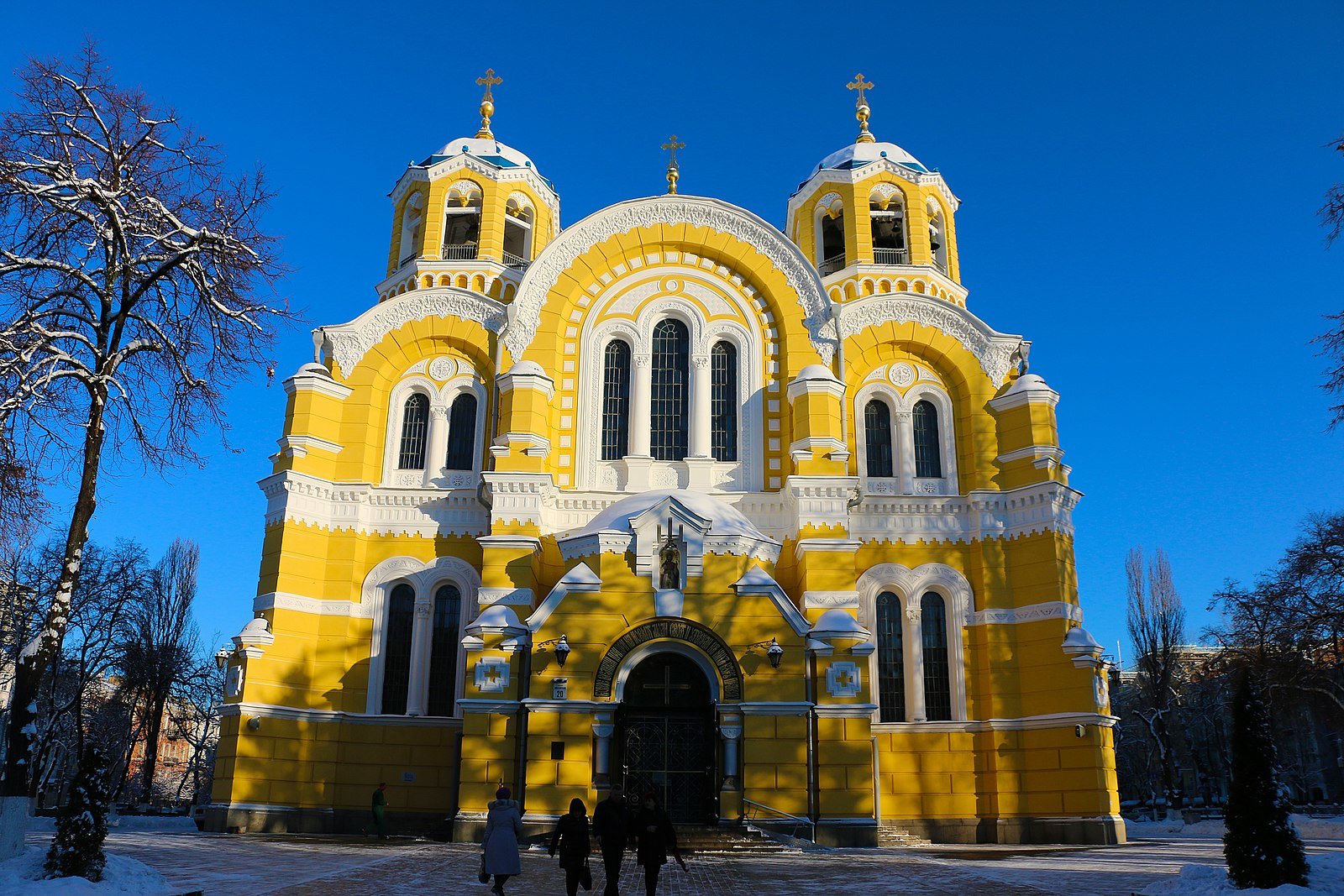 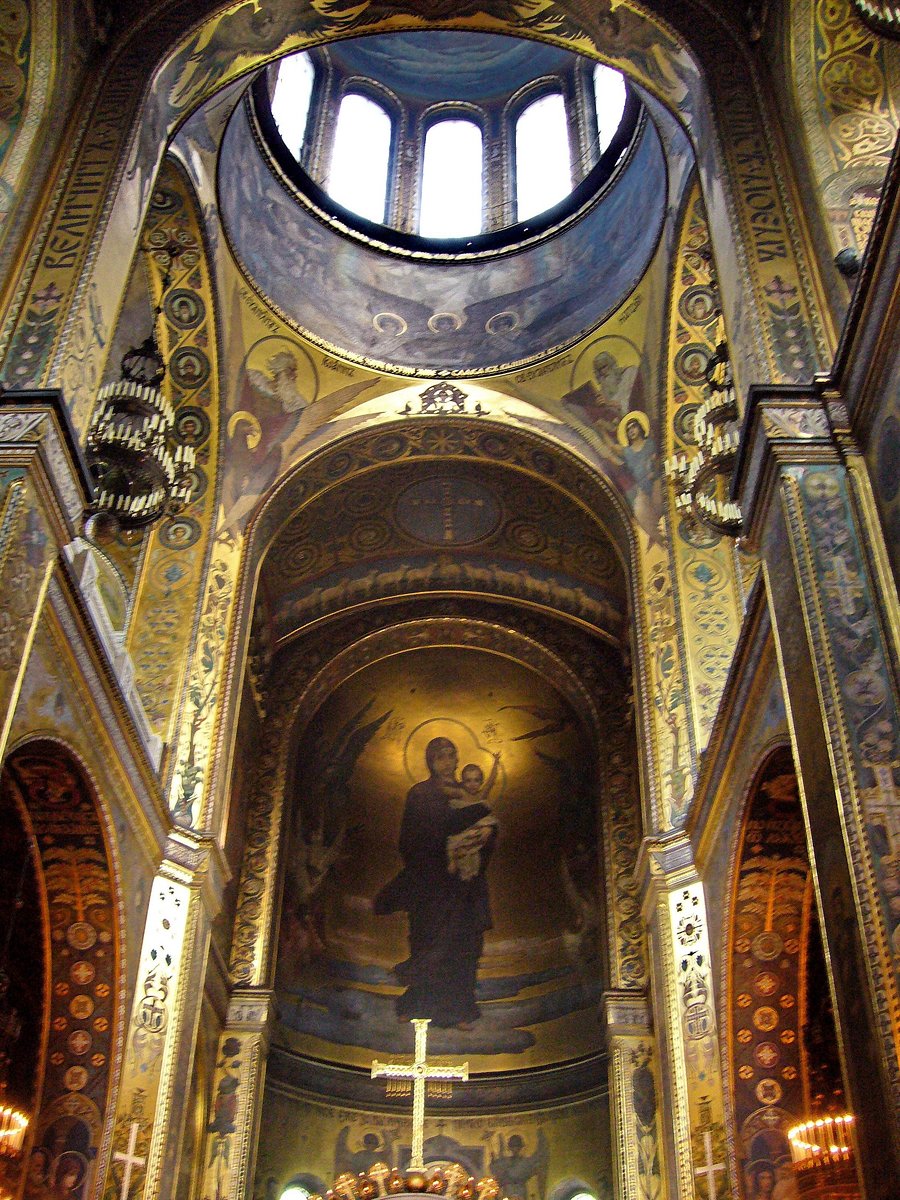 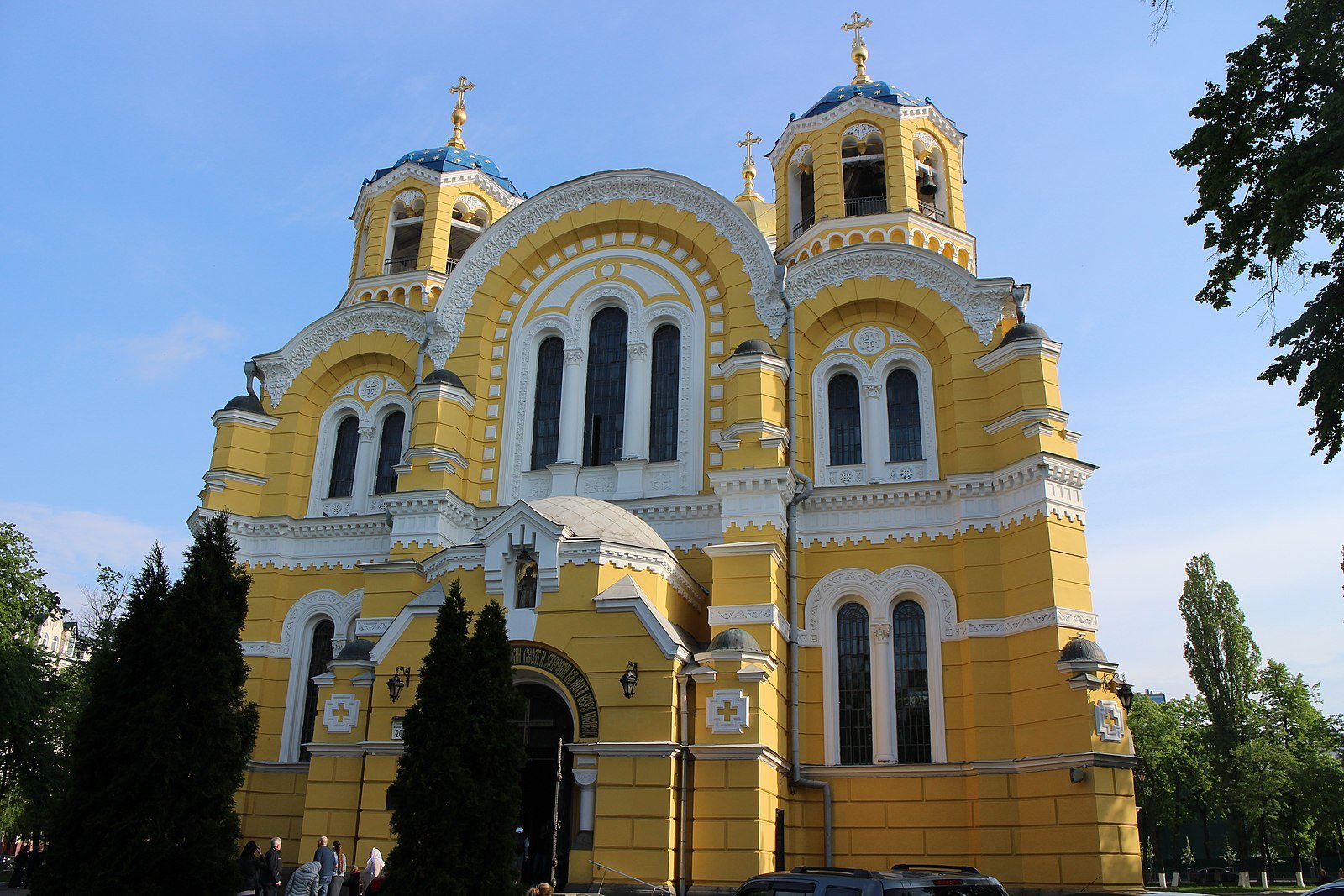 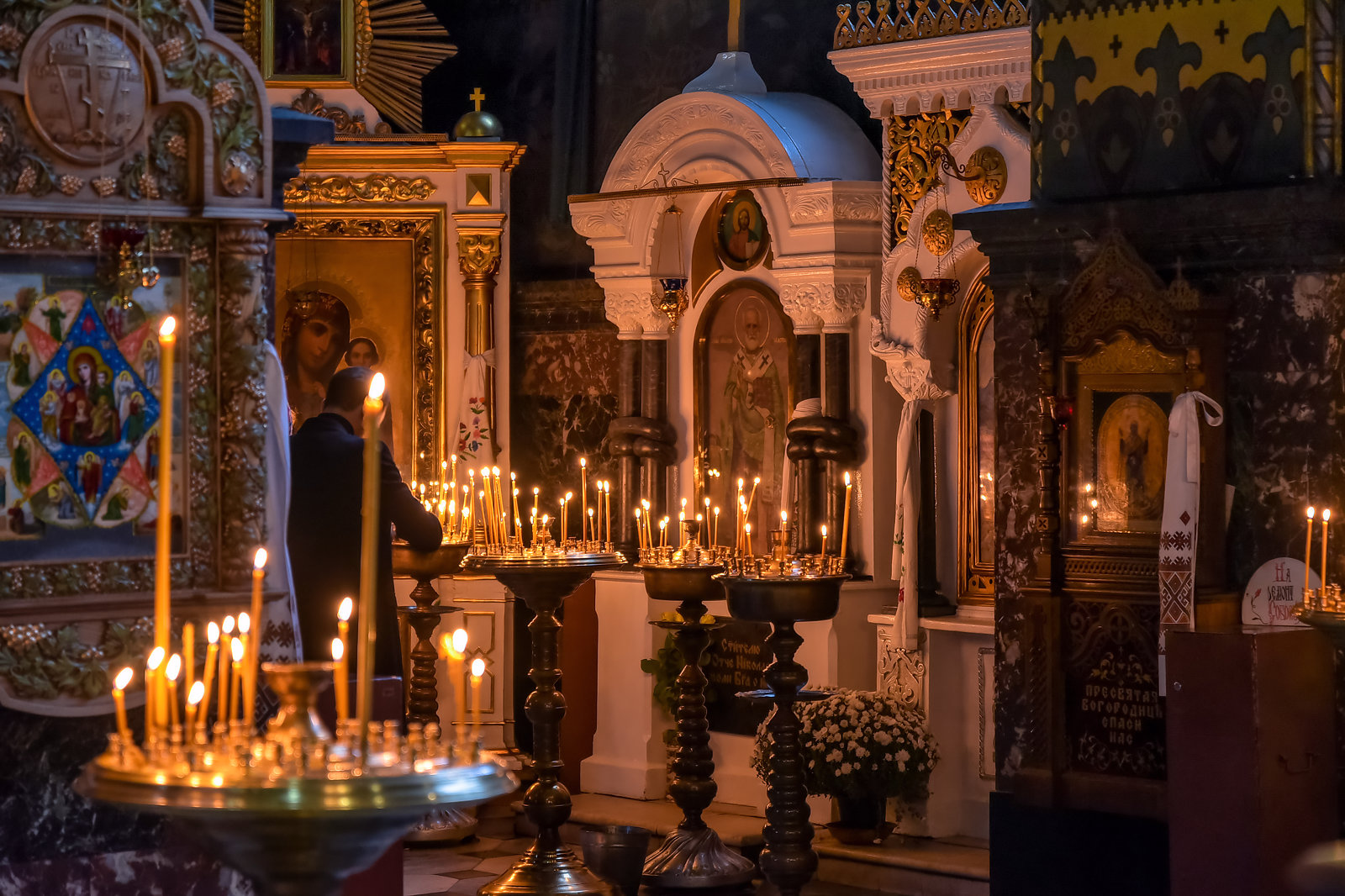 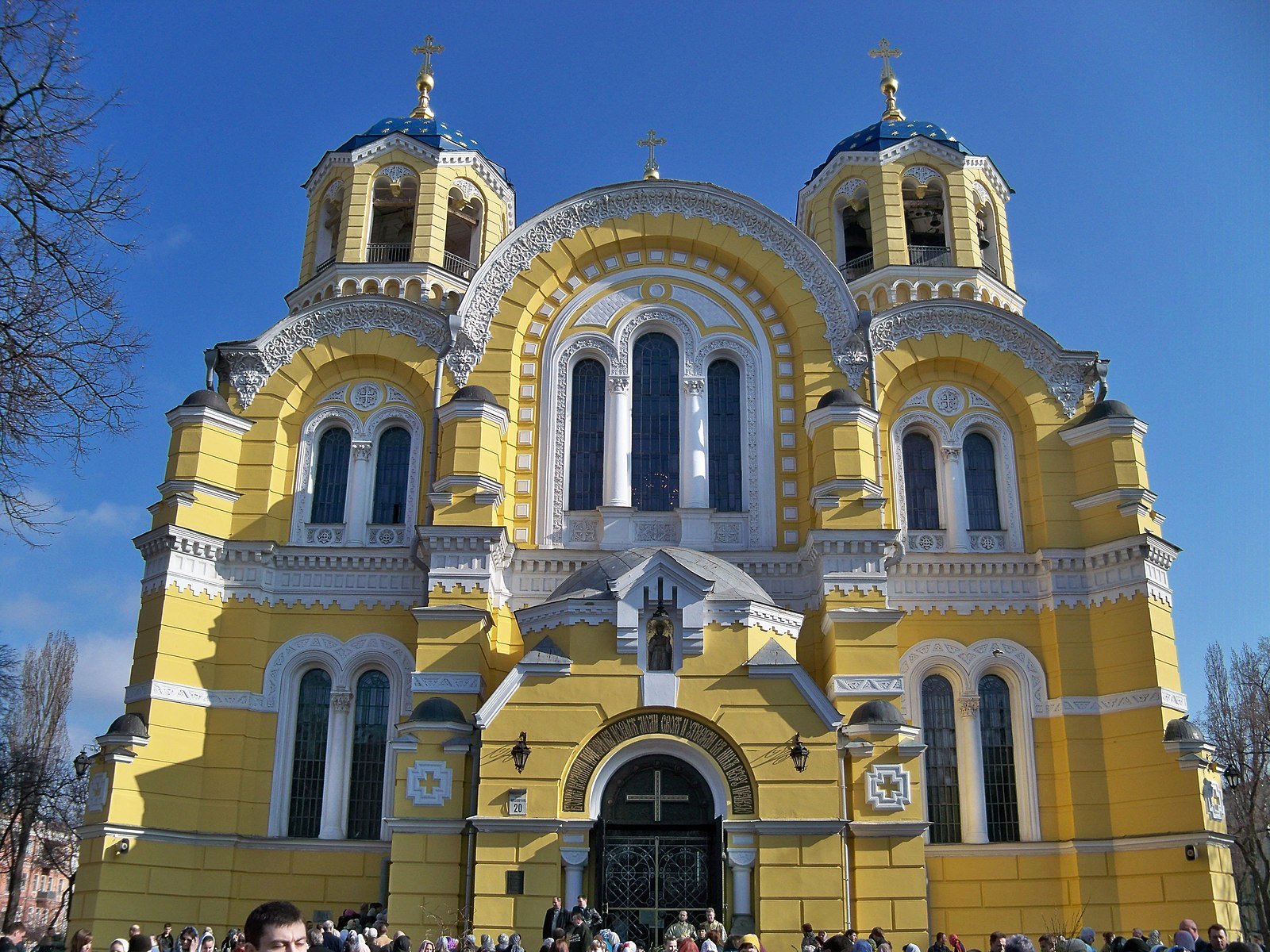 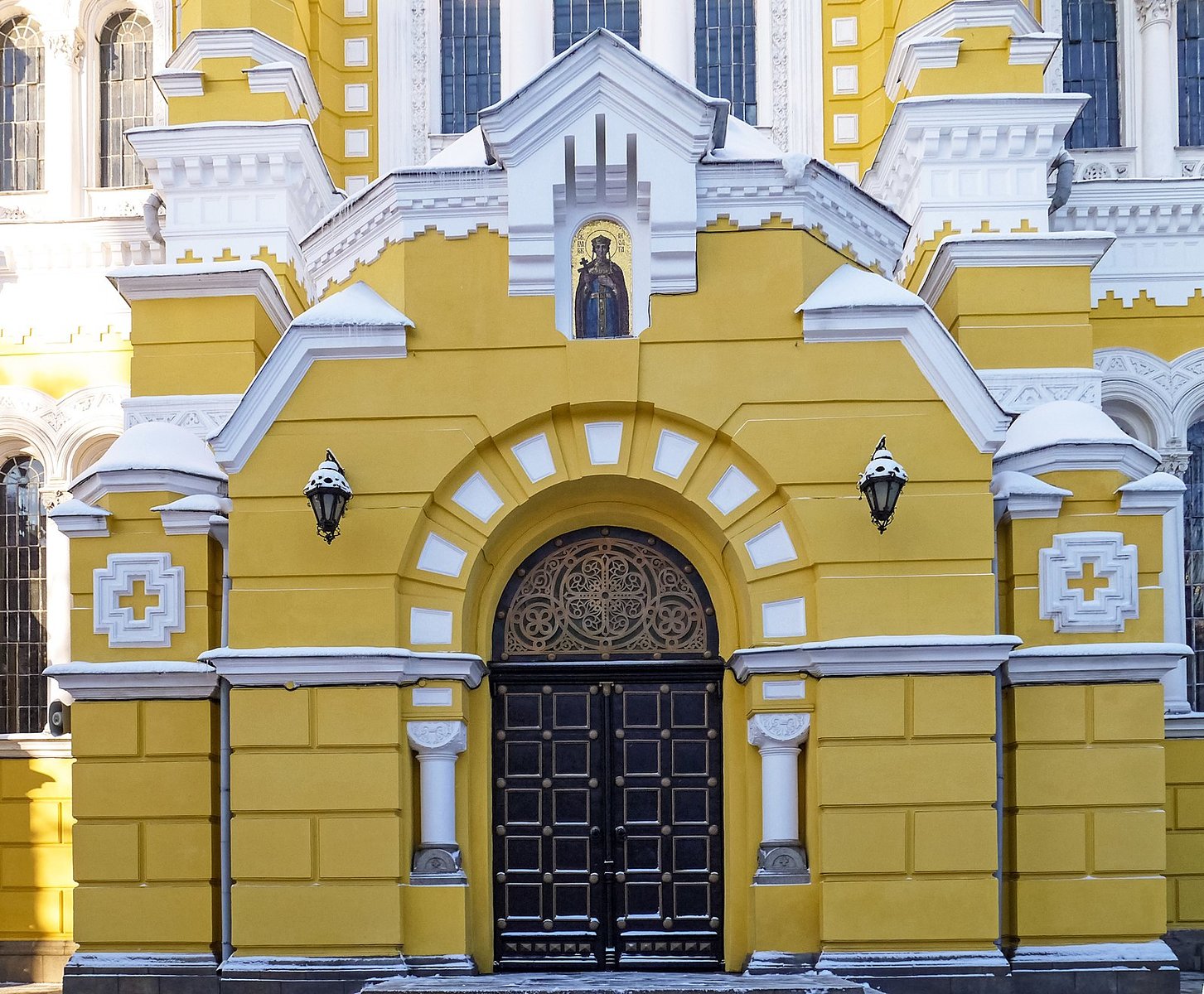 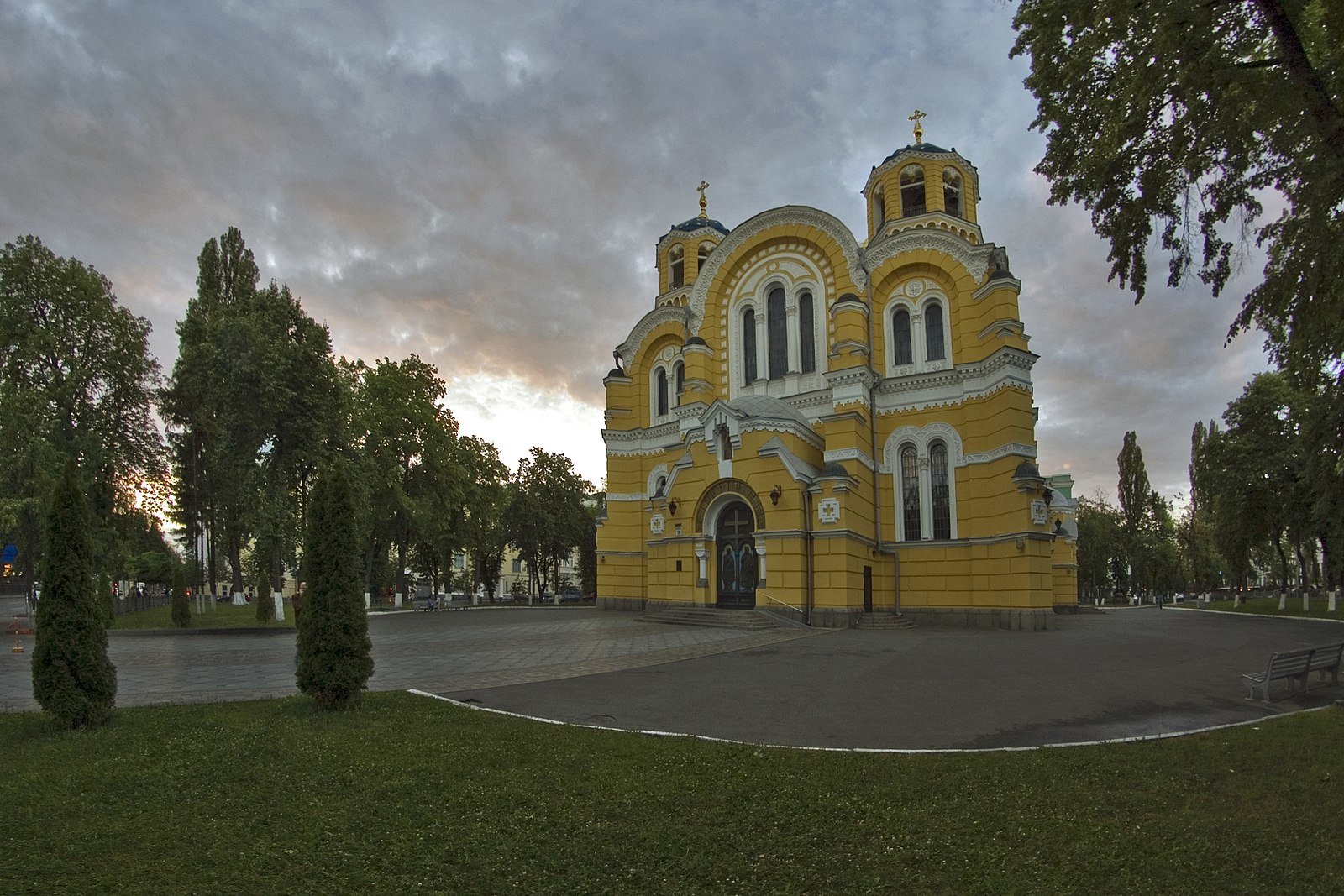 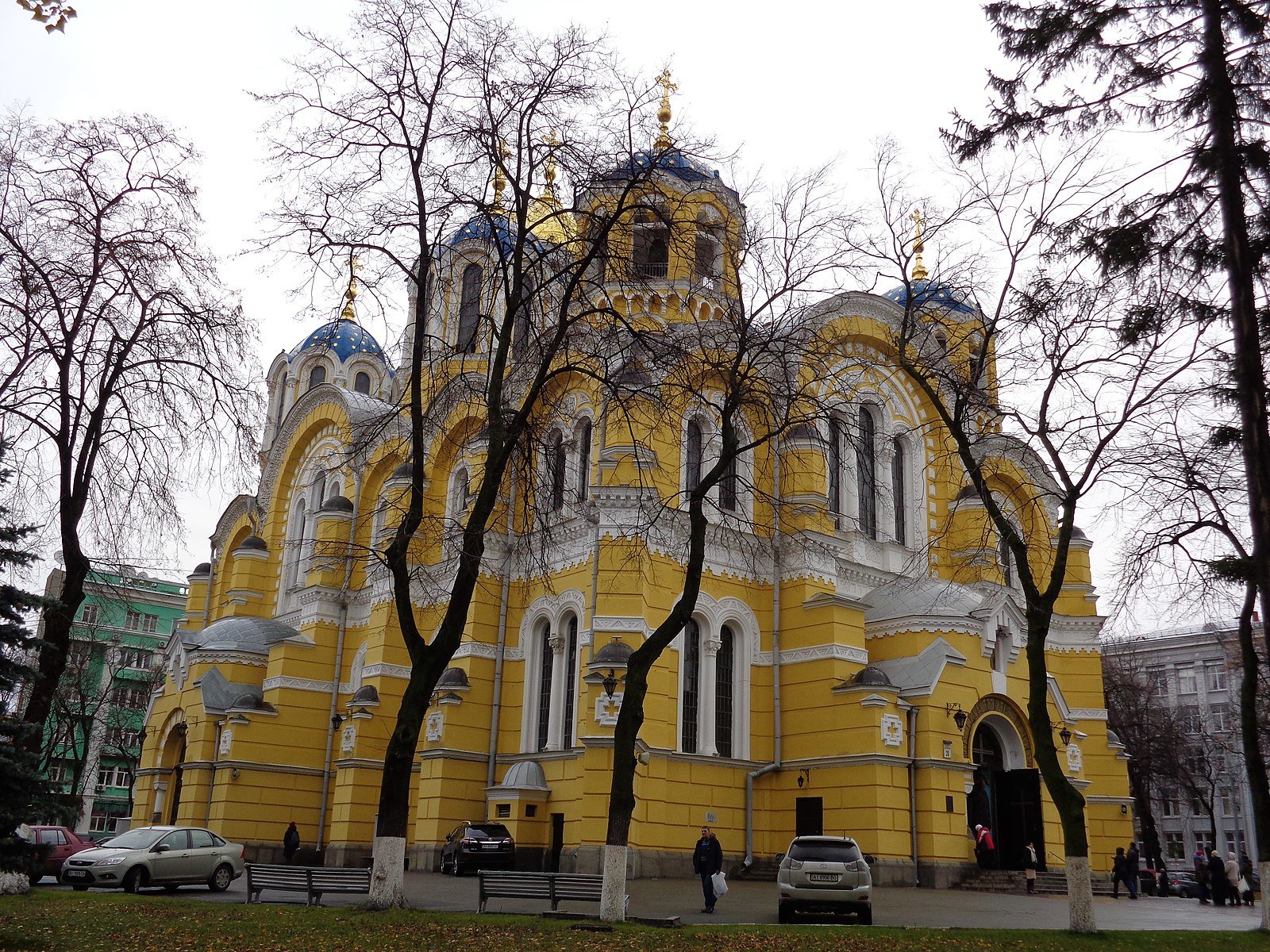 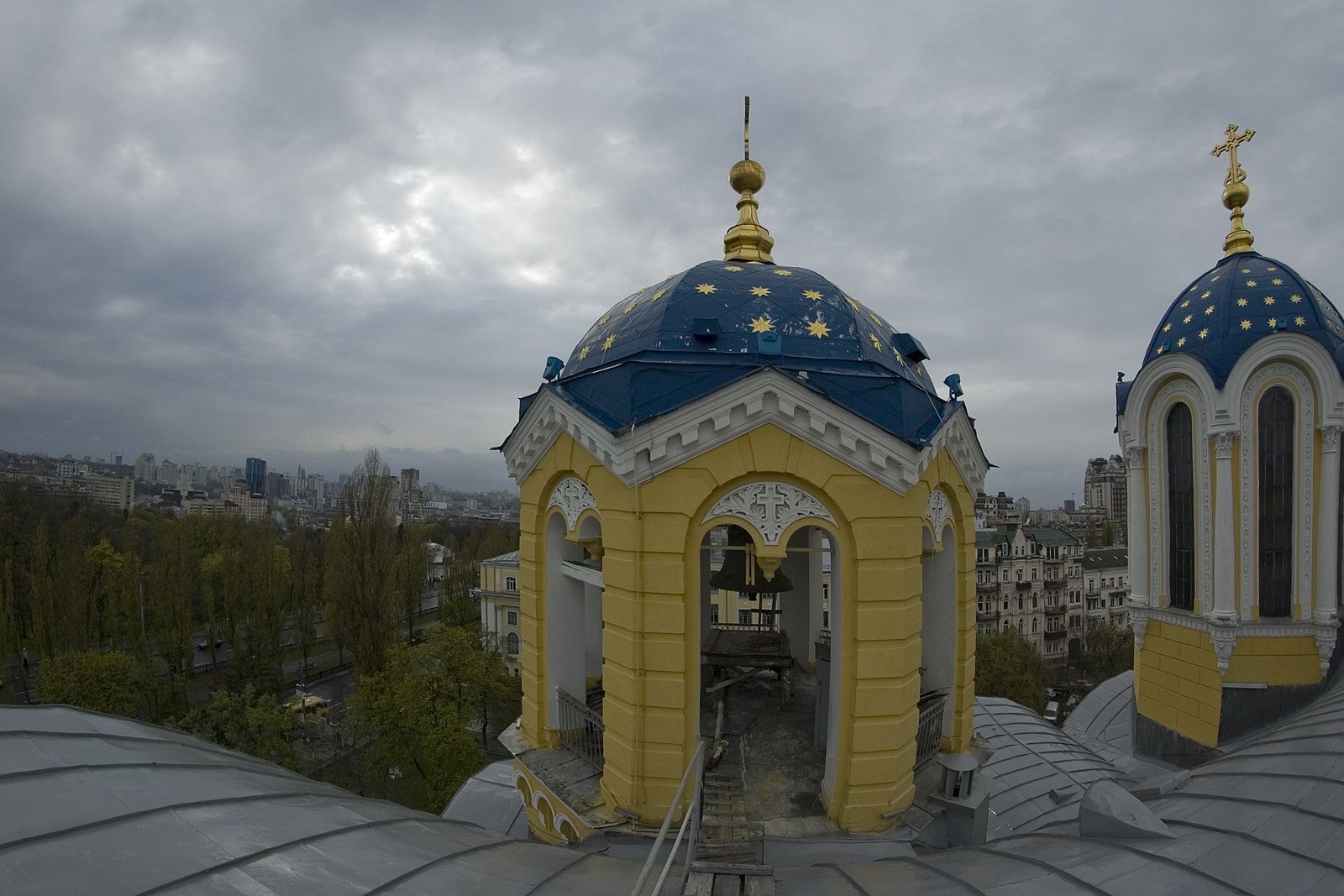 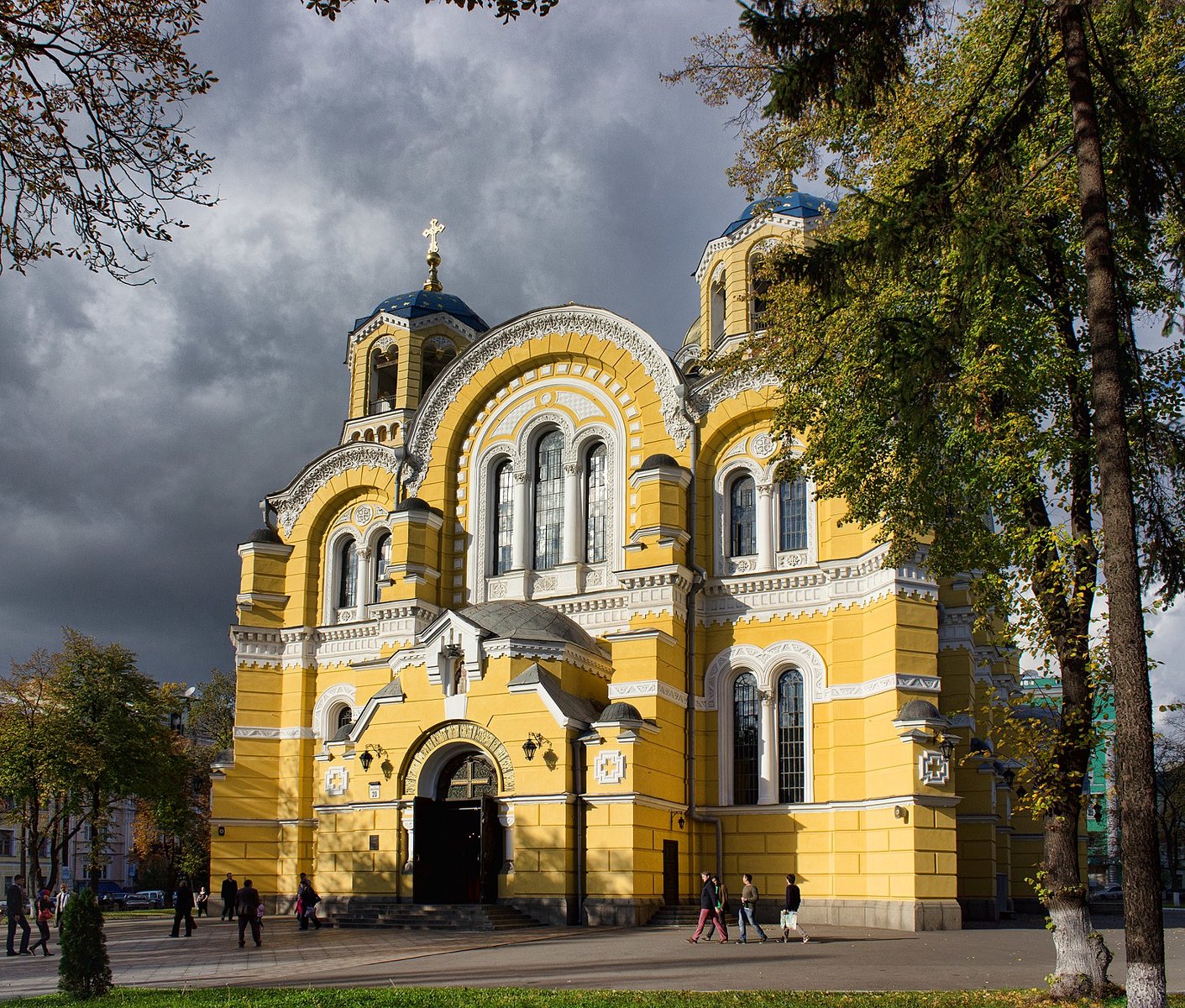 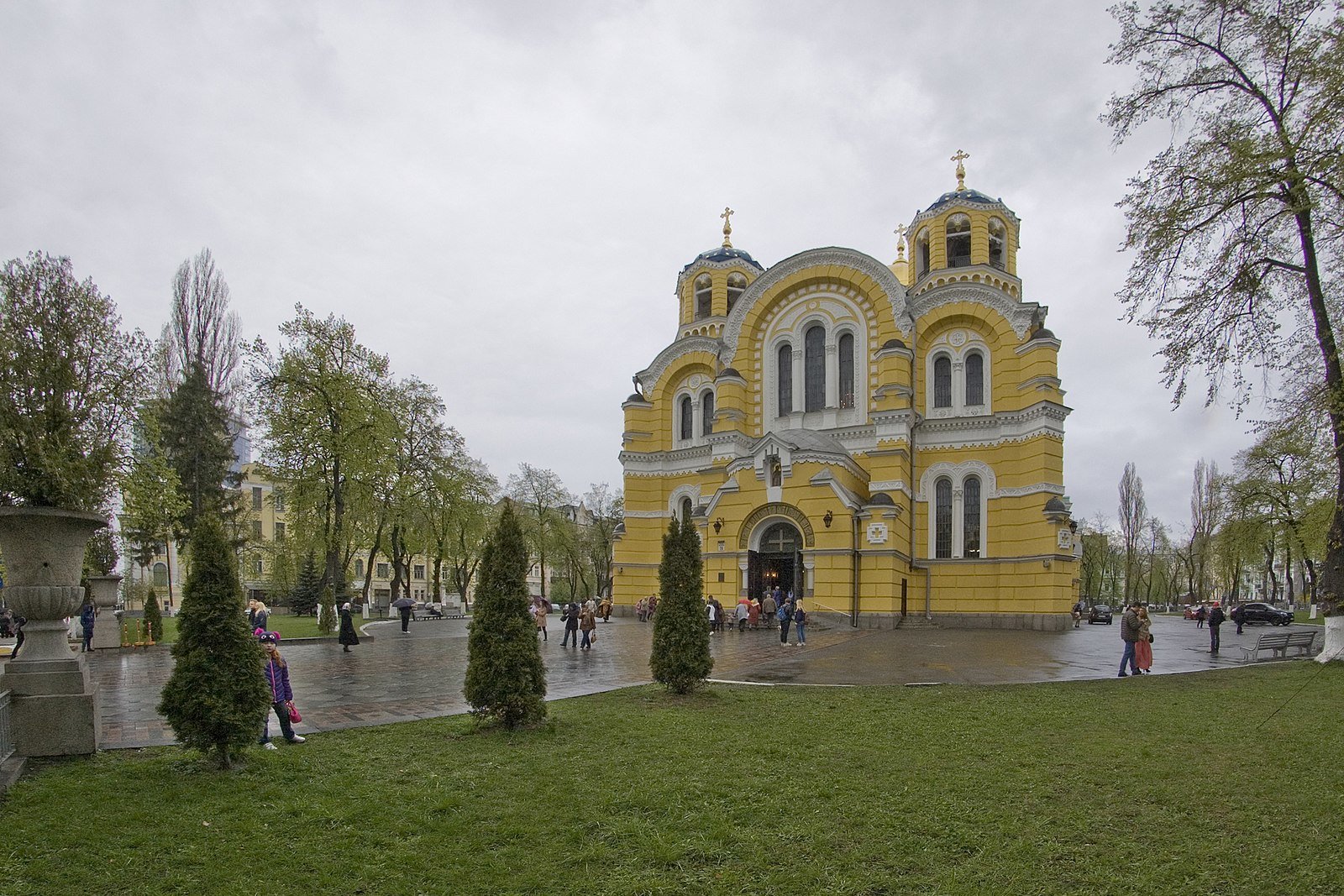 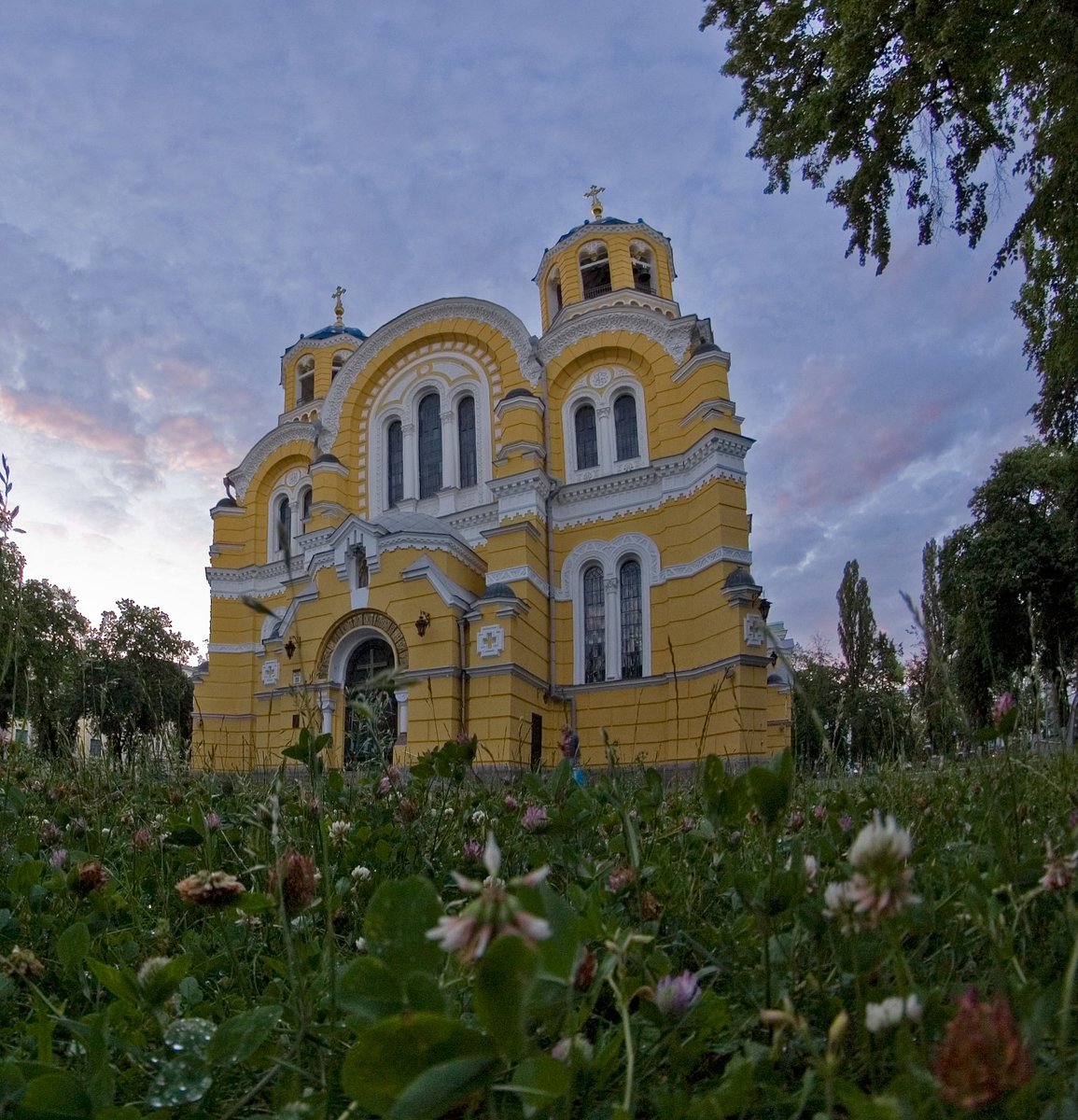 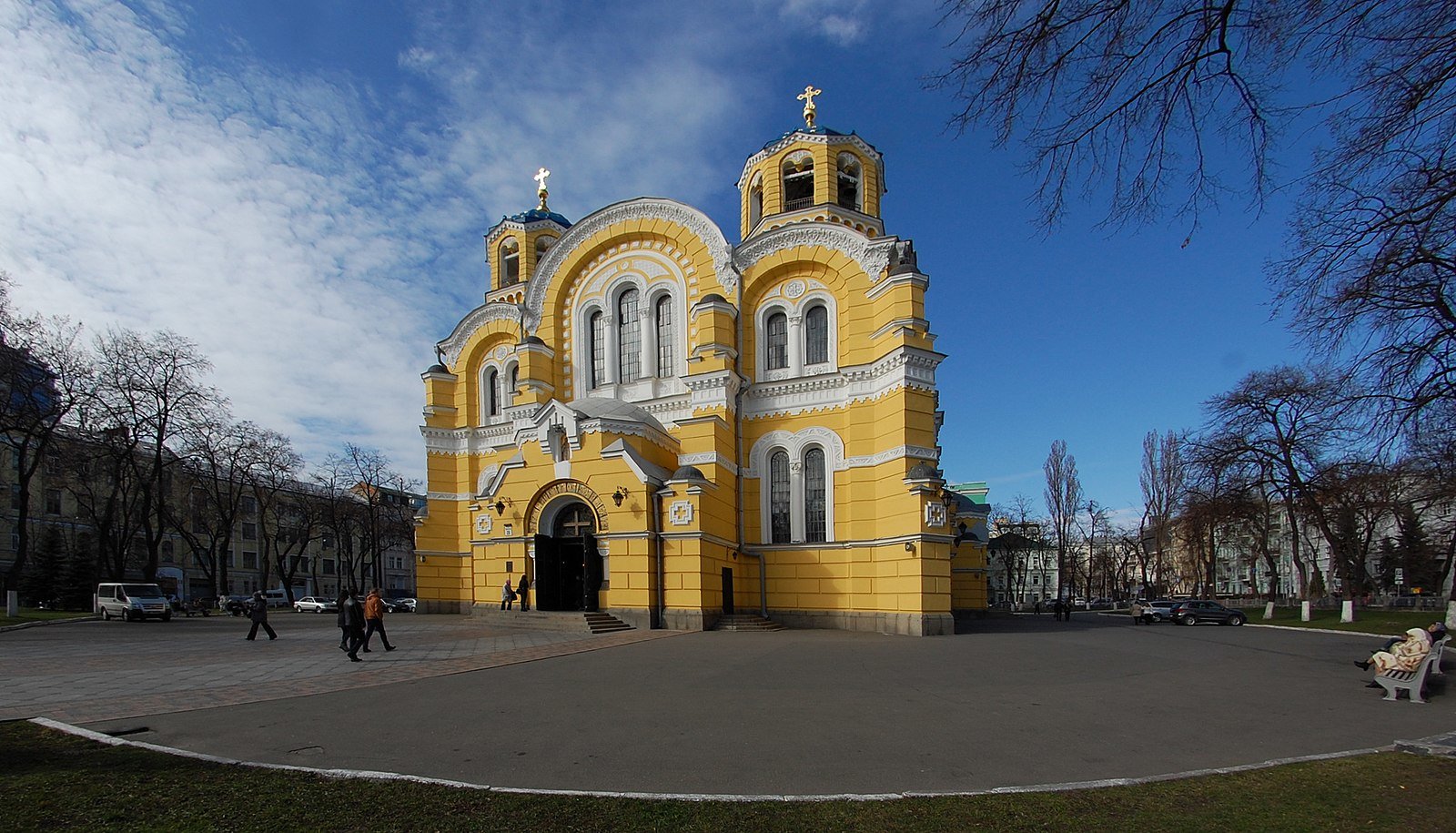 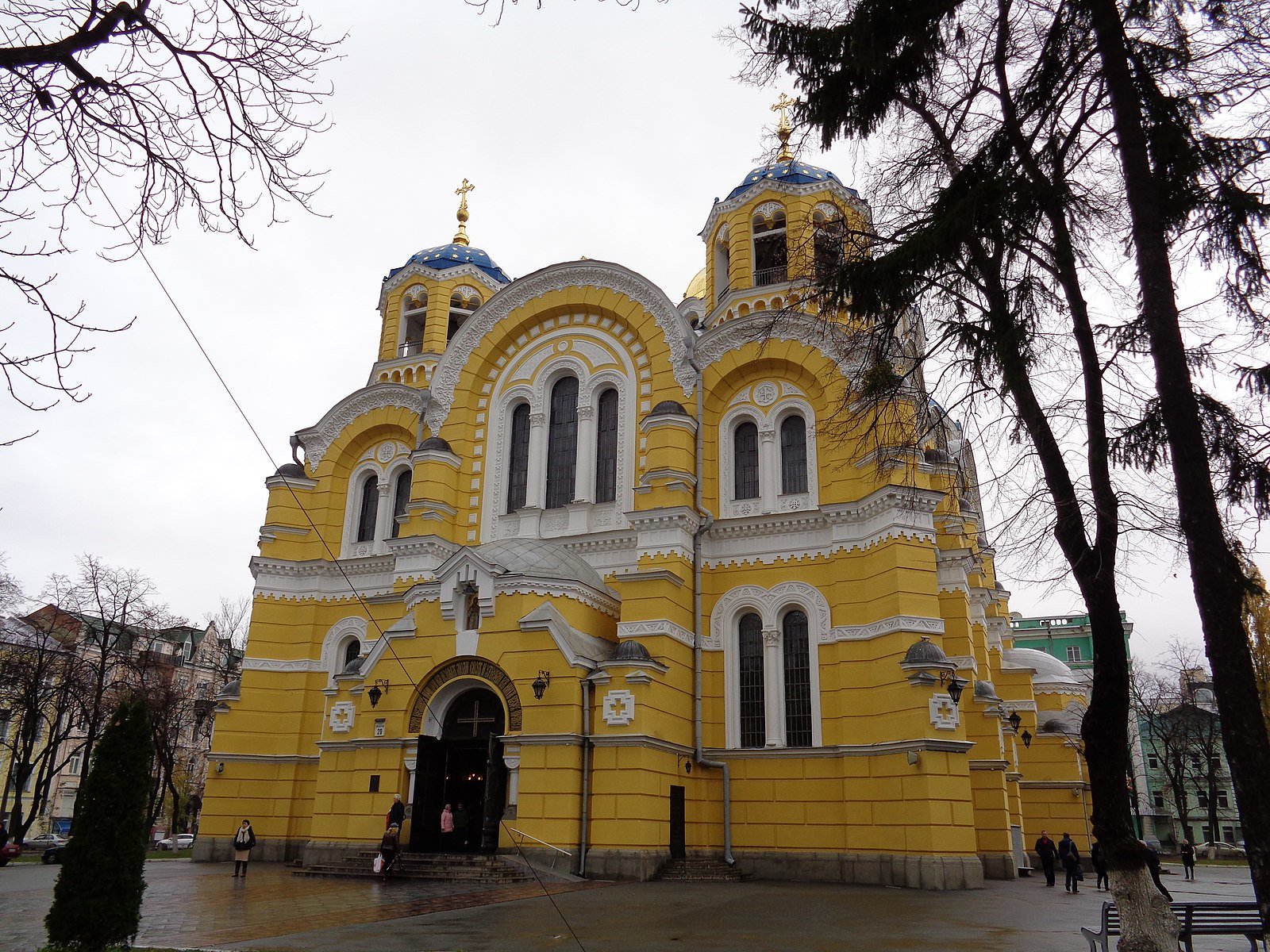