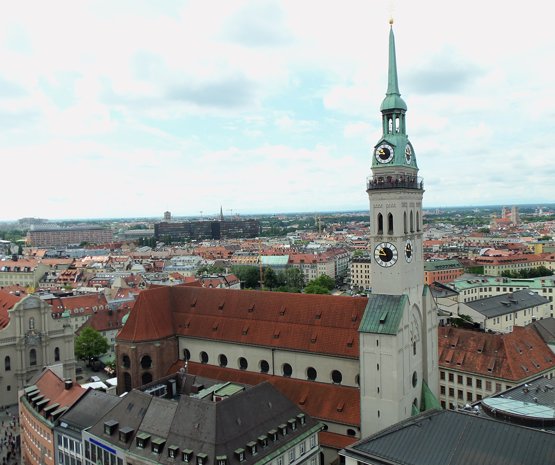 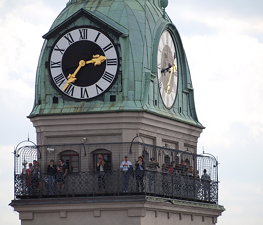 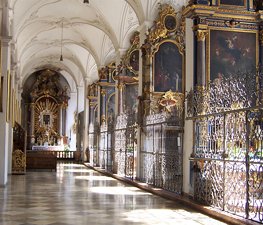 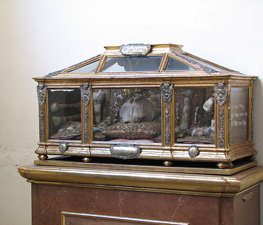 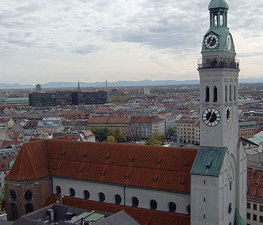 St. Peter's Church is a Roman Catholic church, and also the oldest church, in the inner city of Munich.

Even before Munich was founded as a city in 1158 there had been a pre-Merovingian church on this site. 8th century monks lived around this church on a hill called Petersbergl. At the end of the 12th century a new church in the Bavarian Romanesque style was consecrated, and expanded in Gothic style shortly before the great fire in 1327 destroyed the building. After its reconstruction the church was dedicated anew in 1368. In the early 17th century the 92 metre (about 302 ft.) spire received its Renaissance steeple top and a new Baroque choir was added.

The interior is dominated by the high altar to which Erasmus Grasser contributed the figure of Saint Peter. Among other masterpieces of all periods are five Gothic paintings by Jan Polack and several altars by Ignaz Günther. The ceiling fresco by Johann Baptist Zimmermann (1753-1756) was re-created in 1999-2000.

The parish church of Saint Peter, whose tower is commonly known as "Alter Peter" - Old Peter - and which is emblematic of Munich, is the oldest recorded parish church in Munich and presumably the originating point for the whole city.

St Peter's church (Petersplatz 1) stands on the Petersbergl, the only raised piece of land within the historic Old Quarter of Munich. Beneath the Petersbergl to the north-west lies the Marienplatz, and to the south-west is the Cattle Market. The parish church is the spiritual centre-point of the Graggenauer district.

By the 8th century a settlement of monks from the Tegernsee monastery had already been extablished on the Petersbergl. Under the church was a concave space which experts date to the pre-Merovingian period, or the early Middle Ages. Excavations in 1958 showed that by the 11th century, still before the founding of the city, the original small wooden church had been developed into a Romanesque church with a nave and two side aisles and two integrated west-towers. Whether this was typical of the Bavarian Monastery-churches of the Romanesque has not been proven. What can be shown, however, is that Otto I of Wittelsbach had the church extended in 1181 and this extended church was consecrated in 1190 by Bishop Otto II of Freising. A hundred years later, this building was torn down and replaced with a more ostentatious church. A substantially bigger church was not necessary, since the parish of the Frauenkirche (Church of Our Lady) was drawn up parallel to the newly-built church and in the centre of the district a new parish church was built. The new St Peter's church was consecrated on 17 May 1294 by Bishop Emicho of Freising

Mareike Bräuer
2€ (1€ for students)! The walk up takes a while but the view is amazing! On a sunny day you can see the Alps :)

Roy Kraft
See Munich from above? Just climb 306 stairs & you see the Alps. Do you know why there are 2 clock faces on each side of the tower? It enables 2 people form very side to know how late it is :-)

Diego Francesco P.
It's the oldest church in the city, visit the interior sculptures, paintings and gold inserts. Exit from the back and climb up the tower, the view is worth the effort of 91 meters and 306 steps!

Mark B
Great church from early 1300s. Beautiful and well worth the visit. Didn't have chance to walk up the tower but heard it's great view.

Rosselin Pastoriza Pernia
The best views but be ready to take a lot of stair and get stuck in the middle of them.. not recommended to claustrophobic people

Mahmut Enes Kayaalp
It’s bell tower offers magnificent views. But also in the inside it is beautiful.
Load more comments
foursquare.com
8.8/10
Andrey and 32,952 more people have been here
I've been here
Add to wishlist

The Old Town Hall (German Altes Rathaus), until 1874 the domicile of

The New Town Hall (German: Neues Rathaus) is a town hall at the

The Rathaus-Glockenspiel of Munich is a tourist attraction in

The Basilica of Sant' Apollinare Nuovo is a church in Ravenna, 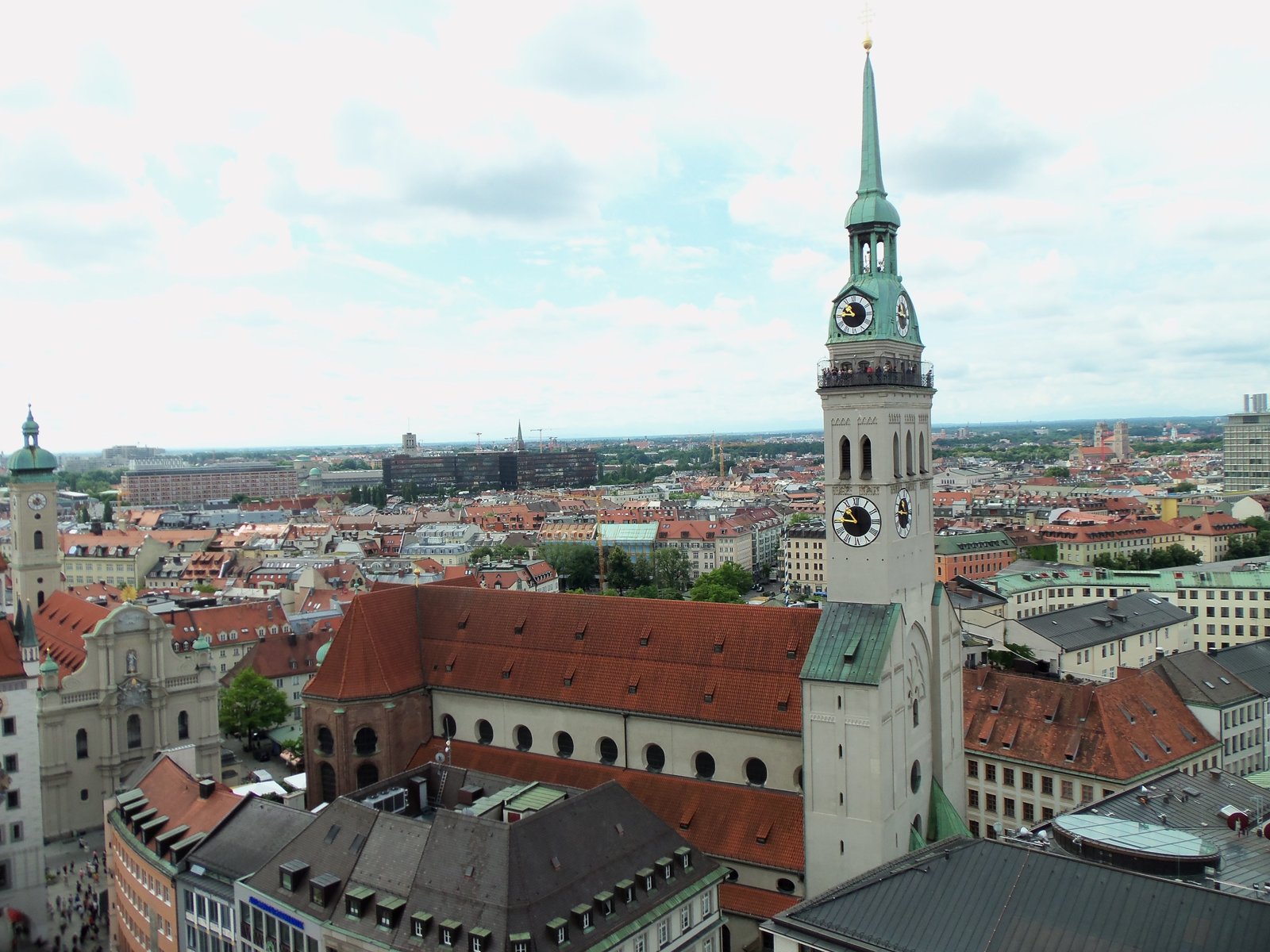 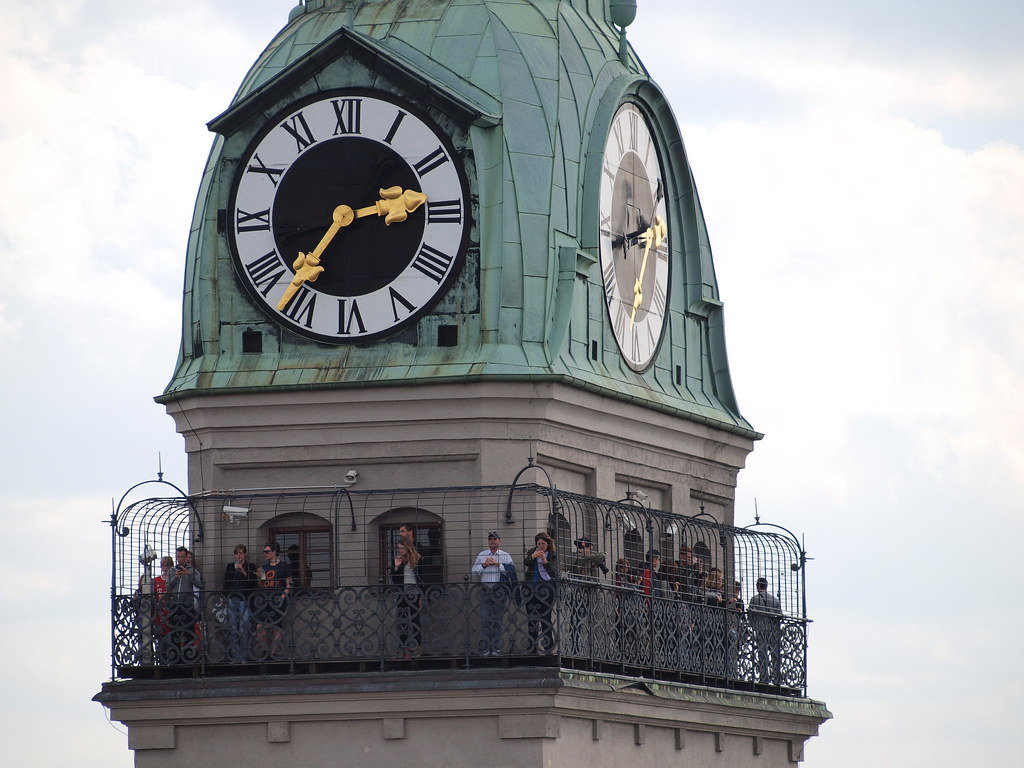 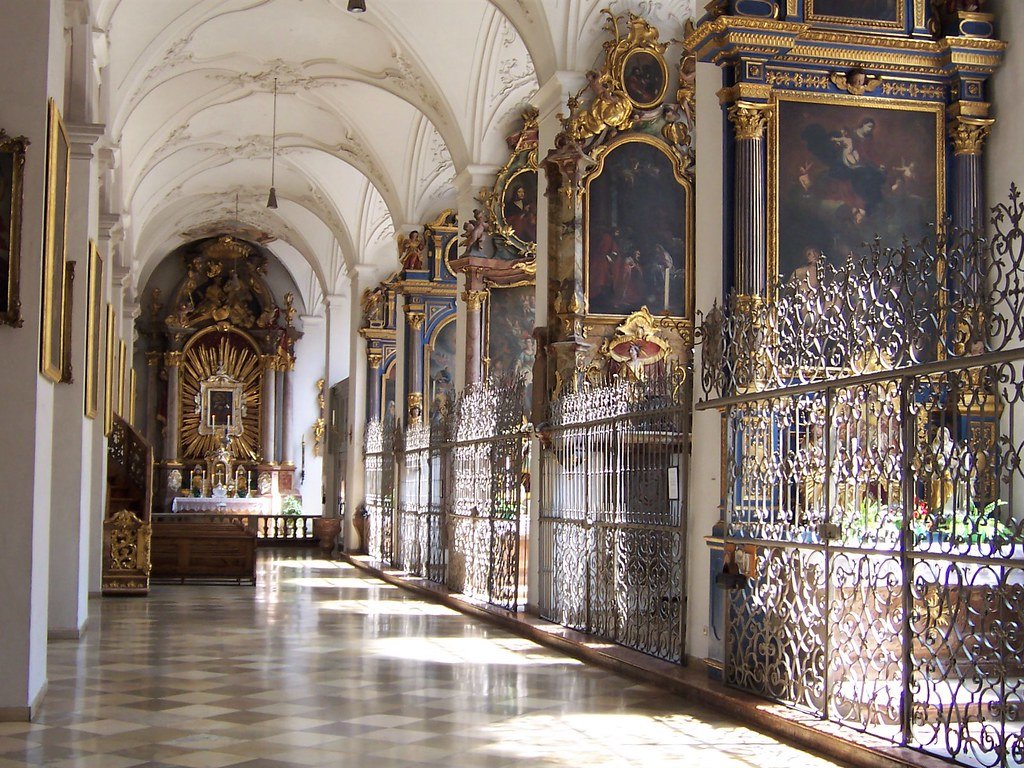 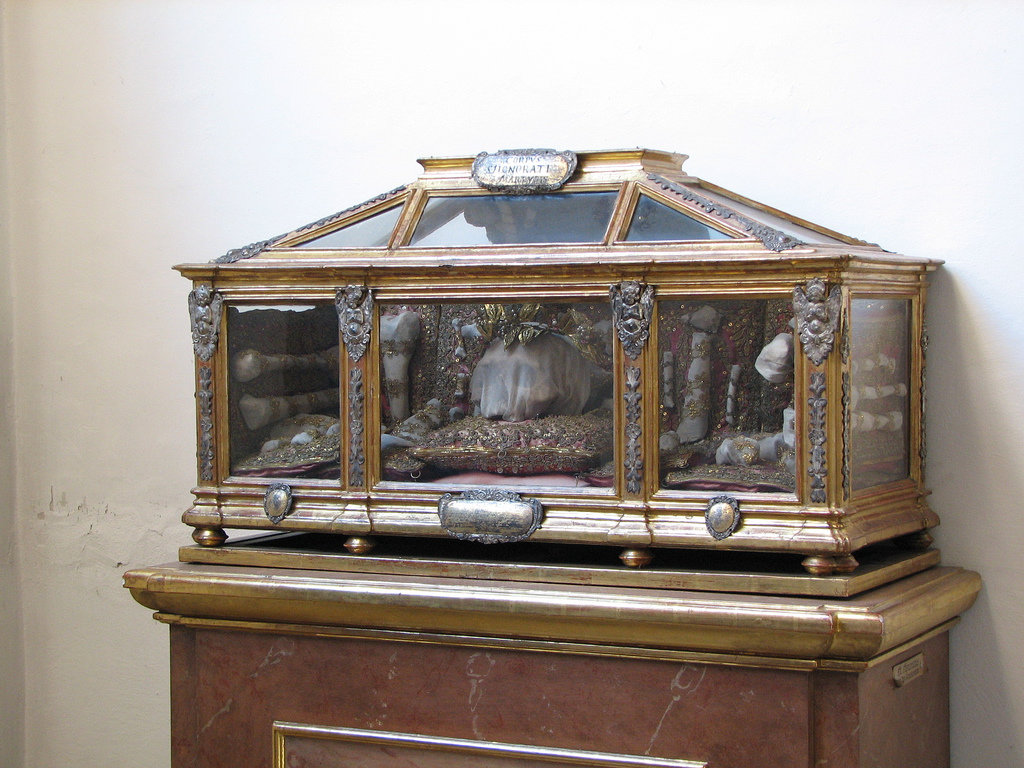 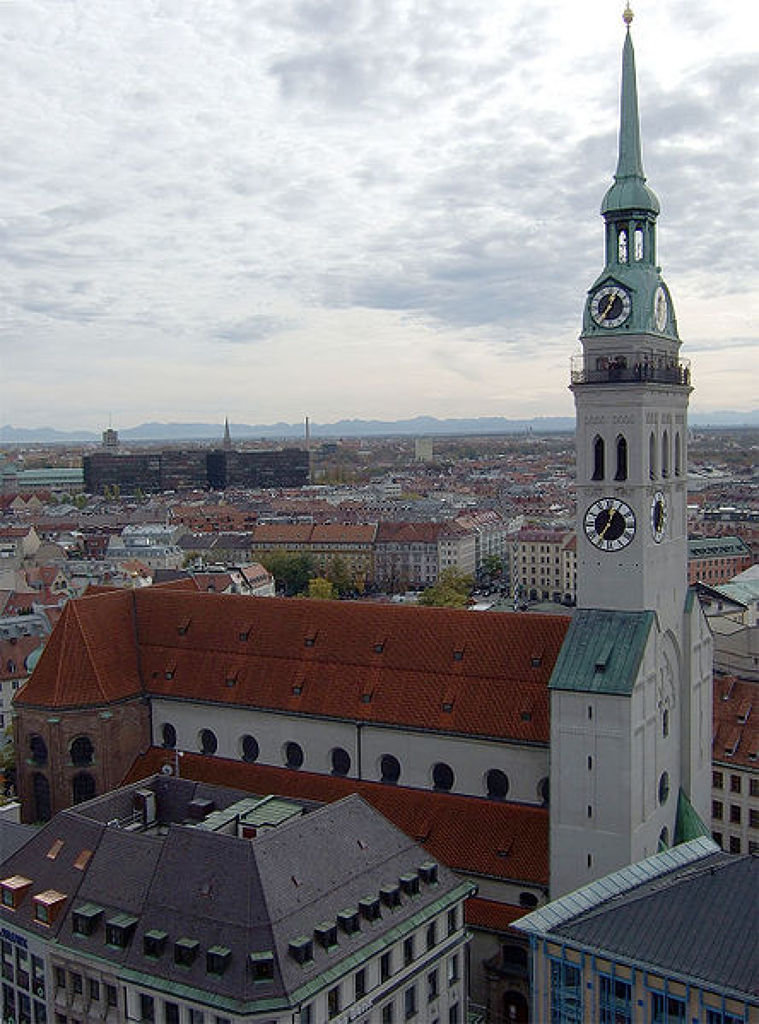 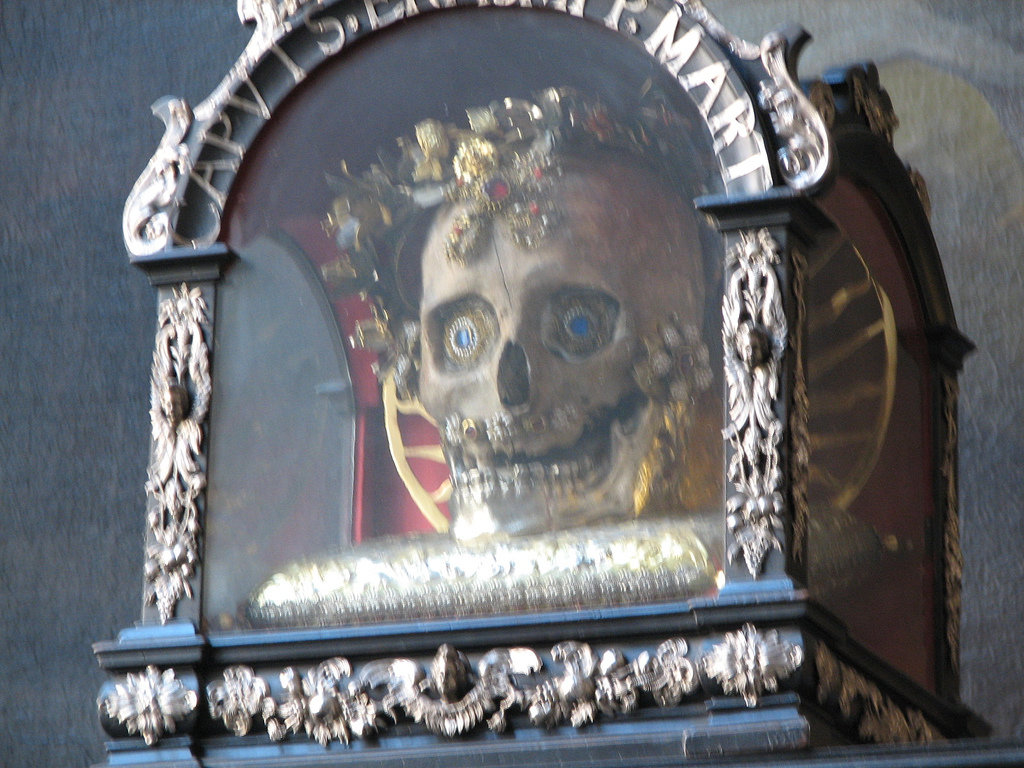 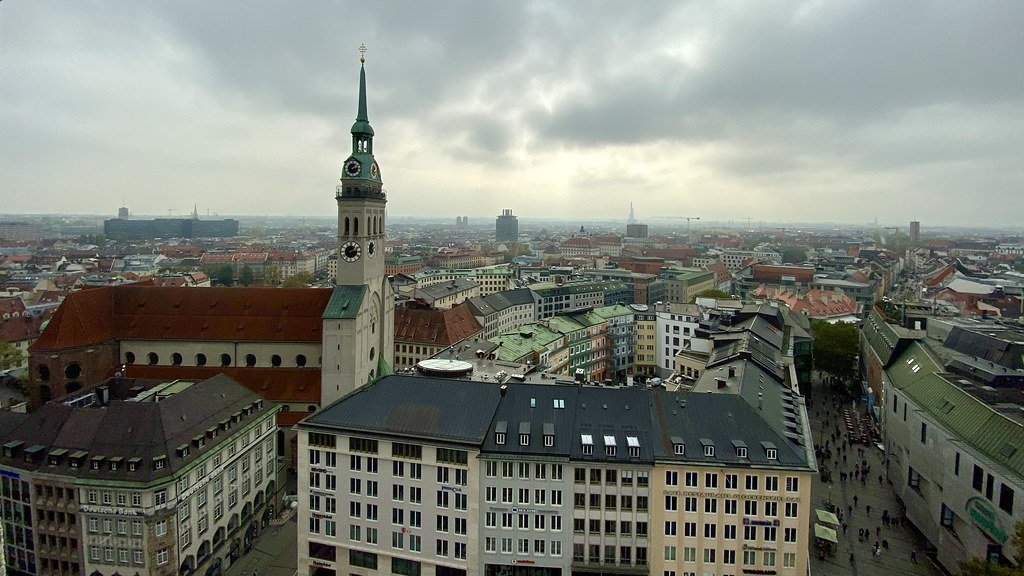 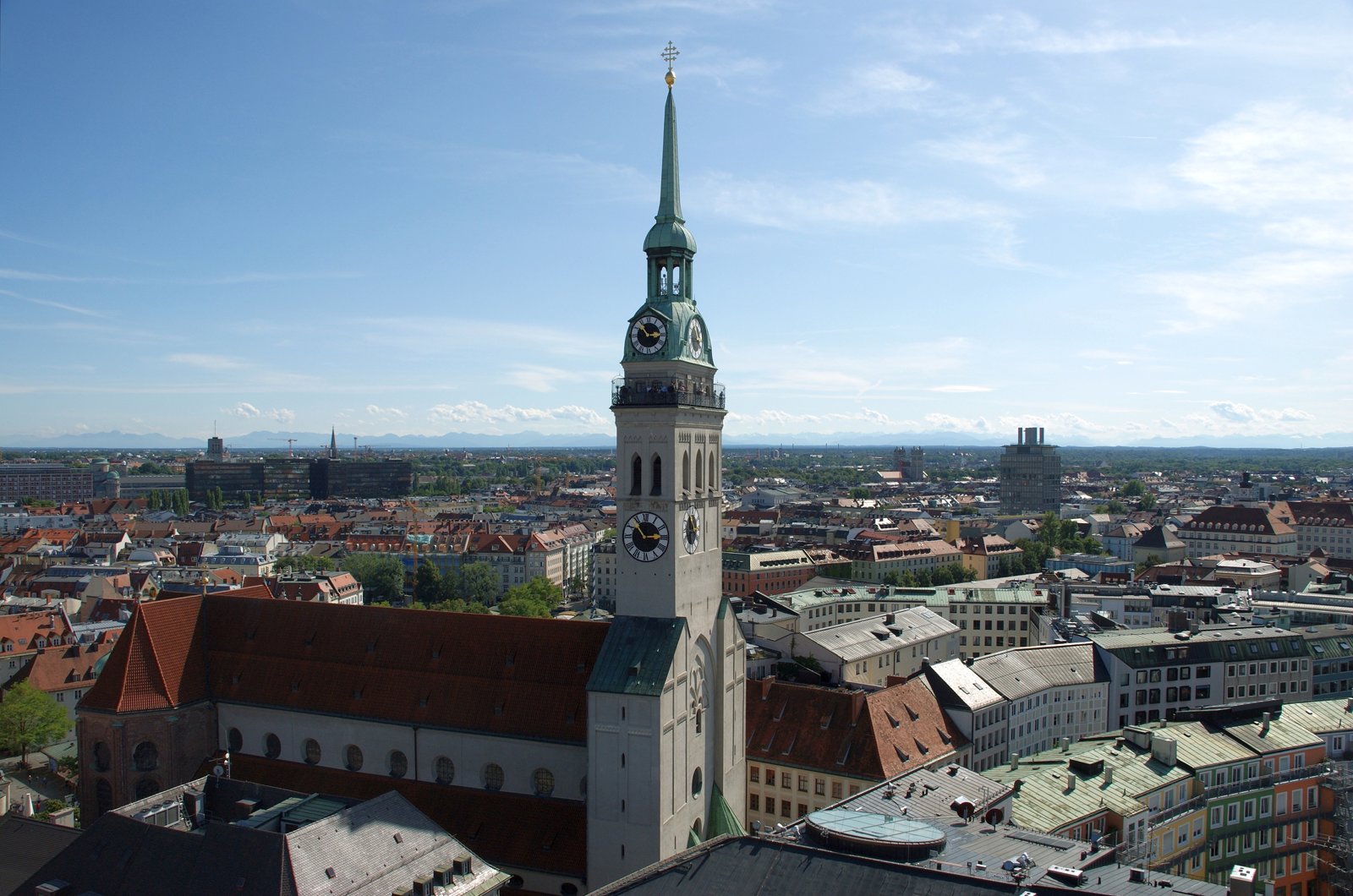 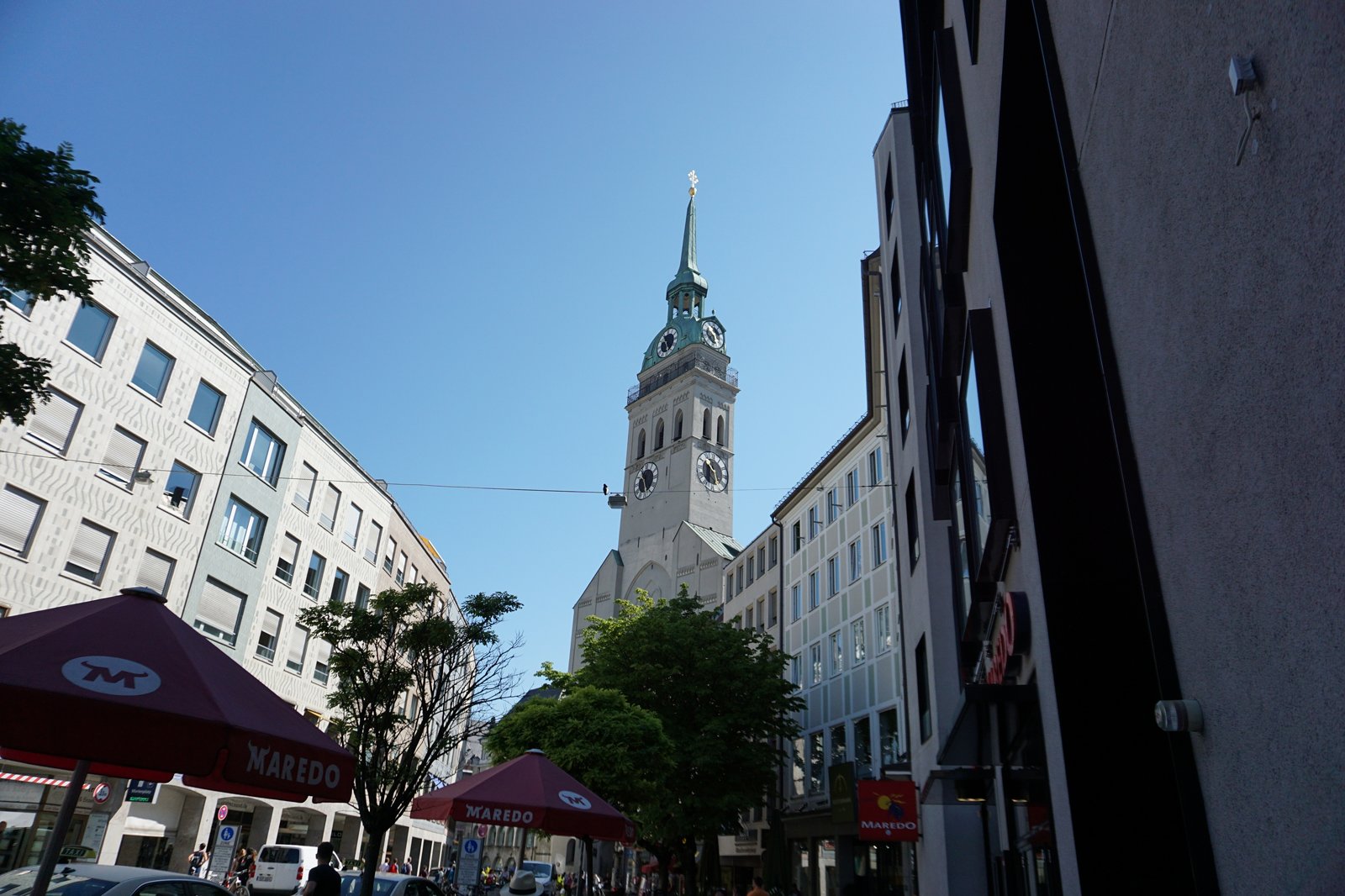 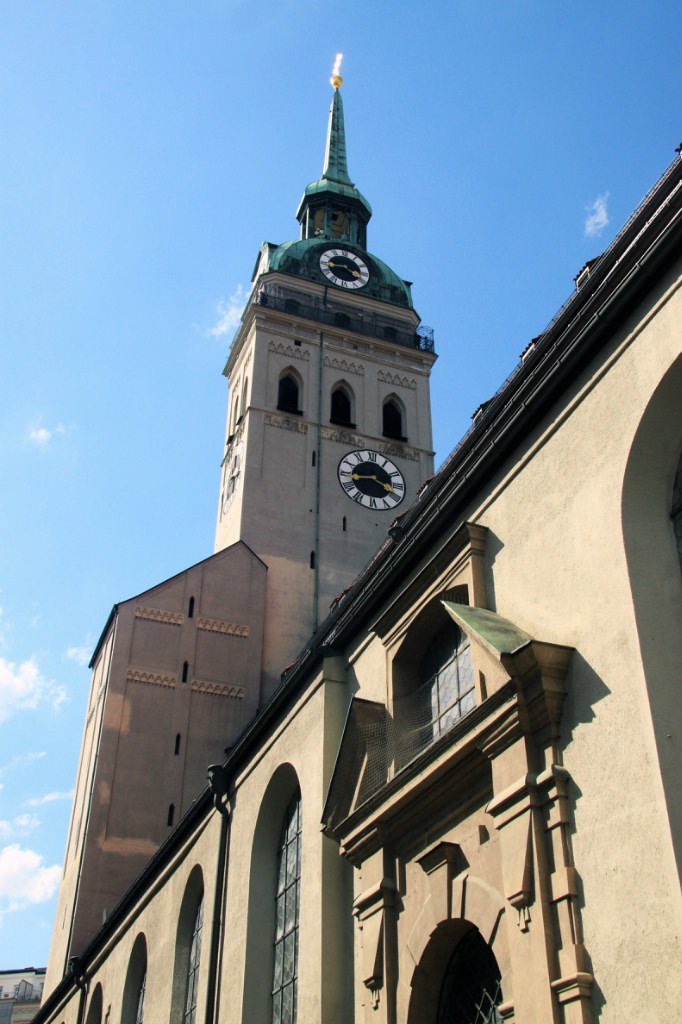 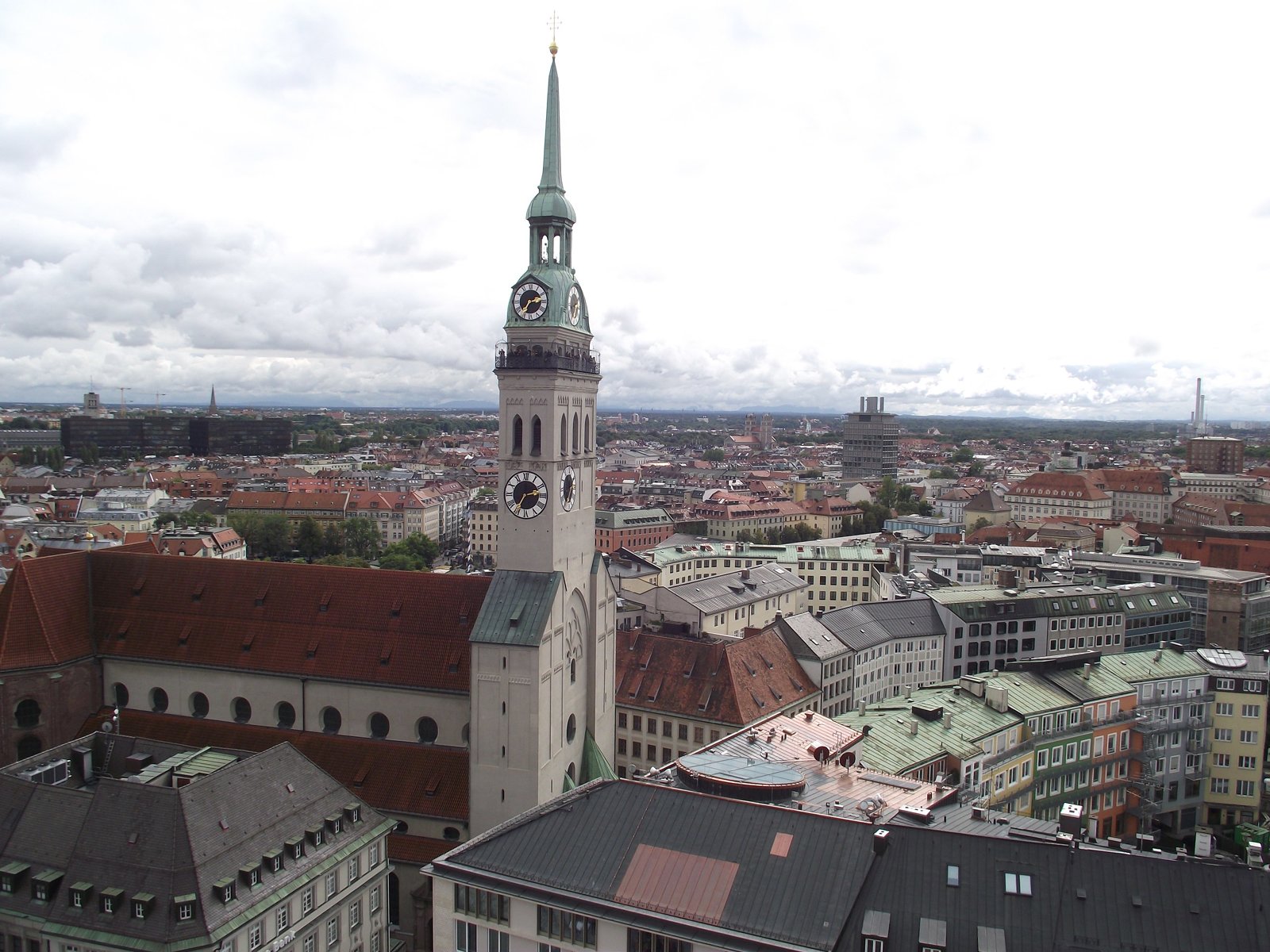 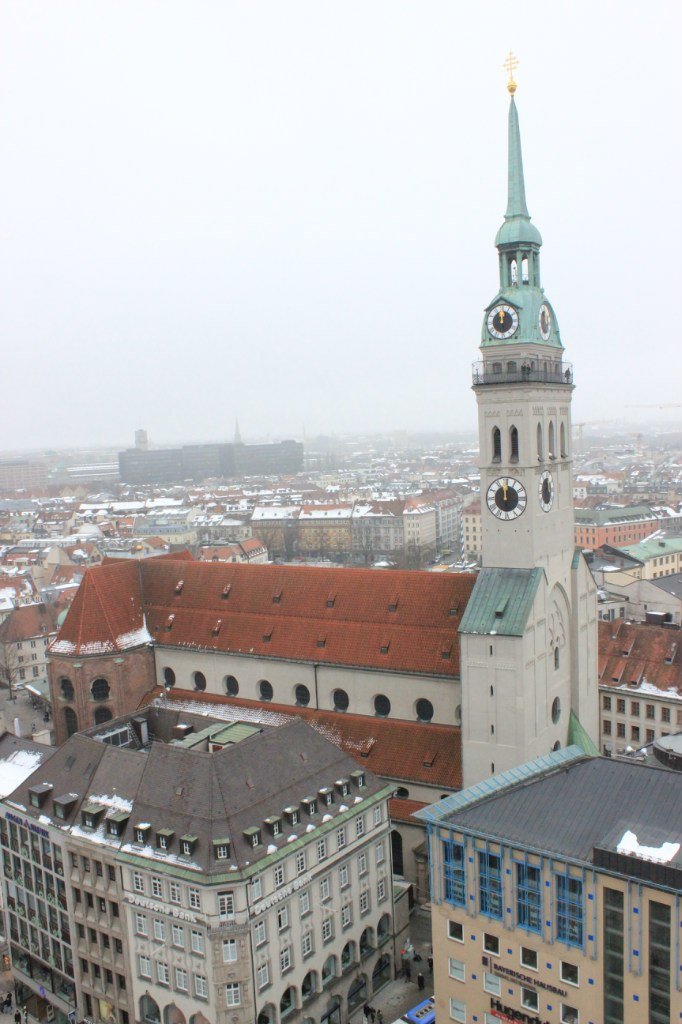 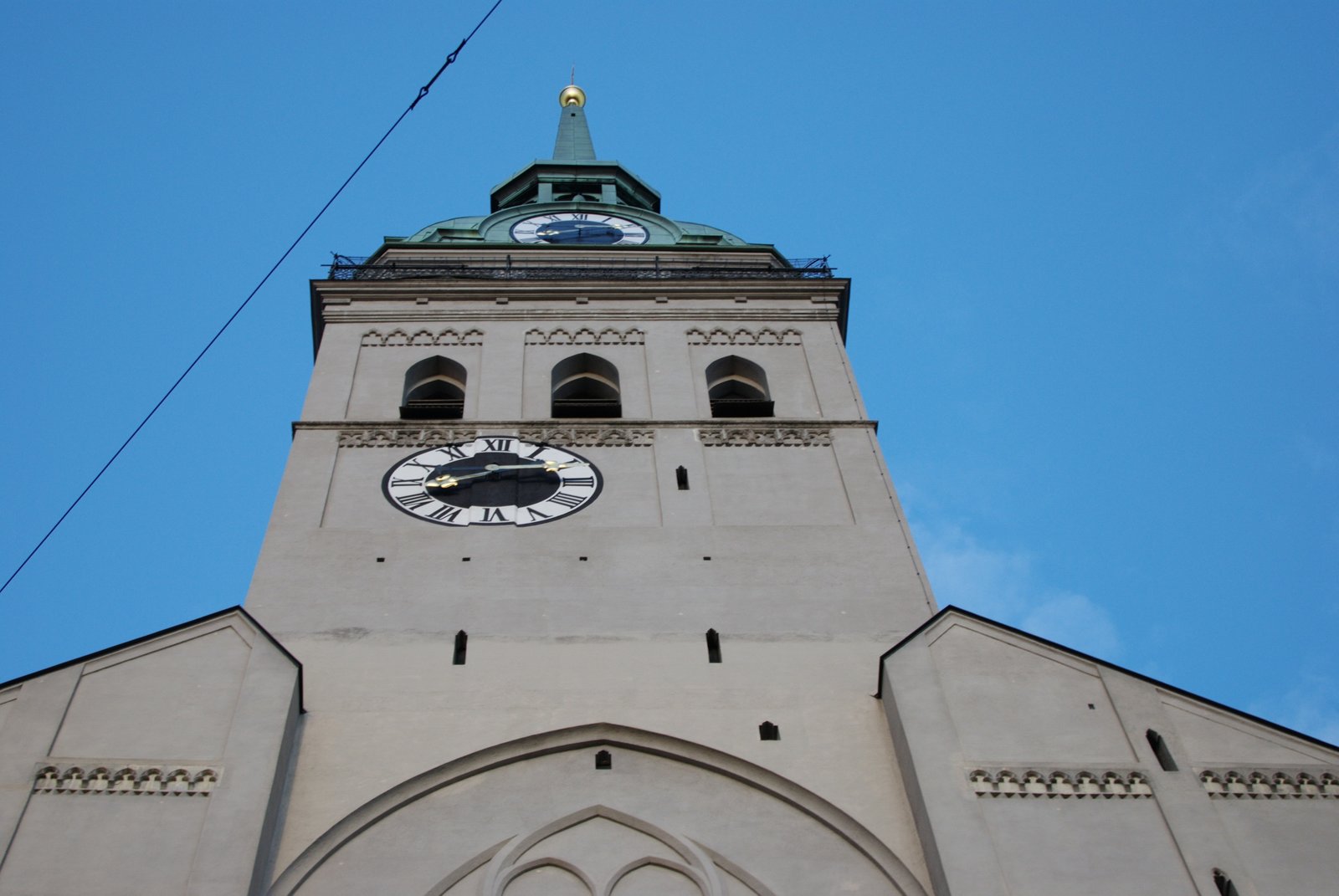 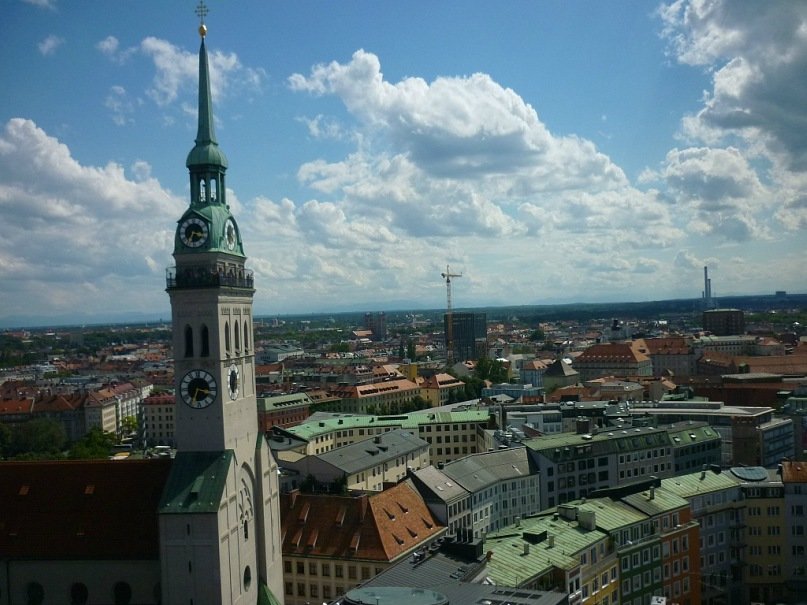 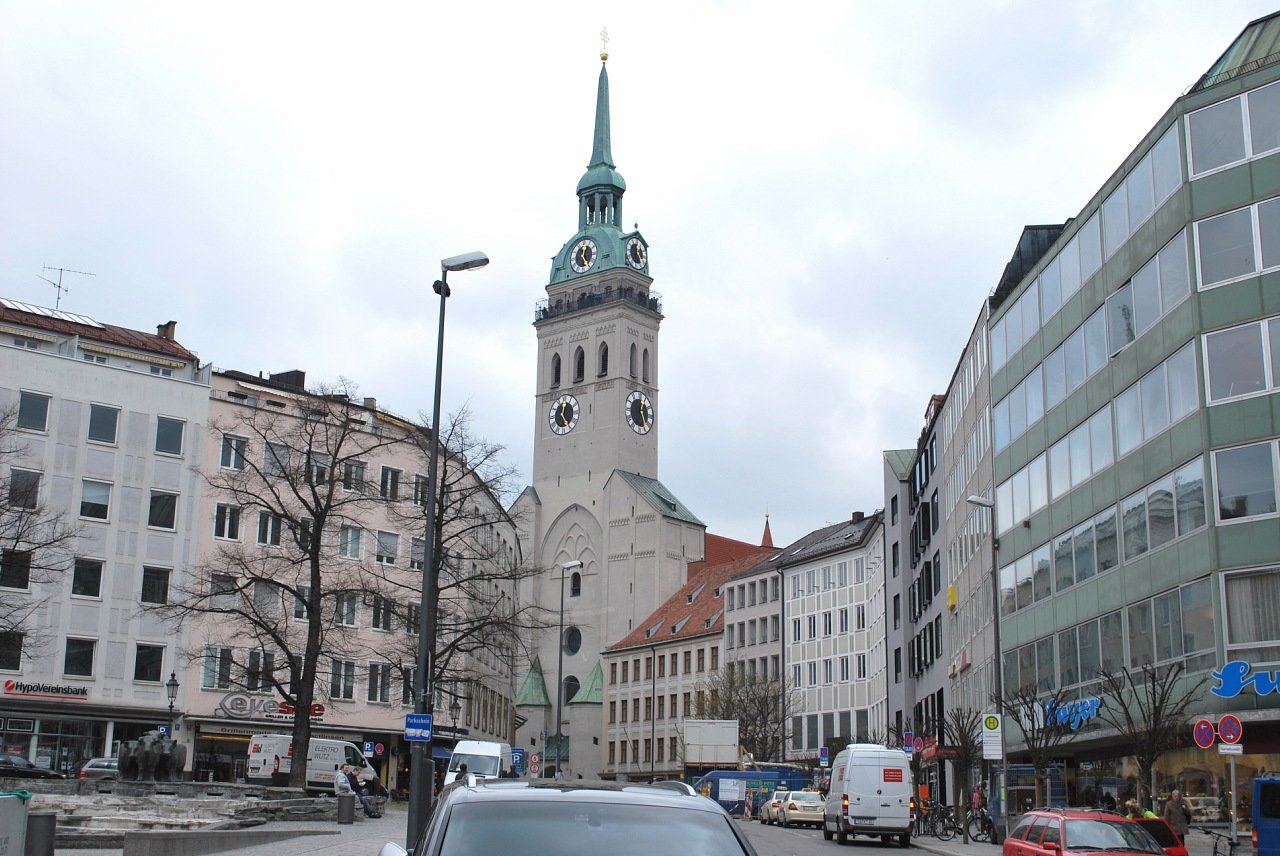 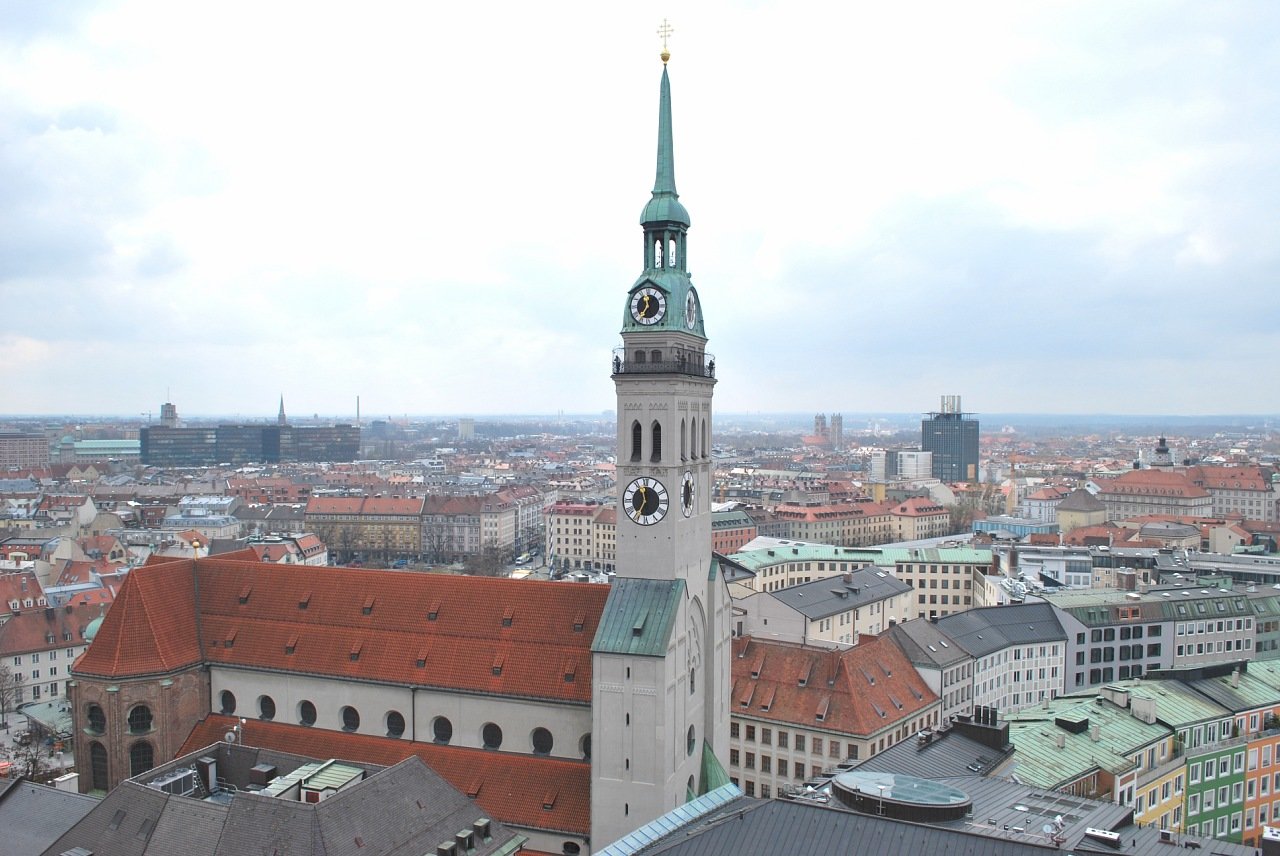 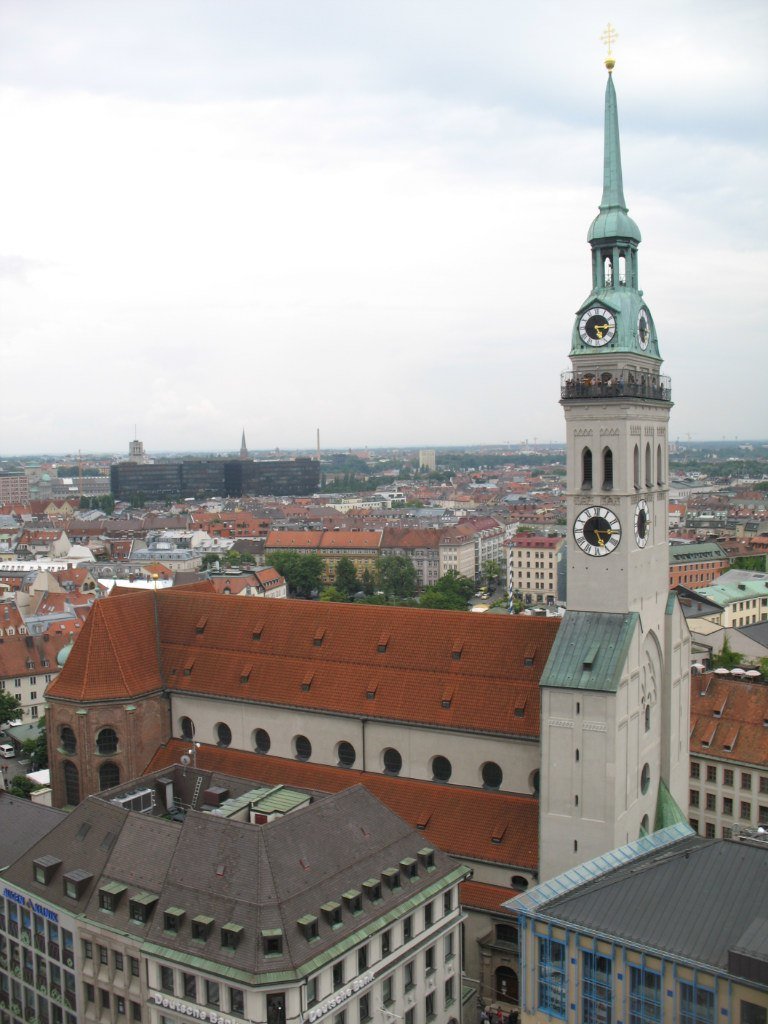 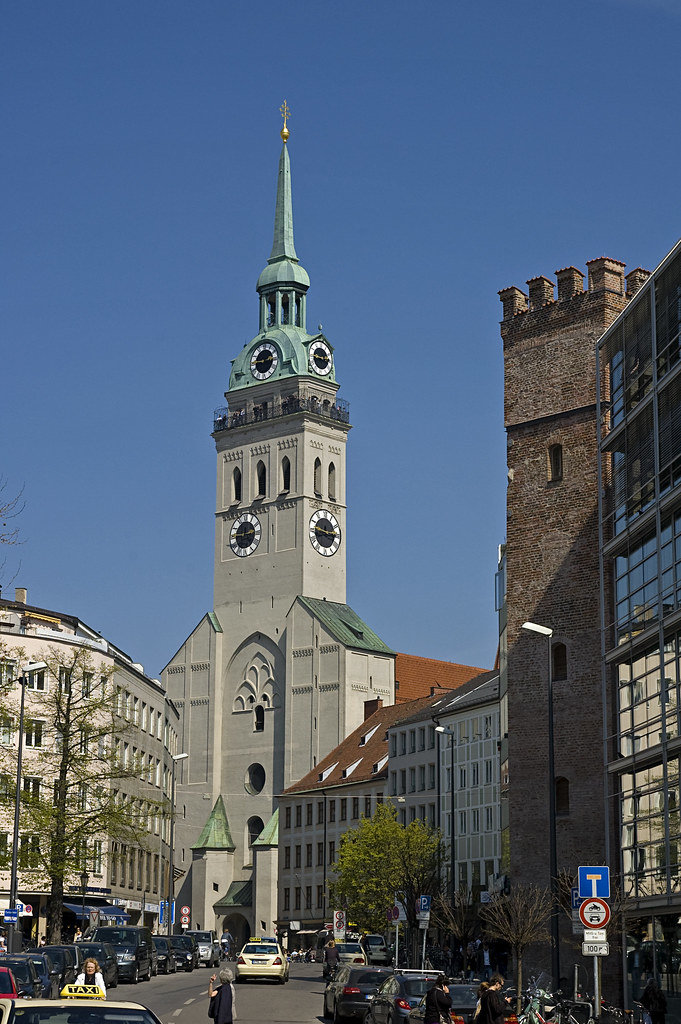 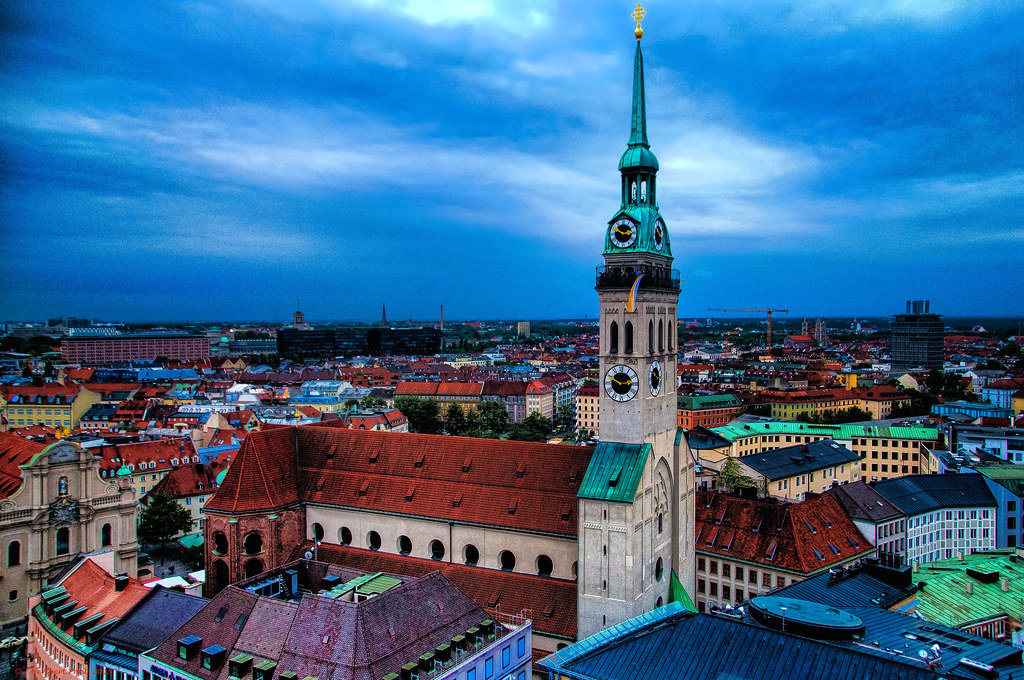 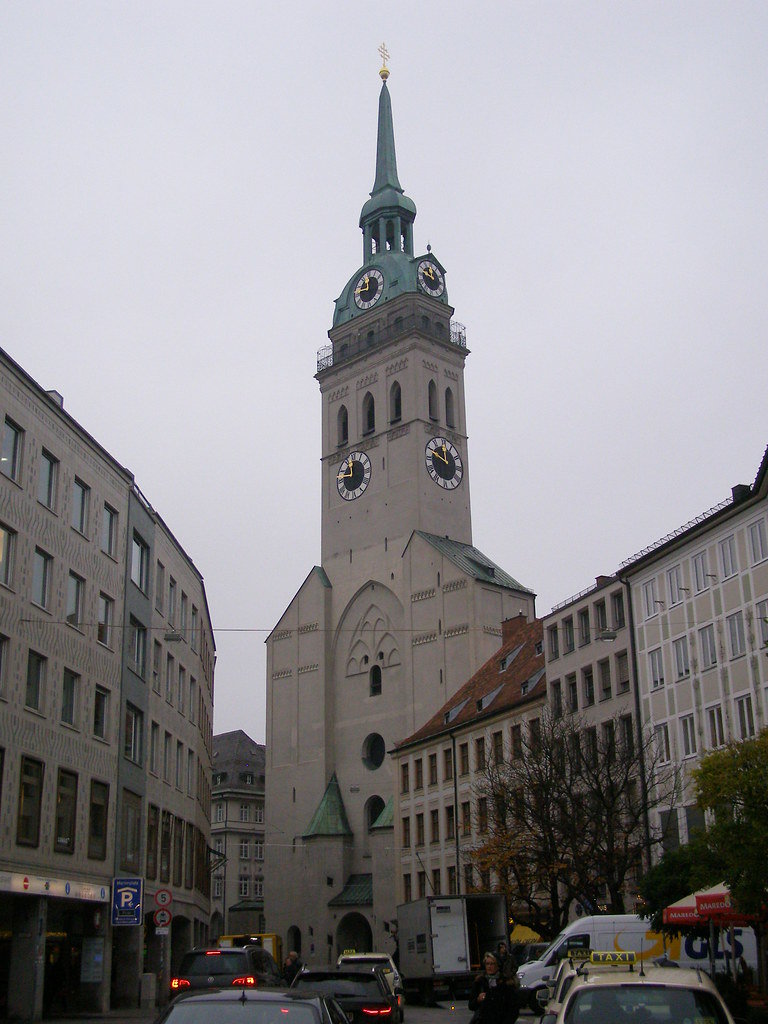 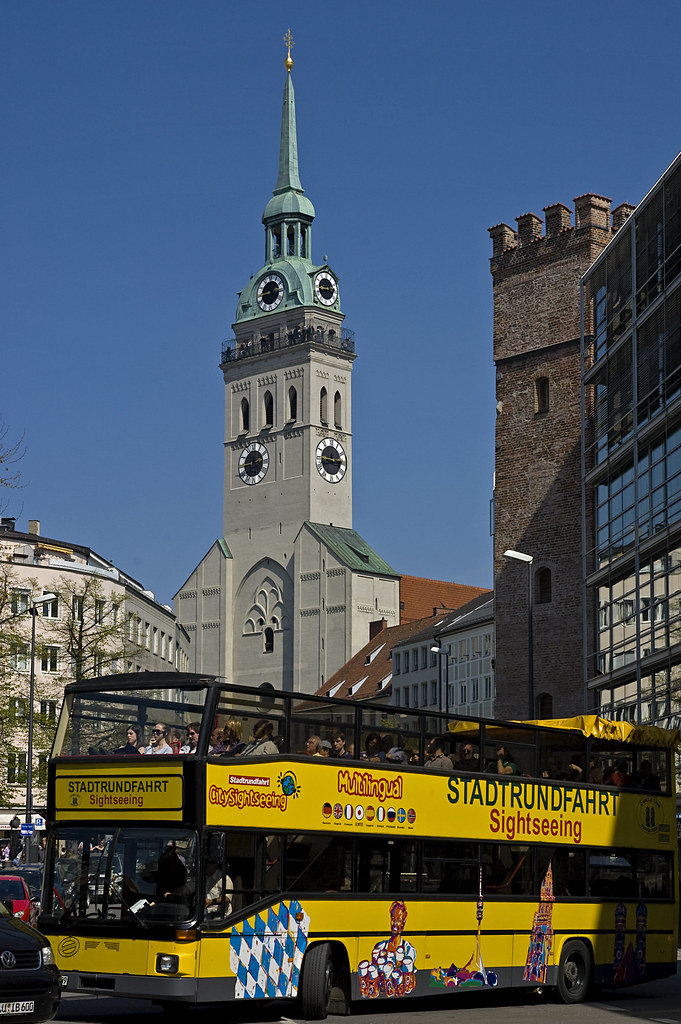