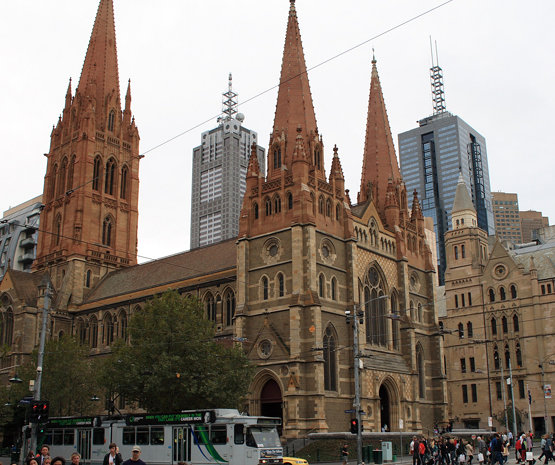 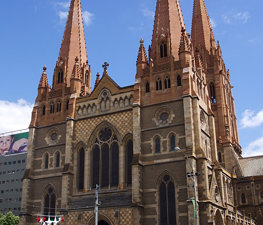 Although there was no established church in colonial Victoria, most of the colony's establishment were Anglicans and the Church of England, (as it was then called), was given the best site in Melbourne for its cathedral. At the time of its construction St Paul's was the tallest building in central Melbourne and dominated the city's skyline. The growth of multi-storey buildings in central Melbourne during the 20th century robbed St Paul's of its commanding position and restricted views from many angles. The recent construction of Federation Square, which involved the demolition of a pair of adjacent highrise buildings, the Gas and Fuel Buildings, has improved the Cathedral's visibility from the south.

St Paul's is built on the site of Melbourne's first Christian service, conducted on the banks of the Yarra a few months after Melbourne was founded in 1835. The area was a market until 1848, when St Paul's Parish Church, a bluestone church, was built on the site.

In 1885, as Melbourne grew rapidly, this church was demolished to make way for the new cathedral. It replaced St James Old Cathedral, which then stood on the corner of William Street and Collins Street, but was later removed to a site near the Flagstaff Gardens.

The cathedral choir sang Ecce vicit Leo as His Holiness entered the cathedral, after which His Holiness prayed for Christian Unity, and lit a metre-long candle. A memorial chapel (see below) commemorates this historic occasion: the third time in four centuries where a Pope had entered an Anglican Cathedral.

St Paul's is built in a revival of the style known as Gothic transitional, being partly Early English and partly Decorated. It was designed by the distinguished English architect William Butterfield, who was noted for his ecclesiastical work. The foundation stone was laid in 1880. Butterfield never saw the site and the building work was frequently delayed by disputes between Butterfield, in England, and the Church authorities on the spot. Butterfield resigned in 1884 and the building was finished by a local architect, Joseph Reed. Consequently the design of the spires differs greatly from those originally planned (similar to those built at Christ Church, South Yarra). The Cathedral Chapter has a scale model of the original completed design.

The Cathedral was consecrated on 22 January 1891, but the building of the spires did not begin until 1926. The spires were designed by John Barr of Sydney. An organ was imported from England and is acknowledged as the finest surviving work of T. C. Lewis, one of the greatest organ-builders of the 19th century. Besides Sunday and weekday Mass the cathedral also has a tradition of a daily choral evensong, one of the few Anglican cathedrals outside the British Isles to do so.

St Paul's in unusual among Melbourne's great 19th century public buildings in that it is not made from bluestone, the city's dominant building material. Instead it is made from sandstone imported from NSW, giving the cathedral a warm yellow-brown colouring rather than Melbourne's characteristic cold blue-grey. This gives it a strikingly different appearance to the bluestone Gothic of St Patrick's Catholic cathedral on the eastern edge of the city. Because the spires are made from different stone and are thirty years newer, they are of a darker tone than the older parts of the building. St Paul's Moorhouse Tower is the second highest Anglican spire in the world, the tallest being Salisbury Cathedral's.

By the 1990s the constant traffic vibration of central Melbourne had led to concerns about the structural soundness of the cathedral, particularly the spires. A public appeal, led by the then Dean, the Very Reverend David Richardson, raised AU$18 million to restore the spires and improve the interior of the building. The five-year restoration project is almost complete.

Inside the St. Paul's Cathedral. A view of the Church Organ Pipes. — sharathjeppu @ Flickr

As part of the work, stone heads of Dean David Richardson and philanthropist Dame Elisabeth Murdoch, created by Melbourne sculptor Smiley Williams were added to the spires.

Saint Paul's Cathedral — The Devil in the Detail @ Flickr

Dr June Nixon was awarded a Lambeth Doctorate by the Archbishop of Canterbury in recognition of her long contribution to choral and organ music; the only female to be so honoured to date.

</center> The cathedral's pipe organ which was built by T. C. Lewis and Co of Brixton, England. Over six and half thousand pounds were spent on its construction, shipping and installation before it was played at the cathedral's opening in 1891. Various modifications and maintenance works have been carried out since then, culminating in a $726,000 restoration which was completed in 1990 with the help of a National Trust appeal. In its restored state the organ has four manuals with 44 stops and pedals with nine stops, all with electro-pneumatic action. It is housed in the cathedral's south transept behind newly-stencilled facade pipes.

Originally formed in 1888 in conjunction with the choir of All Saints' St Kilda, the cathedral choir led the procession for the official opening in 1891.

The choir today consists of 20 boys (on scholarships) and 16 men. It sings weekday evensong (Tuesday - Friday) and two regular services on Sunday. However the choir is also called upon for special events and is known to sing at chapter evensongs, synod services, state funerals, concerts and carol services.

The robes worn by the choir have evolved over time. Originally, the choir wore traditional black cassocks and white surplices. With the introduction of the Australian Prayer Book in the late 1970s new cassocks of a green colour approximating that of the new prayer book cover (and coincidentally, that of the visible organ pipework at the time) were introduced and surplices were discontinued. On a visit to the cathedral in 1985 by the then Archbishop of Canterbury, a somewhat astonished Robert Runcie exclaimed that he had "never seen a cathedral choir wearing green robes before". With the restoration of the organ in the early 1990s, surplices were restored and cassocks of a deep burgundy were introduced matching the new stencil design hue on the organ pipes.

On 28 November 2007, a carol service featuring the choir was recorded by the Australian Broadcasting Corporation and telecast Australia-wide on Christmas Eve.

St Paul's has one of the few peals of thirteen bells outside the British Isles. The bells were donated by Thomas Dyer Edwardes. They are rung regularly, with practice sessions held on Wednesday and Friday evenings.

Established in 1993, the cathedral's music foundation is solely responsible for paying the lay clerks (men singers) and music staff (including the director of music), as well maintaining the organ, purchasing music and funding promotions.

Open House Melbourne
Unlike most of Melbourne's great 19th century public buildings, the Cathedral is made from sandstone and not bluestone. at Open House 10am to 4pm - Saturday 28 and Sunday 29 July 2012 #OHM2012

natalichka
since school days.. this place has always given me a calm stillness. so go in to look at its magnanimous beauty & to feel its energy. you do not have to be religious to enjoy something like this.. ^_^

Lisa Starbucks
No photos! You must buy a photo licence ????

The Australian Centre for the Moving Image (ACMI) is a

Federation Square (also colloquially known as Fed Square) is a

The Sandridge Bridge is a historic former railway bridge over the

Melbourne, Australia's Chinatown is located within the Melbourne

Canterbury Cathedral in Canterbury, Kent, is one of the oldest and 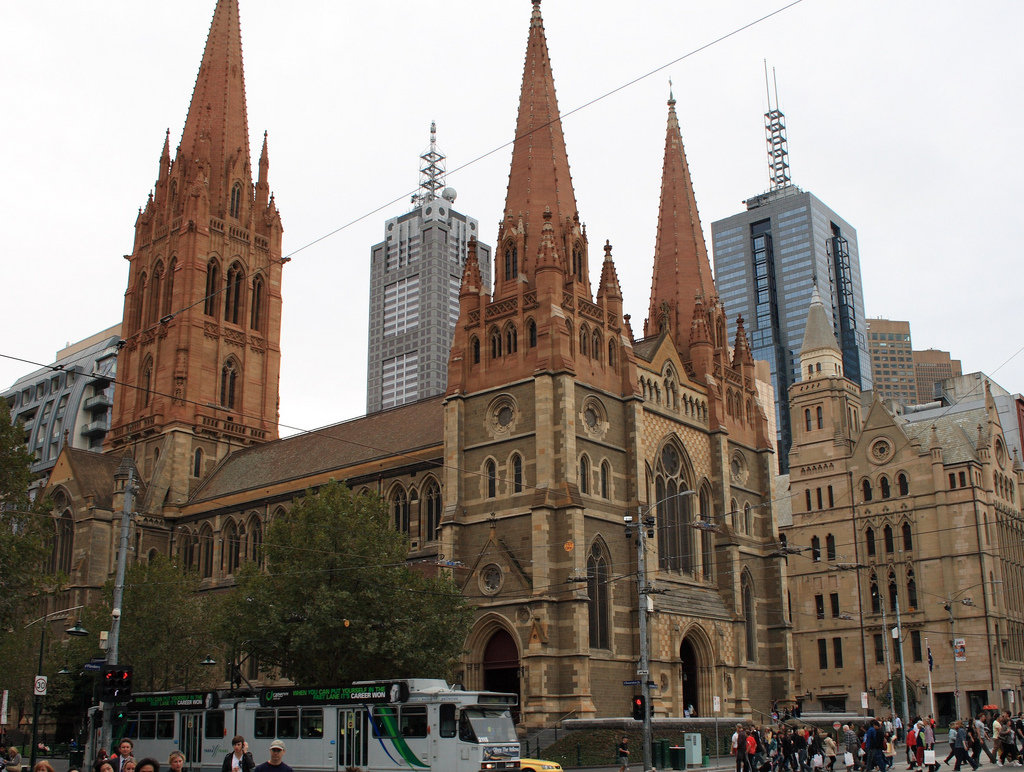 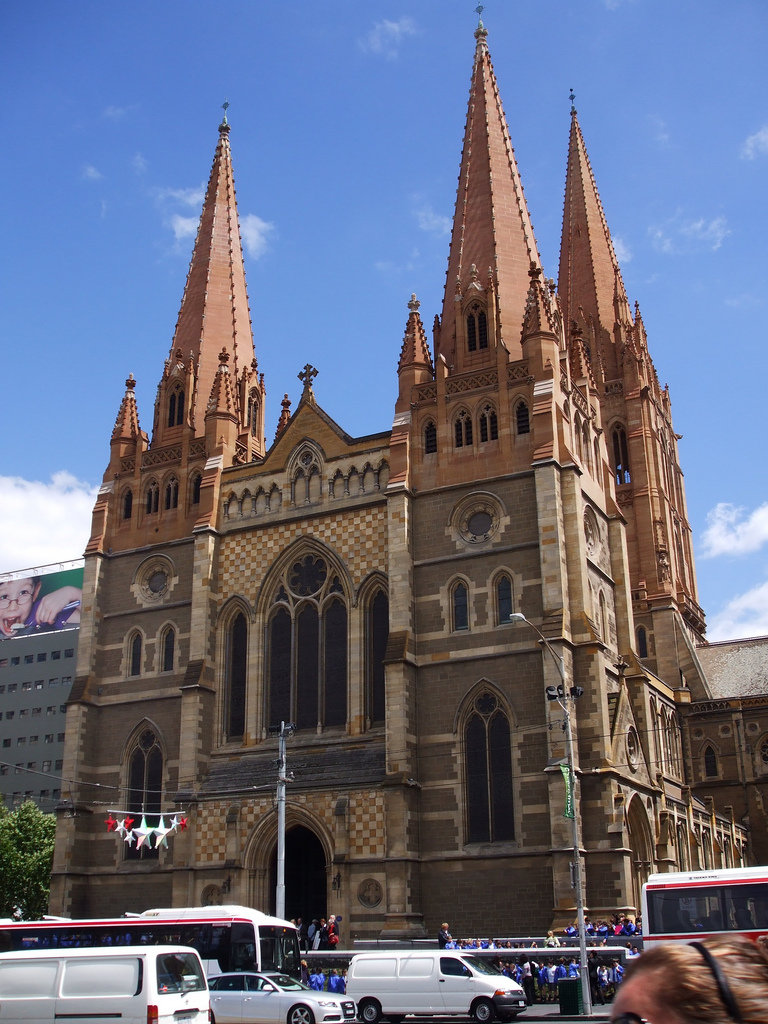 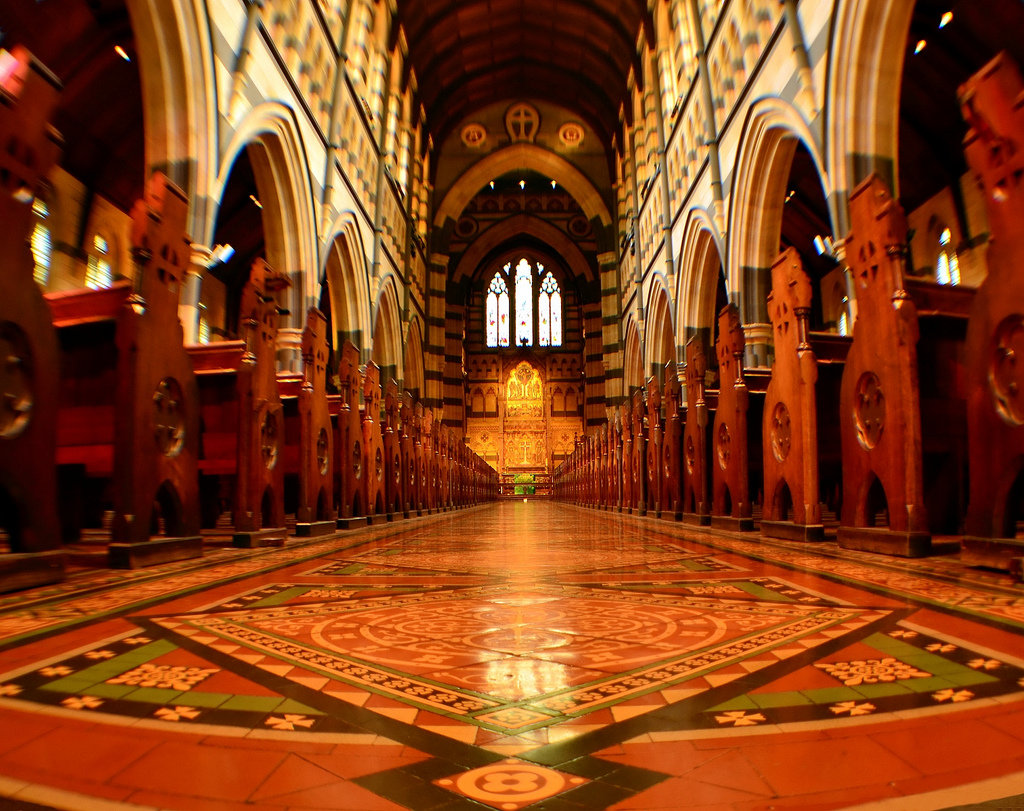