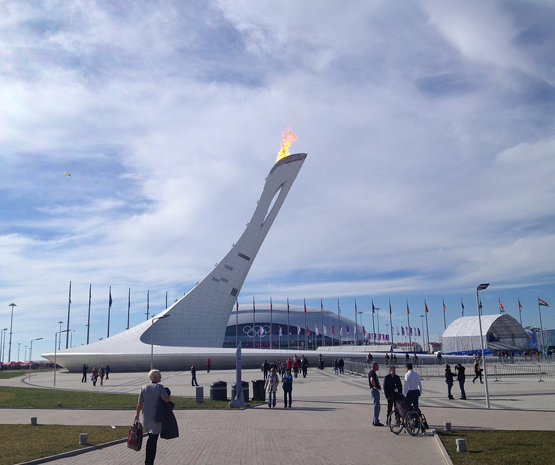 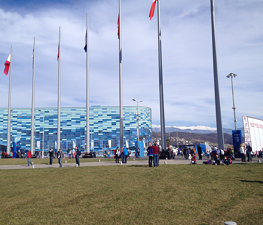 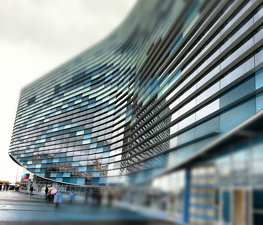 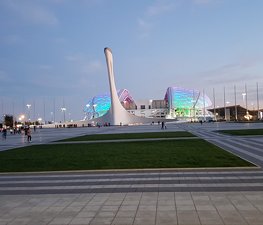 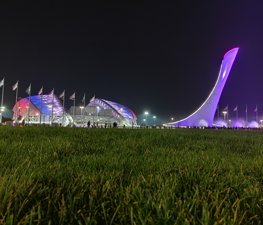 Sochi Olympic Park is an Olympic Park that was constructed for the 2014 Winter Olympics and 2014 Winter Paralympics. Located in the Adler City District of Sochi, Imeretinsky Valley, on the Black Sea (about 4 km, or 2.5 miles) from Russia's border with Abkhazia/Georgia), the Olympic Park houses the main Olympic Stadium used for the Games' ceremonies, and the venues that were used for indoor sports such as hockey, figure skating, curling, and speed skating. It also houses training facilities, the Olympic Village, the international broadcasting centre, and other amenities. The park was designed so that all of the venues would be accessible within walking distance of each other. The venues are situated around a water basin containing a fountain known as "The Waters of the Olympic Park"; designed by California-based WET (which also designed the cauldron for the 2002 Winter Olympics in Salt Lake City), the fountain measures 5.3 meters in diameter with a capacity of about 700,000 gallons of water, featuring more than 250 nozzles and jet systems that can create fog and choreographed water displays set to music.

Within the Olympic Park lies a 2-acre cemetery, which predates the Olympic venues by nearly a century. The cemetery, which dates back to 1915, contains the graves of individuals that belonged to the Old Believers faith. The cemetery is located between the Iceberg Skating Palace, Fisht Stadium, and the medals plaza. It is located in a circular grove, but is largely obscured by plants. During the Olympic and Paralympic games, Canada and the United States had National Houses located near the graveyard on the end opposite to the medals plaza. Dmitry Chernyshenko, the president and CEO of the Sochi Organizing Committee, claimed in a September 2013 New York Times interview that the cemetery was retained both in good-will, and due to Russian law forbidding the moving of the graves. A cemetery needs to have had no new burials for at least a half-century, and only through the decision of relatives of those buried could a cemetery be considered for relocation. Burials are still ongoing at the cemetery.

For the Olympics, a railway line was built connecting the Olympic Village with the airport, Sochi Olympic Village, central Sochi, and the station in Krasnaya Polyana (home to the mountain-cluster of Olympic venues). A highway was also built alongside this to further connect the Olympic Park to this area.

The Olympic Park was originally going to be serviced by several stations along the planned Sochi Metro, before that project was cancelled.

Sochi was originally scheduled to host the 40th G8 summit 4–5 June 2014. On 24 March 2014, the other seven member nations decided that a summit would instead be held in Brussels, Belgium, without Russia's participation. It was held in Brussels on the same dates it was planned for in Sochi. The decision to suspend Russia from the organization was in response to the 2014 Crimean crisis and accompanying Russian intervention in Crimea. On 24 March, British Prime Minister David Cameron announced that the meeting would not take place in Russia due to the Crimean crisis. Traditionally, the host country of the G8 summit sets the agenda. Presidential Executive Office Chief of Staff Sergei Ivanov was the chairman of the organizational committee on preparation for Russia's G8 presidency. In Sochi, leaders were expected to focus on responses to new global threats during the next G8 summit. The infrastructure of the 2014 Winter Olympics at Sochi was planned to be used to host the G8 summit. No additional pre-summit costs were budgeted.

Beste GÜLÇÜR KAPLAN
The park is very nice, I liked it so much. I was there a few days ago, the weather was rainy so we couldn't enjoy it much. I think it is better to visit there in May.

Aolani Smythe
The most amazing extravagant Olympics in the history at this beautiful Olympic Park! Truly a must in the bucket list! Sochi nailed it! Very unforgettable memoir! Kudos hats off!! Very innovative!

Aolani Smythe
Mesmerized atm, how diversity of humanity ruled out against all critics controversial negativity through legendary Olympics sports at this breathtaking Sochi Olympic Park. What a bucket list indeed! ♥

Stas Slender
Cool place to ride a bike (you can rent it there) and see the Olympic buildings.

Travel.gc.ca - Travel Advice for Canadians
Canadians at the Sochi Olympic Park: Don't forget to register with us for safety updates. Enjoy the games!
Load more comments
foursquare.com
8.2/10
Denis Kruchkov, Chris Romas and 139,430 more people have been here
I've been here
Add to wishlist

Olympic Flame, Sochi is a tourist attraction, one of the Monuments

The Bolshoy Ice Dome (Russian: Большой Ледовый дворец) is a 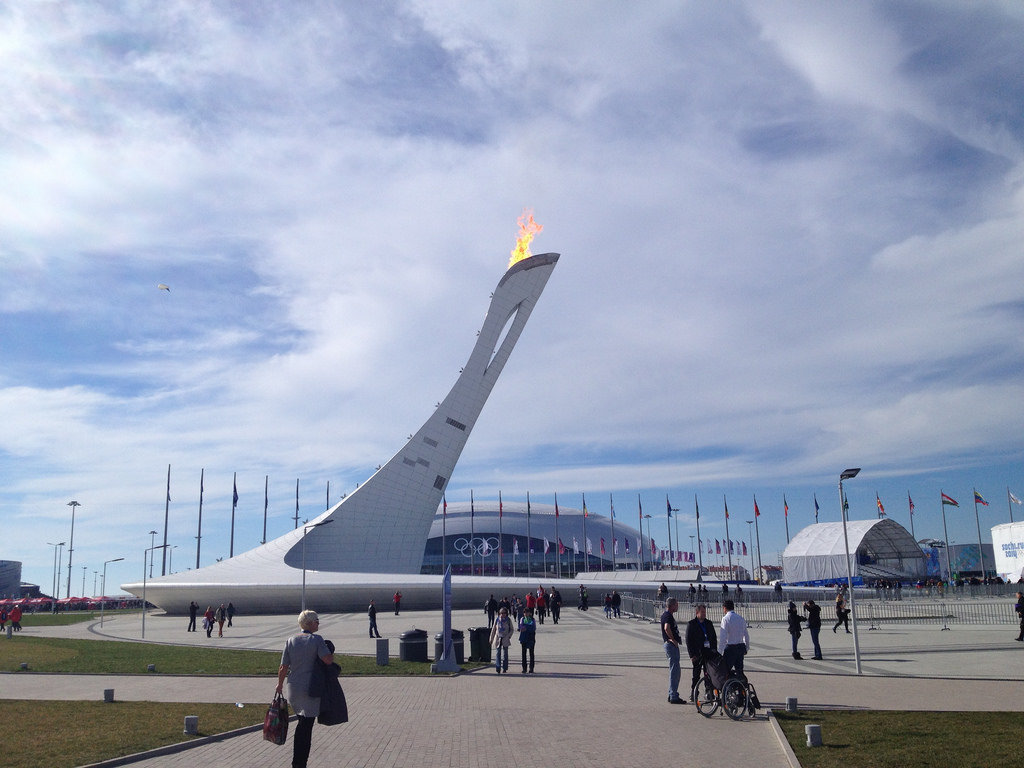 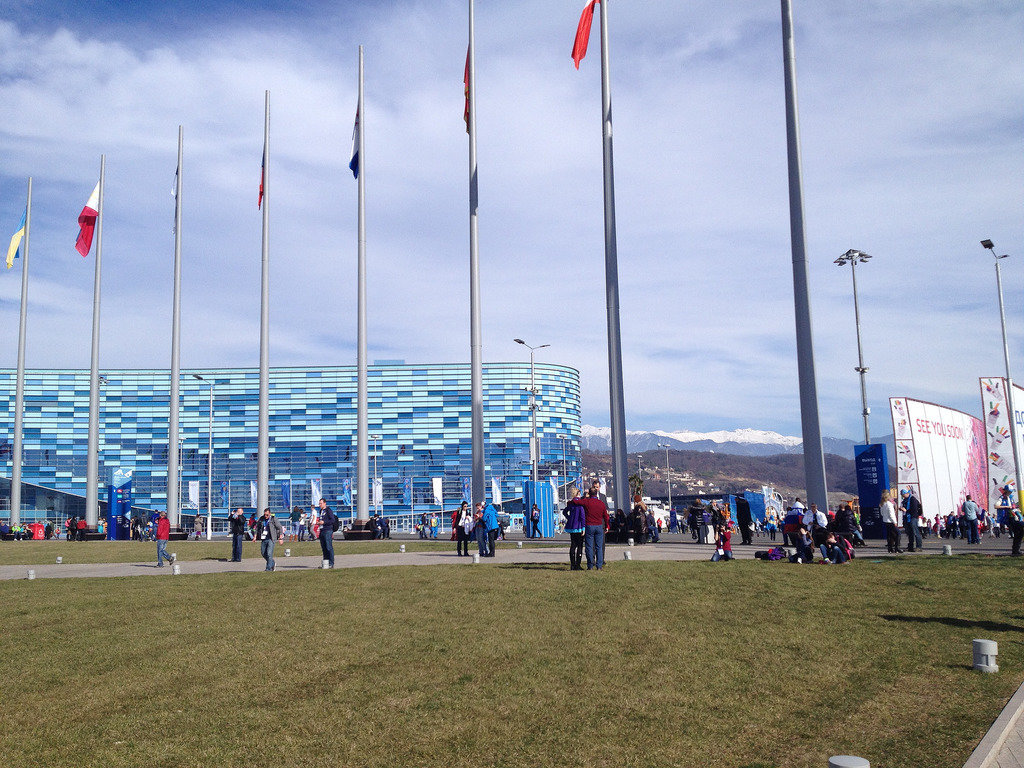 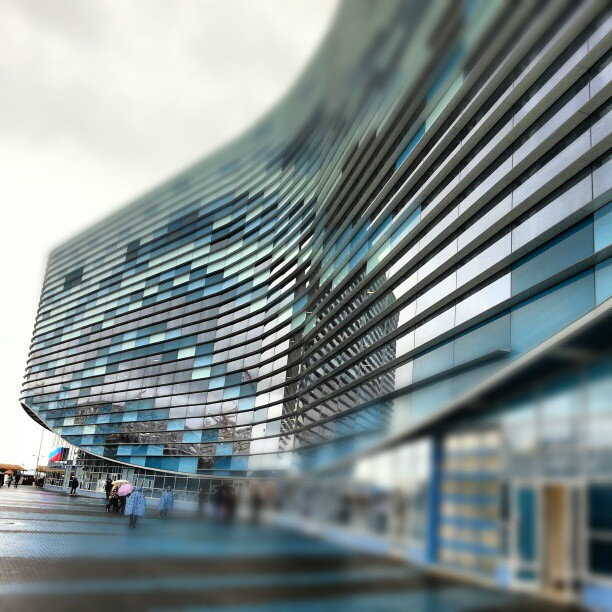 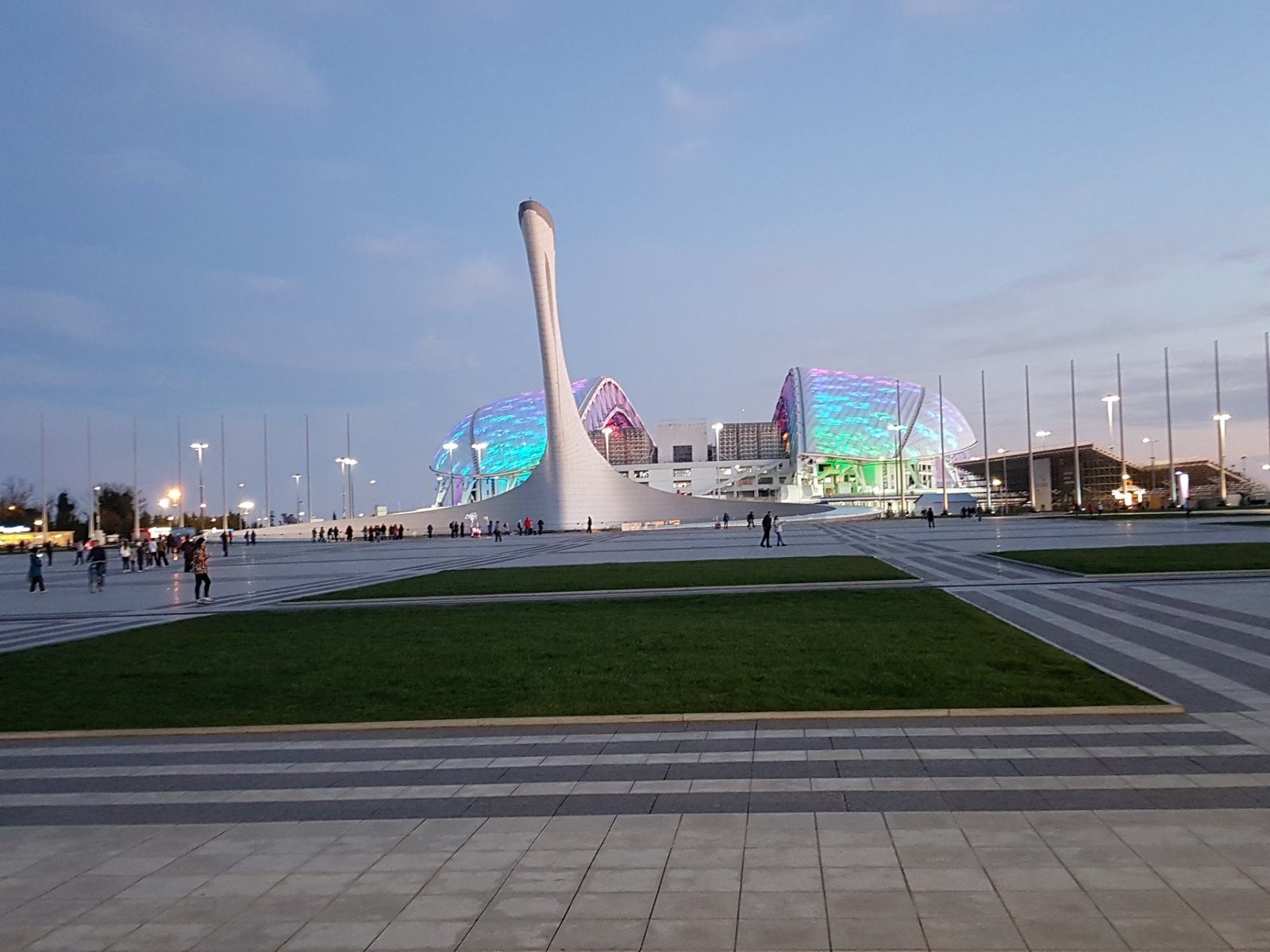 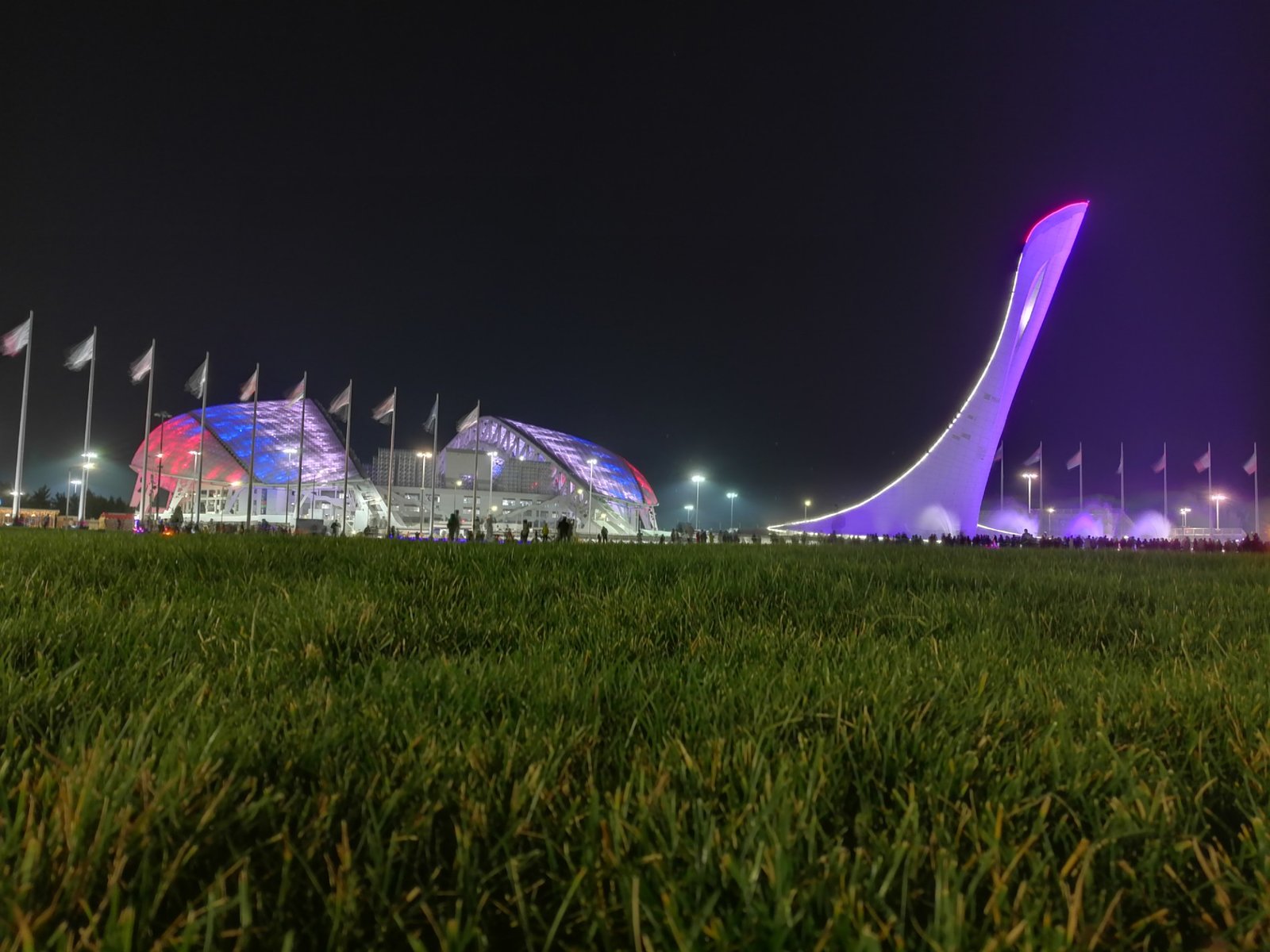 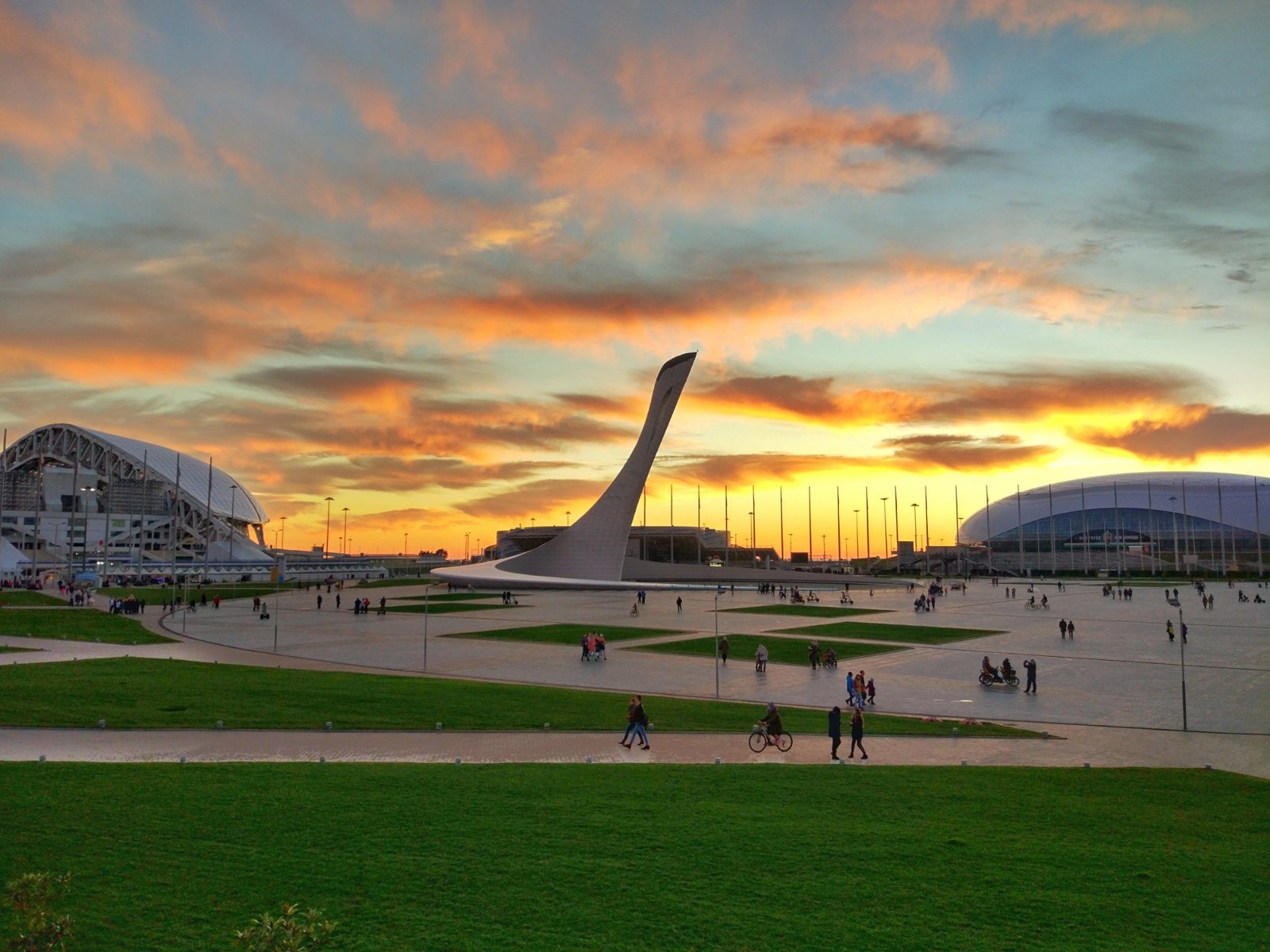 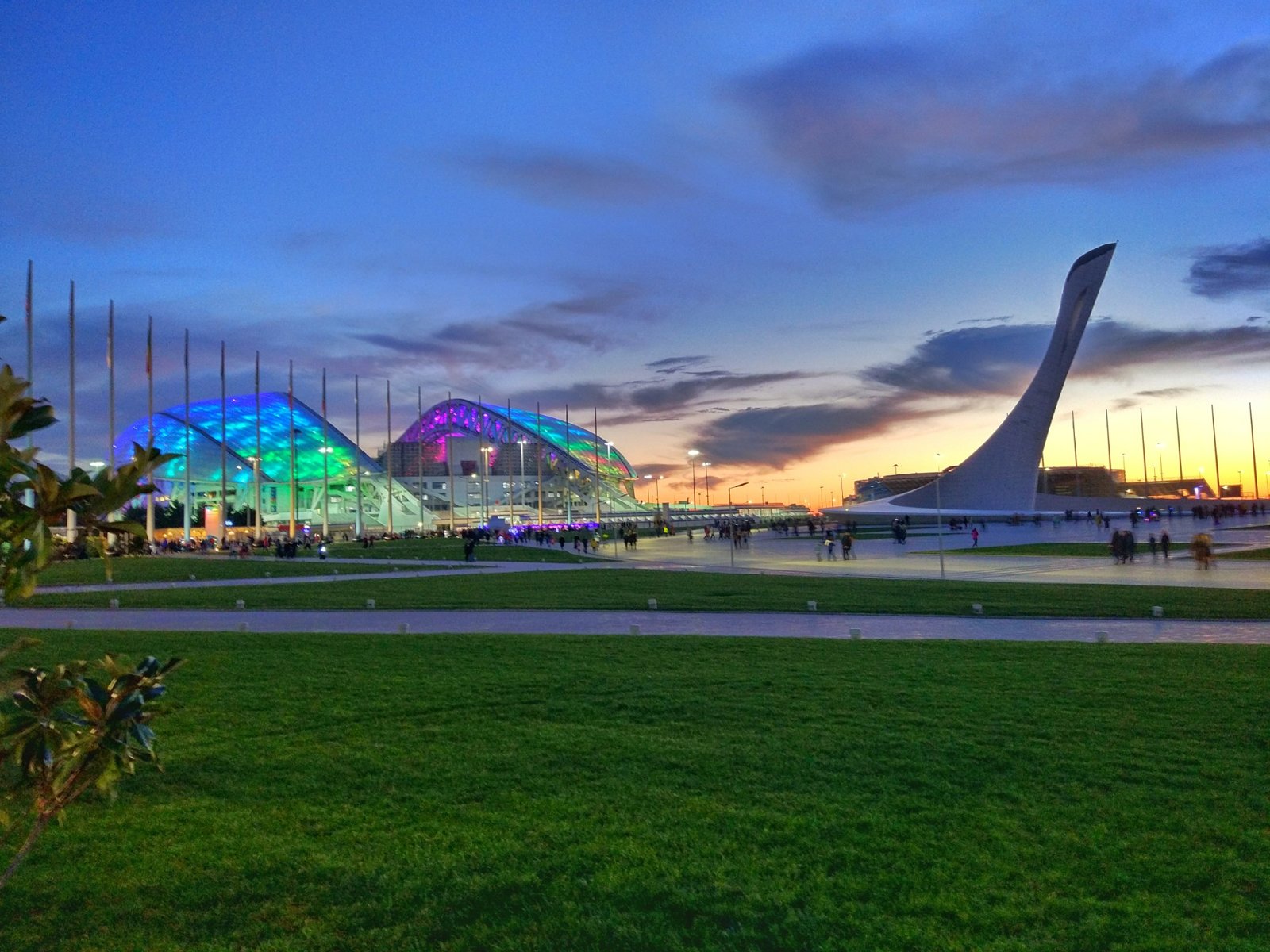 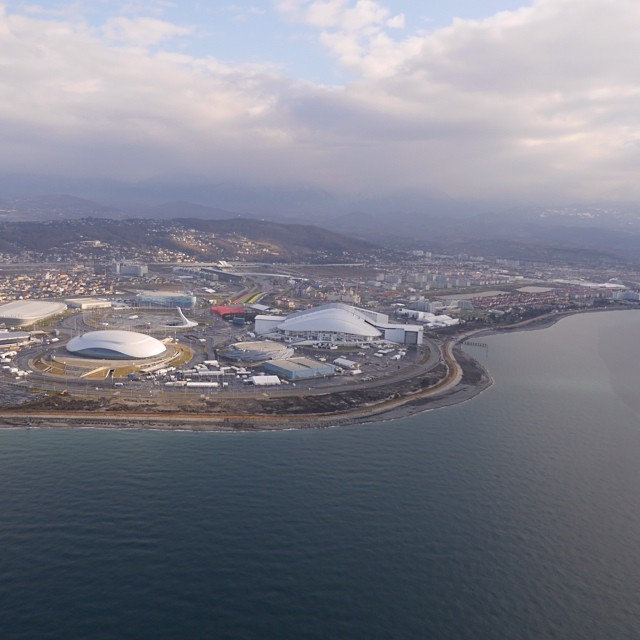 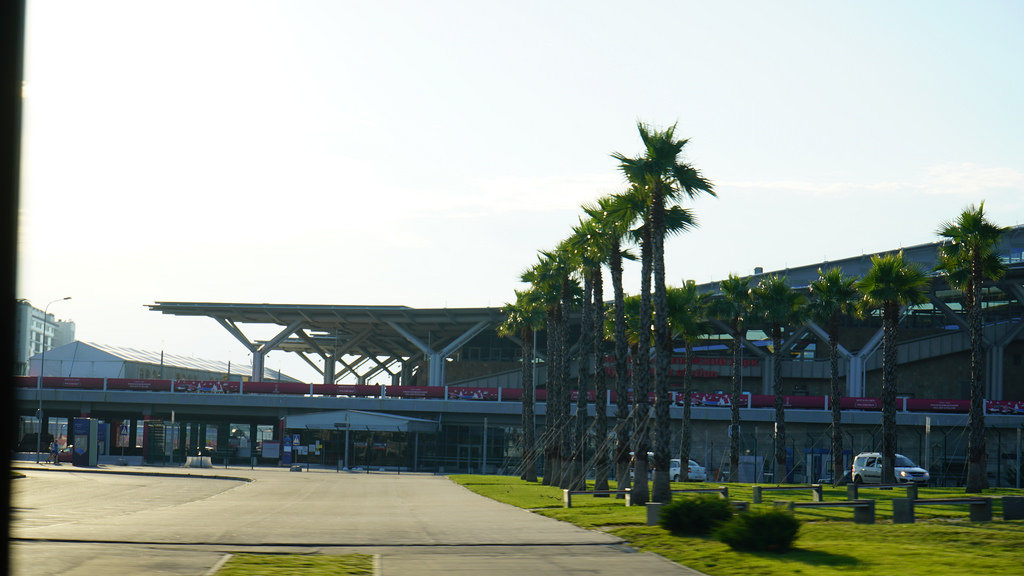