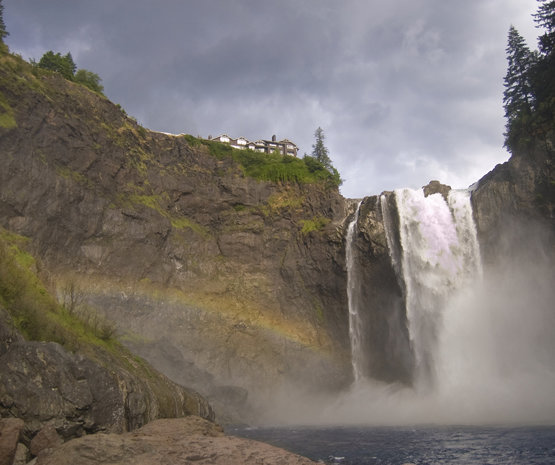 Snoqualmie Falls is a 268 ft (82 m) waterfall on the Snoqualmie River between Snoqualmie and Fall City, Washington, USA. It is one of Washington's most popular scenic attractions, but is perhaps best known internationally for its appearance in the cult television series Twin Peaks. More than 1.5 million visitors come to the Falls every year, where there is a two acre (0.8 ha) park, an observation deck, and a gift shop.

Most of the river is diverted into the power plants, but at times the river is high enough to flow across the entire precipice, which creates an almost blinding spray. High water occurs following a period of heavy rains or snow followed by warm rainy weather. This can occur during the rainy season which lasts from November through March. During high water, the falls take on a curtain form.

For the Snoqualmie People, who have lived for centuries in the Snoqualmie Valley in western Washington, Snoqualmie Falls is central to their culture, beliefs, and spirituality. A traditional burial site, to the Snoqualmie, the falls are "the place where First Woman and First Man were created by Moon the Transformer" and "where prayers were carried up to the Creator by great mists that rise from the powerful flow." The mists rising from the base of the waterfall are said to serve to connect Heaven and Earth.

There are two hydroelectric power plants at Snoqualmie Falls, both currently operated by Puget Sound Energy. Power plant 1 was built in 1898 and operates at the base of the falls embedded in the rock Шаблон:Convert below the surface. It was the world's first completely underground power plant. Power plant 2 was built in 1910 and further expanded in 1957, and is located a short distance downstream of the falls. Approximately 1% of Puget Sound Energy sales comes from the plant. These two power plants provide 44,000 kilowatts of electricity, which is enough to service 16,000 average homes.

The 1898 generating system was designated an ASCE Civil Engineering Landmark in 1981.

The town of Snoqualmie Falls was located near the waterfall. It was associated with the Weyerhaeuser mill there. It had many structures, including an hospital, a school, community center, and many homes. When the town disbanded, many houses were moved to the nearby town of Snoqualmie.

The historic Salish Lodge & Spa overlooks Snoqualmie Falls. The original building on the site was erected in 1919. For 70 years, a small inn known as the Snoqualmie Falls Lodge catered to travelers to the falls with comfort foods. Generations of Puget-Sound area residents took family outings to the Lodge to enjoy the scenic view, country hospitality, and famous specialty breakfasts.

In July 1986, the real estate subsidiary of Puget Sound Energy (which owned the land) terminated the lodge's lease as part of a major redevelopment project in conjunction with Salish Resorts. The 1919 lodge structure was completely remodeled and reopened in 1988 as the 89-room Salish Lodge & Spa. The fireplace is the only remaining part of the original structure. The dining room continues to be recommended worldwide for its lodging, spa, and multi-course country breakfast.

In Twin Peaks, the building stands in for exterior shots of the Great Northern Hotel.

The top of the waterfall is less than Шаблон:Convert from the parking lot, which has a gift shop, espresso stand, and bathrooms. The main views are from the side of the falls, with a fence separating visitors from the edge of a cliff. This area has picnic tables and benches, and a small grassy meadow called the Centennial Green, where weddings are performed through the summer. Here, the river trail descends 300 feet in half a mile passing though temperate rain forest with moss covered Bigleaf Maple, Douglas-fir, Sword Fern and Salal and places to step off the trail and rest or enjoy the scenery. Heavy use makes wildlife sightings uncommon. The park does allow pets. At the bottom of the trail is the 1910 powerhouse, not open to visitors, and a view of the falls. Шаблон:Asof, the trail is expected to be closed until fall of 2013.

Connie Lu
Right outside of the city just 40 minutes east, you can get away from the city and experience Washington's natural beauty. Try to go on a day hike, but if not, the falls is a nice view.

Dianne Carty
Scenic views, nature. Trail down to falls very steep, do not attemp unless 1) you're a hiker or 2) someone can drive down to bottom of falls to get you. Top and bottom of falls, ADA accessible.

Andrew J
Beautiful scenery. The waterfall is breathtaking, and the mist creates an amazing atmosphere for photography. You can even go for a hike down to the bottom of the falls!

Carla Jean
Snoqualmie Falls Is SO PRETTY!! Bring Your Camera & Catch A Rainbow!! I Love Waterfalls, I Find Them To Be Very Romantic <3

Tony Gilbert
Wow... do NOT go on a holiday weekend, or during the summer. Best time to visit is during the week, in the morning or later afternoon/evening. Parking on the "upper lot" is easiest. (Across the road.)
Load more comments
foursquare.com
9.1/10
Asic Fox, Jenia Varavva and 73,123 more people have been here
I've been here
Add to wishlist

The Northwest Railway Museum is a railroad museum in Snoqualmie, King

Camlann Medieval Village is a living history museum which recreates

The Lacey V. Murrow Memorial Bridge is a floating bridge that carries

Add to wishlist
I've been here
Visited
Museum of Flight 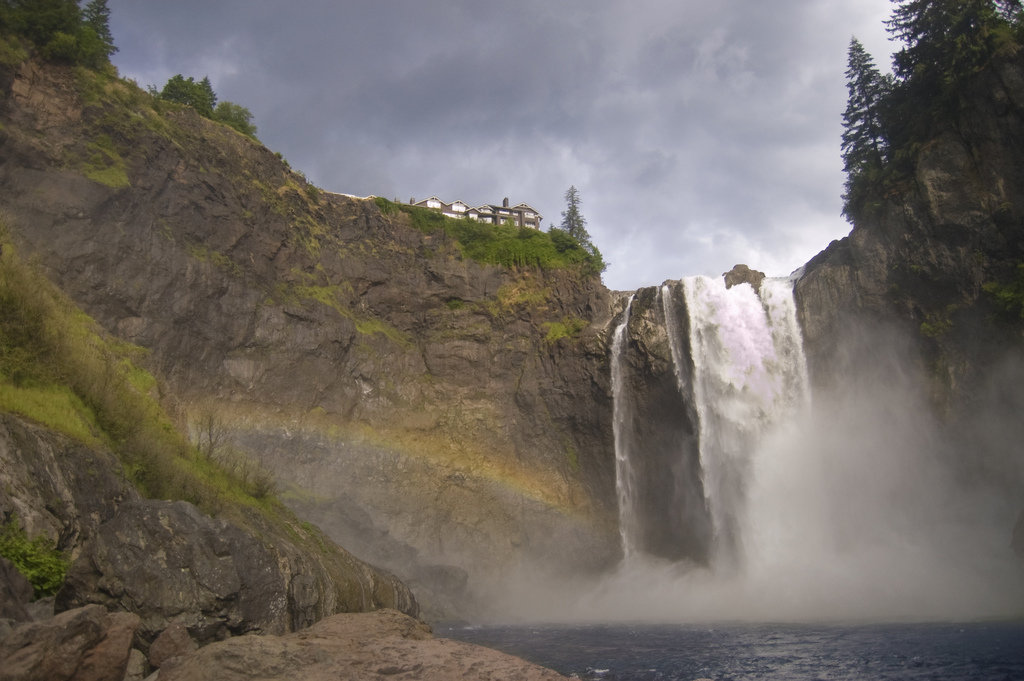 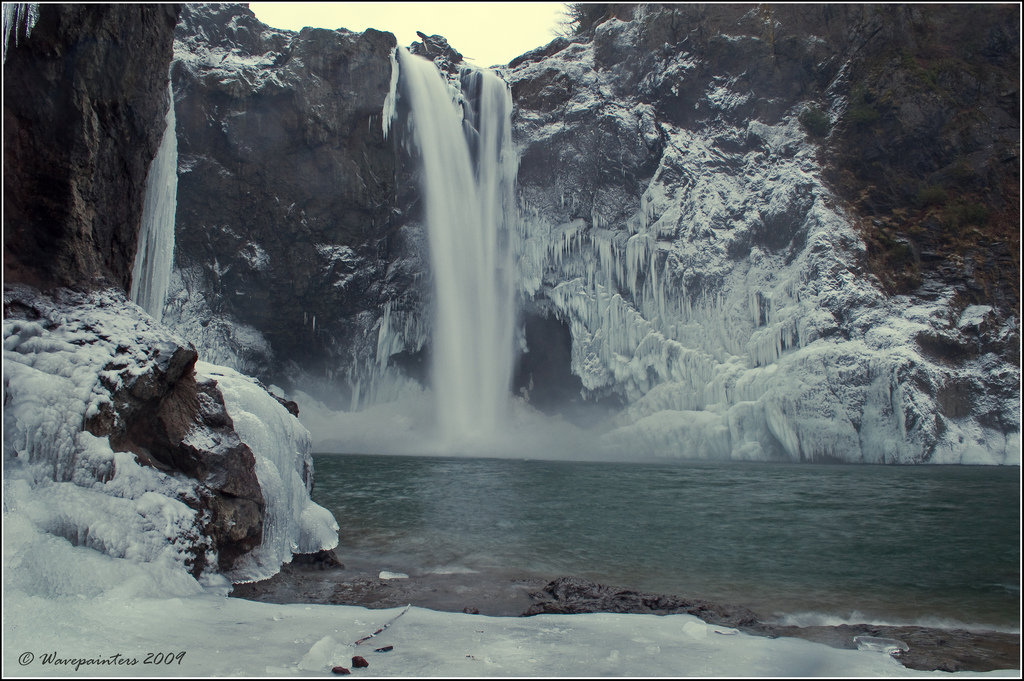