×
What are you looking for?
See all results
Botanical gardens in Singapore

The Singapore Botanic Gardens (Chinese: Шаблон:Lang; Bahasa Melayu. Taman Botanik Singapura or Kebun Botani Singapura) is a 63.7-hectare (157-acre) botanical garden in Singapore. It is half the size of the Royal Botanic Gardens in Kew or around one-fifth the size of Central Park in New York. It is the only botanic garden in the world that opens from 5 a.m. to 12 midnight every single day of the year, and does not charge an admission fee, except for the National Orchid Garden. The garden is bordered by Holland Road and Napier Road to the south, Cluny Road to the east, Tyersall Avenue and Cluny Park Road to the west and Bukit Timah Road to the North. The linear distance between the northern and southern ends is around 2.5 km (1.5 miles).

The first "Botanical and Experimental Garden" in Singapore was established in 1822 on Government Hill at Fort Canning by Sir Stamford Raffles, the founder of modern Singapore and a keen naturalist. The Garden's main task was to evaluate for cultivation crops which were of potential economic importance, including those yielding fruits, vegetables, spices and other raw materials. This first Garden closed in 1829.

It was not until 30 years later that the present Singapore Botanic Gardens began in 1859, when the Agri Horticultural Society was granted 32 hectares of land in Tanglin by the colonial government, which had obtained it from the merchant Hoo Ah Kay, known as Whampoa, in exchange for land at Boat Quay.

Laurence Niven was hired as superintendent and landscape designer to turn what were essentially overgrown plantations and a tangle of virgin rainforest into a public park. The layout of the Gardens as it is today is largely based on Niven's design. The Agri Horticultural Society, however, ran out of funds and, in 1874, the colonial government took over the management of the Gardens.

The first rubber seedlings came to the gardens from Kew in 1877. A naturalist, Henry Nicholas Ridley, or Mad Ridley as he was known, became director of the gardens in 1888 and spearheaded rubber cultivation. Successful in his experiments with rubber planting, Ridley convinced planters across Malaya to adopt his methods. The results were astounding; Malaya became the world's number one producer and exporter of natural rubber.

Another achievement was the pioneering of orchid hybridisation by Professor Eric Holttum, director of the Gardens from 1925 to 1949. His techniques led to Singapore being one of the world's top centres of commercial orchid growing. Today it also has the largest collection of tropical plant specimens.

During the Japanese occupation of Singapore from 1942 to 1945, Hidezo Tanakadate, a professor of geology from Tohoku Imperial University, took over control of the Singapore Botanic Gardens and the Raffles Museum. At the beginning of the occupation, he ensured that no looting occurred in the Gardens and the Museum. Both institutions continued to function as scientific institutions. Holttum and Edred John Henry Corner were interned in the Gardens and instructed to continue their horticultural work. The Gardens was also renamed as Shōnan Botanic Gardens (Шаблон:Lang). Later that year, Dr. Kwan Koriba, a retired professor of botany from the Imperial University of Tokyo, arrived as Director of the Gardens, a post he held until the end of the war.

After the war, the Gardens was handed back to the control of the British. Murray Ross Henderson, curator of the Herbarium before the war, succeeded Holttum as director from 1949 to 1954. Eventually the Gardens played an important role during the "greening Singapore" campaign and Garden City campaign during the early independence years.

The National Orchid Garden is the main attraction within the Botanic Gardens. Located on the mid-western side of the Garden, the hilly three-hectare site has a collection of more than 1,000 species and 2,000 hybrids of orchids.

Within the Orchid Garden there are a number of attractions such as the following:

Burkill Hall and the VIP Orchid Garden: Burkill Hall is a colonial plantation bungalow built in 1886. It used to be the director's house and was named in honour of the only father and son pair to hold the post of Director of Singapore Botanic Gardens, Isaac and Humphrey Burkill. The ground level serves as an exhibition area, showcasing information on the different hybrids named after VIPs who have visited the garden.

At the back of Burkill Hall is the VIP Orchid Garden with hybrids of some of the VIP orchids on display. Notable ones include Dendrobium Margaret Thatcher, Renantanda Akihito, Dendrobium Masako Kotaishi Hidenka, Dendrobium Elizabeth and Vanda Gloria Macapagal-Arroyo.

Orchidarium: A haven for serious orchids enthusiasts, the Orchidarium houses natural species in a tropical setting.

Lady Yuen-Peng McNeice Bromeliad House: Named in honour of its sponsor, the Bromeliad House showcases plants from the Bromeliaceae family, which includes the pineapple. The unique collection of bromeliads on display was acquired from Shelldance Nursery in the United States in 1994.

The 9.9-hectare (3.7-acre) Evolution Garden is located within the Central Core area of the Gardens. It tells the evolutionary story of plant life on Earth throughout the ages.

Located next to the National Orchid Garden, this one-hectare garden brings together members of the Zingiberaceae family. The garden houses a restaurant called Halia Restaurant. There is also a drop-off point along Tyersall Avenue as well as a waterfall. The garden was officially opened in 2003 and it took over the spot vacated by the previous Orchid Enclosure.

The reopened Tanglin Gate has been given a new look. Gone is the old cast iron gate; it now sports a more modern silver colour with a leaf motif as its main design.

The two new blocks of offices and classroom in the upgraded Tanglin Core area are known as the Botany Centre. They house the:

The corridors and walkways of the Botany Centre are covered by leaf imprints. There are also a number of wooden carvings scattered around the grounds, and fern-covered vertical walls.

The Green Pavilion is the first "green roof" in Singapore. Weed- and grass-like plants fully cover the pitched roof. It houses the visitor services desk as well as a food court, Inside Green, in its basement.

The offices of former directors, namely Holttum Hall (after Eric Holttum, Director of the Gardens from 1925 to 1949) and Ridley Hall (after Henry Nicholas Ridley, first director of Gardens from 1888 to 1911) were preserved and now serve as the Singapore Botanic Gardens' Directorate and Visitor Management and Operations offices.

The Children's Garden was named after its main donor Jacob Ballas, a Jewish-Singaporean philanthropist who died in 2004.

Built at a cost of S$7 million (of which $99 million was donated by the Jacob Ballas Trust and sponsors), it is located at the quieter northern end of the Botanic Gardens. It has its own visitor centre with a café. It opened on Children's Day, 1 October 2007. The National Parks Board claims it is Asia's first children's garden. There are play areas like the Water Play area, a small playground, tree-houses with slides, and a maze. There are also interactive exhibits that teach how photosynthesis takes place, and a mini-garden that showcases how plants may be used to make dyes and beverages, or as herbs.

At the Children's Garden Visitor Centre there is a sculpture by the Israeli artist Zodok Ben-David. Named Mystree, it was commissioned by the Yad Vashem museum in 2010. From a distance, the sculpture looks like a tree but a closer inspection reveals 500 human figures.

Although it is part of the Botanic Garden, the Children's Garden has its own entrance along Bukit Timah Road.

Tropical plants line the bank of the Saraca Stream as it meanders its way down a small hill. The main highlights of the stream walk are the Yellow Saraca trees (Saraca cauliflora) and Red Saraca (Saraca declinata). Other attractions include the Palm Valley, Bandstand area, Sun Garden and Sundial Garden.

The headquarters of the National Parks Board is located within the grounds of the Singapore Botanic Gardens. Eateries within the garden include Au Jardin Les Amis, a French fine-dining restaurant in a colonial bungalow; Café Les Amis, a café at the Visitor Centre; and Halia Restaurant, a restaurant at the Ginger Garden. There are also gift shops for visitors.

Singapore's national agency in biodiversity-related issues, the National Biodiversity Centre, is also located within the grounds of the gardens.

Botanic Gardens MRT Station will be located at the northwestern part of the Bukit Timah Core area of the Gardens. The station is part of the Circle Line, and is due to open in 2010. It will be an interchange station for the proposed Downtown Line's Bukit Timah Section. With the opening of the station, getting to the Gardens using public transportation will be far more convenient.

During the launch of the Children's Garden, the Chief Executive Officer of the National Parks Board mentioned that the Singapore Botanic Gardens will be expanded to include another 11 hectares of land. The land was previously occupied by the Singapore Management University. The Board also revealed that it would spend some $30 million to build five thematic gardens on the newly acquired land. The first garden will be the Healing Garden, expected to open by the first half of 2010. The other four will be the Fragrant Garden, Terrace Garden, Foliage Valley and Ethnobotany Garden. However, if past projects are any indication, these projects may not open on time. For example, the Botany Centre and Tanglin Redevelopment was supposed to open by 2005 but did not open till 2006. The Children's Garden was supposed to be completed by 2006 but did not open till October 2007.

Core of the Singapore Botanic Gardens]]

Steve J
Best place to jog and take the kids in Singapore. Jacob Ballas, the lake near Botanic Garden MRT has 100+ turtles and a black swan, red brick walk has a nice incline for jogging.

Natalya Shanty
The best place for walking dogs!There are always so many different breed of dogs and everyone is very friendly and fostered.Also,there are very nice restaurant and cafe, and the garden of orchid is ????

Q ♡
It is indeed the best botanic garden in the world! The rainforest is a must see, it feels like the real Amazon there. And do not leave before taking a walk around the symphony lake. Simply beautiful!!

Mag TY
Beautiful place for an early morning sojourn - after 10am can be a bit hot. SG own world heritage site: http://accidentalsingaporetourist.blogspot.sg/2015/07/accidental-tourist-in-singapore.html?m=1

Cheen The Curious
Garden sculptures. They add beauty to the garden. See if you spot Girl on a Swing, Swing Me Mama & Chang Kuda, amongst of the foliage -- some hidden right in front of u ;-)
Load more comments
foursquare.com

The development's observation deck, ION Sky, is located on the 55th

The Istana Park (Chinese: 总统府公园) is a park in Singapore, located i

The Garden Society of Gothenburg (svenska. Trädgårdsföreningen) is a 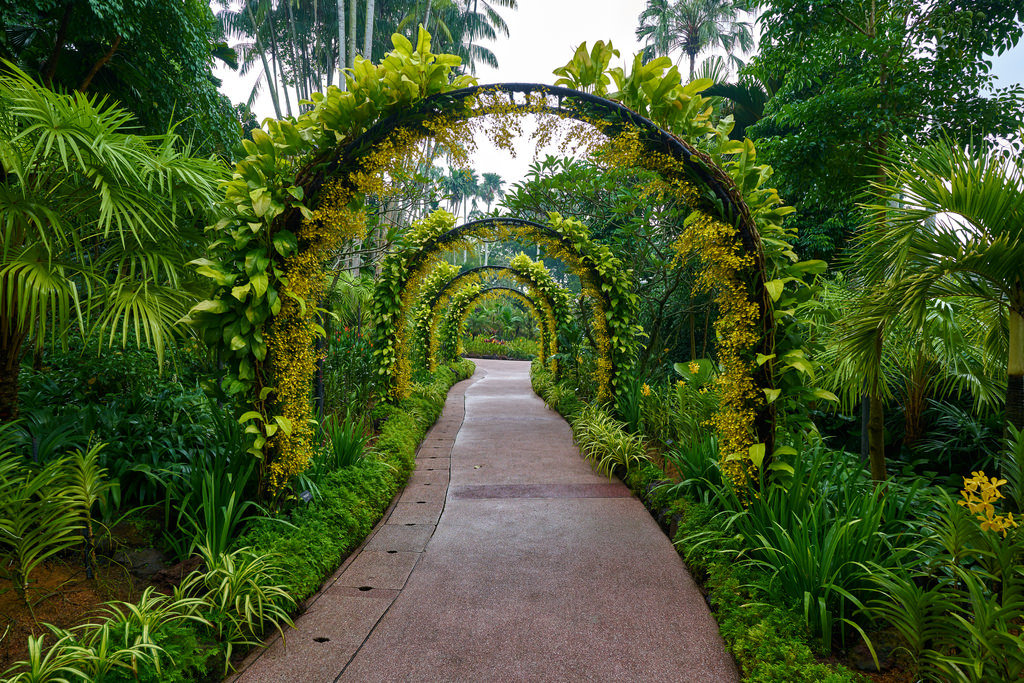 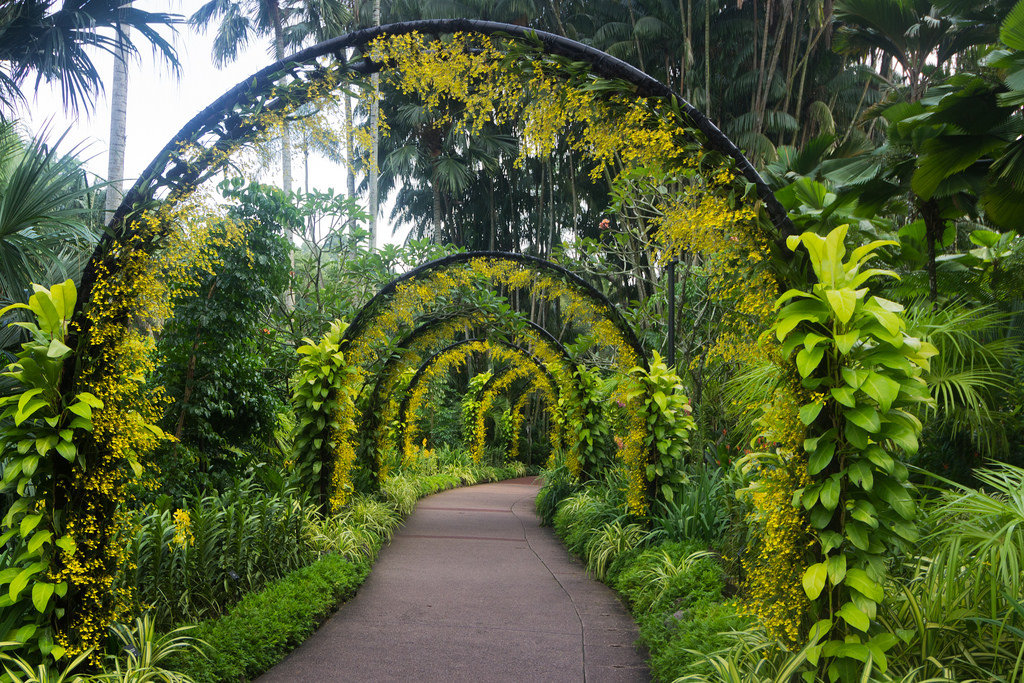