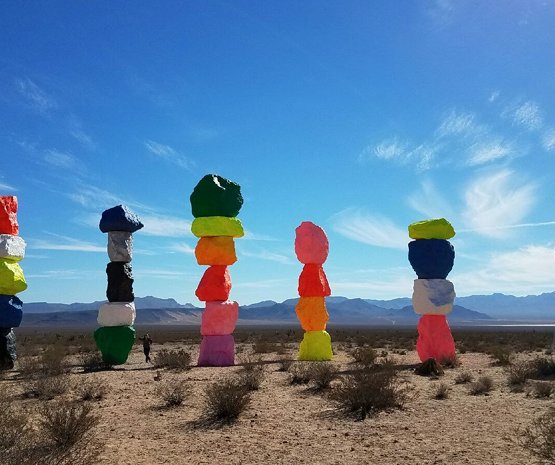 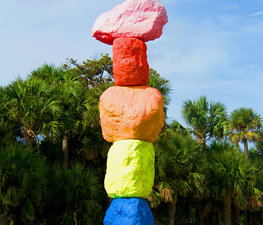 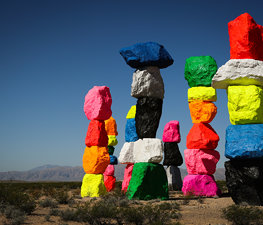 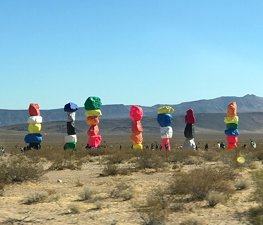 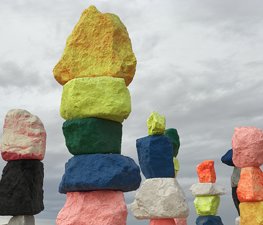 Ugo Rondinone (born 1964) is a New York-based, Swiss-born mixed-media artist noted for a range of contemporary paintings and sculptures.

Ugo Rondinone was born in 1964 to Italian parents in the resort town of Brunnen, Switzerland. He moved to Zurich in 1983 to become the assistant to Hermann Nitsch and studied at the Hochschule für angewandte Kunst in Wien, from 1986 to 1990. In 1998 he moved to New York City, where he continues to live and work.

Rondinone emerged as an artist in the 1990s. His paintings are noted for their brightly colored, concentric rings of target-shapes; and strictly black and white landscapes of gnarled trees.

Since 1997, Rondinone has included the practice of making signs in his varied oeuvre; he takes phrases from pop songs and everyday exclamations and makes them into rainbow-hued, neon-lit sculptures, including Hell, Yes (2001). Another series of installations, Clockwork for Oracles (2008-2010) consists of mirrored works that are hung salon-style over a wall of pages from the local paper sourced at the time of installation.

Rondinone’s totem-like figures have been installed all over the world, from the Jardin des Tuileries in Paris (2009) to the Yokohama Triennale (2011). In 2013 he exhibited an installation called Human Nature at Rockefeller Center, a group of nine monumental figures made of rough-hewn slabs of bluestone from a quarry in Northern Pennsylvania, resembling rudimentary rock totems. Similarly, Soul (2013) is a group of 37 figures from bluestone found in upstate New York, ranging from just under 3 feet to nearly 7 feet tall. Another sculptural installation, Vocabulary of Solitude (2016), involves 45 sculptures of clowns named after and positioned doing everyday tasks such as ‘wake, sit, walk and shower’.

The piece consists of 33 limestone boulders, each weighing 10 to 25 tons, arranged in seven towers 30 to 35 feet tall—secured by a solid backbone, with each stone painted a bright, fluorescent color. Approximately five years in the making, the work is located on the far southern end of Las Vegas Boulevard, 10 miles south of the intersection of Las Vegas Boulevard and St. Rose Parkway in Henderson, Nevada, near Dry Jean Lake, with a backdrop of the McCullough Mountains. It is located at .

The sculpture was organized by the Nevada Museum of Art and runs from May 11, 2016 to December 31, 2018—having originally been scheduled for two years and extended through the end of 2018. Near the end of 2018, the sculpture was again rescheduled to extend three more years. The original installation opened following a two-day inaugural event.

A special law reduces the producers’ and the artist’s liability if a member of the viewing public "does something stupid" (e.g., climbing and falling). The law, Seven Magic Mountains, NRS 41.517, is the only public-art carve-out in the country. Signs around the sculpture warn viewers of potential dangers.

The Reno Gazette-Journal estimated that more than two million people have taken photographs at the sculpture for Instagram. Vogue used the installation in a photo shoot in April 2017. It is one of the largest land-based art installations in the United States since the early 1990s.

A similar sculpture, the 35 ft Miami Mountain, built in 2015, is located outside The Bass Art Museum in Collins Park, Miami Beach, Fl, as of December 2021.

Rondinone has had major solo exhibitions at Goulandris Museum of Cycladic Art in Athens (2012), Museo de Arte Contemporáneo de Castilla y León (2009), at Whitechapel Gallery in London (2006), Le Consortium in Dijon (2004), Centre Pompidou in Paris and Museum of Contemporary Art Australia in Sydney (2003), Kunsthalle Wien in Vienna (2002), and MoMA PS1 in New York (2000). In 2007 he represented Switzerland in the 52nd Venice Biennial (with Urs Fischer) and curated “The Third Mind” at Palais de Tokyo in Paris. Rondinone’s neon sculpture Hell, Yes! (2001) was installed on the New Museum’s façade from its opening in 2007 through 2010.

Until 2013, Rondinone maintained a storefront studio at 39 Great Jones Street in the NoHo neighborhood in Manhattan. In 2011, he acquired the 20,000 sq ft (1,900 m2) former Mount Moriah Baptist Church at 2050 Fifth Avenue in Harlem for $2.8 million. Since 2014, he has been operating a second studio at his holiday home on the North Fork of Long Island. He also owns a property in Matera, Italy.

Rondinone was married to John Giorno. In 2017, he was diagnosed with high-grade bladder cancer.

"AND THE PEOPLE BOWED AND PRAYED...TO THE NEON GOD THEY MADE" — akahawkeyefan @ Flickr

Benjamin Grodsky
Fun stop on the drive in or out from Vegas. Picturesque. Great selfie spot. At sunset or sunrise would be best colors. Easy to imagine a fun movie scene shot here.

Natalie
Middle of no where but you can't miss it. Worth the drive from the strip.

Turki
If you're going to Las Vegas and have a car, I highly recommend driving about 20-30 minutes out to Seven Magic Mountains! It is a super unique and colorful public art exhibition.

Offbeat L.A.
Sponsored by the Nevada Museum of Art, these 7 Pop Art towers of colorful boulders stand more than thirty feet high and were originally given a 2-year permit, which has since been extended to 2021.

Carol
Worth visiting but go early to avoid foot traffic/ the heat. We left after 10 min because it was sweltering at 10am. Easier to get to if coming from LV because you can get on turnpike from Jean.
Load more comments
foursquare.com
9.2/10
6,442 people have been here
I've been here
Add to wishlist

The Grandview At Las Vegas

Add to wishlist
I've been here
Visited
The Roller Coaster 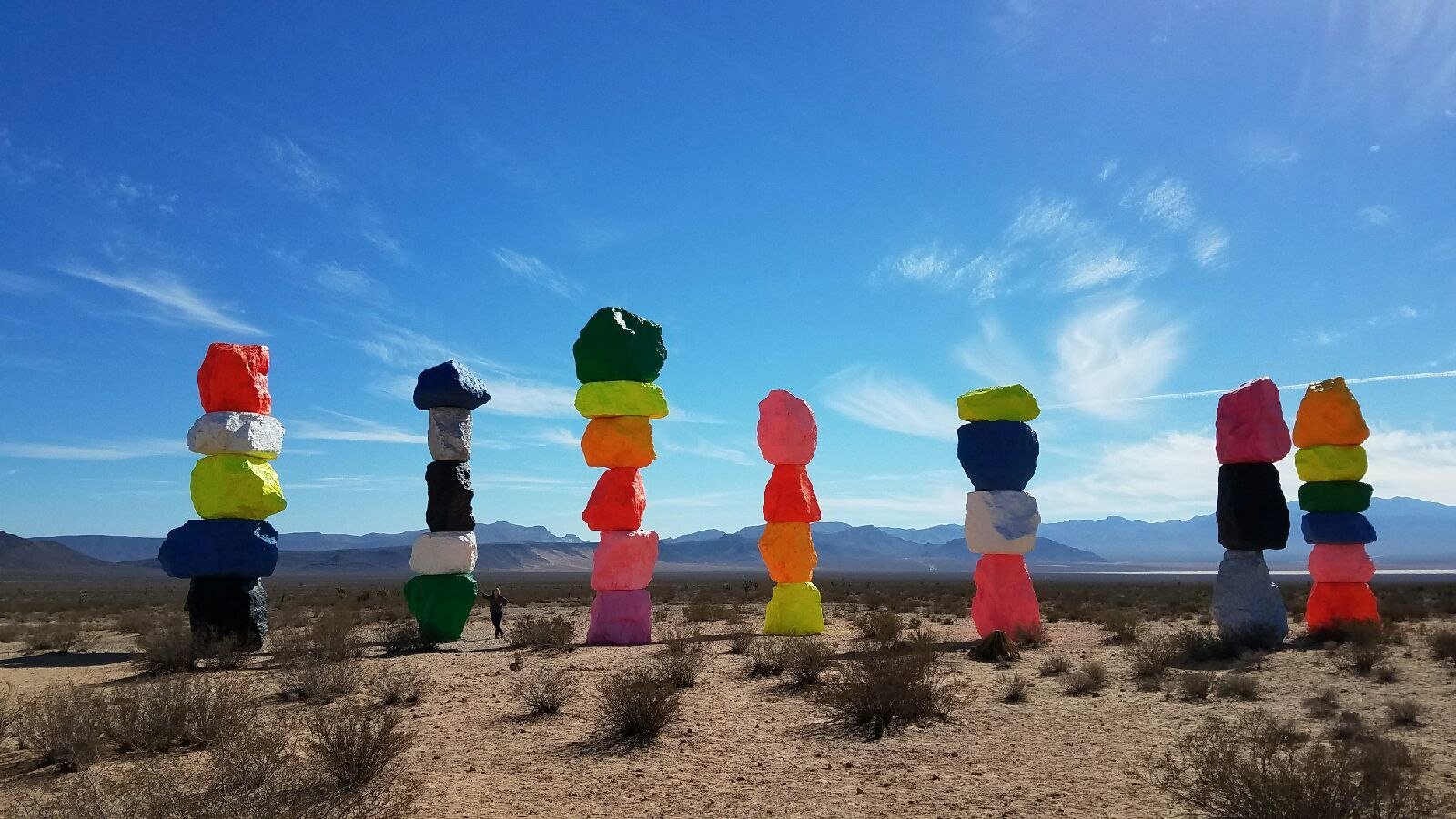 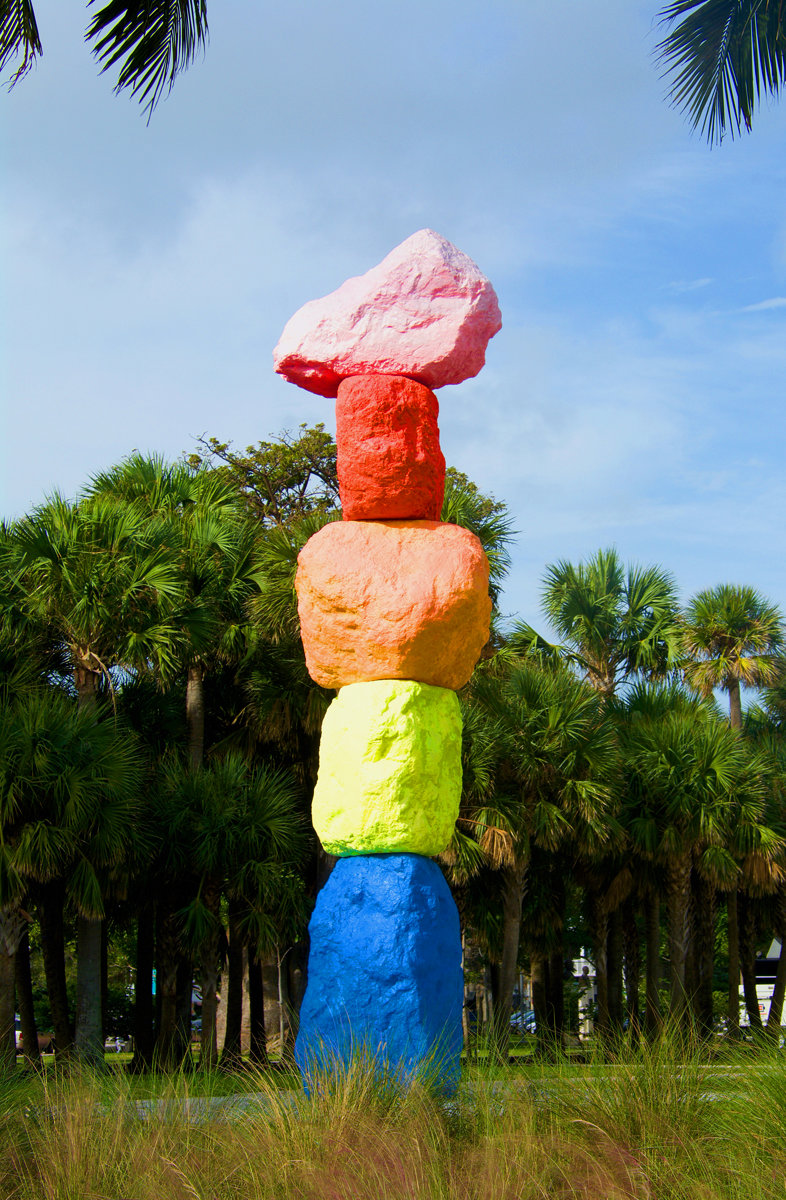 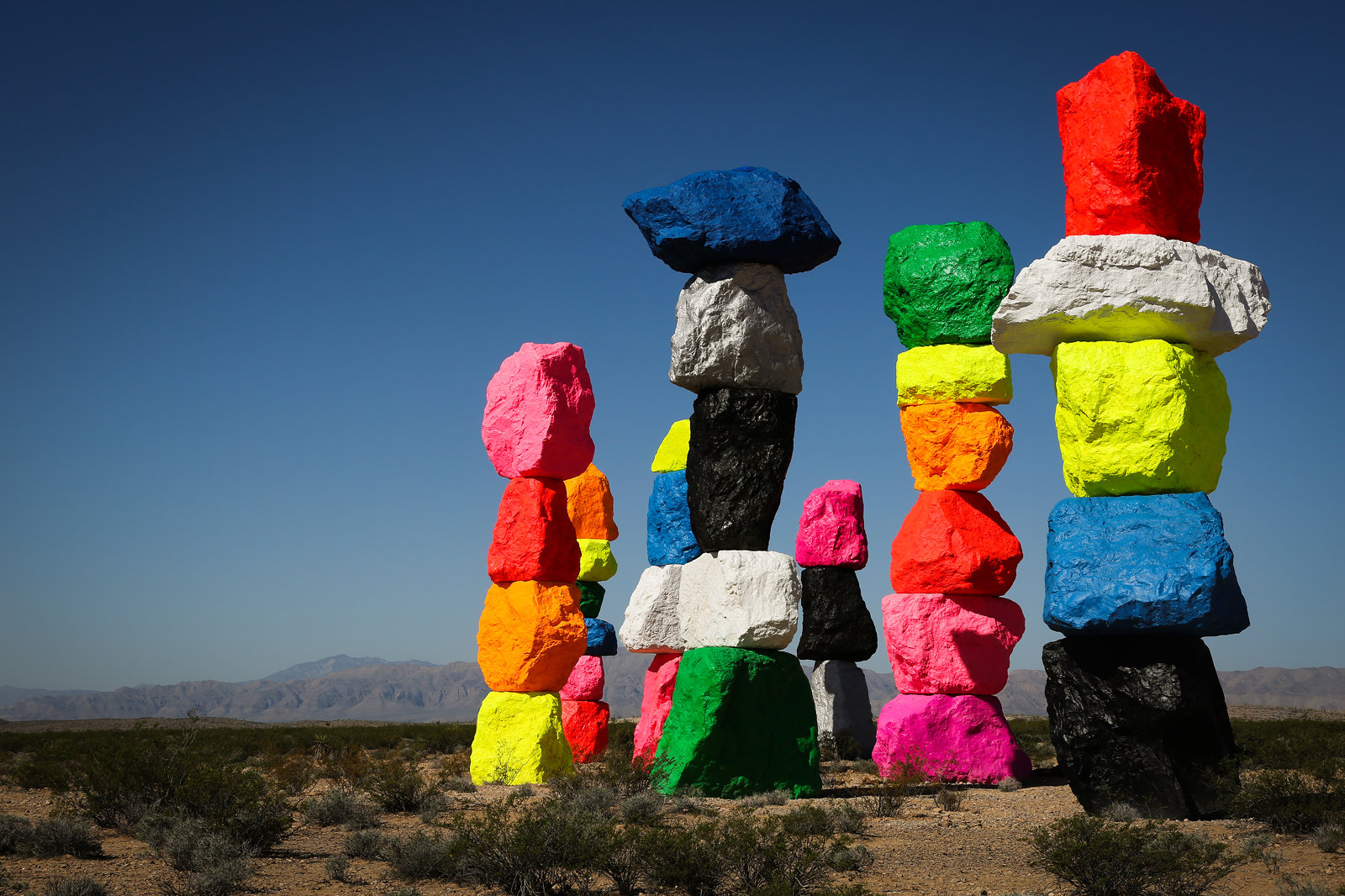 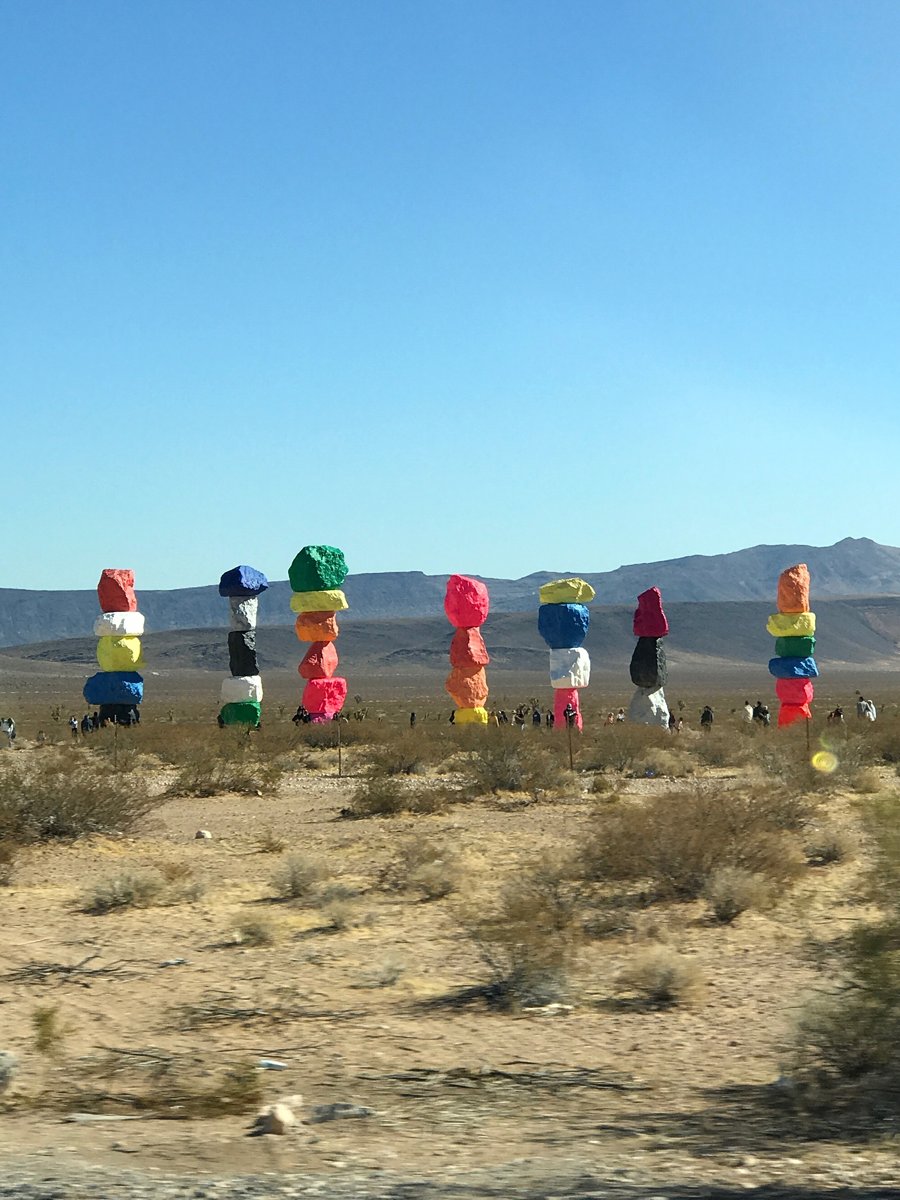 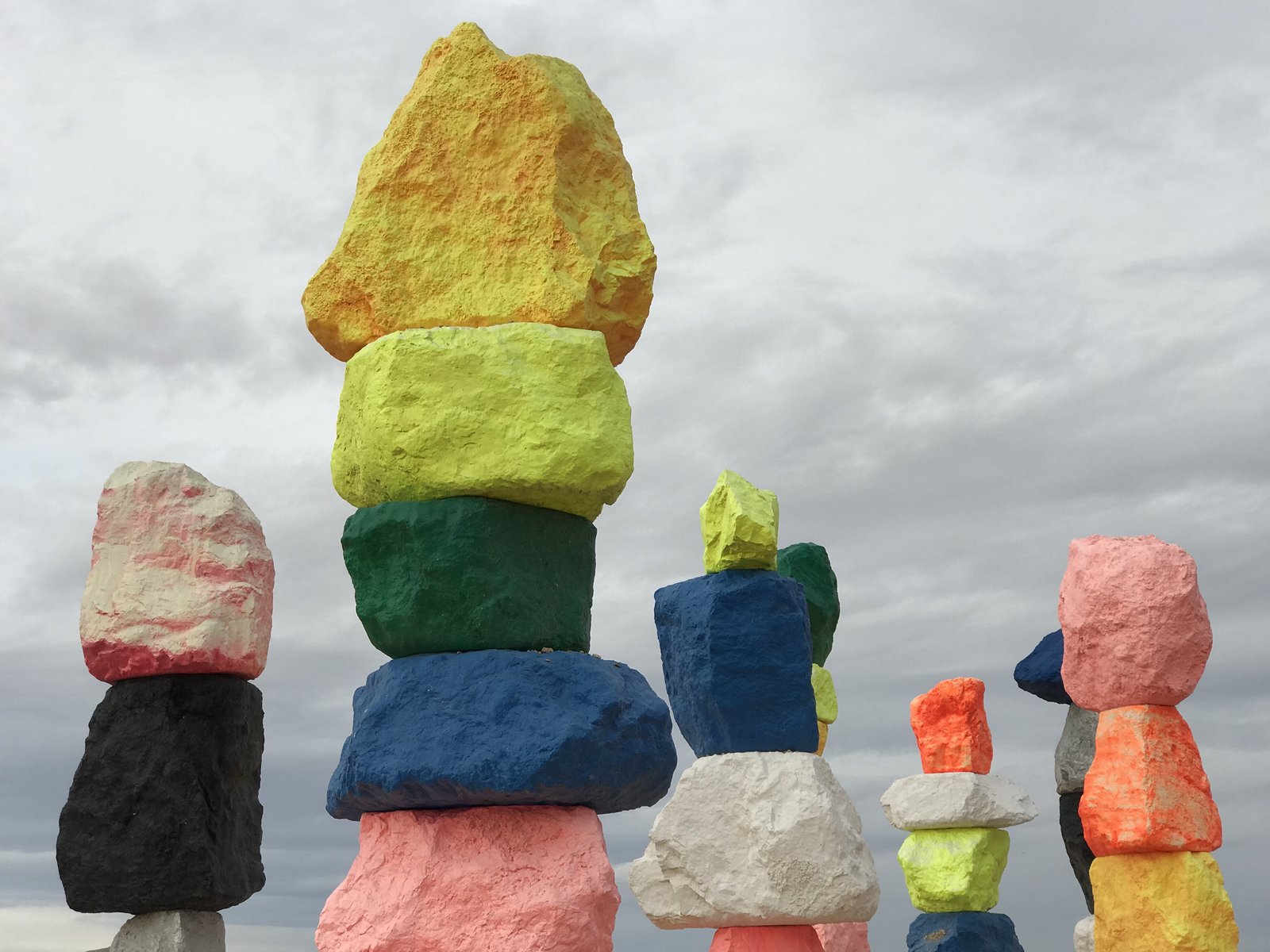 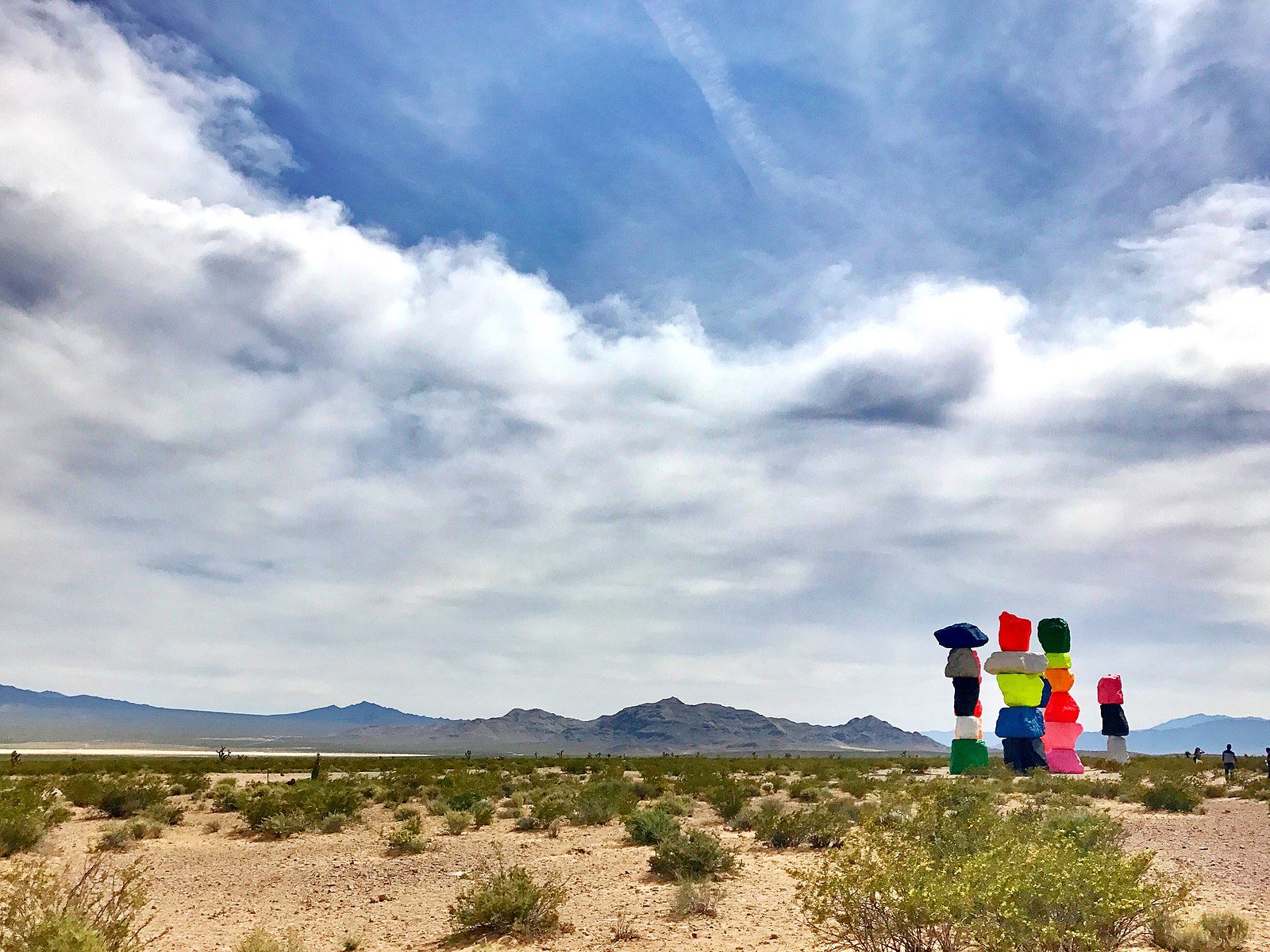 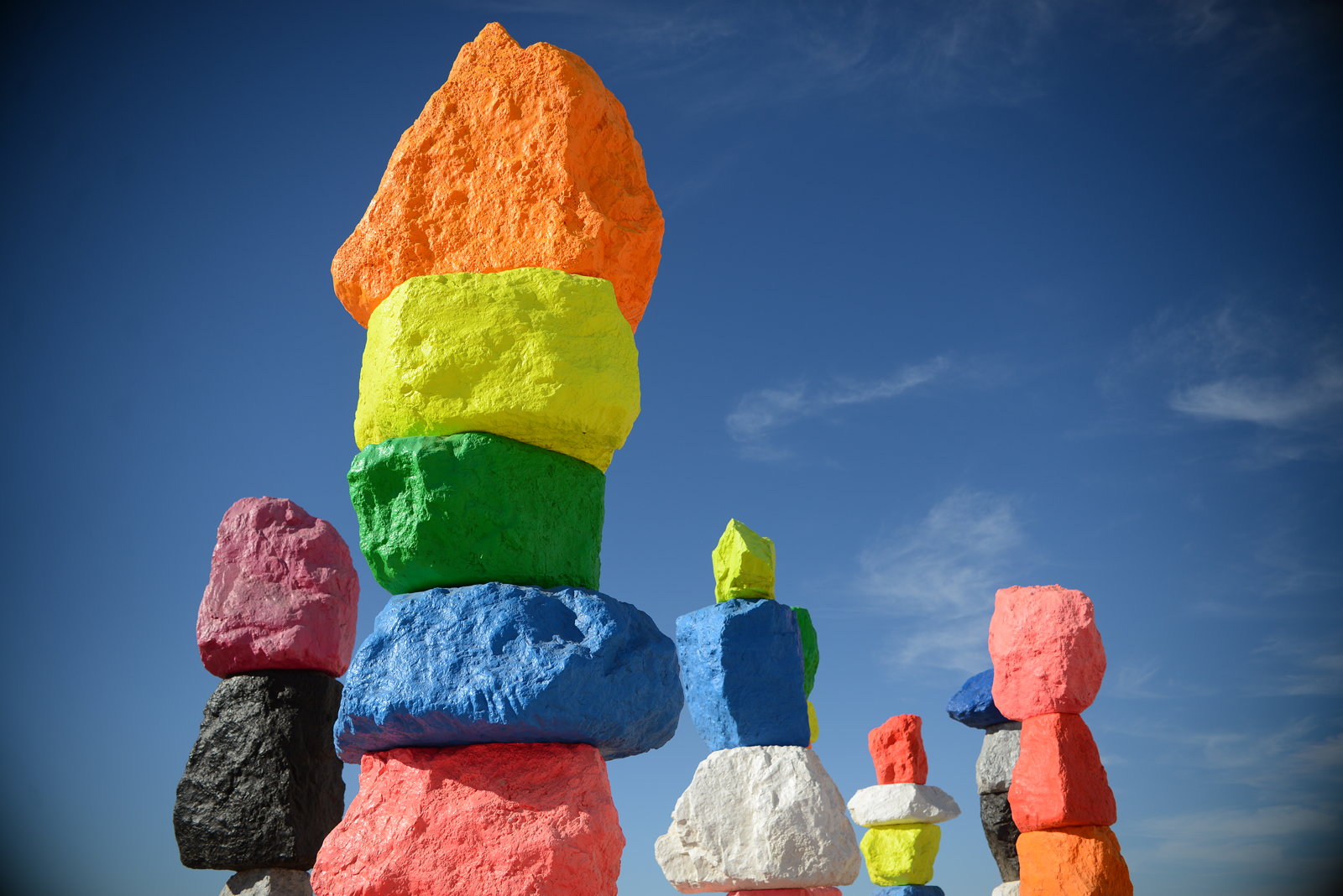 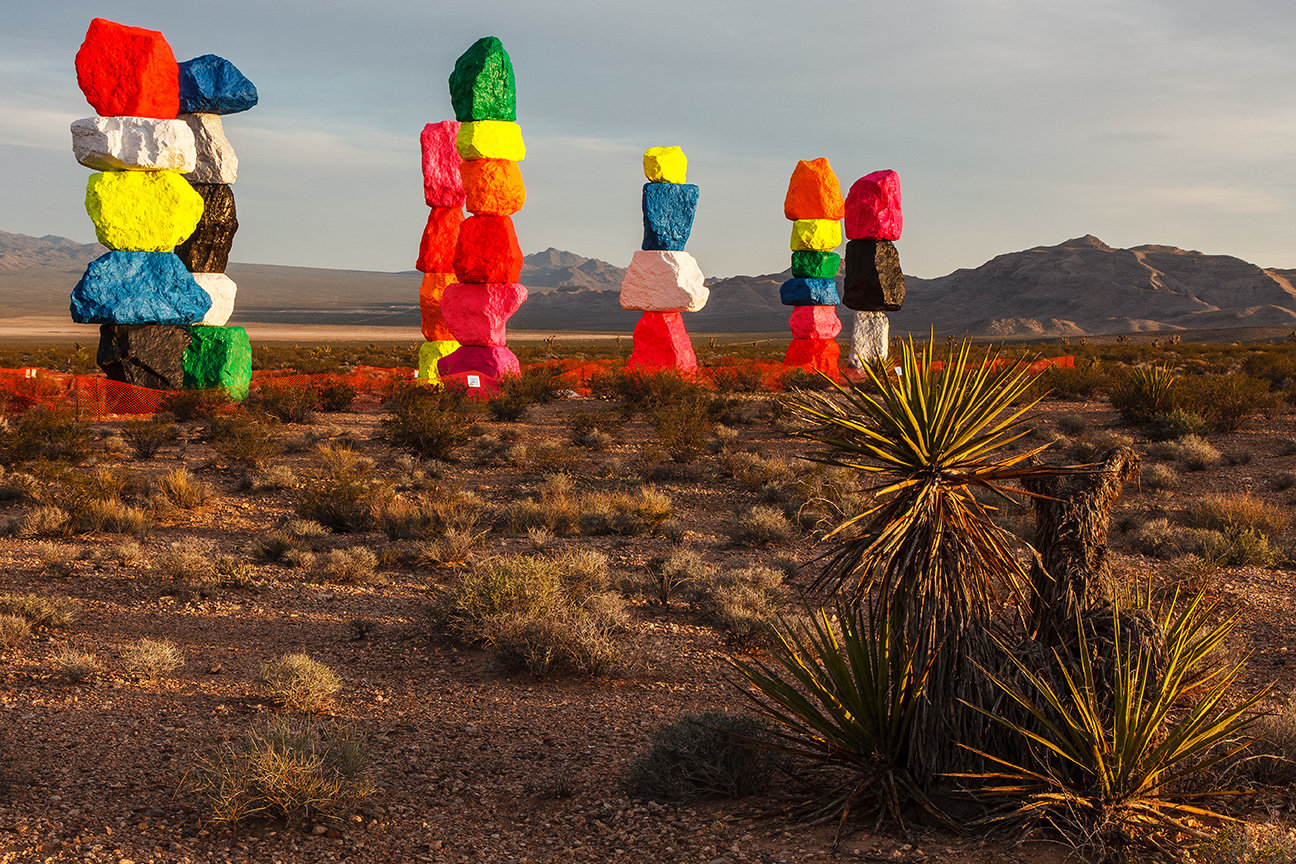 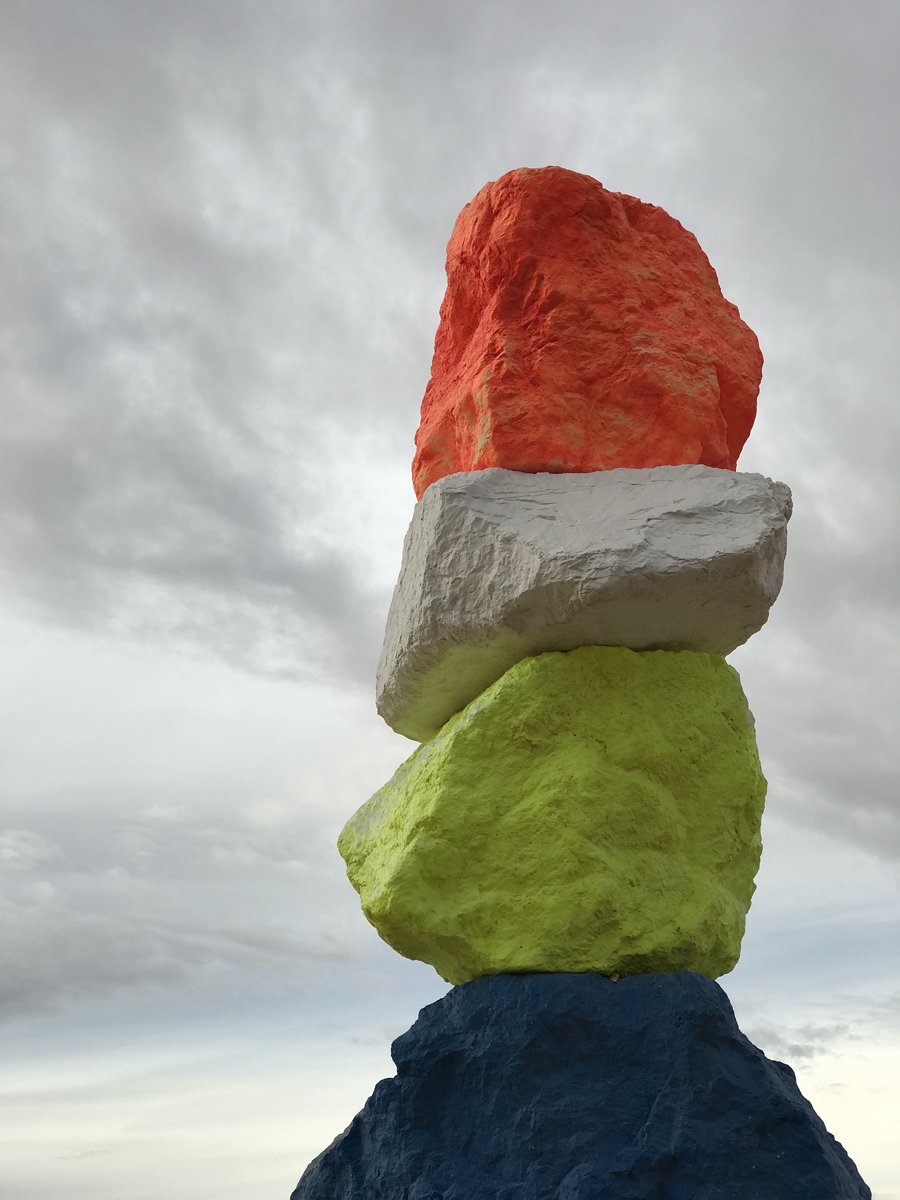 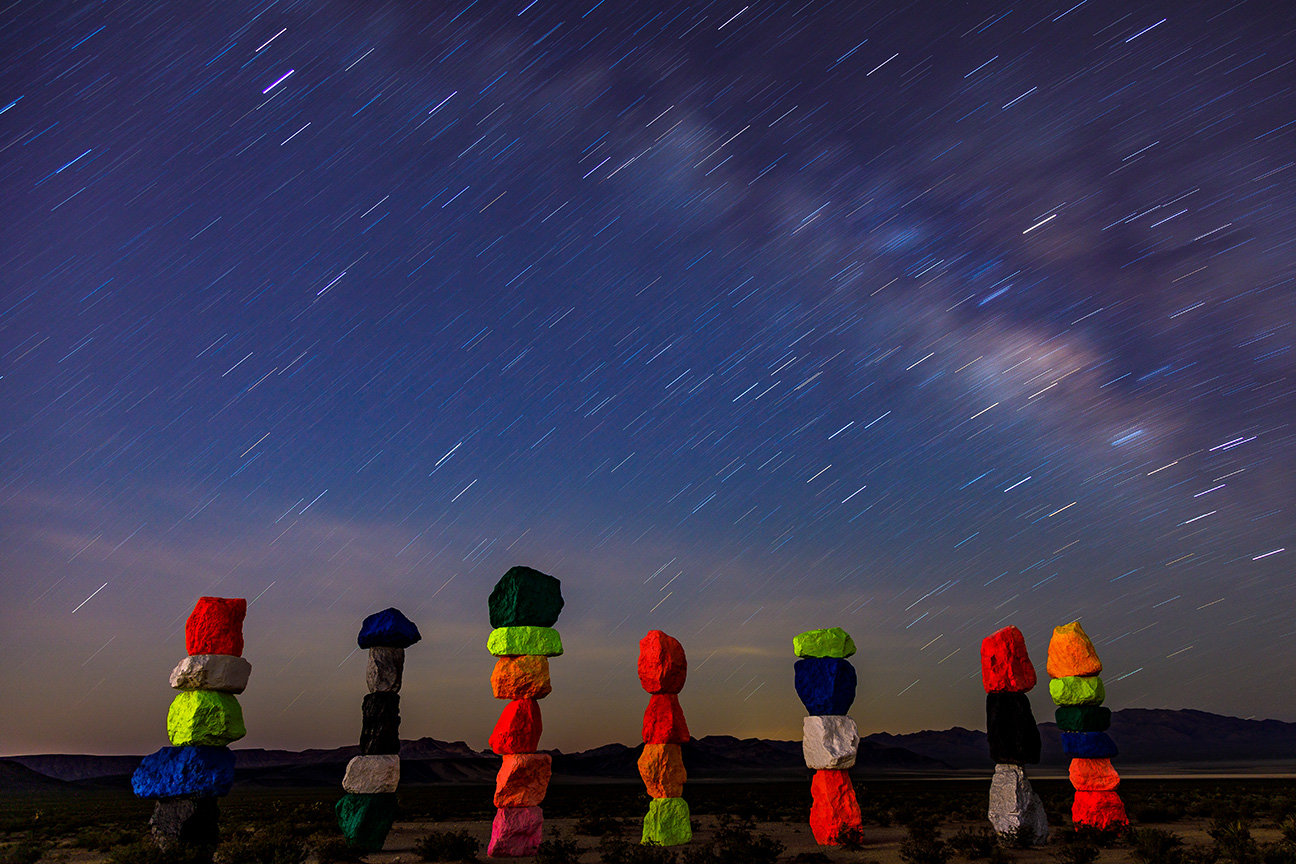 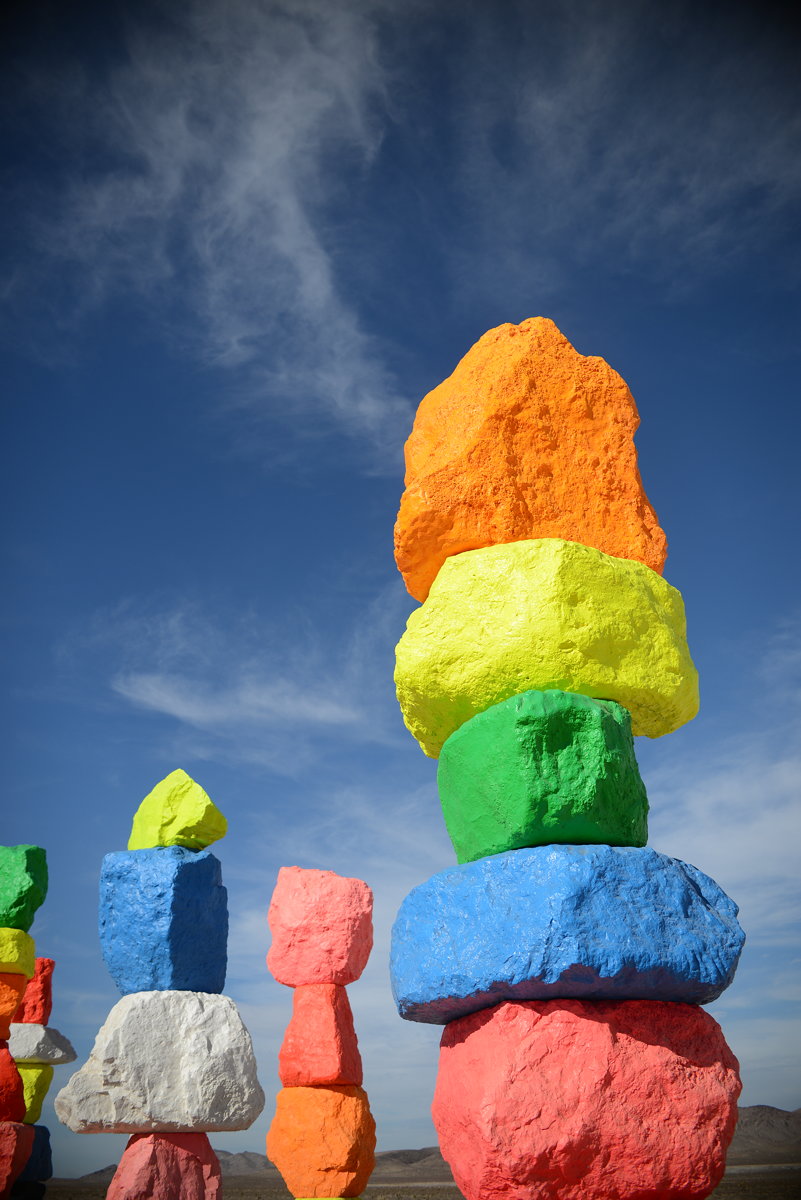 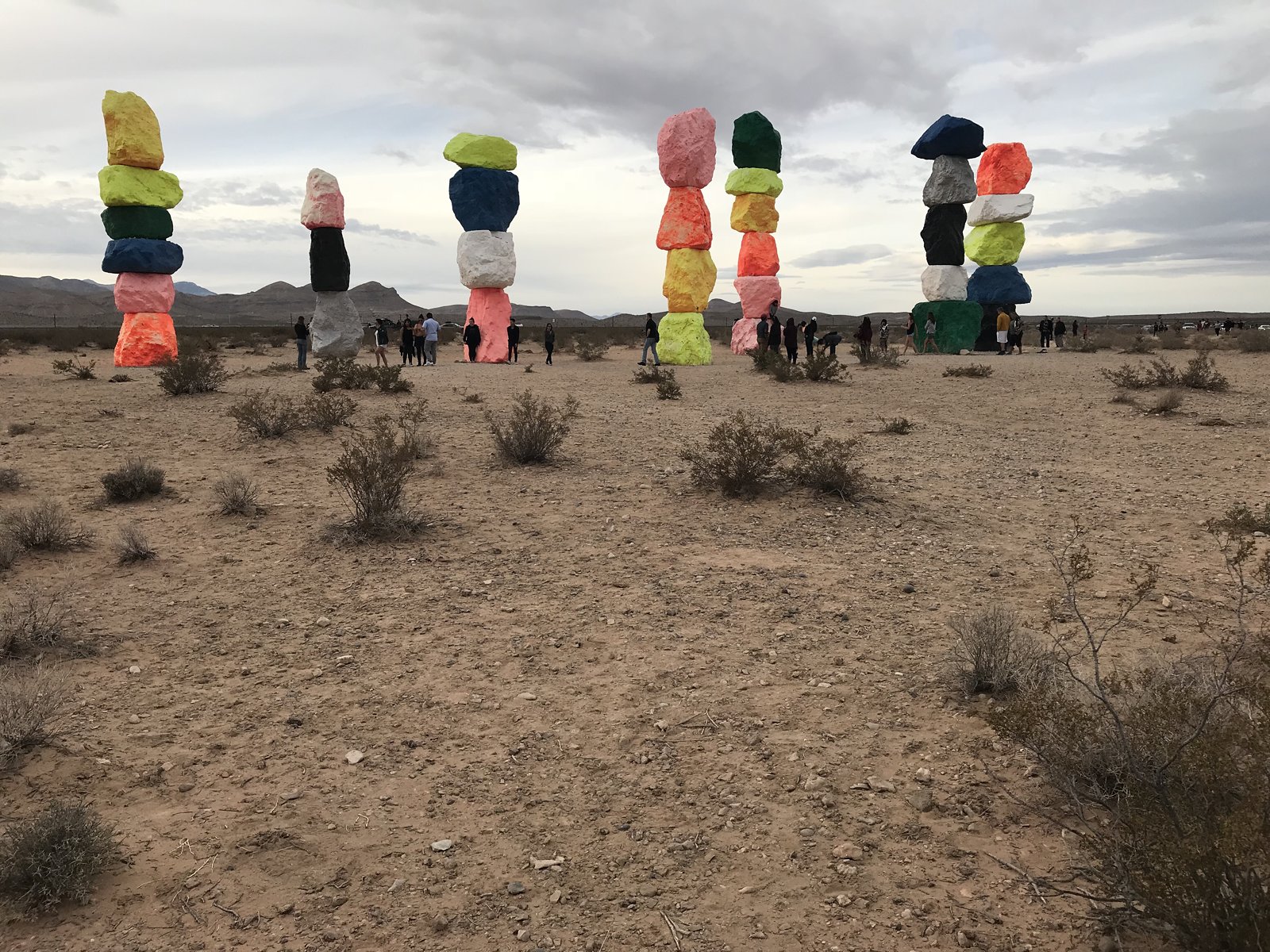 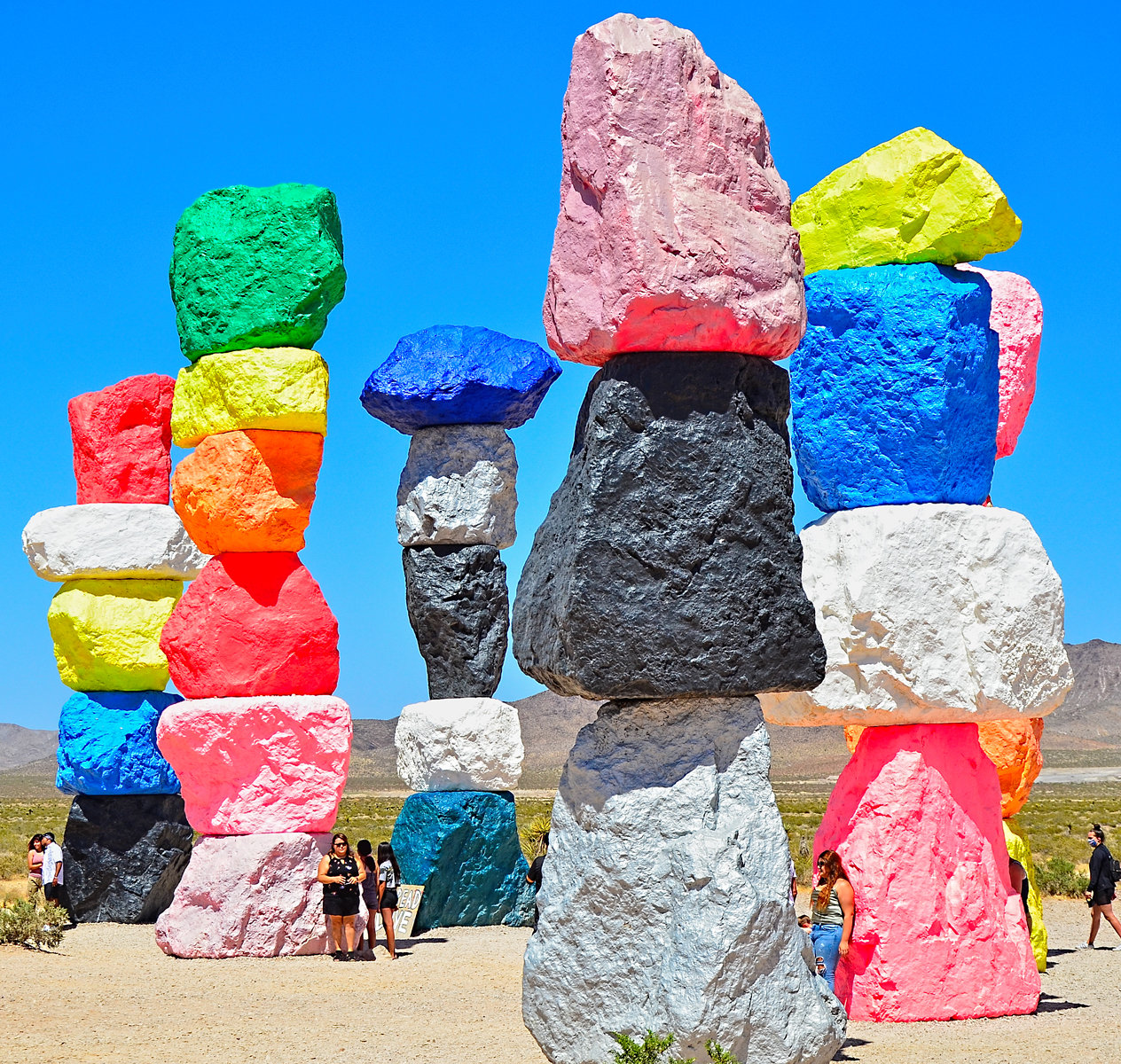 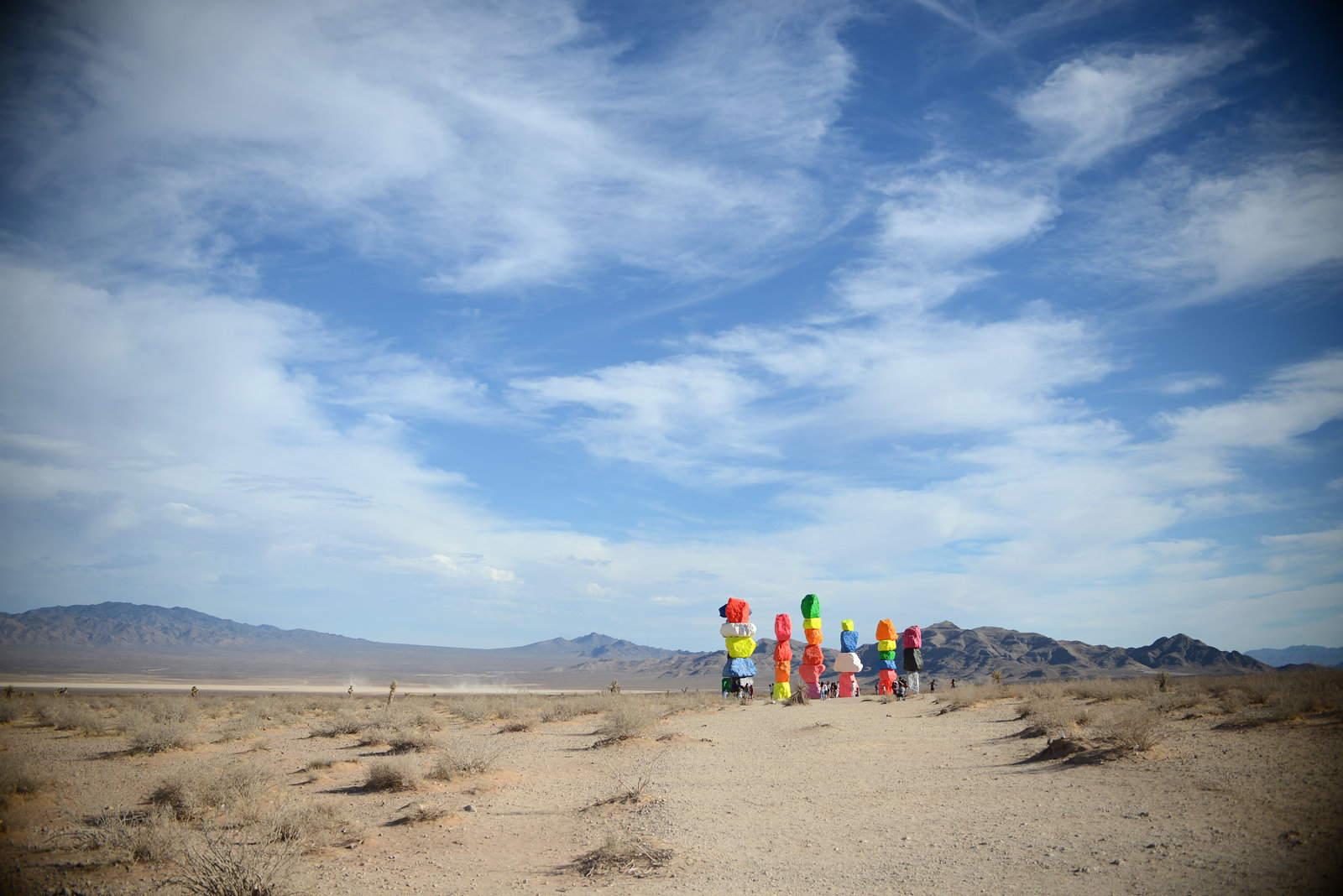 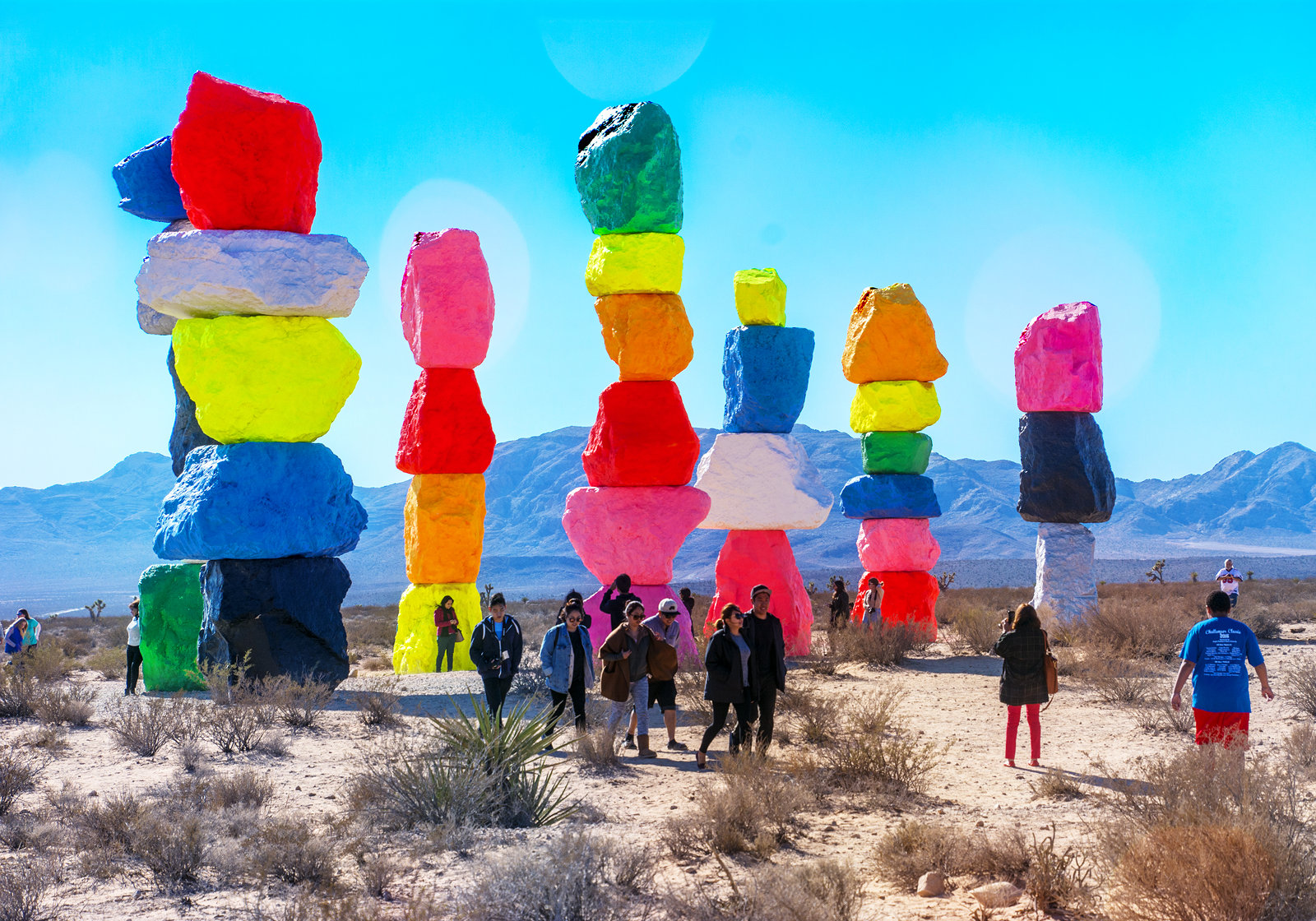 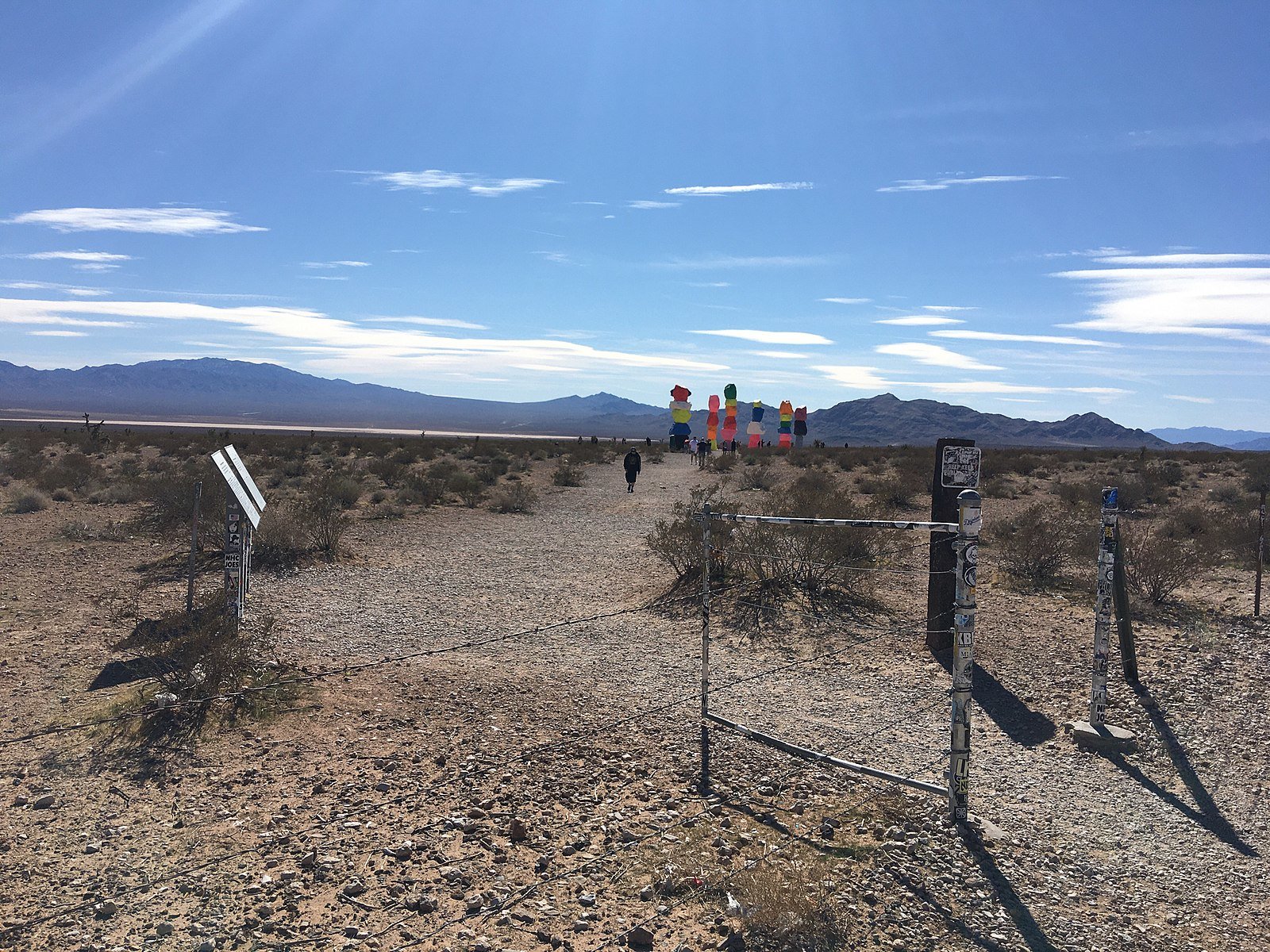 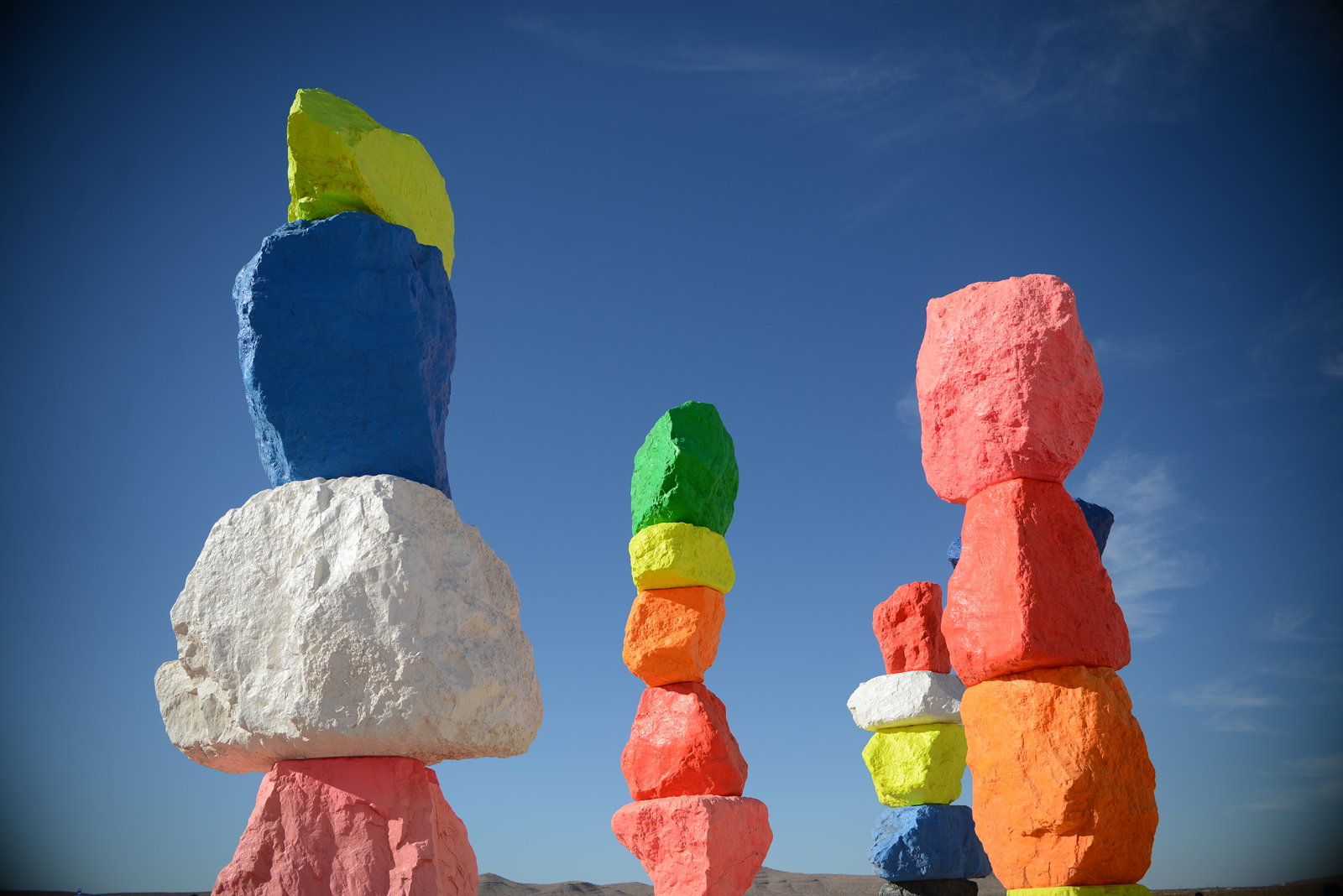 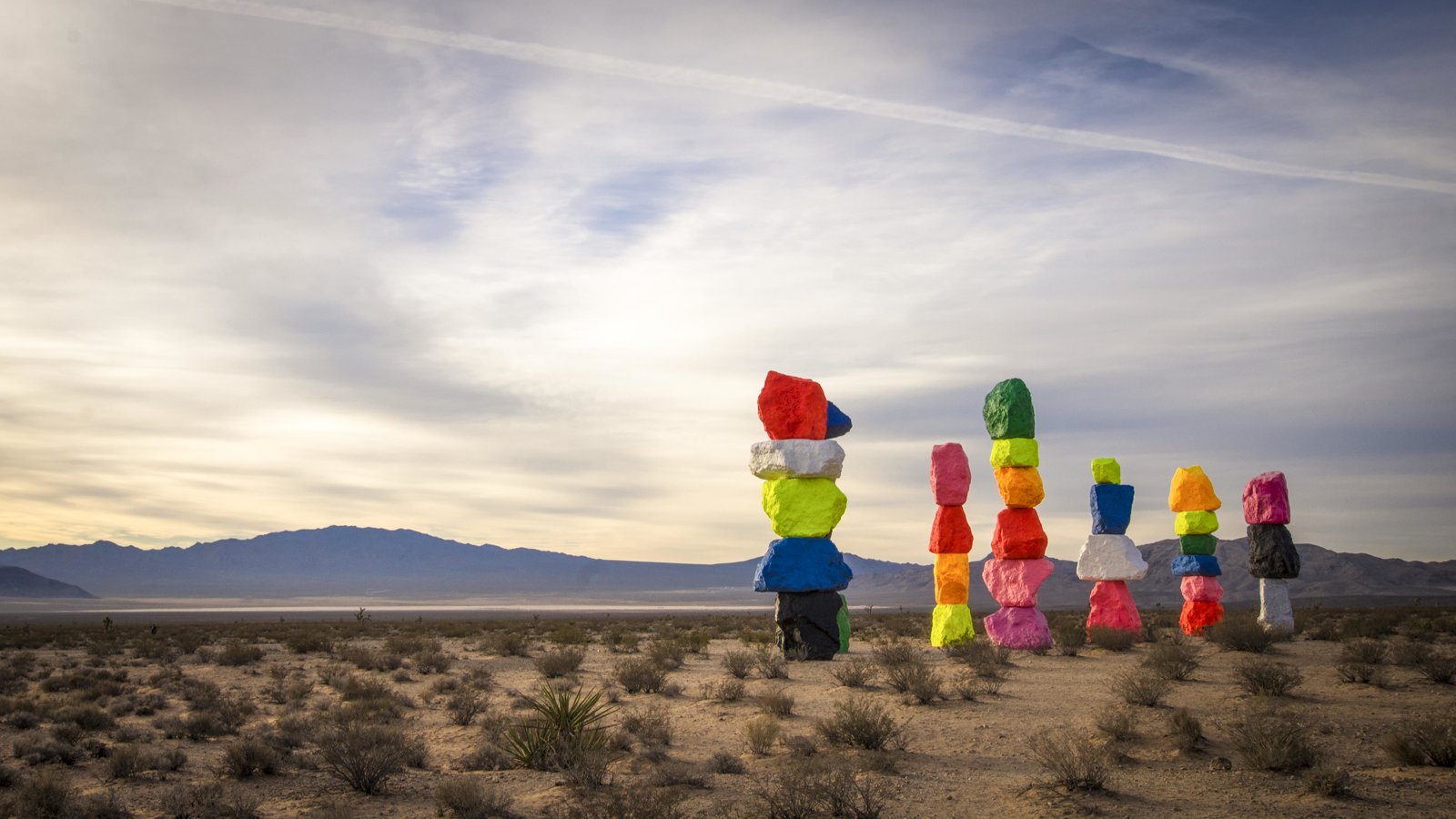 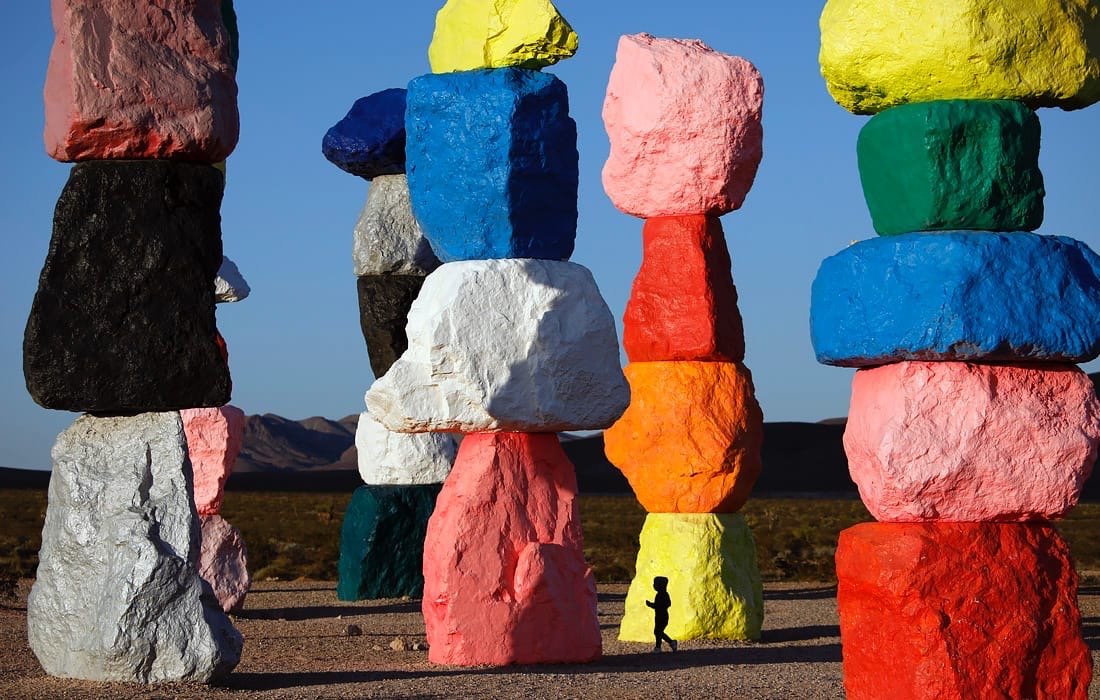 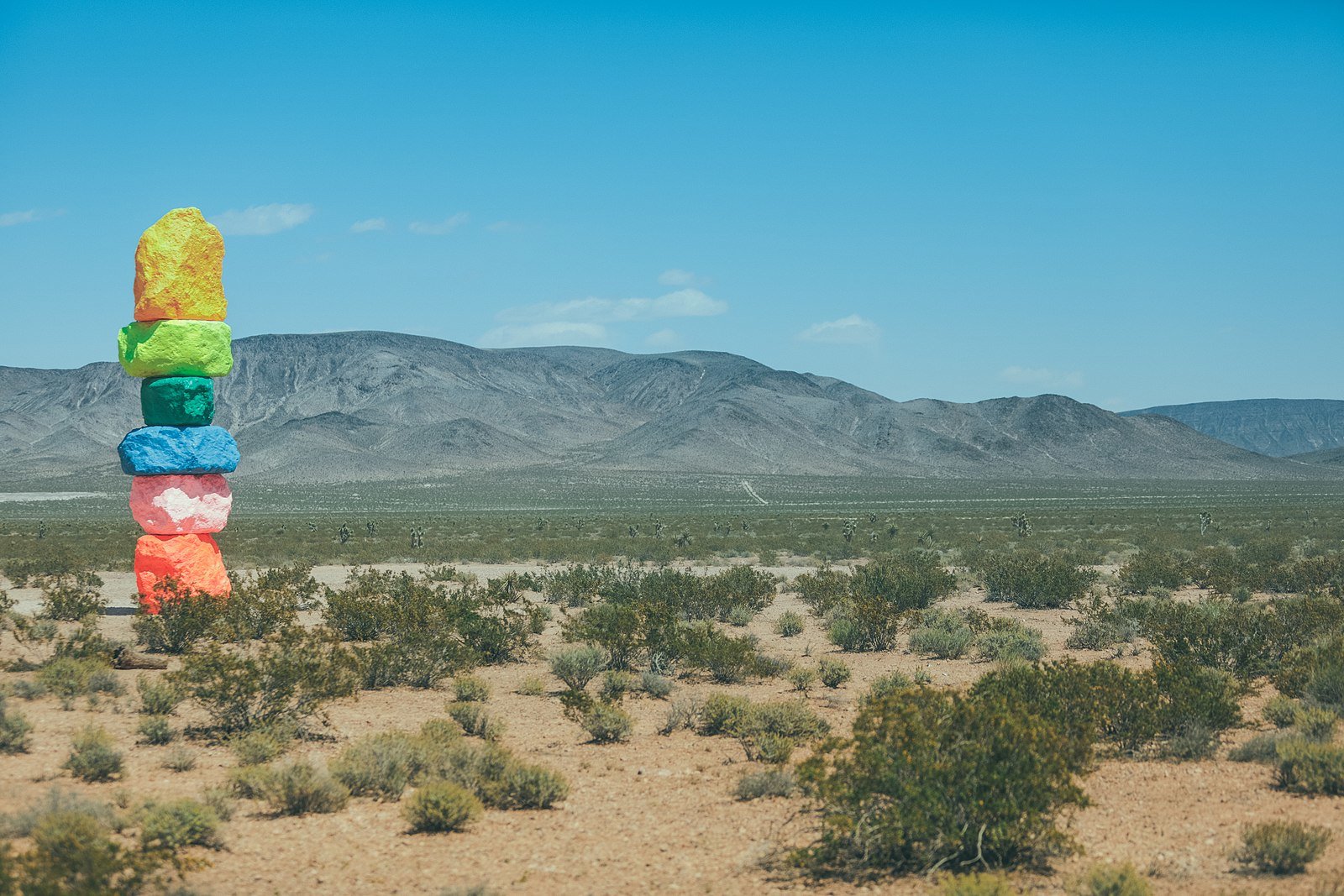 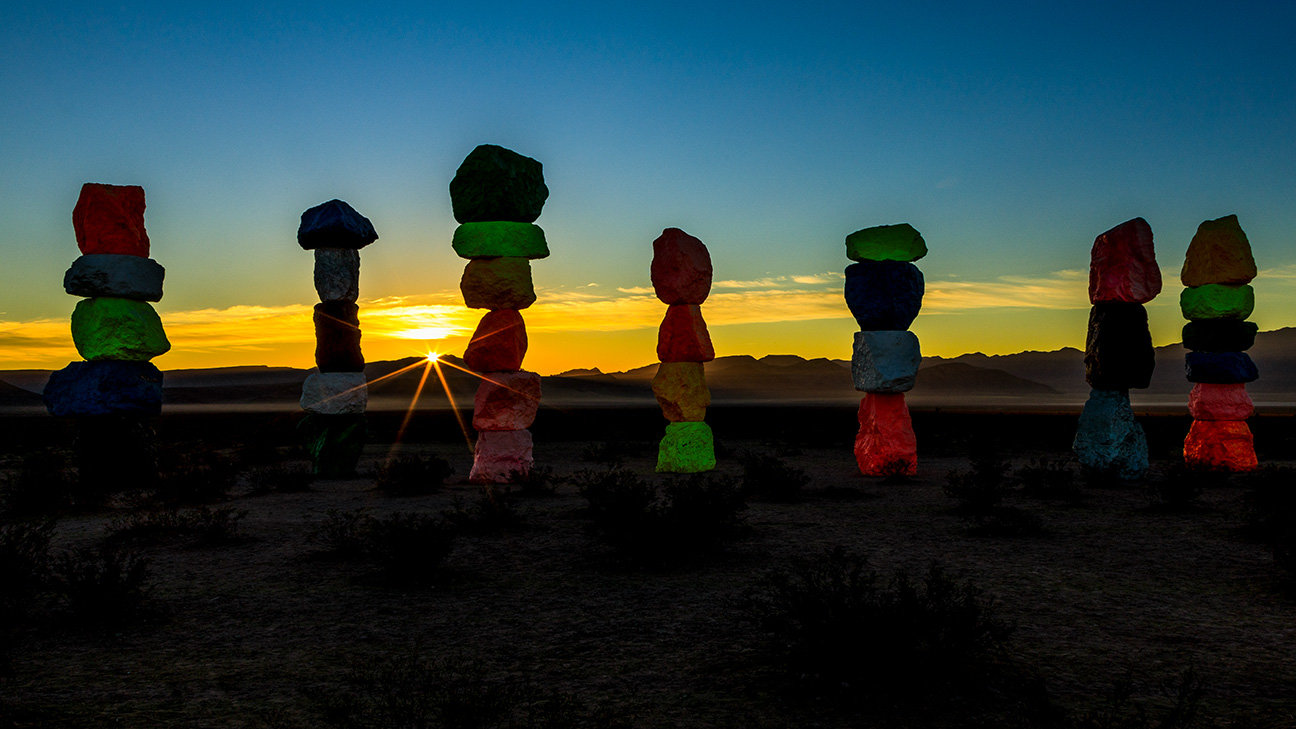