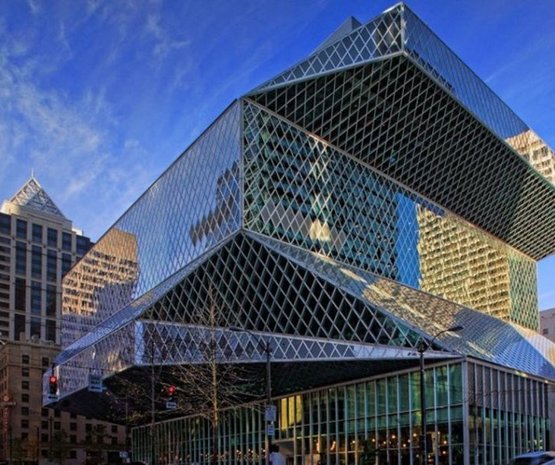 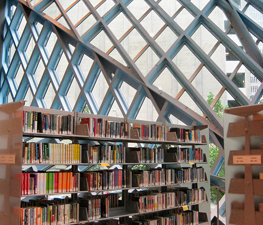 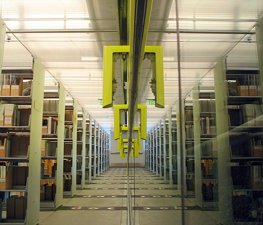 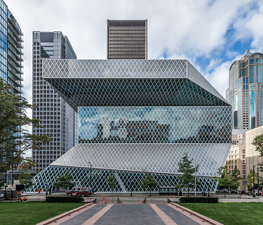 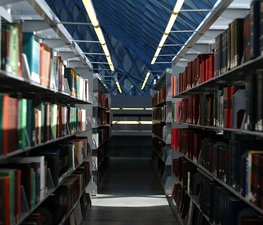 The Seattle Public Library's Central Library is the flagship library of The Seattle Public Library system. The 11-story (185 feet or 56.9 meters high) glass and steel building in downtown Seattle, Washington was opened to the public on Sunday, May 23, 2004. Rem Koolhaas and Joshua Prince-Ramus of OMA/LMN were the principal architects, Magnusson Klemencic Associates was the structural engineer with Arup; Arup also provided mechanical, electrical, and plumbing engineering, as well as, fire/life safety, security, IT and communications, and audio visual consulting; and Hoffman Construction Company of Portland, Oregon, was the general contractor. The 362,987 square feet (33,722.6 m2) public library can hold about 1.45 million books and other materials, features underground public parking for 143 vehicles, and includes over 400 computers open to the public. Over 2 million individuals visited the new library in its first year. It is the third Seattle Central Library building to be located on the same site at 1000 Fourth Avenue, the block bounded by Fourth and Fifth Avenues and Madison and Spring Streets. The library has a unique, striking appearance, consisting of several discrete "floating platforms" seemingly wrapped in a large steel net around glass skin. Architectural tours of the building began in June 2004.

In 2007, the building was voted #108 on the American Institute of Architects' list of Americans' 150 favorite structures in the US. It was one of two Seattle buildings included on the list of 150 structures, the other being T-Mobile Park.

There has been a library located in downtown Seattle as far back as 1891; however, the library did not have its own dedicated facilities and it was frequently on the move from building to building. The Seattle Carnegie Library, the first permanent library located in its own dedicated building at Fourth Avenue and Madison Street, opened in 1906 with a Beaux-Arts design by Peter J. Weber. Andrew Carnegie, whose patronage of libraries later included five others in Seattle, donated $200,000 for the construction of the new library. That library, at 55,000 square feet (5,100 m2), with an extension built in 1946, eventually became too small and cramped for a city population that, by the time the library was replaced, had roughly doubled since the library's first opening.

A second library, at five stories and 206,000 square feet (19,100 m2), was built at the site of the old Carnegie library in 1960. The new building designed by architects Bindon and Wright, with Decker, Christenson, and Kitchin as associates, featured an international-style architecture and an expanded interior, with features such as drive-thru service to offset the lack of available parking. George Tsutakawa's "Fountain of Wisdom" on the Fifth Avenue side (relocated to Fourth Avenue in the current library) was the first of that artist's many sculptural fountains. A remodeling finished in 1972 gave the public access to the fourth story, dedicated to the arts and sound recordings. By the late 1990s, the library became too cramped again and two-thirds of its materials were held in storage areas inaccessible to patrons. Renewed consciousness of regional earthquake dangers drew concern from public officials about the seismic risks inherent to the building's design.

The current Seattle Central Library is the third library building to inhabit the city block between Fourth and Fifth Avenues. Funding for the new Seattle Central Library building, as well as other construction projects throughout the library system, was provided by a $196.4 million bond measure, called "Libraries for All," approved by Seattle voters on November 3, 1998. The project also received a $20 million donation from Bill Gates, of Microsoft.

Rem Koolhaas and Joshua Prince-Ramus of the Dutch firm Office for Metropolitan Architecture (OMA), working in conjunction with the Seattle firm LMN Architects, served as the building's principal architects. Ramus served as the partner in charge. Bjarke Ingels designed the interior boxes for OMA. OMA was not one of the firms invited to compete for the project. Ramus, formerly a Seattle resident, found out from his mother one day in advance that the library board was inviting interested firms to attend a mandatory public meeting. He flew in, and OMA ended up winning the project. []

Deborah Jacobs, Chief Librarian in the Seattle Public Library system, spearheaded the project from the library's perspective and served as the primary client voice, while Betty Jane Narver served as president of the Library Board.

The architects conceived the new Central Library building as a celebration of books, deciding after some research that despite the arrival of the 21st century and the "digital age," people still respond to books printed on paper. The 11-story Central Library has a capacity for over 1.5 million books, in comparison to only 900,000 in the old library building. The architects also worked to make the library inviting to the public, rather than stuffy, which they discovered was the popular perception of libraries as a whole.

Although the library is an unusual shape from the outside, the architects' philosophy was to let the building's required functions dictate what it should look like, rather than imposing a structure and making the functions conform to that.

For example, a major section of the building is the "Books Spiral," (designed to display the library's nonfiction collection without breaking up the Dewey Decimal System classification onto different floors or sections). The collection spirals up through four stories on a continuous series of shelves. This allows patrons to peruse the entire collection without using stairs or traveling to a different part of the building.

Other internal features include; the Microsoft Auditorium on the ground floor, the "Living Room" on the third floor (designed as a space for patrons to read), the Charles Simonyi Mixing Chamber (a version of a reference desk that provides interdisciplinary staff help for patrons who want to have questions answered or do research), and the Betty Jane Narver Reading Room on level 10 (with views of Elliott Bay).

New functions include automatic book sorting and conveyance, self-checkout for patrons, pervasive wireless communications among the library staff, and over 400 public computer terminals.

Use of the building is more than double the predicted volume. In the library's first year, 2.3 million people came to visit the library; roughly 30% were from outside Seattle. The library generated $16 million in new economic activity for its surrounding area in its first year. The opinion of architectural critics and the general public has been mixed. Paul Goldberger, writing in The New Yorker, declared the Seattle Central Library "the most important new library to be built in a generation, and the most exhilarating." The American Council of Engineering Companies (ACEC) of Washington awarded the Library its Platinum Award for innovation and engineering in its "structural solutions". The library also received a 2005 national AIA Honor Award for Architecture.

Lawrence Cheek, the architecture critic for the Seattle Post-Intelligencer, revisited the building in 2007 and found it "confusing, impersonal, uncomfortable, oppressive" on the whole, with various features "decidedly unpleasant," "relentlessly monotonous," "badly designed and cheesily detailed," "profoundly dreary and depressing," and "cheaply finished or dysfunctional," concluding that his earlier praise for the building was a "mistake."

The library was roundly condemned by the Project for Public Spaces, which noted "if the library were a true 'community hub,' its most active areas would connect directly to the street, spinning off activity in every direction. That is where Koolhaas's library, sealed away from the sidewalks and streets around it, fails completely." It went on to note "critics have cast it as a masterpiece of public space design. As if blinded by the architect's knack for flash and publicity, they cannot locate, or perhaps refuse to acknowledge, the faults in his creation."

Matt Lew
Go all the way to the 10th floor to view from the top. Also take the 8th floor and walk down the spiral.

Kristine Gelsano
Cool! I've never seen a Public Library like this. I enjoyed the modern architecture & interior design. I like how the floors spirals up. There's also a cafe in where you can get coffee/drinks & food.

Johnny Peace
Always a great spot to chill for a couple hours. I usually go to the tenth floor to study, or binge watch tv shows. Then when you're tired of screens, take the stairs and check oit the unique floors.

Erkan Saka
This is the biggest public library I have ever seen. 13-floor modern well-designed architecture. The tenth floor has a viewing deck, too. Do not expect a majestic city view though.

Catalina Otero
There's a whole section up on the top floor dedicated to Seattle history. Looking at some old yearbooks from the previous century was really interesting!

eric bornemann
Fantastically cool building that is a ton of fun to explore. Be sure to go all the way to the top.
Load more comments
foursquare.com
9.0/10
85,808 people have been here
I've been here
Add to wishlist

Benaroya Hall is the home of the Seattle Symphony in Downtown Seattle,

Hammering Man is a series of monumental kinetic sculptures designed by

The Seattle Underground is a network of underground passageways and

Smith Tower is a skyscraper in Pioneer Square in Seattle, Washington.

The Market Theater Gum Wall is a local landmark in downtown Seattle,

The National Diet Building (国会議事堂, Kokkai-gijidō) is the building w 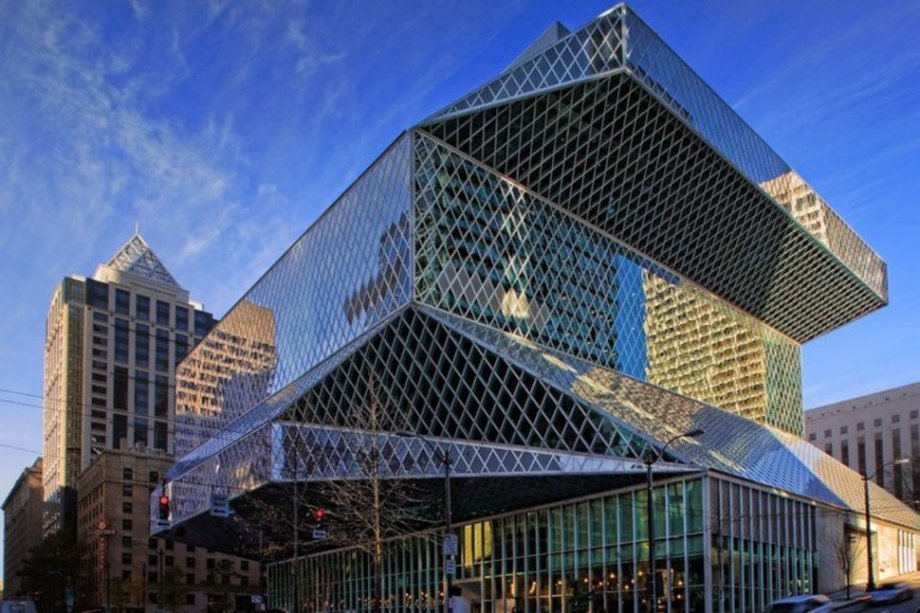 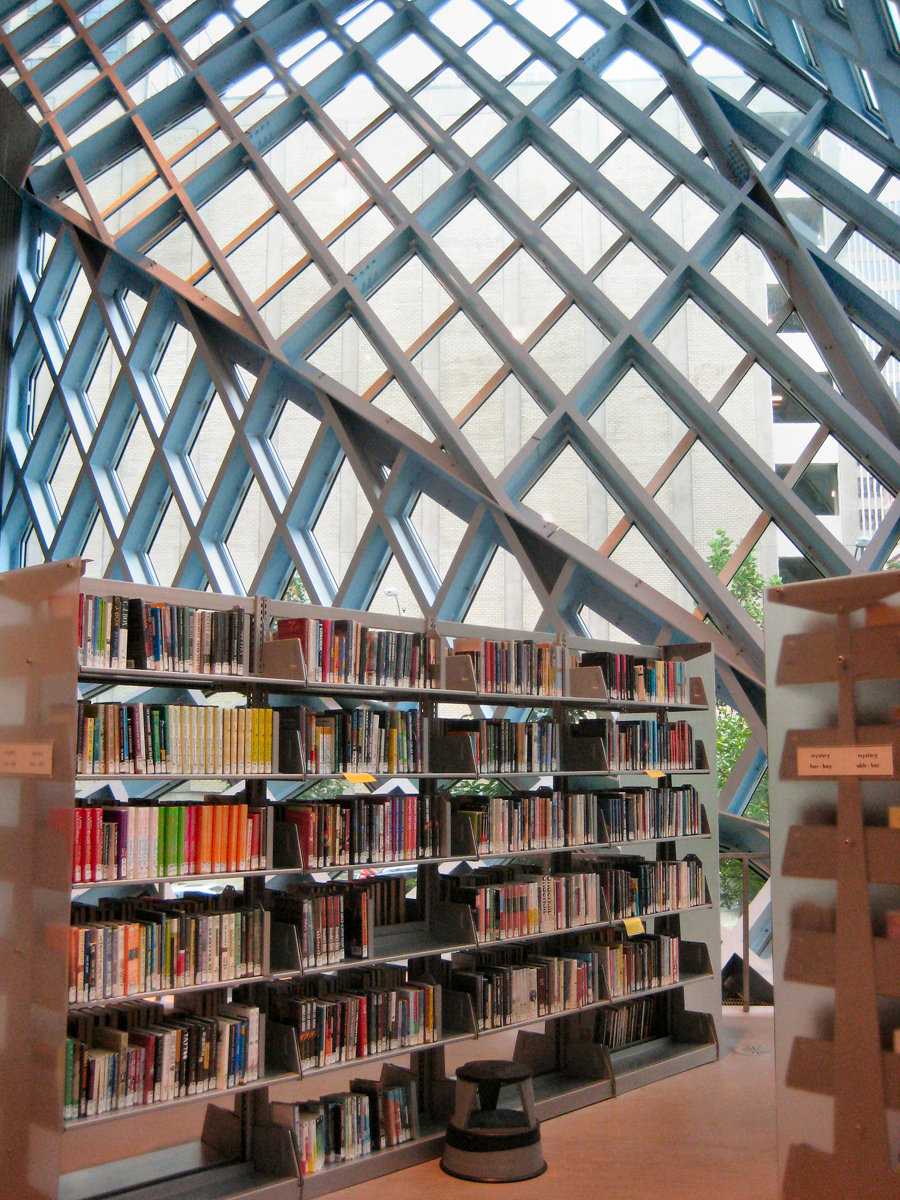 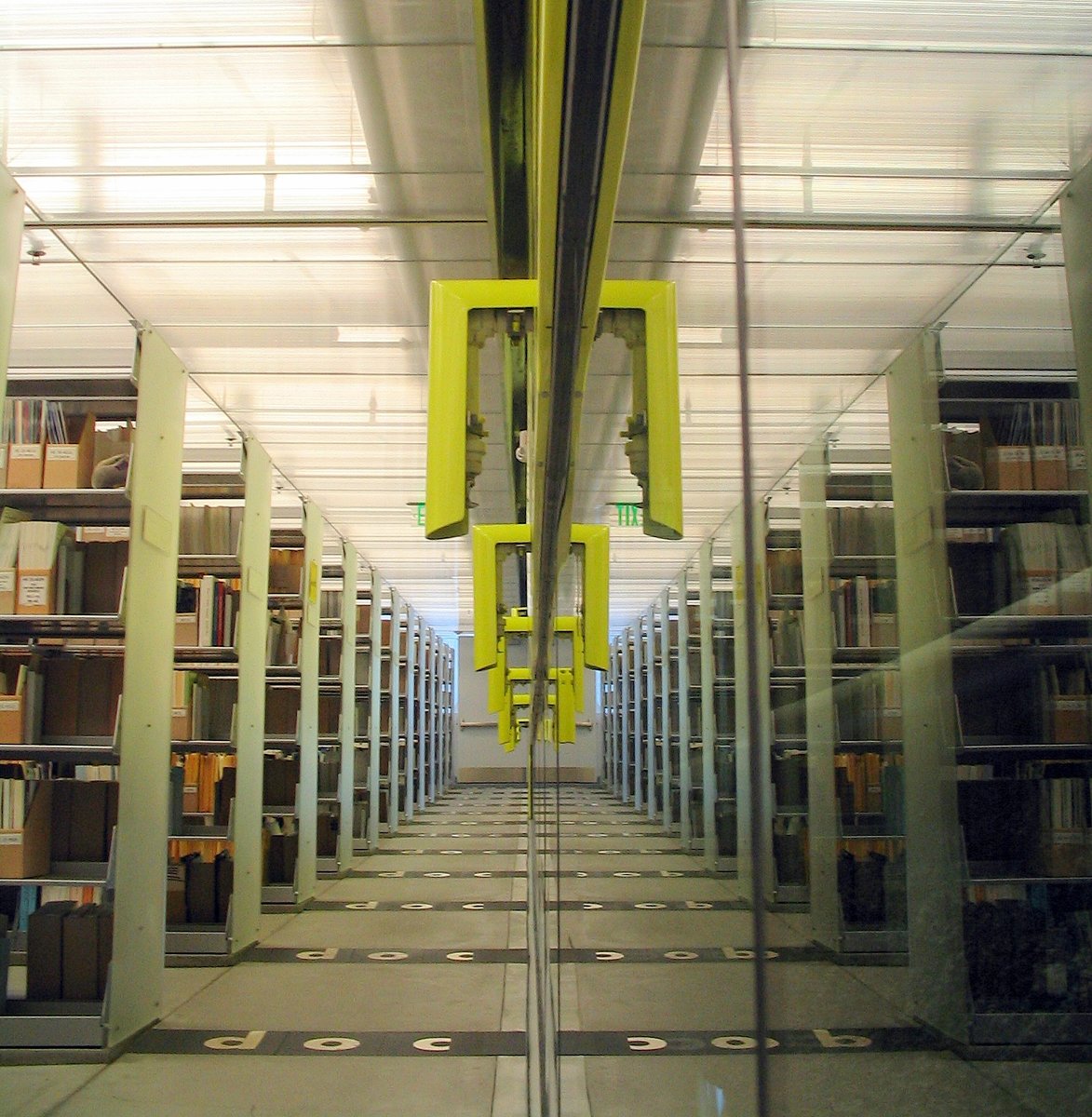 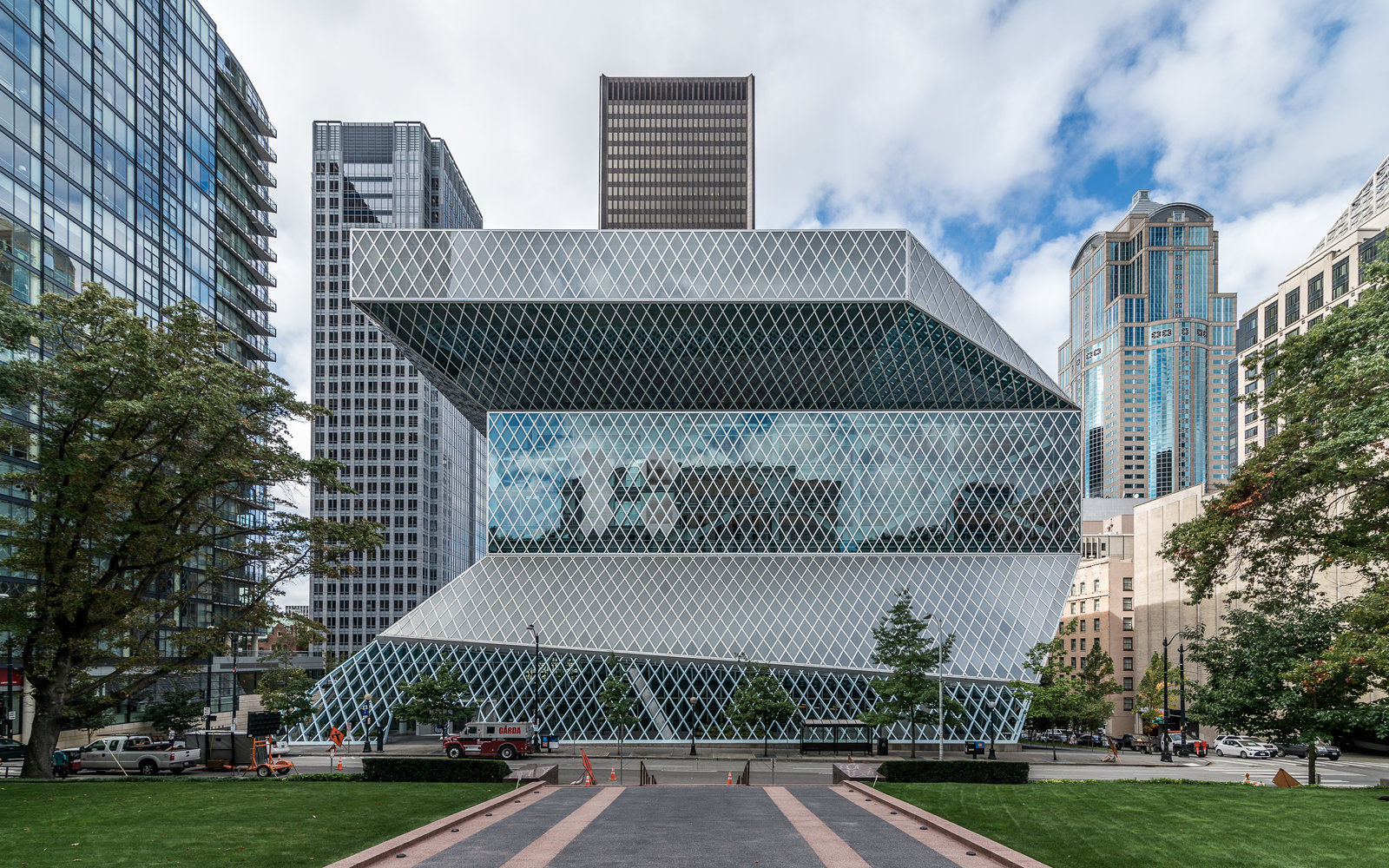 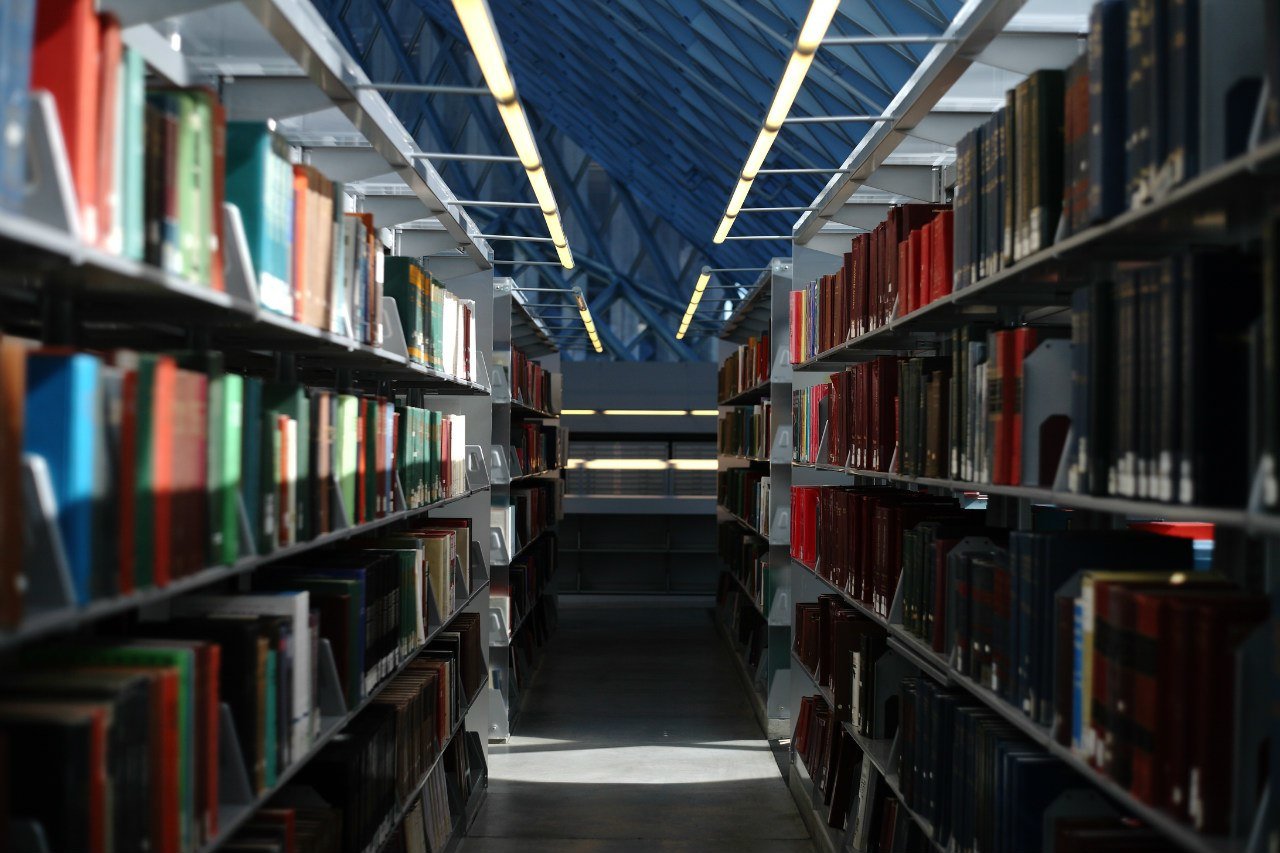 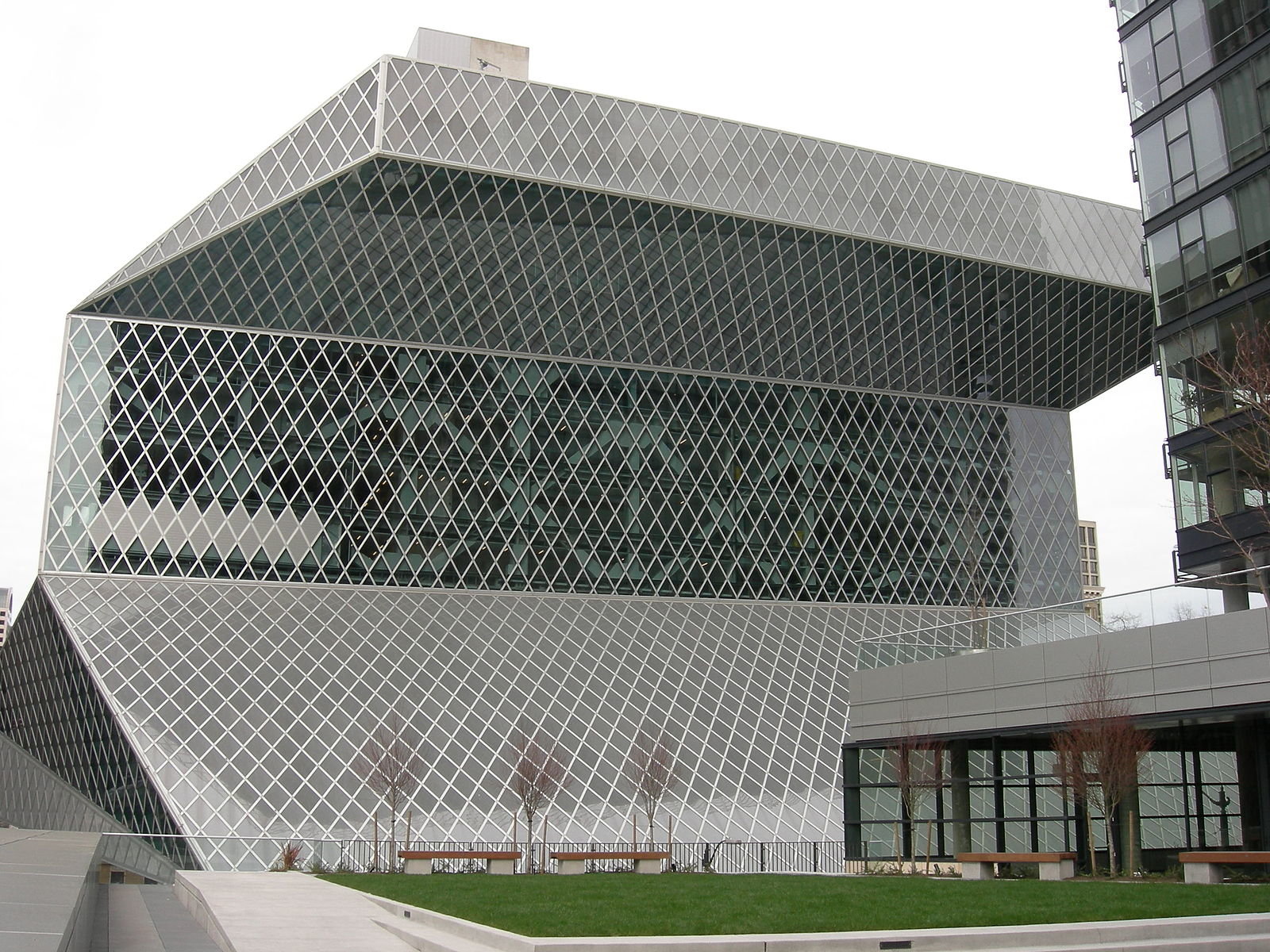 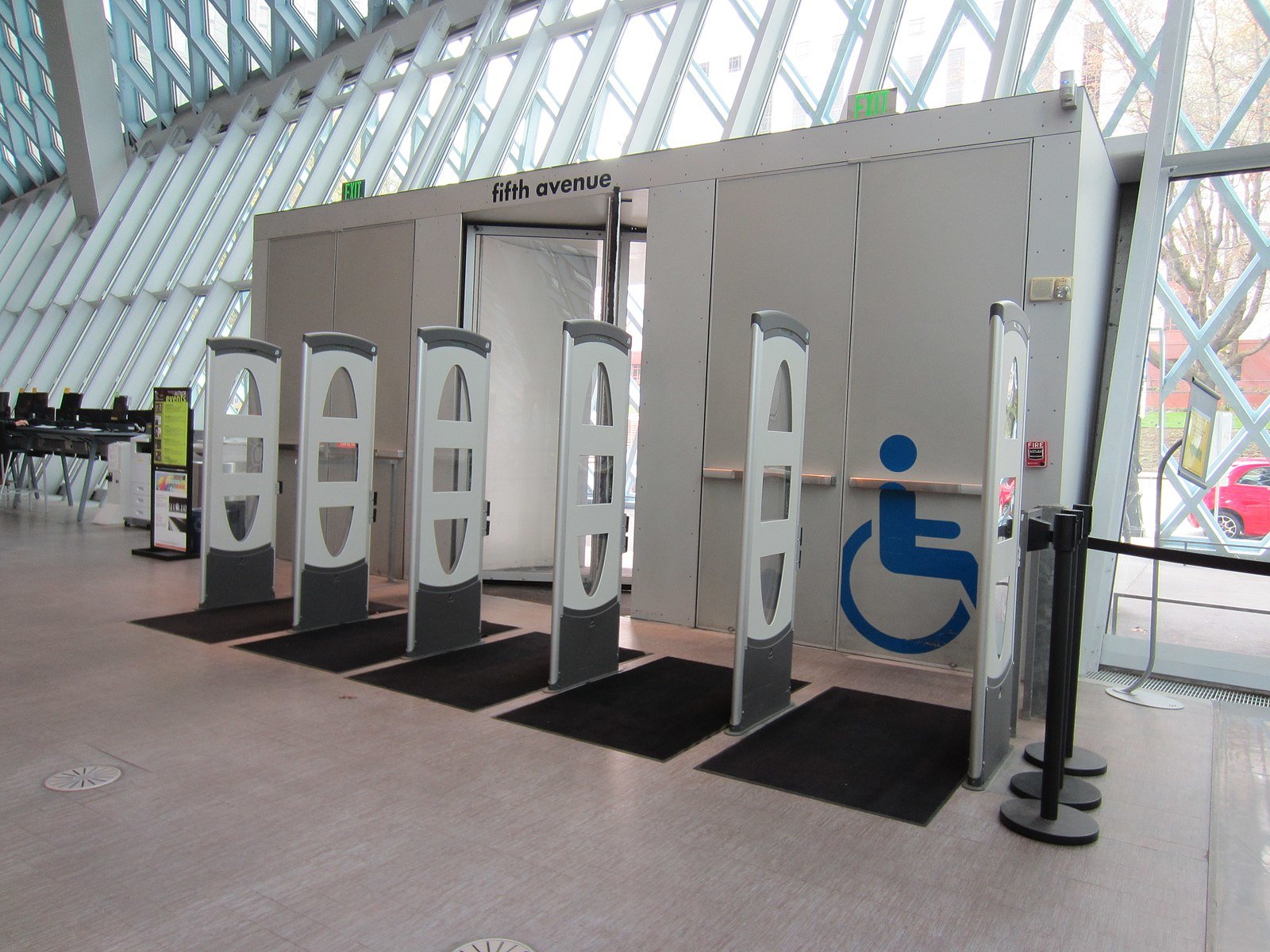 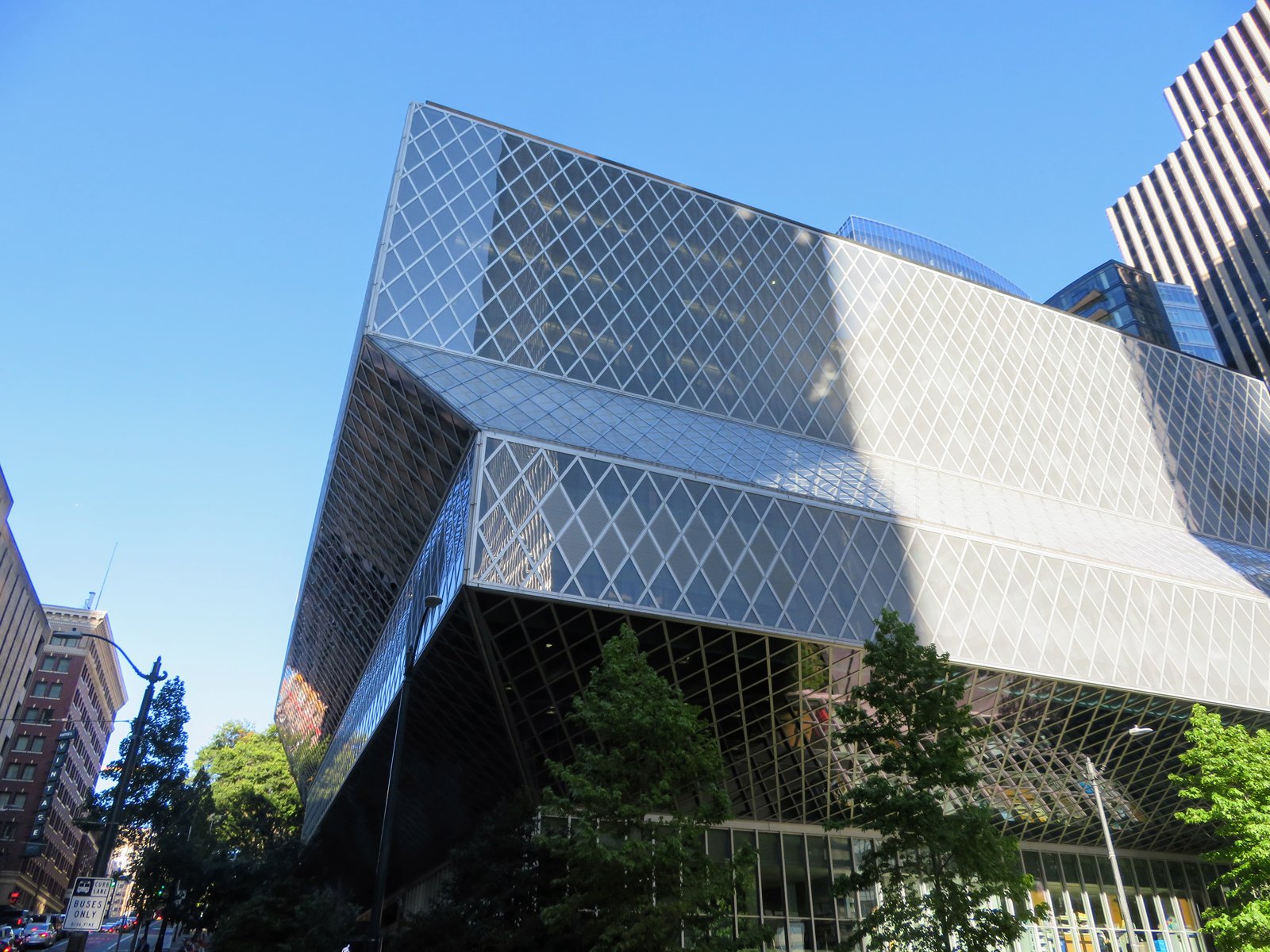 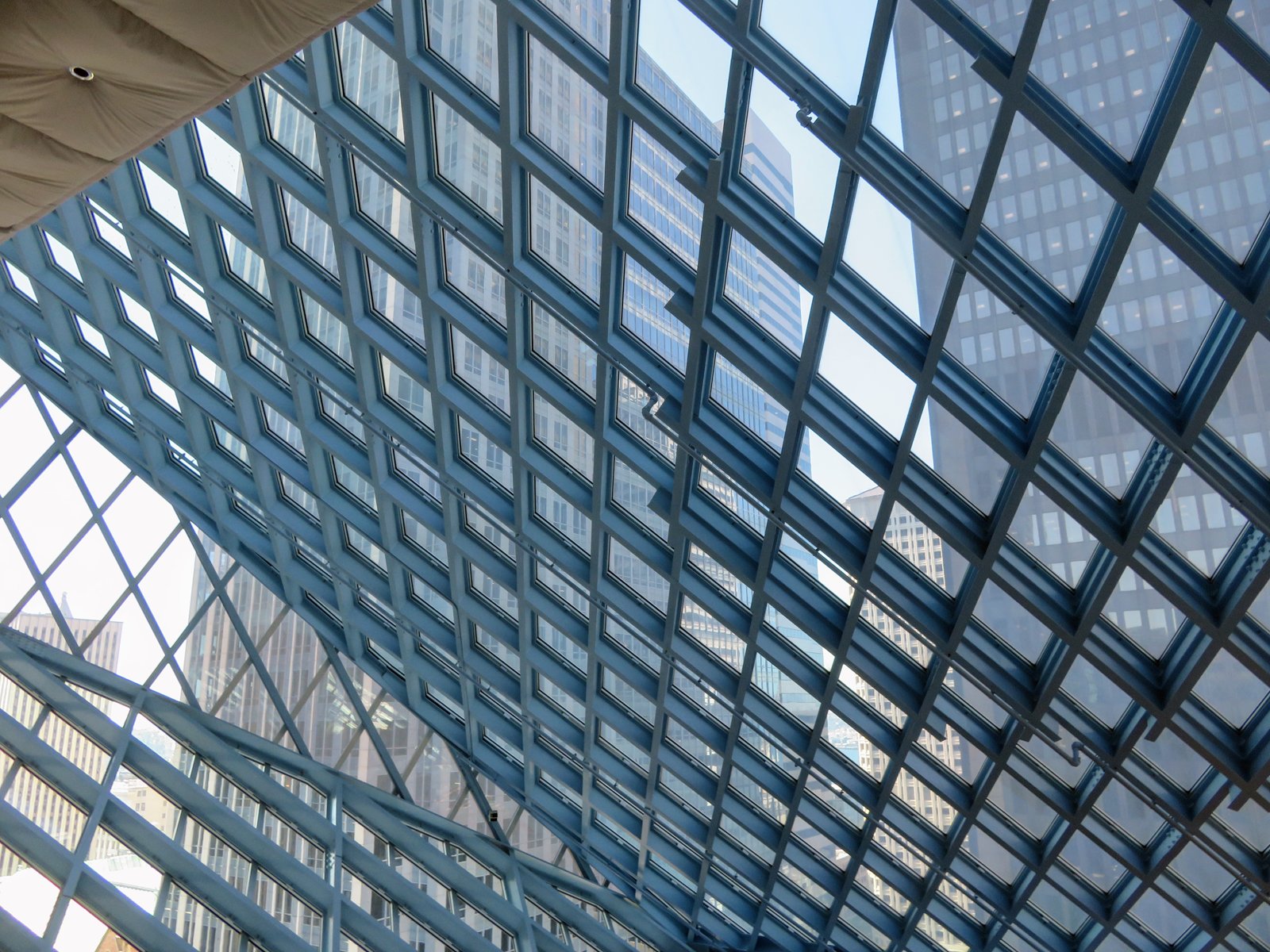 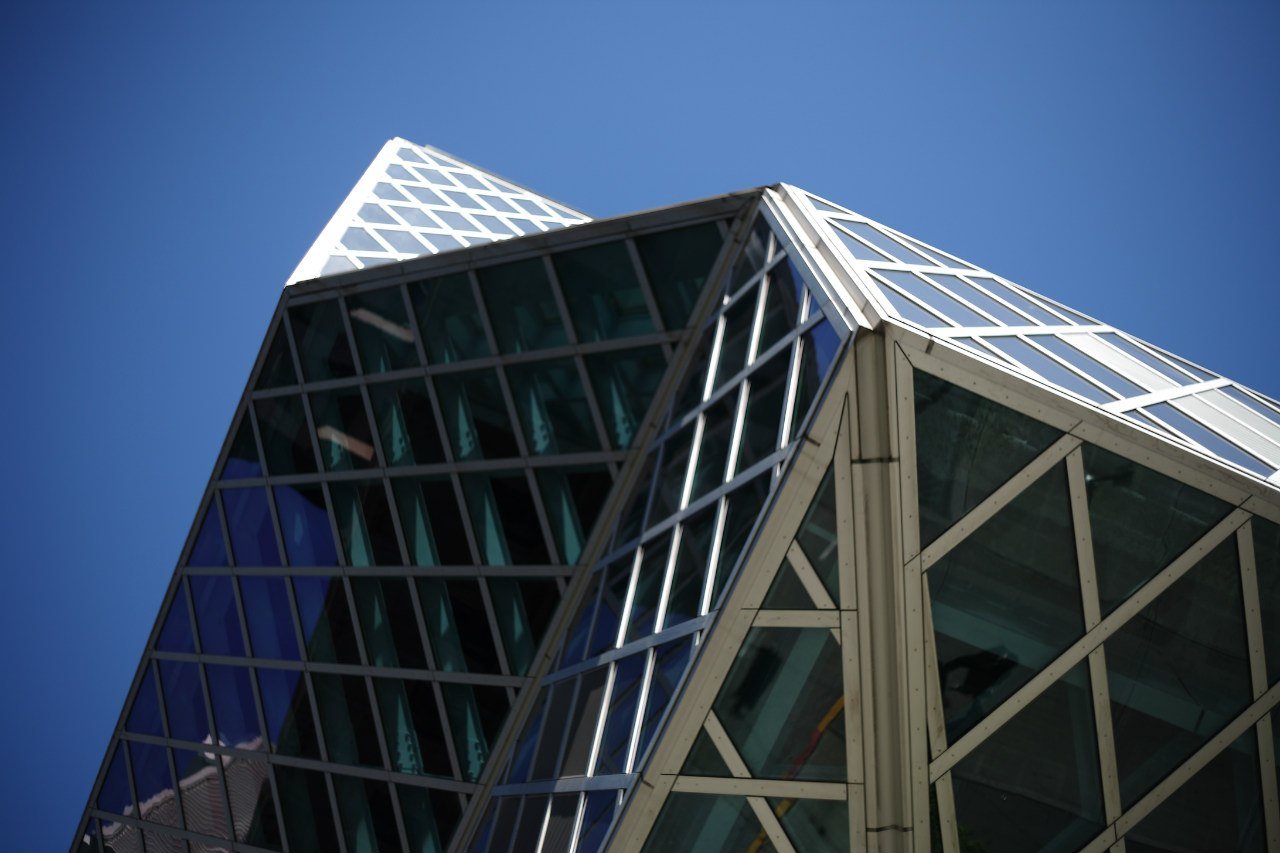 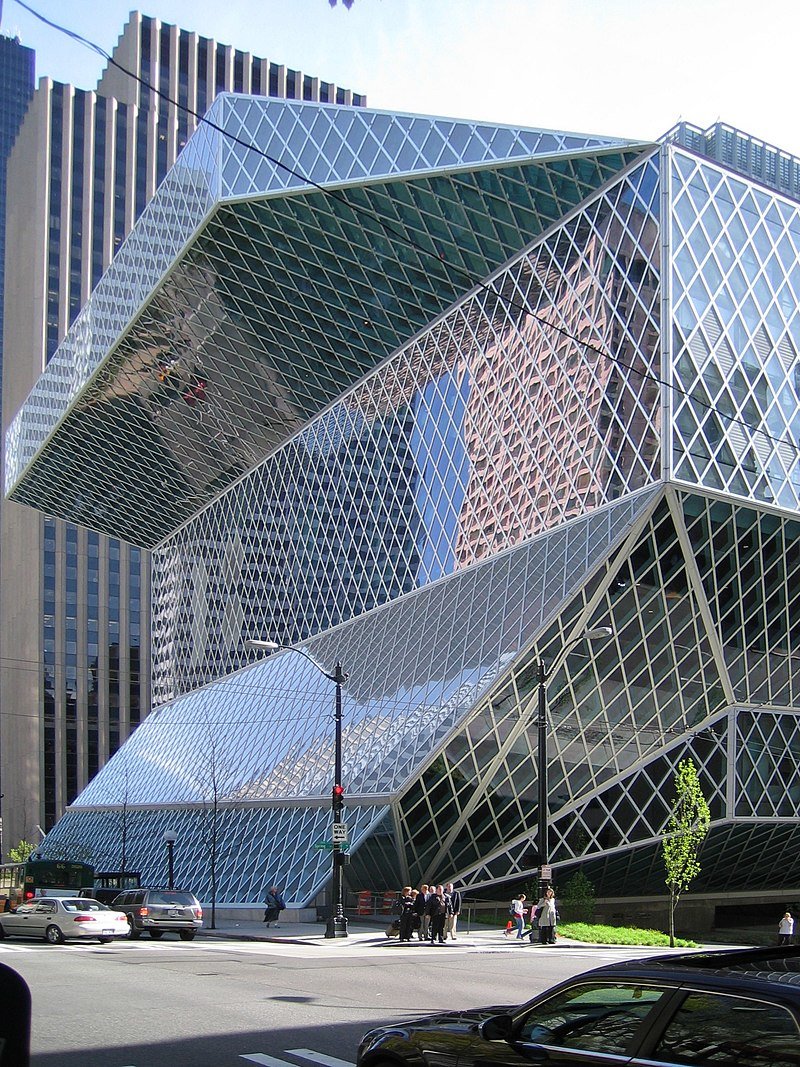 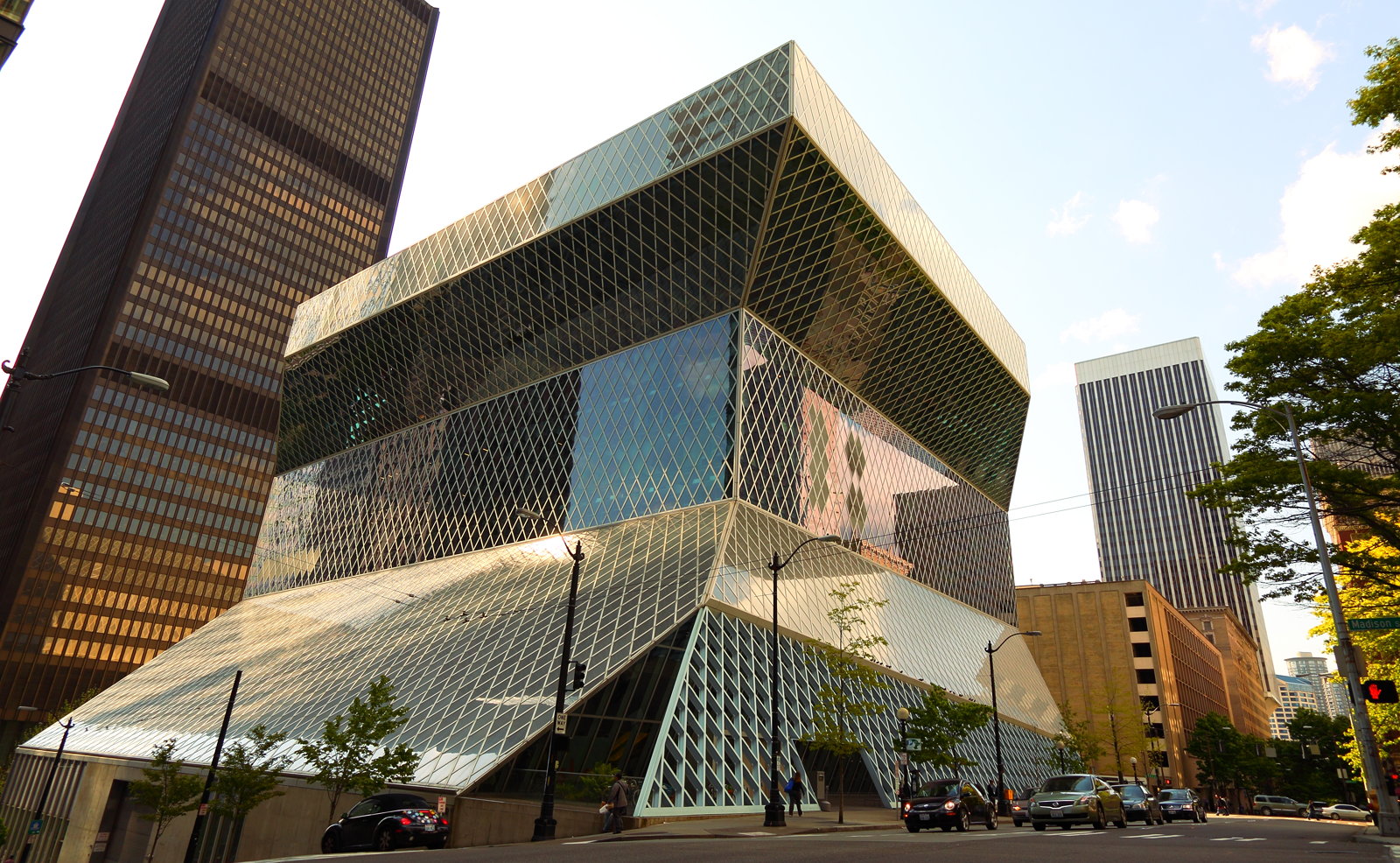 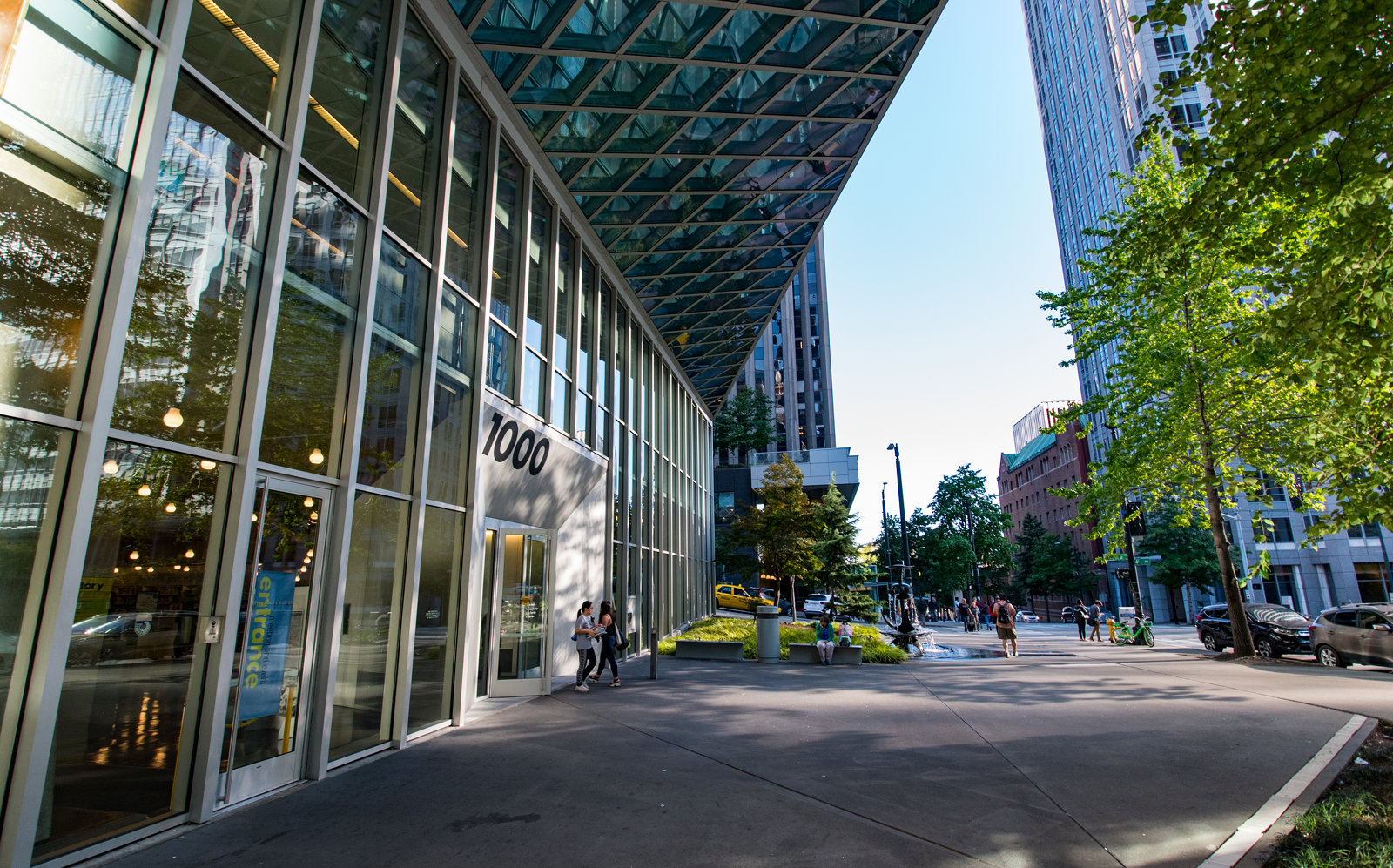 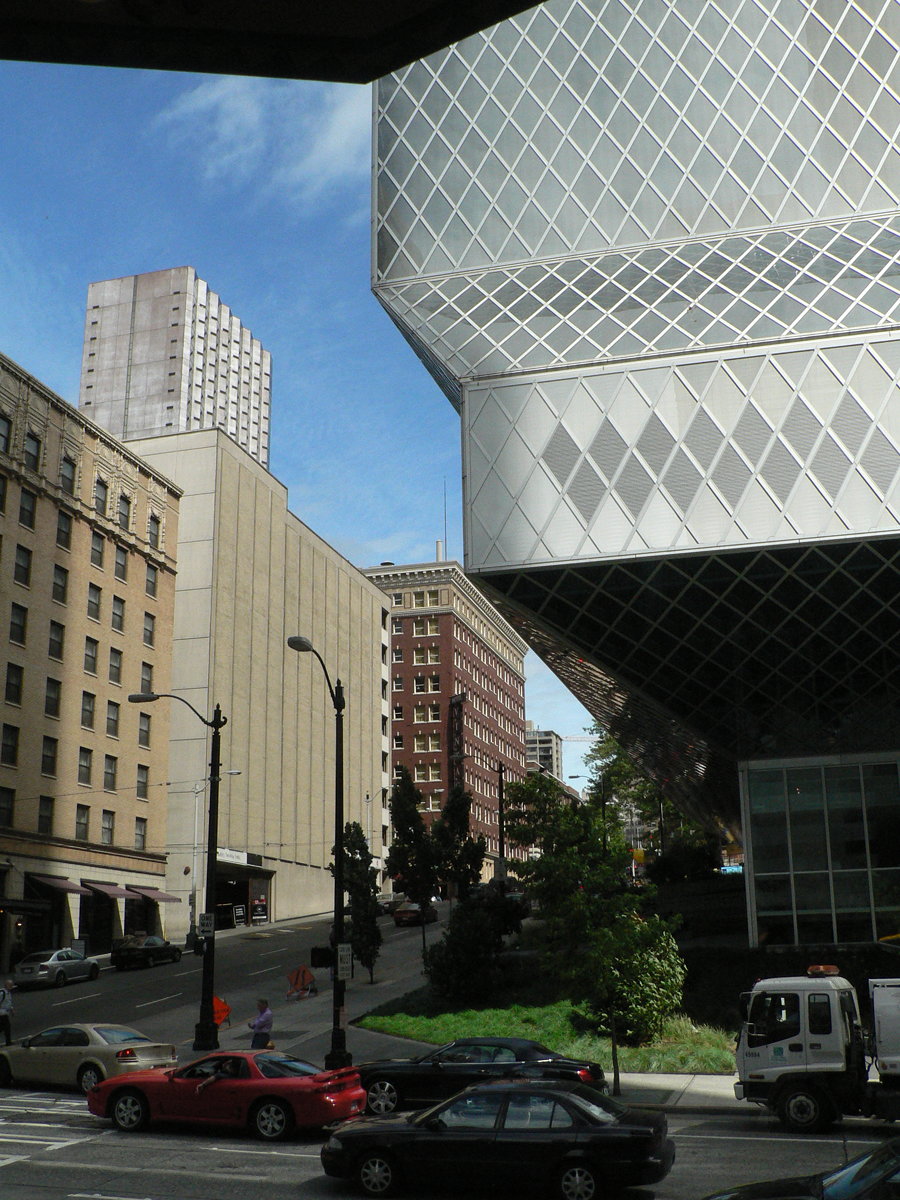 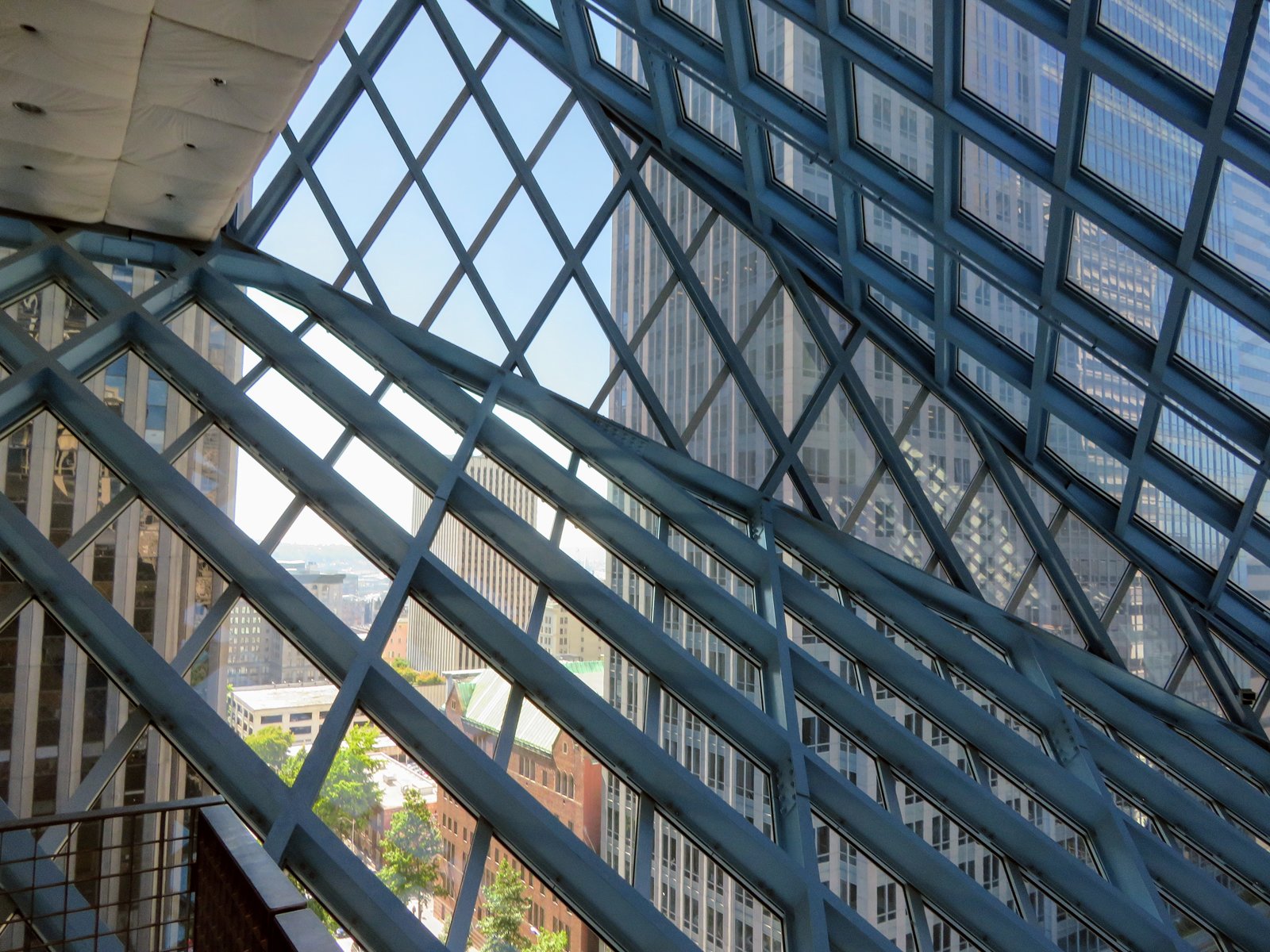 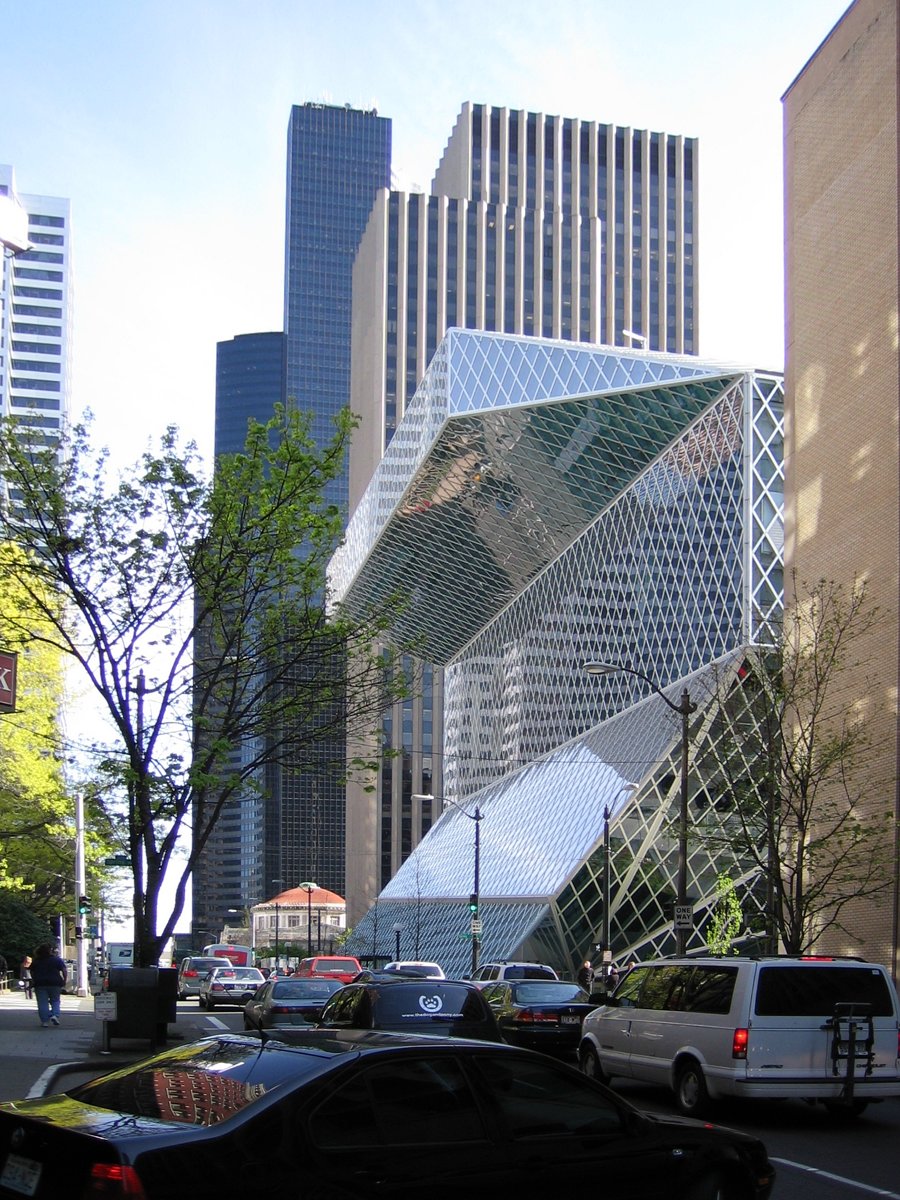 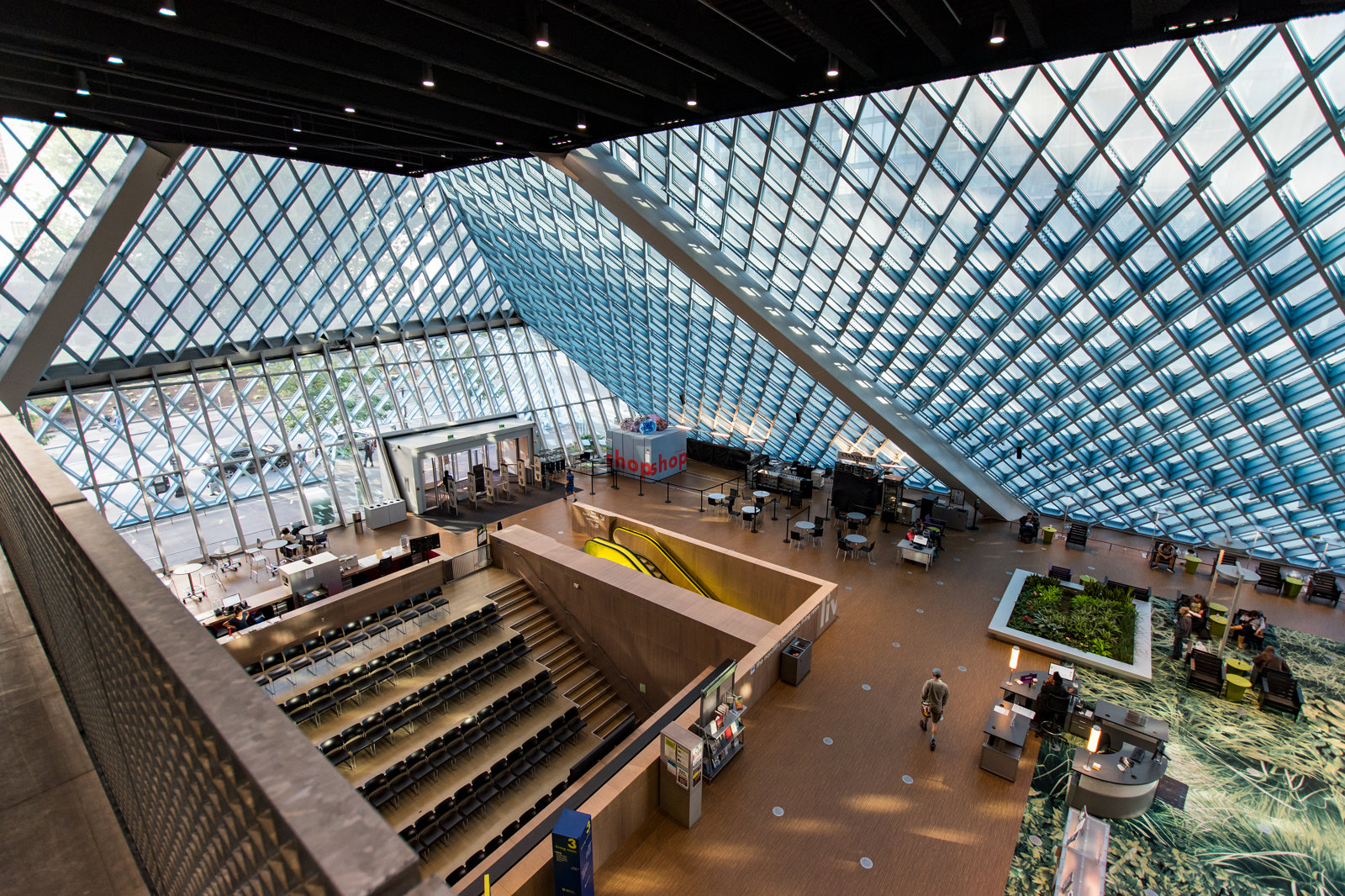 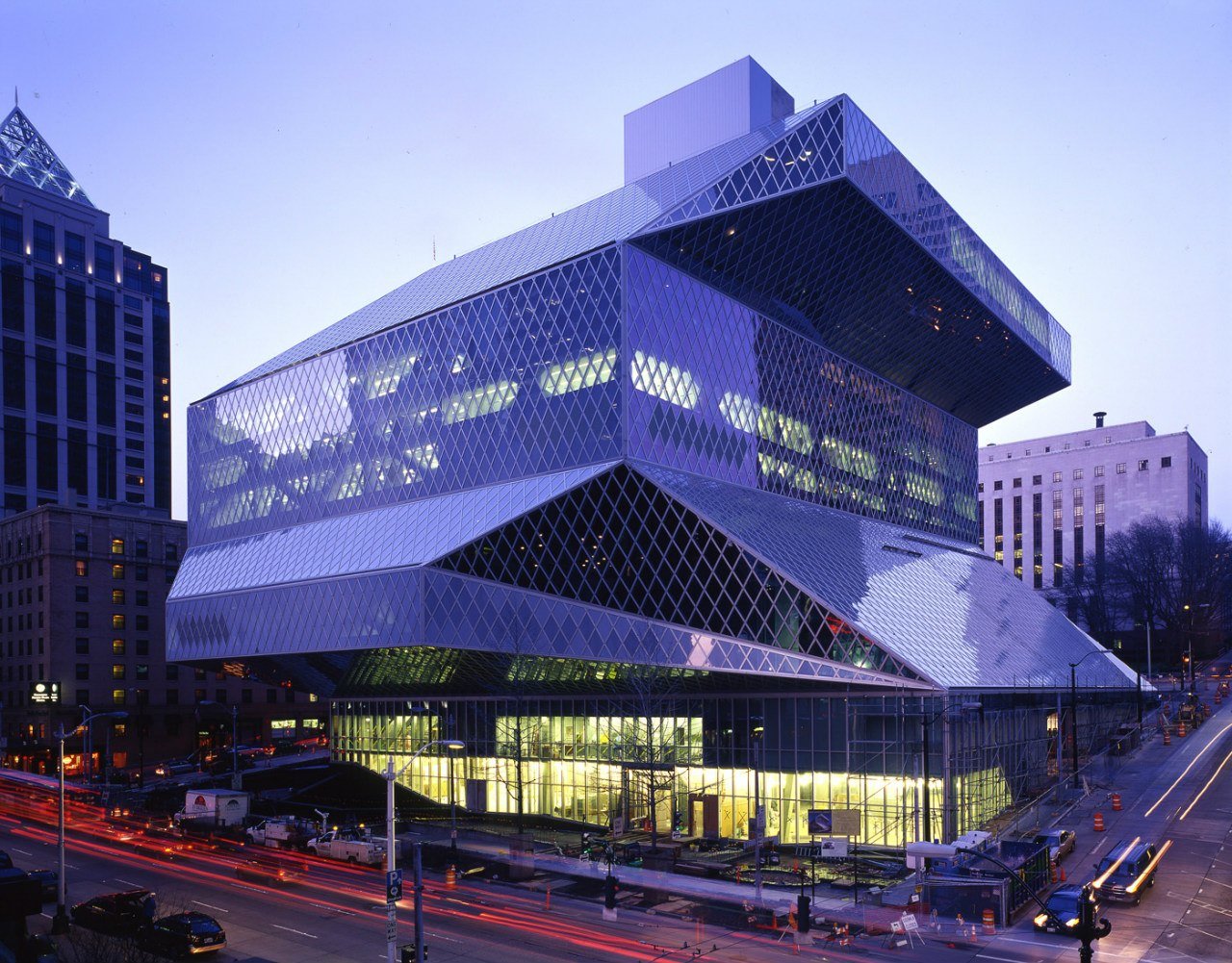 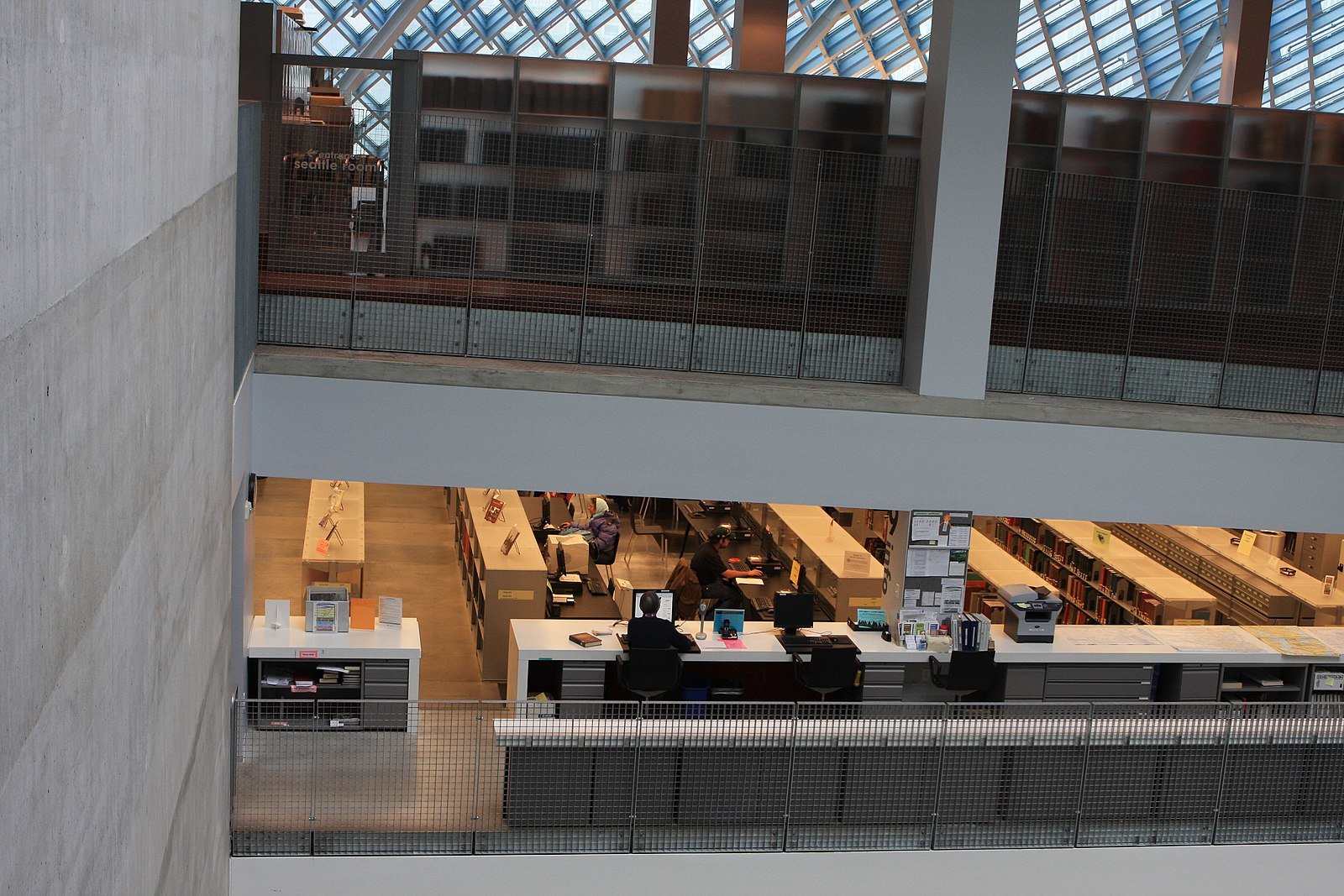 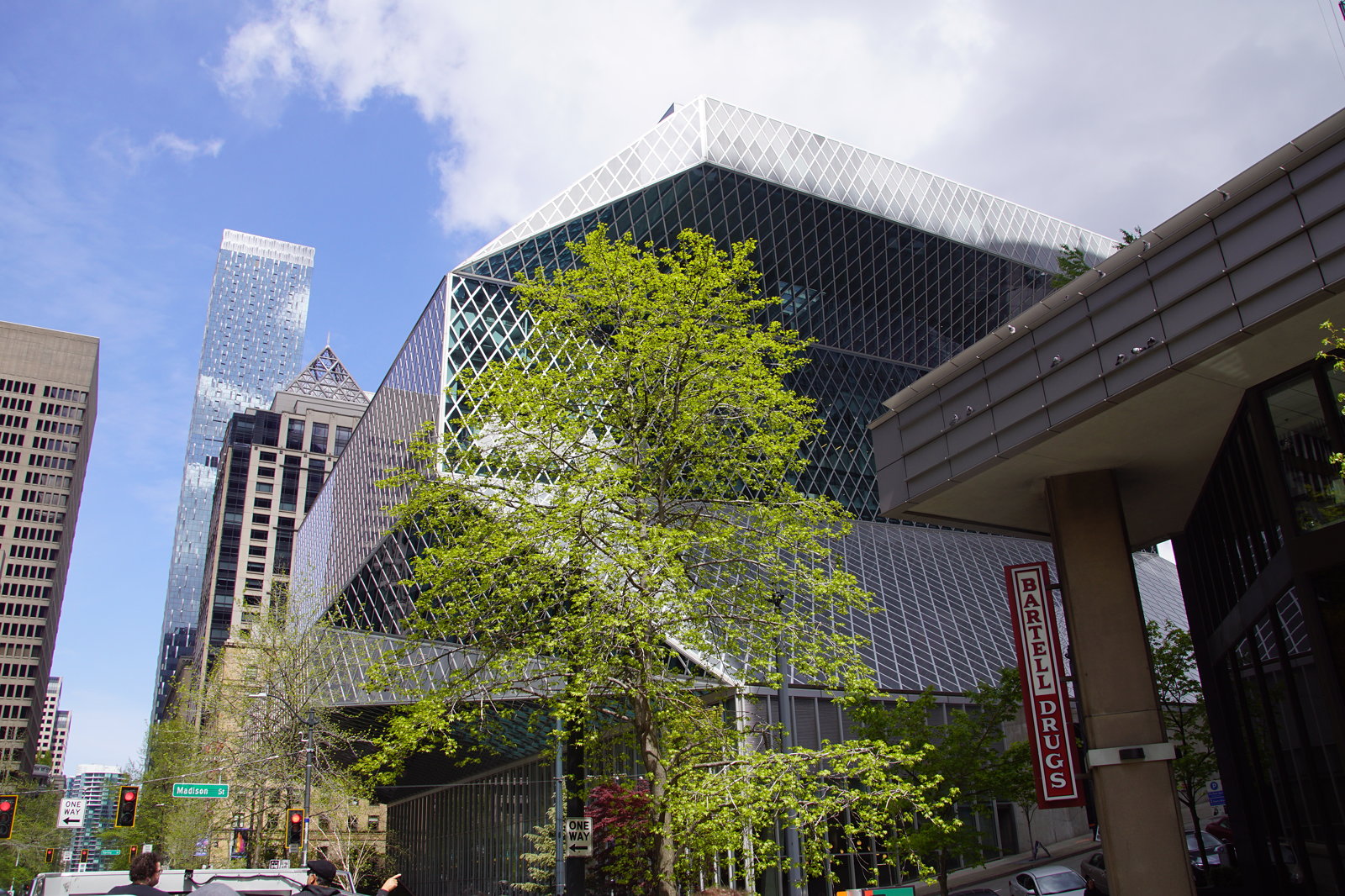 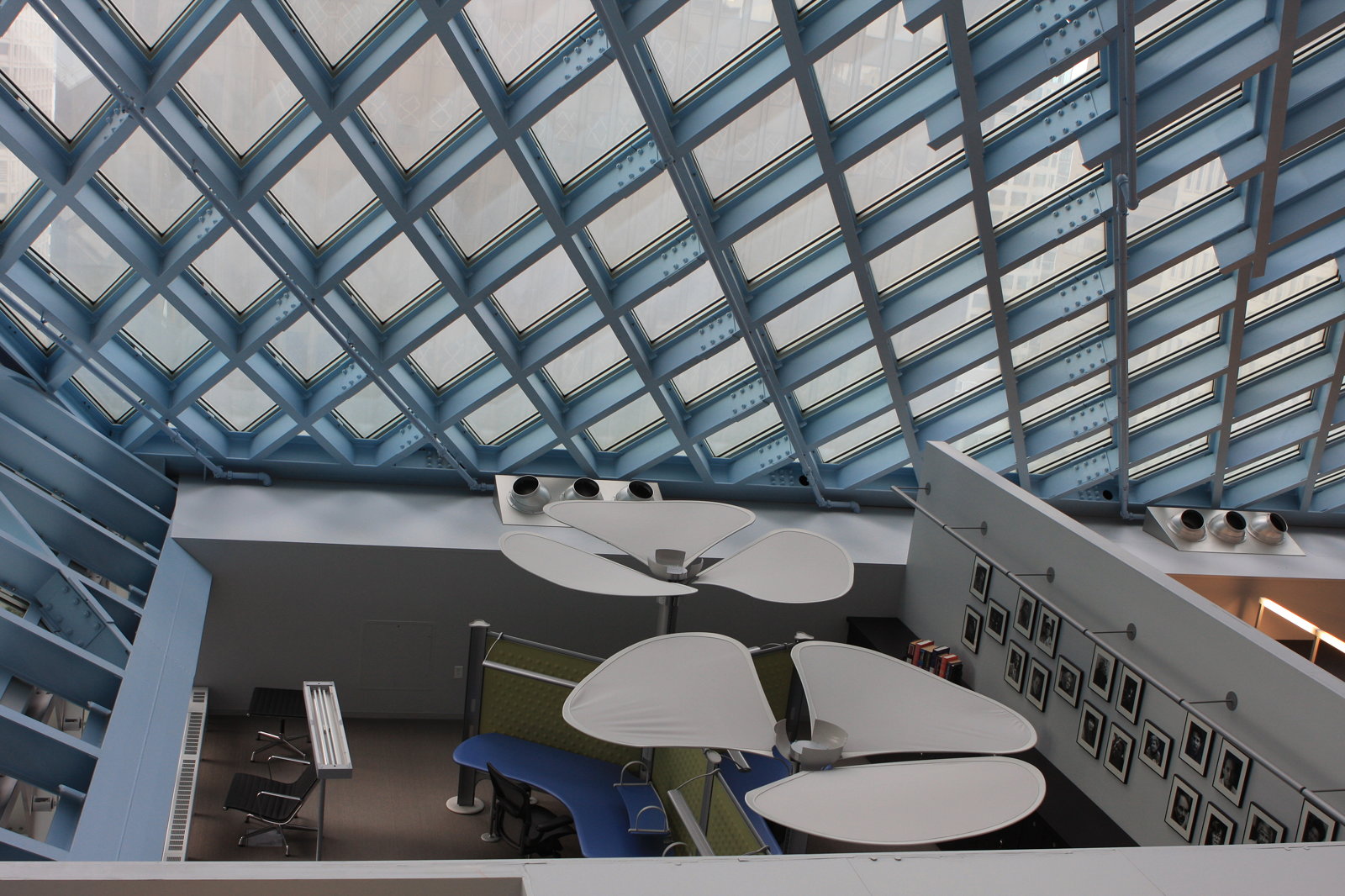