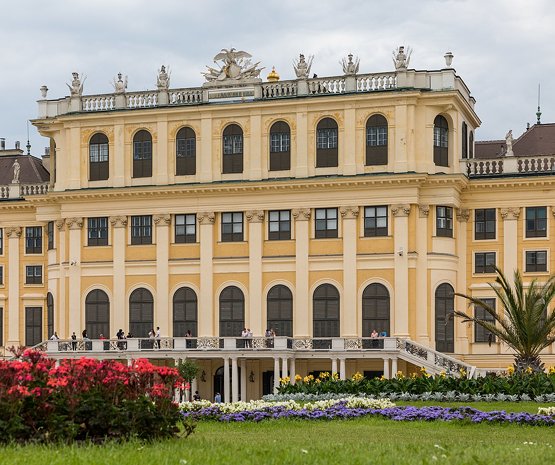 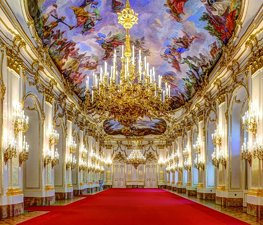 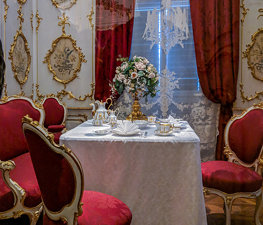 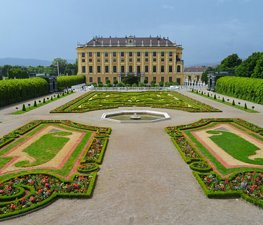 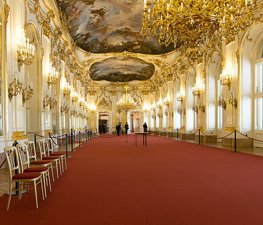 Schönbrunn Palace (Deutsch. Schloss Schönbrunn Шаблон:IPA) in Vienna is one of the most important cultural monuments in Austria and since the 1960s has also been one of the major tourist attractions in Vienna. The palace and gardens illustrate the tastes, interests, and aspirations of successive Habsburg monarchs.

In the year 1569, Holy Roman Emperor Maximilian II purchased a large floodplain of the Wien river beneath a hill, situated between Meidling and Hietzing, where a former owner, in 1548, had erected a mansion called Katterburg. The emperor ordered the area to be fenced and put there game such as pheasants, ducks, deer and boar, in order to serve as court's recreational hunting ground. In a small separate part of the area, "exotic" birds like turkeys and peafowl were kept. Fishponds were built, too.

The name Schönbrunn ("beautiful well"), has its roots in an artesian well from which water was consumed by the court: Legend has it that the emperor, when seeing it the first time, had called out "What a beautiful well!".

During the next century, the area was used as a hunting and recreation ground. Especially Eleonore Gonzaga, who loved hunting, spent much time there and got the area as her widow's residence after the death of her husband, Ferdinand II. From 1638 to 1643, she added a palace to the Katterburg. To 1642, however, dates the first mention of "Schönbrunn", on an invoice. The origins of the Schönbrunn orangery seem to go back to Eleonore Gonzaga as well: It is reported that "about a hundred Italian trees" were kept to please that Italian lady, among them two dozen bitter orange trees ("Pomeranzen").

In the Turkish siege of 1683, the buildings were destroyed, and never restored.

Emperor Leopold I gave architect Johann Bernhard Fischer von Erlach the order to design a new palace. His first draft was a very utopian one, dealing with different antique and contemporary ideals and trying to top its role model Versailles. His second draft showed a smaller and more realistic building. Construction began 1696 and after three years the first festivities were held in the newly built middle part of the palace.

Few parts of the first palace survived that century, because especially Maria Theresa of Austria to whom the estate was made as a present by her father (who, himself, had shown but little interest in it) had decided to make it the imperial summer residence, after she was crowned. She ordered her architect-of-the-court Nicolò Pacassi to reshape the palace and garden in a way of the style of the Rococo era. At the end of the so-called Theresianian epoch, Schönbrunn Palace was a vigorous centre of Austria's empire and the imperial family, and stayed their summer residence until the more-or-less "abdication" of Charles I of Austria, in 1918.

In the 19th century one name is closely connected with Schönbrunn's, Emperor Franz Josef I of Austria. He was born there, spent the majority of his life there and died there on November 21, 1916 in his sleeping room. Through the course of his 68-years reign, Schönbrunn Palace was seen as a Gesamtkunstwerk (total work of art) and remodelled in accordance with its history.

The sculpted garden space between the palace and the Neptune Well (viewn towards Gloriette, which is on top of the hill) is called the Great Parterre ["Great Ground Floor"]. The French garden, a big part of the area, was planned by Jean Trehet in 1695. It contains, among others, a maze.

The complex however includes by far more attractions: Besides the Tiergarten, world's oldest existing zoo (founded in 1752), an orangerie erected around 1755, staple luxuries of European palaces of its type, a Palm house (replacing, by 1882, around ten earlier and smaller glass houses in the western part of the park) is noteworthy. Western parts were turned into English garden style in 1828–1852. At the outmost western edge, a botanical garden going back to an earlier arboretum was re-arranged in 1828, when the Old Palm House was built. This one is currently being restored and partly will be house a modern enclosure for Orang-Utans, besides a restaurant and office rooms. It will be re-opened in 2009.

Lining the Great Parterre are 32 sculptures , which are allegories of deities and virtues.

The garden axis points towards a 60 meters higher hill, which since 1775 is crowned by the Gloriette structure (remember that Fischer von Erlach had initially planned to erect the main palace on top of that hill).

Maria Theresa decided Gloriette to be designed to glorify Habsburg's power and the Just War [a war that would be carried out of 'necessity' and lead to peace], and thereby ordered to recycle "otherwise useless stone" which was left from the almost-demolition of Schloss Neugebäude. Same material was also to be used for the Roman ruin.

The Gloriette today houses a café and gives the visitor a view of the city.

Originally known as the Ruin of Carthage, the Roman Ruin was designed by the architect Johann Ferdinand Hetzendorf von Hohenberg and erected as an entirely new architectural feature in 1778. Fully integrated into its parkland surroundings, this architectural ensemble should be understood as a picturesque horticultural feature and not simply as a ruin, which due to lack of maintenance it had increasingly grown to resemble prior to its recent restoration.

The fashion for picturesque ruins that became widespread with the rise of the Romantic movement soon after the middle of the 18th century symbolise both the decline of once great powers and the preservation of the remains of a heroic past. Erected at the same time not far from the Roman Ruin, the Obelisk Fountain was intended to complete the iconographic programme of the park at Schönbrunn as a symbol of stability and permanence.

The Roman Ruin consists of a rectangular pool enclosed by a massive arch with lateral walls, evoking the impression of an ancient edifice slowly crumbling into the ground. In the pool in front of the ruin is a seemingly haphazard arrangement of stone fragments supporting a figural group which symbolises the rivers Danube and Enns.

The palace was recently selected as the main motif of a high value commemorative coin: the Austrian 10 euro The Palace of Schoenbrunn Silver coin, minted in October 8 2003. The obverse shows the central part of the frontage of the palace behind one of the great fountains in the open space.

Following the downfall of the monarchy in 1918 the newly founded Austrian Republic became the owner of Schönbrunn Palace and preserved, as a museum, the rooms and chambers.

After WWII and during the Allied Occupation of Austria (1945-1955) Schönbrunn Palace, which was empty at the time, was requisitioned to provide offices for both the British Delegation to the Allied Commission for Austria and for the Headquarters for the small British Military Garrison present in Vienna.

Later it was used for important events such as the meeting between John F. Kennedy and Nikita Khrushchev in 1961.

UNESCO catalogued Schönbrunn Palace on the World Heritage List in 1996, together with its gardens, as a remarkable Baroque ensemble and example of synthesis of the arts (Gesamtkunstwerk).

The Schloss is a very popular tourist destination today with often long lines for entrance. At the official website tickets can be purchased in advance for tours. In addition to tours, many classical concerts featuring the music of W. A. Mozart and his contemporaries can be enjoyed with the added benefit of more time in the spectacular halls, Orangerie, or Schlosstheater. Concerts, dinner concerts with tours included or packages with dinner, tour, concert and cruise are available and can be booked in advance through the firm of Classictic.

The gardens and palace have been the location for various movies, such as the Sissi trilogy in 1950s, in A Breath of Scandal with Sophia Loren and briefly in James Bond's The Living Daylights.

An extract from the book 'My Way of Telling History' by Robert M. Tidmarsh, covering the history of Schönbrunn Palace during its occupation by British troops. Reproduced by kind permission of Robert Tidmarsh and Schloß Schönbrunn Kultur- und Betriebsges.m.b.H.

Alperen Taş
it is huge. if you wanna see the whole thing , be ready to spend more than 3 hours.it is really amazing and you should walk until the peak where the big pillars are which is called Gloriette..

Edward Roozeboom
One word: HUGE! Go back in time and feel the breath of Sisi in this venue. You can take several tours, I recommend to take the Grand Tour! The gardens are free to visit and offers a spectacular sight

Amaury
Absolutely amazing, even though they don't allow pictures inside. Spend a good half a day here. Do the Grand Tour to immerse yourself truly into the history of the dynasty and this palace.

Florian Lecoq
This place is really beautiful! Nice place to walk and to enjoy the sun! I would recommend to just take the full palace ticket because the park is free and the other tickets doesn't worth it...

Mark B
Beautiful palace! Very large garden grounds. No pictures allowed inside :( All of the rooms are decorated with period pieces from 17th-19th century Hapsburg And Napoleonic Eras.
Load more comments
foursquare.com
9.1/10
Keenora Fluffball, Konstantin Lavrentye and 916,774 more people have been here
I've been here
Add to wishlist

The Palmenhaus Schönbrunn is a large greenhouse in Vienna, Austria,

A gloriette (from the 12th century French gloire meaning 'little

Tiergarten Schönbrunn (Schönbrunn Zoo) is a zoo located on the g

The Wüstenhaus Schönbrunn (Schönbrunn Desert House) is a desert bo

The Raimund Theater is a theatre in the Mariahilf district of Vienna,

The Шаблон:Nihongo is the former ruling palace of the Emperor of Japan 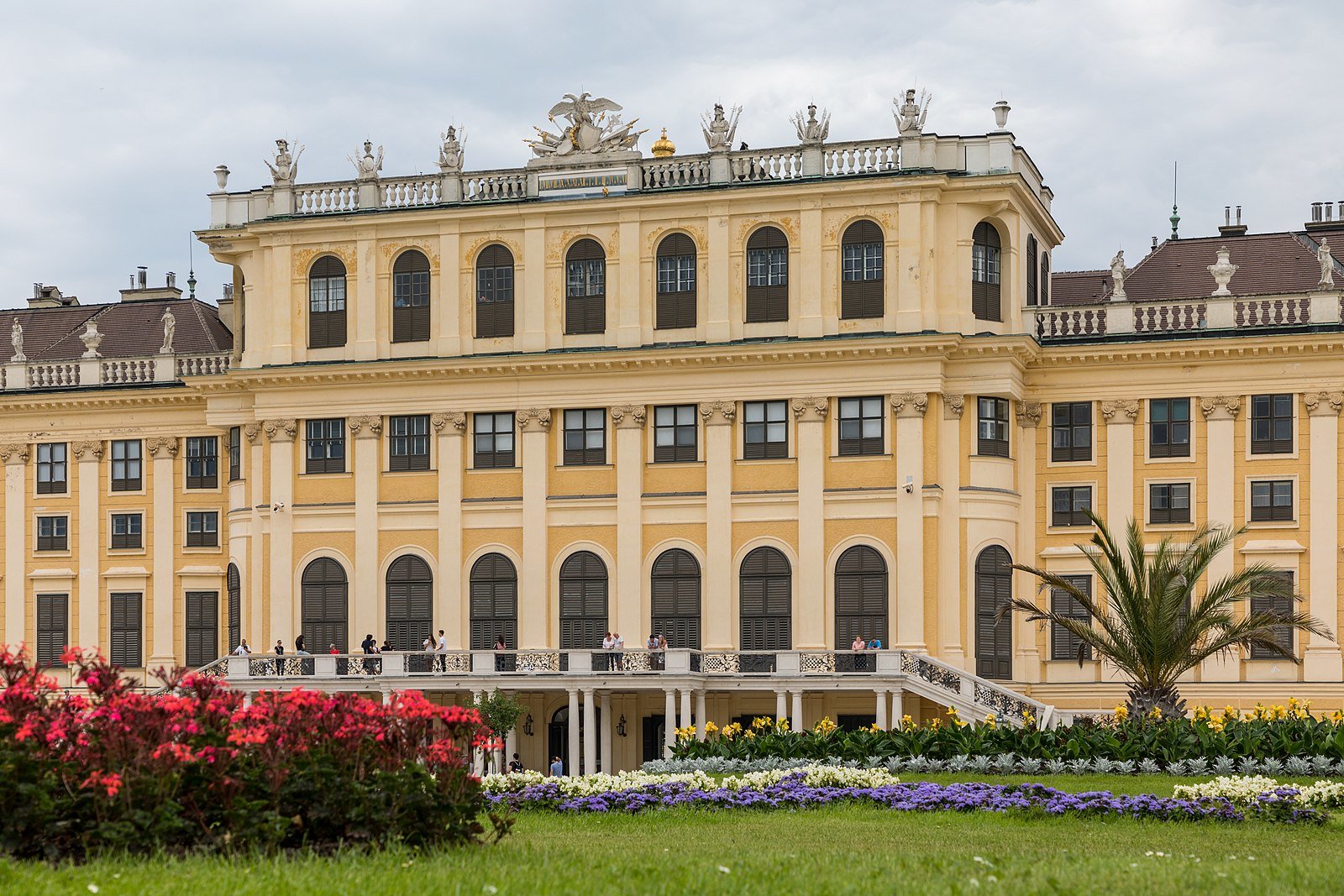 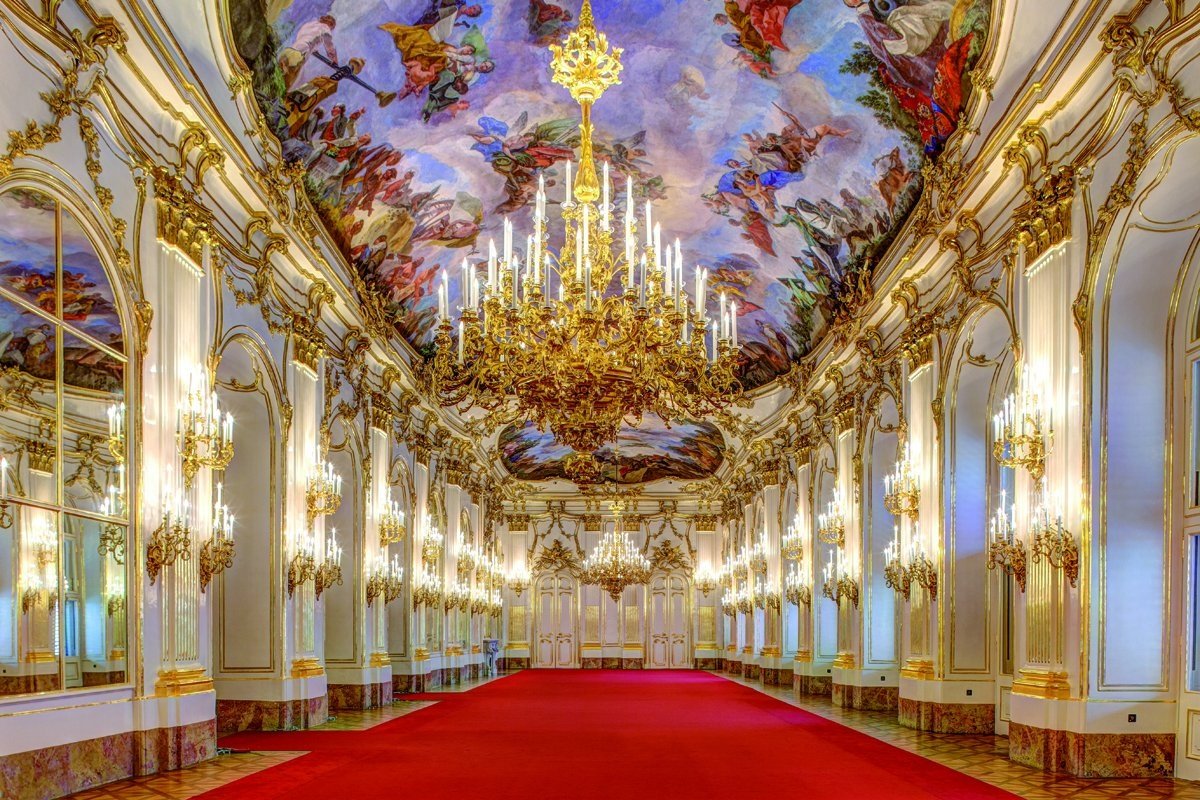 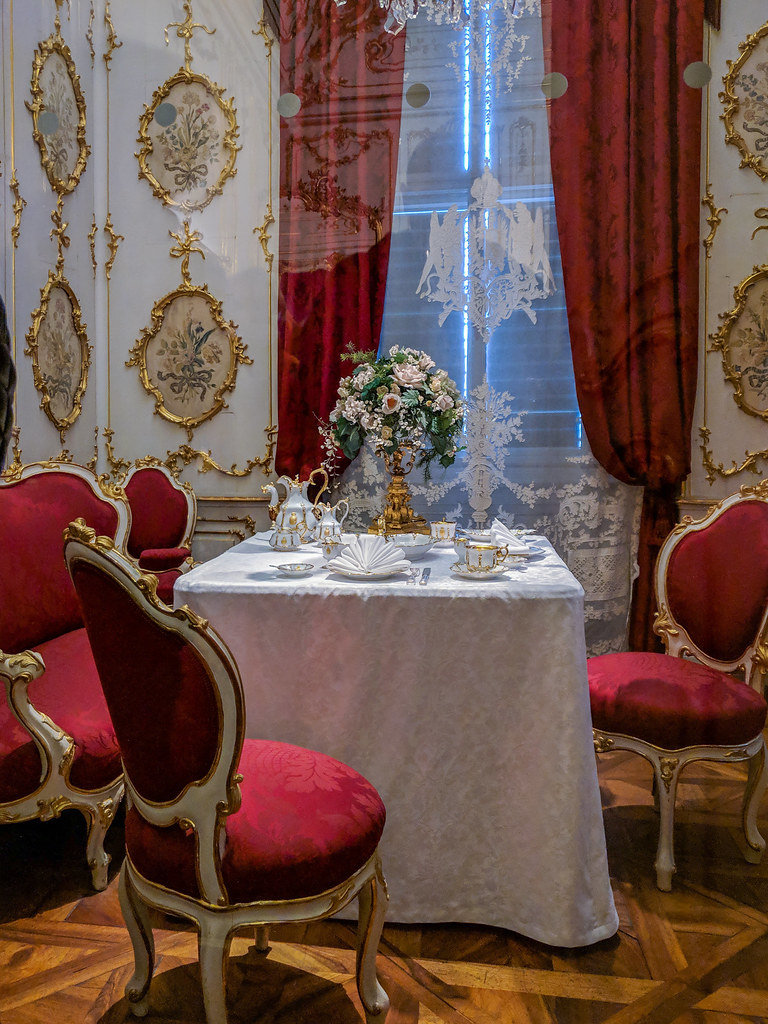 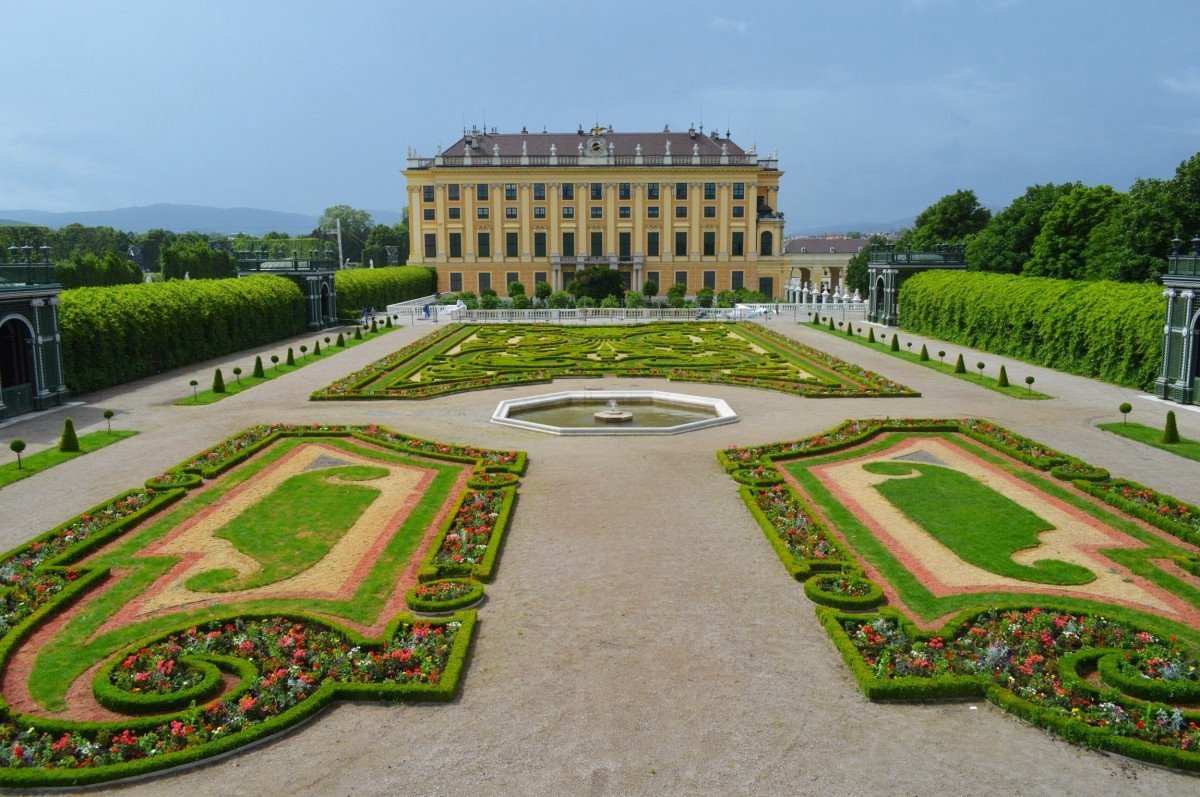 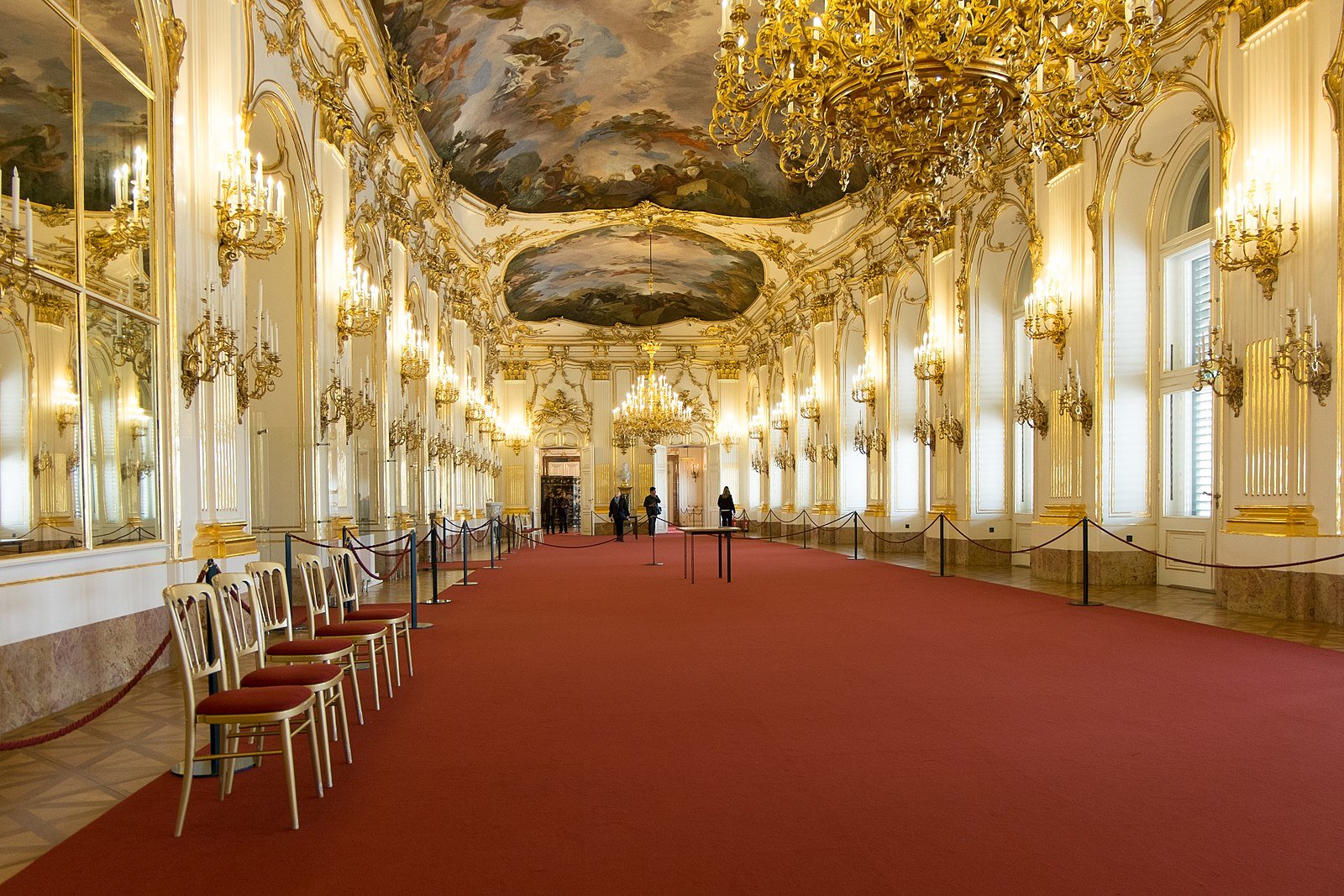 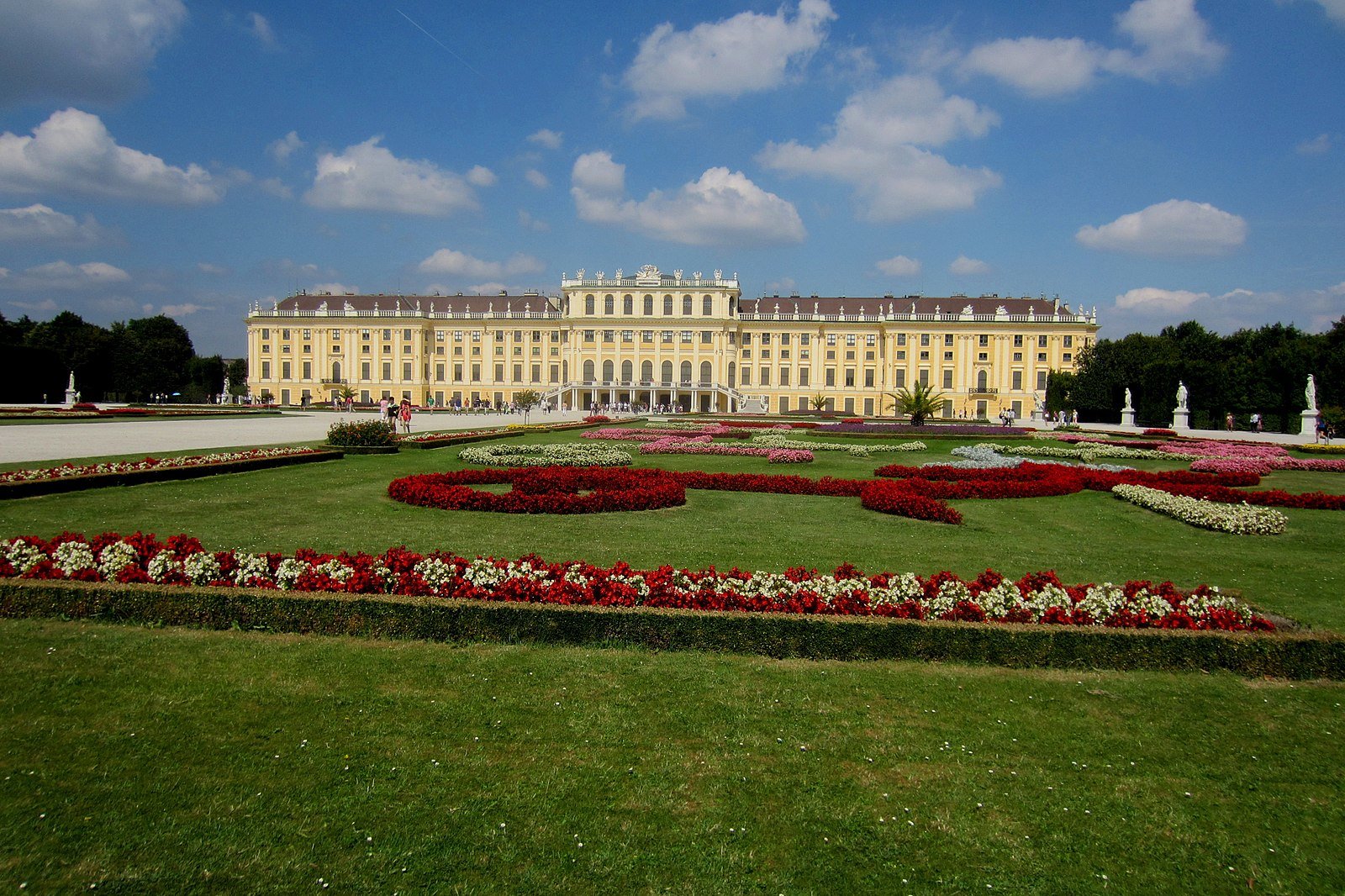 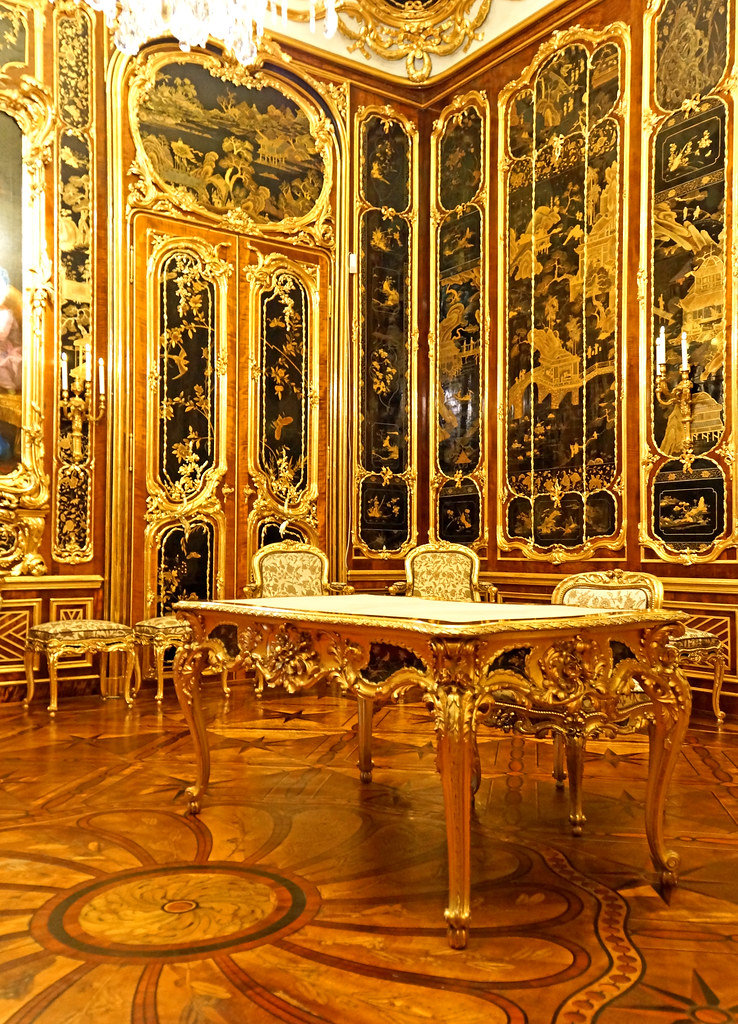 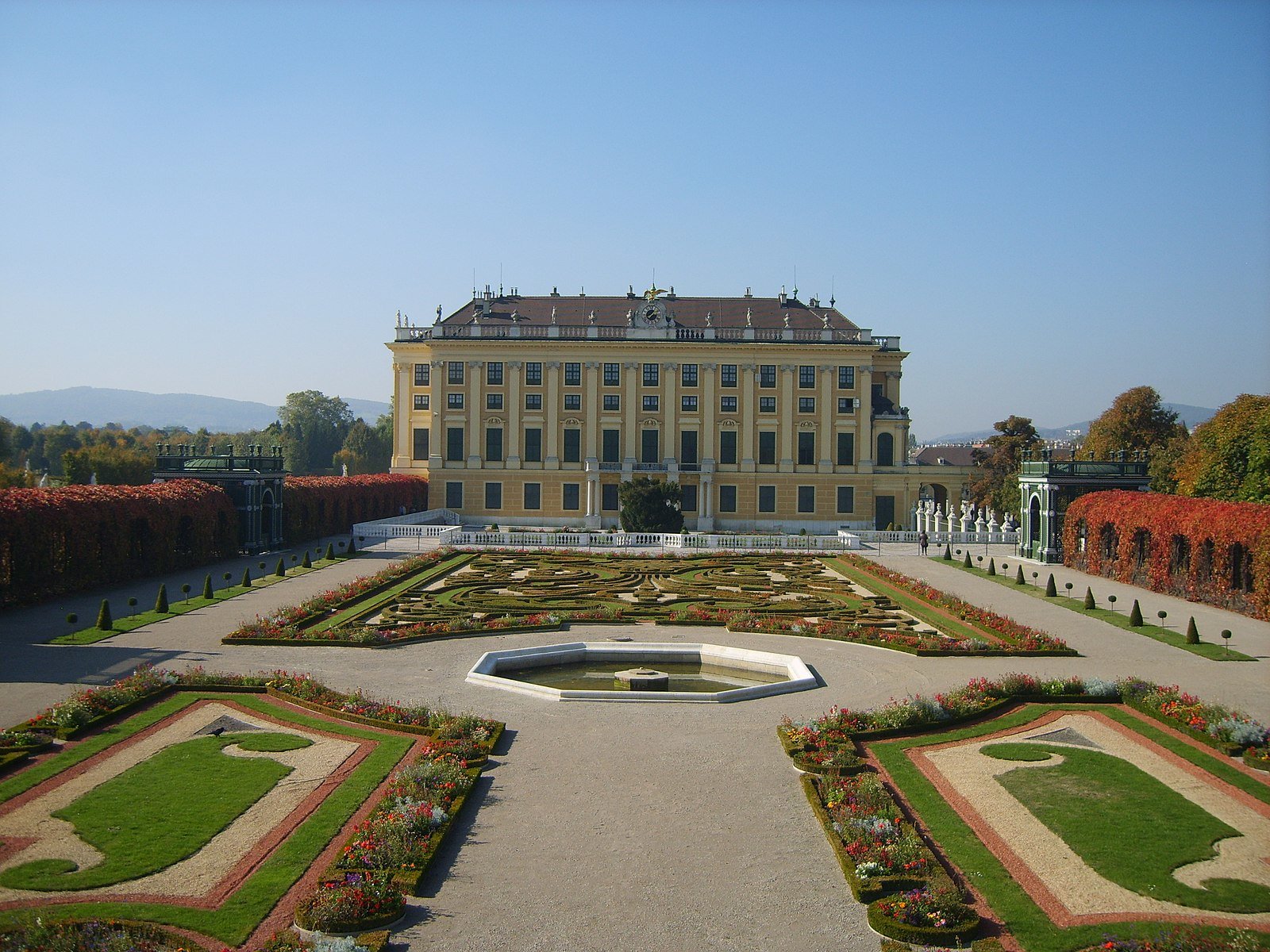 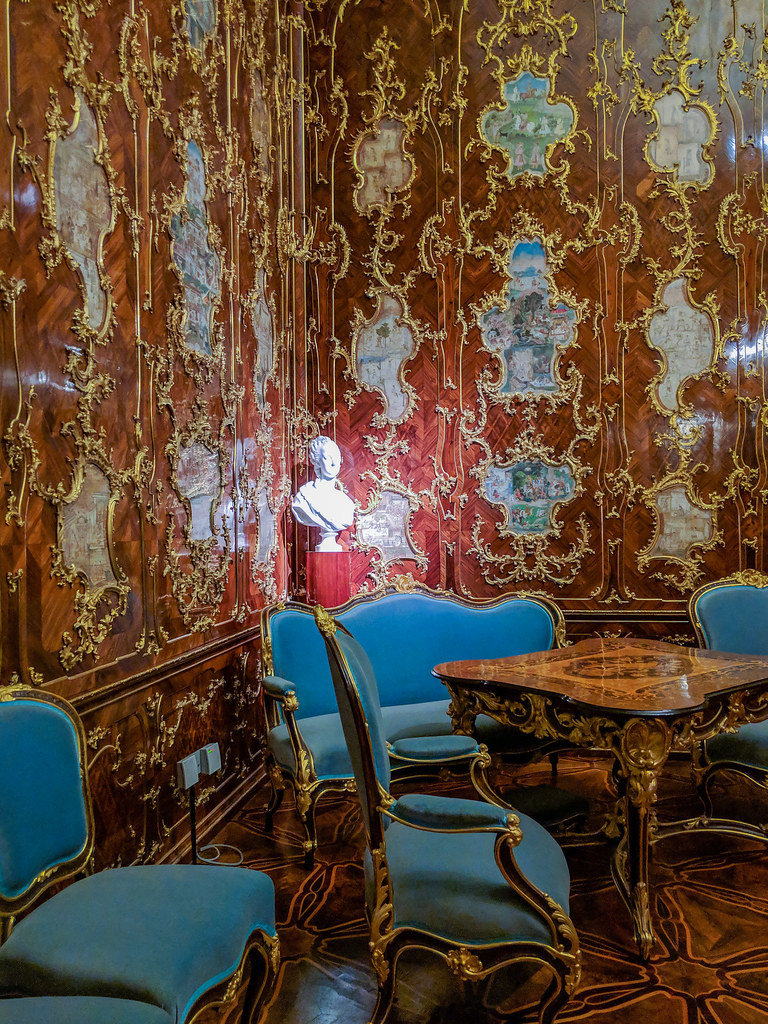 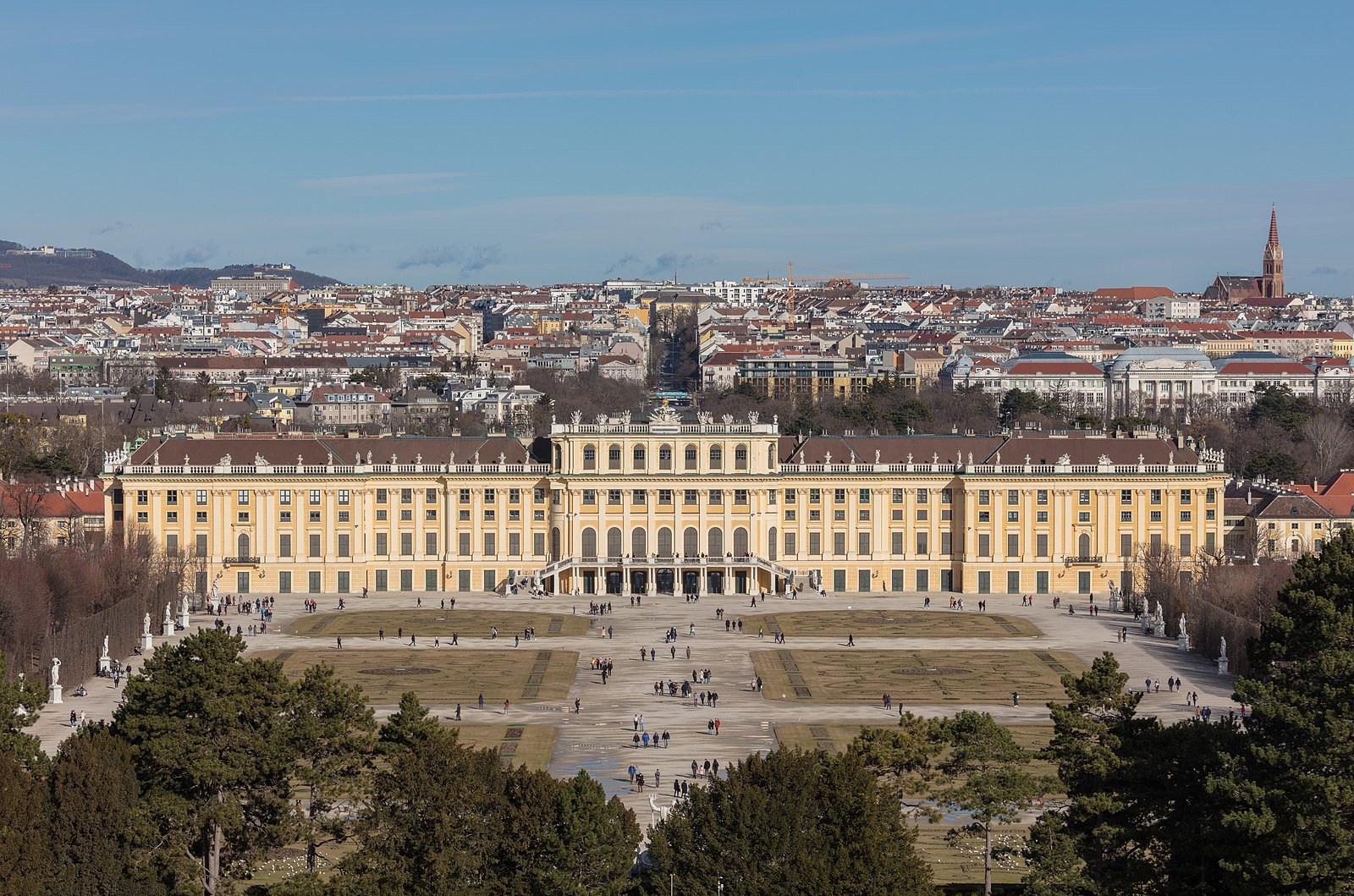 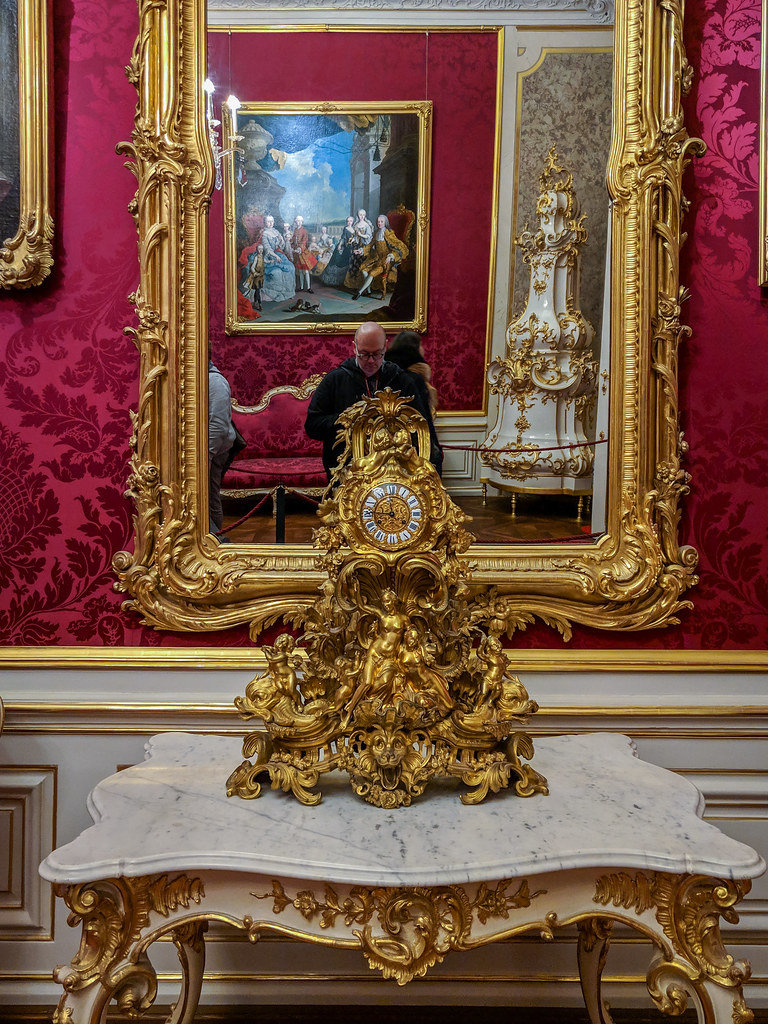 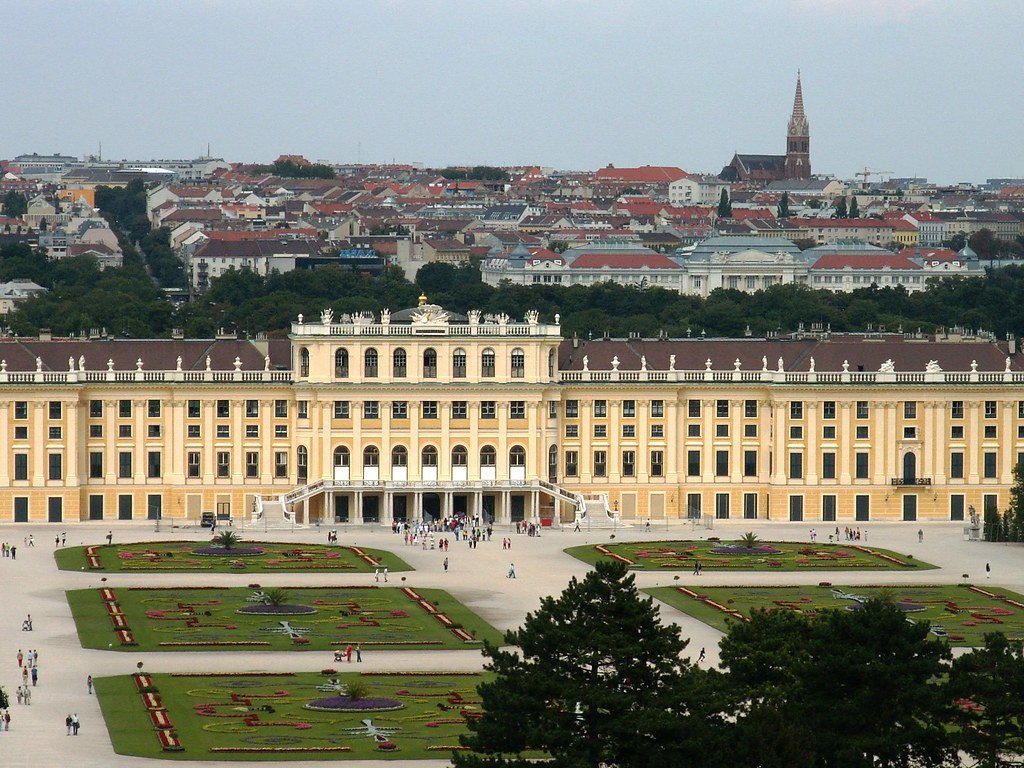 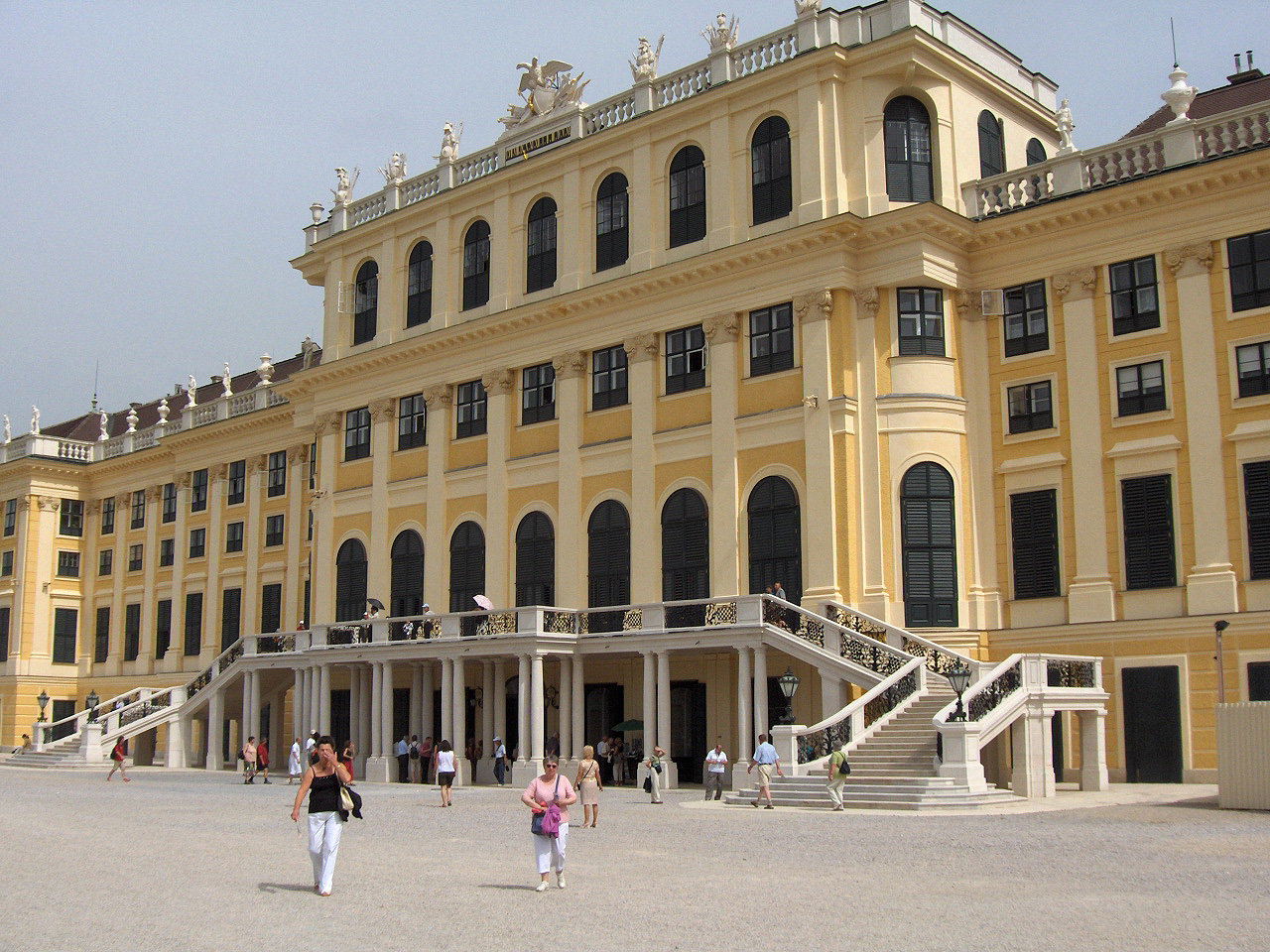 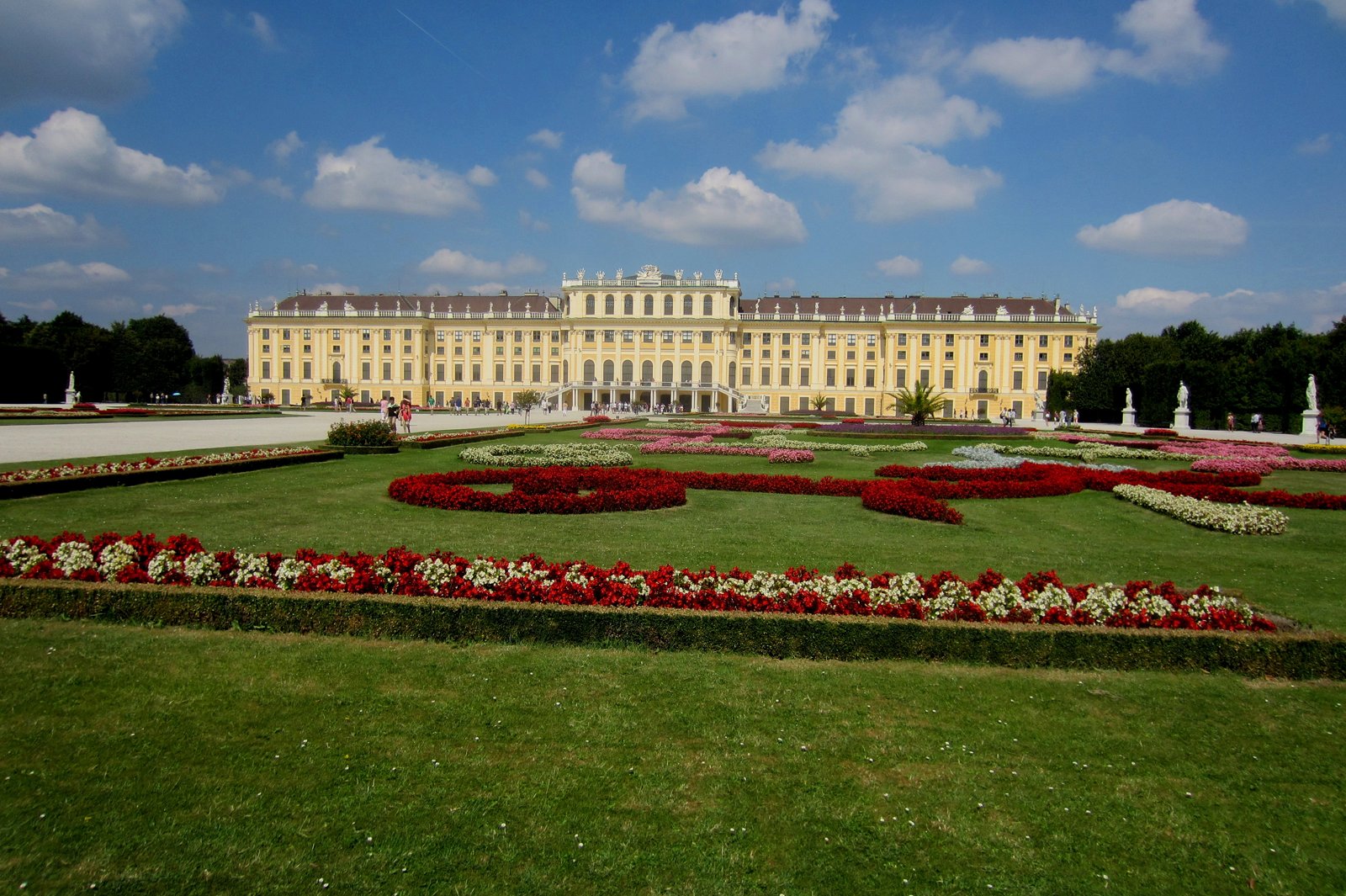 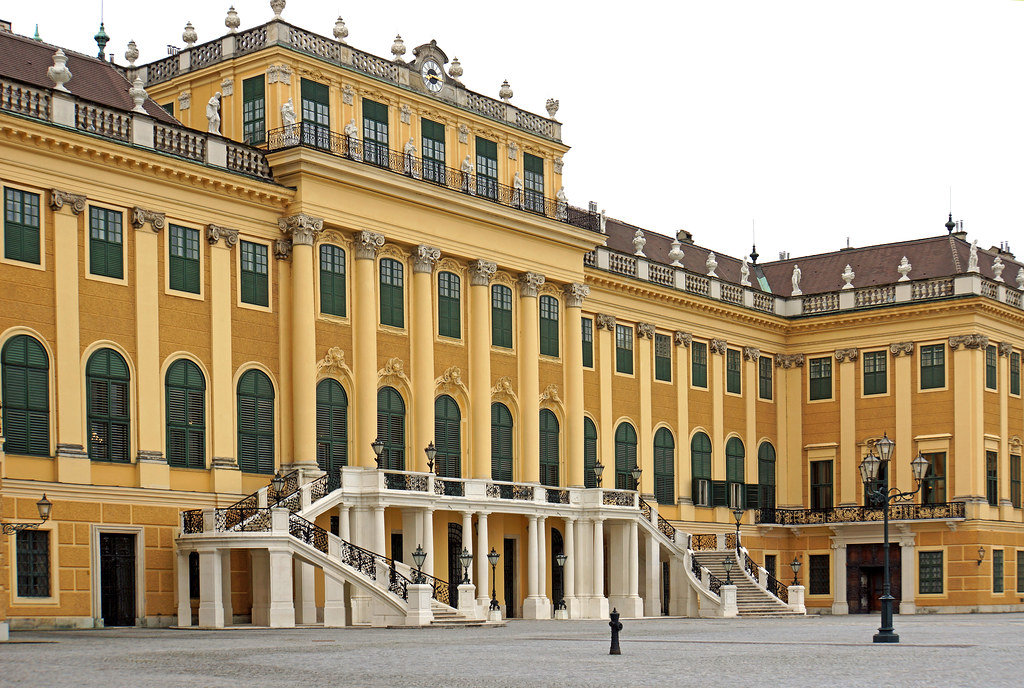 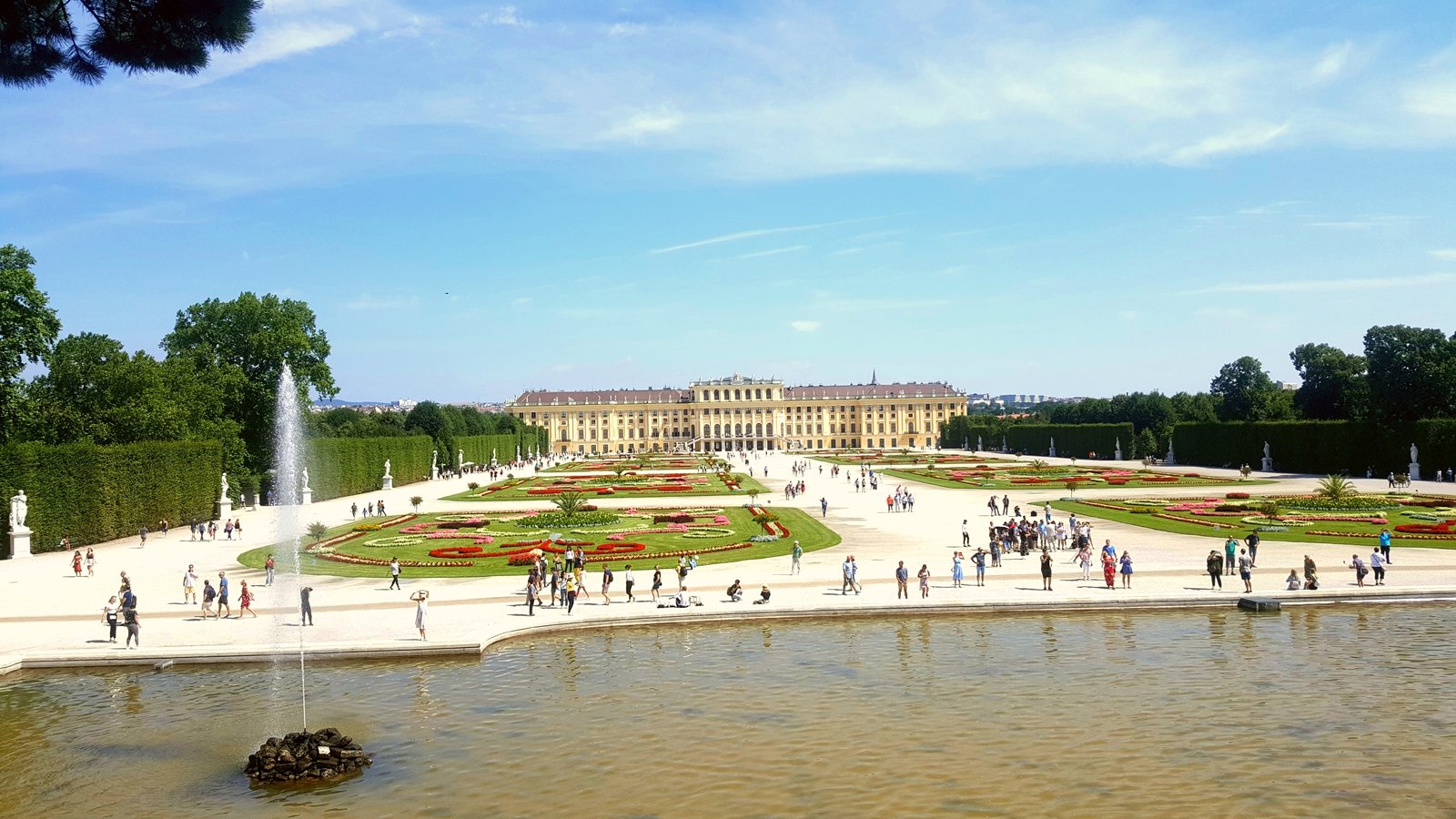 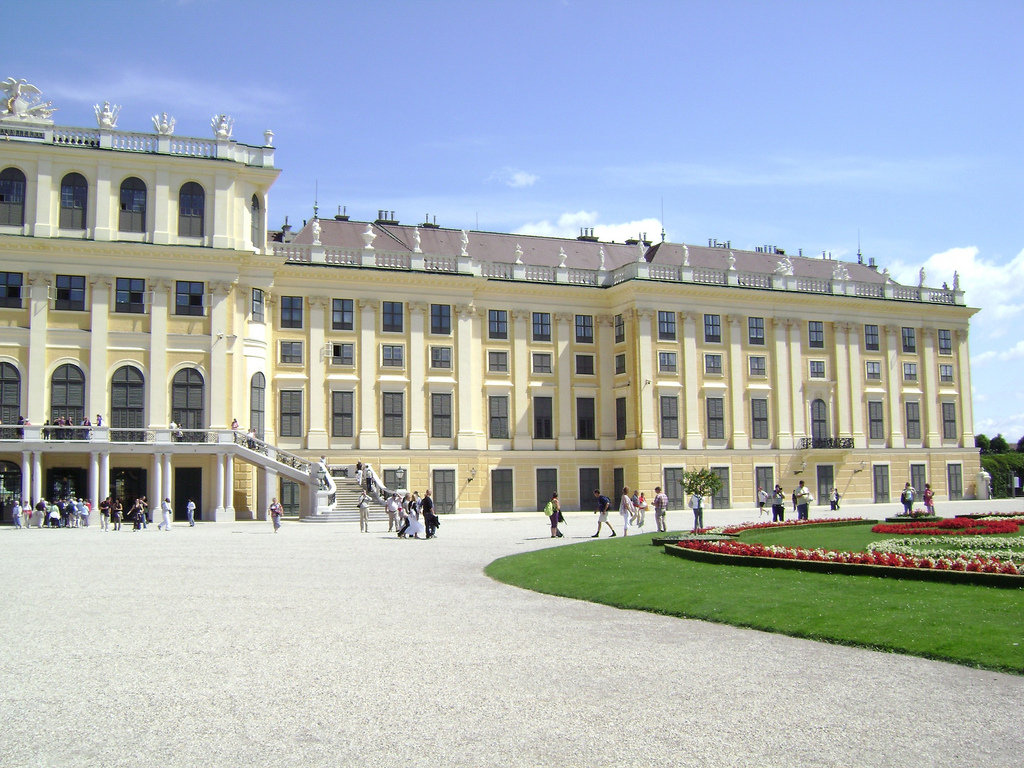 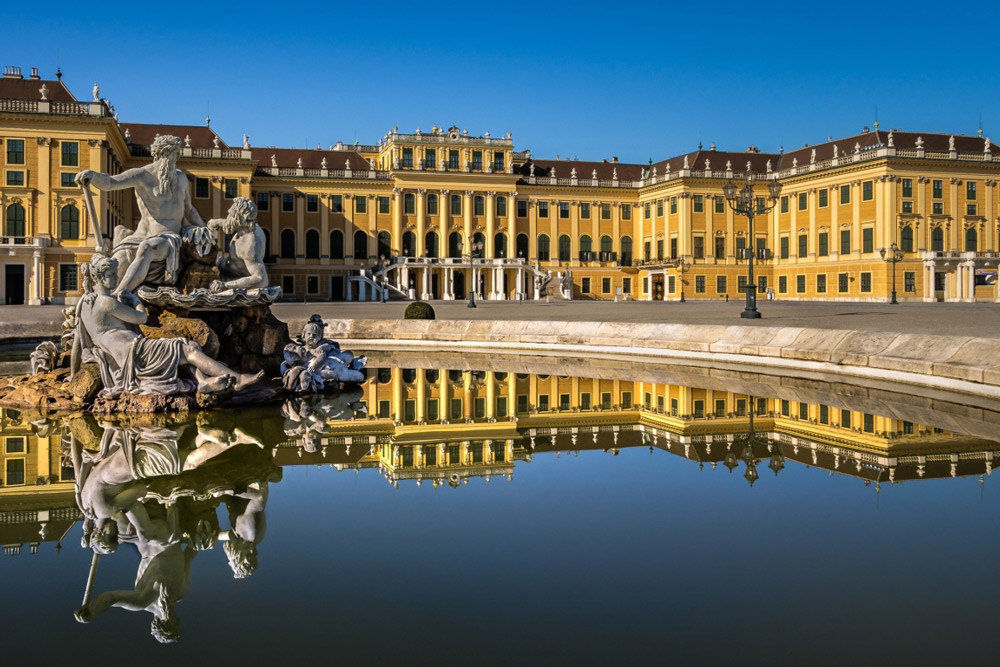 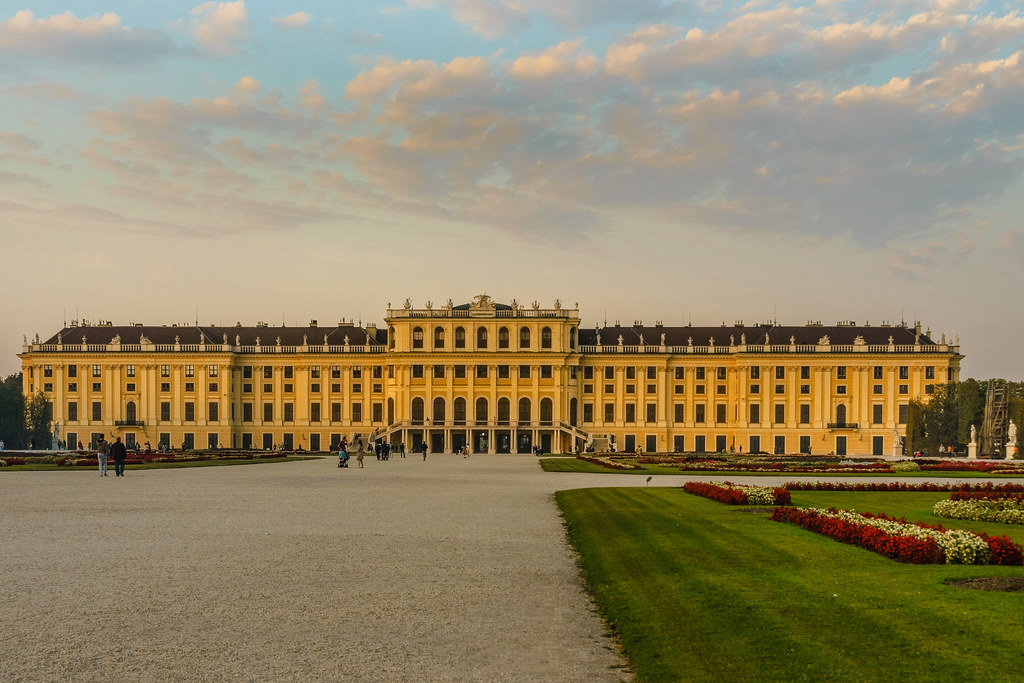 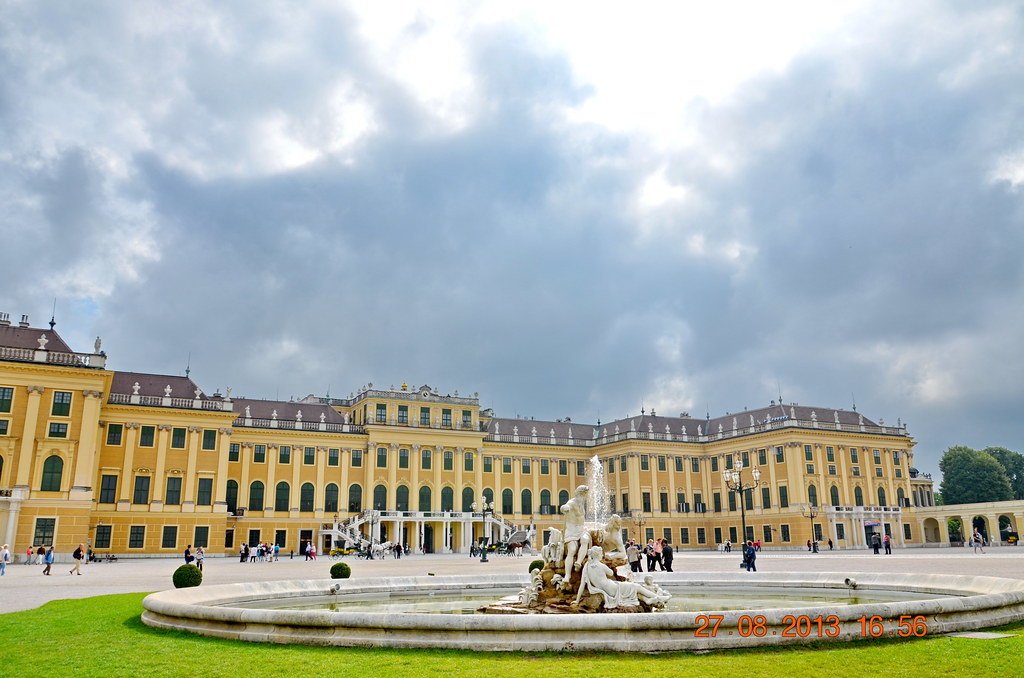 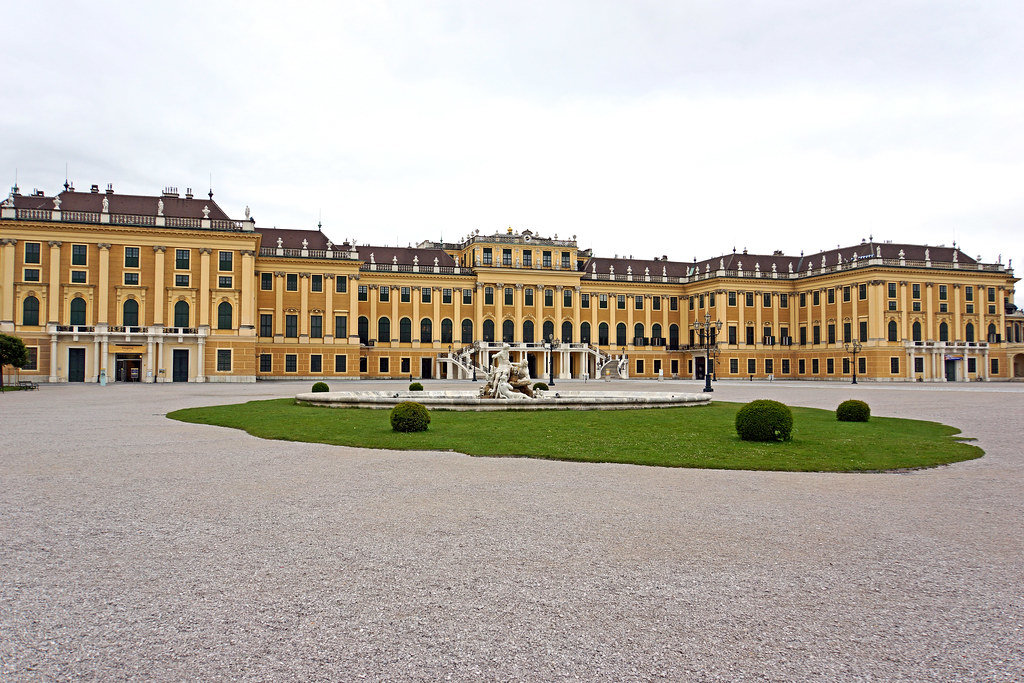