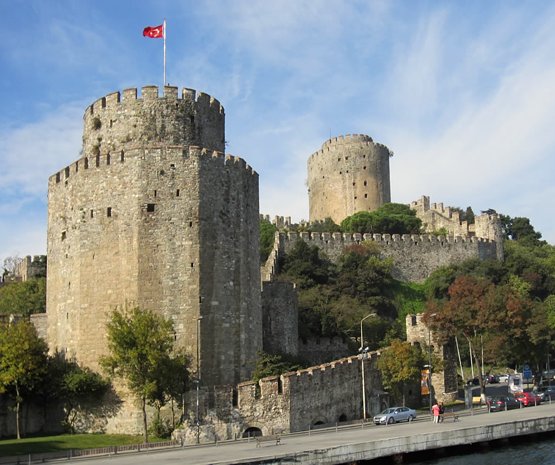 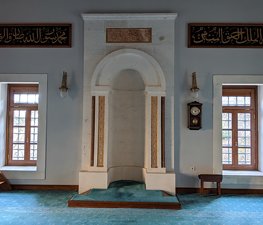 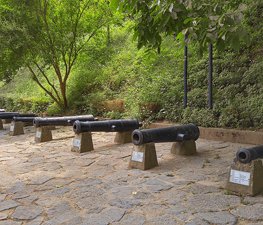 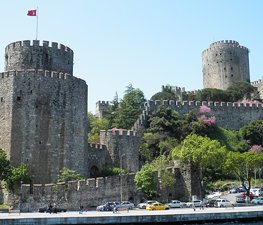 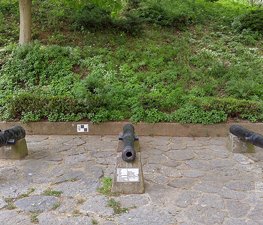 Rumelihisarı (Rumelian Castle) is a fortress located in Istanbul, Turkey, on a hill at the European side of the Bosporus just north of the Bebek district; giving the name of the quarter around it. It was built by the Ottoman Sultan Mehmed II between 1451 and 1452, before he conquered Constantinople. The three great towers were named after three of Mehmed II's viziers, Sadrazam Çandarlı Halil Pasha, who built the big tower next to the gate, Zağanos Pasha, who built the south tower, and Sarıca Pasha, who built the north tower.

Rumelihisarı is situated at the narrowest point with 660 meters of the Bosporus strait, just opposite of the Anadoluhisarı on the Anatolian side, another Ottoman fortress which was built between 1393 and 1394 by Sultan Bayezid I. The place was chosen to prevent aid from the Black Sea reaching Constantinople during the Turkish siege of the city in 1453, particularly from the Genoese colonies such as Caffa, Sinop and Amasra. In a previous Ottoman attempt to conquer the city, Sultan Murad II (1404-1451) encountered difficulties due to a blockade of the Bosporous by the Byzantine fleet. The necessity of a fortress opposite of Anadoluhisarı was thus well known to the Ottomans. At this place, there was a Roman fortification in the past, which was used as a prison by the Byzantine and Genoese. Later on, a monastery was built here.

In preparation for the conquest of Constantinople, Sultan Mehmed II (1432-1481), son of Murad II, started to realize the construction of the fortress immediately following his second ascent to the throne in 1451. He refused the plea for peace of the Byzantine Emperor Constantine XI (1404-1453), who understood the intention of the Sultan. The construction began on April 15, 1452. Each one of the three main towers were named after the Pashas who supervised their construction, which were later named after them. The Sultan personally inspected the activities on the site. With the help of thousands of masons and workers, the fortress was completed in a record time of 4 months and 16 days on August 31, 1452.

The Rumelihisarı fortification has one small tower, three main towers, and thirteen small watchtowers placed on the walls connecting the main towers. One watchtower is in the form of a quadratic prism, six watchtowers are shaped as prisms with multiple corners and six others are cylindrical. The main tower in the north, the Saruca Pasha Tower, is in cylindrical form with its 9 stories and height of 28 meters, has a diameter of 23.30 meters and its walls are 7 meters thick. Today, this tower is called the Fatih (Conqueror) Tower after Sultan Mehmed II. Halil Pasha Tower, a dodecagon prism, which stands at the waterfront in the middle of the fortress, has also 9 stories. It is 22 meters high with a 23.30 meters diameter and the walls are 6.50 meters thick. The main tower in the south, the Zağanos Pasha Tower, has only 8 stories. The cylindrical tower is 21 meters high, has a 26.70 meters diameter with 5.70 meters thick walls. The space within each tower was divided up with wooden floors, each equipped with a furnace. Conical wooden roofs covered with lead crowned the towers. The outer curtain walls of the fortress are from north to south 250 meters long and from east to west varying between 50 meters and 125 meters long. Its total area is 31,250 m2.

The fortress had three main gates next to the main towers, one side gate and two secret gates for the arsenal and food cellars next to the southern tower. There were wooden houses for the soldiers and a small mosque, endowed by the Sultan at the time of construction. Only the minaret shaft remains of the original mosque, while the small masjid added in the mid-16th century has not survived. Water was supplied to the fortress from a large cistern underneath the mosque and distributed through three wall-fountains, of which only one has remained. Two inscriptive plaques are found attached on the walls.

The fortress, designed by architect Müslihiddin, was initially called "Boğazkesen", literally meaning "The Strait Cutter", referring to the Bosporus Strait. The name carries a secondary and more macabre meaning; as boğaz not only means strait but also "throat" in Turkish.

It was later renamed as Rumelihisarı, which means "Fortress on the Land of the Romans", i.e. Byzantine Europe, or the Balkan peninsula.

Usage in the past

A battalion of 400 Janissaries were stationed in the fortress, and large cannons were placed in the Halil Pasha Tower, the main tower on the waterfront. A Venetian ship coming from the Black Sea which ignored the order to halt by the commander of the fortress, Firuz Ağa, was bombarded and sunk, and its surviving crewmen were impaled as a warning to any who might attempt the same. These cannons were later used until the second half of the 19th century to greet the sultan when he passed by sea.

After the fall of Constantinople, the fortress served as a customs checkpoint. Rumelihisarı, which was designated to control the passage of ships through the strait, eventually lost its strategic importance when a second pair of fortresses was built further up the Bosphorus, where the strait meets the Black Sea. In the 17th century, it was used as a prison, primarily for foreign prisoners of war. Rumelihisarı was partly destroyed by an earthquake in 1509, but was repaired soon after. In 1746, a fire destroyed all the wooden parts in two of the main towers. The fortress was repaired by Sultan Selim III (1761-1807). However, a new residential neighborhood was formed inside the fortress after it was abandoned in the 19th century.

In 1953, on the orders of President Celal Bayar, the inhabitants were relocated and extensive restoration work began on May 16, 1955, which lasted until May 29, 1958. Since 1960 Rumelihisarı has been a museum and an open-air theater for various concerts at festivals during the summer months.

The Fatih Sultan Mehmet Bridge which spans the Bosporus is located close to the fortress, to the north.

Rumelihisarı is open to public every day except Wednesdays from 9:00 to 16:30.

Cem Perin
Cool views of the city and nothing else. Research the history beforehand since this is not a museum but a barren fortress. The mosque at the amphitheater is a clear allegory to Turkey’s current state.

Martin Angeletti
The views are amazing. Just let yourself wander from stairs to towers, and towers, and stairs. Get instant gratification with each step. Follow your instincts and keep finding better & better views.

Foodie
One of the most impressive attractions in Istanbul of great hist.importance. Must visit. You can climb around and get nice views, but are not allowed to climb the towers. There is a toilet inside.

Gonzalo Arenas
Check out this amazing book covering the siege of Constantinople and the purpose of why this fortress was built: http://www.amazon.com/1453-Holy-Constantinople-Clash-Islam/dp/1401308503/ref=pd_sim_b_1

Amal Alhartani
Nice view! I like the castle history. But I thought that i can go to the top but we couldn’t ???? it’s not allowed.

M. B.
There's nothing much to do, but somehow enjoyed spending time there and enjoyed the view
Load more comments
foursquare.com
9.2/10
Roman Ryzhikov, Hümeyra Akyıldız and 177,844 more people have been here
I've been here
Add to wishlist

Adile Sultan Palace is a former royal residence, which was used later

Fort Scratchley was a coastal defence installation at Newcastle, New

Ruthven Barracks near Ruthven, Highland in Scotland are the smallest 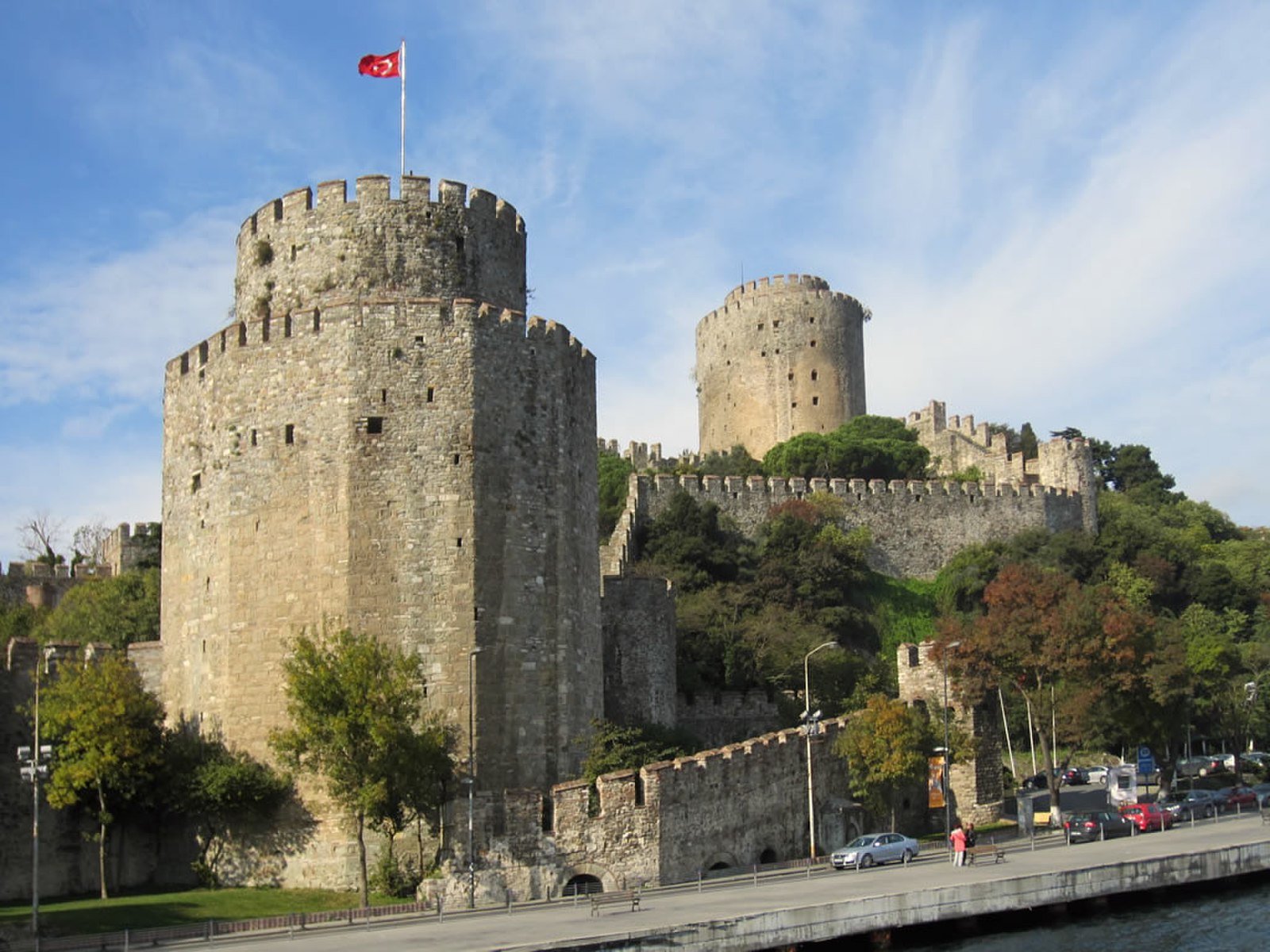 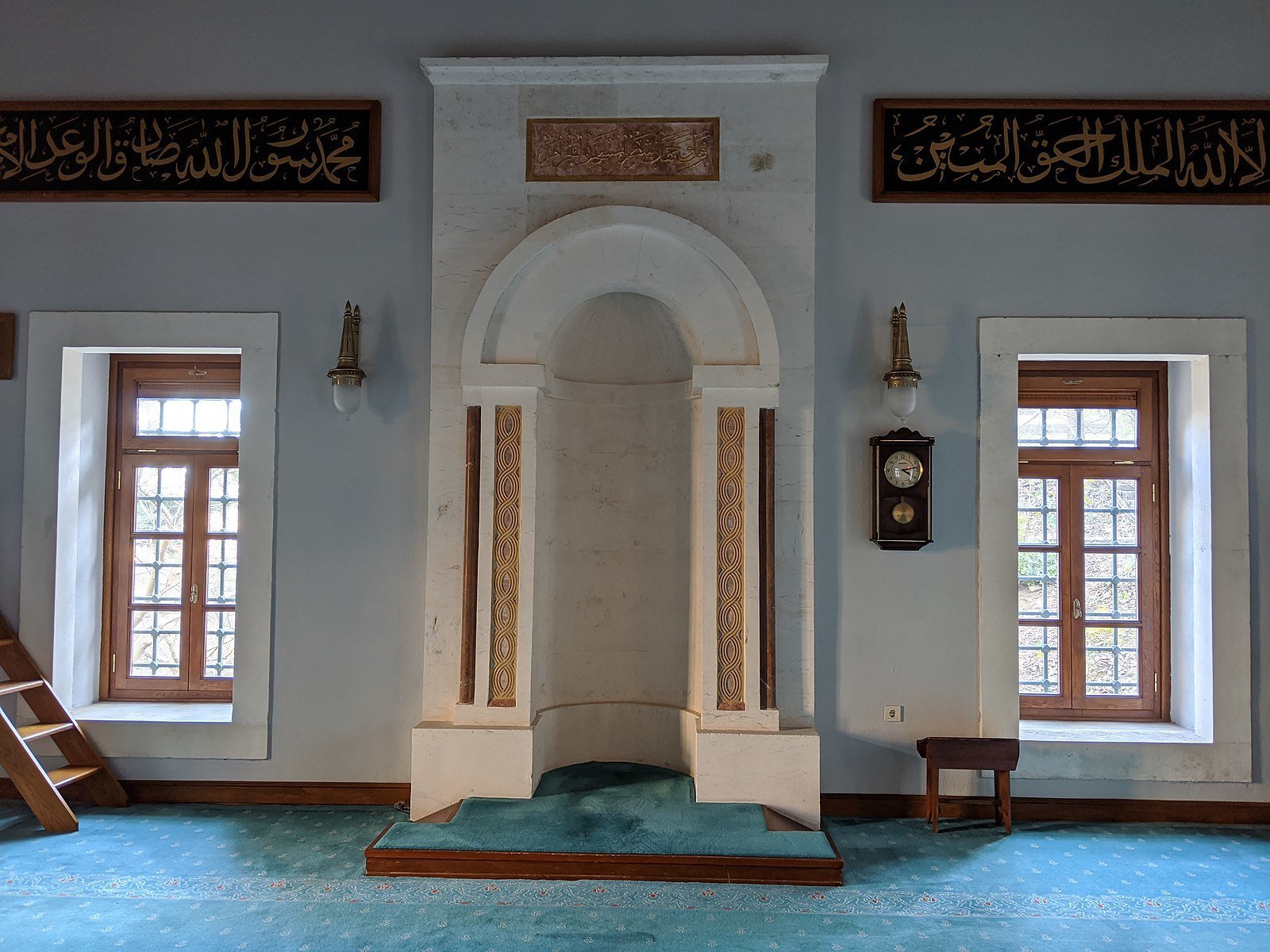 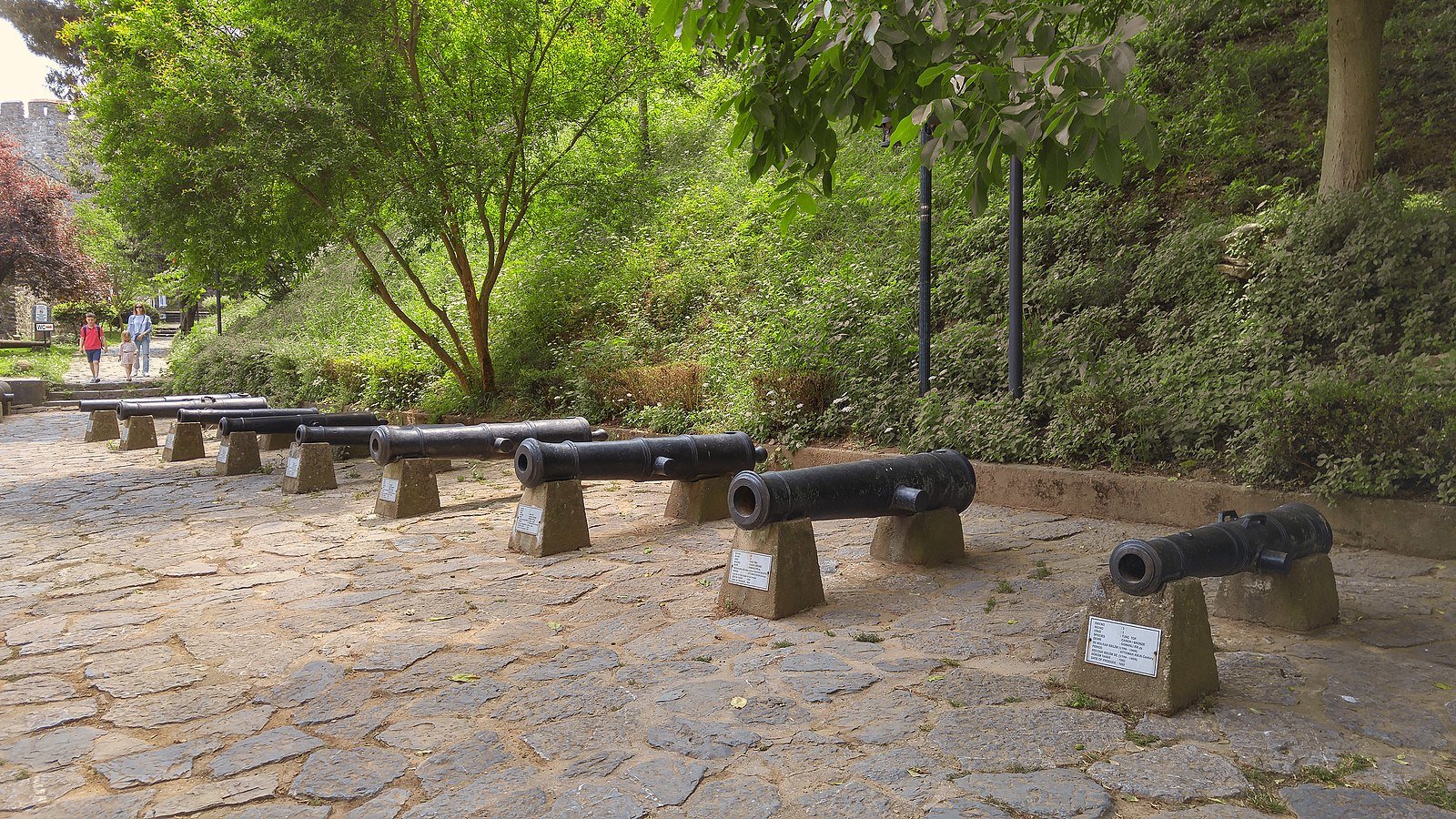 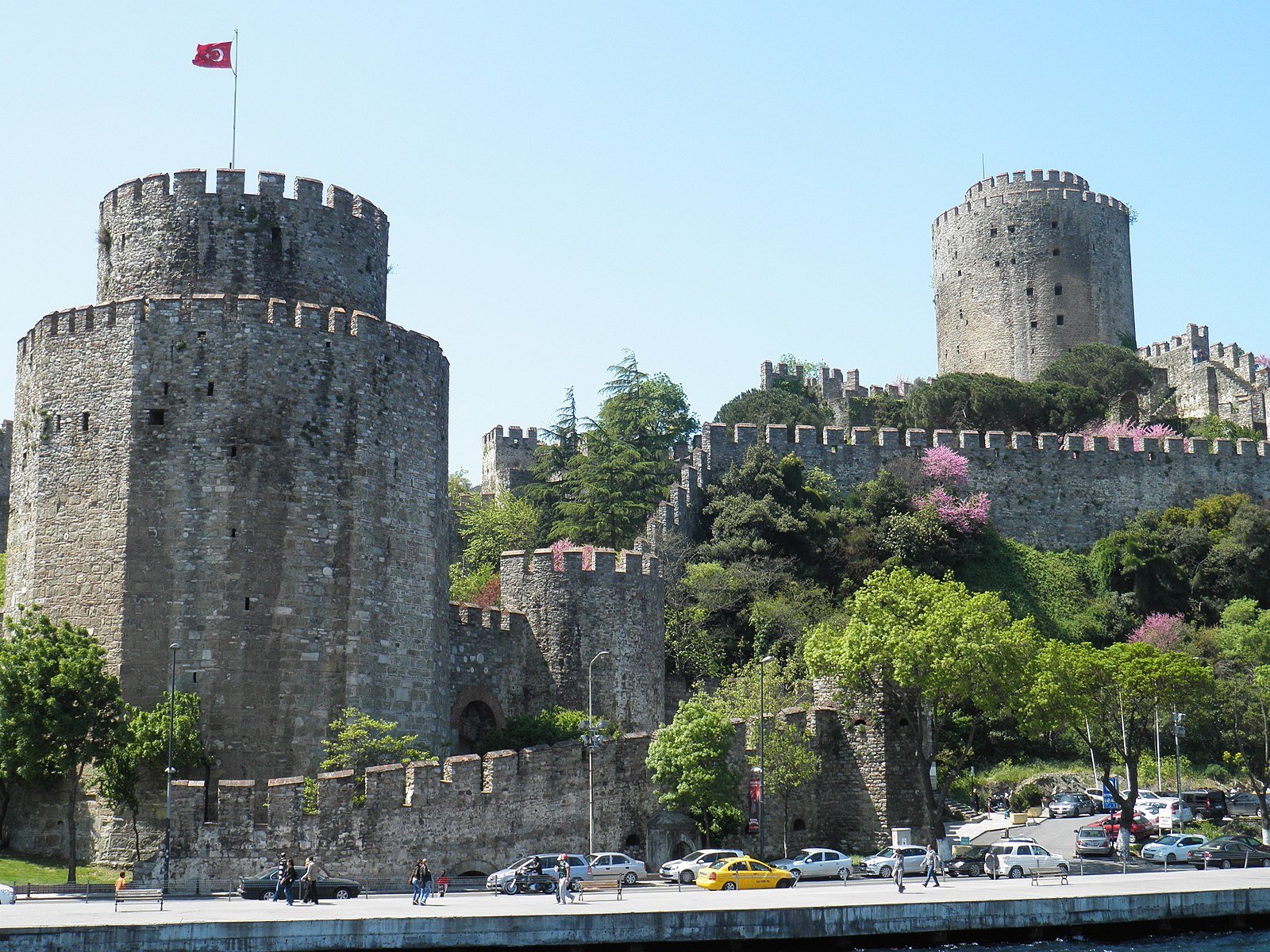 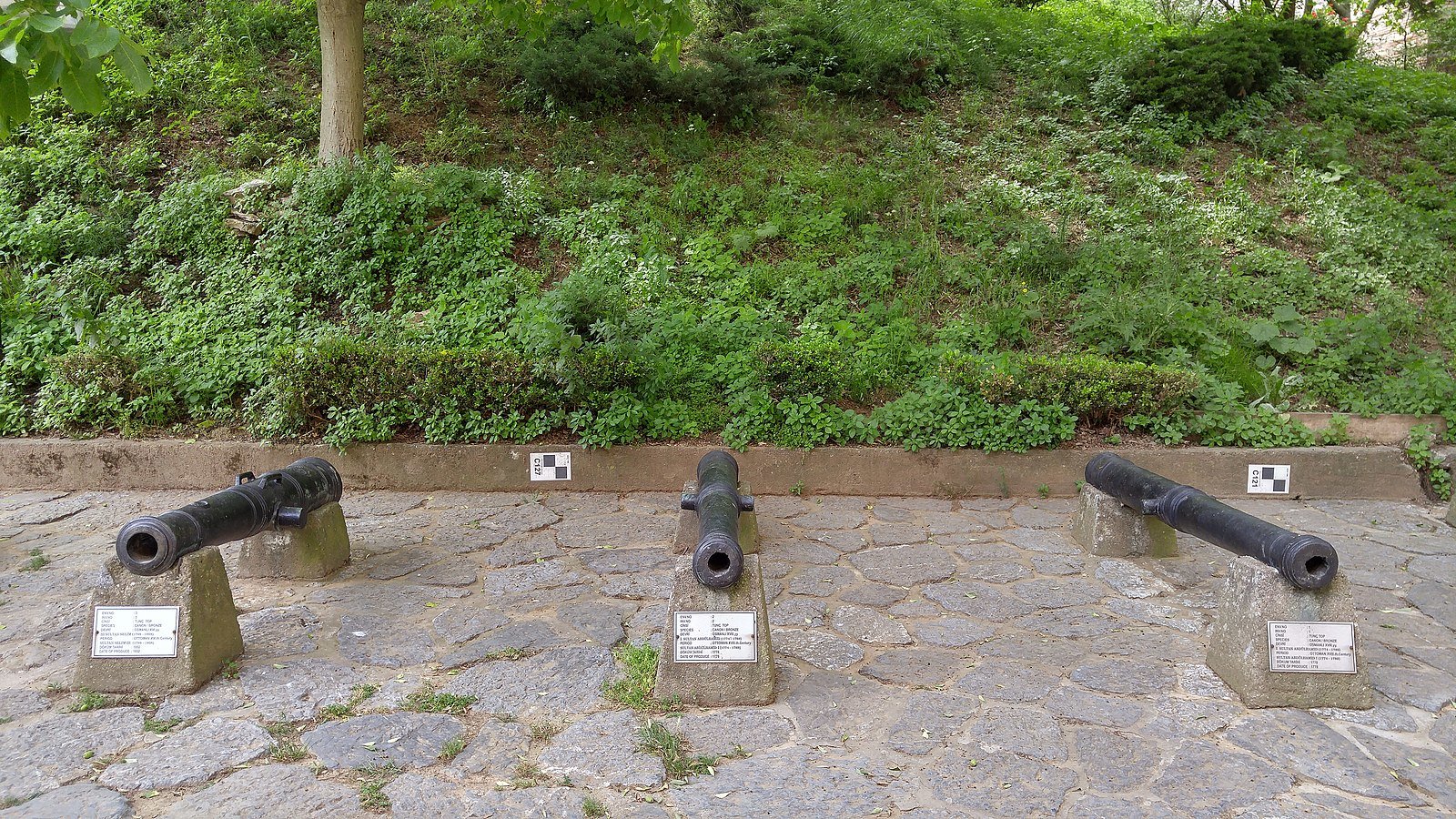 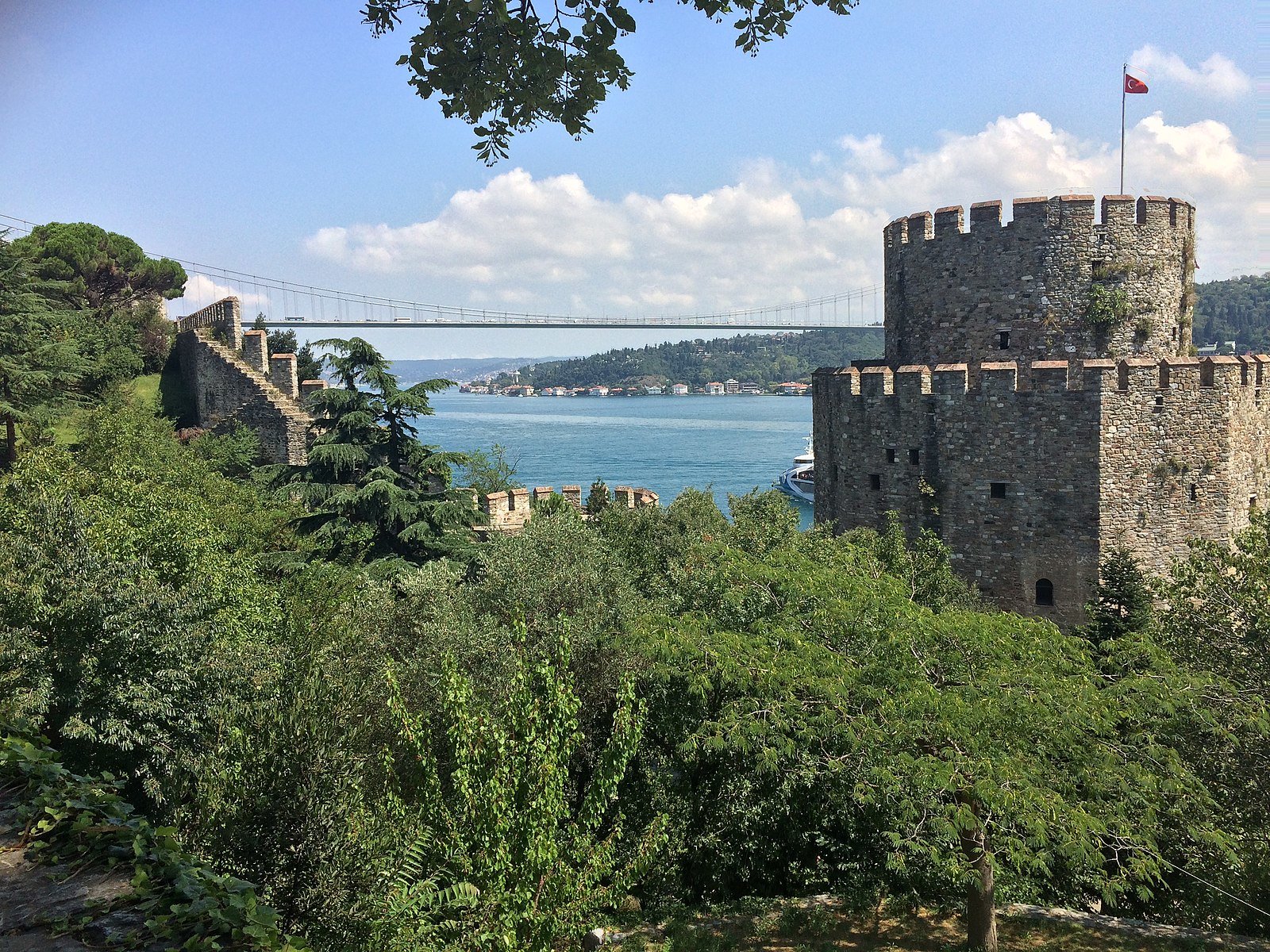 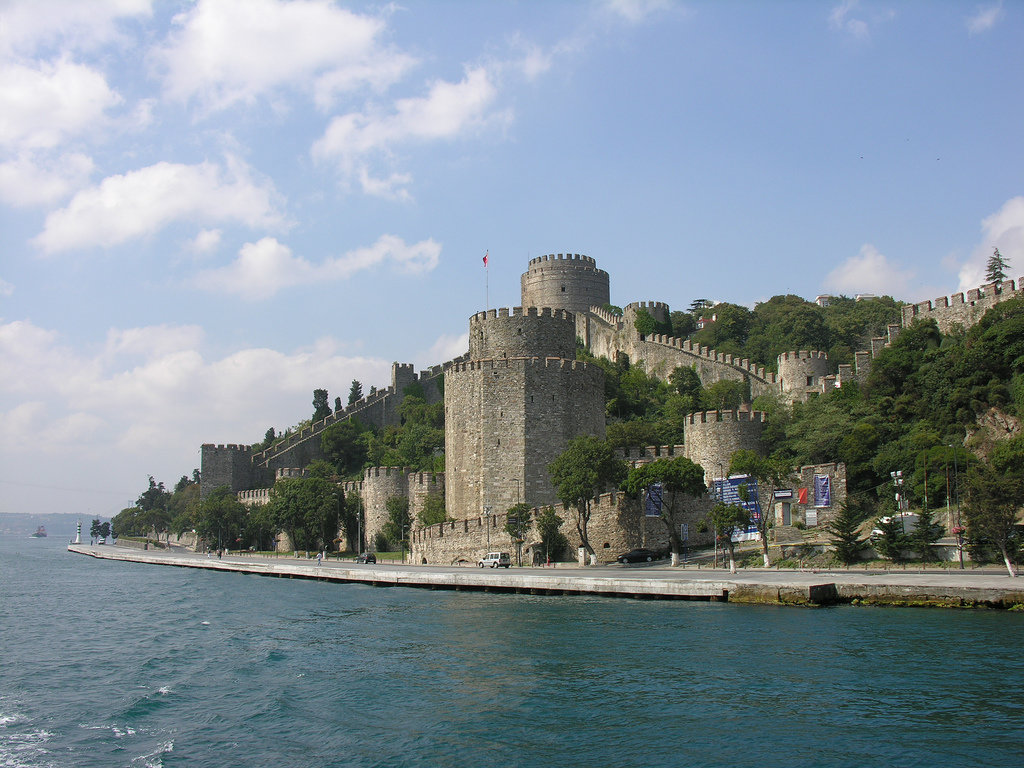 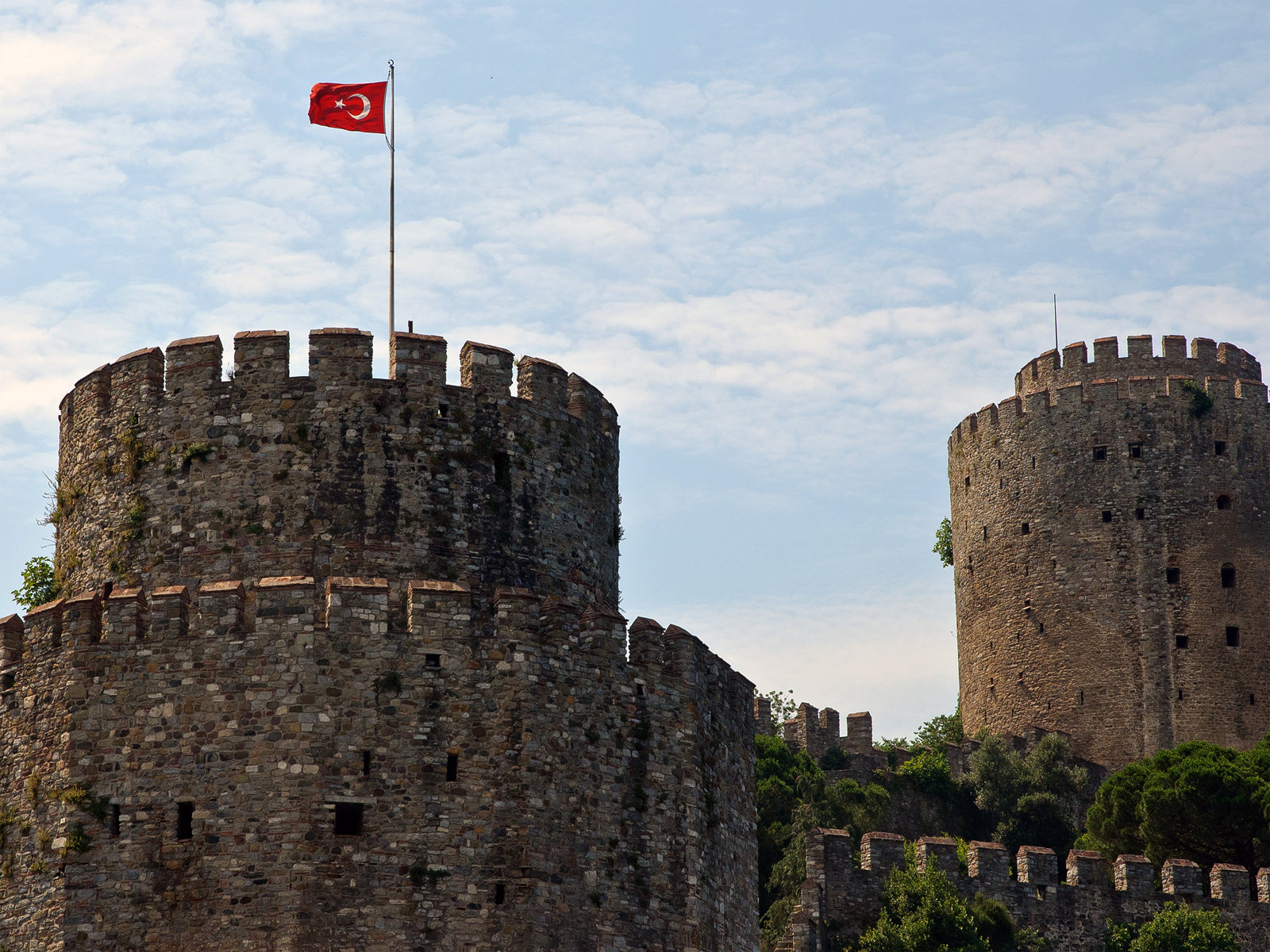 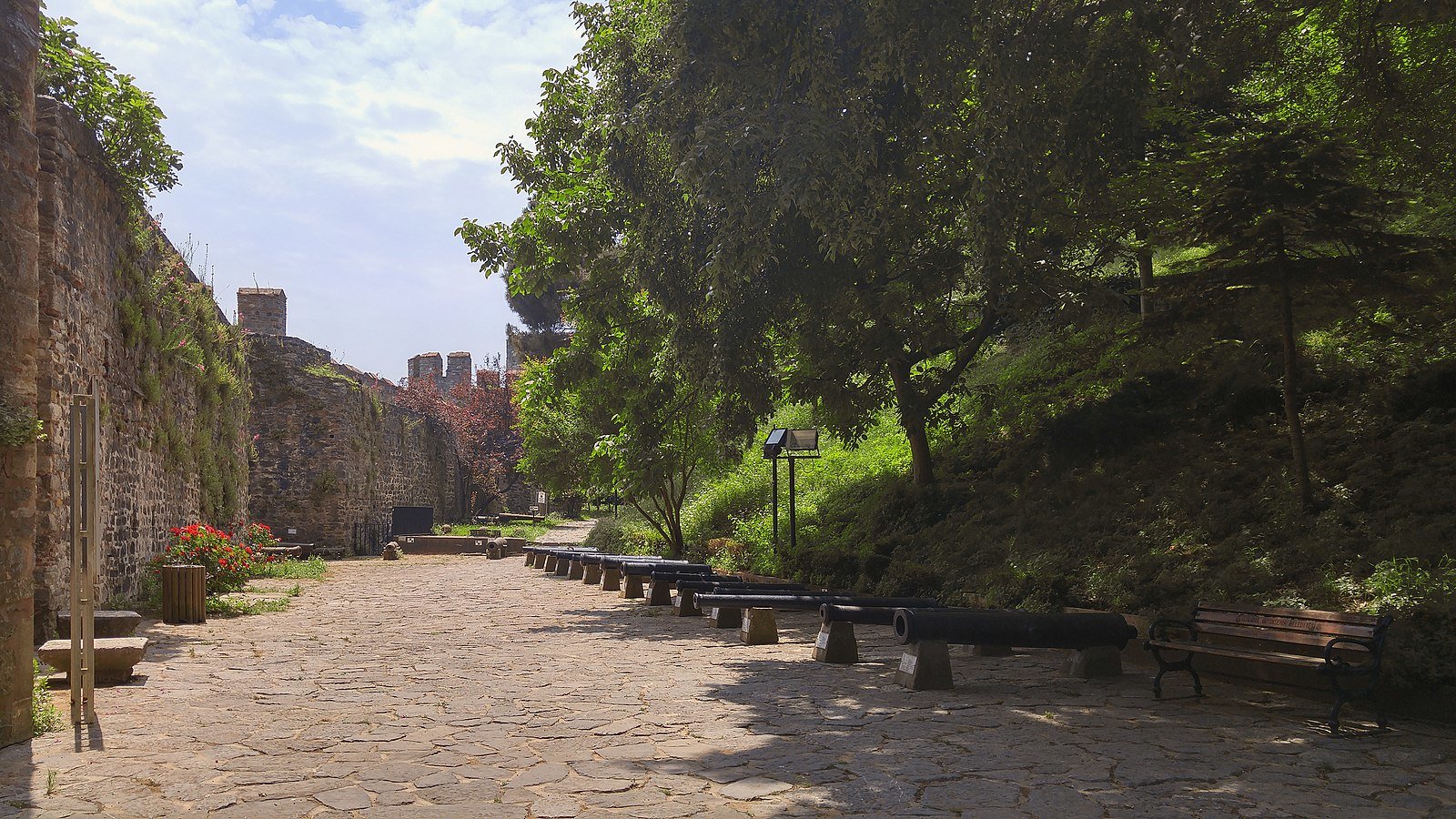 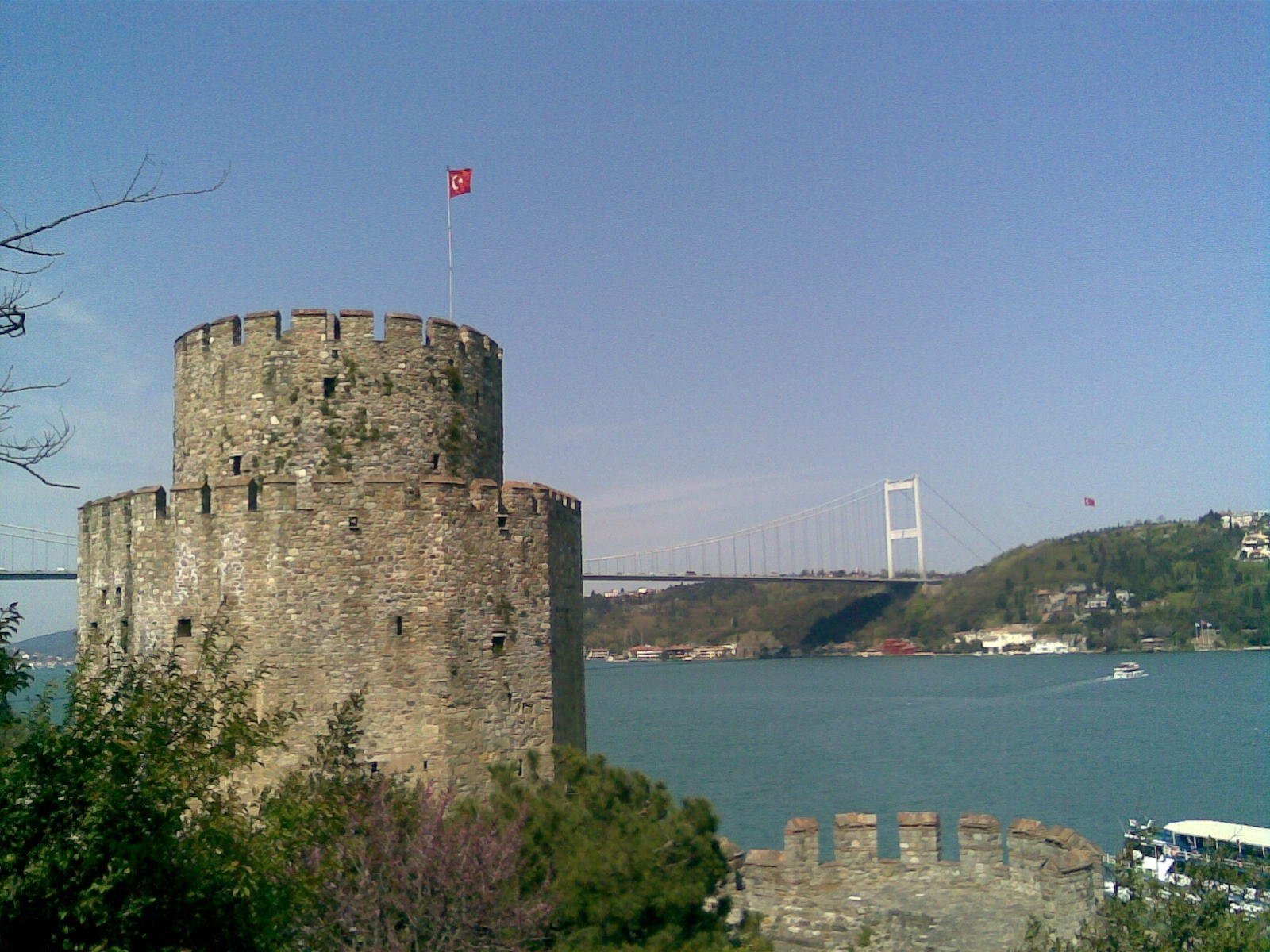 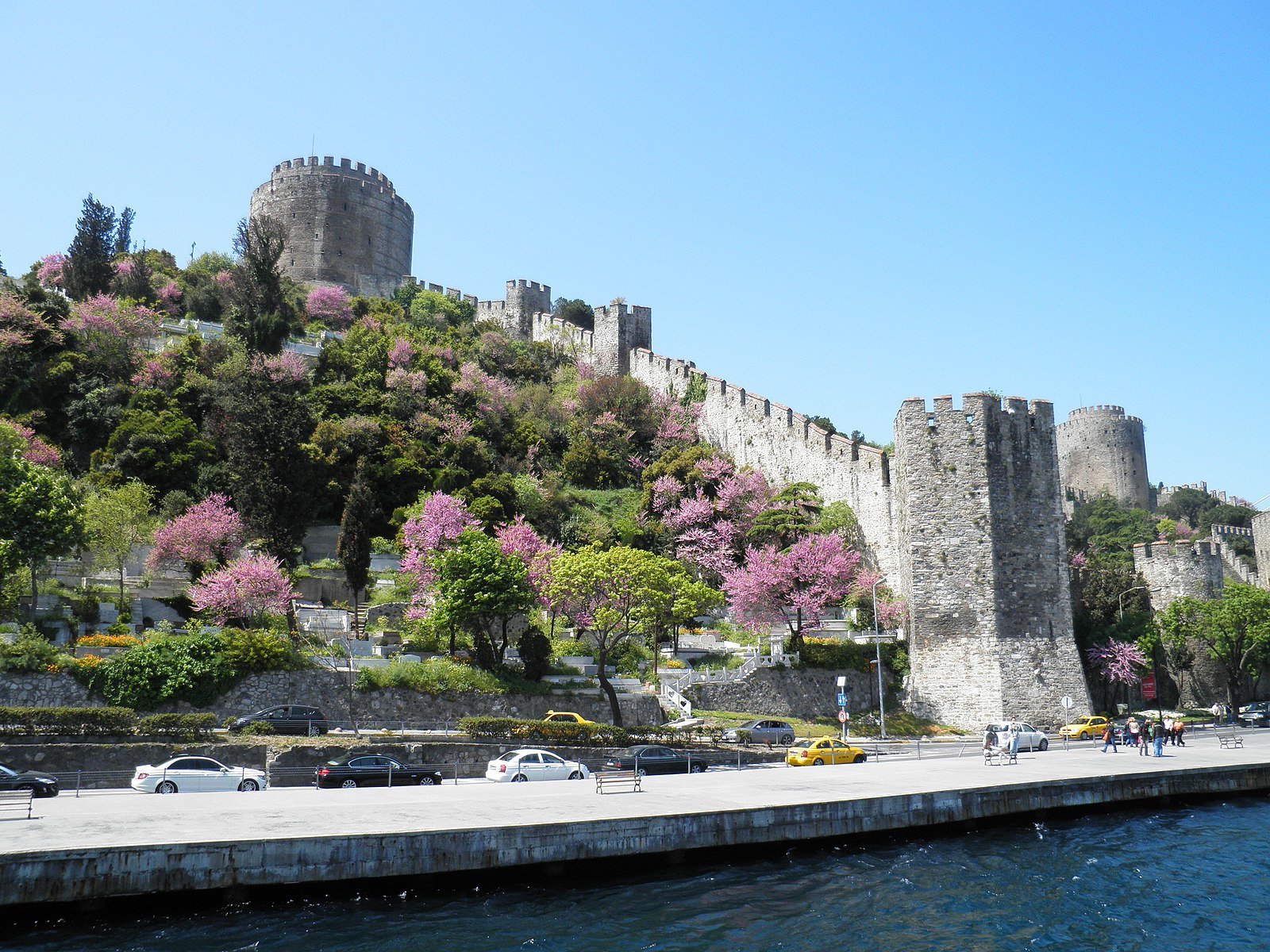 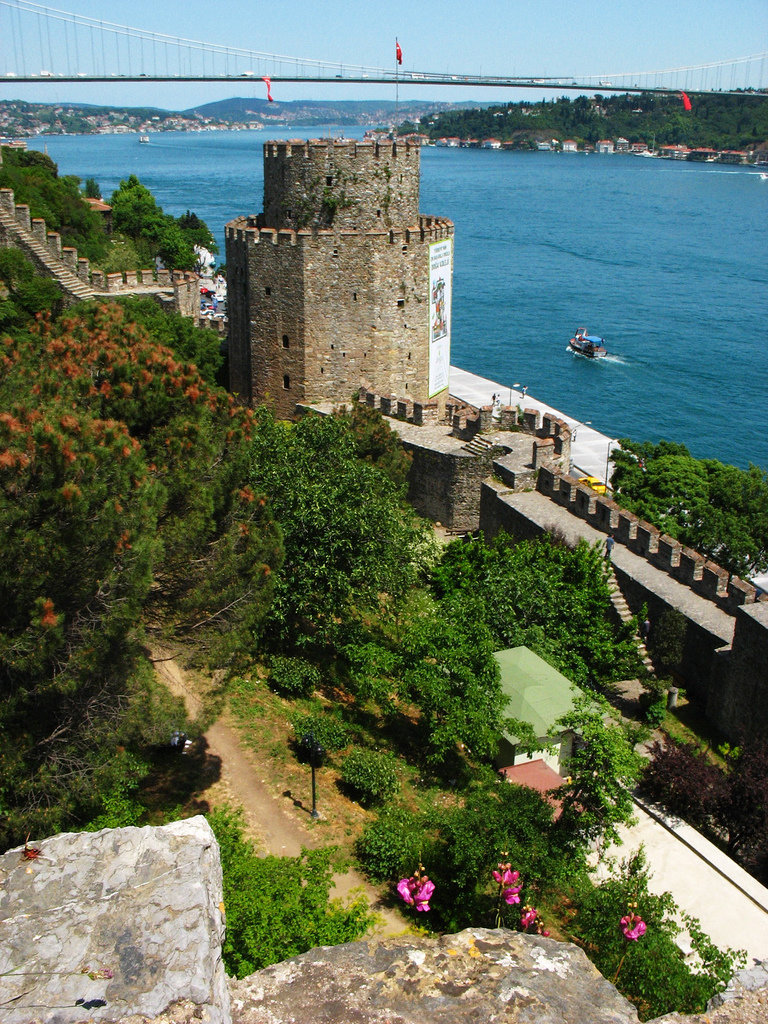 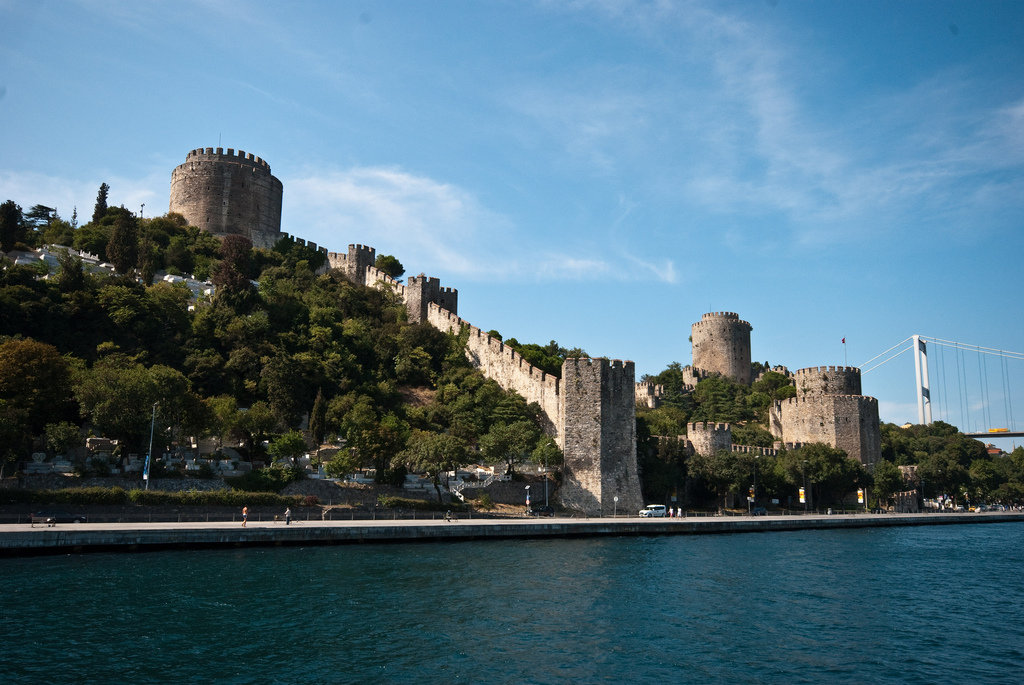 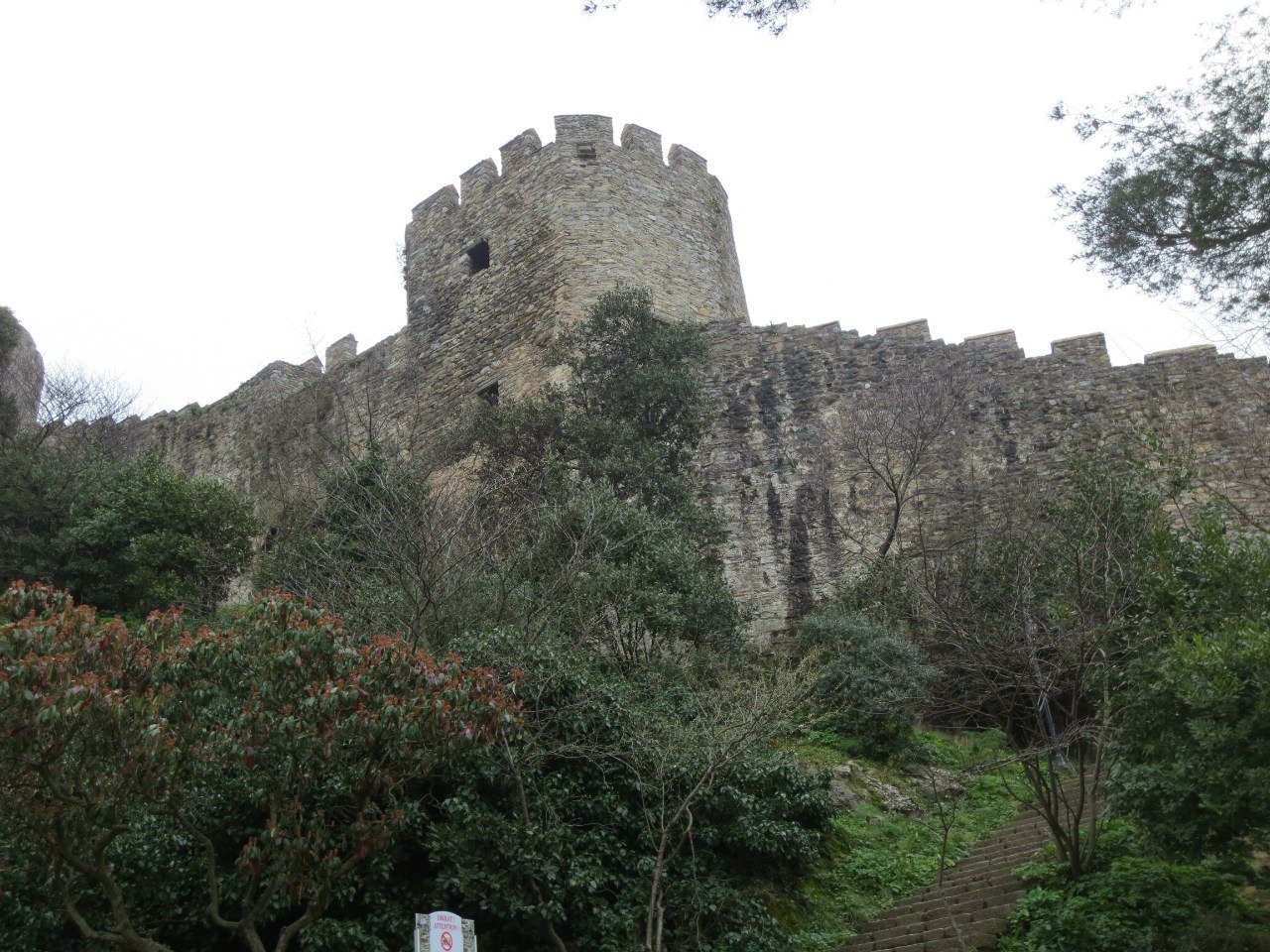 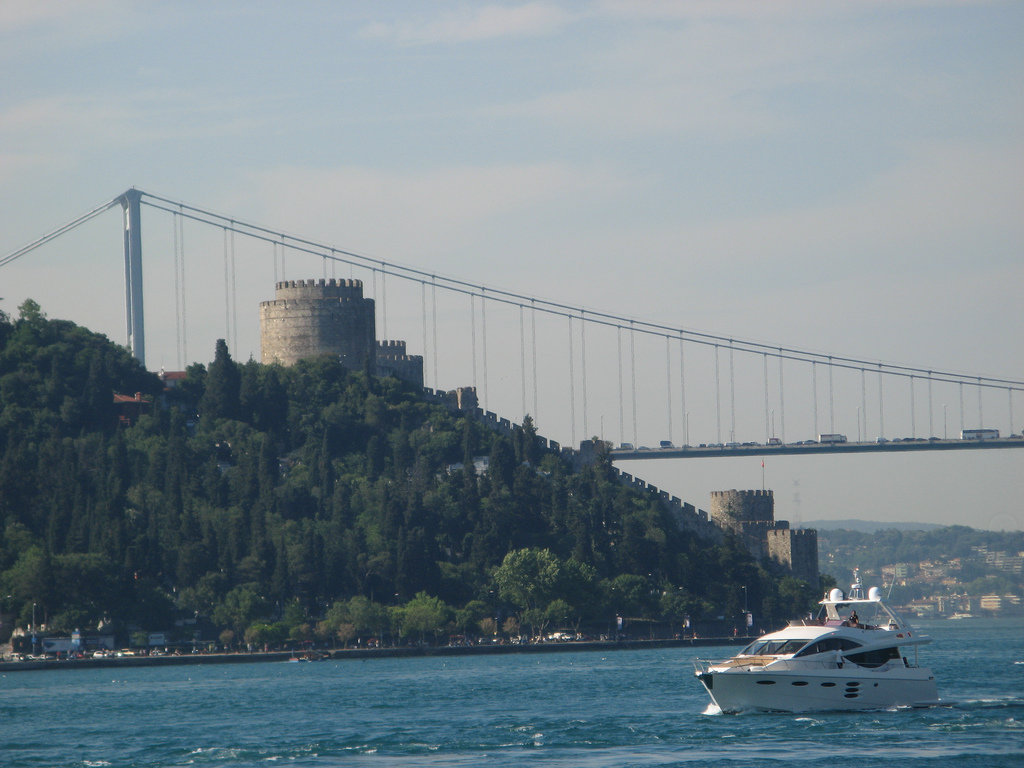 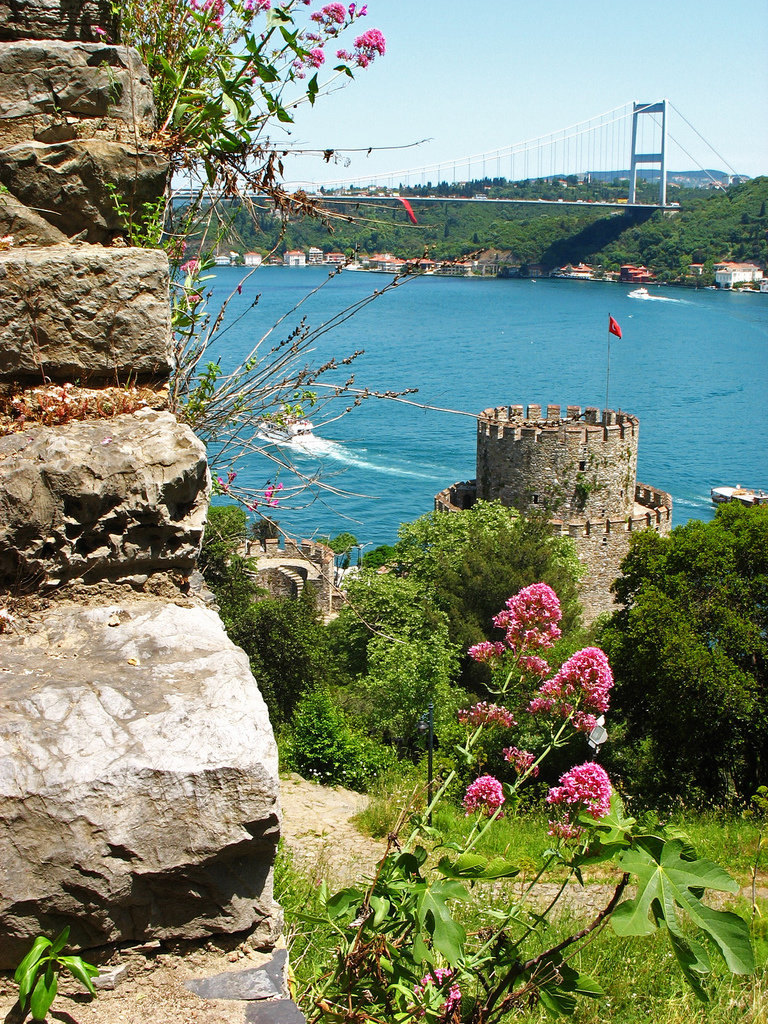 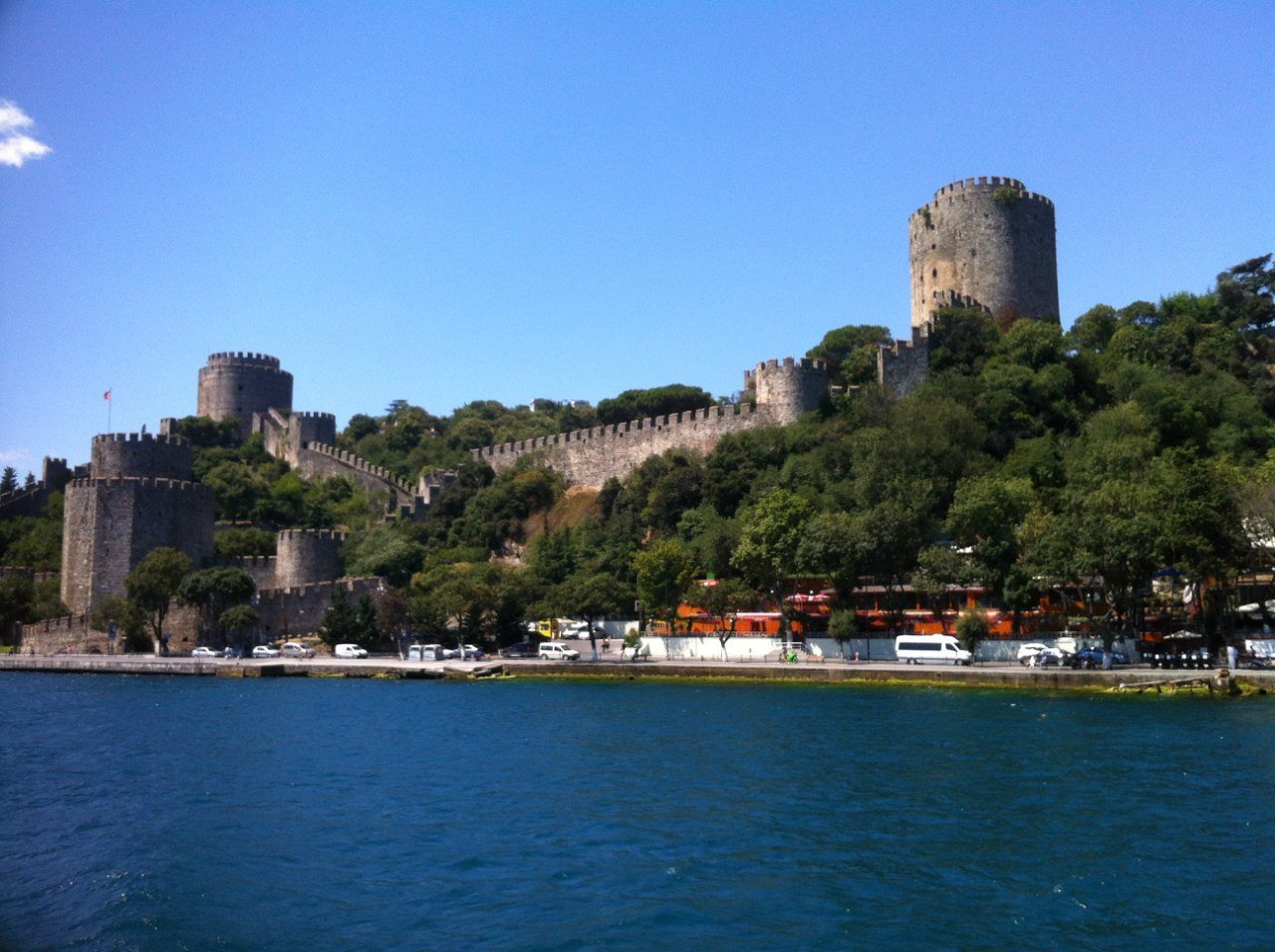 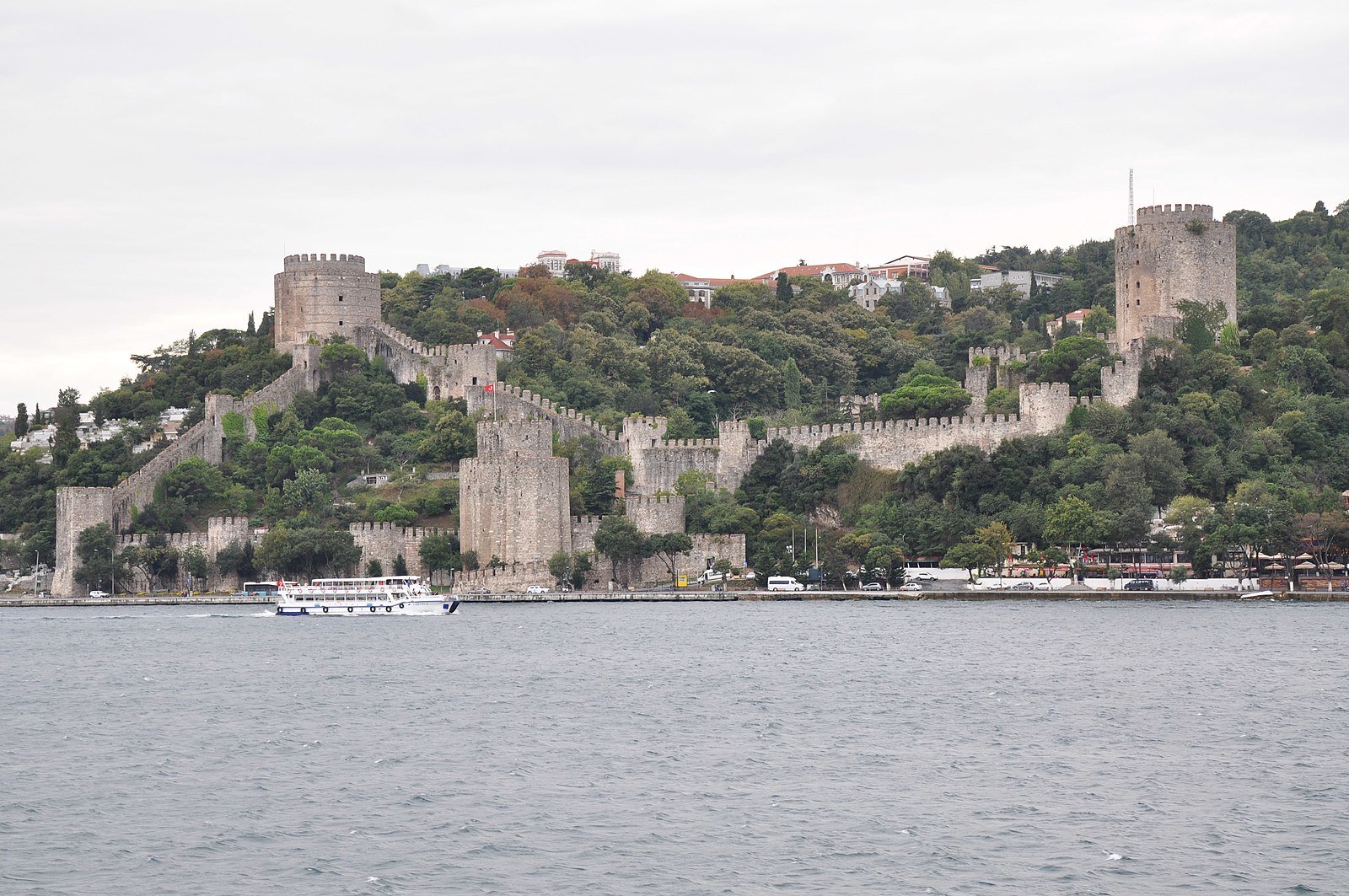 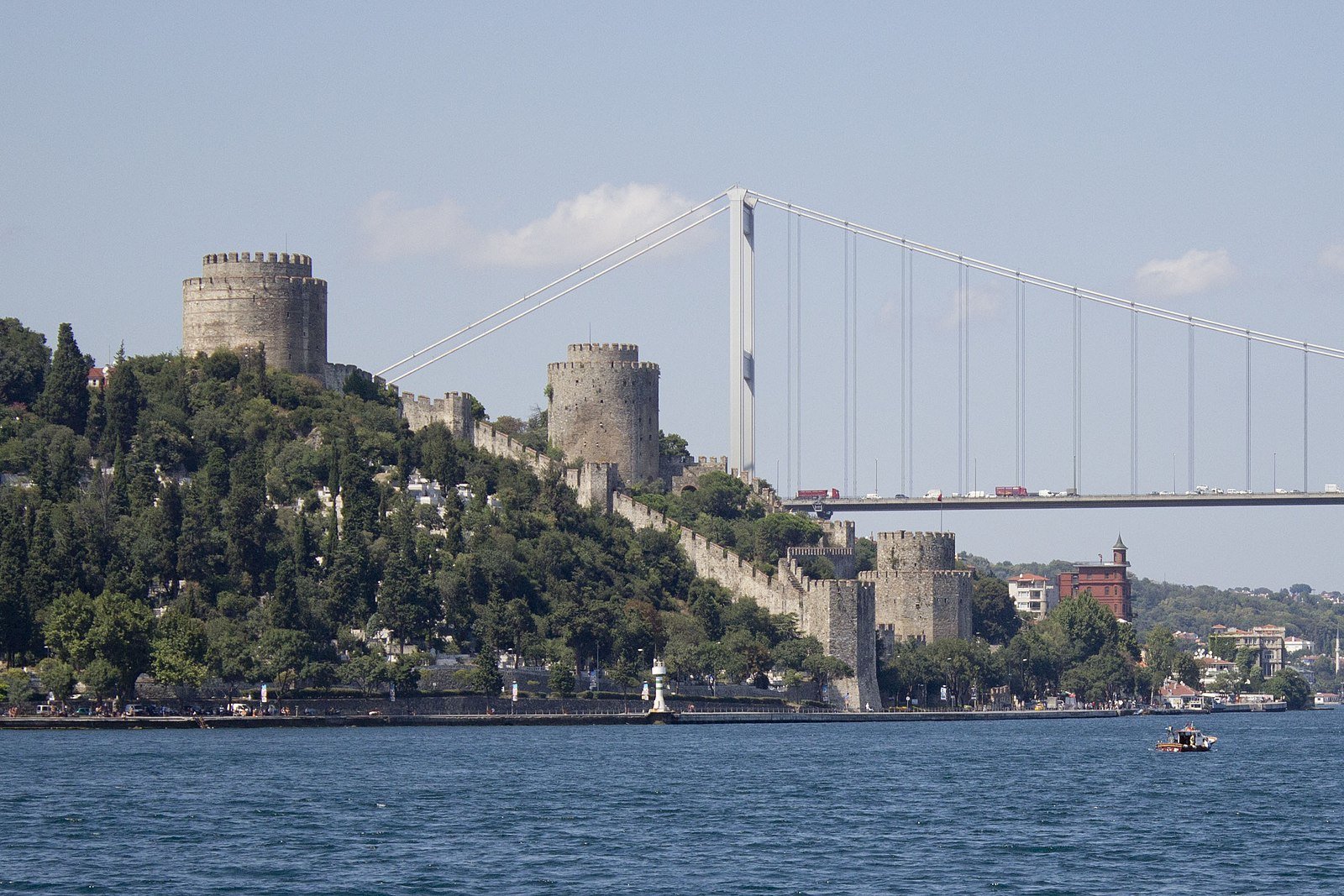 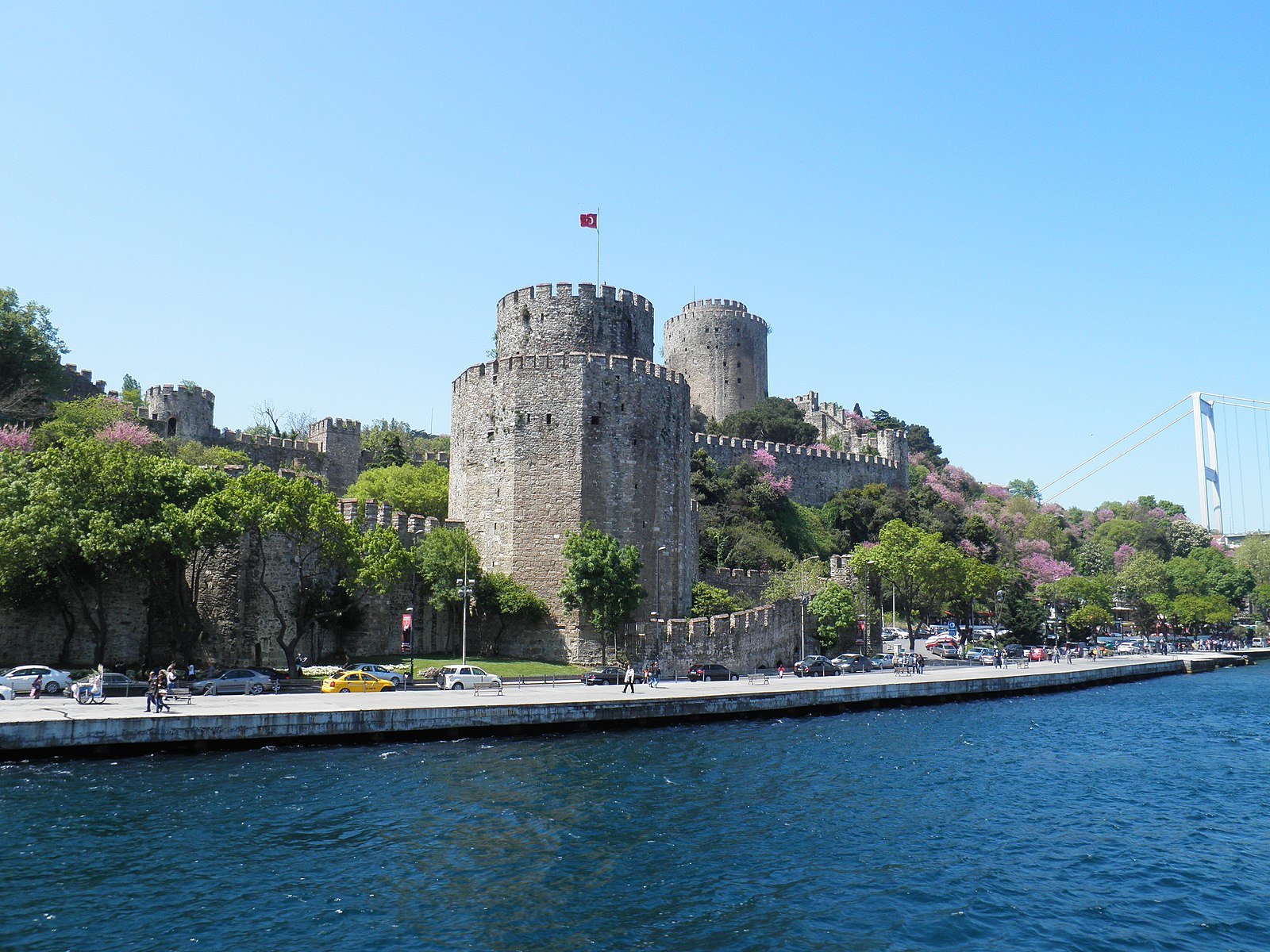 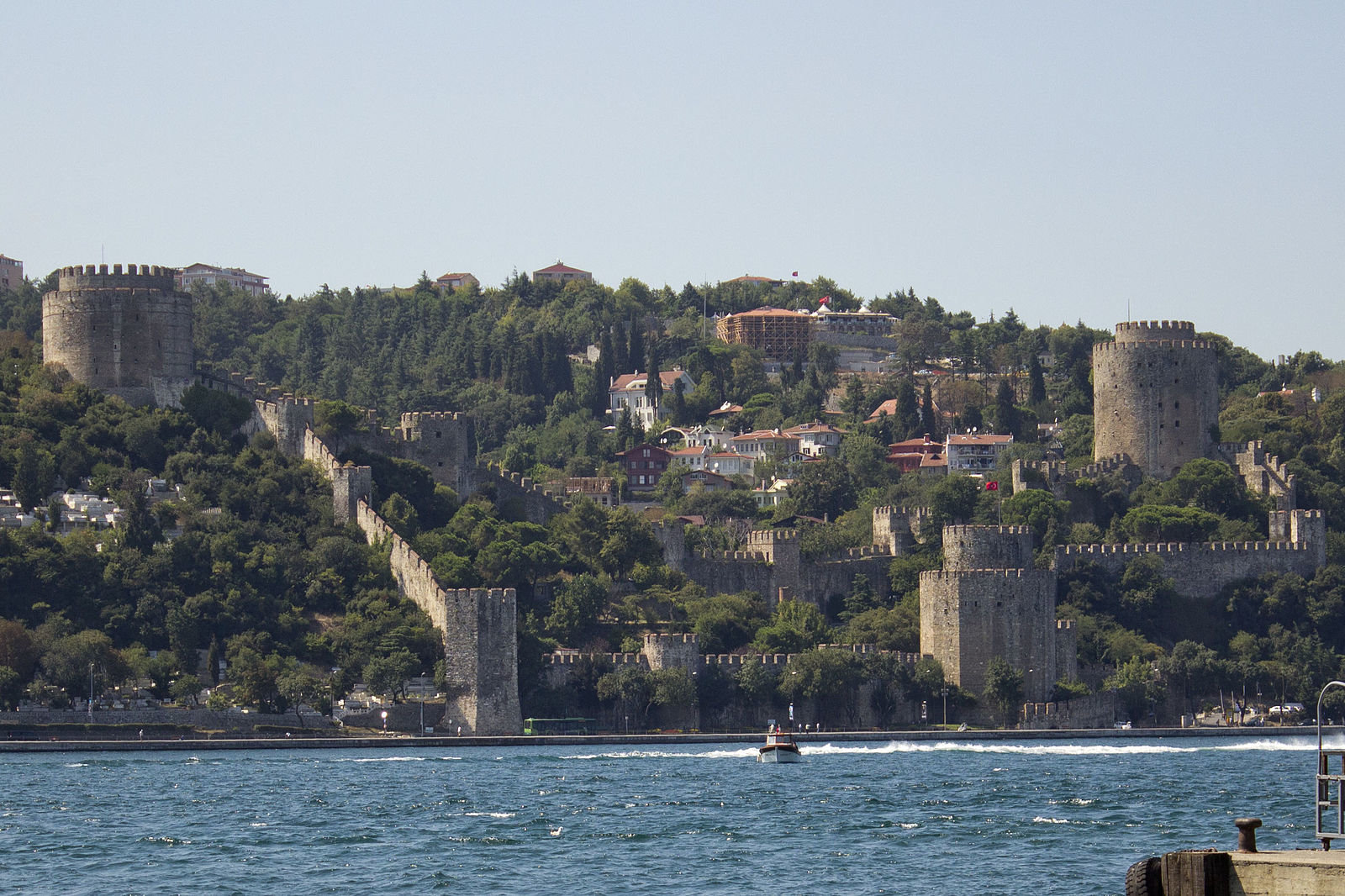