×
What are you looking for?
See all results
Stairways in Philadelphia 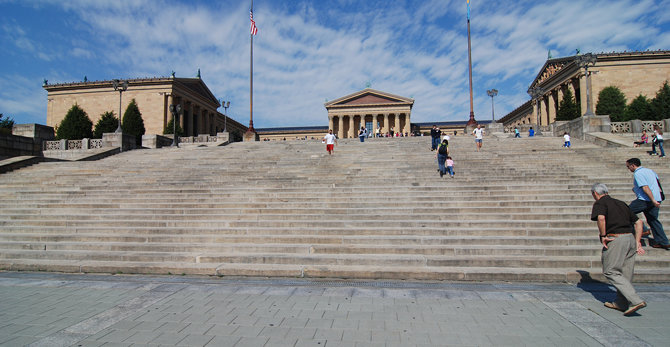 The 72 front steps of the Philadelphia Museum of Art in Philadelphia, Pennsylvania have become known as the "Rocky Steps" as a result of their appearance in the three-Oscar-winning film Rocky, and four of its sequels, II, III, V and Rocky Balboa, in which the eponymous character runs up the steps to the song "Gonna Fly Now". Tourists and local residents often mimic Rocky's famous climb, a metaphor for an underdog or an everyman rising to a challenge. A bronze statue of Rocky was briefly placed at the top of the steps for the filming of Rocky III.

The top of the steps offers a commanding view of Eakins Oval, the Benjamin Franklin Parkway and Philadelphia City Hall.

In 2006, Rocky creator Sylvester Stallone recounted the genesis of the iconic scene. The film crew, bound to a tight budget, first identified the steps one night while looking for shooting locations around the city. Stallone first thought Rocky should carry his dog Butkus up the steps, but the dog proved too heavy for the scene to work. Still, the view from the top of the stairs convinced him to reshoot the scene without the dog. In Rocky Balboa, Rocky lifts his dog Punchy when he reaches the top of the steps.

This scene was one of the first major uses of the Steadicam, a stabilized camera mount that allows the camera operator to walk and navigate steps while filming.

Participants in Philadelphia's monthly Critical Mass bike ride generally end the ride by cycling to the Rocky Steps, picking up their bicycles, running up the steps, then lifting their bikes above their heads.

The scene has become a cultural icon. E! Channel ranked it No. 13 in its 101 Most Awesome Moments in Entertainment. During the 1996 Olympic Torch Relay, Philadelphia native Dawn Staley was chosen to run up the museum steps. The scene is also frequently parodied by the media; in The Simpsons episode "I'm Spelling as Fast as I Can," Lisa Simpson runs up a flight of stairs wearing a tracksuit like Rocky's, while in the film In Her Shoes, Toni Collette's character, Rose Feller, runs up the steps with four dogs. On an episode of The Fresh Prince of Bel Air the character Will, while back in Philly, trains for a big fight against a former childhood bully. The training ends with Will running up the steps to "Gonna Fly Now", and celebrating and passing out, where a passer-by steals his wallet and hat. In the Eddie Murphy movie The Nutty Professor, Sherman Klump runs up the steps to one of his college's buildings, parodying the scene. Also, the closing credits of the 2006 movie Rocky Balboa showed various people running up the steps.

Bam Margera and Brandon DiCamillo parodied the scene to a cover of the song "Eye of the Tiger".

In a Reebok campaign, Allen Iverson, then with the Philadelphia 76ers, runs up the steps while dribbling a basketball. Other programs such as Viva Pinata, and Hey Arnold! have also parodied it.

In 2004, Presidential candidate John Kerry ended his pre-convention campaign at the foot of the steps before going to Boston to accept his party's nomination for President.

In the opening episode of the 2005 boxing reality television series The Contender (which featured and was executive produced by Stallone), Philadelphia native Najai Turpin ran up the steps.

The steps are the backdrop for the annual Independence Day celebration, and are often featured in mass concerts such as Live 8.

Two journalists from the Philadelphia Inquirer spent a year interviewing people who ran the steps, and published a book called Rocky Stories: Tales of Love, Hope, and Happiness at America's Most Famous Steps in 1996.

Before Rocky III, released in 1982, Sylvester Stallone commissioned A. Thomas Schomberg to create a bronze statue of Rocky. Three 2-ton, 10-foot copies were cast. One was installed atop the steps for the filming of Rocky III. Another was listed on eBay with a starting bid of US$5,000,000 to raise funds for the International Institute for Sport and Olympic History, but has failed to sell at that price or several times since at $1 million.

After filming was complete, a debate erupted in Philadelphia between the Art Museum and the City's Art Commission over the meaning of "art." City officials, who argued that the statue was not "art" but a "movie prop," eventually moved it to the front of the Wachovia Spectrum in South Philadelphia.

It was later returned to the Art Museum for the filming of Rocky V, Mannequin and Philadelphia, then brought back to the Spectrum. The statue was replaced with a simple set of Converse sneaker footprints with words reading "Rocky" above them.

On September 8, 2006, the Rocky statue was returned again to the Art Museum and placed on a pedestal in a grassy area near the foot of the steps to the right of the Museum. The unveiling ceremony included live music, the debut of the first full trailer for Rocky Balboa, and a free showing of the first Rocky movie. At the ceremony, Mayor John Street said that the steps were one of Philly's biggest tourist attractions, and that Stallone, a native New Yorker, had been gladly adopted by Philadelphia.

In Rocky Balboa, when Rocky told Paulie that he is going to make a come back, Paulie suggested "You mad because they took down your statue?" which Rocky denied.

Laura M
Downloaded the theme song on my phone and had it playing as we ran up the stairs. So fun!

Patrick K
If rocky didn't run up the stairs I don't think anyone would now
Load more comments
foursquare.com

See all hotels See all
The Ritz-Carlton, Philadelphia

The Residences at The Ritz-Carlton, Philadelphia

The Fairmount Water Works in Philadelphia, Pennsylvania was

The Rodin Museum is a museum located in Philadelphia, Pennsylvania

The Academy of Natural Sciences of Drexel University, formerly the

The Cathedral Basilica of Saints Peter and Paul, head church of the

The Cascade (Armenian: Կասկադ Kaskad), is a giant stairway in Yerev 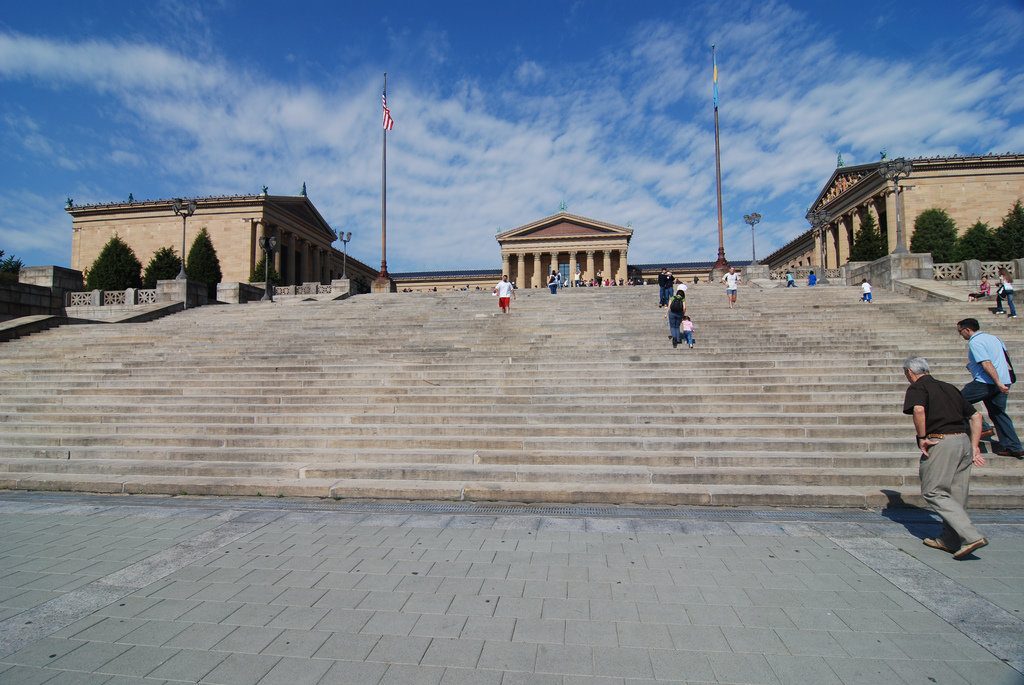 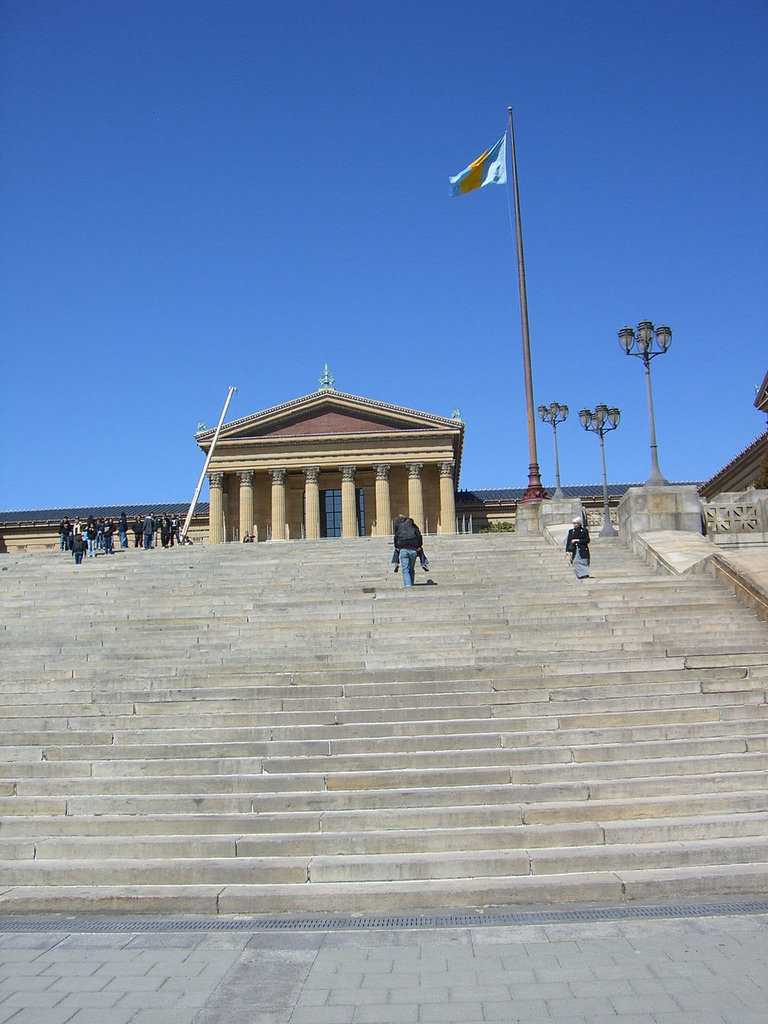 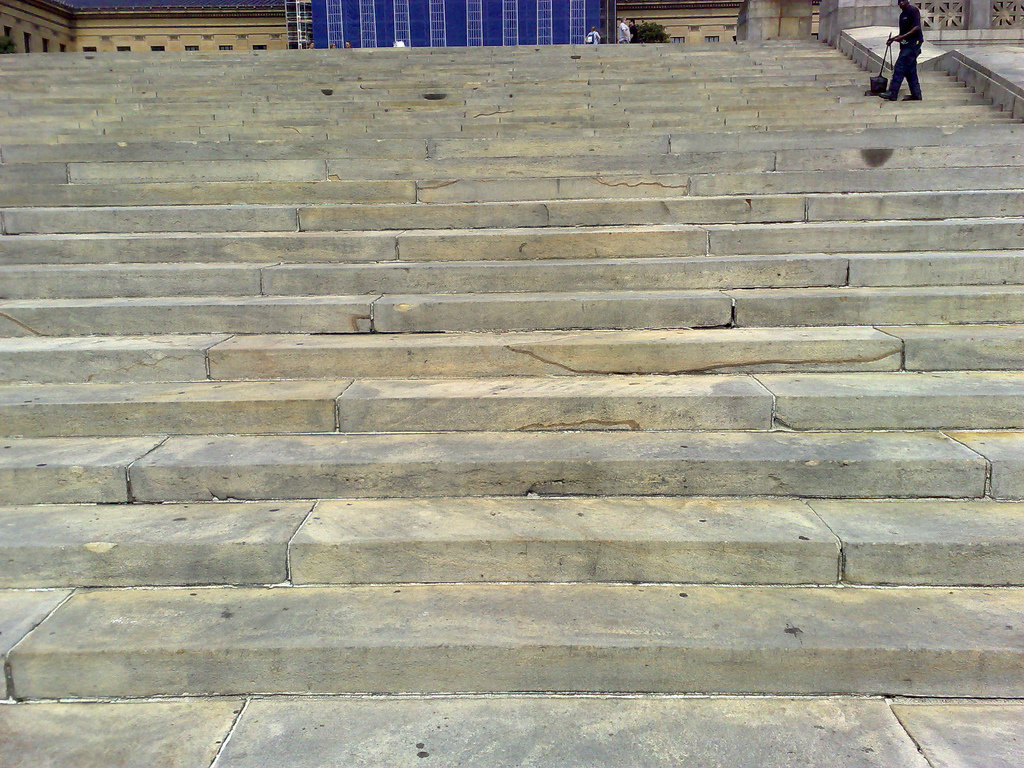 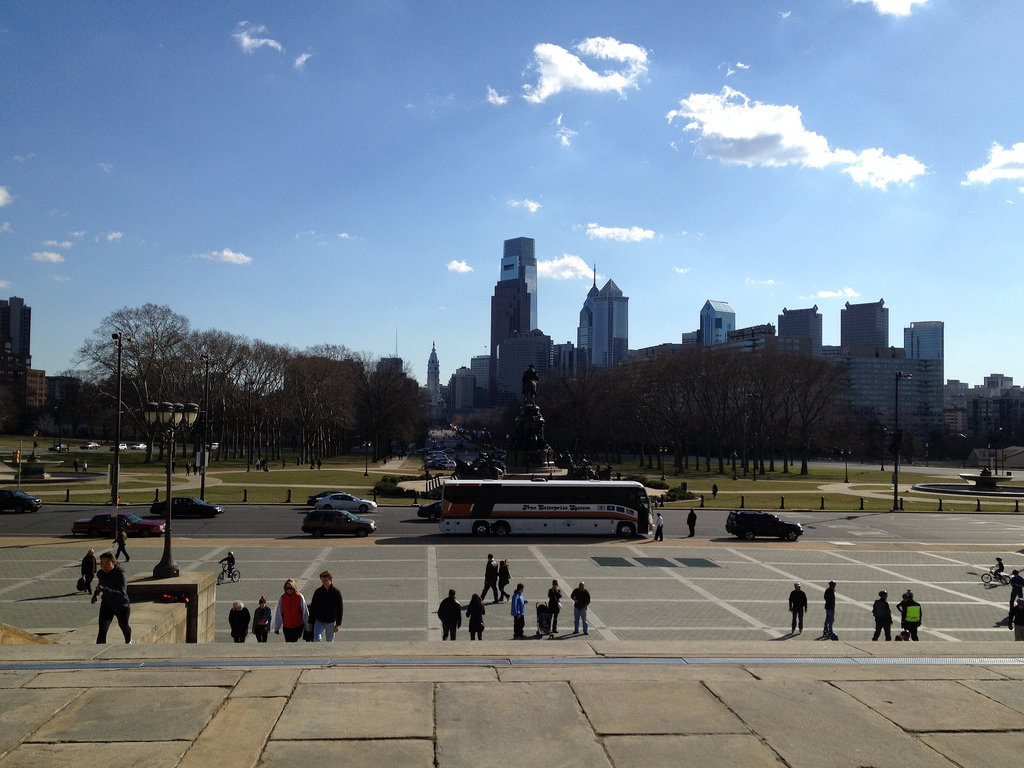