×
What are you looking for?
See all results
Bridges in Antirhion 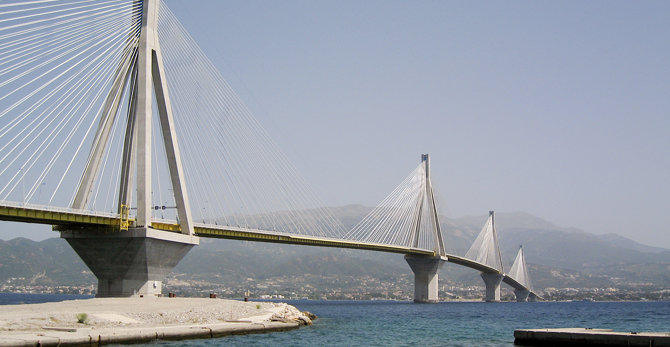 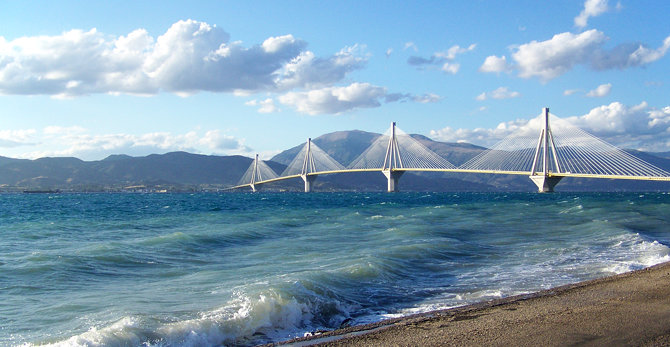 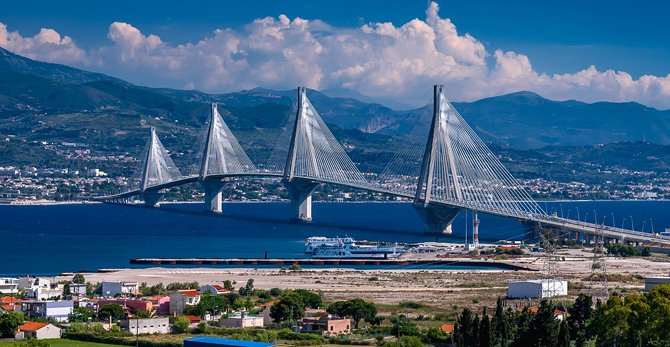 The Rio-Antirrio bridge (Greek: Γέφυρα Ρίου-Αντιρρίου), officially the Charilaos Trikoupis bridge after the statesman who first envisioned it, is a cable-stayed bridge crossing the Gulf of Corinth near Patras, linking the town of Rio on the Peloponnese to Antirrio on mainland Greece.

Its official name is the Charilaos Trikoupis Bridge. Charilaos Trikoupis was a 19th century Greek prime minister, and suggested the idea of building a bridge between Rio and Antirrio; however, the endeavour was too expensive at the time, when Greece was trying to get a late foot into the Industrial Revolution.

The 2,880 m (9,449 ft) long bridge dramatically improves access to and from the Peloponnese, which could previously be reached only by ferry or via the isthmus of Corinth at its extreme east end. Its width is 28 m (92 ft) — it has two vehicle lanes per direction, an emergency lane and a pedestrian walkway. Its five-span four-pylon cable-stayed portion of length 2,252 m (7,388 ft) is the world's second longest cable-stayed deck; only the deck of the Millau Viaduct is longer at 2,460 m (8,071 ft). However, as the latter is also supported by bearings at the pylons apart from cable stays, the Rio-Antirrio bridge deck might be considered the longest cable-stayed "suspended" deck.

This bridge is widely considered[] to be an engineering masterpiece owing to several solutions applied to span the difficult site. These difficulties include deep water, insecure materials for foundations, seismic activity, the probability of tsunamis, and the expansion of the Gulf of Corinth due to plate tectonics.

The bridge was planned in the mid-1990s and was built by a French-Greek consortium led by the French group Vinci, and which includes the Greek companies Hellenic Technodomiki-TEV, J&P-Avax, Athena, Proodeftiki and Pantechniki. The consortium operates the bridge under concession under its Γ.Ε.Φ.Υ.Ρ.Α. or ΓαλλοΕλληνικός Φορέας Υπερθαλάσσιας ζεύξης Ρίου- Αντιρίου (G.E.F.Y.R.A., Greek for "bridge", French-Greek Carrier of Oversea Connection of Rio-Antirrio) subsidiary. The lead architect was Berdj Mikaelian. Site preparation and dredging began in July 1998, and construction of the massive supporting pylons in 2000. With these complete in 2003, work began on the traffic decks and supporting cables. On May 21, 2004, the main construction was completed; only equipment (sidewalks, railings, etc.) and waterproofing remained to be installed. The bridge was finally inaugurated on August 7, 2004, a week before the opening of the 2004 Summer Olympics in Athens.

The total cost of the bridge was about € 630,000,000, funded by Greek state funds, the consortium and loans by the European Investment Bank. It was finished ahead of its original schedule, which had foreseen completion between September and November 2004, and within budget.

Due to the peculiar conditions of the straits, several unique engineering problems needed to be considered. The water depth reaches 65 m, the seabed is mostly of loose sediment, the seismic activity and possibility of tectonic movement is significant, and the Gulf of Corinth is expanding at a rate of about 30 mm a year. For these reasons, special construction techniques were applied. The piers are not buried into the seabed, but rather rest on a bed of gravel which was meticulously leveled to an even surface (a difficult endeavor at this depth). During an earthquake, the piers should be allowed to move laterally on the seabed with the gravel bed absorbing the energy. The bridge parts are connected to the pylons using jacks and dampers to absorb movement; too rigid a connection would cause the bridge structure to fail in the event of an earthquake. It was also important that the bridge not have too much lateral leeway either so as not to damage the piers. There is provision for the gradual expansion of the strait over the bridge's lifetime.

On 28 January 2005, six months after the opening of the bridge, one of the cable links of the bridge snapped from the top of the M3 pylon and came crashing down on the deck. Traffic was immediately halted. The first investigation claimed that a fire had broken out on the top of the M3 pylon, after a lightning strike in one of the cables. The cable was immediately restored and the bridge re-opened.

A structural Health monitoring system was installed during construction on the bridge. It is still in place today and provides a 24/7 surveillance of the structure. The system has more than 100 sensors, including:

One of the specific element of the system is the ability to detect and specifically treat Earthquake events.

Kitsakis Travel & Tourism
Οfficially the Charilaos Trikoupis bridge after the politician who first envisaged it, is the world's longest multi-span cable-stayed bridge. It links the town of Rio to Antirrio on west Greece.

The Patras Castle (Ελληνικά. Κάστρο Πατρών) was built around the mi

Patras Lighthouse (ell. Faros Patras) is the symbol of the Greek city

The National Observatory of Athens is a research institute situated in 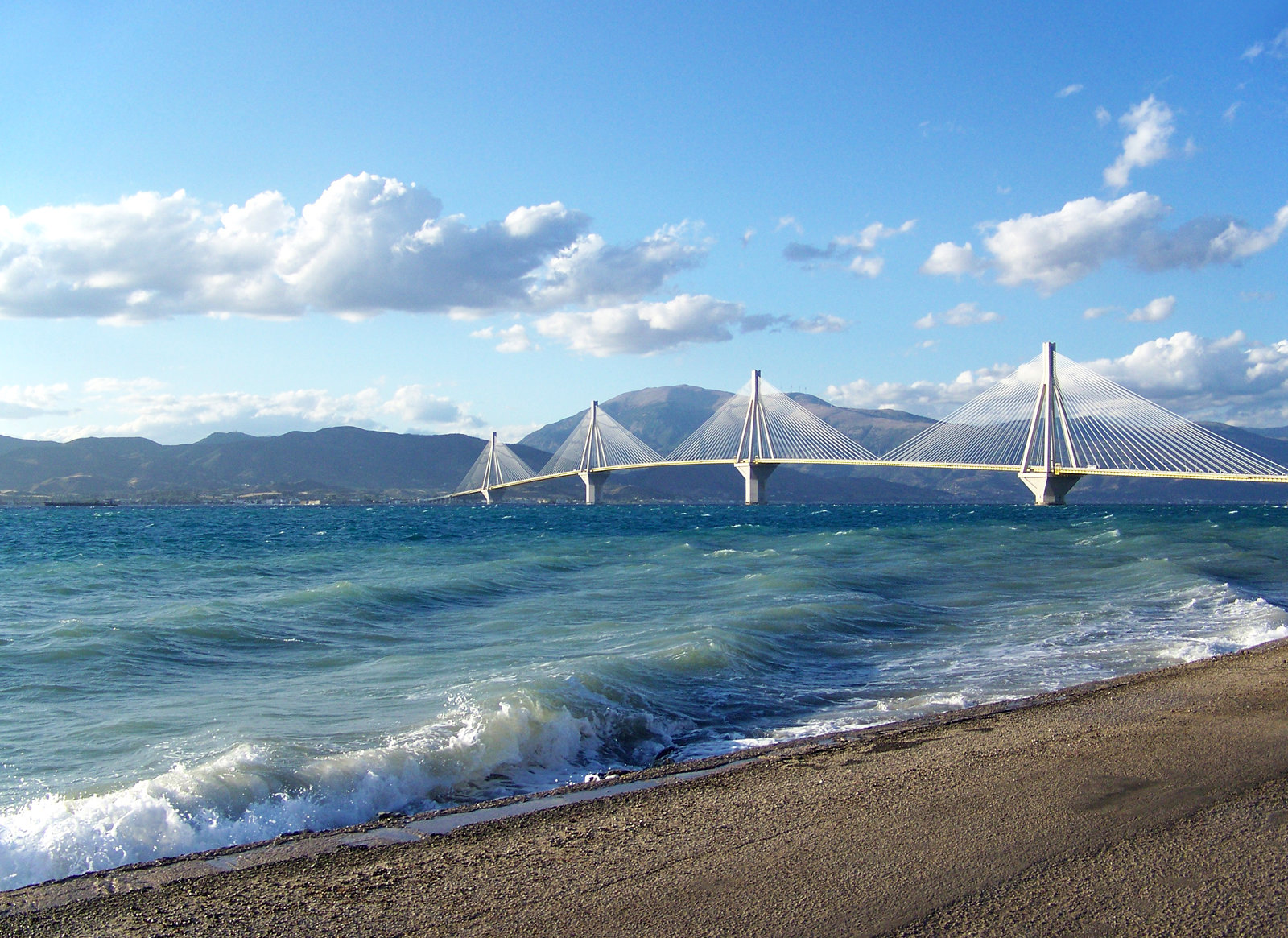 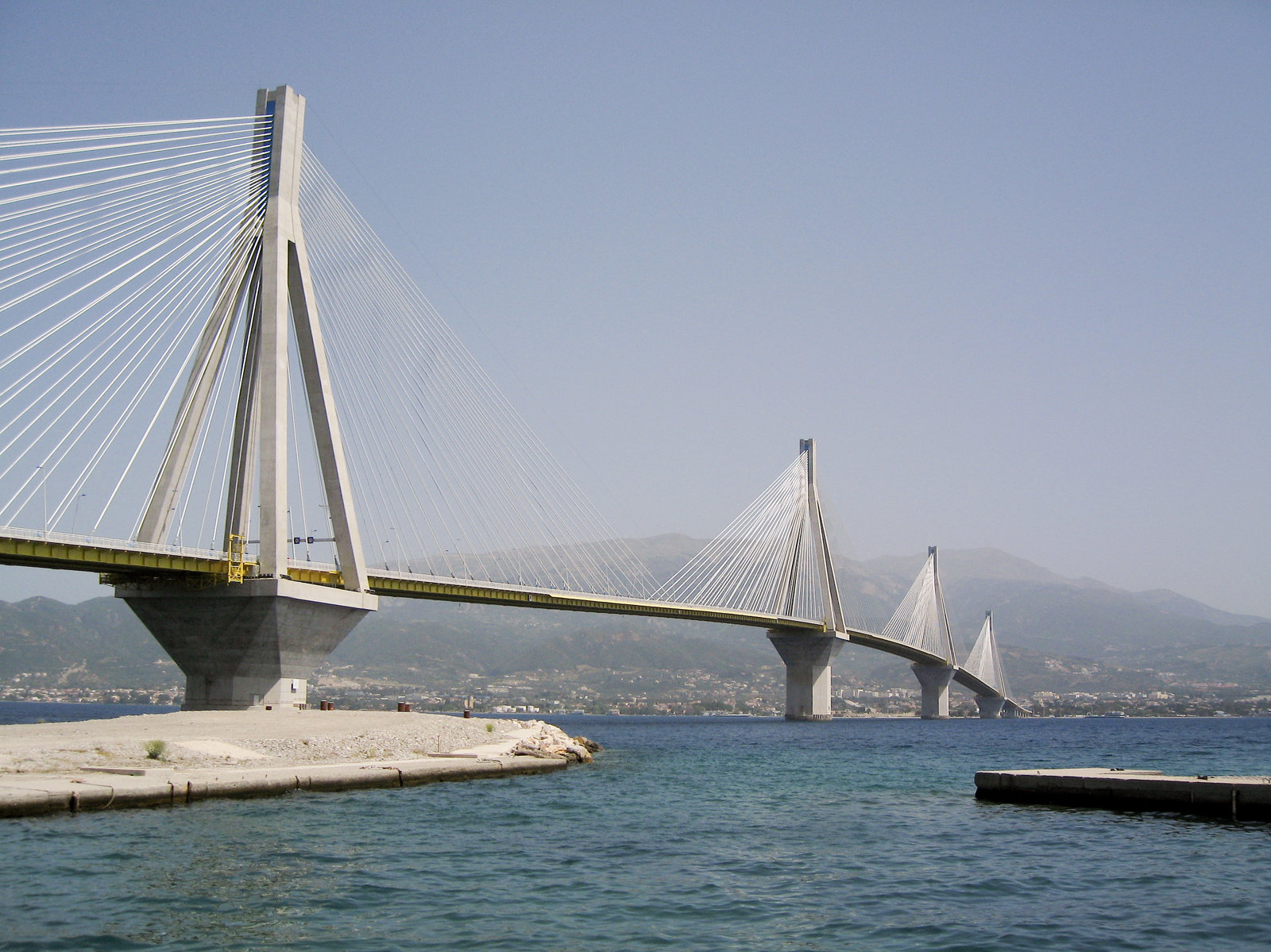 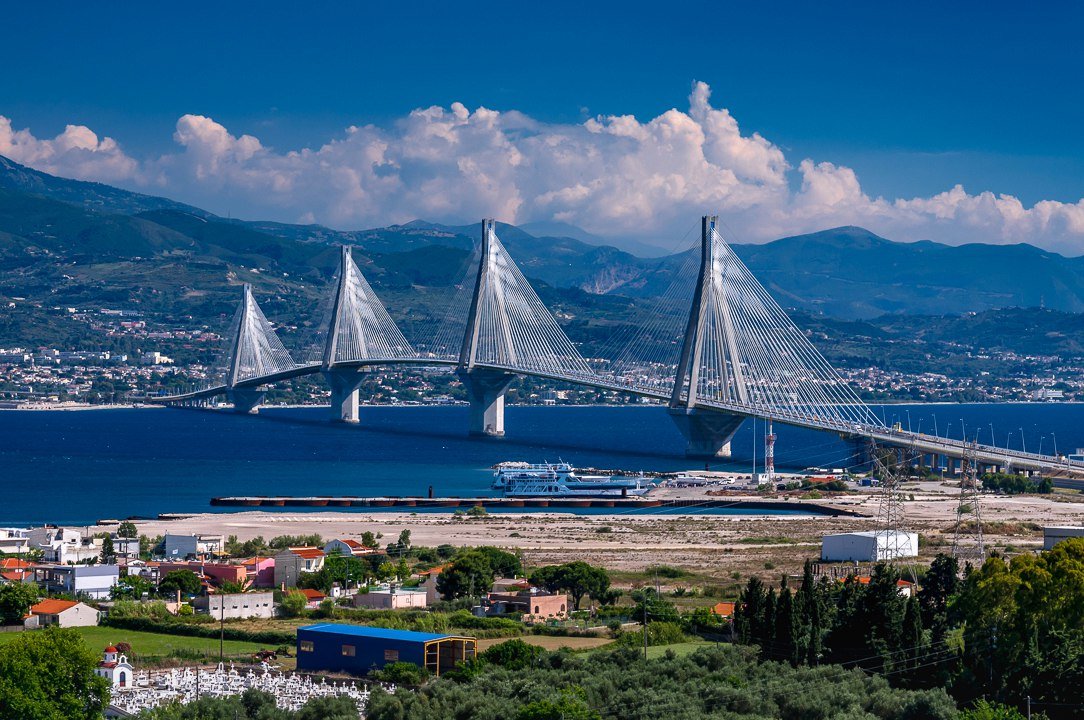 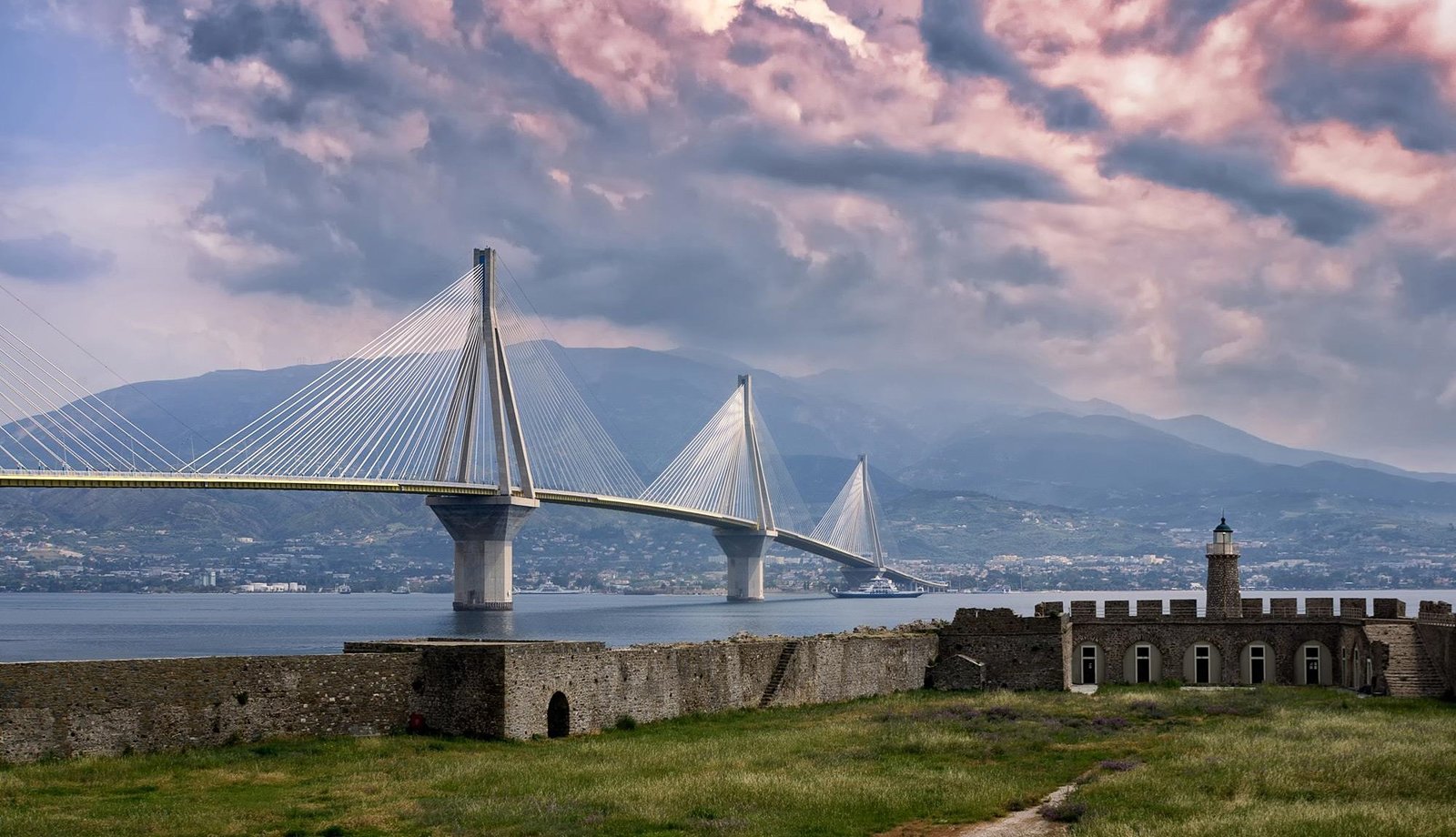 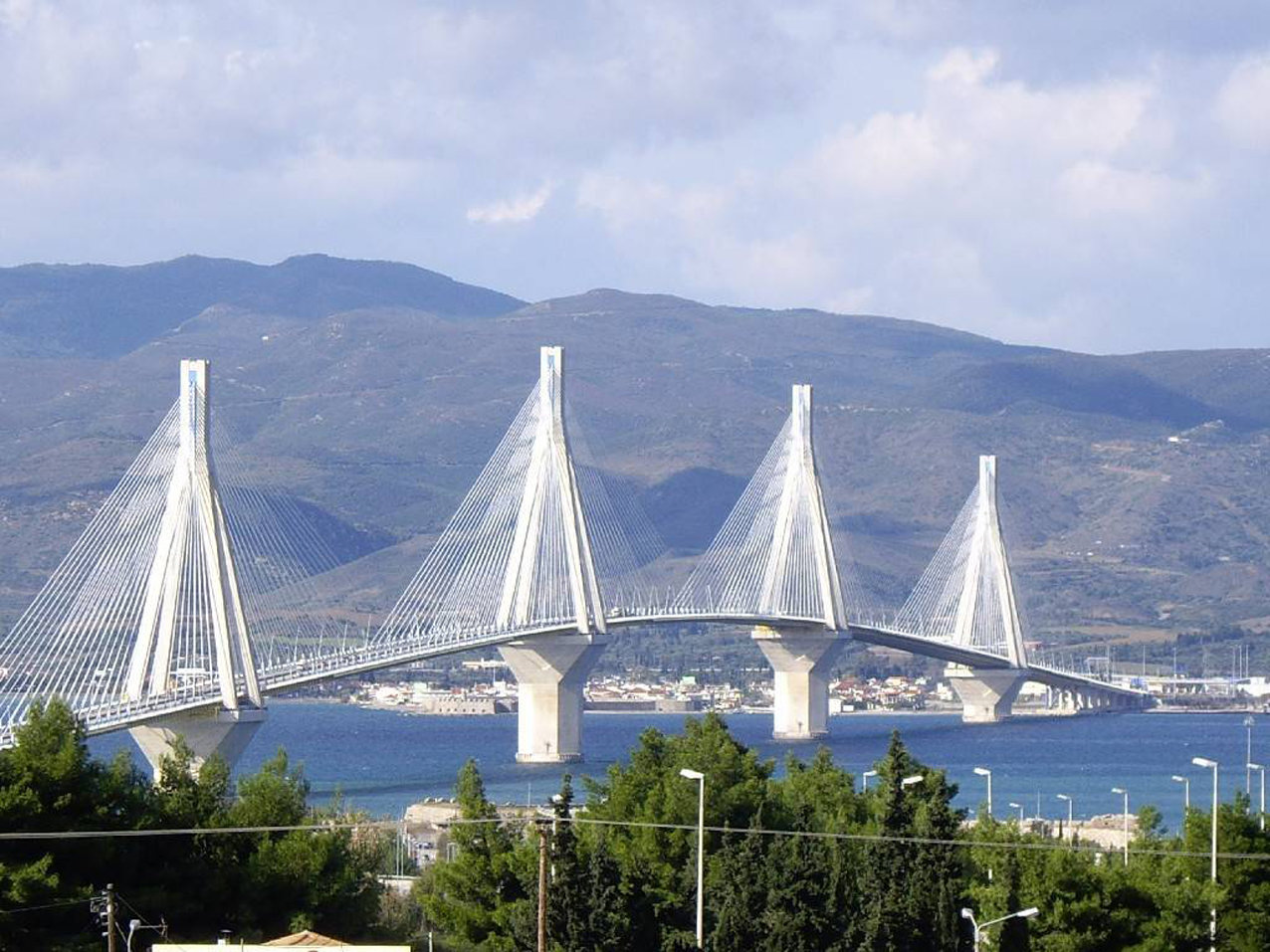 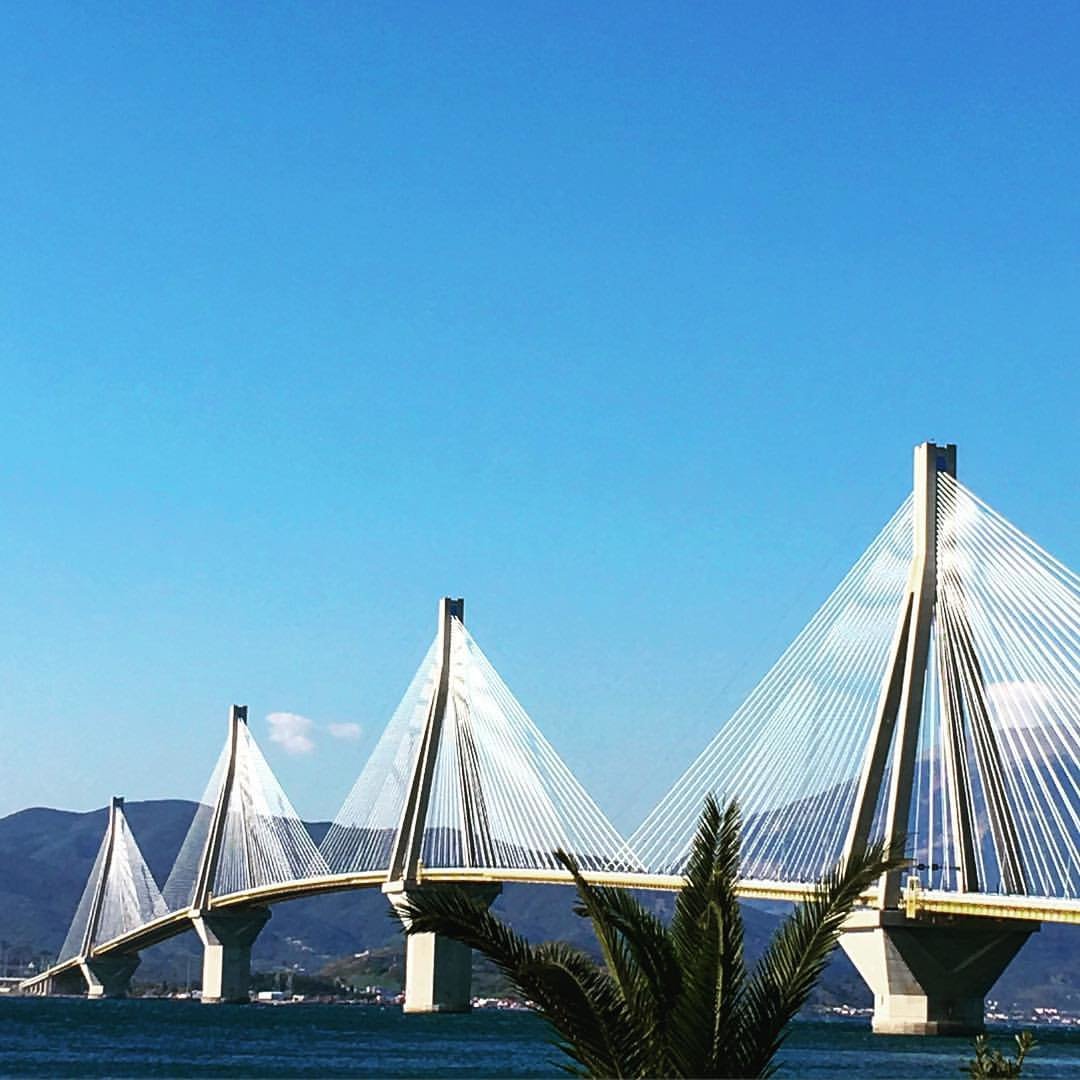 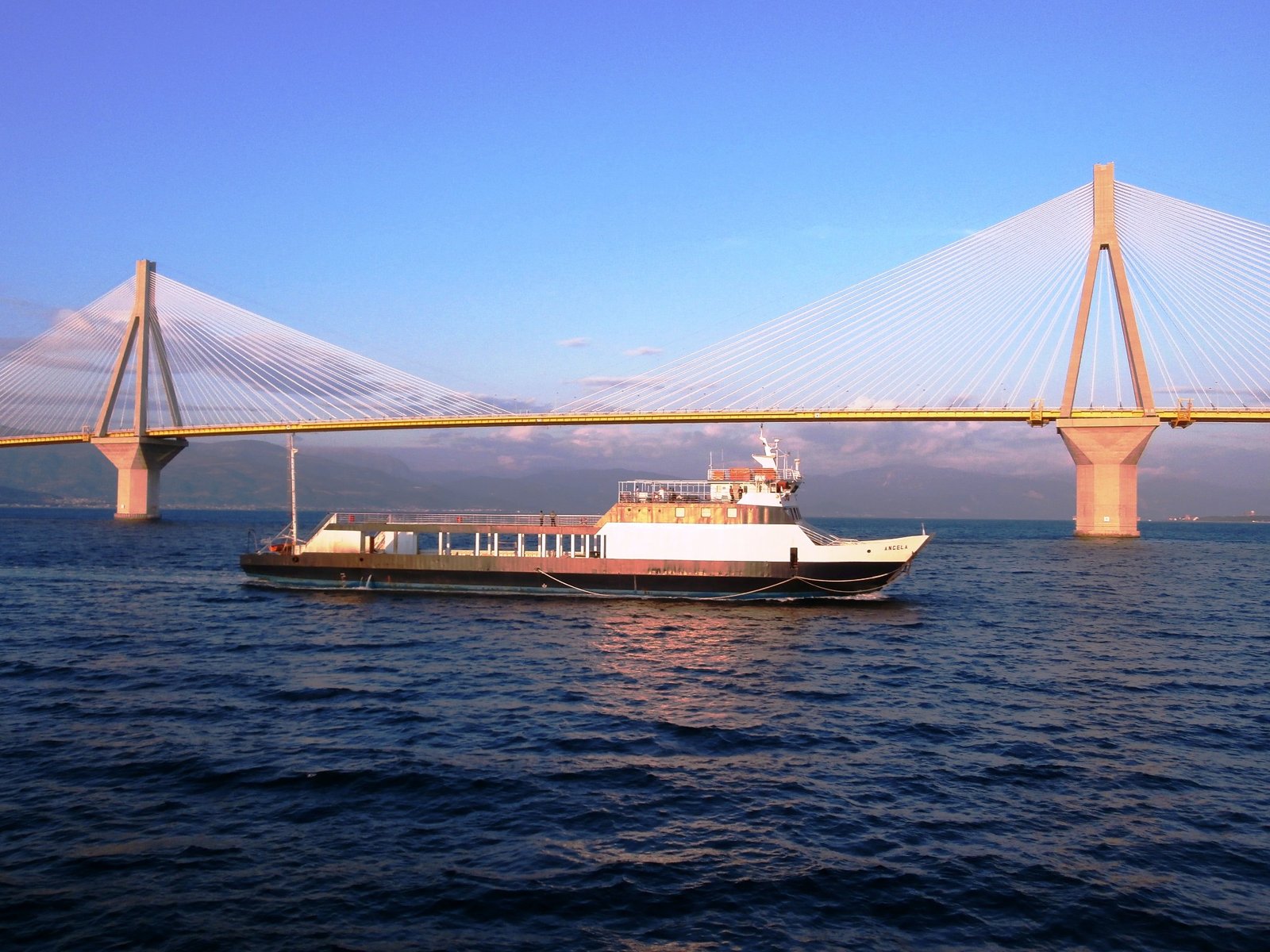 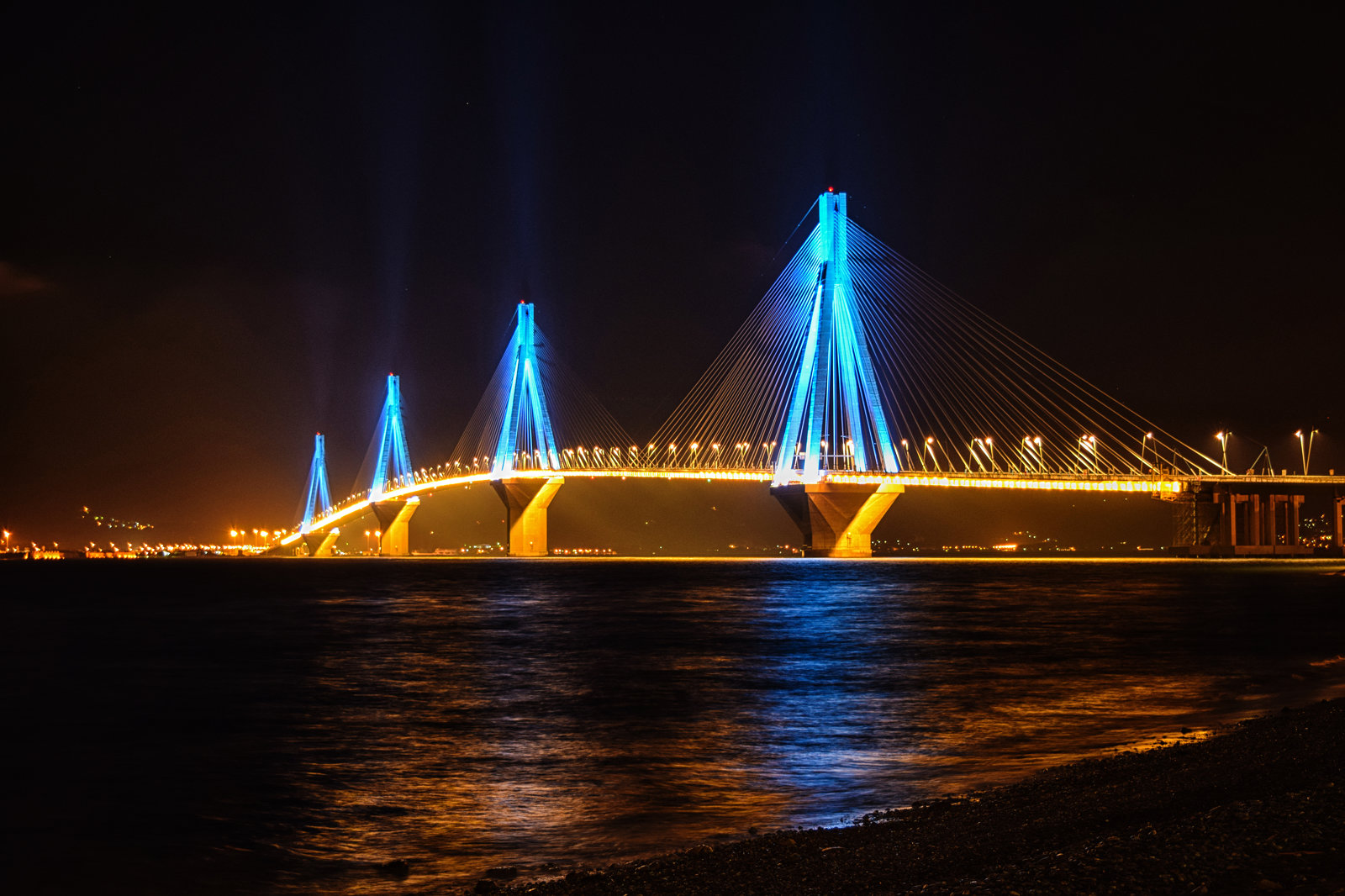 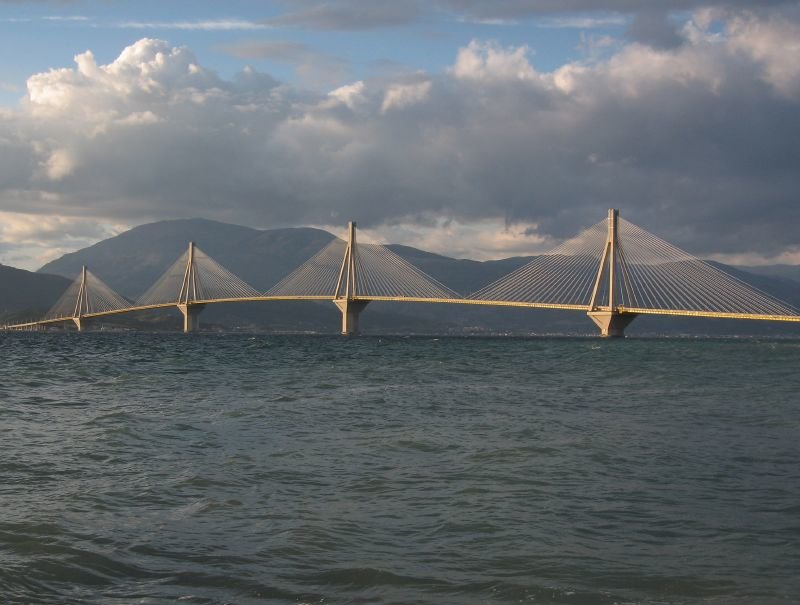 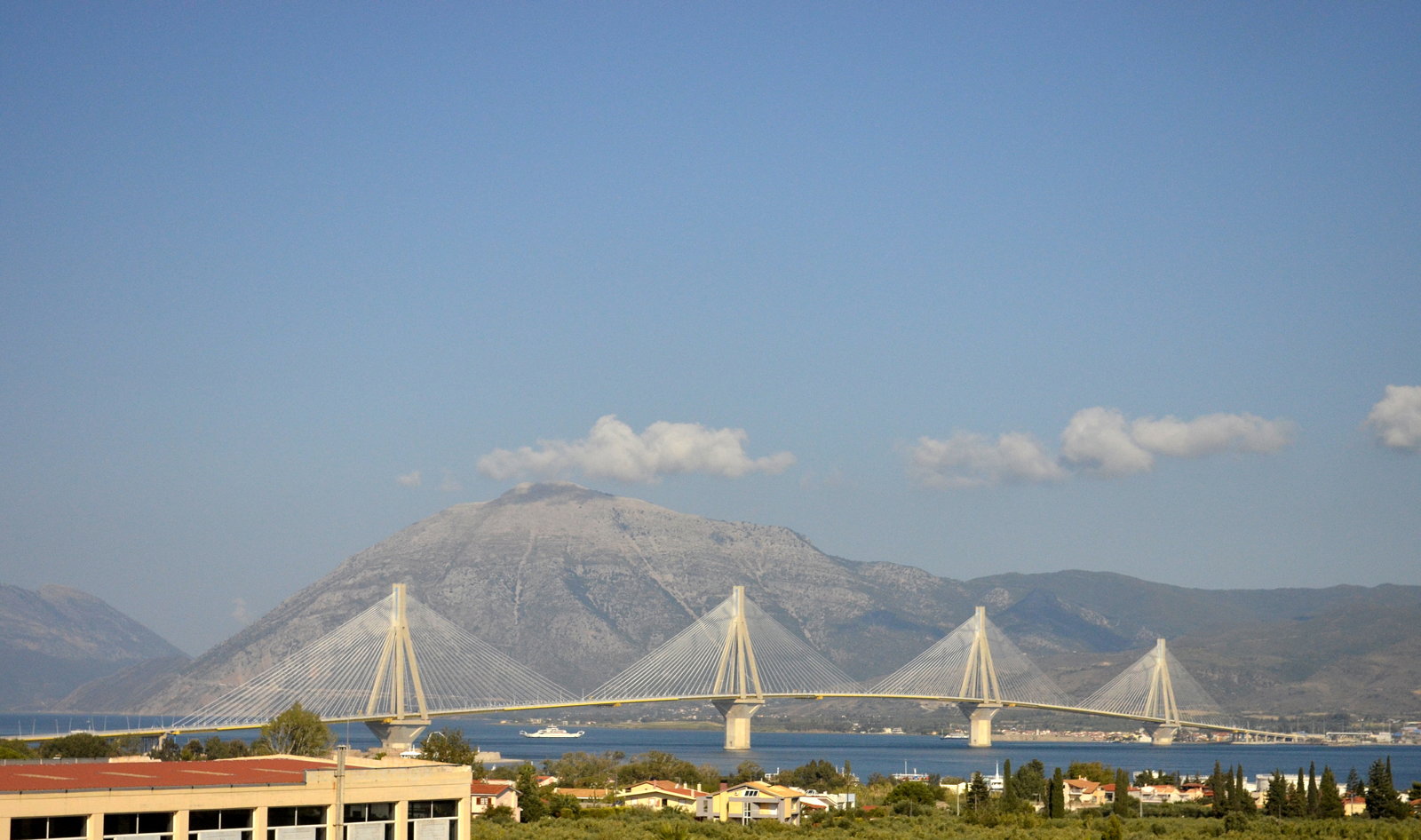 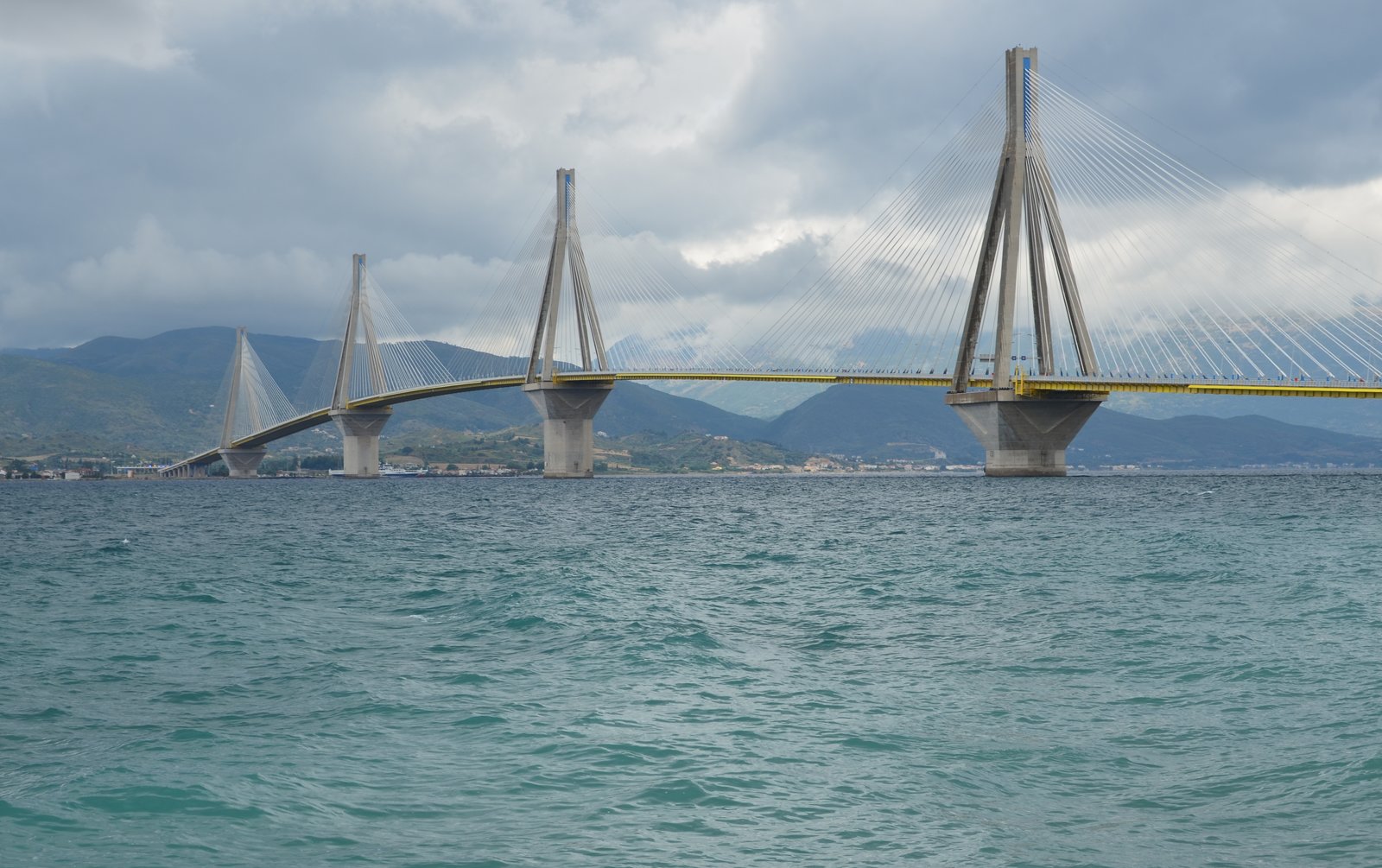 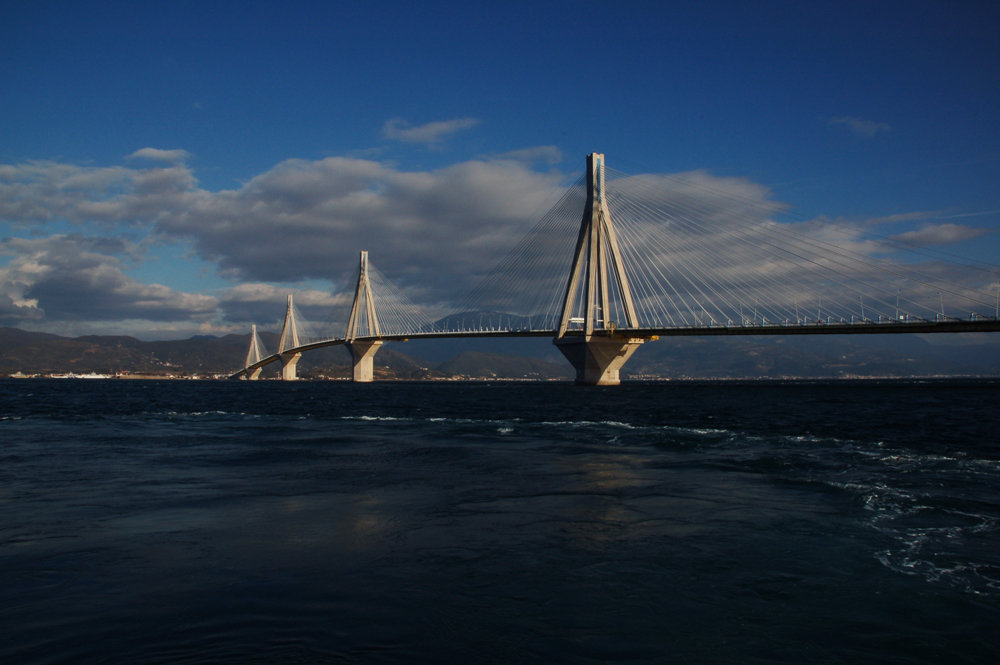 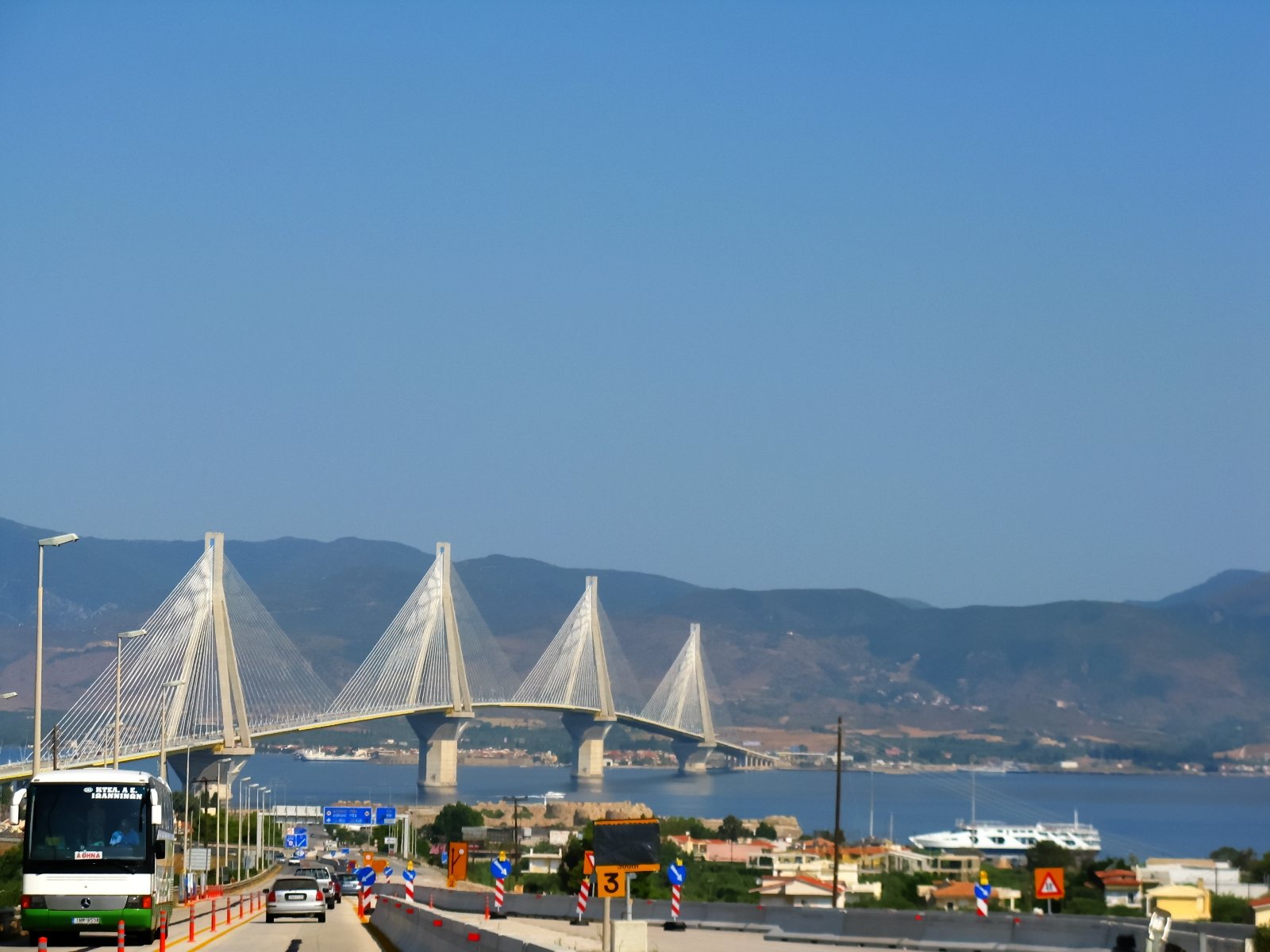 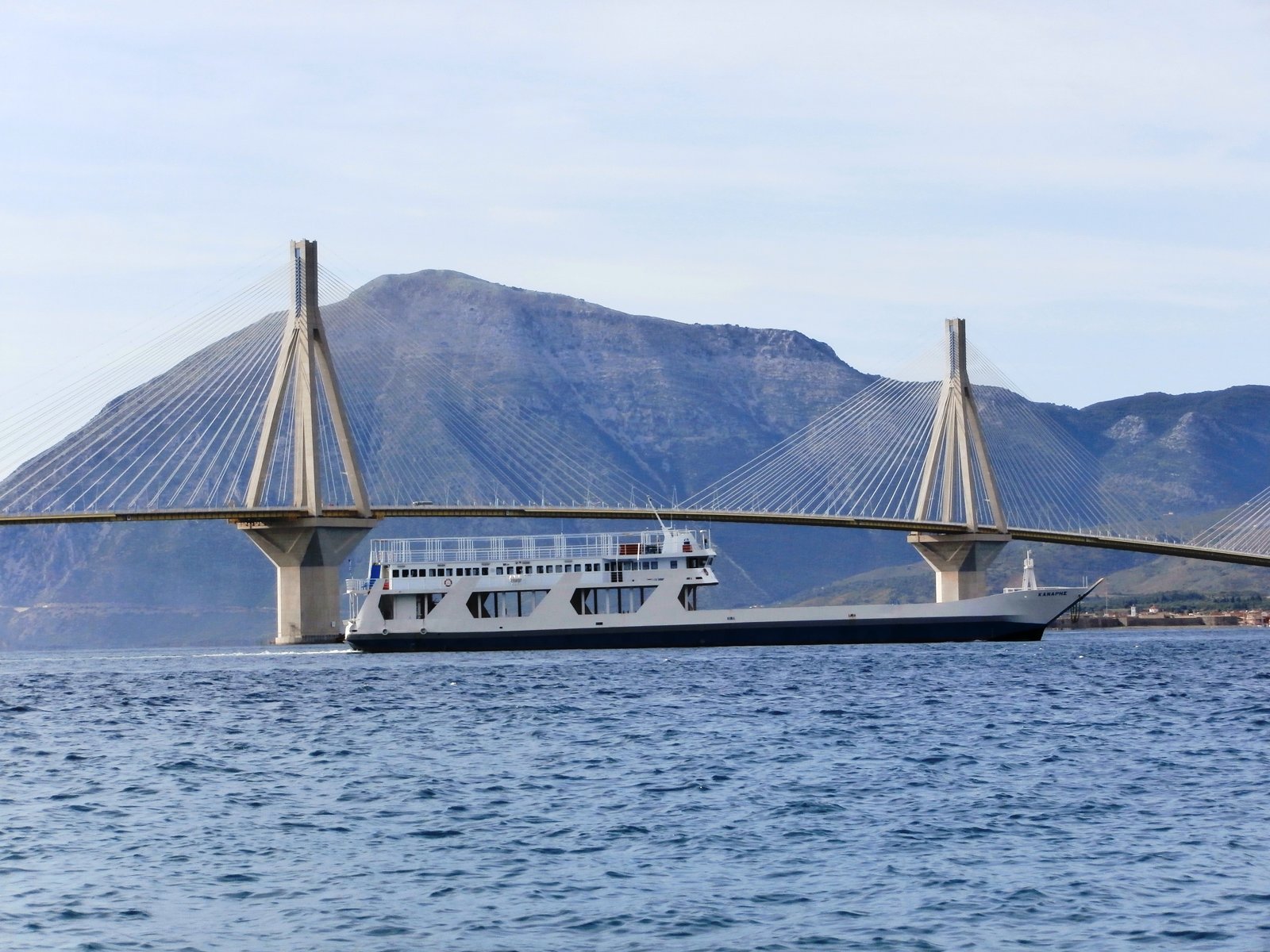 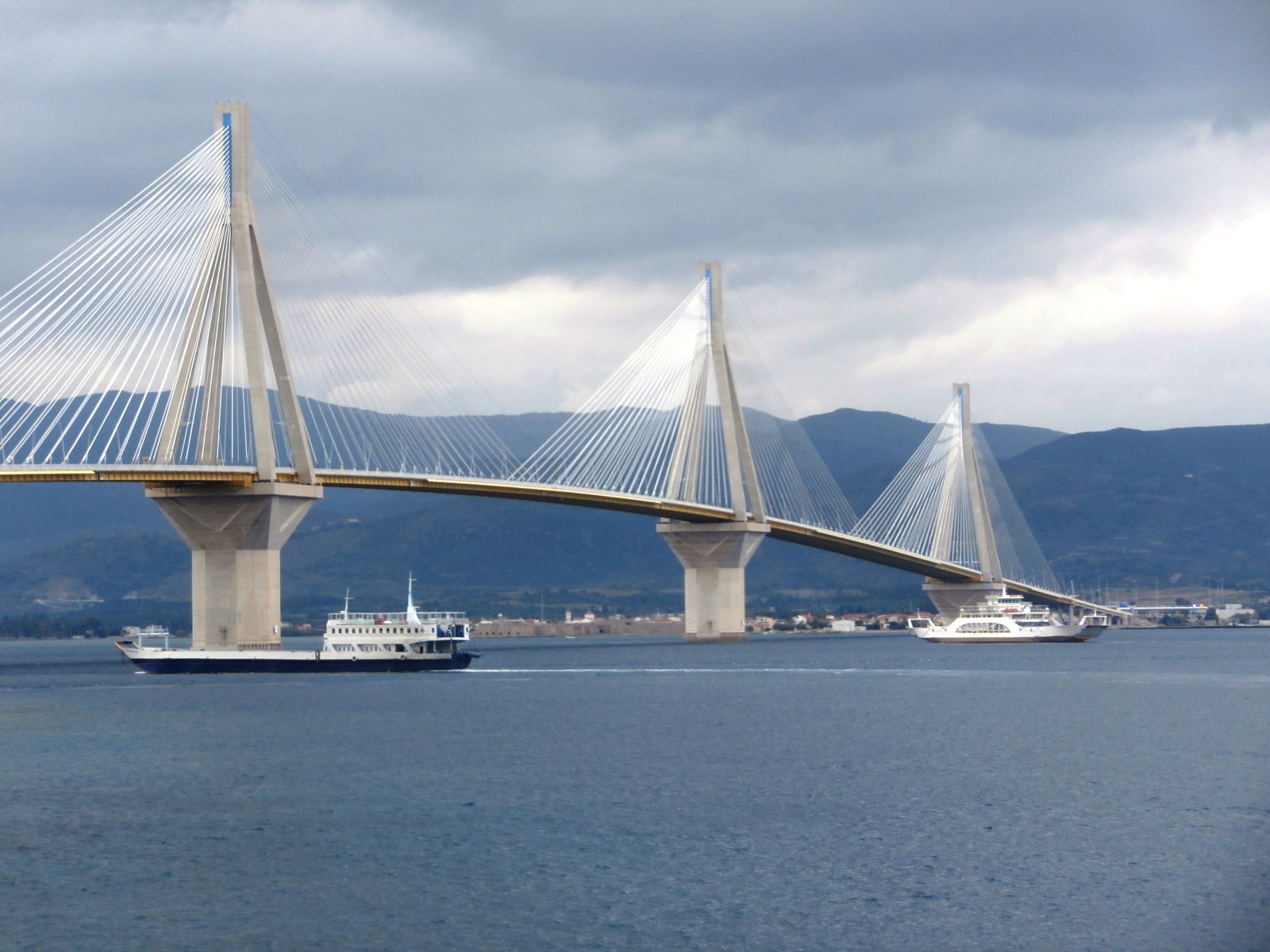 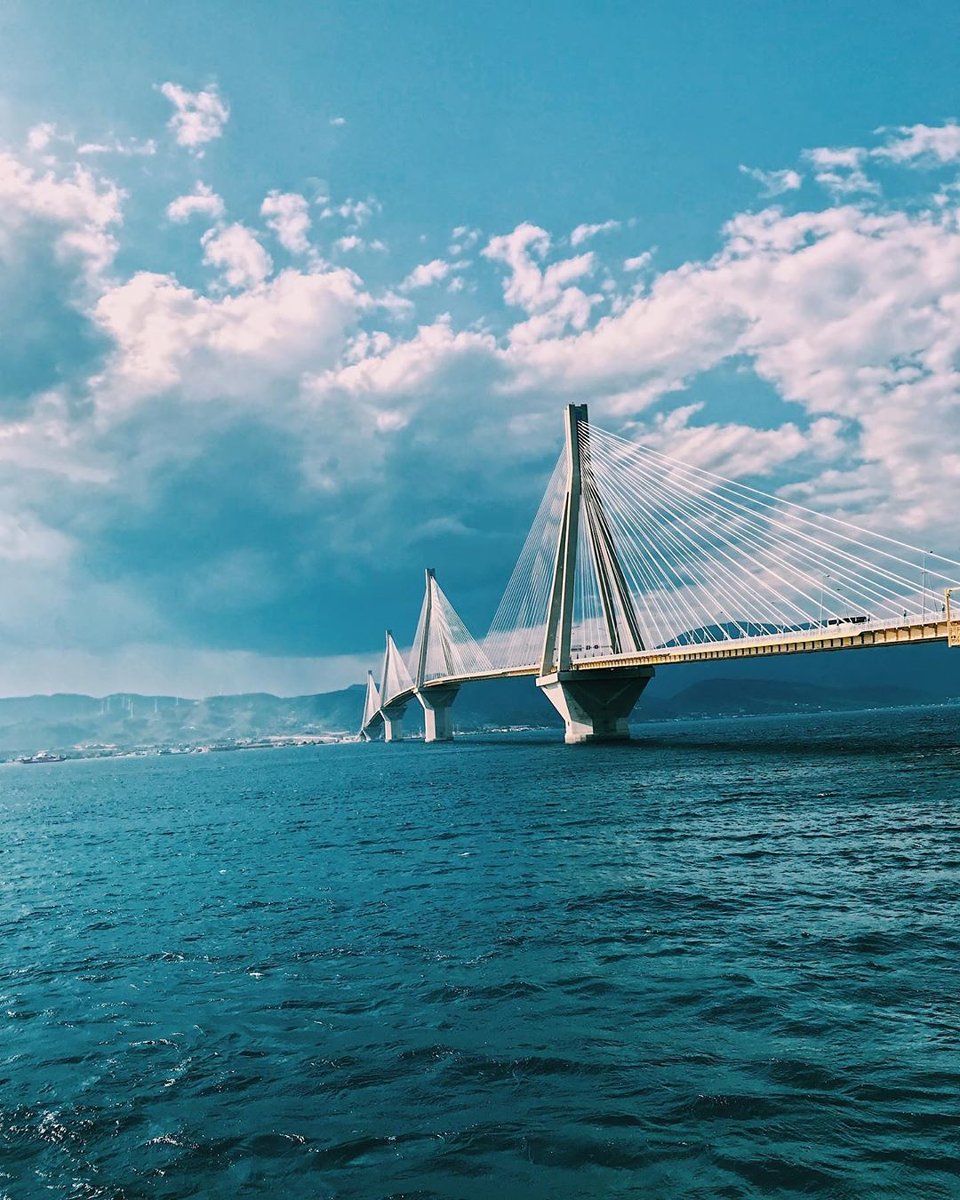 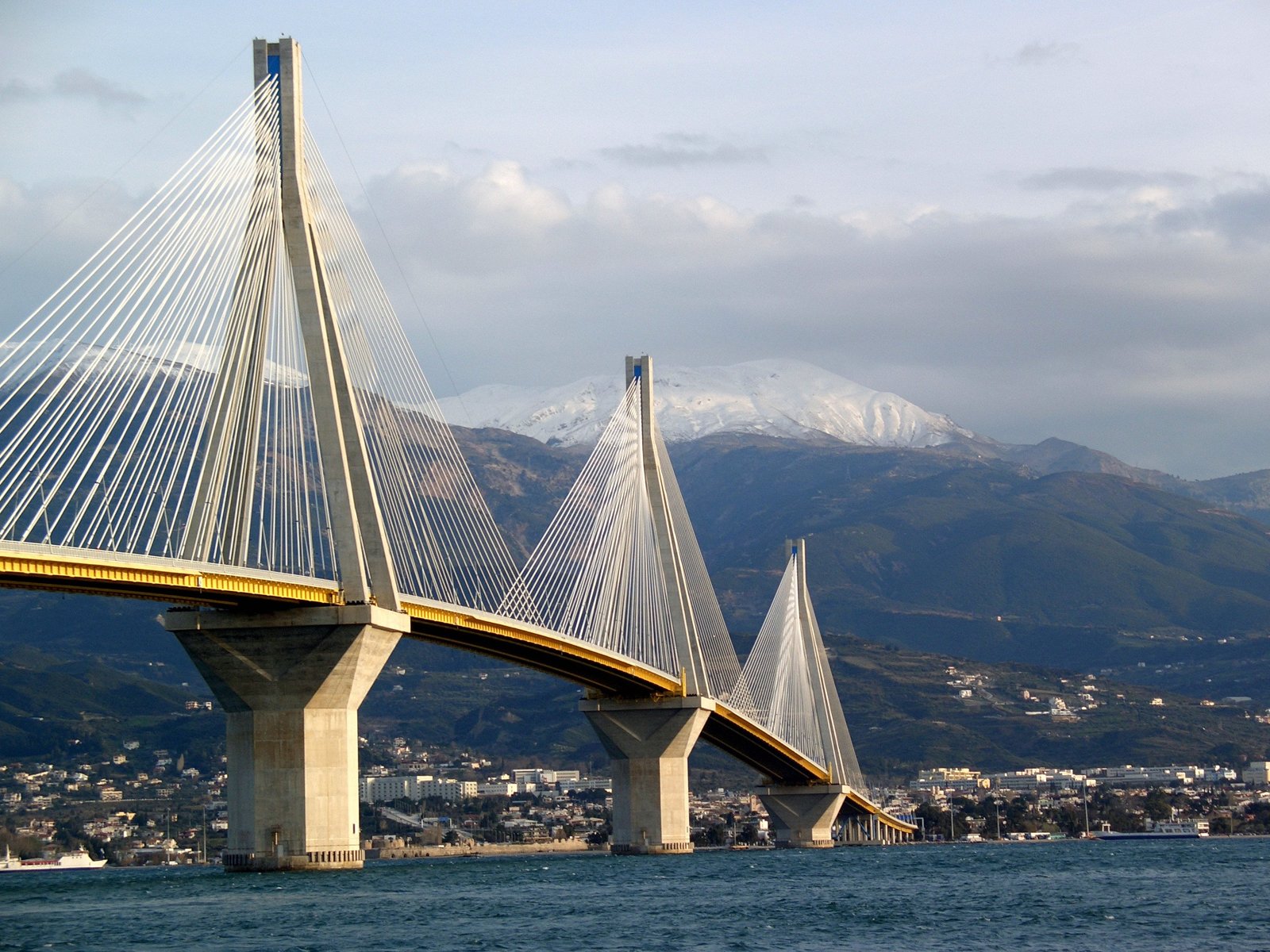 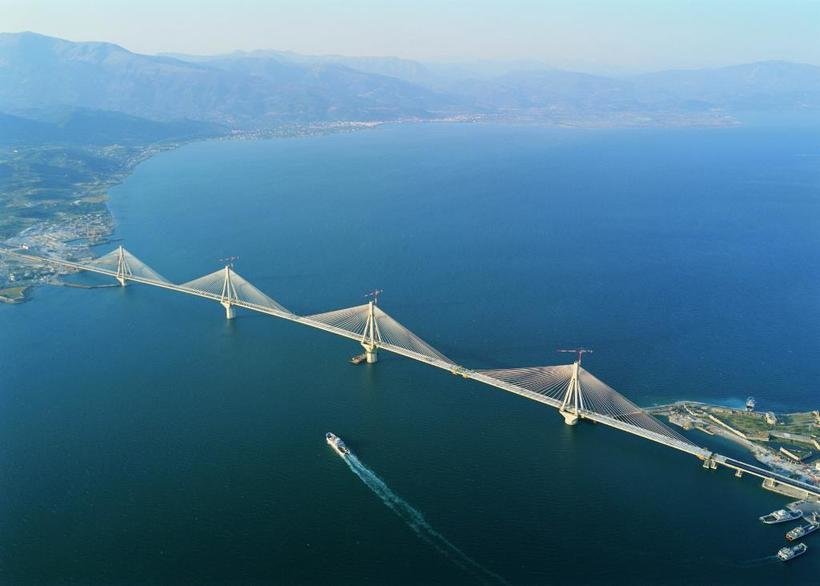 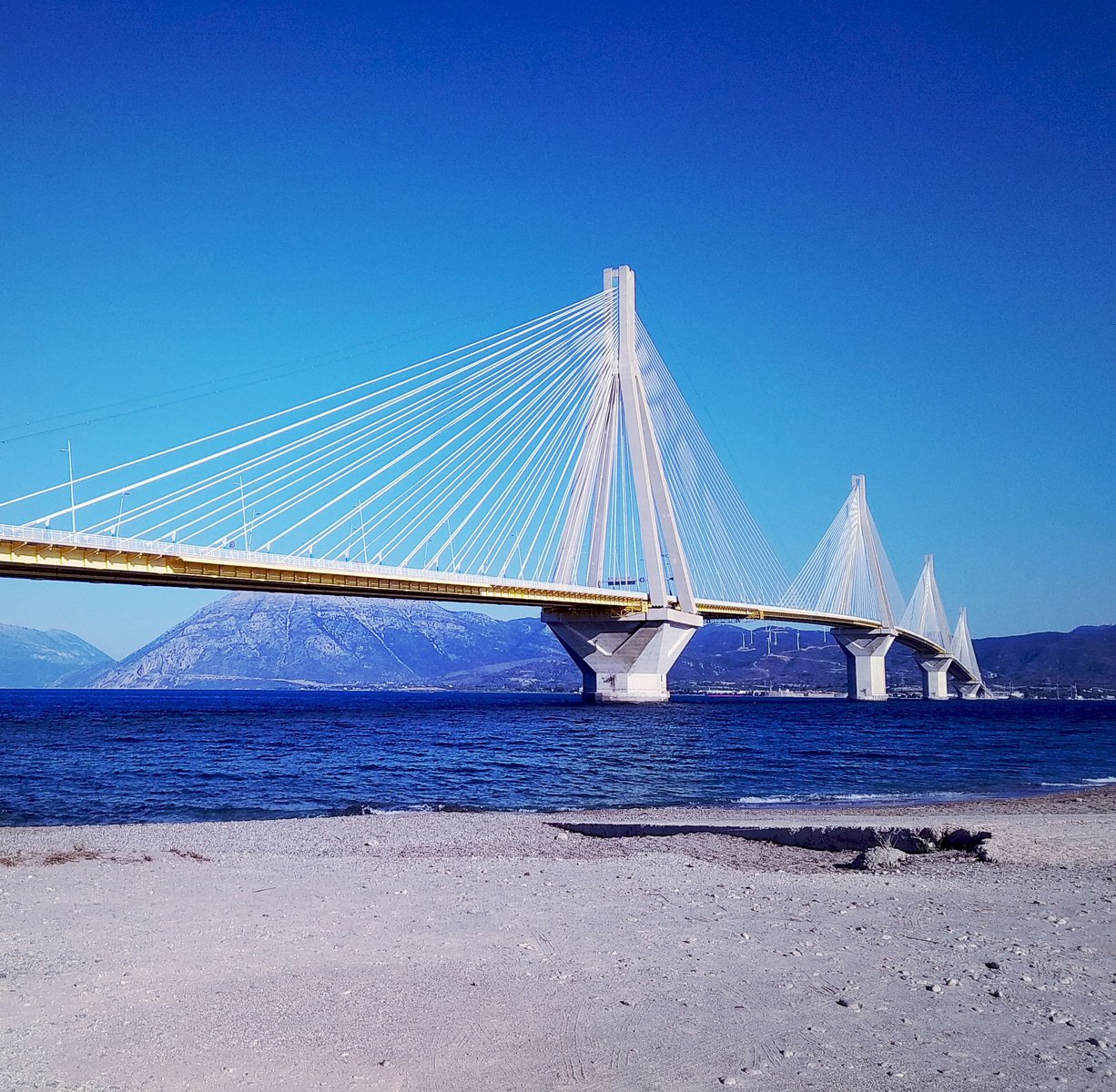