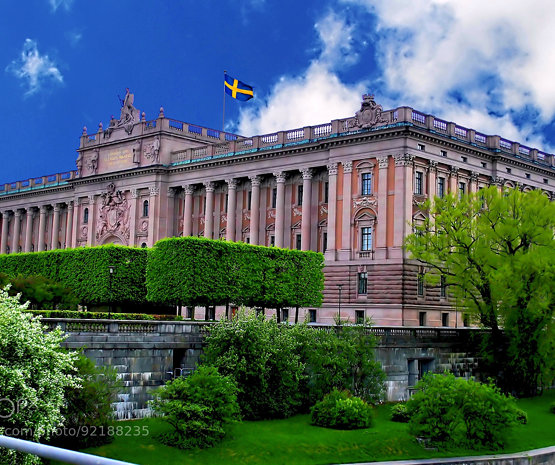 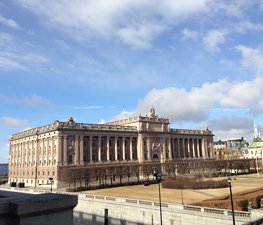 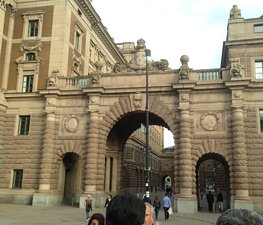 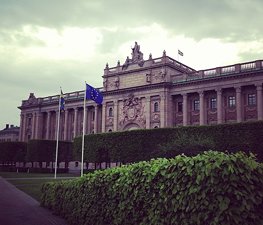 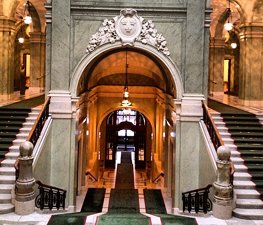 The constitutional functions of the Riksdag are enumerated in the Instrument of Government (svenska. Regeringsformen), and its internal workings are specified in greater detail in the Riksdag Act (svenska. Riksdagsordningen).

The seat of the Riksdag is at Parliament House (svenska. Riksdagshuset), on the island of Helgeandsholmen in the central parts of Stockholm. The Riksdag has its institutional roots in the feudal Riksdag of the Estates, by tradition thought to have first assembled in Arboga in 1435, and in 1866 following reforms of the 1809 Instrument of Government that body was transformed into a bicameral legislature with an upper chamber (svenska. Första Kammaren) and a lower chamber (svenska. Andra Kammaren).

The most recent general election was held on 14 September 2014.

The Swedish word riksdag, in definite form riksdagen, is a general term for "parliament" or "assembly", but it is typically only used for Sweden's legislature and certain related institutions. In addition to Sweden's parliament, it is also used for the Parliament of Finland and the Estonian Riigikogu, as well as the historical German Reichstag and the Danish Rigsdagen. In Swedish use, riksdagen is usually uncapitalized. Riksdag derives from the genitive of rike, referring to royal power, and dag, meaning diet or conference; the German word Reichstag and the Danish Rigsdag are cognate. The Oxford English Dictionary traces English use of the term "Riksdag" in reference to the Swedish assembly back to 1855.

Шаблон:MainШаблон:See also The roots of the modern Riksdag can be found in a 1435 meeting of the Swedish nobility in the city of Arboga. This informal organization was modified in 1527 by the first modern Swedish king Gustav I Vasa to include representatives from all the four social estates: the nobility, the clergy, the burghers (property-owning commoners in the towns such as merchants etc.), and the yeomanry (freehold farmers). This form of Ständestaat representation lasted until 1865, when representation by estate was abolished and the modern bicameral parliament established. Effectively, however, it did not become a parliament in the modern sense until parliamentary principles were established in the political system in Sweden, in 1917.

On 22 June 1866, the Riksdag decided to reconstitute itself as a bicameral legislature, consisting of Första kammaren or the First Chamber, with 155 members and Andra kammaren or the Second Chamber with 233 members. The First Chamber was indirectly elected by county and city councillors, while the Second Chamber was directly elected by universal suffrage. This reform was a result of great malcontent with the old Estates, which, following the changes brought by the beginnings of the industrial revolution, was no longer able to provide representation for large segments of the population.

By an amendment to the 1809 Instrument of Government, the general election of 1970 was the first to a unicameral assembly with 350 seats. The following general election to the unicameral Riksdag in 1973 only gave the Government the support of 175 members, while the opposition could mobilize an equal force of 175 members. In a number of cases a tied vote ensued, and the final decision had to be determined by lot. To avoid any reoccurrence of this unstable situation, the number of seats in the Riksdag was reduced to 349, from 1976 and onwards.

Шаблон:Main The riksdag performs the normal functions of a legislature in a parliamentary democracy. It enacts laws, amends the constitution and appoints a government. In most parliamentary democracies, the head of state commissions a politician to form a government. Under the new Instrument of Government (one of the four fundamental laws of the Constitution) enacted in 1974, that task was removed from the Monarch of Sweden and given to the Speaker of the Riksdag. To make changes to the Constitution under the new Instrument of Government, amendments must be approved twice, in two successive electoral periods with a regular general election held in between.

There are 15 parliamentary committees in the Riksdag, including the Committee on the Constitution.

As of February 2013, 44.7 percent of the members of the Riksdag are women. This is the world's fourth highest proportion of females in a national legislature—behind only the Parliaments of Rwanda, Andorra, and Cuba – hence the second-highest in the developed world and among parliamentary democracies. Following the 2014 elections, in which the share of Liberal female MPs plunged (from 42% to 26%, mainly due to a reduction to a single seat in most constituencies) and the Sweden Democrats more than doubled their seats (though increasing the number of female MPs from three to eight), the figure dropped to 43,5 %. Only the Left Party has an overhang of female MPs; 12 of 21 as of 2014.

According to a survey investigation by the sociologist Jenny Hansson, Members of the Riksdag have an average work week of 66 hours, including side responsibilities. Hansson's investigation further reports that the average member sleeps 6.5 hours per night.

The presidium consists of a speaker and three deputy speakers. They are elected for a 4-years term.

Шаблон:Main Шаблон:Politics of Sweden After holding talks with leaders of the various party groups in the Riksdag, the speaker of the Riksdag nominates a Prime Minister (svenska. Statsminister literally minister of state). The nomination is then put to a vote. The nomination is rejected (meaning the Speaker must find a new nominee) only if an absolute majority of the members (175 members) vote "no"; otherwise, it is confirmed. This means the Riksdag can consent to a Prime Minister without casting any "yes" votes.

If a vote of no confidence is cast against the Prime Minister this means the entire government is rejected. A losing government has one week to call for a general election or else the procedure of nominating a new Prime Minister starts anew.

Political parties are strong in Sweden, with members of the Riksdag usually supporting their parties in parliamentary votes. In most cases, governments can command the support of the majority in the Riksdag, allowing the government to control the parliamentary agenda.

No single party has won an outright majority in the Riksdag since 1968. Political parties with similar agendas consequently cooperate on several issues, forming coalition governments or other formalized alliances. Currently, two major blocs exist in parliament, the socialist/green Red-Greens and the conservative/liberal Alliance for Sweden. The latter—consisting of the Moderate Party, Liberal, Centre Party, and Christian Democrats—governed Sweden from 2006 through most of 2014 (after 2010 through a minority government). The Red-Greens combination disbanded on 26 October 2010 but continued to be considered the main opposition.

All 349 members of the Riksdag are elected in the general elections held every four years. Eligible to vote and stand for elections are Swedish Citizens who turn 18 years old no later than on the day of the election. A minimum of 4% of the national vote is required for a party to enter the Riksdag, alternatively 12% or more within a constituency. Substitutes for each deputy are elected at the same time as each election, so by-elections are rare. In the event of a snap election, the newly elected members merely serve the remainder of the four-year term.

Constituencies and national apportionment of seats

On September 14, 2014 an election was held. No party won an absolute majority but the center-left coalition led by the Social Democrats became the largest political grouping, with the Moderate Party and its center-right alliance falling to second place. The third largest party is the Sweden Democrats, widely described as "anti-immigration". The Social Democrats have said that they will seek to form a government, but will not work with the Sweden Democrats. Meanwhile, Reinfeldt announced he was stepping down as leader of the Moderate Party.

StockholmOurWay
The island that the Parliament Building stands on, Helgeandsholmen, is just one of four islands that the district of Gamla Stan, Old Town, is made up by. Can you name the other three?

Sofie ????
The (free) tours are really nice! The guides are well informed and very kind. Love the fact representatives are sitting by region.

StockholmOurWay
Parliament Building, from where the country of Sweden is governed. The part that you see in the photo was added in the 1970s, it was originally built for the State Bank of Sweden.

Paolo Lim
Free tour on weekends available but you need to queue early because only the first 28 to queue will be accepted. There is no possibility to book a place in advance.

Gabriel M.
Free guided tours in Swedish or English. Only 28 tickets per tour, so arrive early to make sure to get in. Entrance in the first door on the right after crossing Riksbron.

Parliament of Sweden on Foursquare

The Royal Armoury (Livrustkammaren) is located in the Royal Palace in

The Stockholm Palace (svenska. Stockholms slott) is the official

Stortorget (svenska. The Big Square) is a small public square in Gamla

The Riddarholmen Church (Swedish: Riddarholmskyrkan) is the burial 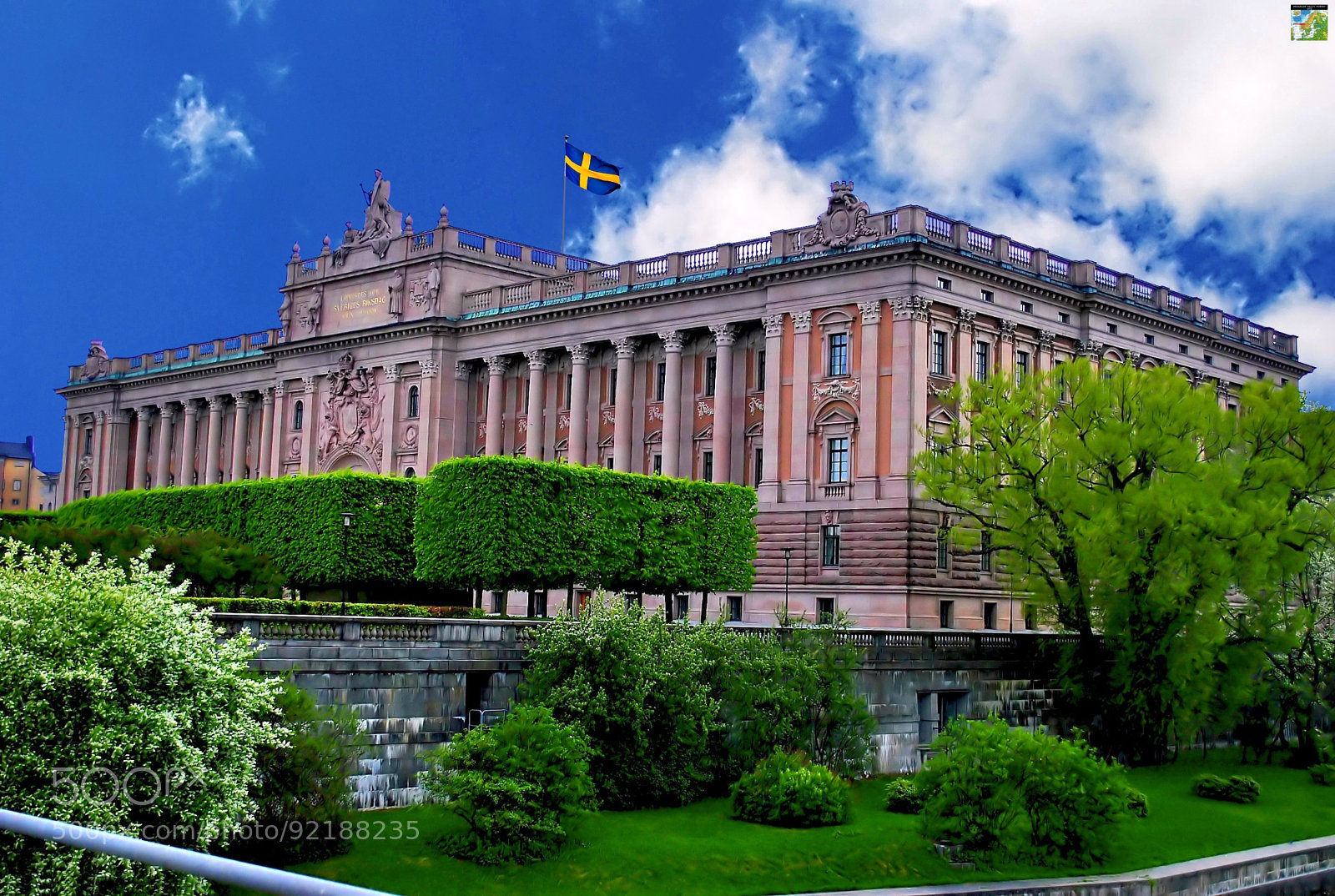 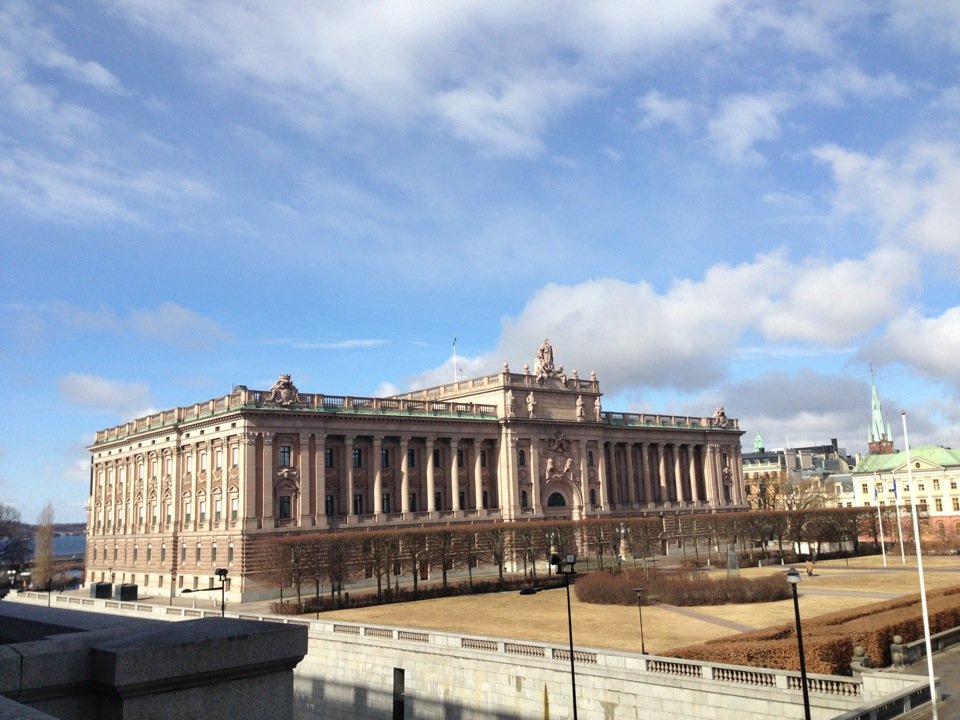 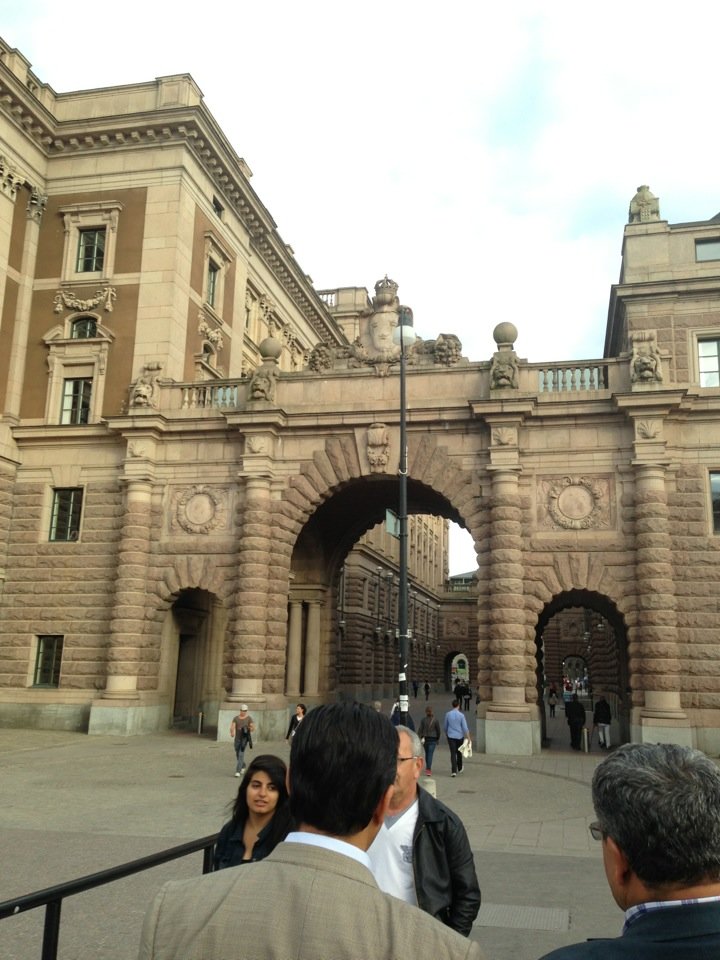 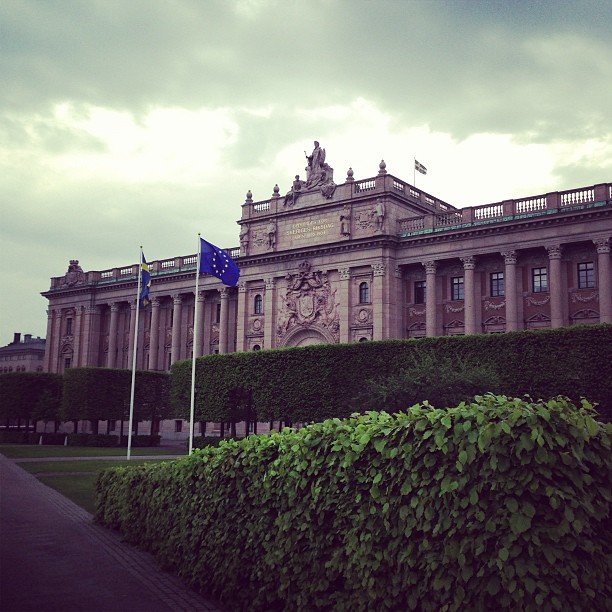 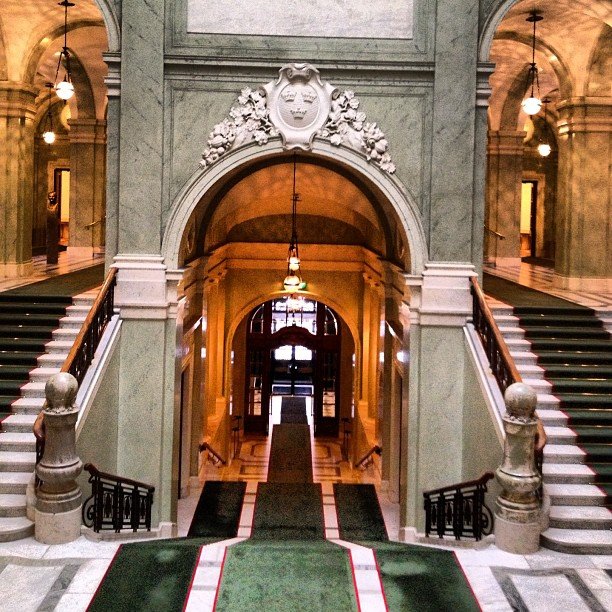 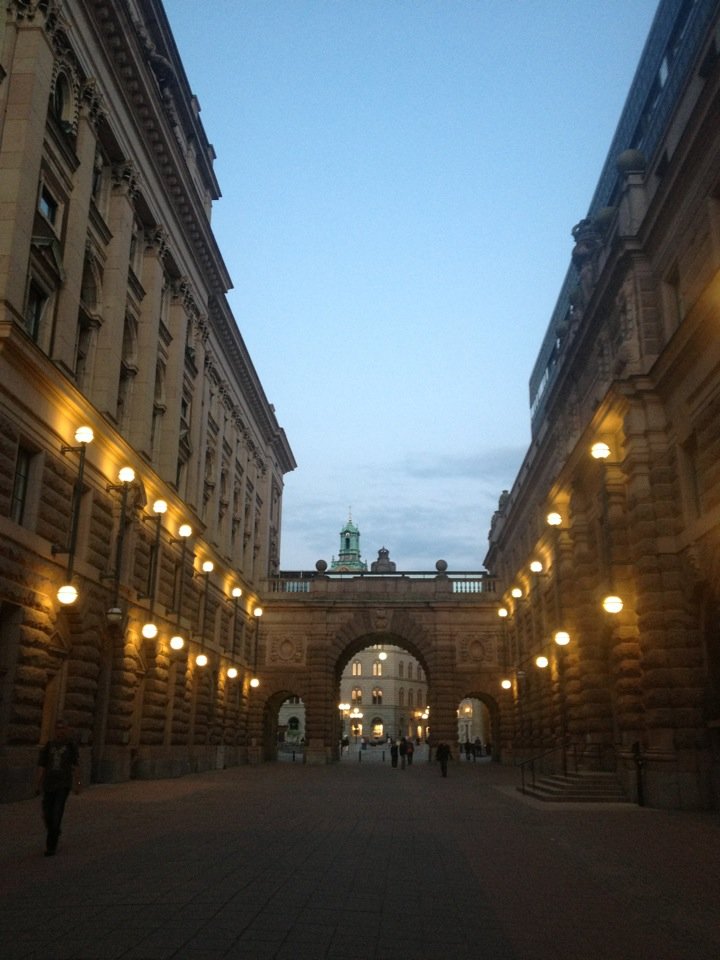 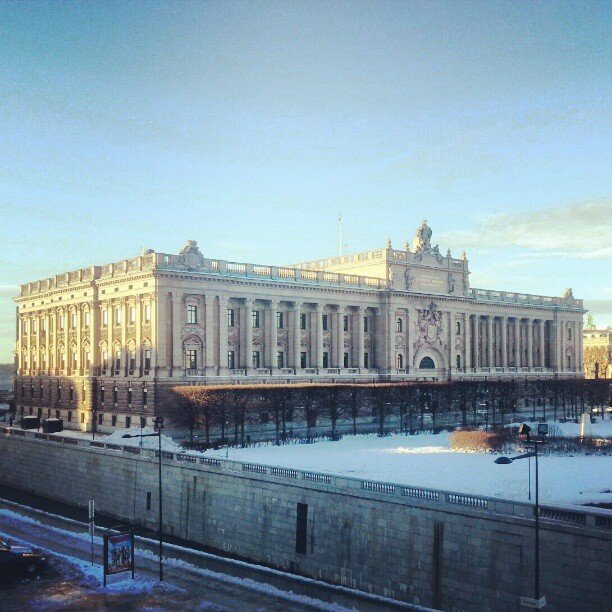 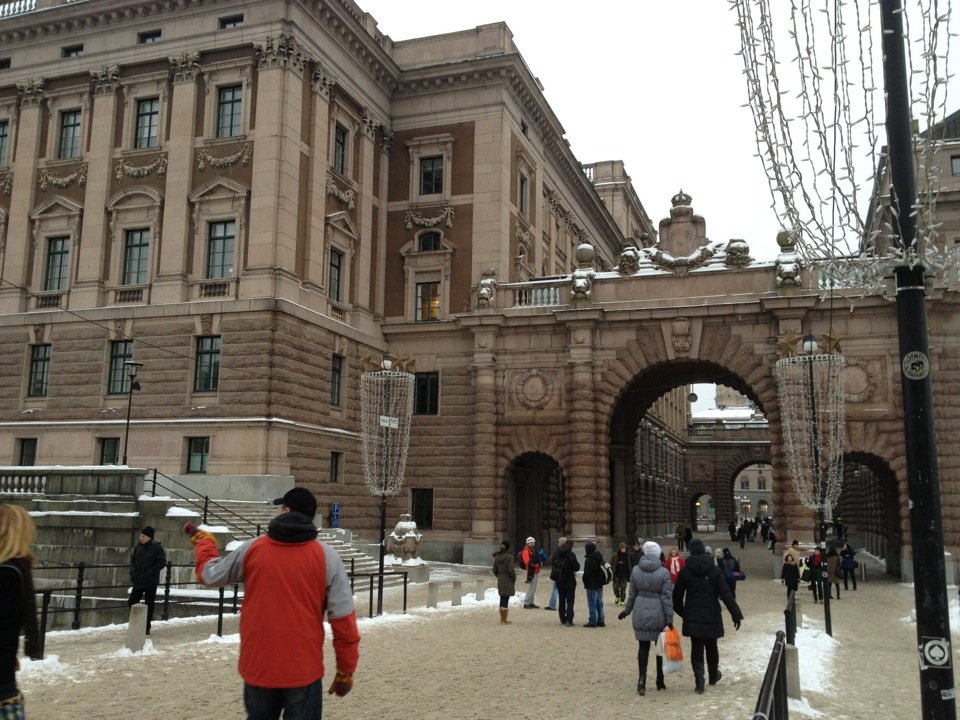 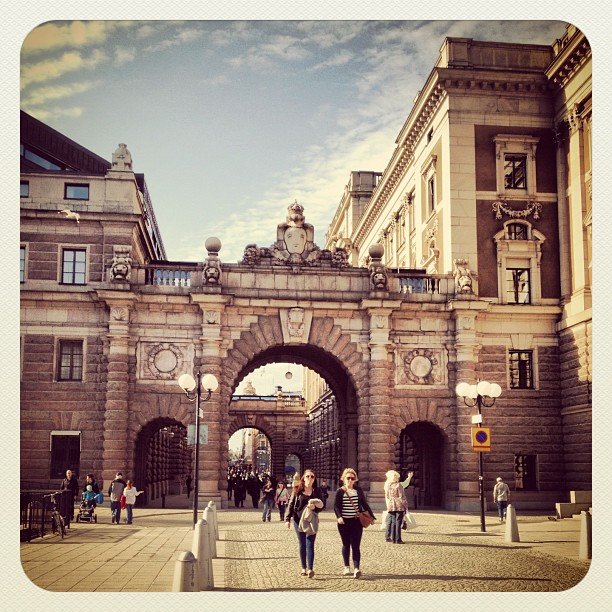 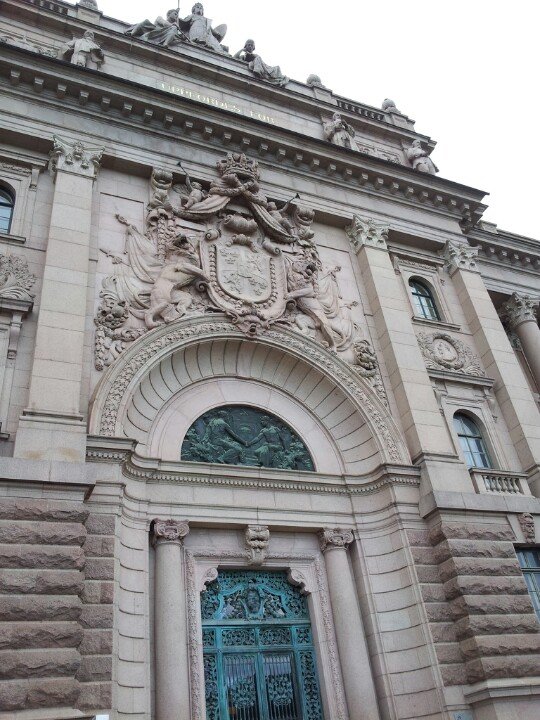 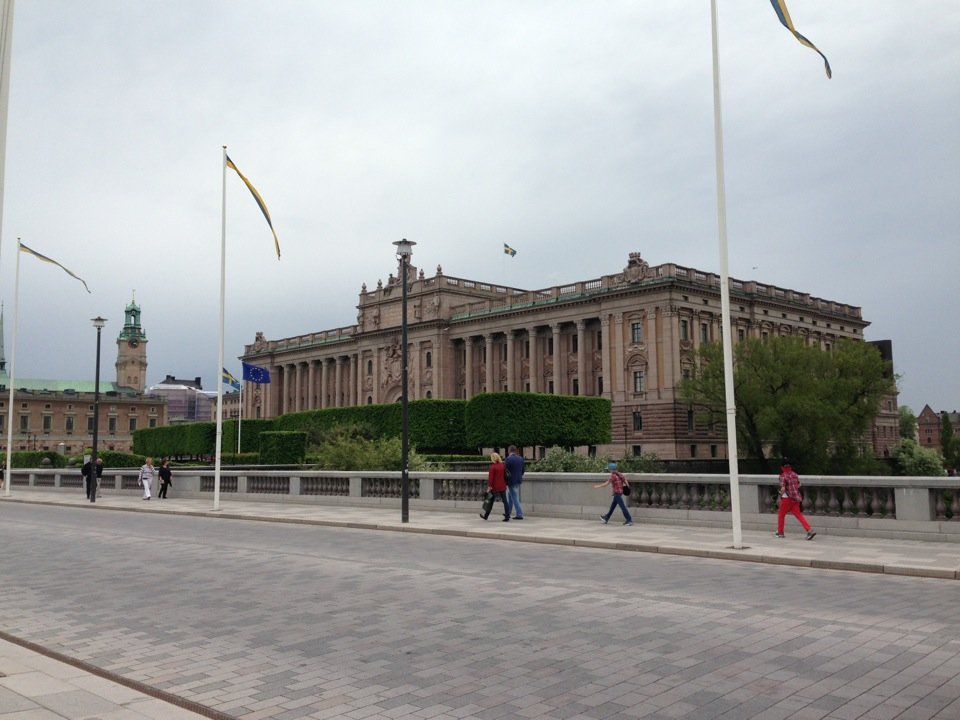 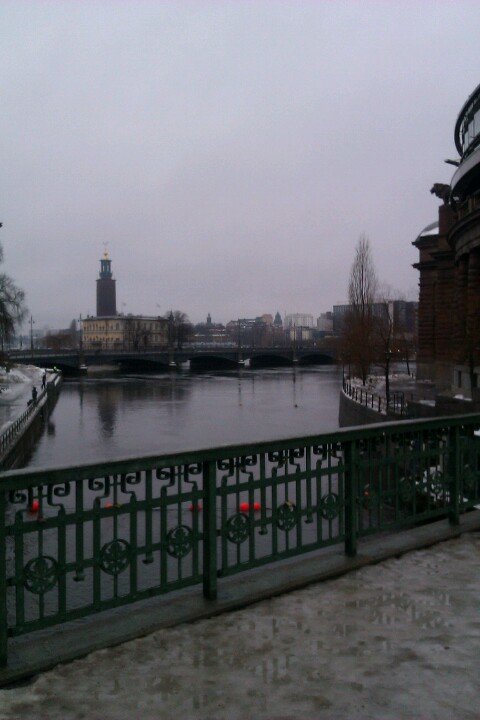 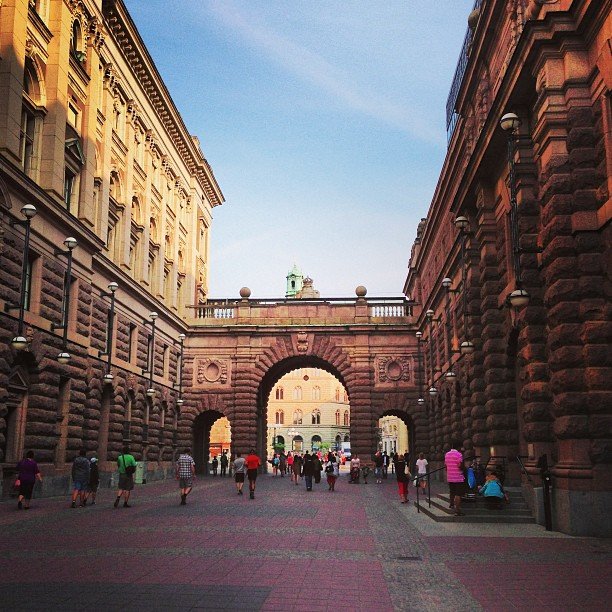 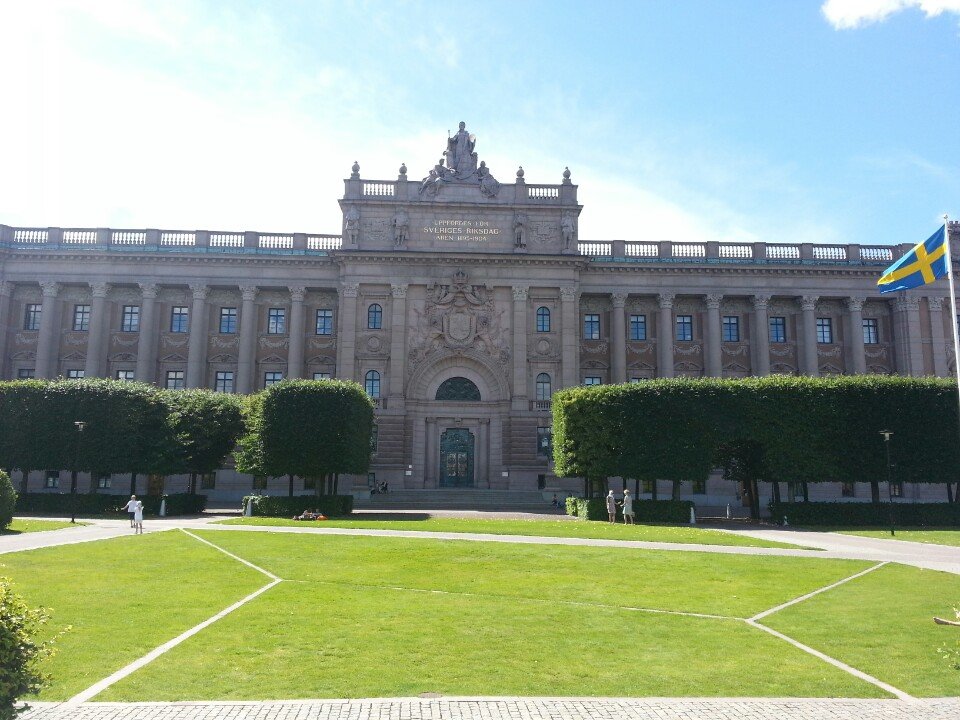 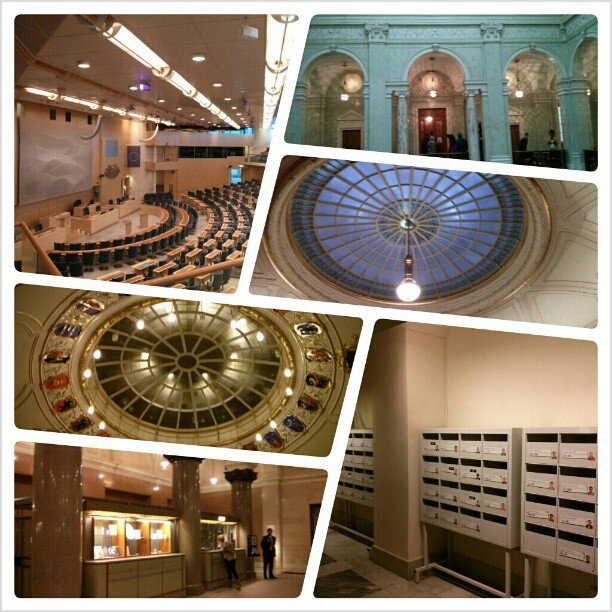 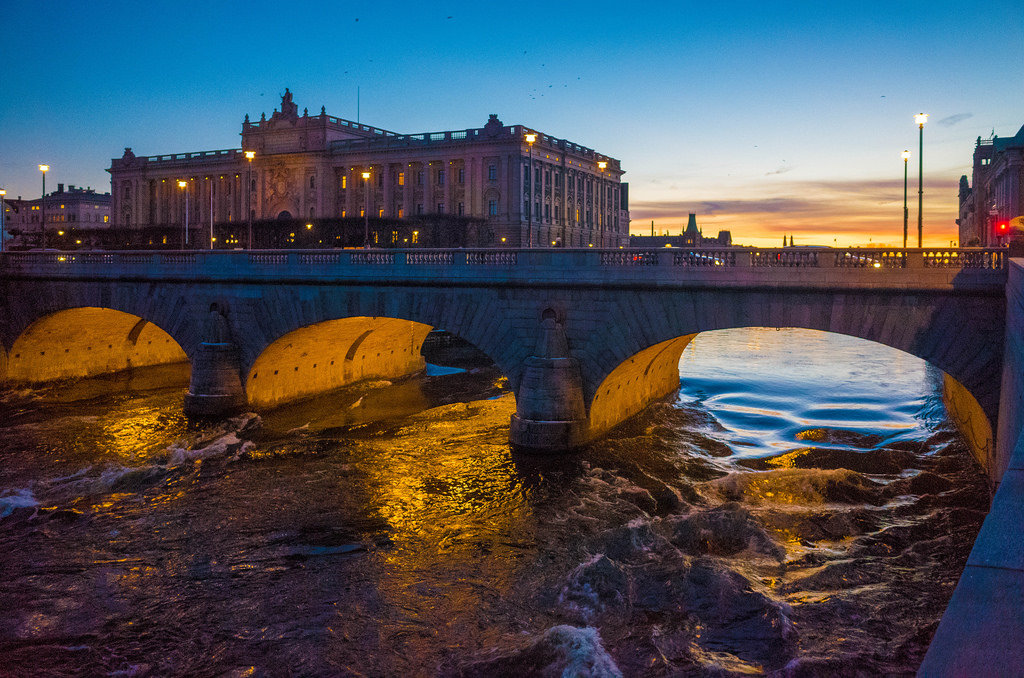 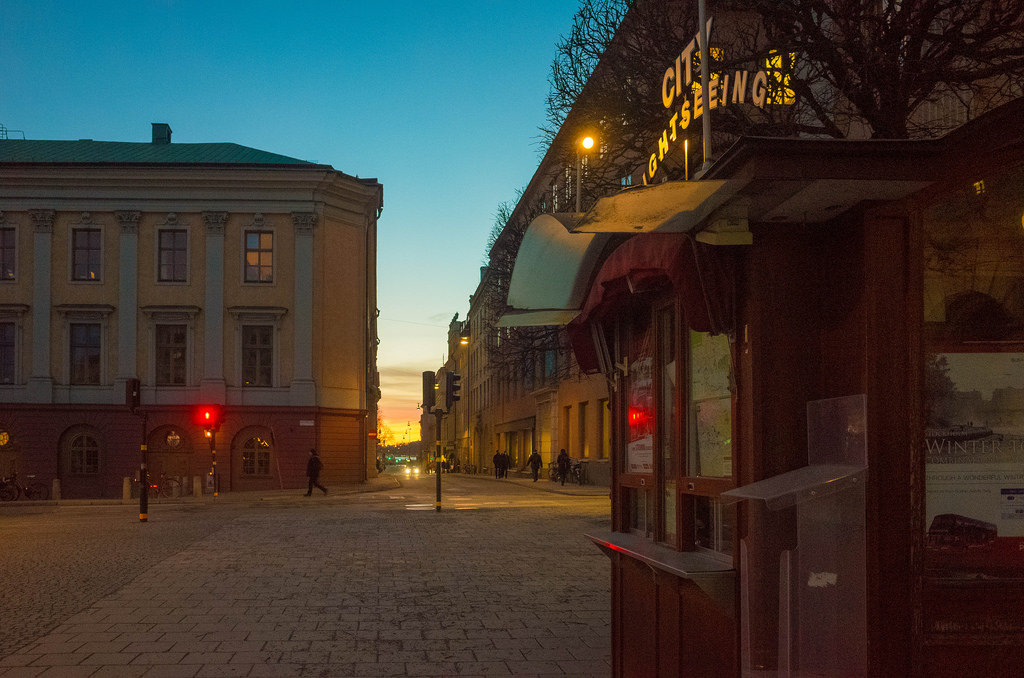