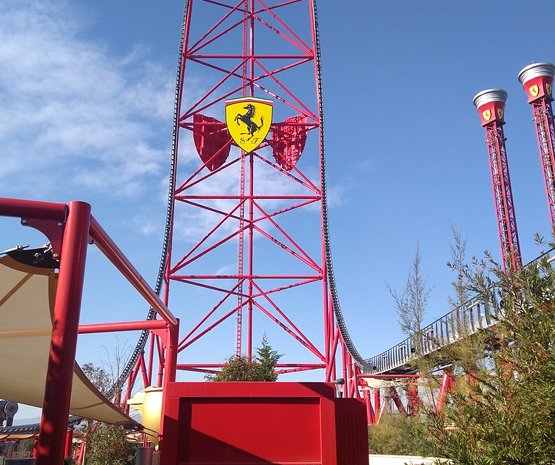 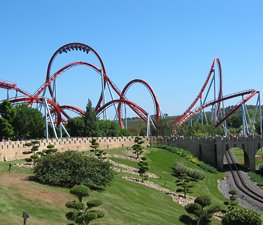 PortAventura is a theme park in site the resort of Portaventura, Tarragona, Catalonia, Spain, on the Costa Daurada ("Golden Coast"), approximately 1 hour from Barcelona. It was conceived and built as a joint effort by the Tussauds group (Alton Towers), Anheuser-Busch (Busch Entertainment Corporation) and Universal Studios. In 1997, Universal bought up most shares in the park and the park was rebranded as 'Universal's Port Aventura'. In 2000, two hotels and a water park were constructed, and the place was further rebranded as 'Universal Mediteranea'. In 2004, NBC Universal (Universal Studios' parent) sold all interest in PortAventura. It is now owned and operated by the Caixa banking group's investment vehicle Criteria, but as of 2005 the Universal name has been dropped from the branding, and the resort was once again named 'PortAventura' (the space in the name is deliberately left out for trademark reasons). It is the biggest resort in the south of Europe. It has 2 airports within 30 minutes of it, including Reus Airport. There is a train station for Port Aventura which has connections to Barcelona and Salou.

The park is divided into the following sections:

Mediterrania is the main entrance area of the park, it only features two rides but there are several restaurants and shops reproducing a typical coastal town in Catalonia. During the months of July and August, the lake is the site of Fiestaventura, a show featuring fireworks and floats representing each of PortAventura's 4 other "worlds". The rides are:

Themed as an old wild west town, this area features many western buildings and sculptures.

The area boasts 9 attractions which makes it the biggest area in the park, these include: water rides; Silver River Flume and Grand Canyon Rapids which allows guests to squirt riding guests with water; and smaller rides including a wild west version of Tea cups and Dodgems.

The area is also home to two roller coasters:

In some ways similar to the wild west area, this area however is somewhat more thrilling than the others in the park. It is themed around Mayan Mexico.

The main attractions include:

China is home to the biggest ride in the park - Dragon Khan, with 8 inversions this is one of the most thrilling rides in Europe and was the former holder of the biggest coaster in Europe. The ride built by Bolliger & Mabillard (B&M) opened on May 2, 1995 and was one of the two roller coasters that Port Aventura had when it opened.

Other rides in China include: Cobra Imperial, Tea Cups and Fumanchu.

All the area is dominated by the great chinese wall.

The Polynesian area is different from the other rides in the park as it is a more laid back area with less thrilling rides.

The two main rides in the area are:

- La Mina del Diablo is a horror maze situated in the area of Mexico since 2006. Enter in a forbidden mine in Mexico.

- La Selva del Miedo is the largest maze in Europe. The area Polynesia close at 19:00 to accommodate this event.

- Horror in Penitence is the home of terrifying zombies. This walk is themed on a ghost town.

- Psycho circus is 3-D maze under Stampida. This walk is based on a circus.

PortAventura is one of the largest theme resort in Europe and has a master plan that will make possibly one of the largest tourist attractions in Europe. The park is followed by hotels, water parks, golf courses, beach clubs ... to fill the approximately 825 hectares of land owned by the park.

The investment is around 1,500 million euros and will involve 18,500 employees. La Caixa made a fusion of 4 who went to their companies manage the expansion plan. In this way, PortAventura of capital rose from 126 to 175 million euros.

It has officially announced the construction of "CityWalk (shopping and leisure) PortAventura. Port Aventura is known as the Village. The new shopping and leisure center will be 9.5 ha (three times Caribe Aquatic Park). Will be on the grounds of the resort of PortAventura from the railway station and the parking of the Hotel PortAventura, the spaces in the master plan and classified Boulevard LA. Will respect and maintain the image, architecture and operations typical of the leisure park will be located.

This new space will offer visitors and residents of the complex near the area, 5 ha for leisure, shopping and restaurants plus a further 5 ha for 2,000 parking spaces, green spaces and Multiadventures. Worth about 185 million euros is expected to open in 2010, when the park plans to open all year, and continue with several projects which are currently underway, such as golf courses, the convention center, hotel and the new Gold River (currently under construction and is expected opening in 2009. The hotel offers the possibility of living in a village of the American gold rush.

Josef Nsiri
I recommend that you take a max gold pass. You'll be in the first row in the top 3 games and you won't have to wait much on the line for 7 other games. It's an amazing world and an extreme sensation

Luis Castro
One of the best theme parts I have been. I have visited almost all the parks in Orlando, FL and this one gives a really good taste of those. Even exceeds in the rides department. It's a great place.

Tero Angeria
Superb rides. 27 € for Express queue is well worth spending, if you really like the rides. Nice different themes in different parts. We were here in April, which was great as the park was not too busy

Roman Gudkov
Absolutely must see! Take tickets for two days: first day, have a walk, see around, note what you liked the most, on a second day buy express pas and take a ride on all attractions without line!

Olga Vishnevskaya ????
Encourage you to try Shambala, it's not that scary, you will definitely enjoy the ride ????

Jenny Stewart
One of the best theme parks I've been to for rides. It's worth getting the evening ticket (7pm - midnight) during the summer as the queues are much shorter and it means a hefty discount.
Load more comments
foursquare.com
8.7/10
✅i©E➿TE @ditrelis, Ilya Ableev and 156,469 more people have been here
I've been here
Add to wishlist

The Monastery of Santa Maria de Poblet is a Cistercian monastery,

Ametlla de Mar Observatory is an astronomical observatory situated in

Ascó Nuclear Power Plant is a nuclear power station at Ascó in Spain. 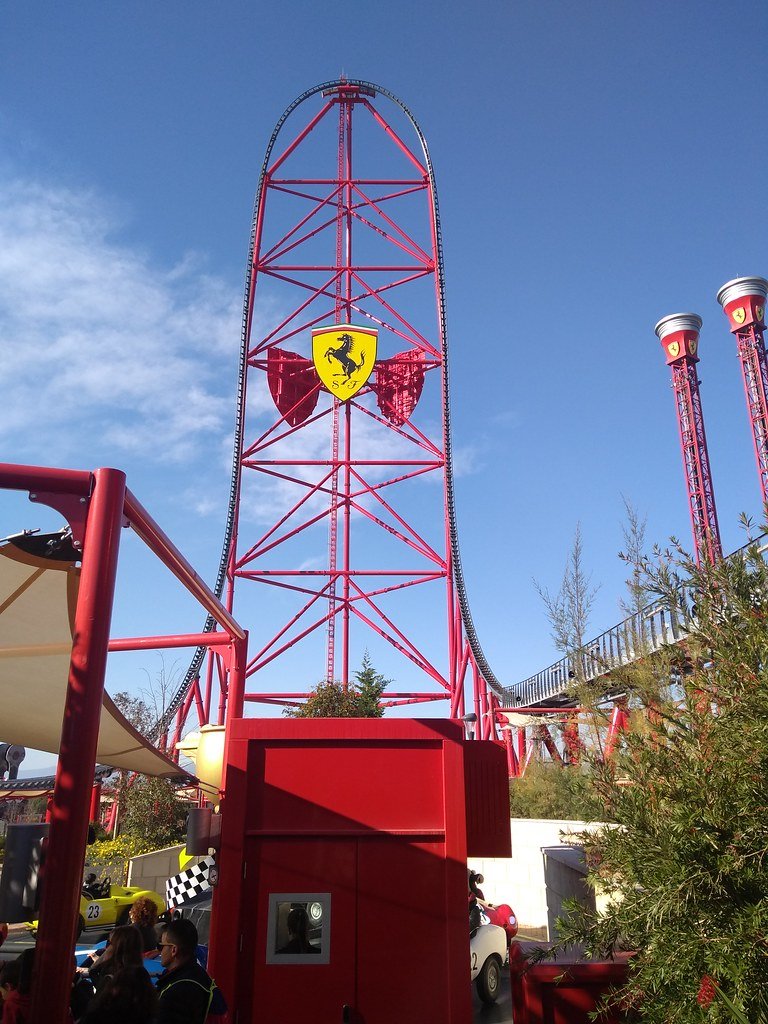 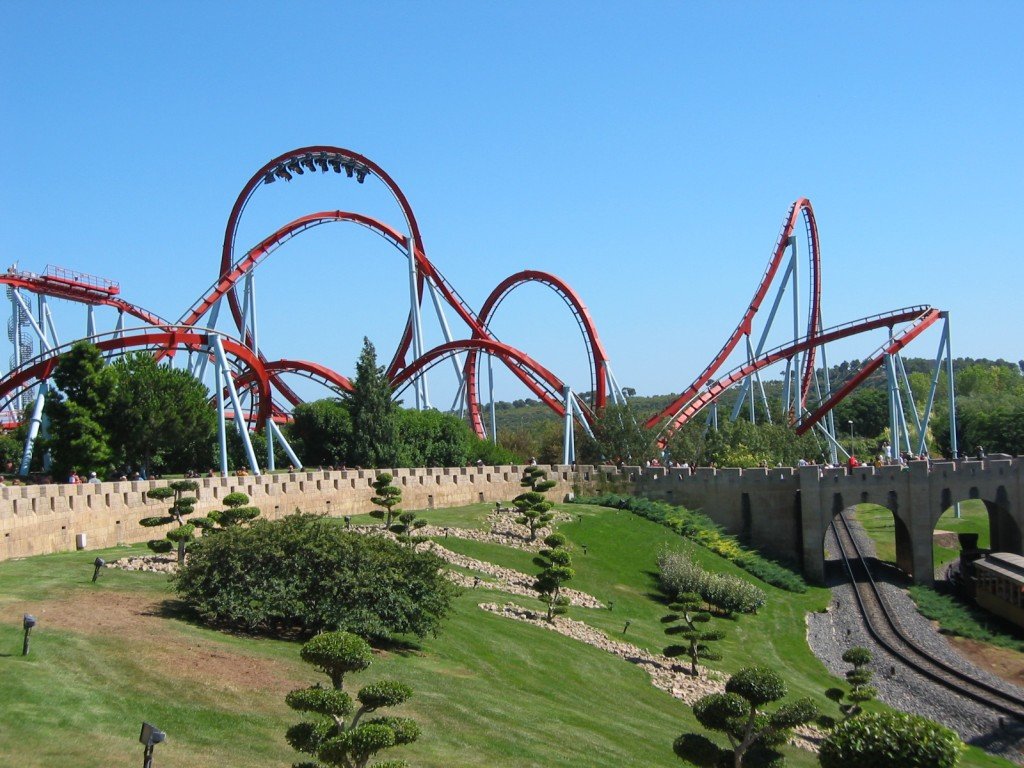 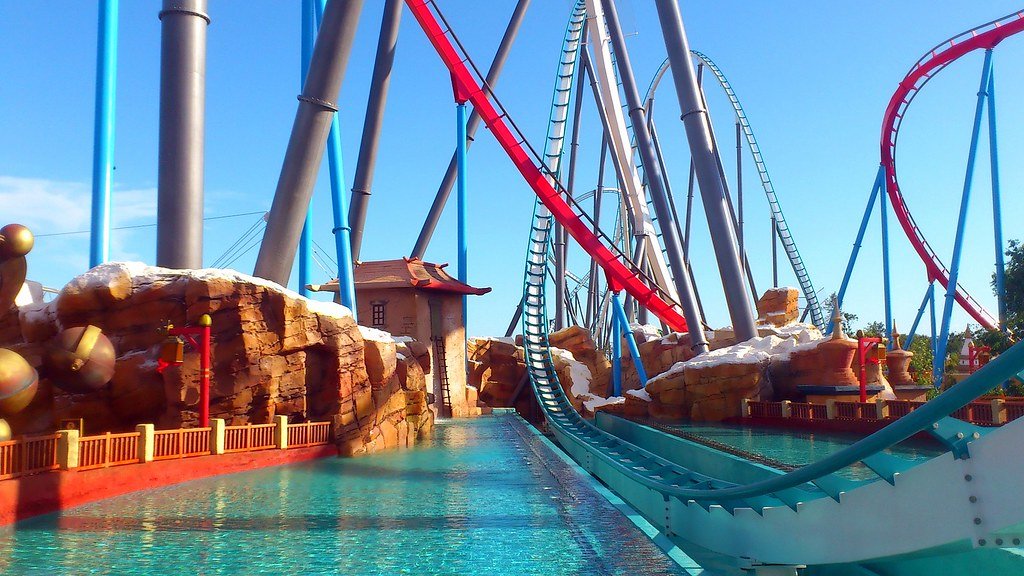 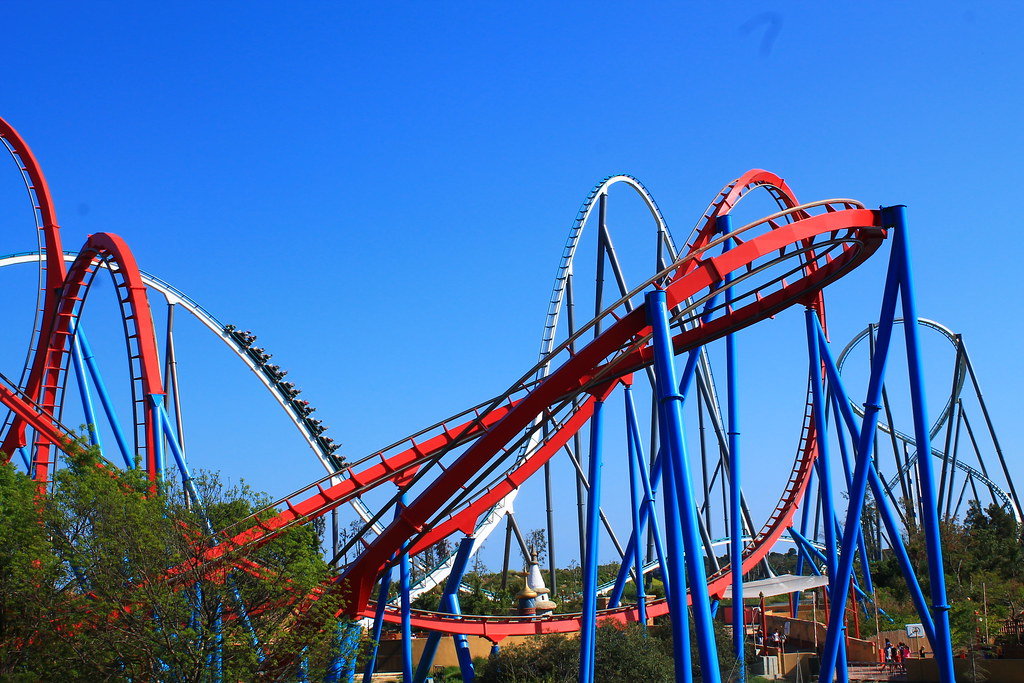 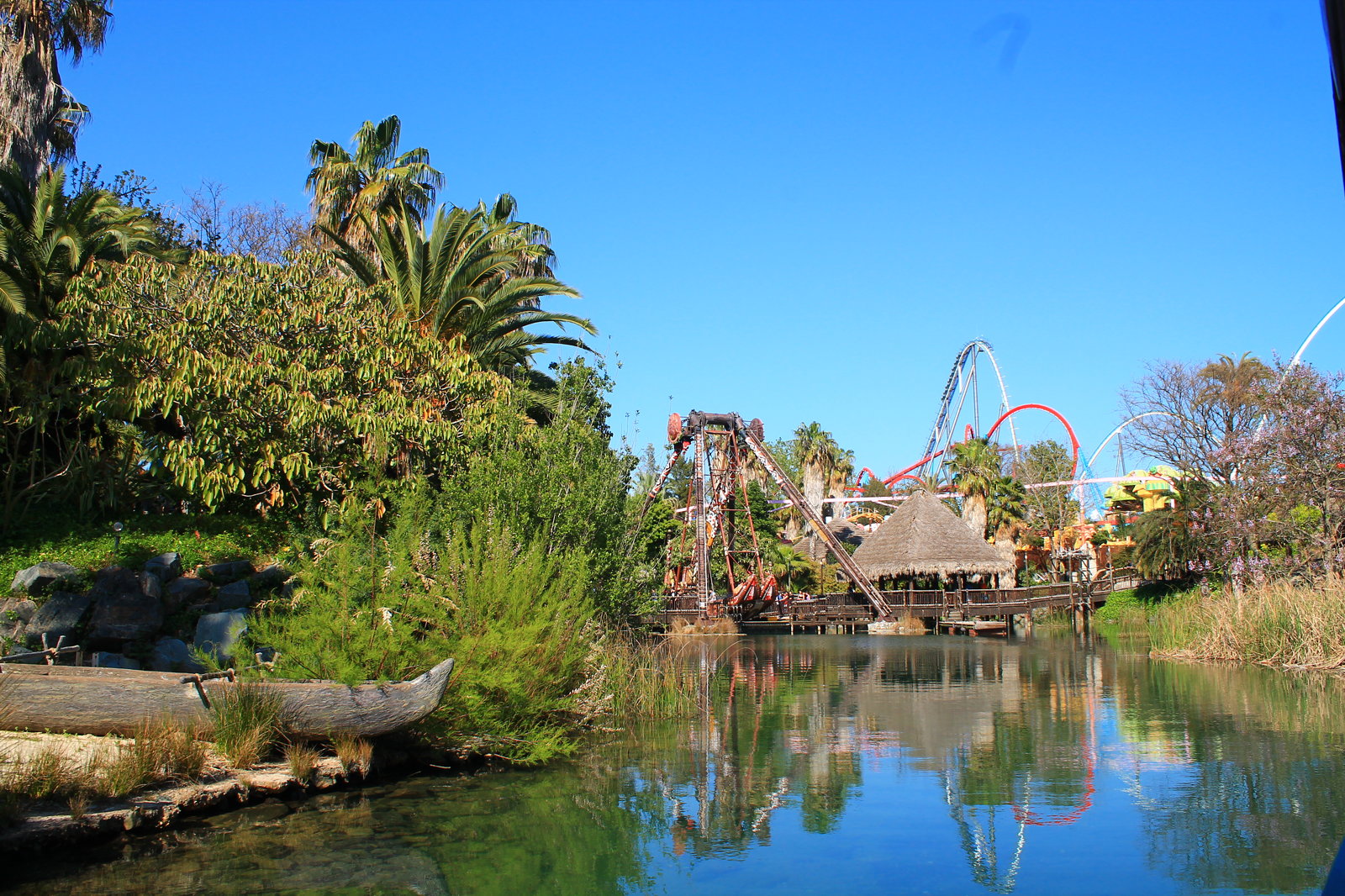 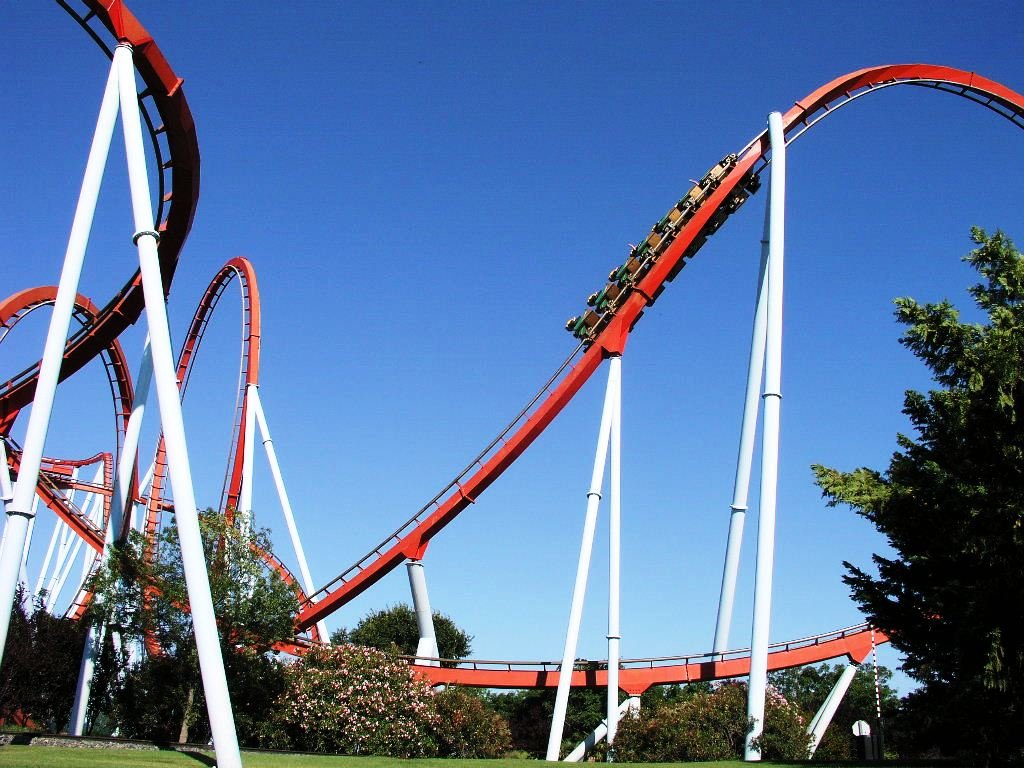 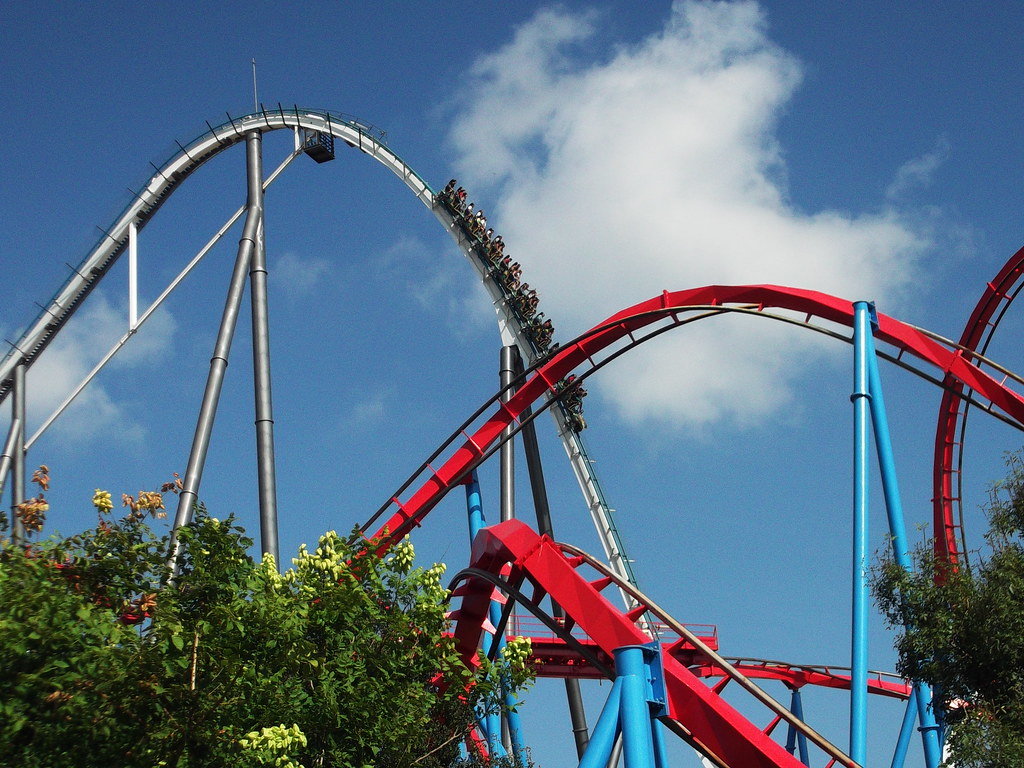