×
What are you looking for?
See all results
Castles in Подгорцы 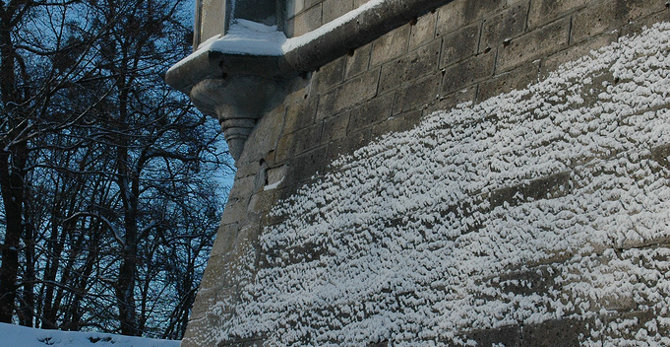 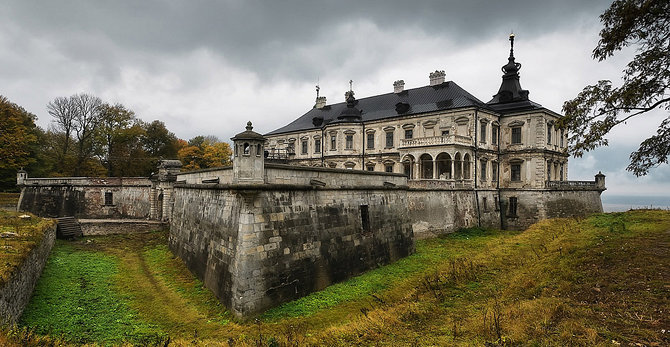 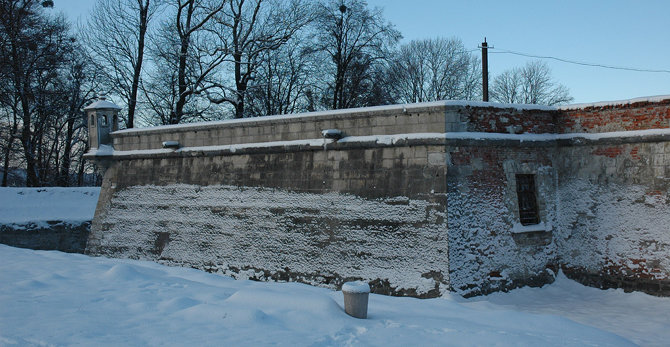 Pidhirtsi Castle (українська. Підгорецький замок; polski. zamek w Podhorcach) is a residential castle-fortress located in the village of Pidhirtsi in Lviv Oblast (province) western Ukraine, located eighty kilometers east of Lviv. It was constructed by Guillaume Le Vasseur de Beauplan between 1635–1640 by order of the Polish-Lithuanian Commonwealth's Grand Crown Hetman Stanisław Koniecpolski, on the place of the older fortress. The castle was then part of the Kingdom of Poland and it is regarded as the most valuable of palace-garden complexes in the eastern borderlands (Kresy Wschodnie) of the former Polish-Lithuanian Commonwealth.

The structure, built with brick and stone, was designed in the characteristic palazzo in fortezza style. It is located on the northern side of the Woroniaki hills, standing at 399 meters above sea level, overlooking the Styr River valley, in a prominent location where it can be seen from great distances. The palace itself is built into the slope of the hill. In the 17th century, it was surrounded by vineyards and Italian-style paterre gardens, its wine celebrated by the poetry of Jakub Sobieski and Andrzej Morsztyn. Guarded by a moat and drawbridge, fortified walls with bastions and a set of iron cannons (some of which have been preserved to this day). The castle takes the form of an open square nearly 100 meters on a side, with three floors.

Its western part served as an official residency for guests; the eastern range was private, reserved for the owner and servants. Above the entrance gate, a marble plaque to this day bears a Latin inscription: "A crown of military labours is victory, victory is a triumph, triumph is rest." There also was a grange, a private zoo, vineyards, an apiary, a trout pond and a mill.

In its heyday under Jakub Ludwik Sobieski, the castle was richly furnished, with several halls and a library, and with gardens and parks around it. Next to the entrance was the Guardroom, then there was the knights’ room, filled with hussar equipment and numerous kinds of weaponry. There followed the suite of the Crimson Room, a Chinese Room, the Mirror Room, Yellow Room, Green Room (in which 106 paintings of the 18th century painter Szymon Czechowicz were kept) and a chapel. These rooms collected the names from the color of a trim or from what was kept in them.

Walls of all rooms were covered with paintings, portraits (around 200 of them), wallpapers; floors were made of marble tiles. Each room also had a marble fireplace. Among the stylish furnishings, there were numerous examples from the booty taken by Stanisław Koniecpolski during wars with the Turks and Tatars, mostly Persian rugs and Turkish tents. In the library, there was an archive of the Koniecpolski and Rzewuski family. King Wladyslaw IV Vasa and his French wife Ludwika Maria Gonzaga, were impressed by the complex, when they visited it in early 1646. Soon after their visit, Stanisław Koniecpolski died.

It has not been established who designed the complex, that, most probably, was planned by Italian architect Andrea del Aqua, who also designed the fortress in nearby Brody for bellicose Koniecpolski. Hetman Koniecpolski wrote in his memoirs that he wanted to own a place for relaxation, but the castle location made it impossible. In 1648 it was attacked by Ukrainian Cossacks during Khmelnytskyi Uprising, although they could not capture the complex, which proved its fortress characteristics. Three years later the Cossacks returned and failed again. After this event, Koniecpolski's son Aleksander repaired damages and strengthened the fortification improving security credited to resisting numerous Tatar and Turkish inroads that took place in a period of second half of 17th century.

In 1682, Stanisław Koniecpolski, grandson of the original builder and owner, decided to devise the castle with surrounding estates to Jakub Ludwik Sobieski. Five years later, Jakub Sobieski coming back from the campaign against the Ottoman Turks at Kamieniec Podolski hosted his parents, King Jan III Sobieski and his French wife Marie Casimire Louise, in the castle. A description of the Podhorce complex made by one of Sobieski's courtiers, François d’Aleyrac, has been preserved: "This castle is undoubtedly the most beautiful in Poland, and in other countries, it would also be regarded unique."

In 1725 Konstanty Sobieski, younger brother of Jakub, sold the castle to the Great Crown Hetman Stanislaw Rzewuski. After hetman Rzewuski's death, the complex was inherited by his son, Wacław, who also was the owner of the nearby Olesko Castle. Wacław Rzewuski made Podhorce his permanent residence. He ordered that a third floor to be added as well as a church (1788); he opened a theater.

Wacław Rzewuski was vividly interested in all things connected to King Jan III Sobieski. He purchased such items as Sobieski's sword used in the Battle of Vienna, booty taken by the king after the battle as well as a marble table on which, according to the legend, Sobieski was baptized . In 1767 Rzewuski went to Warsaw to participate in the debates of the Sejm. Arrested by the Russians and sent to Kaluga, he never returned to Podhorce. After the Partition of Poland, 1772, the castle became part of Austria remaining in the ownership of Rzewuski family ( Seweryn Rzewuski and his descendants), although precious collections were partially auctioned by the Austrian-imposed administrator, and the grand interior damaged when Wacław was imprisoned by Russians.

Until 1869 the complex still belonged to the Rzewuski family, here they hosted emperor Franz Josef I, and here Euzebiusz Slowacki, the father of Juliusz Slowacki was born. Last male descendant of hetman Wacław Rzewuski, count Leon Rzewuski, being childless, devised the castle to prince Wladyslaw Sanguszko.

During World War I, the castle was captured by the Russians, who did not destroy it, but looted most of the precious items from it. In the summer of 1915 Pidhirsti became headquarters of the Fifth Austrian-Hungarian Corps. As it was located on the front line, threat of destruction by Russian artillery was real. Fortunately, General Aleksei Brusilov decided to spare the complex, however it was ransacked again by the Russians. Russian soldiers destroyed its interior: walls, tiles and floors. In the Polish-Soviet War the castle was damaged again, and after the conflict, it became part of the Tarnopol Voivodeship (Second Polish Republic), belonging to prince Roman Sanguszko, who was the last Polish owner of the castle.

In the Polish September Campaign of 1939, following Nazi and Soviet aggression on Poland, anticipating loss of property, Prince Sanguszko packed most of the valuables, took them to Romania, and later to São Paulo in Brazil, where he created a fund. After World War II, Soviet authorities opened in the complex a Tuberculosis sanitarium. In February 1956 the castle almost completely burned down, including valuable paintings; the fire lasted for three weeks, leaving behind only walls and $12 million in damages. In 1997 it was purchased by the Lviv Gallery of Painting, which turned it into a museum.

The castle, despite all the damages rendered during the Communist rule, always was an interesting and attractive architectural object. Several movies were made in Pidhirtsi, including shots of Potop.

When Ukraine regained independence from the Soviet Union, the castle was planned to be revamped and made into a presidential residence. This never came to be true, and eventually it was placed under the jurisdiction of the Lviv Arts Gallery. Currently, part of the Rzewuski family collection is kept in the Lviv Historical Museum and Lviv Art Gallery. Some artifacts are also kept in museums in Tarnów and Kraków. The Lviv Gallery of Arts is trying to restore the castle to its historical look, however lack of funds has delayed most restoration work, and progress is only being made slowly. 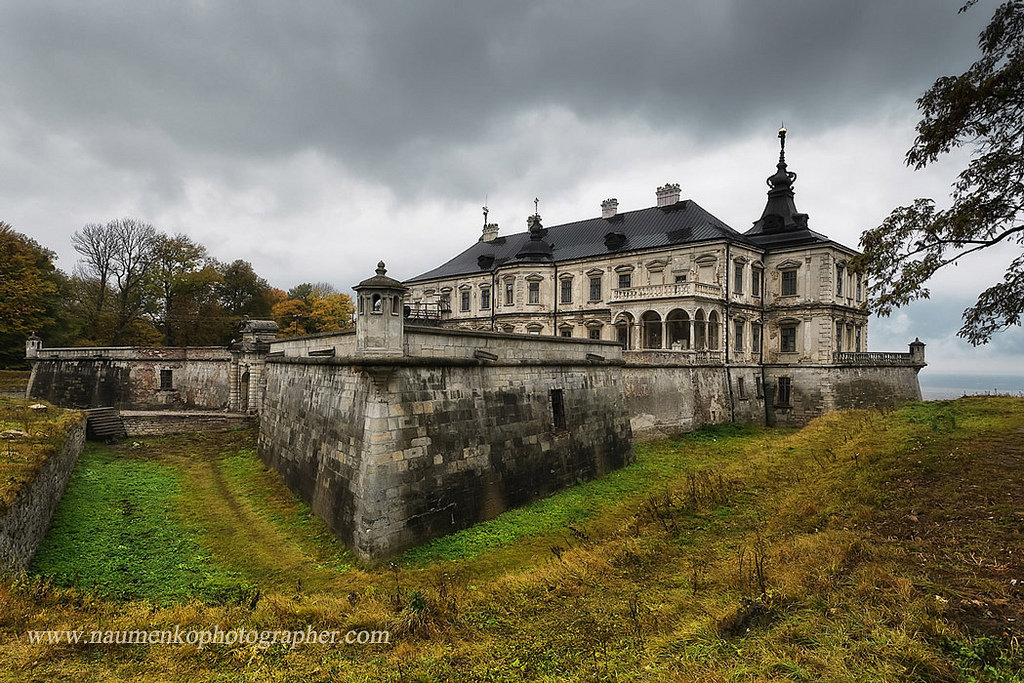 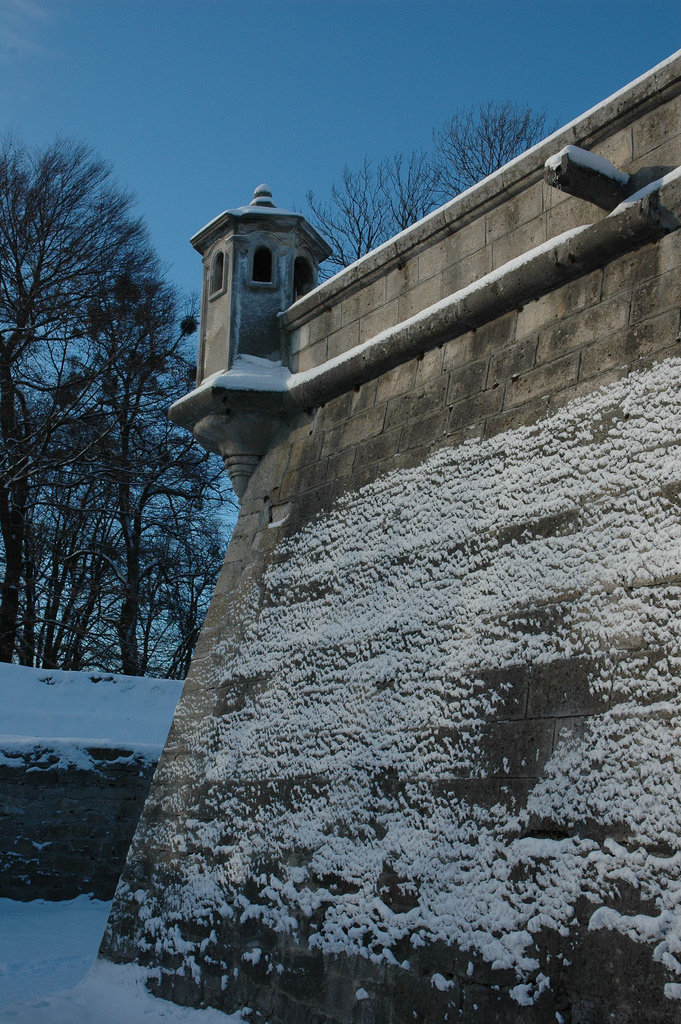 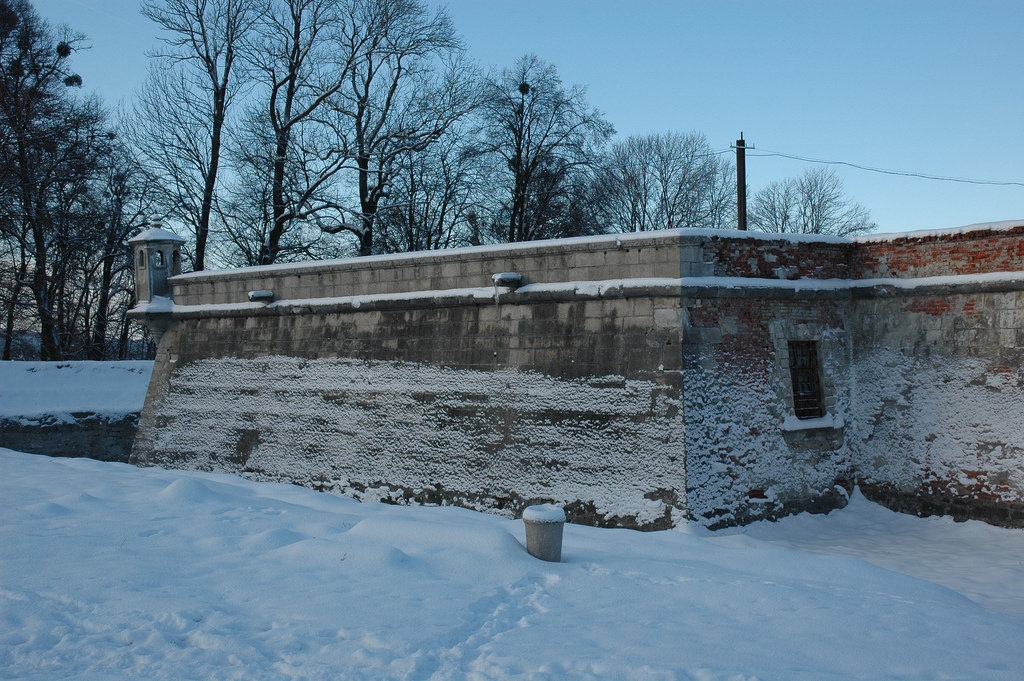 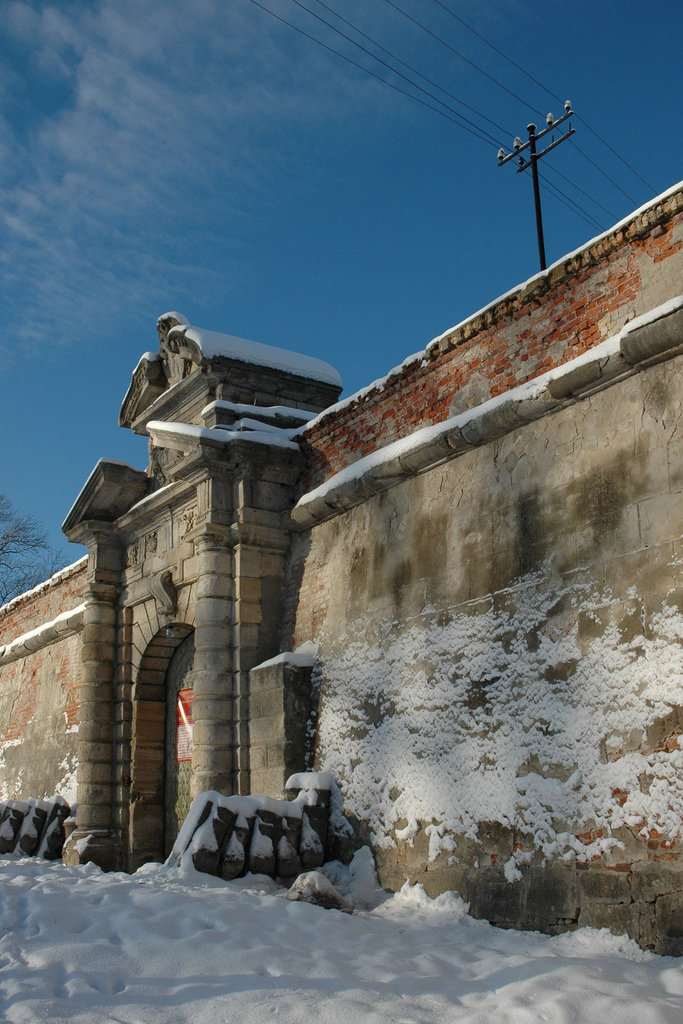 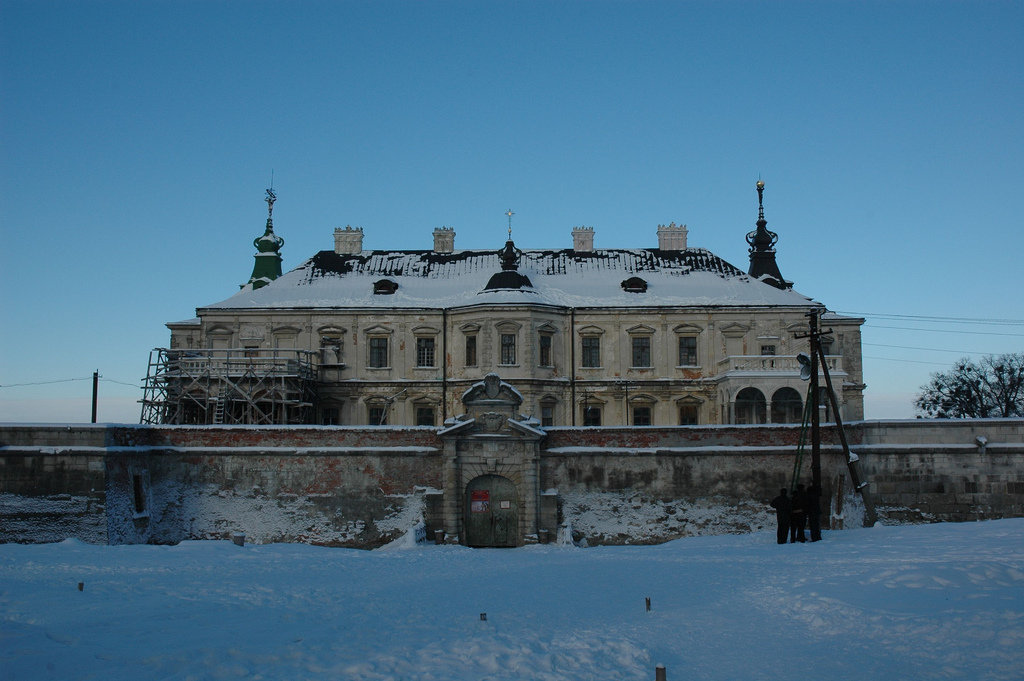 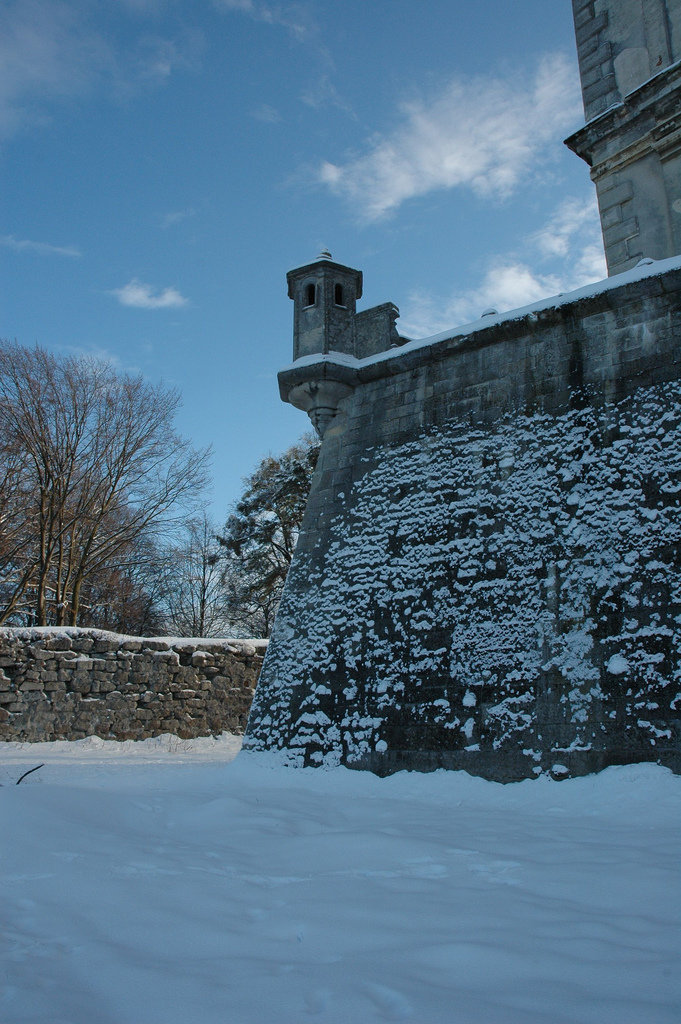 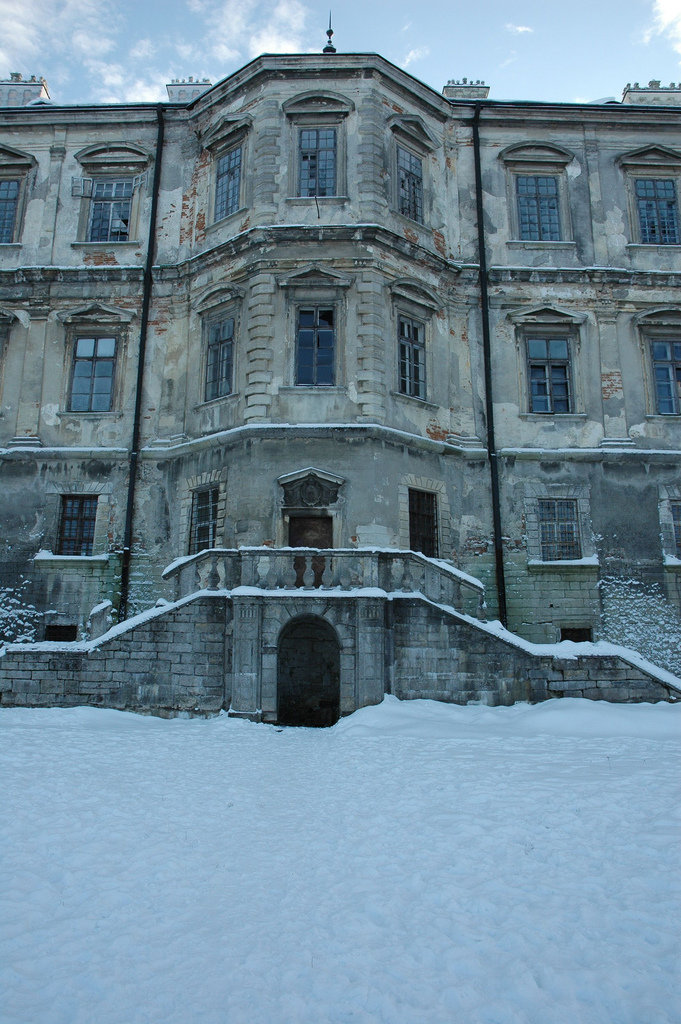