×
What are you looking for?
See all results
Art museums and galleries in Paris

The Palais du Louvre in Paris, on the Right Bank of the Seine is a former royal palace, situated between the Tuileries Gardens and the church of Saint-Germain l'Auxerrois. Its origins date back to the medieval period, and its present structure has evolved in stages since the sixteenth century.

The Louvre gets its name from a Frankish word leovar or leower, signifying a fortified place, according to the French historian Henri Sauval (1623-1676). It was the actual seat of power in France, until Louis XIV moved to Versailles in 1682, bringing the government perforce with him; the Louvre remained the formal seat of government to the end of the Ancien Régime in 1789.

The Palais du Louvre was originally constructed as a fortress, built in the 12th century by King Philippe Auguste along with the City's first enclosure wall to defend the banks of the Seine river against invaders from the north. The fortress had at its center a cylindrical tower: the Donjon, or the Keep. (Archaeological discoveries of the original fortress are now part of the Medieval Louvre exhibit in the Sully wing of the museum.)

Philippe Auguste's fortress of 1190 was not a royal residence but a sizable arsenal comprising a moated quadrilateral (seventy-eight by seventy-two meters) with round bastions at each corner, and at the center of the north and west walls. Defensive towers flanked narrow gates in the south and east walls. At the center of this complex stood a keep, the Grosse Tour (fifteen meters in diameter and thirty meters high). Two inner buildings abutted the outer walls on the west and south sides.

The Louvre was renovated frequently through the Middle Ages. Under Louis IX in the mid-1200s, the Louvre became the home of the royal treasury. The castle soon gained a dual function: in addition to its protective role, it became one of the residences of the king and the court, along with the chateau de Vincennes, the Hotel Saint-Pol in the Marais and the palace of the Île de la Cité.

The fortress was enlarged and beautified in the 14th century by Charles V, making it the most celebrated royal residence in Europe of its time. Charles V began the enlargement of the Louvre in 1358, but his work was ruined in the course of the Hundred Years War and demolished in the 1500s by François I, to make room for a new structure built in the Renaissance style.

Beginning in 1546, after returning from his captivity in Spain, King Francis I of France employed architect Pierre Lescot and sculptor Jean Goujon to remove the keep and modernize into a Renaissance style palace. Lescot had previously worked on the châteaux of the Loire Valley and was adopted as the project architect. The new plan consisted of a square courtyard, with the main wing separated by a central staircase, and the two wings of the sides comprising a floor. Lescot added a ceiling to King Henry II's bedroom (Pavillon du Roi) that departed from the traditional beamed style, and installed the Salle des Caryatides, which featured sculpted caryatids based on Greek and Roman works. Art historian Anthony Blunt refers to Lescot's work "as a form of French classicism, having its own principles and its own harmony". Francis acquired what would become the nucleus of the Louvre's holdings; his acquisitions included Leonardo da Vinci's Mona Lisa.

The death of Francis I in 1547, however, interrupted the project. The architect Androuet du Cerceau also worked on the Louvre.

In 1564 Catherine de' Medici directed the building of a château to the west called the Palais des Tuileries, facing the Louvre and the surrounding gardens. The Palace closed off the western end of the Lourve courtyard. Catherine then took over the restoration of the entire palace. Her architect Philibert de l'Orme began the project, and was replaced after his death in 1570 by Jean Bullant.

House of Bourbon and After

The Bourbons took control of France in 1589. During his reign (1589-1610), Henry IV began his "Grand Design" to remove remnants of the medieval fortress, to increase the Cour Carrée's area, and to create a link between the Palais des Tuileries and the Louvre. The link was completed via the Grande Galerie by architects Jacques Androuet de Cerceau and Louis Métezeau.

More than a quarter of a mile long and one hundred feet wide, this huge addition was built along the bank of the Seine; at the time of its completion it was the longest building of its kind in the world. Henry IV, a promoter of the arts, invited hundreds of artists and craftsmen to live and work on the building's lower floors. (This tradition continued for another 200 years until Napoleon III ended it.)

In the early 1600s, Louis XIII razed the north wing of the medieval Louvre and replaced it with a continuation of the Lescot wing. His architect, Jacques Lemercier, designed and completed the wing by 1639 (subsequently known as the Pavillon de l'Horloge, after a clock was added in 1857.)

The Richelieu Wing was also built by Louis XIII, the building first being opened to the public as a museum on November 8, 1793 during the French Revolution. Louis XIII (1610-1643) completed the wing now called the Denon Wing, which had been started by Catherine de Medici in 1560. Today it has been renovated, as a part of the Grand Louvre Renovation Programme.

The Louvre under the Sun King

In 1659, Louis XIV instigated a phase of construction under architects Le Vau and André Le Nôtre, and painter Charles Le Brun. Le Vau oversaw the decoration of the Pavillon du Roi, the Grand Cabinet du Roi, a new gallery to parallel the Petite Gallerie, and a chapel. Le Nôtre redesigned the Tuileries garden in the French style, which had been created in 1564 by Catherine de' Medici in the Italian style; and Le Brun decorated of the Galerie d'Apollon. A committee of architects proposed on Perrault's Colonnade; the edifice was begun in 1668 but not finished until the 19th century.

Commissioned by Louis XIV, architect Claude Perrault's eastern wing (1665-1680), crowned by an uncompromising Italian balustrade along its distinctly non-French flat roof, was a ground-breaking departure in French architecture. His severe design was chosen over a design provided by the great Italian architect Bernini, who had journeyed to Paris specifically to work on the Louvre. Perrault had translated the Roman architect Vitruvius into French. Now Perrault's rhythmical paired columns form a shadowed colonnade with a central pedimented triumphal arch entrance raised on a high, rather defensive base, in a restrained classicizing baroque manner that has provided models for grand edifices in Europe and America for centuries. The Metropolitan Museum in New York, for one example, reflects Perrault's Louvre design. In 1678 the royal residence moved to Versaille and the Palais du Louvre became an art gallery.

The Louvre was still being added to by Napoleon III. The new wing of 1852-1857, by architects Louis Visconti and Hector Lefuel, represents the Second Empire's version of Neo-baroque, full of detail and laden with sculpture. In 1806 the construction of the Arc de Triomphe du Carrousel began, situated between the two western wings, commissioned by Emperor Napoleon I to commemorate his military victories, designed by architect Charles Percier, surmounted by a quadriga sculpted by Baron François Joseph Bosio, and completed in 1808.

In 1871 the Tuileries Palace was destroyed in the upheaval during the suppression of the Paris Commune. The western end of the Louvre courtyard has remained open since, forming the Cour d'honneur. Continued expansion and embellishment of the Louvre continued through 1876.

Grand Louvre and the Pyramids

The current Louvre Palace is an almost rectangular structure, composed of the square Cour Carrée and two wings which wrap the Cour Napoléon to the north and south. In the heart of the complex is the Louvre Pyramid, above the visitor's center. The museum is divided into three wings: the Sully Wing to the east, which contains the Cour Carrée and the oldest parts of the Louvre; the Richelieu Wing to the north; and the Denon Wing, which borders the Seine to the south.

In 1983, French President François Mitterrand proposed the Grand Louvre plan to renovate the building and move the Finance Ministry out, allowing displays throughout the building. American architect I. M. Pei was awarded the project and proposed a modernist glass pyramid for the central courtyard. The pyramid and its underground lobby were inaugurated on 15 October 1988. Controversial at first, it has become an accepted Parisian architectural landmark. The second phase of the Grand Louvre plan, La Pyramide Inversée (The Inverted Pyramid), was completed in 1993. As of 2002, attendance had doubled since completion.

Richard Y
Do not enter from the Pyramid, but from the Carrousel: the queue is shorter

GowithOh
Did you know? The Louvre is free for all on the first Sunday of each month!
Load more comments
foursquare.com

The Louvre Pyramid is a large glass and metal pyramid, surrounded by 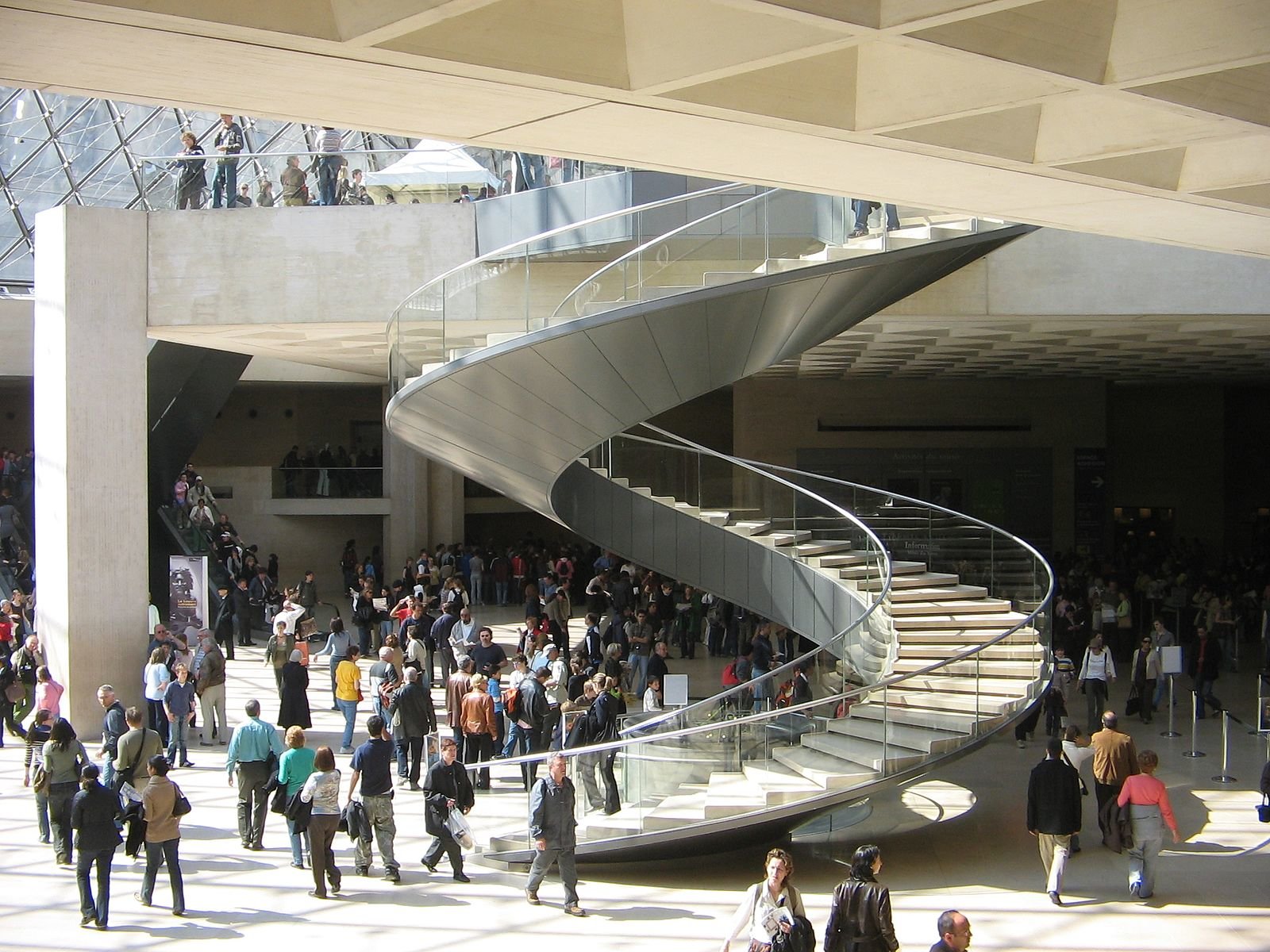