×
What are you looking for?
See all results
Opera houses in Paris

The Palais Garnier, also known as the Opéra de Paris or Opéra Garnier, but more commonly as the Paris Opéra, is a 2,200-seat opera house on the Place de l'Opéra in Paris, France. A grand landmark designed by Charles Garnier in the Neo-Baroque style, it is regarded as one of the architectural masterpieces of its time.

The building is located in the IXe arrondissement and is served by the metro station Opéra.

Upon its inauguration in 1875, the opera house was officially named the Académie Nationale de Musique - Théâtre de l'Opéra. It retained this title until 1978 when it was re-named the Théâtre National de l'Opéra de Paris. After the opera company chose the Opéra Bastille as their principal theatre upon its completion in 1989, the theatre was re-named as the Palais Garnier, though its more official name, the Académie Nationale de Musique, is still sprawled above the columns of its front façade. In spite of the change of names and the Opera company's relocation to the Opéra Bastille, the Palais Garnier is still known by many people as the Paris Opéra, as have all of the many theatres which have served as the principal venues of the Parisian Opera and Ballet since its founding.

The Palais Garnier was designed as part of the great Parisian reconstruction of the Second Empire initiated by Emperor Napoleon III, who chose the Baron Haussmann to supervise the reconstruction. In 1858 the Emperor authorized Haussmann to clear the required 12,000 square metres of land on which to build a second theatre for the world renowned Parisian Opera and Ballet companies. The project was put out to open competition in 1861, and was won by the architect Charles Garnier (1825–1898). The foundation stone was laid in 1861, followed by the start of construction in 1862. Legend has it that the Emperor's wife, the Empress Eugénie, asked Garnier during the construction as to whether or not the building would be built in the Greek or Roman style, to which he replied: It is in the Napoleon III style Madame!

The construction of the opera house was plagued by numerous setbacks. One major problem which postponed the laying of the concrete foundation was the extremely swampy ground under which flowed a subterranean lake, requiring the water to be removed by eight months of continual pumping. More setbacks came as a result of the disastrous Franco-Prussian War, the subsequent fall of the Second French Empire, and the Paris Commune. During this time construction continued sporadically, and it was even rumoured that construction of the opera house might be abandoned.

By late 1874 Garnier and his massive workforce completed the Palais Garnier, much to the celebration of Paris. The Palais Garnier was formally inaugurated on January 15, 1875 with a lavish gala performance. The ball consisted of the third act of Fromental Halévy's 1835 opera La Juive, along with excerpts from Giacomo Meyerbeer's 1836 opera Les Huguenots. The ballet company performed a Grand Divertissement staged by the Paris Opéra's Maître de Ballet en Chef Louis Méranté, which consisted of the celebrated scene Le Jardin Animé from Joseph Mazilier's 1867 revival of his ballet Le Corsaire, set to the music of Léo Delibes.

In 1896, one of the counter-weights for the grand chandelier fell, killing one. This, as well as the underground lake, cellars and other elements of the Opera House, inspired Gaston Leroux in 1909 to write his classic Gothic novel, The Phantom of the Opera.

In 1969 the theatre was given new electrical facilities, and in 1978 part of the original Foyer de la Danse was converted into new rehearsal space for the Ballet company by the architect Jean-Loup Roubert. In 1994 restoration work began on the theatre, which consisted of modernizing the stage machinery and electrical facilities, while restoring and preserving the opulent décor and strengthening the frame and foundation of the building. The restoration was completed in 2006.

Although slightly smaller in scale than its predecessor, the Théâtre de l'Académie Royale de Musique, the Palais Garnier consists of 11,000 square metres (118,404 square feet), seats an audience of roughly 2,200 under a central chandelier which weighs over six tons, and has a huge stage with room to accommodate up to 450 artists. An ornate building, the style is monumental and considered typically Beaux-Arts, with use of axial symmetry in plan, and its exterior ornamentation.

The Palais is opulently decorated with elaborate multicolored marble friezes, columns, and lavish statuary, many of which portray the deities from Greek mythology. Between the columns of the theatre's front façade, there are bronze busts of many of the great composers, Mozart, Rossini, Daniel Auber, Beethoven, Meyerbeer, Fromental Halévy, Spontini, and Philippe Quinault.

The central roof group, Apollo, Poetry, and Music, was the work of Aimé Millet. The two gilded figural groups Harmony and Poetry were both designed by Charles Gumery, and the two smaller bronze Pegasus figures at either end of the gable are from Eugène-Louis Lequesne. The facade incorporates major multifigure groups sculpted by François Jouffroy (Harmony), Jean-Baptiste Claude Eugène Guillaume (Instrumental Music), Jean-Baptiste Carpeaux (The Dance, criticized for indecency), Jean-Joseph Perraud (Lyrical Drama), and other work by Gumery, Alexandre Falguière and others.

The interior consists of interweaving corridors, stairwells, alcoves and landings allowing the movement of large numbers of people and space for socializing during intermission. Rich with velvet, gold leaf, and cherubim and nymphs, the interior is characteristic of Baroque sumptuousness.

The ceiling area, which surrounds the chandelier, was given a new painting in 1964 by Marc Chagall. This painting proved controversial, with many people feeling Chagall's work clashed with the style of the rest of the theatre. (It was also installed directly onto the old mural, destroying it. The combined weight of both canvases has caused the 19th C. adhesives to fail over time.)

The building become one of the most inspirational architectural prototypes for the next thirty years.

Several buildings in Poland were based on the design of the Palais Garnier, and include the Juliusz Słowacki Theatre in Kraków, built in 1893, and the Warsaw Philharmony edifice in Warsaw, built between 1900 and 1901.

In the Ukraine, the influence of the Palais Garnier can be seen at the The Lviv Theatre of Opera and Ballet in Lviv, built between 1897 and 1900 and also at the Kiev Opera edifice in Kiev, built in 1901.

The Thomas Jefferson Building of the Library of Congress in Washington, D.C. is modeled after Palais Garnier, most notably the facade and Great Hall.Шаблон:Fact

Gabi Bulumac
Probably the most famous Opera house in the world and one of the most impressive landmarks in Paris without any doubt ????????????

Nico Pitney
One of the most beautiful landmarks in Paris. Reserve a spot in one of the guided tours, you will marvel at the architecture.

Carmen Lawrence
This is a fantastically beautiful opera house and I imagine that anything one views here would be great. Great choice of music/dance and Chagall's ceiling is worth visiting in its own right.

Luis Castro
Incredible architecture and scenic views from Paris. You will see lots of married people taking their pictures here. It's just beautiful. The entrance is €6 if you are younger than 25.

Corentin Combalbert
One of my favourite buildings in Paris (before Eiffel Tower !) This palace is so wonderful, I'll advise you to do the escape game inside to discover it.
Load more comments
foursquare.com

The Place de l'Opéra is a square in the 9th arrondissement of Paris,

Café de la Paix is a famous café in the 9th arrondissement of Paris, F

Paris Olympia is a music hall at 28, Blvd. des Capucines, in the 9th

Place Vendôme is a square in the 1st arrondissement of Paris, France,

Columna Vendôme (Français: Colonne Vendôme) is a tourist at 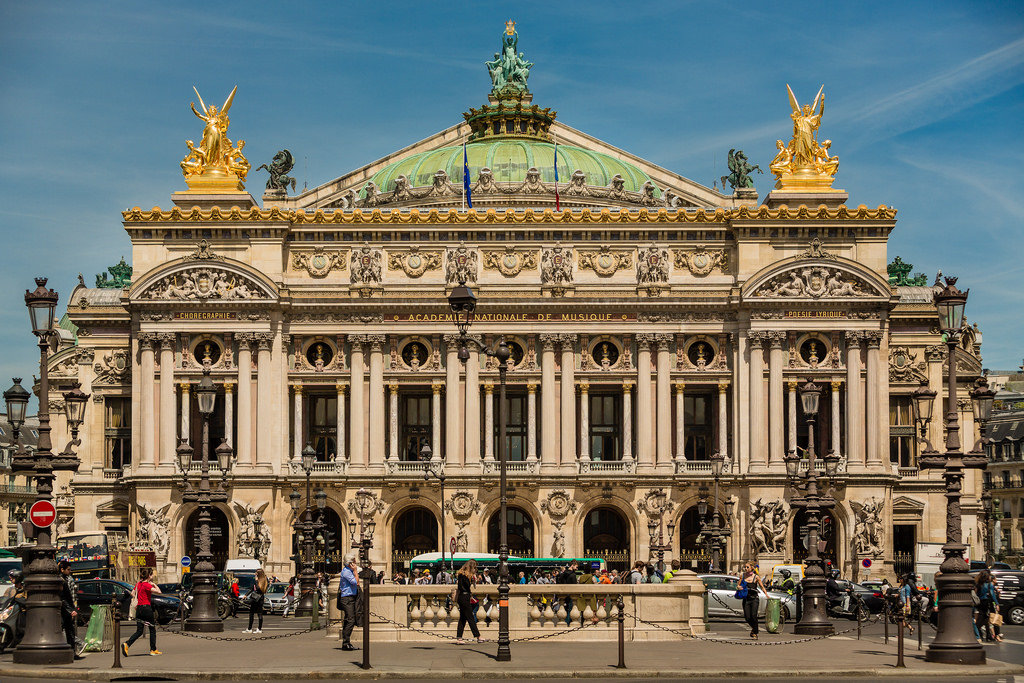