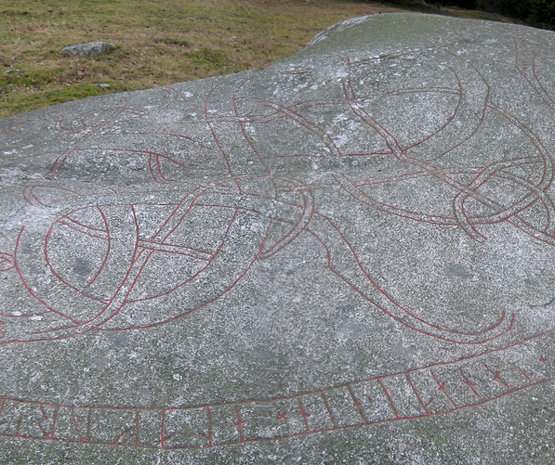 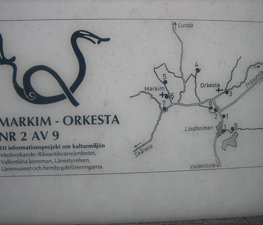 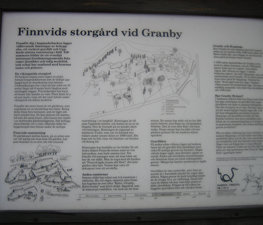 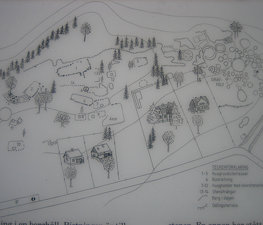 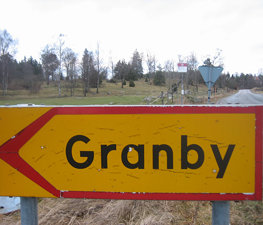 The Orkesta Runestones are 11th century runestones engraved in Old Norse with the younger futhark that are at the church of Orkesta north-east of Stockholm in Sweden.

Several of the stones are raised by, or in memory of, the Swedish Viking Ulf of Borresta who during the eleventh century returned home three times with danegeld. The leaders of the three expeditions were Skagul Toste (Tosti), Thorkell the Tall (Þorketill) and Canute the Great (Knútr). This Ulfr also made the Risbyle Runestones in the same region, and he was mentioned on the lost runestone U 343.

There are two other runestones that mention the danegeld and both of them are found in the vicinity (runestones U 241 and U 194).

This runestone is in runestone style Pr3, which is also known as Urnes style. This runestone style is characterized by slim and stylized animals that are interwoven into tight patterns. The animals heads are typically seen in profile with slender almond-shaped eyes and upwardly curled appendages on the noses and the necks.

This runestone is in runestone style Pr4, which is also known as Urnes style.

... the stone in memory of his father Bjôrn and his mother ... may help the soul ... Ketill carved.

The runestone U 335 was raised to commemorate the building of a new bridge by Holmi. He dedicated the bridge and the runestone to his father Hæra, who was the Housecarl of a lord named Sigrøðr. The reference to bridge-building in the runic text is fairly common in rune stones during this time period. Some are Christian references related to passing the bridge into the afterlife. At this time, the Catholic Church sponsored the building of roads and bridges through the use of indulgences in return for intersession for the soul. There are many examples of these bridge stones dated from the eleventh century, including runic inscriptions Sö 101, U 489, and U 617. Like many other runestones, it was discovered in the walls of a church, where it still remains.

Holmi had this stone raised and this bridge (made) in memory of Hæra, his father, Sigrøðr's housecarl

The runestone U 336 is raised by Ulf of Borresta, in memory of his uncle Ónæmr. Ulf adds that they both lived at Borresta (Old Norse: Báristaðir). The name Ónæmr, which means "slow learner," is also mentioned on two nearby runestones, U 112 and U 328, and so the three runestones are held to refer to the same person. This inscription is classified as being carved in runestone style RAK.

Ulfr had this stone raised in memory of Ónæmr, his father's brother. They both lived in Báristaðir.

This runestone was possibly in style Pr3. It formed a monument together with U 344, below, in Yttergärde. Although it has disappeared, it is included here because its makers intended it to accompany U 344. This runestone is attributed to the runemaster Åsmund, as is U 344. For the word moðiR, "mother," Åsmund left off the final R rune. He also left off this final R rune for the same word on U 241, on the word for "rune" on U 884, and possibly on the name Guðælfr on the now-lost U 1003.

Karsi and ... they had this stone raised in memory of Ulfr, their father. May God help his ... and God's mother.

The runestone U 344, in the style Pr3, was found in 1868, at Yttergärde, by Richard Dybeck, but it is today raised at the church of Orkesta. The runes are written from right to left with the orientation of the runes going in the same direction, but the last words outside the runic band have the usual left-right orientation. It can be dated to the first half of the 11th century because of it still uses the ansuz rune for the a and æ phomenes, and because of its lack of dotted runes.

This stone is notable because it commemorates that the Viking Ulf of Borresta had taken three danegelds in England. The first one was with Skagul Toste, the second one with Thorkel the High and the last one with Canute the Great. Since there were many years between the danegelds, it is likely that Ulfr returned to Sweden after each danegeld to live as a wealthy magnate. It is a remarkable feat in itself to summarize his adventurous life in so few unsentimental words.

And Ulfr has taken three payments in England. That was the first that Tosti paid. Then Þorketill paid. Then Knútr paid.

Tips & Hints
Arrange By:
Popular first New first
There are no tips nor hints for Orkesta Runestones yet. Maybe be you will be the first one to post useful information for fellow travellers? :)
2.3/10
3 people have been here
I've been here
Add to wishlist

Rosersberg Palace (Swedish: Rosersbergs slott) is one of the Royal 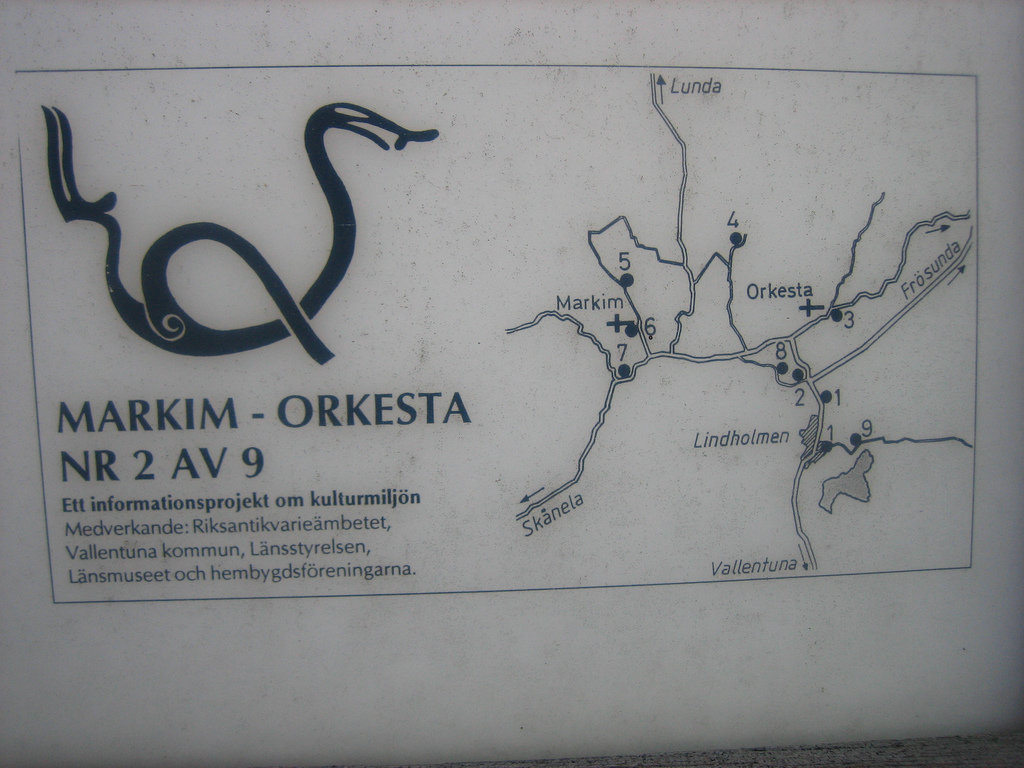 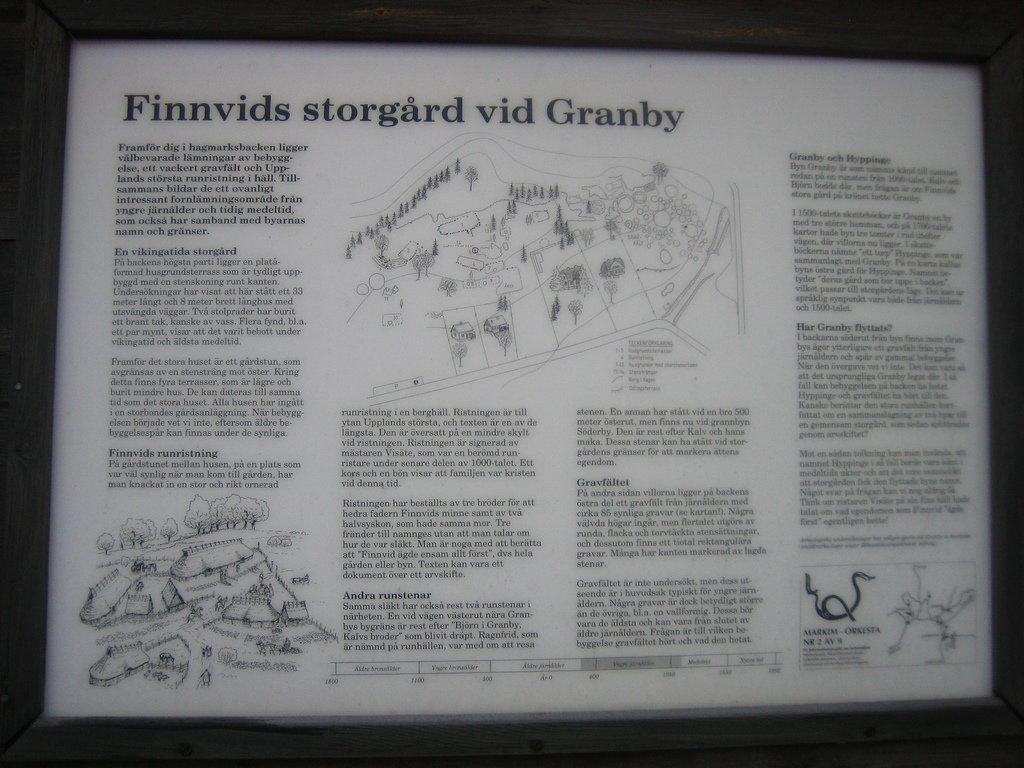 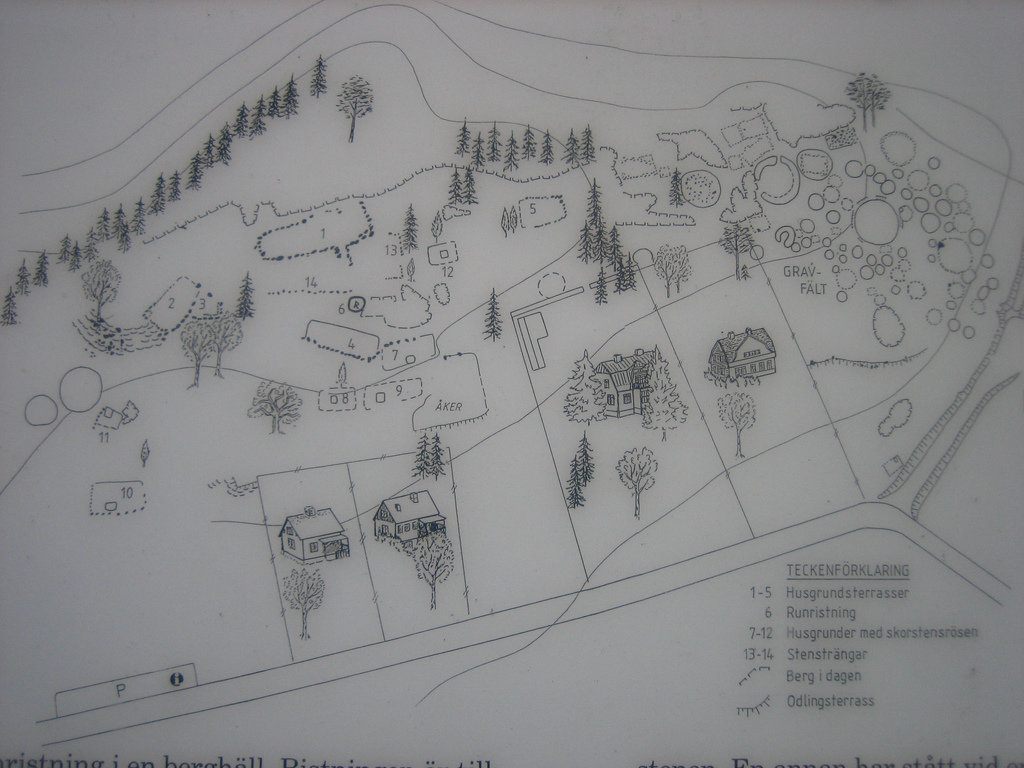 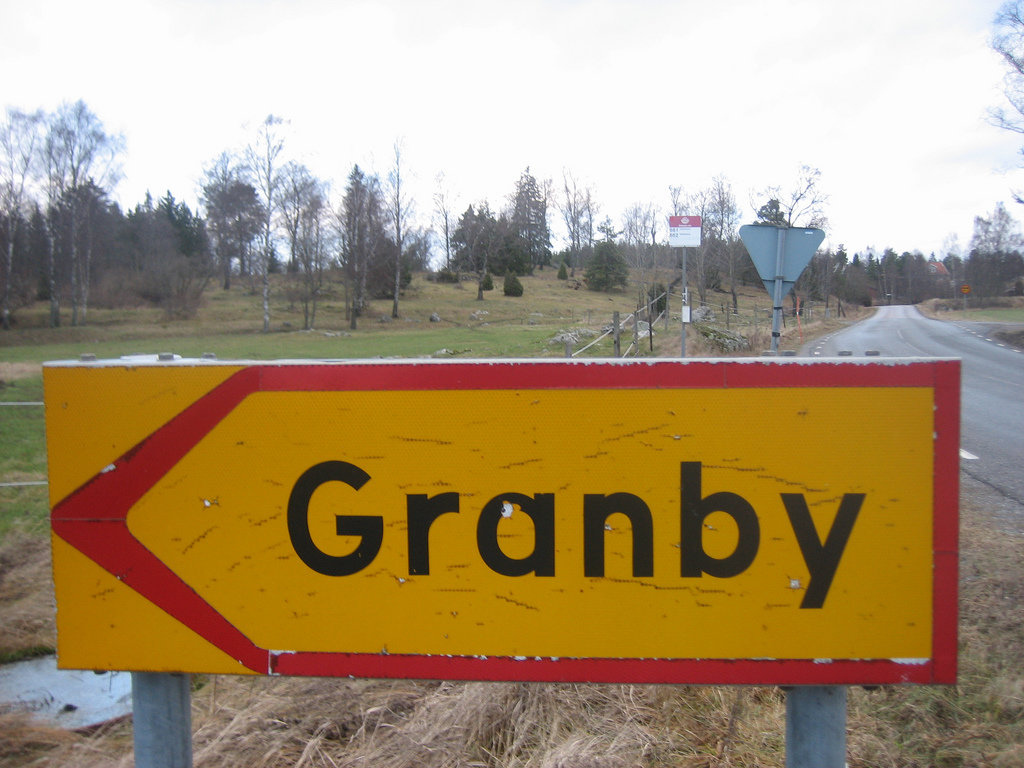 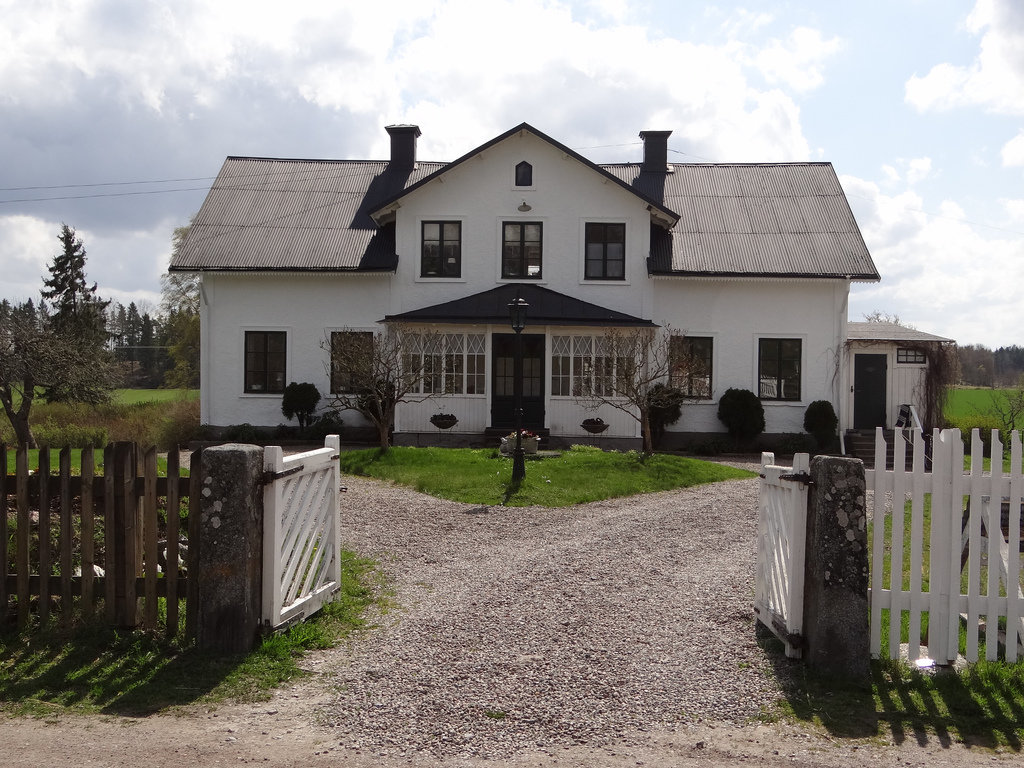 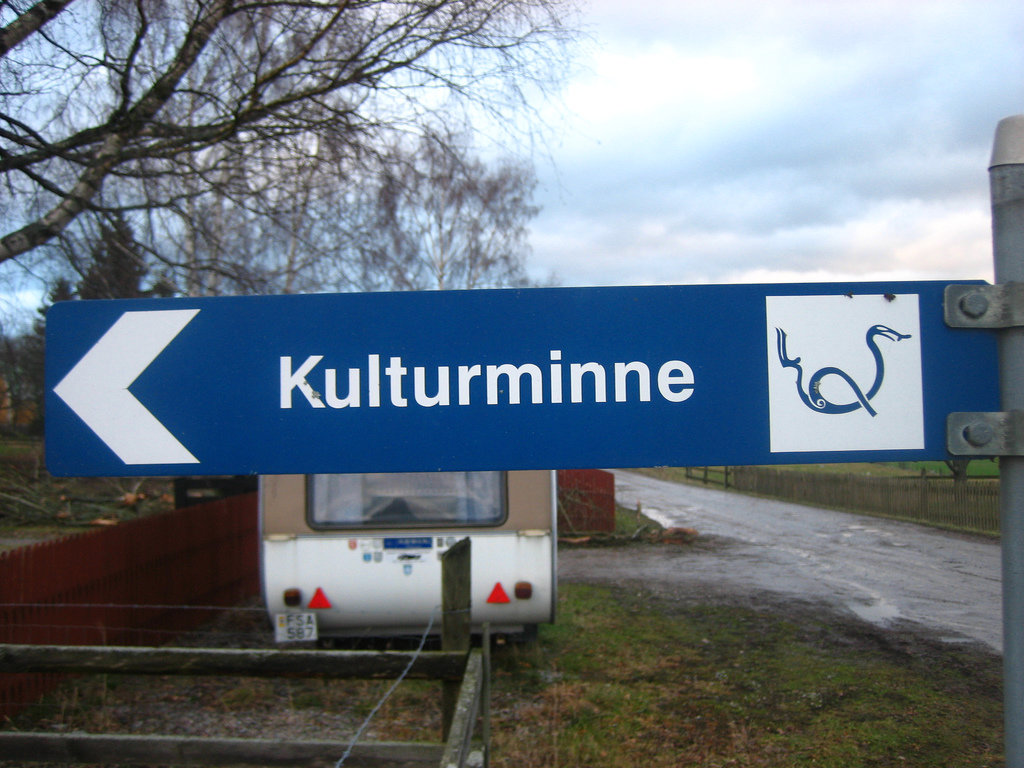