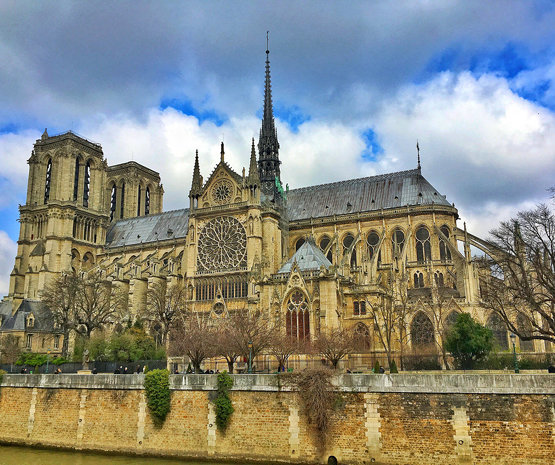 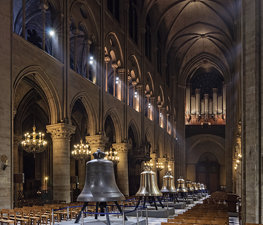 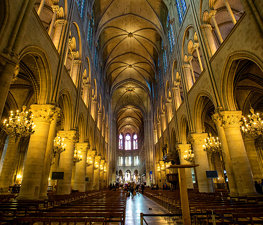 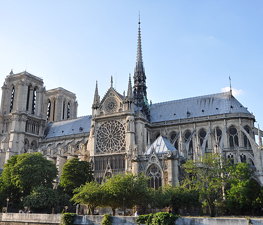 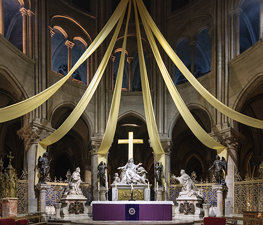 Notre Dame de Paris ('Our Lady of Paris' in French) is a Gothic cathedral on the eastern half of the Île de la Cité in the fourth arrondissement of Paris, France, with its main entrance to the west. It is the main Catholic cathedral of the archdiocese of Paris and the seat of the Archbishop of Paris. Notre Dame de Paris is widely considered one of the finest examples of French Gothic architecture in the world. It was restored and saved from destruction by Viollet-le-Duc, one of France's most famous architects. The name Notre Dame means "Our Lady" in French.

Notre Dame de Paris was one of the first Gothic cathedrals, and its construction spanned the Gothic period. Its sculptures and stained glass show the heavy influence of naturalism, unlike that of earlier Romanesque architecture.

Notre Dame de Paris was among the first buildings in the world to use the flying buttress [arched exterior supports]. The building was not originally designed to include the flying buttresses around the choir and nave. After the construction began and the thinner walls (popularized in the Gothic style) grew ever higher, stress fractures began to occur as the walls pushed outward. In response, the cathedral's architects built supports around the outside walls, and later additions continued as such.

The cathedral suffered desecration during the radical phase of the French Revolution in the 1790s, when much of its religious imagery was damaged or destroyed. During the 19th century, an extensive restoration project was completed, returning the cathedral to its previous state.

In 1160, because the church in Paris had become the "parish church of the kings of Europe", Bishop Maurice de Sully deemed the previous Parisian cathedral, St Stephen's (which had been built in the 4th century) unworthy of its lofty role, and had it demolished shortly after he assumed the title of Bishop of Paris. According to legend, de Sully had a vision of a glorious new cathedral for Paris, and sketched it in the dirt outside of the original church. To begin the construction, the bishop had several houses demolished and had a new road built in order to transport materials for the rest of the cathedral. , Portal of the Last Judgment and Portal of St-Anne]] Construction began in 1163, during the reign of Louis VII, and opinion differs as to whether Maurice de Sully or Pope Alexander III laid the foundation stone of the cathedral. However, both were at the ceremony in question. Bishop de Sully went on to devote most of his life and wealth to the cathedral's construction.

Construction of the west front, with its distinctive two towers, began about the year 1200, before the nave had been completed, contrary to normal construction practice. Over the construction period, numerous architects worked on the site, as is evidenced by the differing styles at different heights of the west front and towers. Between 1210 and 1220, the fourth architect oversaw the construction of the level with the rose window and the great halls beneath the towers. The towers were completed around 1245, and the cathedral was completed around 1345.

Though several organs were installed in the cathedral over time, the earliest ones were inadequate for the building. The first noteworthy organ was finished in the 1700s by the noted builder François-Henri Clicquot. Some of Clicquot's original pipework in the pedal division continues to sound from the organ today. The organ was almost completely rebuilt and expanded in the 19th century by Aristide Cavaillé-Coll.

The position of titular organist at Notre-Dame is considered as one of the most prestigious organist posts in France, along with the post of Saint Sulpice in Paris, Cavaillé-Coll's largest instrument.

The organ has 7,800 pipes, with 900 classified as historical. The organ has 109 stops, five 56-key manuals and a 32-key pedalboard. In December 1992, work was completed on the organ that fully computerized the organ under 3 LANs (Local Area Networks).

Among the best-known organists at Notre Dame was Louis Vierne, who held this position from 1900 to 1937. Under his tenure, the Cavaillé-Coll organ was modified in its tonal character, notably in 1902 and 1932. Pierre Cochereau initiated further alterations (many of which were already planned by Louis Vierne), including the electrification of the action between 1959 and 1963 (the original Cavaillé-Coll console, which is now located in the south tower entrance to the tribune), was replaced by a new console in Anglo-American style) and the addition of further stops between 1965 and 1972, notably in the pedal division, the recomposition of the mixture stops, and finally the adding of three horizontal reed stops "en chamade".

After Cochereau's sudden death in 1984, four new titular organists were appointed at Notre Dame in 1985: Jean-Pierre Leguay, Olivier Latry, Yves Devernay (who died in 1990), and Philippe Lefebvre. This was reminiscent of the 18th-century practice of the cathedral having four titular organists, each one playing for three months of the year. Beginning in 1989, another restoration to the instrument was undertaken, which was completed in 1992.

In 1548, rioting Huguenots damaged features of the cathedral, considering them idolatrous. During the reigns of Louis XIV and Louis XV, the cathedral underwent major alterations as part of an ongoing attempt to modernize cathedrals throughout Europe. Tombs and stained glass windows were destroyed. The north and south rose windows were spared this fate, however.

In 1793, during the French Revolution, the cathedral was rededicated to the Cult of Reason, and then to the Cult of the Supreme Being. During this time, many of the treasures of the cathedral were either destroyed or plundered. The statues of biblical kings of Judah (erroneously thought to be kings of France) were beheaded. Many of the heads were found during a 1977 excavation nearby and are on display at the Musée de Cluny. For a time, Lady Liberty replaced the Virgin Mary on several altars. The cathedral's great bells managed to avoid being melted down. The cathedral also came to be used as a warehouse for the storage of food.

A restoration program was initiated in 1845, overseen by architects Jean-Baptiste-Antoine Lassus and Eugène Viollet-le-Duc. The restoration lasted 25 years and included the construction of a flèche (a type of spire) as well as the addition of the chimeras on the Galerie des Chimères. Viollet le Duc always signed his work with a bat, the wing structure of which most resembles the Gothic vault (see Roquetaillade castle).

In 1871, during the period of the Paris Commune, the cathedral was nearly set alight: some records suggest that the rebels even went so far as to set fire to a mound of chairs within the building. Whether that was so or not, the cathedral survived the Commune period essentially unscathed.

In 1939, during World War II, it was feared that German bombers could destroy the windows; as a result, on September 11 1939, they were removed. They were restored at the end of the war.

In 1991, a major program of maintenance and restoration was initiated, which was intended to last 10 years but is still in progress as of 2009, the cleaning and restoration of old sculptures being an exceedingly delicate matter.

There are five bells at Notre Dame. The great bourdon bell, Emmanuel, is located in the South Tower, weighs just over 13 tons, and is tolled to mark the hours of the day and for various occasions and services. There are four additional bells on wheels in the North Tower, which are swing chimed. These bells are rung for various services and festivals. The bells were once rung manually, but are currently rung by electric motors. The bells also have external hammers for tune playing from a small clavier.

The cathedral is renowned for its Lent sermons founded by the famous Dominican Jean-Baptiste Henri Lacordaire in the 1840s. In recent years, however, an increasing number have been given by leading public figures and state-employed academics. Many of their audience, however, are foreigners, and as such obliged to a devoir de réserve.

Lufthansa
Of all famous Parisian landmarks, the Notre Dame Cathedral is the oldest. After a long construction period, this Gothic masterpiece was completed in 1345. But it is still as popular as ever!

All-Paris-Apartments.com
The view from the top of Notre Dame is breathtaking, and definitely worth the 402 steps it takes to get there (no elevators)! Make sure to check out the gargoyles and make the most of the free entry!

Artyom Fedosov
Long long queues, but worth waiting. Free entrance, both exterior and interior are superb. Must see in Paris.

shabnam sina
such a nice view to river and has a great classic architecture , when you walk into the church you can feel another sence of being in space .

Carlos Rangel
One of the most magnificent and beautiful cathedrals of the modern era, do not forget to visit it’s interiors and climb the narrow staircase to the bell tower and admire Paris along with the gargoyles

Barb K
a different visit to the “cloches” “bells of Notre Dame. you have to climb around 300 stairs to reach them. it really worth it!! the view is unique
Load more comments
foursquare.com
9.0/10
Pascal, Vladimir Vulic and 3,194,463 more people have been here
I've been here
Add to wishlist

Pont de lArchevêché is a tourist attraction, one of the Bridges in P

The Mémorial de la Déportation is a memorial to the 200,000 people d

The Pont Notre-Dame is a bridge that crosses the Seine in Paris,

The Hôtel de Ville (Шаблон:IPA-fr, City Hall) in Paris, France, is the 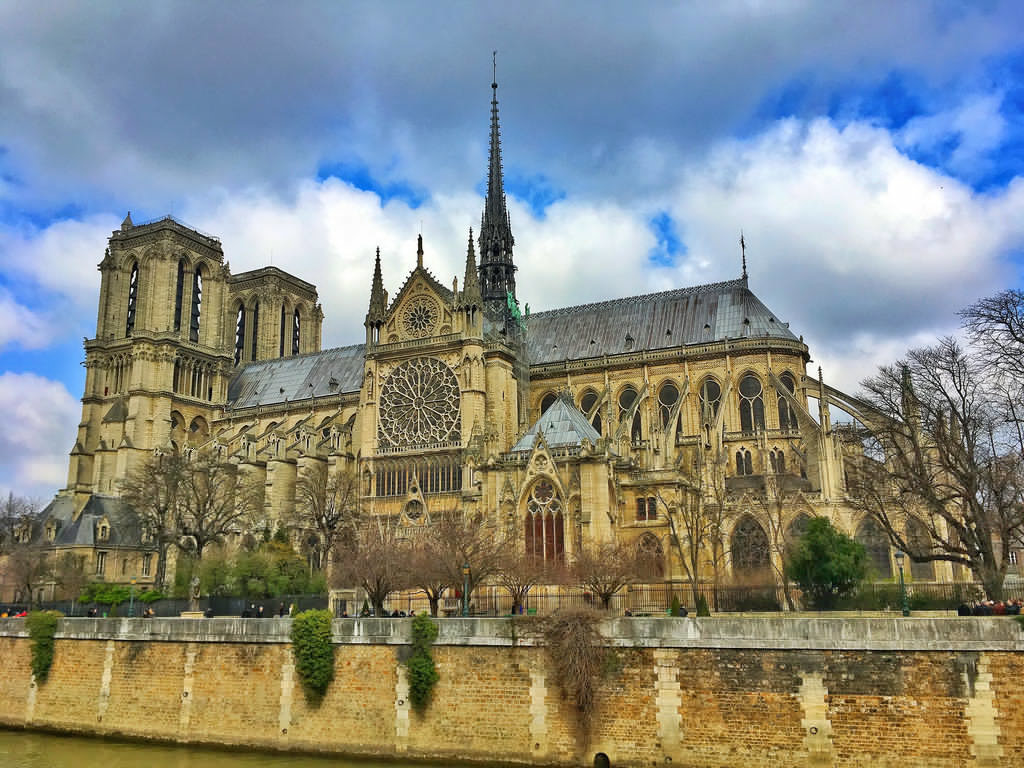 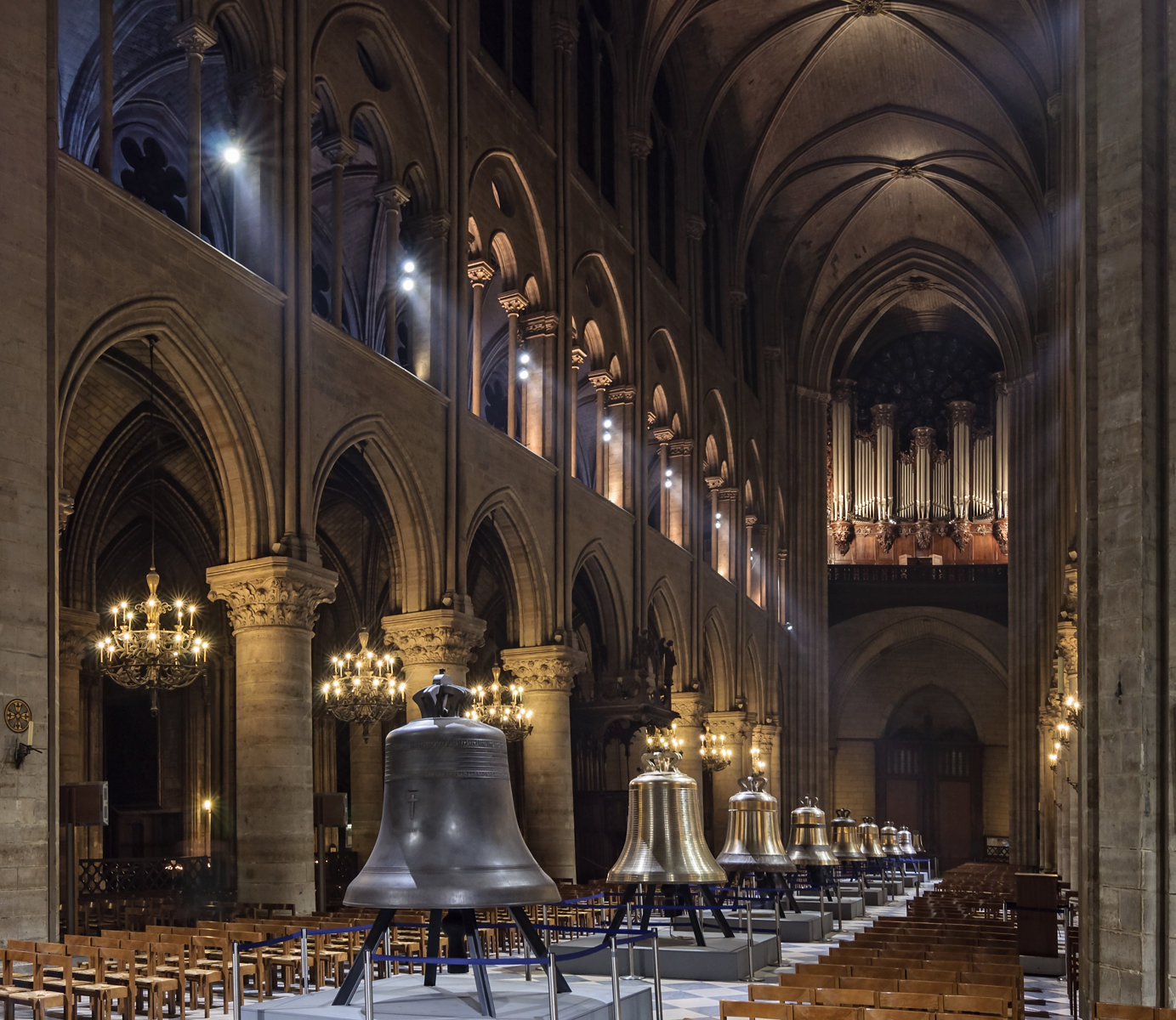 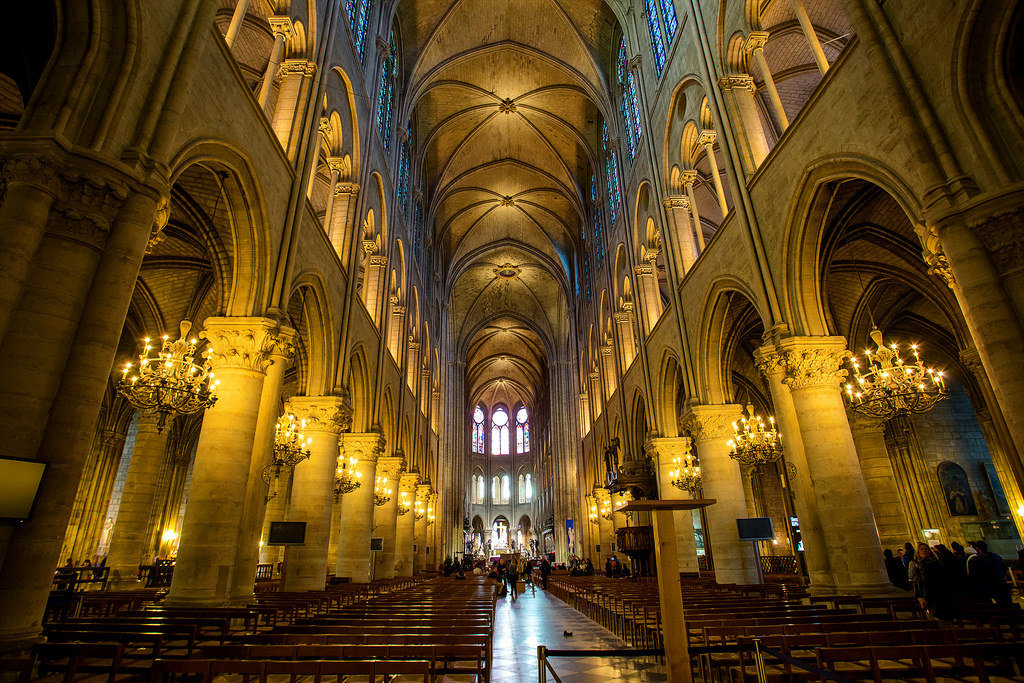 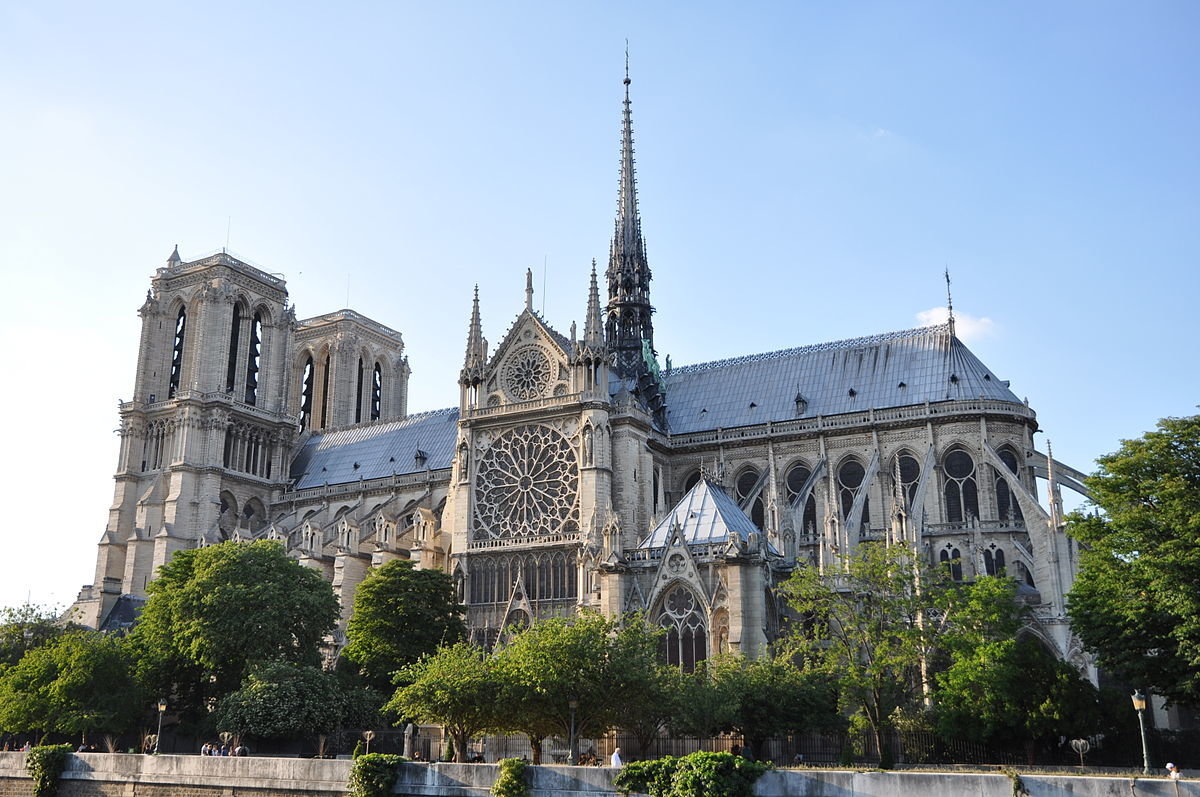 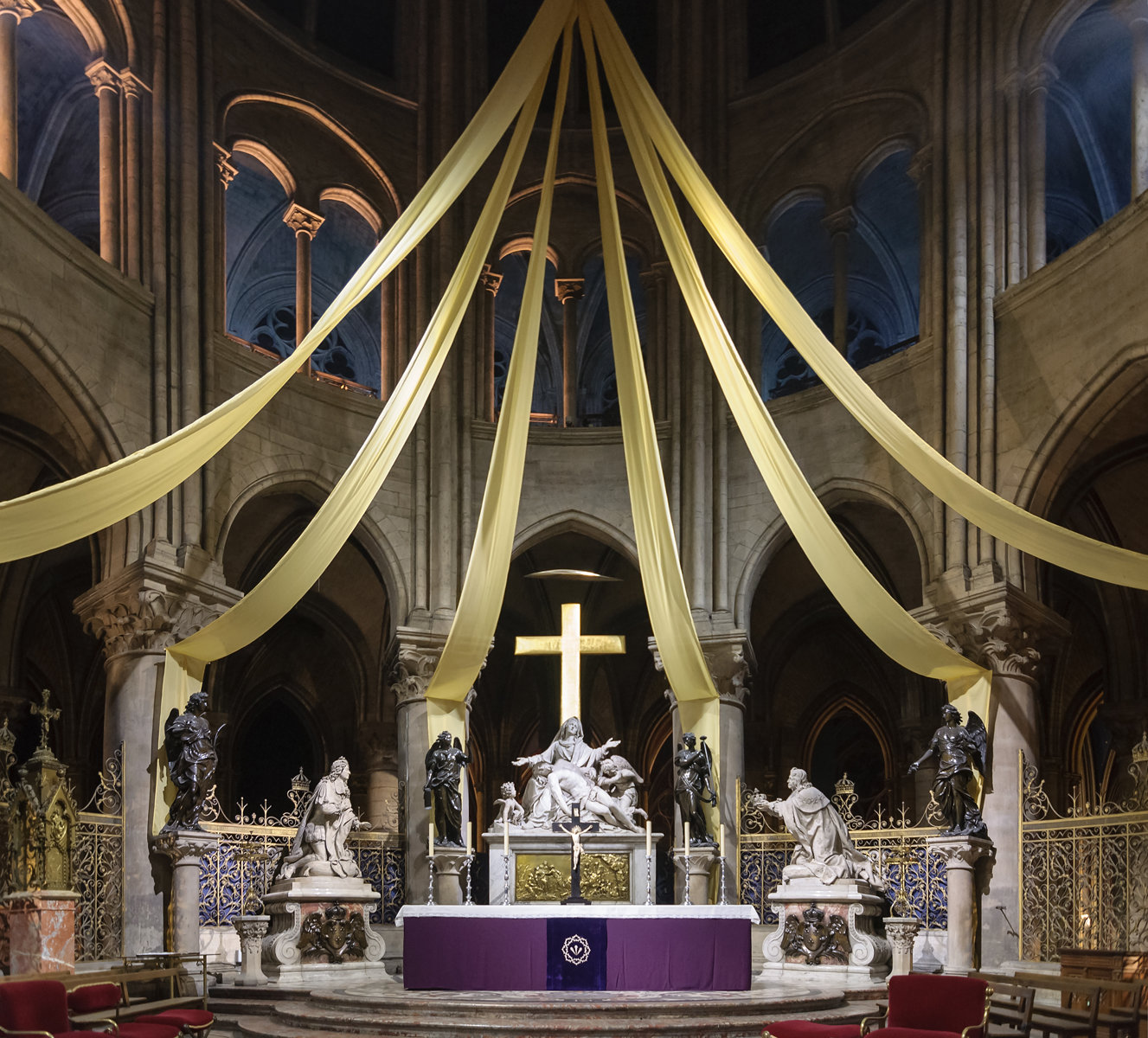 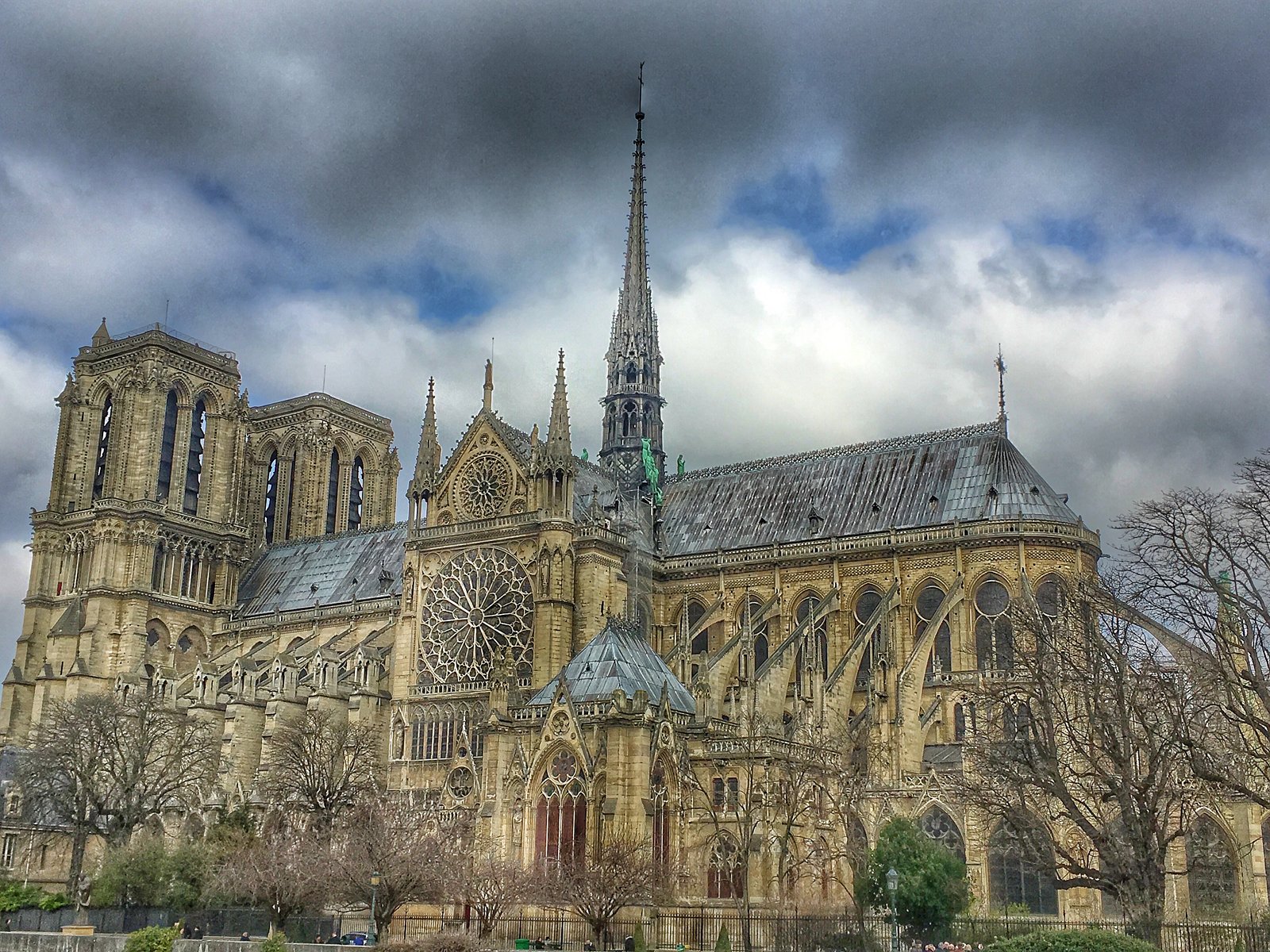 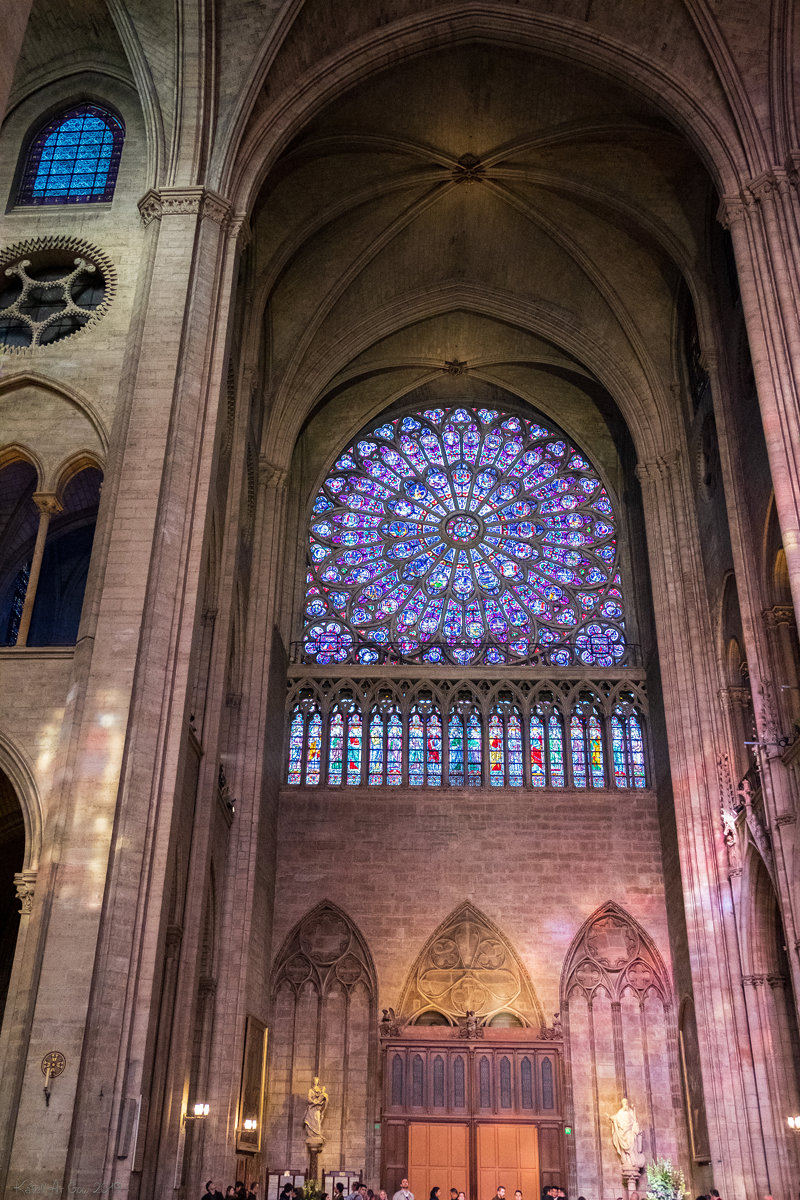 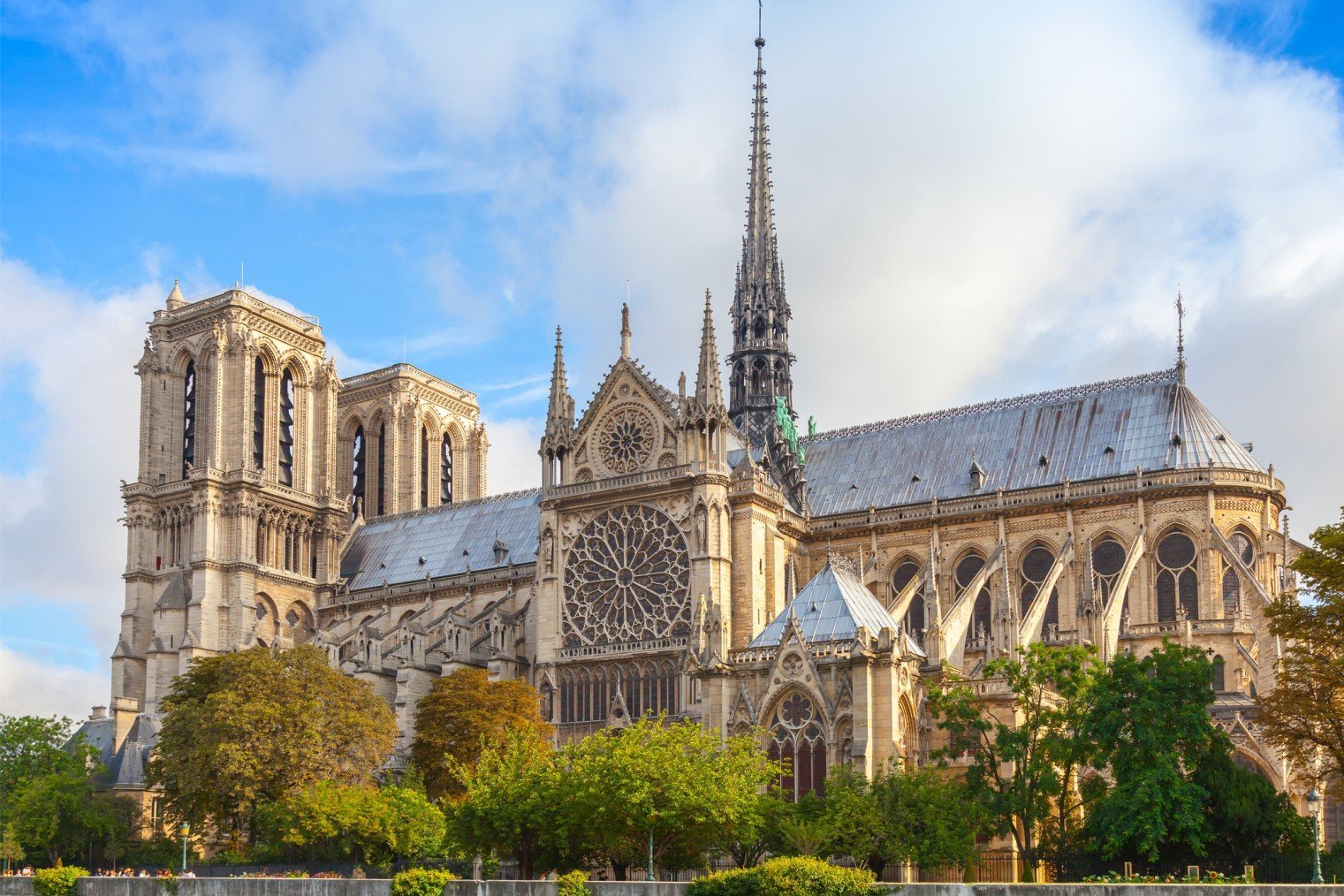 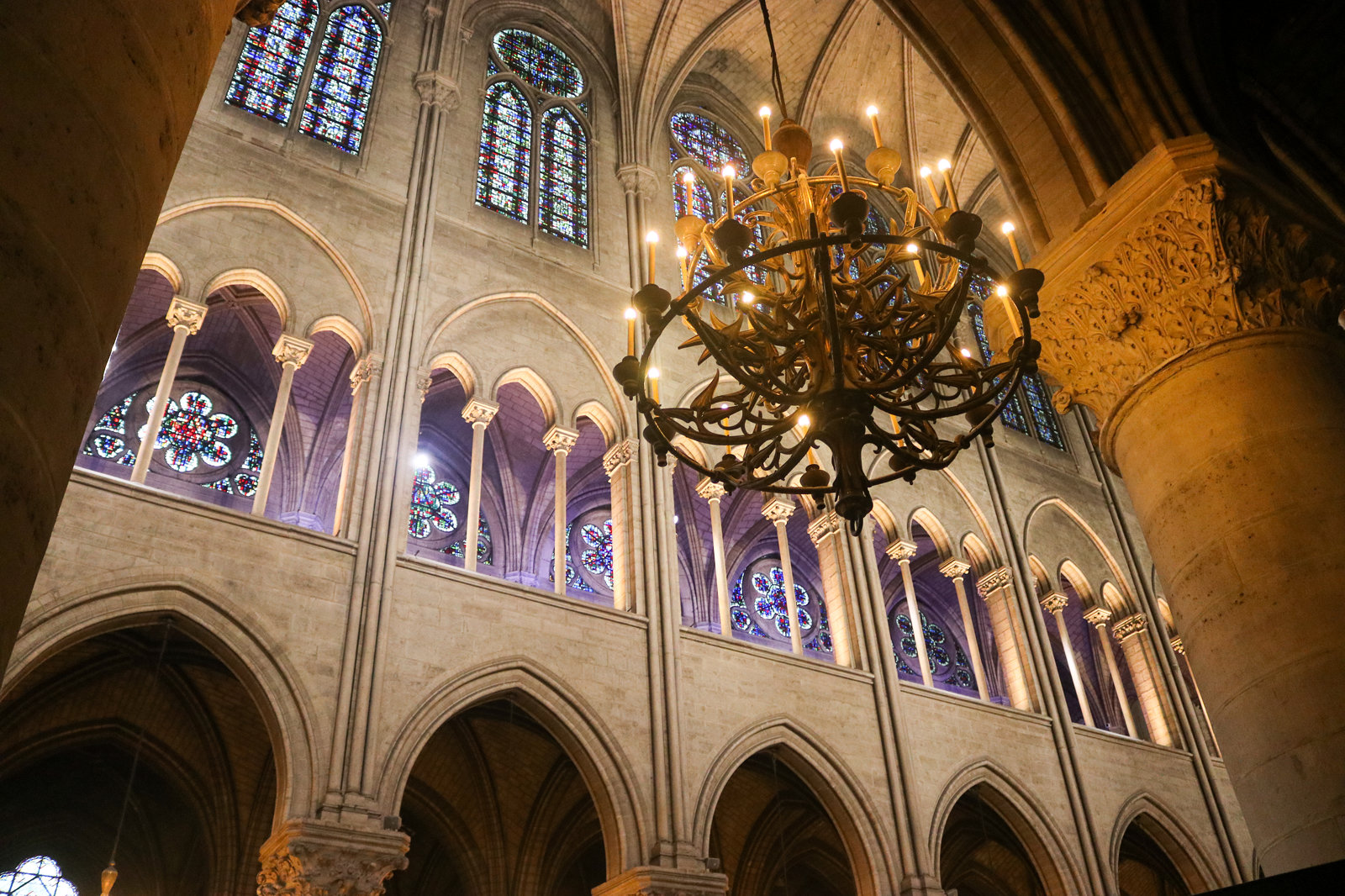 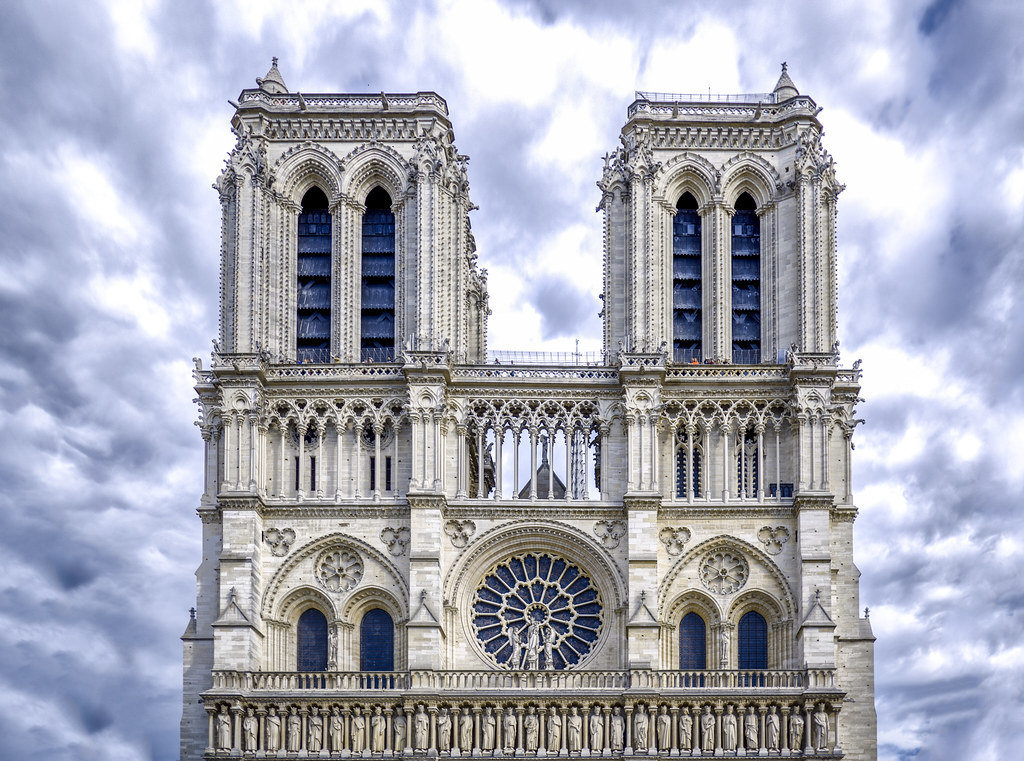 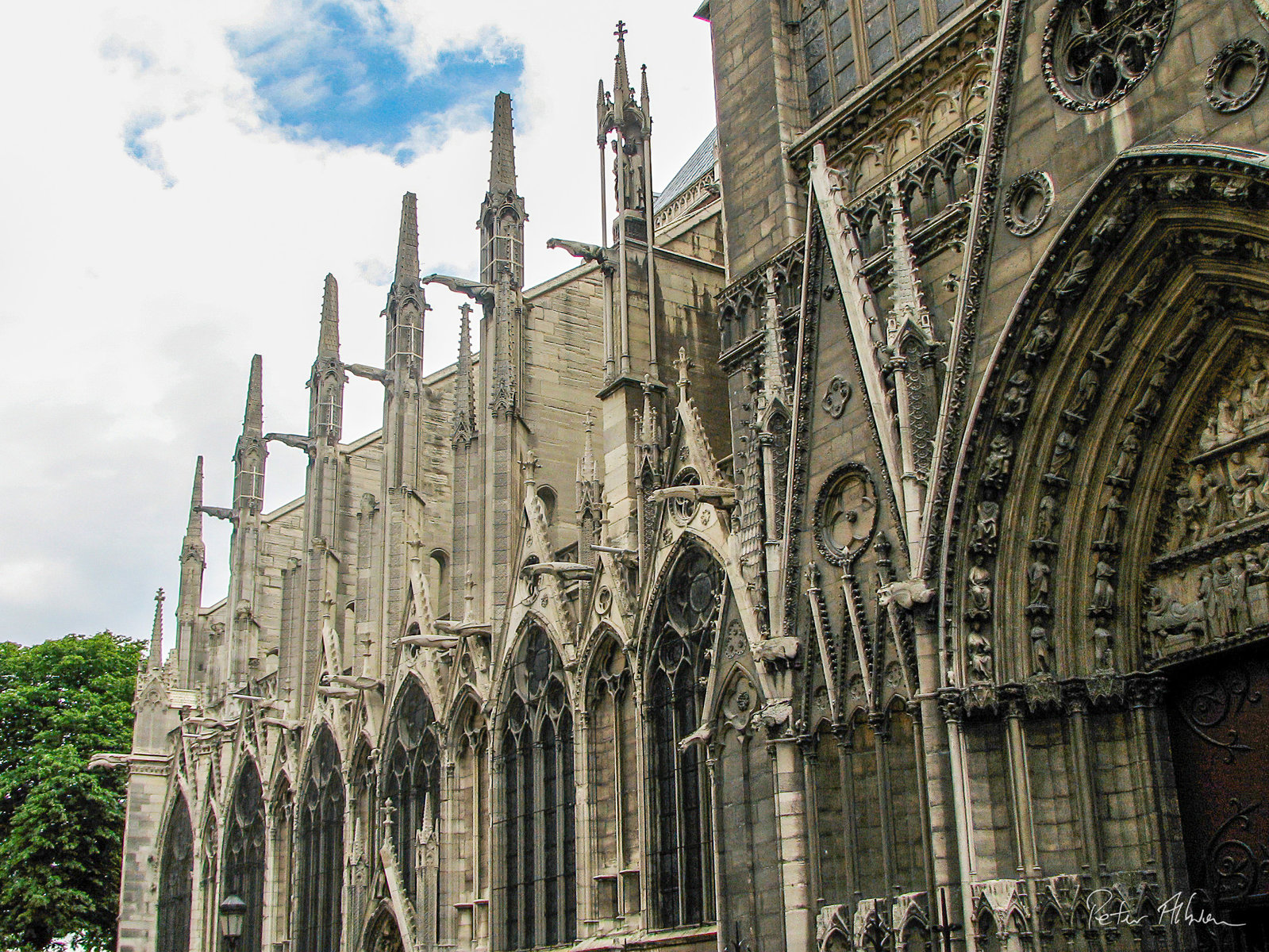 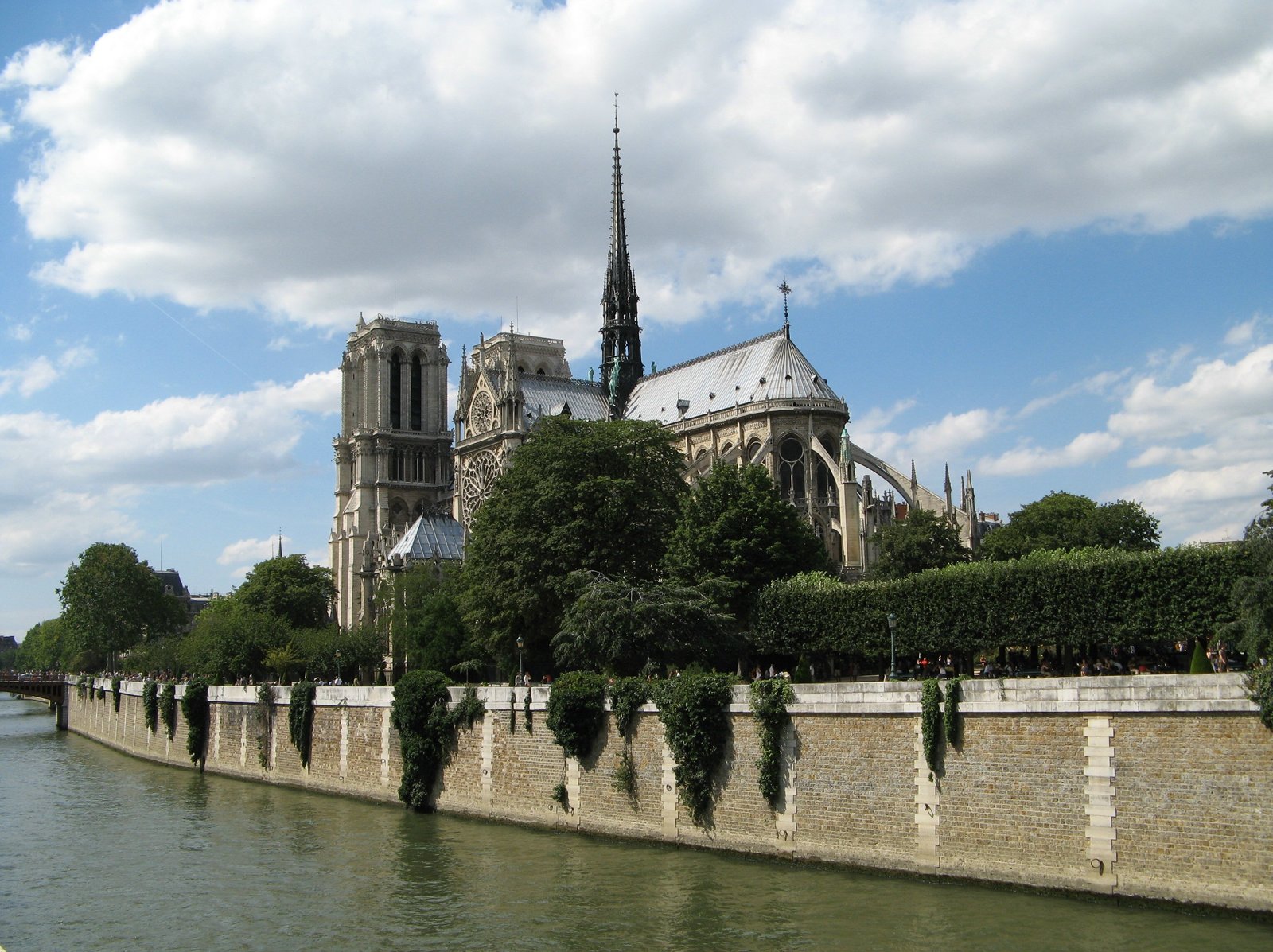 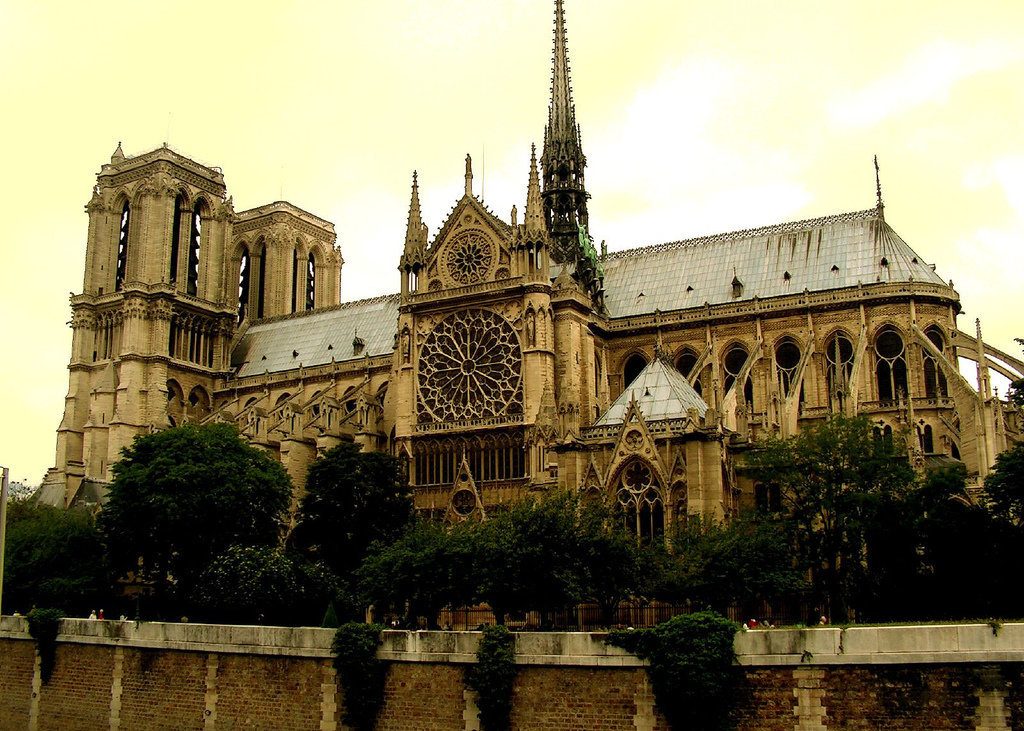 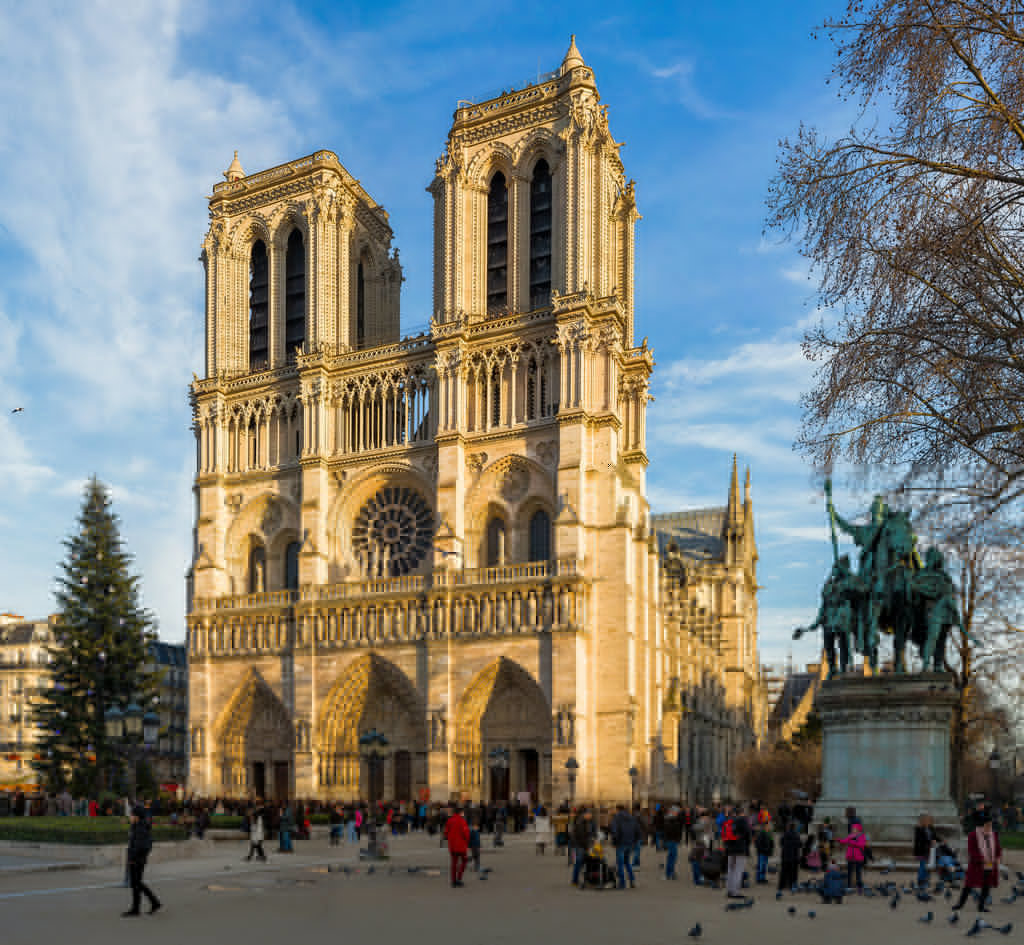 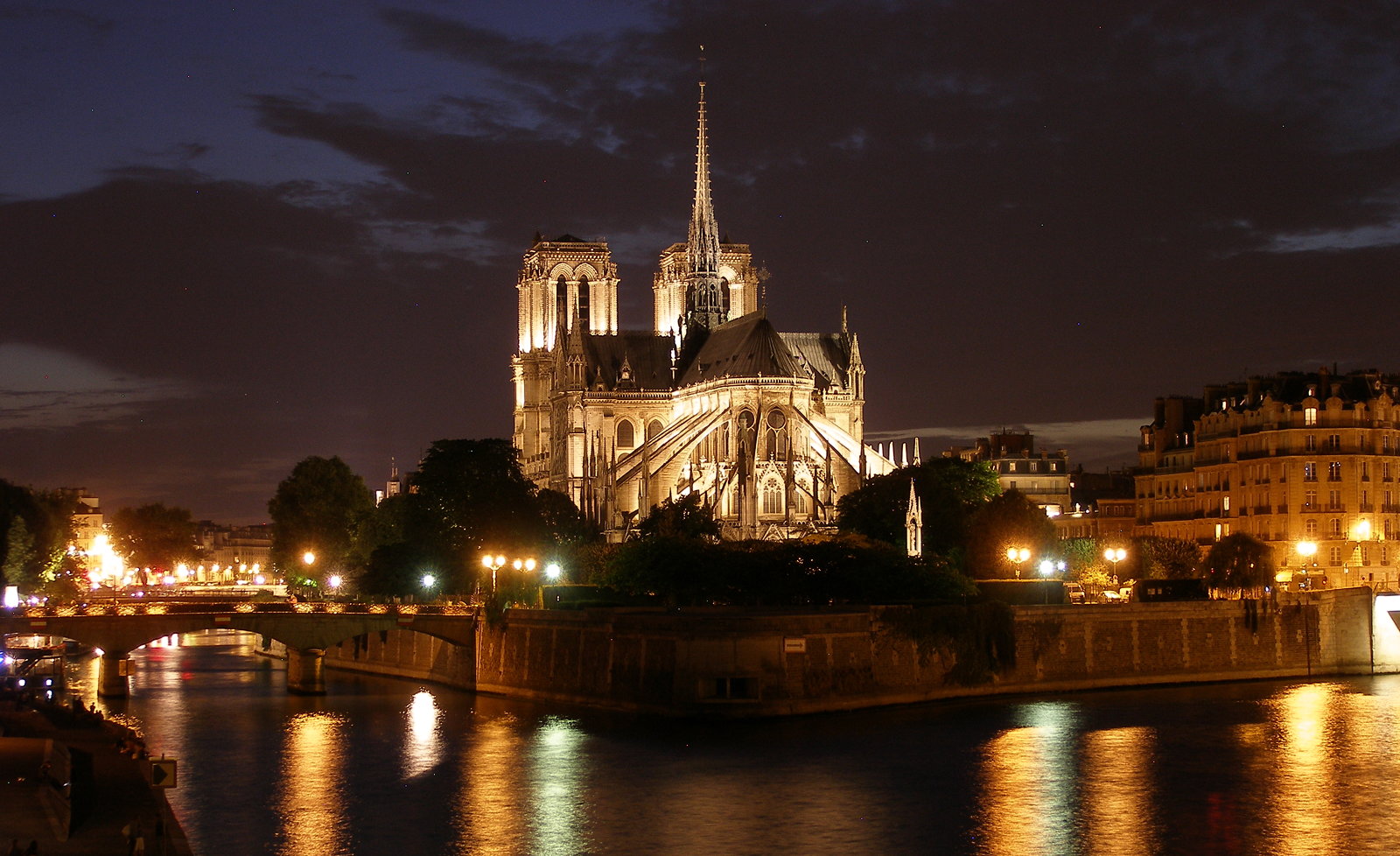 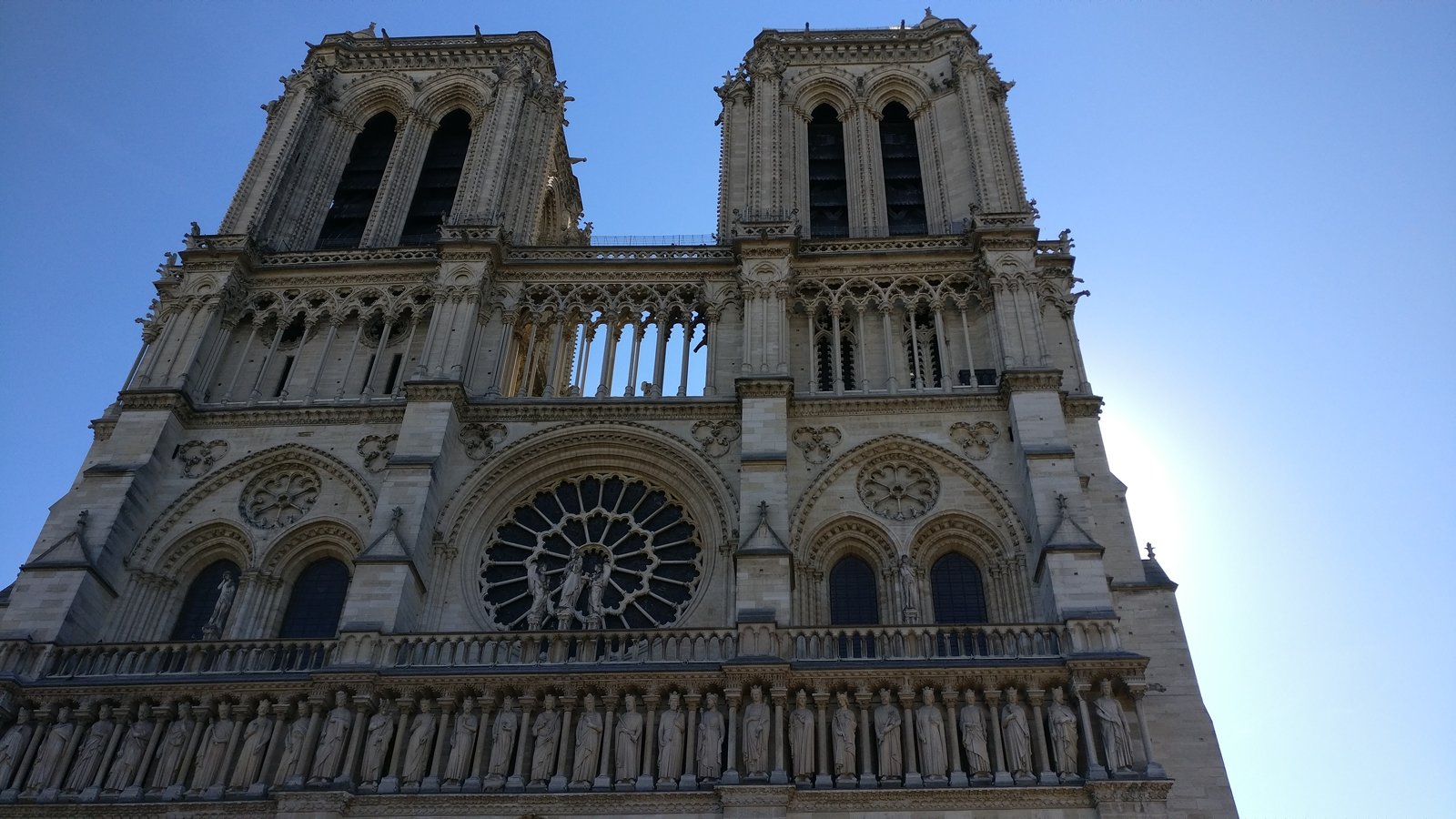 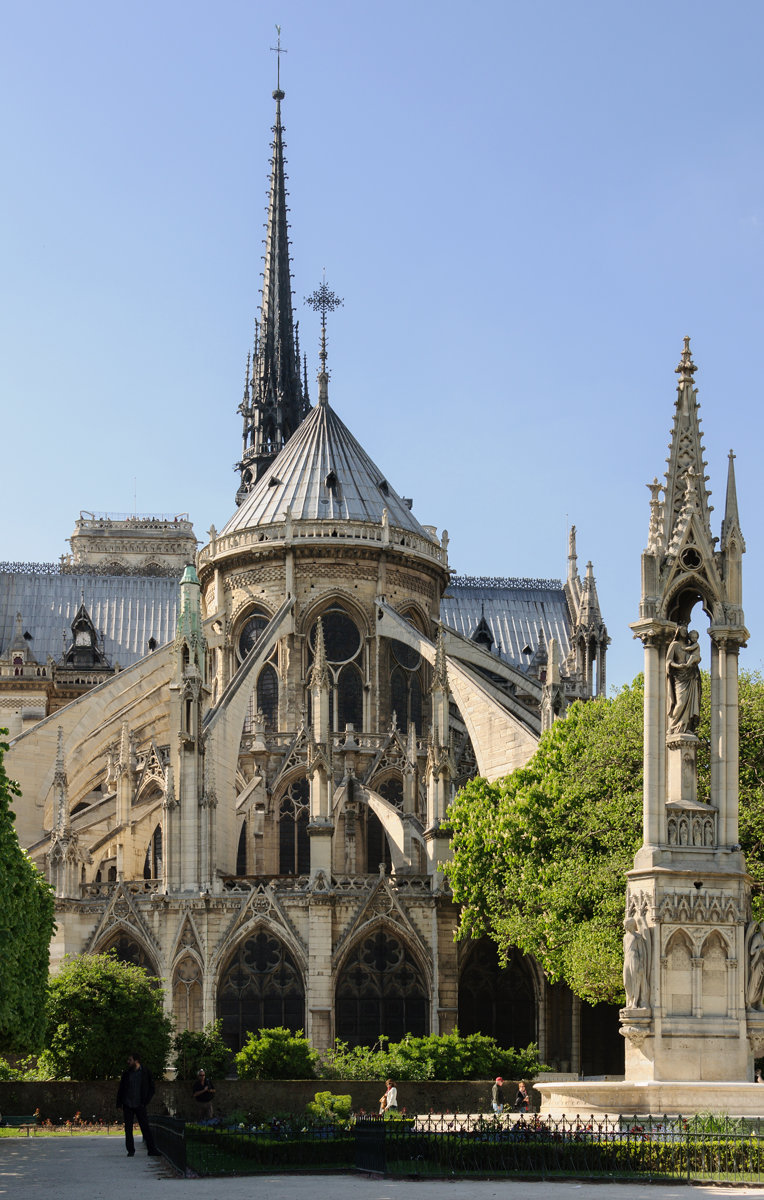 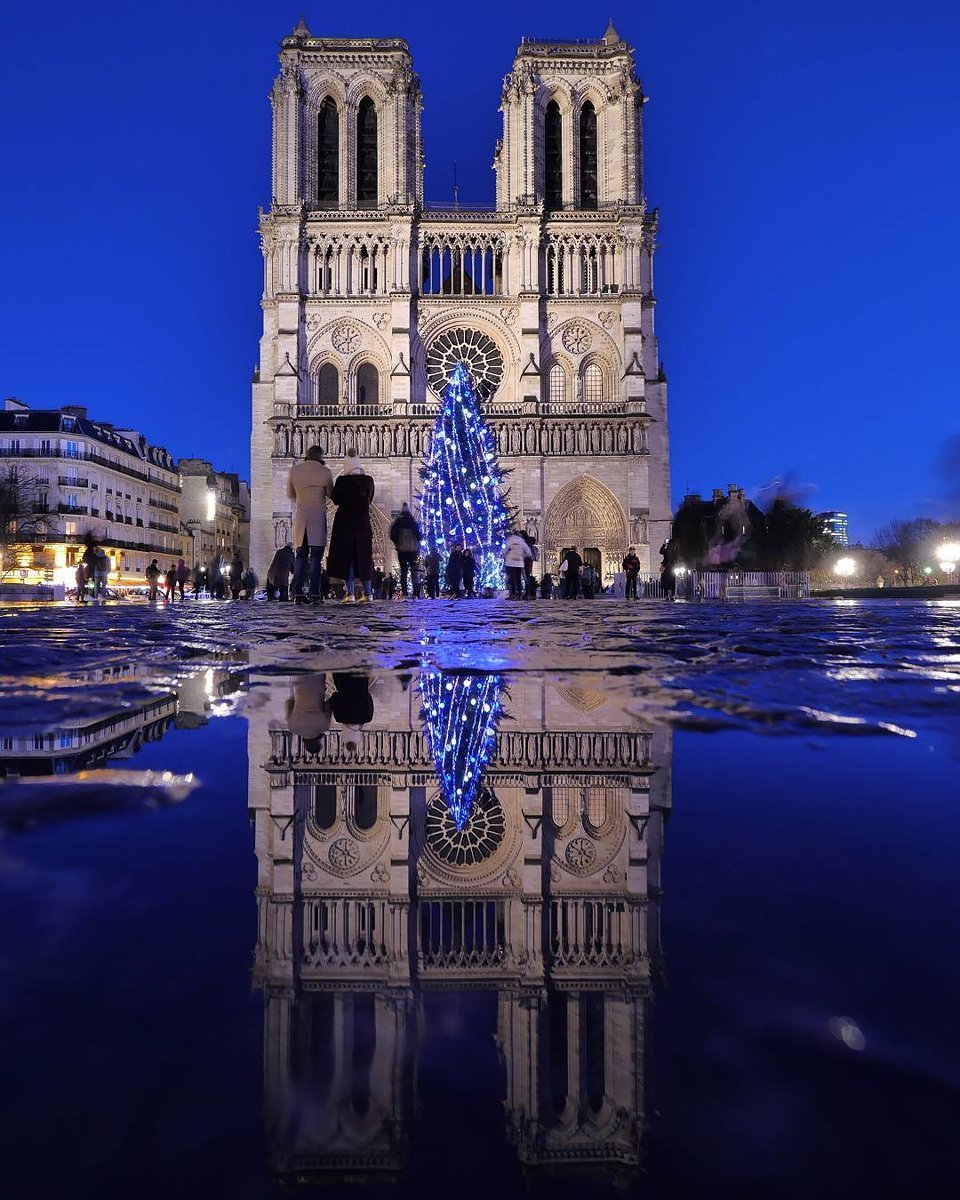 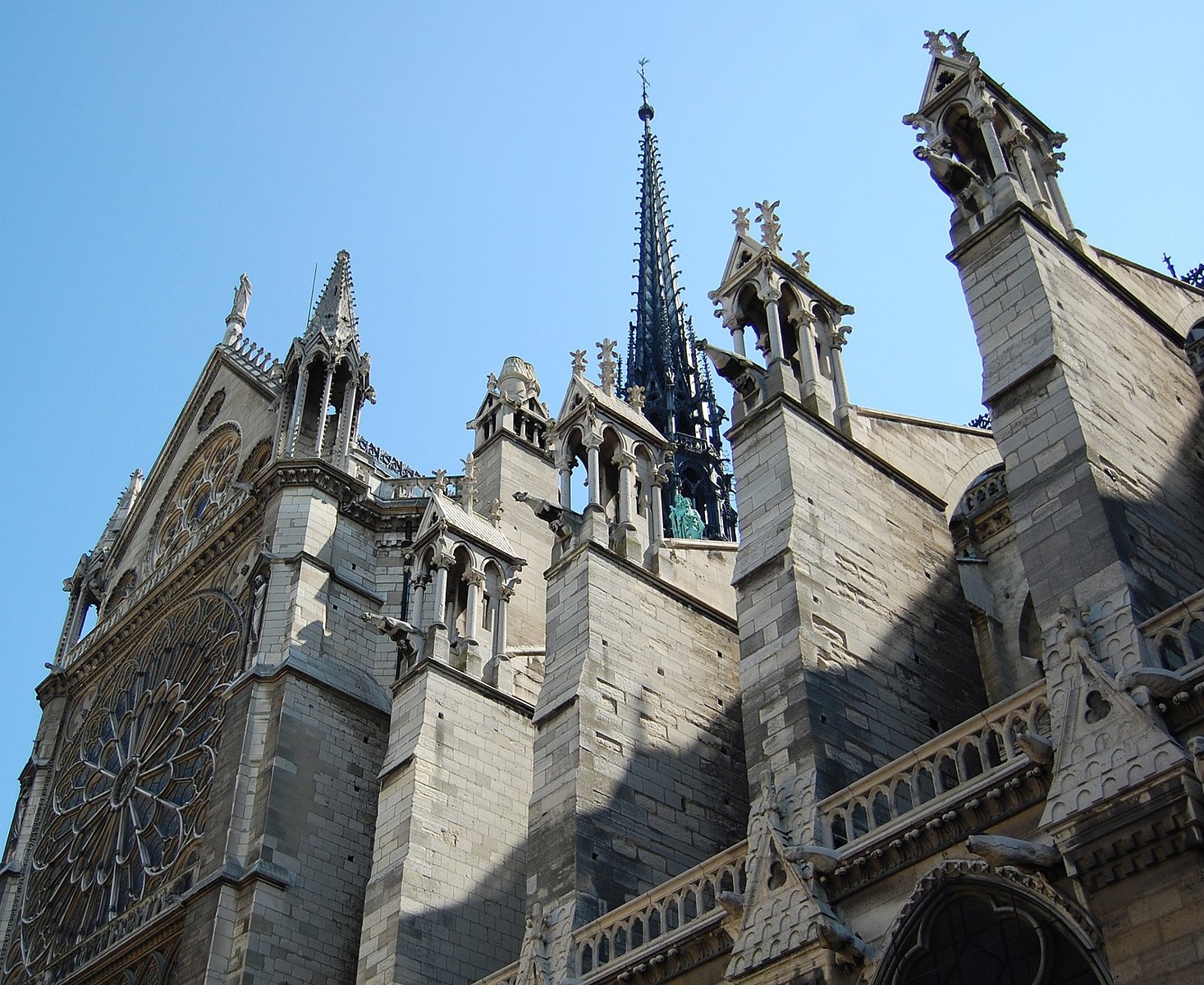 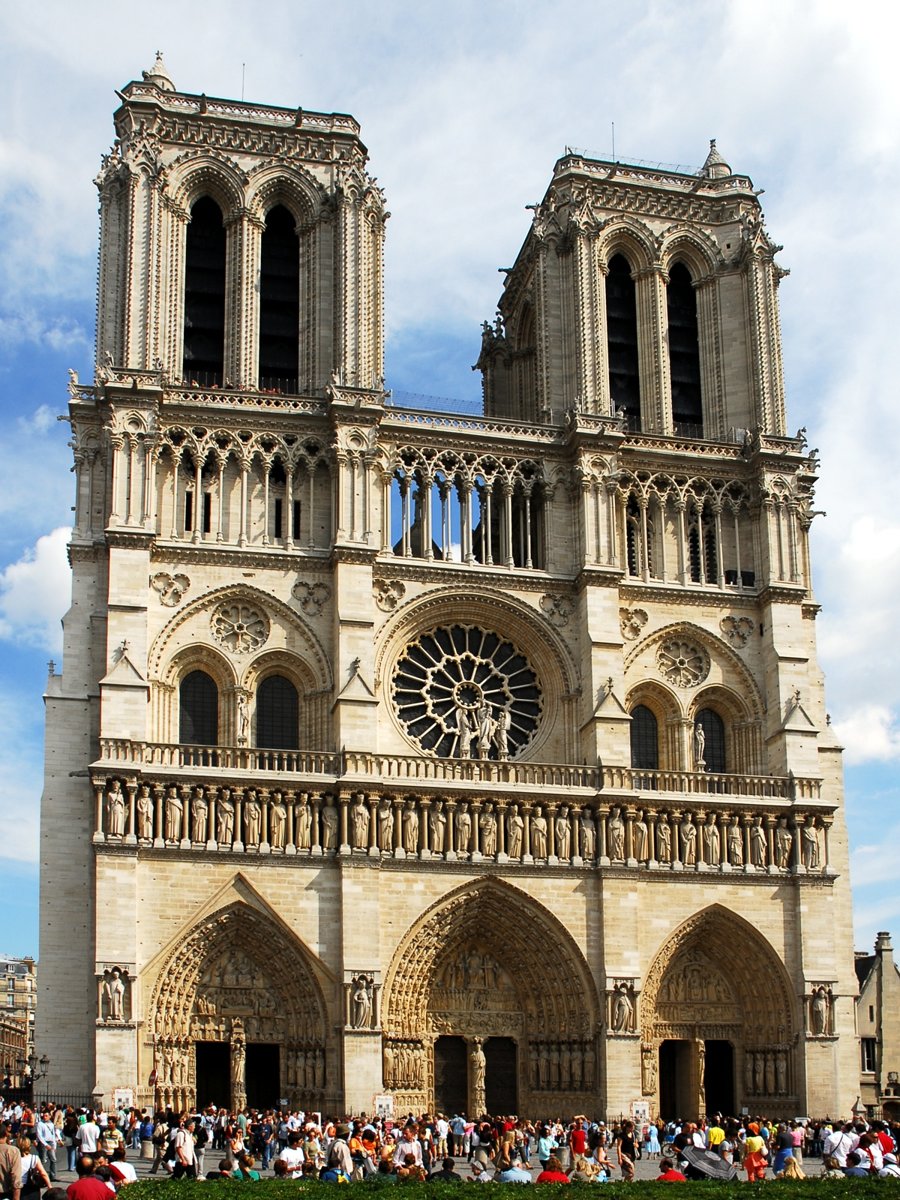 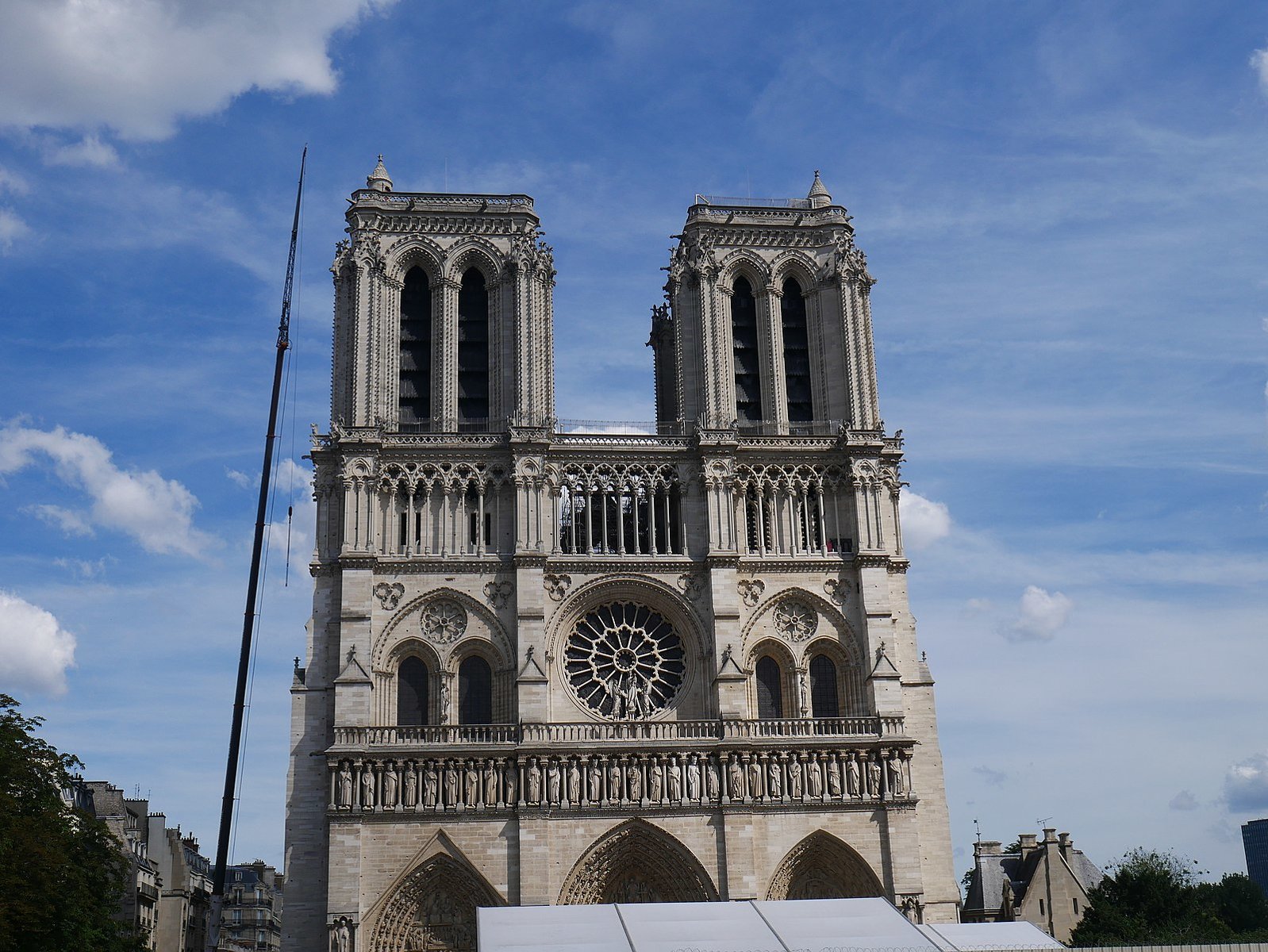