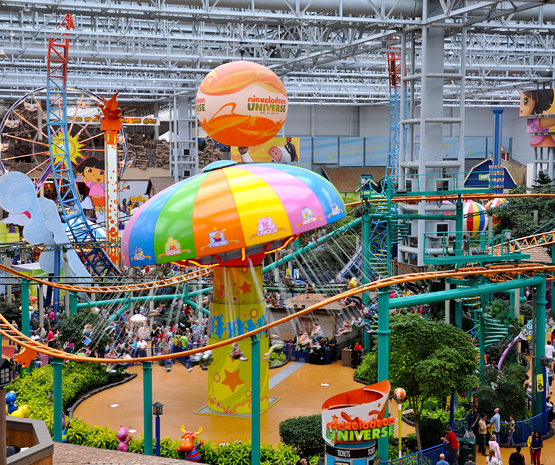 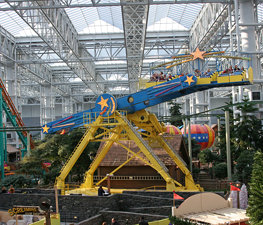 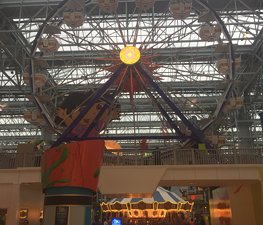 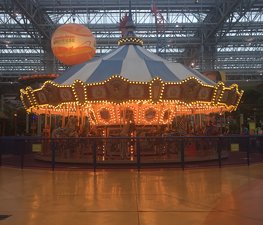 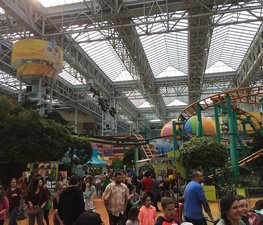 Nickelodeon Universe (originally Knott's Camp Snoopy, later known as The Park at MOA) is the seven acre (28,000 m²) amusement park located in the center of the Mall of America (MOA), in Bloomington, Minnesota, USA.

Nickelodeon Universe is primarily lit by a glass ceiling, which is also the source of most of the heat for the Mall of America. It was originally built by Knott's Berry Farm. The floor has a wide variance in height - the highest ground level in the park is 15 feet (4.6 m) above the lowest. This allows for a far more naturalistic experience than would normally be possible in an indoor amusement park.

I have no idea what this ride is, Mall of America — mcresq65 @ Flickr

The Park has some small roller coasters, but mainly has flat rides due to space constraints. Near the Rugrats Reptarmobiles is the site of home plate for Metropolitan Stadium, which was located on the site of the Mall.

Theming that was removed from the park prematurely and was never replaced include various kites near the ceiling, Charlie Brown and Lucy playing baseball above the Sports grill restaurant (although their baseball remained suspended in the air afterwards), theming in Snoopy fountain, the retheming of Snoopy Boutique the Snoopy Bouncer, and the Snoopy Shop and much smaller theming.

In 2005, there were plans to revitalize the Camp Snoopy image, and a new logo was introduced in October, called the "roller coaster logo" to replace the "canoe logo", however this did not last long as there were even bigger and unexpected changes coming within the next few months.

The Park at MOA

On January 9, 2006, Mall of America management announced that talks between MoA and Cedar Fair Entertainment Co. (which owns the national rights to amusement-park branding of the Peanuts license) had broken down, primarily over the Mall's rights to effectively market its park within and outside of the United States, and effective January 19, the park's Peanuts branding would end, the park being temporarily renamed "The Park at MOA" while new branding was being applied. All traces of the Peanuts branding was removed, some very sloppily, although the gift shops were allowed to continue selling Peanuts merchandise without the Camp Snoopy label. The inflatable Snoopy character was removed and it took several months before it was finally replaced by a generic tree house inflatable. Many other landmarks in the park were either replaced by generic landmarks or not replaced at all.

The park's new licensing deal and name, "Nickelodeon Universe", was announced on July 25, 2007. Construction began on August 27, 2007 with work to be completed in sections so 80 percent to 90 percent of the park remains accessible at all times. Nickelodeon Universe was completed on March 15, 2008.

New rides include SpongeBob SquarePants Rock Bottom Plunge, a Gerstlauer Euro-Fighter style coaster themed after the Nickelodeon show SpongeBob SquarePants, the Splat-O-Sphere, a tower drop-ride in the center of the park, and the Avatar Airbender, a surf-rider attraction located in the center of the park as well. The shooting gallery beneath the Ripsaw/Orange Streak roller coaster was gutted, and was replaced by the Rugrats Reptarmobiles.

The site of the Mystery Mine Ride was completely demolished to make way for SpongeBob SquarePants Rock Bottom Plunge, a new Gerstlauer roller coaster. This site also included an Old Time Photography studio, and restrooms. Old Time Photography relocated into the mall (but not within the park) and restrooms did not return in this section of the park.

Levy Restaurants partnered with Nickelodeon Universe to include a themed restaurant at the park. The restaurant is called EATS, and it is located in the former Park at MOA food court. Recently, the partnership ended. The Eats area closed and was replaced with a Butterfly display.

On March 12, 2008, the Star Tribune reported that the price of ride points, daily wristbands, and, in particular, annual passes would take a significant price hike once the park transitioned to Nickelodeon Universe. The price for an annual pass, which has remained $99 per year since the park opened in 1992, will increase to $250, and daily wristbands will be raised from $24.95 to $29.95. Some decried the price increases as being unjustifiably high, when compared to other parks, such as much larger Walt Disney World at $249.95 and local park Valleyfair at $79.95-$99.95. Others defended the pricing as necessary to accommodate the millions of dollars of investment needed to rebrand the park as Nickelodeon Universe.

The park is free to enter, but the rides require patrons to purchase a varying number of tickets (points), depending upon the type of ride. Unlimited single rider wristbands or season passes are also available.

Jenna Minneapolis
Go during Toddler Tuesdays [If you qualify] or in the evening after 5PM for the best discounts on unlimited ride wristbands. Fun place.

Erik Rowley
I'll say it too I miss Camp Snoopy, but I gained a lot of respect for Nickelodeon for keeping the Paul Bunyan Log Flume. That ride is a classic!

Kerry Blanski
Go to NickelodeonUniverse.com at least 3 business days before you go to the mall and sign up for the Rewards card. It is free and you will receive enough points to buy 1 unlimited ride wristband!

Guy Merrill
Your best bet is to buy a ride wristband. If you get them online you can save a few bucks.

Leilani Andrews
I took my younger brother here, and we both ended up having tons of fun. Especially when it got darker. Perfect for families
Load more comments
foursquare.com
8.0/10
250,459 people have been here
I've been here
Add to wishlist

See all hotels See all
Radisson Blu Mall of America

Days Inn by Wyndham Eagan Minnesota Near Mall of America

Minnehaha Creek is a tributary of the Mississippi River located in

The Guthrie Theater is a center for theater performance, production, 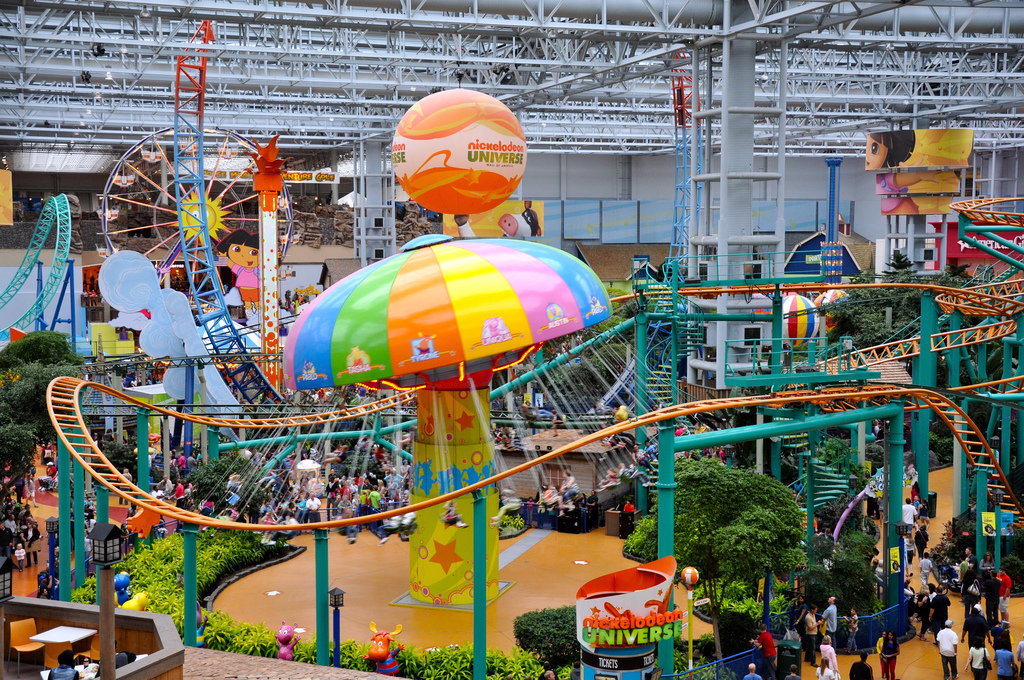 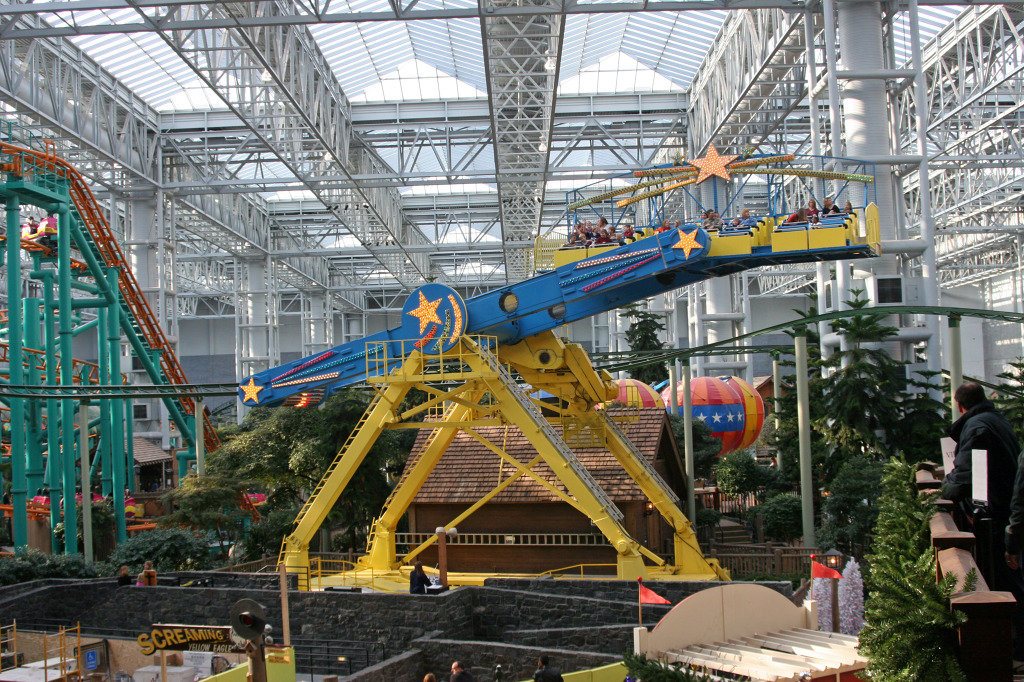 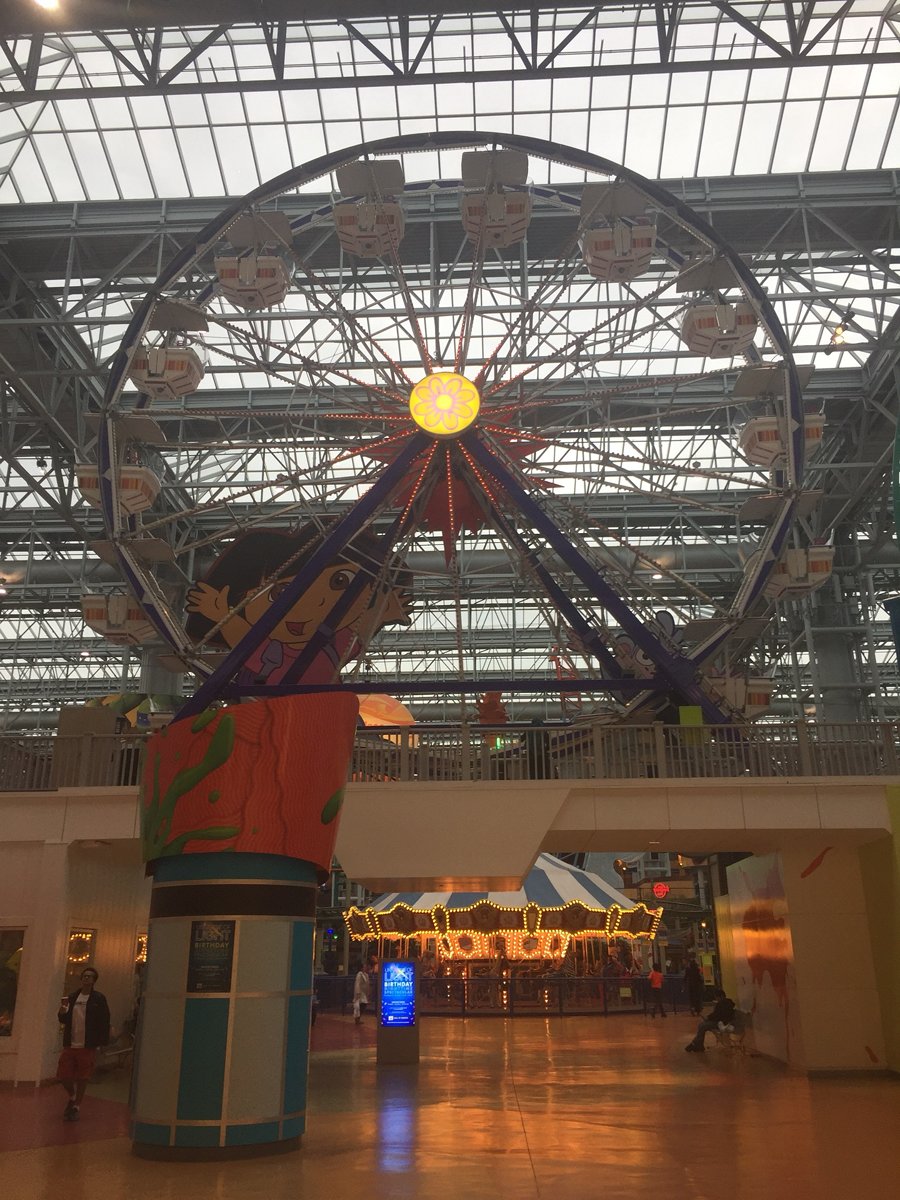 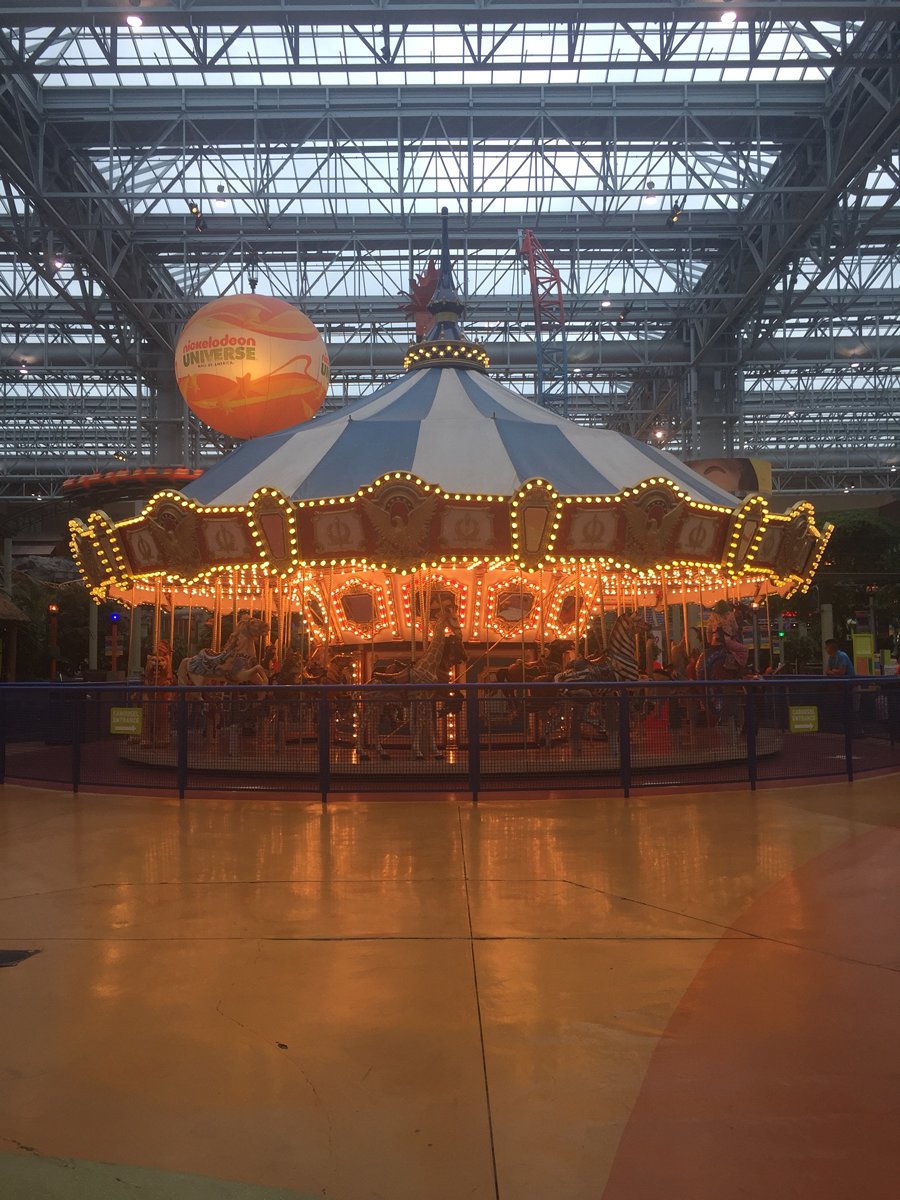 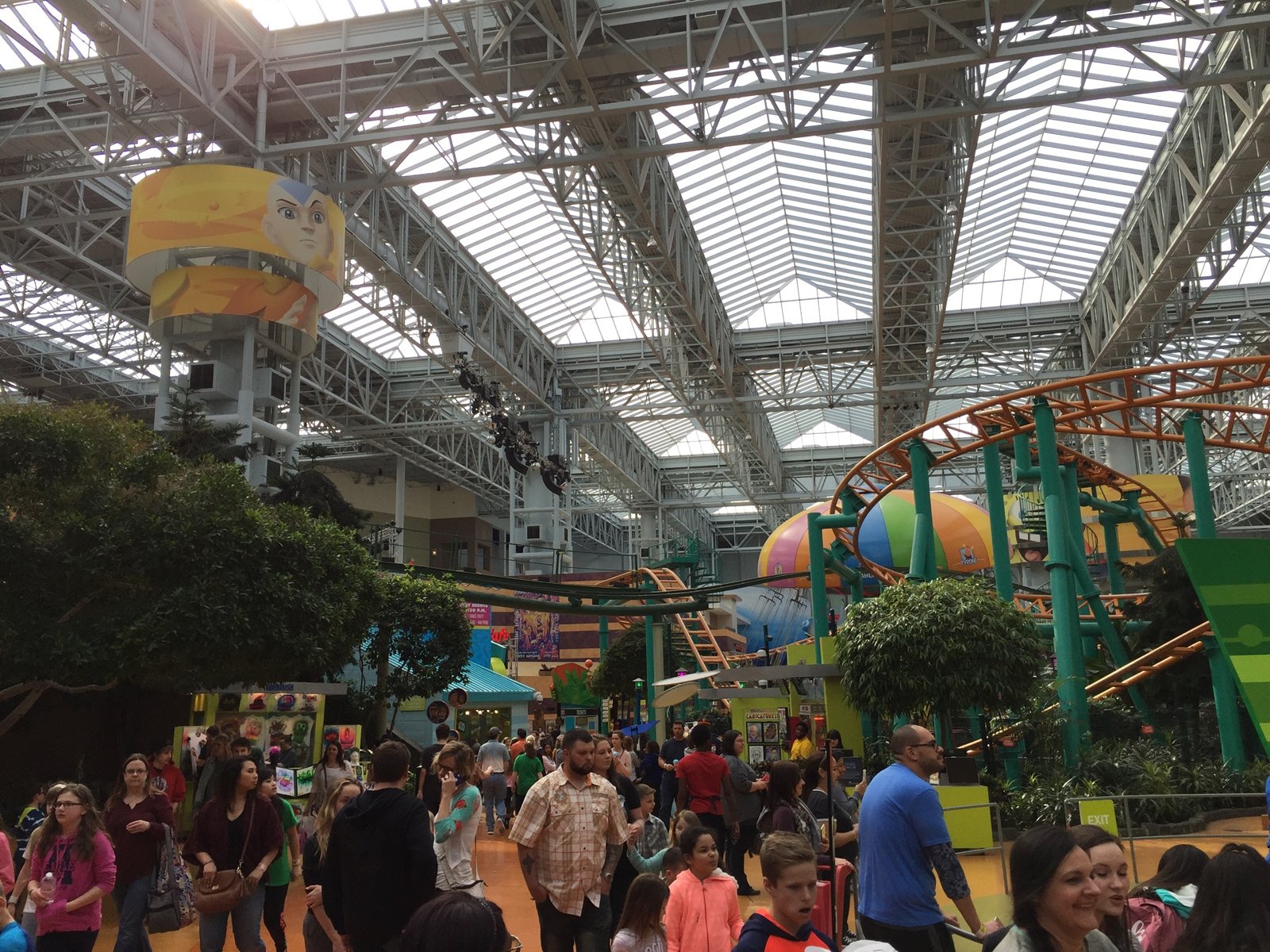 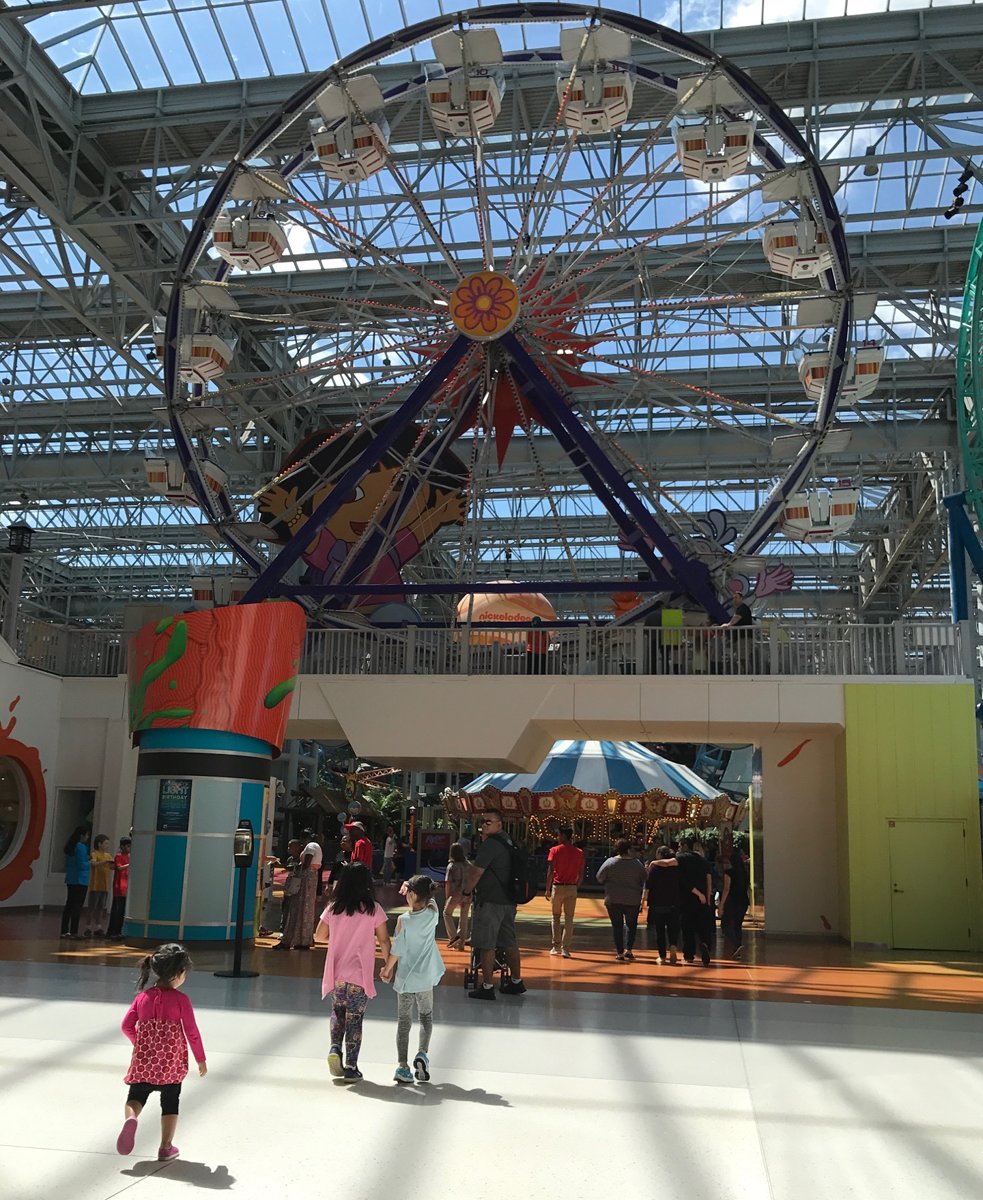 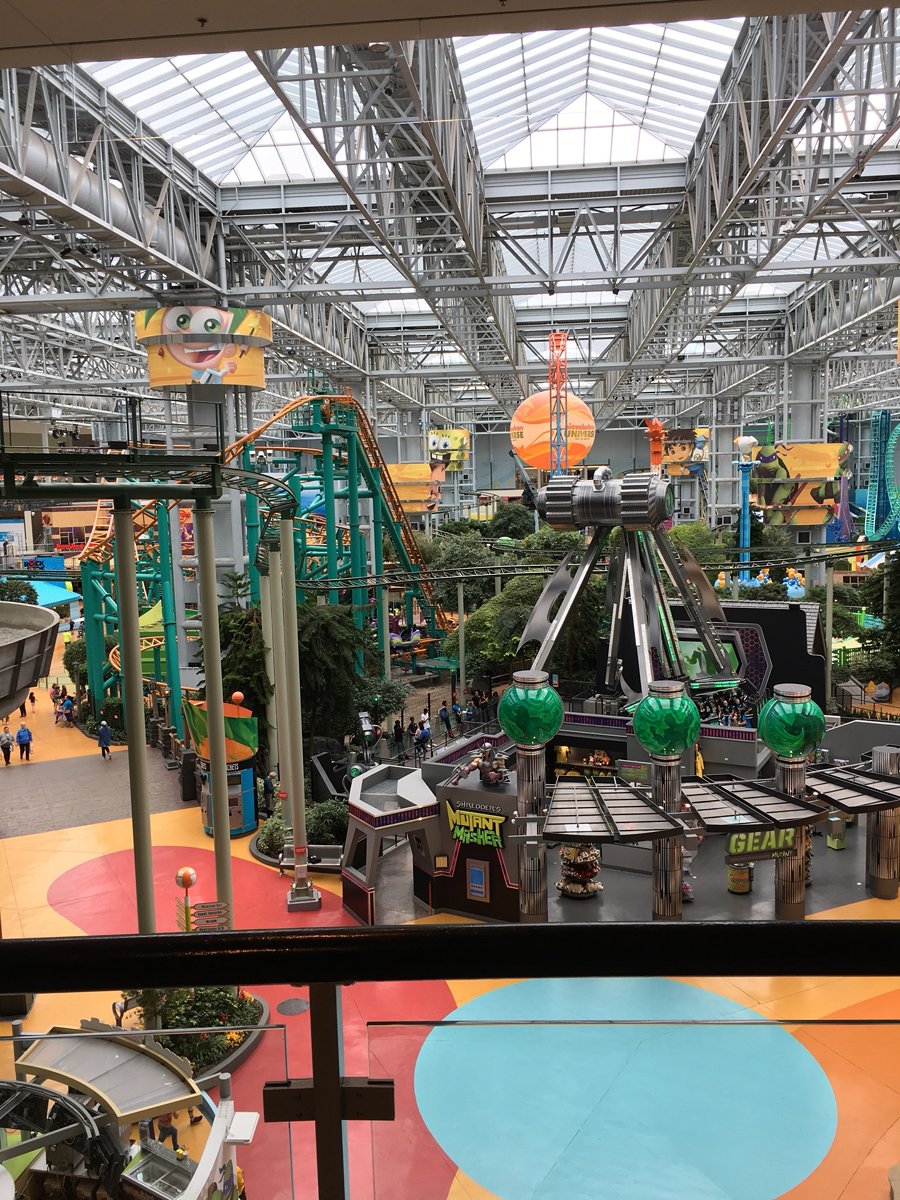 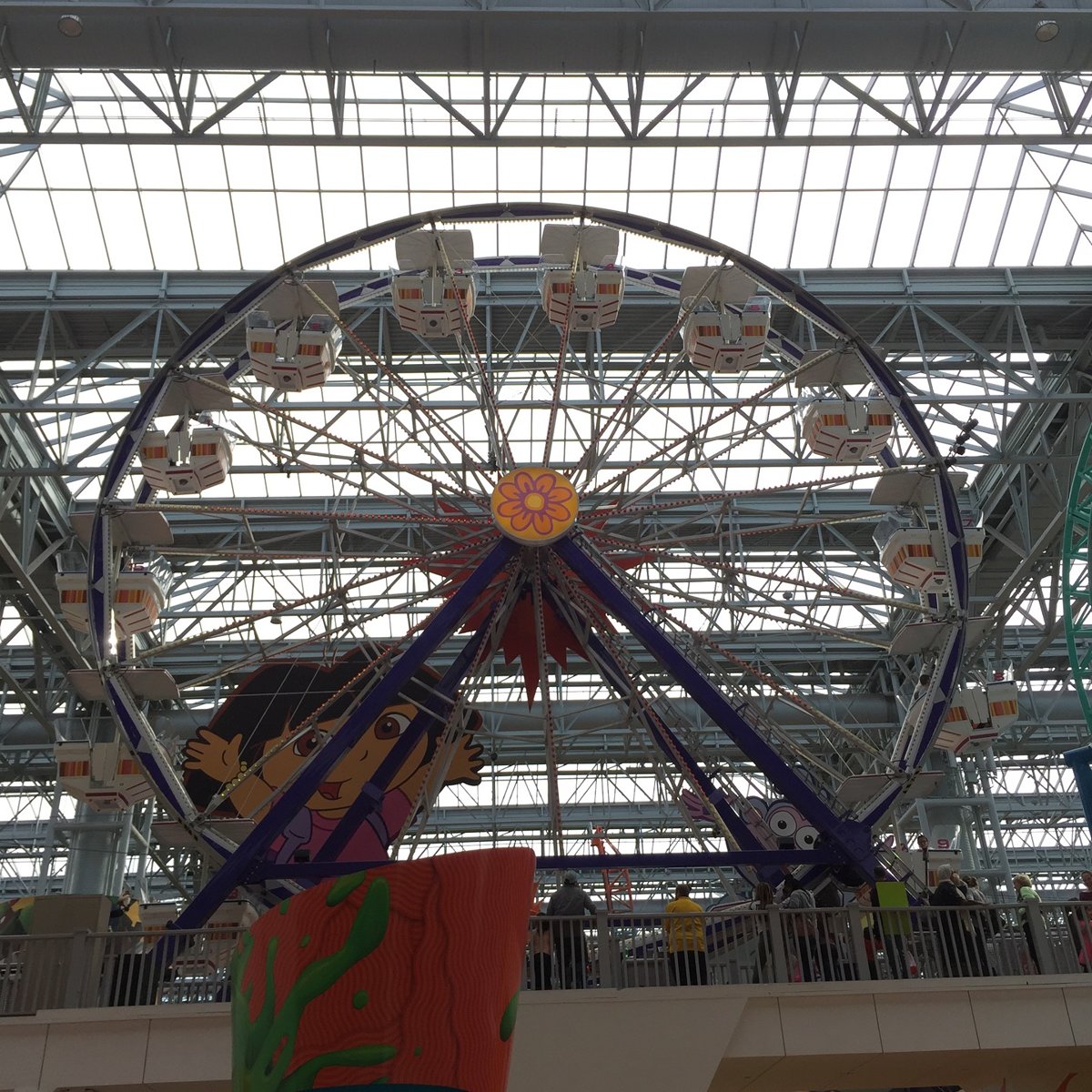 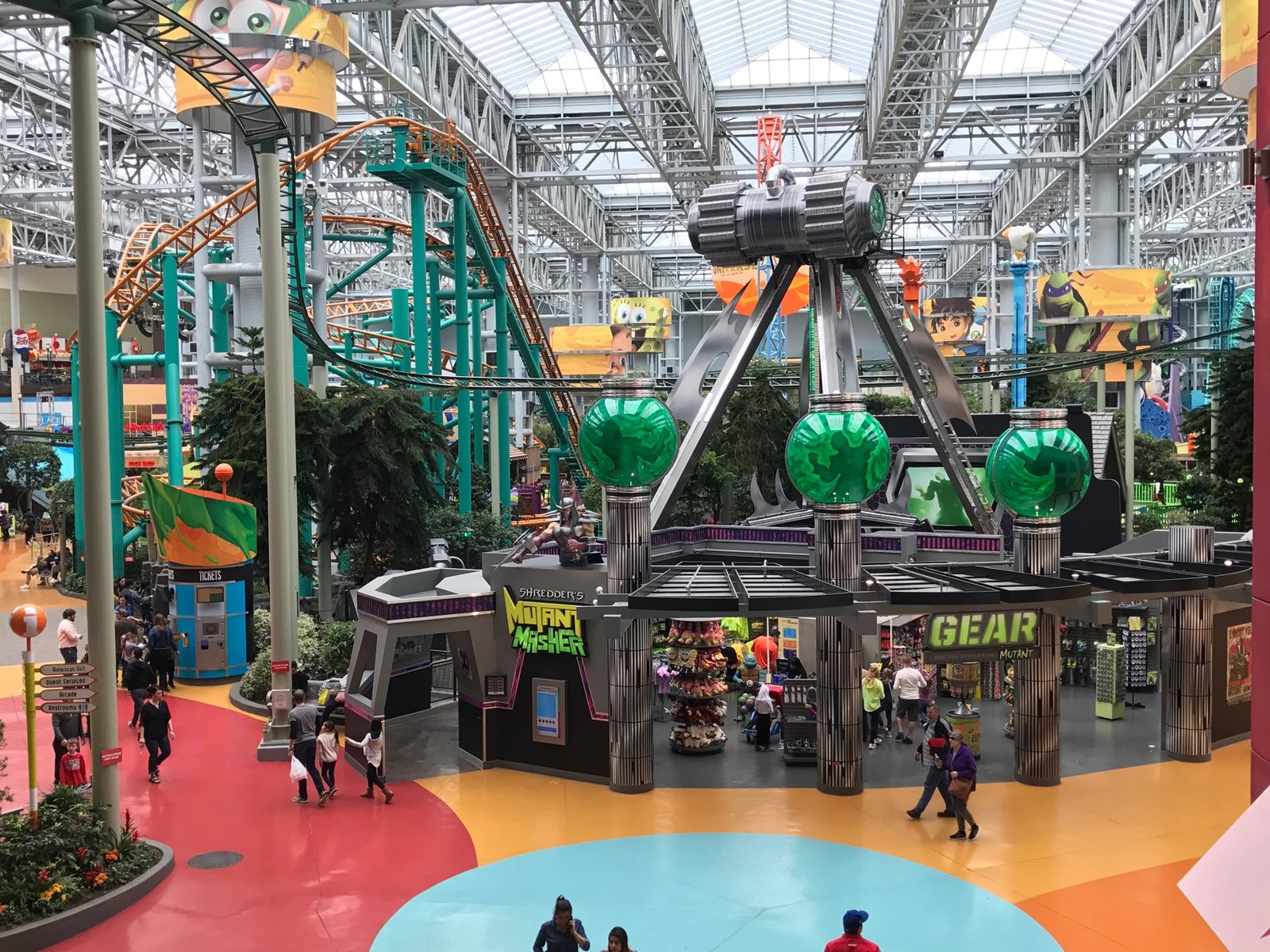 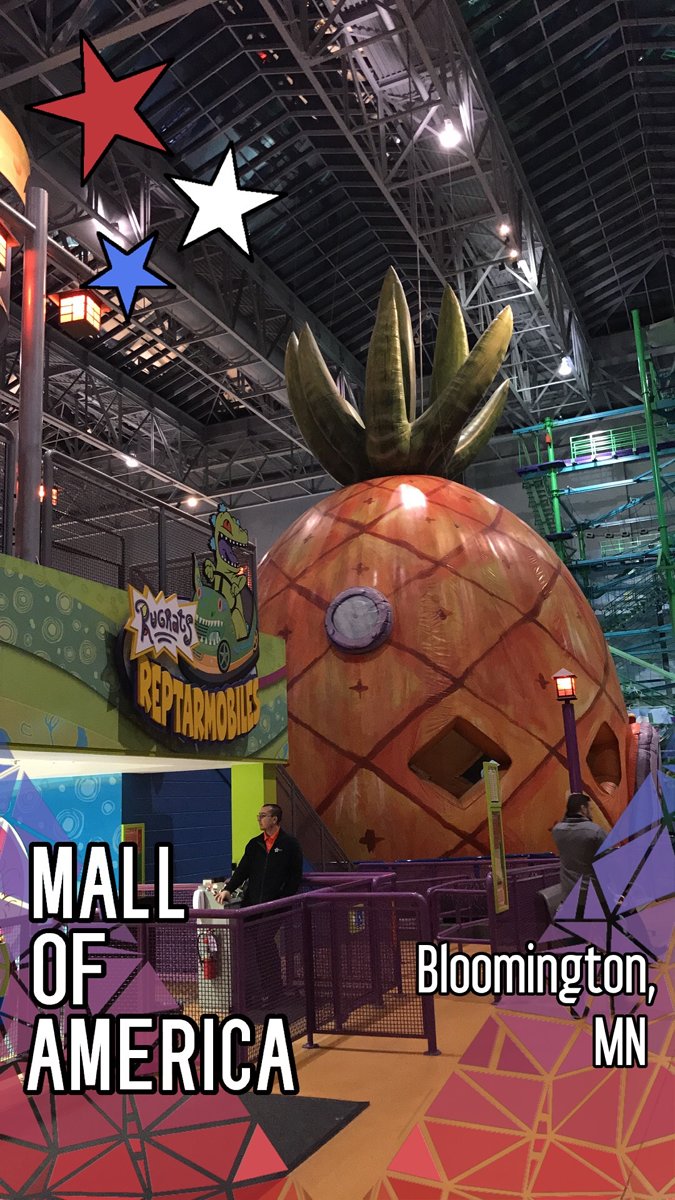 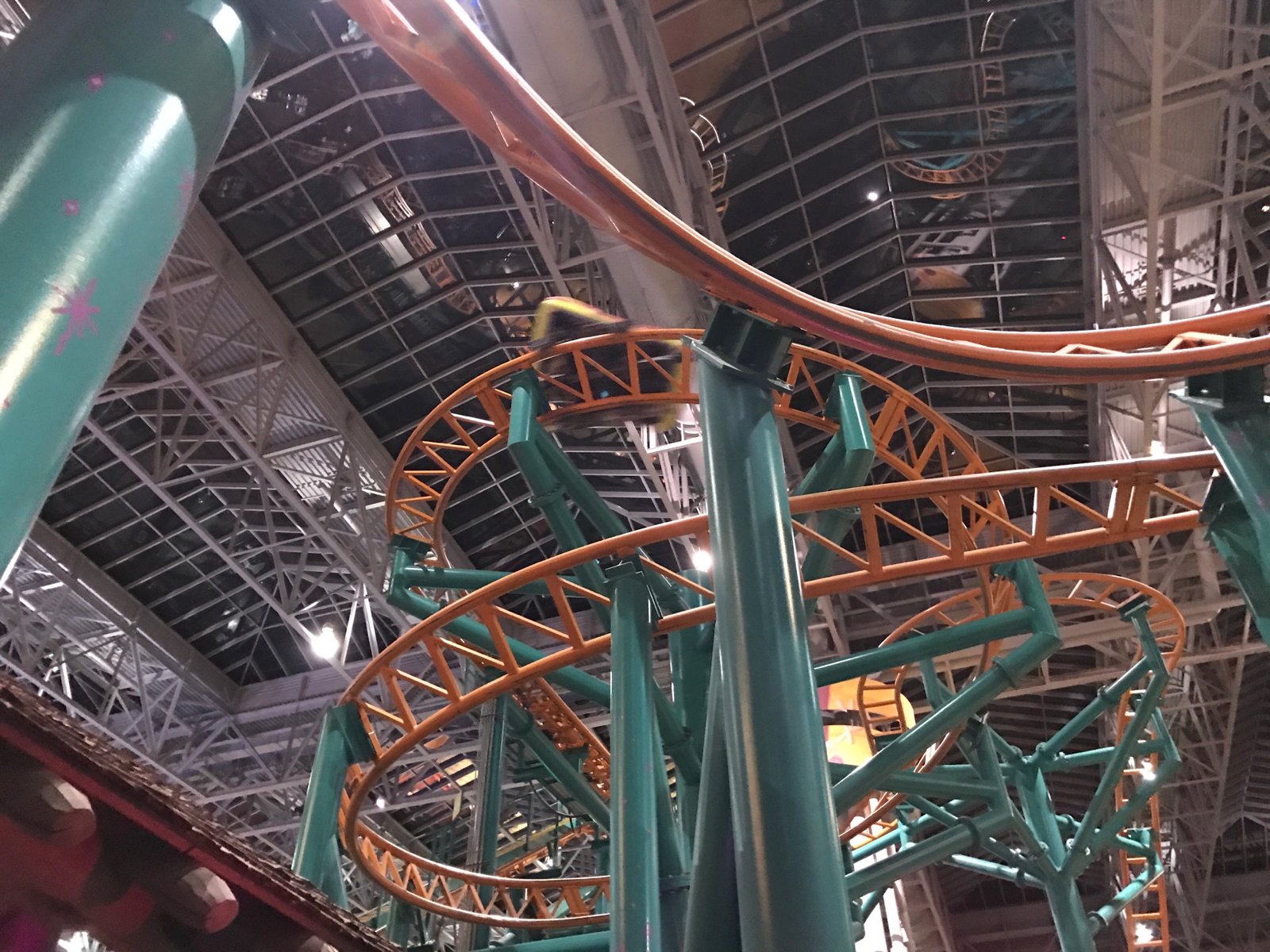 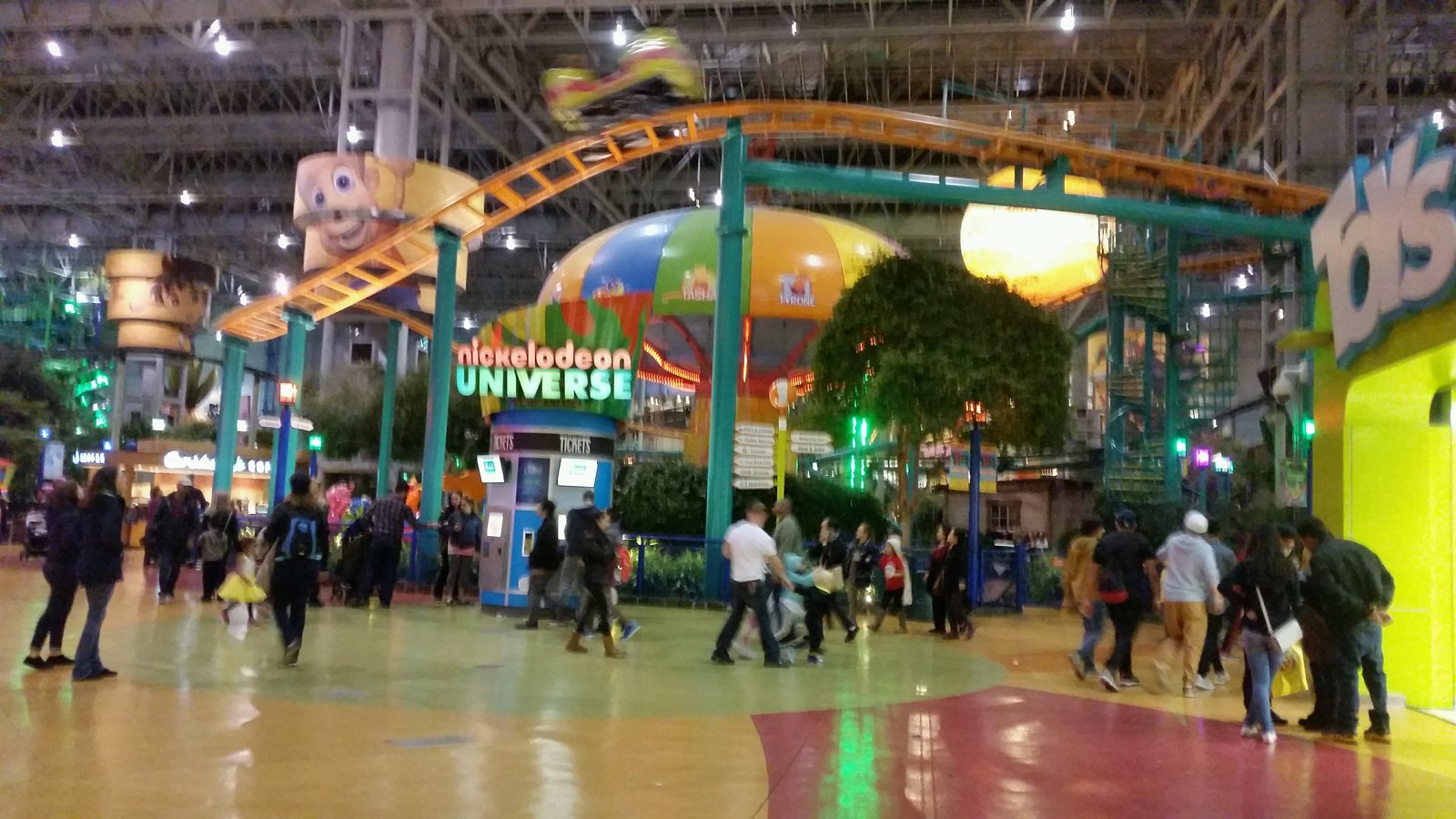 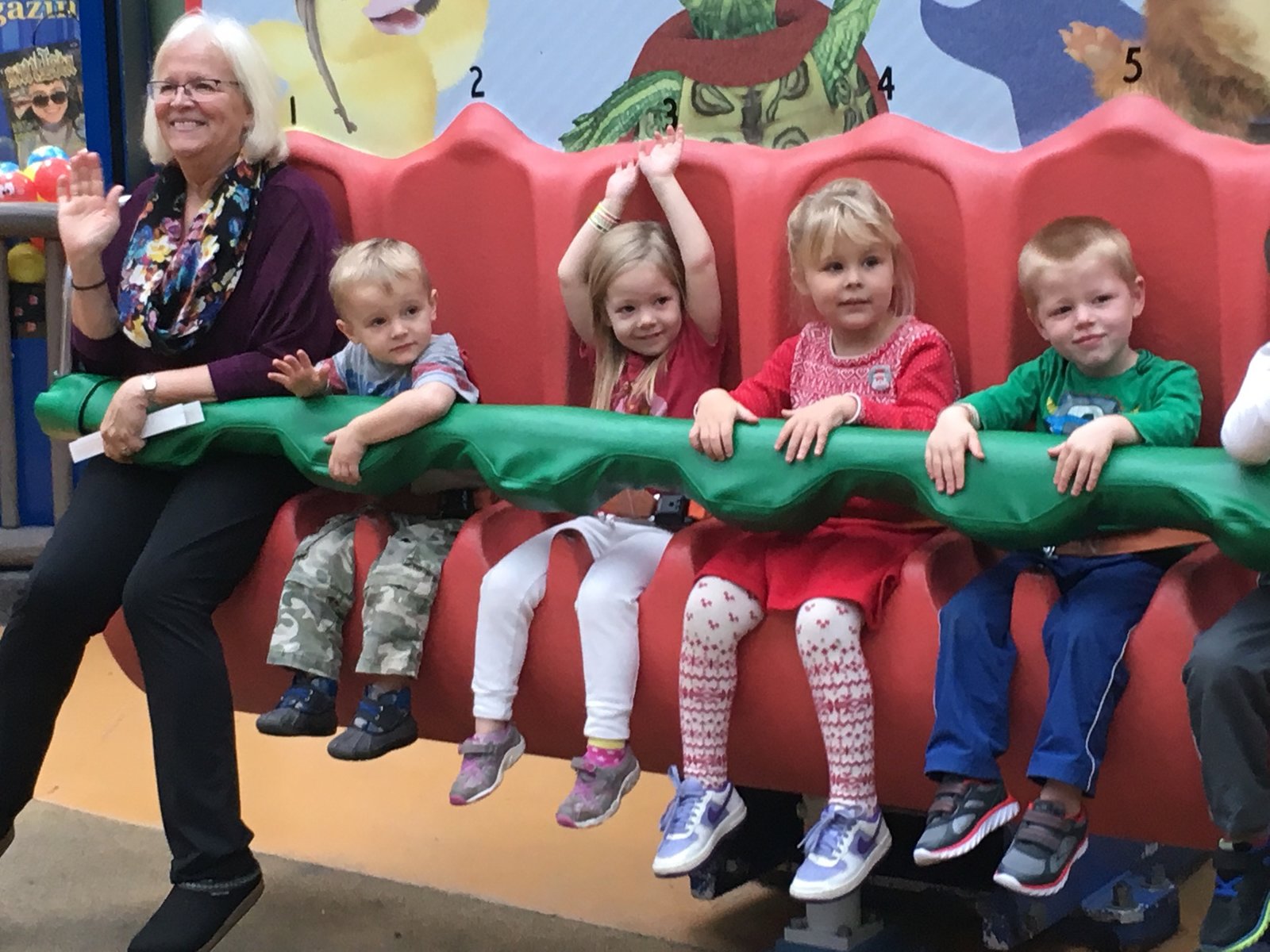 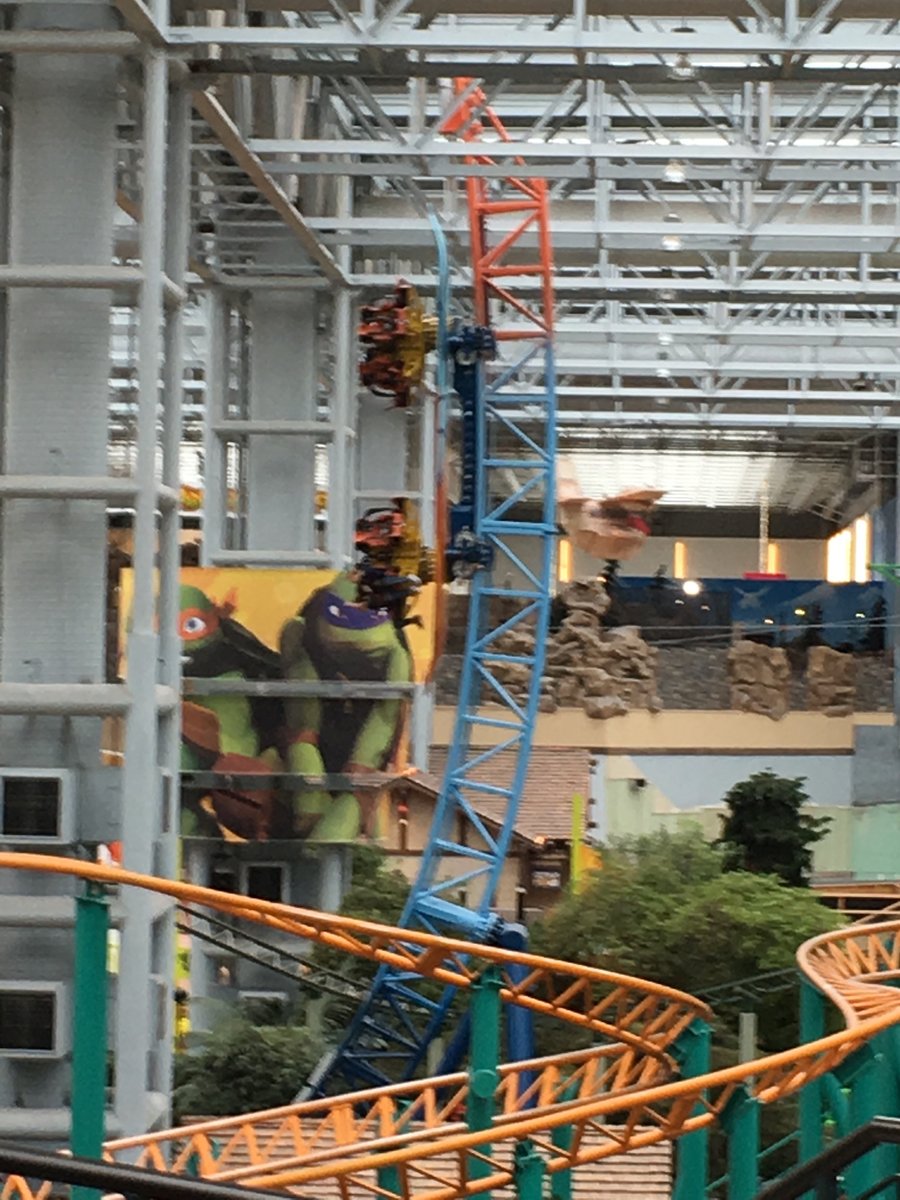 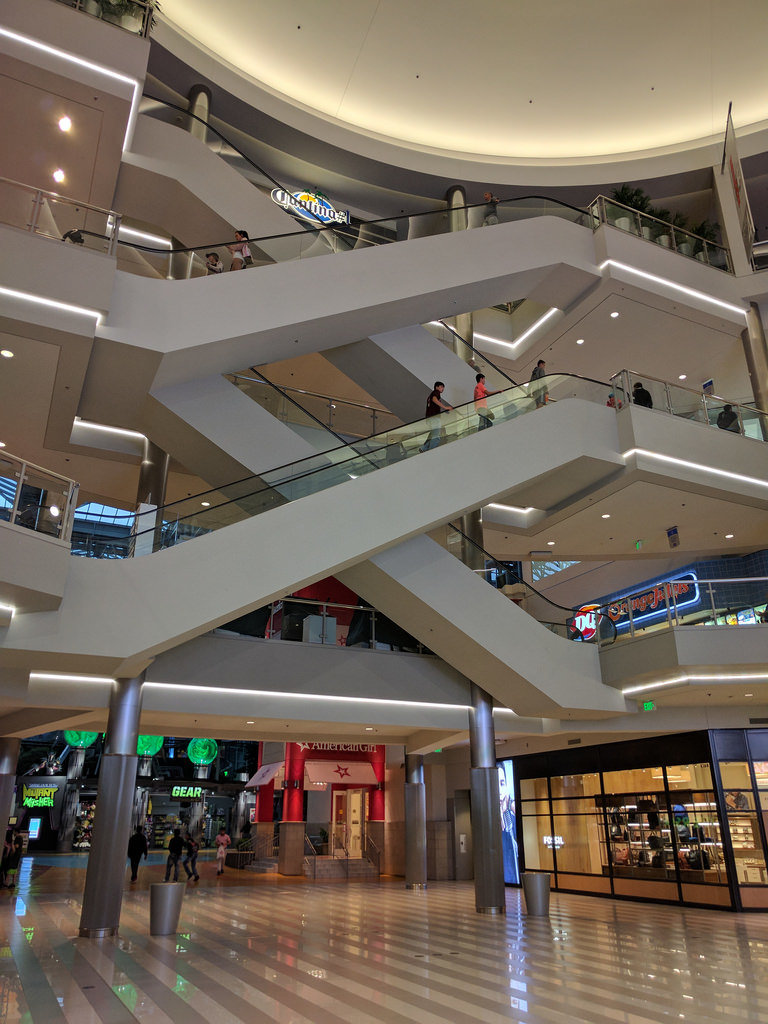 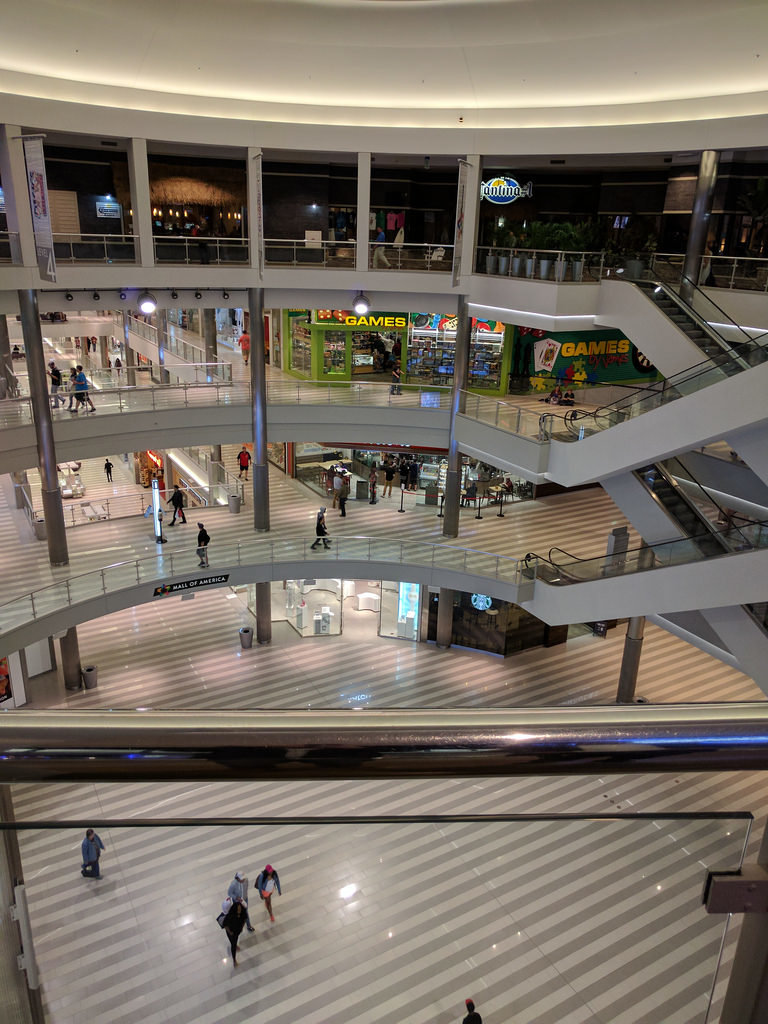 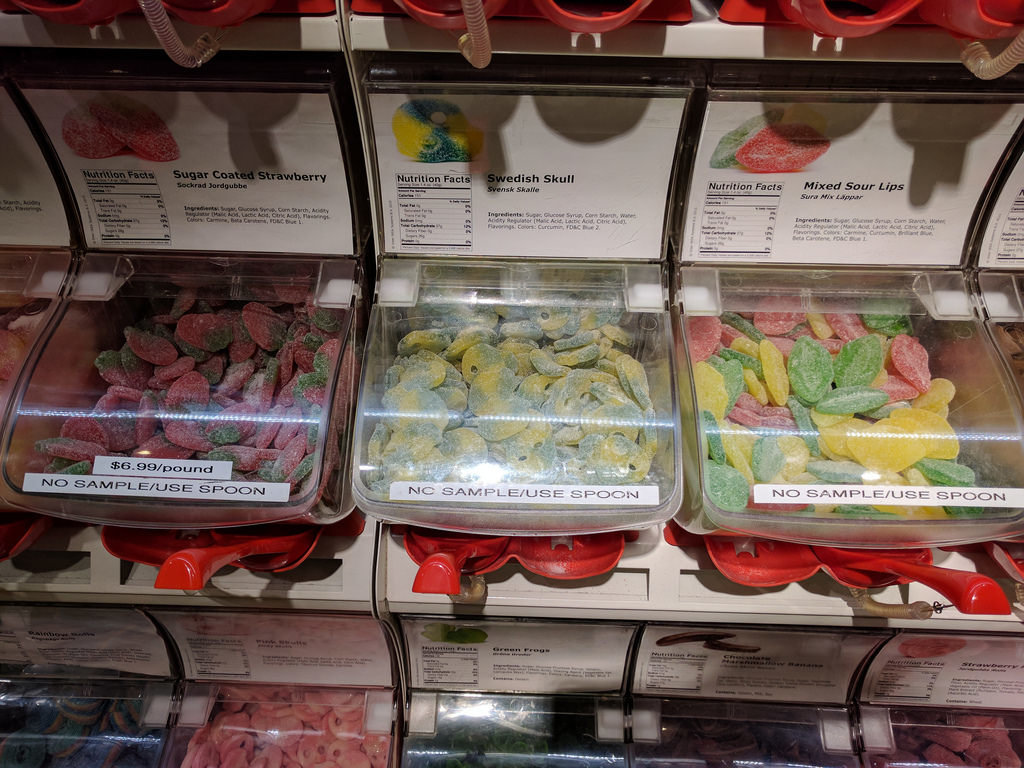 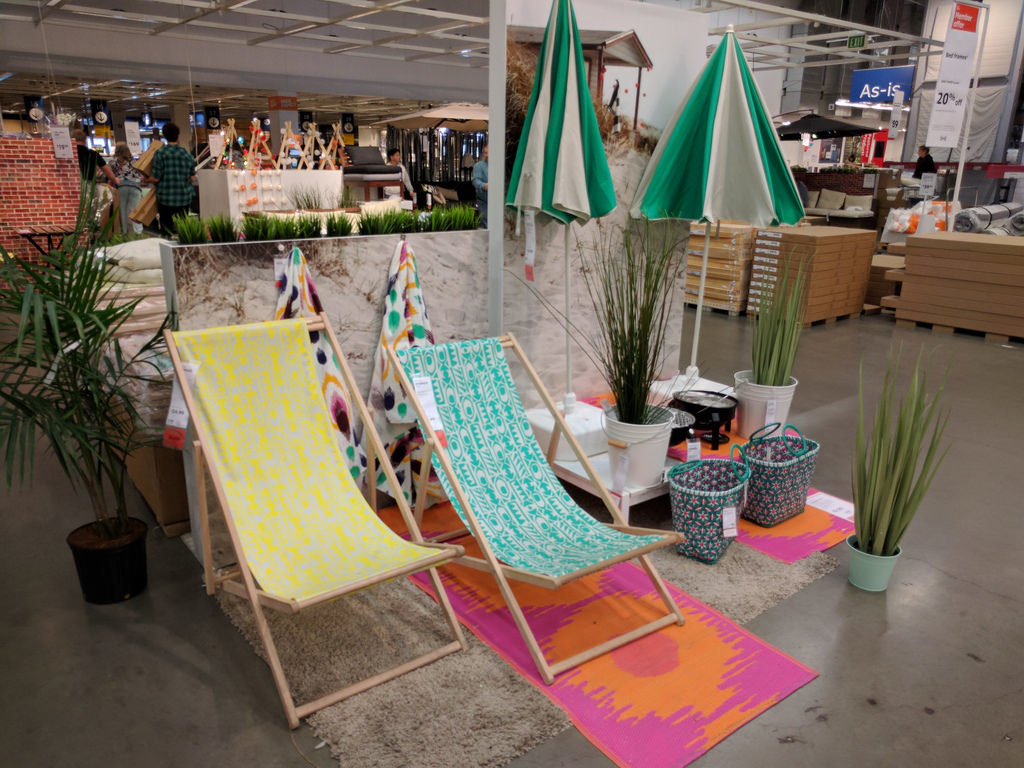 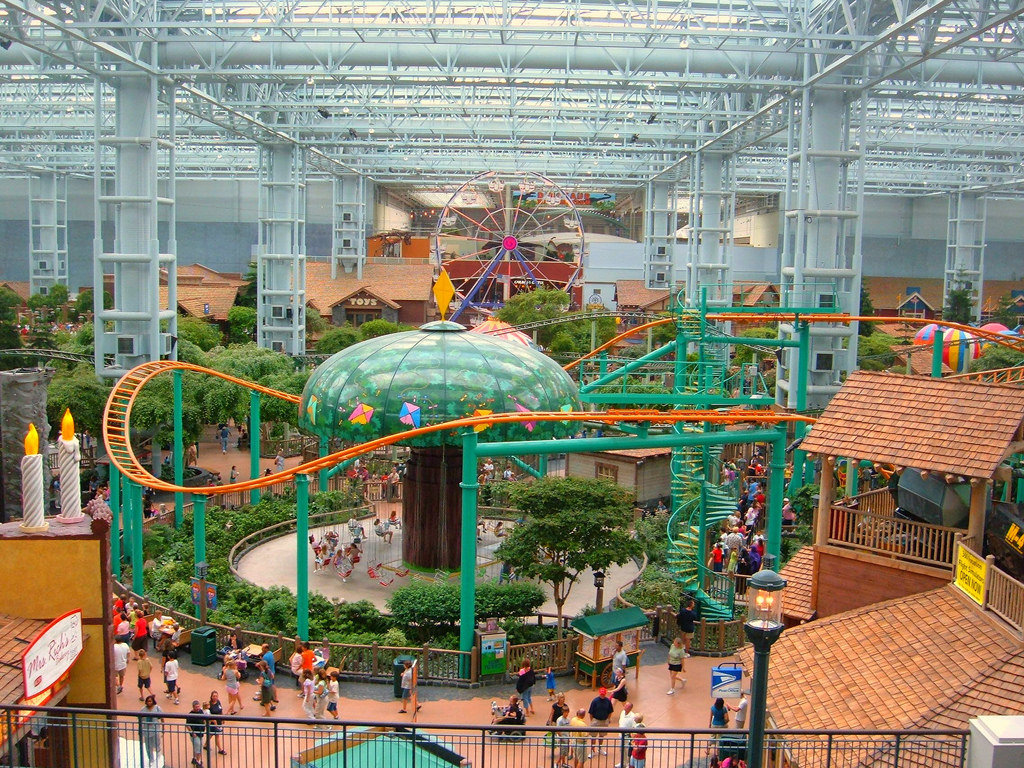 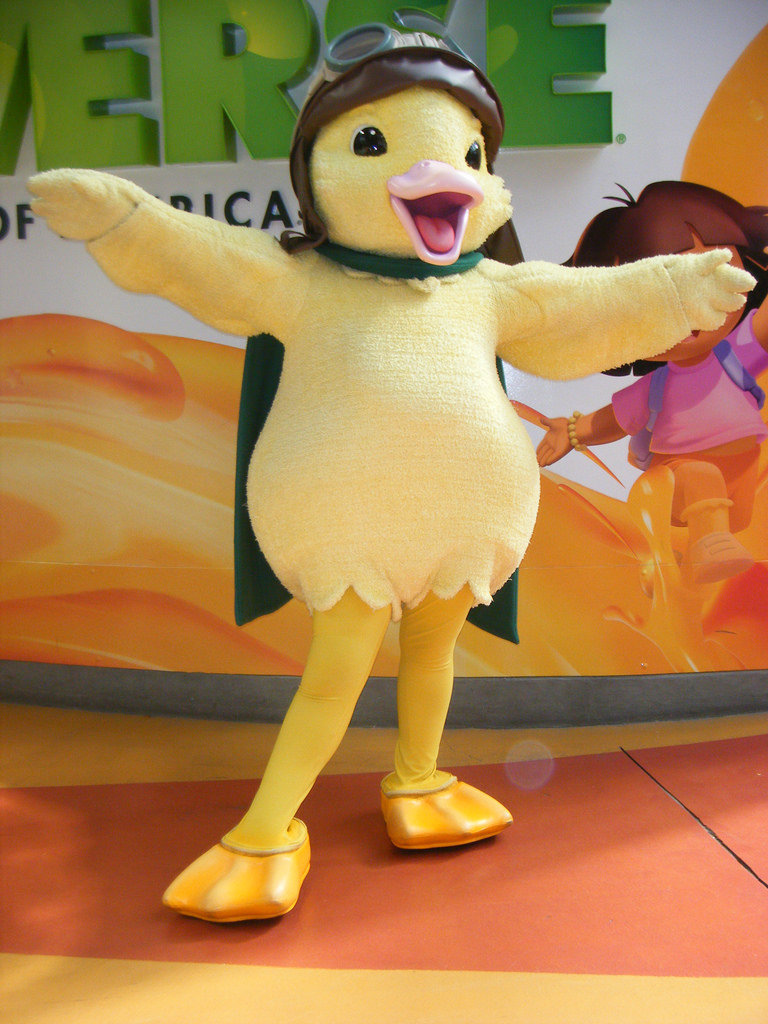