×
What are you looking for?
See all results
Interesting buildings in Chicago 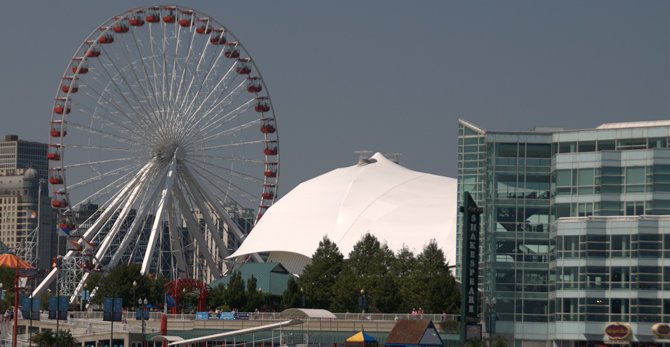 Navy Pier is a 3,300-foot (1,010 m) long pier on the Chicago shoreline of Lake Michigan. It is located in the Streeterville neighbourhood of the Near North Side community area. The pier was built in 1916 at a cost of $4.5 million, equivalent to $90.5 million today. It was a part of the Plan of Chicago developed by architect and city planner Daniel Burnham and his associates. As Municipal Pier #2 (Municipal Pier #1 was never built), Navy Pier was planned and built to serve as a mixed-purpose piece of public infrastructure. Its primary purpose was as a cargo facility for lake freighters, and warehouses were built up and down the pier. However, the pier was also designed to provide docking space for passenger excursion steamers, and in the pre-air conditioning era parts of the pier, especially its outermost tip, were designed to serve as cool places for public gathering and entertainment. The pier even had its own streetcar. Today, Navy Pier is Chicago's number one tourist attraction.

Construction began in 1914 under the leadership of Charles Sumner Frost and took two years, at a total cost of $4.5 million. When it opened to the public in 1916, it was the largest pier in the world. The Pier was built both to handle shipping and as an entertainment site. The original Burnham Plan proposed five piers, but only one was commissioned. In 1917-18, during World War I the pier housed many soldiers, the Red Cross, and Home Defense units. In years to follow the pier expanded to have its own streetcar line, a theater, and an emergency room. In 1927 the pier was officially named Navy Pier in honor of the Naval personnel that served there during the war.[1]

During construction, 1915. Chicago Daily News photo. Even as Chicago Municipal Pier was being built, mass-produced cars and trucks were beginning to wreak havoc on the package freight and passenger steamboat industries of Lake Michigan. The pier proved to be much more successful as a public gathering place. By the late 1930s, the pier was described as a summer playground, with recreational facilities that included picnicking areas, dining pavilions, a dance hall, auditorium, and children's playground. During the 1950s, it is estimated that an average of 3.2 million visitors frequented the pier annually, with peak attendance for the "Pageant of Progress". This decade is sometimes called the pier's "Golden Age".

During World War II the pier returned to serious marine purposes, as the city leased the pier to the U.S. Navy as a training center. The Navy's air group training arm docked a pair of converted flattops at the pier, the USS Wolverine and the USS Sable (IX-81), to use as freshwater training carriers. During this period, some 60,000 sailors and 15,000 pilots, including President George H. W. Bush, trained at the pier.

With the war over, Navy Pier went to the University of Illinois, which used the facility beginning in 1946 for a two-year undergraduate program to educate returning veterans. During its University of Illinois days, Navy Pier was also the site of a string of public events. The International Exhibitions of the early 1960s drew attractions from around the world, including circus and folkloric dance acts, arts and crafts, and international cuisine. In 1965, the University moved to the Chicago Circle campus, and the pier again fell into disuse.

Navy Pier from the John Hancock Building From 1965–1989, Navy Pier was considered underutilized.

In 1976, Navy Pier began its third life as an area for public exhibits, when the East Buildings (furthest into Lake Michigan) were opened as exhibition halls. Special events including music and arts festivals (ChicagoFest was one) began to draw crowds to the pier despite its aging infrastructure.

In 1989, the Metropolitan Pier and Exposition Authority took control over the pier. Major renovation and construction followed in the 1990s at a cost of US$200 million. As rebuilt in the 1990s, the pier's layout included fast-food kiosks, shops, a ballroom, a concert stage, and convention exhibition halls.

The pier now features a large front lawn showcasing numerous larger-than-life public art sculptures and an interactive animated fountain created by WET (of Fountains of Bellagio fame). The pier continues to be used as an embarkation point for tour and excursion boats and is a popular place to watch lakefront events, including the annual Air and Water airshow and the parade of lighted and decorated boats during Chicago's Venetian Night festival.

Navy Pier attractions include sightseeing tours from companies such as Seadog I, II, IV, and Extreme, Shoreline Sightseeing cruises and Water Taxi service, and the Tall Ship Windy. There are also dinner cruises by Entertainment Cruises, on their ships the Spirit of Chicago, The Odyssey II, and the Mystic Blue. Other attractions include rides like the Ferris Wheel along with many seasonal festivals for Halloween and Christmas. The pier has fireworks on Wednesday and Saturday nights during the summer and Friday and Saturday nights during the fall.

The popular Strictly Sail boat show and Chicago Flower and Garden Show are held at the Pier as well as many other fairs and expositions throughout the year. Also a part of Navy Pier is the Children's Museum with many different exhibits and activities for both children and adults to enjoy while visiting the museum.[2][3] The pier also has an IMAX theater, and the Smith Museum of Stained Glass Windows, many of which were salvaged from Chicago mansions.

Navy Pier logo as of 2008. On January 13, 2006, the Metropolitan Pier and Exposition Authority released plans for a major renovation of the pier which would include a monorail, a 260-foot (79 m) spokeless Ferris wheel, a roller coaster, floating hotel, and an 80,000-square-foot (7,000 m2) water park with a Great Lakes theme. The plan would include nearly double the current parking and a replacement theater with a greater capacity. At the time of the announcement, a price tag of $2 billion was announced. No concrete progress was made on those proposals as the financial condition of the Pier suffered with the recession.

Following the reorganization of the agency that runs Navy Pier and McCormick Place, a new study was commissioned to reinvigorate the upgrade process. The new study, by the Urban Land Institute, was released on November 11, 2010, and recommends a more modest set of enhancements aimed at retaining the Pier's role as a public space, rather than turning it into a theme park. Suggested elements include a concert venue, an enlarged Chicago Shakespeare Festival space, new restaurants, a renovated commercial area around the Pier's entrance, and additional park-like features to bring people closer to the lake. If the Children's Museum moves, the plan also suggests replacing it with another attraction focused on children. More grandiose possibilities, including the enlarged Ferris wheel and a hotel, are mentioned as more remote possibilities.

Fodor's Travel
Navy Pier is fun, especially for families. Everyone can fan out to shop in the mall, play minigolf in Pier Park in summer, see a movie at the IMAX Theatre, or explore the Chicago Children's Museum.

Negin NG
Gorgeous lakefront establishments with a marvelous view of Chicago skyline. Restaurants, entertainment centers & the most impressive stained glass collection ever. Had some tasty sword fish for lunch.

Alix Record
Not just a big city kiddie heaven. views are the best in Chicago. You can get some very good food here. The boat rides are varied and well worth it. Just strolling outside is frat people watching too!

Jonathan Ferrera
This is very tourist-y. The 4th of July fireworks is one of very few reasons to visit. Still, it is a wonder to enjoy on less-busy days.

Sankesh Jain
The renovations have really changed this place a lot. It looks gorgeous. A nice place to spend some time with family and friends and go around eating and relaxing.

The Chicago Spire is a partially constructed supertall skyscraper in

The Chicago Harbor Lighthouse is an automated active lighthouse, and

The Bibliotheca Alexandrina (Latin for 'Library of Alexandria'; in 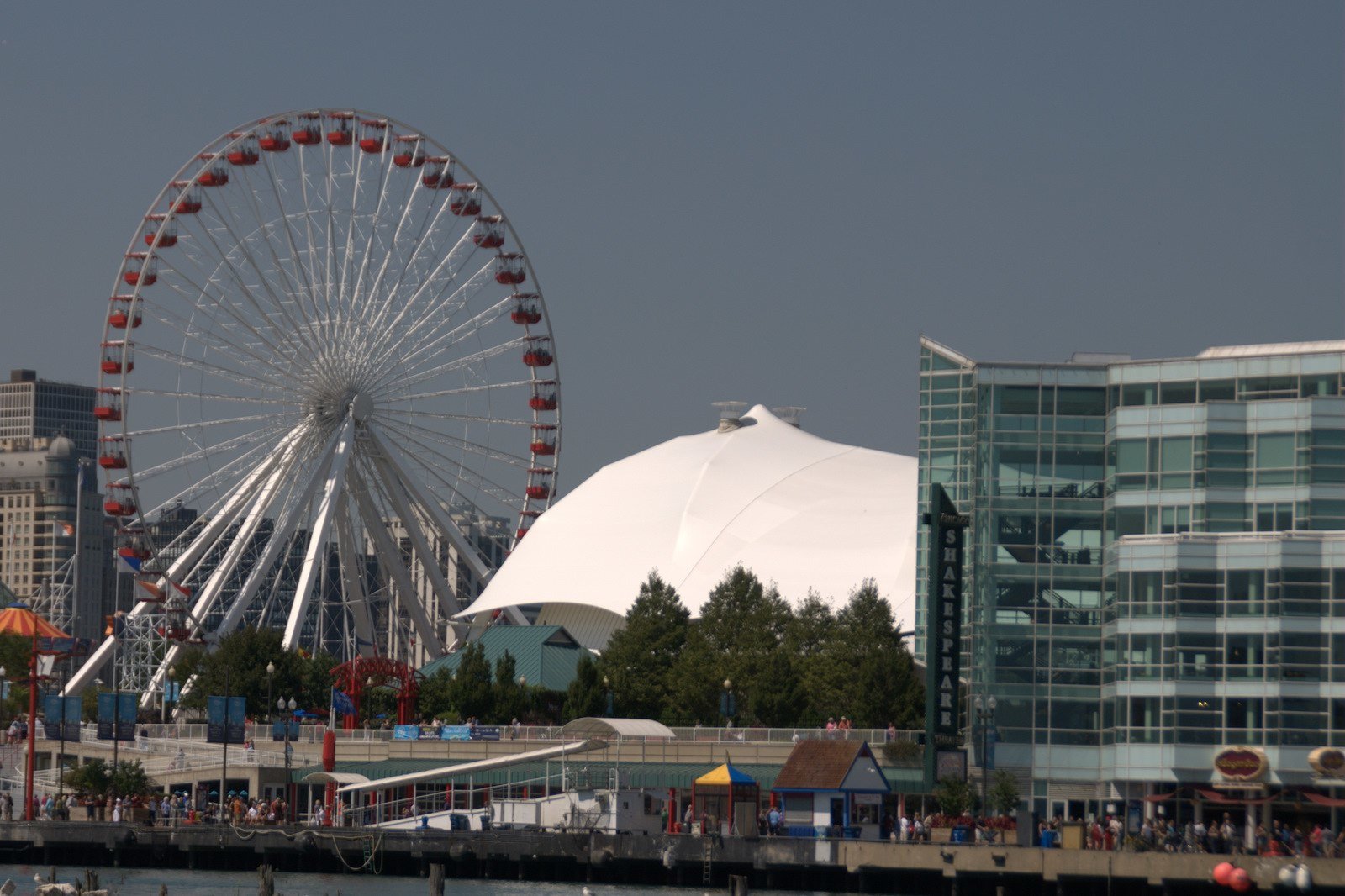 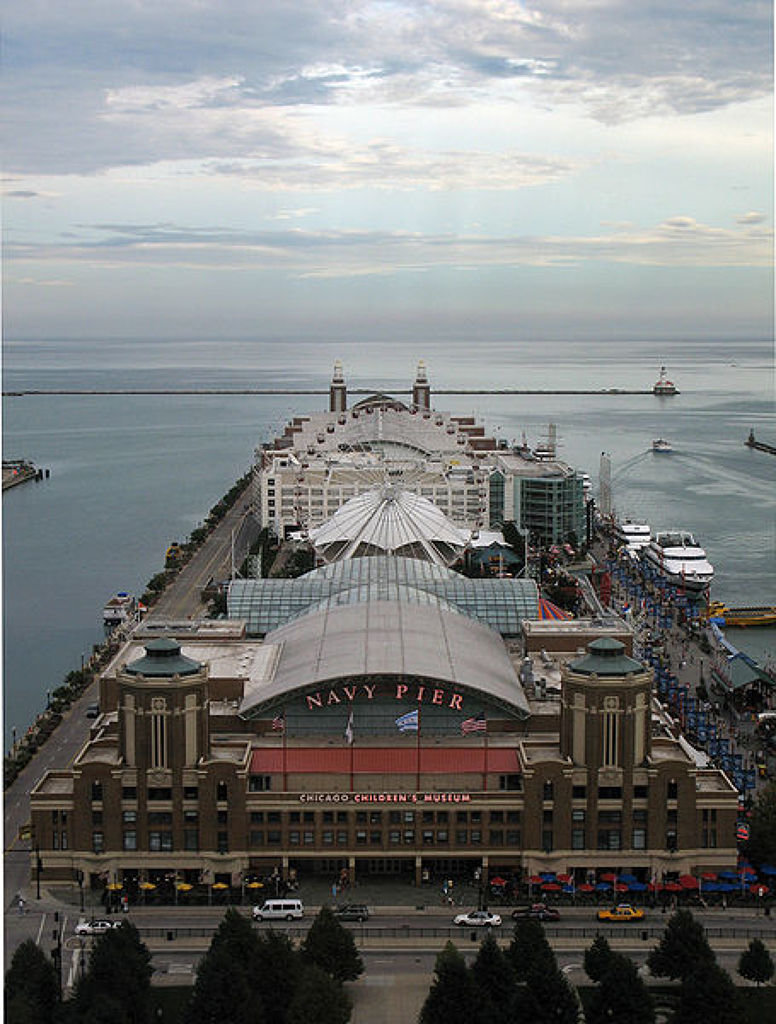 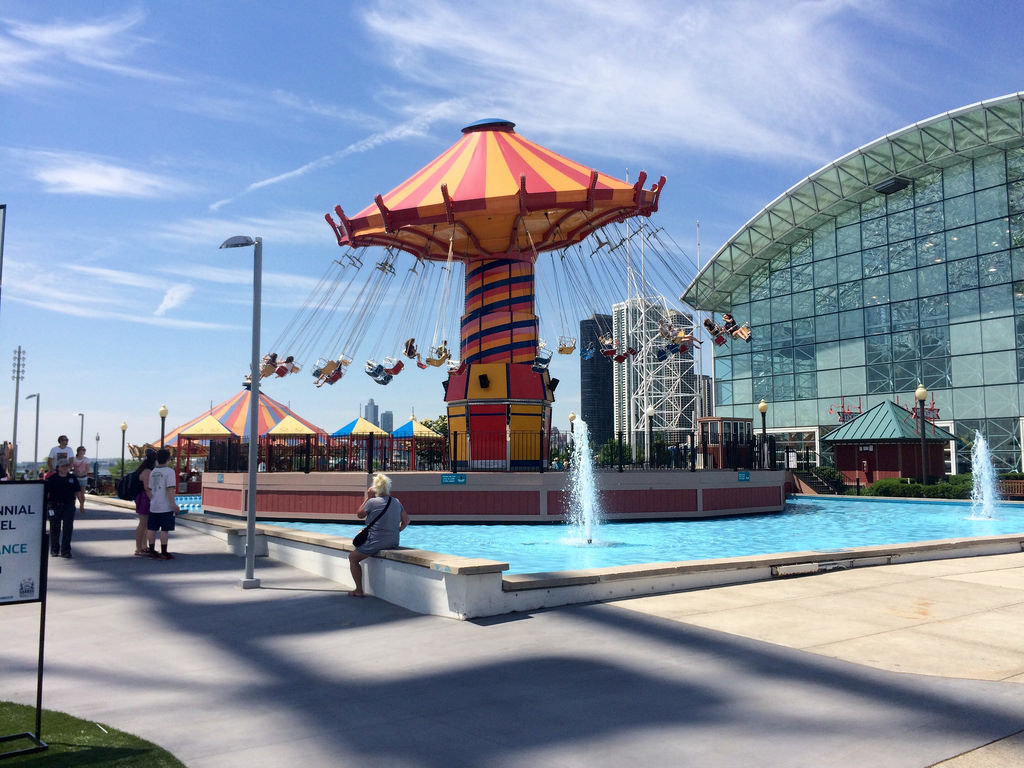 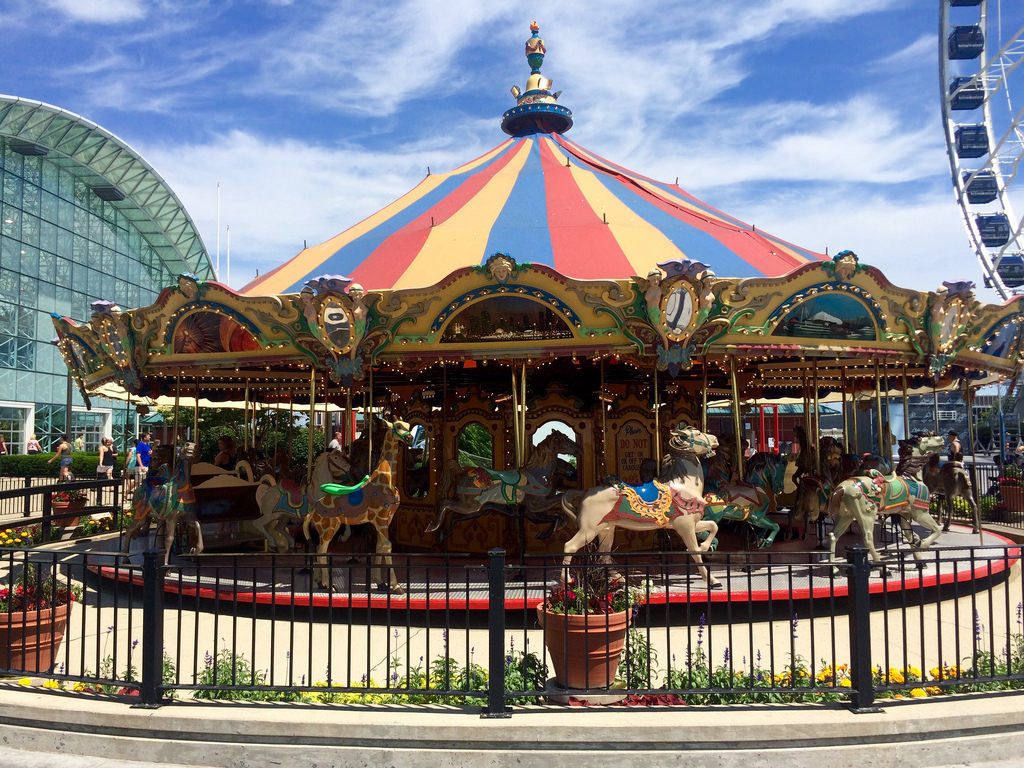 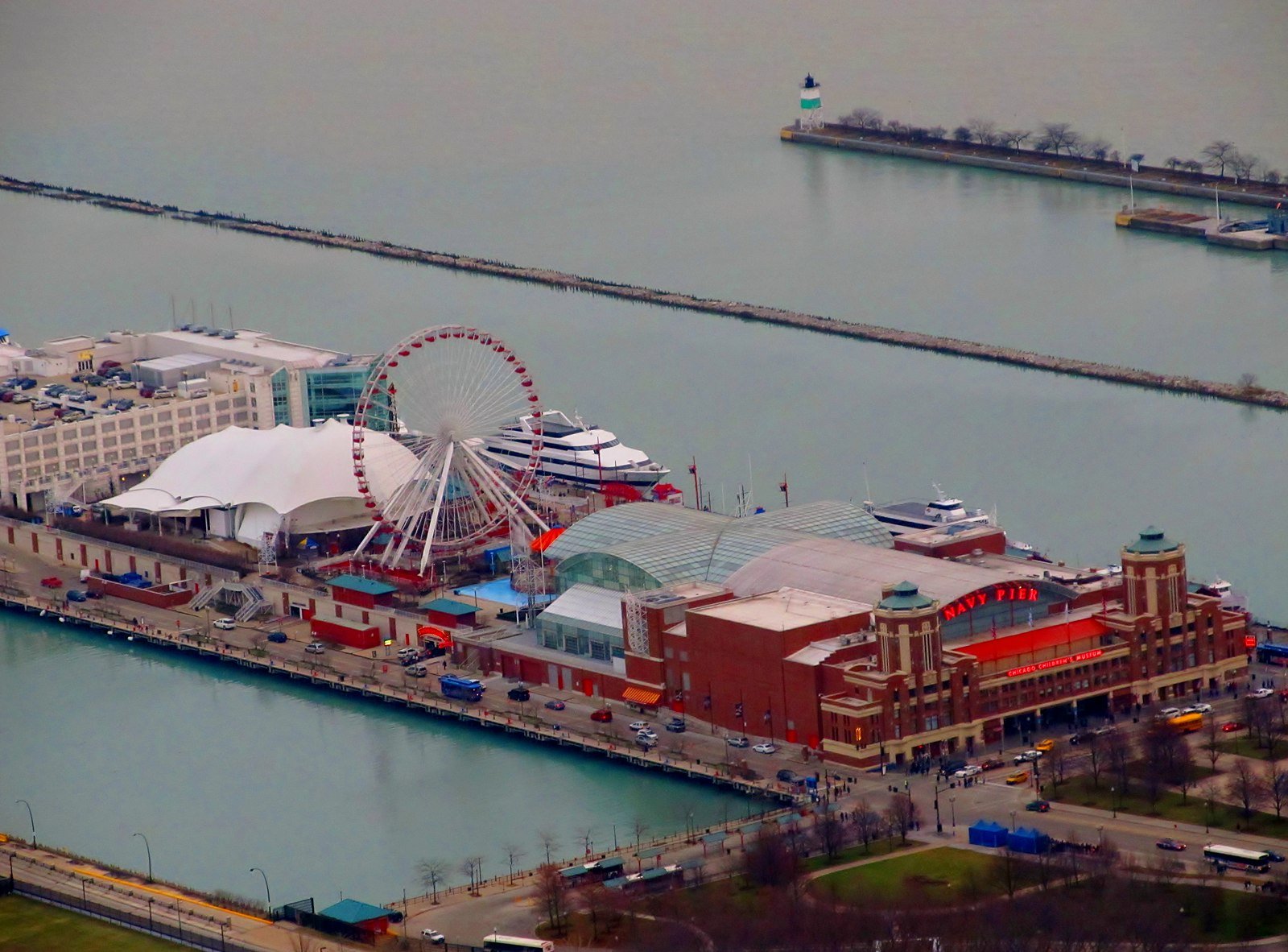 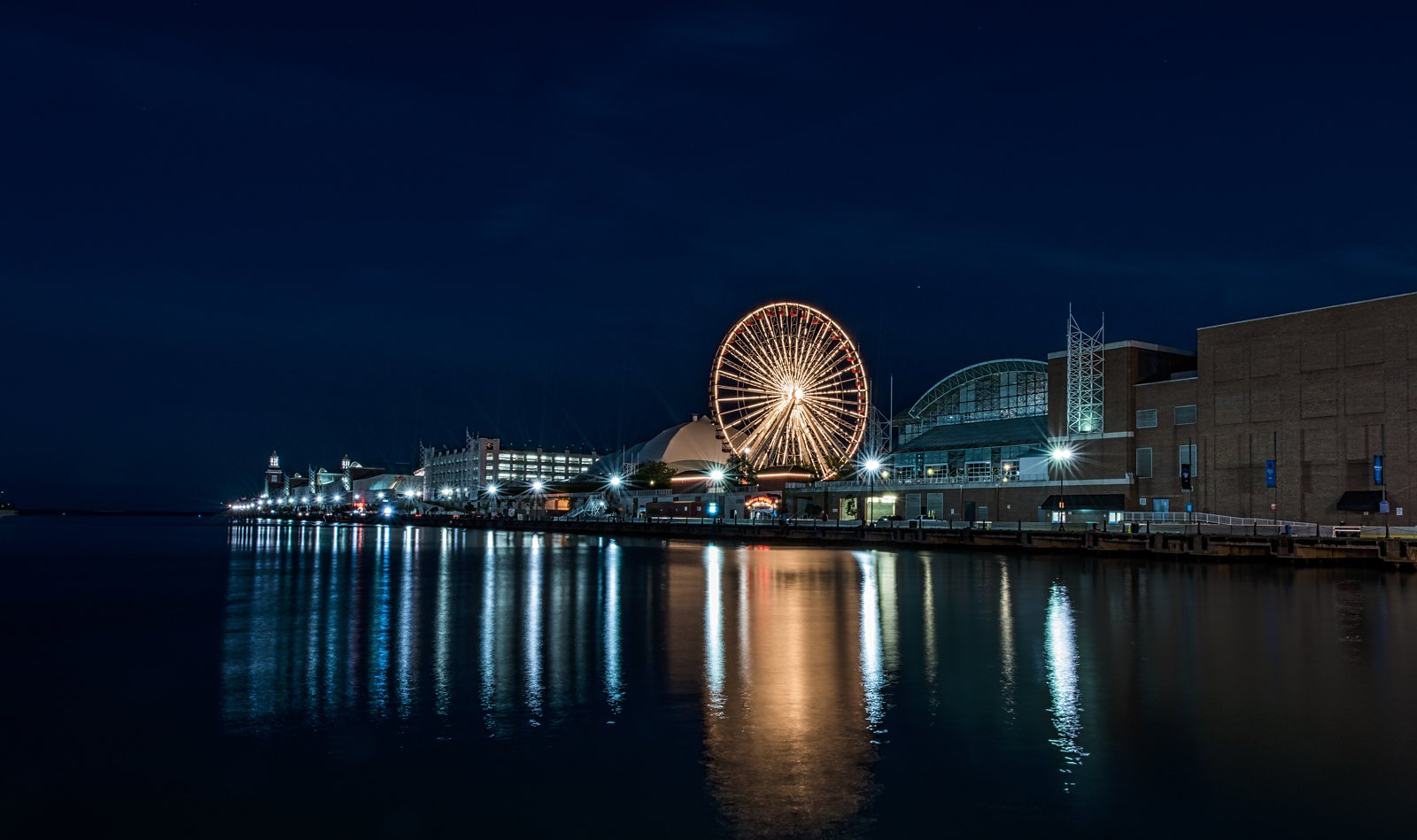 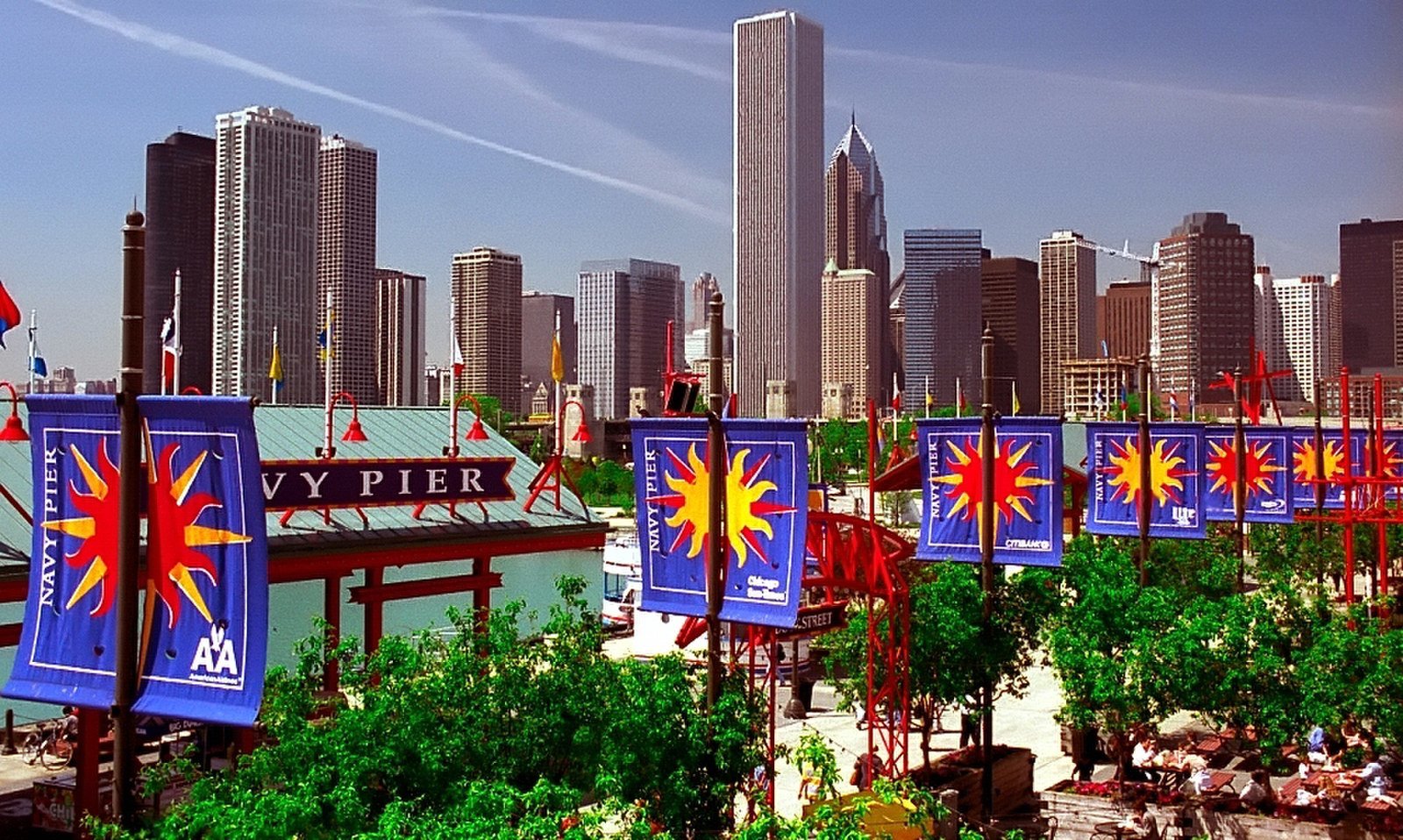