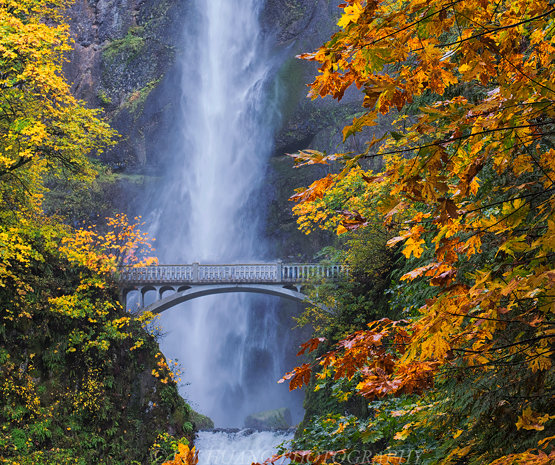 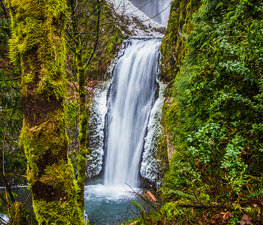 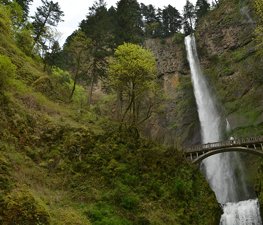 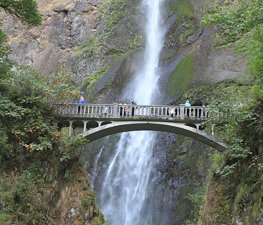 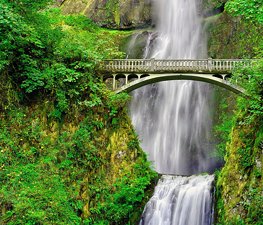 Multnomah Falls is a waterfall on the Oregon side of the Columbia River Gorge, located east of Troutdale, between Corbett and Dodson, along the Historic Columbia River Highway. The falls drops in two major steps, split into an upper falls of Шаблон:Convert and a lower falls of Шаблон:Convert, with a gradual 9 foot (3 m) drop in elevation between the two, so the total height of the waterfall is conventionally given as Шаблон:Convert. Multnomah Falls is the tallest waterfall in the state of Oregon. It is credited by a sign at the site of the falls, and by the United States Forest Service, as the second tallest year-round waterfall in the United States. However, there is some skepticism surrounding this distinction, as Multnomah Falls is listed as the 137th tallest waterfall in the United States by the World Waterfall Database (this site does not distinguish between seasonal and year-round waterfalls).

Underground springs from Larch Mountain are the year-round source of water for the waterfall, augmented by spring runoff from the mountain's snowpack and rainwater during the other seasons.

A foot trail leads to Benson Footbridge, a 45-foot (14 m)-long footbridge that allows visitors to cross 105 feet (32 m) above the lower cascade. The trail continues to a platform at the top of the upper falls where visitors get a bird's-eye view of the Columbia Gorge and also of "Little Multnomah", a small cascade slightly upstream from the "upper" falls, which is not visible from ground level. The Mark O. Hatfield Memorial Trail starts at the falls and continues through the Oregon side of the Columbia River Gorge to Starvation Creek. The footbridge is named for Simon Benson, who financed the bridge's construction in 1914 by Italian stonemasons.

Benson soon gave Portland land that included most of the falls as well as nearby Wahkeena Falls. The Oregon-Washington Railroad and Navigation Company gave Portland land at the base of Multnomah Falls contingent upon their agreement to build a lodge at the site. A few years later architect A.E. Doyle, who designed the Meier & Frank Building, was commissioned by the city to design the lodge, which was completed in 1925. The lodge is now on the National Register of Historic Places.

In contrast to other falls along the Gorge, the Multnomah area is also reachable via a stretch of I-84 east of Troutdale, Oregon. The rest area and tunnel under the road (as well as the Union Pacific Railroad tracks) allow Interstate travelers from either direction to stop and visit the falls.

On Labor Day in September 1995, a 400-ton boulder, loosened by erosion, fell Шаблон:Convert from the face of the waterfall into the upper cascade pool, above Benson Bridge. It caused a Шаблон:Convert splash of water and gravel to wash over the footbridge, causing minor injuries to twenty members of a wedding party that happened to be on the bridge posing for photos at the time.

On January 9, 2014, a falling rock damaged a portion of the bridge walkway and concrete railing, leading the Forest Service to close the bridge until repairs are made.

Rory Parness
Avoid the crazy traffic on east 30 by parking at the lower lot at Wahkeena Falls. Hike the ,2 miles to see Wahkeena and then enjoy the easy .5 mile hike to Multnomah

Kae ? ? ? ??? ?? ? ?
Multnomah Falls is The falls drops in two major steps between the two so the total height of the waterfall is conventionally given as 189 m Multnomah is the tallest waterfall in the State of Oregon

Benjamin Chait
Always worth a quick hike for some misty views. Beware, lots of people and you’ll likely get wet standing near the base of the falls. But great photos and spending time outdoors makes it worthwhile!

Nathaniel Jackson
Come early to avoid the crowd. Seeing the falls make you appreciate the awesomeness of Mother Nature!

Stefani K
Such a great view from the bridge, just a short hike from the bottom viewing area, but many other trails to take up to the top of you are feeling adventurous. Dog-friendly! But gets crowded!
Load more comments
foursquare.com
9.0/10
Jenia Varavva, Victor and 250,999 more people have been here
I've been here
Add to wishlist

Horsetail Falls (or Horse Tail Falls) is a waterfall along the

Metlako Falls, which takes its name from the Indian goddess of salmon, 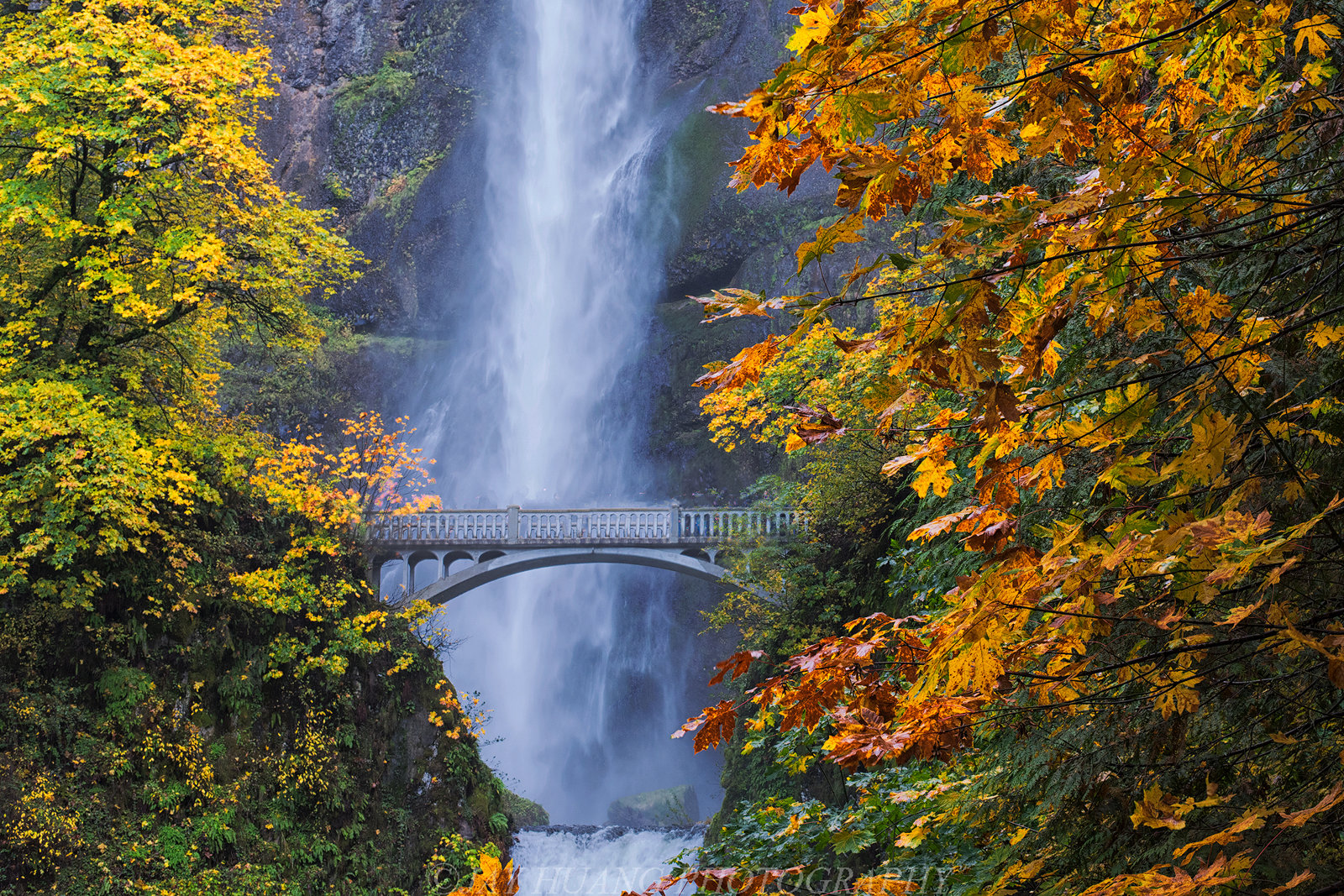 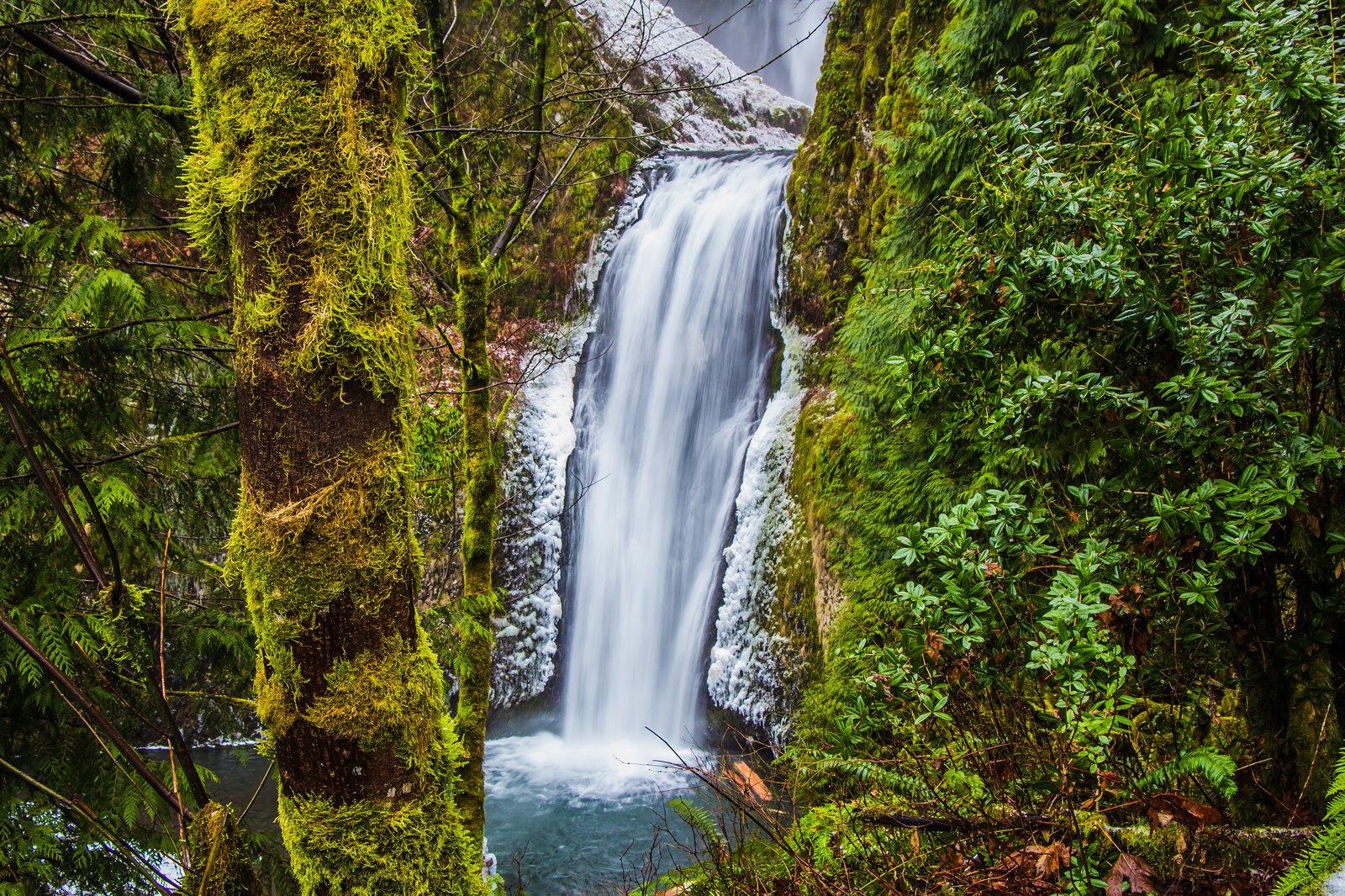 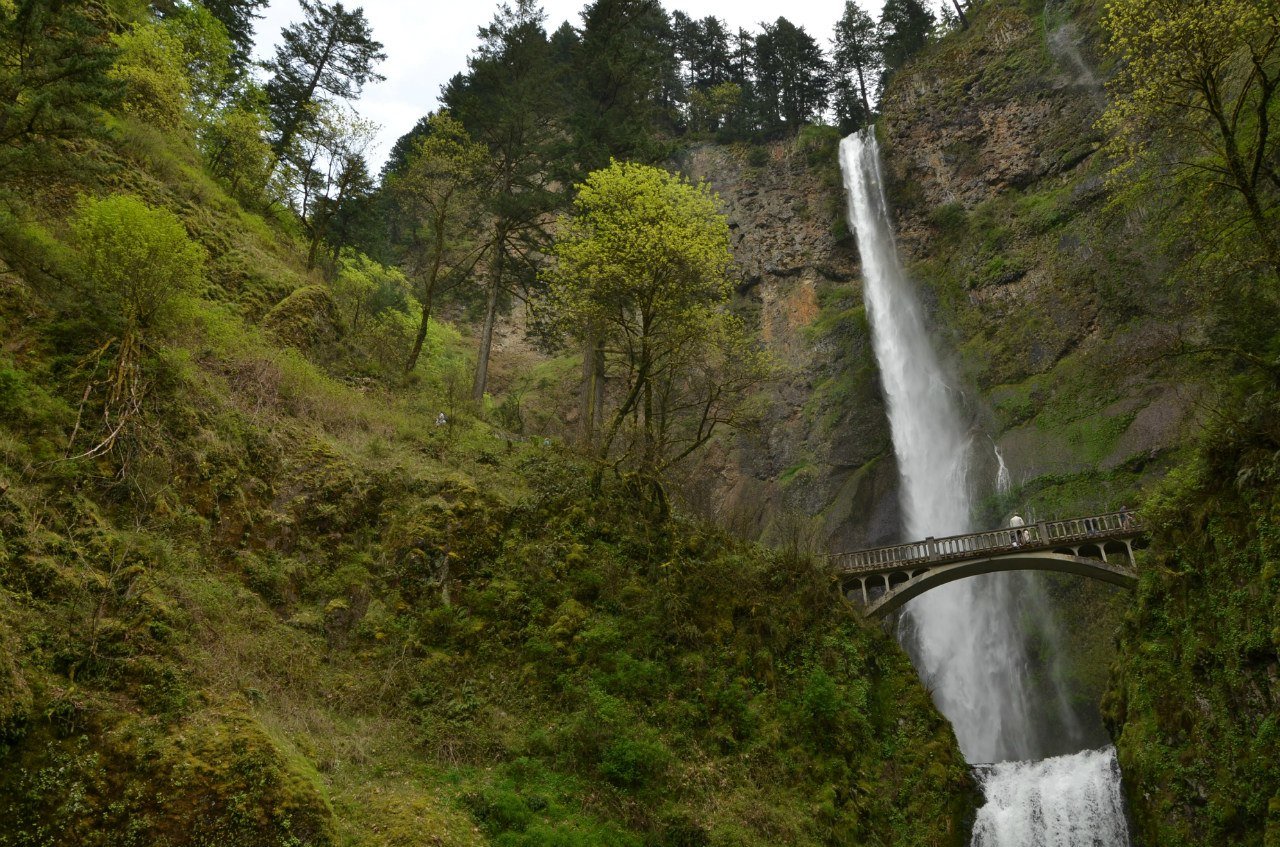 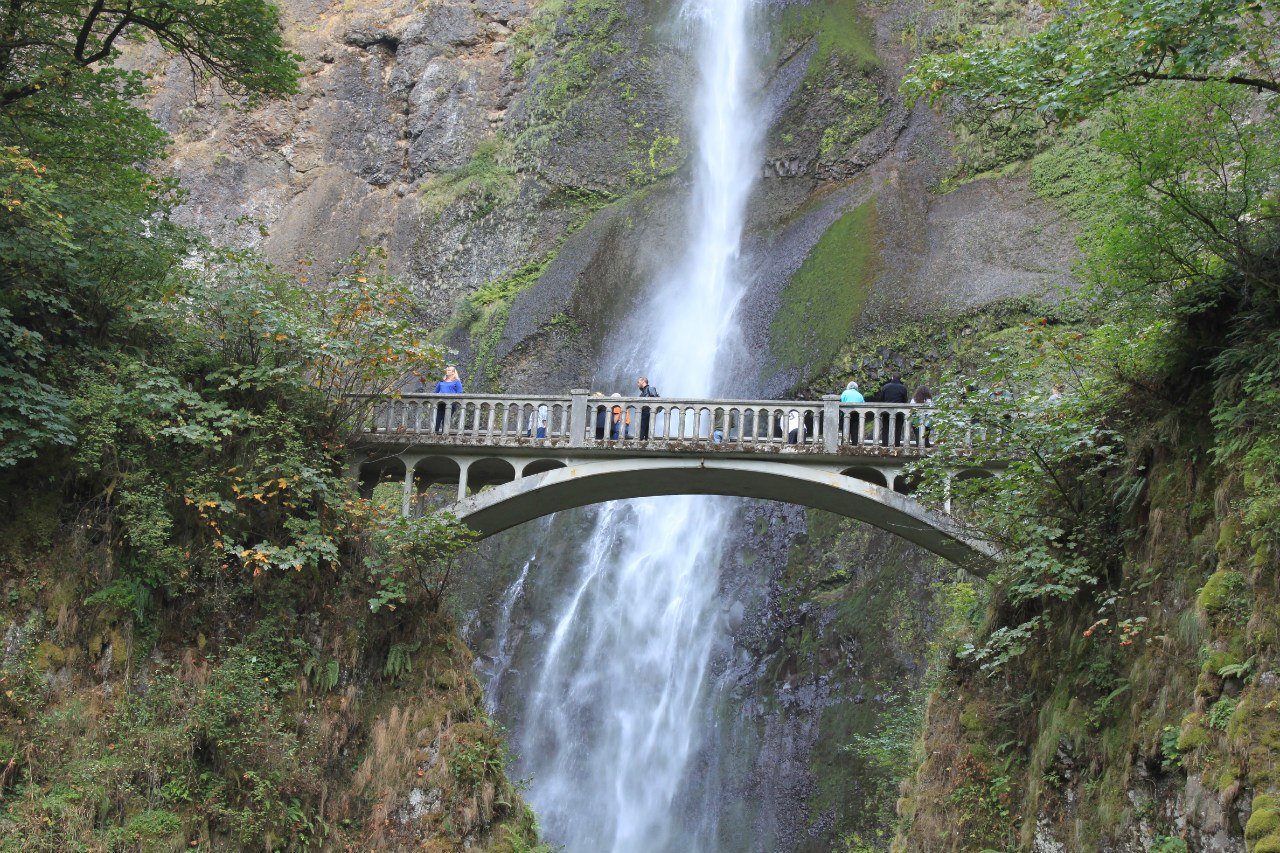 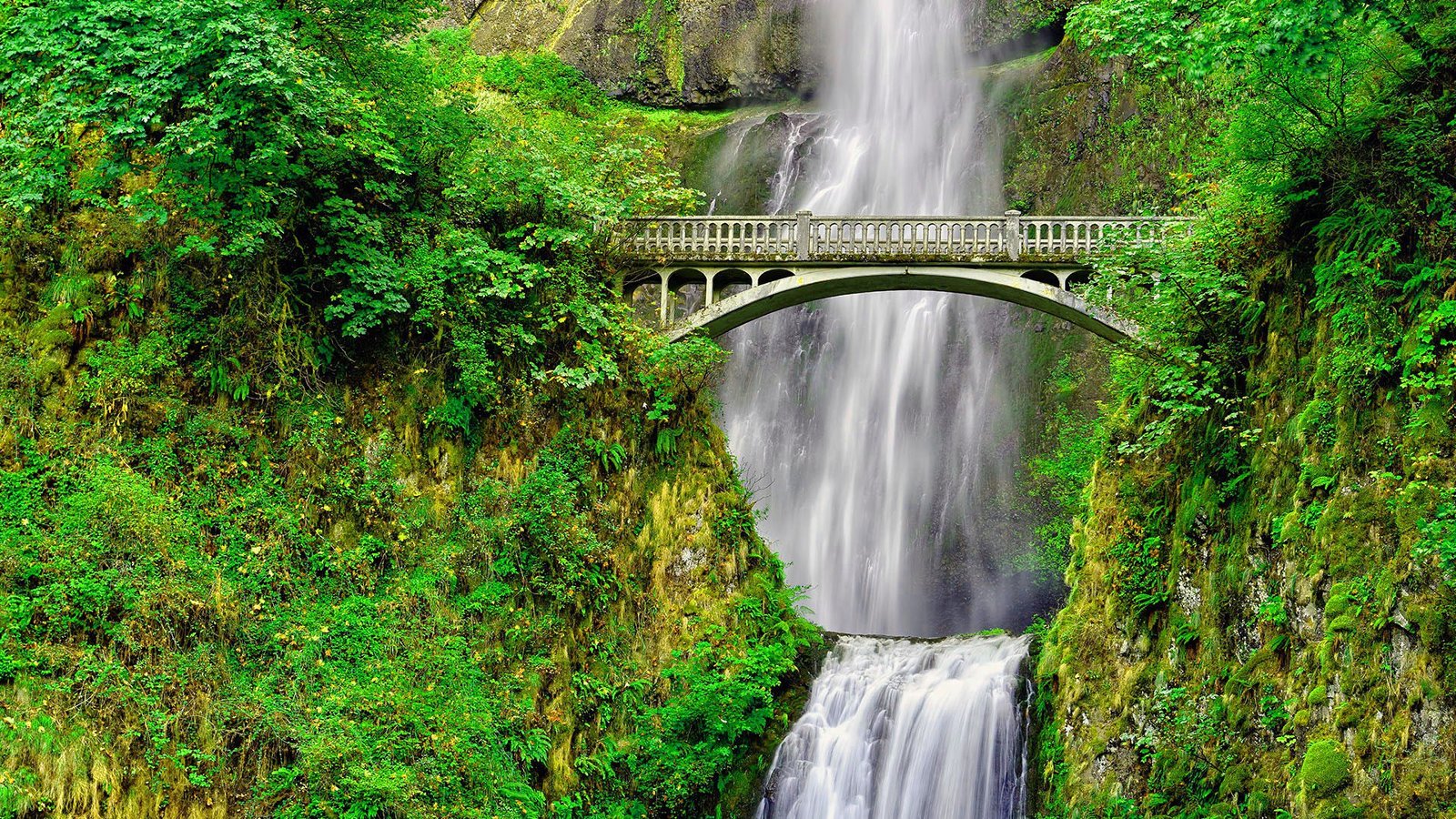 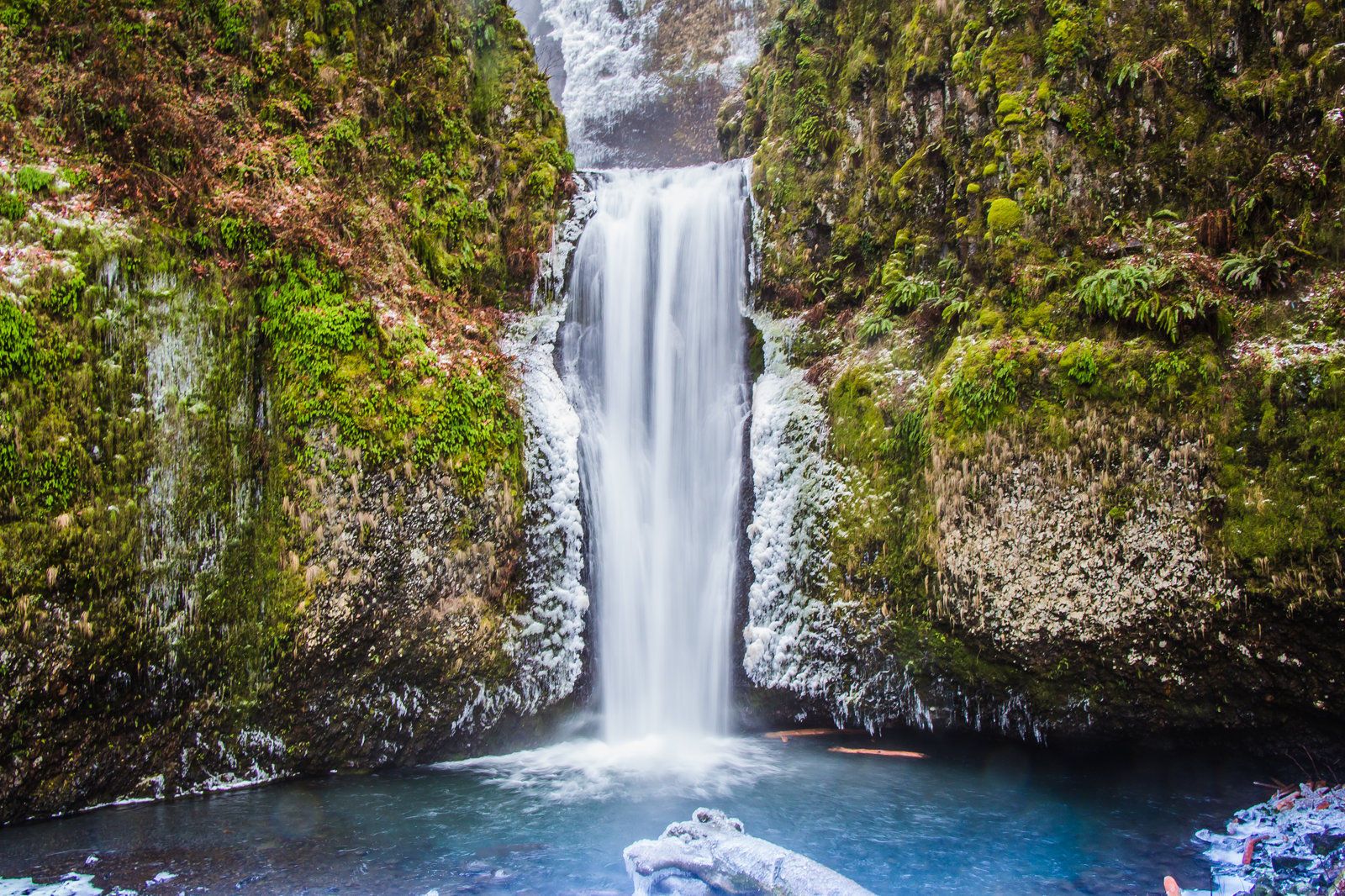 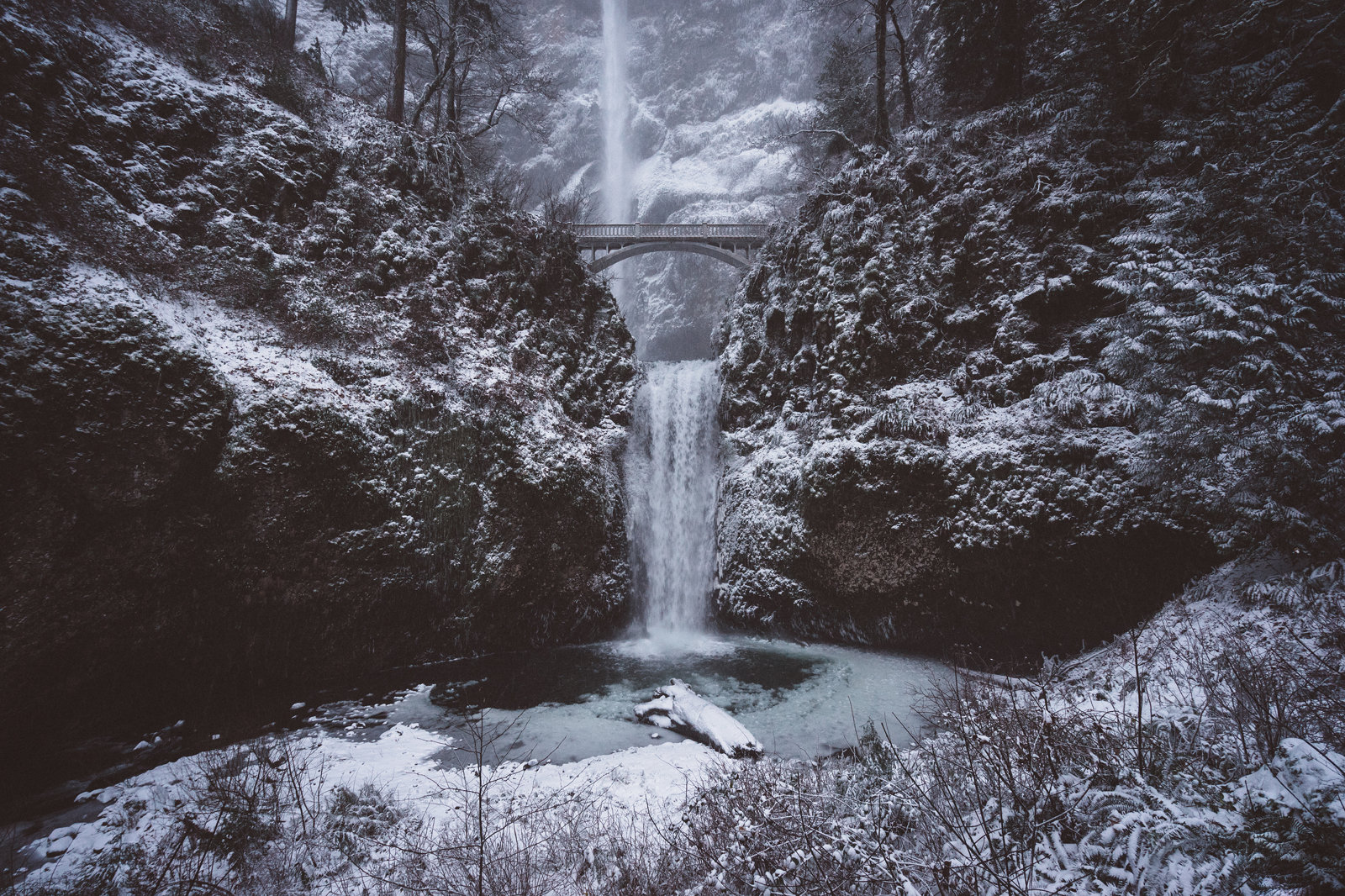 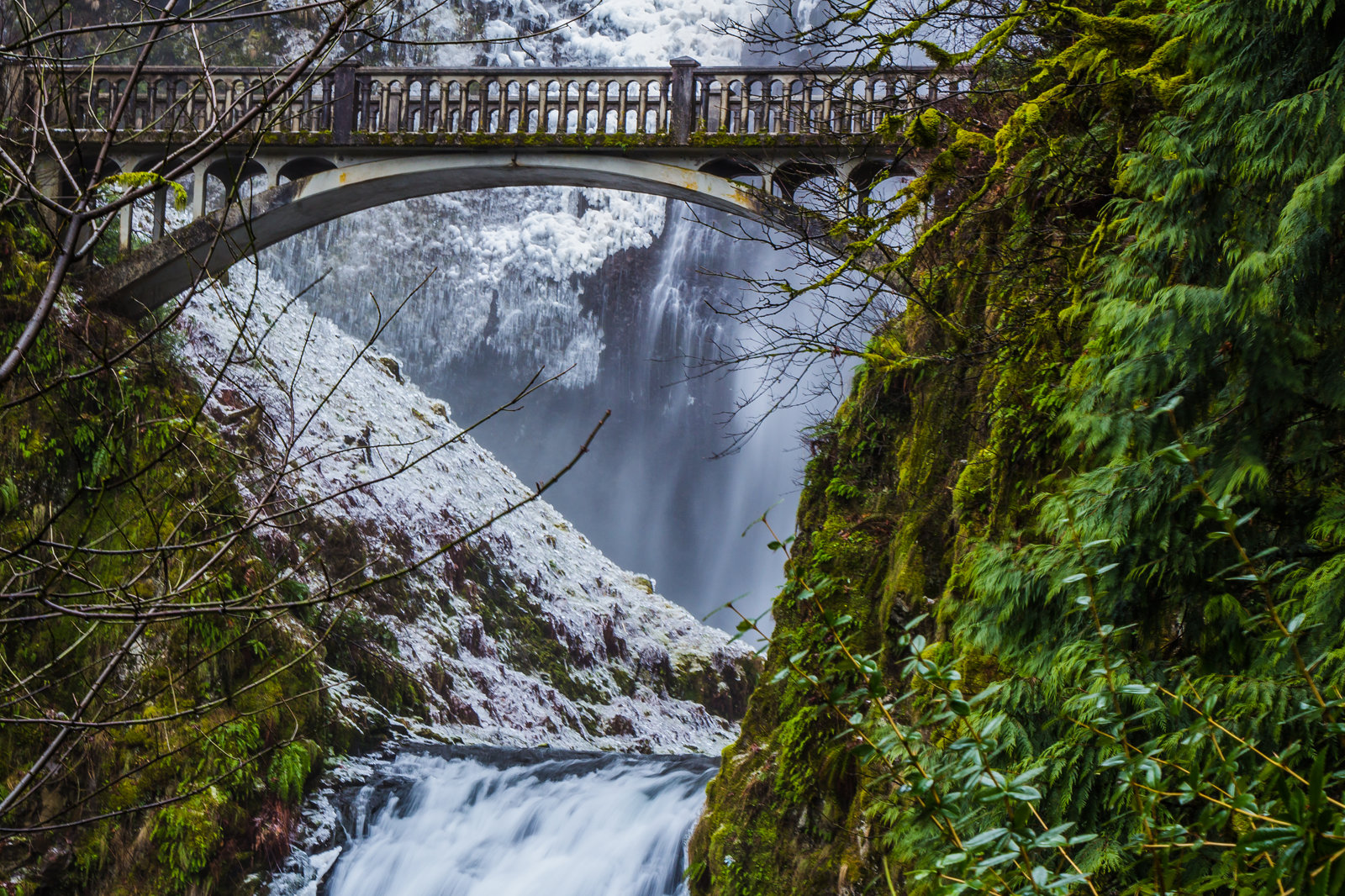 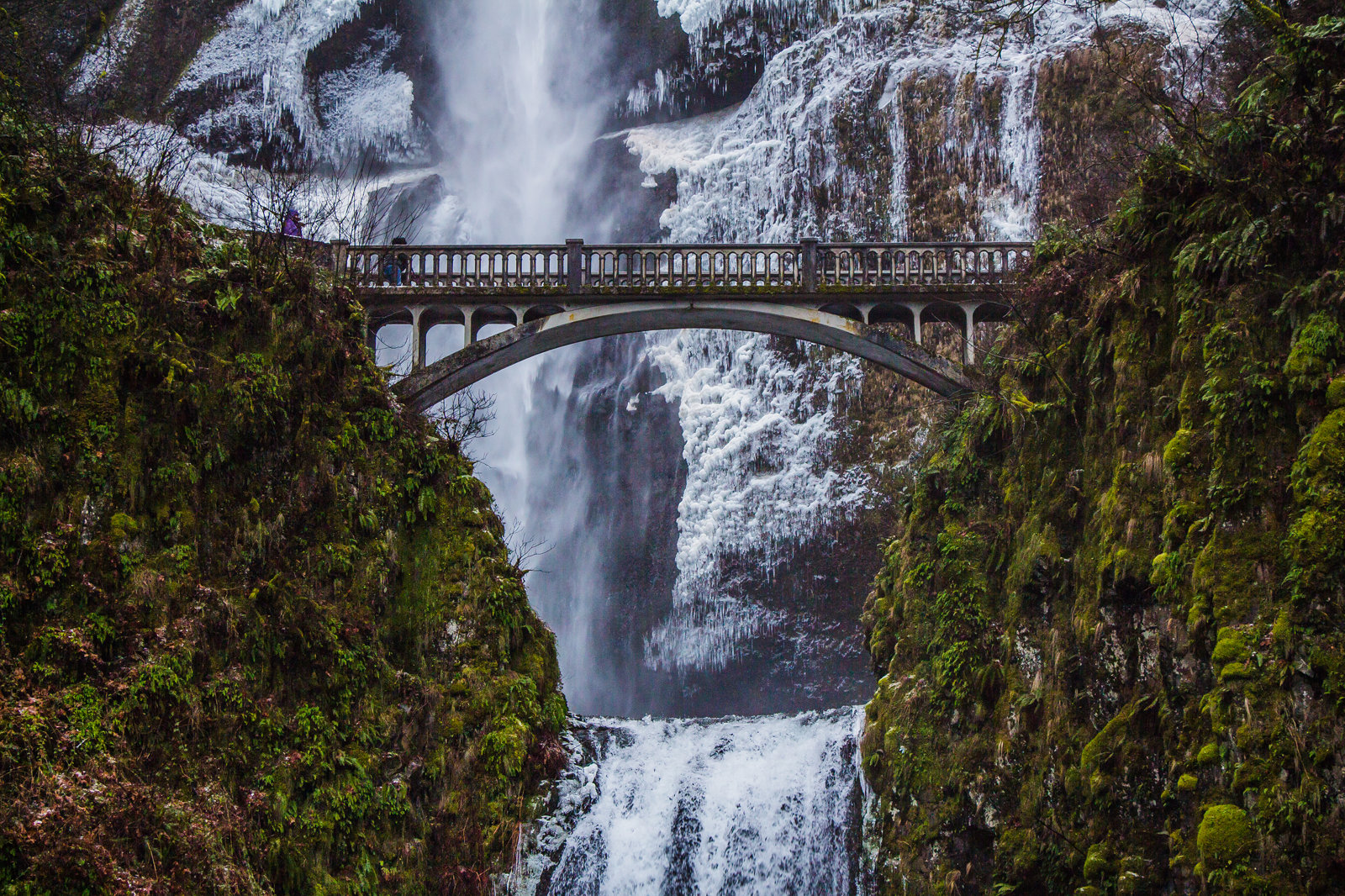 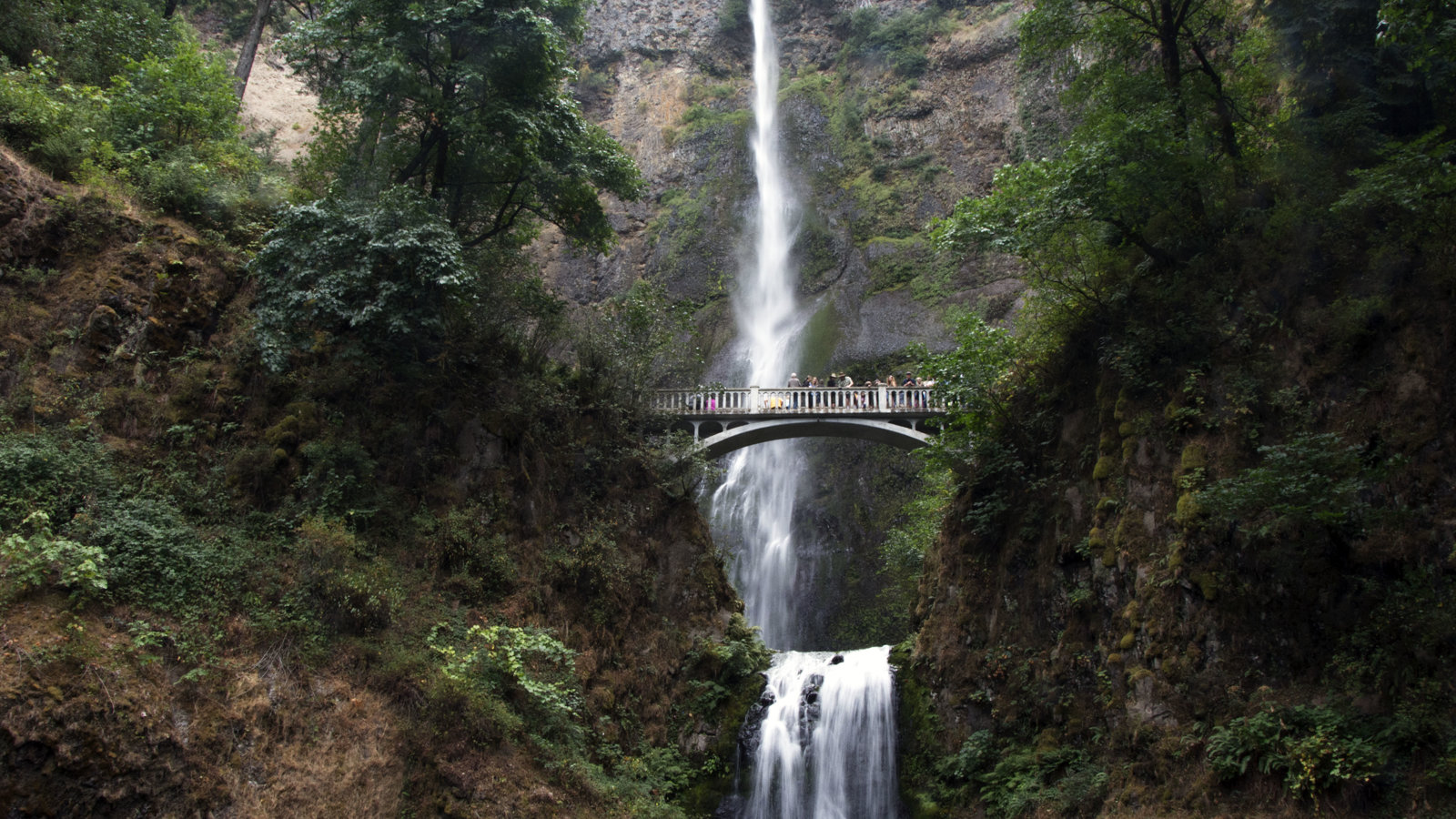 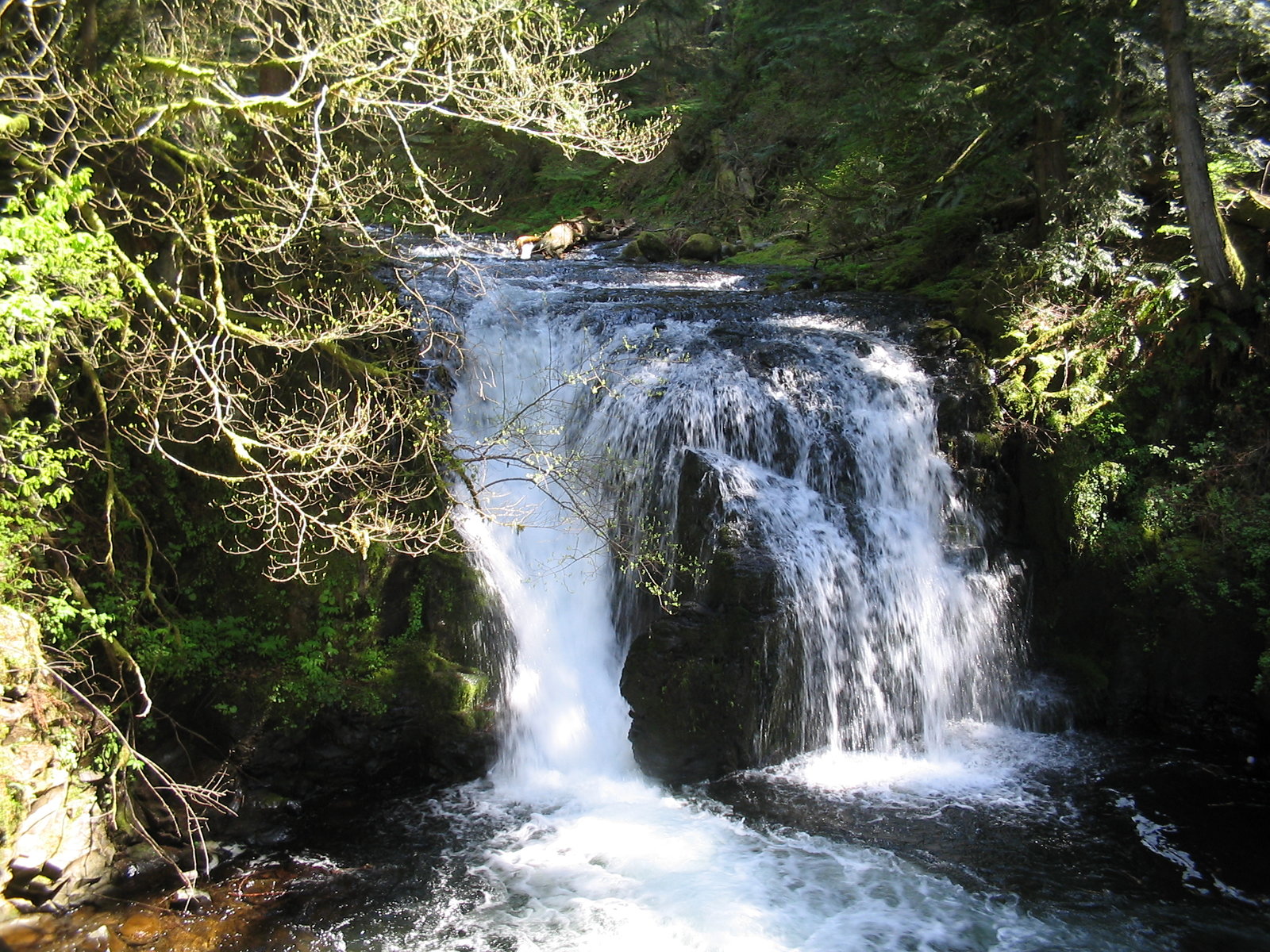 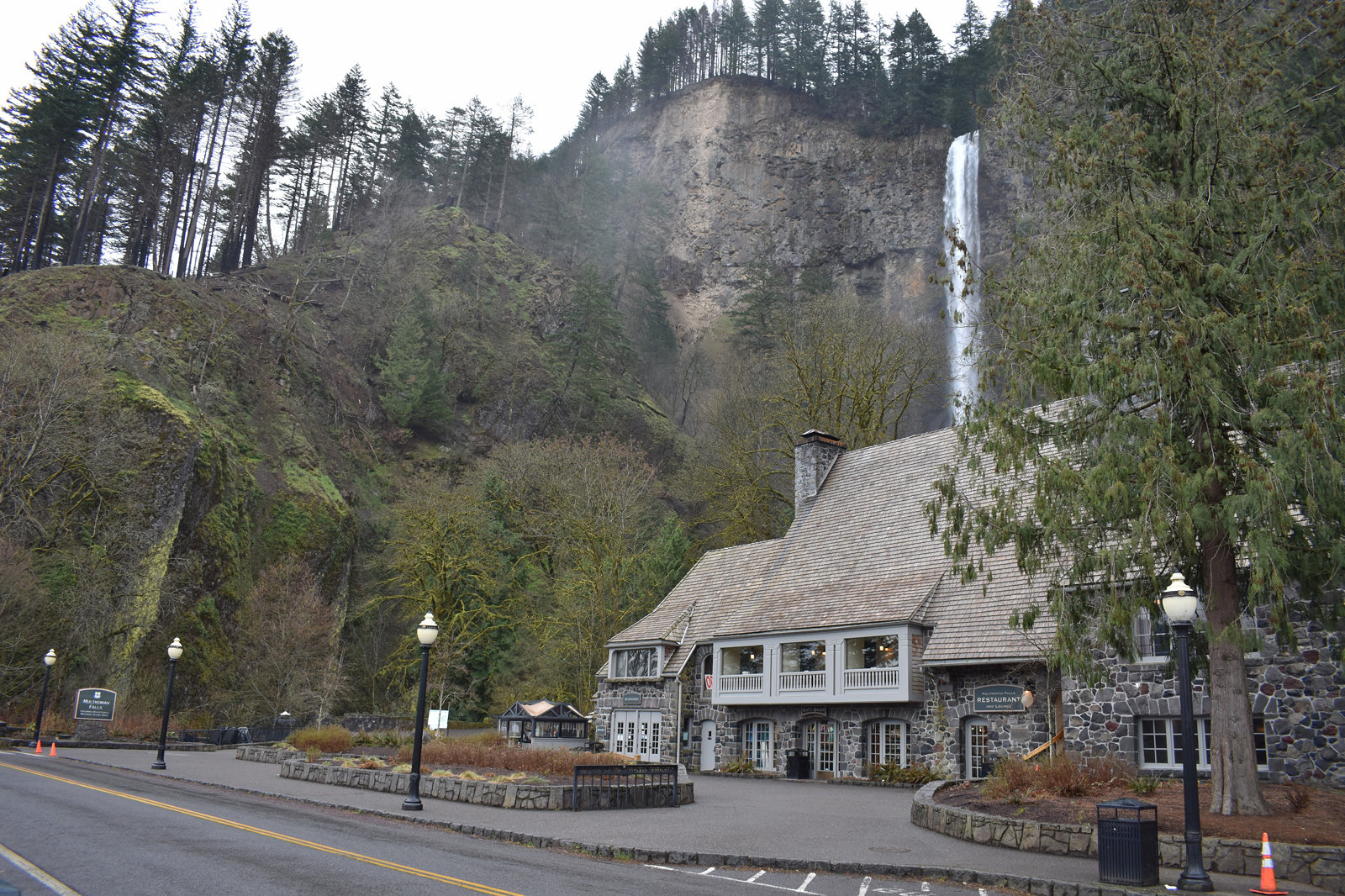 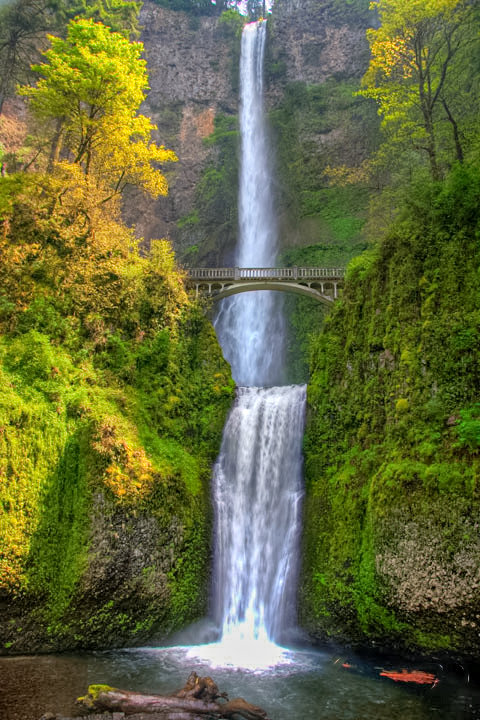 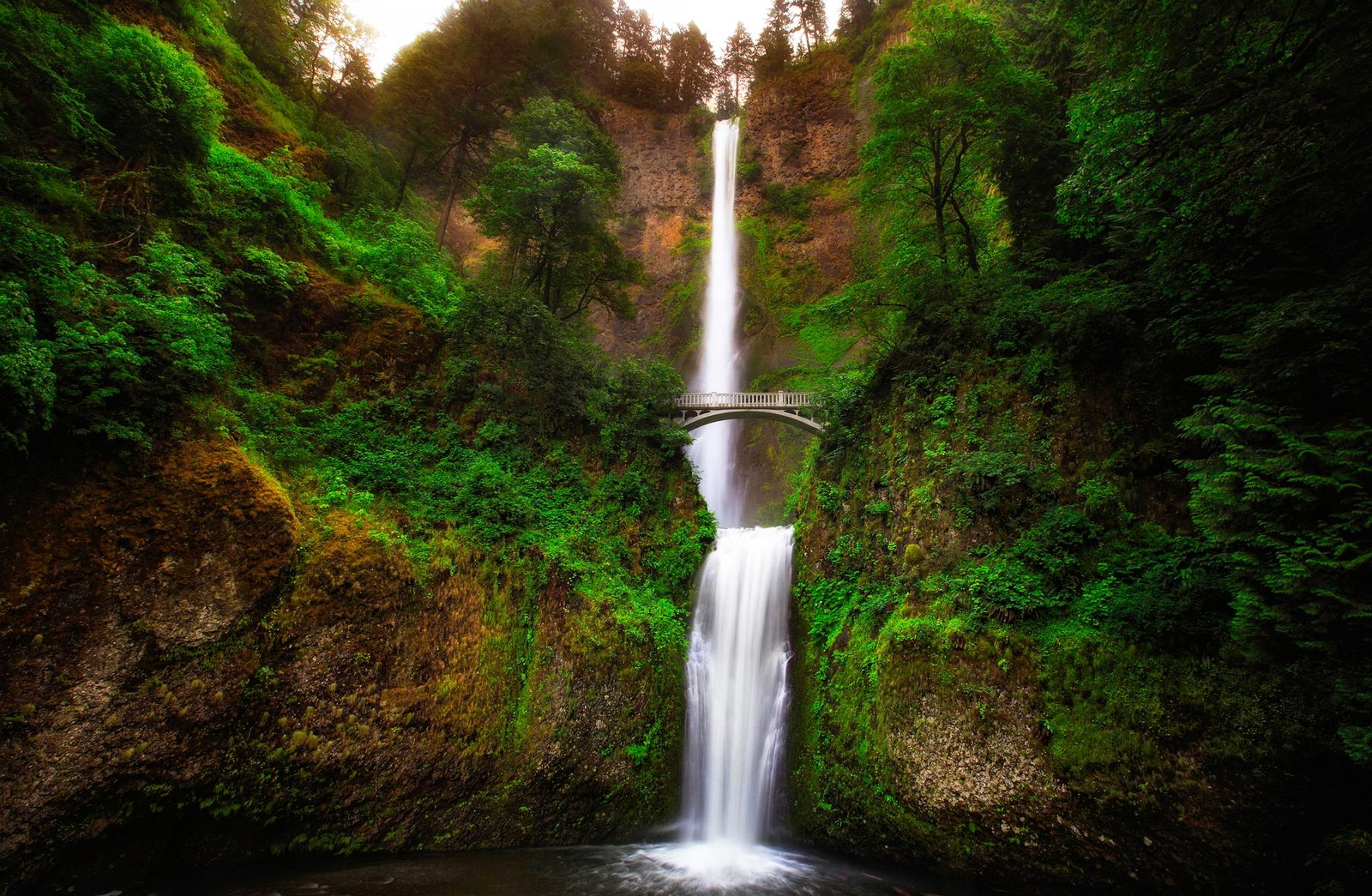 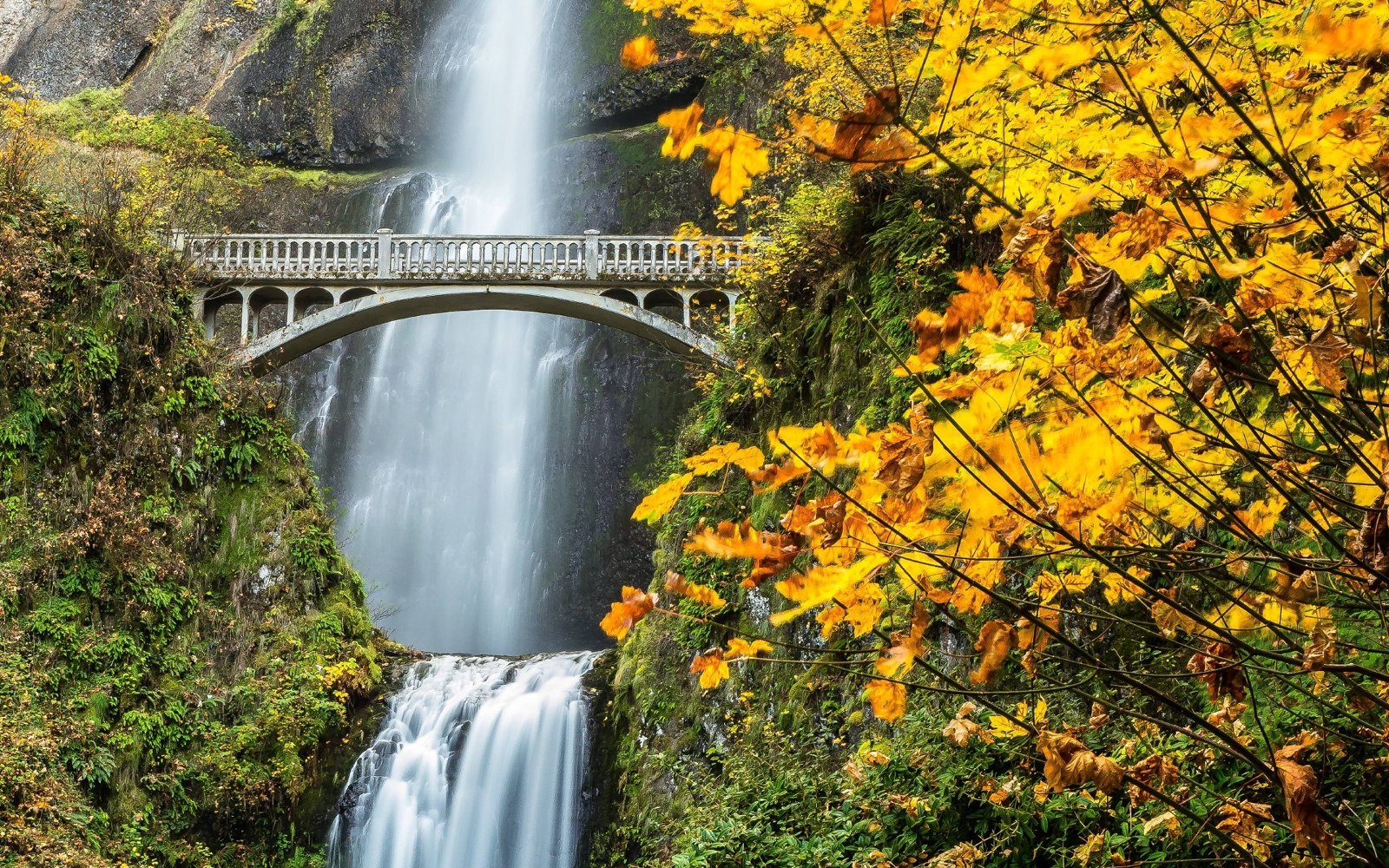 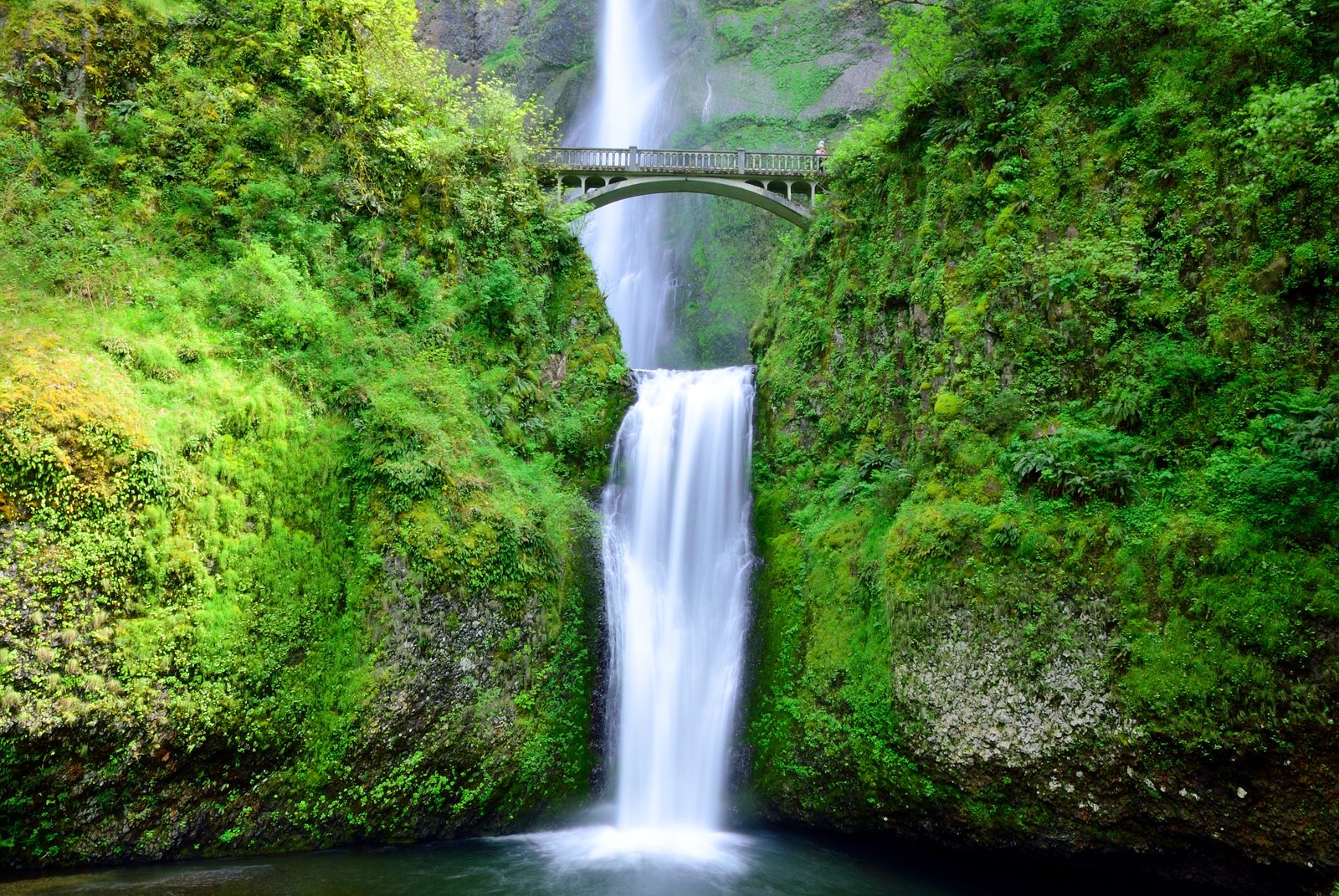 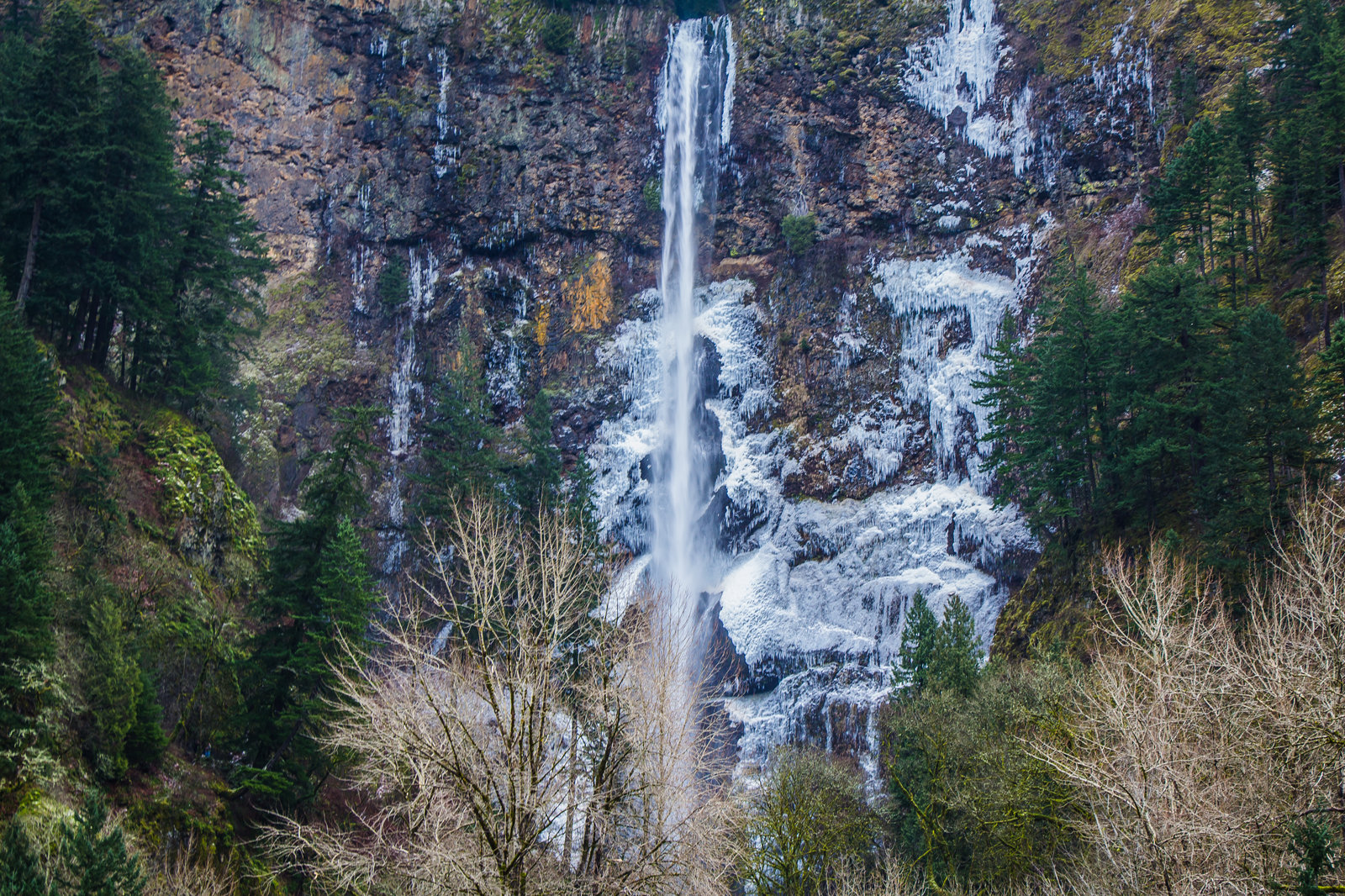 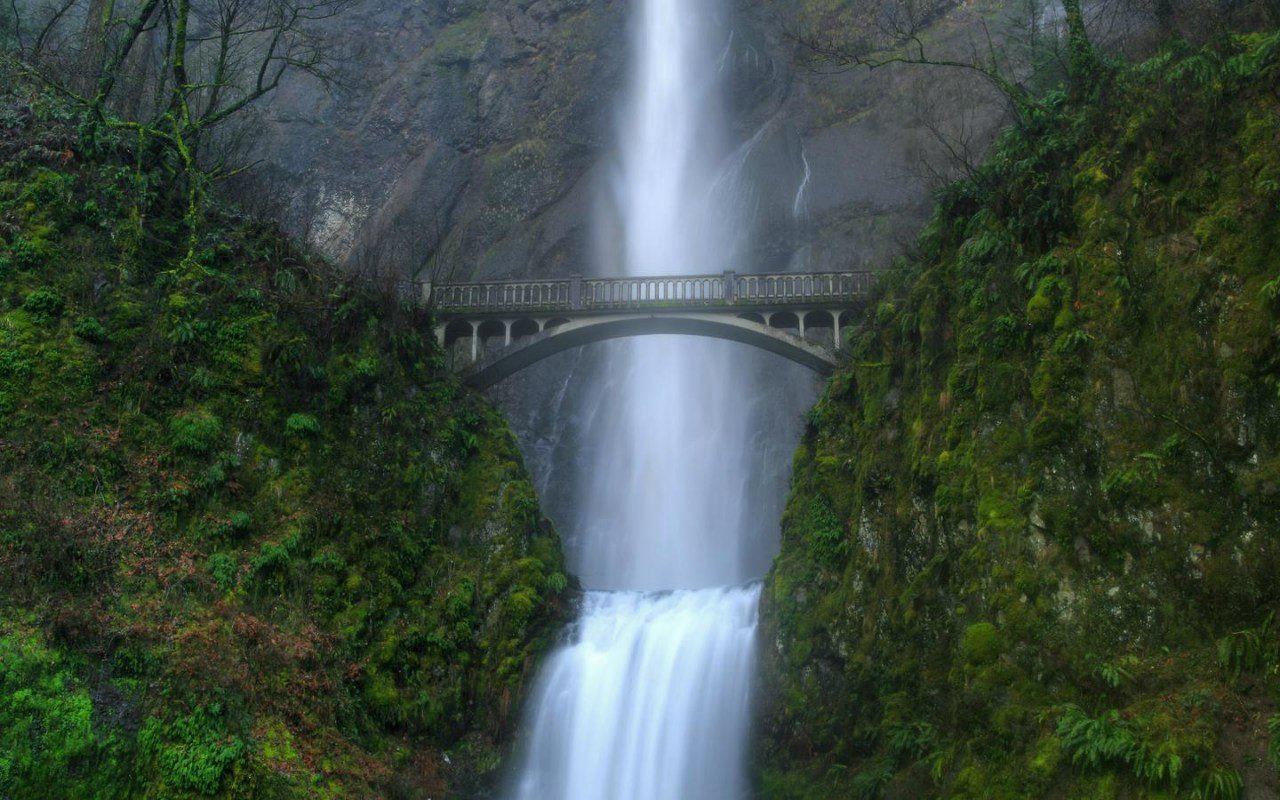 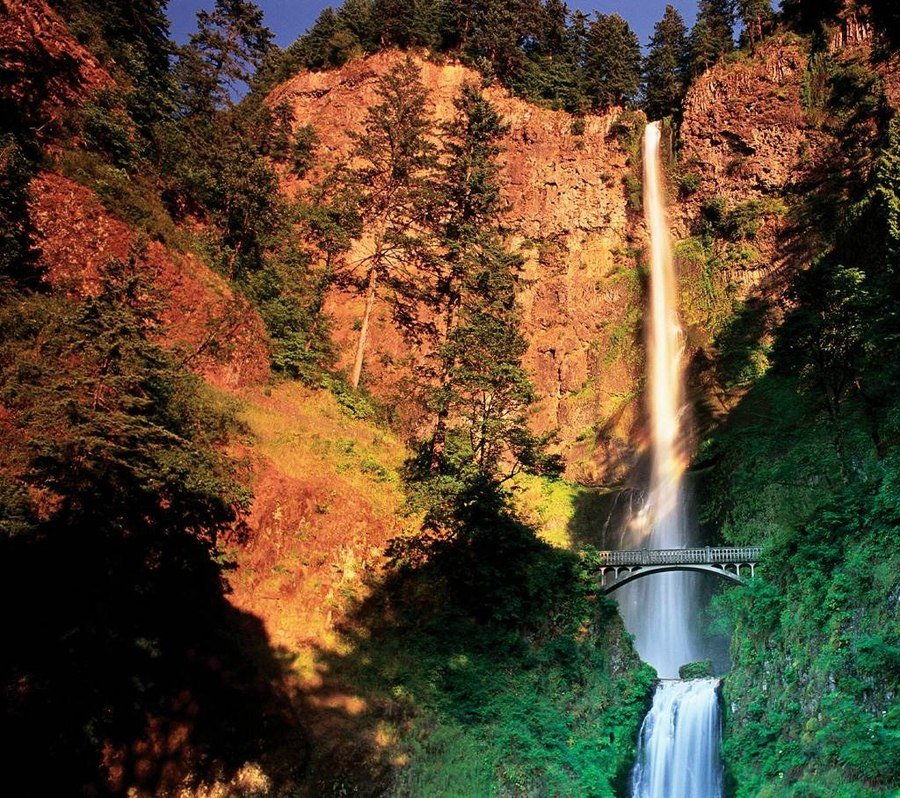 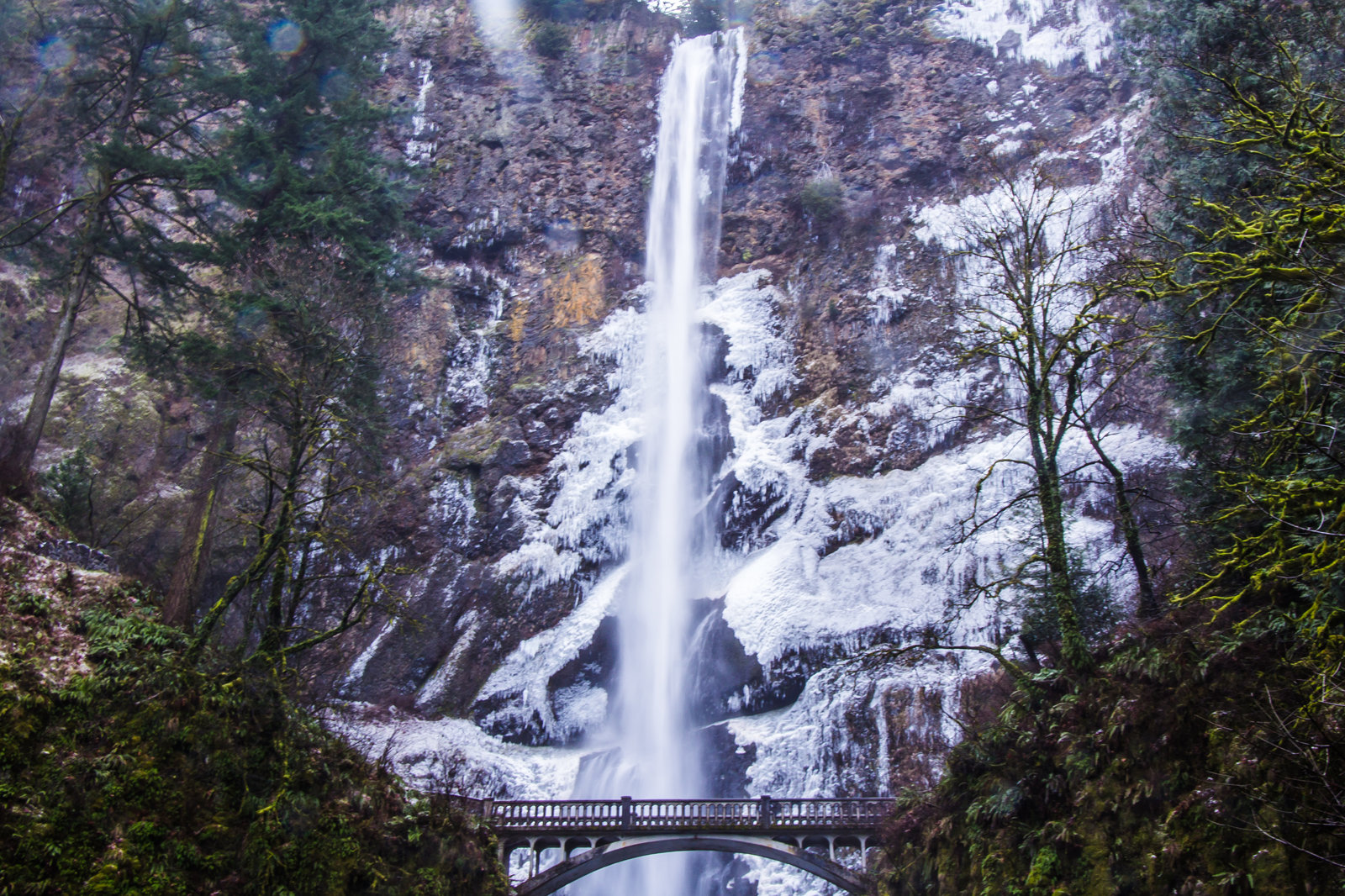 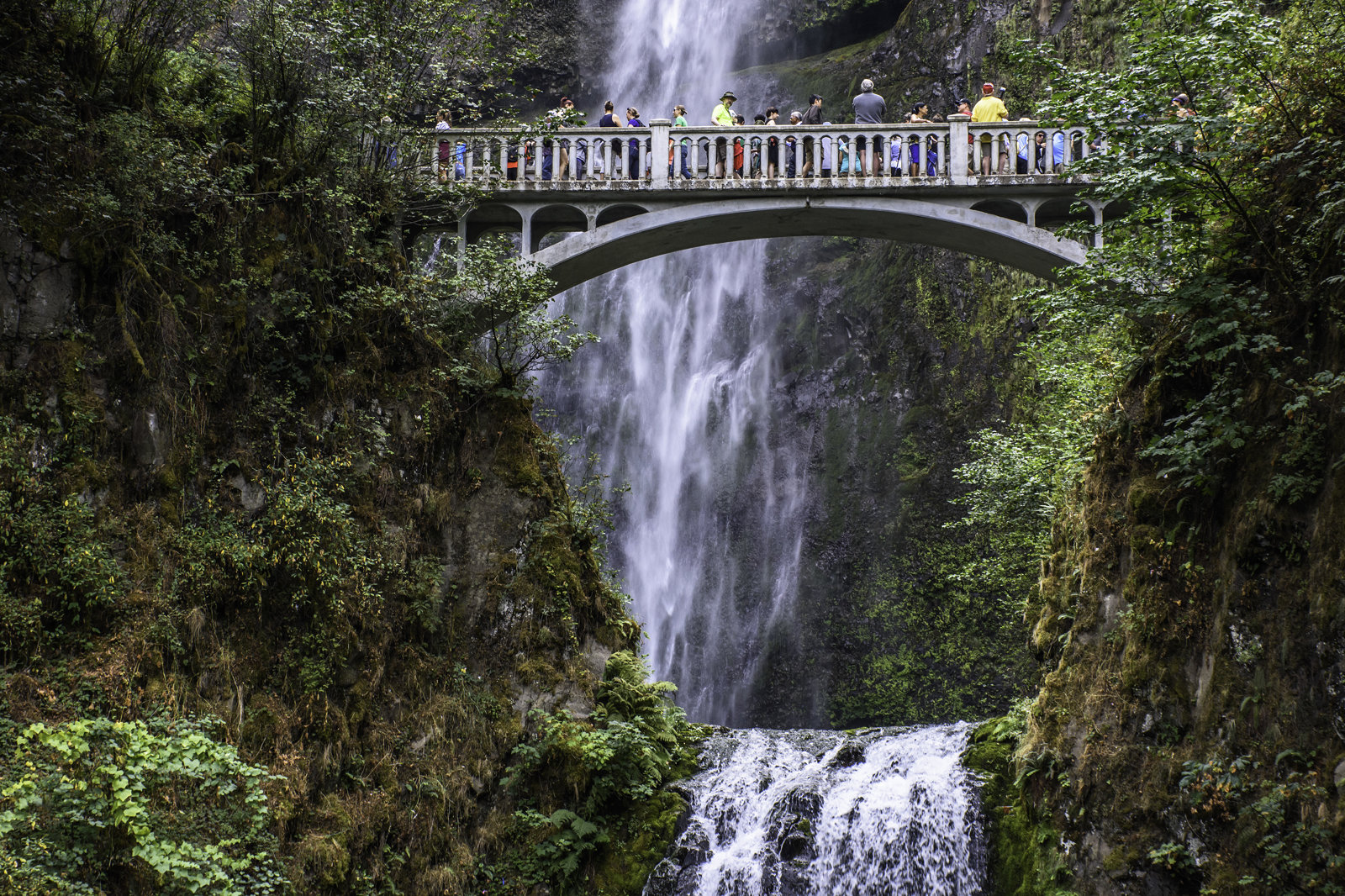