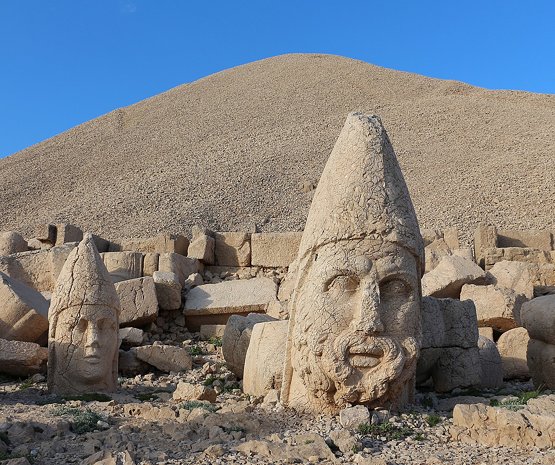 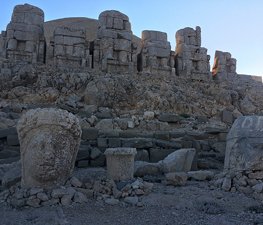 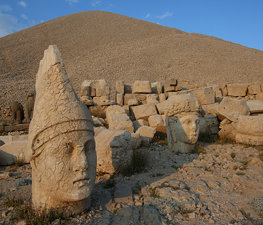 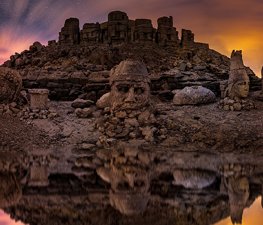 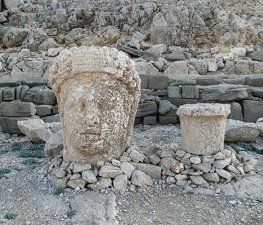 Nemrut or Nemrud (Turkish: 'Nemrut Dağı') is a 2,134 m (7,001 ft) high mountain in southeastern Turkey, notable for the summit where a number of large statues is erected around what is assumed to be a royal tomb from the first century BCE.

The mountain lies 40 km (25 mi) north of Kahta, near Adıyaman. In 62 BC, King Antiochus I Theos of Commagene built on the mountain top a tomb-sanctuary flanked by huge statues (8–9 m/26–30 ft high) of himself, two lions, two eagles and various Greek, and Armenian gods, such as Hercules-Vahagn, Zeus-Aramazd or Oromasdes (associated with the Iranic god Ahura Mazda), Tyche, and Apollo-Mithras. These statues were once seated, with names of each god inscribed on them. The heads of the statues have at some stage been removed from their bodies, and they are now scattered throughout the site.

The pattern of damage to the heads (notably to noses) suggests that they were deliberately damaged because of belief in iconoclasm. The statues have not been restored to their original positions. The site also preserves stone slabs with bas-relief figures that are thought to have formed a large frieze. These slabs display the ancestors of Antiochus, who included both Macedonians and Persians.

The same statues and ancestors found throughout the site can also be found on the tumulus at the site, which is 49 m (161 ft) tall and 152 m (499 ft) in diameter. The statues appear to have Greek-style facial features, but Persian clothing and hairstyling.

The western terrace contains a large slab with an lion, showing the arrangement of stars and the planets Jupiter, Mercury and Mars on 7 July 62 BC. This may be an indication of when construction began on this monument. The eastern portion is well preserved, being composed of several layers of rock, and a path following the base of the mountain is evidence of a walled passageway linking the eastern and western terraces. Possible uses for this site is thought to have included religious ceremonies, due to the astronomical and religious nature of the monument.

The arrangement of such statues is known by the term hierothesion. Similar arrangements have been found at Arsameia on Nymphaios at the hierothesion of the father of Antiochus, Mithridates I Callinicus.

When the Seleucid Empire was defeated by the Romans in 189 BCE at the Battle of Magnesia it began to fall apart and new kingdoms were established on its territory by local authorities. Commagene being one of the Seleucid successor states occupied a land in between the Taurus mountains and the Euphrates. The state of Commagene had a wide range of cultures which left its leader from 62 BCE - 38 BCE Antiochus I to carry on a peculiar dynastic religious program, in which it included not only Greek and Persian deities but Antiochus and his family as well. This religious program was very possibly an attempt of Antiochus to unify his multiethnic kingdom and secure his dynasty's authority.

Antiochus supported the cult as a propagator of happiness and salvation. Many of the monuments on Mount Nemrud are ruins of the imperial cult of Commagene. The most important area to the cult was the tomb of Antiochus I, in which was decorated with colossal statues made of limestone. Although the Imperial cult did not last long after Antiochus, several of his successors had their own tombs built on Mount Nemrud. For about a half a year Mount Nemrud lays covered in snow which in effect has increased its weathering in which has in part caused its statues to fall in ruin.

The site was excavated in 1881 by Charles Sester, a German engineer assessing transport routes for the Ottomans. Subsequent excavations have failed to reveal the tomb of Antiochus. This is nevertheless still believed to be the site of his burial. The statues, all of them "beheaded", have not been restored to their original condition.

In 1987, Mount Nemrut was made a World heritage site by UNESCO. Tourists typically visit Nemrut during June through August. The nearby town of Adıyaman is a popular place for car and bus trips to the site, and one can also travel from there by helicopter. There are also overnight tours running out of Malatya.

Mehdi Jahani
Very nice and breathtaking place, but its good to come here for sunset or sunrise, go with comfortable shoes, you have a long walk to top

Eric V
Beautiful mountain, cool ruins. Just make sure the snow has melted enough that you can go to all of it

nurulfathymaysmael
Great experience for me to claim up while snowing at the top of the mountains . Struggles but worth! #mountNemrut #NFtakesNemrut #turkey19 ????

Such a Someone
You must be see this place, before dead. 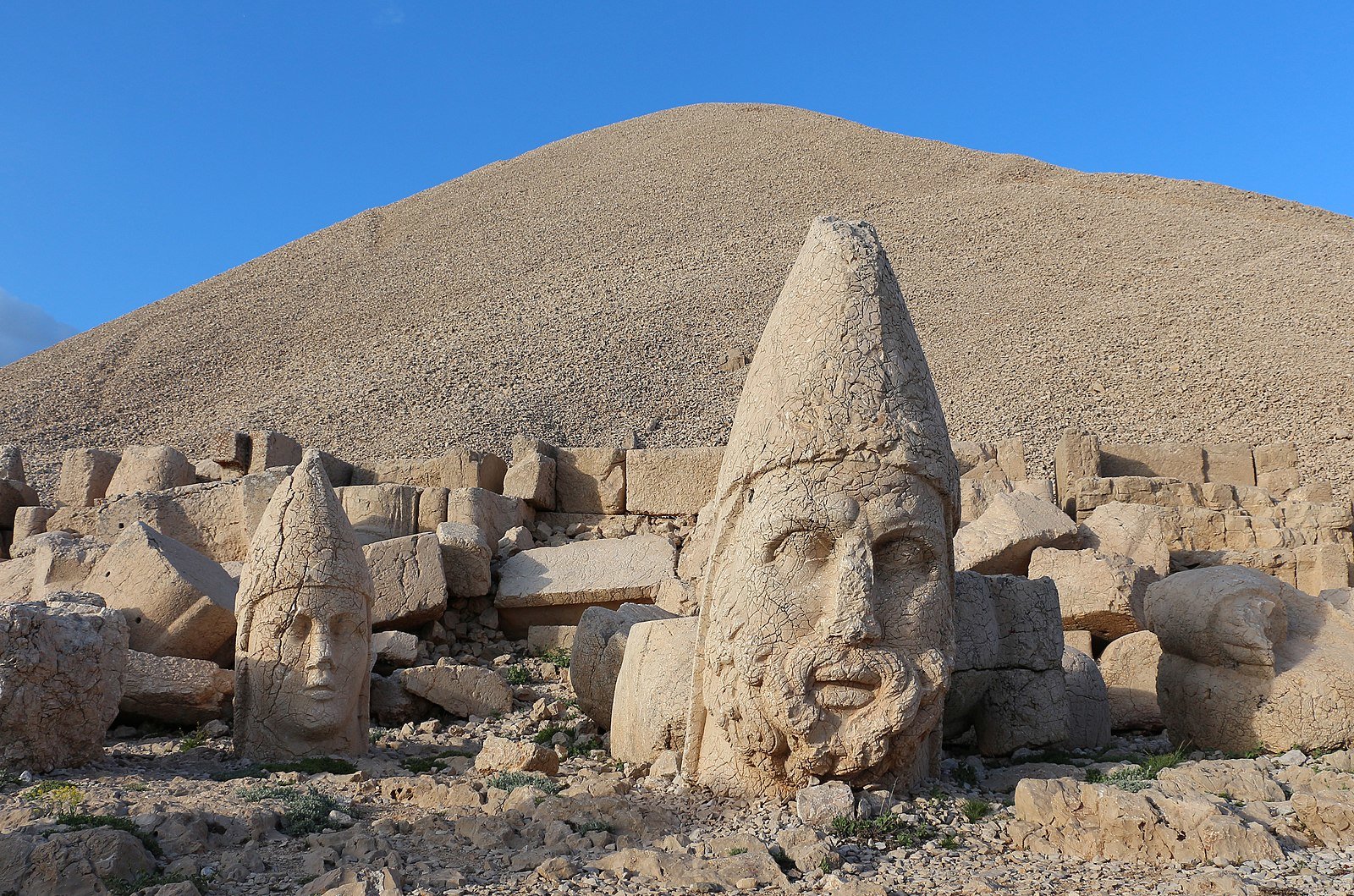 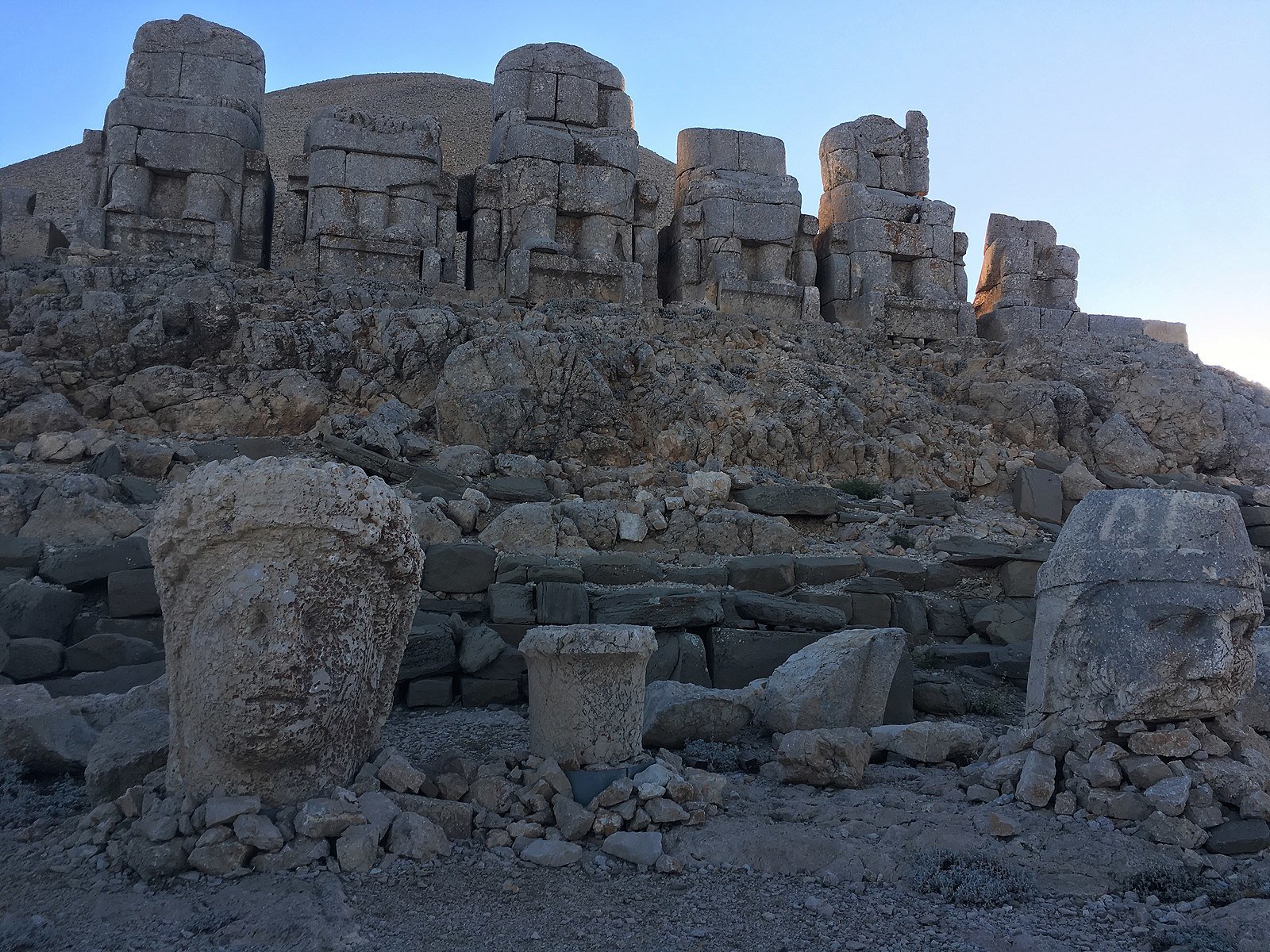 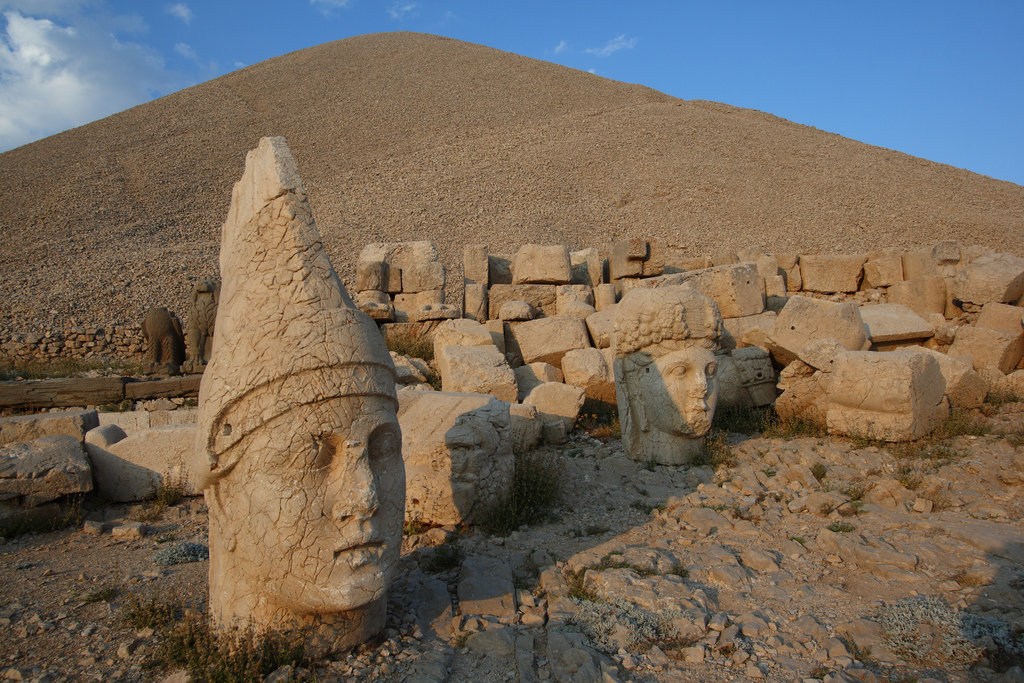 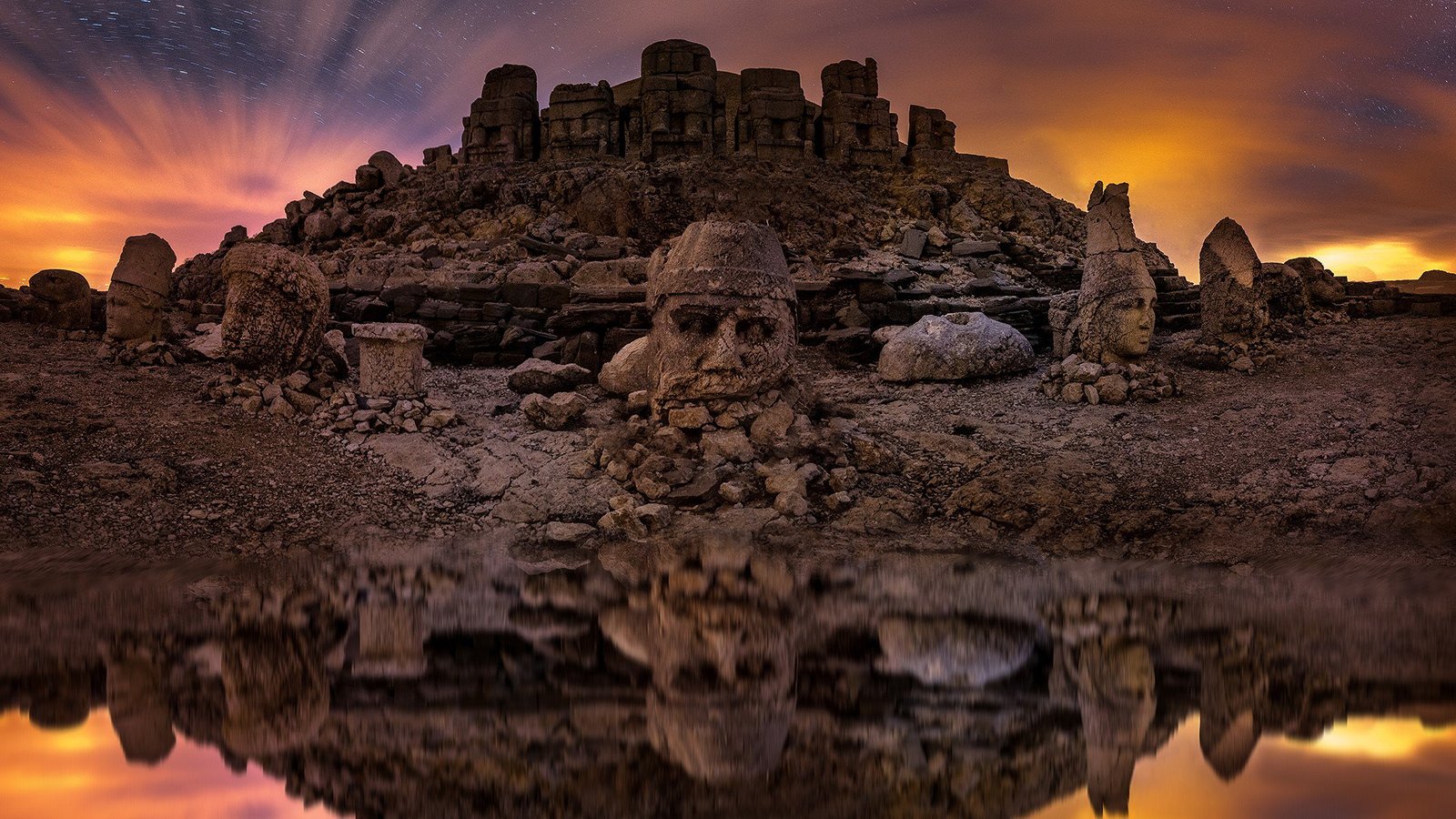 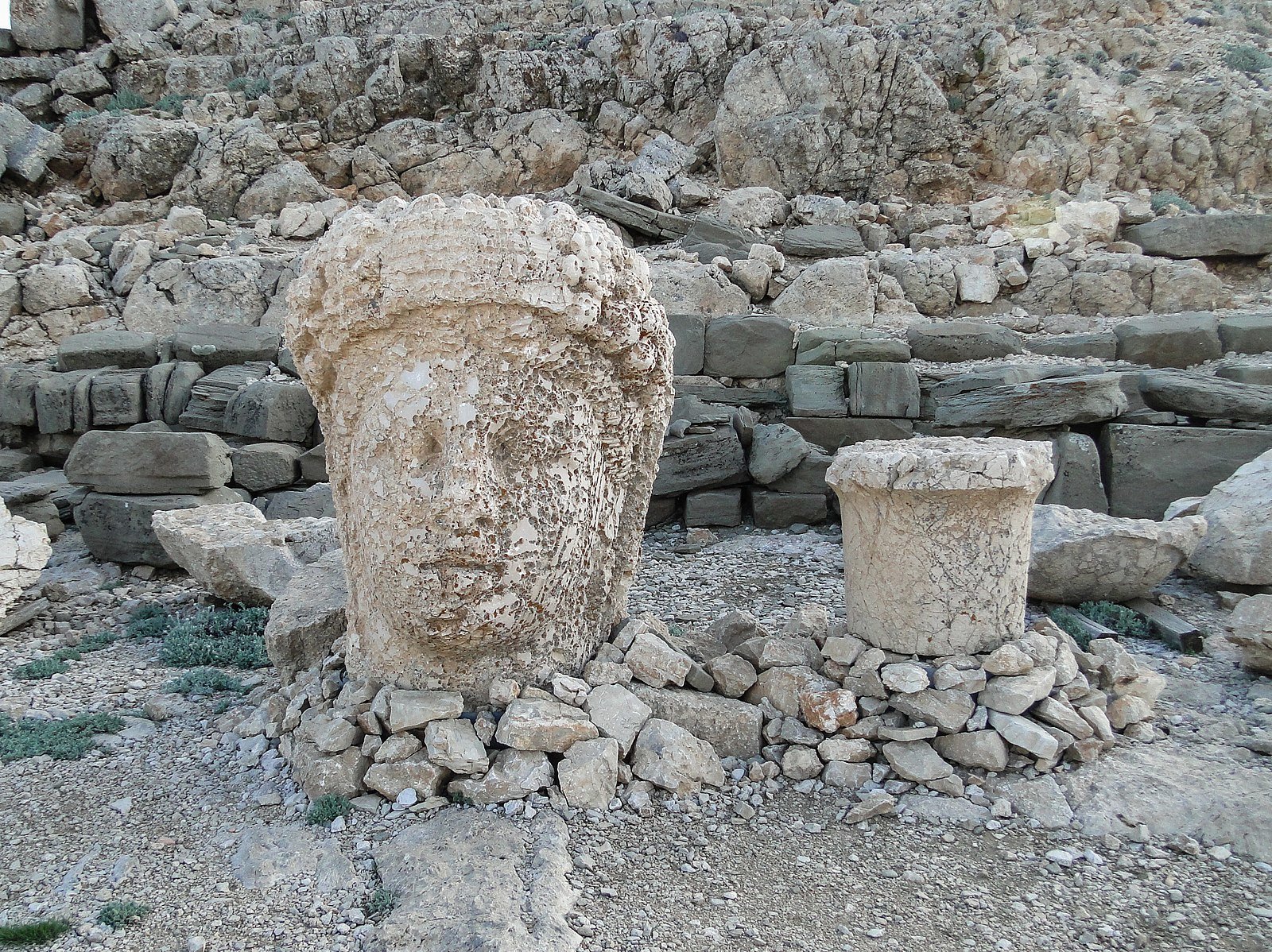 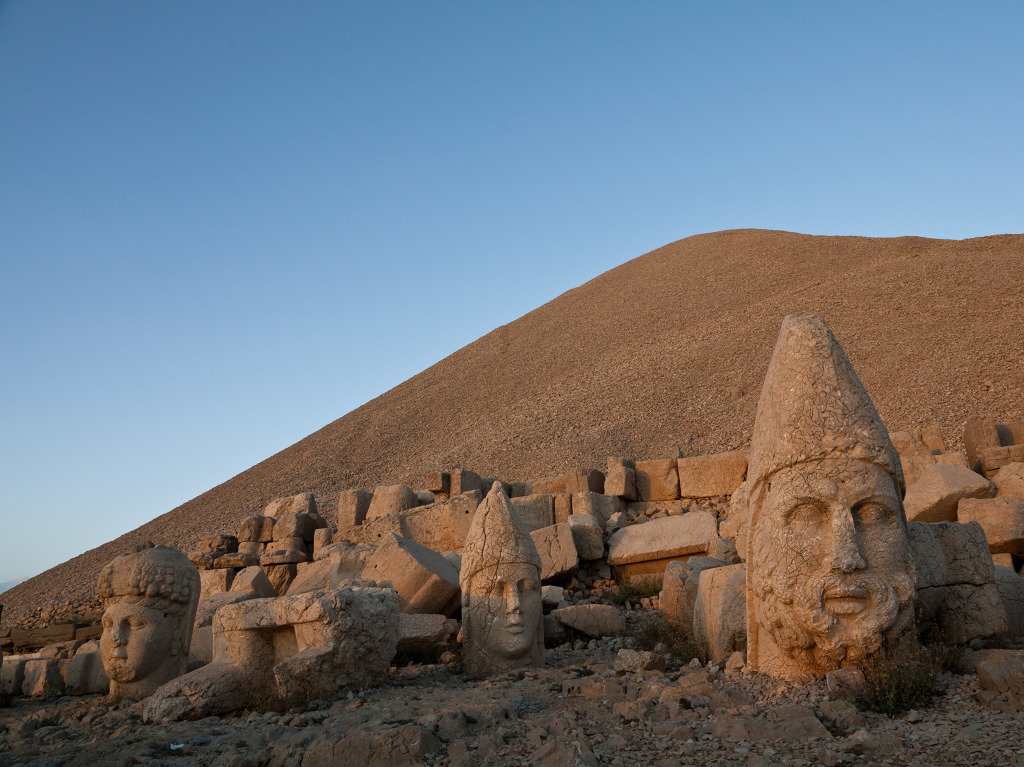 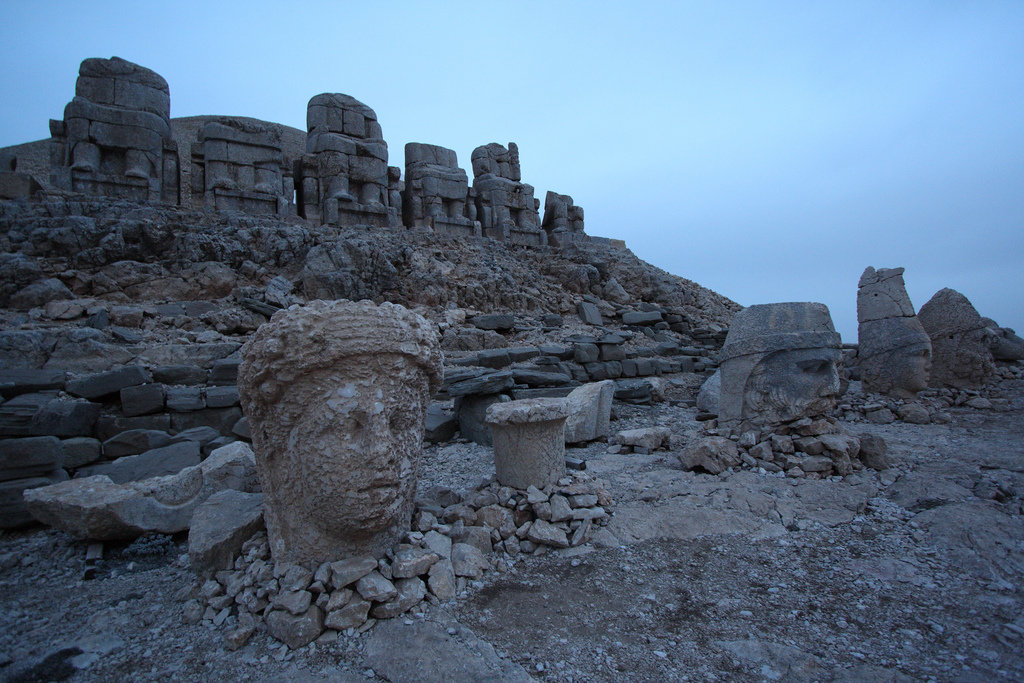 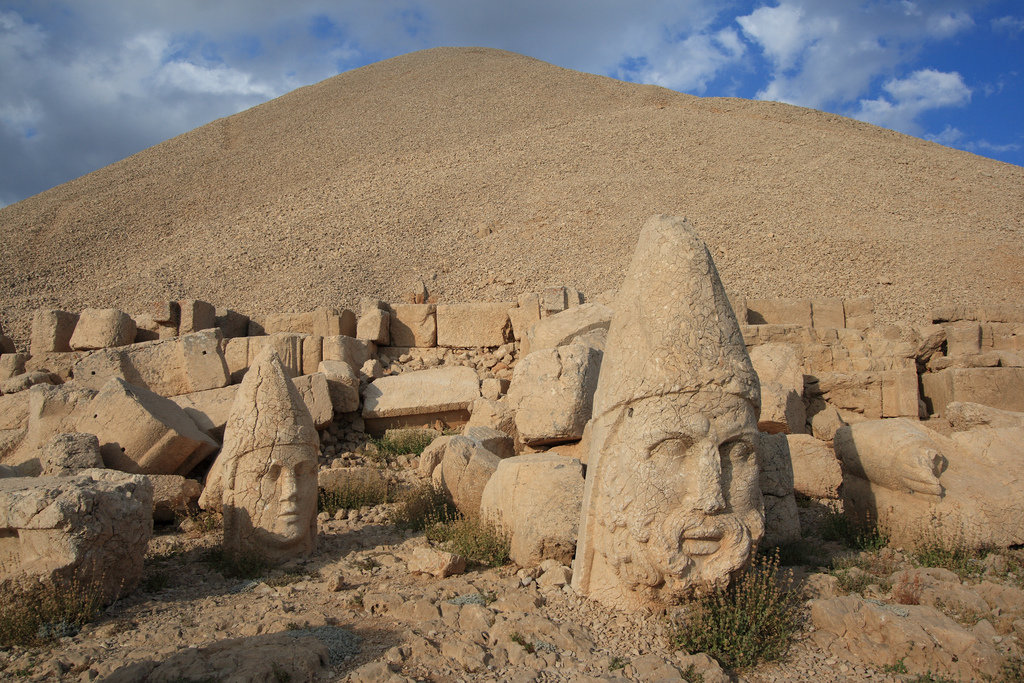 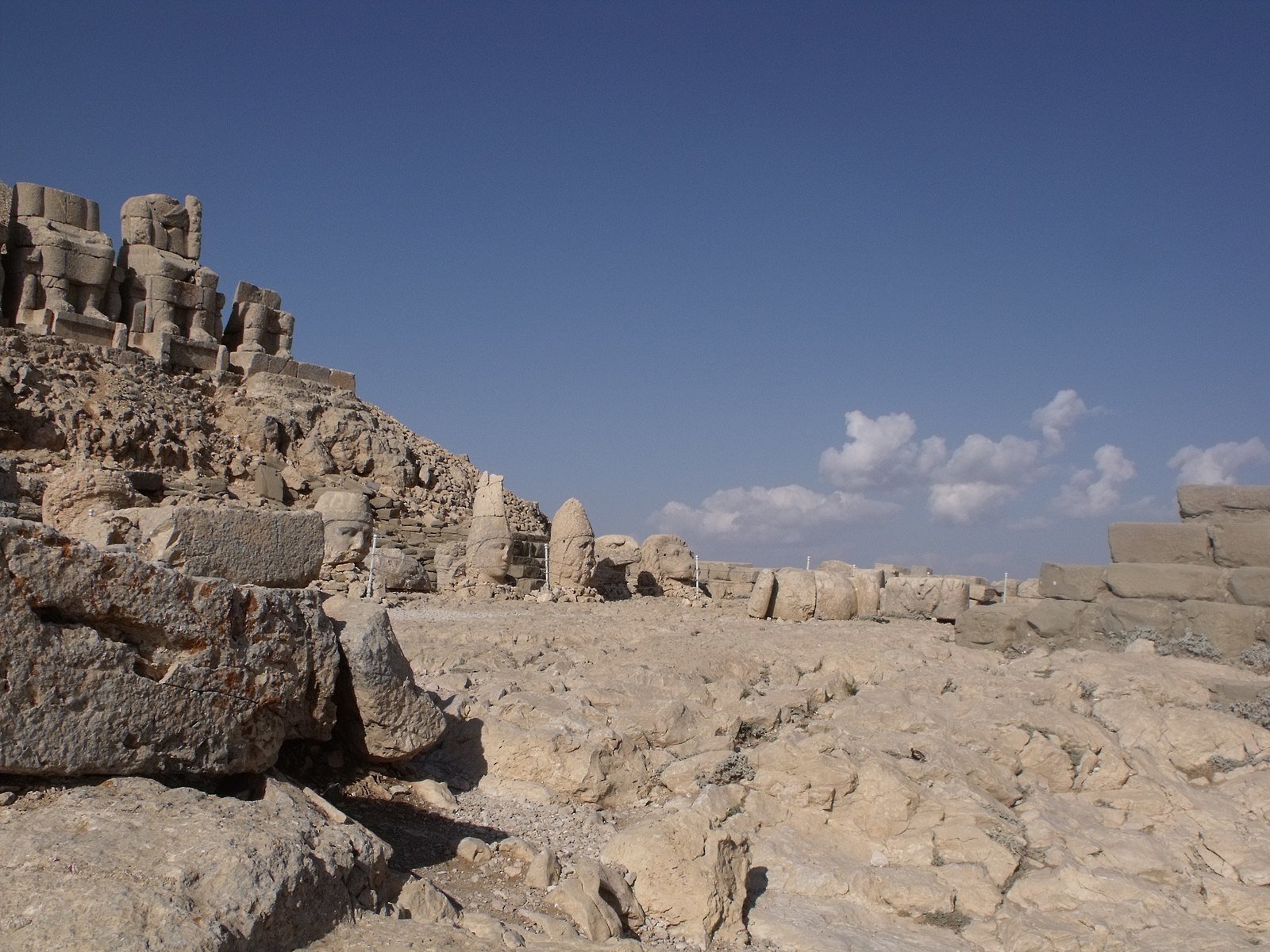 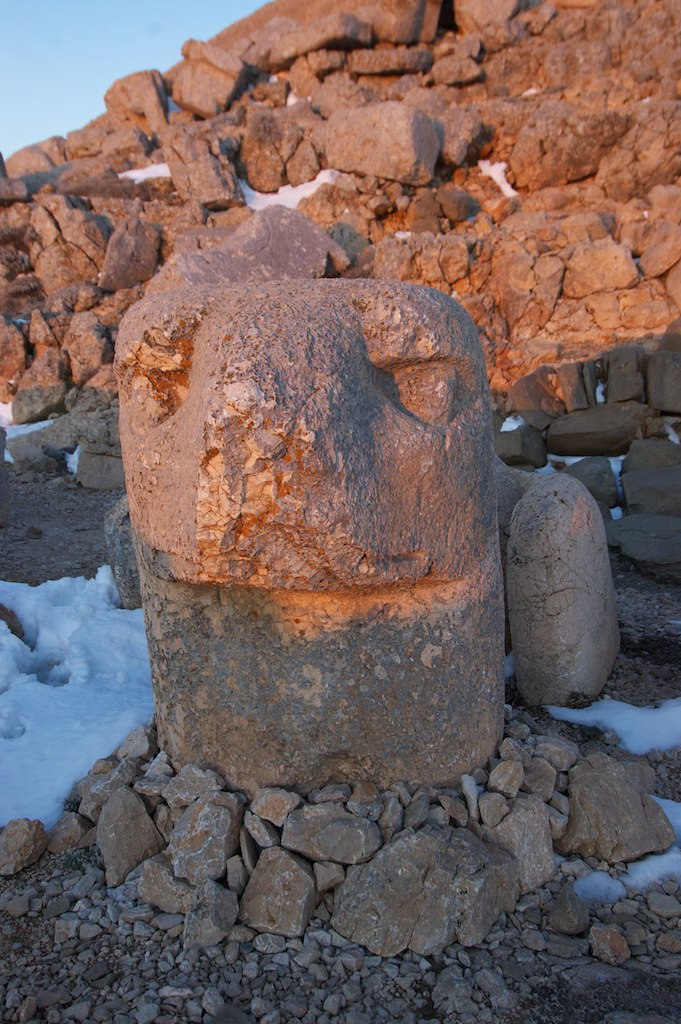 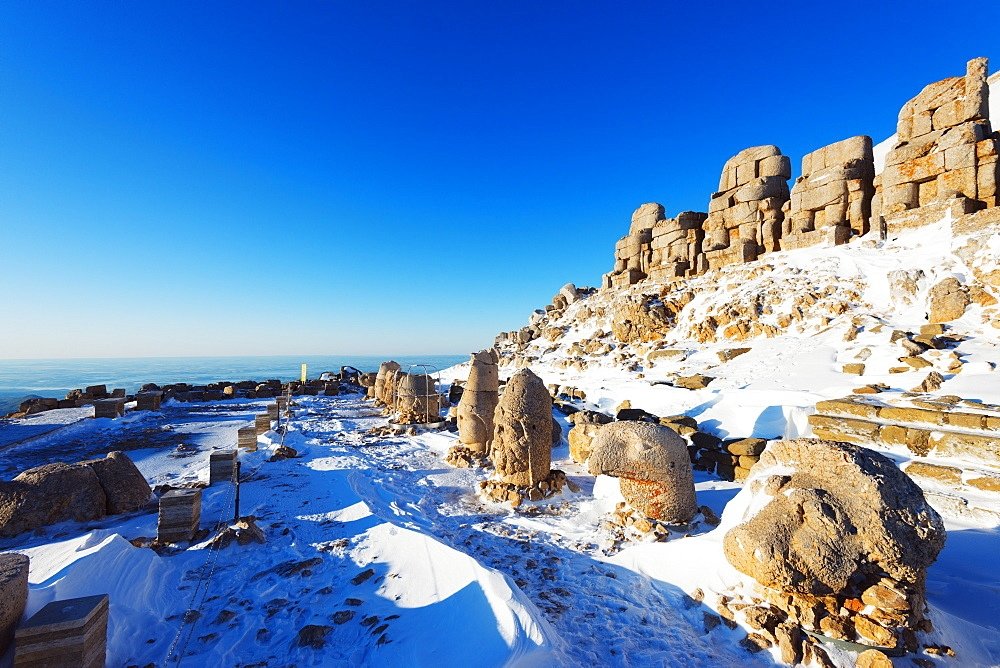 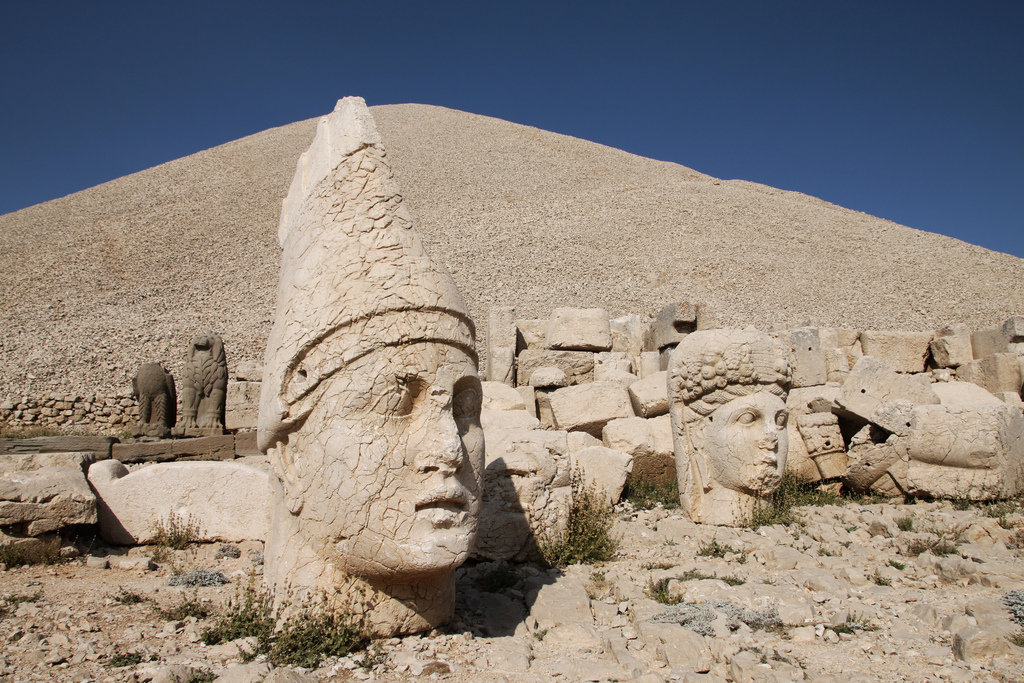 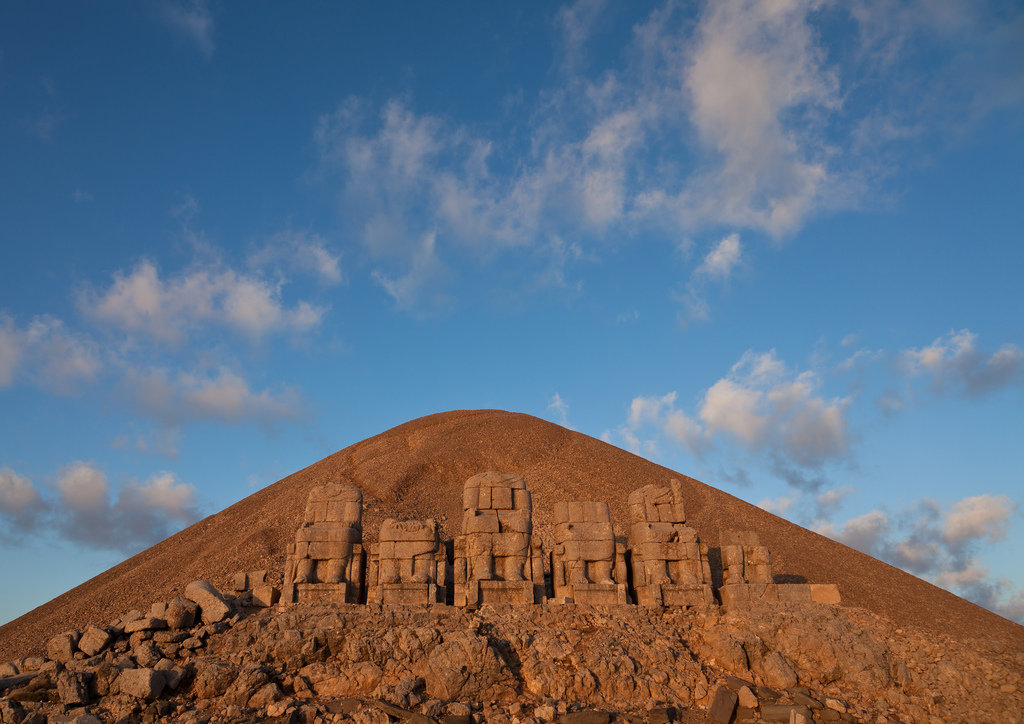 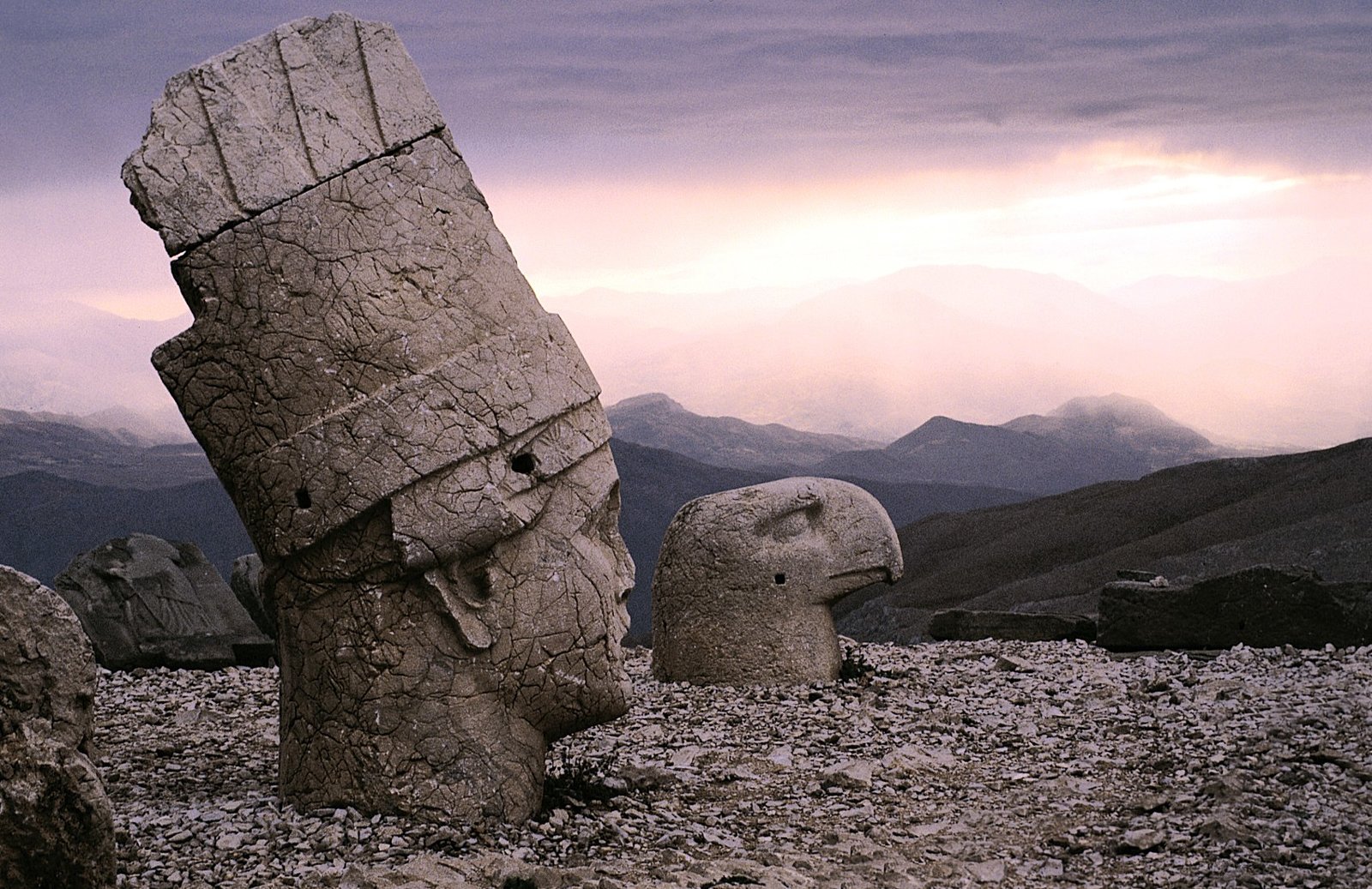 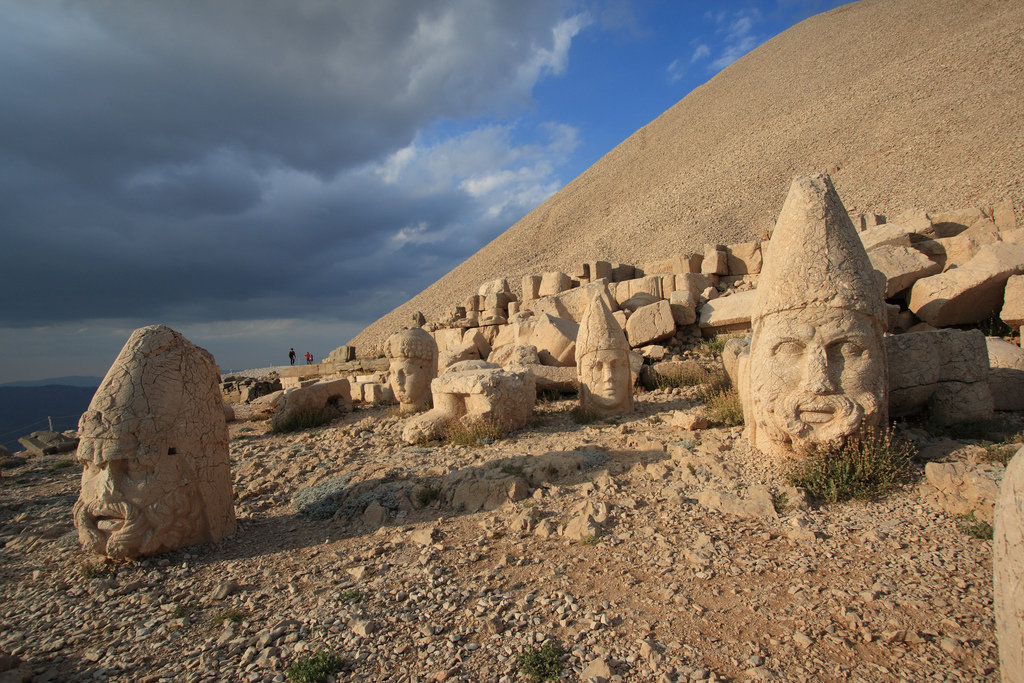 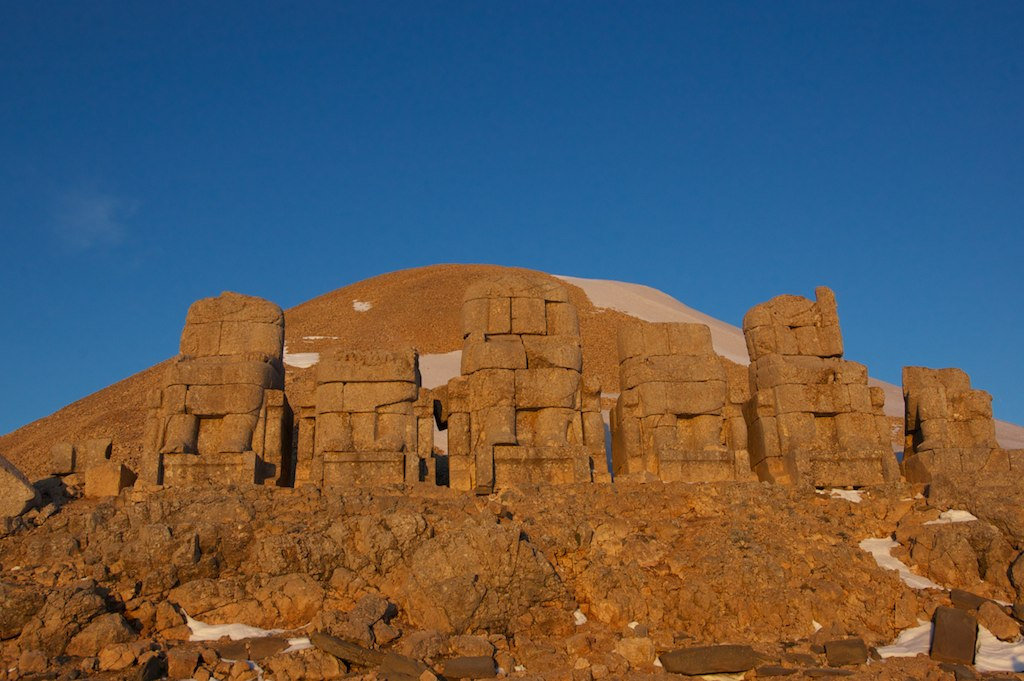 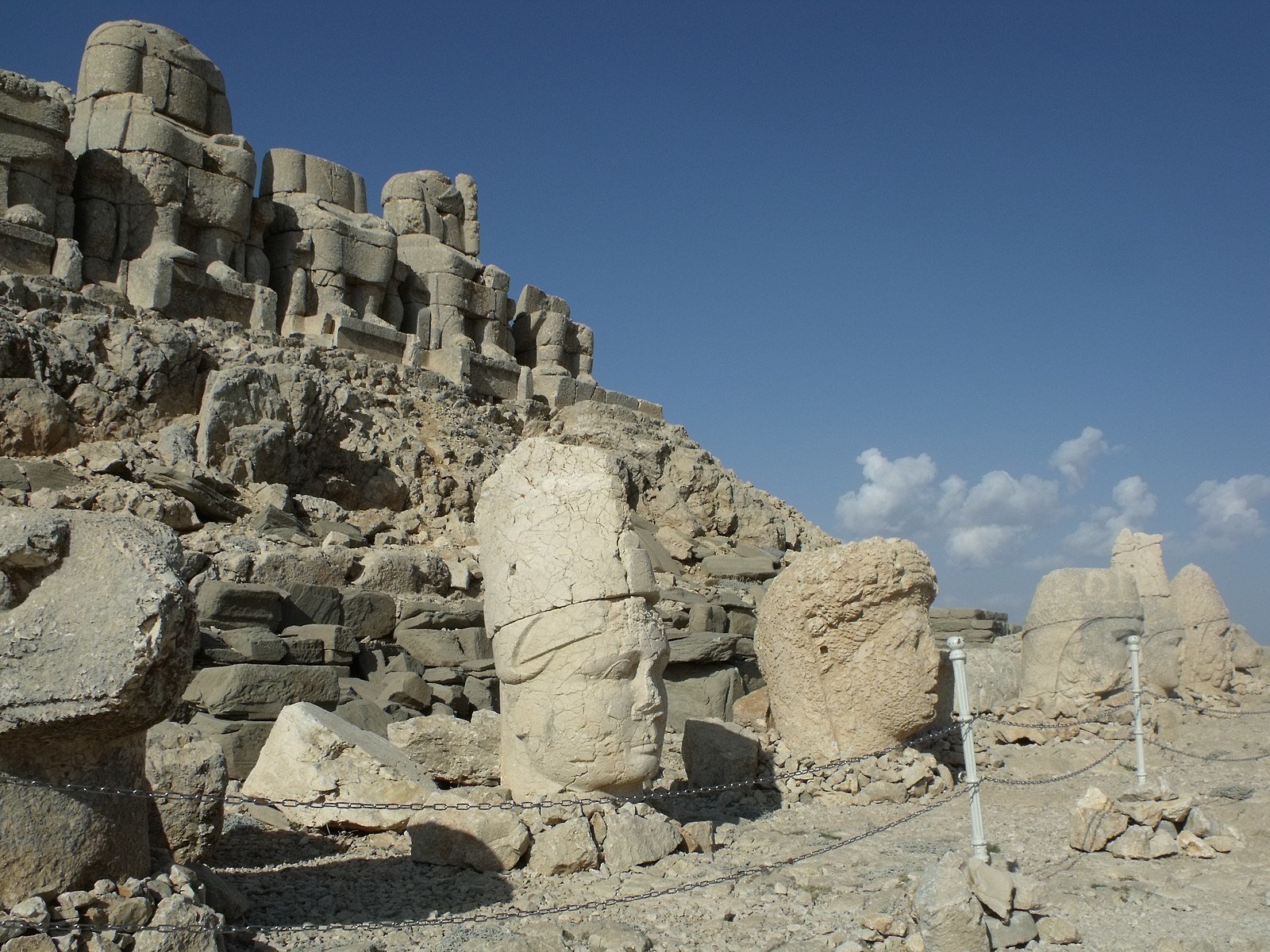 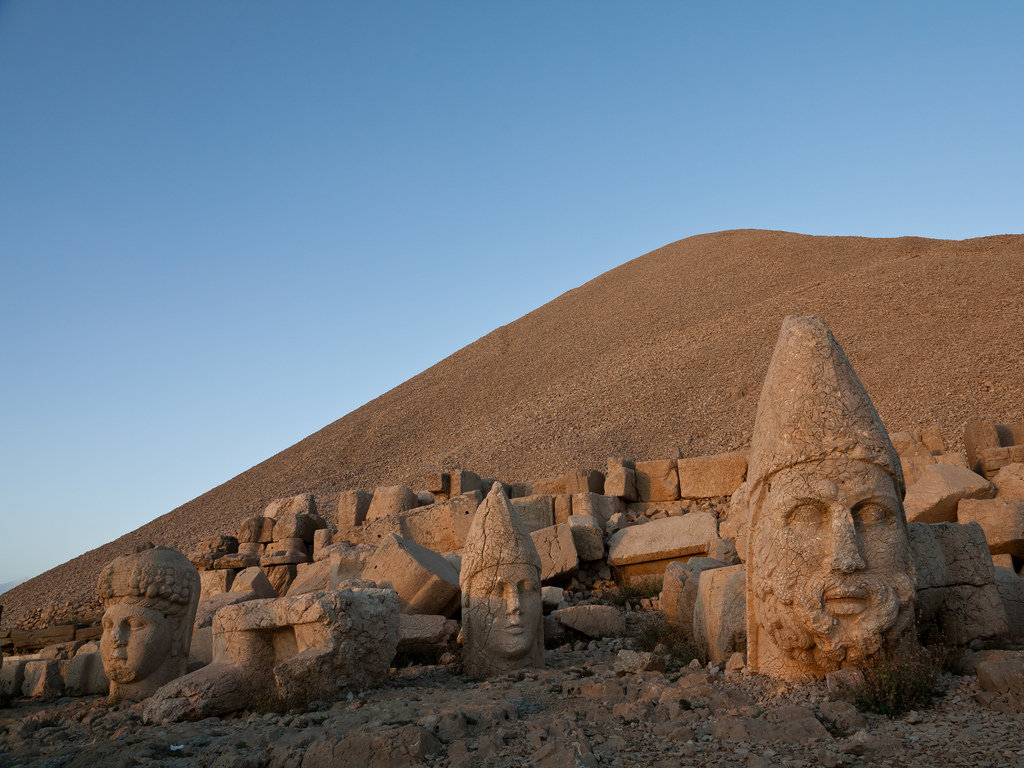 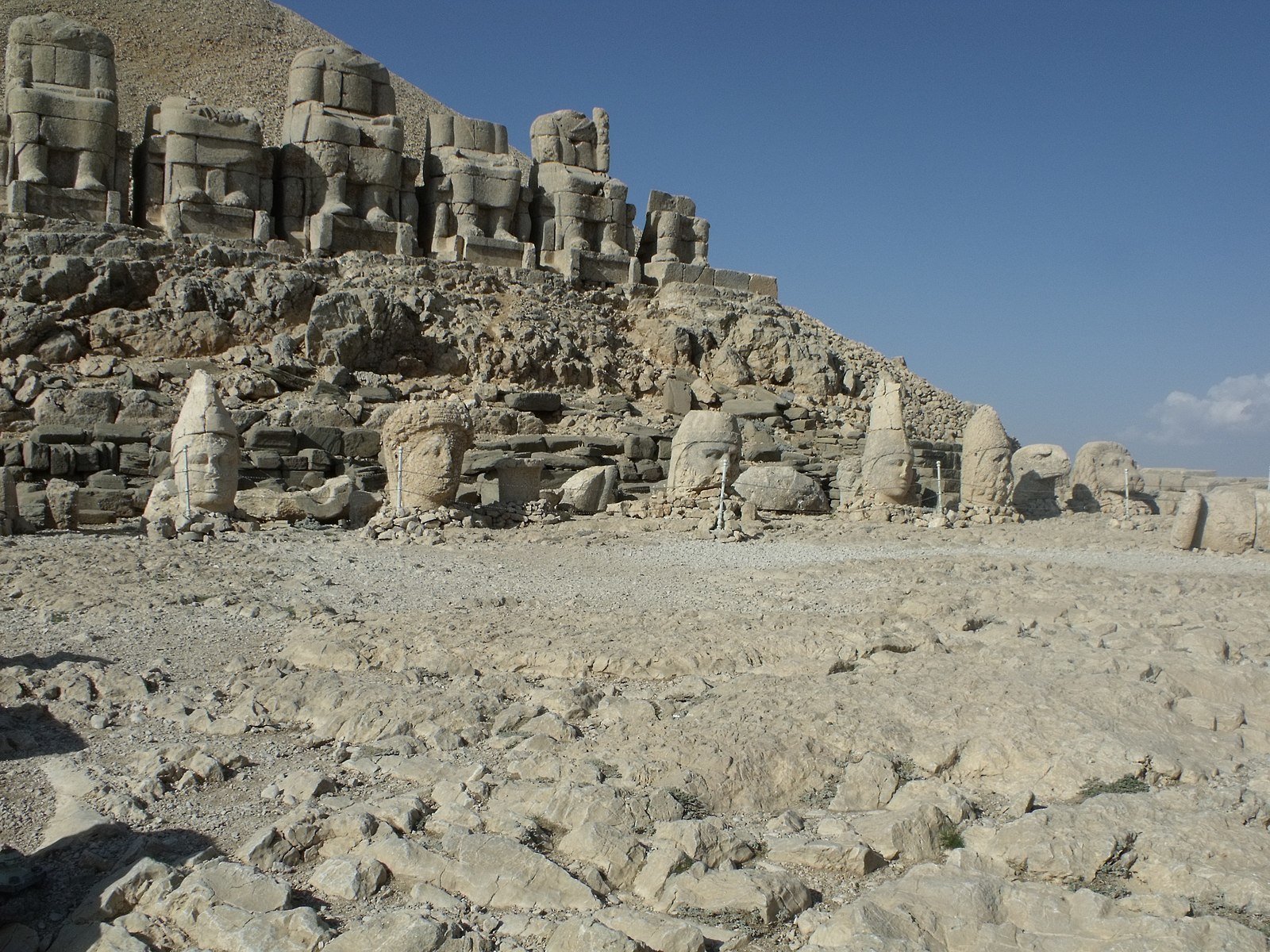 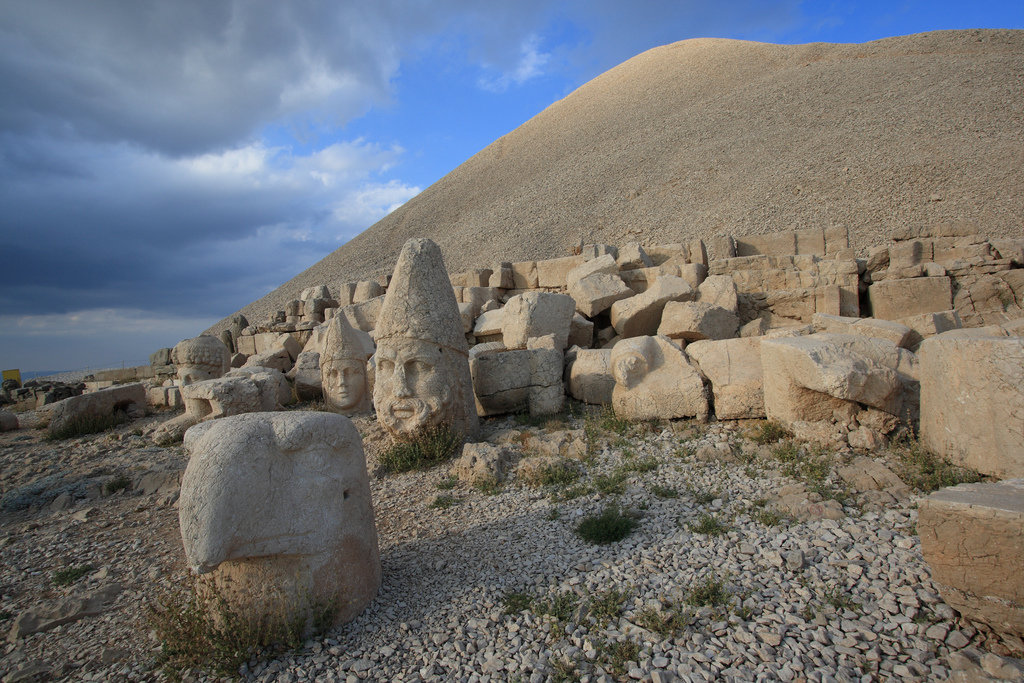 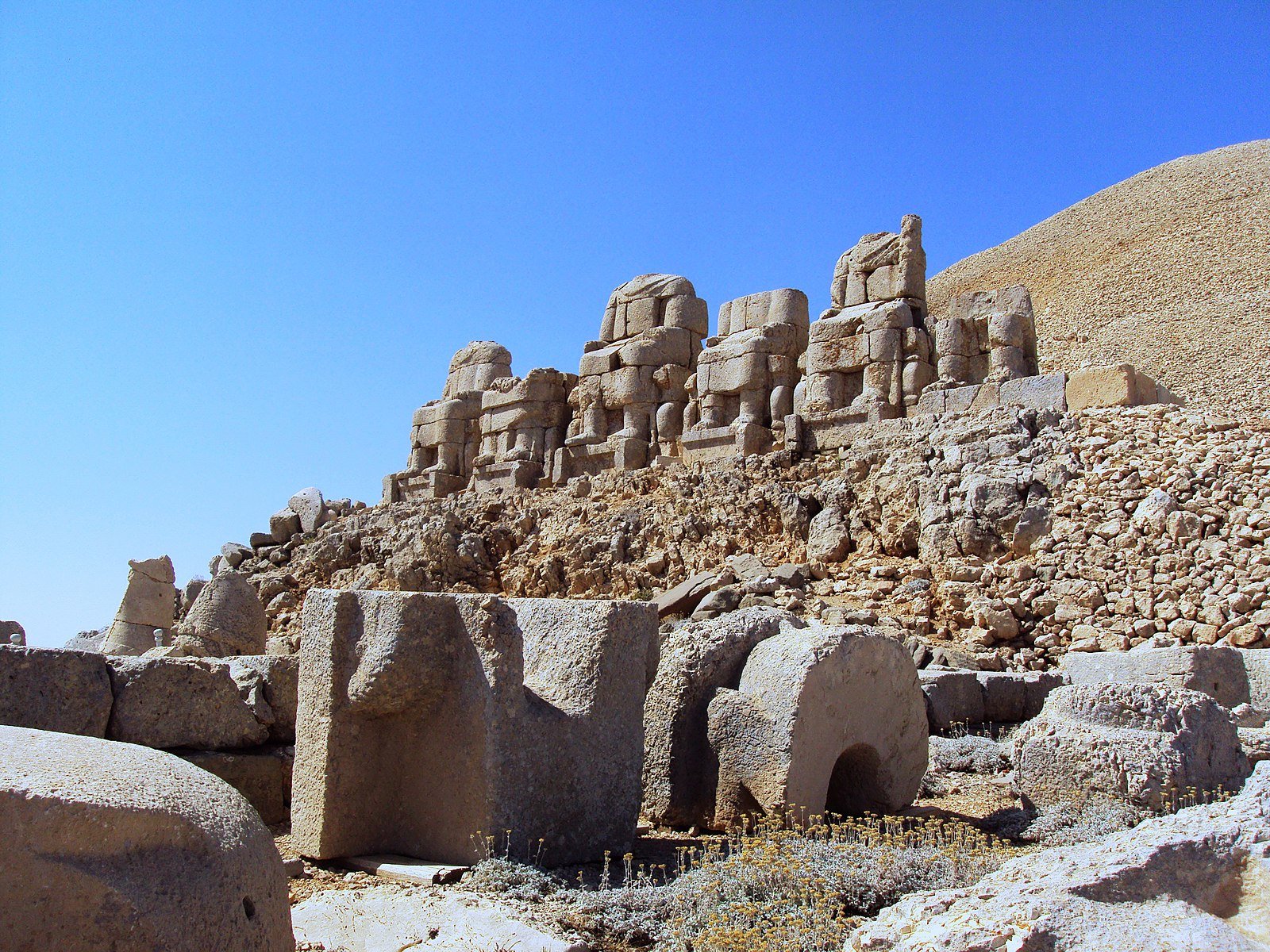