×
What are you looking for?
See all results
Surfing locations in Half Moon Bay 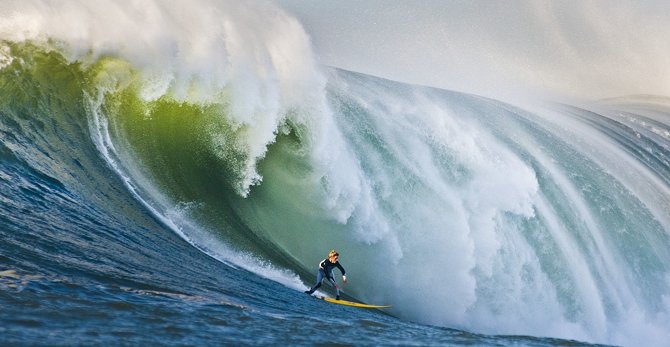 Mavericks is a surfing location in northern California about 2 miles (3 km) from shore outside Pillar Point Harbor, just north of the town of Half Moon Bay at the village of Princeton-by-the-Sea. After a strong winter storm in the northern Pacific Ocean, waves can routinely crest at over 25 feet (8 m) and top out at over 60 feet (18 m). Routinely, waves that break can be recorded on seismometers. The break is caused by an unusually shaped underwater rock formation.

Mavericks is a winter destination for some of the world's best big wave surfers. Very few riders become big wave surfers, and of those, only a select few are willing to risk their lives under the hazardous, sometimes deadly, conditions at Mavericks. An invitation-only contest is held there most winters, when the waves come.

Origin of the name

In early March 1967, Alex Matienzo, Jim Thompson, and Dick Notmeyer surfed the distant waves of Pillar Point. With them was Matienzo's roommate's white-haired German Shepherd, Maverick, who was accustomed to swimming with his owner and Matienzo while they were surfing. The three surfers left Maverick on shore, but he swam out to them. Finding the conditions unsafe for the dog, Matienzo tied him up before rejoining the others. The riders had limited success that day as they surfed overhead peaks about 1/4 mile from shore, just along the rocks that are visible from shore; they deemed the bigger outside waves too dangerous. The surfers named the location after Maverick, who seemed to have gotten the most pleasure from the experience.

Sea-floor maps released by the US National Oceanic and Atmospheric Administration in 2007 revealed the mechanisms behind Mavericks' waves. A long, sloping ramp leads to the surface. The ramp slows the propagation of the wave over it. The wave over the deep troughs on each side of the ramp continues at full speed forming two angles in the wavefront centered over the boundaries between the ramp and the troughs. The result of this is a U-shaped or V-shaped wavefront on the ramp that contains the wave energy from the full width of the ramp. This U-shaped or V-shaped wave then collapses into a small area at the top center of the ramp with tremendous force.

The left at Mavericks is rarely ridden, as the wave tends to be unreliable. It can be a much faster ride than the right, shooting riders down a quicker pipe barrel. Surfline says the left is "a short-lived explosion of hell and spitfire."

Jeff Clark grew up in Half Moon Bay, watching Mavericks from Half Moon Bay High School and Pillar Point. At that time the location was thought too dangerous to surf. He conceived the possibility of riding Hawaii-sized waves in Northern California. In 1975 at age 17 and with the waves topping out at 20–24 feet (6–7 m), Clark paddled out alone to face the break. He caught multiple left-breaking waves, thereby becoming the first documented person to tackle Mavericks head-on.

Other than a few of Clark's friends who had paddled out and saw Mavericks themselves, no big wave surfers believed in its existence. Popular opinion held that there simply were no large waves in California.

Dave Schmidt (brother of big wave legend Richard Schmidt) and Tom Powers, both from Santa Cruz, were two of the next people to surf at Mavericks, surfing with Clark on January 22, 1990. John Raymond, from Pacifica, Johathan Galili, from Tel Aviv, Israel, and Mark Renneker, from San Francisco, surfed Mavericks a few days later.

In 1990, a photo of Mavericks taken by Clark's friend Steve Tadin was published in Surfer magazine. This triggered interest in Mavericks. More photos of Mavericks appeared in surfing magazines, and before long, filmmaker Gary Medeiros released a movie, Waves of Adventure in the Red Triangle. As news of Mavericks spread, many big-wave surfers came and surfed there.

On December 23, 1994, during a week of huge swells, notable Hawaiian big-wave riders Mark Foo, Ken Bradshaw, Brock Little, Mike Parsons, and Evan Slater visited Mavericks. In the late morning, Foo rode on a late takeoff into an 18-foot (5 m) wave, caught the edge of his surfboard on the surface, and fell forward into a wipe out near the bottom of the wave. A few hours later, a fellow surfer traveling back to shore on a boat noticed a body in the water, which was identified as Foo. The only visible injury was a small cut on the forehead. Many surfers believe that the fall knocked the wind out of Foo and he was tied down by his leash to a rock formation.

News of Foo's death traveled quickly to the far reaches of the surfing community. The accident afforded Mavericks greater notoriety and prompted the formation of the Mavericks Water Patrol by Frank Quirarte and Clark. The accident also triggered a continuing discourse around the safe use of surfboard leashes while surfing extreme waves. Many believed that Foo's surfboard leash may have contributed to his death. Leash proponents defend it as a useful convenience and as insurance against losing the surfboard, a form of flotation device, a means for a fallen surfer to find the surface by following the leash cord to the buoyant board. Opponents argue that a leash can cause the rider to collide with his board in a wipe out and that the leash can also loop around the surfer's arms, legs or the neck when underwater. Quick-release velcro leashes have since become standard surfing equipment to address some of these risks.

Milosky had been named the North Shore Underground Surfer of the Year in February 2011. He used some of his $25,000 prize to travel to Half Moon Bay to catch one of the last big swells of the season at Mavericks.

The first surfing contest at Mavericks, now known as Titans of Mavericks, was held in 1999, and has been held nine times through 2014. The organizers invite 24 big wave surfers annually to compete in the one-day event, but it is only held if wave conditions are favorable during the competition season (currently November 1-March 31).

In the fall of 2010 a group of surfers, community leaders and contest organizers formed the Half Moon Bay Surf Group, Inc., with the aim of controlling the contest. In October, the San Mateo Harbor Commission granted them the permit and official planning of the inaugural “The Jay at Maverick’s Big Wave Invitational" (as it was then called) began. Invited competitors included 11-time ASP World Champion Kelly Slater and 23 others. However, the contest was not held due to lack of waves in 2011 and 2012. The most recent contests were held in 2013 (won by Peter Mel) and 2014 (won by Grant Baker). The newly branded "Titans of Mavericks" contest is now governed by five prestigious Mavericks riders known as the "Committee 5" [1][2]. The most recent Mavericks Surf contest was held on February 12, 2016.

In October 2006, the Monterey Bay National Marine Sanctuary proposed banning personal watercraft from Mavericks, which led to disputes within the sport.

The following is a list of past Mavericks invitational competitions and winners.[3]

The first videos were shot by Eric W. Nelson in February 1990, catching Clark, Schmidt and Powers. Eric was shooting for his community access television show "Powerlines Surf-Spots". This was the origin of the Powerlines Productions company that showcases big wave surfing around the world.

On December 11, 1998, they combined their efforts and produced the mini documentary twelveleven.

Clark and Mavericks are featured in the 1998 documentary Mavericks, a one-hour PBS film that chronicles the early years, and the 2004 film Riding Giants, which documents the history of big wave surfing. Directed by skateboarder turned documentary producer Stacy Peralta (best known for the skating documentary Dogtown and Z-Boys), Riding Giants includes interviews and commentary materials with many of the surfers mentioned in this article.

Chasing Mavericks, a 2012 biopic about Mavericks surfer Jay Moriarity, starred Gerard Butler as Frosty Hesson, Abigail Spencer as Brenda Hesson, Frosty's wife. Jonny Weston as Jay Moriarity, Elisabeth Shue as Christy Moriarity and Leven Rambin as Kim Moriarity. Maya Rains plays Roque Hesson, while Patrick and Asher Tesler (twins) portray Lake, son of Frosty and Brenda. Moriarty's spectacular wipeout in 1994 had landed the 16-year-old surfer in the pages of The New York Times and on the cover of Surfer magazine. On December 19, 2011, film star Butler survived a near-death accident, pounded by 12–16 foot waves. Butler was held underwater for several waves and dragged through rocks until rescued by a safety worker on a jet ski. According to eyeforfilm.co.uk, "Butler was knocked off his board by a freak wave. He was trapped underwater as two more waves went over him, and witnesses say he took the force of four or five waves to the head. He was also dragged through rocks before rescuers managed to reach him and get him to the shore. Butler was conscious when pulled from the water and has spent the next sixteen hours in Stanford Medical Center."

A memoir, Making Mavericks by Frosty Hesson with Ian Spiegelman, was released by Zola Books in October 2012. The book recounts Hesson's time as one of the first to conquer the massive break at Mavericks and his mentoring of Moriarity.

On June 10, 2013, at its Worldwide Developers Conference, Apple announced that the latest version of its Mac operating system OS X (version 10.9) would be entitled Mavericks. Apple said their new operating software generations would be named after places in California that have inspired them.

The Ritz-Carlton
Invitation-only contest held between Nov. and March along the world-renowned big-wave break, just 1 mile off the coast. On 24-hours notice, 24 of the most skilled surfers take on the dangerous waves.

See all hotels See all
The Ritz-Carlton, Half Moon Bay

Coastside Inn at Half Moon Bay

Moss Beach Distillery is a restaurant in Moss Beach, California,

Venice Beach, CA, USA is a tourist attraction, one of the Beaches in

Half Moon Bay State Beach is a Шаблон:Convert stretch of prote

Hanging bunker at Devil's slide is an abandoned military triangulation

The San Francisco Bay Discovery Site is a marker commemorating the

Sirius Sport Resort is a tourist attraction, one of the Surfing

Kahaluʻu Bay (; Hawaiian pronunciation: ]) is a historic district a 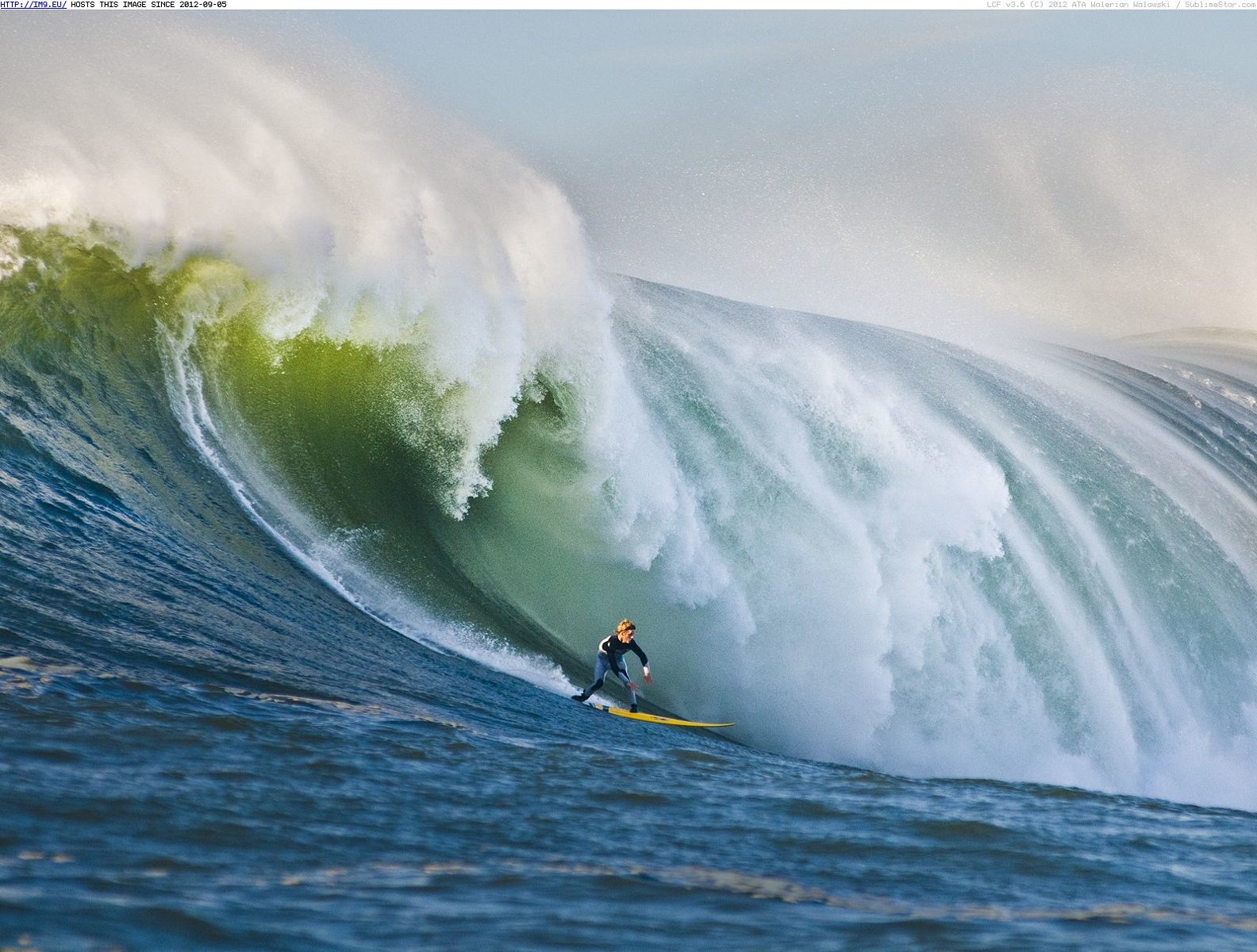 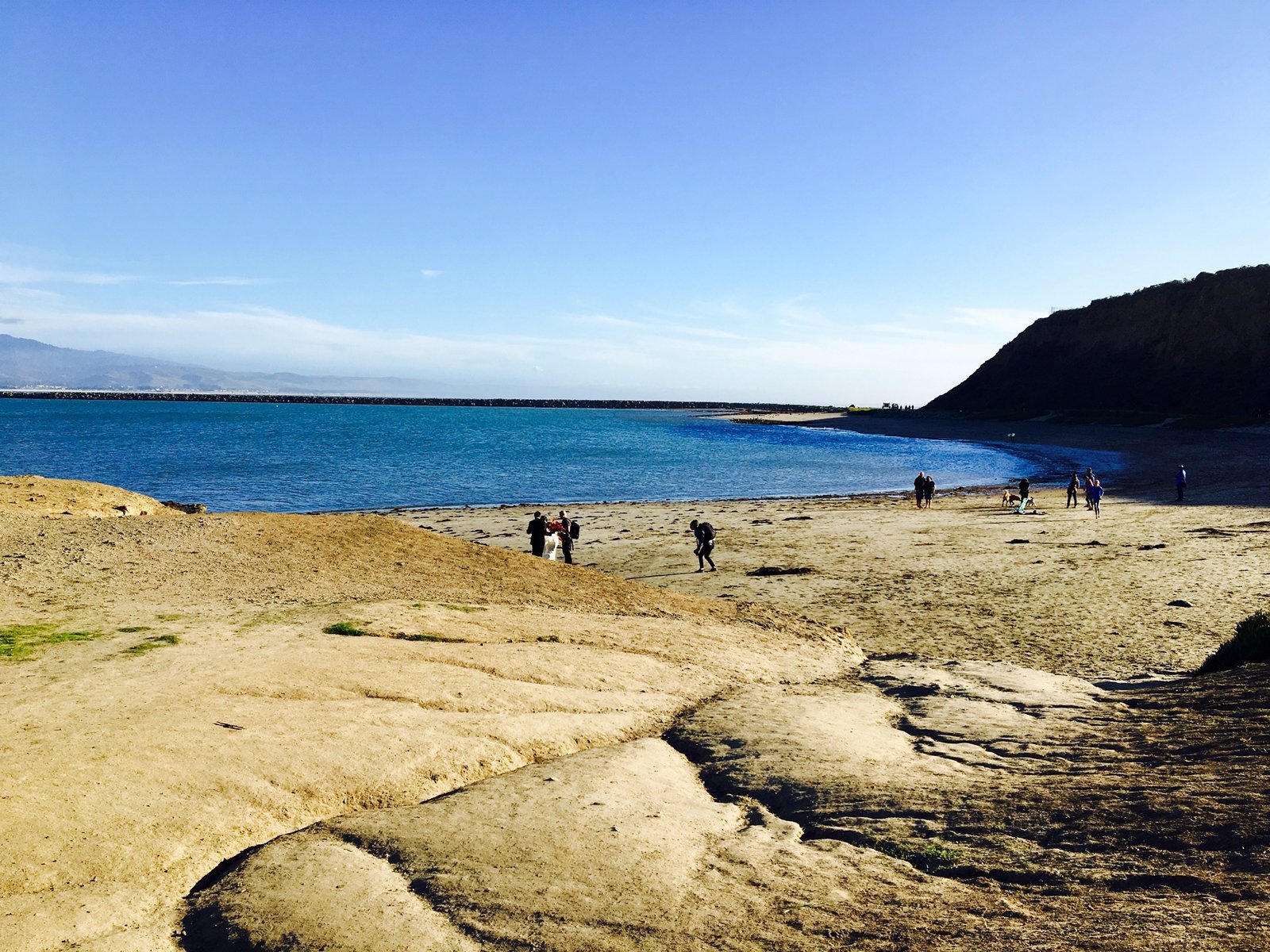 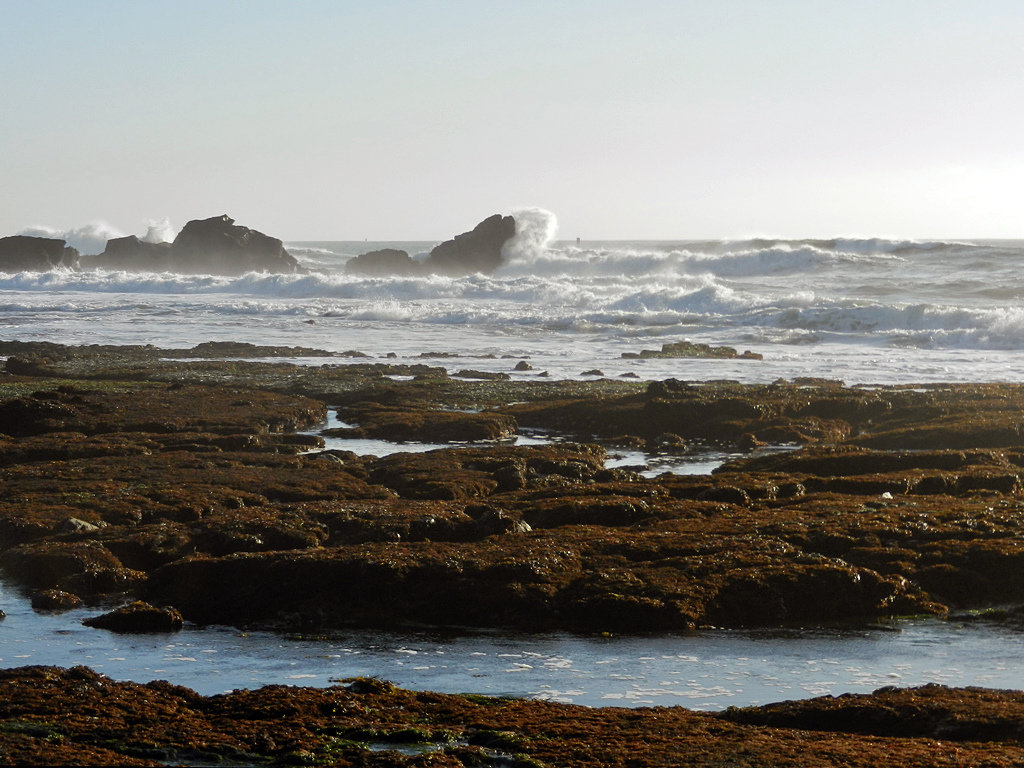