×
What are you looking for?
See all results
Churches in Leeds 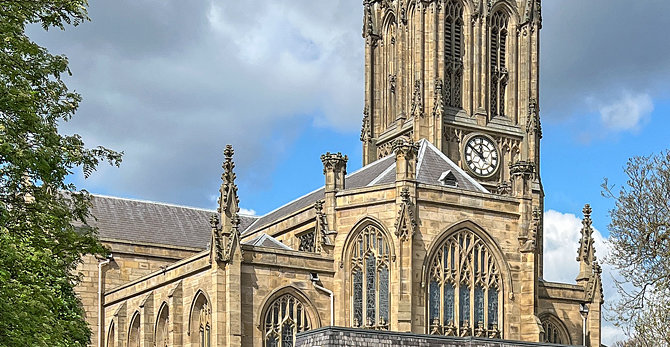 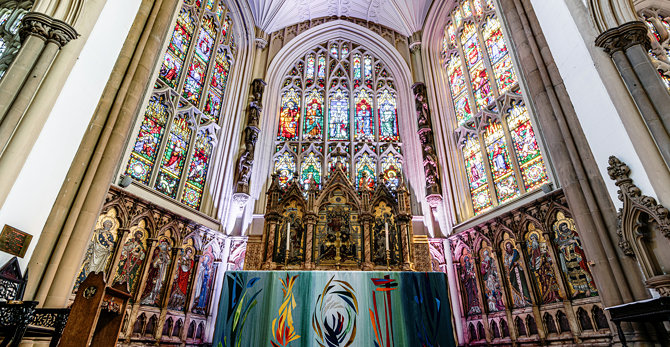 An early 7th century church on this site was burned down in 633 AD. A church at Ledes is mentioned in the 1086 Domesday Book. The church was rebuilt after a fire in the 14th century, and again in the 19th century. Walter Farquhar Hook as Vicar of Leeds was responsible for the construction of the present building consecrated on 2 September 1841 with Florence Nightingale and Dr Edward Bouverie Pusey in the congregation. The architect was Robert Dennis Chantrell and the first Organist of the new Church Dr Samuel Sebastian Wesley. At the time of its construction, the new Leeds parish Church was the largest new Church in England built since Sir Christopher Wren's new St Paul's Cathedral erected in the years following the Great Fire of London and consecrated in 1707. Among very many famous artefacts and memorials still in the present Leeds Parish Church are the celebrated Anglian cross on the altar flat and a brass commemorating Captain Oates of Scott's ill-fated Antarctic expedition, who had strong Leeds connections. Magnificent Flemish stained glass enhances the apse of Chantrell's interior - he designed the windows to fit the glass - and of more recent date is Sally Scott's magnificent Angel Screen at the north, Tower Porch, entrance - a munificent gift from the family of the late Lord Marshall of Leeds installed in 1997. The superb organ, parts of which date from 1841 and earlier, is one of the finest instruments to be found in any English parish church; in essence, it is a Harrison and Harrison of 1914 vintage, but incorporating significant amounts of pipework by the famous Edmund Schulze.

The archives of Leeds Parish Church are held at the Leeds office of West Yorkshire Archive Service. The church has memorials to the Leeds families who were prominent in the parish, including those of Kitchingman, Fenton, Lodge, Milner, Cookson, and Ibbetson.

The church is in the Anglican Diocese of Ripon and Leeds (which has its cathedral at Ripon), in the Parish of Leeds City along with the splendid Georgian Church of Holy Trinity, Boar Lane and the congregations worshipping at St Mary's Lincoln Green and at the Chapel of the Holy Spirit in Centenary House. The Parish Church is at the easternmost extremity of the modern-day city centre, within a spacious precinct bordering on two of the city's oldest thoroughfares - Kirkgate (now part of the Inner City Loop Road) to the north and The Calls to the south. Another very ancient pathway, High Court Ings, connects the Western Precinct with High Court. The Rector of Leeds, the third holder of the title since the establishment of the Parish of Leeds City in 1990, is the Reverend Canon Tony Bundock. Additional to the famous choral foundation and other youth work from the Parish Church, work with young people undertaken by the Parish of Leeds City also includes The Market Place drop-in centre and St Peter's Church of England Primary School, Burmantofts (Head Teacher: Mrs Elizabeth Holliday; Choir Conductor: Mr John Robertson), where the Chaplain is the Lay Minister to St Mary, Lincoln Green and Holy Trinity, Boar Lane, Canon Ann Nicholl.

During choir terms, from September to June, there are normally at least seven choral services each week. Four are sung by the Boy Choristers with the Choral Scholars and Lay Clerks; the remaining three services are sung by the boys alone (normally Mondays), the men's voices (normally Thursdays) and by the Girl Choristers on Saturday mornings. Once each term, the boys, girls and men all sing together. The church's website and the Church Services column printed daily in the Yorkshire Post give details of regular and special services along with the musical and other events that take place regularly within the church. There is an organ recital at 12.30 pm every Friday from September to July inclusive, with a fortnight's break for Christmas and the New Year. There are special Sunday evening recitals through August, beginning at 7.45 pm.

The building is open to visitors for at least seven hours each day. Café Create, a community enterprise established from St George's Crypt, serves refreshments and light meals.

Leeds Parish Church is a grade I listed building, and a member of the Greater Churches Group. Its mission and vision for future service to the City of Leeds, the Diocese of Ripon and Leeds and the Church of England are a constant care and concern of those who seek to serve one of England's best-loved churches as well as the whole Parish of Leeds City. Sir John Betjeman in a BBC Broadcast remarked that: "There's High Church, Low Church and Leeds Parish Church".[]

This is the only Church of England parish church in England without a resident Choir School to have a full programme of weekday choral services additional to the usual Sunday liturgies. Organists from 1842 include Samuel Sebastian Wesley 1842-1849, Dr [later Sir] Edward Bairstow 1906-1913, Dr (Alfred) Melville Cook 1937-1956 and Dr Donald Hunt [OBE 1996] 1957-1975. The present Organist and Master of the Music, in office since 1975, is Dr Simon Lindley who came to Leeds after service at St Albans Cathedral and Churches in the City of London; Dr Lindley is also the Leeds City Organist at Leeds Town Hall. The Sub Organist and Director of the Girls' Choir is Mr David Houlder, formerly of Liverpool Cathedral and Director of Music at the famous Bluecoat School. The Church's most recent Organ Scholar, Alexander Binns from Halifax, moved to a similar position in Autumn 2009 at The Queen's Free Chapel of St George Windsor Castle. The Boy Choristers of Leeds Parish Church attend Church each weekday except Thursday, Friday evenings, Saturday mornings and twice on a Sunday; they come from a number of schools in the City and farther afield. The adult choir consists of lay clerks (including a number of former boy choristers), choral scholars (undergraduates from both the University of Leeds and Leeds College of Music) and supernumerary singers - altos, tenors and basses, some of whom are former choral scholars and lay clerks. During term time, there is normally Evensong by the full Choir on Wednesday and Friday evenings, by the boys on Monday and the men on Thursday. A flourishing semi-professional adult chamber choir, Saint Peter's Singers of Leeds was founded in 1977 and meets for rehearsals every Sunday evening during term time and present regular concerts as well as singing at a number of choral services each season including at the end of each Summer Term a special memorial Evensong for the late John Barrie Hanson - a member of the Singers and of the Parish Church Choir. The recently formed Girl Choristers, a group founded in 1997, meet weekly on a Saturday (on many Saturdays singing Morning Worship) as well as participating in events involving the full choral foundation on special occasions. The very fine 1914 Harrison & Harrison organ has been restored in 1927 and 1949 by Harrison's themselves; in 1965 by Wood, Wordsworth and, most recently, in 1997 by Andrew Carter. The restoration of the blowing plant and refurbishment of the blower house were also undertaken in 1997 by Allfab Engineering of Methley.

Tips & Hints
Arrange By:
Popular first New first
There are no tips nor hints for Leeds Parish Church yet. Maybe be you will be the first one to post useful information for fellow travellers? :)

See all hotels See all
The Queens - Q Hotels

The Royal Armouries houses the British national collection of arms and

Thwaite Mills is an industrial museum in Leeds, West Yorkshire,

The Ascension of The Lord, Lavender Hill is an Anglo-Catholic church 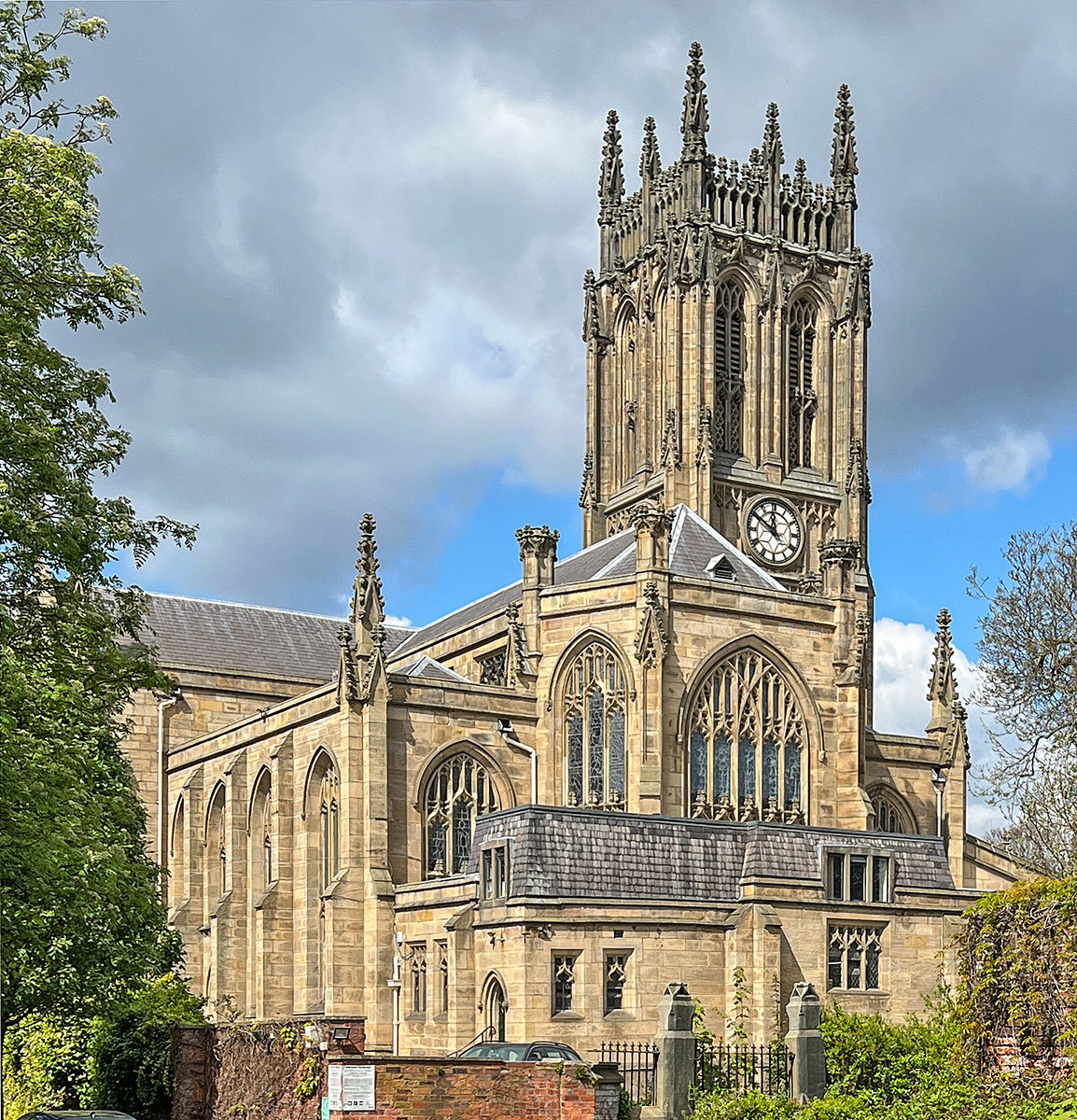 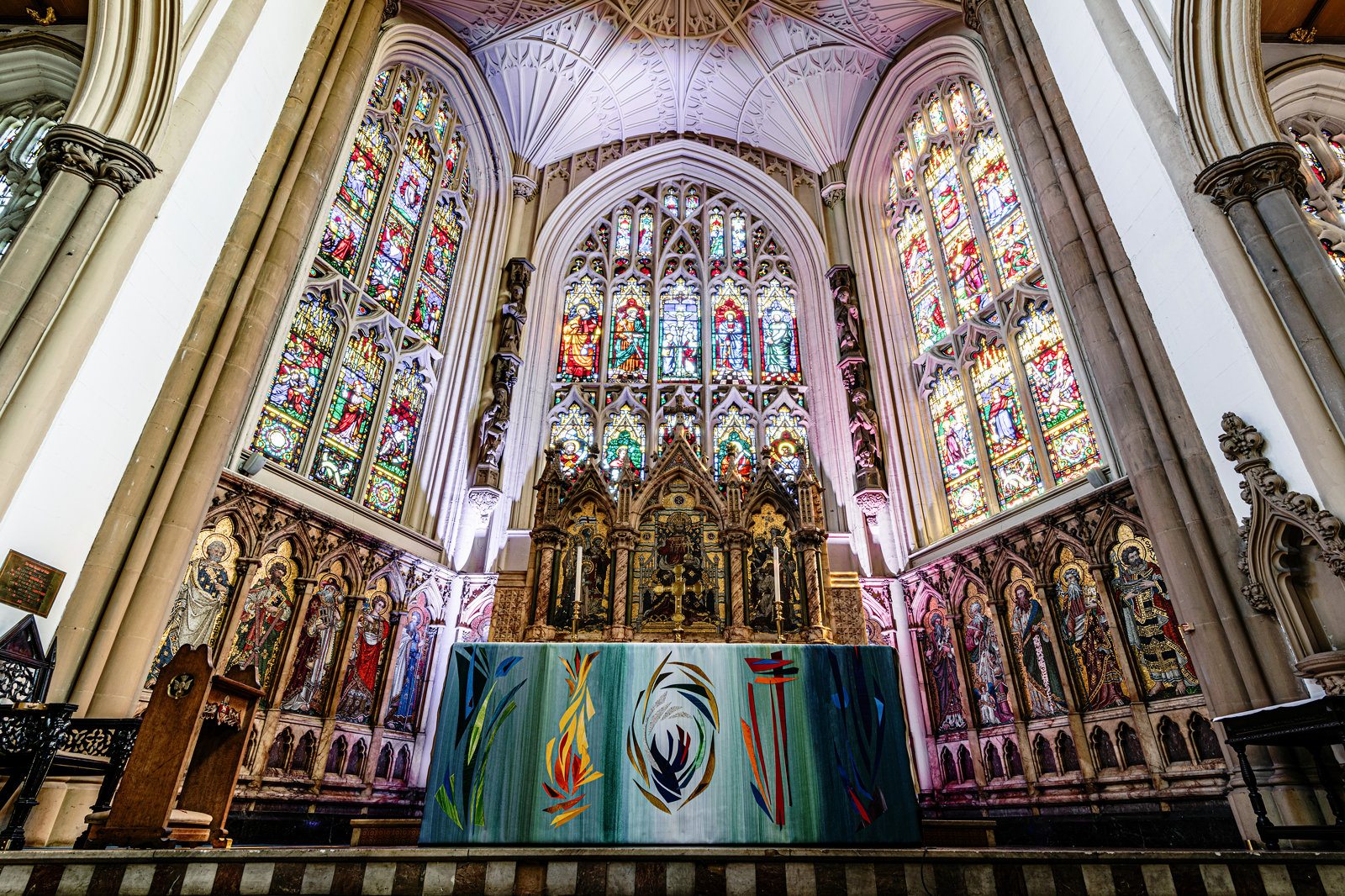 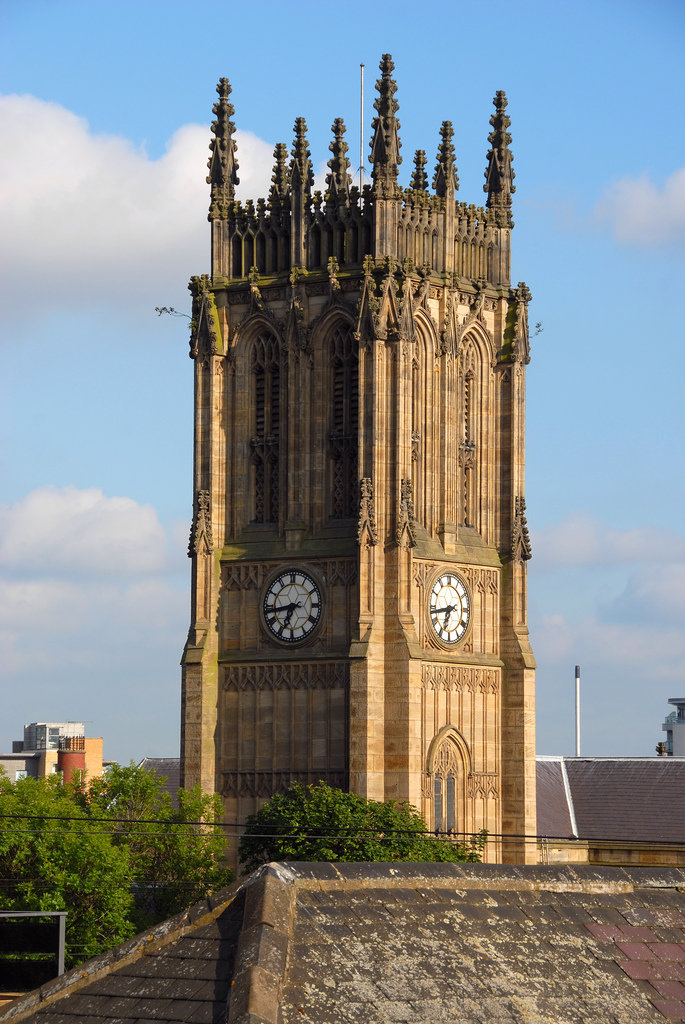 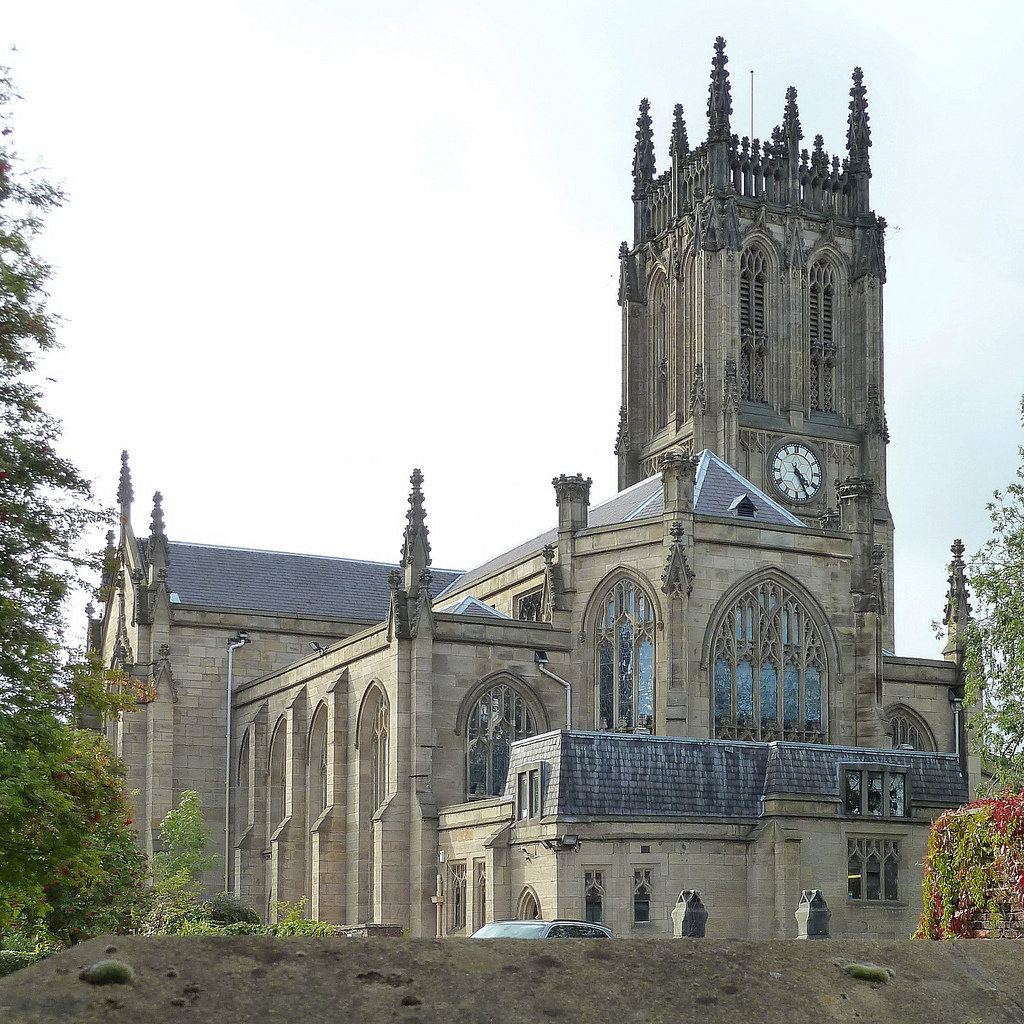