×
What are you looking for?
See all results
Archaeological sites in Eskihisar

Laodicea on the Lycus 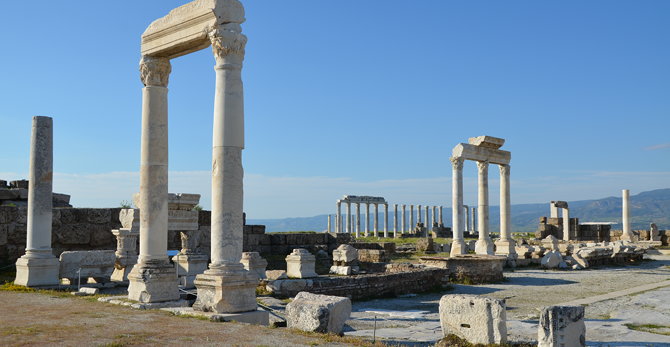 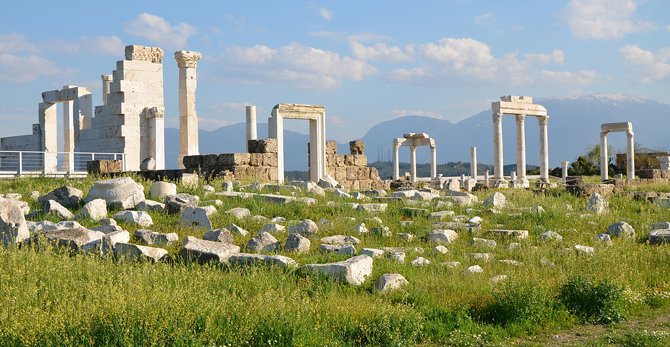 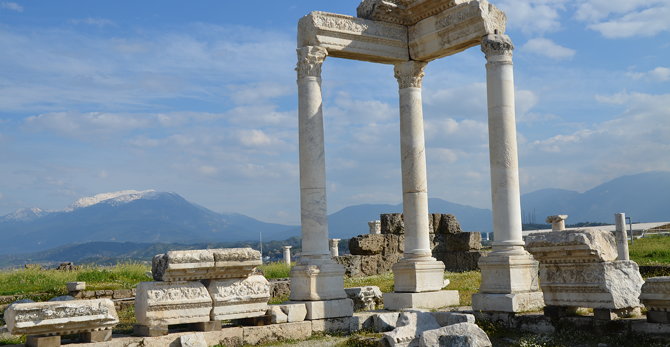 Laodicea on the Lycus (Greek: Λαοδίκεια πρός τοῦ Λύκου; Latin: Laodicea ad Lycum, also transliterated as Laodiceia or Laodikeia, earlier known as Diospolis and Rhoas) was the ancient metropolis of Phrygia Pacatiana (also attributed to Caria and Lydia), built on the river Lycus, in Anatolia near the modern village of Eskihisar (Eski Hissar), Denizli Province, Turkey.

Laodicea is situated on the long spur of a hill between the narrow valleys of the small rivers Asopus and Caprus, which discharge their waters into the Lycus. The town was originally called Diospolis, "City of Zeus", and afterwards Rhoas,, and Laodicea, the building of which is ascribed to Antiochus II Theos, in 261-253 BC, in honor of his wife Laodice, was probably founded on the site of the older town. It was approximately 17 km west of Colossae, and 10 km south of Hierapolis. It was approximately 160 km east of Ephesus and, according to Strabo, it was on a major road. It was in Phrygia, although some ancient authors place Laodicea in differing provincial territories – not surprising because the precise limits of these territories were both ill-defined and inconstant – e.g. Ptolemy and Philostratus) call it a town of Caria, while Stephanus of Byzantium (s. v.) describes it as belonging to Lydia.

At first Laodicea was not a place of much importance, but it soon acquired a high degree of prosperity. In 220 BC Achaeus was its king. In 188 BC, the city had passed to the Kingdom of Pergamon, and after 133 BC fell under Roman control. It suffered greatly during the Mithridatic Wars, but quickly recovered under the dominion of Rome; and towards the end of the Roman Republic and under the first emperors, Laodicea, benefiting from its advantageous position on a trade route, became one of the most important and flourishing commercial cities of Asia Minor, in which large money transactions and an extensive trade in black wool were carried on.

The place often suffered from earthquakes, especially from the great shock in the reign of Nero (60 AD), in which it was completely destroyed. But the inhabitants declined imperial assistance to rebuild the city and restored it from their own means. The wealth of its inhabitants created among them a taste for the arts of the Greeks, as is manifest from its ruins; and that it did not remain behind in science and literature is attested by the names of the sceptics Antiochus and Theiodas, the successors of Aenesidemus and by the existence of a great medical school. Its wealthy citizens embellished Laodicea with beautiful monuments. One of the chief of them, Polemon, became King of Armenian Pontus – called after him "Polemoniacus" – and of the coast round Trebizond. The city minted its own coins, the inscriptions of which show evidence of the worship of Zeus, Æsculapius, Apollo, and the emperors.

It received from Rome the title of free city. During the Roman period Laodicea was the chief city of a Roman conventus, which comprised twenty-four cities besides itself; Cicero records holding assizes there ca. 50 BC.

Antiochus the Great transported 2000 Jewish families to Phrygia from Babylonia . Many of Laodicea's inhabitants were Jews, and Cicero records that Flaccus confiscated the considerable sum of 9 kg of gold which was being sent annually to Jerusalem for the Temple (Pro Flacco 28-68).

The Byzantine writers often mention it, especially in the time of the Comneni. In 1119 Emperor John the Beautiful and his lead military aid John Axuch captured Laodicea from the Seljuk Turks in the first major military victory of his reign.

It was fortified by the emperor Manuel Comnenus. The city was destroyed during the invasions of the Turks and Mongols.

It was probably owing to its large Jewish community, that at a very early period it became one of the chief seats of Christianity, and the see of a bishop. Laodicea receives passing mention in the epistle to the Colossians and is one of the Seven churches of Asia mentioned in the Book of Revelation. The Laodicean Church had probably been founded by the Colossian Epaphras, who shared the care of it with Nymphas, in whose house the faithful used to assemble. Paul asks the Colossians to communicate to the Church of Laodicea the letter which he sends to them, and to read publicly that which should come to them from Laodicea, that is, no doubt, a letter which he had written, or was to write, to the Laodiceans. An apocryphal epistle purporting to be from Paul to the Laodiceans is extant in Latin and Arabic (see Epistle to the Laodiceans). Some of the Greek manuscripts end the First Epistle to Timothy with these words: "Written at Laodicea, metropolis of Phrygia Pacatiana".

The first bishops attributed to the See of Laodicea are very uncertain: St. Archippus (Colossians 4:17); St. Nymphas; Diotrephes (III John, 9). Next comes St. Sagaris, martyr (c. 166). Sisinnius is mentioned in the Acts of the martyr St. Artemon, a priest of his Church. Nunechius assisted at the Council of Nicaea (325). Eugenius, known by an inscription, was probably his successor. The Arian Cecropius was transferred by Constantius to the See of Nicomedia. When Phrygia was divided into two parts, Laodicea became the metropolis of Phrygia Pacatiana: it figures under this title in all the Notitiae Episcopatuum. Some twenty incumbents are known besides those already enumerated; the last occupied the see in 1450. The city remains a titular see of the Roman Catholic Church, Laodicensis in Phrygia; the seat has been vacant since 1968. [1]

There are extant, in Greek, sixty canons of a Council of Laodicea. That this assembly was actually held, we have the testimony of Theodoret. There has been much discussion as to the date: some have even thought that the council must have preceded that of Nicaea (325), or at least that of Constantinople (381). It seems safer to consider it as subsequent to the latter. The canons are, undoubtedly, only a resume of an older text, and indeed appear to be derived from two distinct collections. They are of great importance in the history of discipline and liturgy; some Protestants have invoked one of them in opposition to the veneration of angels.

The existing remains still attest its former greatness. The ruins near Denizli (Denisli) are relatively well preserved. Its stadium, gymnasium, and theatres (one of which is in a state of great preservation, with its seats still perfectly horizontal, though merely laid upon the gravel), are well deserving of notice. Other buildings, also, on the top of the hill, are full of interest; and on the east the line of the ancient wall may be distinctly traced, with the remains of a gateway; there is also a street within and without the town, flanked by the ruins of a colonnade and numerous pedestals, leading to a confused heap of fallen ruins on the brow of the hill, about 200 meters outside the walls. North of the town, towards the Lycus, are many sarcophagi, with their covers lying near them, partly imbedded in the ground, and all having been long since rifled. Amongst other interesting objects are the remains of an aqueduct, commencing near the summit of a low hill to the south, whence it is carried on arches of small square stones to the edge of the hill. The water must have been much charged with calcareous matter, as several of the arches are covered with a thick incrustation. From this hill the aqueduct crossed a valley before it reached the town, but, instead of being carried over it on lofty arches, as was the usual practice of the Romans, the water was conveyed down the hill in stone barrel-pipes; some of these also are much incrusted, and some completely choked up. It traversed the plain in pipes of the same kind. The aqueduct appears to have been destroyed by an earthquake, as the remaining arches lean bodily on one side, without being much broken.

The stadium, which is in a good state of preservation, is near the southern extremity of the city. The seats, almost perfect, are arranged along two sides of a narrow valley, which appears to have been taken advantage of for this purpose, and to have been closed up at both ends. Towards the west are considerable remains of a subterranean passage, by which chariots and horses were admitted into the arena, with a long inscription over the entrance. The whole area of the ancient city is covered with ruined buildings, and one could distinguish the sites of several temples, with the bases of the columns still in situ. The ruins bear the stamp of Roman extravagance and luxury, rather than of the stern and massive solidity of the Greeks. Strabo attributes the celebrity of the place to the fertility of the soil and the wealth of some of its inhabitants: amongst whom Hiero, having adorned the city with many beautiful buildings, bequeathed to it more than 2000 talents at his death.

Pamukkale, meaning 'cotton castle' in Turkish, is a natural site and

Hacilar is an early human settlement in southwestern Turkey, 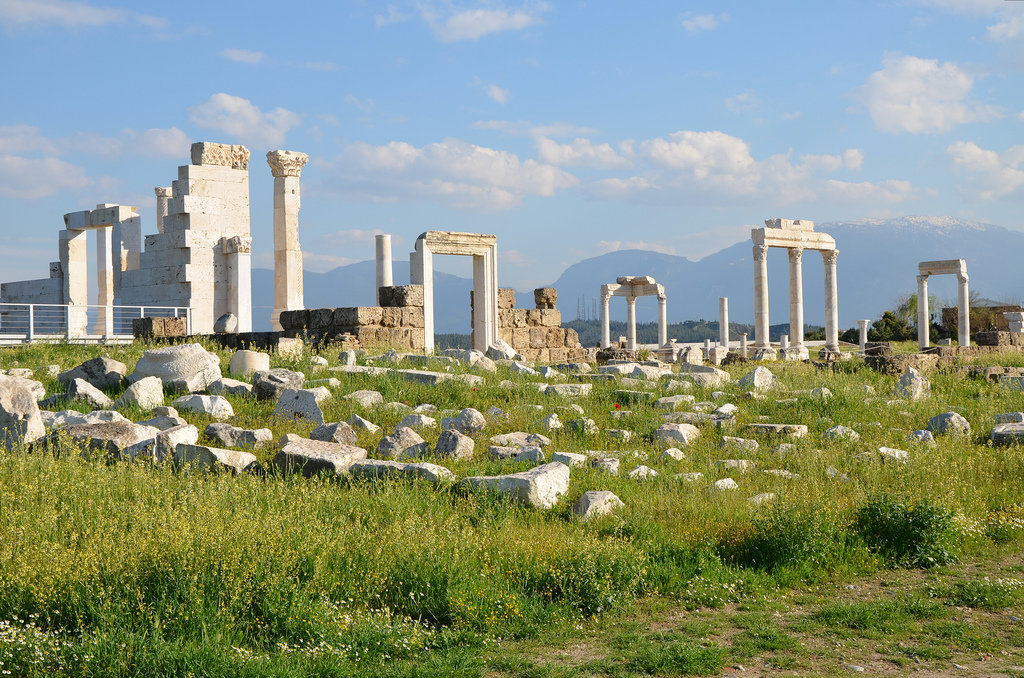 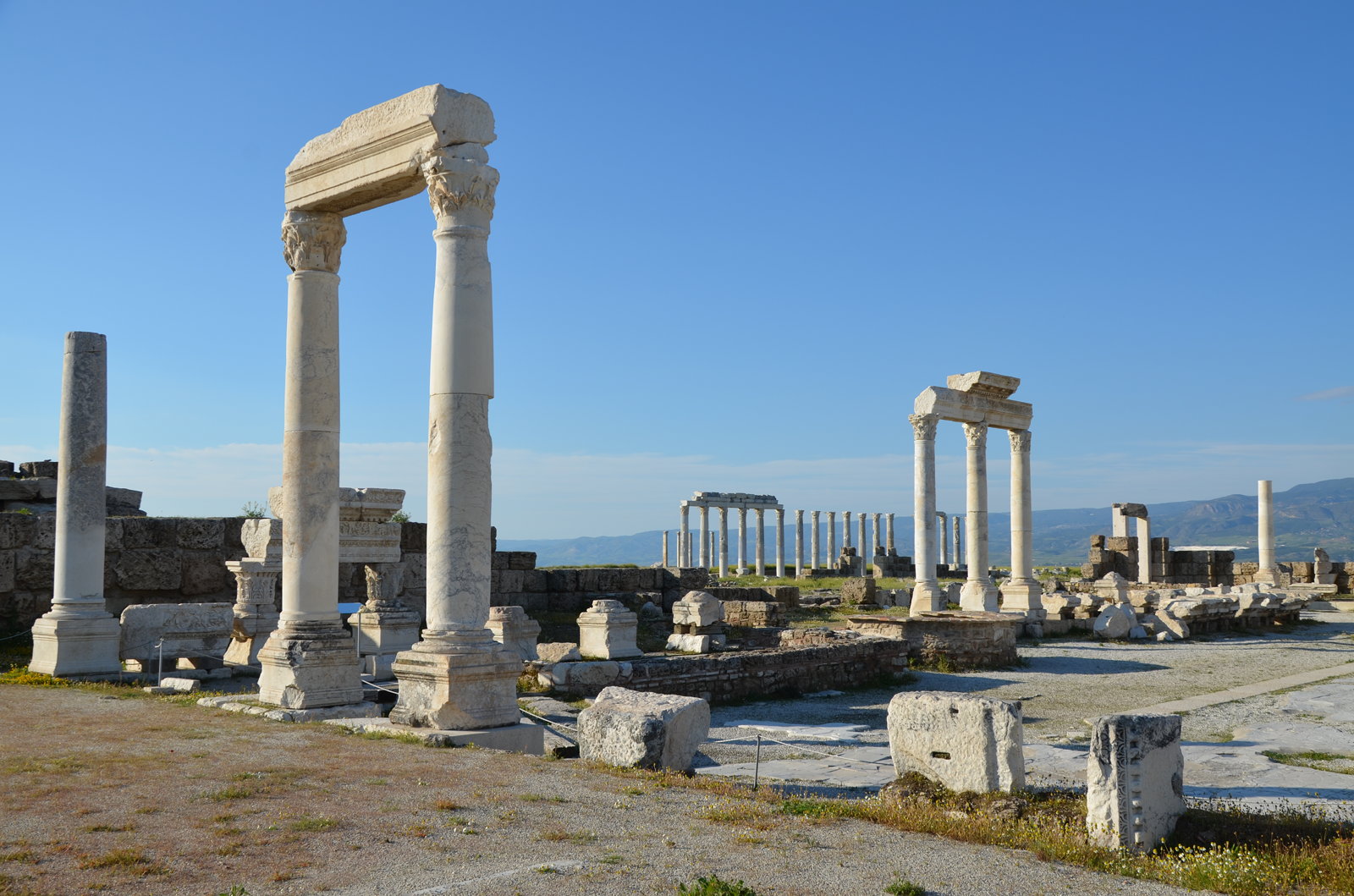 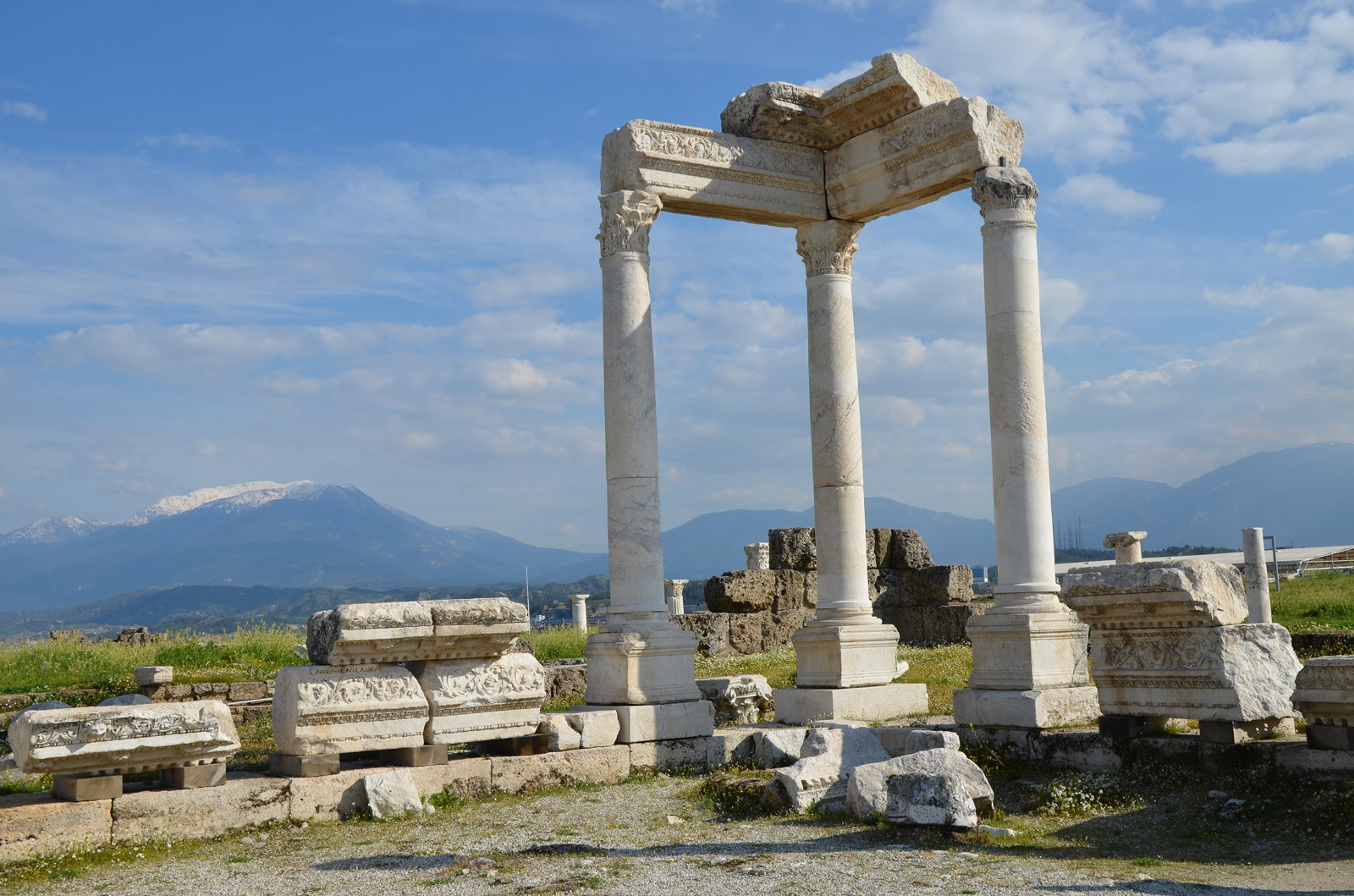 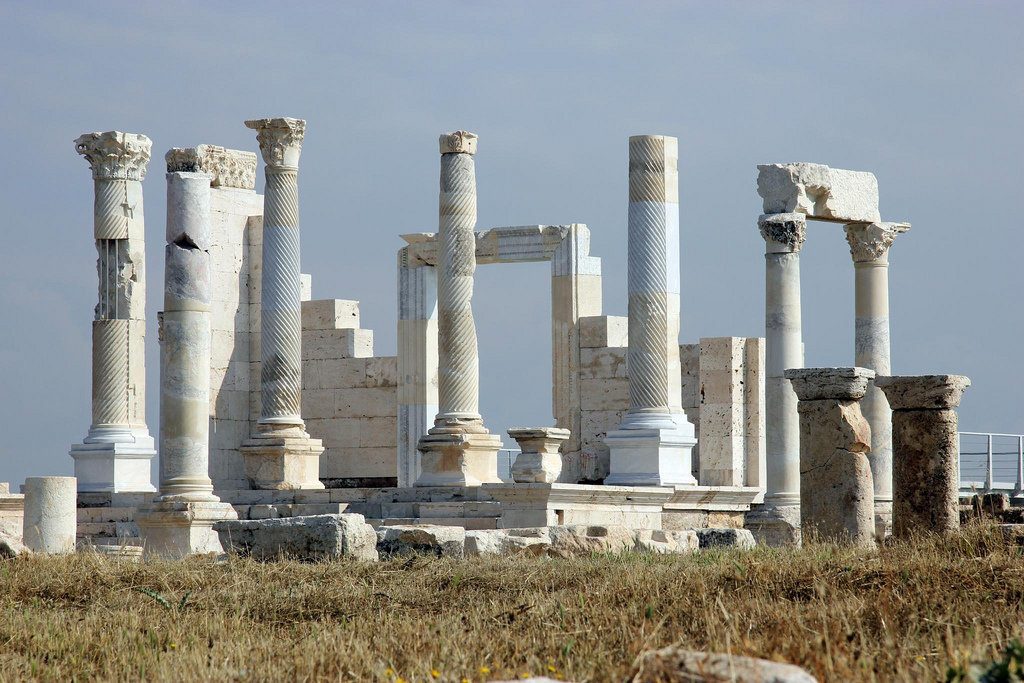 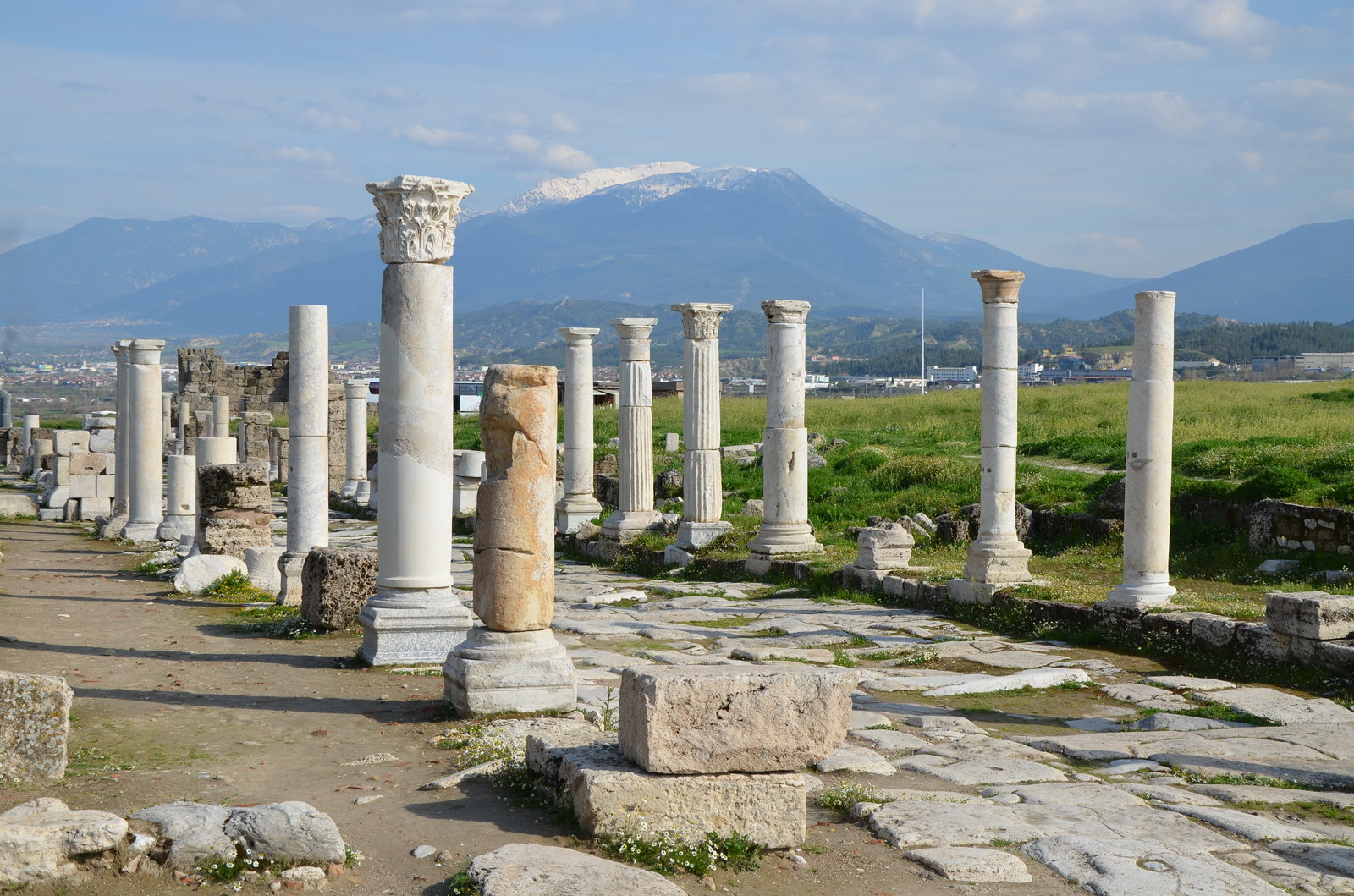 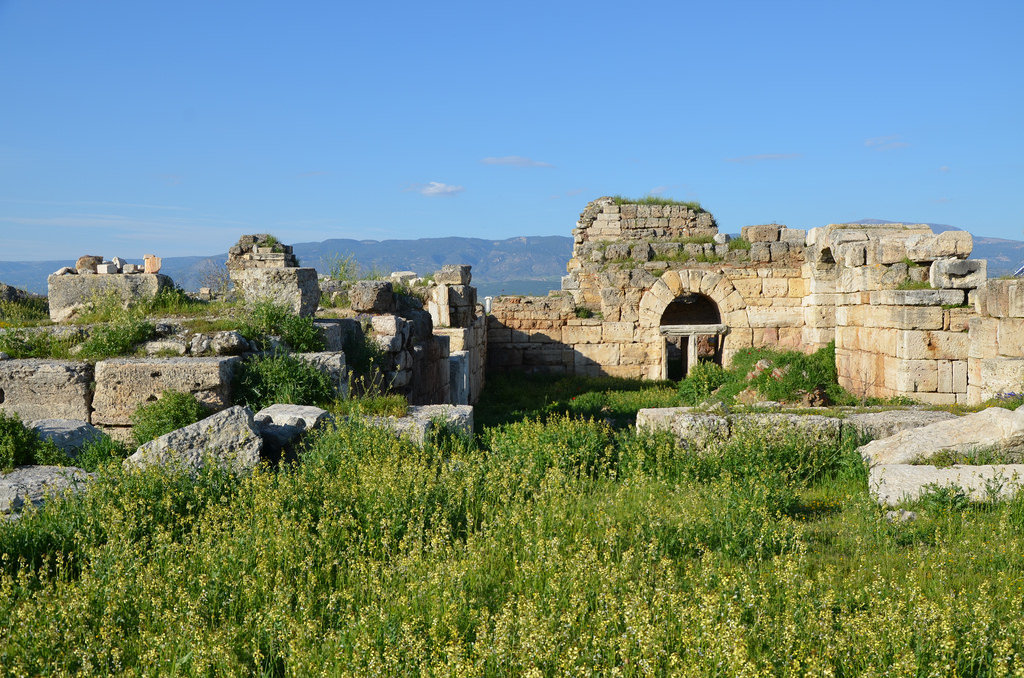 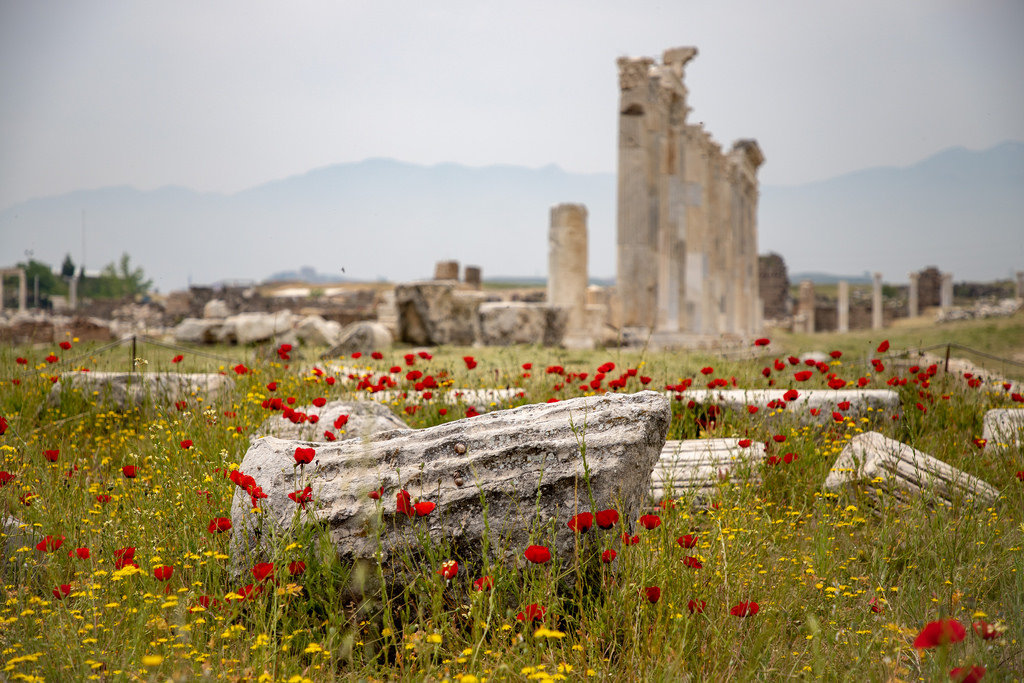 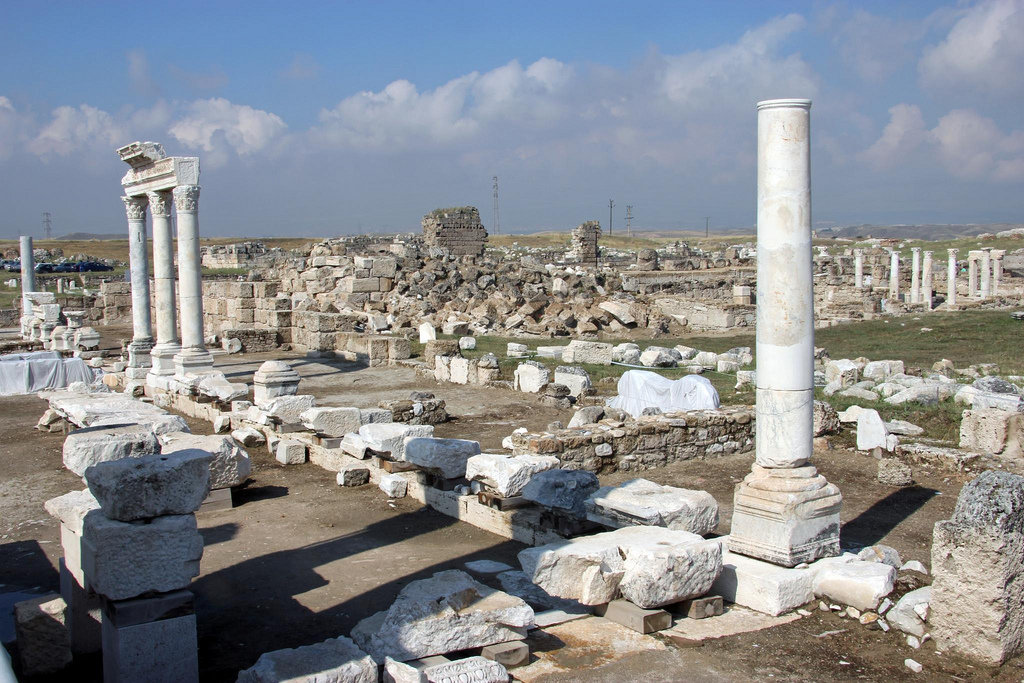 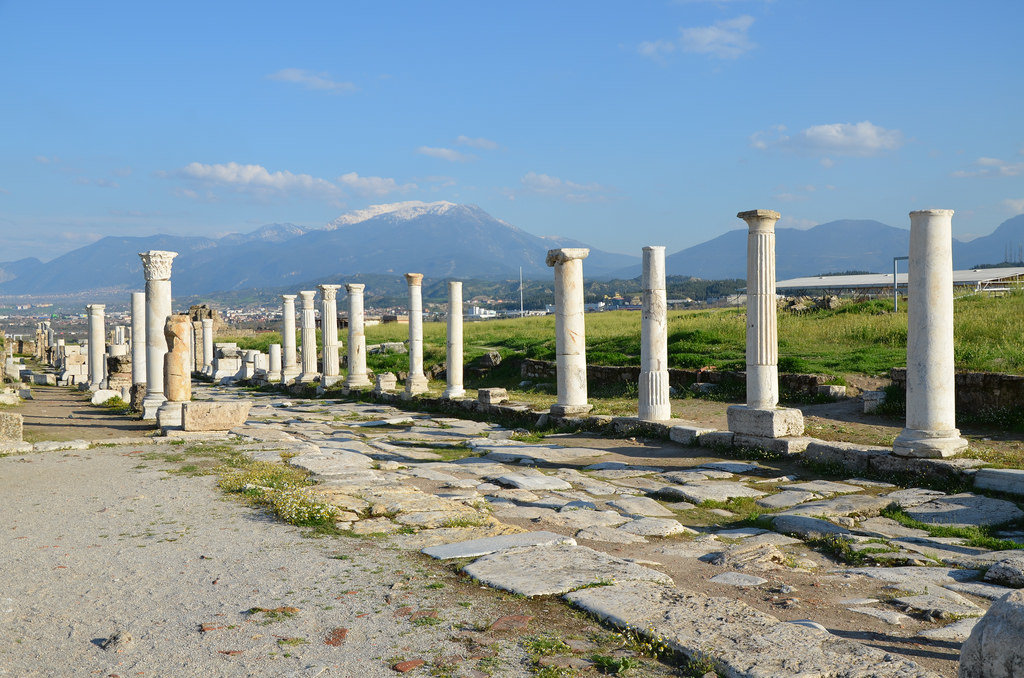 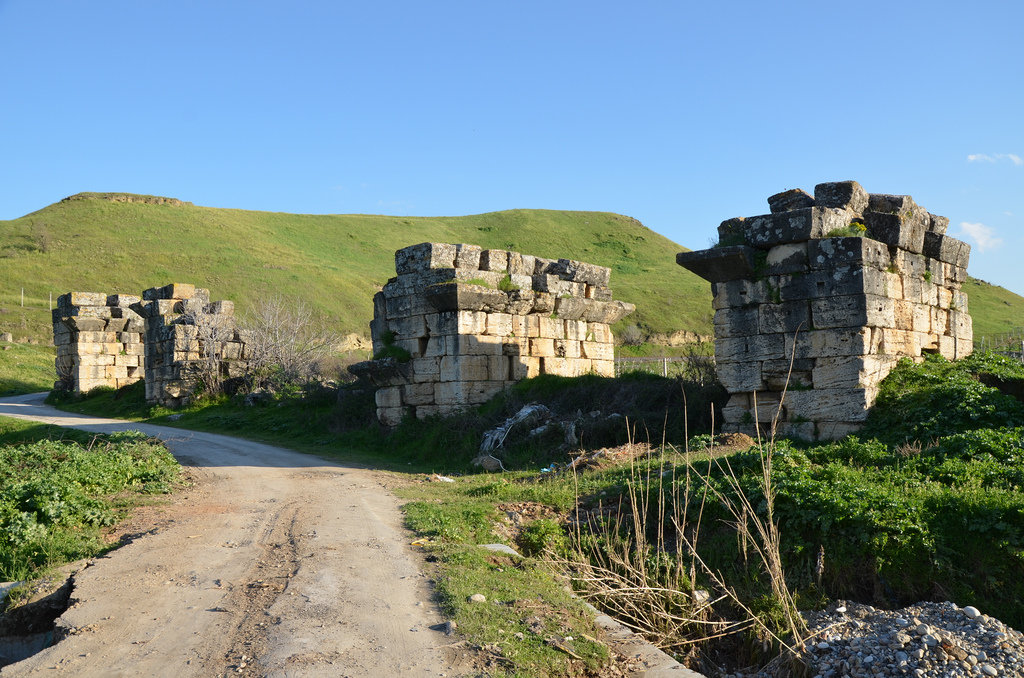 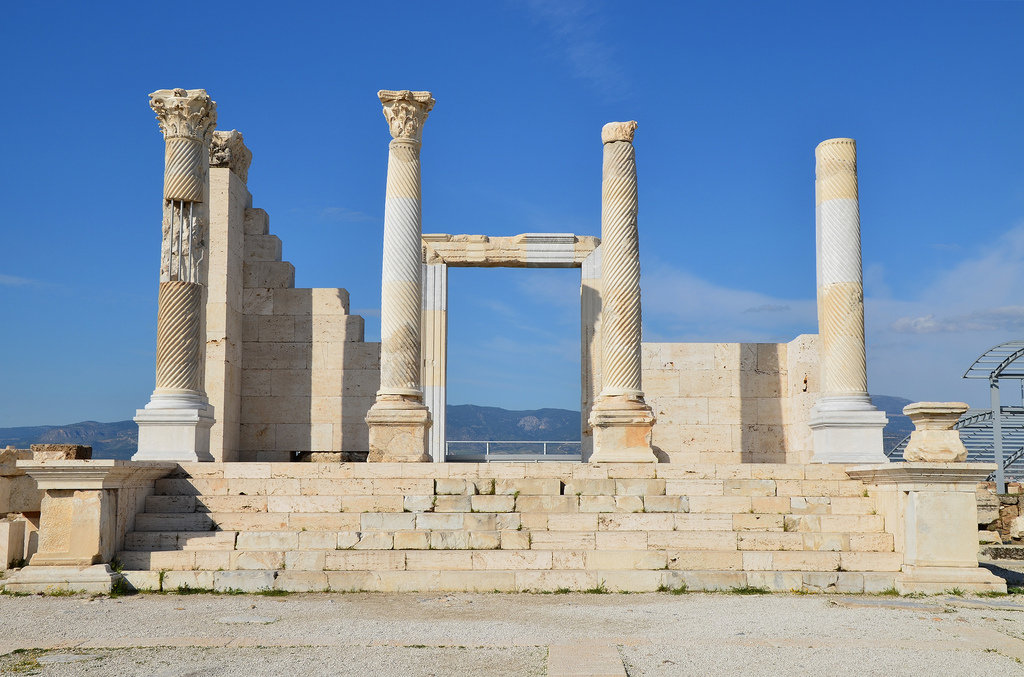 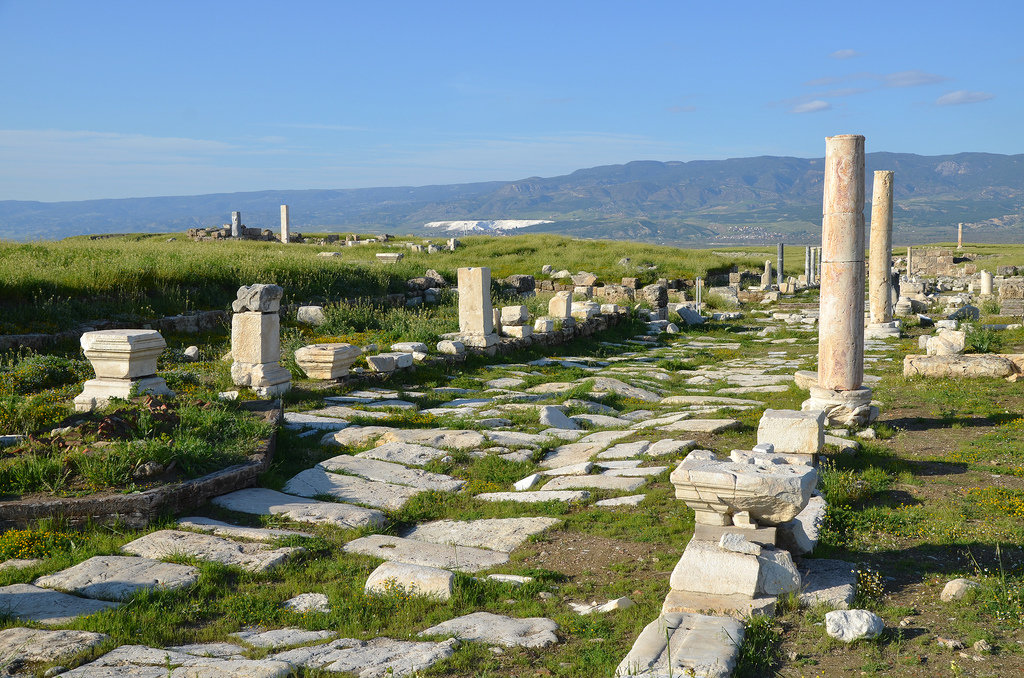 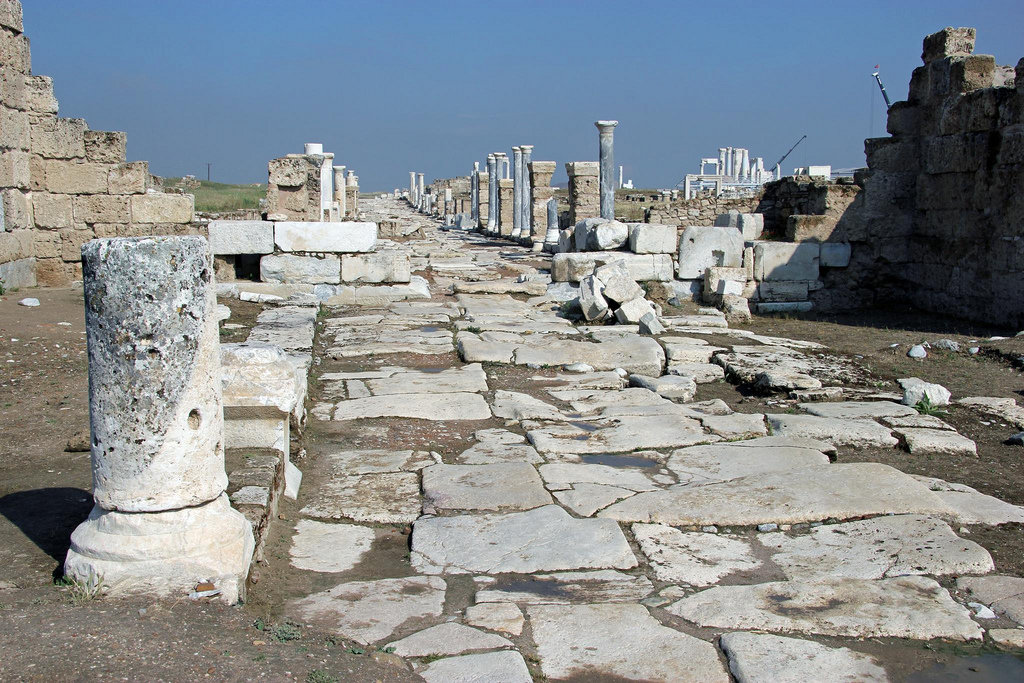 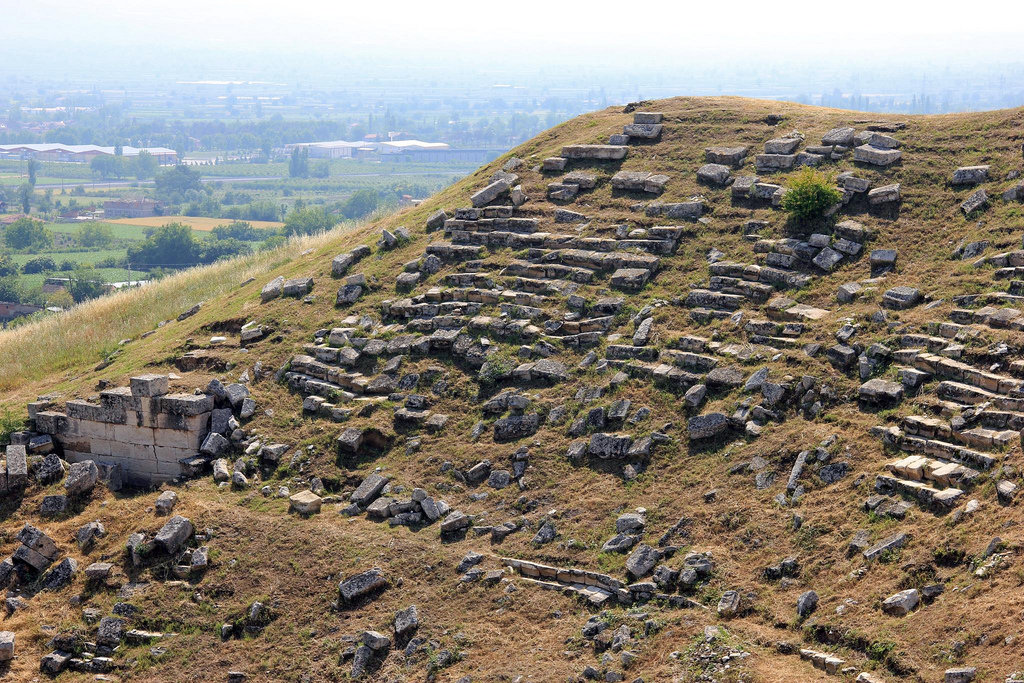 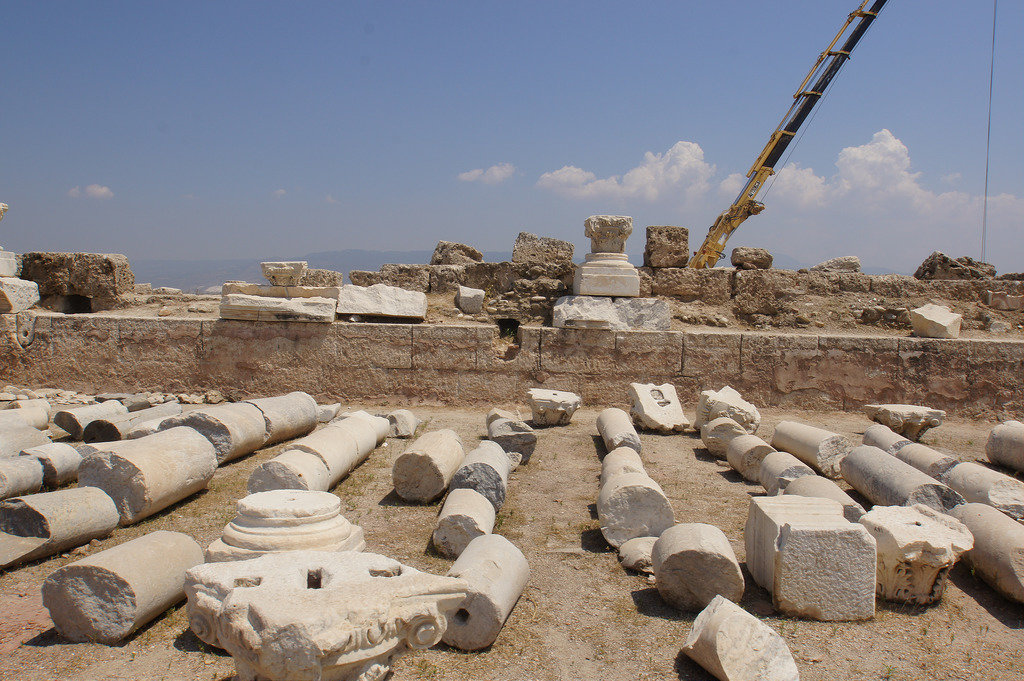 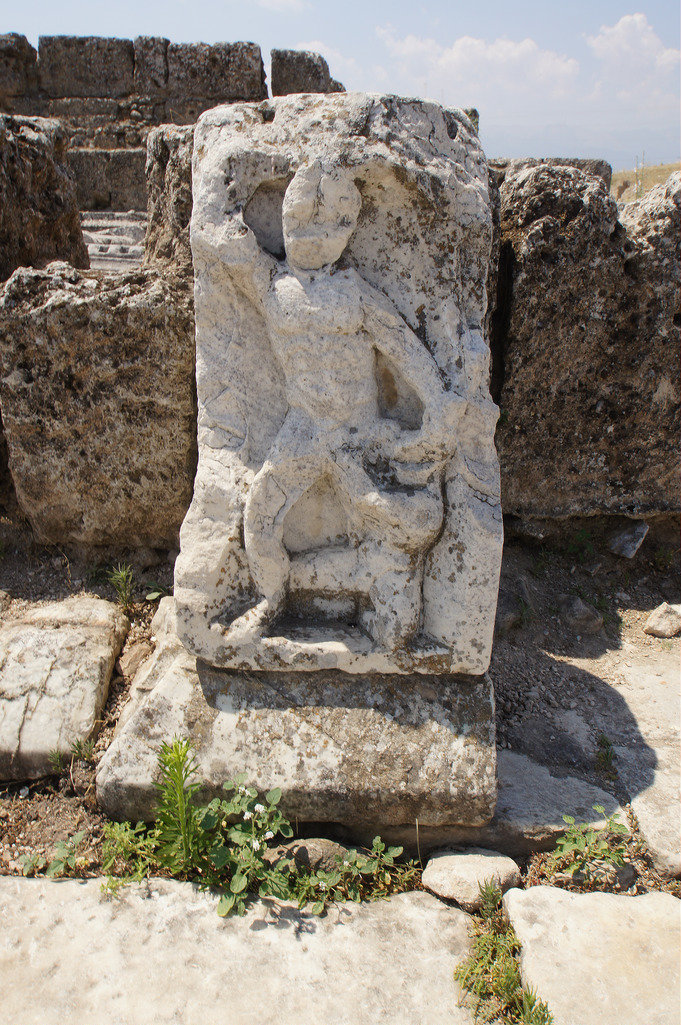 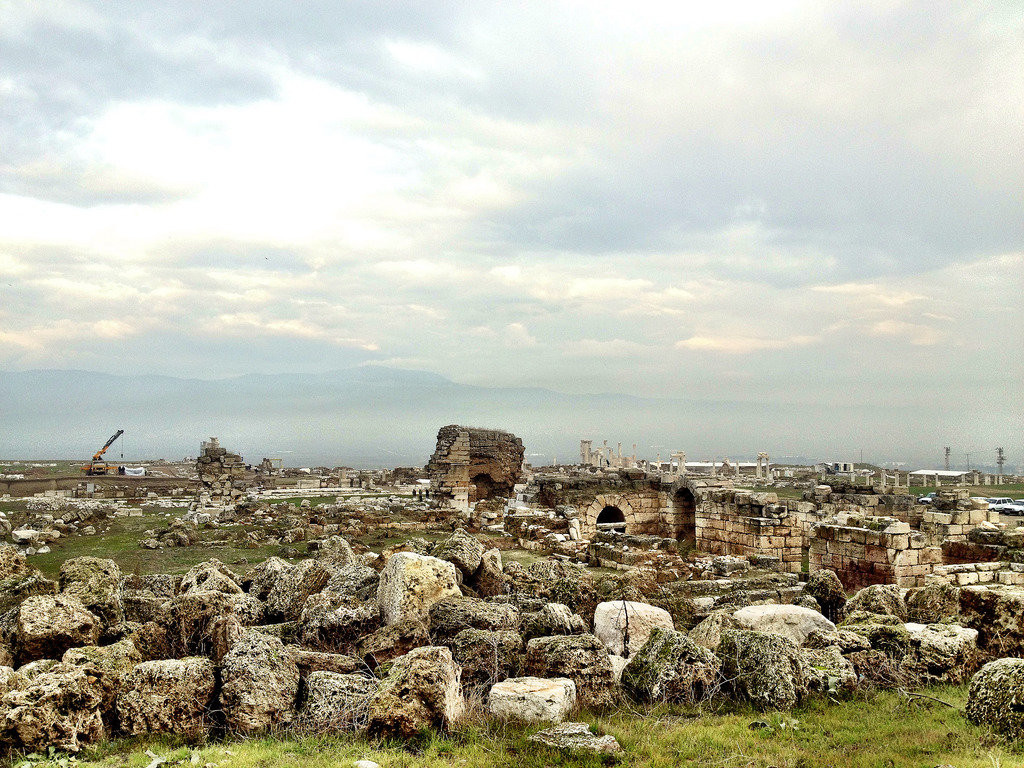 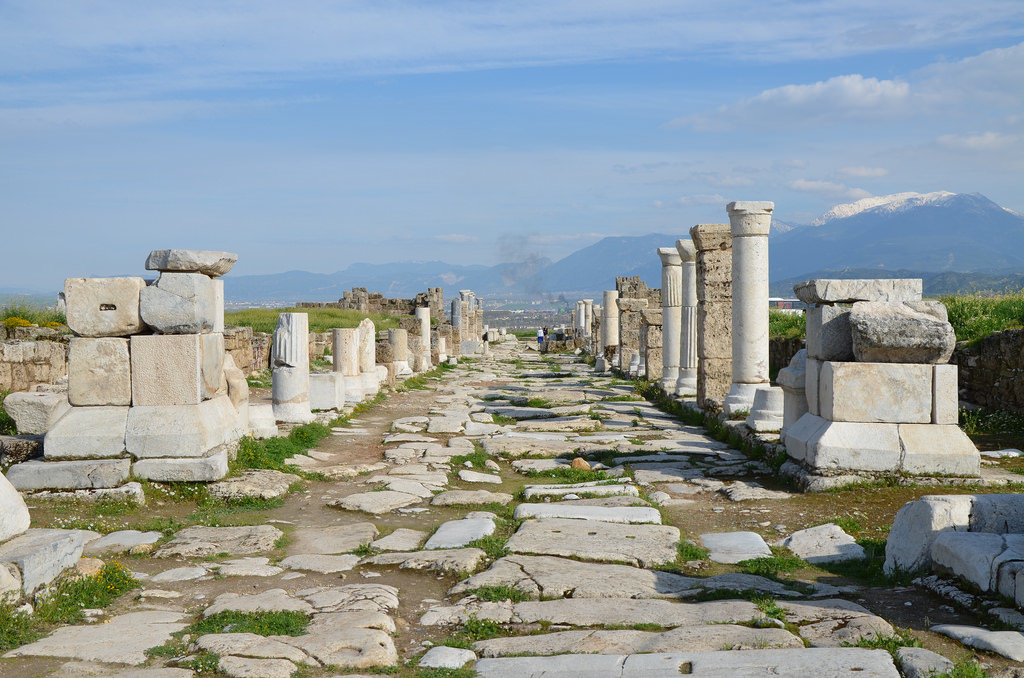 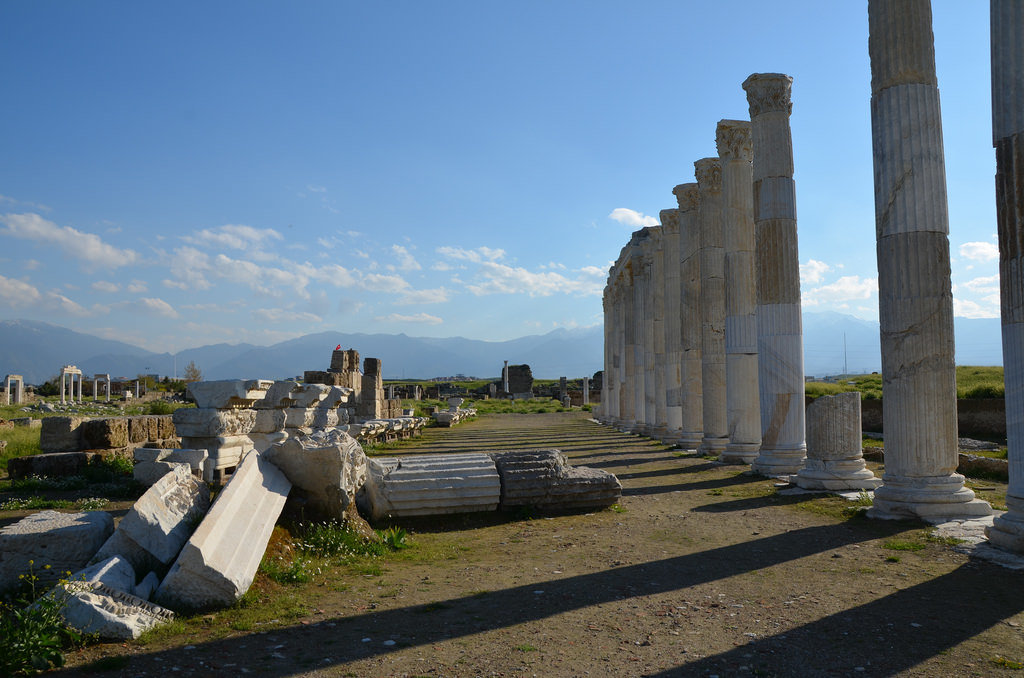 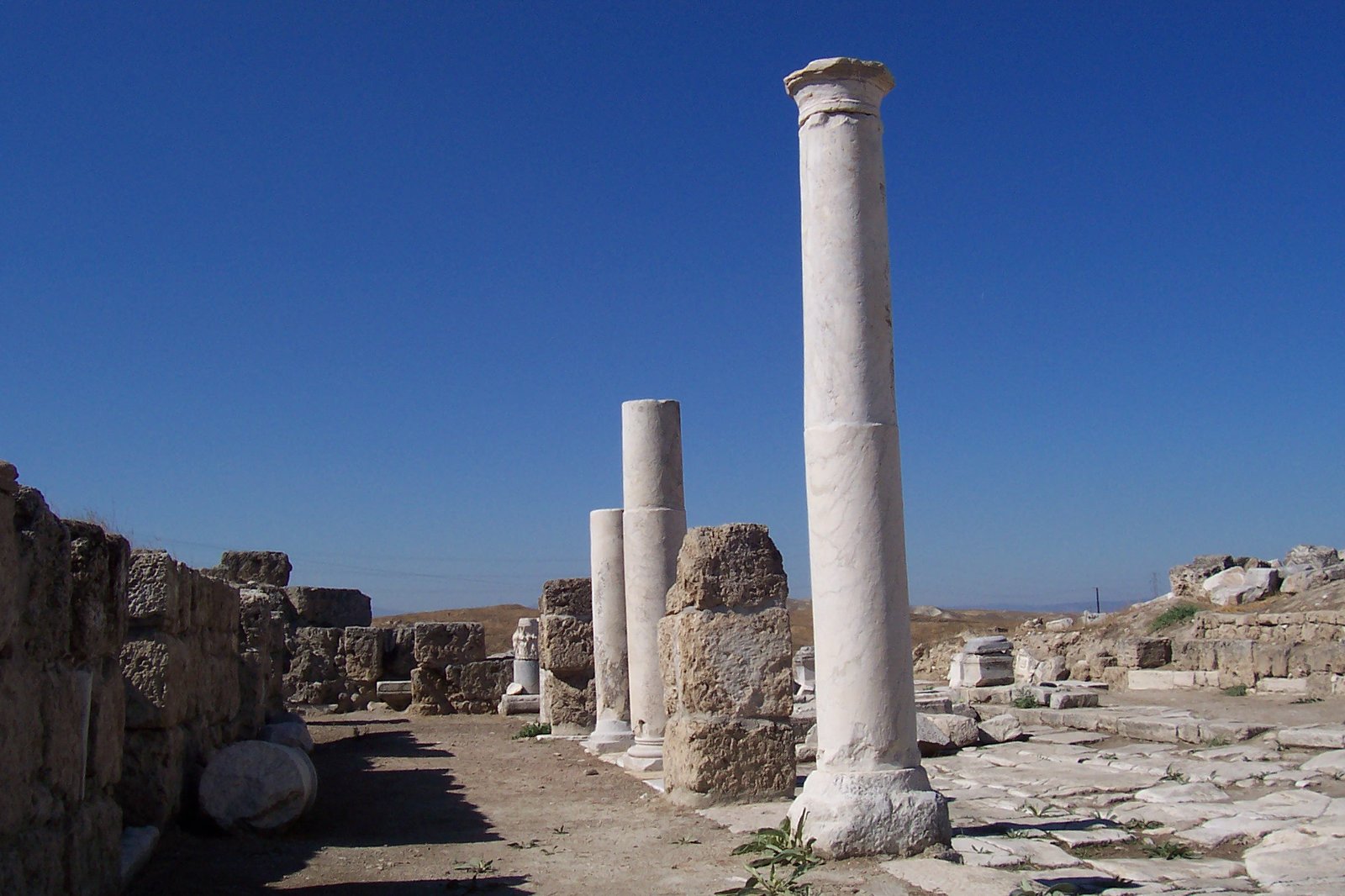 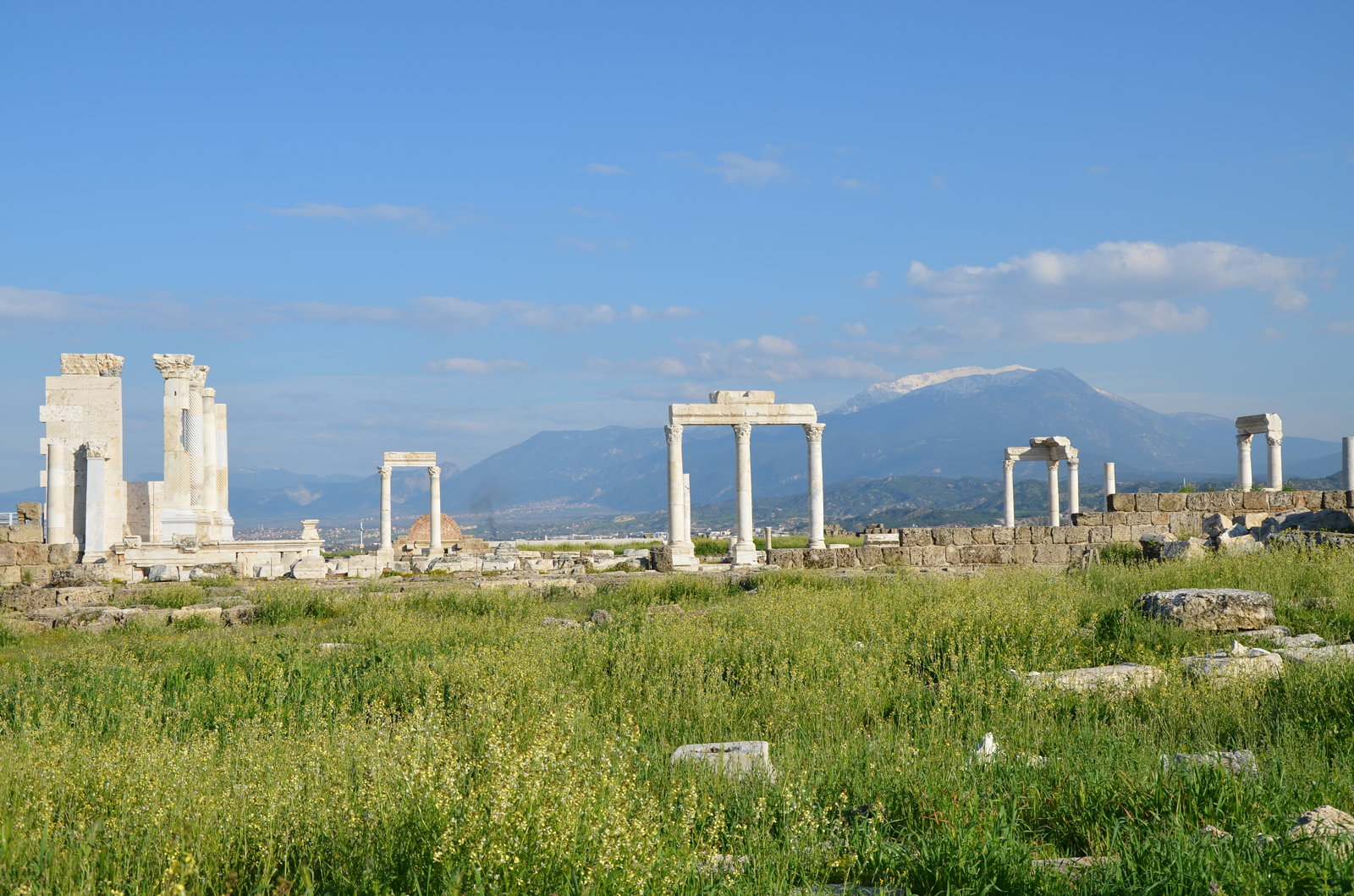