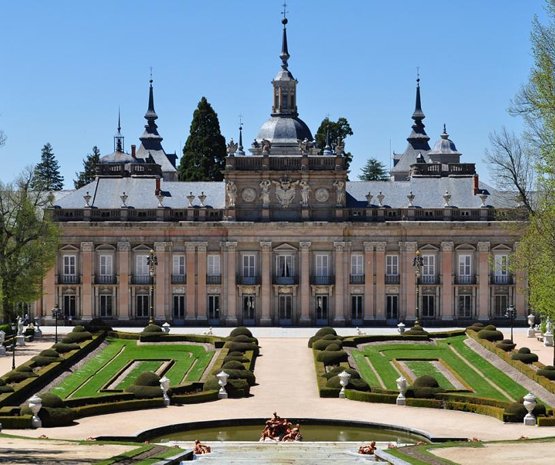 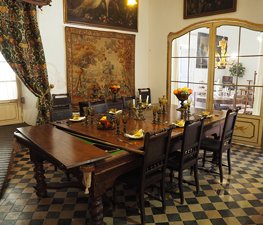 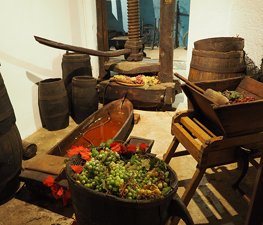 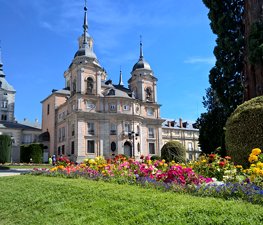 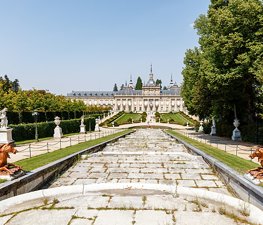 The Royal Palace of La Granja de San Ildefonso is an 18th century palace in in the small town of San Ildefonso in the hills near Segovia, 80 km north of Madrid, central Spain, formerly the summer residence of the Kings of Spain since the reign of Philip V. The palace is in a restrained baroque style surrounded by extensive gardens in the French manner and sculptural fountains. It is now open to the public as a museum.

Due to their location on the forested northern slopes of the Sierra de Guadarrama, these were favourite hunting grounds for many Castilian kings. In the fifteenth century, Henry IV of Castile built the first hunting lodge on the site, along with a small shrine dedicated to San Ildefonso (Saint Ildefonsus), which gave this place its first name.

Isabella I of Castile granted both buildings to the monks of the Parral monastery in Segovia, who built a granja (farm) and an almshouse alongside. Royal Palace of La Granja de San Ildefonso.

The site was purchased from the monks in 1719 by Philip V, after his summer palace nearby at Valsain burned to a shell. Beginning in 1721, Philip began building a new palace and gardens modelled on Versailles, built by his grandfather, Louis XIV of France. Like Versailles it embraced a cour d'honneur on the approaching side, and formal gardens, with a main axis centered on the palace, that were surrounded by woodland in which further hidden garden features were disposed. Like Versailles, La Granja began as a retreat from the court but became a center of royal government.

For the architect, Philip began with an unpretentious project by the Spanish architect Teodoro Ardemans, incorporating a chapel centered on one facade, which was enlarged in a second phase, ca 1728-34 under Andrea Procaccini and Sempronio Subisati, who provided the courtyards in the flanks, then given its definitive character by Filippo Juvarra, who was brought from Turin, based on recommendations in the circle of Philip's second queen, Elizabeth Farnese of Parma, and his assistant, Giovanni Battista Sacchetti.

When the King decided to abdicate in 1724, his intention was to retire to La Granja. Unfortunately Philip's heir, King Louis I, died that same year, and Philip had to return to the throne. Consequently, a place designed for leisure and quiet retreat thus became an important meeting place for the King, his ministers and the court. The town of San Ildefonso expanded to provide housing and services to the courtiers who wanted a place near the king's favourite residence. Military barracks, a collegiate church (1721-1724, built to designs of Teodoro Ardemans, and dedicated to the Holy Trinity, 22 December 1723), and even a royal glass factory (1728) were built to provide for the palace. The glass factory, which had some initial successes from 1720 at Nuevo Baztan in the province of Madrid, was moved under the direction of its Catalan foreman, Ventura Sit, to San Ildefonso, where supplies of timber were plentiful, and a royal patron was near. The best glass of Venetian type produced in the works dates from the last quarter of the eighteenth century. As La Granja de San Ildefonso, the glassworks continue today as a subsidiary of Saint Gobain.

The church was selected as his burial site by Philip, marking a break with his Habsburg predecessors. The frescoes by Giambattista Tiepolo, completed by Francisco Bayeu, were badly damaged in a fire of 1918.

Philip's successor Ferdinand VI bequeathed the royal site of San Ildefonso, with all it contained, to his father's second wife, Isabel Farnese. At her death in 1766 it reverted to the Crown in the person of Charles III.

For the next two hundred years, La Granja was the court's main summer palace, and many royal weddings and burials, state treaties and political events took place within its walls.

It is a popular tourist attraction, furnished with a collection of paintings, with some good po=traits, and a new and important Museum of Flemish tapestries.

Extending over 1,500 acres, the gardens around the palace are one of the best examples of 18th-century European garden design. The French designer from the official French royal offices of Robert de Cotte, René Carlier, used the natural slope from the mountains to the palace grounds both as an aid for visual perspective and as a source for sufficient head to make water shoot out of the twenty-six sculptural fountains that decorate the park. Of the elaborate "Baths of Diana", focus of several garden axes, the chronically depressed Philip remarked, "It has cost me three millions and amused me three minutes."

Sculptors arrived from Paris to execute designs on the site; they included René Frémin (1672-1744, at La Granja until 1738), to whom the execution of many vases and sculptures was attributed in eighteenth-century inventories, Jean Thierry, and others who are little more than names in archival references.

All of the fountains represent themes from classical mythology, including Greek deities, allegories and scenes from myths. They are cast in lead to prevent corrosion, and painted over to simulate bronze, a nobler material, or lacquered over white oxydised lead to imitate marble. A group of richly sculptural vases have been attributed to designs by the "dazzling maverick" Gilles-Marie Oppenord, which were probably forwarded through the offices of Robert de Cotte, overseeing French royal building projects as intendant des Bâtiments du Roi. Bruno Pons noted in the sculptural vases "an almost excessively brilliant style, quite distinct from French royal taste and showing an undeniably superior understanding of ornament".

The original waterworks and piping are still functional. They rely purely on gravity to project water up to the forty-meter height of the fountain jet of Perseus and Andromeda. An artificial lake, El Mar, "the Sea", lies secluded at the highest point of the park, and provides a reservoir and water pressure for the whole system.

Today, only a few fountains are active each day. Twice a year, on the feast days of San Fernando (Saint Ferdinand) and San Luis (Saint Louis), all twenty-six fountains are set to play, providing a memorable show. 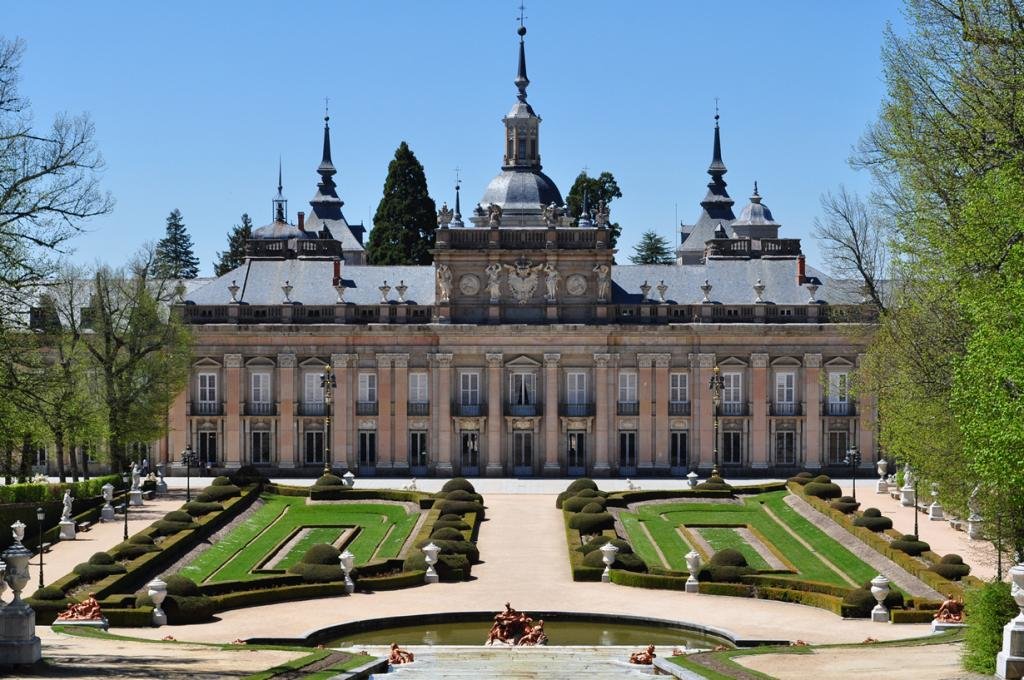 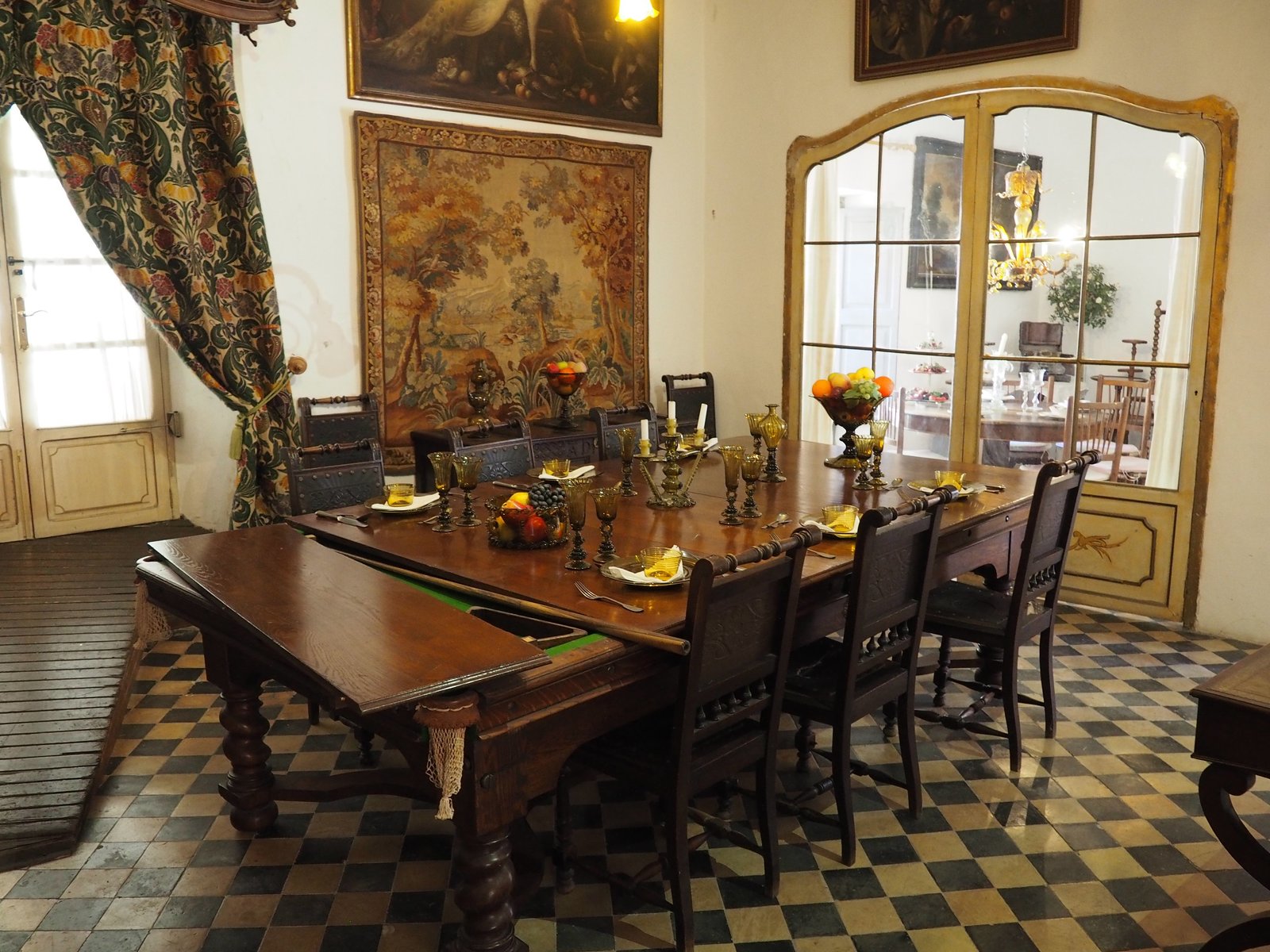 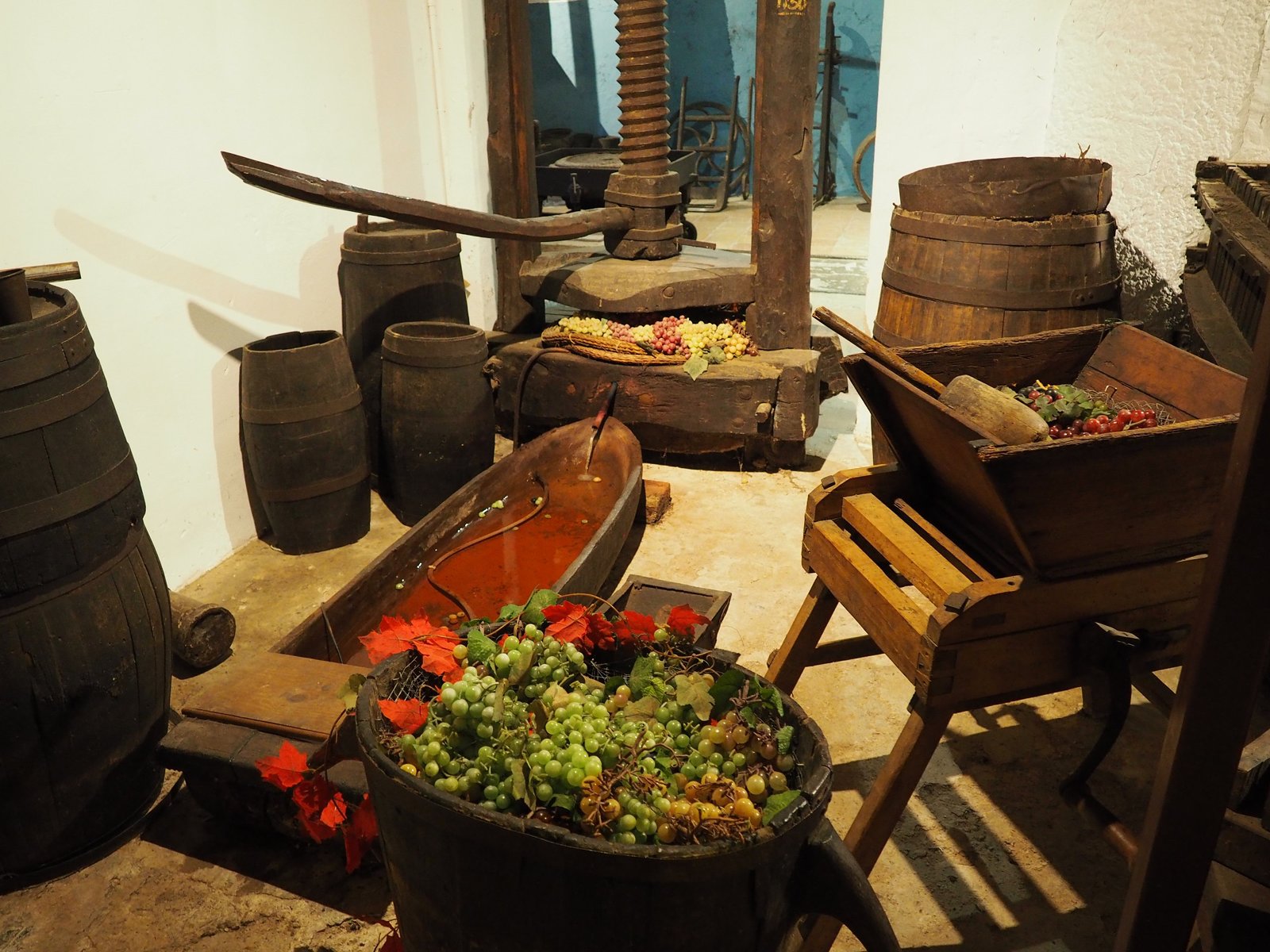 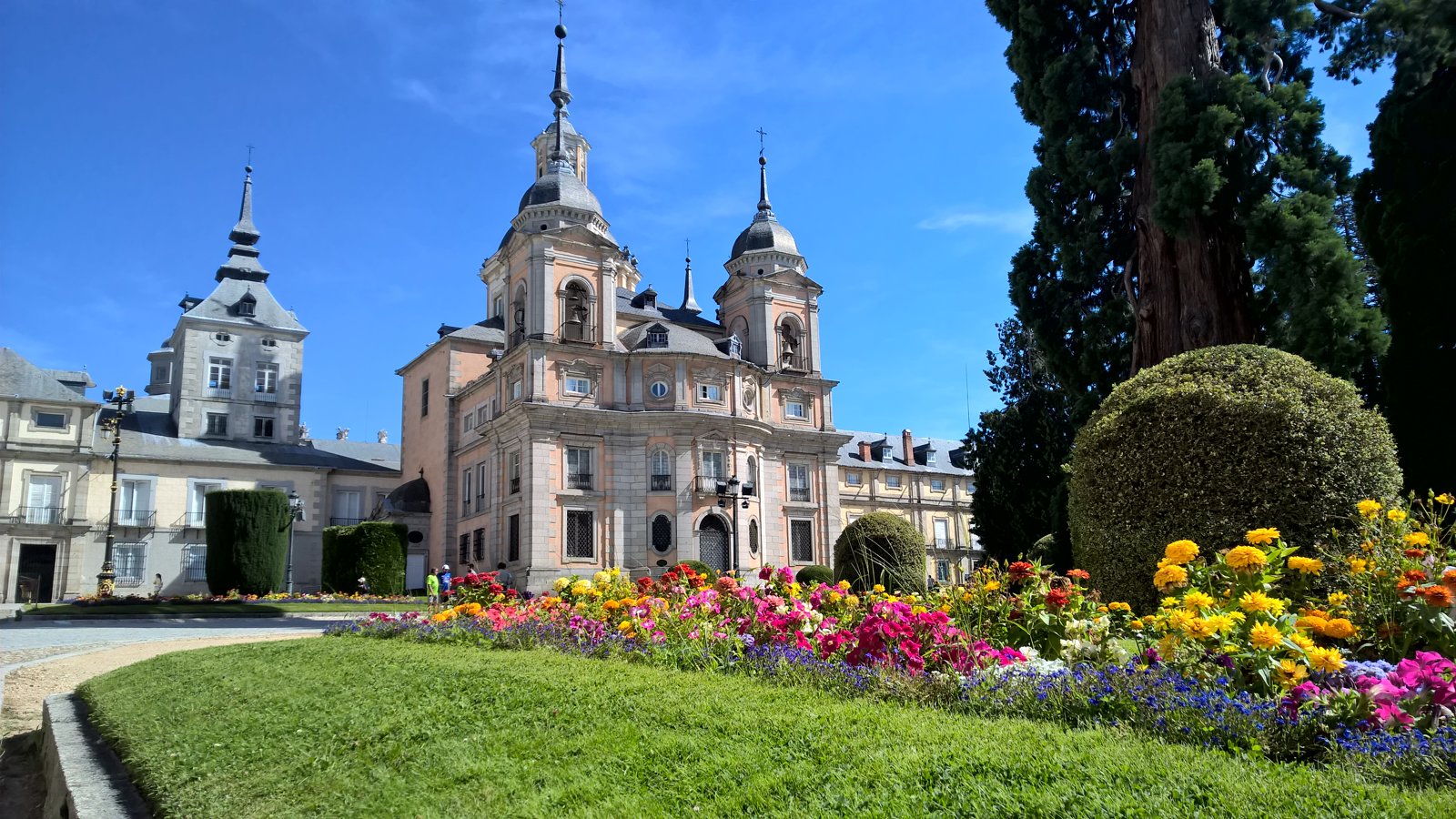 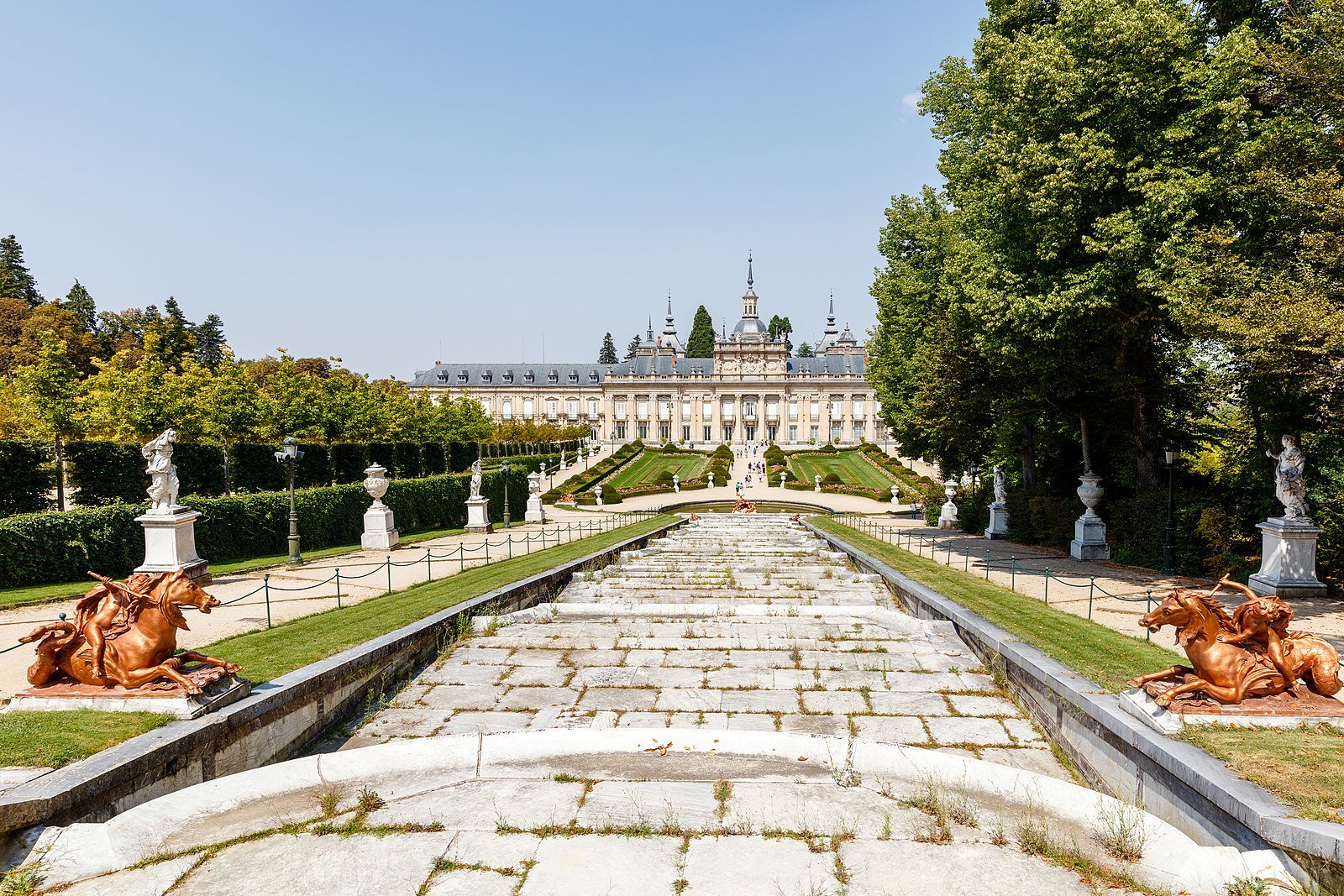 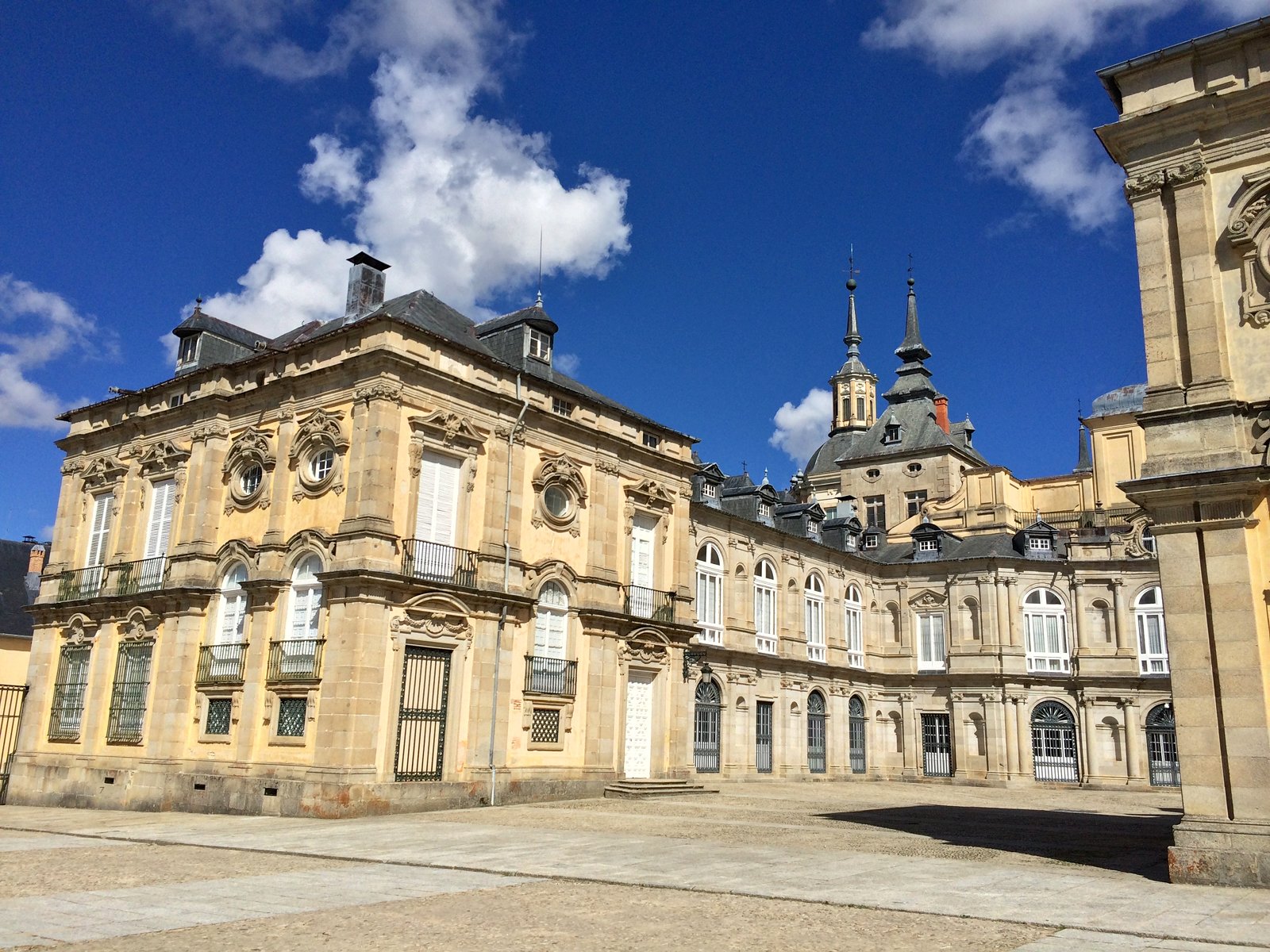 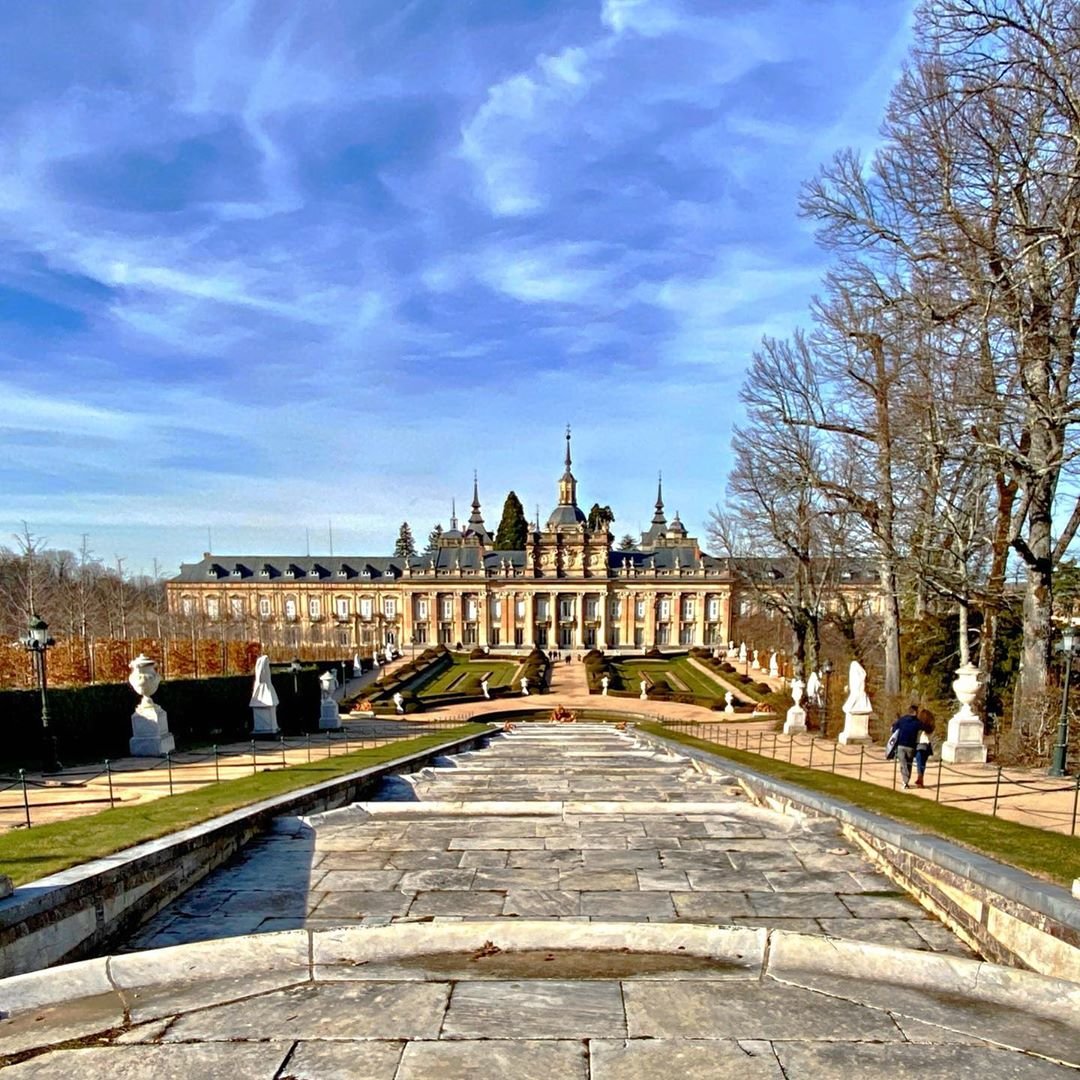 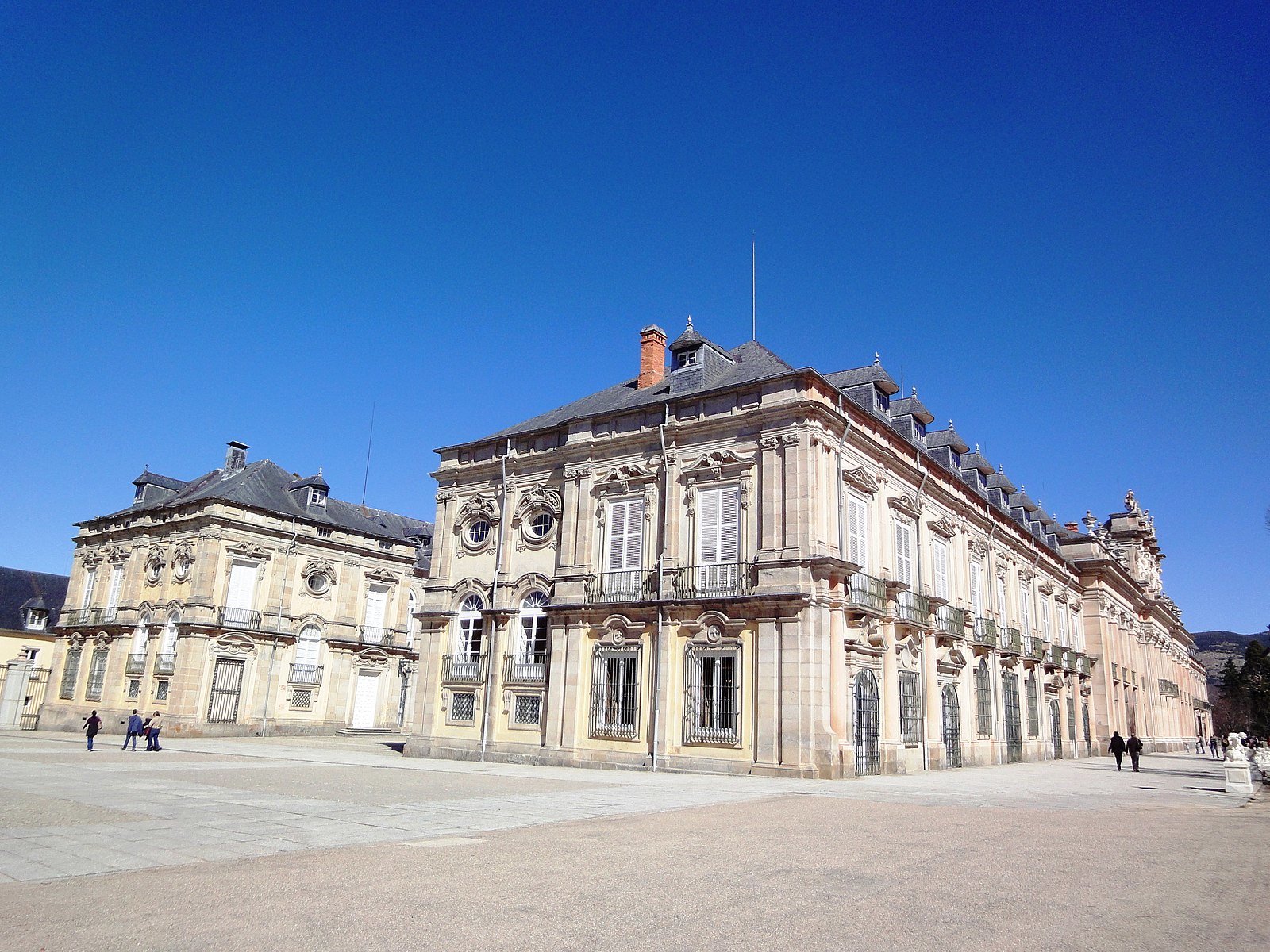 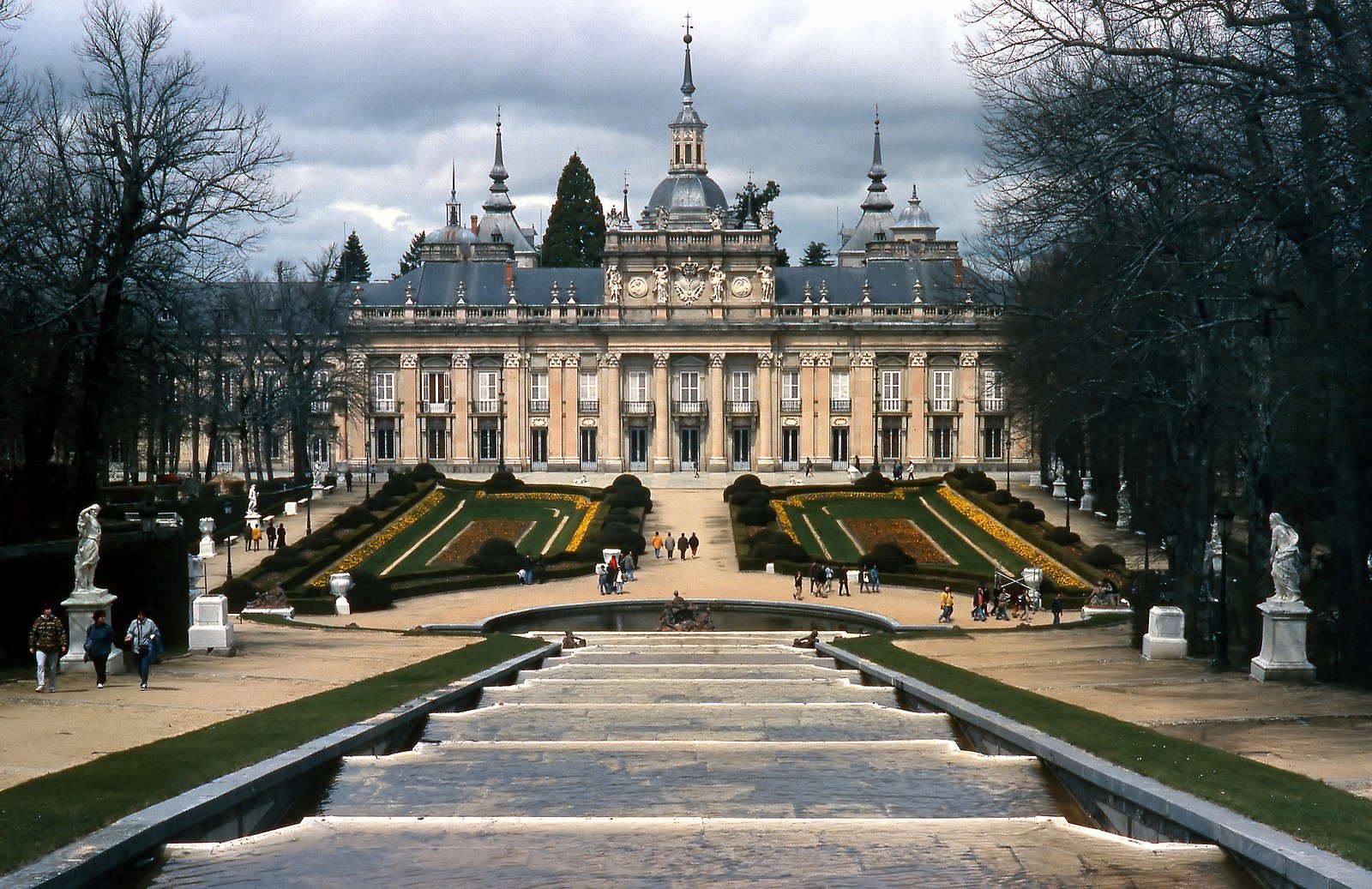 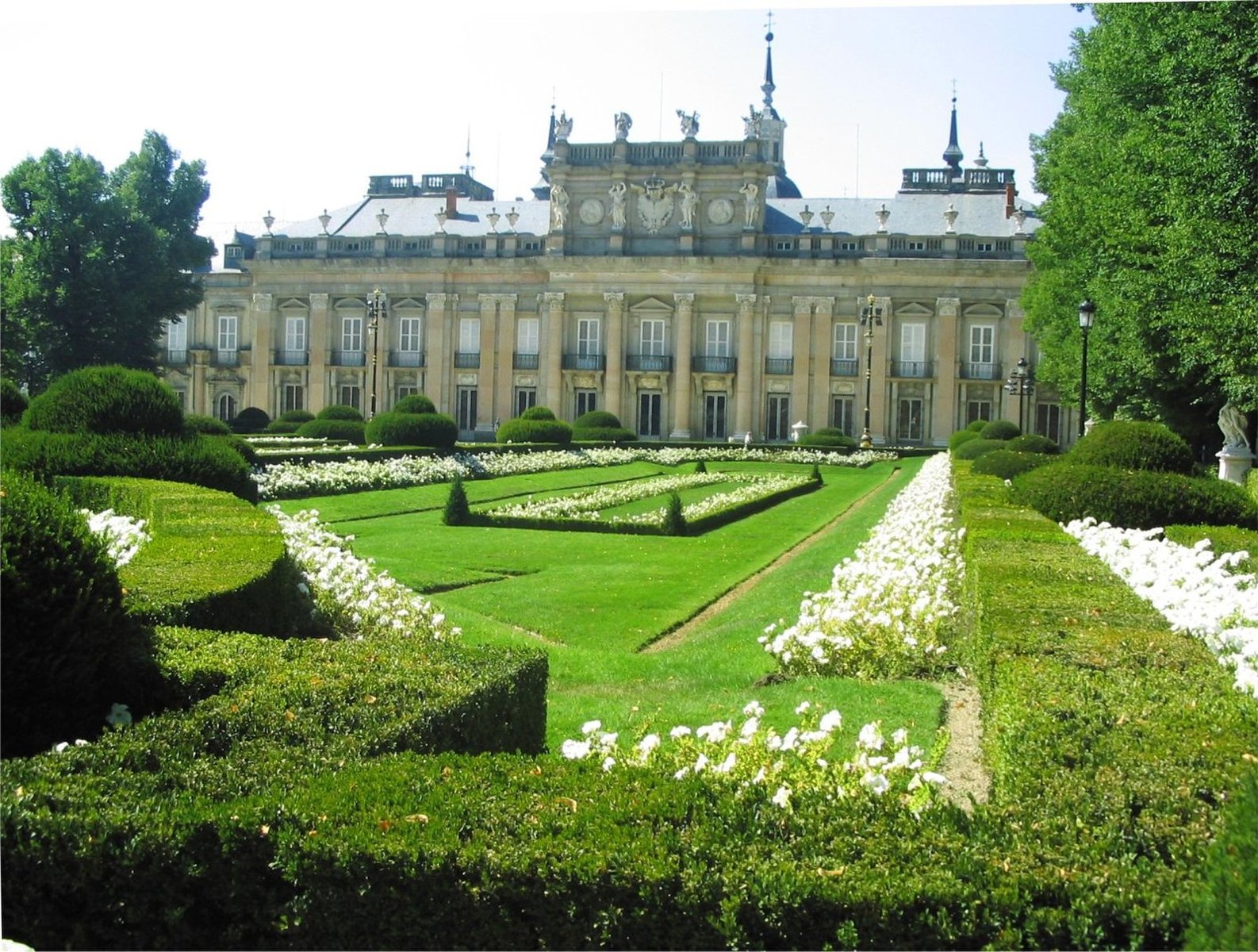 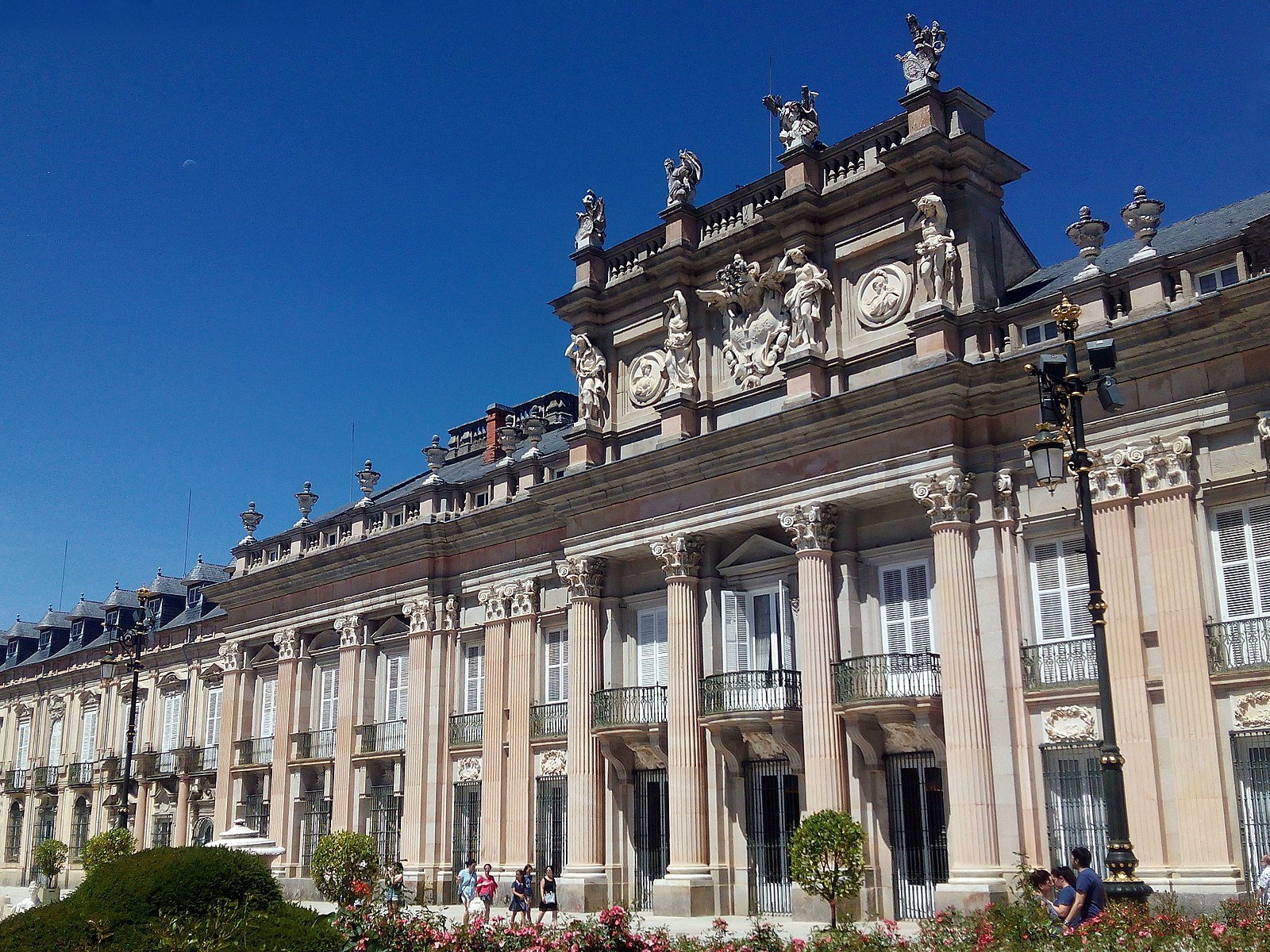 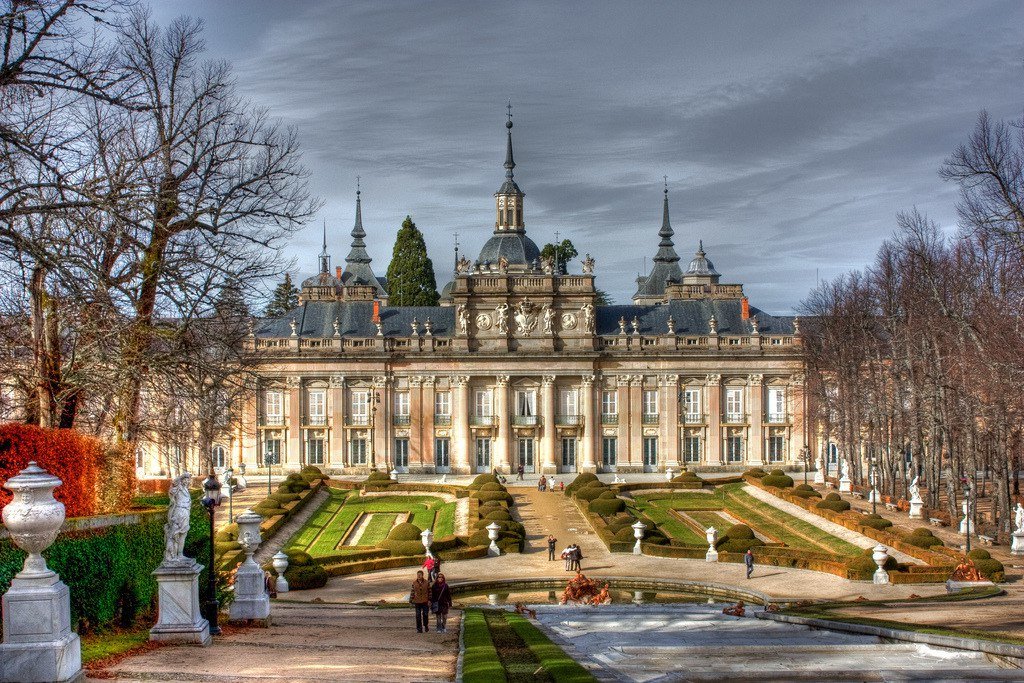 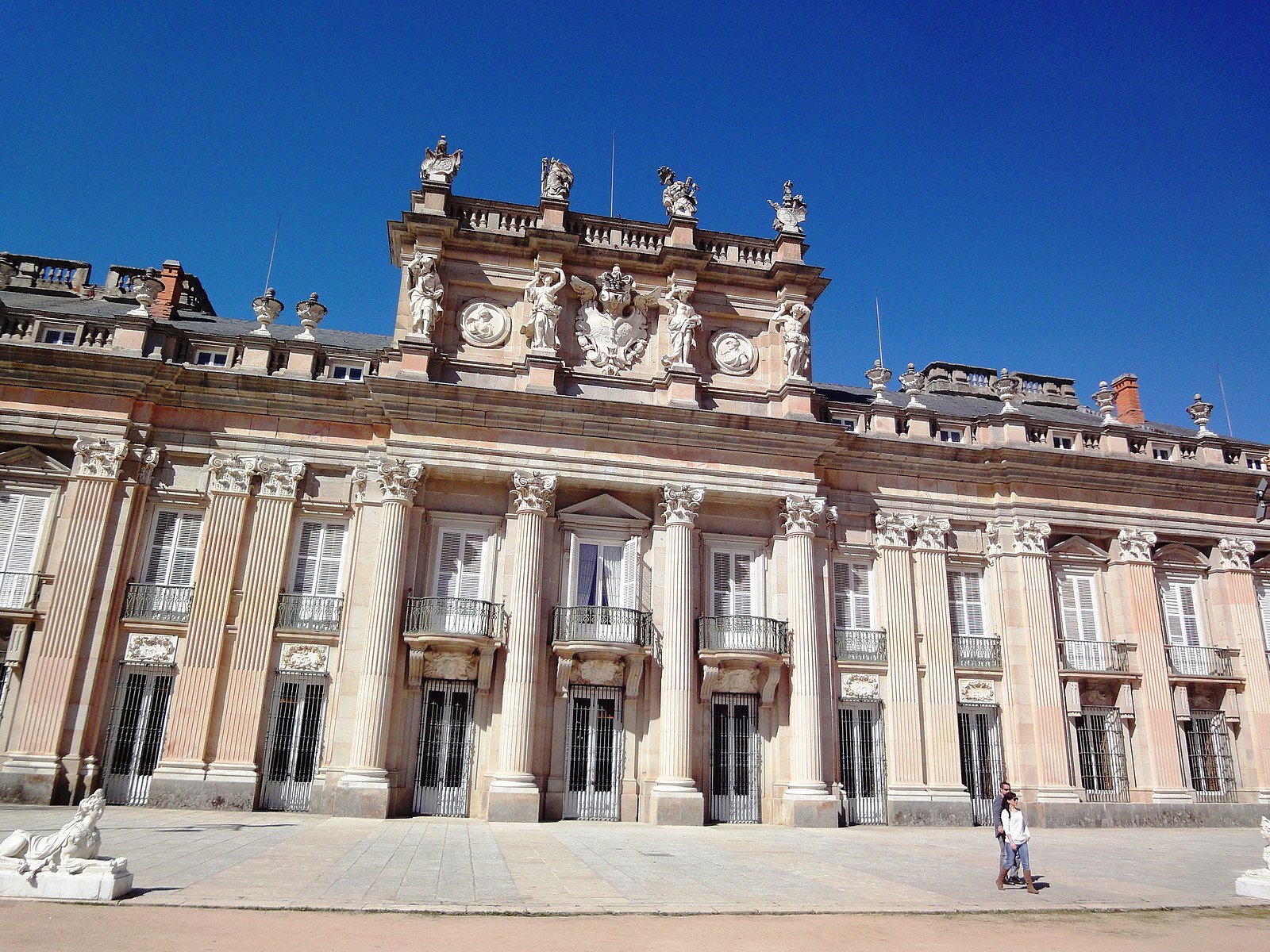 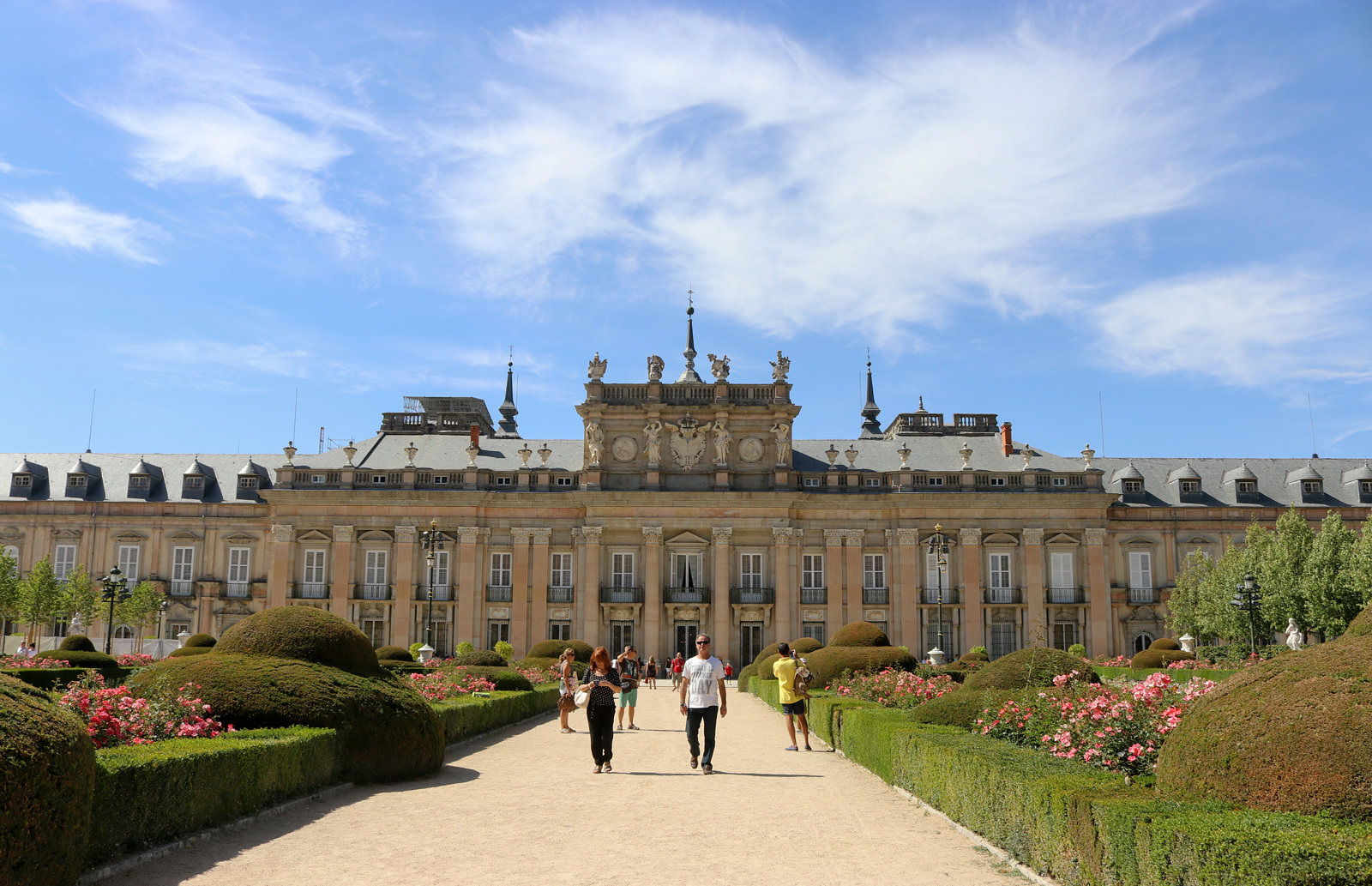 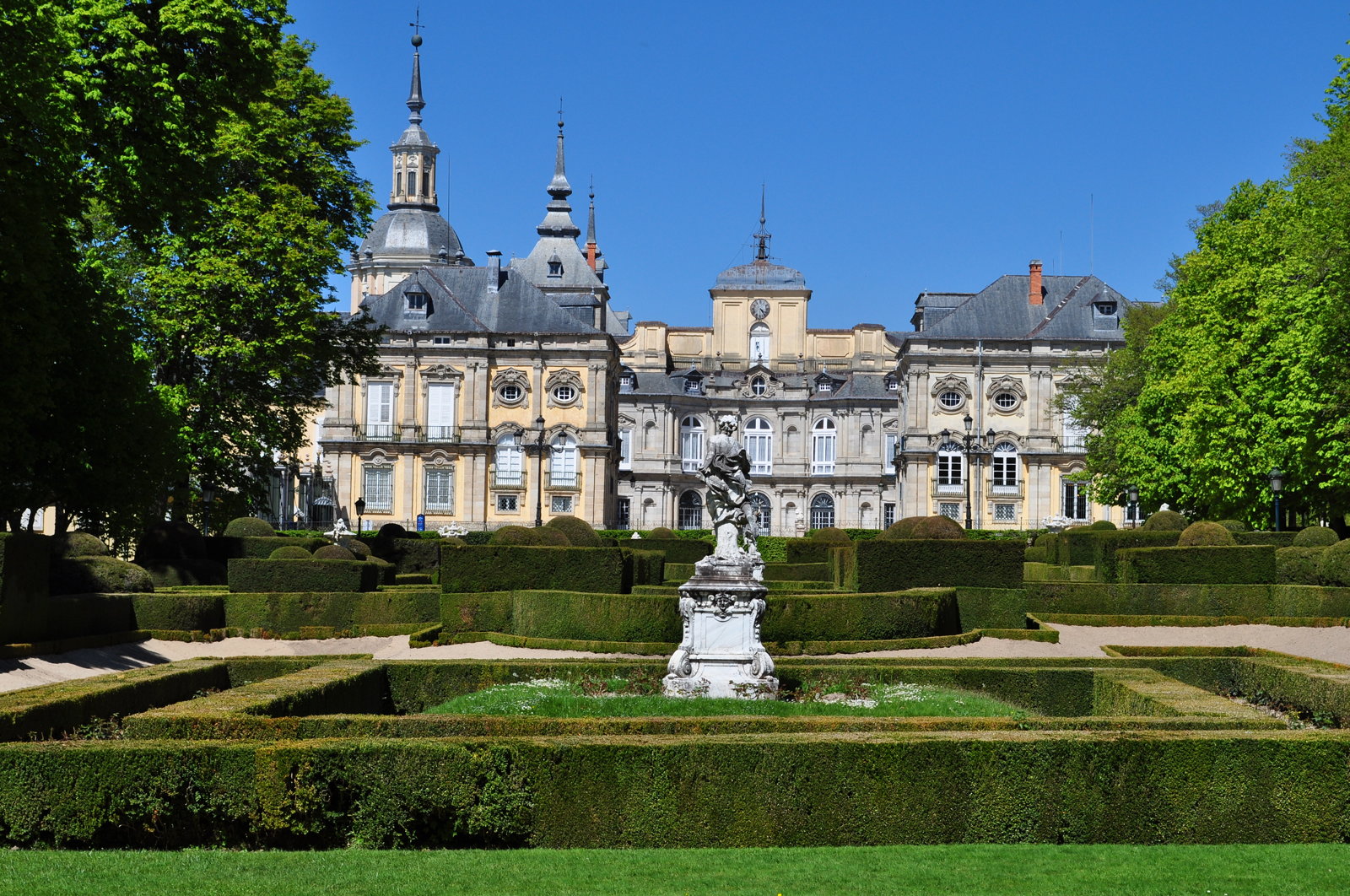 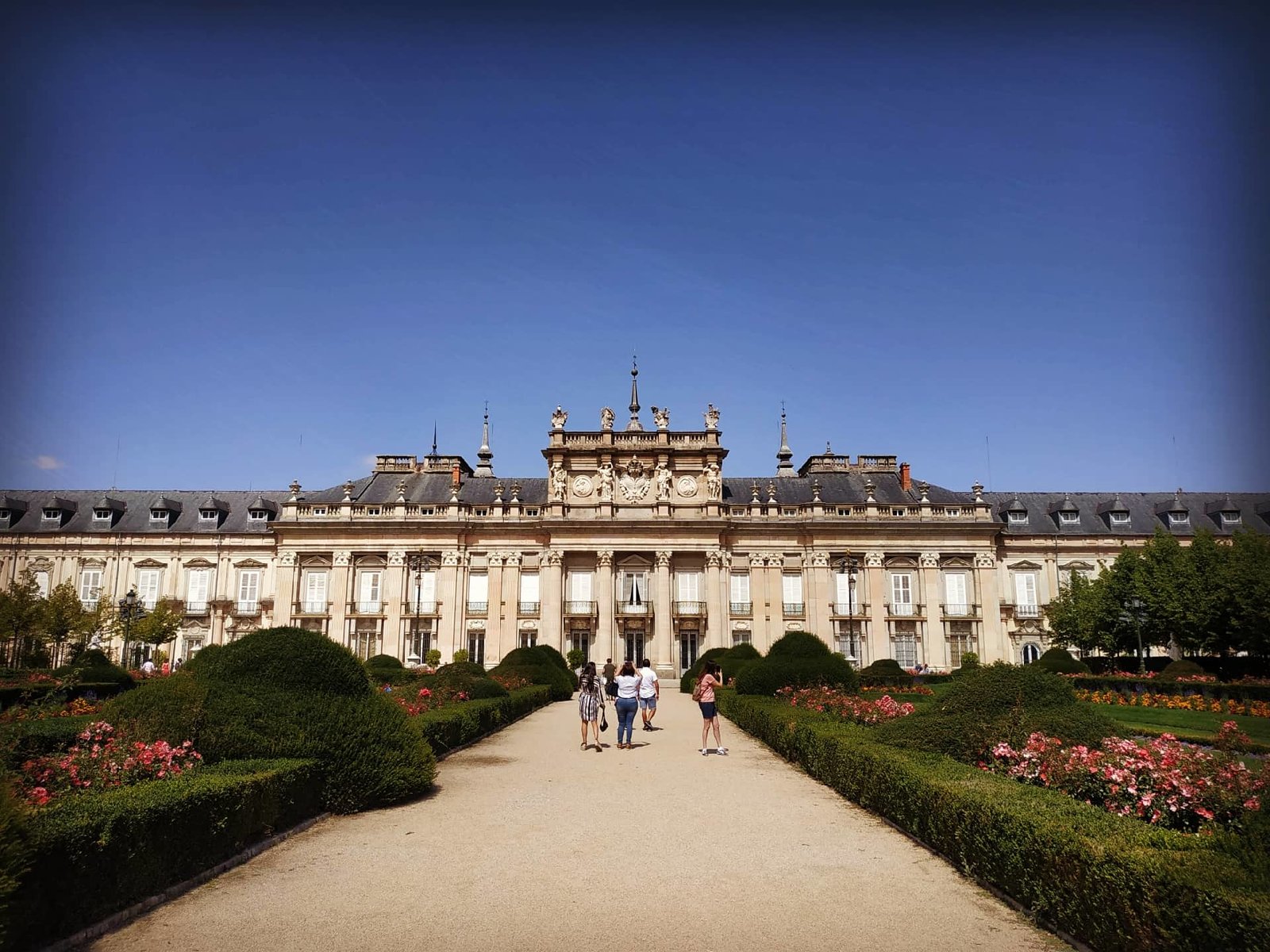 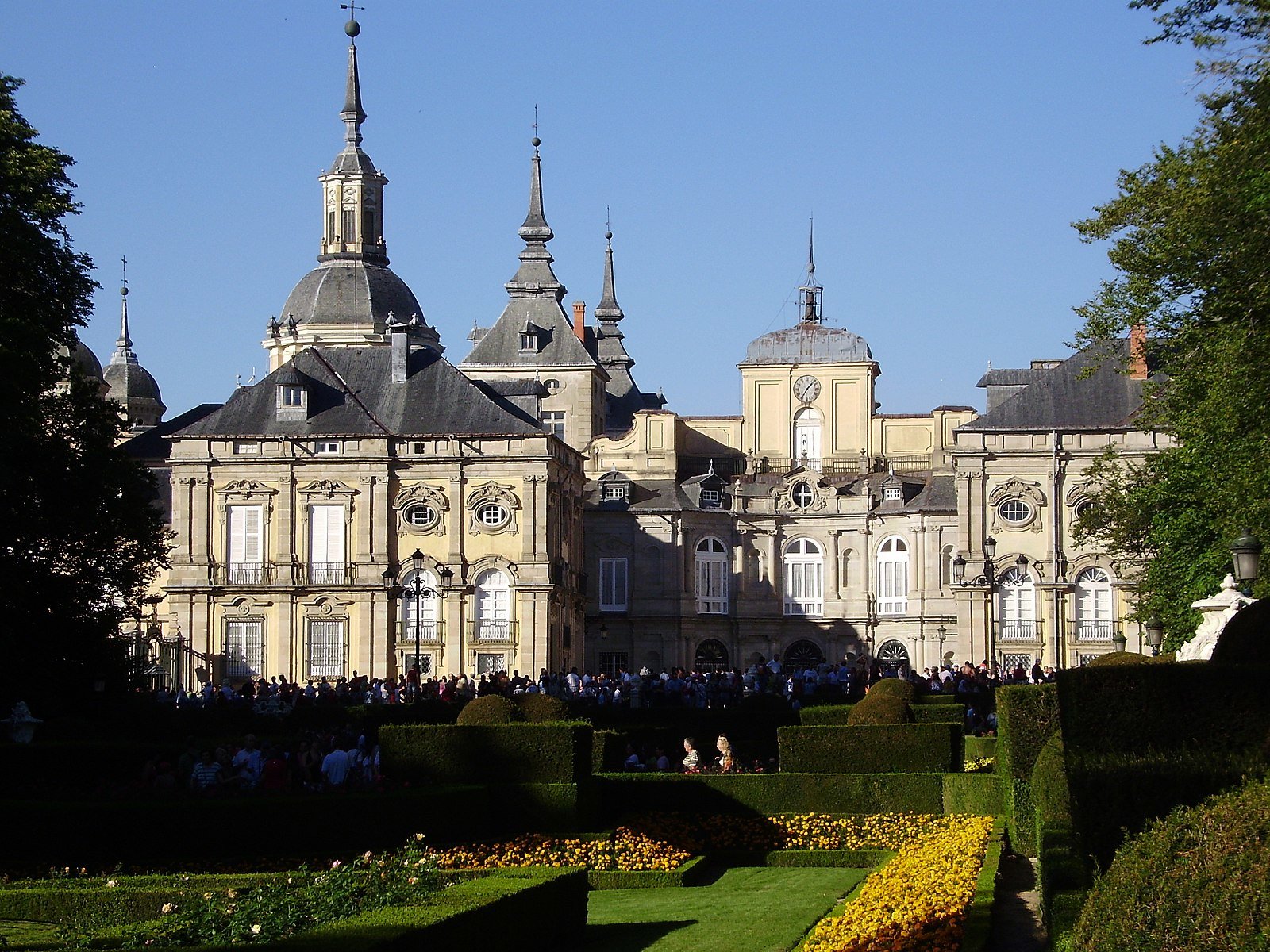 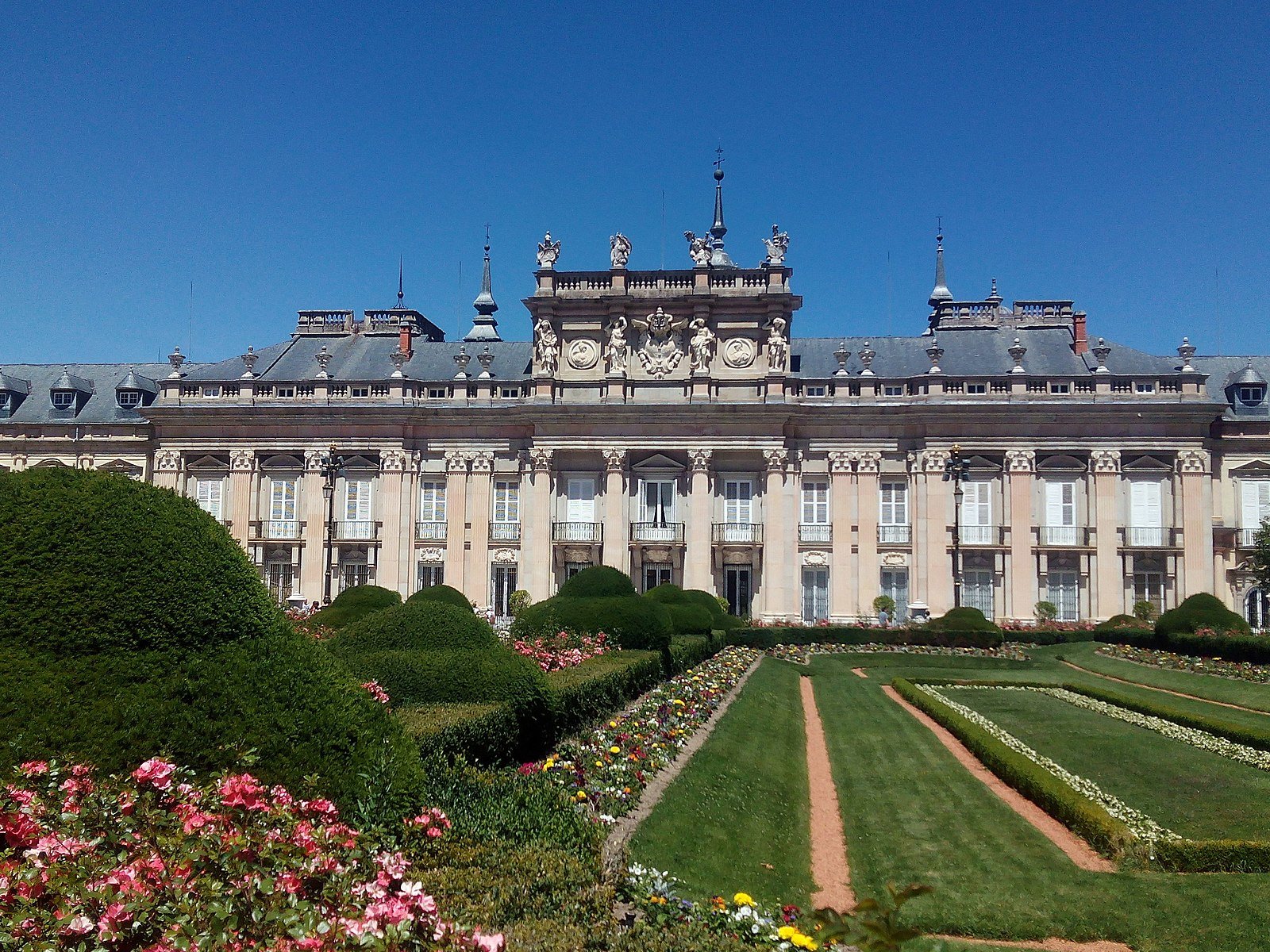 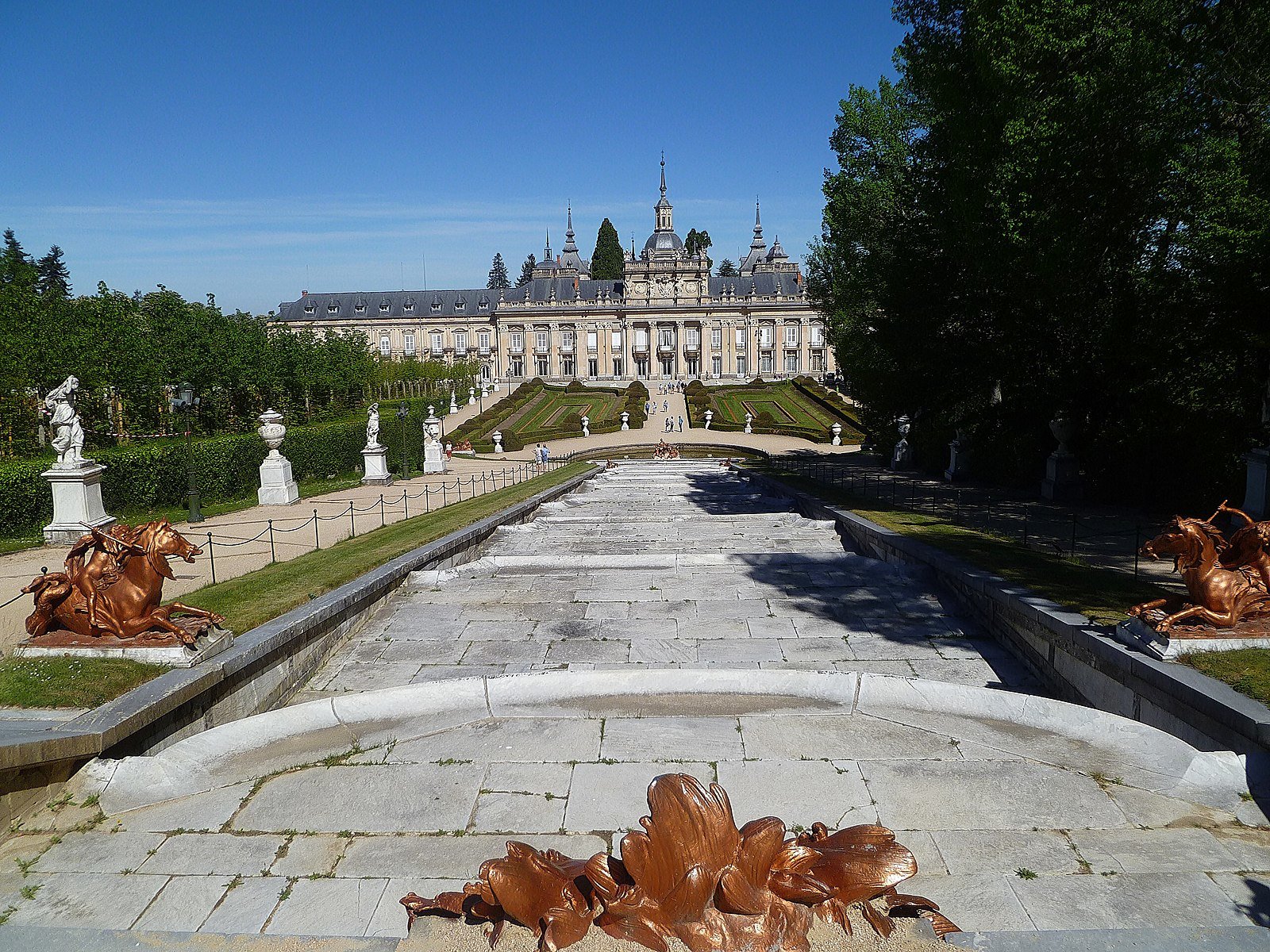 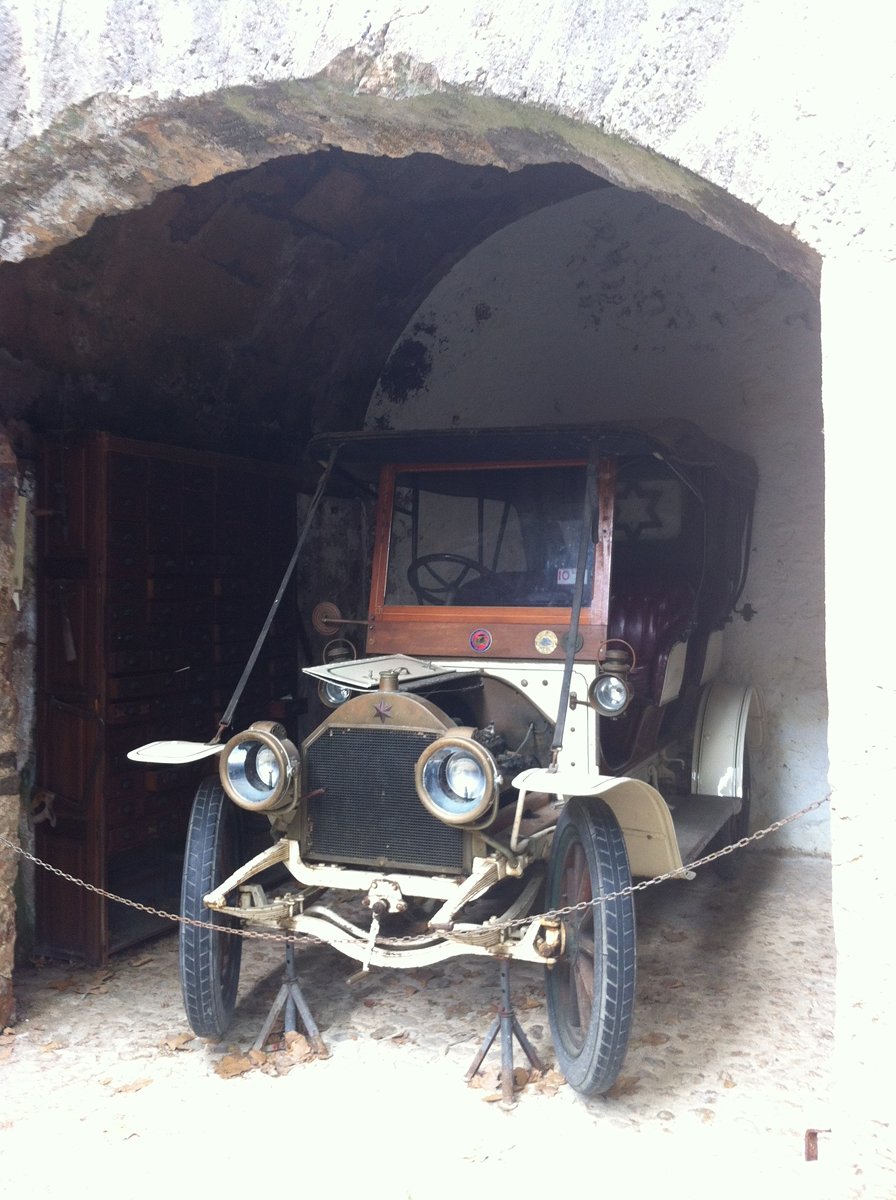 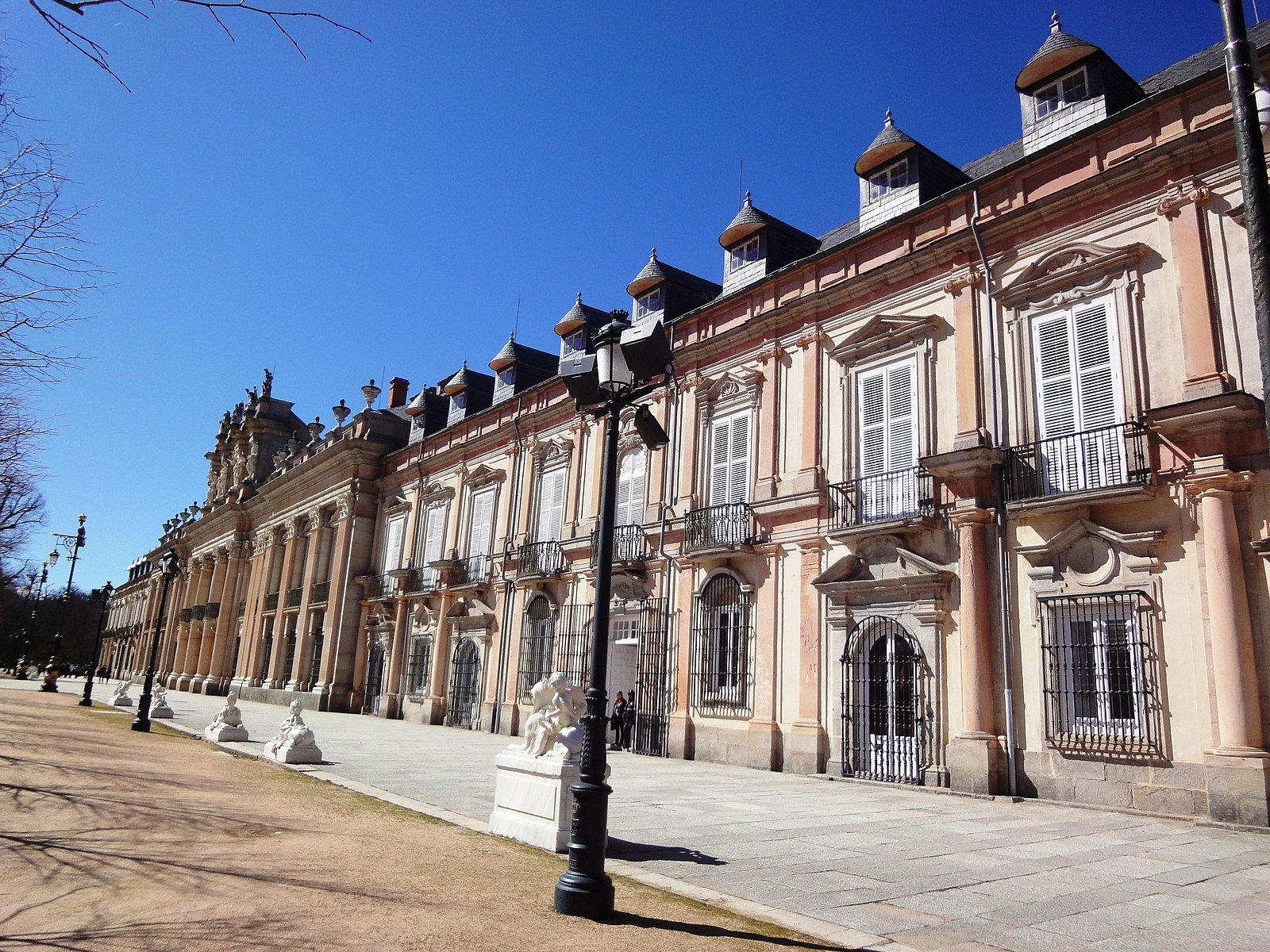