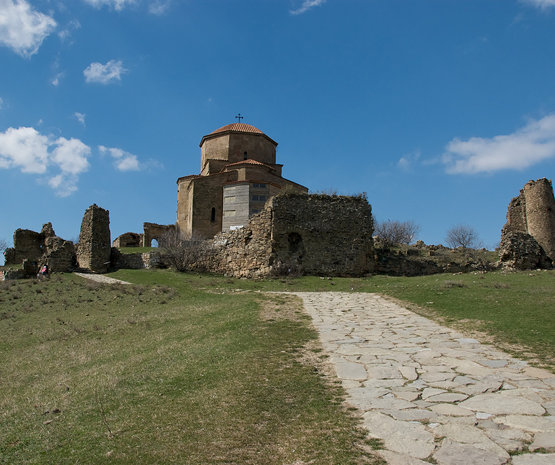 Jvari Monastery stands on the rocky mountaintop at the confluence of the Mtkvari and Aragvi rivers, overlooking the village of Mtskheta, which was formerly the capital of the Kingdom of Iberia.

According to traditional accounts, on this location in the early 4th century Saint Nino, a female evangelist credited with converting King Mirian III of Iberia to Christianity, erected a large wooden cross on the site of a pagan temple. The cross was reportedly able to work miracles and therefore drew pilgrims from all over Caucasus. A small church was erected over the remnants of the wooden cross in c.545 named the “Small Church of Jvari”.

The present building, or “Great Church of Jvari”, was built between 586 and 605 by Ersimtavari Stepanoz I. The importance of Jvari complex increased over time and attracted many pilgrims. In the late Middle Ages, the complex was fortified by a stone wall and gate, remnants of which still survive. During the Soviet period, the structure was largely ignored, with access rendered difficult by tight security at a nearby military base. After the independence of Georgia, the building was restored to active religious use. Jvari was listed together with other monuments of Mtskheta in 1996 as a UNESCO World Heritage Site.

However, over the centuries the structures suffered damage from rain and wind erosion and inadequate maintenance, and Jvari was listed by the World Monuments Fund as one of the 100 most endangered sites in the world in 2004. After considerable restoration work, it was removed from the list in 2007.

The Jvari church is a very early tetrachonch (i.e. a four-apse domed building) structure. Between the apses there are three-quarter circular niches used as side chapels, which communicate with the central space. The transition from the square bay to the dome circle is effected through three rows of squinches. This design had a great impact on the further development of Georgian architecture and served as a model for many other churches not only in Georgia, but the whole region of South Caucasus.

Varied bas-relief sculptures with Hellenistic and Sasanian influences decorate its external façades, some of which are accompanied by explanatory inscriptions in old Georgian uncial script. The entrance’s tympanum on the southern façade, is adorned with a relief of the Glorification of the Cross, and the same façade also shows an Ascension of Christ.

Town of Mtskheta as seen from Jvari Monastery — oburoni @ Flickr

Ponuponas
The views are great. This is the best Georgia has. Mountains and hills. And the views. Loved it. 15min is enough to see it all.

Veronika Kandaurova
Great place to visit. Windy and mysterious. One of the oldest monasteries in Georgia.

Georgia Pictures
Terrific view of Mtskheta from the Jvari Monastery. The monastery sits on a hilltop, and looks down upon the convergence of two rivers.

Lisi lake (Georgian: ლისის ტბა) is a small lake in the vicinity of Tbi

Turtle Lake is a direct English translation of Kus Tba

The Collegiate Church of St Peter at Westminster, which is almost

Add to wishlist
I've been here
Visited
Abbey of Saint-Remi

The Abbey of Saint-Remi is an abbey in Reims, France, founded in the

The Monastery of Saint John of Rila, better known as the Rila 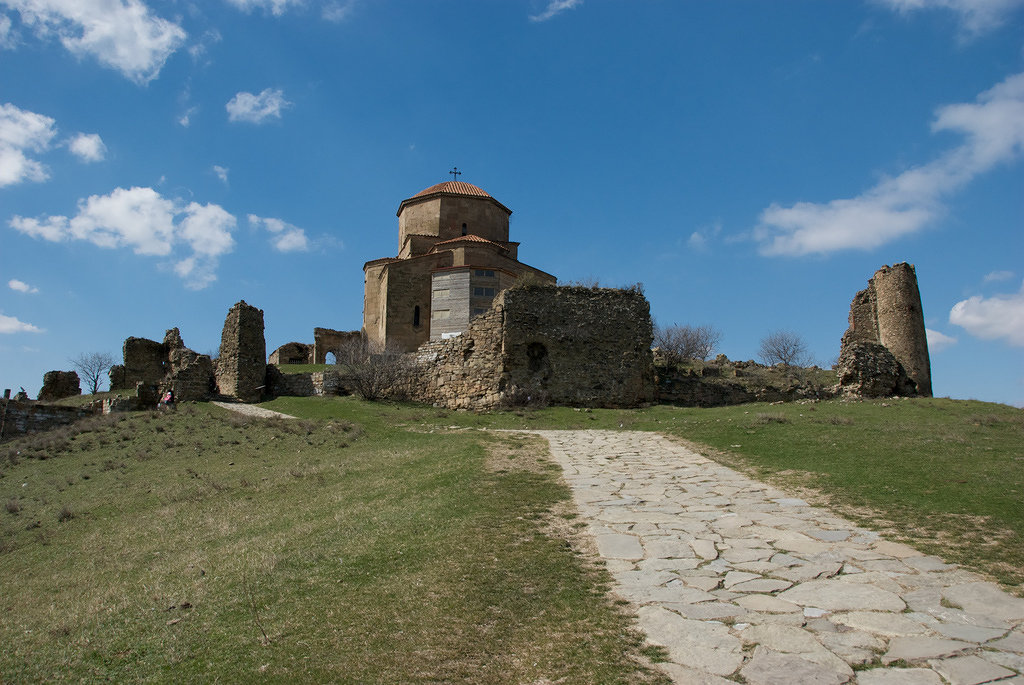 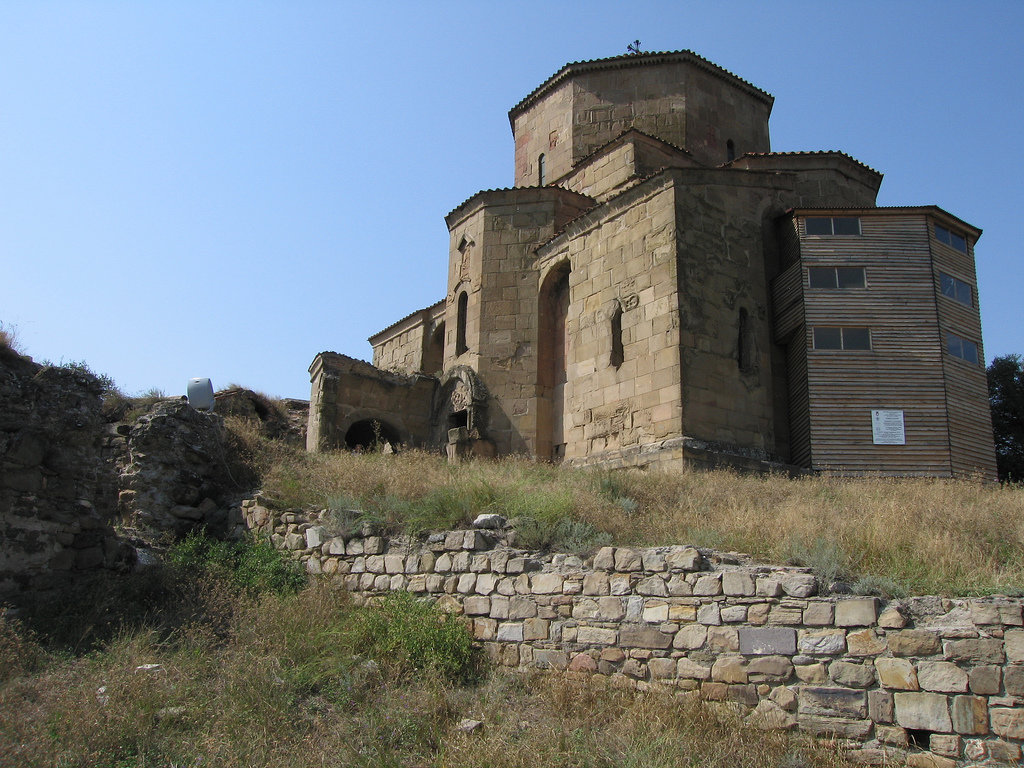 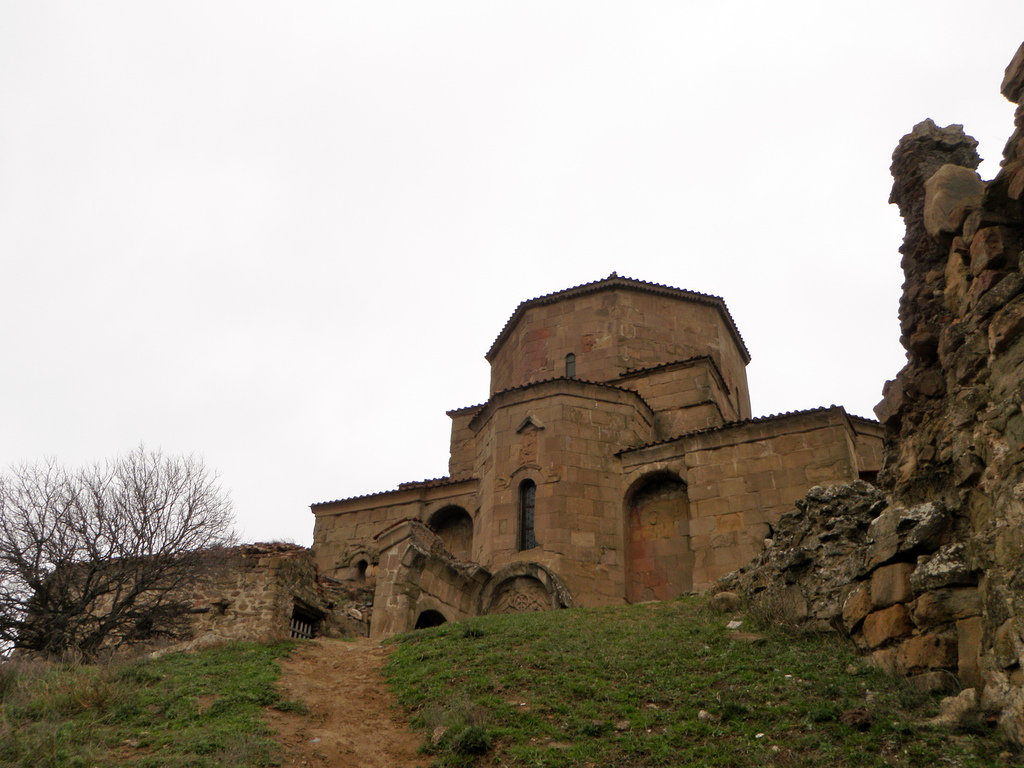