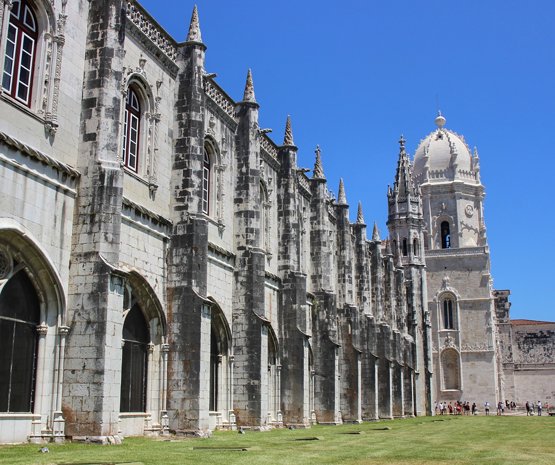 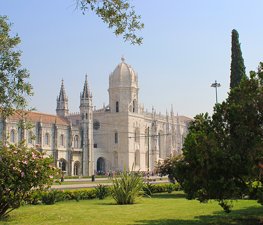 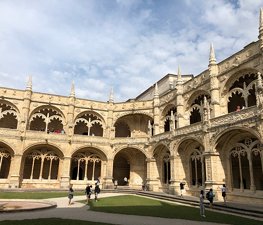 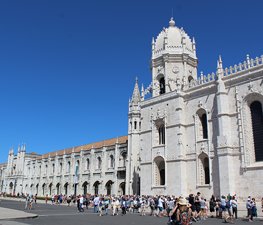 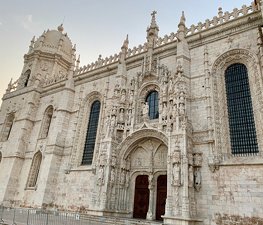 The Hieronymites Monastery (Mosteiro dos Jerónimos, pron. Шаблон:IPA2) is located in the Belém district of Lisbon, Portugal. This magnificent monastery can be considered one of the most prominent monuments in Lisbon and is certainly one of the most successful achievements of the Manueline style. In 1983 it was classified by the UNESCO, with nearby Torre de Belém, as a World Heritage Site.

The house for the Hieronymite monks was built on the same site of the Ermida do Restelo, a hermitage that was founded by Henry the Navigator at about 1450. It was at this hermitage, that was already in disrepair, that Vasco da Gama and his men spent the night in prayer before departing for India in 1497.

- main sponsor of the Monastery - on the Western portal. The figure behind the king is St Jerome.]] The existing structure was started on the orders of Manuel I (1515-1520) to commemorate Vasco da Gama's successful return from India. It was originally meant as a church for the burial of the House of Aviz, but it also became a house of prayer for seamen leaving or entering port.

Construction of the monastery began in 1502 and took 50 years to complete. He used pedra lioz, a local gold-coloured limestone, for its construction. The building of the monastery was funded by a 5% tax on eastern spices, with the exceptions of pepper, cinnamon and cloves, revenue from which went straight to the Crown. By this influx of riches, the architects had enough financial margin to think big. The enormous amount of funds needed for this monastery, meant abandoning the construction of the Aviz pantheon in the Monastery of Batalha.

The monastery was designed in the Manueline style by Diogo de Boitaca (who was probably one of the originators of this style with the Igreja de Jesus in Setúbal). He built the church, the monastery, the sacristy and the refectory. He was succeeded by the Spaniard João de Castilho, who took charge of construction in around 1517. João de Castilho gradually moved from the Manueline style to the Plateresco style, a style with lavish decorations that remind of silver ware (plata = silver). There were several sculptors who made their mark on this building. Nicolau Chanterene added depth with his Renaissance themes. The construction came to a halt when the king Manuel I died in 1520.

The architect Diogo de Torralva resumed the construction of the monastery in 1550, adding the main chapel, the choir and completing the two storeys of the monastery, using only Renaissance motifs. His work was continued in 1571 by Jérôme de Rouen (also called Jerónimo de Ruão) who added some Classical elements. The construction stopped in 1580 with the union of Spain and Portugal, because the building of the Escorial in Spain was now draining away all the funds.

The monastery withstood the Great Earthquake of 1755 without too much damage. But when the building became vacant in 1833 by the abolition of the religious orders in Portugal, it began to deteriorate to the point of almost collapsing. A cupola was later added to the southwestern tower.

On December 13, 2007 the Treaty of Lisbon has been signed at the monastery, laying down the basis for the reform of the European Union.

The ornate main entrance to the monastery was designed by João de Castilho and is considered as one of the most magnificent of his time. This shrine-like portal is large, 32 m high and 12 m wide, extending up for two stories. It features, surrounded by an abundance of gables, pinnacles, many carved figures standing under a baldachin in exquisitely carved niches, around a statue of Henry the Navigator, standing on a pedestal between the two doors.

The tympanum, above the double door, displays in half-relief two scenes from the life of St. Jerome. On the left, the removal of a thorn by St. Jerome from a lion's paw, after which the lion became his best friend. The right scene depicts the saint in the desert. The spandrel between these scenes shows the coat-of-arms of king Manuel I. The statue with the sword in the niche of the pier probably represents Henry the Navigator Wherever one looks in the archivolt and tympanum, one sees all the elements of the Manueline style.

The Madonna of Belém stands on a pedestal on top of the archivolt, above it stands a statue of the Archangel Michael and on top of the portal stands the cross of the Order of Christ. The portal is harmoniously flanked on each side by a large window with richly decorated mouldings.

This western portal is a good example of the transition from the Gothic style to Renaissance. It was built by Nicolau Chanterene in 1517. This was probably his first commission in Portugal. It is now spanned by a vestibule, added in the 19th century, that forms a transition between the church and the ambulatory.

The tympanum depicts the Annunciation, the Nativity, and the Epiphany. Two angels, holdings the arms of Portugal, close the archivolt. The splays on each side of the portal are filled with statues, among them king Manuel I and his second wife Maria of Aragón, kneeling in a niche under a lavishly decorated baldachin. They are flanked by their patron saints St. Jeronimos and John the Baptist.

.]] Diogo Boitac laid the foundations for this three-aisled church with five bays under a single vault, a clearly marked but only slightly projecting transept and a raised choir. The aisles and the nave are of about equal height in the manner of a hall church. Boitac built the walls of the church as far as the cornices and then started with the construction of the adjoining monastery.

João de Castilho, a Spanish architect and sculptor, continued the construction in 1517. He completed the retaining walls and the unique single-span ribbed vault, a combination of stellar vaulting and tracery vaults spanning the 19 m-wide church. Each set of ribs in the vaulting is secured by bosses. The bold design (1522) of the transversal vault of the transept lacks any piers or columns, while Boitac had originally planned three bays in the transept. The unsupported vault of the transept gives the viewer the impression as if it floats in the air.

He also ornamented the six 25m-high, slender, articulated, octagonal columns with refined grotesque or floral motives announcing the Renaissance style. The northern column closest to the transept shows a medallion that probably is a portrait of Boitac or João de Castilho.

The end result of the construction of this Late Gothic hall church is aesthetically and architecturally a masterwork. It augments the spatial effect of this vast building.

At the end of the side aisles and on both sides of the choir stand Manueline altars dating from the 16th and the 17th centuries. They are decorated with carved work in golden and green colours. One of them has a statue of St. Jerome in multi-coloured enamelled terracotta.

This chancel was ordered by Queen Catherine of Habsburg as the final resting place for the royal family. It is the work of Jerónimo de Ruão (Jean de Rouen) in Classical style. The royal tombs rest on marble elephants and are set between Ionic pillars, topped by Corinthian pillars. The tombs on the left side of the choir belong to king Manuel I and his wife Maria of Aragon, while the tombs on the right side belong to King João III and his wife Queen Catherine of Habsburg.

Within the church, close to the western portal, are the stone tombs of Vasco da Gama (1468-1523), and of the great poet and recorder of the discoveries, Luís de Camões (1527-1570). Both tombs were sculpted by the nineteenth century sculptor Costa Mota in a harmonious neo-Manueline style. The mortal remains of both were transferred to these tombs in 1880.

Work on the vast square cloister (55 x 55 m) of the monastery was begun by Boitac. He built the groin vaults with wide arches and windows with tracery resting on delicate mullions. João de Castilho finished the construction by giving the lower storey a classical overlay and building a more recessed upper storey. The construction of such a two-storey cloister was a novelty at the time. Castilho changed the original round columns of Boitac into rectangular ones. He put Plateresque-style ornaments on it.

The inside walls of the cloister have a wealth of Manueline motives with nautical ornaments, and European, Moorish ans eastern elements. The decorations on the outer walls of the inner courtyard were made in Plateresco style by Castilho. This ornamentation on the walls and the traceried arches of the arcades give the construction a filigree aspect.

The round arches and the horizontal structure are clearly in line with the Renaissance style, while at the same time there is also a relationship with Spanish architecture.

One of the arcades contains the sober tomb of the poet Fernando Pessoa. There are several tombs in the chapter house : poet and playwright Almeida Garrett (1799-1854), writer-historian Alexandre Herculano (1810-1877), president Teófilo Braga (1843-1924) and president Óscar Carmona (1869-1951). The refectory across the chapter house has several azulejos tiles from the 17th century.

The cloister had a religious function as well as a representative function by its decorative ornamentation and the dynastic symbolic motives, such as the armillarium, coat-of-arms, and the cross from the Order of Christ, showing the growing world power of Portugal.

In an extension, added to the monastery during the restoration 1850, is located the Museu Nacional de Arqueologia (National Archaeological Museum). The Museu da Marinha (Maritime Museum) is located in the west wing.

The church and the monastery, like the nearby Torre de Belém and Padrão dos Descobrimentos, symbolises the Portuguese Age of Discovery and is among the main tourist attractions of Lisbon.

Matthias
First things first: Closed on Monday! ???????? But an absolutely gorgeous sight that again shows so much detail and just look amazing! Stop by and enjoy the view! ????????????

Iain McLellan
The Church is free & there's no queue. (and better than the Monestary) however if you want to go in, don't stand in the queue. Walk 200m to archaelogy museum & buy your ticket there. Saves an hour!

Martin Eder
Impressive architectural ensemble. A must see attraction if you are in Lisbon for more than a day. The petrified visualization of 16th century Portuguese dreams of wealth and pride as a global power.

The Ritz-Carlton
Mosteiro dos Jerónimos is a beautiful 16th centuary monastery with breathtaking architecture. The main attraction is the Gothic chapel, in which some of Portugal’s historical figures are entombed.

Gabi Bulumac
A beautiful monastery with breathtaking architecture and a serenity despite its popularity.It is a Unesco site and in it's own way is as gorgeous as Notre Dame in Paris or St. Peter's in Rome......

K
Go to the museum next door for a slightly shorter queue (~20min?). The church is free but the cloisters are lovely. Doesn’t feel too busy despite the mega queue outside.
Load more comments
foursquare.com
8.5/10
Ksenia Karetnaya, Gaël Géranton de Bou and 41,338 more people have been here
I've been here
Add to wishlist

The Convent of the Order of Christ (Portuguese: Convento de Cristo),

Add to wishlist
I've been here
Visited
Monastery of Tibães 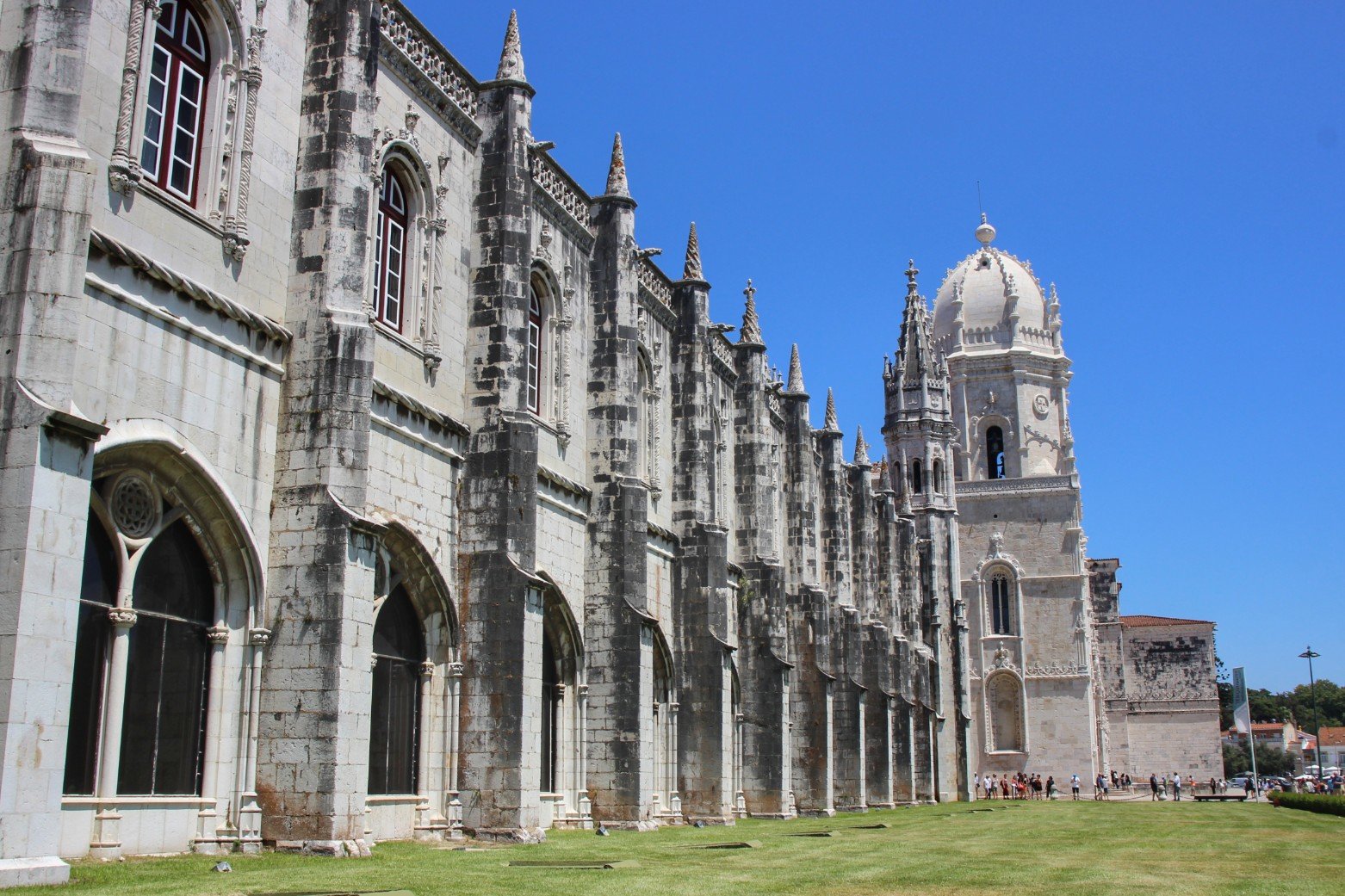 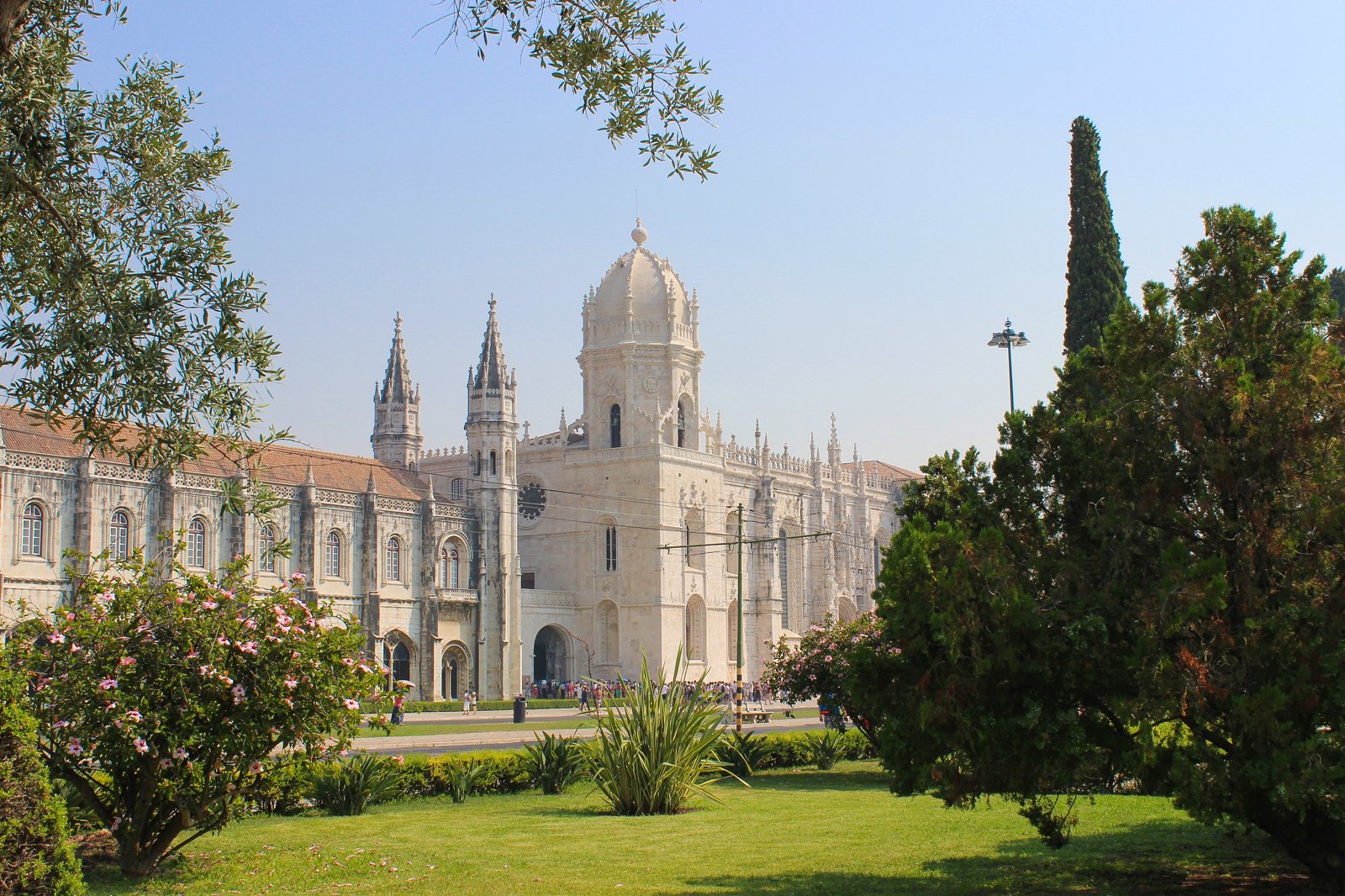 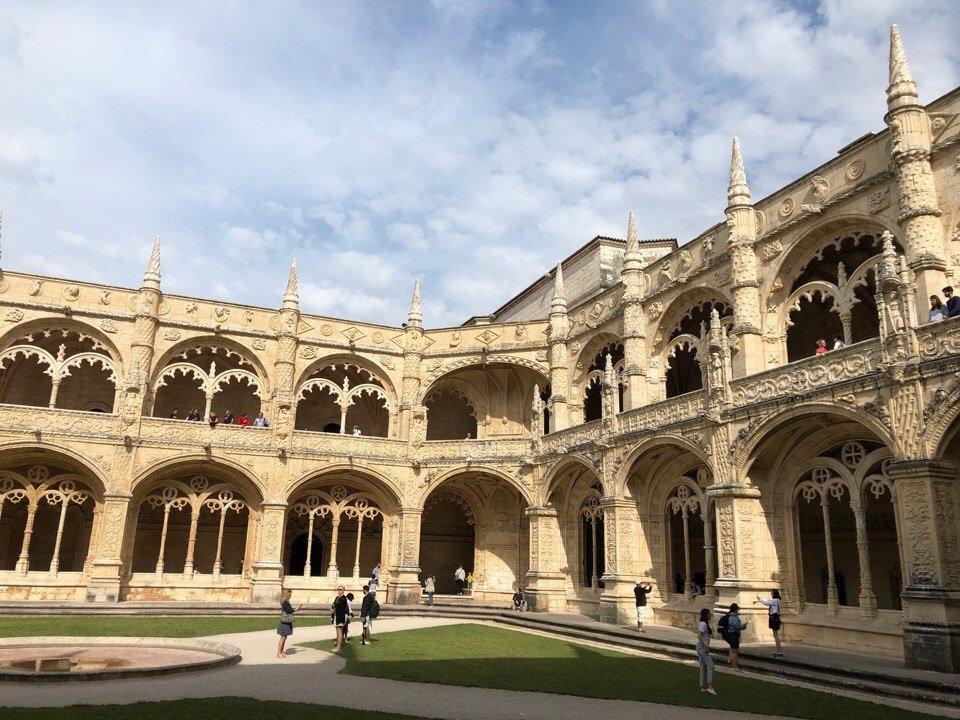 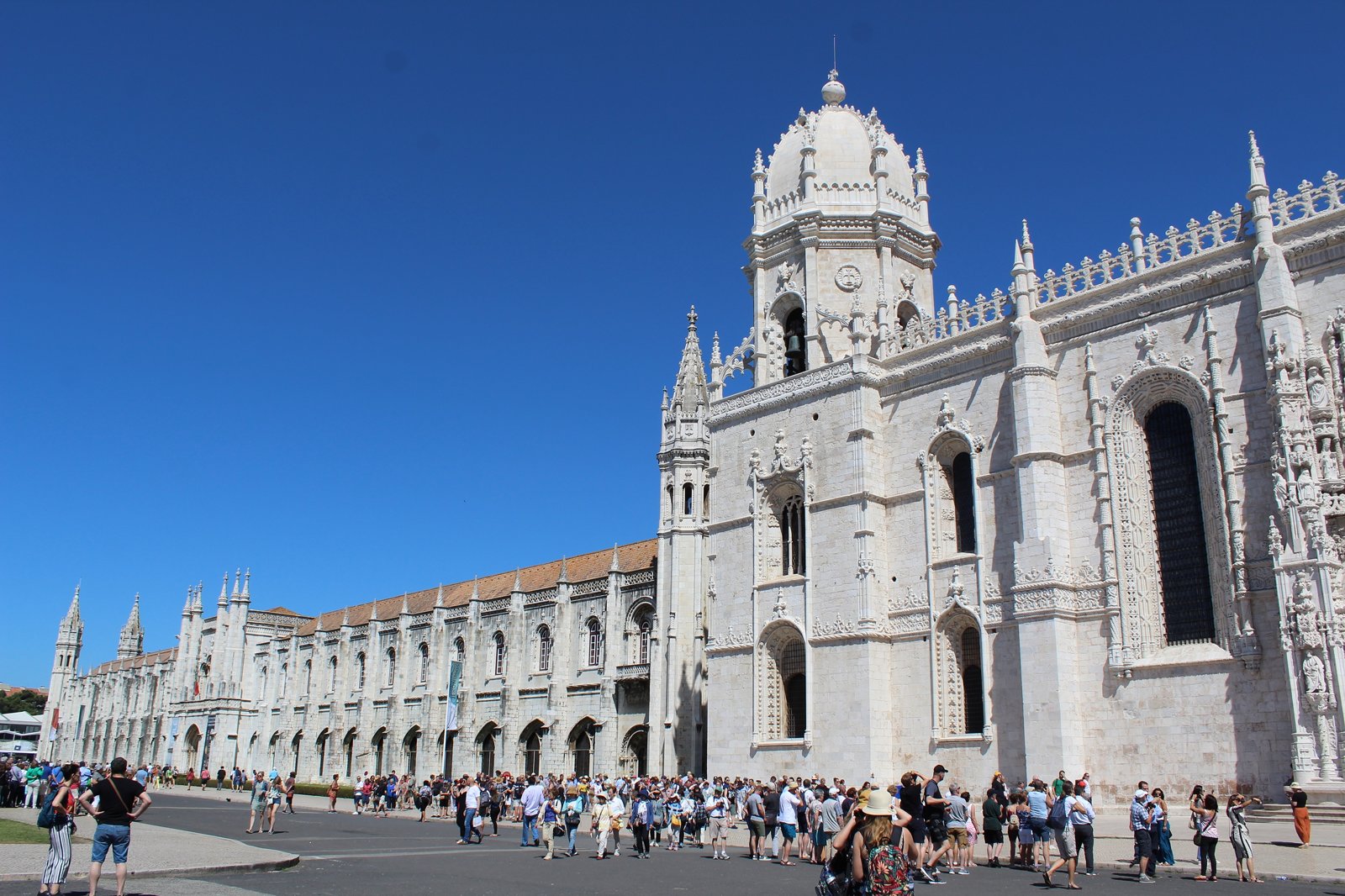 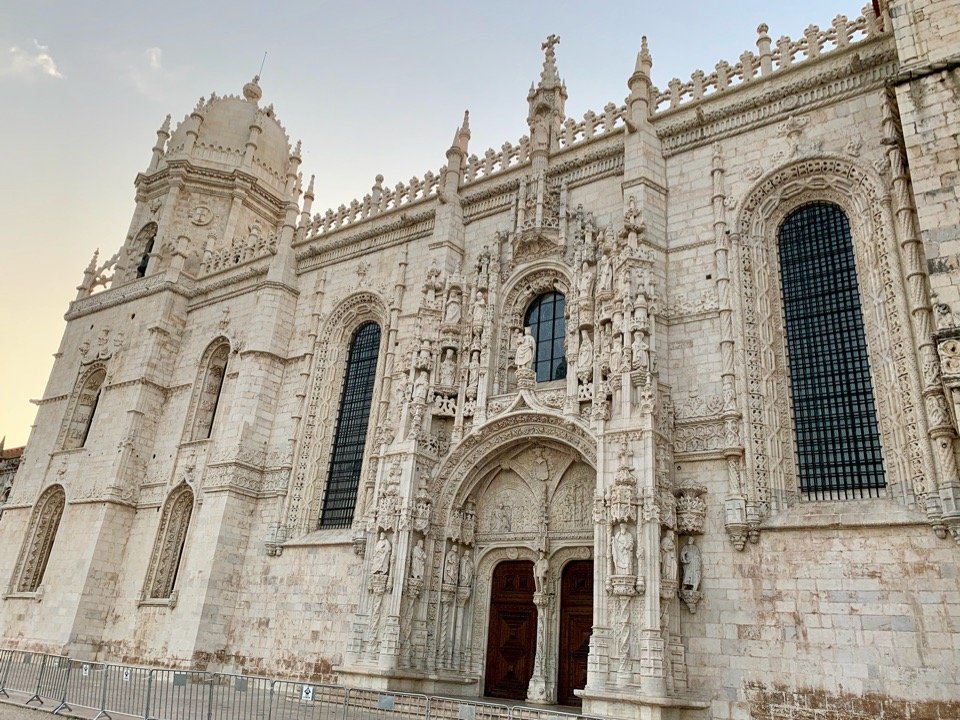 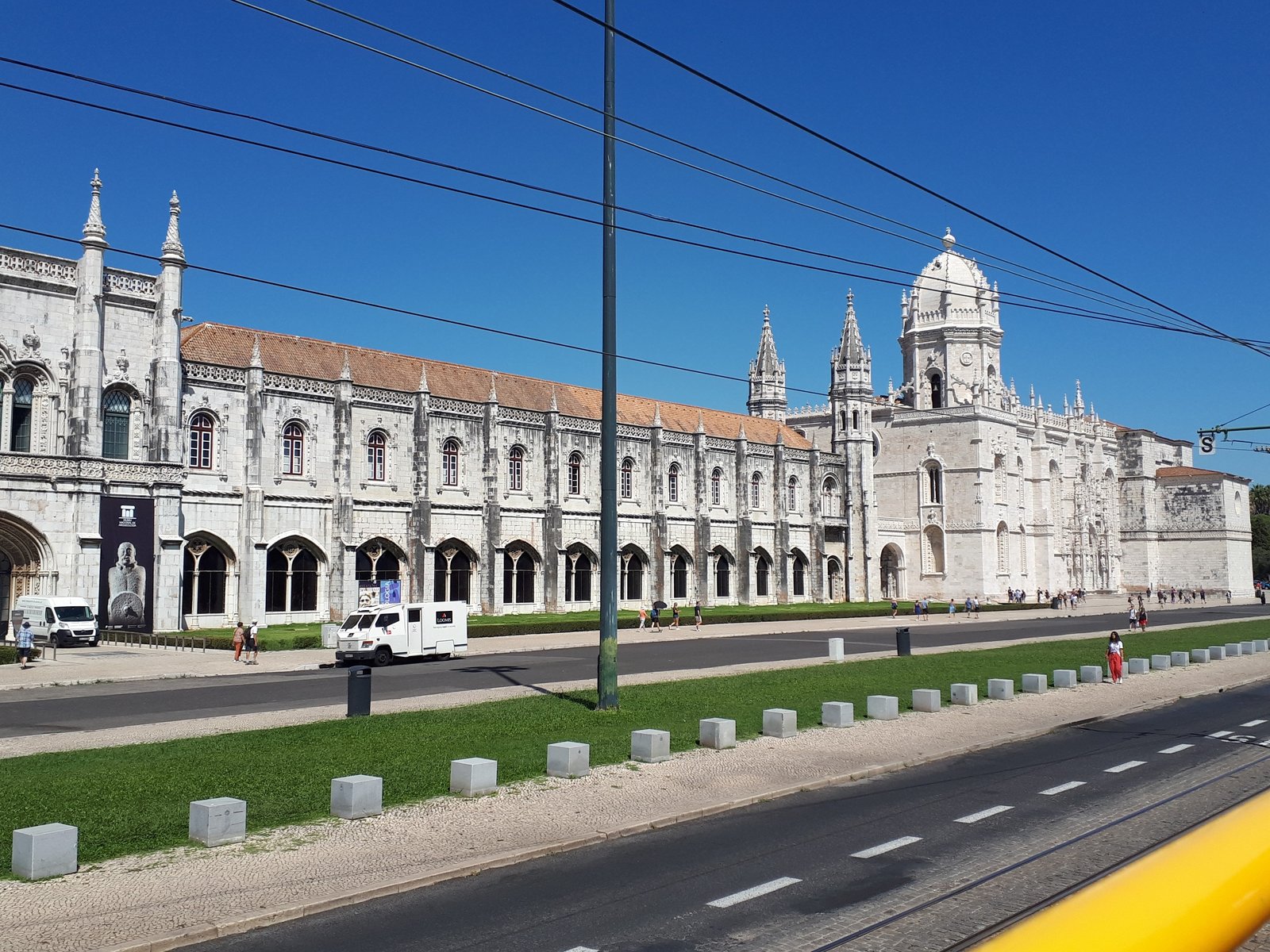 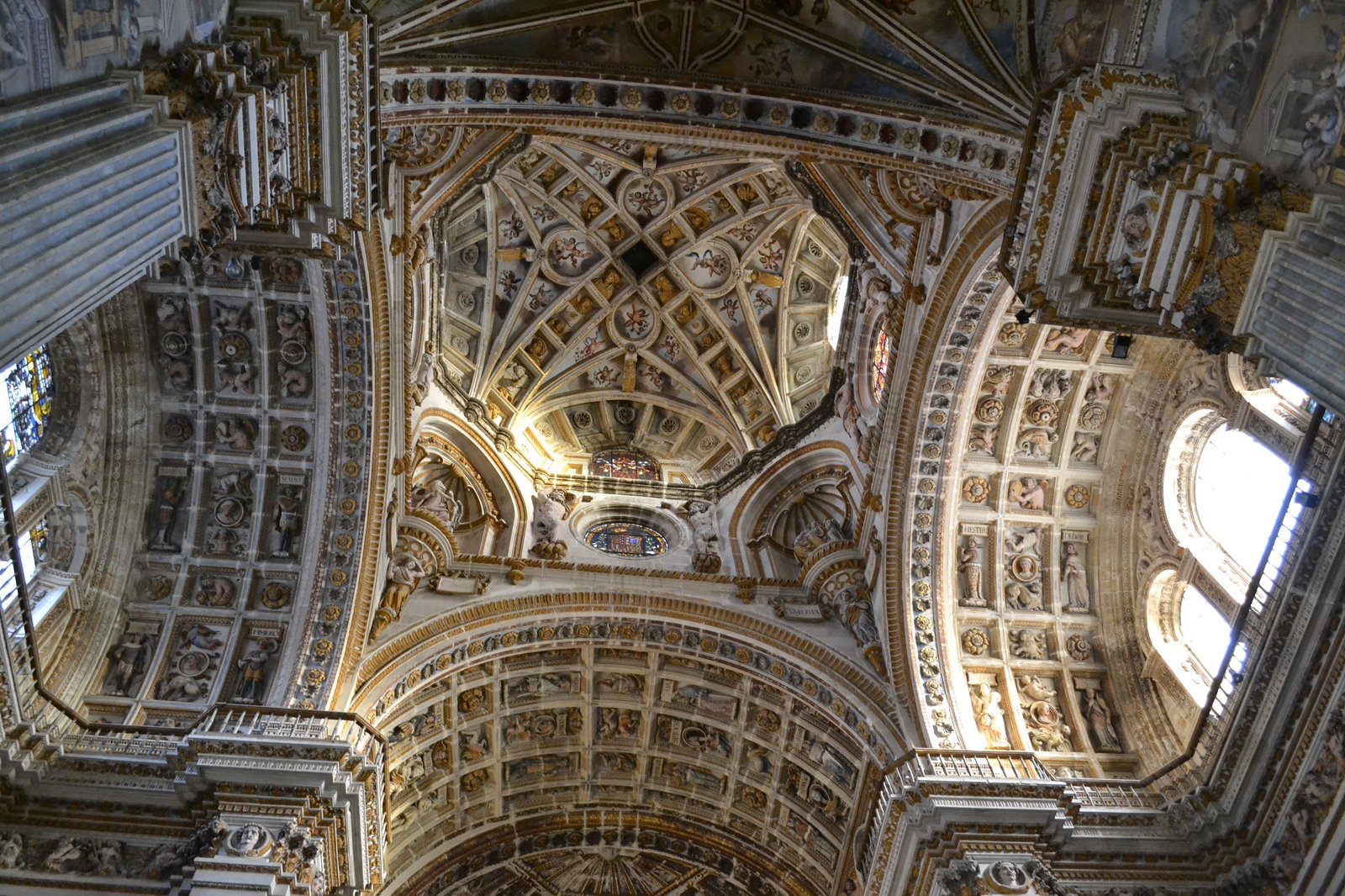 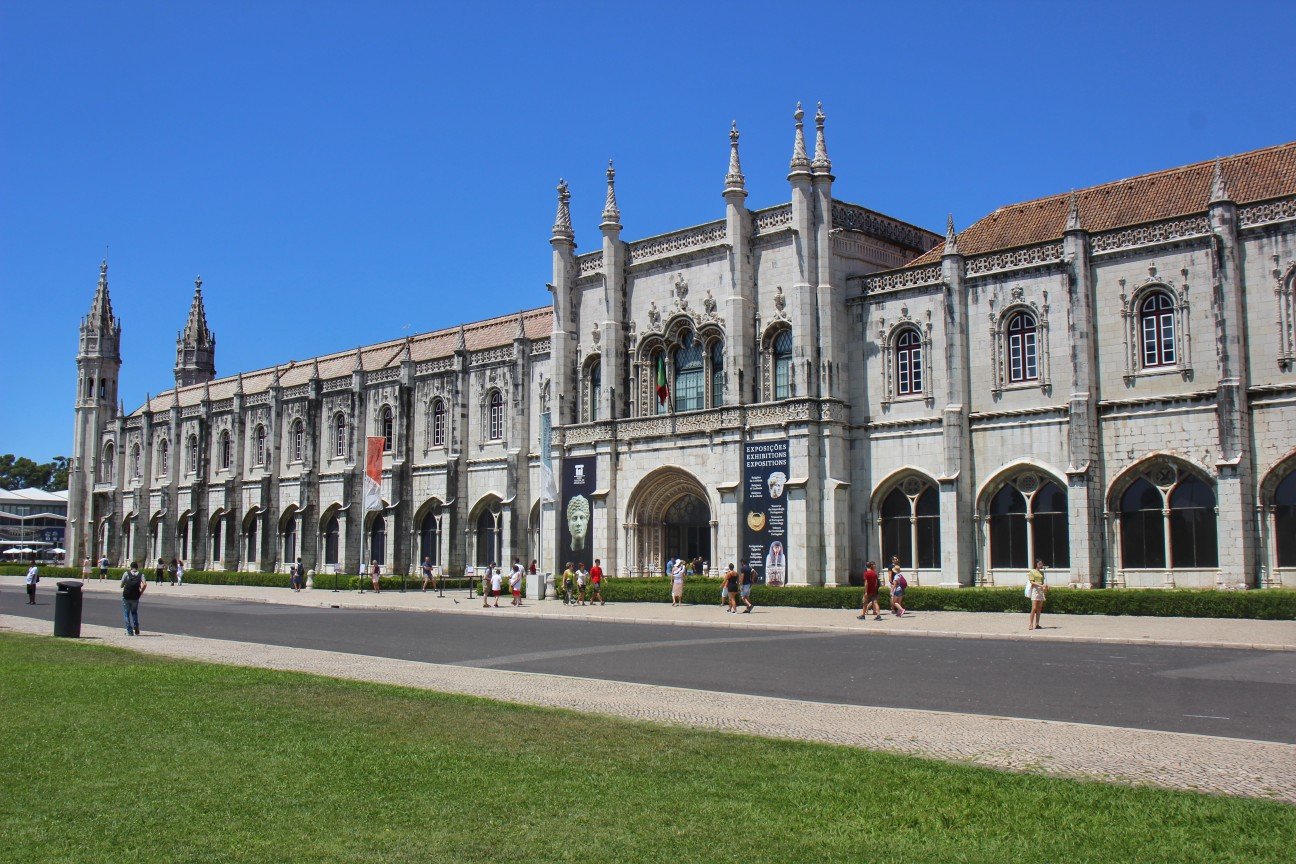 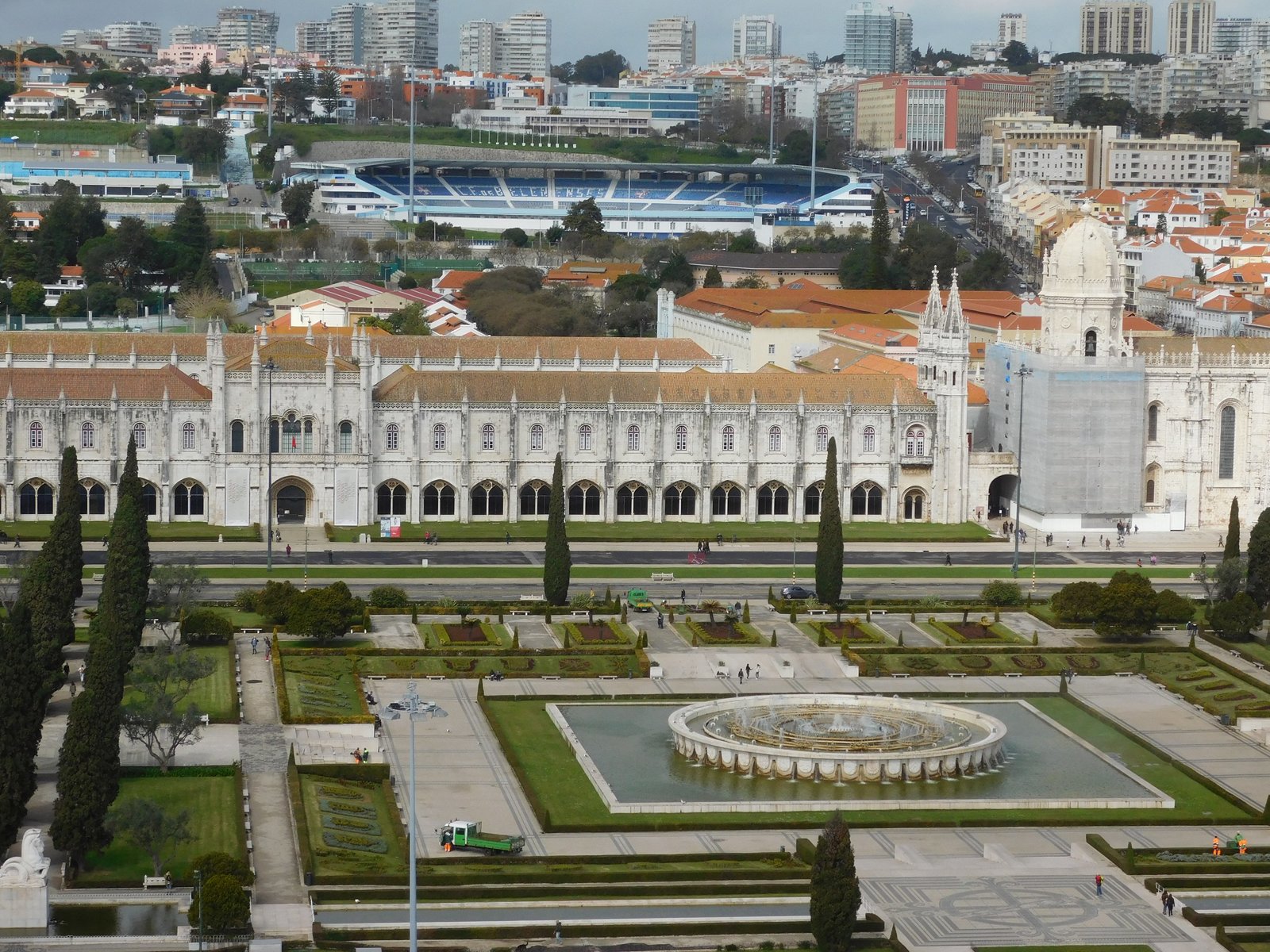 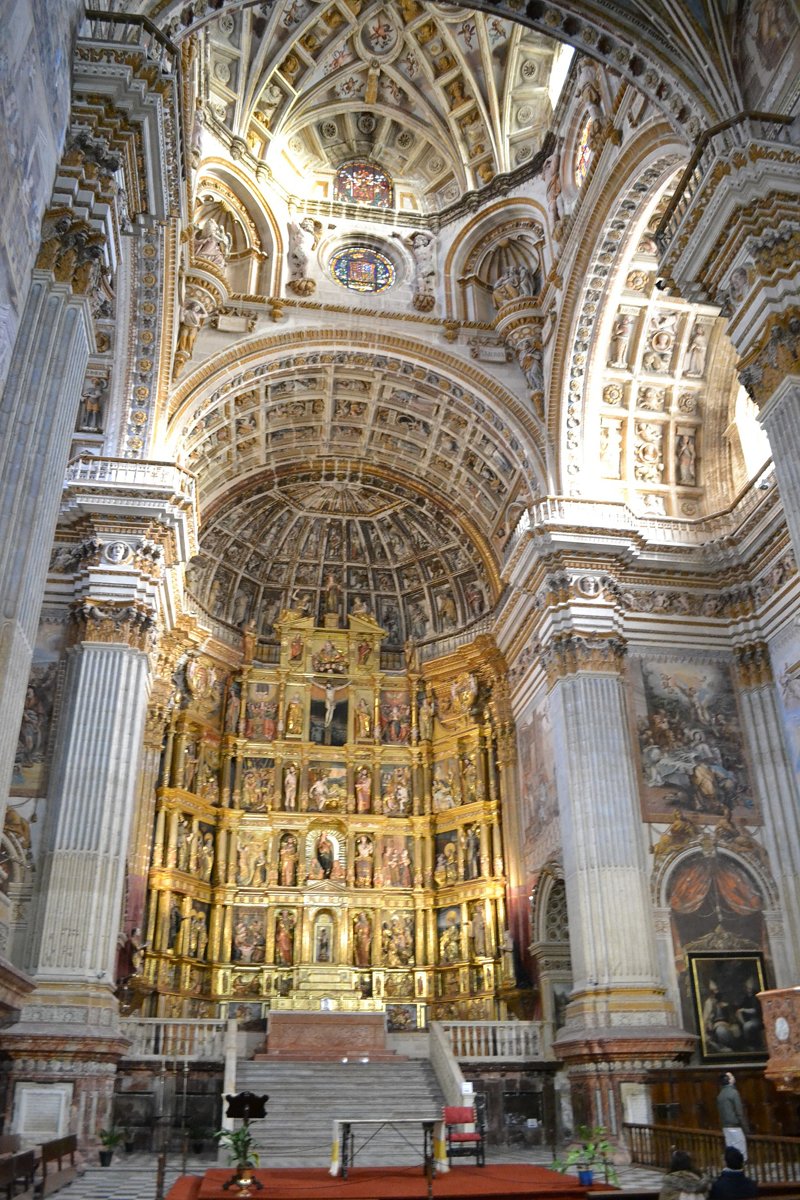 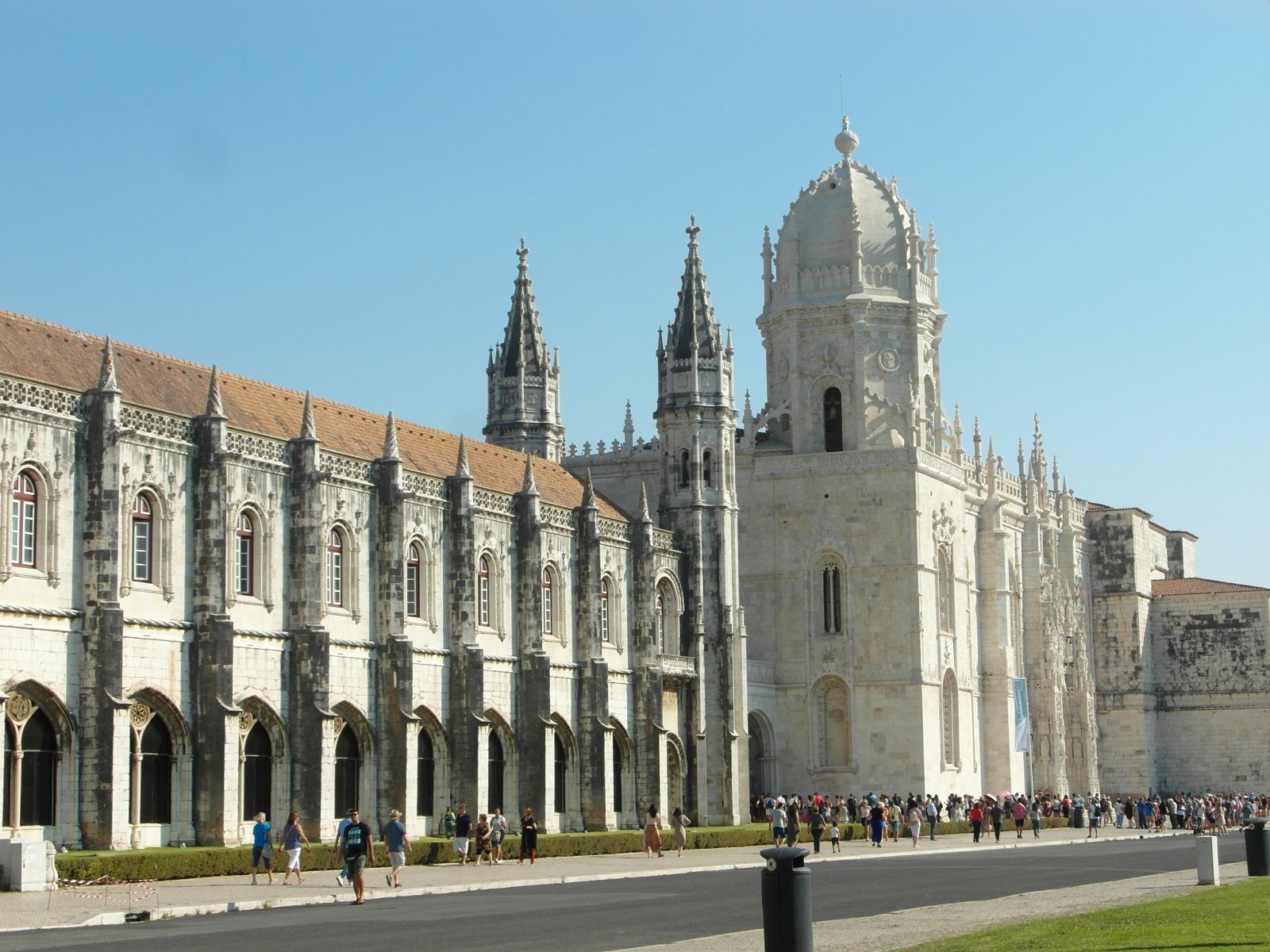 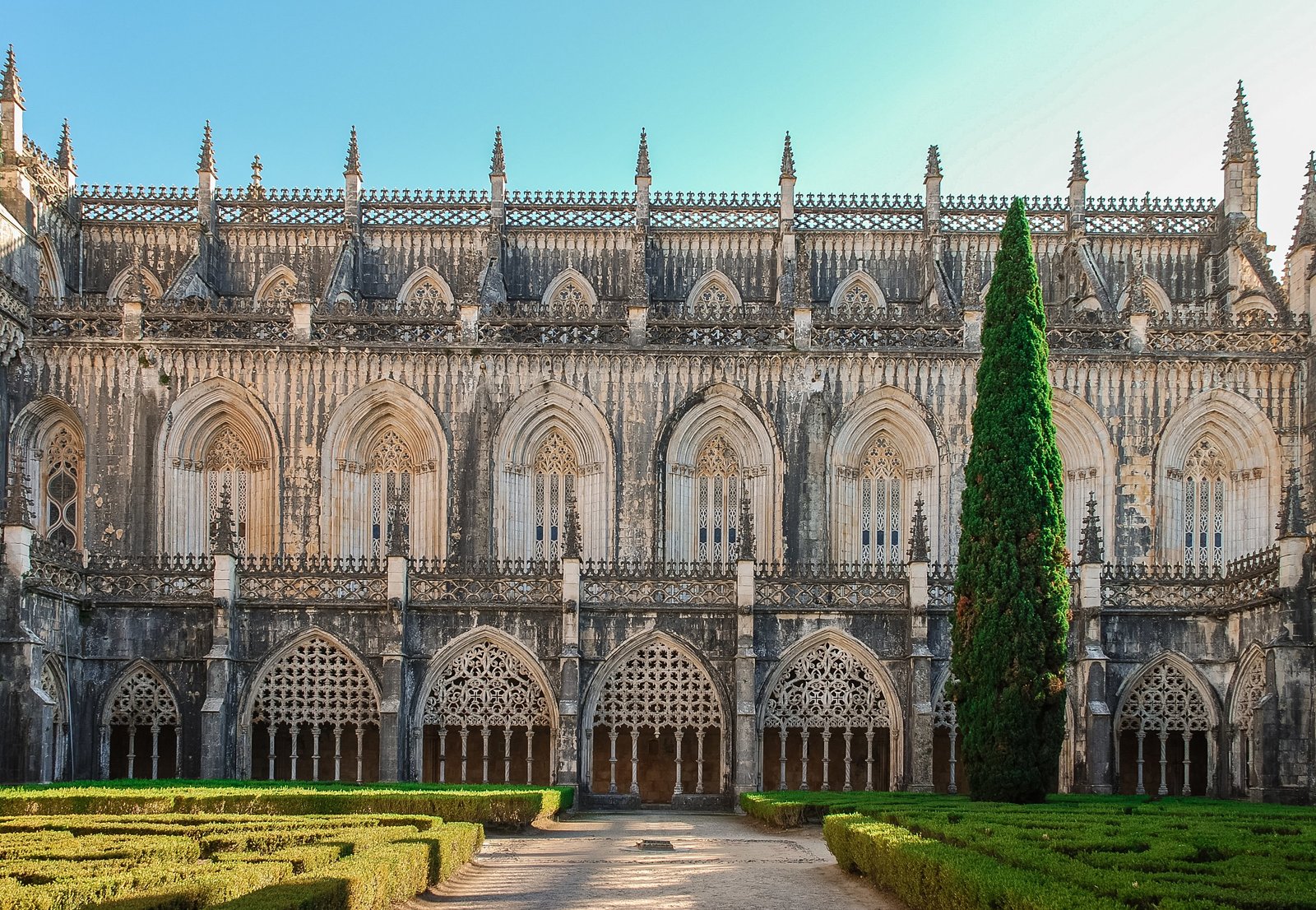 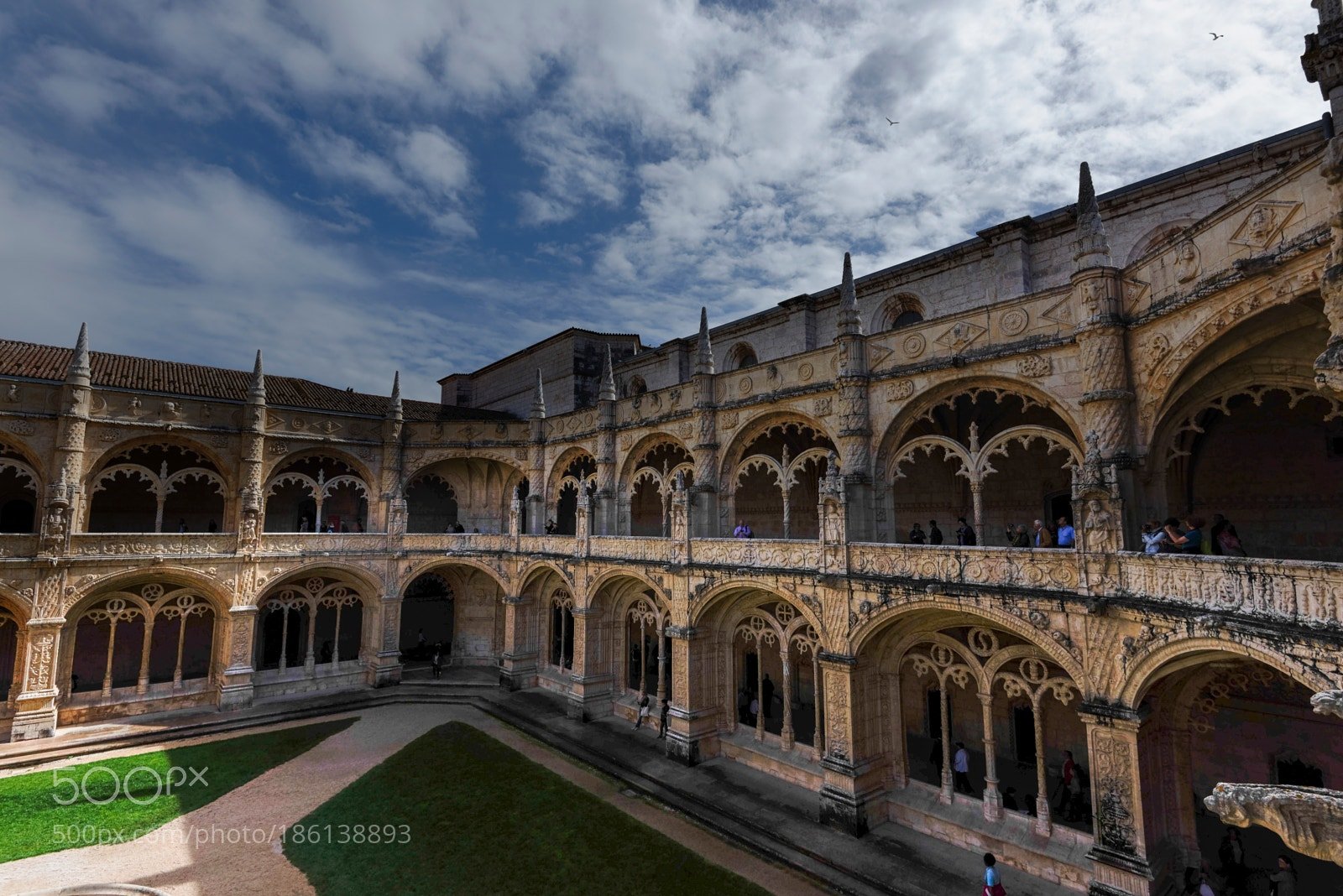 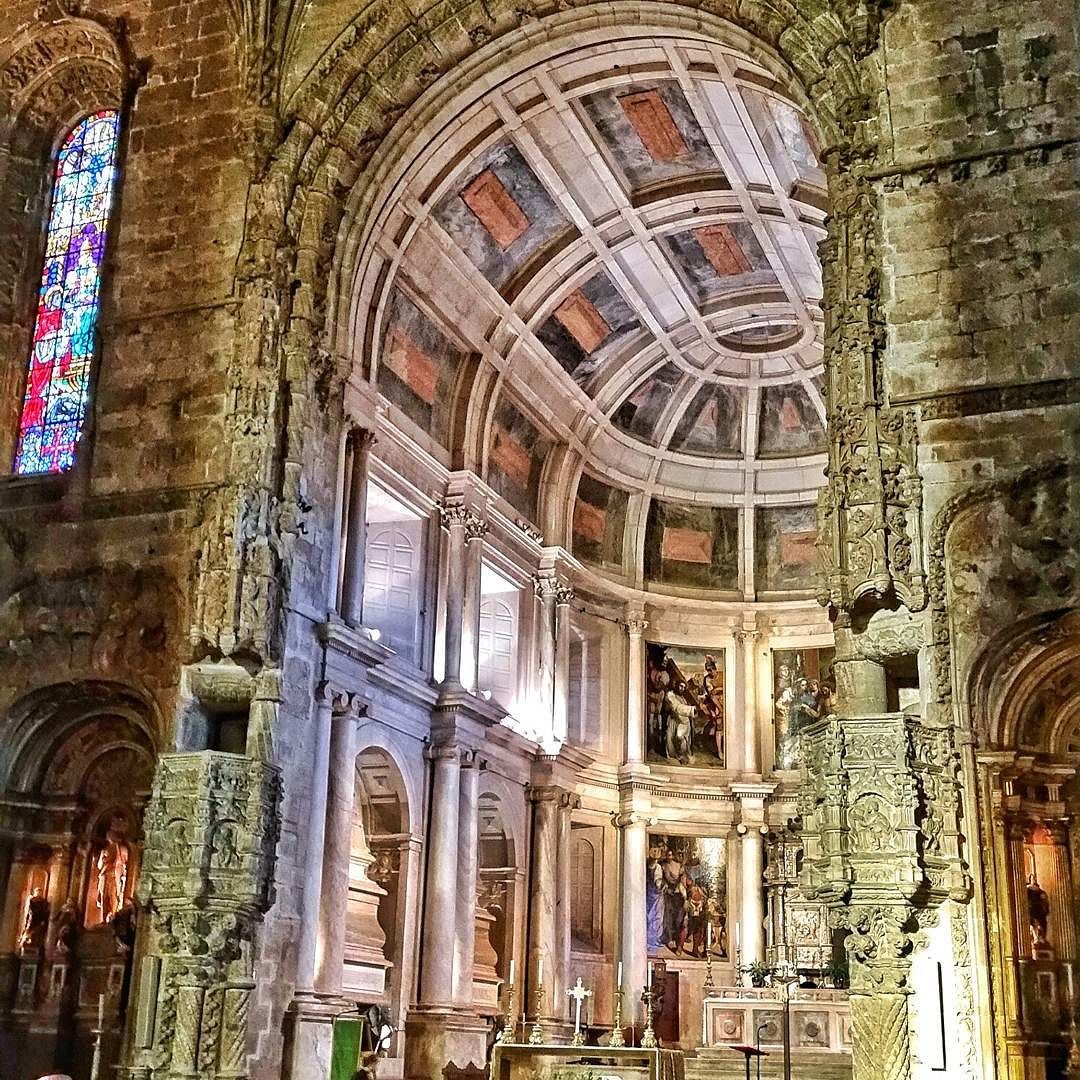 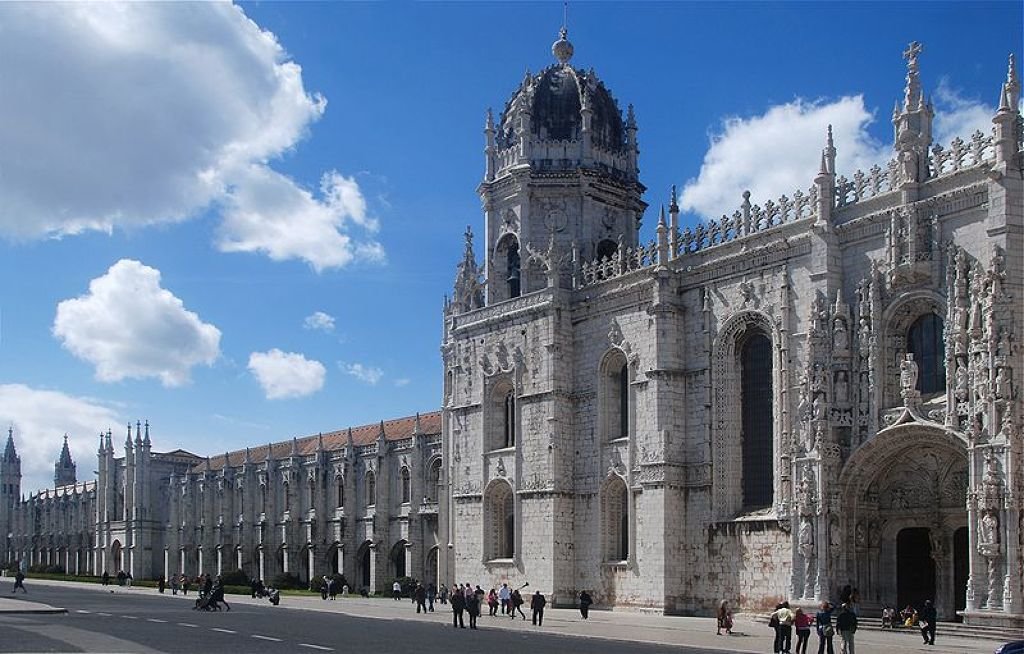 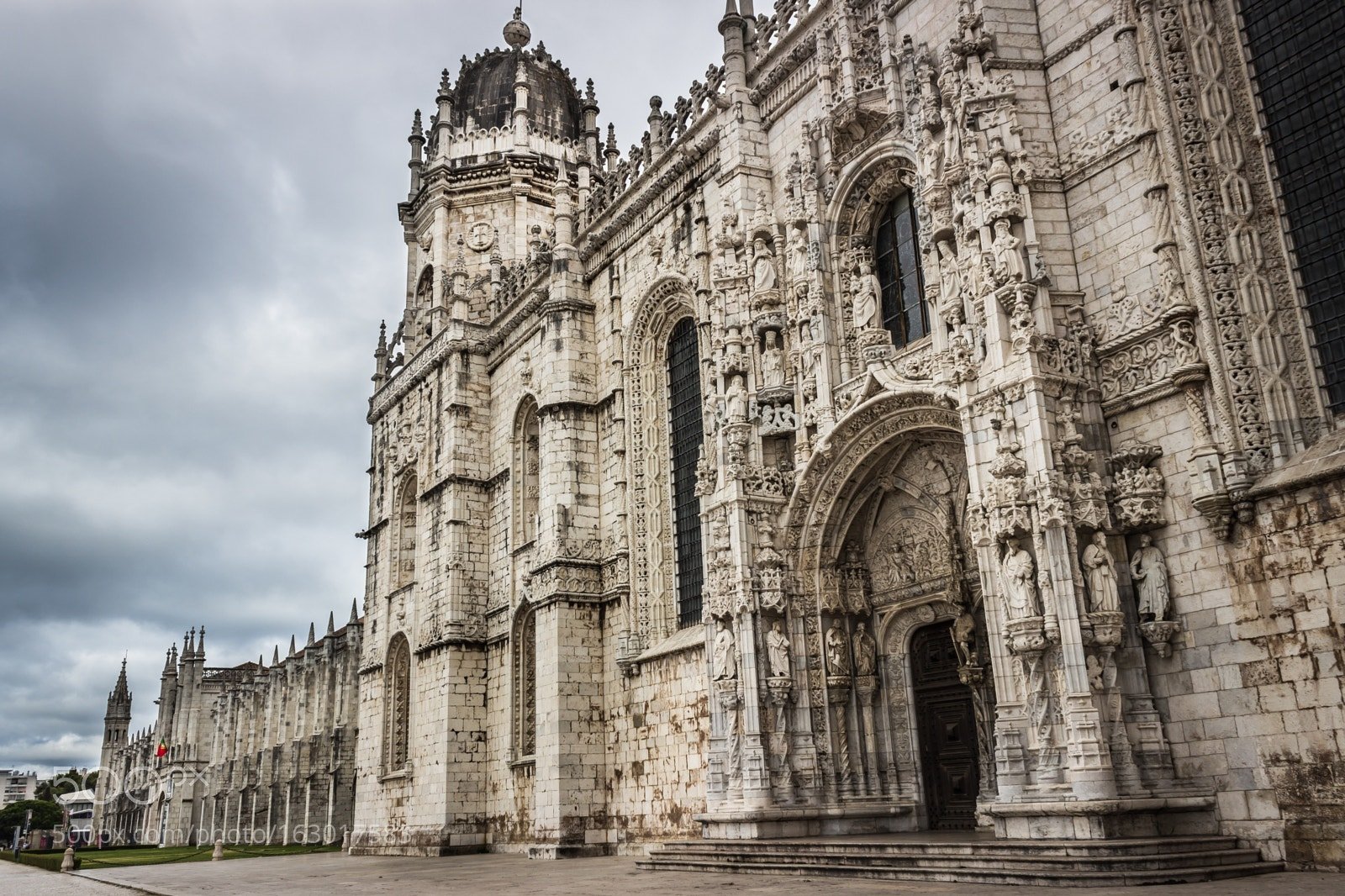 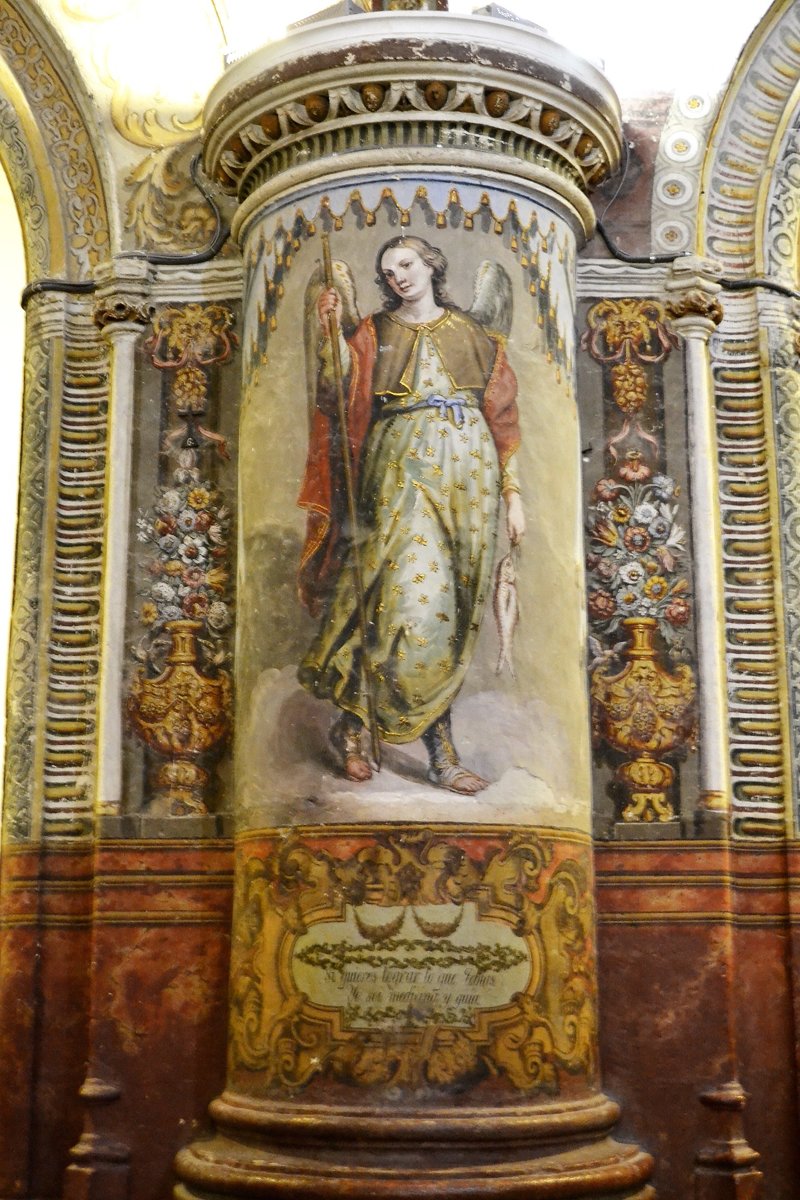 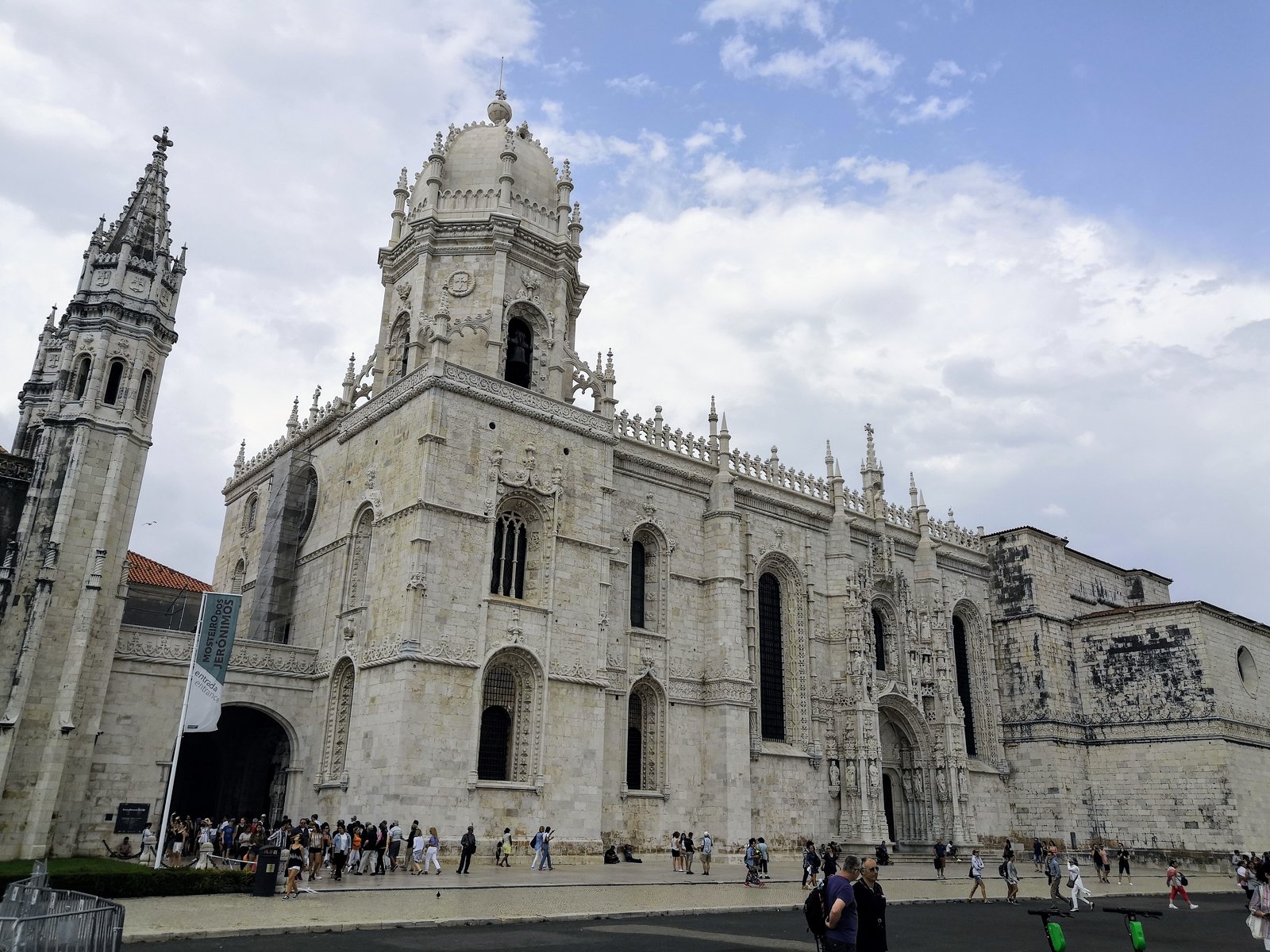 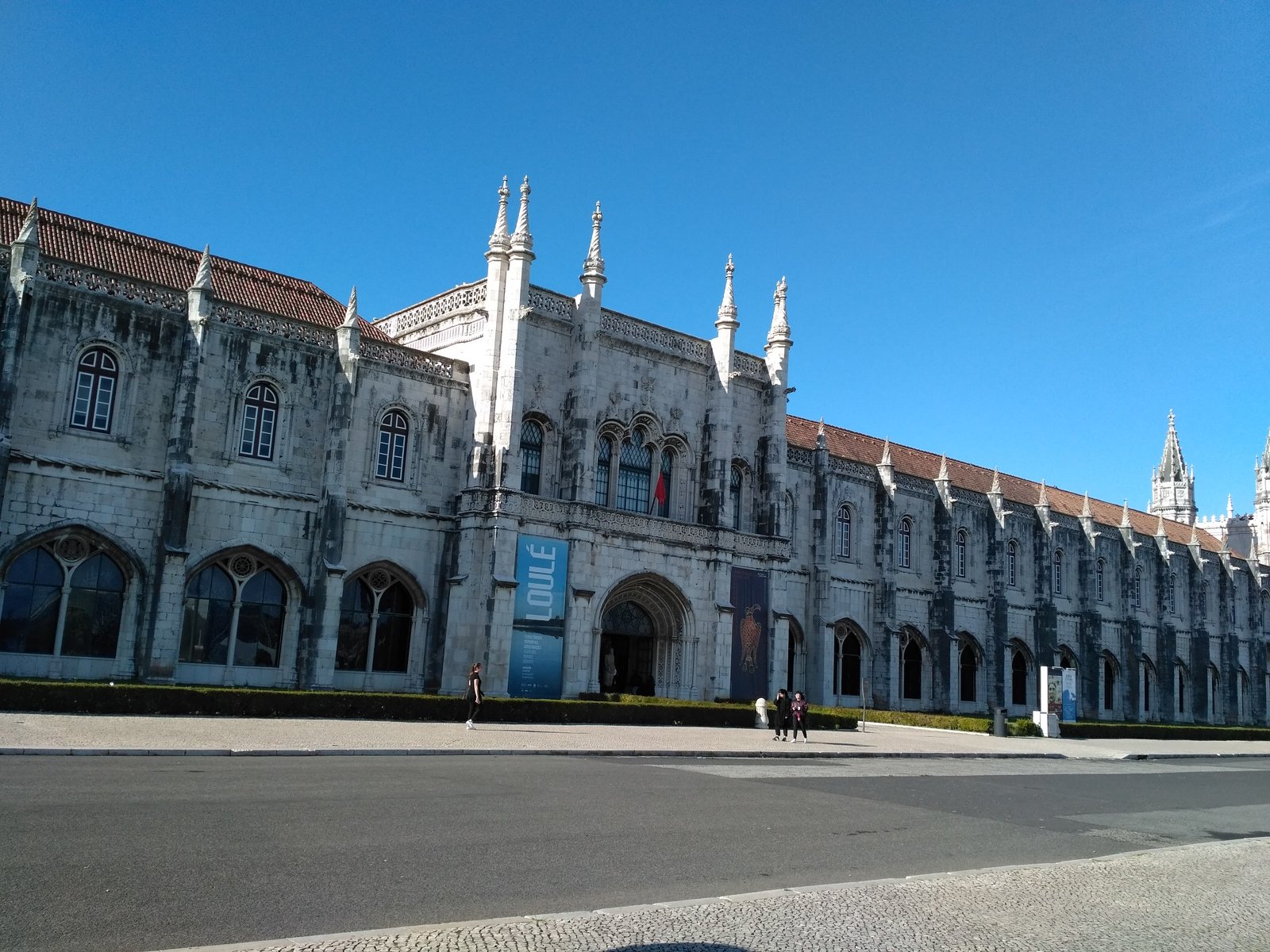 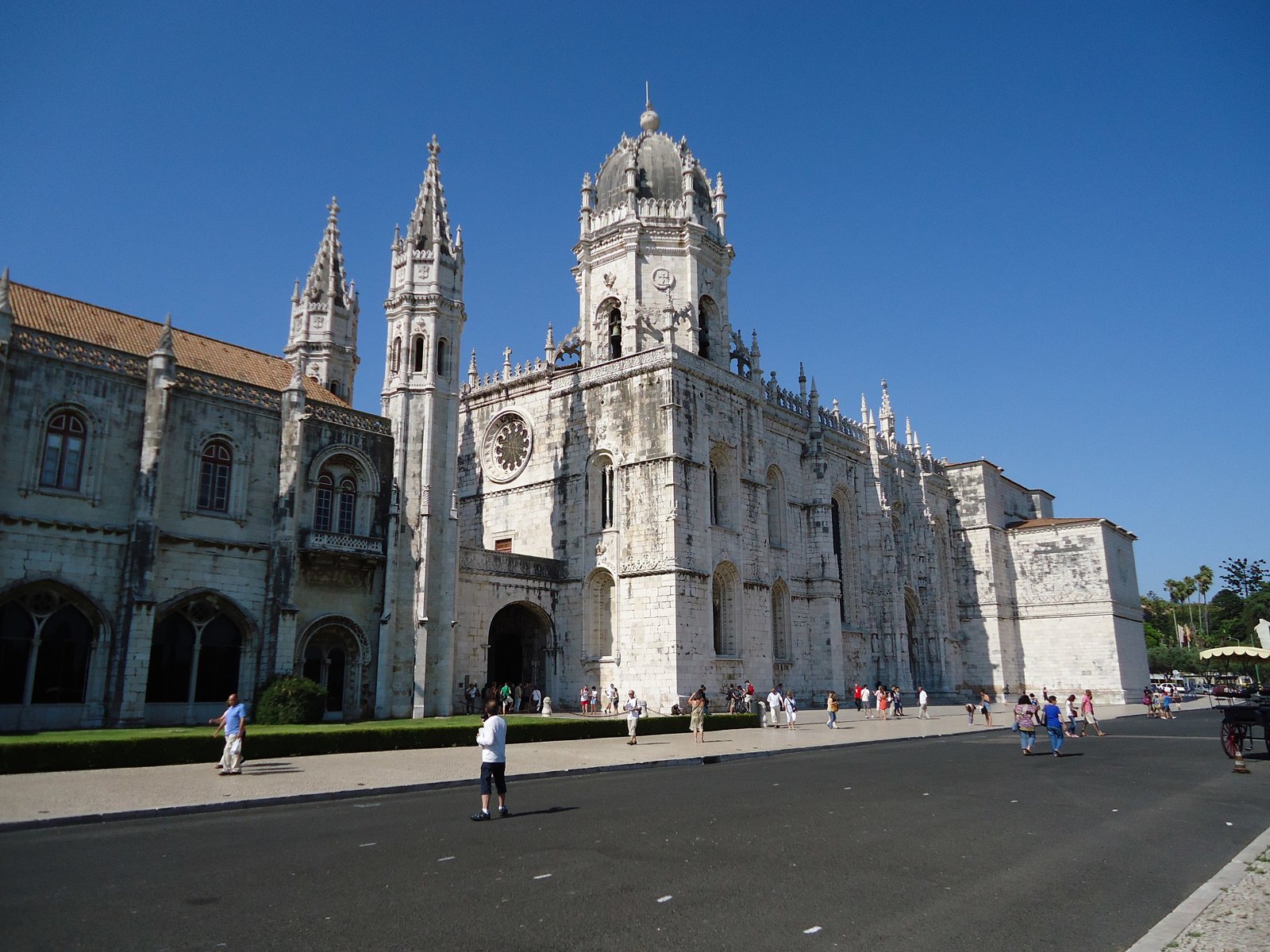 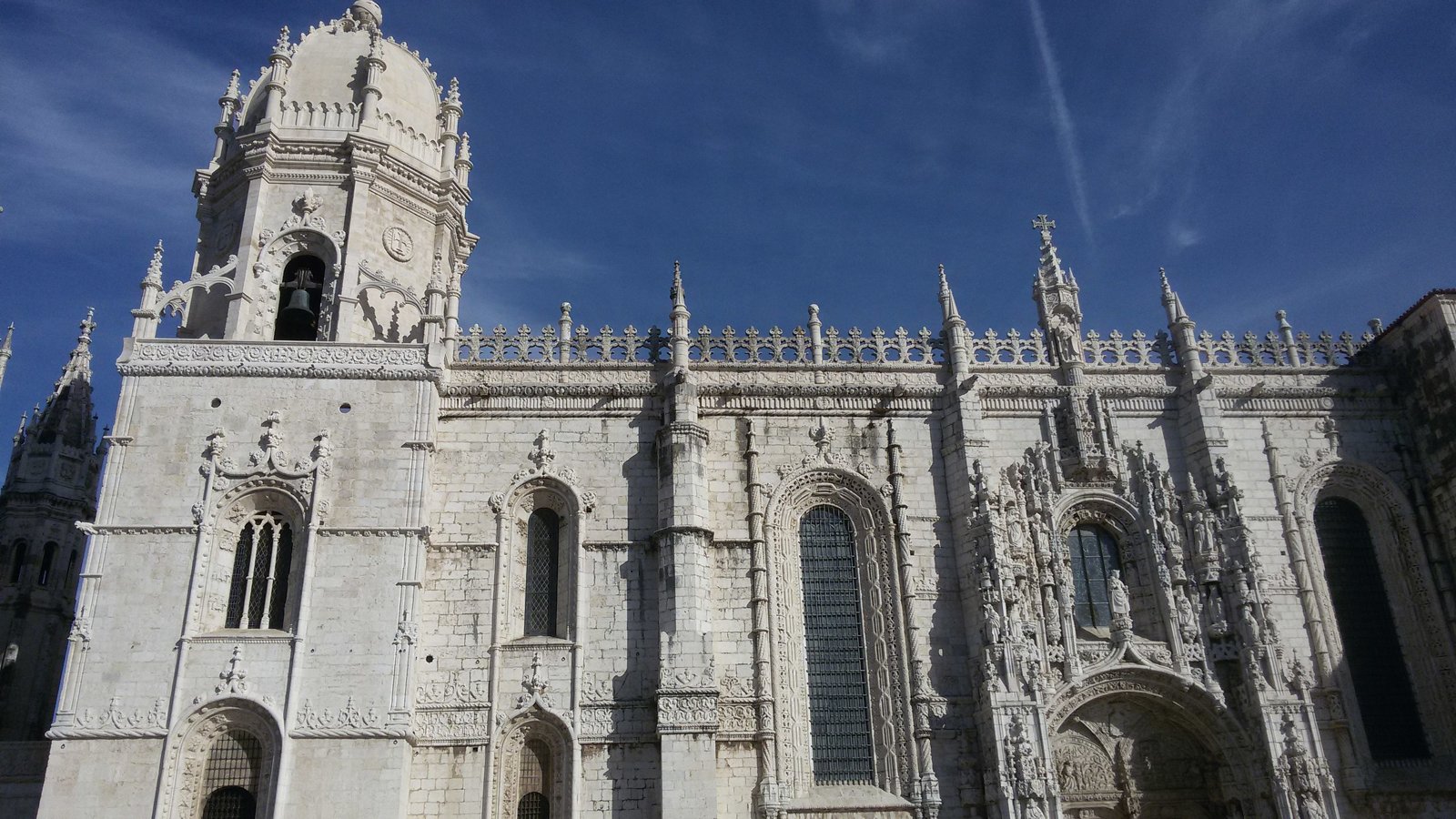