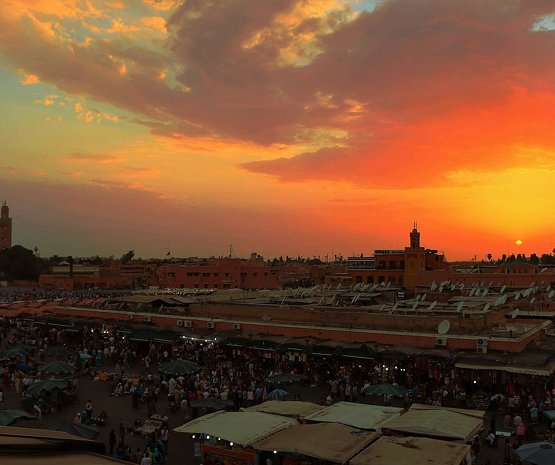 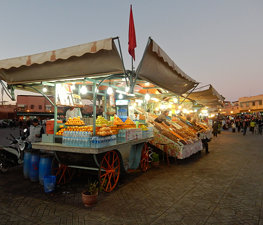 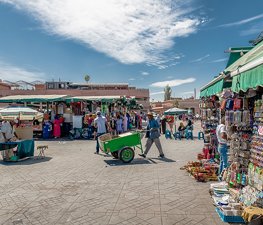 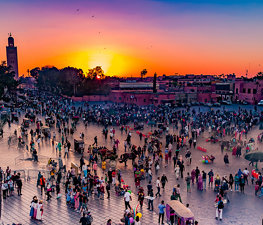 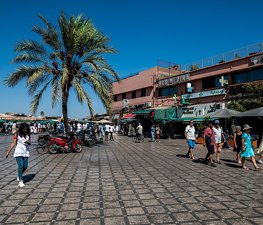 The origin of its name is unclear: Jemaa means "congregation" in Arabic, probably referring to a destroyed Almoravid mosque. Fanâʼ or finâʼ can mean "death" or "a courtyard, space in front of a building". "finâʼ in arabic commonly means "open area", straight translation would be "the gathering/congregation area". Other meanings could be "The assembly of death," or "The Mosque at the End of the World". Another explanation is that it refers to a mosque with a distinctive courtyard or square in front of it. A third translation is "assembly of the dead", referring to public executions on the plaza around 1050 AD.

Marrakesh was founded by the Almoravids 1070-1072. After a destructive struggle, it was falling to the Almohads in 1147. Following this, Jamaa el-Fna was renovated along with much of the city. The city walls were also extended by Abou Yacoub Youssef and particularly by Yacoub el Mansour from 1147-1158. The surrounding mosque, palace, hospital, parade ground and gardens around the edges of the marketplace were also overhauled, and the kasbah was fortified. Subsequently, with the fortunes of the city, Jamaa el Fna saw periods of decline and also renewal.

During the day it is predominantly occupied by orange juice stalls, water sellers with traditional leather water-bags and brass cups, youths with chained Barbary apes and snake charmers despite the protected status of these species under Moroccan law.

As the day progresses, the entertainment on offer changes: the snake charmers depart, and late in the day the square becomes more crowded, with Chleuh dancing-boys (it would be against custom for girls to provide such entertainment), story-tellers (telling their tales in Berber or Arabic, to an audience of locals), magicians, and peddlers of traditional medicines. As darkness falls, the square fills with dozens of food-stalls as the number of people on the square peaks.

The square is edged along one side by the Marrakesh souk, a traditional North African market catering both for the common daily needs of the locals, and for the tourist trade. On other sides are hotels and gardens and cafe terraces, and narrow streets lead into the alleys of the medina quarter.

Once a bus station, the place was closed to vehicle traffic in the early 2000s. The authorities are well aware of its importance to the tourist trade, and a strong but discreet police presence ensures the safety of visitors.

UNESCO Masterpiece of the Oral and Intangible Heritage of Humanity

The idea of the UNESCO project Masterpieces of the Oral and Intangible Heritage of Humanity came from people concerned about the Jamaa el Fna. The place is known for its active concentration of traditional activities by storytellers, musicians and performers, but it was threatened by economic development pressures. In fighting for the protection of traditions, the residents called for action on an international level, to recognize the need for the protection of such places — termed "cultural spaces" — and other popular and traditional forms of cultural expression.

UNESCO encourages communities to identify, document, protect, promote and revitalize such heritage. The UNESCO label aims to raise awareness about the importance of oral and intangible heritage as an essential component of cultural diversity.

Shortly before noon on April 28, 2011, a blast originating in a cafe in the square killed 17 people and injured another 25. Initial reports blamed an accidental gas explosion, but officials later blamed "criminals" and "terrorists".

Stacy Bo Bacy
The main square and market place in Marrakesh's medina quarter (old city). Tons of fun things to see. Stay away from the henna ladies, snake charmers, and monkeys. Haggling is a game; enjoy it!

Evan Weinman
Snake charmers, dancers, live music, open markets, and lots of food. This place has it all and it's a lot of fun. Be prepared to have a thicker skin as people will try to sell you everything.

Wael Hazzazi
Cool place to just walk around, day or night. It can get really crowded though and you will be hassled for tips frequently. But you have to come at least once and walk around.

Noah Weiss
Fresh orange juice for 4 dirham during the day, street performers and sculptures and outdoor eating by night. The heart of Marrakech for over a century.

Jeffrey Kao
Ignore the aggressive merchants and sit at the stalls where everybody speaks Arabic. Also try to avoid later at night and less crowded stalls where food has been stagnating.

Julia Körffer
Worth checking it out bit if you are easily getting annoyed by restaurant staff trying to get you into their place, skip the middle food stalls. We had good food at No. 30 and they were very friendly
Load more comments
foursquare.com
7.4/10
irishmet, Ros Orlov and 643,839 more people have been here
I've been here
Add to wishlist

The Ben Youssef Madrasa was an Islamic college in Marrakesh, Morocco, 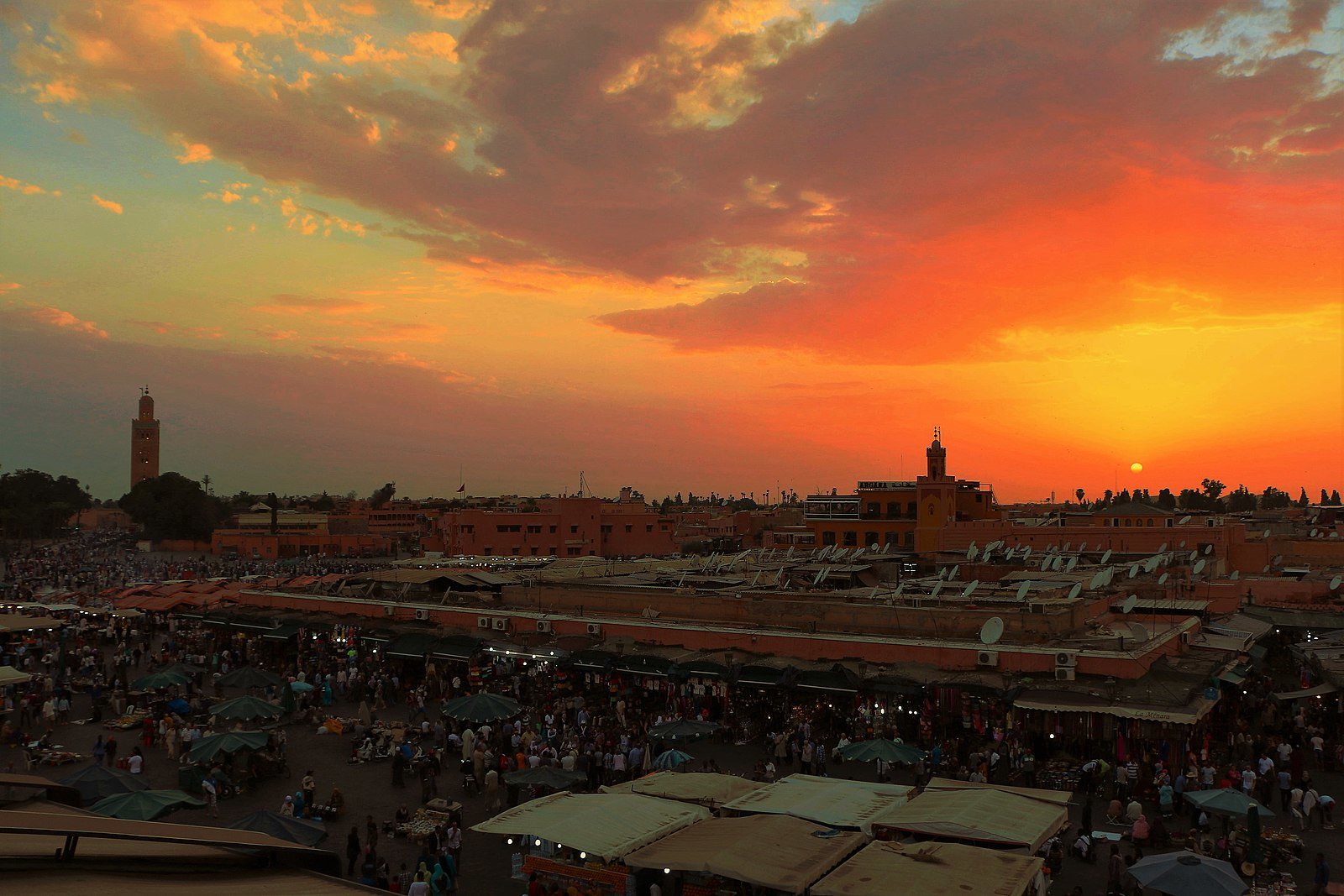 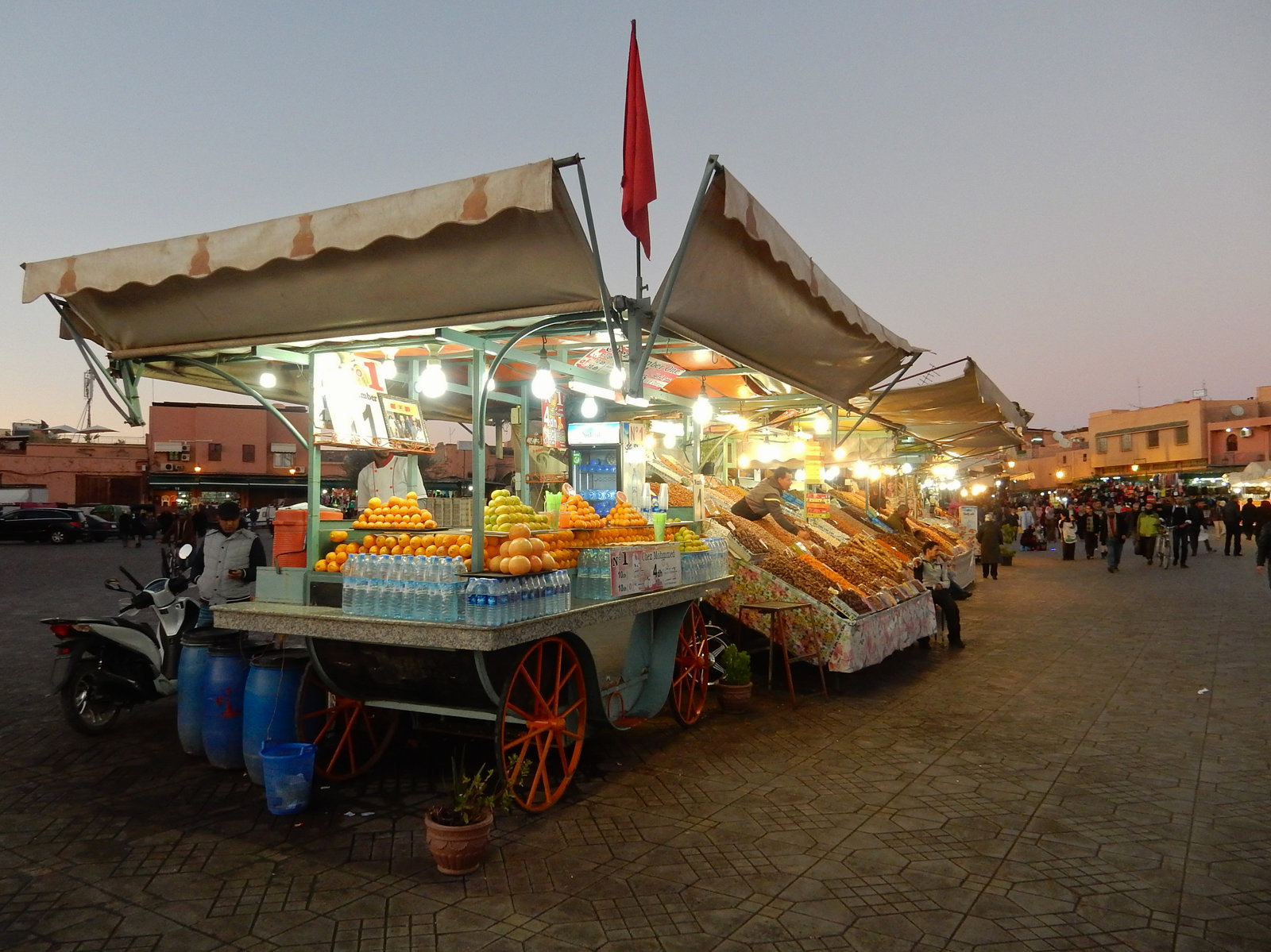 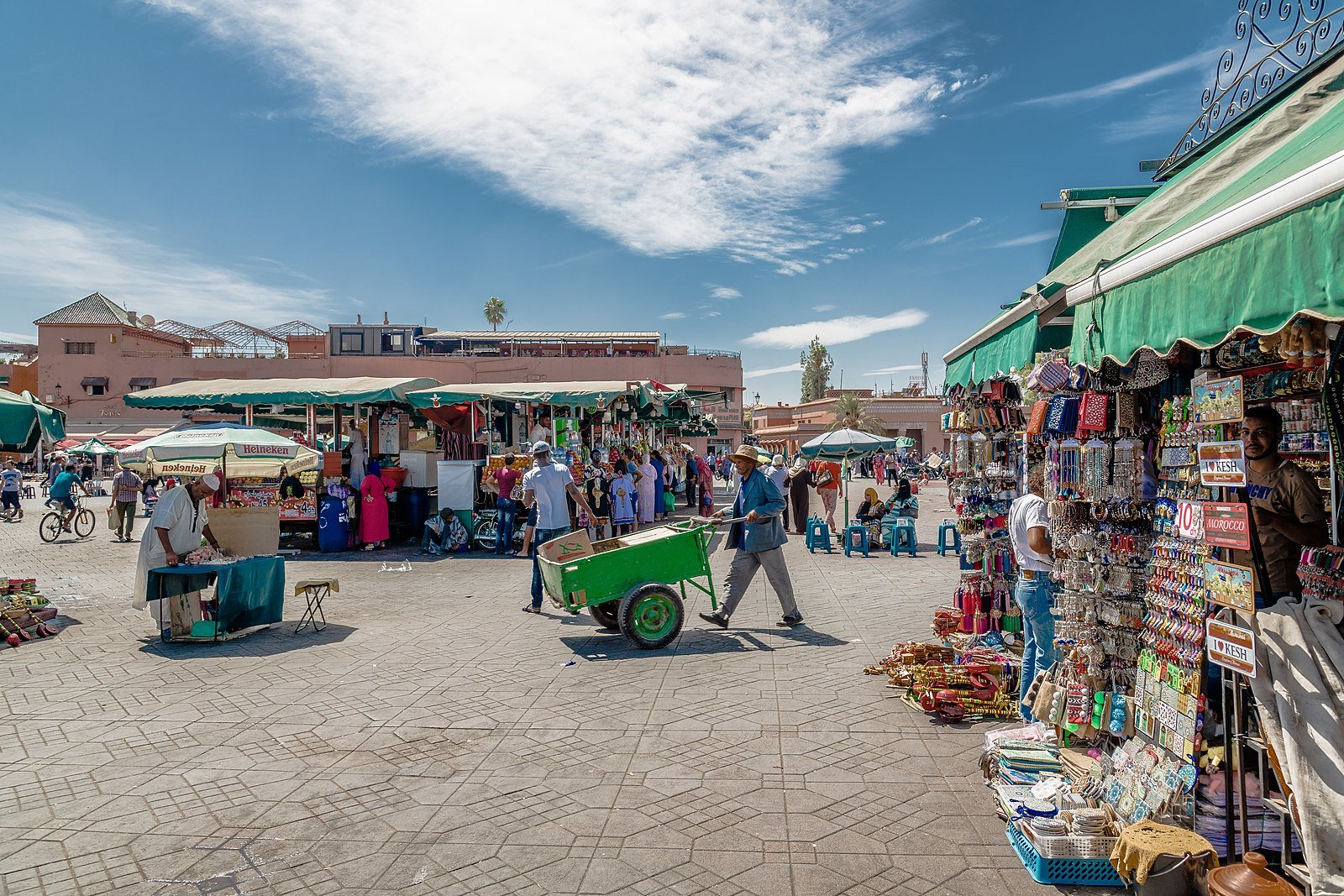 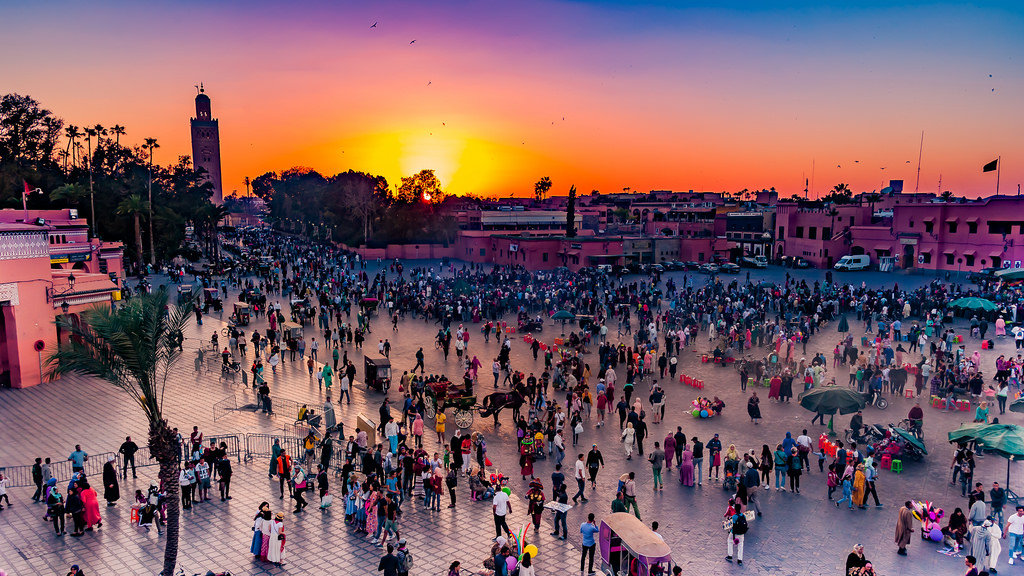 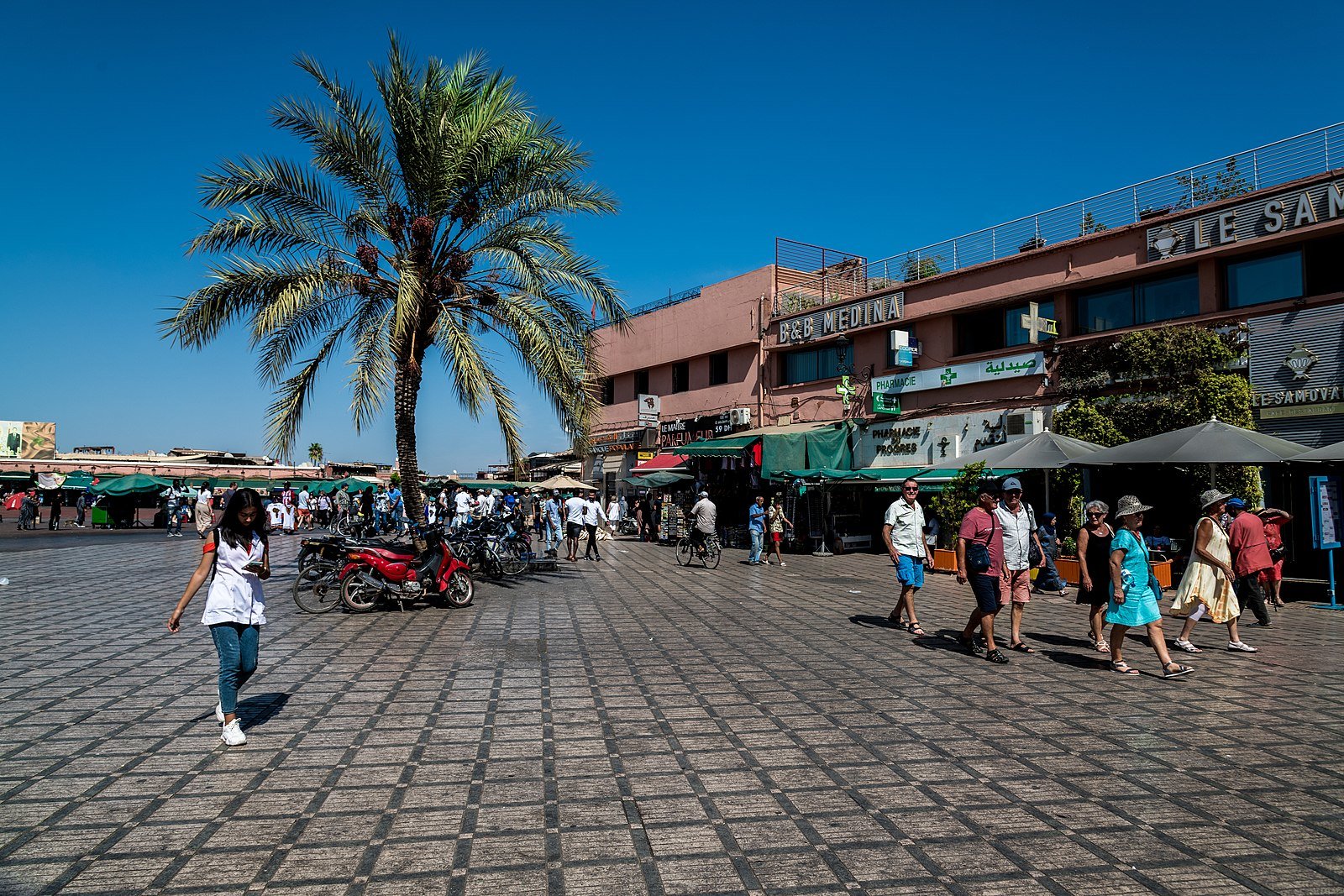 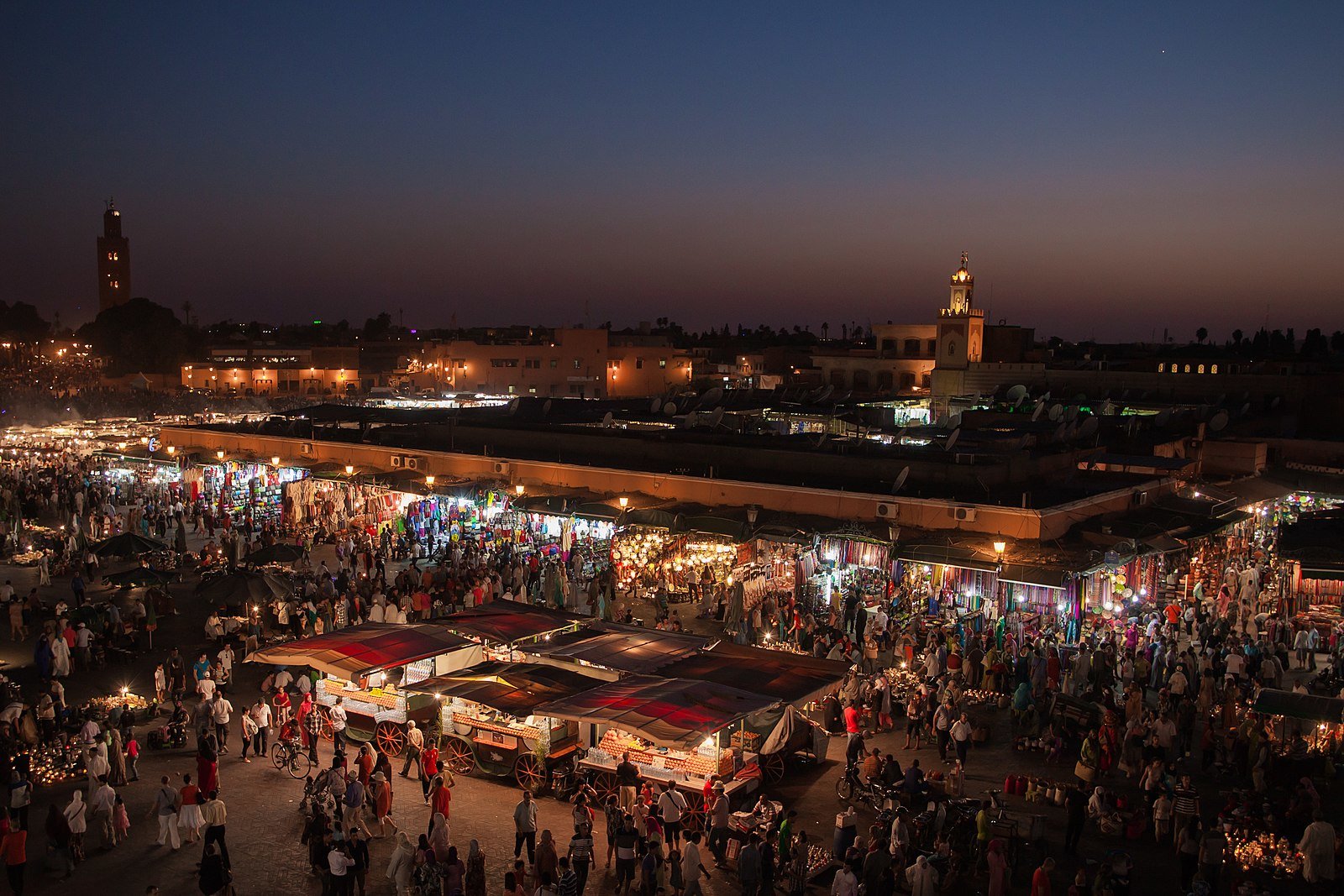 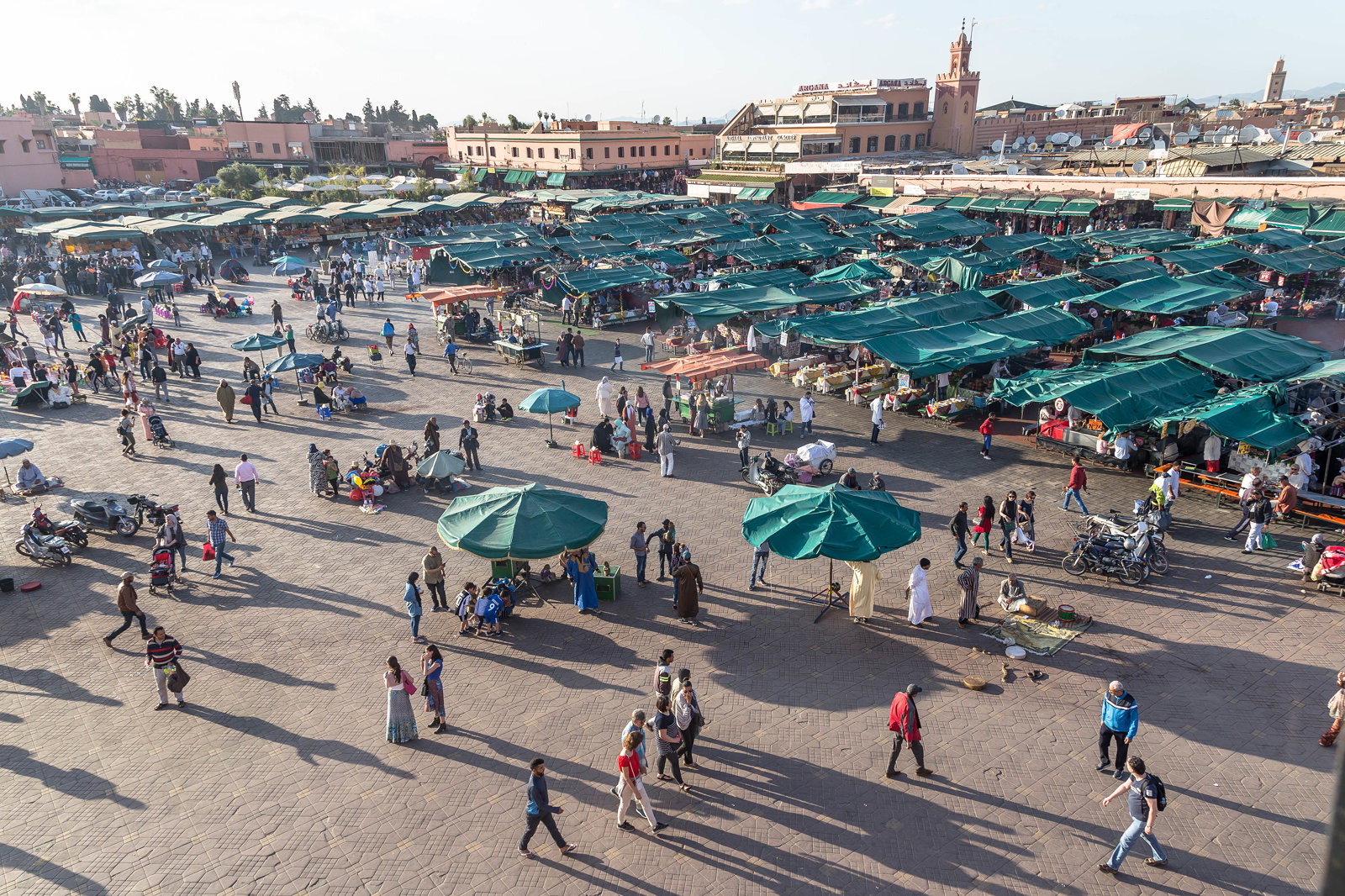 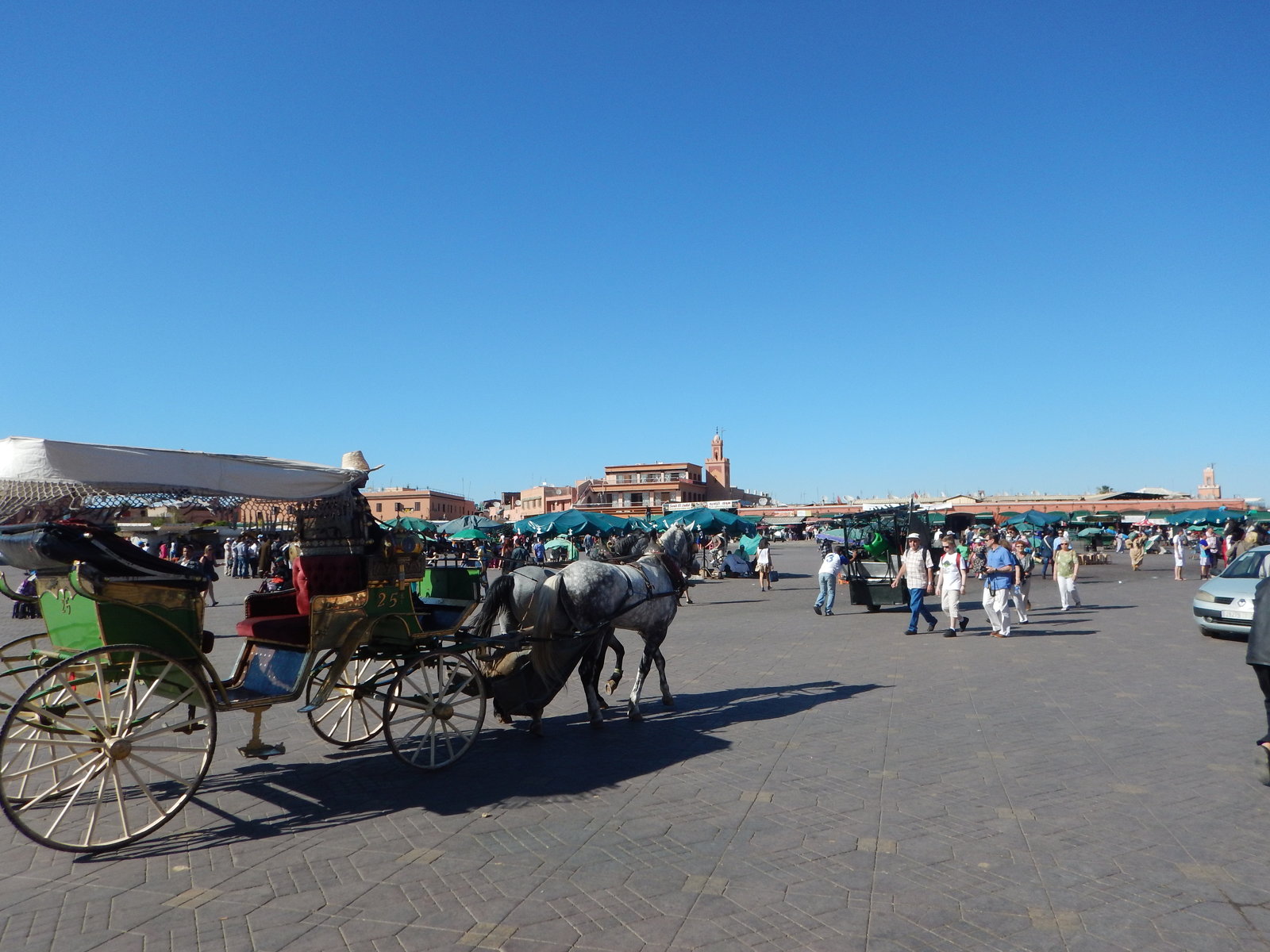 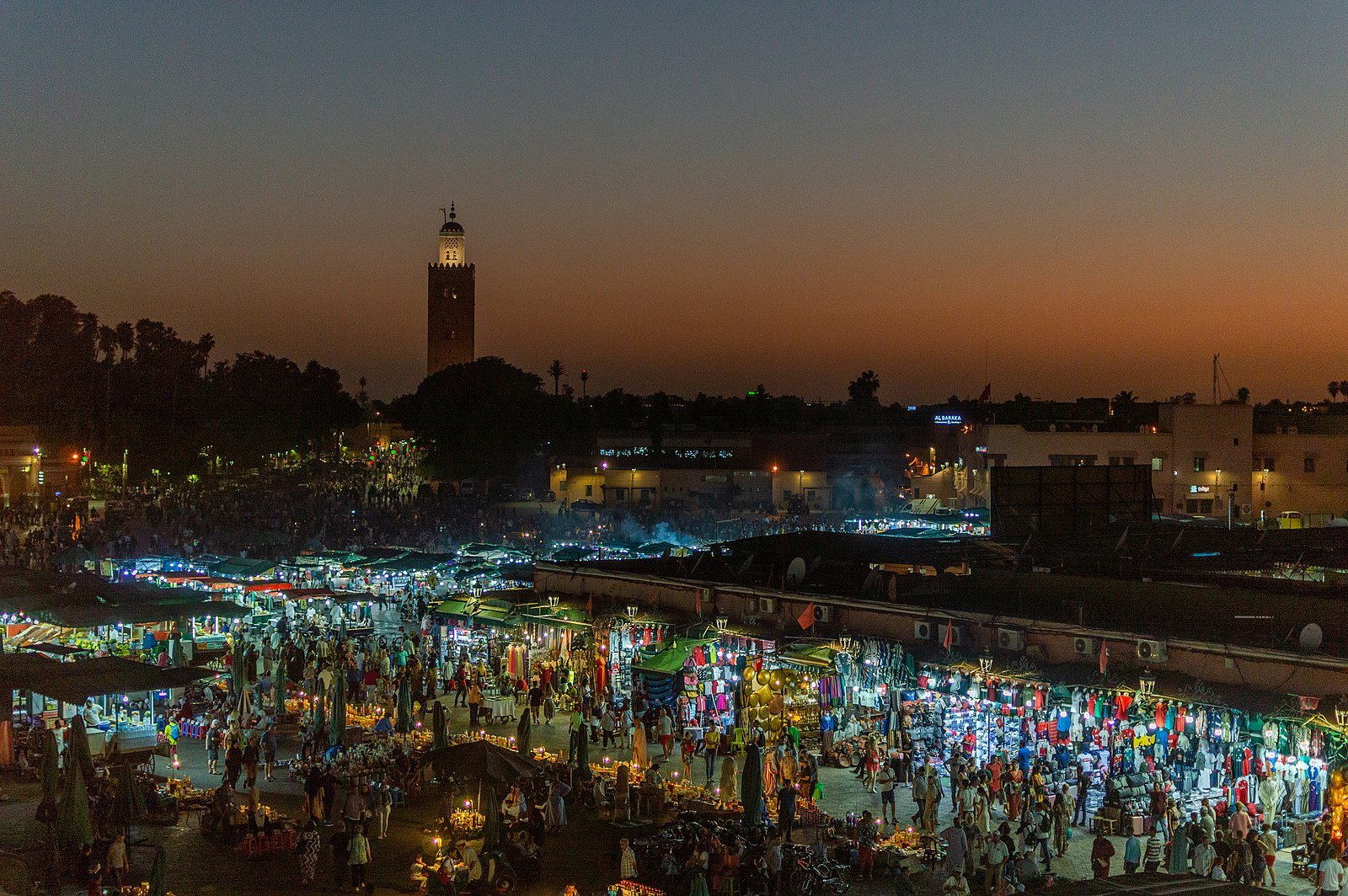 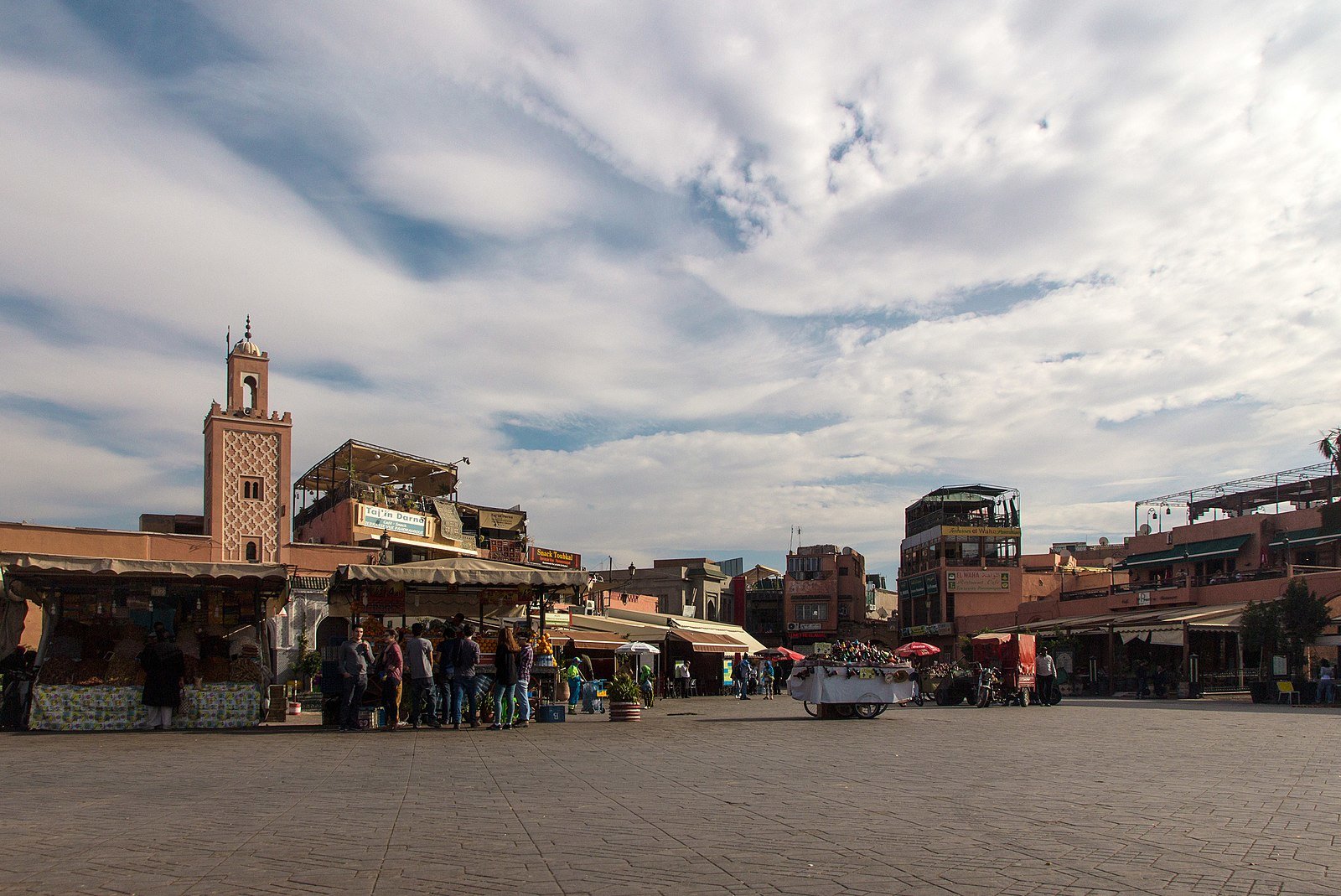 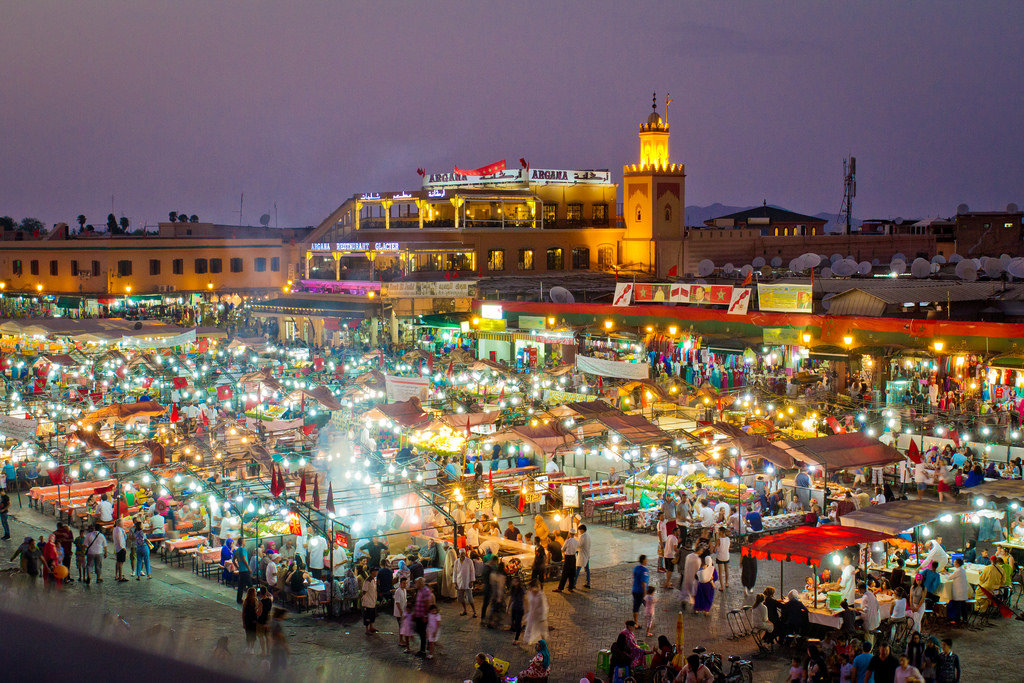 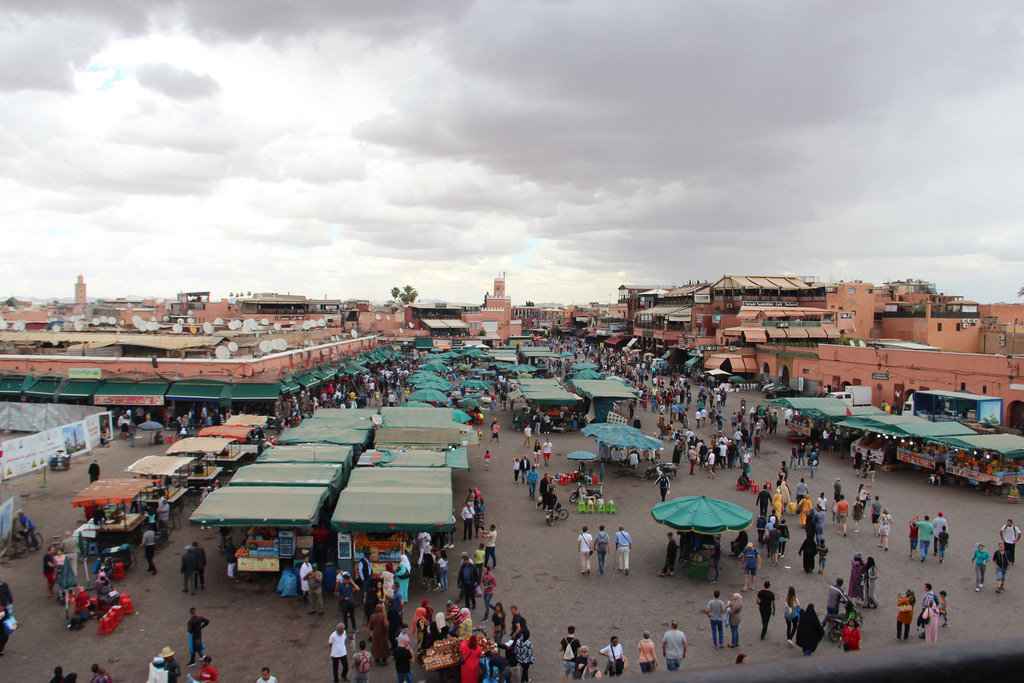 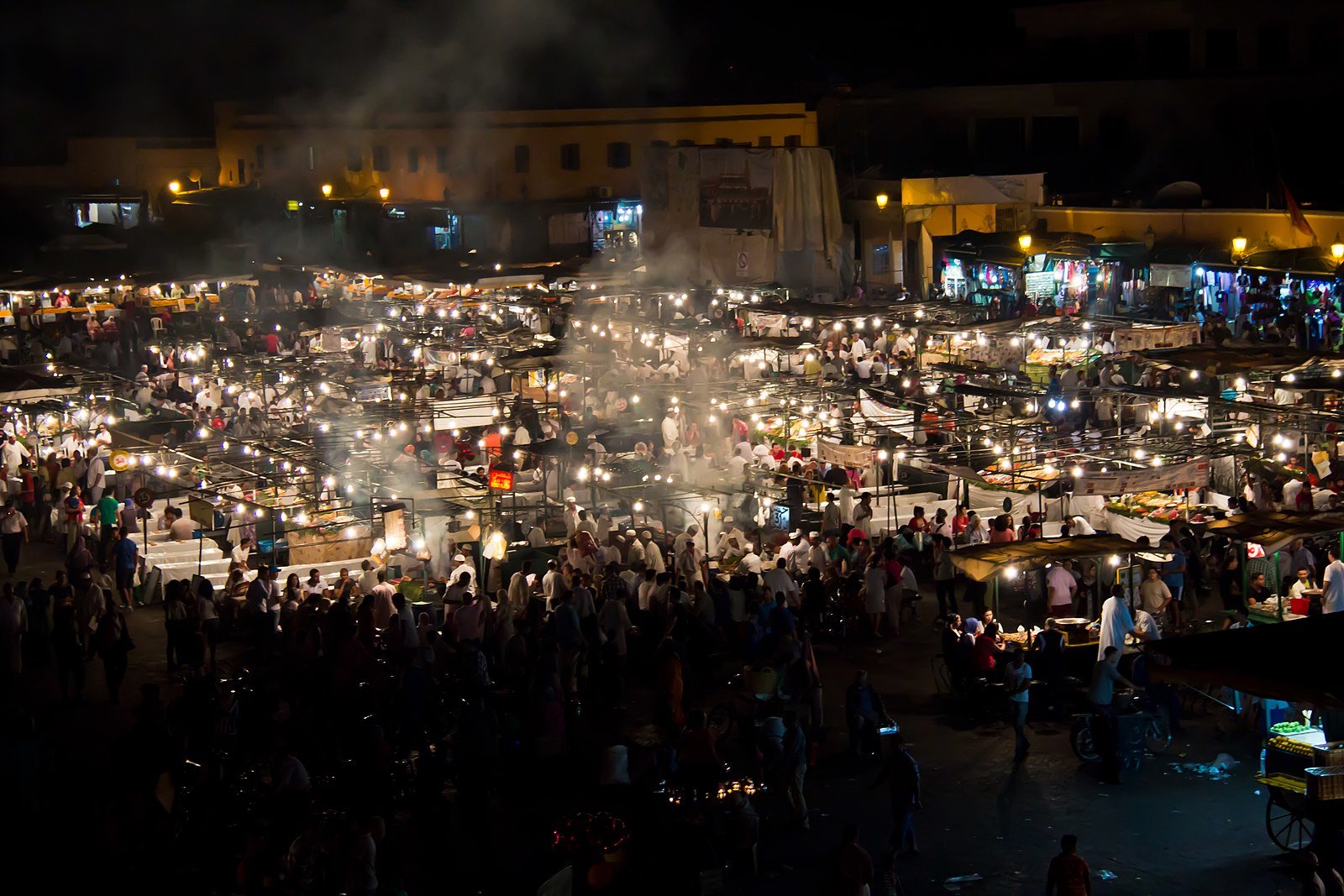 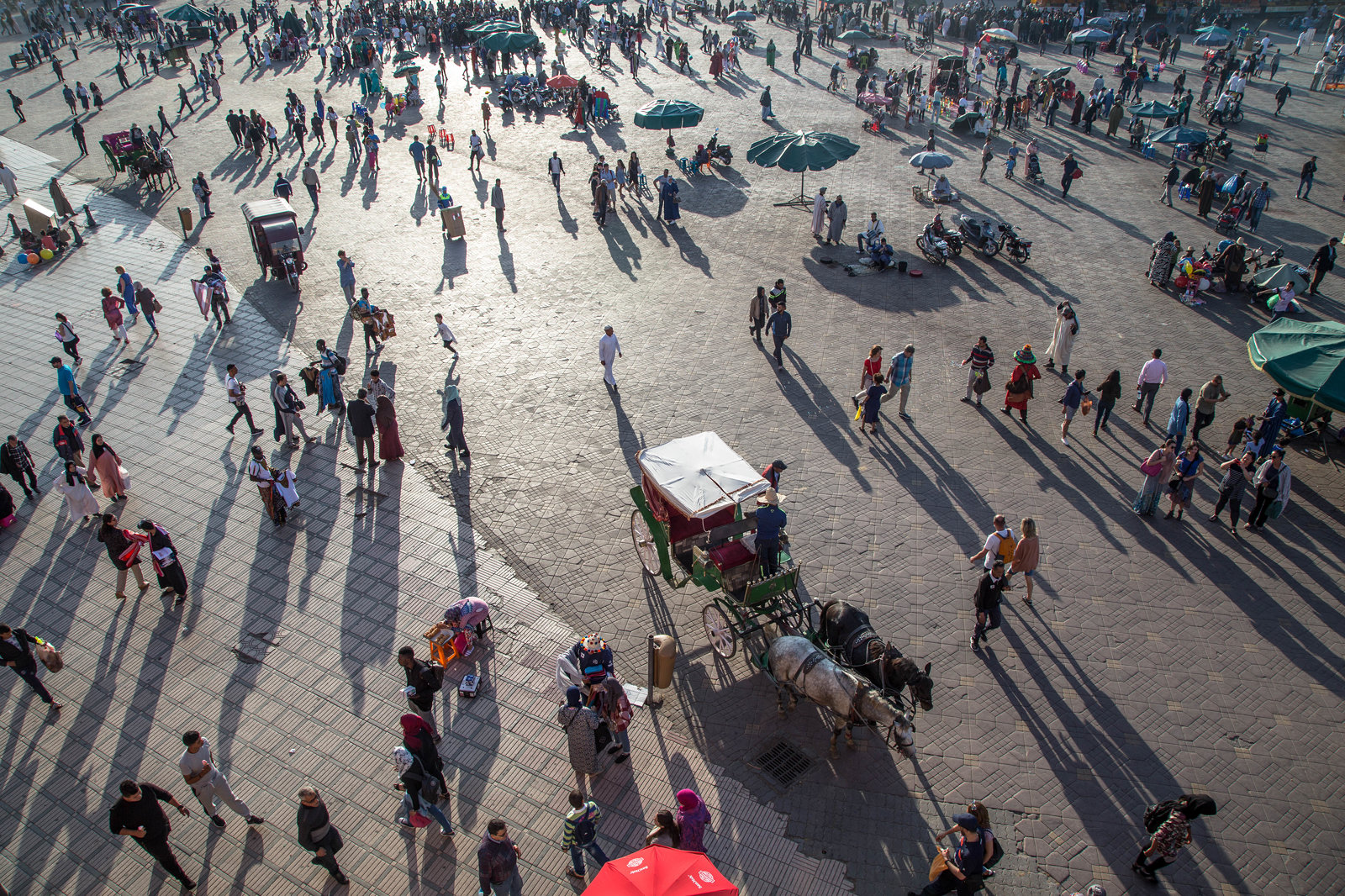 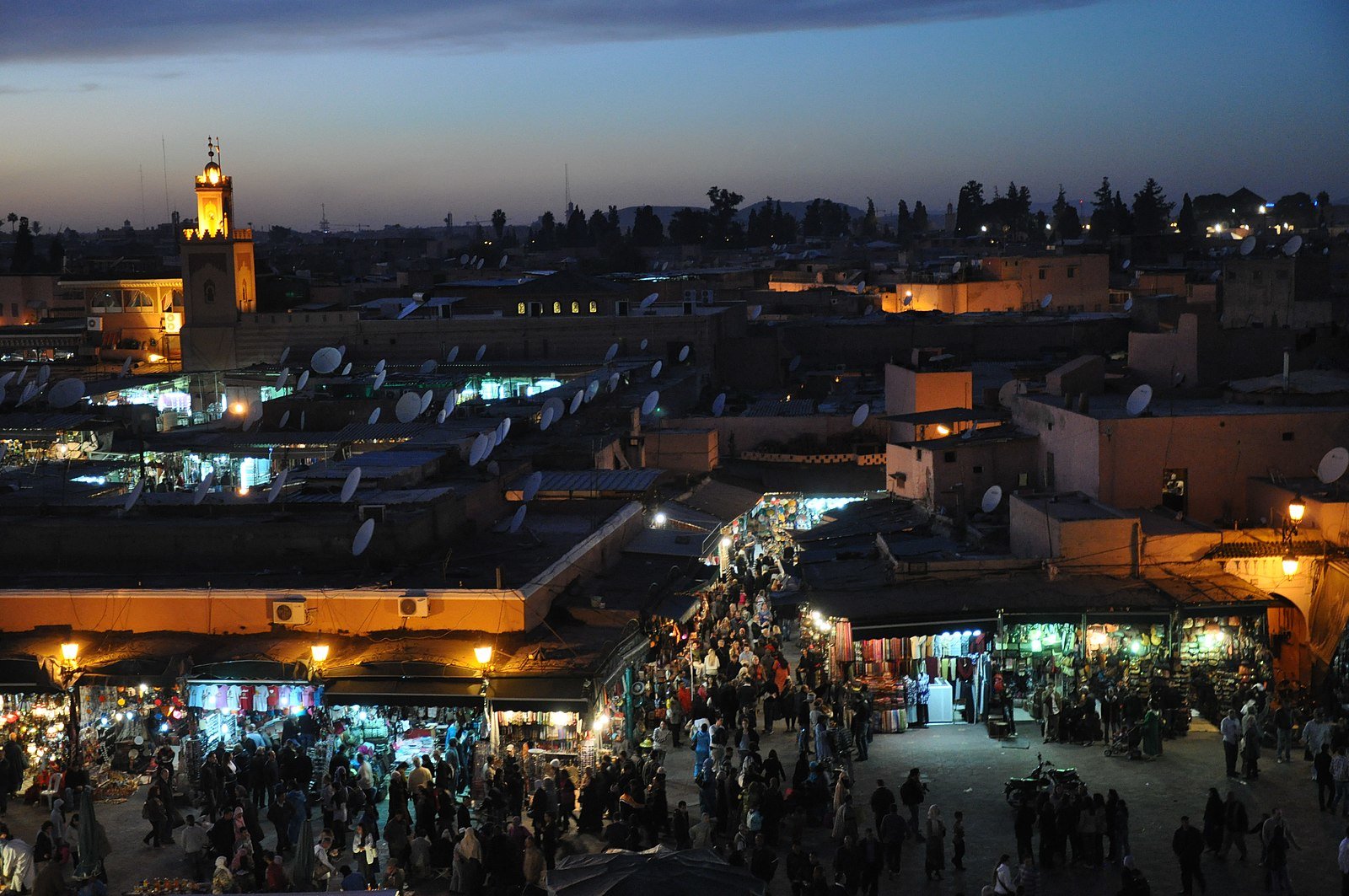 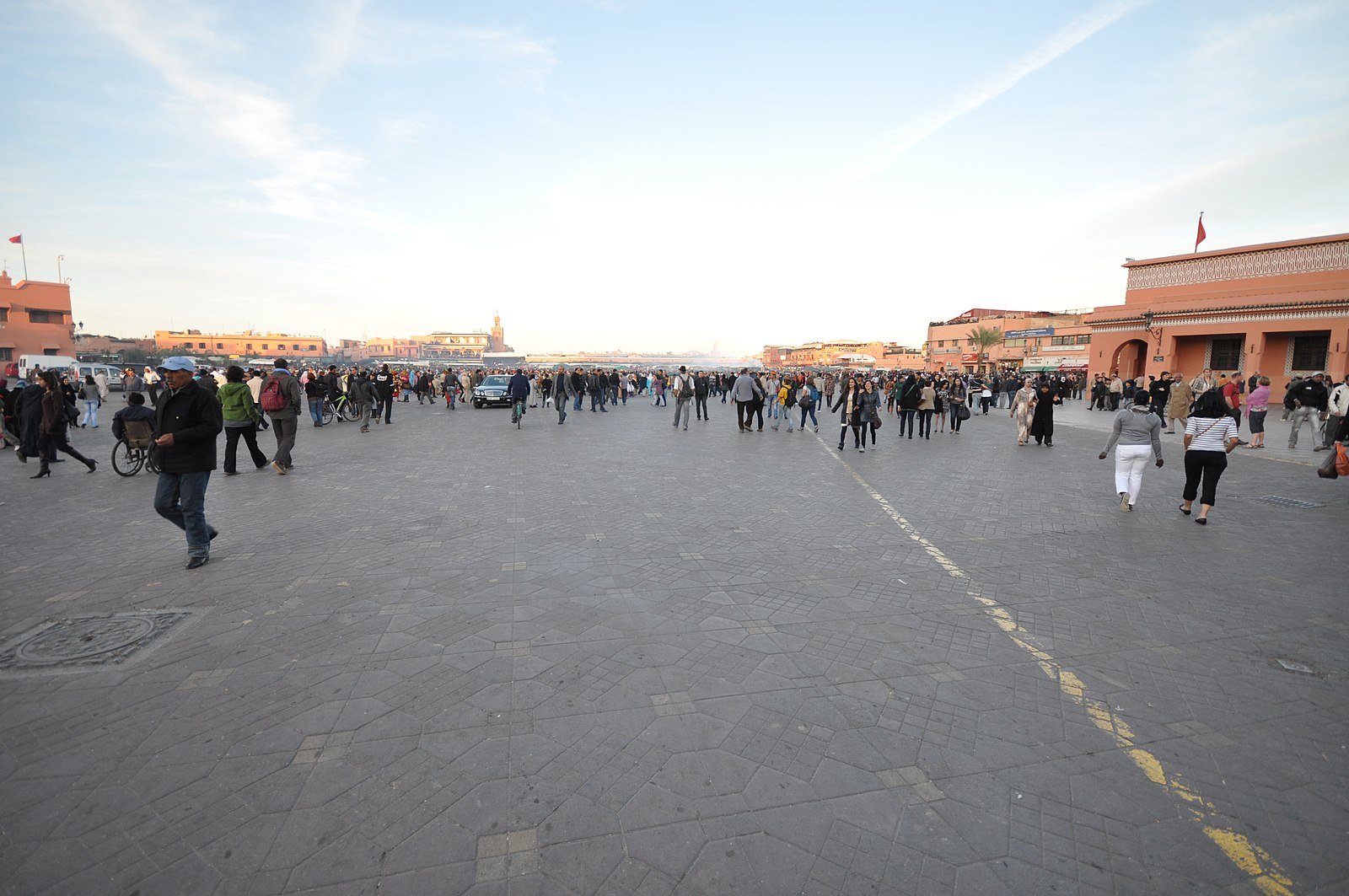 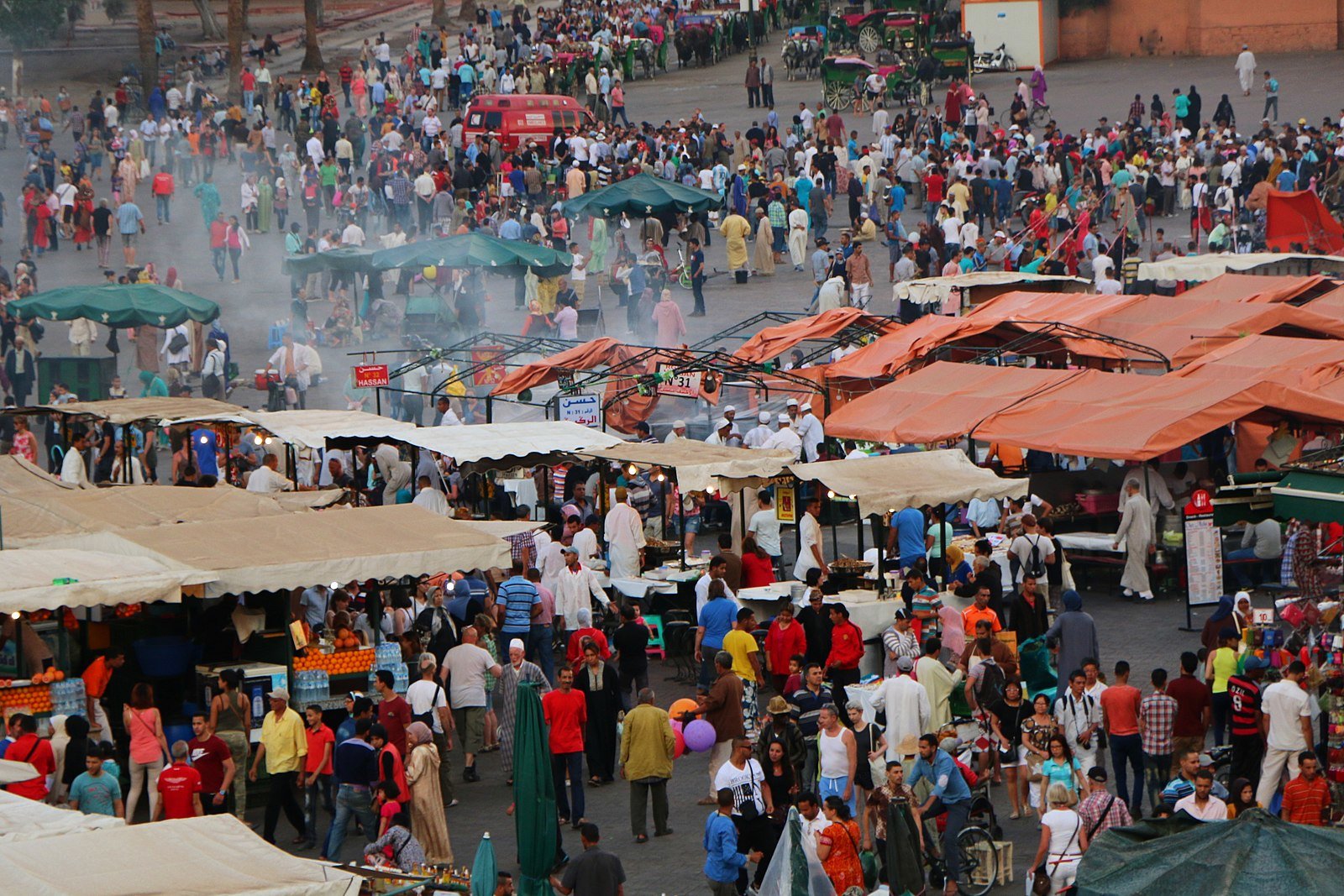 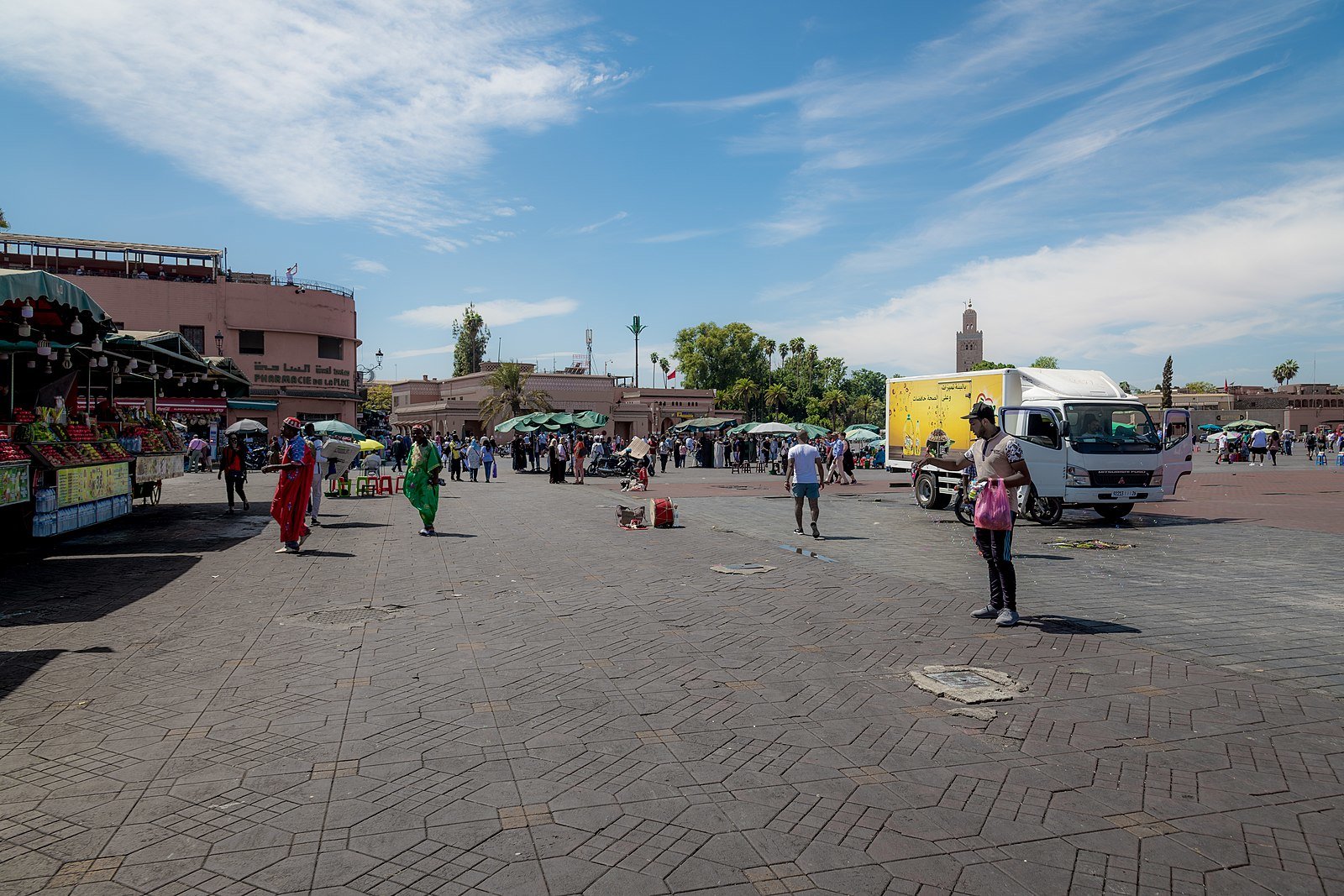 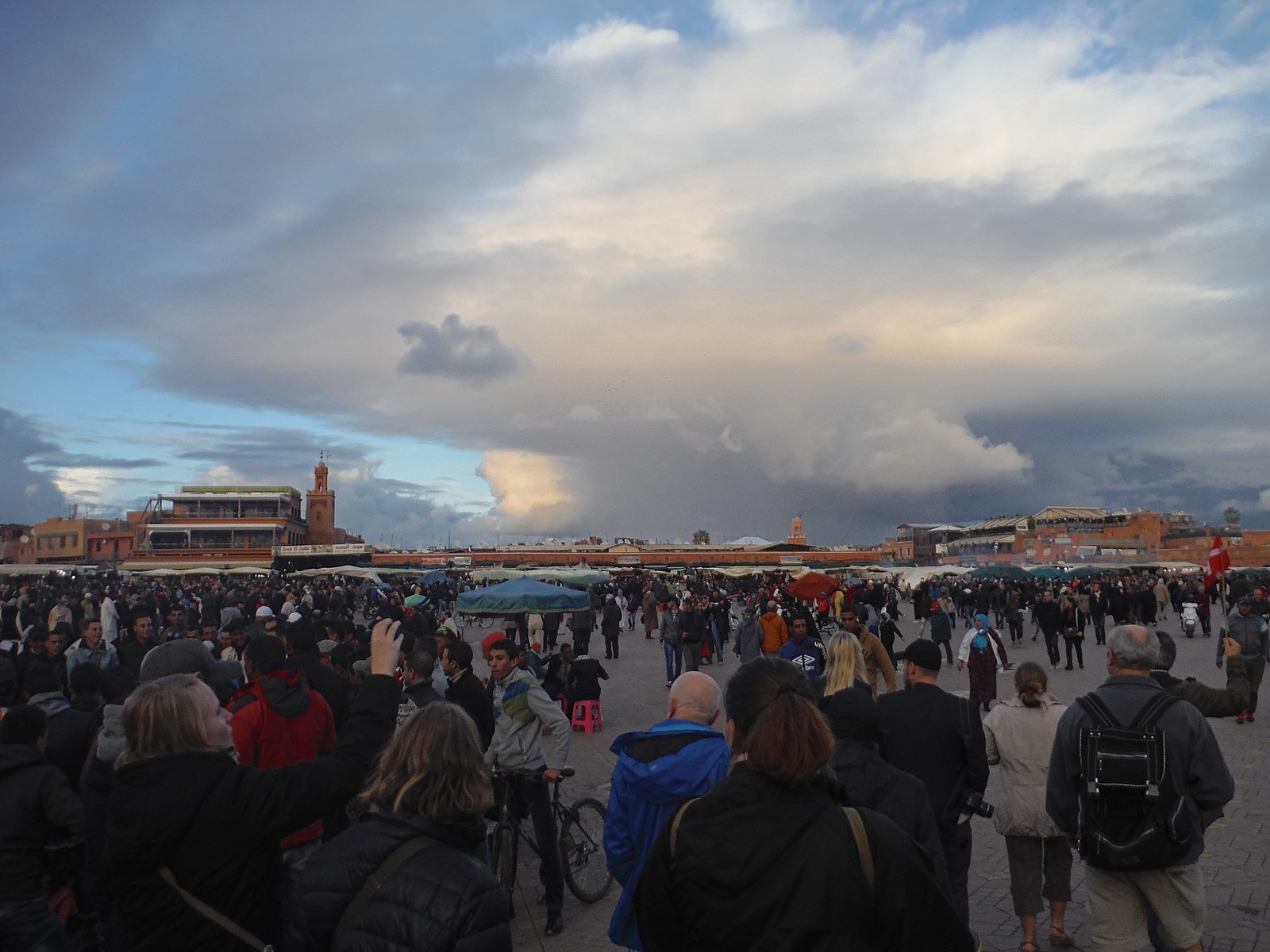 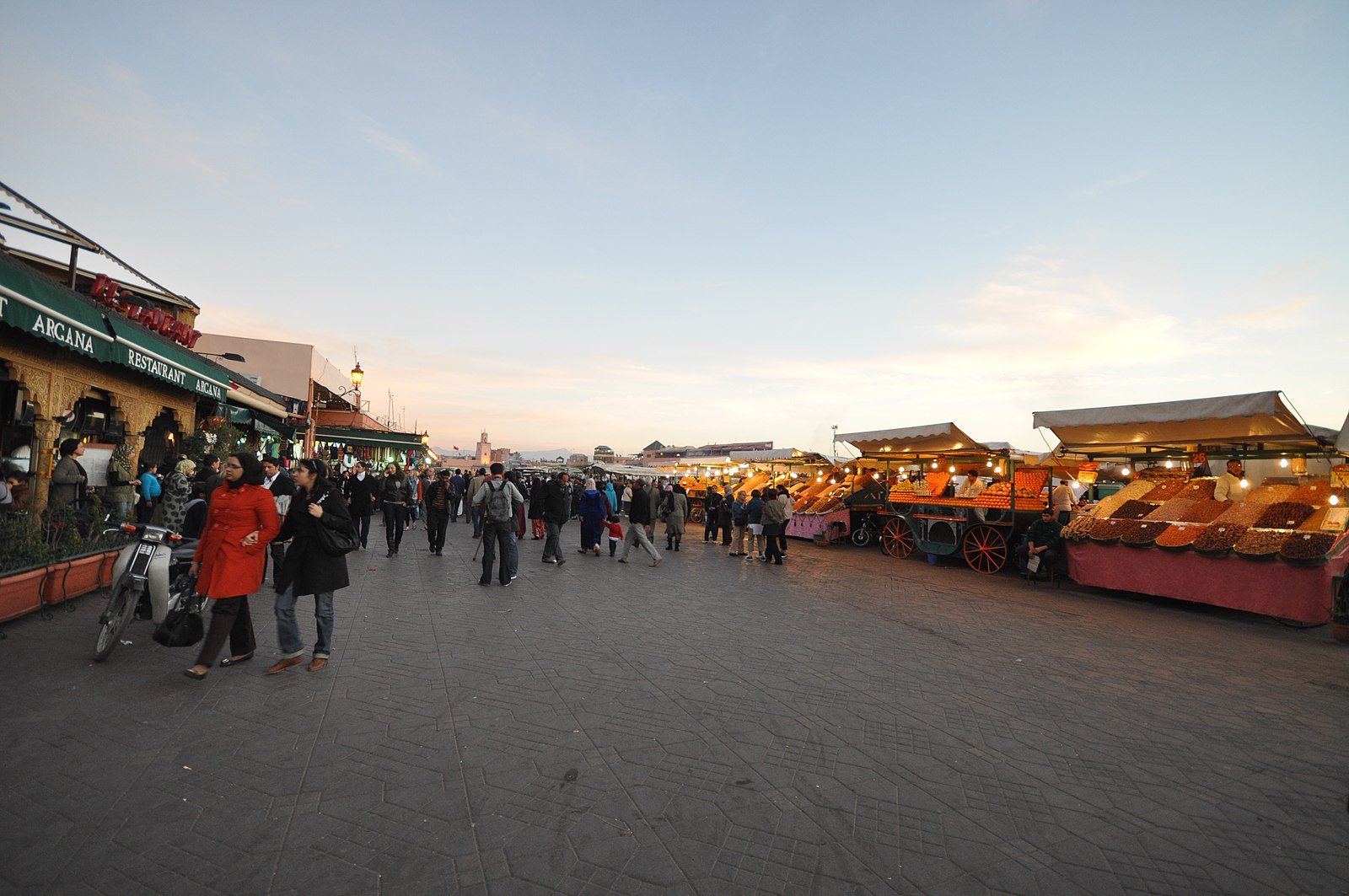 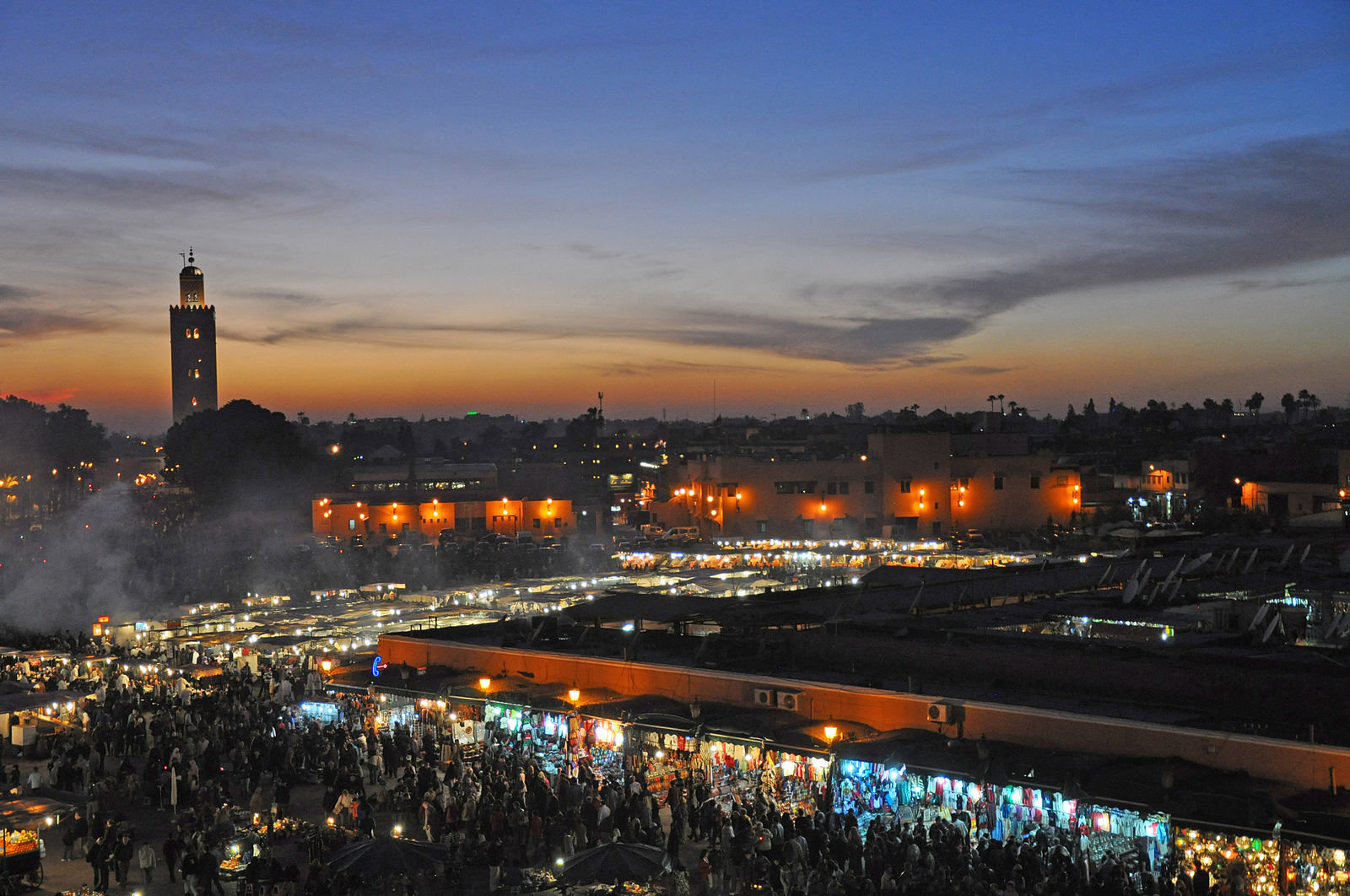