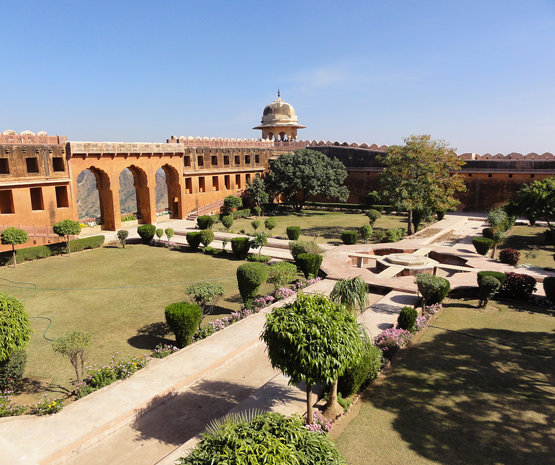 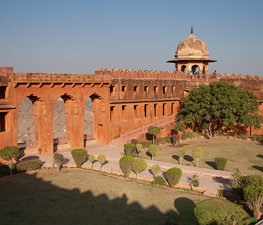 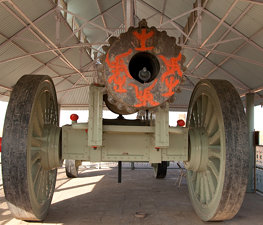 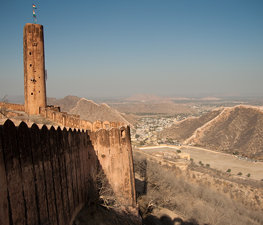 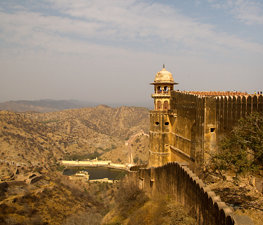 Jaigarh Fort (Rajasthani/Hindi: जयगढ़ क़िला) is situated on the promontory called the Cheel ka Teela (Hill of Eagles) of the Aravalli range; it overlooks the Amber Fort and the Maota Lake, near Amber in Jaipur, Rajasthan, India. The fort was built by Jai Singh II in 1726 to protect the Amber Fort and its palace complex and was named after him.

The fort, rugged and similar in structural design to the Amber Fort, is also known as Victory Fort. It has a length of Шаблон:Convert along the north-south direction and a width of Шаблон:Convert. The fort features a cannon named “Jaivana”, which was manufactured in the fort precincts and was then the world's largest cannon on wheels. The palace complex (Laxmi Vilas, Lalit Mandir, Vilas Mandir and Aram Mandir) located within the fort has a well-tended garden where the royal family resided, the Shubhat Niwas (an assembly hall of the warriors), an armoury and a museum. Jaigarh Fort and Amber Fort are connected by subterranean passages and considered as one complex.

Шаблон:Double image The Jaigarh Fort, located on one of the peaks of the Aravalli range of hills is built about 400 m above the Amber Fort. It provides an excellent of view of Aravalli hills and the Amber Fort down below.

The fort is Шаблон:Convert away from Jaipur city. It stands on a short diversion from the Jaipur-Delhi Highway, which leads to the Jaivana cannon at the Dungar Darwaza ('Darwaza' means "gate"), the same road leads to another important fort called the Nahargarh Fort. It can also be approached from the Amer Fort over a short climb along a steep hill track, arriving at the Awami Gate near the fort museum.

Amber was known in the ancient and medieval period as Dhundhar (meaning attributed to a sacrificial mount in the western frontiers) and ruled by the Kachwahas from the 10th century onwards. The history of Amber and Jaigarh is indelibly linked to these rulers, as they founded their empire at Amber.

During the reign of the Mughal Emperor Shah Jahan, Jaigarh Fort, which is located 150 miles south-west of Delhi, became one of the world's most efficient cannon foundries mainly due to the abundance of iron ore mines in the vicinity of the fort. The cannon foundry Jaigarh Fort had a massive wind tunnel that sucked air from the high mountains into its furnace creating temperatures as high as 2400 °F, the heated air would melt the metal. The liquid molten metal would fill a reservoir chamber and into a cannon mold in the casting pit. Most of those cannons were massive, mostly 16 ft long and had to be prepared within a single day. The Rajput also built a large ingenious mechanical device that had a precision gear system driven by four pairs of oxen, the device was used for hollowing out the cannon barrels. When the Mughal war of succession broke out in 1658 Dara Shikoh secured the cannon outpost of Jaigarh Fort until he was defeated and executed by his younger brother Aurangzeb. Later however, the Mughal Emperor Muhammad Shah appointed Jai Singh II as the official Mughal Qiladar of Jaigarh Fort according to a Firman, ultimately Jai Singh II is known to have molded the great Jaivana Cannon by utilizing the important foundry and devices inside Jaigarh Fort.

Шаблон:Multiple image The fort is highly fortified with thick walls of red sandstone and is spread over a layout plan with a length of Шаблон:Convert and a width of Шаблон:Convert; it has an impressive square garden (Шаблон:Convert square) within it. Ramparts in each corner are sloping and provide access to the upper level structures. The palaces have court rooms and halls with screened windows. A central watch tower on a raised ground provides excellent vistas of the surrounding landscape. The Aram Mandir and the garden within its courtyard, on the northern side of the fort complex, has a triple arched entrance "The Awani Darwaza" which was refurbished in recent times to get fine views of the Sagar Lake (an artificial lake); water from this lake used to be transported to the fort in pouches loaded on elephant backs and also by humans carrying water pots. The triple arch gateway with fortification walls above it is painted red and yellow. It is oriented in an east west direction and faces west. The architectural features are of Indo-Persian style with cyclopean walls built with dressed stone and plastered with lime mortar. There are two temples within the fort precincts, one is the Ram Harihar temple of the 10th century and the other one is the Kal Bhairav temple of 12th century vintage.

The water supply facilities in the fort was met by creating water harvesting structures in the vicinity in the Aravalli catchment and conveying water through a canal on the west side of the fort over a Шаблон:Convert distance (seen at site) to be stored in three underground tanks below the central courtyard (one tank was used by prisoners for bathing, the second was used to store gold and jewellery and the third one was empty; the largest tank had capacity to store 6 million gallons of water. These tanks also created a stir in the recent political history of the fort when they were searched for hidden treasure stashed for gemstones and jewellery (said to have been kept hidden safely by the royal family), which turned out be untrue. It was also rumoured that a treasure belonging to the Kachwaha rulers of Amber had been stacked in the fort precincts. The search had been ordered during the Emergency declared by the Indian Prime Minister Indira Gandhi during 1975–1977. A futile search was also launched, in 1977, of all the buildings in the fort, by the Income Tax department, using metal detectors. There was also a Parliament Question on this issue where a question was posed whether a "Search for treasure carried out from 10th June 1976 till November 1976 by the Income Tax Authorities at Jaigarh Fort on the Jaipur Delhi Road was closed to ordinary traffic for one or two days so as to make way for military trucks carrying treasures to the residence of the then Prime Minister, Smt. Indira Gandhi?". However, the search carried out for treasures by an Army unit at Jaigarh Fort, after a three-month search had found no treasures. It was then conjectured that Sawai Jai Singh probably used the treasure to build the city of Jaipur.

The museum is located to the left of the Awami Gate; it has exhibits of photographs of the Royalty of Jaipur, stamps and many artefacts, which include a circular pack of cards. A spittoon of 15th century vintage and also hand drawn plan of the palaces are seen in the museum.

Jaigarh Fort was a centre of artillery production for the Rajputs. It is now home to the Jaivana – at the time of its manufacture in 1720, it was the world's largest cannon on wheels of the Early Modern Era. The foundry where it was manufactured is also located here. A plaque at the entrance to the enclosure where the Jaivan Cannon is displayed gives relevant information on the history of the Cannon, its size and use. This cannon was never used in any battle as the Rajput rulers of Amber had friendly relations with the Mughals. This testifies to well-preserved features of fort. The cannon was fired only once with a charge of Шаблон:Convert of gunpowder and when fired covered a distance of about Шаблон:Convert.

The Jaivana was manufactured during the reign of Maharaja Sawai Jai Singh II (1699–1743) at a foundry in Jaigarh. The barrel is Шаблон:Convert in length and weighs 50 tonnes. It has a diameter of Шаблон:Convert. The barrel has decorations carved on it which depict trees, an elephant scroll and a pair of birds (ducks). It is mounted on wheels and has the mechanism of two back wheels mounted on roller pin bearings, to turn it 360° and fire in any direction. A tin shed was built to protect the cannon against weather. The cannon had a range of 22 miles and used Шаблон:Convert balls.

Under the shade of a tree — Jeremy Higgs @ Flickr

Rohit Upadhyay
After heavy walk, avoid during afternoon as you will burn urself. HAVE LOTS of water and take the car till the canon.. Have slice downstairs in the shop. For more details visit.www photokatha.in

Amit Gaharwar
Don't give it a miss. USP: Take your car along to cover the fort and world's largest cannon. Plus views of Amber fort, jal mahal and jaipur on the way. Do hire a guide.

Praful
Don't miss see the worlds biggest canon, 'Jaivana'. Also try and get lost in the bhulbhaliya (maze), which open out magnificent views of the Amer fort and surrounding villages.

Holiday Mango
One of the extensive historic site in jaipur. It was the palace of mughals. The palace consisting of beautiful garden around it. Try to visit here in your golden triangle tour packages.

ITC Hotels
The fort houses Jaivana, the world’s largest Canon ever made. It rests on 4 wheels and weighs 50 tons. Myth is that it had a range of 40kms & created a pond when it was test fired the only one time.
Load more comments
foursquare.com
8.3/10
218,344 people have been here
I've been here
Add to wishlist

See all hotels See all
lebua Lodge at Amer 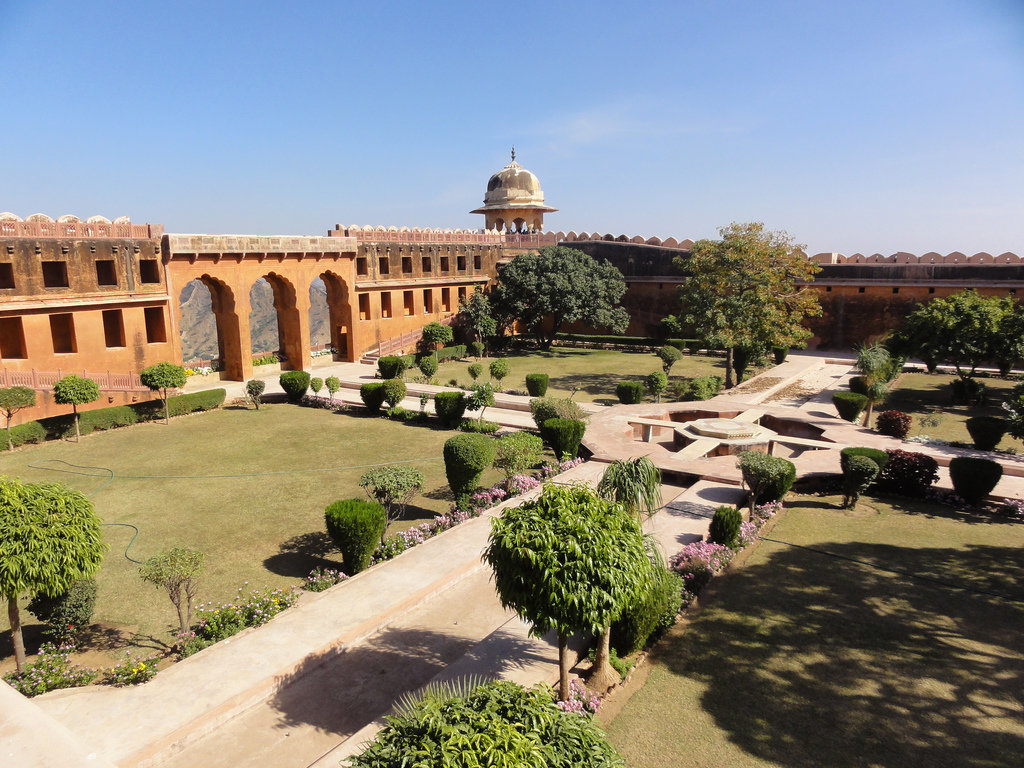 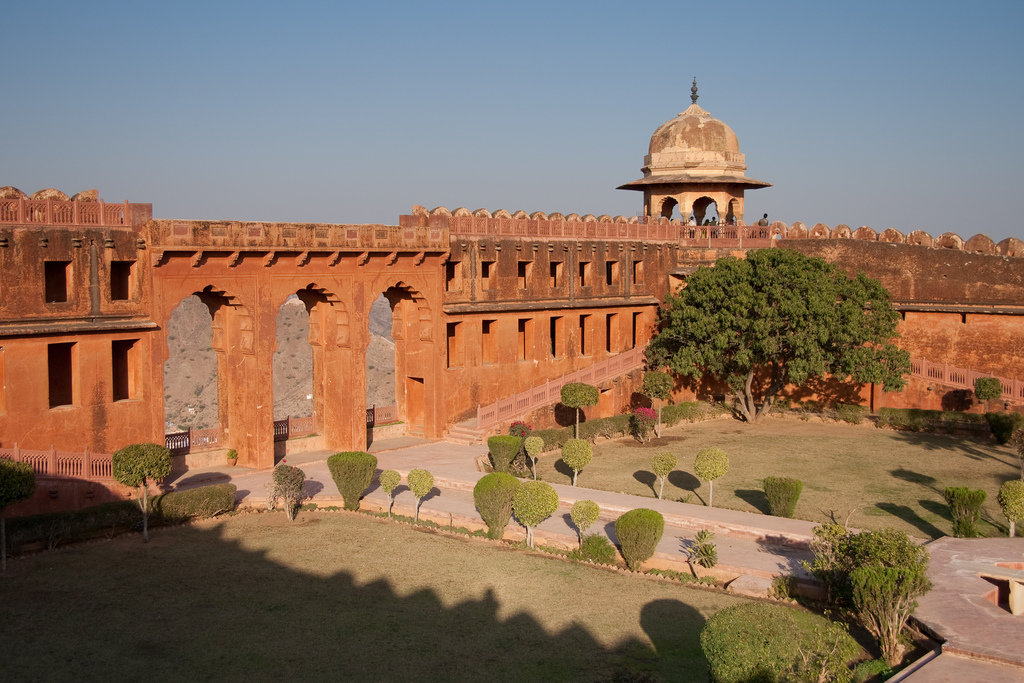 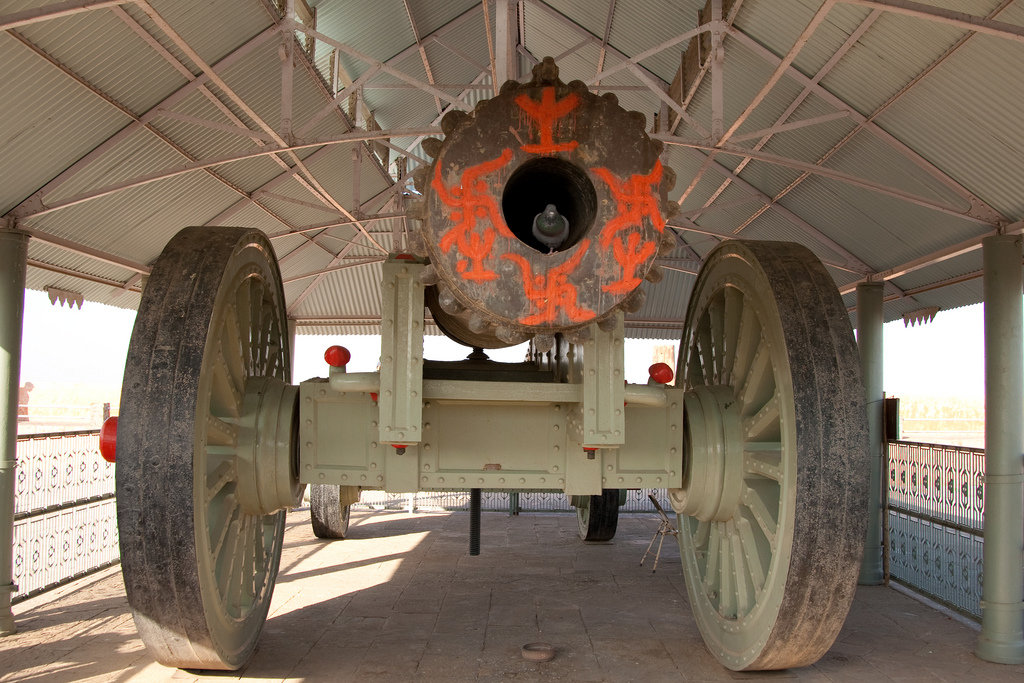 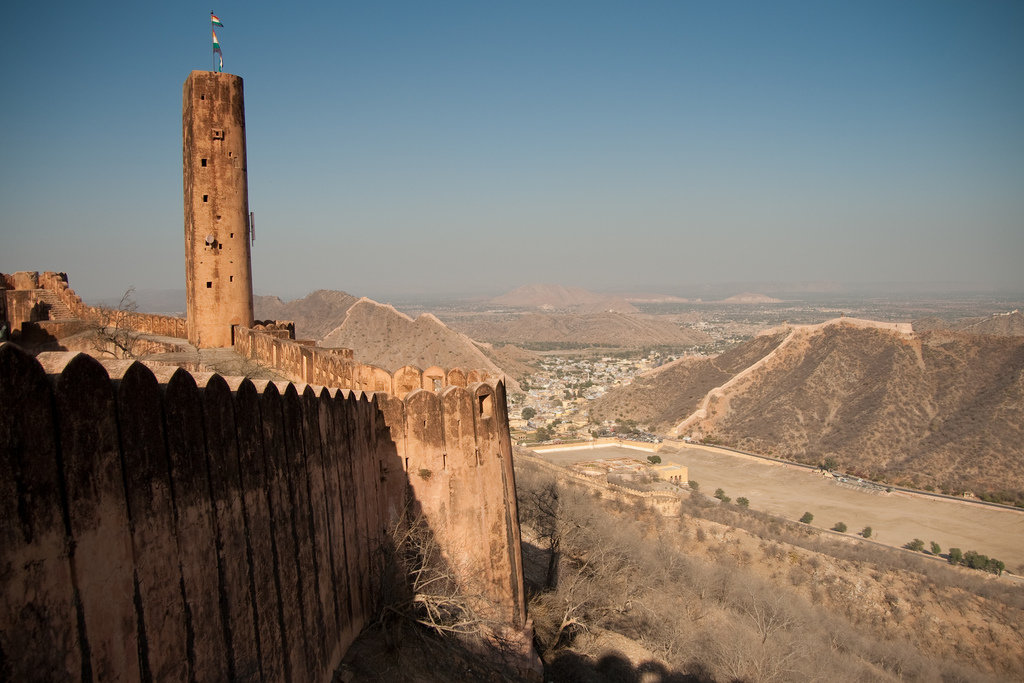 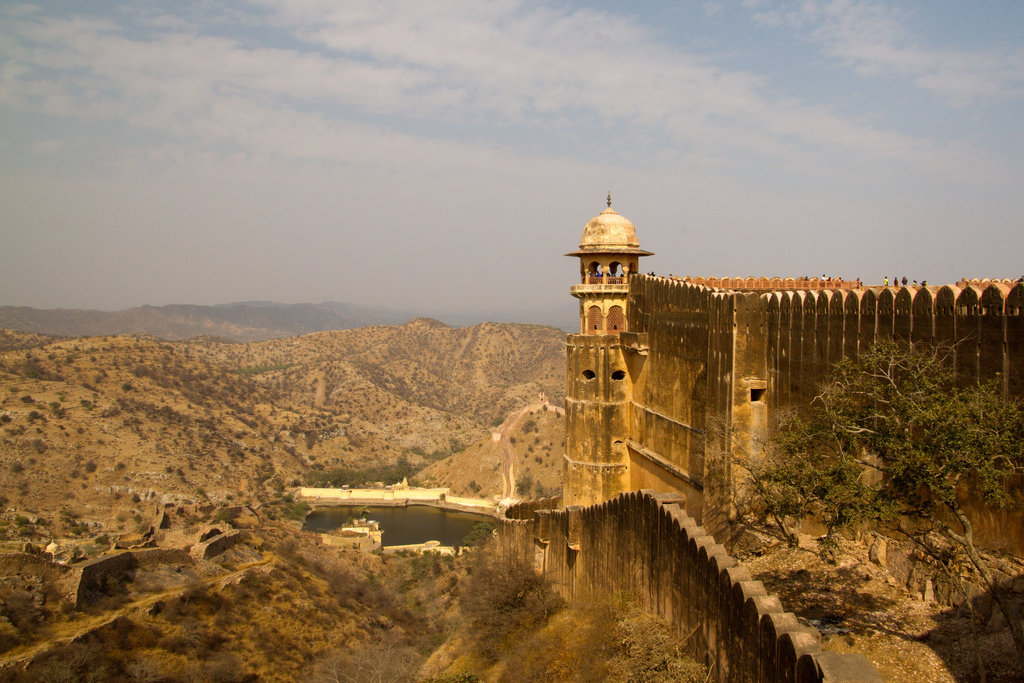 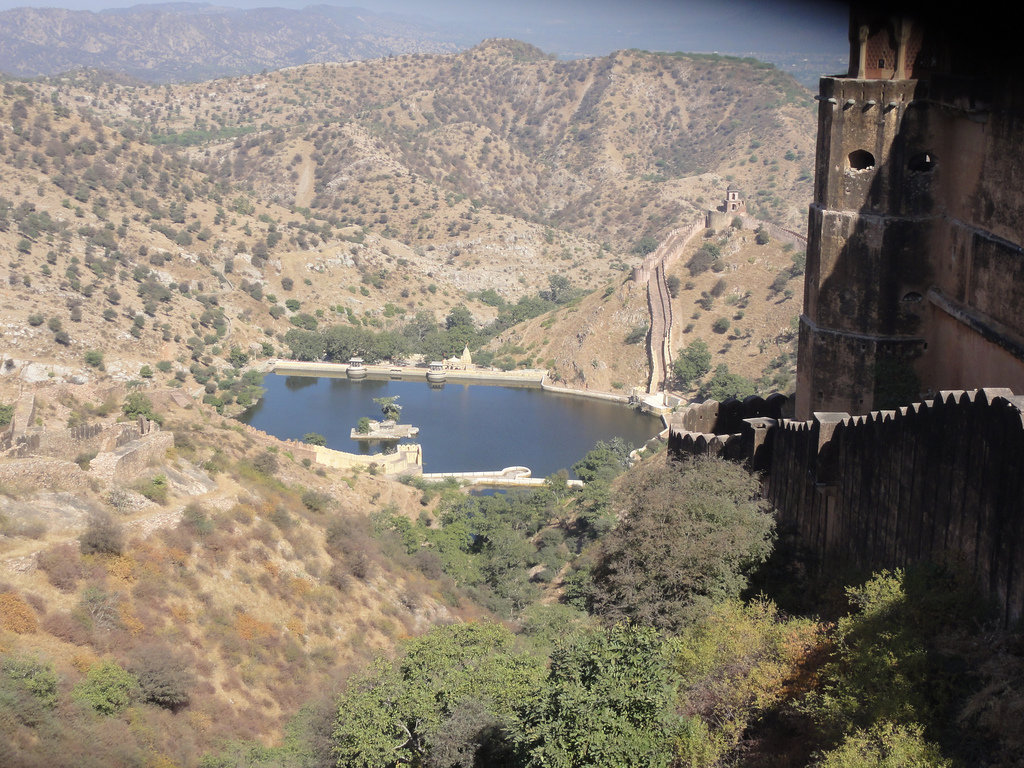 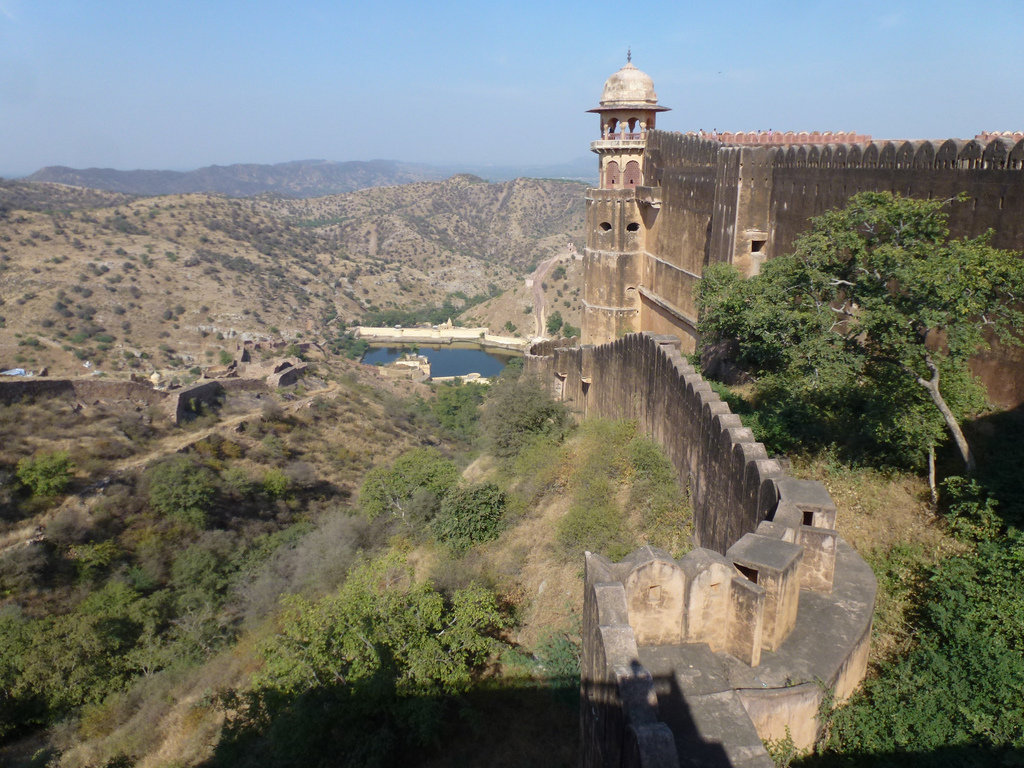 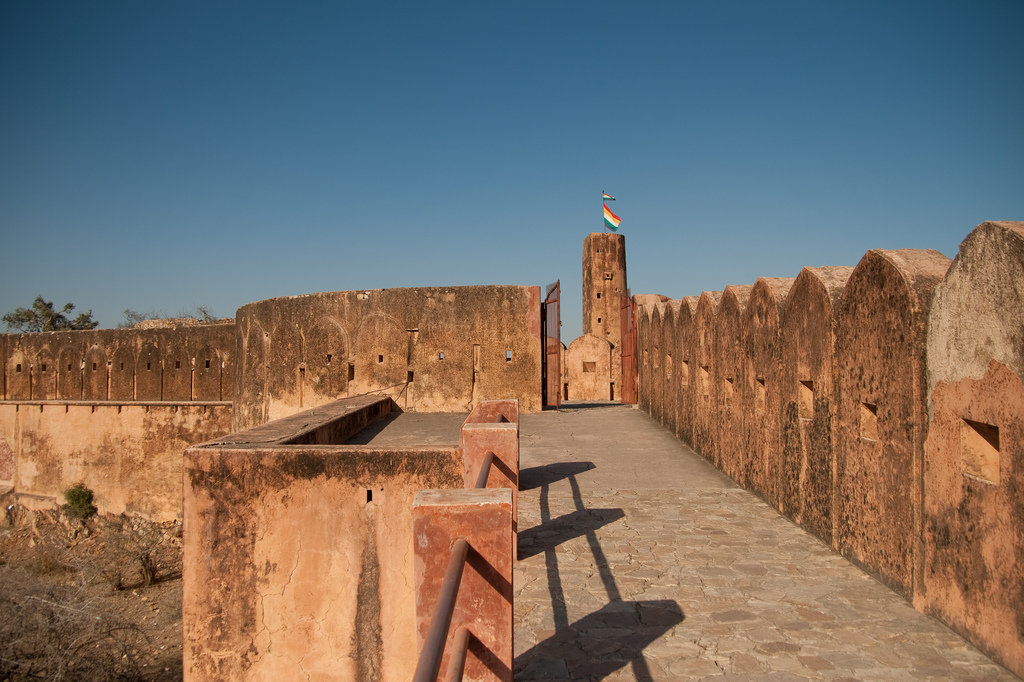 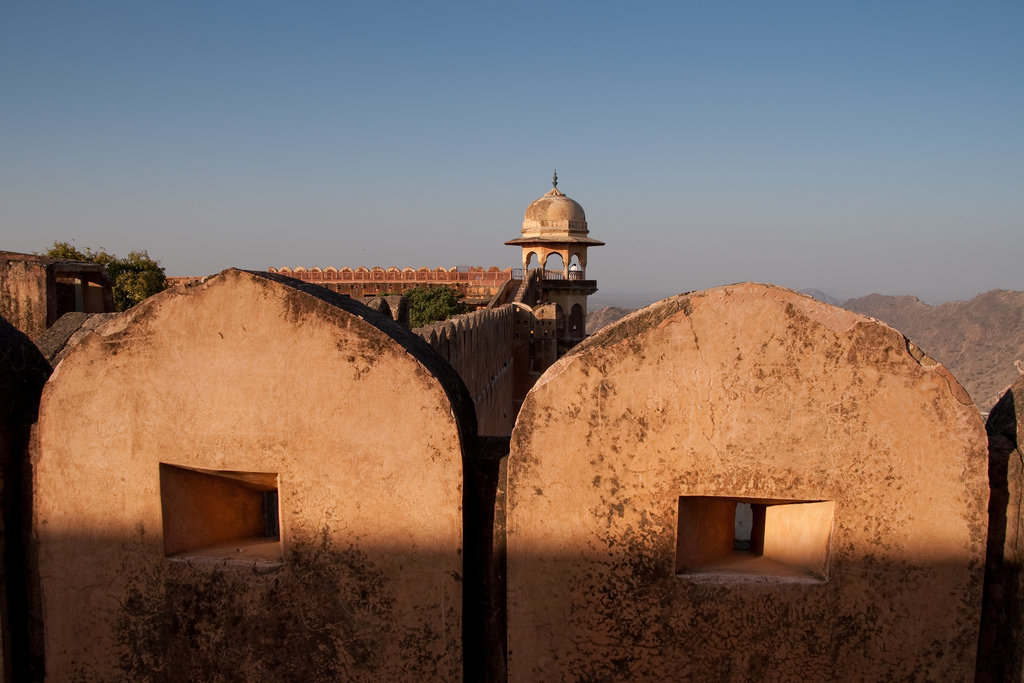 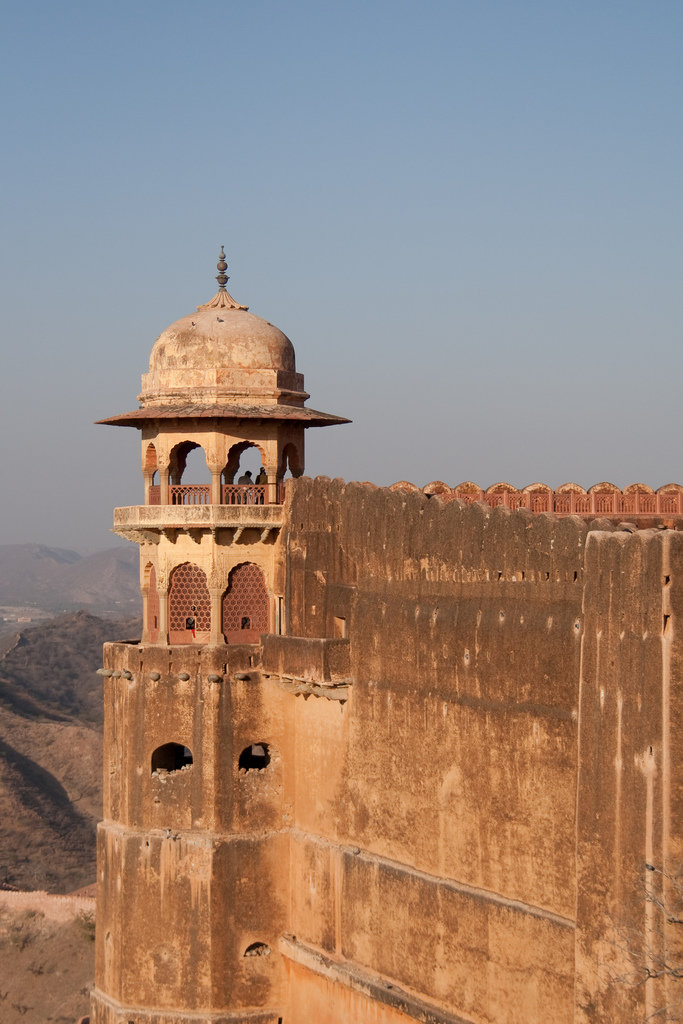 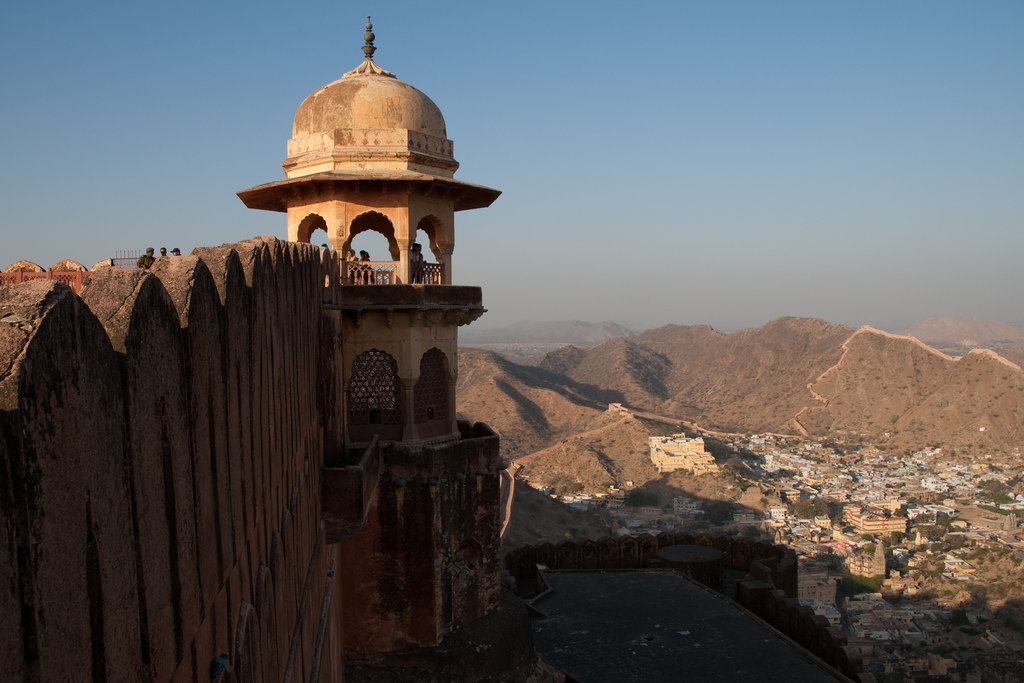 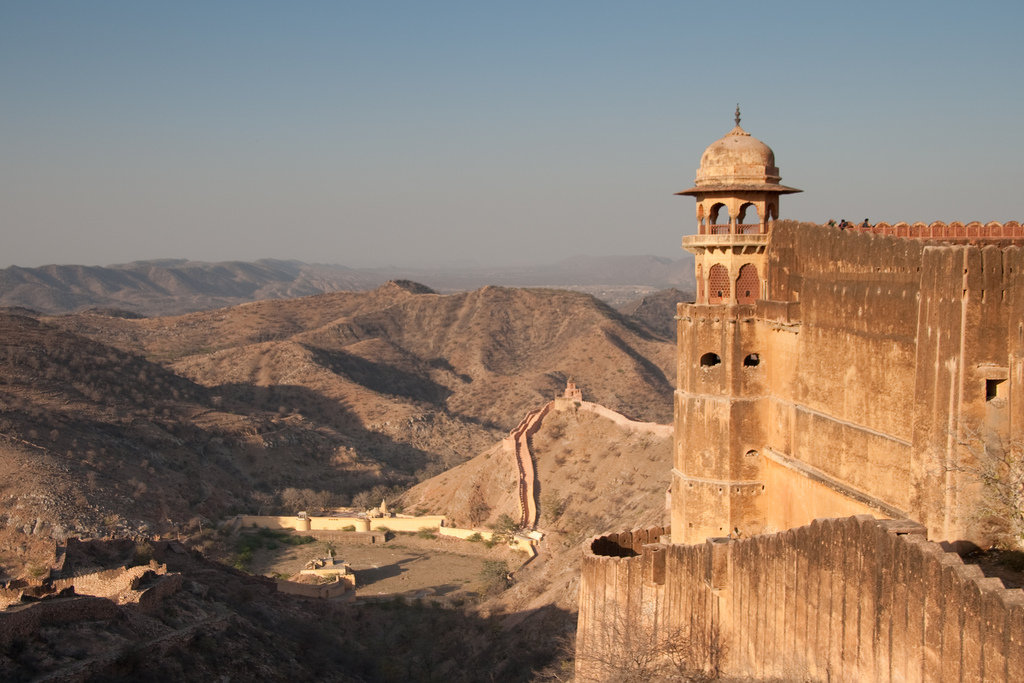 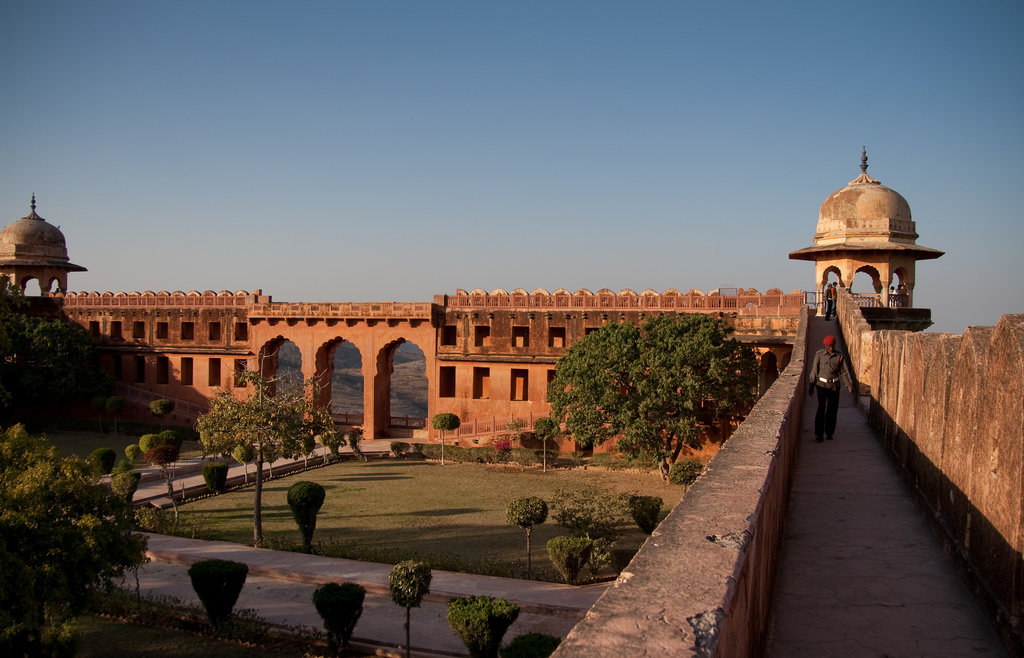