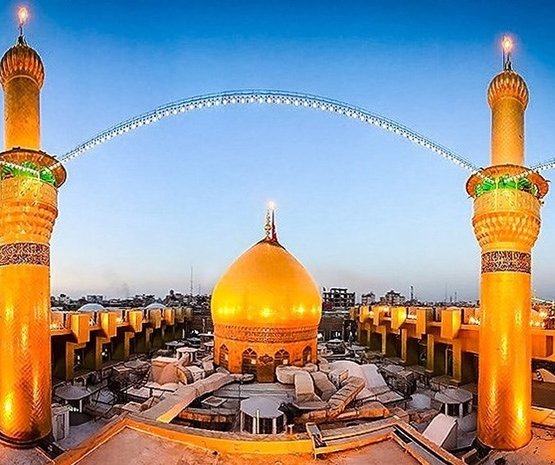 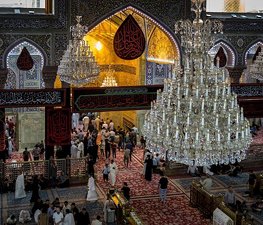 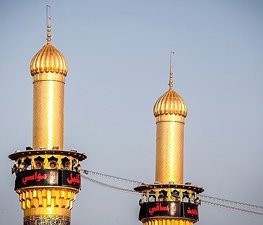 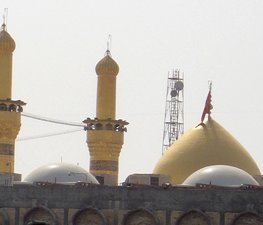 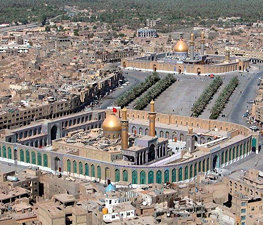 The Shrine of Husayn ibn ‘Alī (Arabic: مقام الامام الحسين‎) is a holy site of Shī‘ah Islām in the city of Karbalā, Iraq. It stands on the site of the grave of Husayn ibn ‘Alī, the second grandson of Muhammad, near the place where he was killed during the Battle of Karbalā in 680 C.E.. The tomb of Husayn ibn ‘Alī is one of the holiest places for Shī‘as outside of Makkah and Madīnah, and many make pilgrimages to the site. Every year, millions of pilgrims visit the city to observe ‘Āshūrā, which marks the anniversary of Husayn ibn ‘Alī's death.

The Sunni Umayyad and Abbasid caliphs prevented construction of the shrines and discouraged pilgrimage to the sites. The tomb and its annexes were destroyed by Abbasid caliph Al-Mutawakkil in 850-851 and Shi'a pilgrimage was prohibited, but shrines in Karbala and Najaf were built by the Buwayhid emir 'Adud al-Daula in in 979-80.

Two main roads lead the visitor to Karbala. One is from the Iraqi capital Baghdad, through Al-Musails, and the other is from Najaf. At the city's entrance there is a row of houses decorated with wooden columns.

The boundary wall of the shrine surrounds wooden gates covered with glass decorations. The gates open into a courtyard separated into smaller rooms or precincts with many "Iwans" along the walls. The grave of Husayn is enclosed within a cage-like structure, found directly beneath the golden dome.

Karbala, a city in Iraq is located about 100 km southwest of Baghdad at 32.61°N, 44.08°E. It was at first a desolate place and did not witness any noteworthy activity, although it was rich in water and its soil was fertile. When Imam Husain arrived at Karbala and was surrounded by the forces of Ubaidullah bin Ziyad, he inquired about the name of the place. Someone replied it is Aqr - meaning ‘harsh’. Imam Husain then said: we seek refuge with Allah from Al Aqr. He once again asked the name of the village. Then one of the attendants replied, its name is Karbala. Imam Husain spontaneously declared: land of Karb and Bal’a meaning (land of) “torture and trial”. In the time of Imam Husain, the place was also known as al Ghadiriyah, Nainawa, and Shat ul Furat. Imam Husain bought a piece of land, after his arrival at Karbala from Bani Asad. He and his Ahl al Bait are buried in that portion, known by as Hair, where the Shrines are presently located. The history of destruction and reconstruction of the Shrines of Karbala is long. Both the Shrines were greatly extended by successive Muslim rulers, but suffered repeated destruction from attacking armies. Karbala's development was strongly influenced by the Persians.

History has recorded the names of several rulers who shared the honor of extending, decorating and keeping the Shrines and its precincts in good condition. Among them is Fateh Ali Qajar, who in 1250 (A.H) ordered the construction of two Shrines, one over Imam Husain’s grave and the other over the grave of his brother, Syedi Abul Fazal al Abbas. The first dome is 27 meters high and completely covered with gold. At the bottom, it is surrounded with 12 windows, each of which is about 1.25 m away from the other, from the inside, and 1.30 m from the outside. The Shrine has an area of 59 m / 75 m with ten gates, and about 65 rooms, well decorated from the inside and outside, and used as class rooms for studying. As for the grave itself, which is in the middle of the precinct, it is called the Rawzah or garden and it has several doors. The most famous one is called al Qiblah or Bab al Zah’ab.

There are many opinions among different investigators, as to the origin of the word "Karbala". Some have pointed out that "Karbala" has a connection to the "Karbalato" language, while others attempt to derive the meaning of word "Karbala" by analysing its spelling and language. They conclude that it originates from the Arabic word "Kar Babel" which was a group of ancient Babylonian villages that included Nainawa, Al-Ghadiriyya, Karbella (Karb Illu. as in Arba Illu [Arbil]), Al-Nawaweess, and Al-Heer. This last name is today known as Al-Hair and is where Hussain ibn Ali’s grave is located.

The investigator Yaqut al-Hamawy had pointed out that the meaning of "Karbala" could have several explanations, one of which is that the place where Hussain ibn Ali was martyred is made of soft earth - "Al-Karbalat".

According to Shī‘ah belief, the true meaning of the name Karbalā was narrated to Muhammad by the archangel Gabriel as being, "the land which will cause many agonies (karb) and afflictions (balā)."

Buried within the Mosque

The grave of Husayn is found in the middle of the precinct, and is called the "Rawda" or "Garden" and it has several entry gates. The most famous one is called "Al-Qibla" or "Bāb al-Dhahab". When it is entered, one can see the tomb of Habīb ibn Madhāhir al-Asadī, to the right hand side. Habīb was a friend and companion of Husayn since their childhood and was honored with martyrdom at the Battle of Karbalā.

Within the shrine of Husayn can also be found a grave of all the 72 martyrs of Karbalā. They were buried in a mass grave which was then covered with soil to the ground level. This mass grave is at the foot of Husayn's grave. As well, beside Husayn's grave are the graves of his two sons: ‘Alī al-Akbar and the 6-month old, ‘Alī al-Asghar. Also buried within the mosque is Ibrāhīm (son of the seventh Twelver Shī‘ah Imām, Mūsā al-Kādhim), who spent his life preaching about Karbalā.

Karbalā was at first an uninhabited place and did not witness any constructional activity, although it was rich in water and its soil fertile.

From the time of Husayn ibn ‘Alī's death in 680, pilgrimages to commemorate the massacre have often been repressed.

Despite many attempts by successive rulers, such as Al-Rashīd and Al-Mutawakkil, to put a restriction on the development of this area, it has nonetheless spread with time to become a city.

The historian Ibn Kuluwayh mentioned that those who buried Husayn ibn ‘Alī, made a special and rigid construction with signs above the grave.

Higher and bigger constructions above the grave started during the ruling of al-Saffah, but heavy restrictions were put in place to prevent people from visiting the grave during the rule of Hārūn al-Rashīd.

At the time of al-Mā'mūn, construction around the grave resumed until the year 850, when al-Mutawakkil ordered the destruction and digging of the grave, and then filling the pit with water. His son who succeeded him al-Muntasir, allowed people to visit the grave site, and since then building the precinct to the grave increased and developed step by step.

On the other hand, the historian Ibn al-Athir, stated that in the year 371 AH, ‘Adhud ad-Dawlah became the first to largely lay the foundations for large scale construction, and generously decorated the place. He also built houses and markets around the precinct, and surrounded Karbalā with a high boundary wall turning it into a strong castle.

In the year 407 AH, the precinct caught fire due to the dropping of two large candles on the wooden decorations. The state minister at the time, Hasan ibn Fadl, rebuilt the damaged sections.

History has recorded the names of several rulers who shared the honor of widening, decorating or keeping the precinct in good condition. Amongst them is Fat'h ‘Alī Shāh Qājār, who in 1250 AH ordered the construction of two domes, one over Husayn ibn ‘Alī's grave and the other over his brother ‘Abbās ibn ‘Alī.

The first dome is 27 meters high and completely covered with gold. At the bottom, it is surrounded with 12 windows, each of which is about 1.25 m away from the other, from the inside, and 1.30 m from the outside.

The mausoleum has an area of 59 m / 75 m with ten gates, and about 65 rooms, well decorated from the inside and outside, used as classrooms for studying.

kazem shahsavari
It was a religious festival like thing going, called (arbaeen) , you probably must see the crowd, almoste everything is free food, residents, people give their houses to travelwrs for free

Alireza
Don't try to get past officials frisking you carrying a phone as even if you succeed there is a high risk of being caught while taking a photo inside and their reaction would be harsh.

Nadeem Makarem
The time is frozen at shrine IMAM HUSSAIN

Data Darbar (or Durbar), located in the city of Lahore, Pakistan is 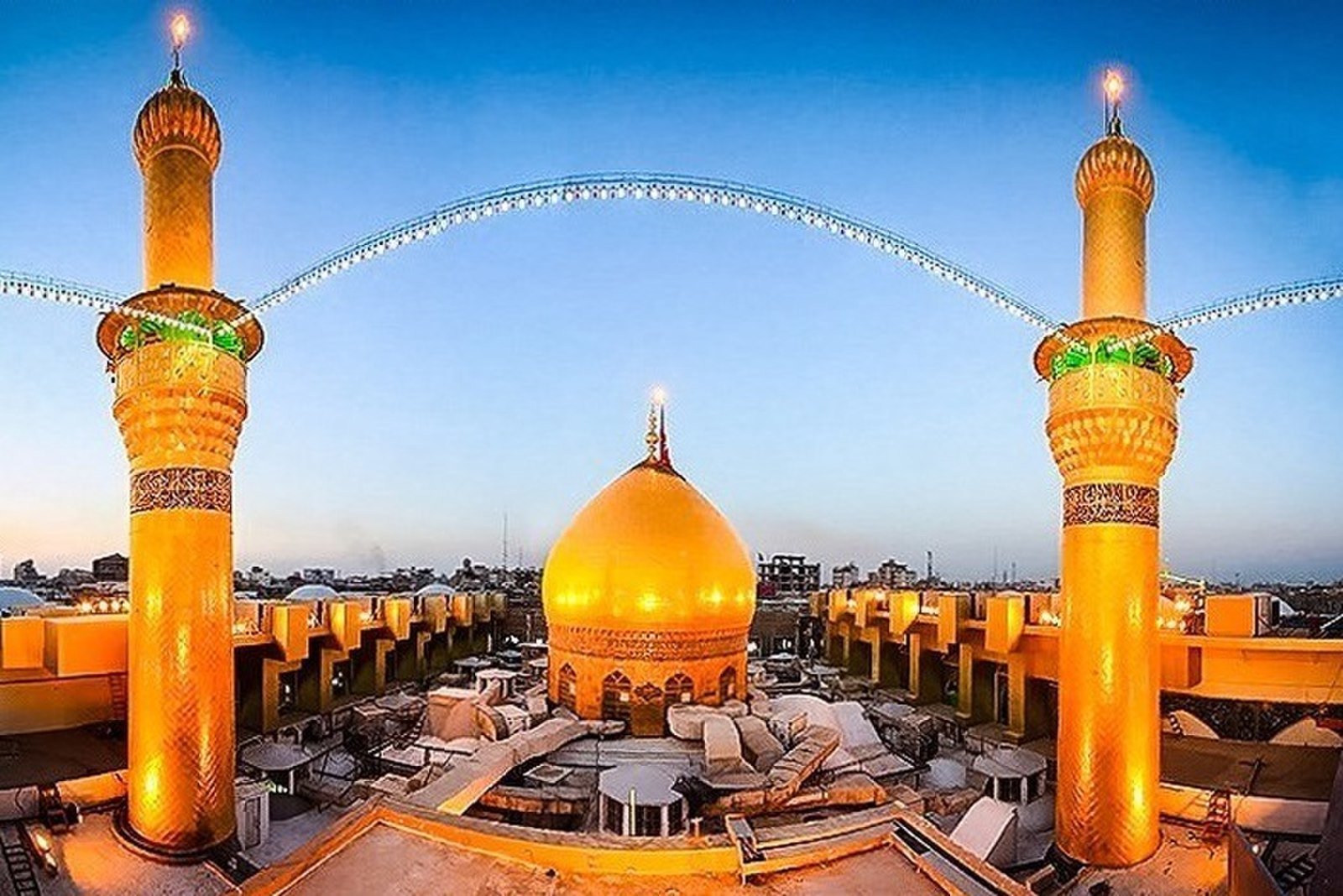 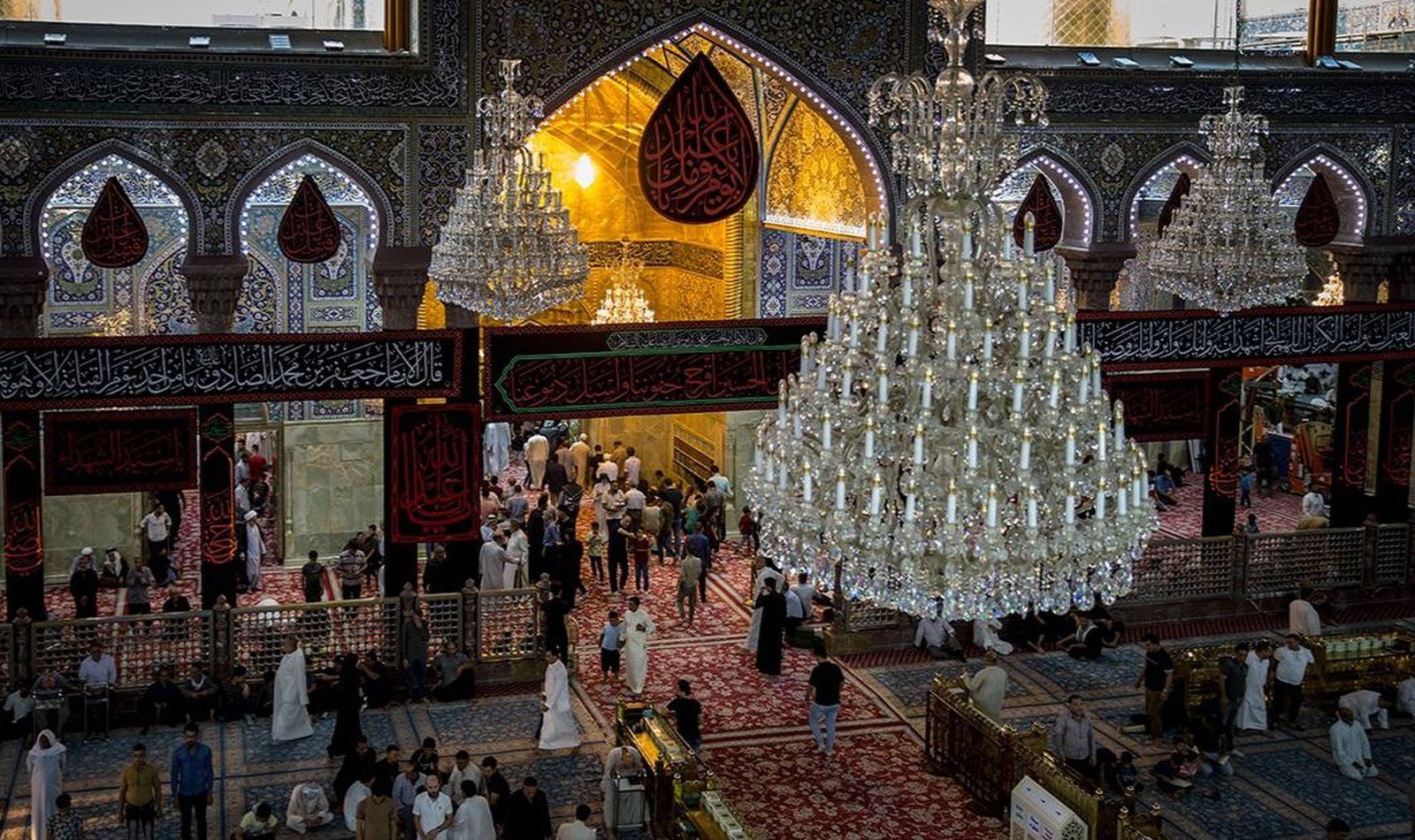 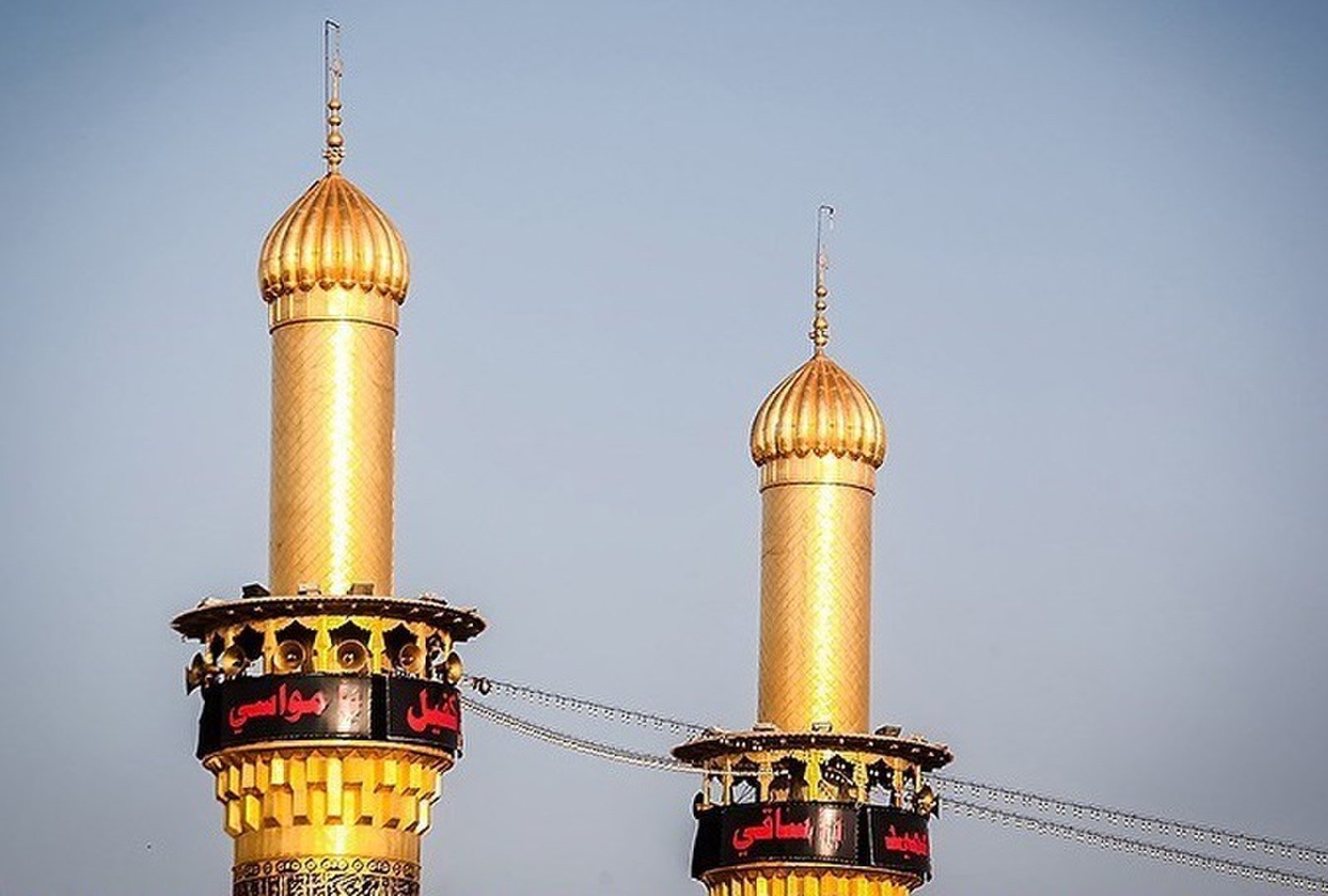 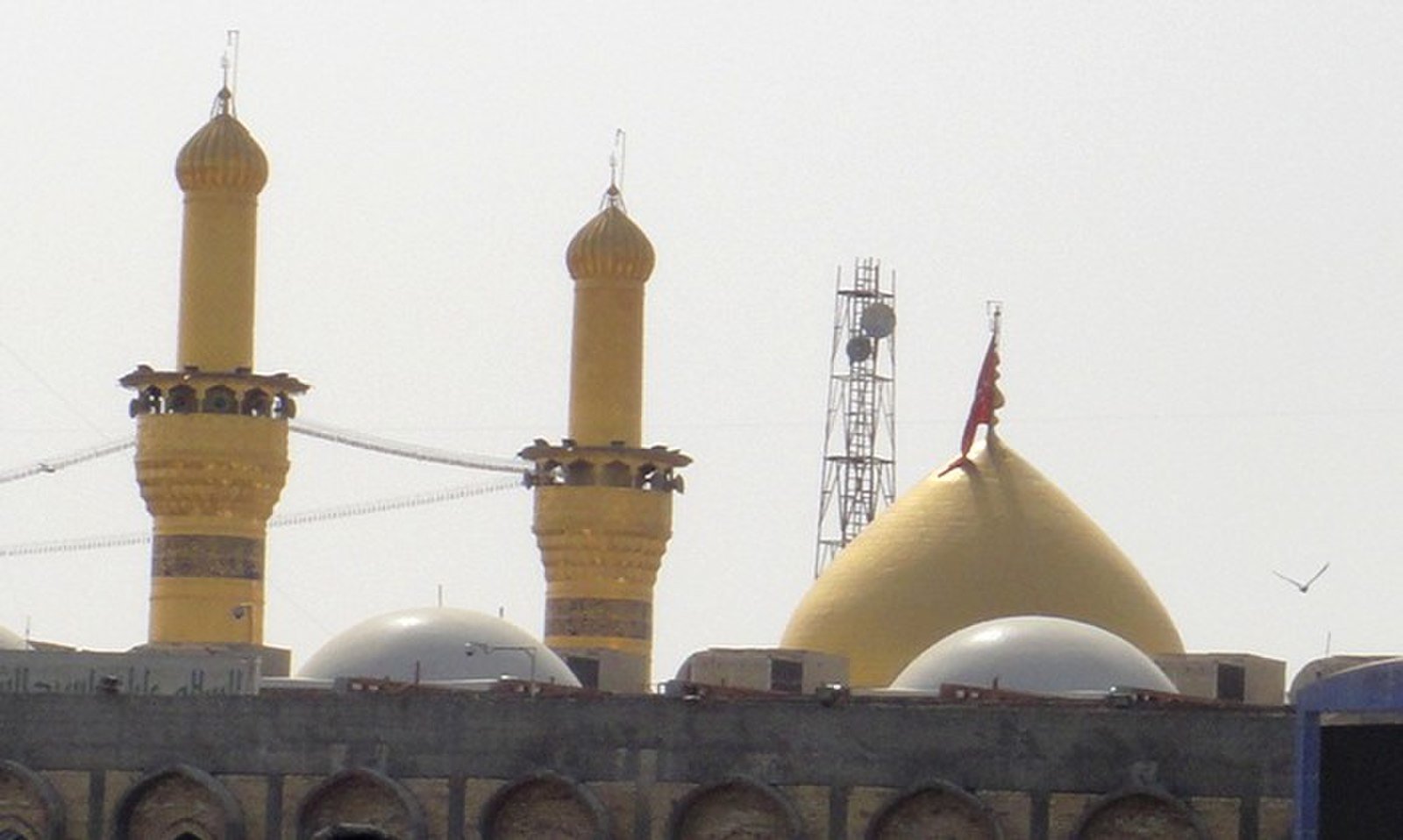 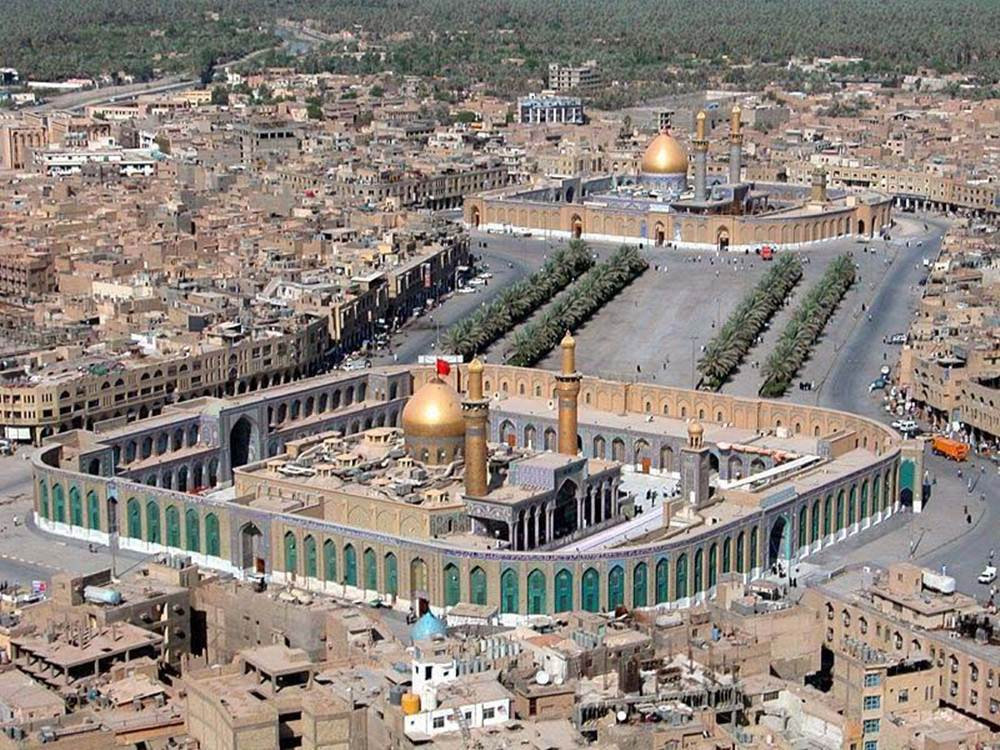 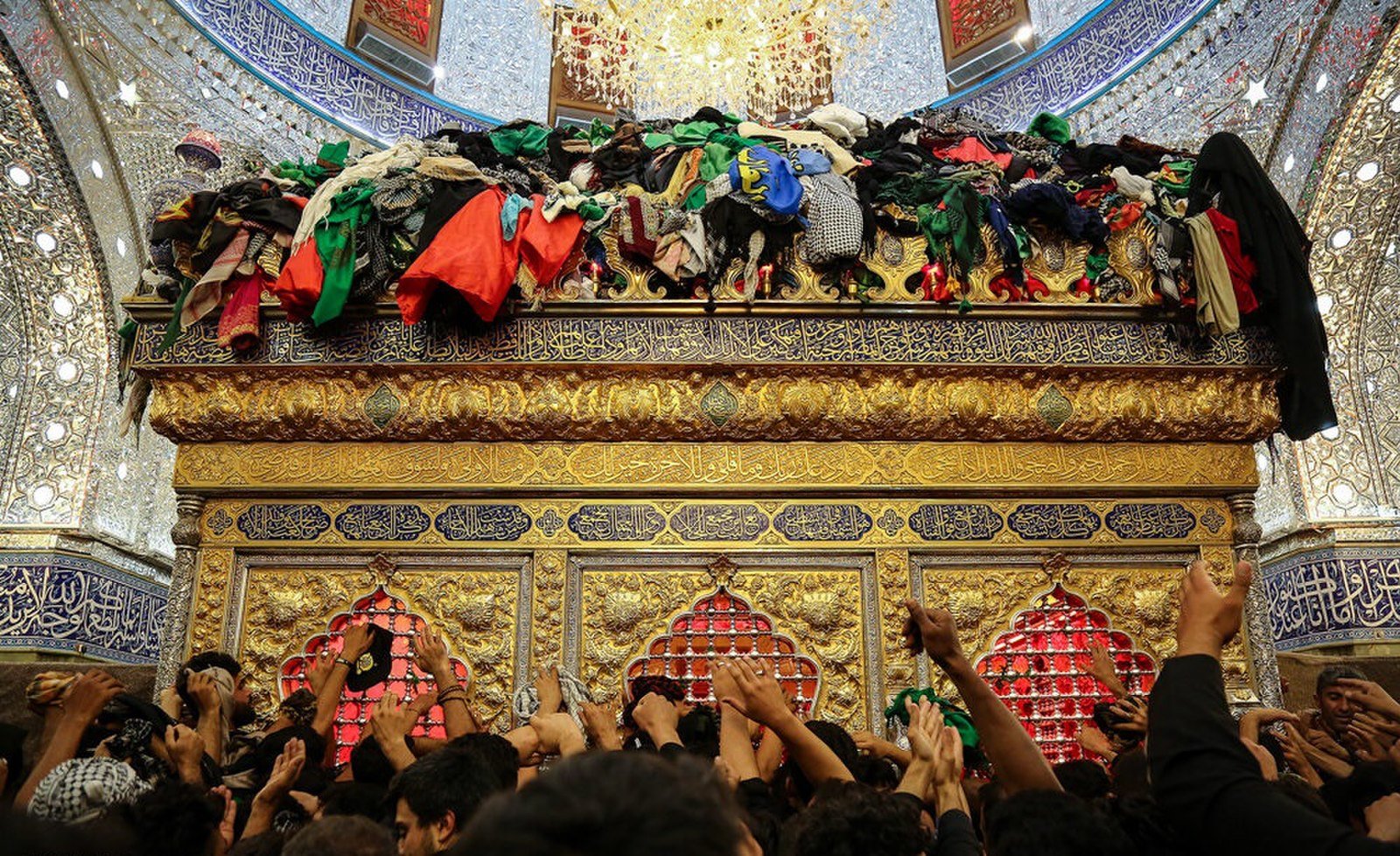 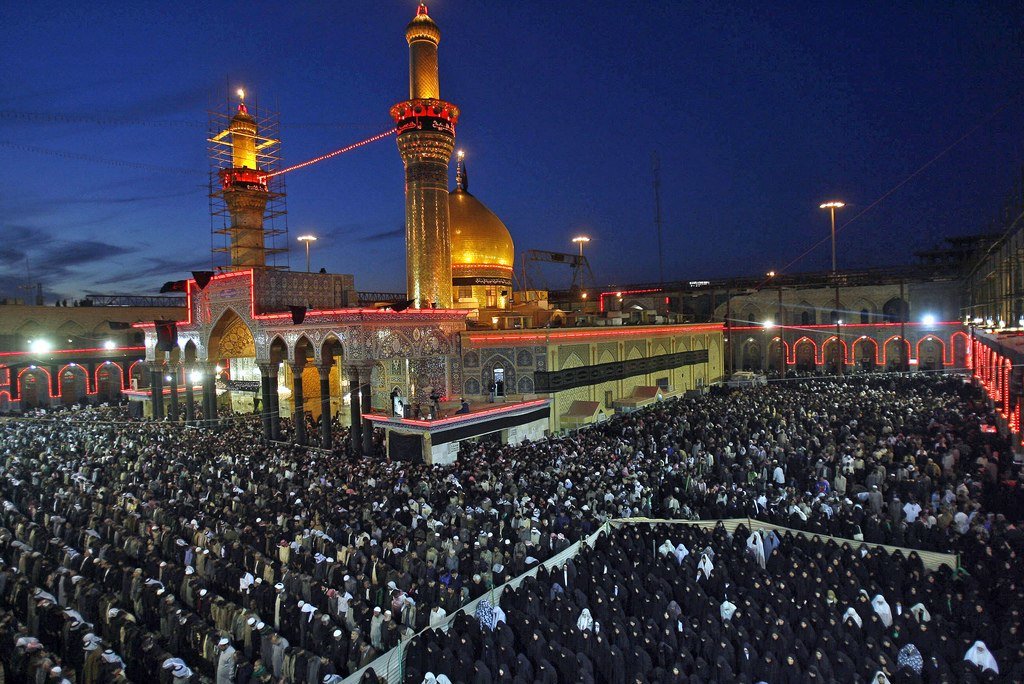 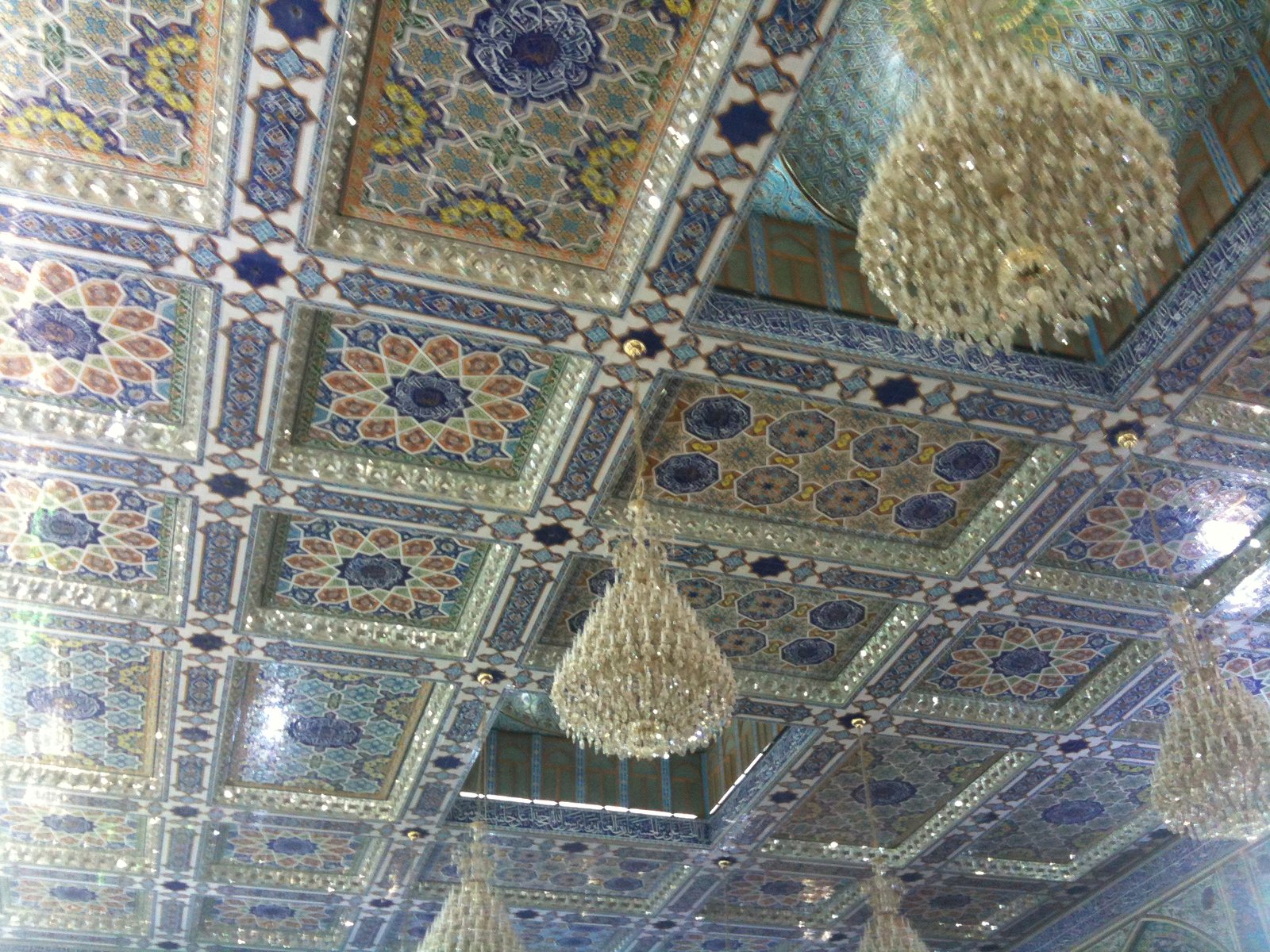 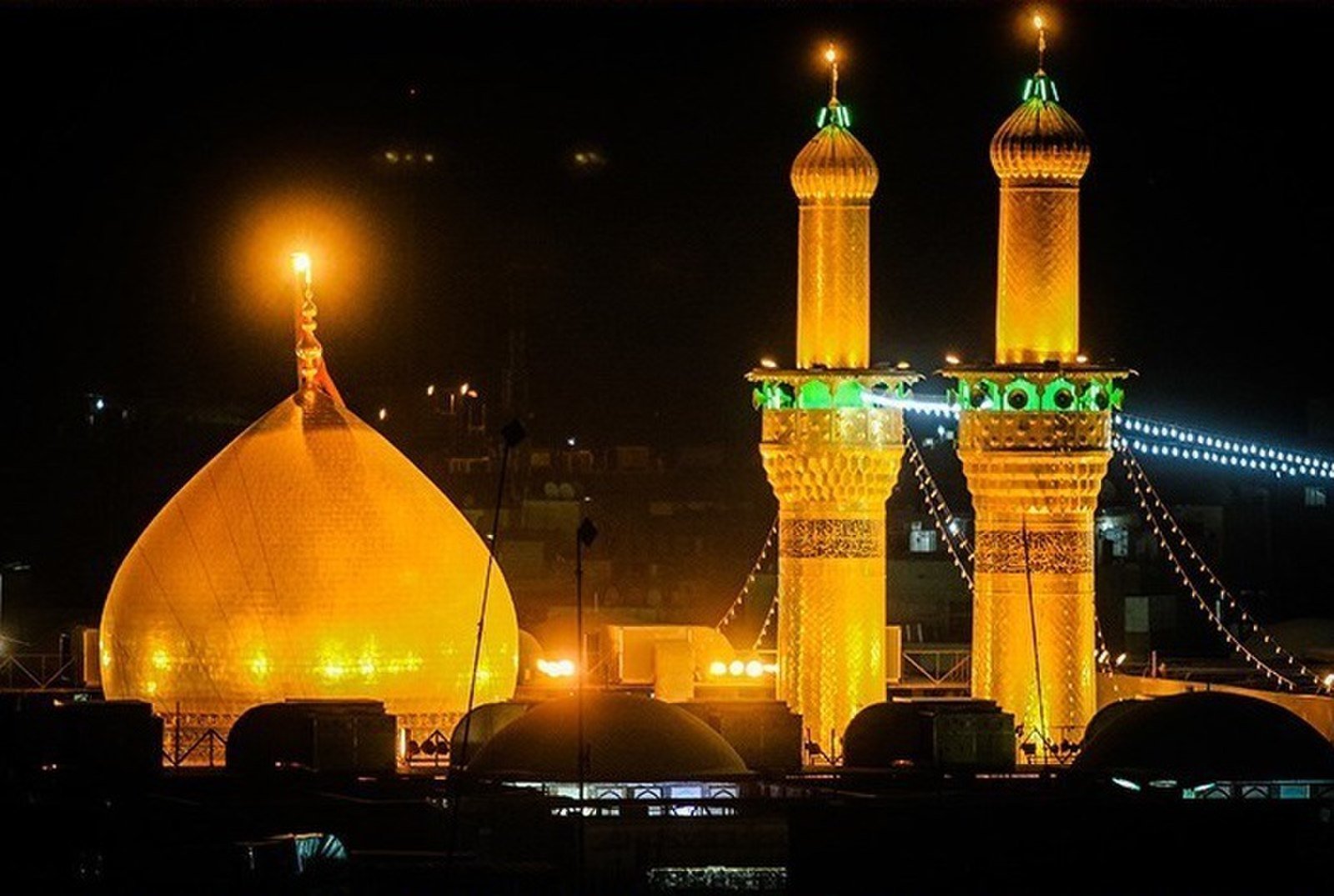 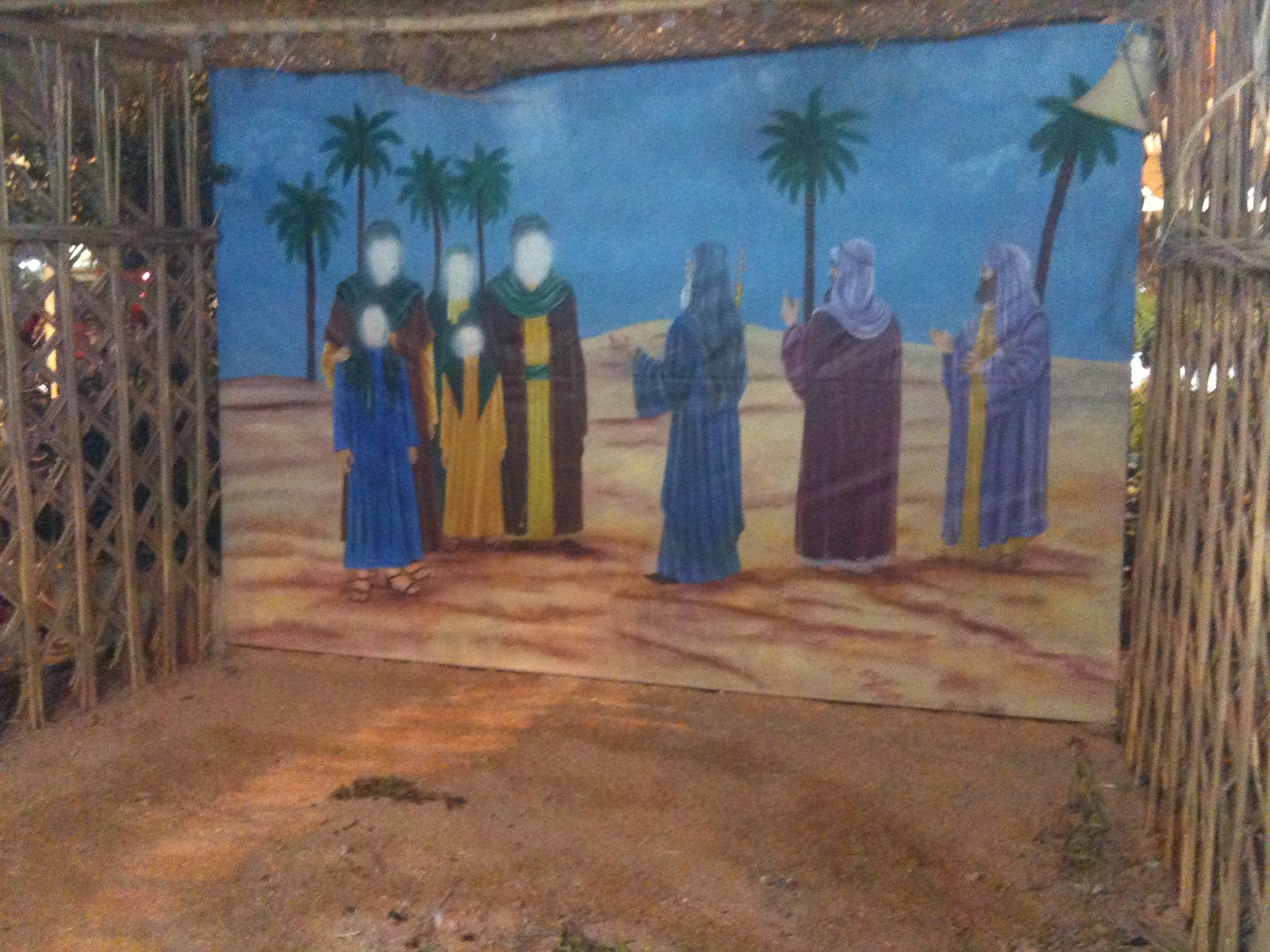 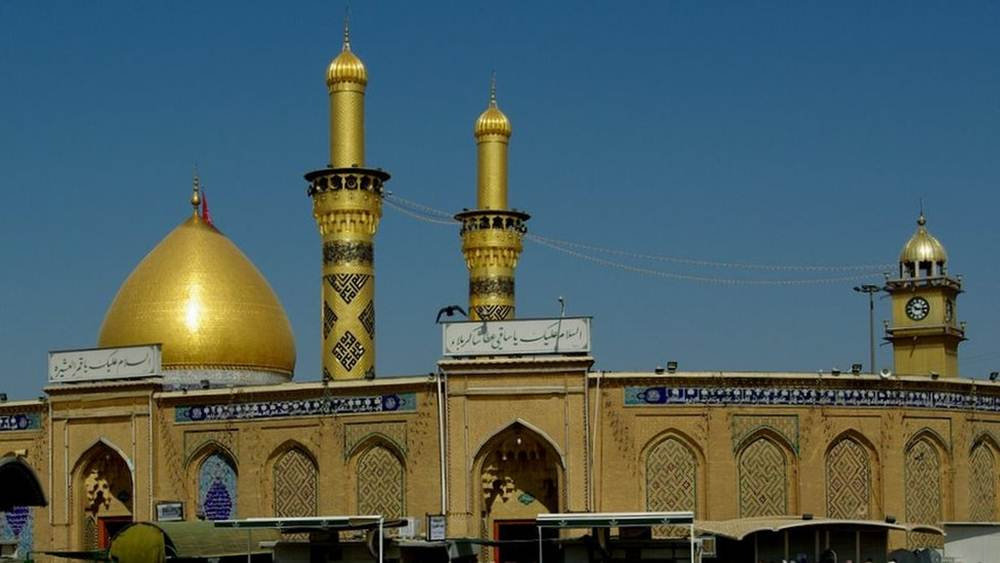 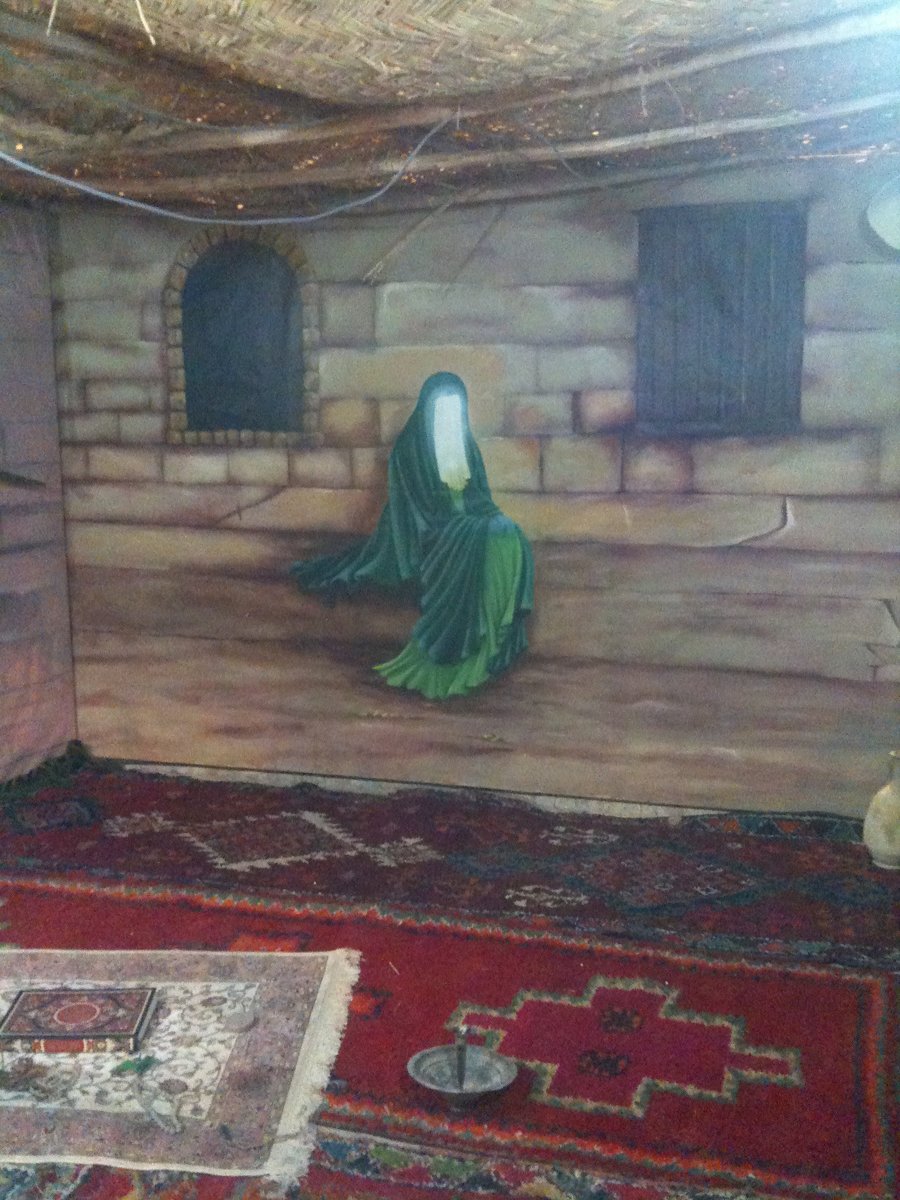 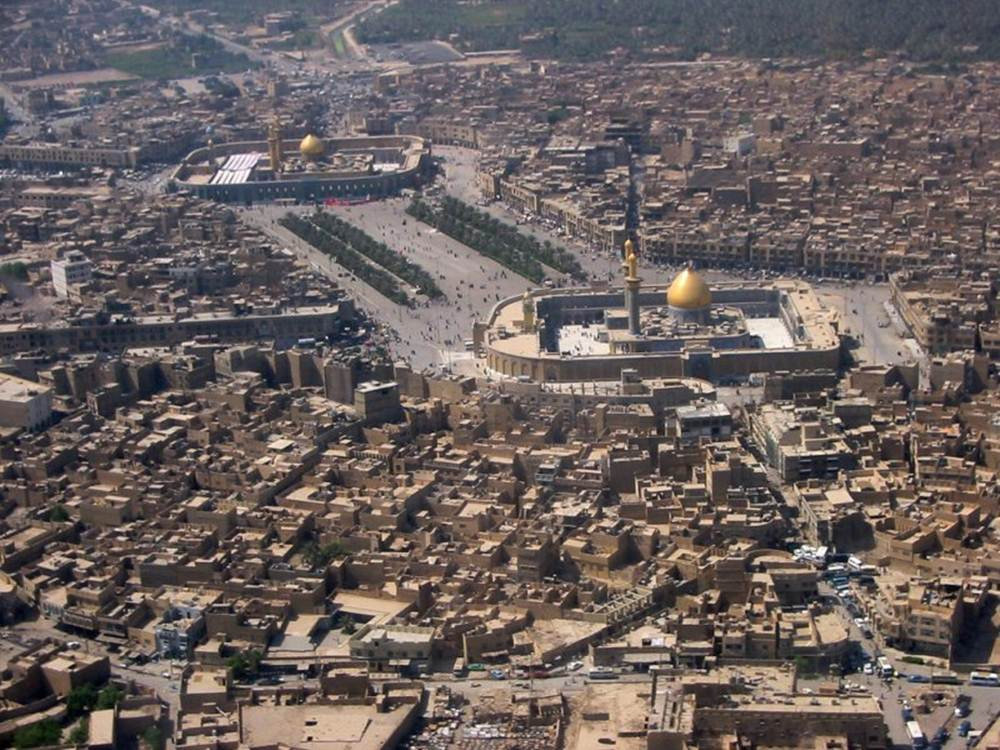 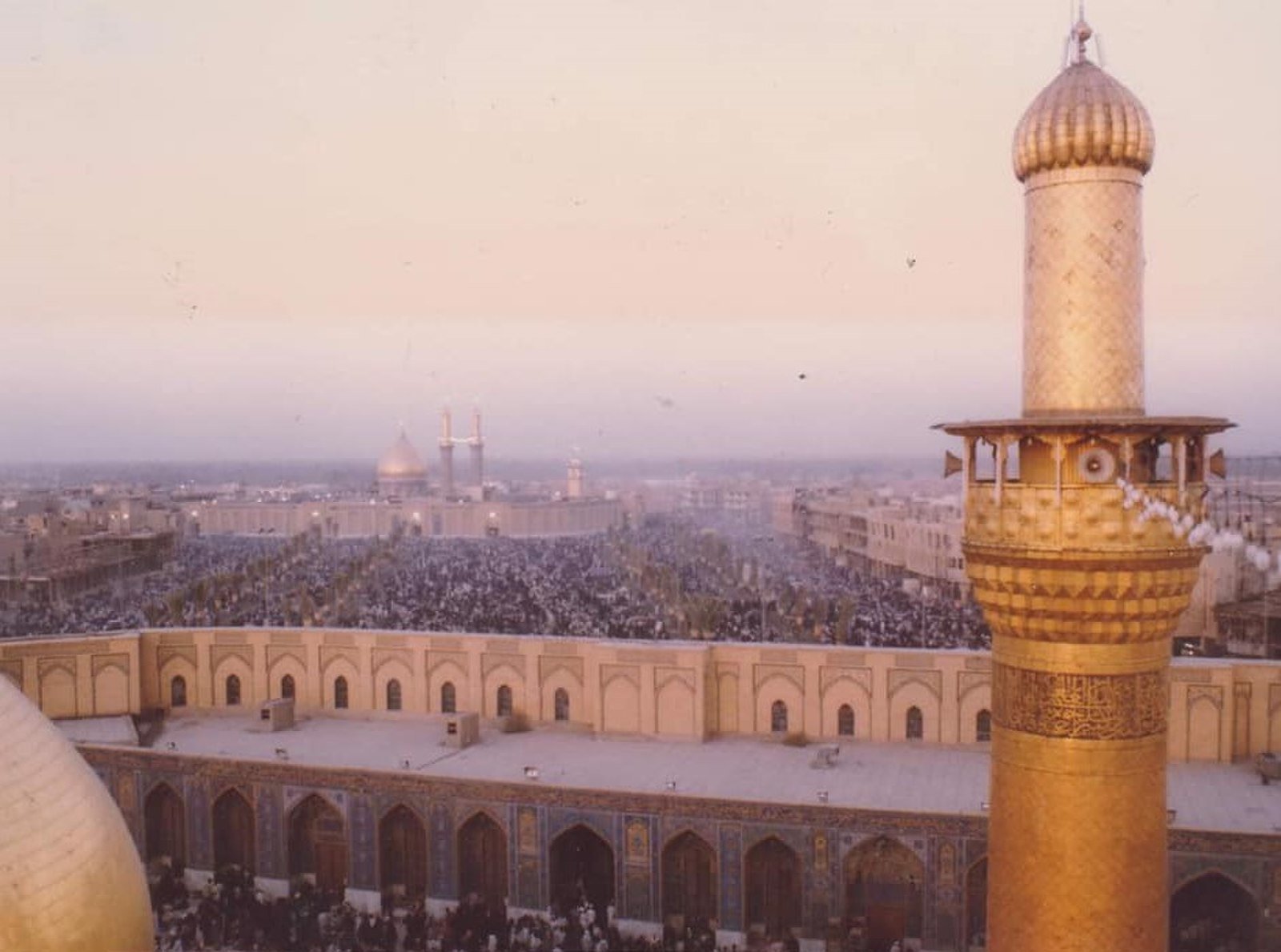 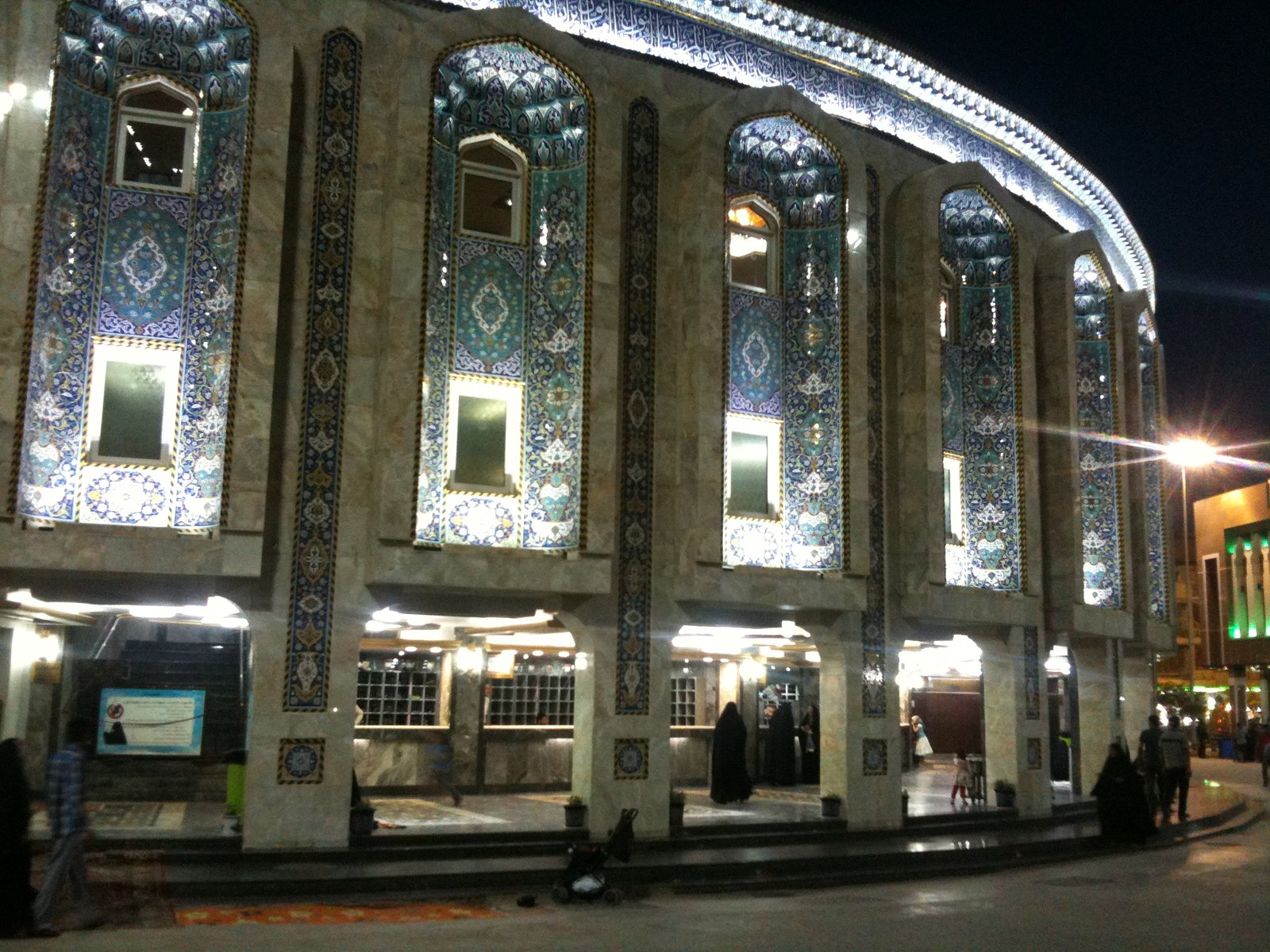 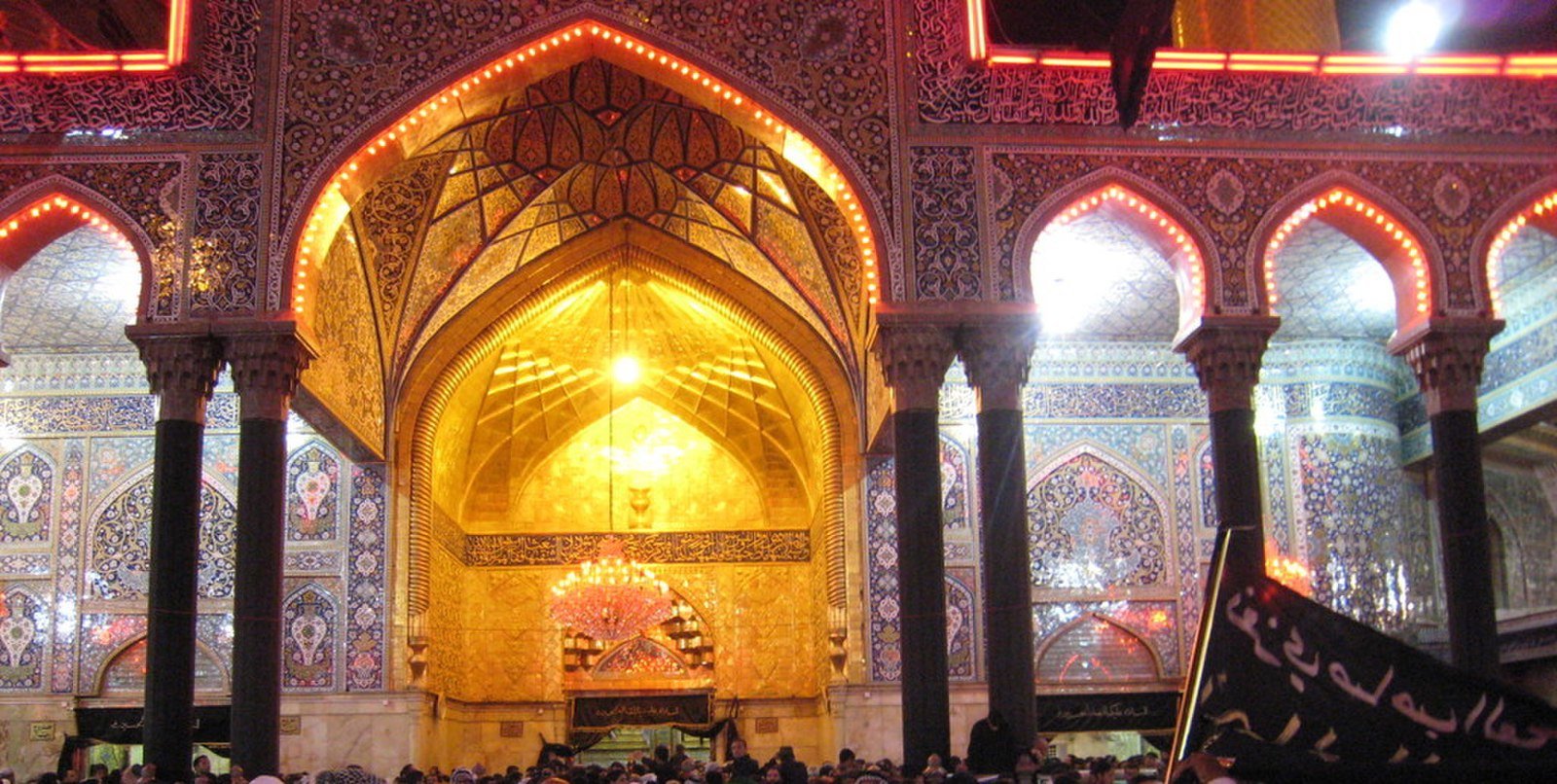 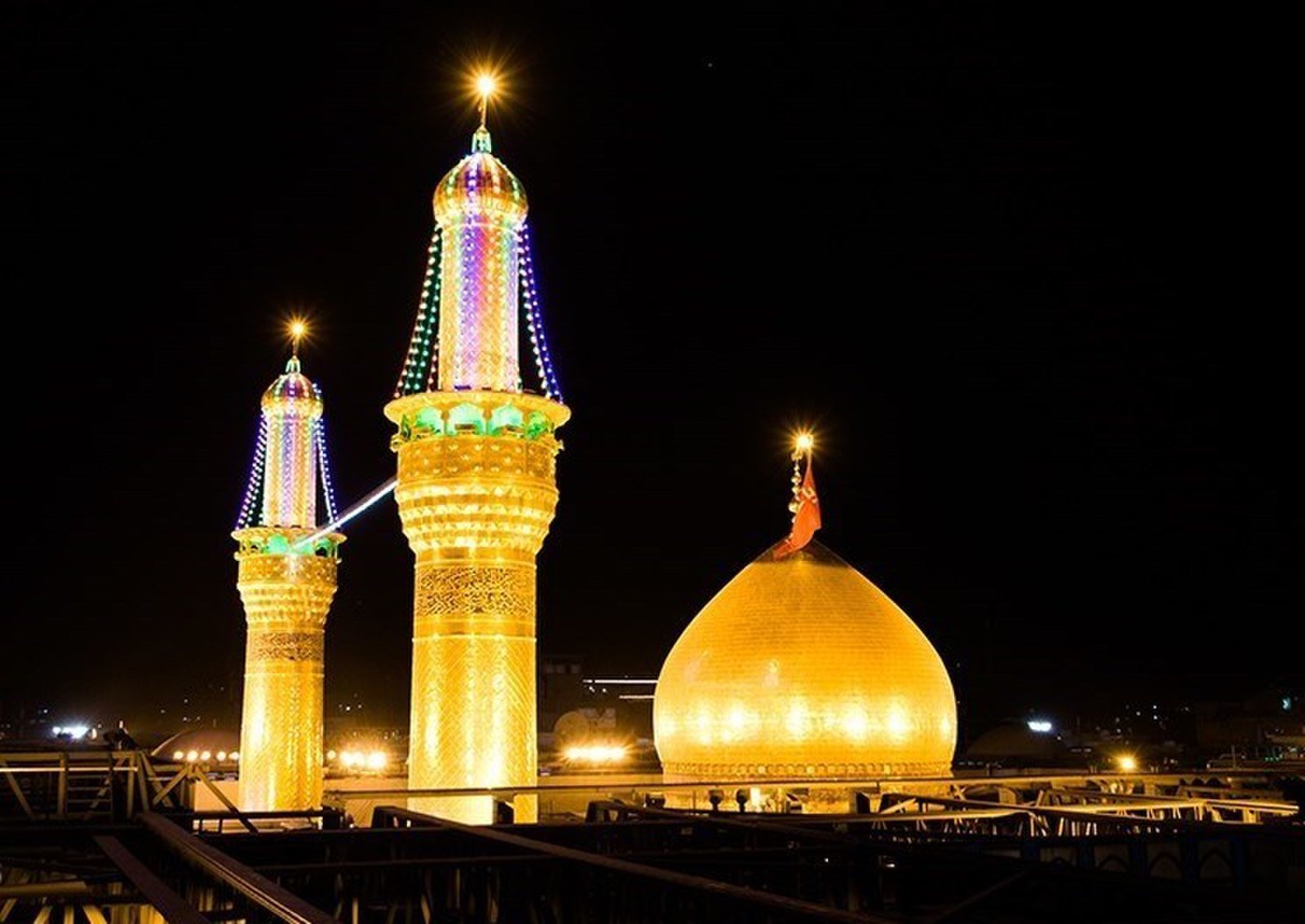 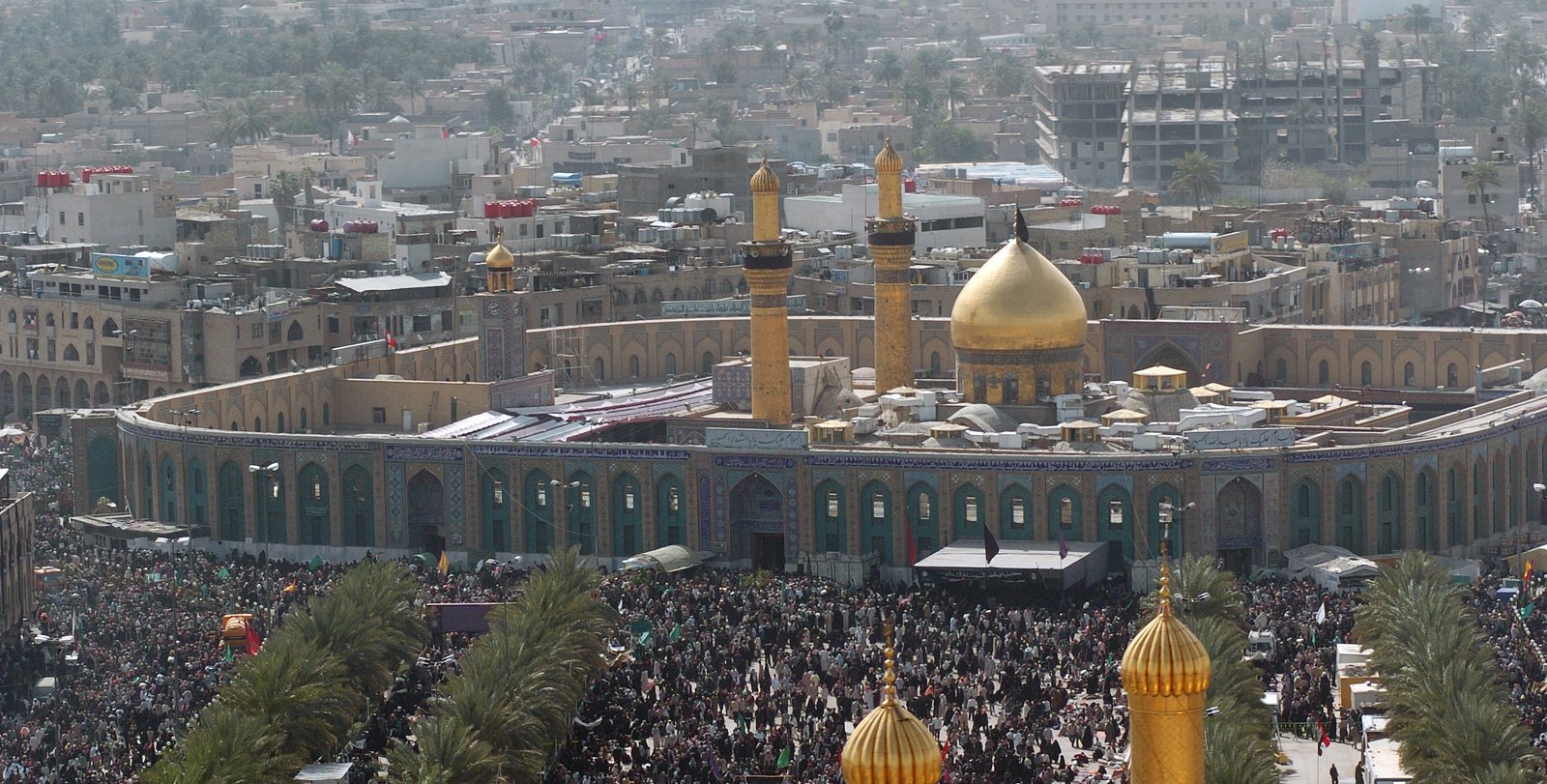 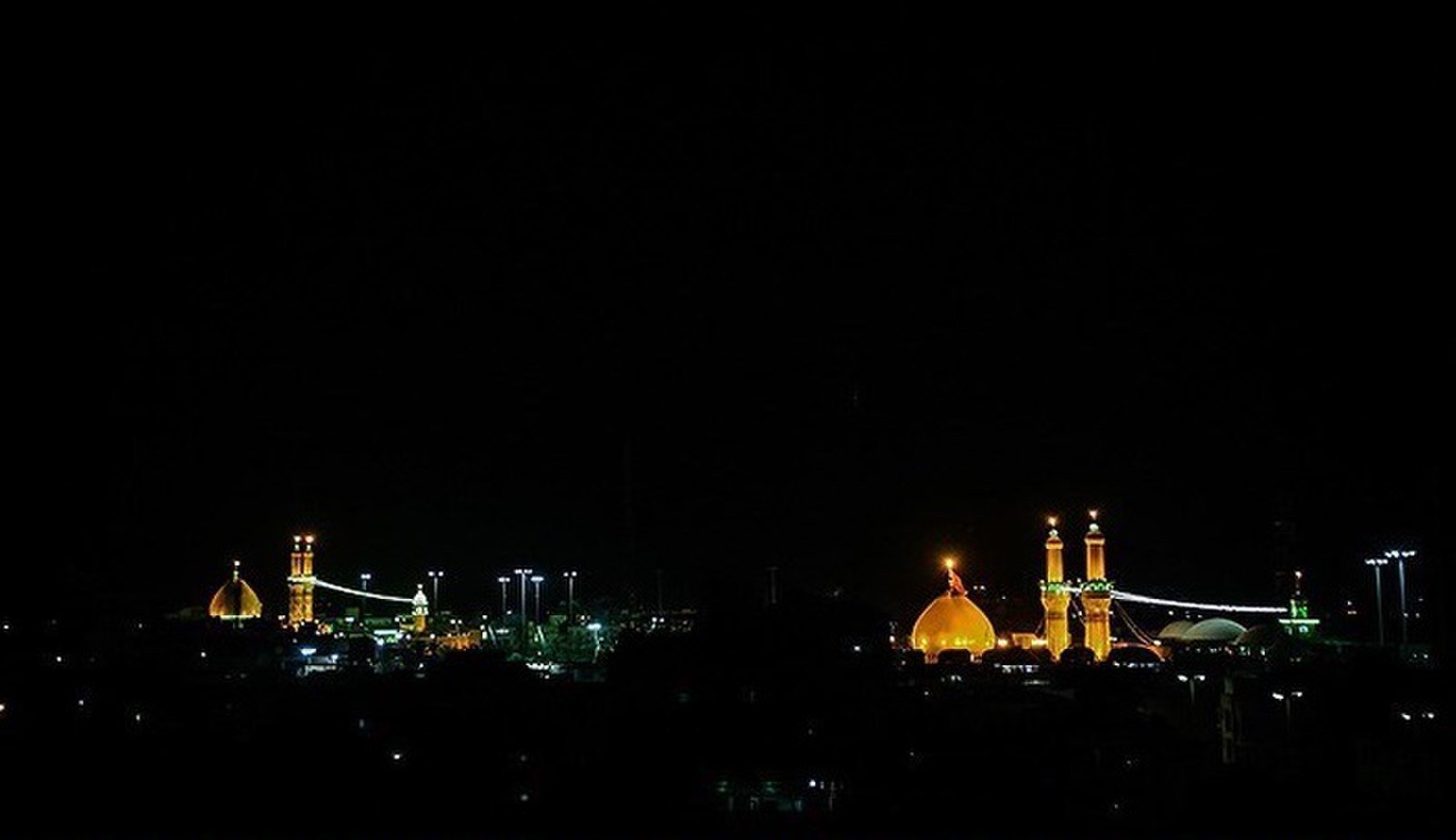 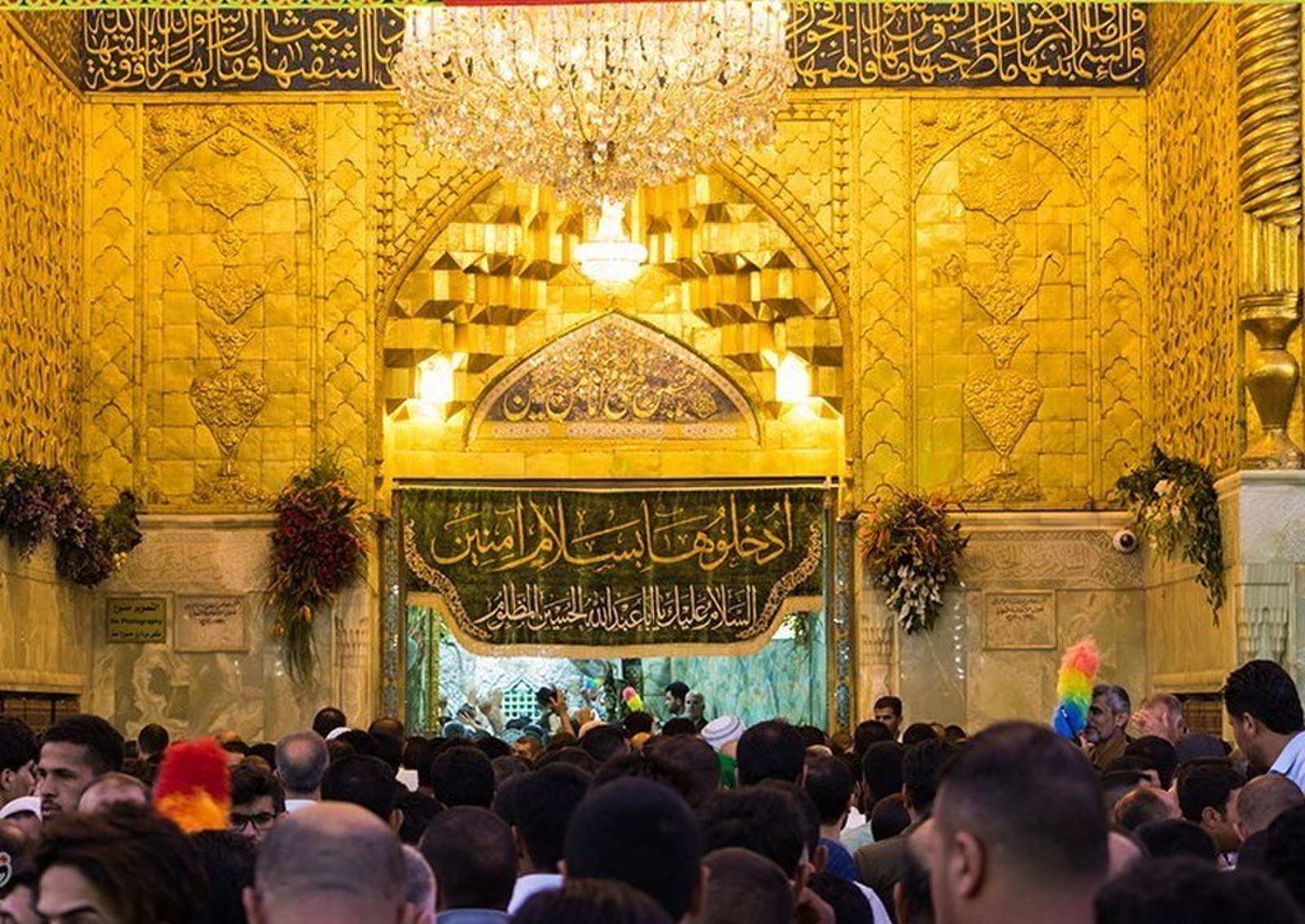 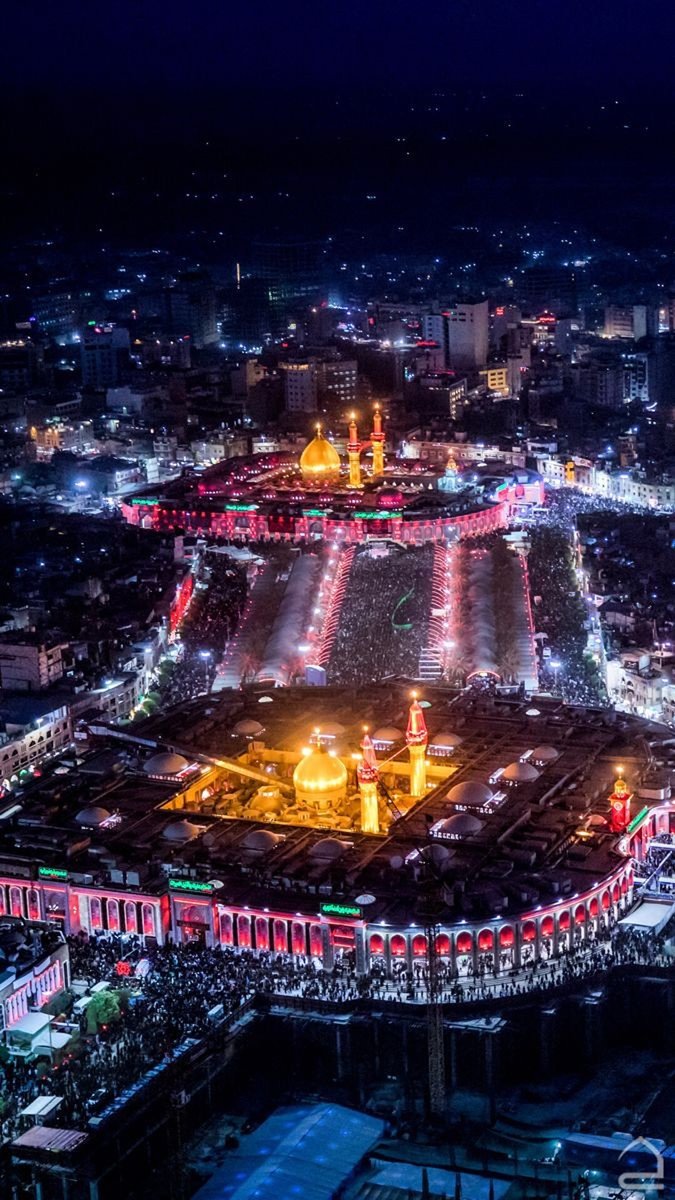