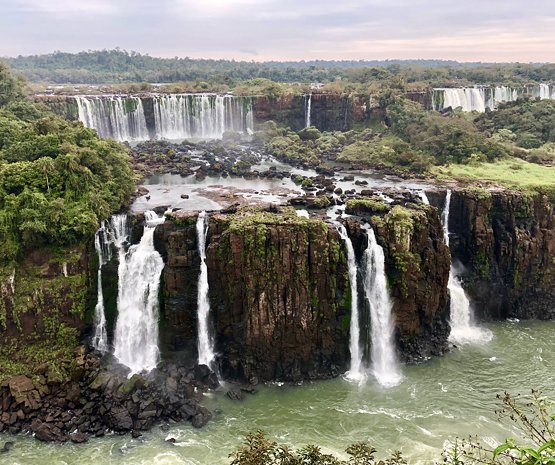 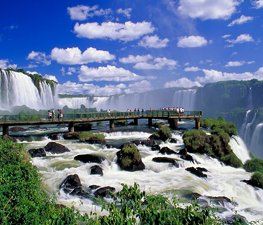 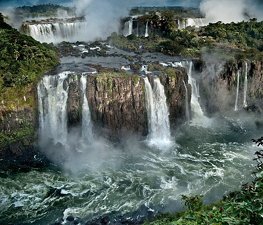 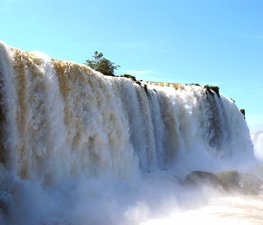 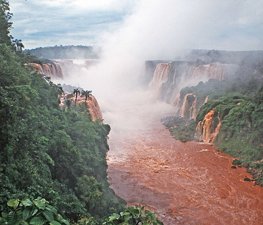 Iguazu Falls, Iguassu Falls, or Iguaçu Falls (português. Cataratas do Iguaçu Шаблон:Pronounced; español. Cataratas del Iguazú, Шаблон:IPA) are waterfalls of the Iguazu River located on the border of the Brazilian state of Paraná and the Argentine province of Misiones. The falls divide the river into the upper and lower Iguazu.

Their name comes from the Guarani or Tupi words y (IPA:[ɨ]) (water) and ûasú (IPA:[wa'su]) (big). Legend has it that a god planned to marry a beautiful aborigine named Naipí, who fled with her mortal lover Tarobá in a canoe. In rage, the god sliced the river creating the waterfalls, condemning the lovers to an eternal fall. The first European to find the falls was the Spanish Conquistador Álvar Núñez Cabeza de Vaca in 1541, after whom one of the falls in the Argentine side is named. The falls were rediscovered by Boselli at the end of the nineteenth century, and one of the Argentine falls is named after him.

Iguazu Falls was short-listed as a candidate to be one of the New7Wonders of Nature by the New Seven Wonders of the World Foundation. As of February 2009 it was ranking fifth in Group F, the category for lake, rivers, and waterfalls.

The waterfall system consists of 275 falls along 2.7 kilometers (1.67 miles) of the Iguazu River. Position is at latitude (DMS): 25° 40' 60 S, longitude (DMS): 54° 25' 60 W . Some of the individual falls are up to 82 meters (269 ft) in height, though the majority are about 64 metres (210 ft). The Devil's Throat (Шаблон:Lang in Spanish or Шаблон:Lang in Portuguese), a U-shaped, 82-meter-high, 150-meter-wide and 700-meter-long (490 by 2300 feet) cataract, is the most impressive of all, and marks the border between Argentina and Brazil. Two thirds of the falls are within Argentine territory. About 900 metres of the 2.7-kilometer length does not have water flowing over it. The edge of the basalt cap recedes only 3 mm per year. The water of the lower Iguazu collects in a canyon that drains into the Paraná River in Argentina, shortly downstream from the Itaipu dam.

The falls can be reached from the two main towns on either side of the falls: Foz do Iguaçu in the Brazilian state of Paraná, and Puerto Iguazú in the Argentine province of Misiones as well as from Ciudad del Este (Paraguay) on the other side of the Parana river from Foz do Iguaçu. The falls are shared by the Iguazú National Park (Argentina) and Iguaçu National Park (Brazil). These parks were designated UNESCO World Heritage Sites in 1984 and 1986, respectively.

On the Brazilian side there is a long walkway along the canyon with an extension to the lower base of the Devil's Throat. The Argentine access is facilitated by the Шаблон:Lang (Rainforest Ecological Train), which brings visitors to different walkways. The Paseo Garganta del Diablo is a one-kilometer-long trail that brings the visitor directly over the falls of the Devil's Throat. Other walkways allow access to the elongated stretch of falls on the Argentine side and to the ferry that connects to the San Martin island.

Comparisons to other famous falls

Upon seeing Iguazu, the United States' First Lady Eleanor Roosevelt reportedly exclaimed "Poor Niagara!" Iguazu is also often compared with Southern Africa's Victoria Falls which separates Zambia and Zimbabwe. Whilst Iguazu is wider because it is split into about 270 discrete falls and large islands, Victoria is the largest curtain of water in the world, at over 1600 m wide and over 100 m (350 ft) in height (in low flow Victoria is split into five by islands; in high flow it can be uninterrupted). The only wider falls are extremely large rapid-like falls such as the Boyoma Falls). With the flooding of the Guaíra Falls in 1982, Iguazu currently has the greatest average annual flow of any waterfall in the world.

Iguazu, however, affords better views and walkways and its shape allows for spectacular vistas. At one point a person can stand and be surrounded by 260 degrees of waterfalls. The Devil's Throat has water pouring into it from three sides. Likewise, because Iguazu is split into many relatively small falls, one can view these a portion at a time. Victoria does not allow this, as it is essentially one waterfall that falls into a canyon and is too immense to appreciate at once (except from the air).

Шаблон:Trivia Some movies/TV the Falls were featured in:

Matthias
An absolute fantastic adventure of nature. A never ending series of waterfalls with immense power.Hard to describe.You have to experience it!???????? (Preferably with a boat tour taking you IN the falls????

Paula Madeira
AMAZING!!! So much better and more beautiful than the peninsula the brazilian side! And the park is huge, reserve the whole day, get there early and do the Aventura Nautica excursion!!! It's a must!

E K K
Enter park early & work your way through the green trail, then explore the inferior trail, the devil's throat and then the superior trail. A waterproof sleeve for camera/phones plus secure strap.

Ivan Preti
It's mandatory to take the boat ride if you want to go wet and wild getting under the waterfall and having a scenic spot to take pictures (only if your cam is waterproof). The captain is realy skilled

Alerrandro Correa
One of the most beautiful places on earth. Good place for pictures is the floor above elevator entrance. Skip the line for it and just go upstairs. Fewer people and higher view.
Load more comments
foursquare.com
9.0/10
Aleksei Vesnin, 憑き狐娘 and 631,693 more people have been here
I've been here
Add to wishlist 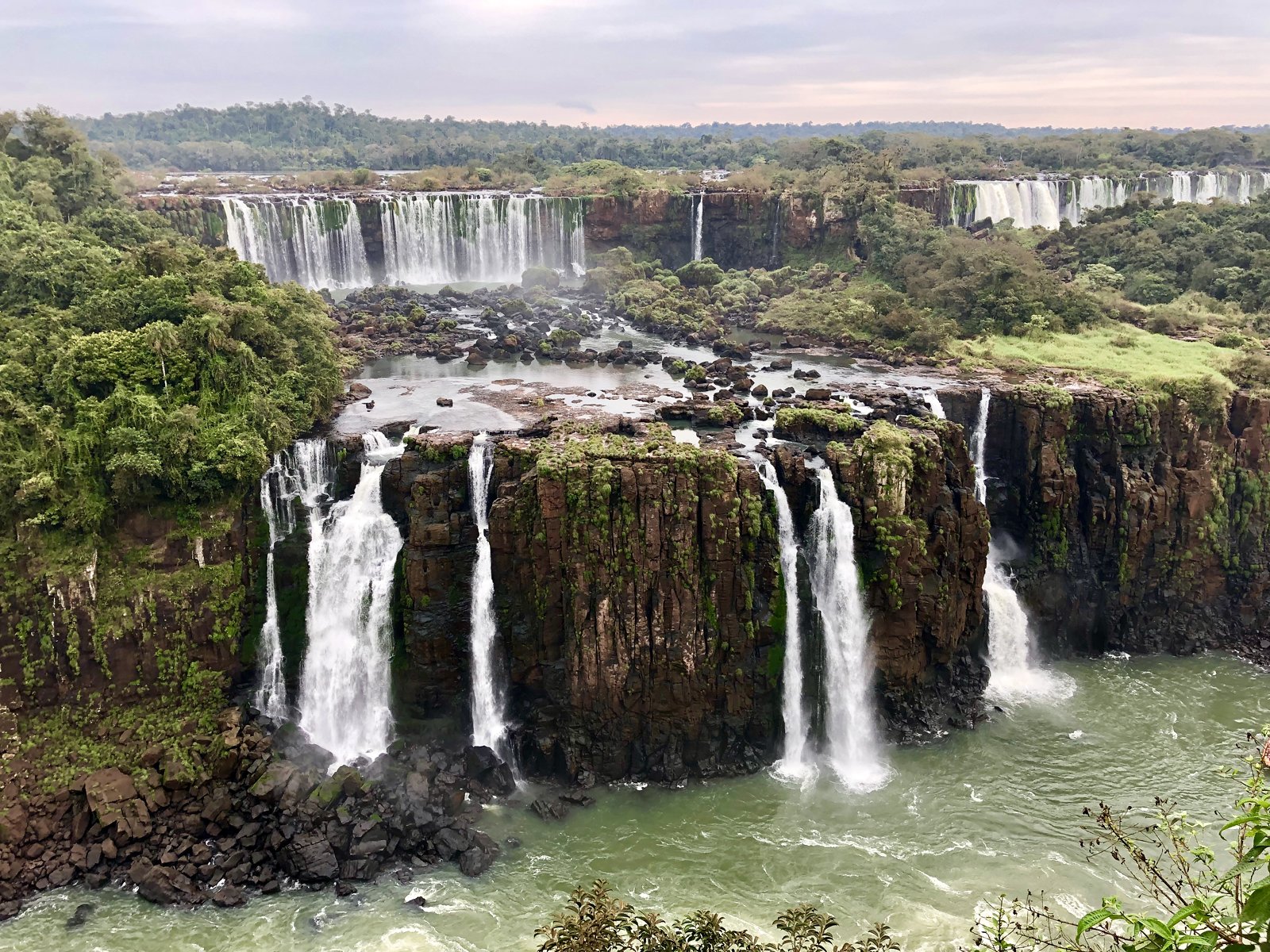 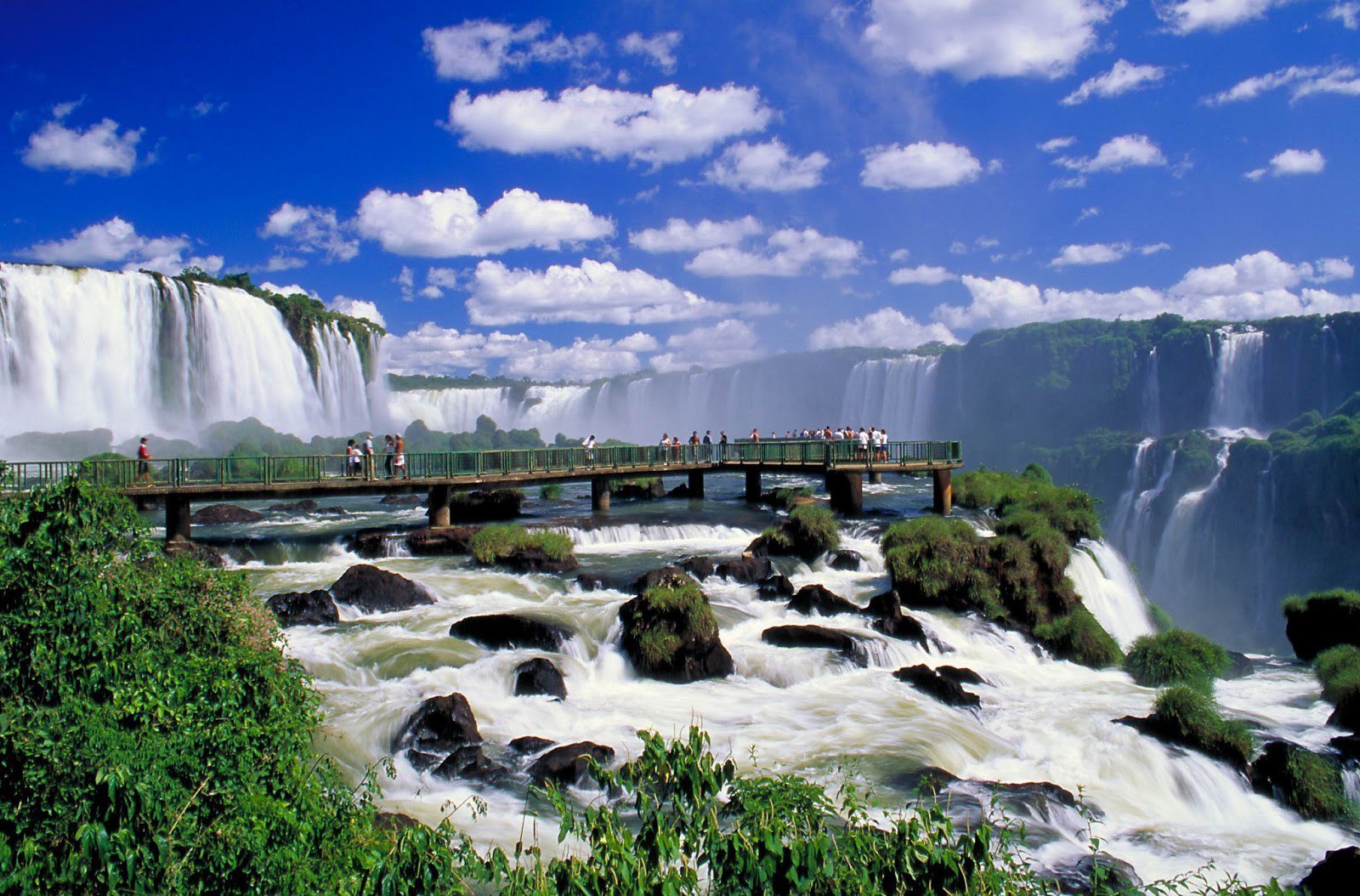 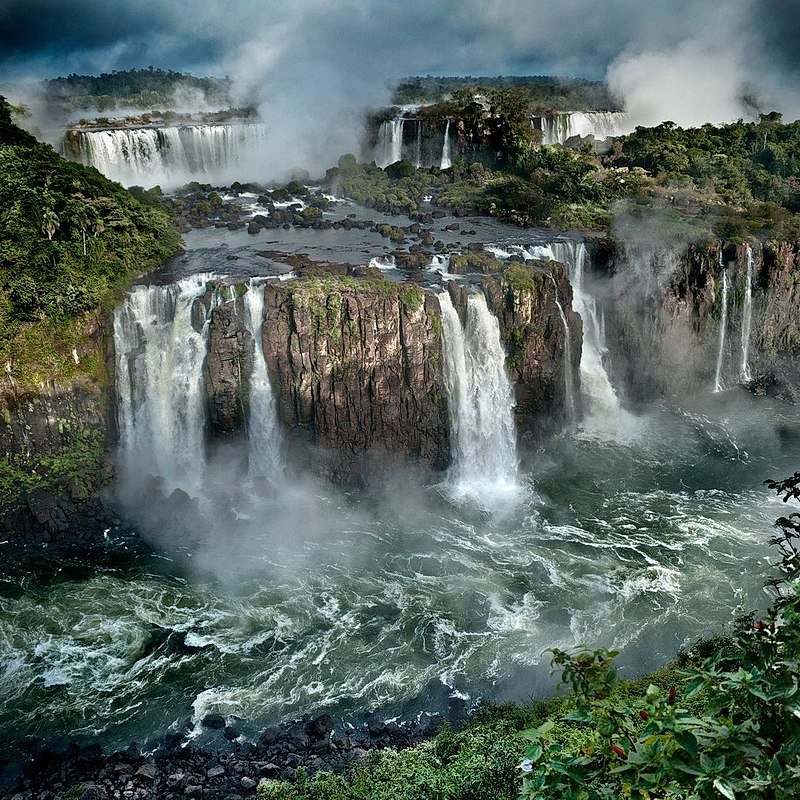 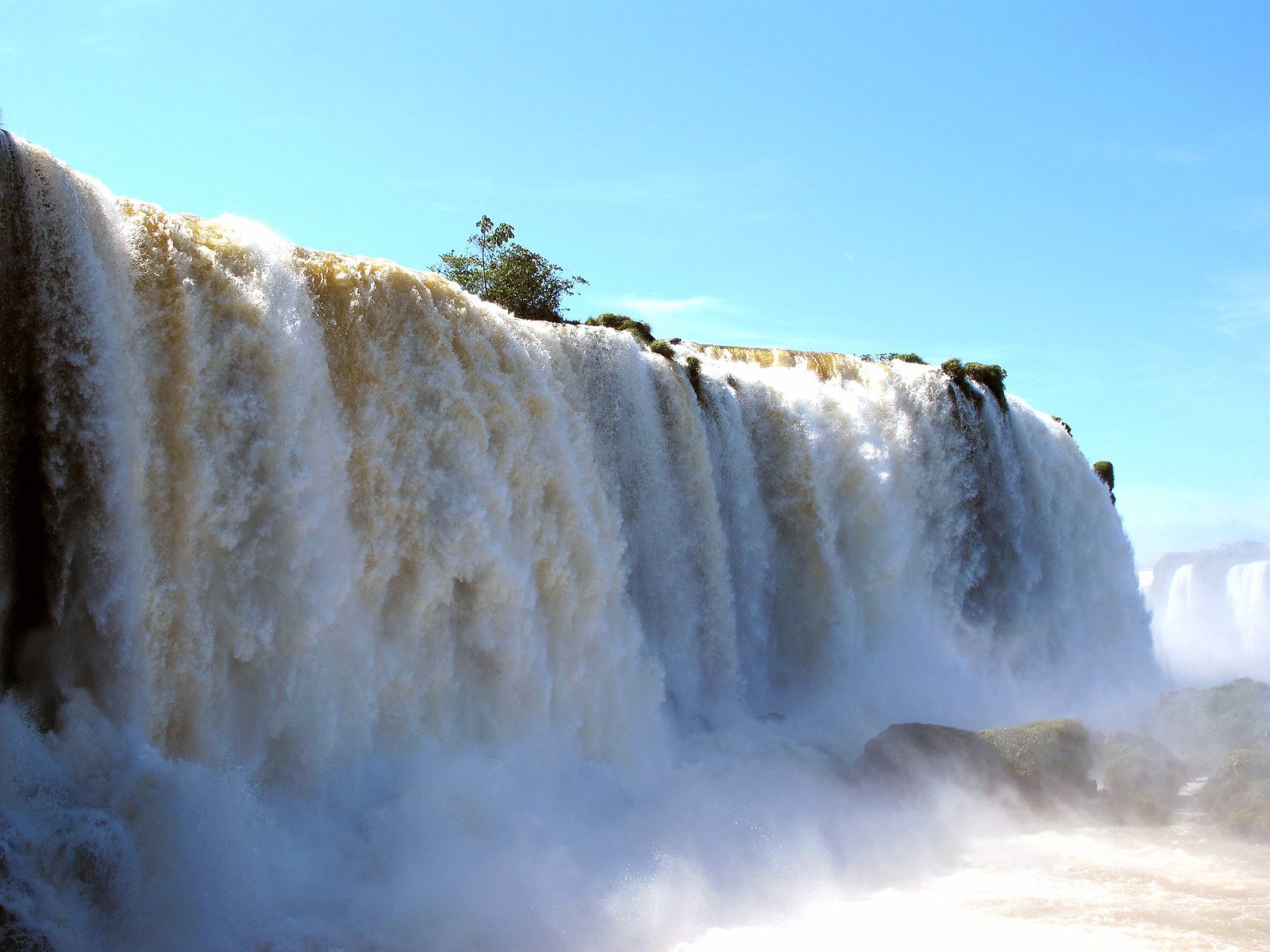 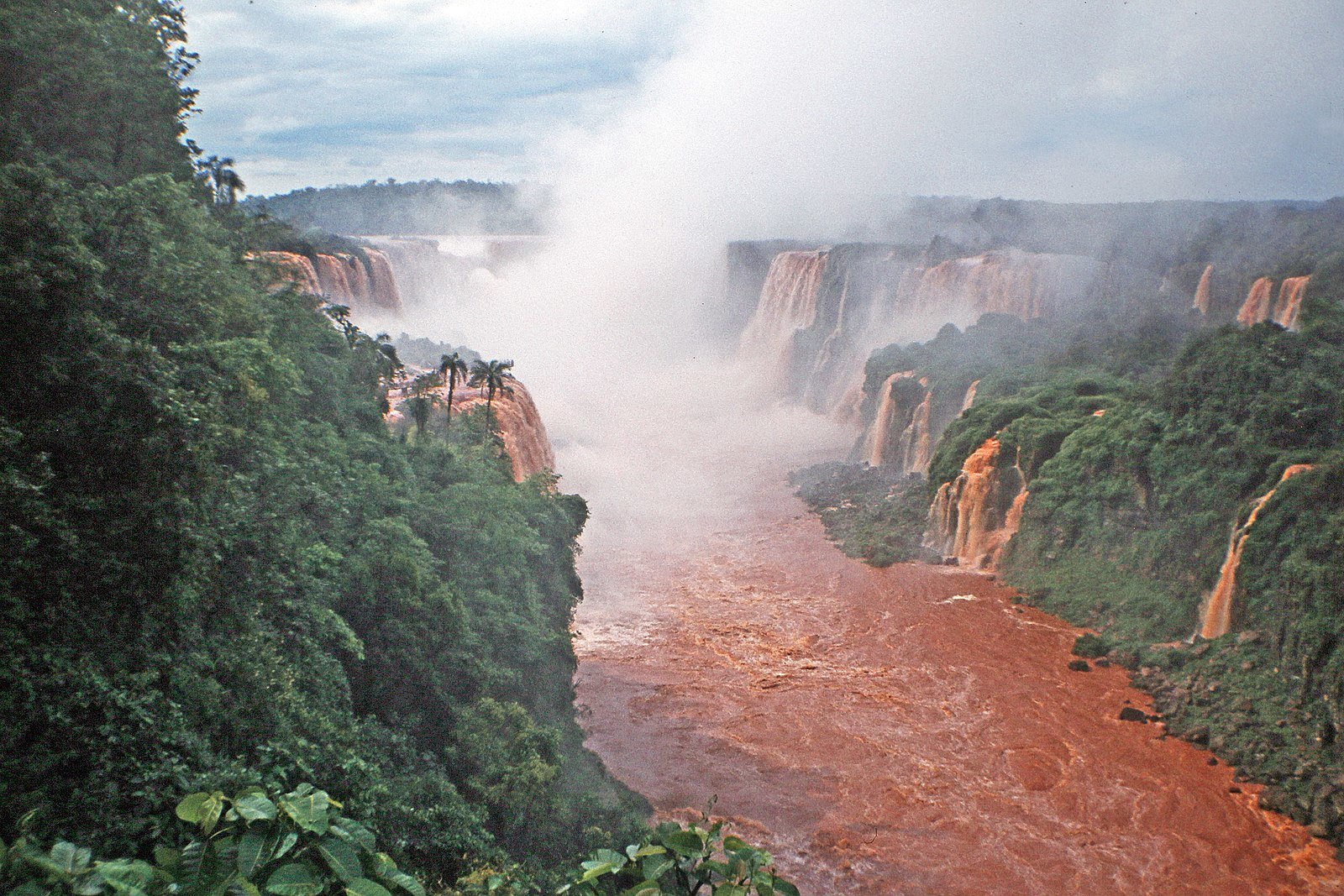 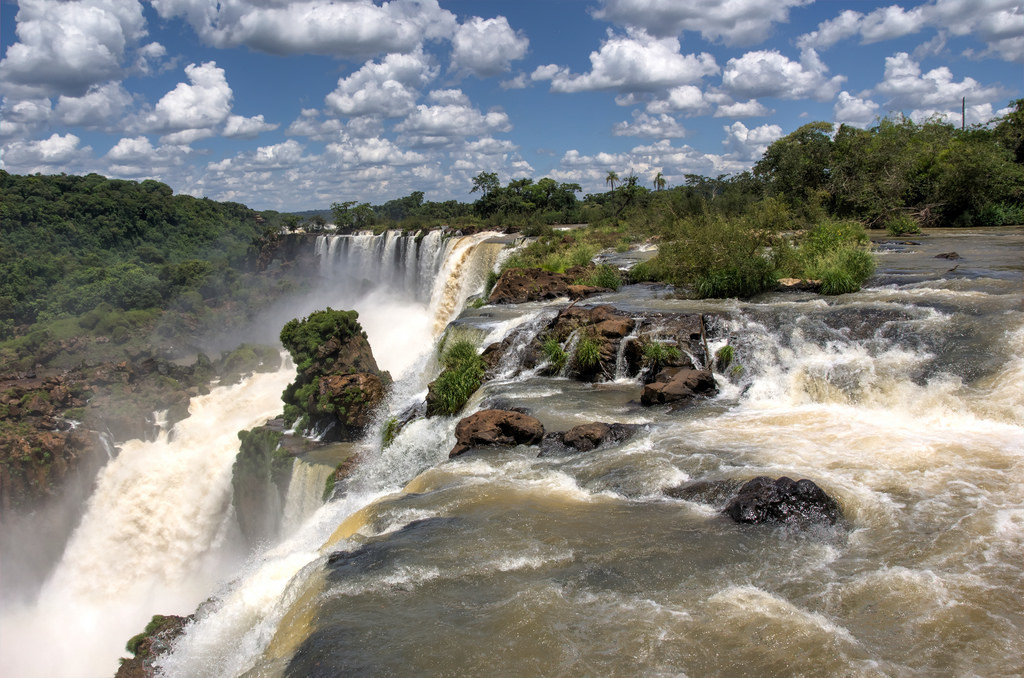 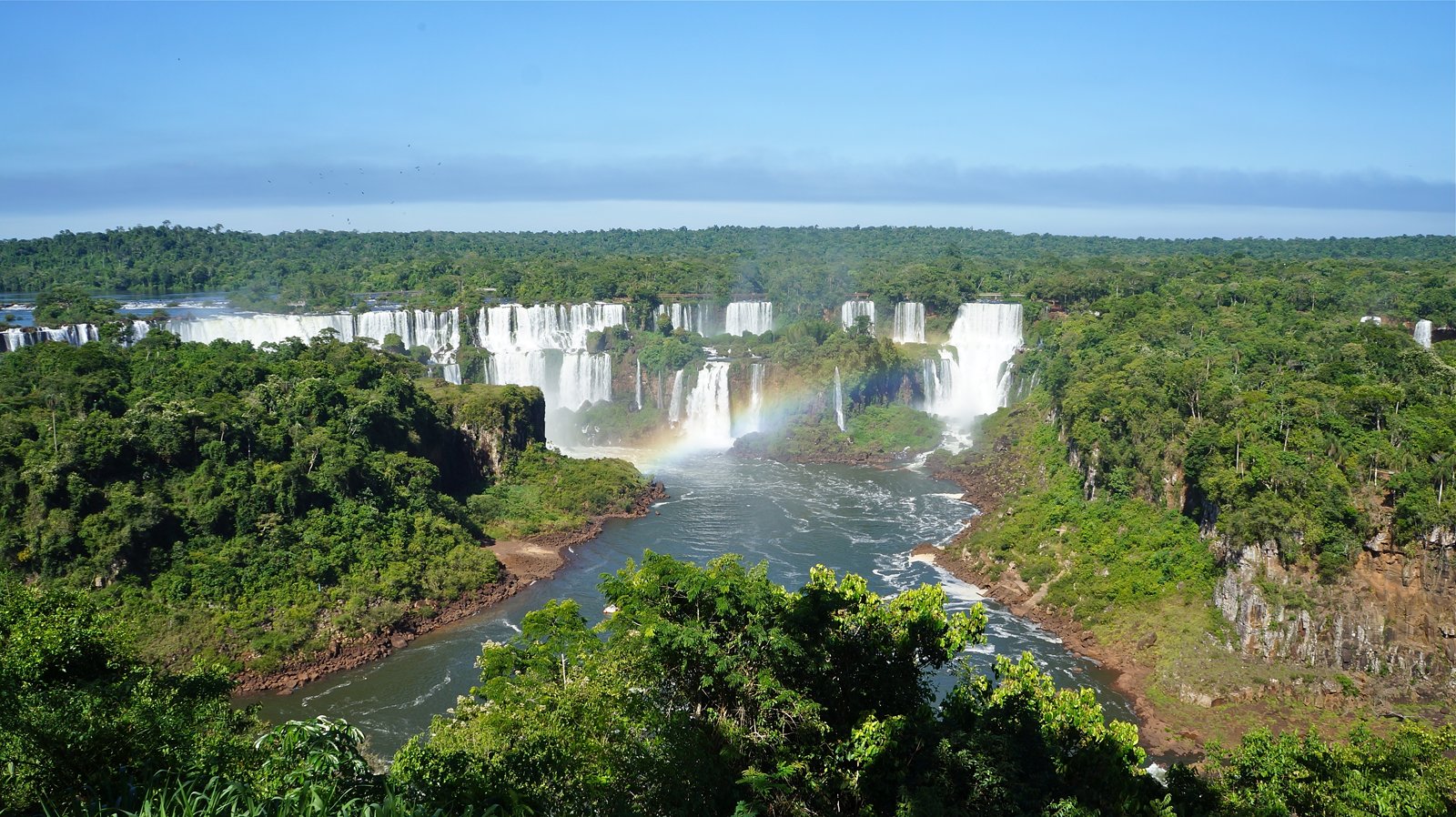 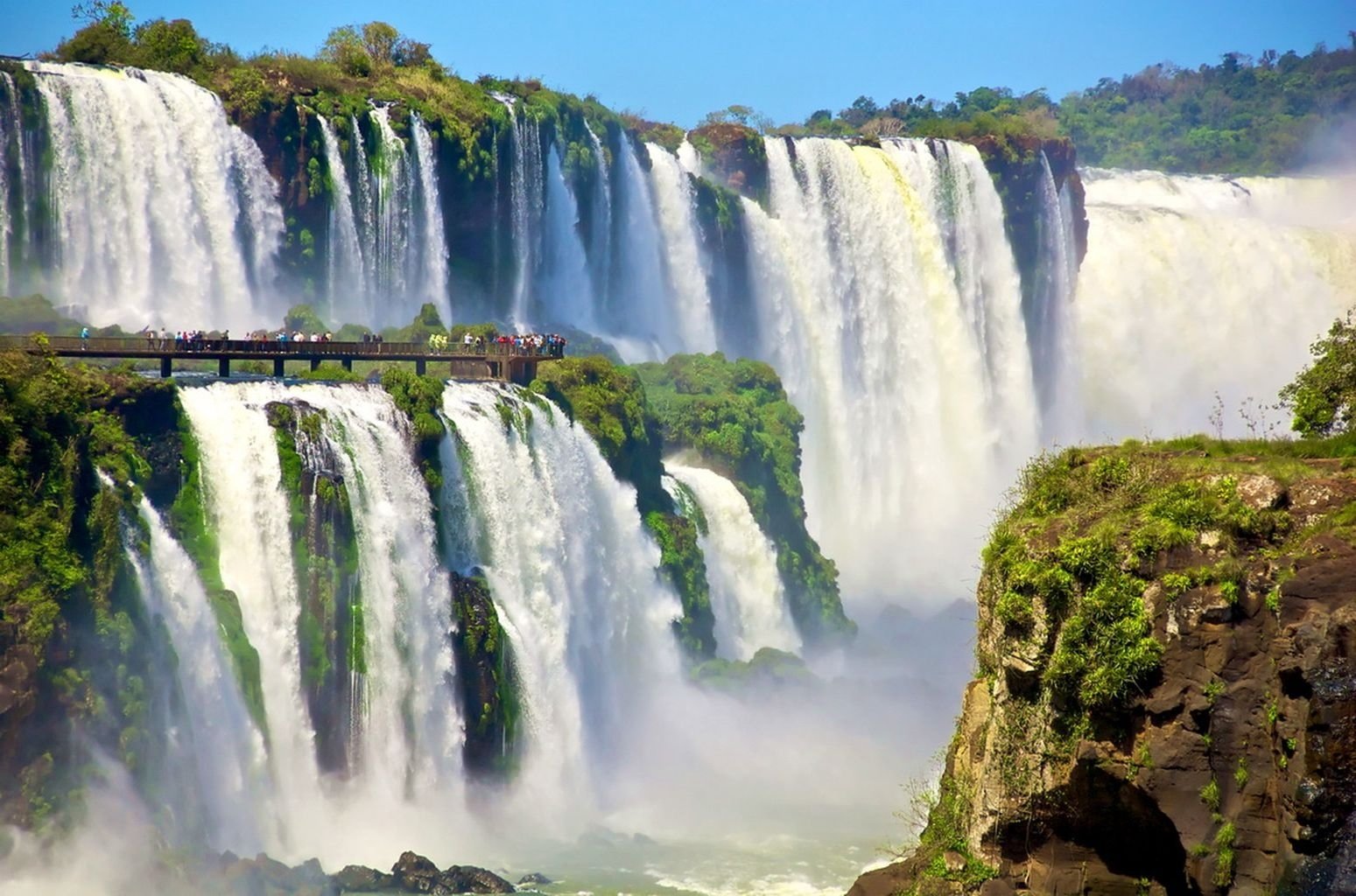 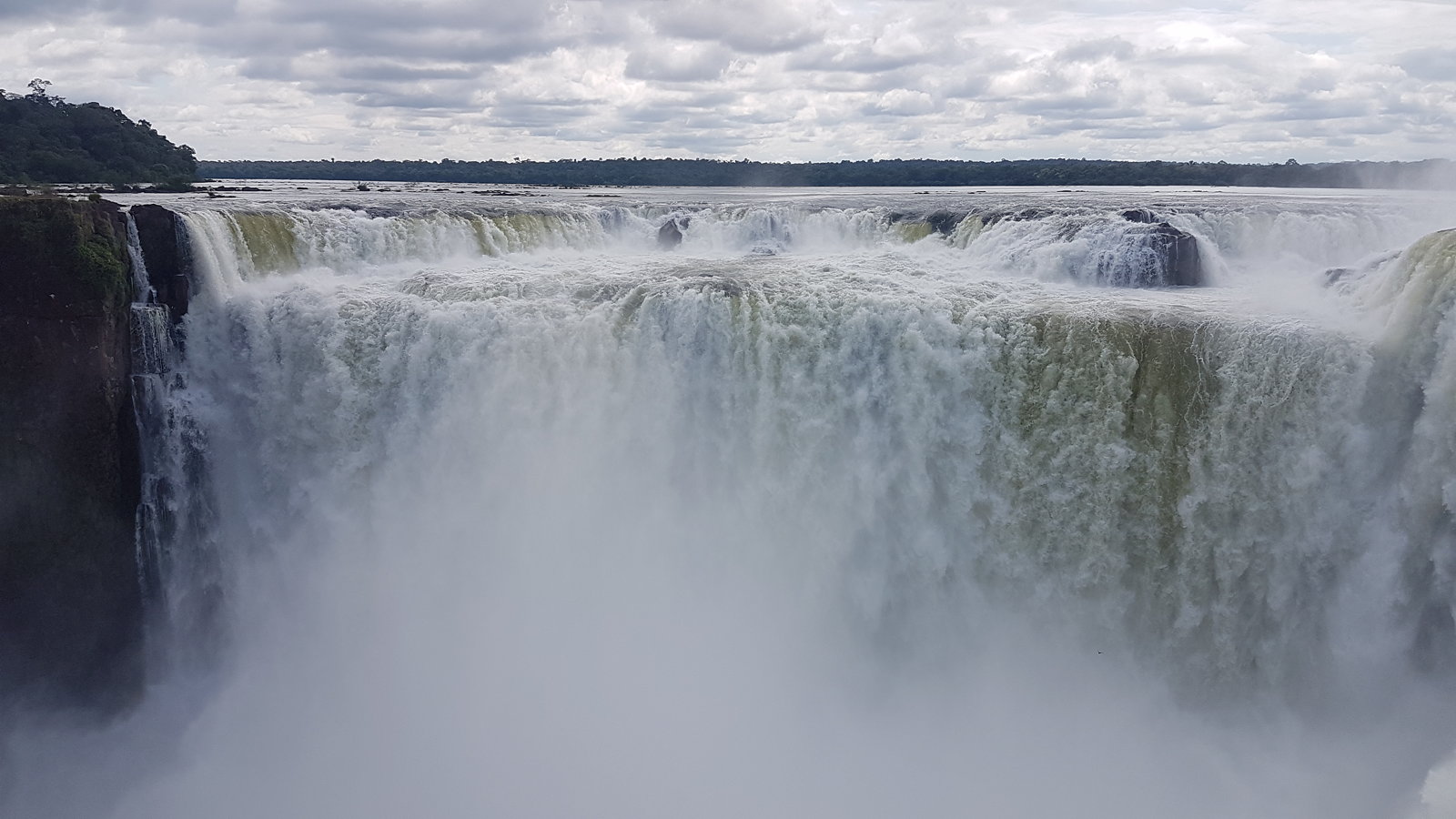 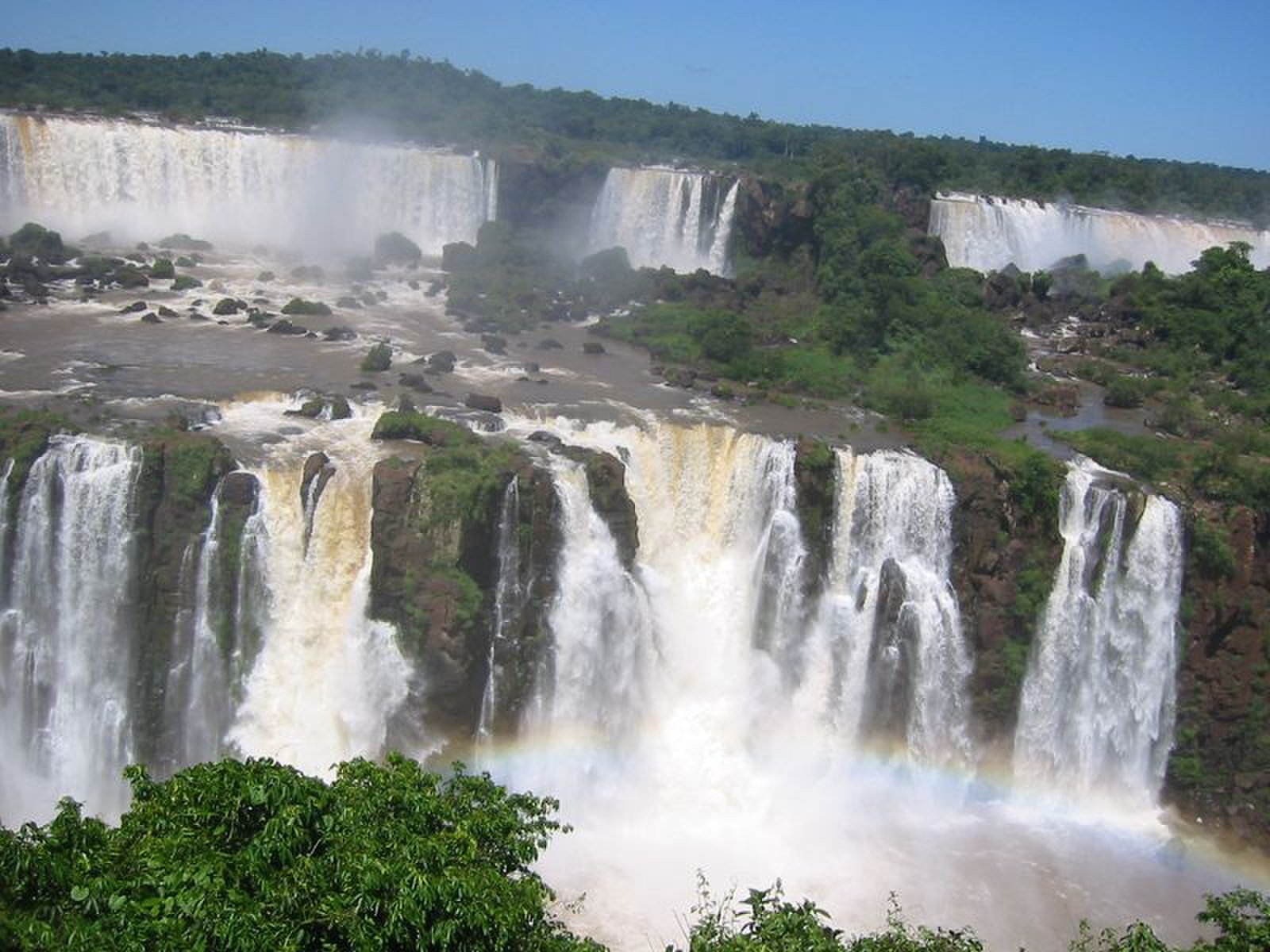 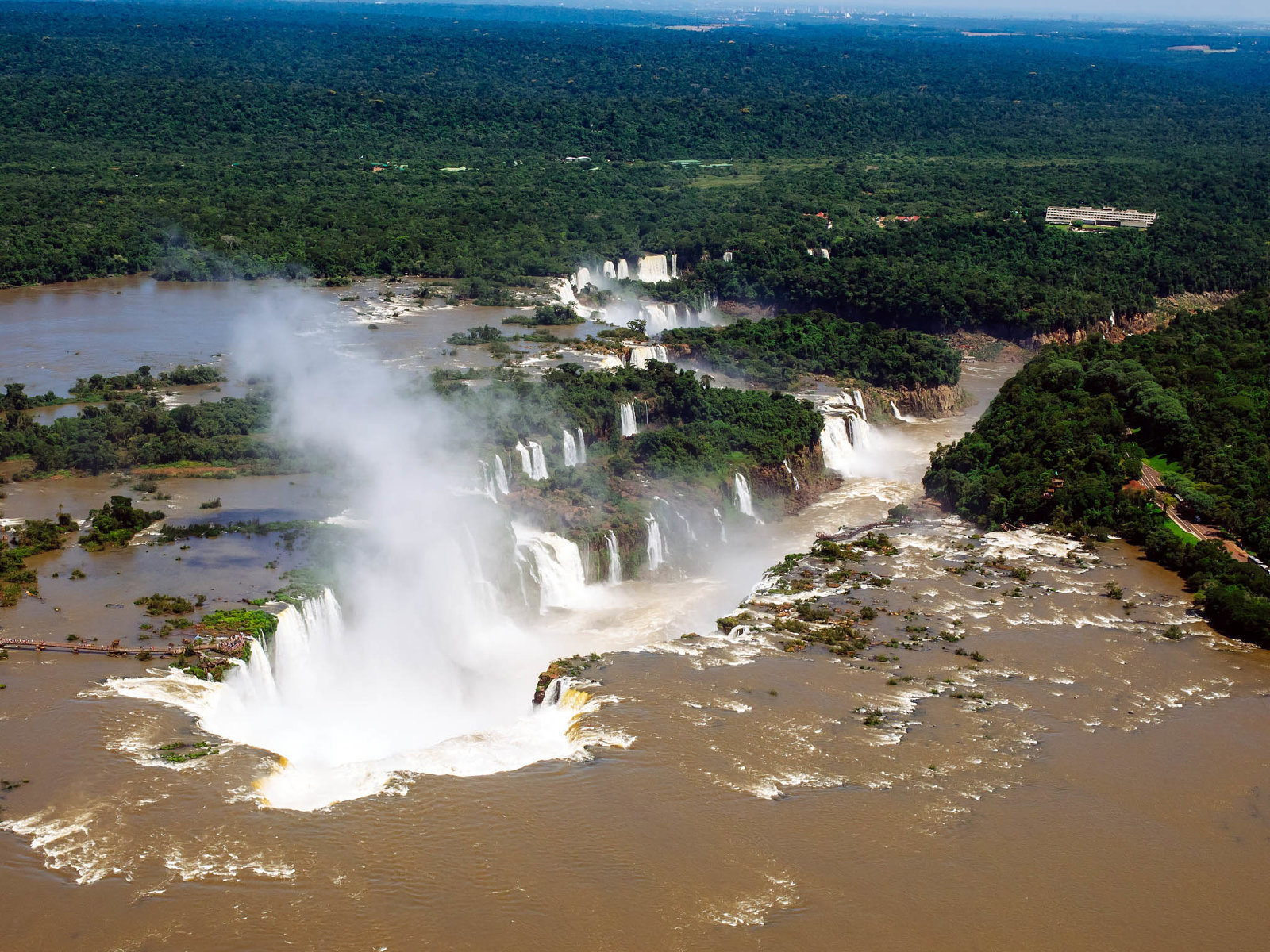 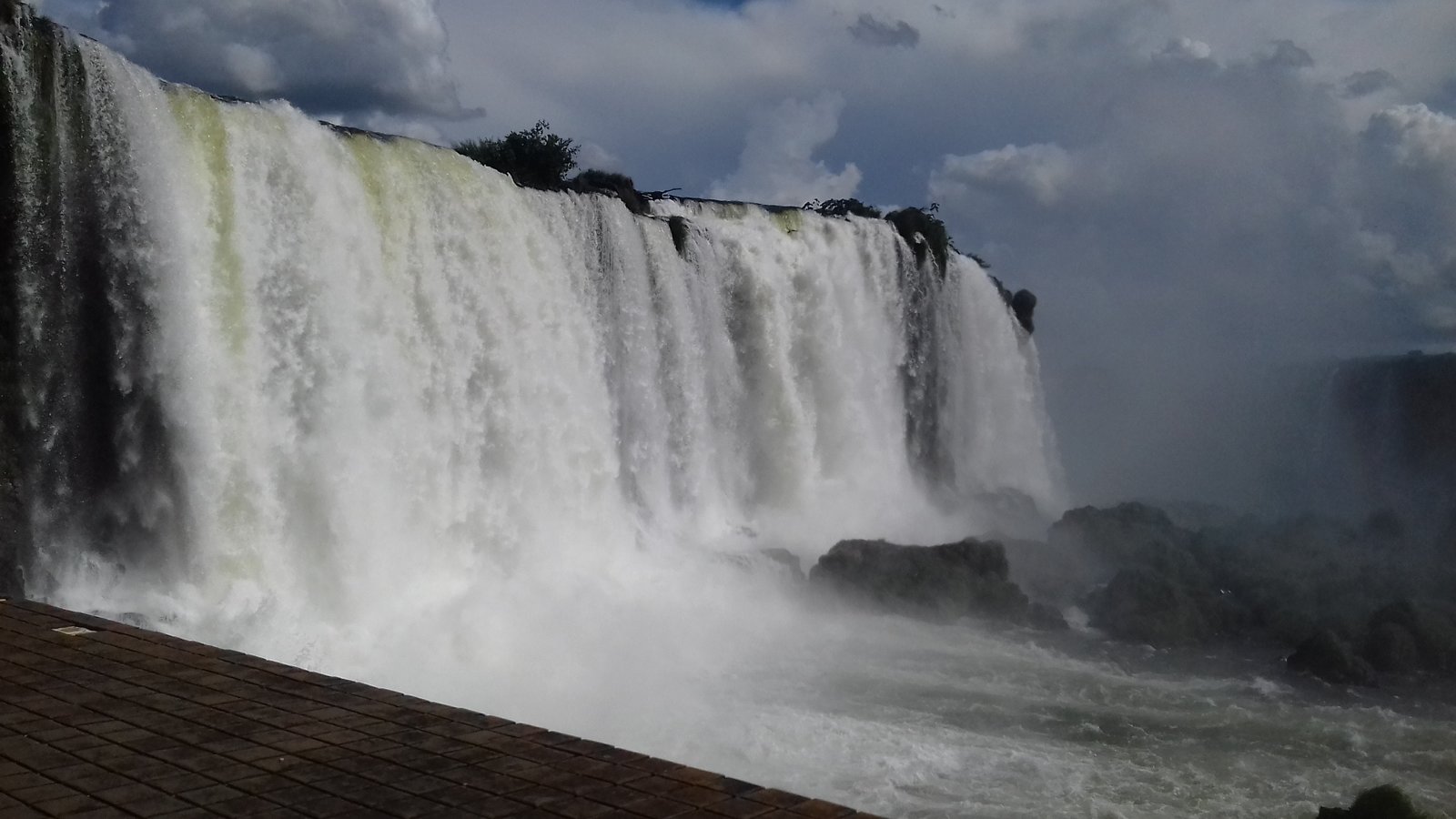 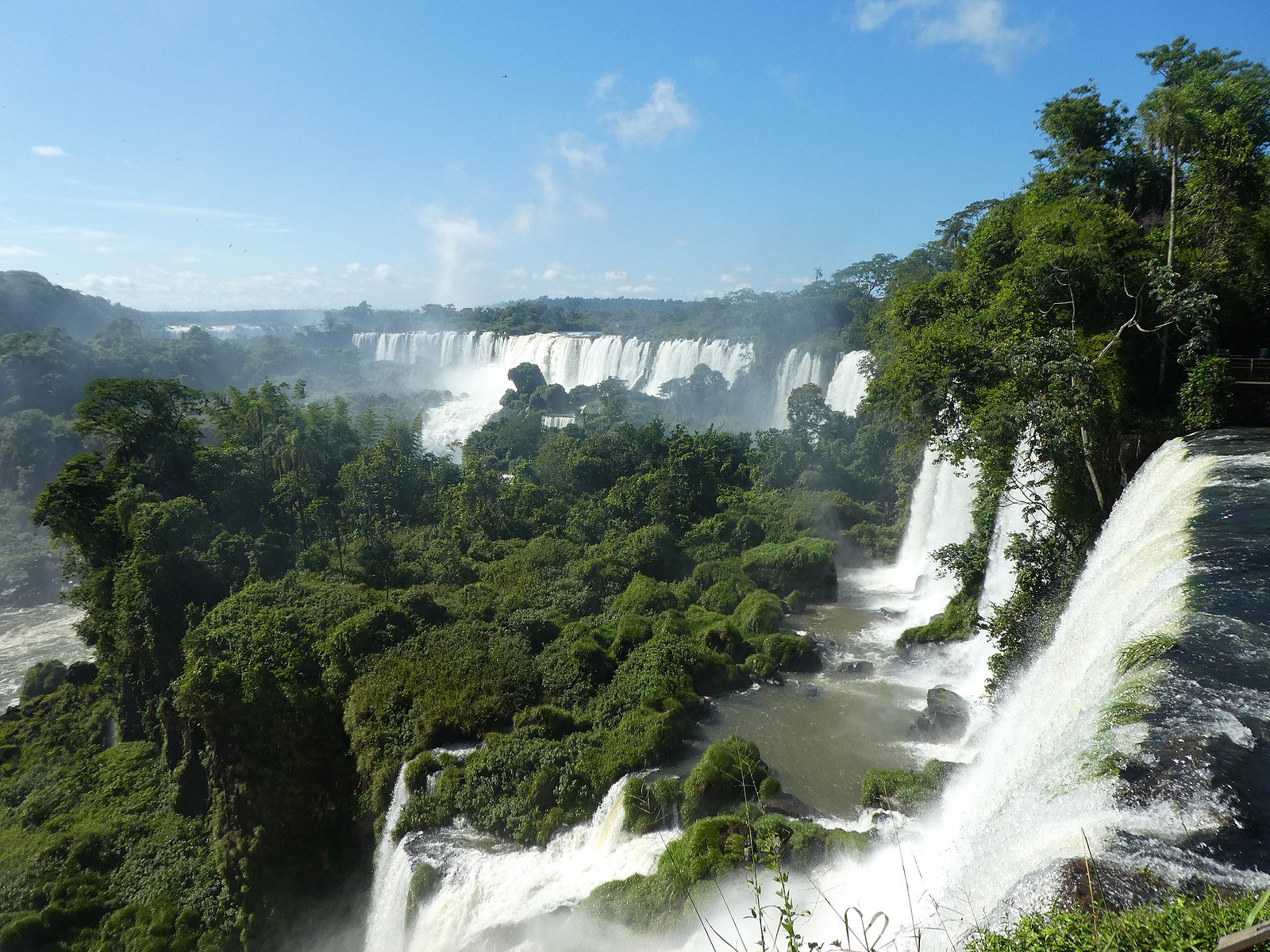 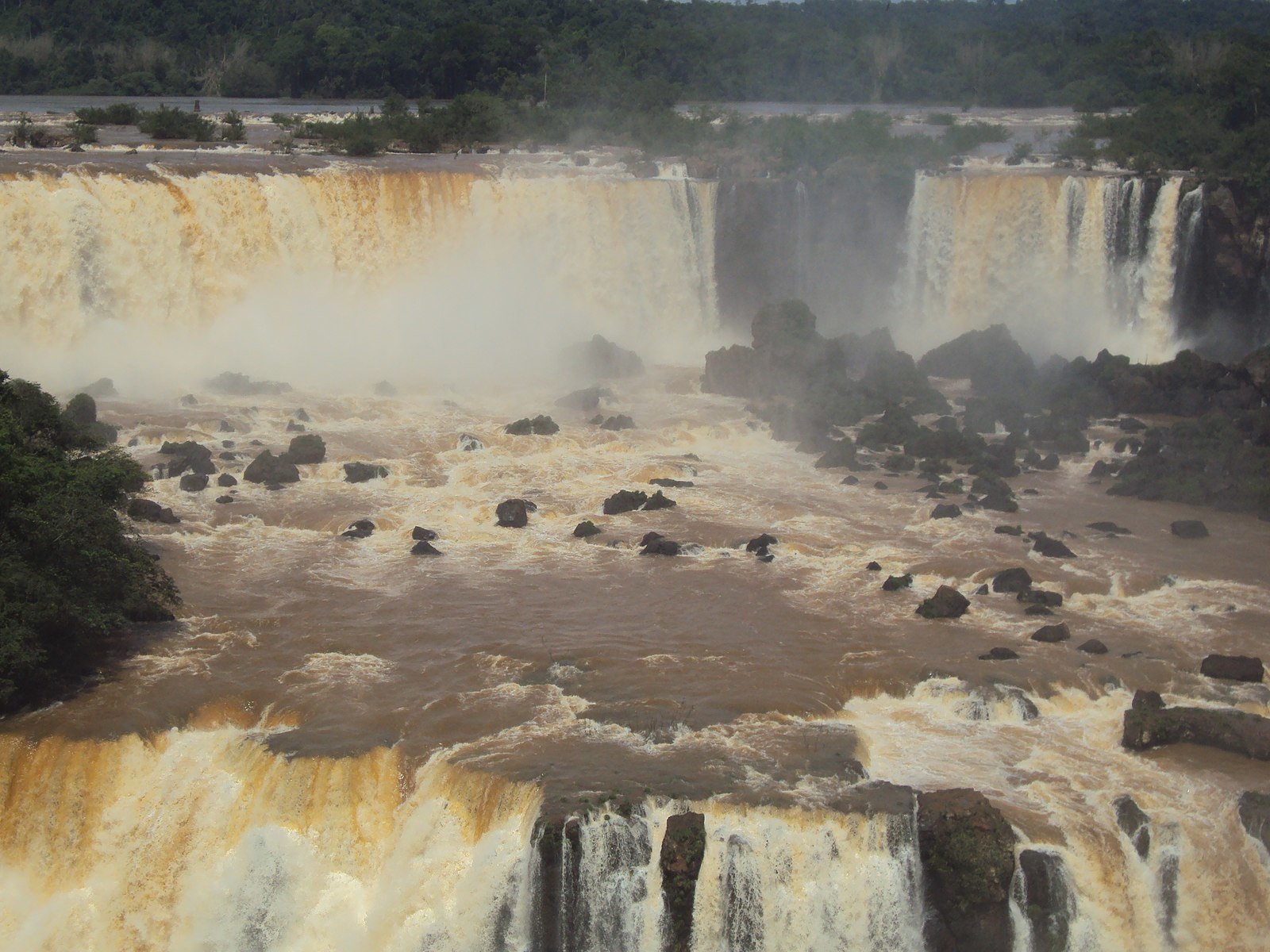 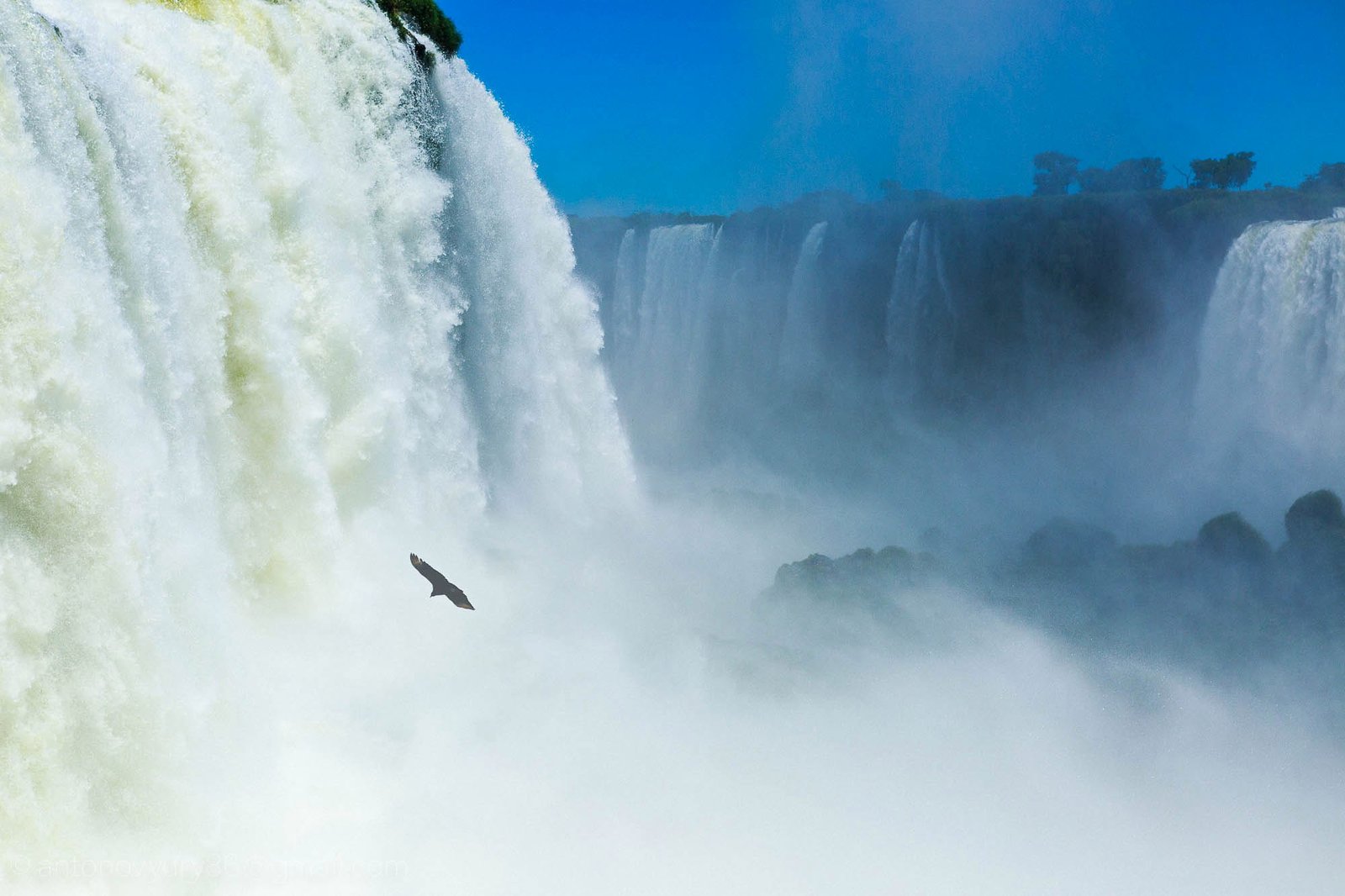 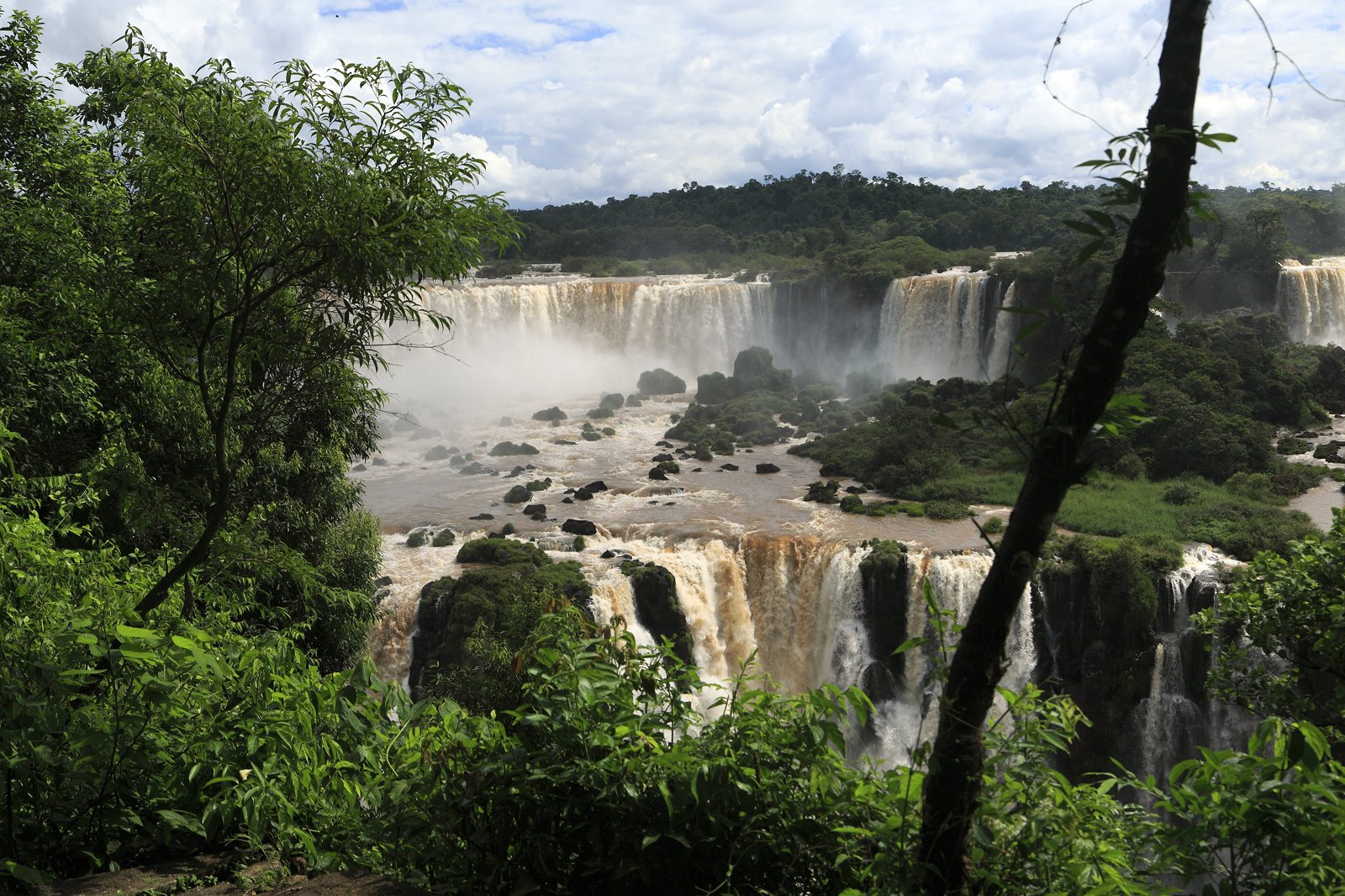 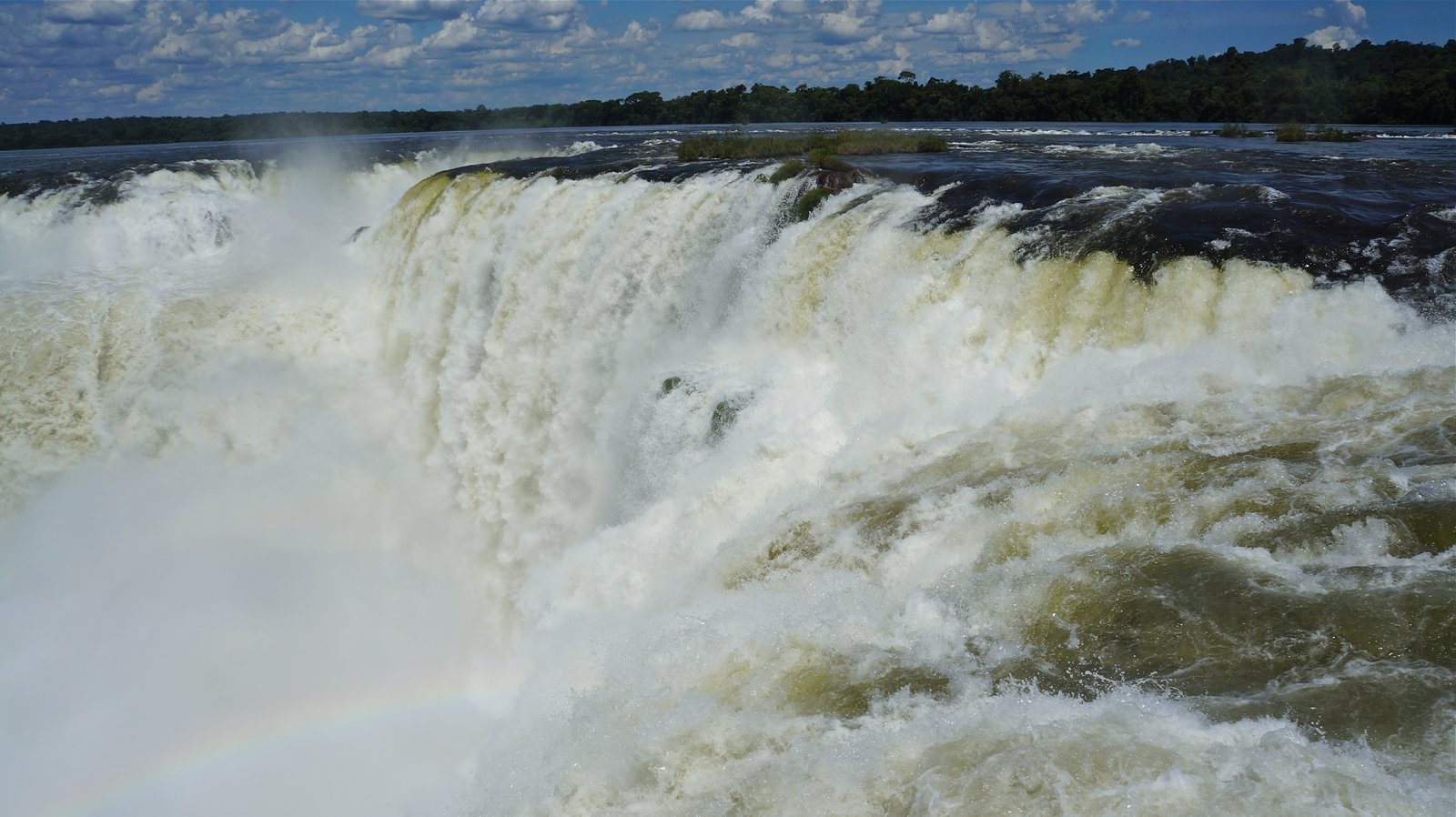 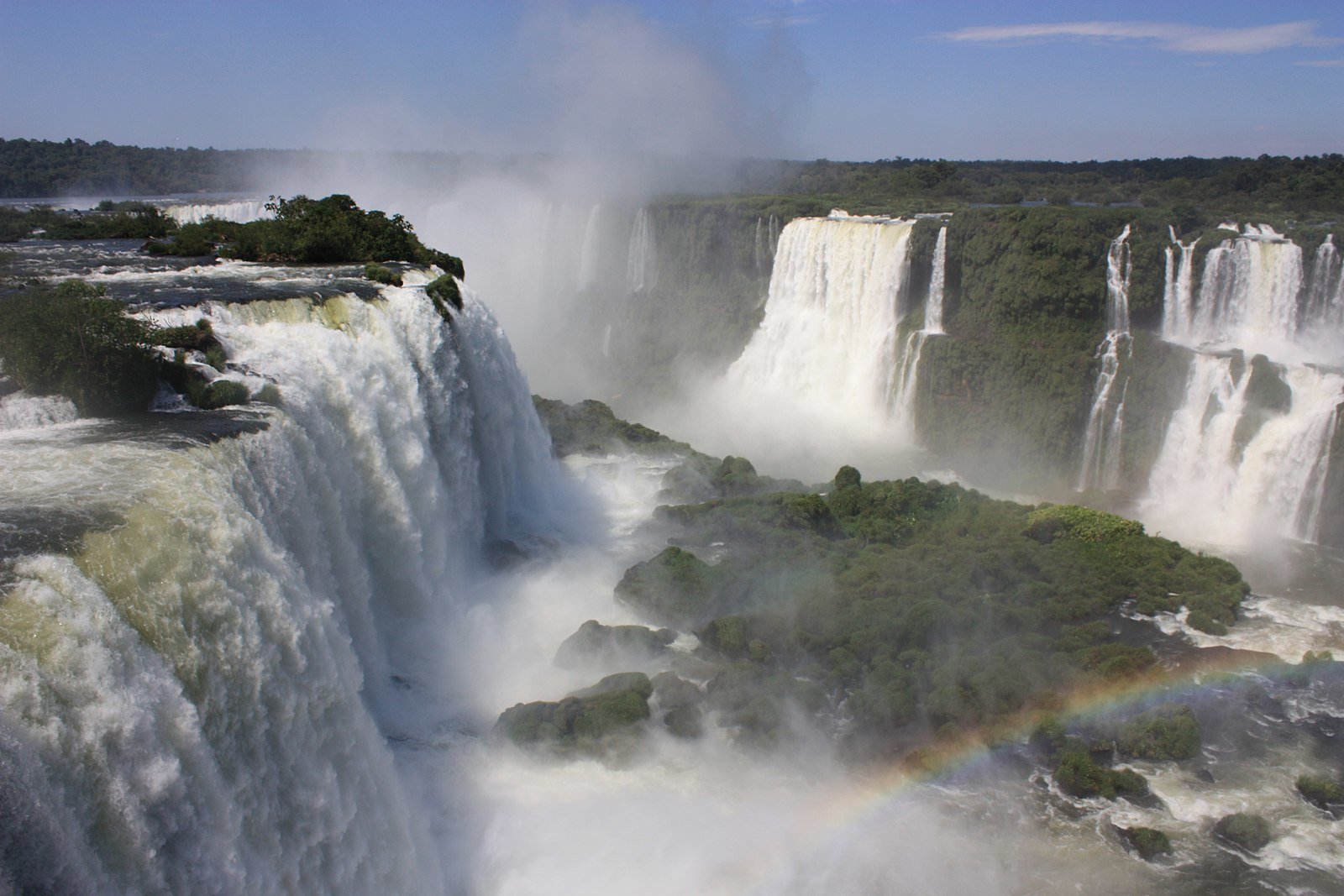 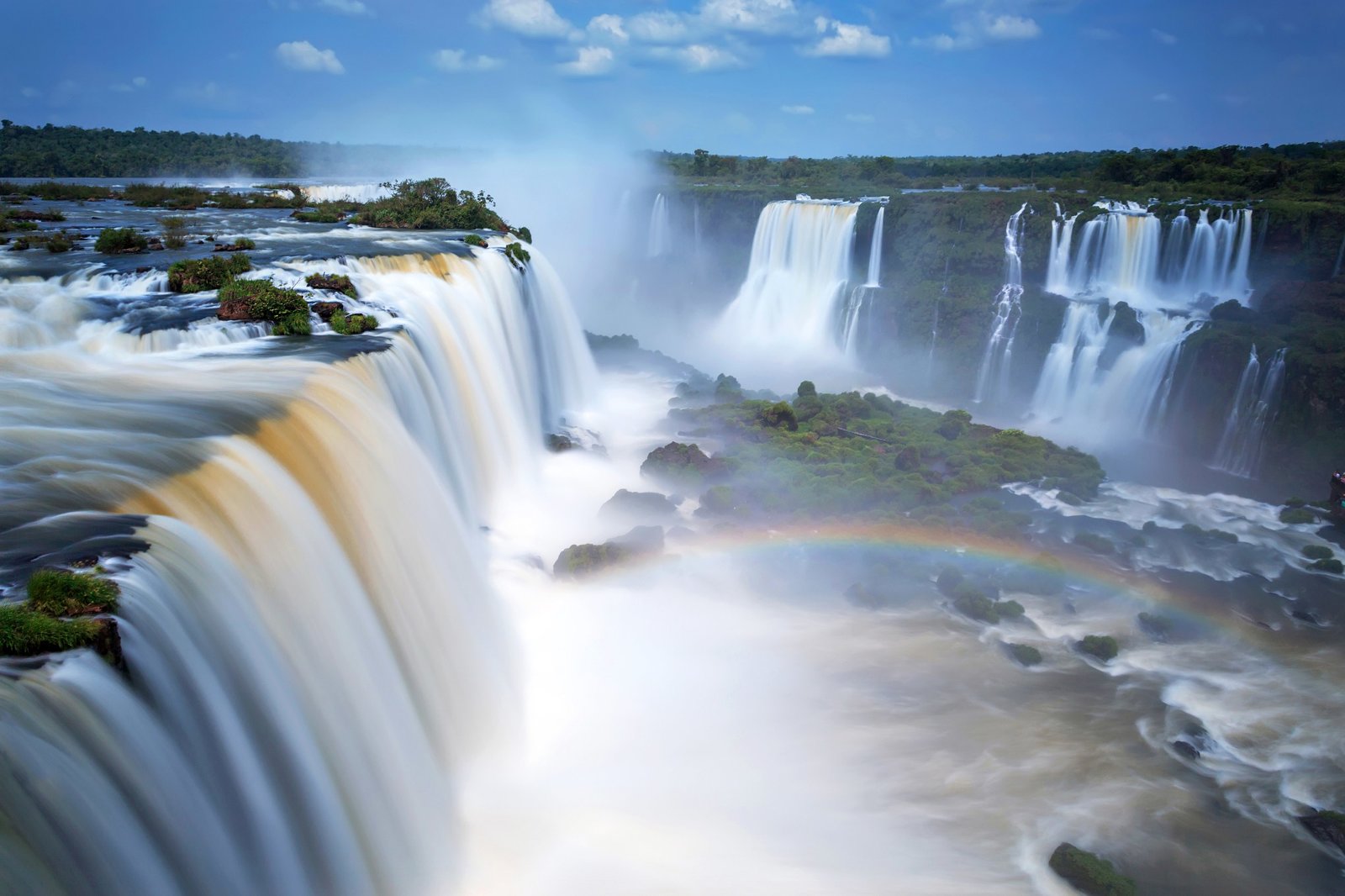 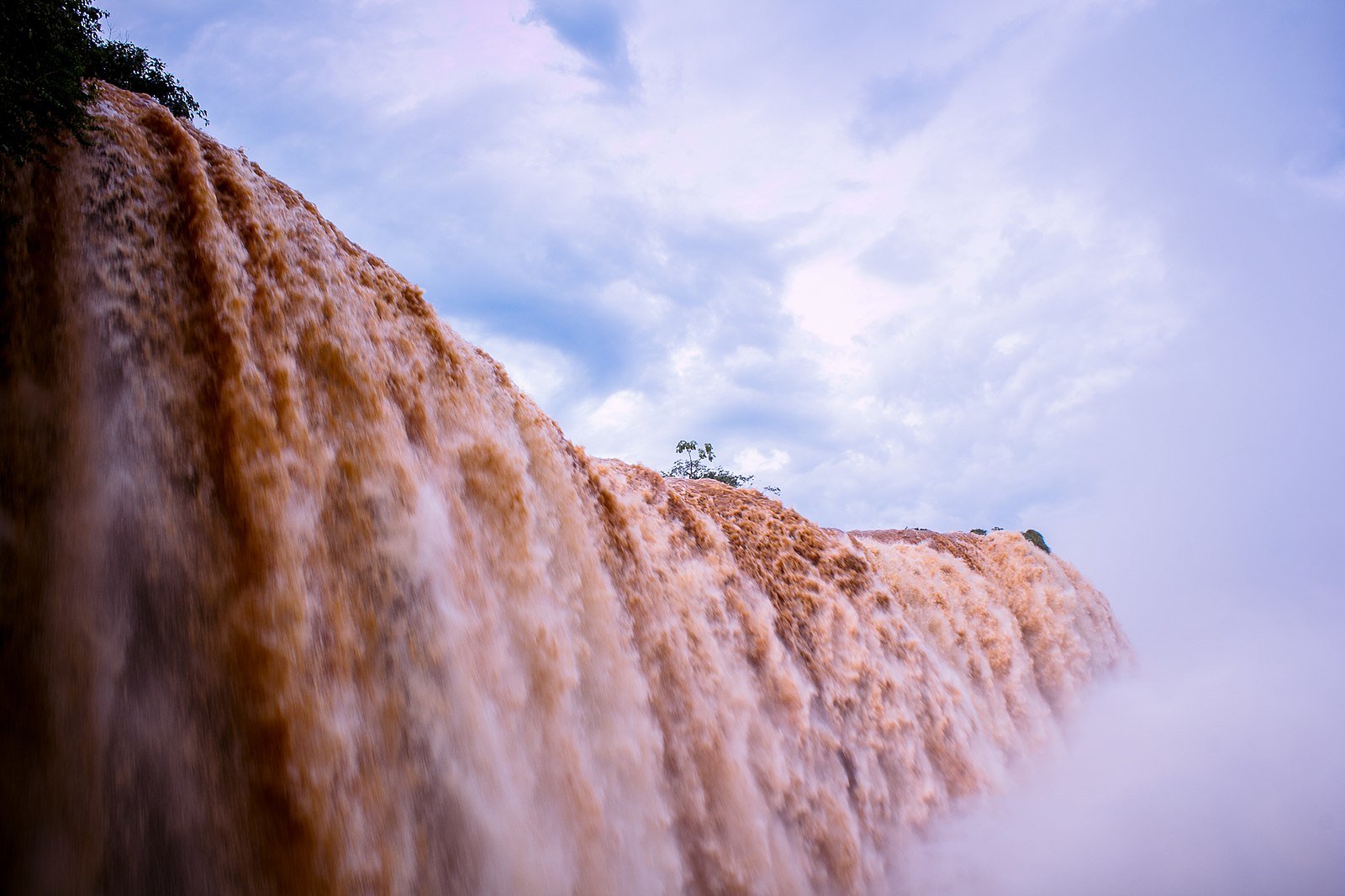 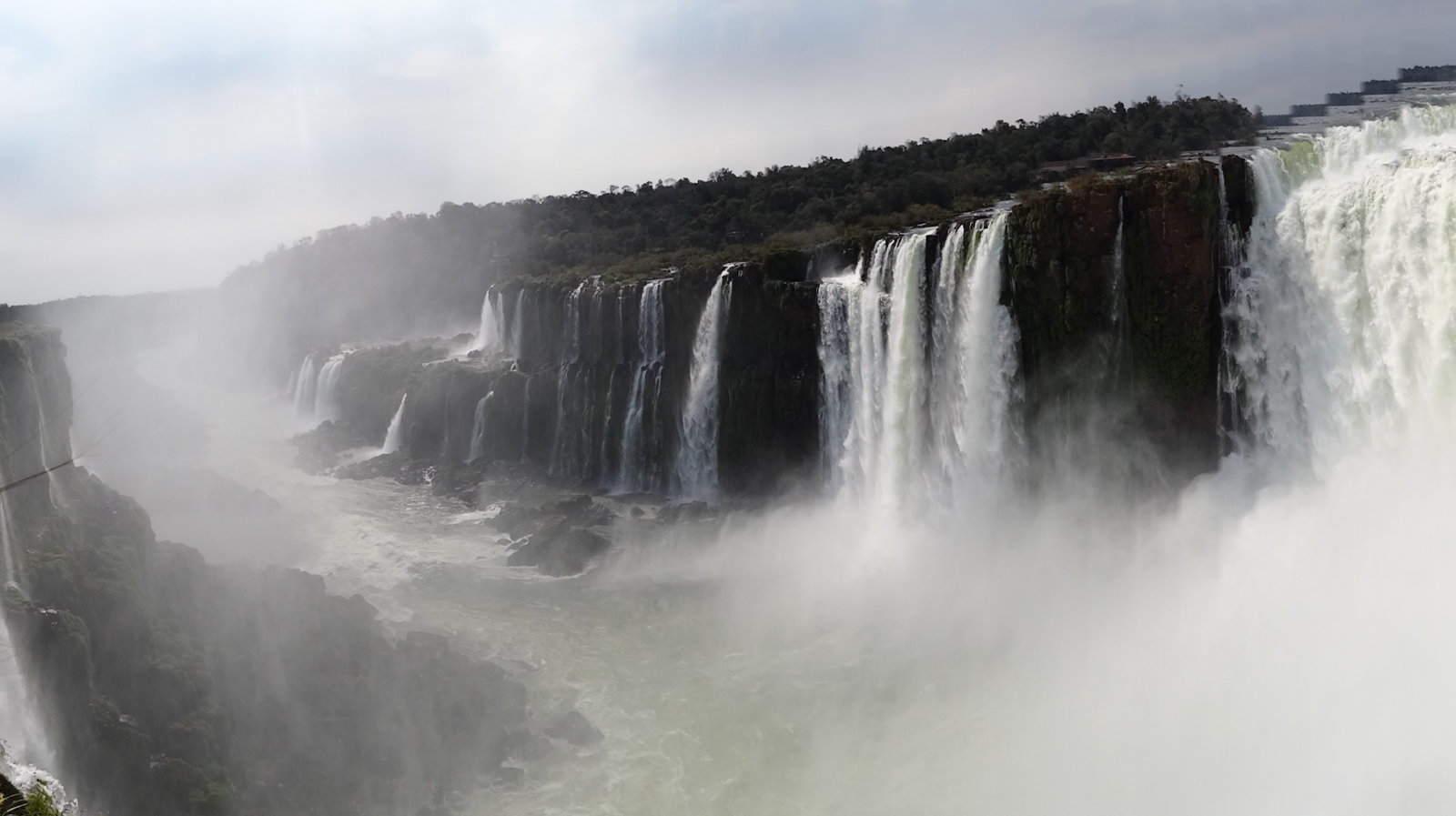