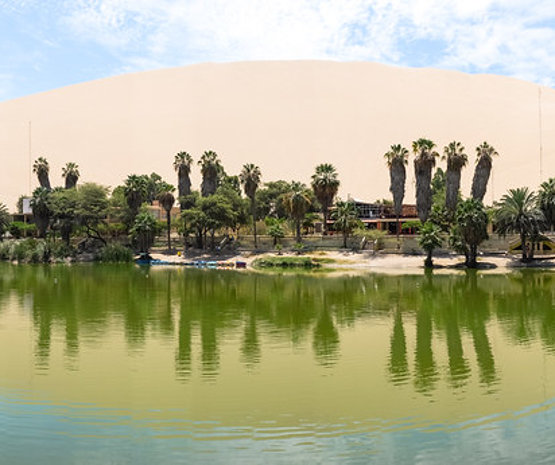 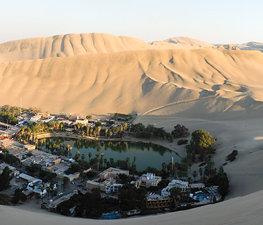 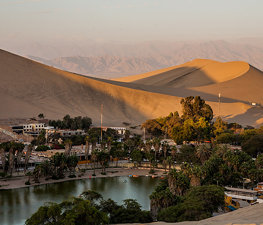 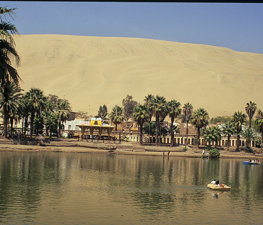 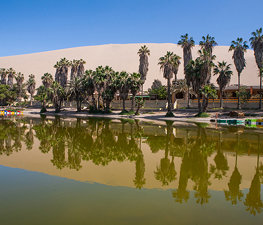 Huacachina (from Quechua wakachina guard, conceal, possibly shortened from wakachina qucha meaning 'hidden lagoon') is a village built around a small oasis and surrounded by sand dunes in southwestern Peru. It is about five kilometers from the city of Ica in the Ica District of Ica Province. The oasis was introduced as a feature on the back of the 50 nuevo sol note in 1991. Huacachina has a permanent population of around 100 people, although it hosts many tens of thousands of tourists each year.

Huacachina is built around a small natural lake in the desert. It is commonly referred to as the "oasis of America", it is a resort geared to local families from the nearby city of Ica, and increasingly as an attraction for tourists drawn by the sports of sandboarding on the sand dunes that stretch several hundred feet high. Other popular activities include dune buggy rides on buggies known locally as areneros.

According to local legends, the water and mud of the area is therapeutic. Both locals and tourists often bathe in the waters or cover themselves with the mud in an attempt to cure ailments such as arthritis, rheumatism, asthma and bronchitis.

Legend holds that the lagoon was created when a beautiful native princess removed her clothes to bathe, but after looking in a mirror she saw a male hunter approaching her from behind. Startled at the intrusion, she fled the area leaving behind her mirror which turned into a lake. Other versions hold that she fled, leaving the pool of water she had been bathing in to become the lagoon. The folds of her mantle, streaming behind her as she ran, became the surrounding sand dunes. The woman herself is rumoured to still live in the oasis as a mermaid.

The lake was created by natural seepage from the underground aquifers, but the increase in well-drilling started to threaten that supply in the early 2000's. To compensate for this loss, and preserve the oasis as an destination for tourists, local business groups began pumping water into the lake in 2015.

It was announced in 2016 that the Peruvian scientist Marino Morikawa, who created a nanobubble system to decontaminate lake El Cascajo, will lead a project to restore the Huacachina lagoon.

Buggies and sand dunes of Huacachina, near Ica, a city in Peru — sandeepachetan.com @ Flickr

Bogdan D.
One of the nicest oasis I've ever seen - it really looks like you'd imagine; don't miss the desert buggy tours and sand gliding; very close to the city of Ica;

Xim Tog
Beautiful spot! Must see! Oasis is peaceful, you can sandboard and there is a very chill vibe about this oasis. Don't miss the buggy tour at sunset time.

Cassandra Tomkin
The sandboarding is amazing, but don't miss the wine & pisco tours!

The Paracas Candelabra, also called the Candelabra of the Andes, is a

Cahuachi, in Peru, was a major ceremonial center of the Nazca culture

Terjit (Arabic: ترجيت‎) is an oasis (in the proper sense: a dese 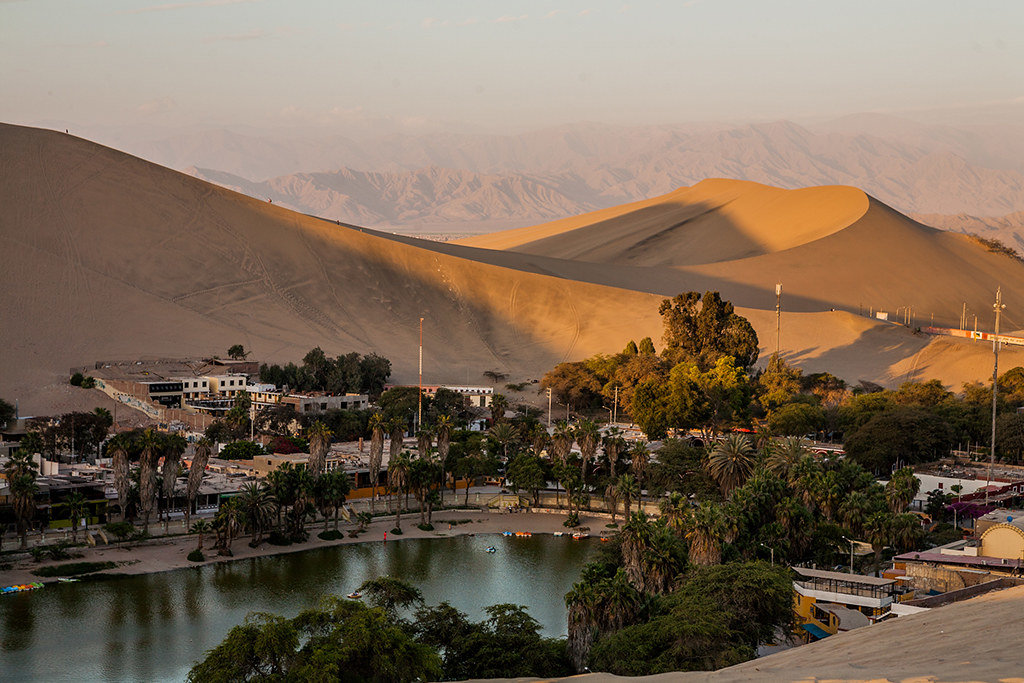 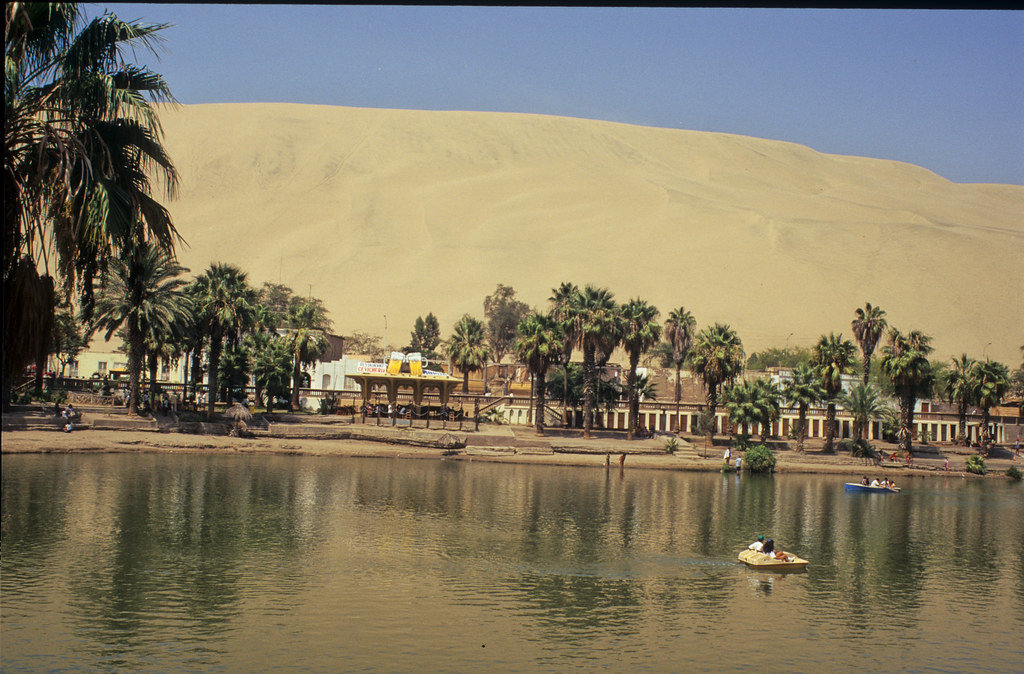 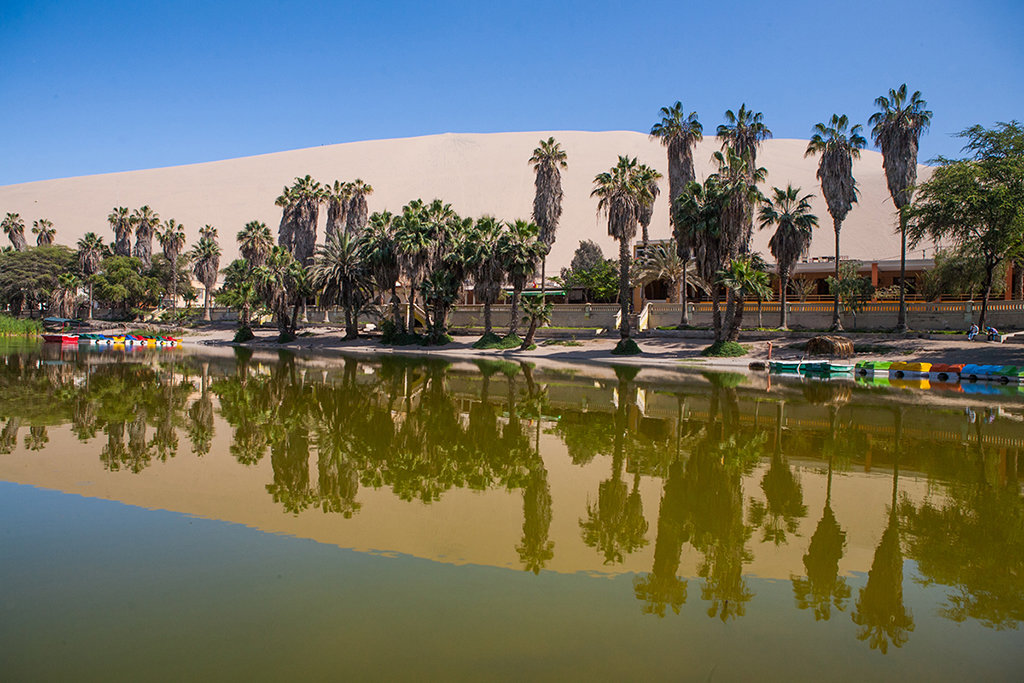 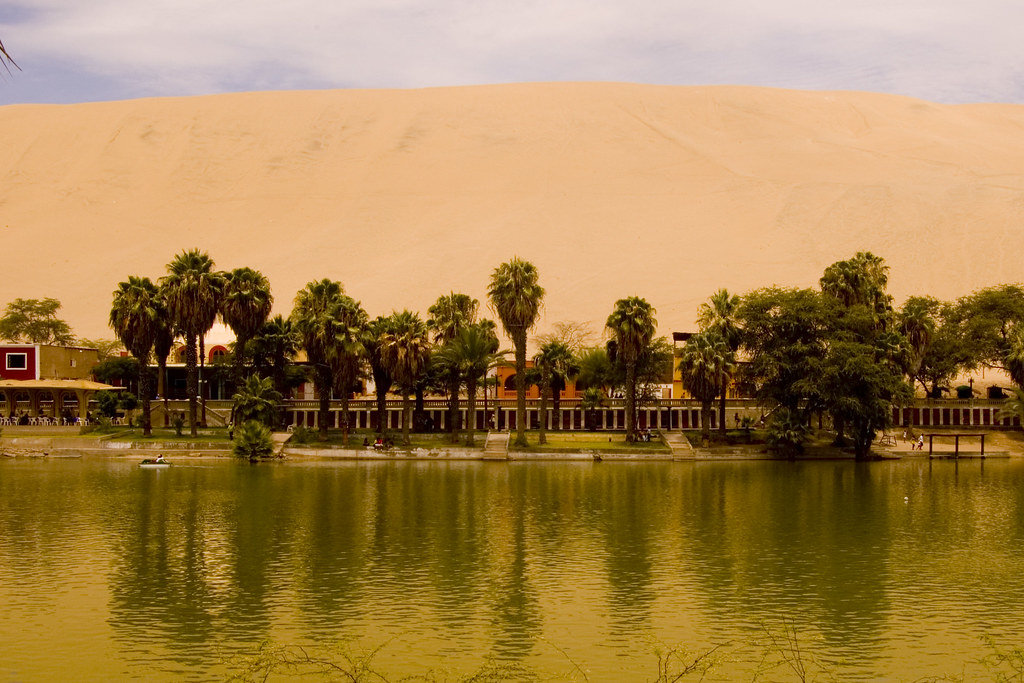 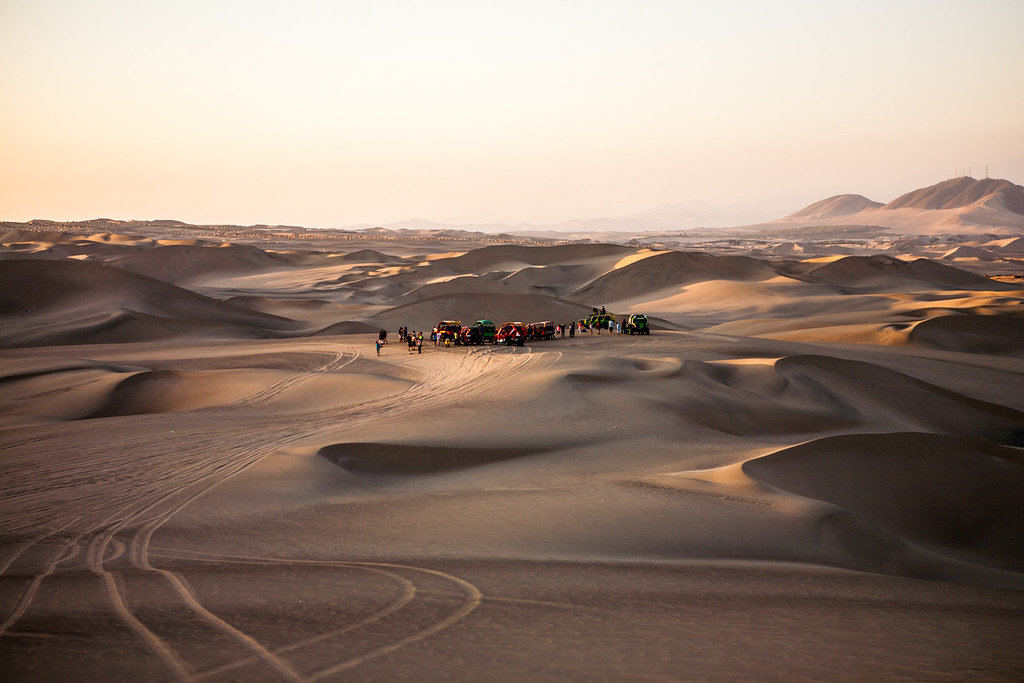 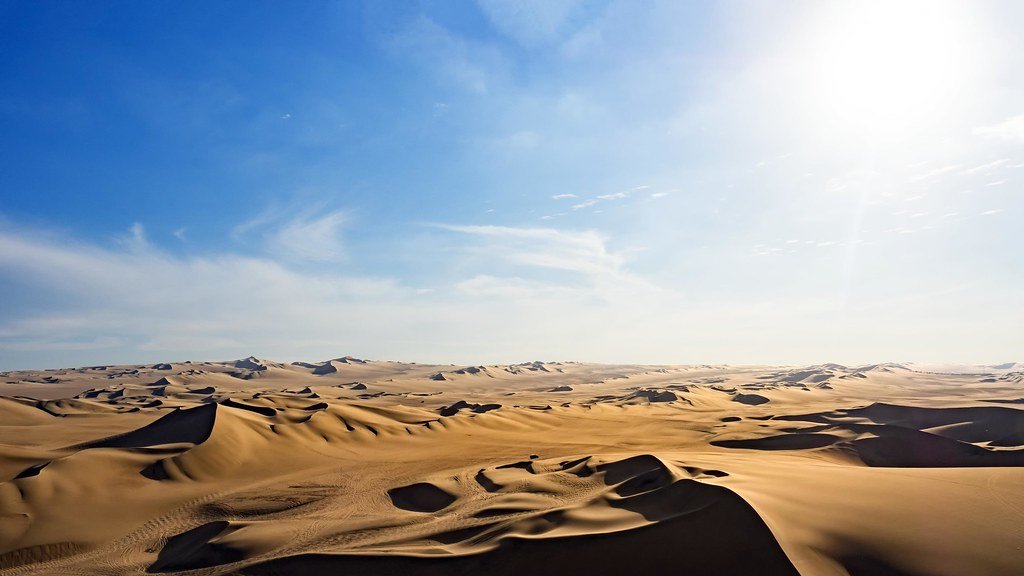 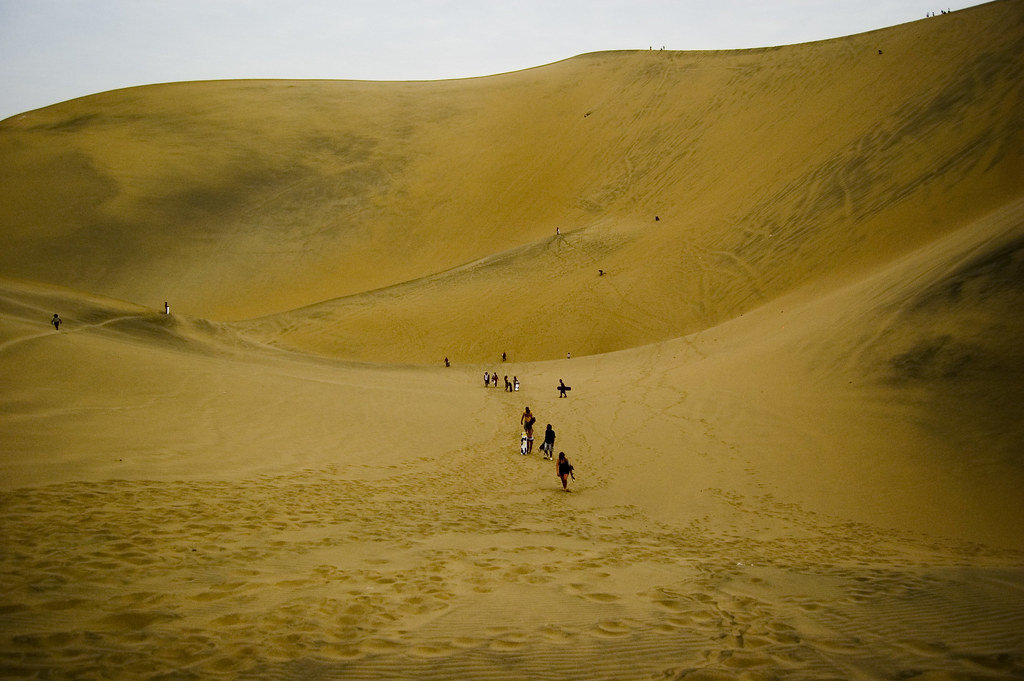 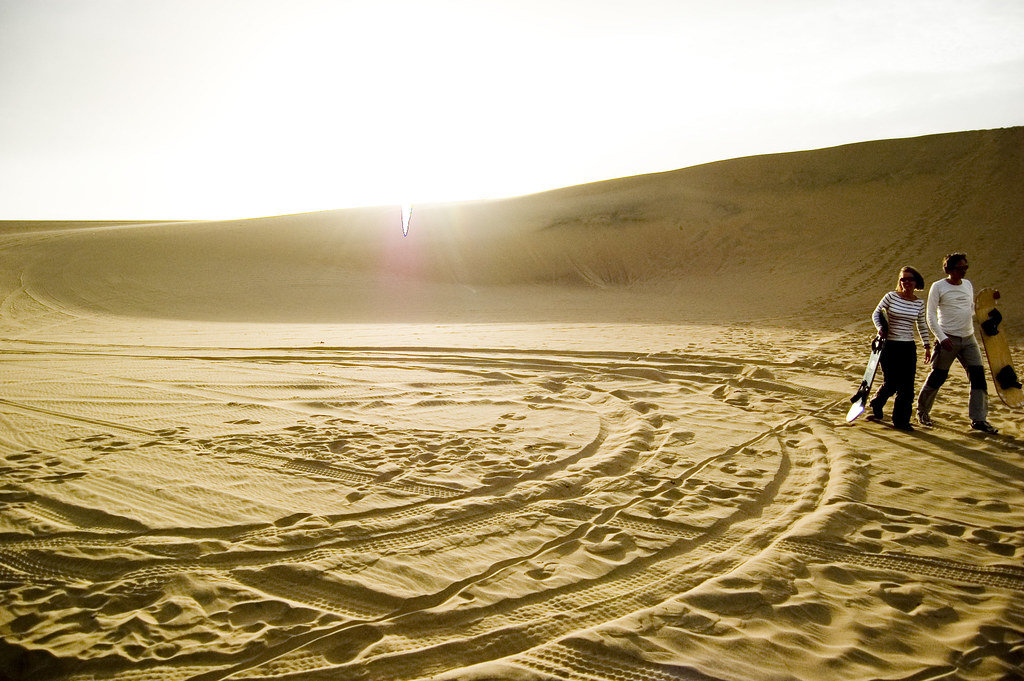 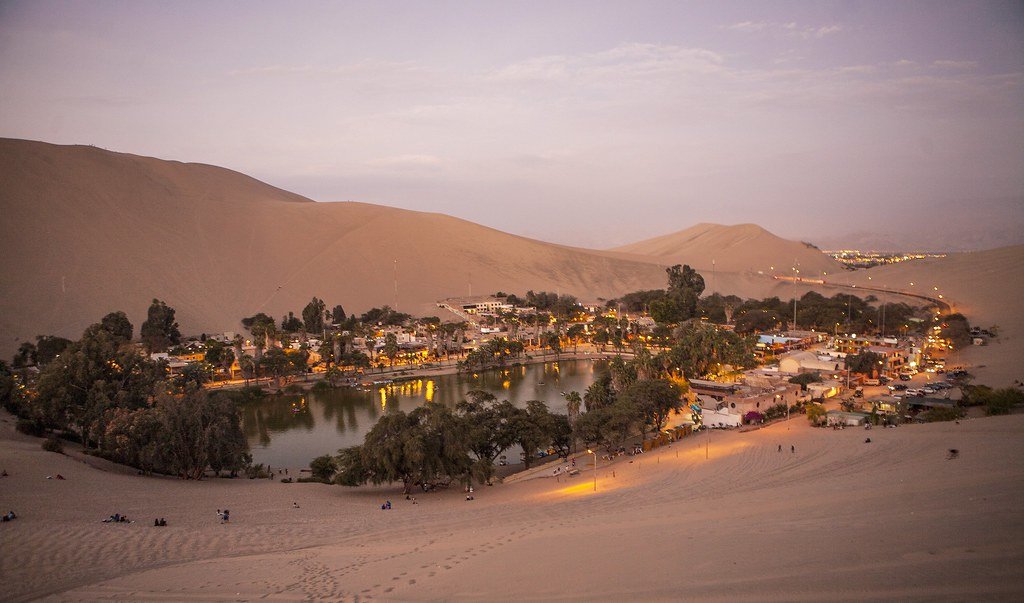 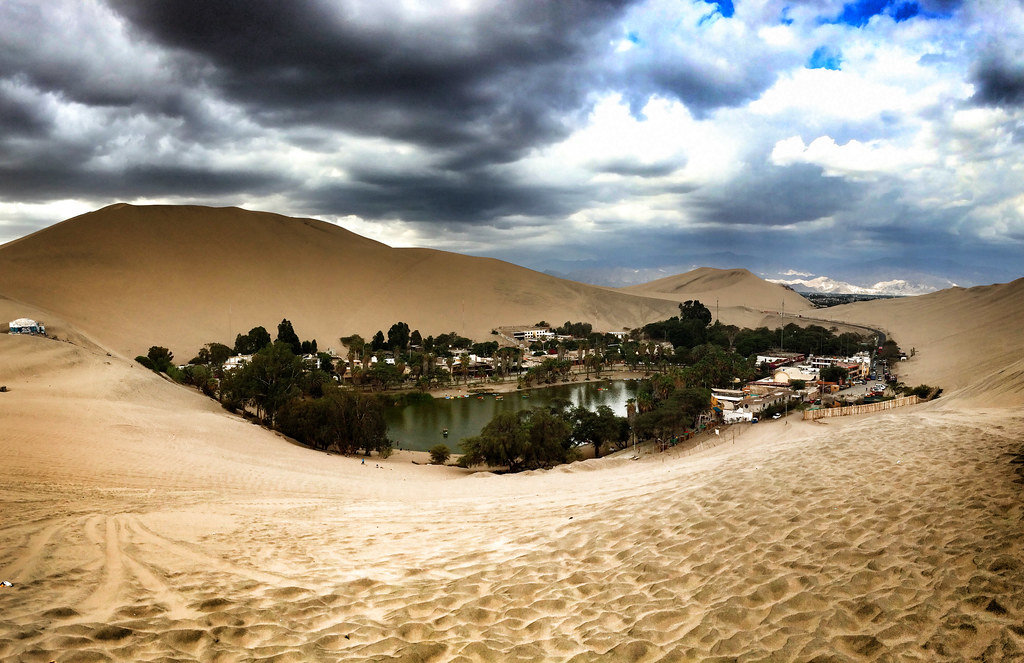 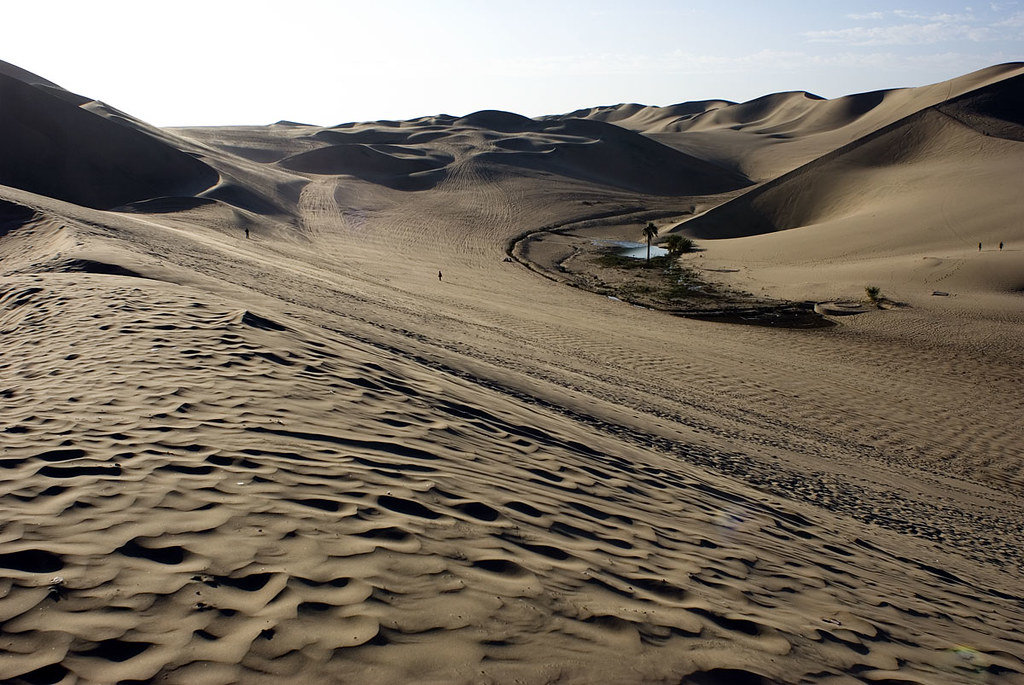